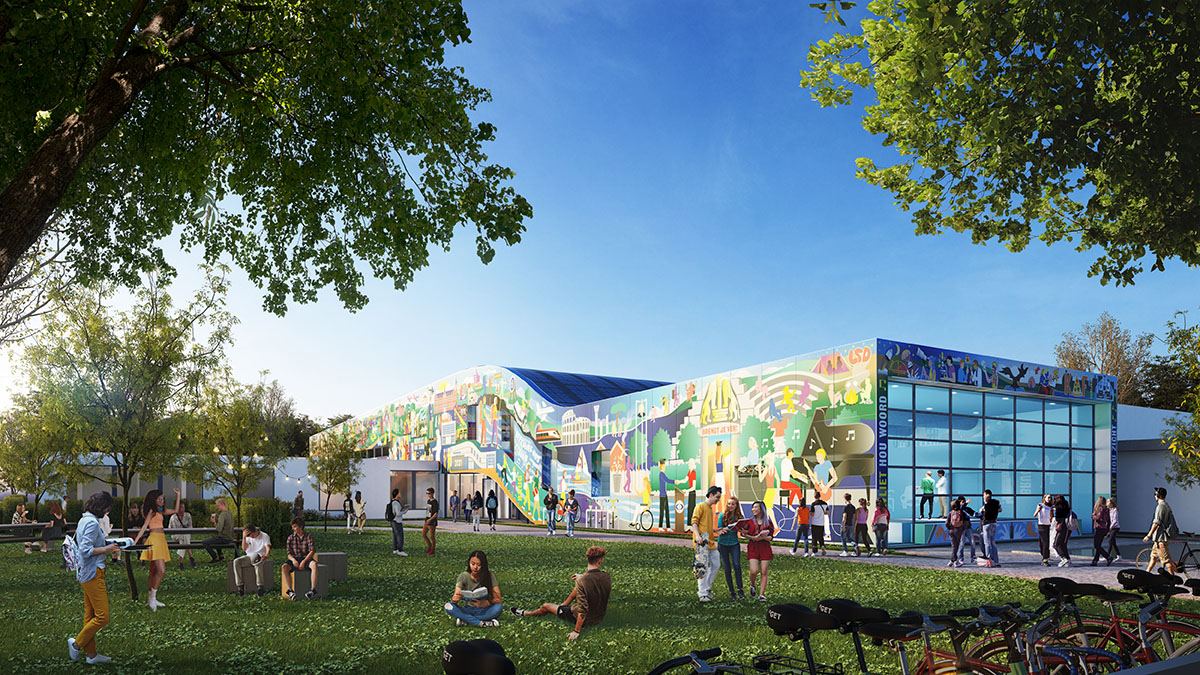 MVRDV founding partner Winy Maas and Theobert van Boven of Van Boven Architecten, two alumni of the Gymnasium Beekvliet, will transform their old secondary school in the Dutch village of Sint-Michielsgestel, the Netherlands.

The new plans include the renovation of the existing building, extending its lifespan, and the design also adds a colourful, flowing addition that reaches out into the school’s plaza, which functions as an auditorium.

This swooping form of the new auditorium is considerably aimed to improve circulation, creating a new focal point at the heart of the building.

The façade features an exhibiting artwork designed by visual artist Ian Kirkpatrick, the addition becomes a new focal point for the school’s activities. The completion of the transformation is scheduled for July this year. 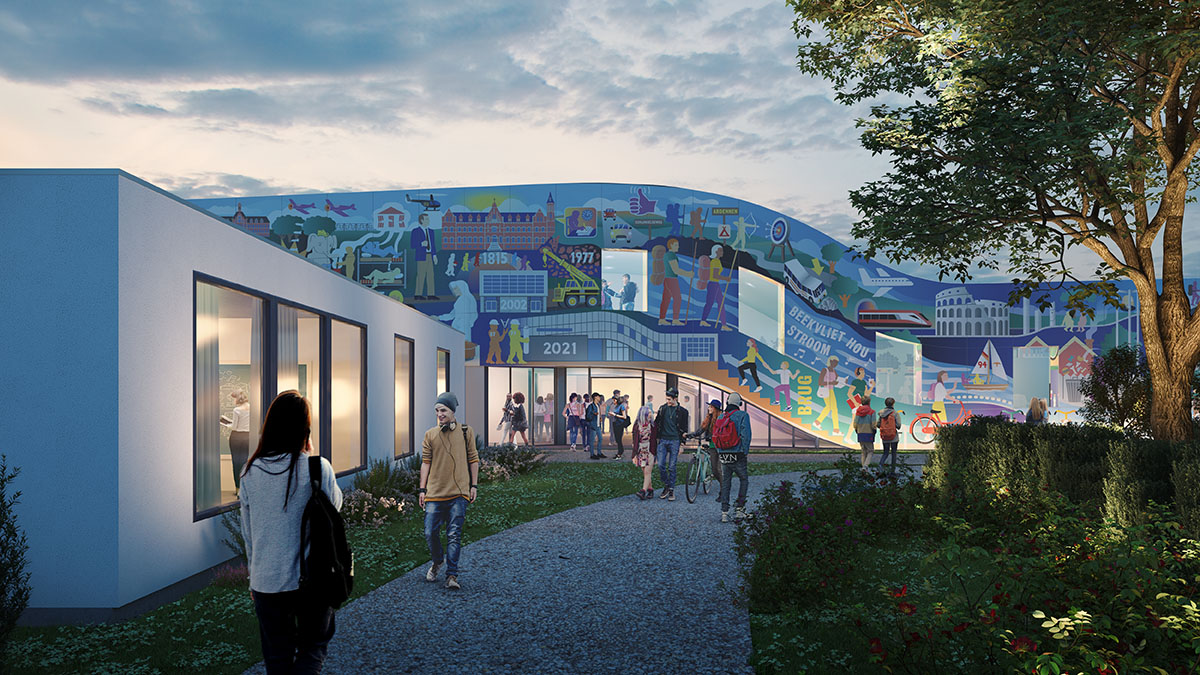 In the project brief, a new auditorium, more space for regular school activities, and additional art and culture facilities needed to provide students to stimulate learning environment while offering them more spaces to meet and gather.

To achieve this, the new addition extends an existing roof structure, lowering it to ground level, thus bringing the building’s circulation routes in one way flowing move, while creating an eye-catching element at the entrance to the school.

The auditorium, made of a swooping, incorporates a tribune forming an auditorium to act as a focal point for school activities, as well as an adaptable stage and a kitchen.

While the building’s entrance remains in the same location, the new design reconfigures it, with the main door now nestled underneath the curve.

The resulting proposal is aimed to draw pupils, teachers, and visitors directly into the heart of the building and the life of the school. The new extension is painted entirely in blue, and the entrance creates a "heaven" in the school.

The exterior walls of this curved addition feature artwork by the renowned London-based Canadian visual artist Ian Kirkpatrick, taking references from the memories and experiences of pupils and former pupils, as well as references to the surroundings and the school’s history. 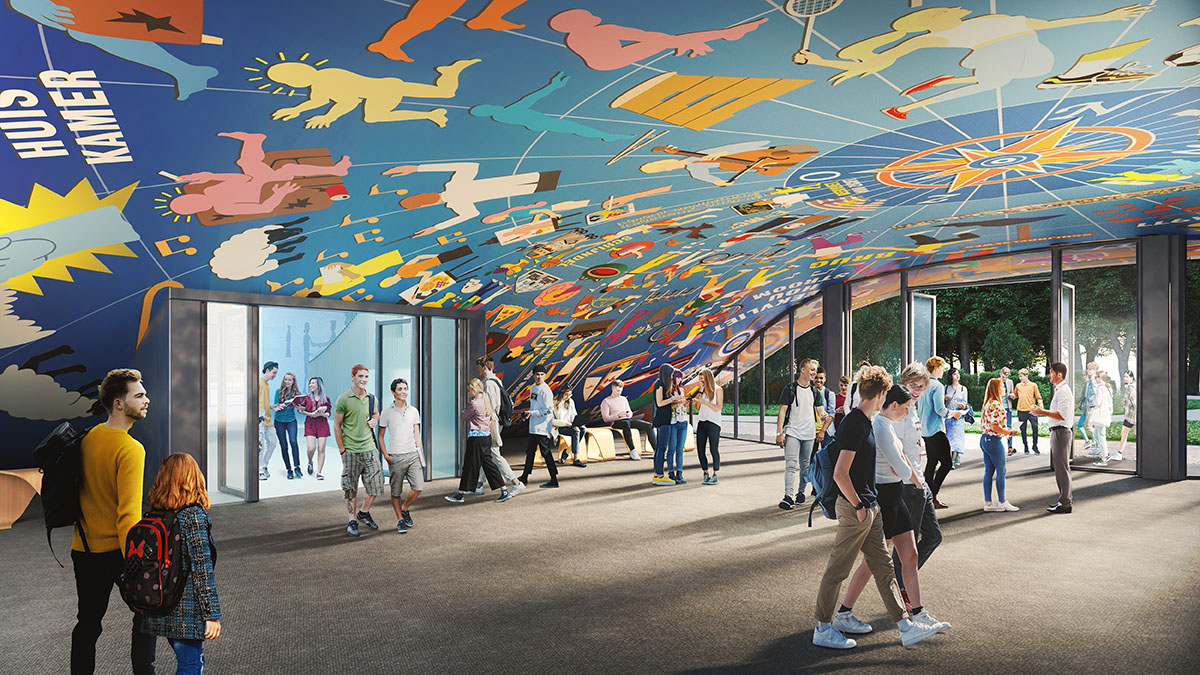 The illustrations are positioned using a computer scripting technique that links each one to its geographic location.

"It's fantastic to work on a building with which I have such history. This school shaped me strongly – it's a former catholic seminary that transformed into a hip gymnasium and it gave me, coming from a village, a cosmopolitan perspective," said MVRDV founding partner Winy Maas.

"I also think it is great that memories of students, from the past and present, are represented in the mural. Actually, there is a piece of everyone in the region in this building. It really is a reflection of the whole of Sint-Michielsgestel and its surroundings."

"I went to school at Beekvliet myself, as did one of my children, and my wife is also a teacher there. These connections strongly motivate me to design a unique and special building that does justice to the school’s rich history," said architect Theobert van Boven.

"The auditorium with its curved shape, the printed façade, and the view of the pond that is characteristic of Beekvliet mean that this school will now also be located in a building that matches its stature." Gymnasium Beekvliet is not the first time Maas has worked in his home region. Also designed with Van Boven Architecten, Sint-Michielsgestel’s Green Villa, with a façade of green shelves lending it a soft, leafy exterior, is currently gearing towards a planning application.

Earlier, Maas designed The Glass Farm in his home, the neighbouring village of Schijndel.