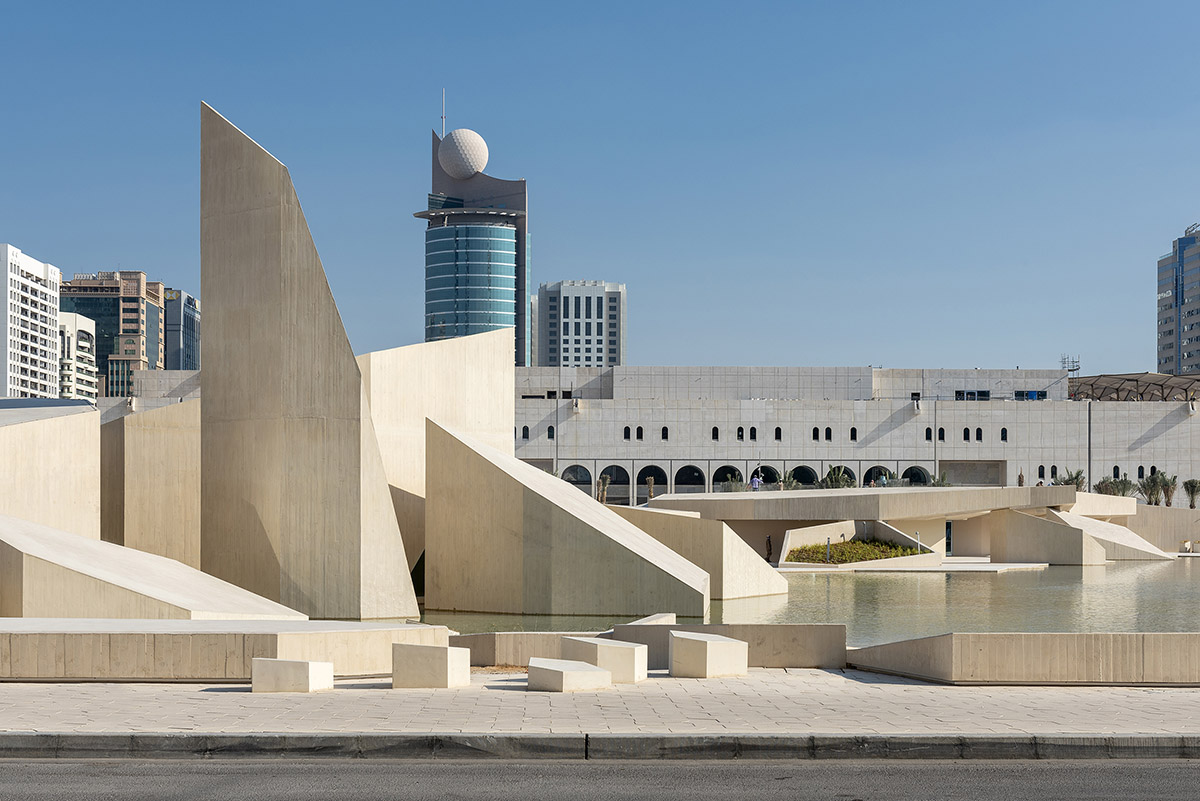 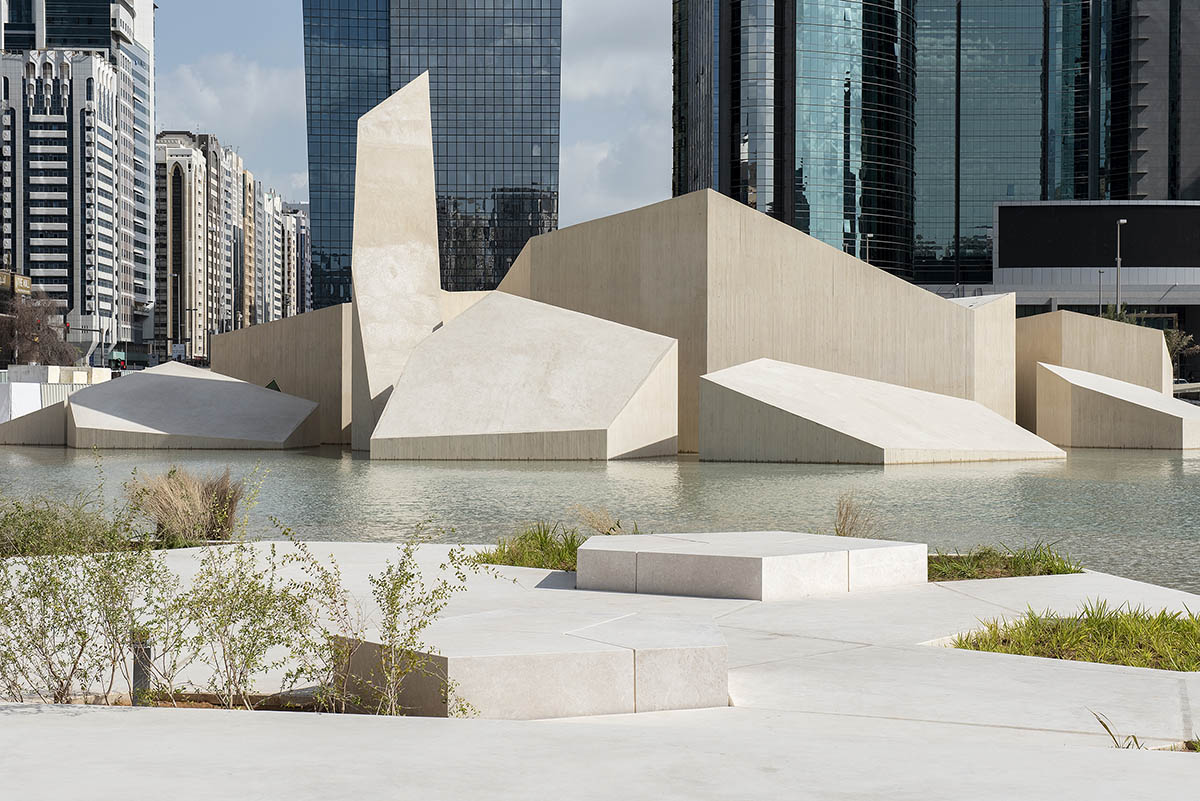 Commissioned by the Department of Culture and Tourism Abu Dhabi in 2016, CEBRA has introduced a new type of locally rooted urban landscape, taking inspiration from Abu Dhabi Island’s coastal landscape of sandbars, mangroves, and the salt flats’ distinctive cracked patterns. The project draws connections between the centre of today’s metropolis and the natural setting from which it emerged.

The masterplan combines modernity alongside the Emirate’s maritime and desert heritage in a coherent narrative that communicates between the site’s two contrasting buildings. 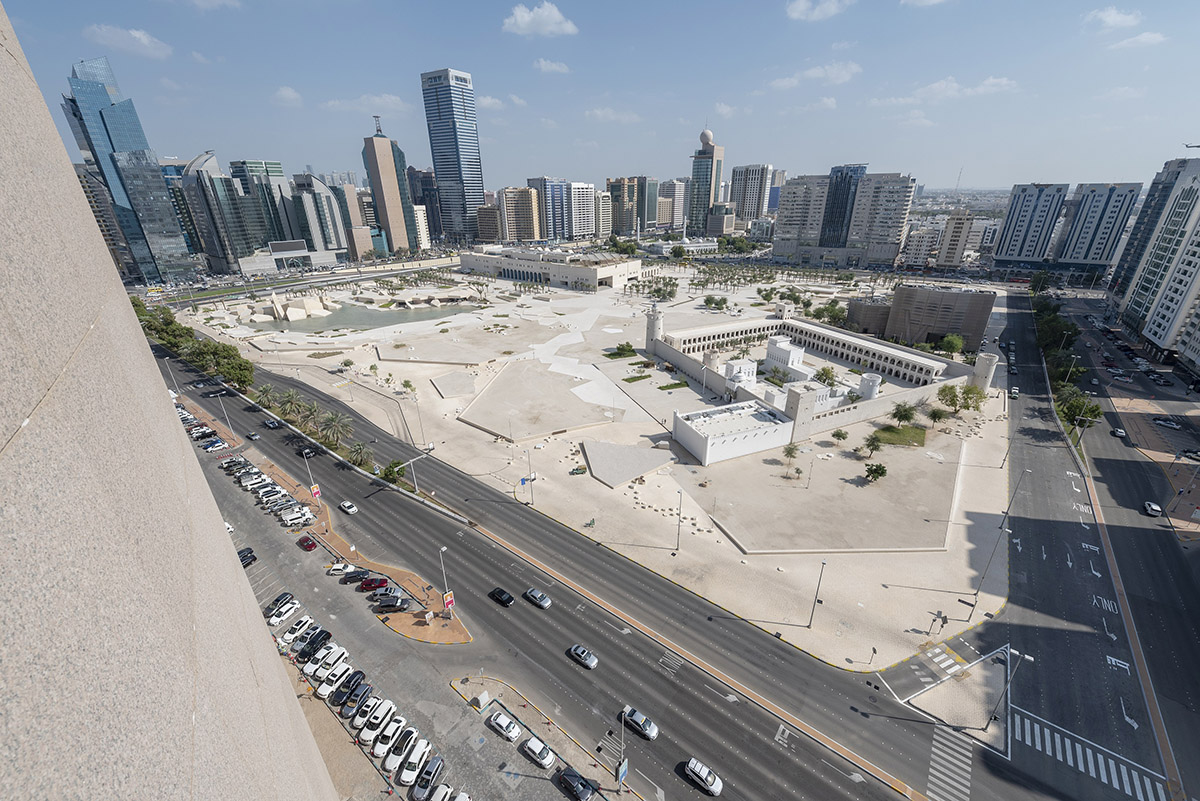 The Qasr Al Hosn is the city’s oldest and most important building. Originally built in 1760 as a watchtower to protect the only freshwater well on Abu Dhabi Island and later extended into a palace, it literally constitutes the birthplace of the modern metropolis.

The aim of the transformation masterplan has been to reinstate the fort as the cultural heart of the city with a new 140.000 sqm cultural park-scape and to conserve both the site surrounding the fort and the city’s Cultural Foundation - a 1980’s listed cultural centre of Bauhaus origins – which also sits on the site. Introducing a new type of locally rooted urban landscape the project combines modernity alongside the Emirate’s maritime and desert heritage in a coherent narrative that communicates between the site’s two contrasting buildings. 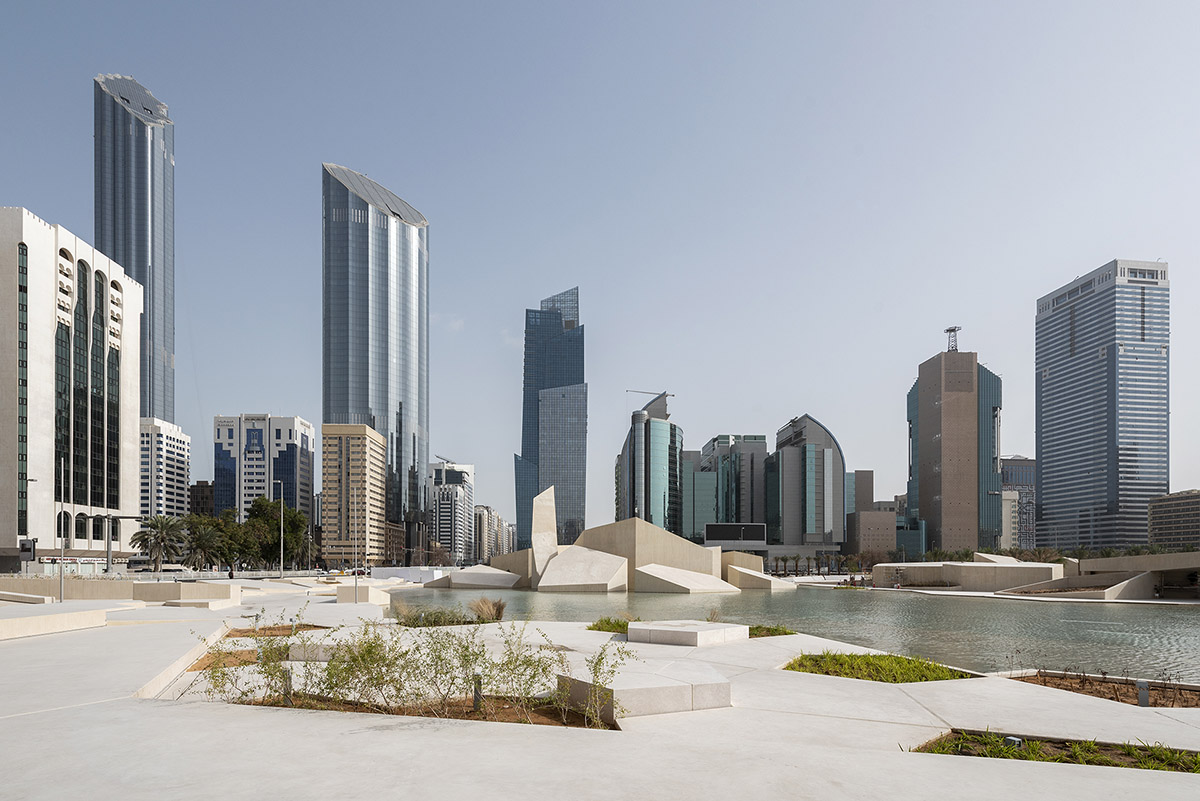 Today the site is transformed into a vivid public park, which enhances the two historic buildings as important landmarks in the city.

Simultaneously, the project adds several new functions to the Al Hosn site making it an asset to the entire city of Abu Dhabi – restaurants, facilities for cultural activities, a breath-taking prayer hall, and an impressive open landscape with water features and shady pocket spaces for relaxation in the Middle Eastern sun. 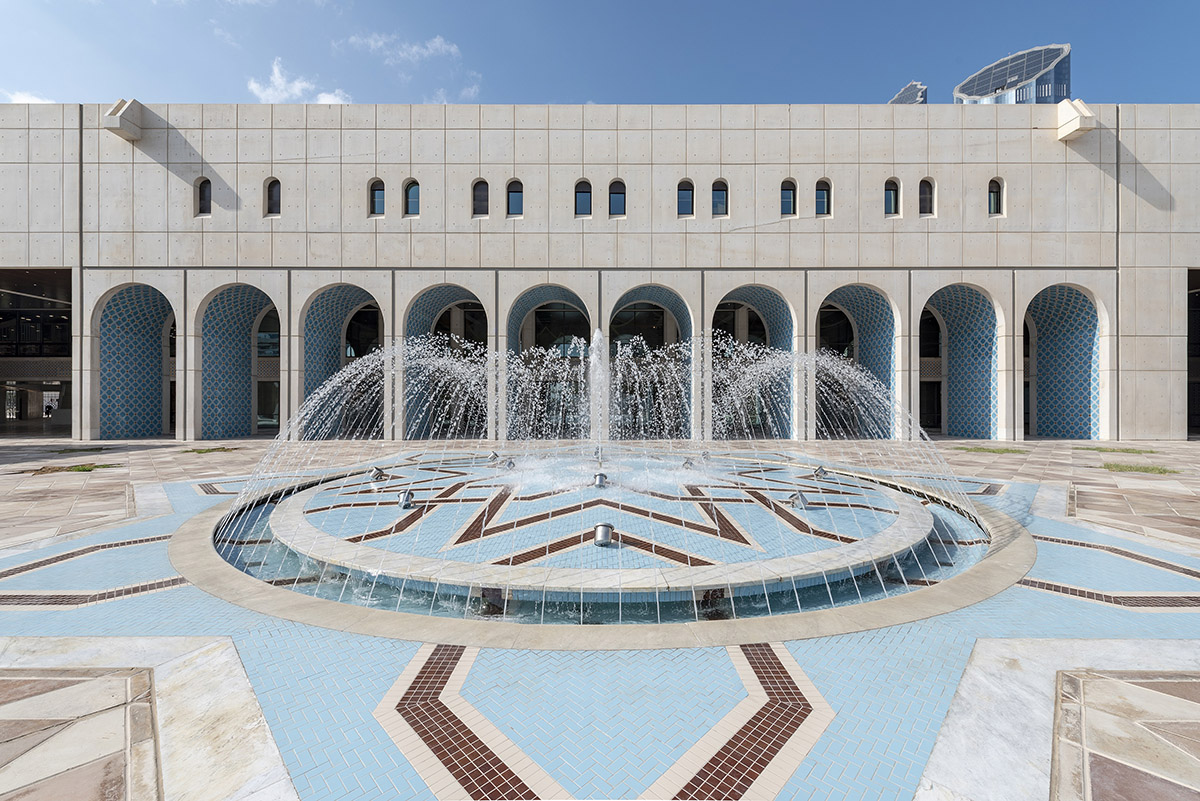 The project emphasizes its own duality by dividing the site diagonally into two contrasting landscapes. A plain and open desert-like landscape around the Qasr Al Hosn Fort reinstates the building as a free-standing landmark on sand like it was before the modern city rapidly sprung up. Opposite, a paved and programmed area with intensified planting surrounds the Cultural Foundation Building, thus combining the desert landscape with the modern city grid structure. 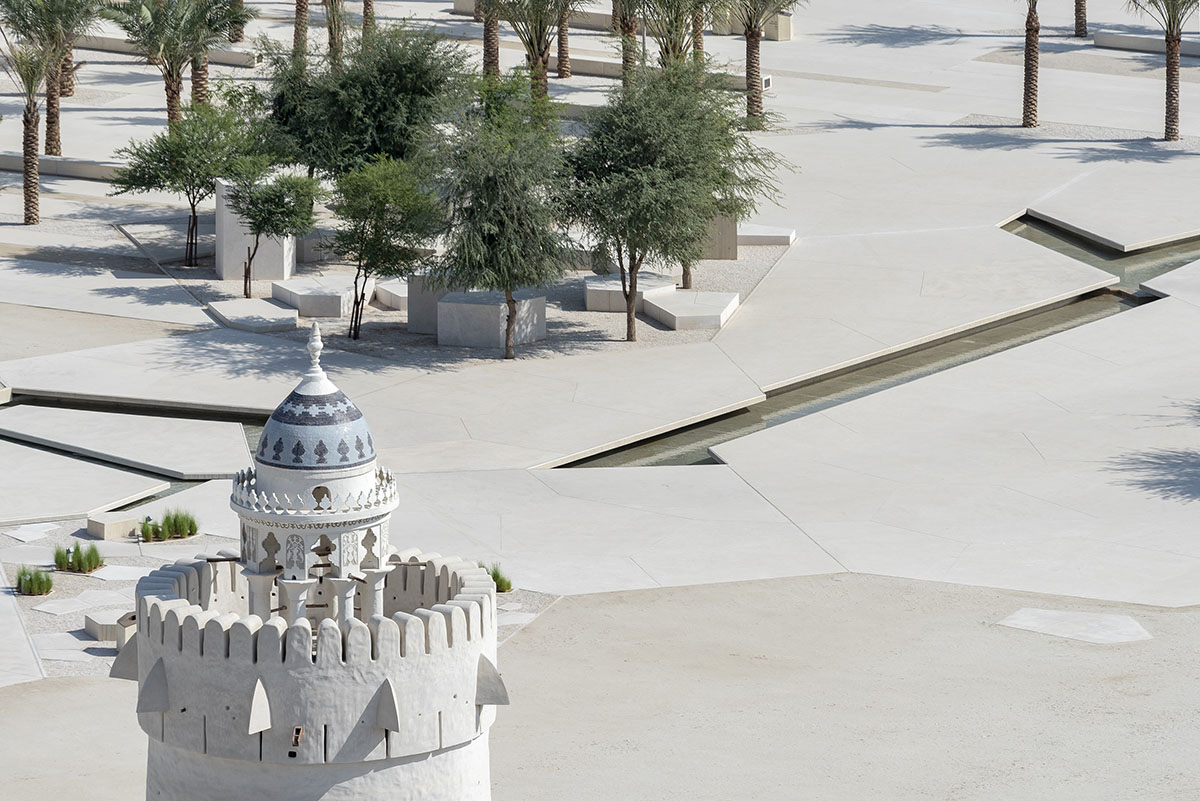 "The two landscapes are connected by a public urban space emerging from formations of ”cracks” and irregular geometric shapes. The central landscape area is defined through an organic pattern known as a ‘Voronoi’," said CEBRA.

"The design articulates an architectural interpretation of Abu Dhabi Island’s coastal landscape of sandbars, mangroves, and the salt flats’ distinctive cracked patterns, drawing connections between the centre of today’s metropolis and the natural setting from which it emerged." 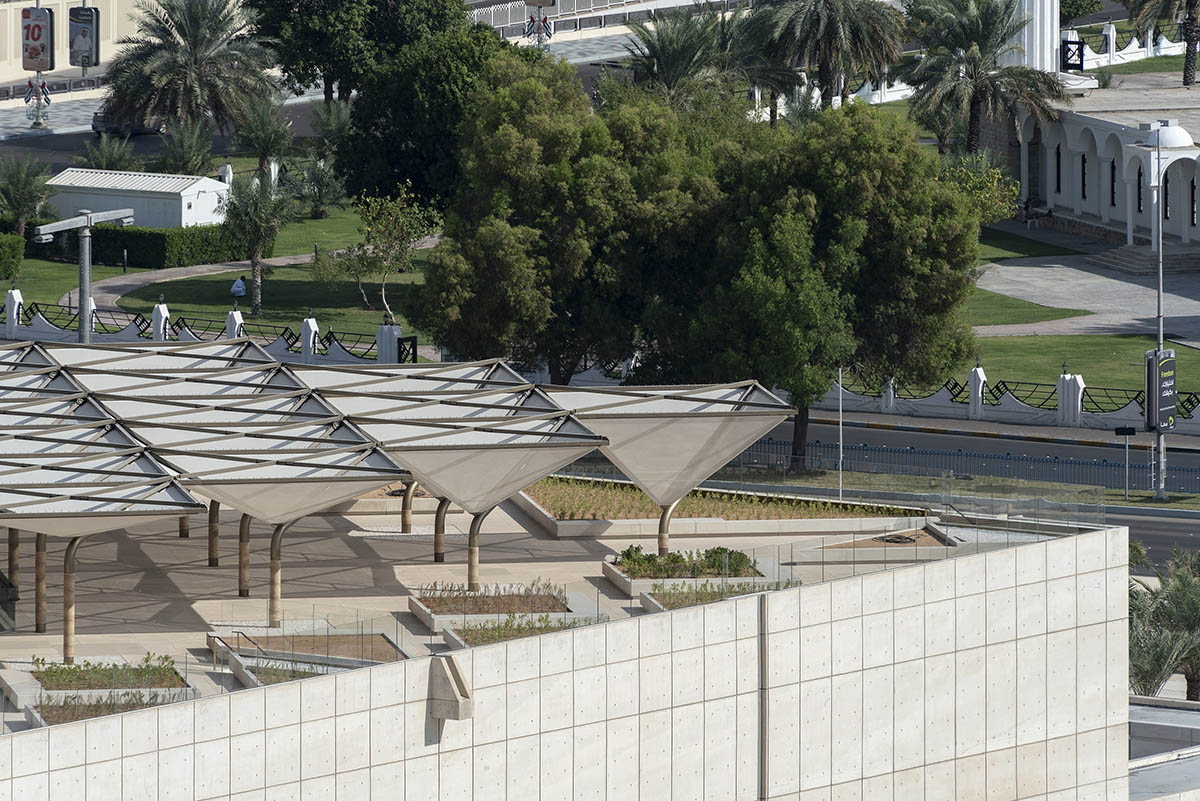 The geometries of the urban landscape intentionally land somewhere between building and landscape, with the tone of the concrete matching the colour of the natural sand.

Along the transitional zone, the landscape changes from horizontal planes to slanting surfaces that gradually grow into actual buildings for food and beverage facilities, ancillary functions, and culminating with a Musallah prayer hall at the north-eastern corner of the site. 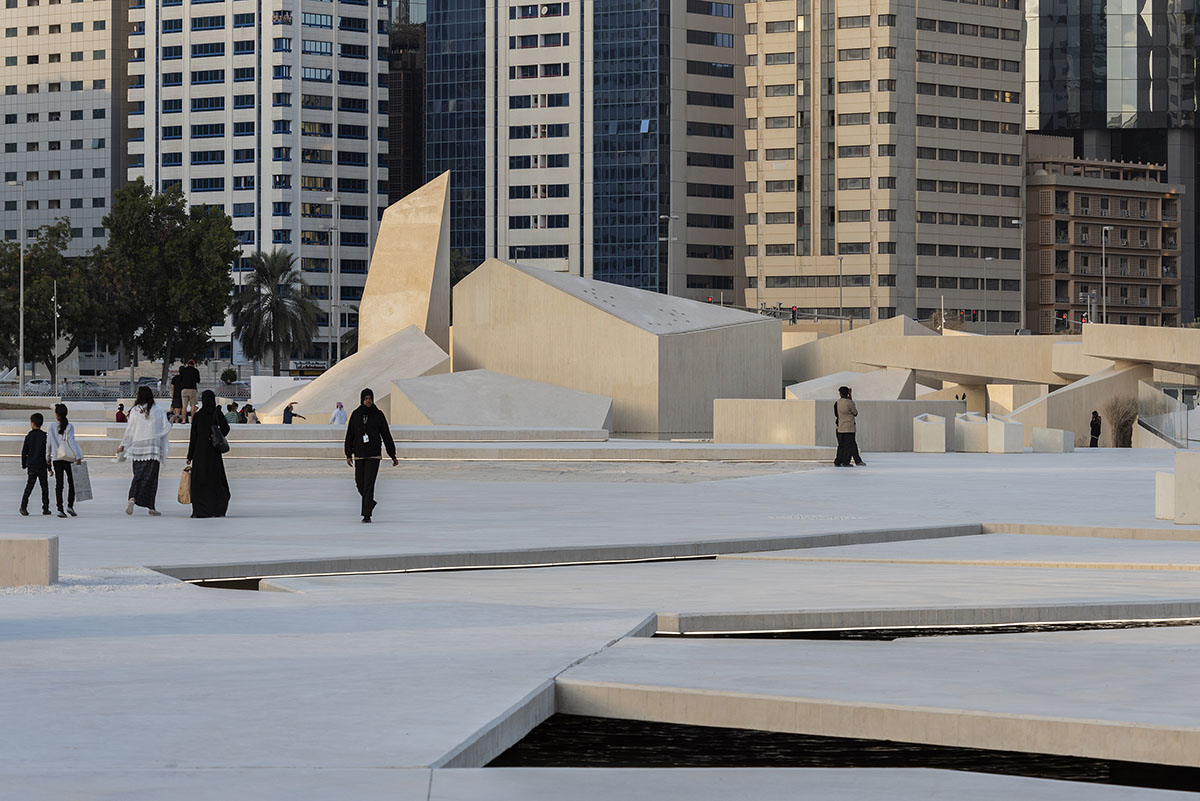 All components - from sitting bollards, surface patterns, lighting concept, and building volumes to the interior’s floor plans, doorways, and furnishings - are subtly integrated into the overall urban landscape topography and merge with the park to be experienced as natural landscape elements. Thus, the landscape emphasises the Fort and the Cultural Foundation as the main visual anchors.

Water constitutes a natural focal point in the design of the Al Hosn landscape - both for its cultural significance, as an integrated element in the overall design narrative, as a natural cooling element for the project’s microclimate, and to present solutions for minimizing water consumption within the public park – i.e., by using native desert plants with low water consumption and to use grey wastewater from the local area when watering the park. 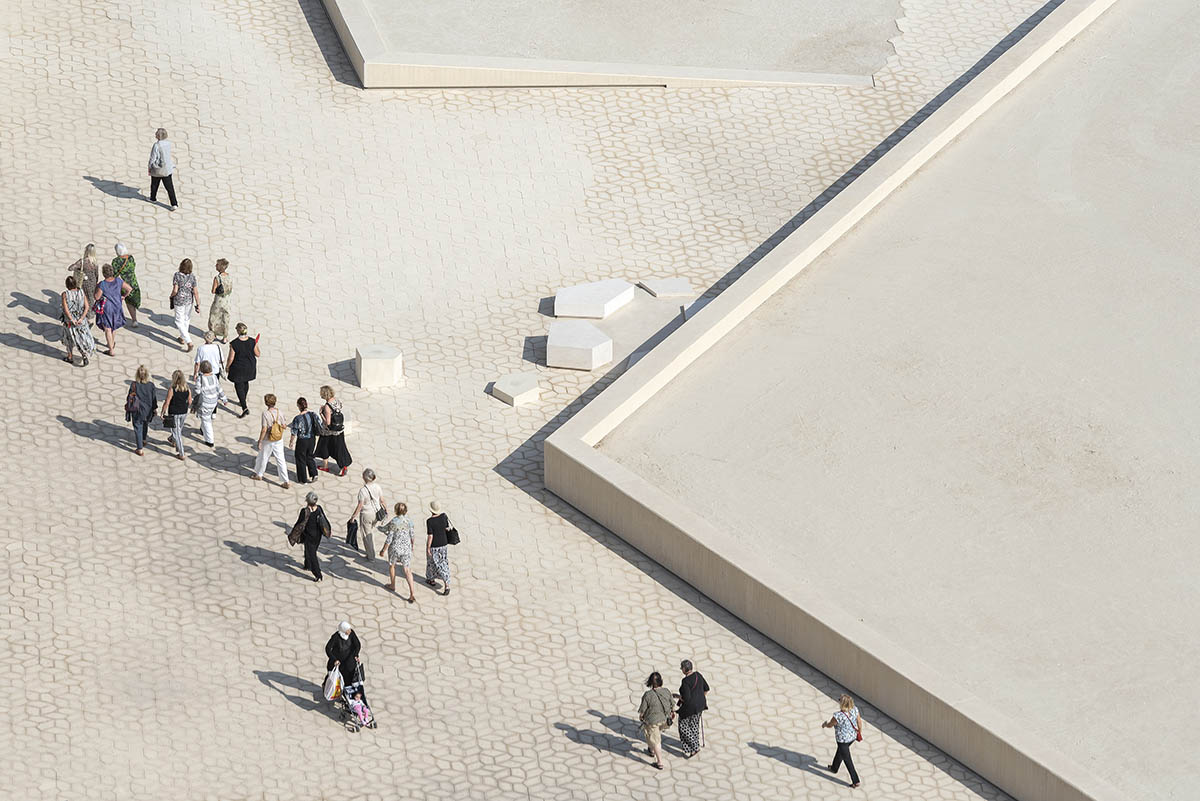 The park-scape’s central zone integrates a series of water features that run from south to north, breaking out of the distinctive pavement’s irregular geometries as narrow creeks, canals, streams, and underground passages that transform into large water feature around the Musallah prayer hall.

Instead of landscaping a traditional urban park of lush vegetation that would require comprehensive irrigation and maintenance in a desert climate, the project aims at creating a locally anchored park aesthetic characterized by the use of local materials and indigenous, hardy, sun tolerant plants that require minimal irrigation. 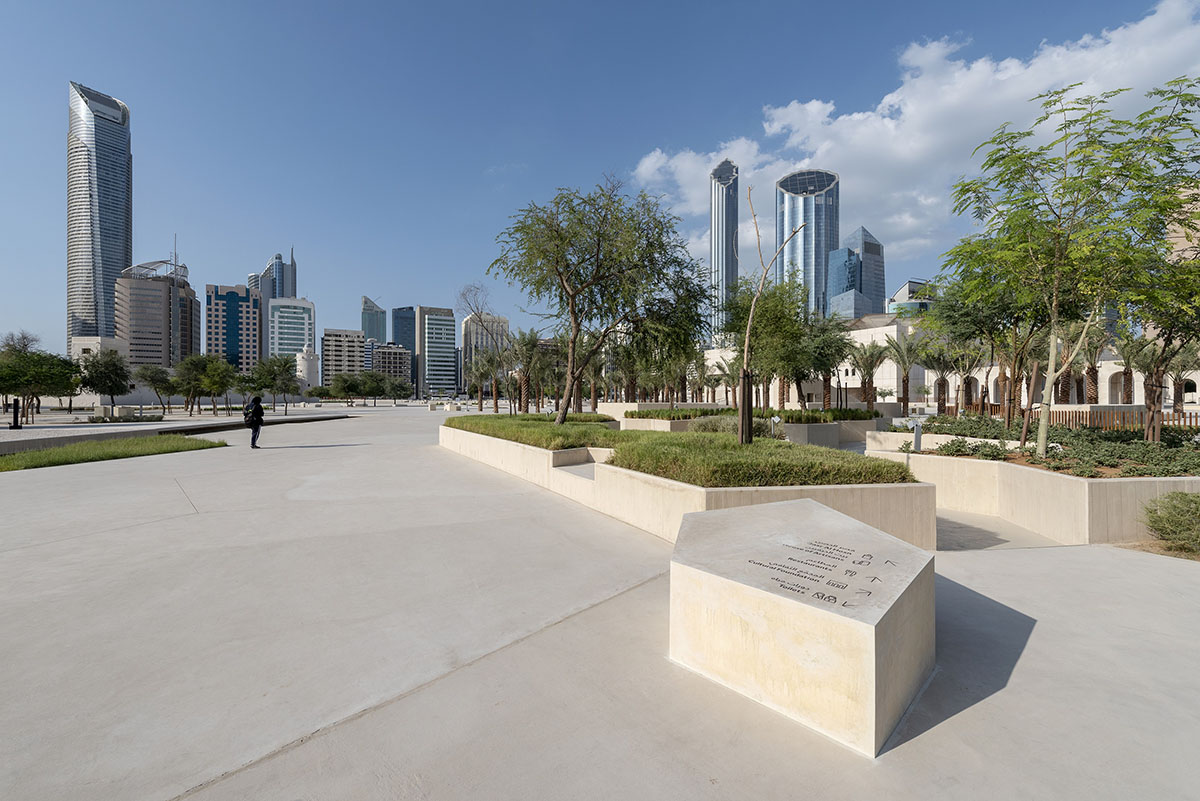 The Al Hosn site introduces a meaningful flow through the city by interweaving paths across the site with the adjacent functions and the wider urban fabric, thereby promoting pedestrianism and acting as a dynamo for public life. This is supported by the park’s vegetation, which provides shade along the pathways and pocket spaces. 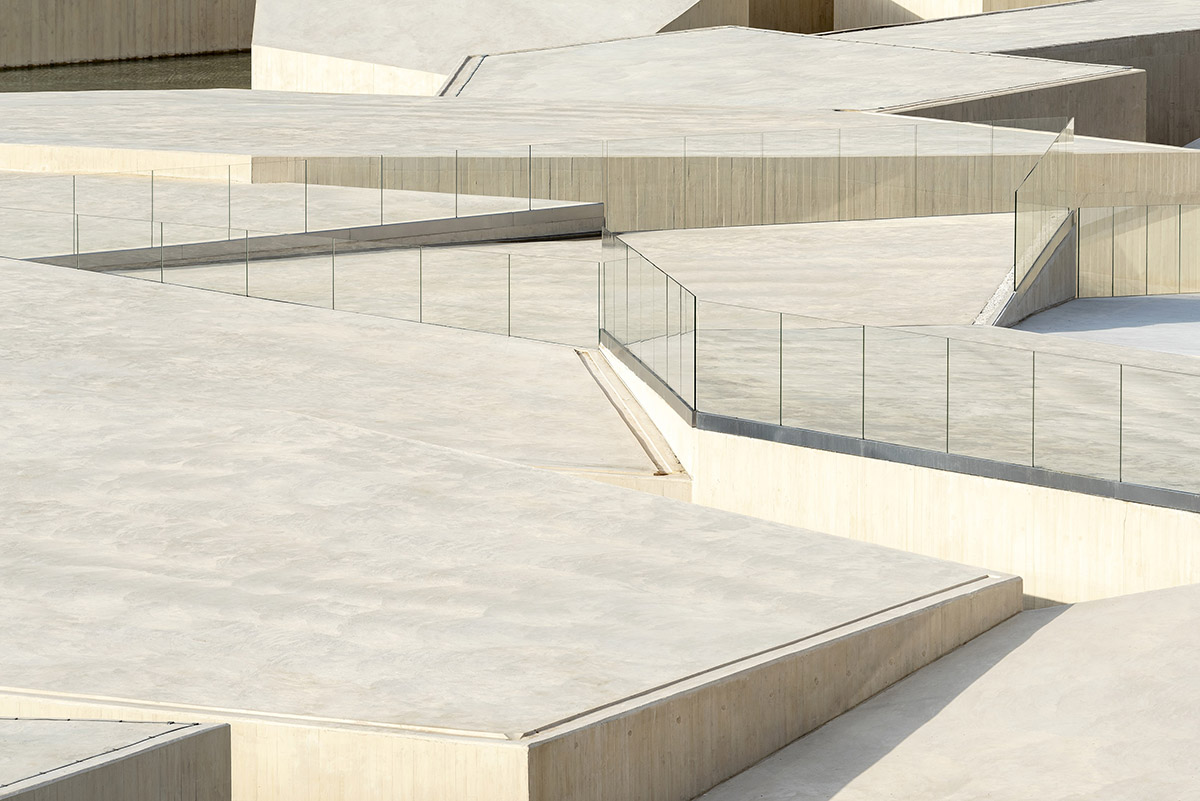 Also, large overhangs created by the landscape’s slanting surfaces form the food and beverage buildings along with the water feature, which supports a comfortable climate for outdoor activities independent from artificial air-conditioning.

The project is developed in close collaboration with The Department of Culture and Tourism – Abu Dhabi (DCT Abu Dhabi). 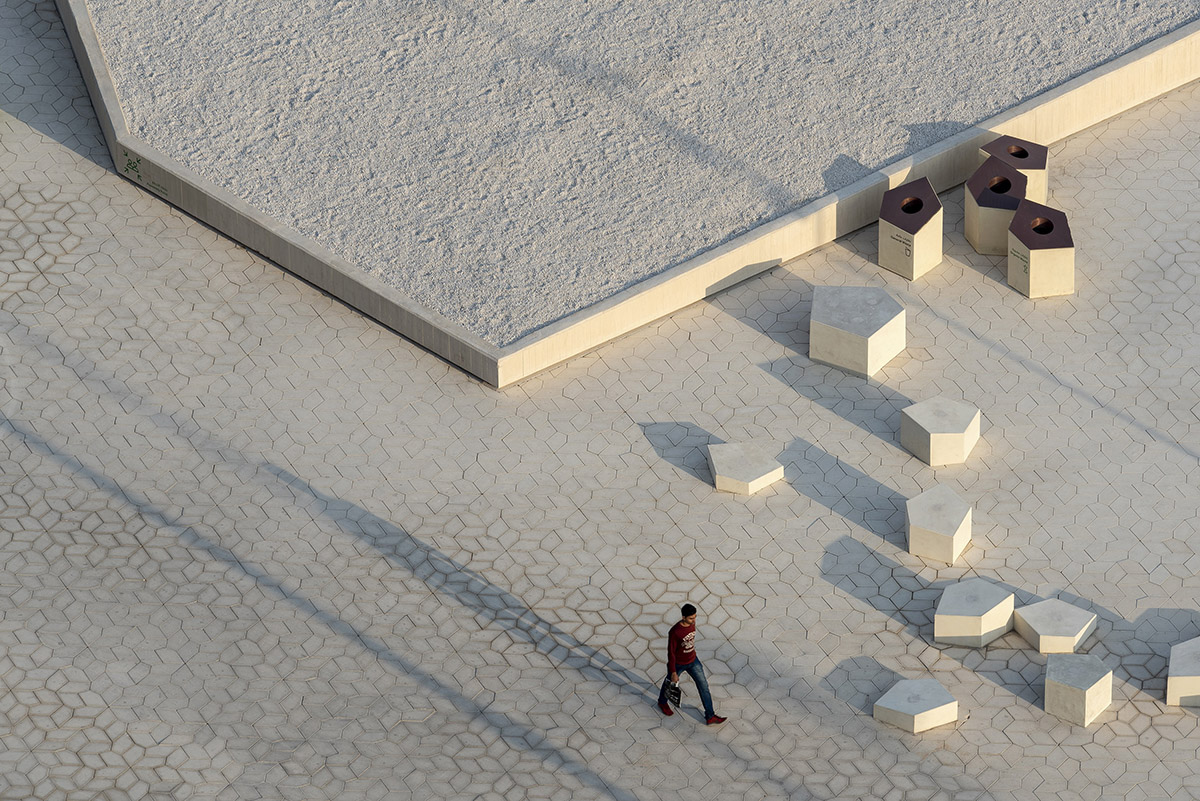 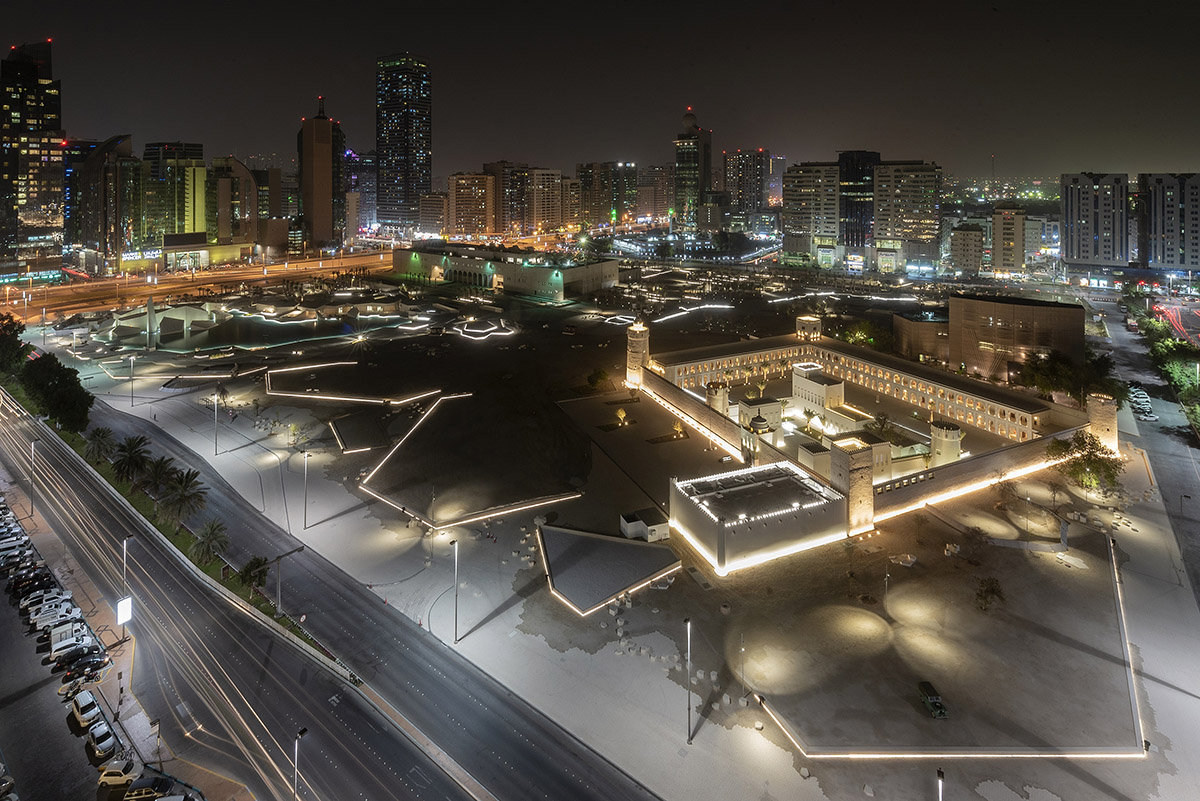 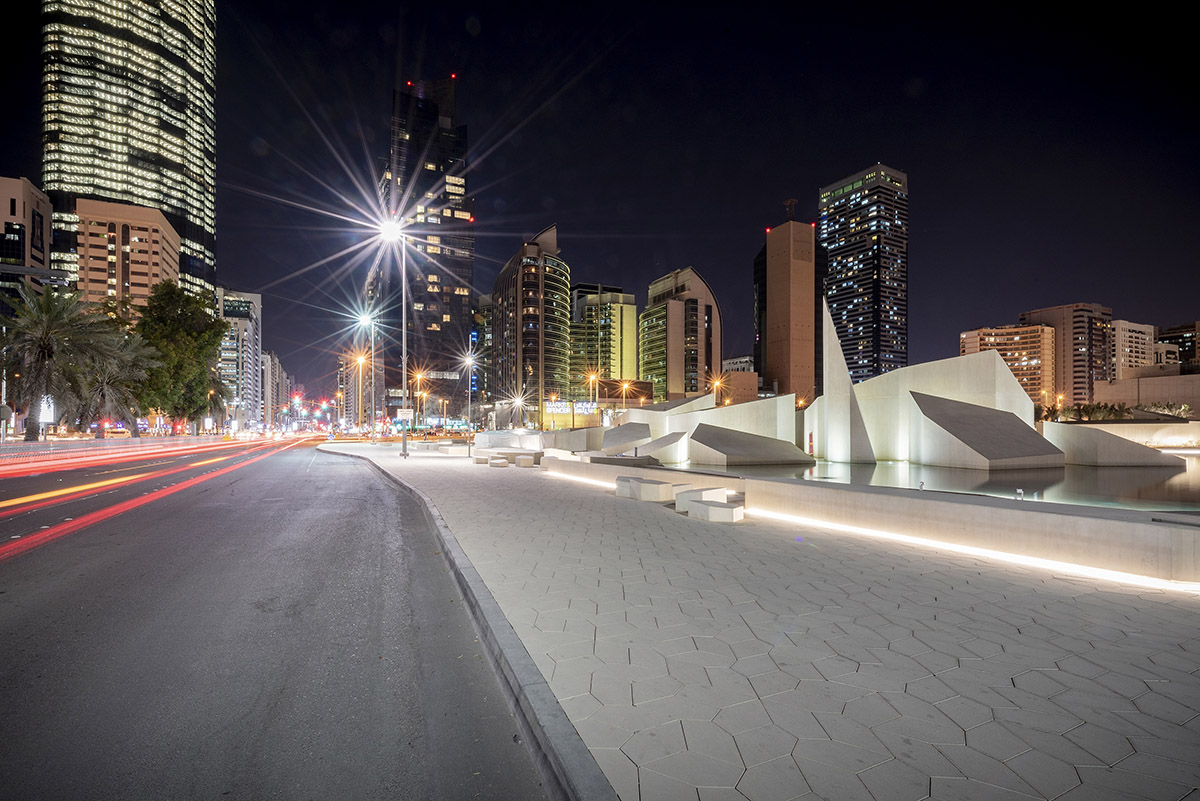 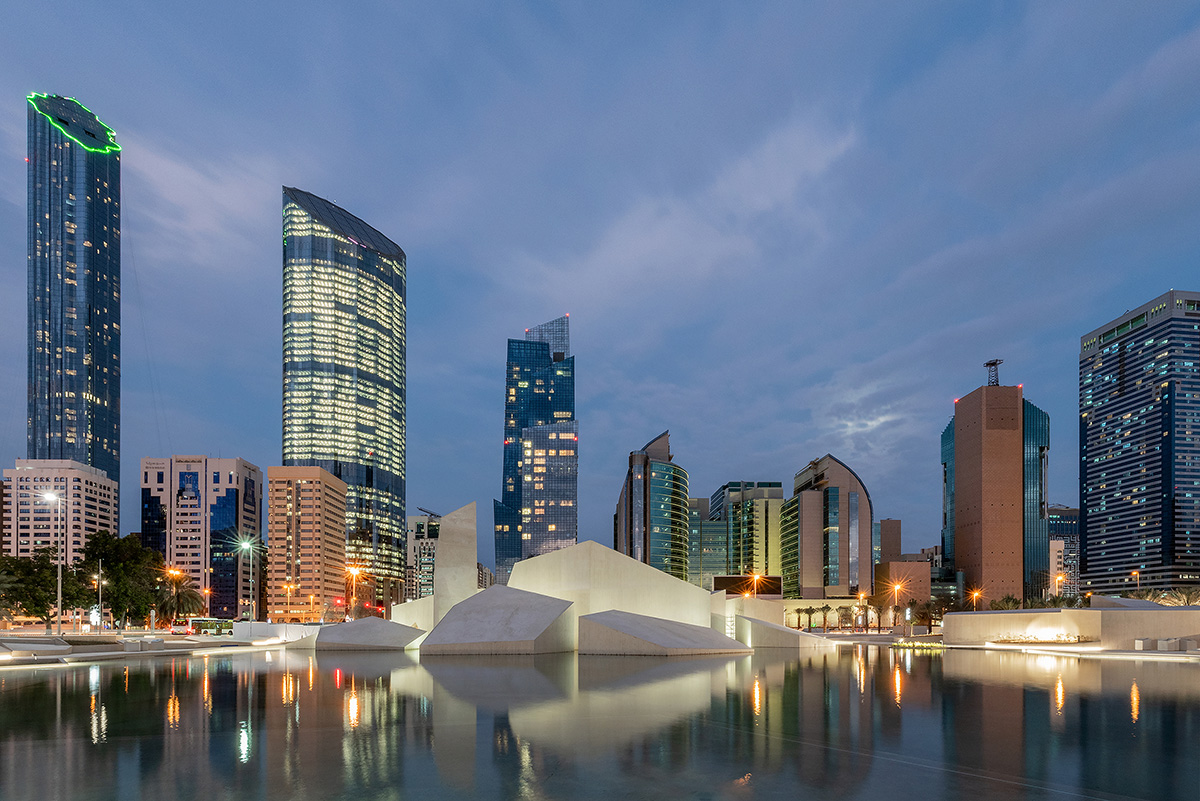 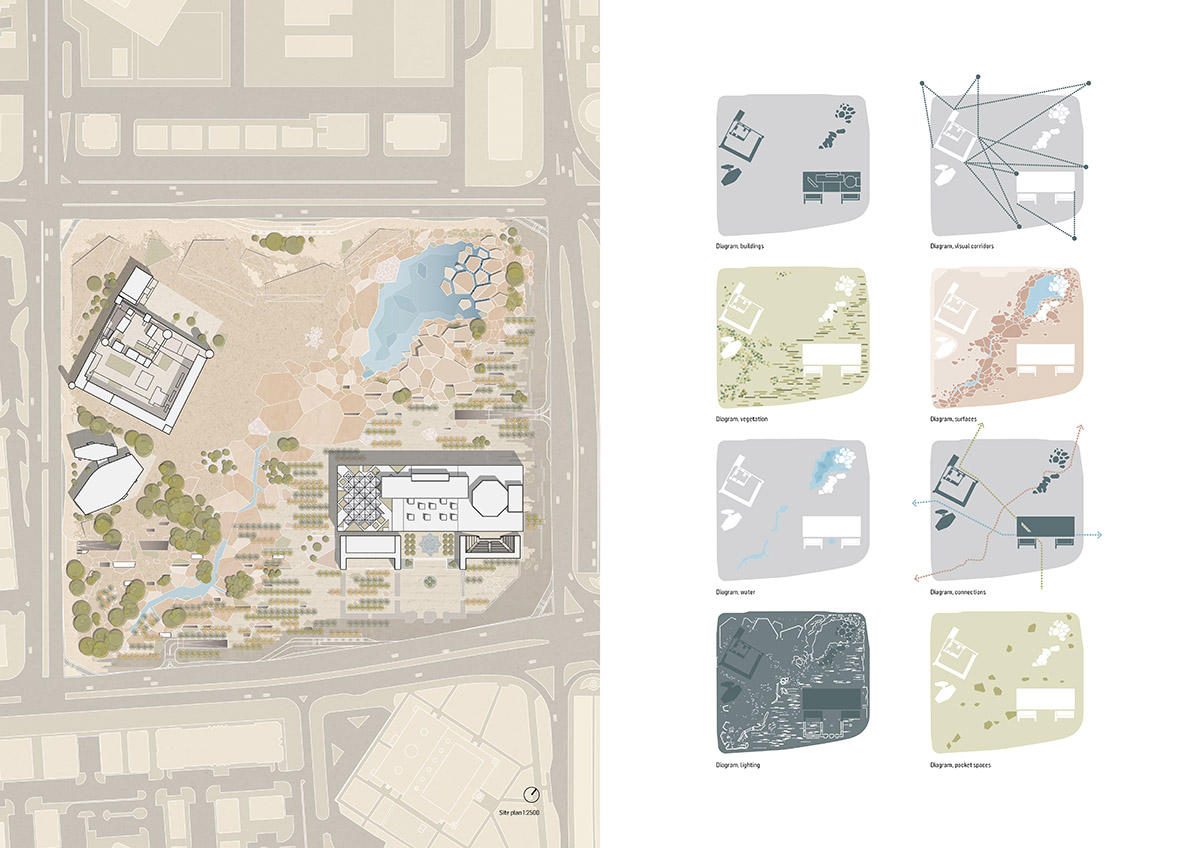 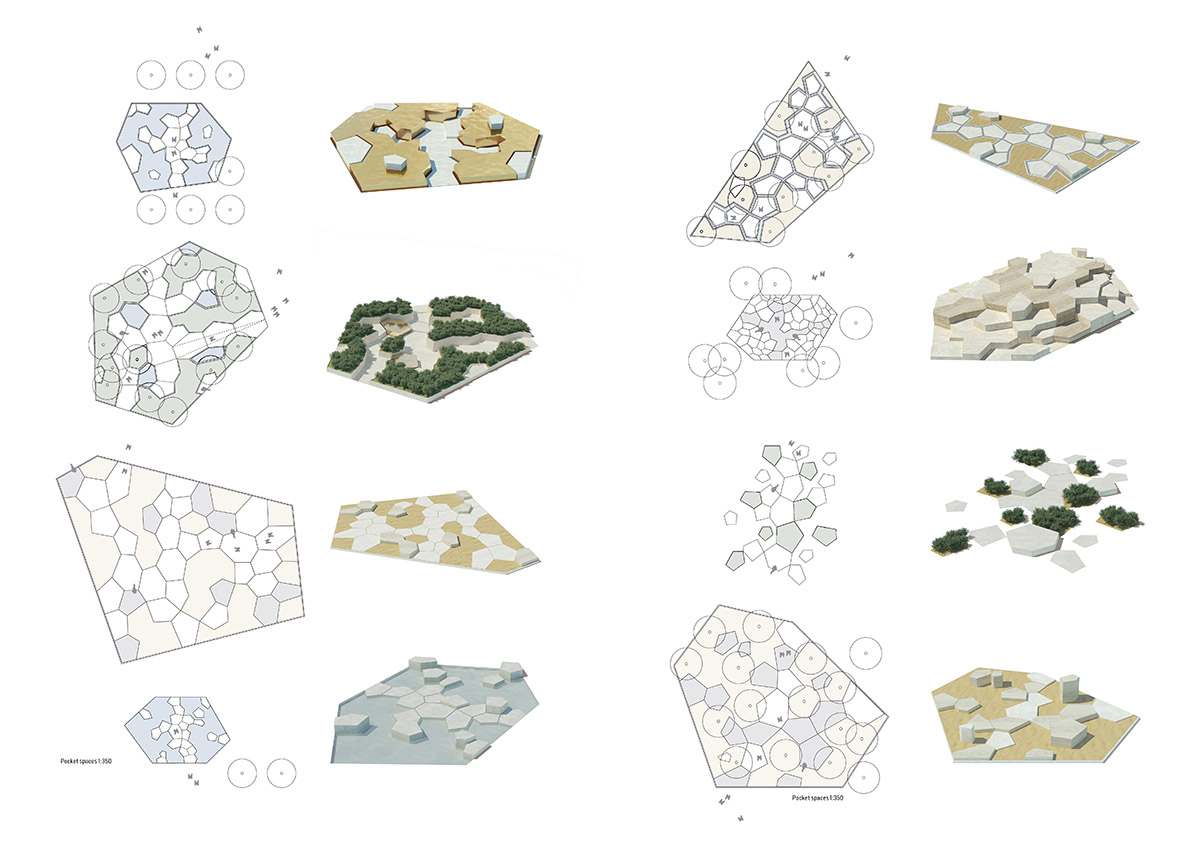 The masterplan was awarded the WAF 2021 in the Landscape – Urban Context category.