Called CasaNova, the 110-metre high-rise, set to be Rotterdam's first triangular tower, has topped out in the Maritime District in Rotterdam.

The construction of the first triangular tower in the skyline has reached a new milestone. With the completion of floor 35, Barcode Architects' CasaNova is at its highest point.

The tower, creating an iconic silhouette, forms an ensemble with The Muse, the sculptural residential tower by Barcode Architects on the adjacent plot, which was completed last year. Both towers are designed in synergy, both architecturally and in terms of the collective program. 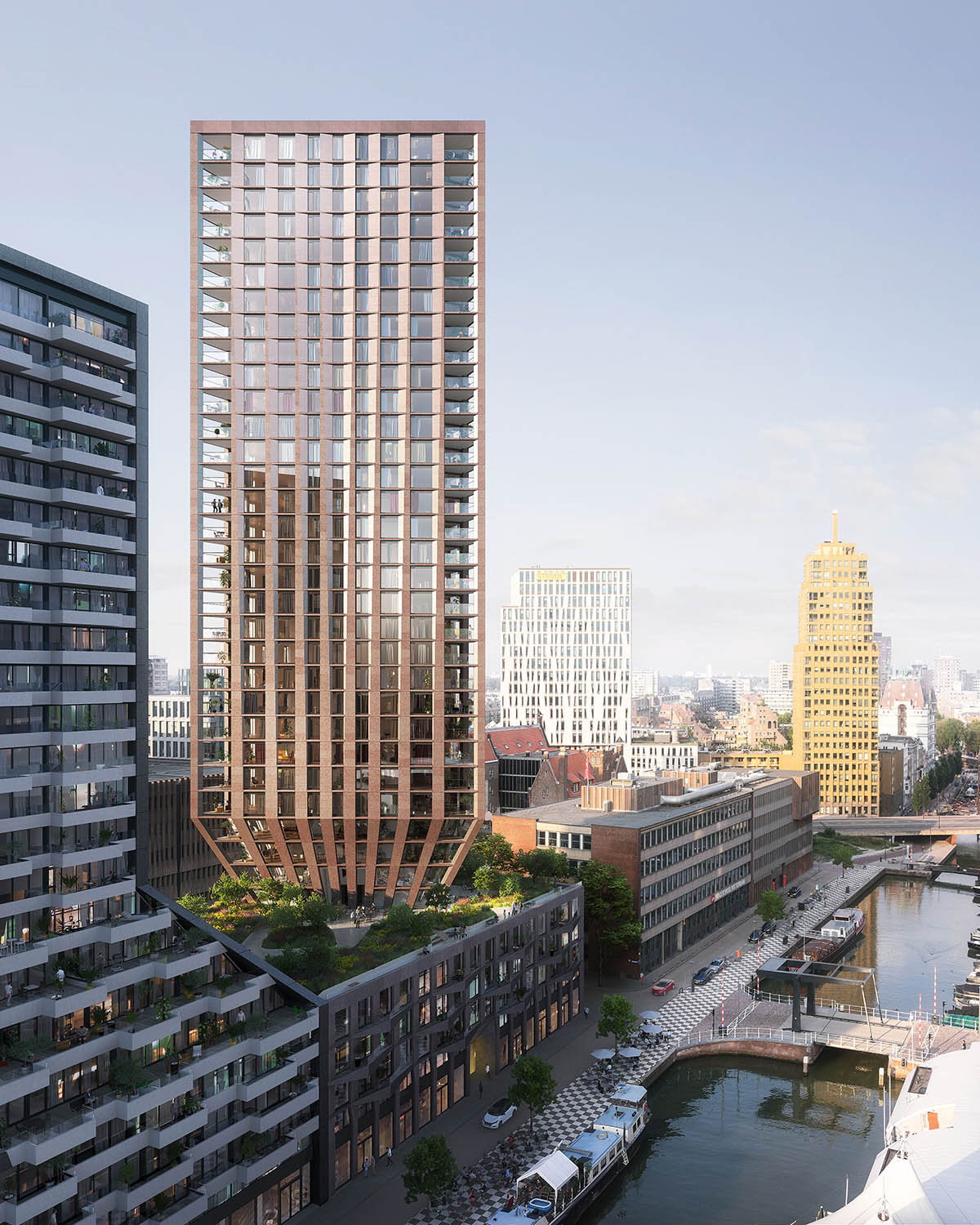 "Within the city boundaries, densification through high-rise is a favorable option, but anonymous volumes where residents don't know each other should be avoided," said Barcode Architects' partner Caro van de Venne.

"With CasaNova, we want to create a three-dimensional part of the city, where people live healthily, neighbours know each other and there is a pleasant atmosphere at ground level." The all-sided building brings new energy to the Maritime District, which is rapidly transforming from an anonymous office district to a vibrant urban area.

CasaNova activates the corner on the Wijnhaven and forms an important link on the new walking route between the Oude Haven and the Museumpark, via the Markthal, Leuvehaven and the Witte de Withstraat.

The slender building shape ensures optimal sightlines and daylight for the surrounding buildings and gives the dwellings in the tower a 300-degree view of the city. Between the fifth and eighth floors, the volume points downwards, balancing the tower elegantly on the base.

On the fifth floor, on top of the low- rise, a 1,600-square-metre roof garden will be realised. The residents of CasaNova and The Muse can meet each other here informally, and the roof garden is directly connected with the liveliness on the quay. Besides the collective roof garden, various shared functions are included in the program, such as a gym, a communal kitchen, co-working spaces, meeting rooms and hotel rooms that residents can reserve for their guests. In the plinth, hospitality functions and the central entrance add liveliness to the public space on ground level. 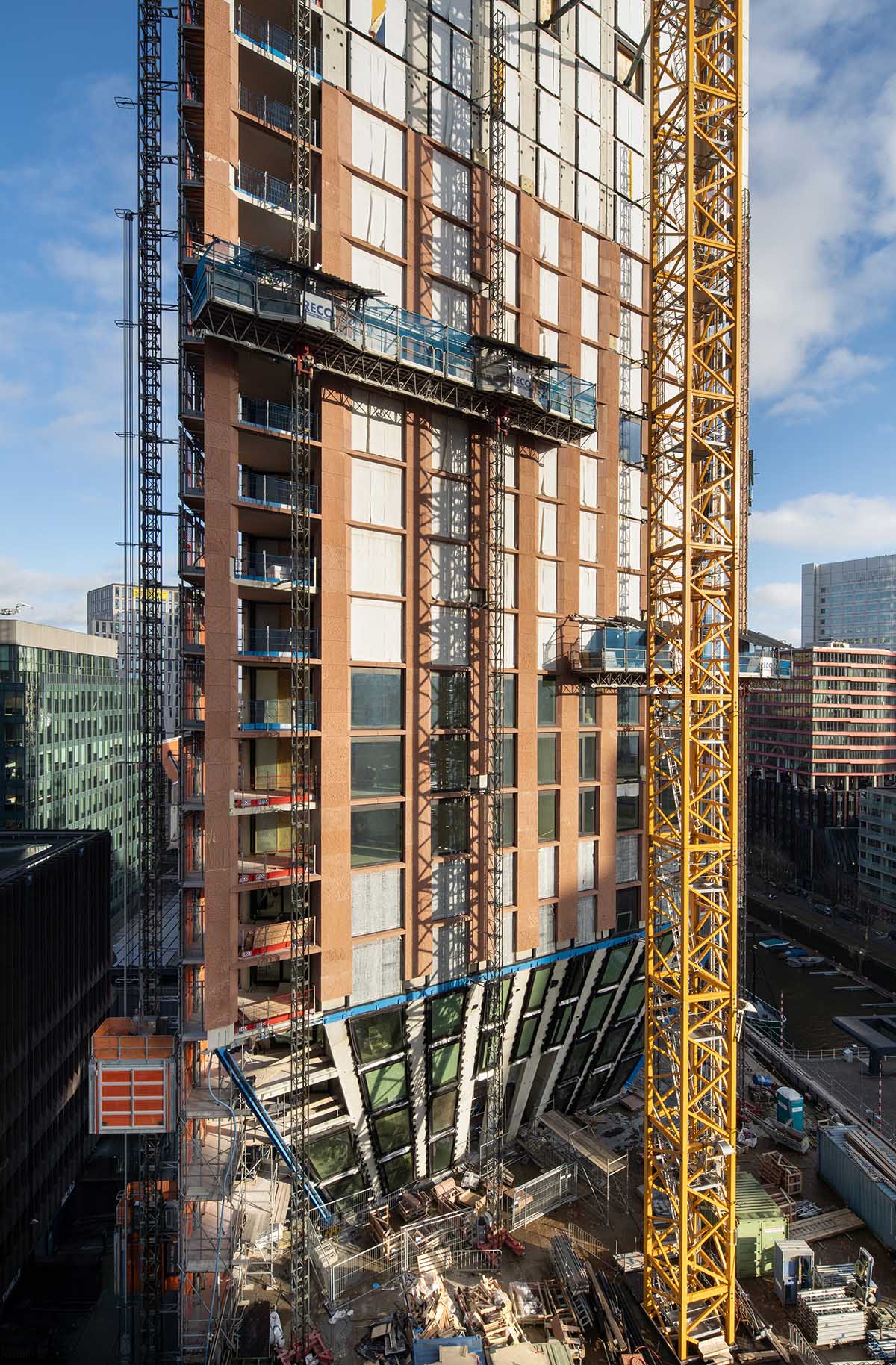 The tower contains a rich residential program with 116 dwellings, from more compact apartments in the low-rise block to spacious tower apartments and exclusive penthouses with large outdoor spaces. Floor- to-ceiling windows ensure optimal daylight entry and spectacular views in all the tower apartments. 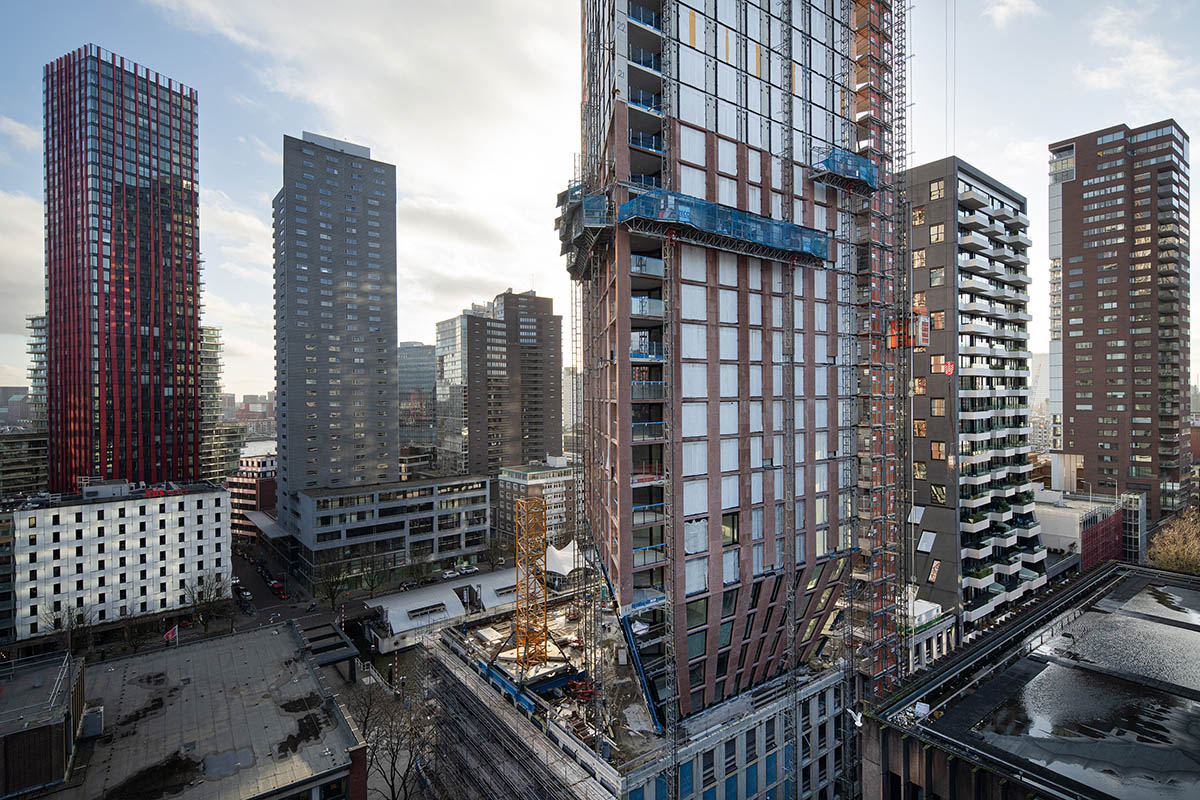 The vertical orientation in the façade accentuates the slender design. Red-brown travertine panels give the tower a warm and powerful appearance all around. Towards the top of the tower, the panels have gradually broader smooth-edged surfaces.

These elements reflect the sunlight, creating a shifting appearance throughout the day and making the top of the tower seem to disappear into the sky.

CasaNova is expected to be completed by the end of 2022.

Barcode Architects and Krft recently revealed design for a mixed-use development PATCHWORK in Amsterdam. Barcode Architects is currently working on the transformation of Berlin's former brewery into a new social hub.