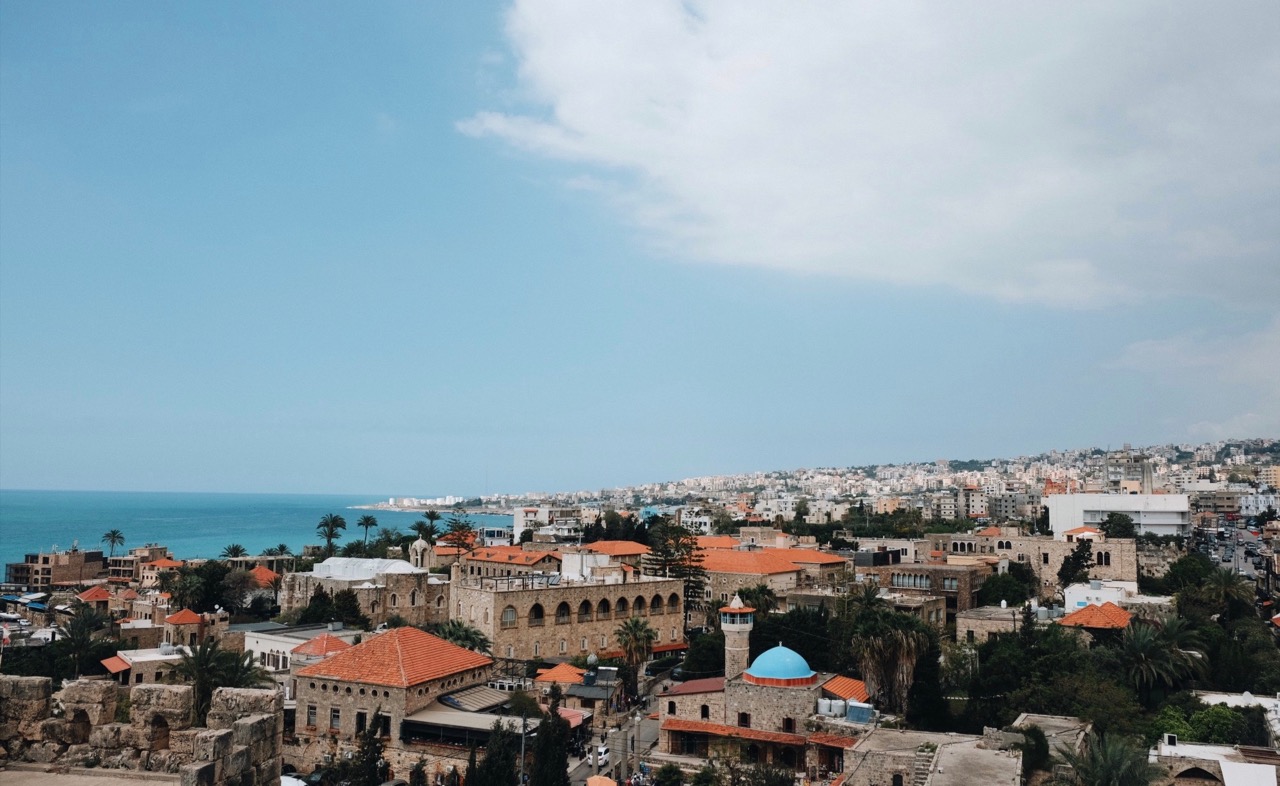 Architectural artefacts add a powerful meaning to a national identity: Notre Dame de Paris, the Kremlin, Taj Mahal and the UK’s Big Ben on the Parliament’s buildings are but a few worldwide known examples to this. On a deeper level, architecture reveals ways of life and expresses them through symbols of practical, social and cultural value. In Lebanon, building a house has been an overarching idea of the family-oriented culture. 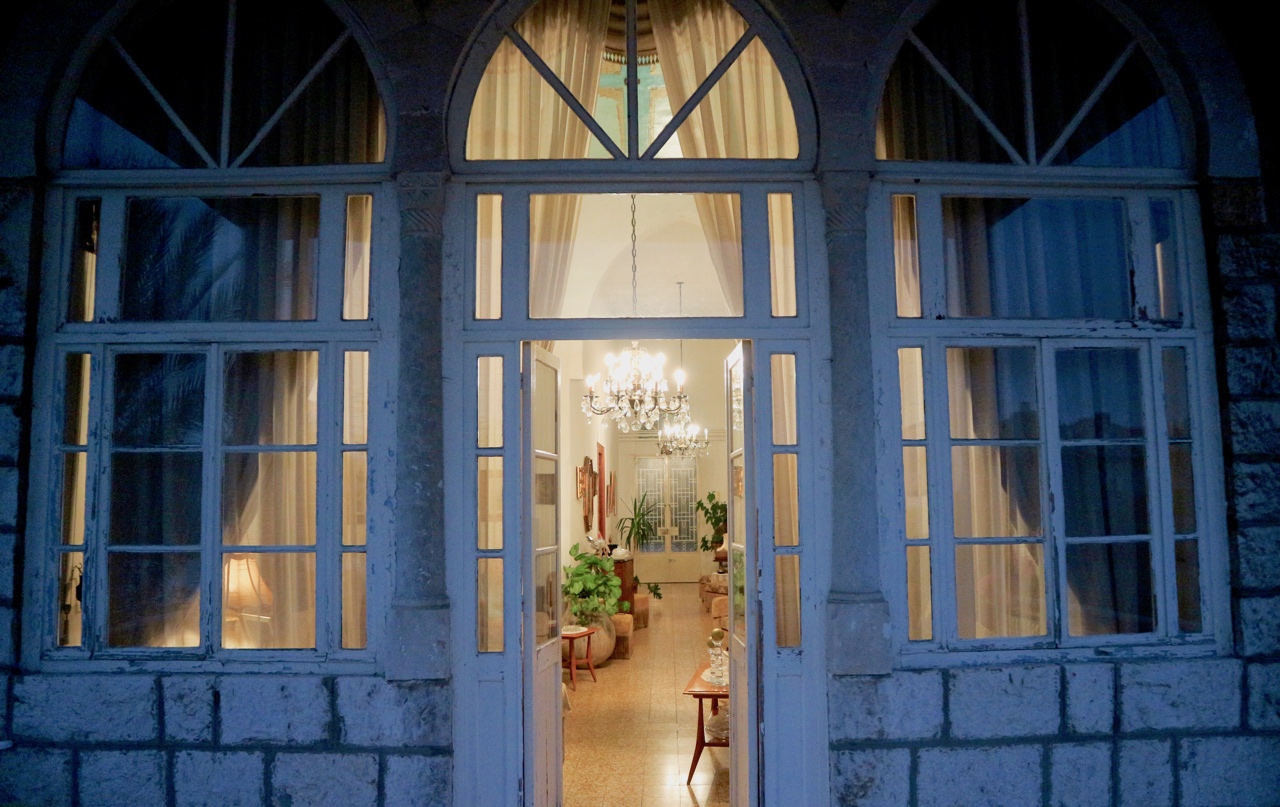 Lebanon is a small country stretched along the east end coast of the Mediterranean. Along its narrow body extend two chains of mountains, Mount Lebanon and Anti-Lebanon, much defining the country’s exceptional sun-drenched humid climate and the mountains covered with greenery in summer and snow, in winter (giving the country its name). The Lebanese mountainous landscape is inseparably weaved into the curves of the seaside bays.

Similarly to a number of countries across the Mediterranean where the greatest civilizations that ever existed have left a trace: Phoenician, Mamluk (Islamic), Byzantine, Roman, Ottoman, and French, Lebanon is rich in such architectural traces and artifacts. The latter are masterpieces that convey the epitome of the culture they represent: the Temple of Jupiter in Baalbek, Chamaa Castle south-east of Tyre, and the khans of Tripoli. This article, however, will focus on the Lebanese residential houses. 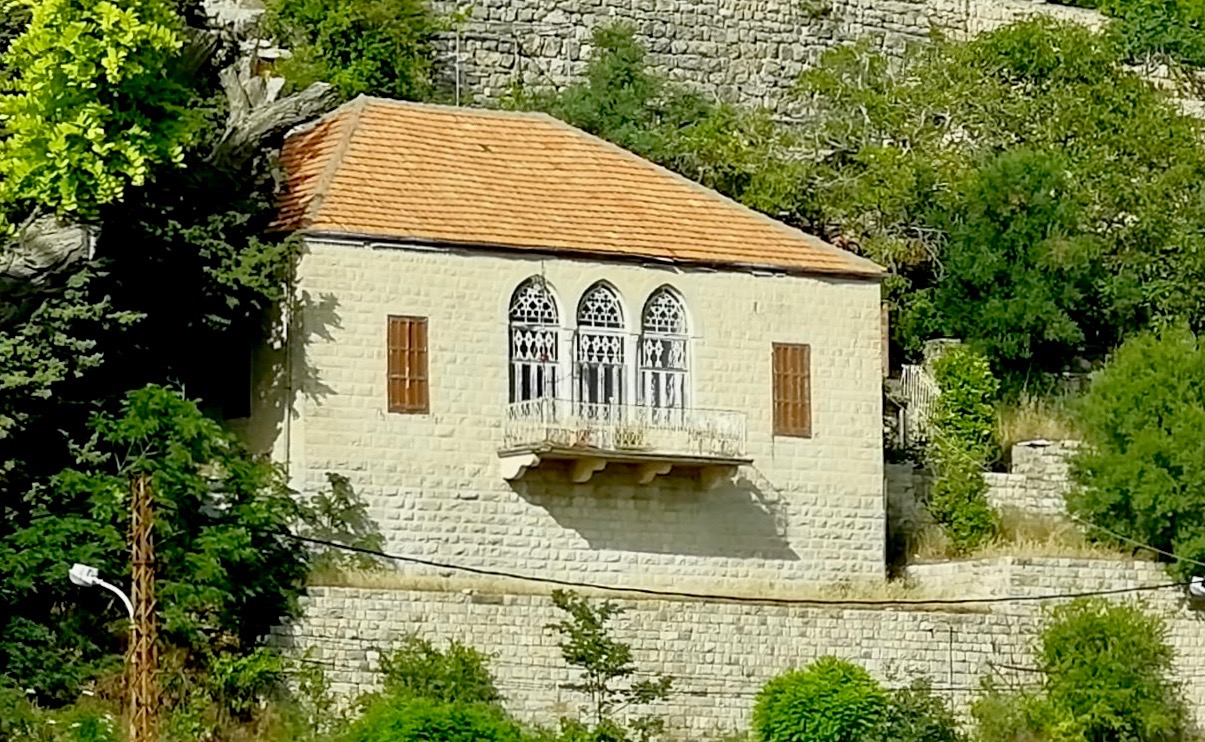 The Lebanese house is only found on the Lebanese territory and is traced from the Phoenician era to the more recent times, evolving with time through adding authentic elements to it as well as adopting the influences of other cultures. In particular, the article describes the Phoenician mastery of house building, the way it has evolved and points out the influence of other cultures onto its evolution.

The earliest residential traces date back to the times of the Iron Era when the Phoenicians lived all over the Mediterranean and the Northern lands of Africa (Carthage). Known to be great merchants, Phoenicians traveled extensively. Their construction preferences were certainly influenced by what they had seen during travel. And to this day in many countries around the Mediterranean, the term home has similarities in spelling and/or pronunciation, bayt [bait]. 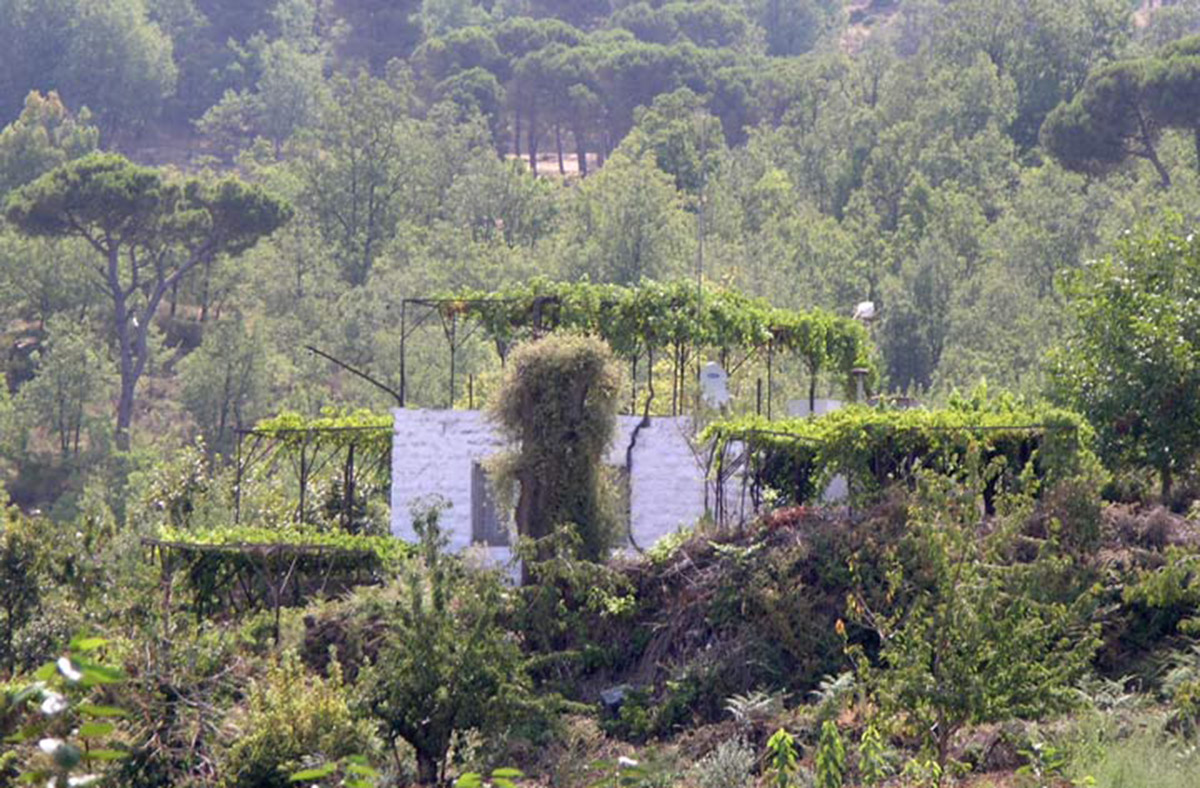 The underlying concept of the Lebanese residential architecture is its organic integration with the landscape and its response to the natural aesthetics. In most cases, this interaction happens through a particular architectural element that links the interior and the exterior of a house. With this in mind, there are four types of residential houses distinguished across Lebanon: the closed court house (described above), the gallery house, liwan house, and the central hall house. There also exists a plenty of various combinations of them. 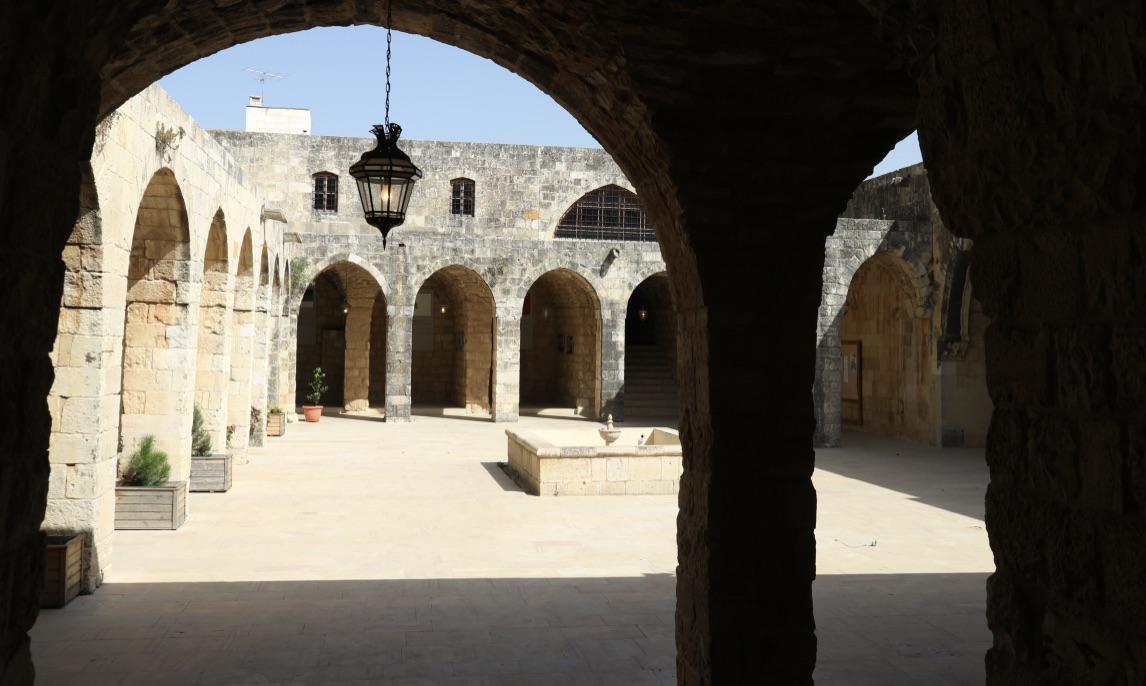 A residential territory presented a walled plot where cattle were kept, and a covered shelter, being part of this area, served a protective purpose for people and cattle. A typical indoor represented an undivided indoor space with roofing shared by people and animals. The lack of vertical dividers kept man and animal in close proximity, and also maintained a better thermal indoor climate during the cold season. That said, the house conveniences were built outdoor; in later periods the service areas would still be given little priority (compared to the living space) in many residential houses.

The indoor space was nevertheless divided into functional areas by way of changing floor levels: the family sitting (and sleeping) space was higher (by 30-70cm/12-25 inches) compared to the entrance area. With time, the indoor planning changed dividing the space into several rooms of approximately the same size on the sides of a long corridor. Buildings were typically two-three storied (unlike the Roman houses). The ground level of their residences was designated as commercial stock storage, preserving the upper levels as the living spaces of the family. 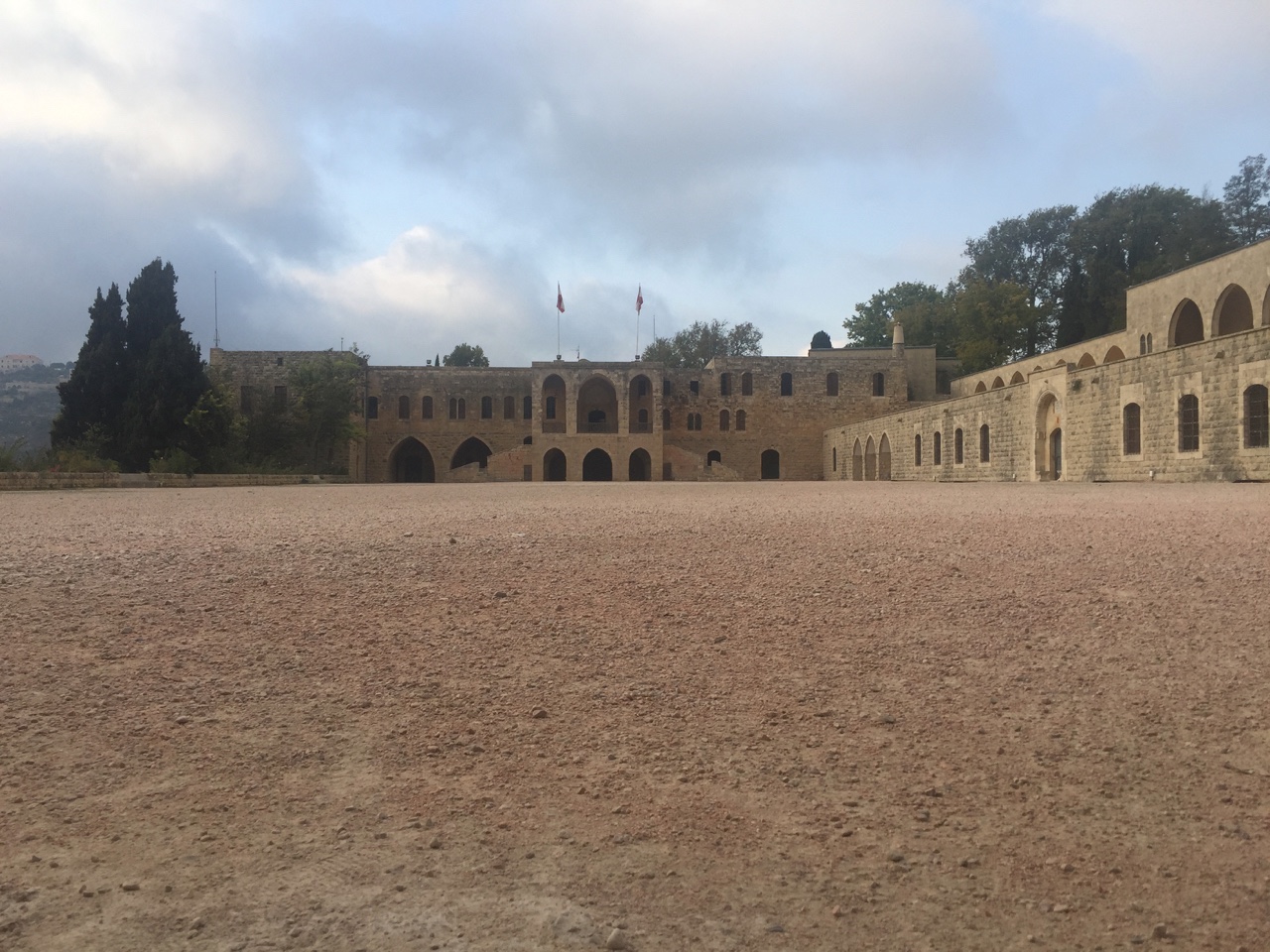 On the outside, Phoenicians preferred to live in close and shared neighbourhoods: clusters of their residential units would be connected by a common courtyard (closed courtyard houses). Such urban settlements were always built in places with access to water, mineral resources and where it would allow to develop agriculture.

The urban infrastructure development took a leap forward when the social emphasis gradually shifted from the focus on the family to societal exchanges and trade. First, the merchants converted the ground level of their houses from storage into points of sale and workshops. Second, souks began to develop and attract floods of people thus triggering a dense growth of courtyard compounds around them (souks). 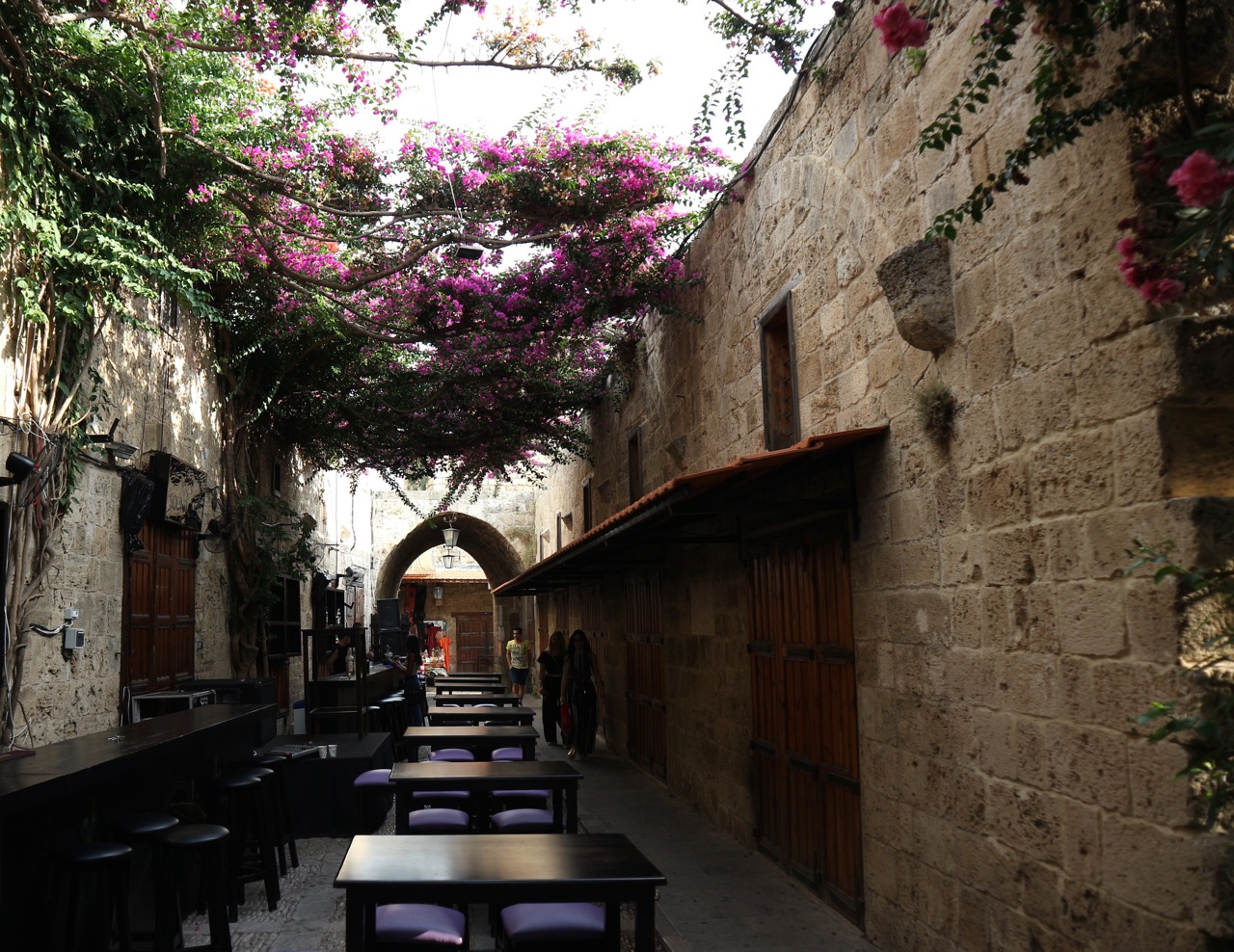 On the land of the Levant, Phoenician urban coastal settlements featured two main elements: the lower town where manufactures existed among the houses for common civilians, and the upper town that featured the residences of the wealthy people as well as the temples and the administrative buildings. The upper town was also used as a citadel, and was therefore separated with a wall. Like citadel, each house territory was defined by its walls and thus created a closed house court yard. 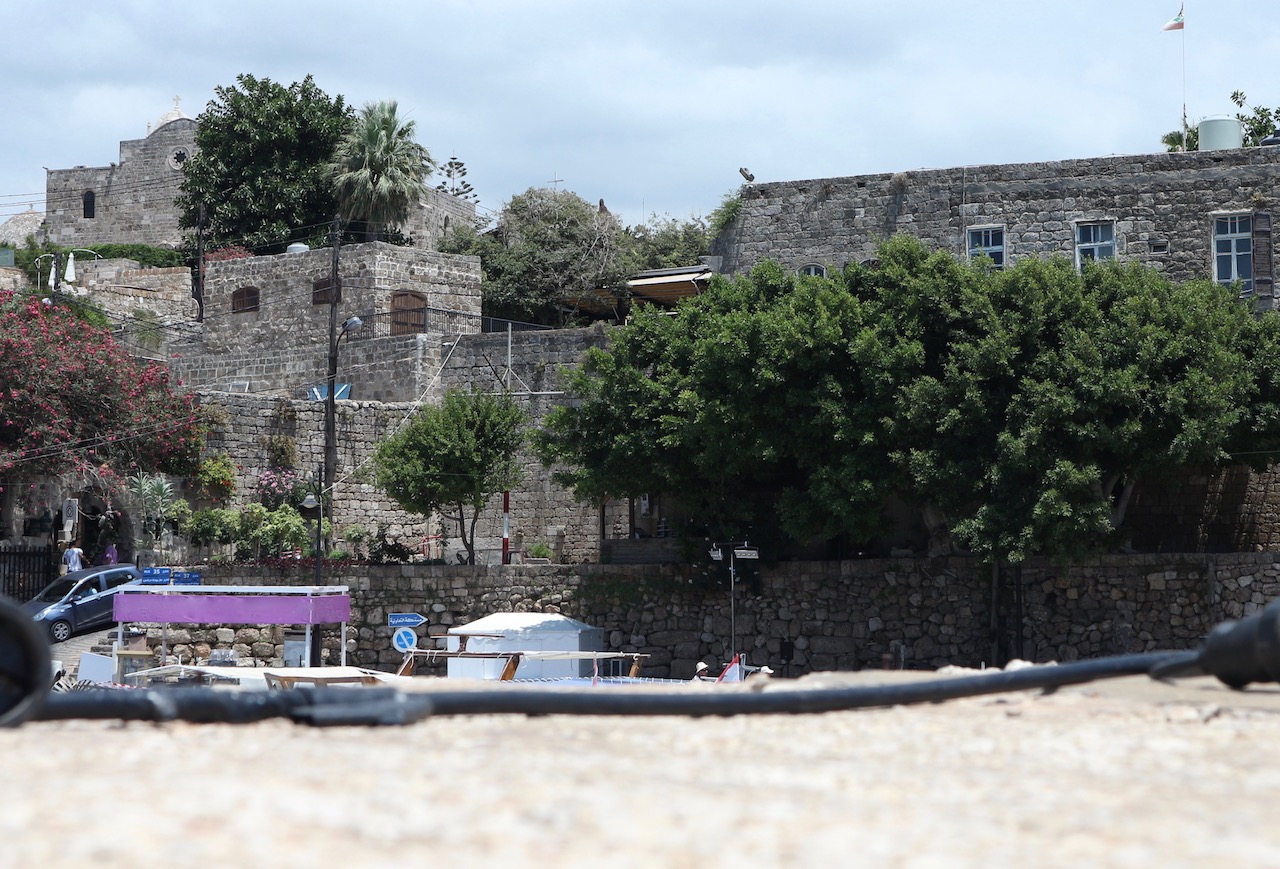 The same was not the case for the houses in the mountains which seem to have remained to be built as single units. Following the particularities of the landscape, these houses would be integrated into the very steep mountain slopes exposing its front side to the panoramic views of the mountain valleys or the seaside. And if the early houses were mainly overlooking the west and north-west sides, they later were built to benefit from the view on all four sides.

In the mountains, the gallery is an awkward construction. Due to the natural landscape, the building planning is different. Instead of the gallery, houses may feature a liwan.

As clearly stated in a paper published in meta-corpus.net, Liwan house is the type of house least found in Lebanon. A liwan is a covered terrace which is only open (non-walled) at its front side. On the sides of a liwan, there are usually two rooms with doors placed in the front part of the liwan’s side walls. Liwan makes sense in warm climates where it is protected from winds, dust, animal and people and is believed to originate in the Arab culture. In the mountains, it is the extension of the liwan into the terrace further than the two rooms at sides; in the coast areas, they go hand in hand with courtyards. 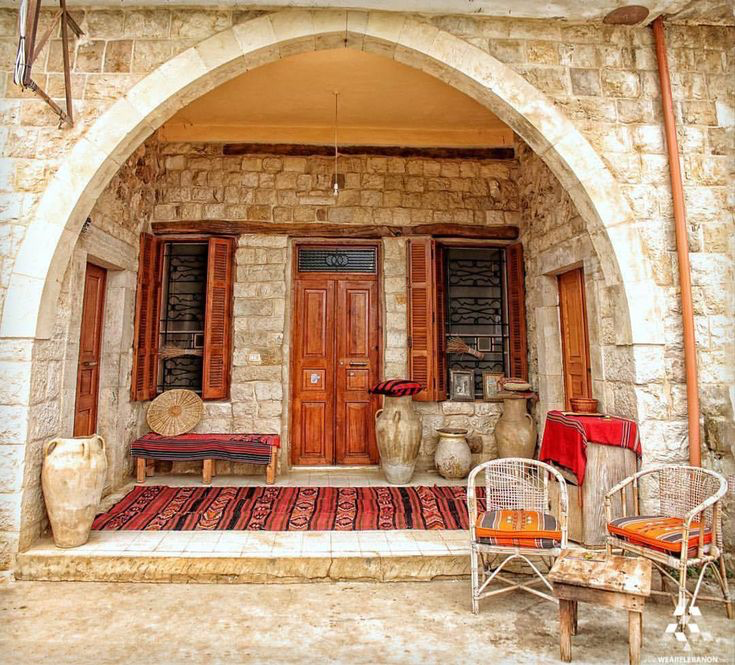 Liwan © image courtesy of We Are Lebanon

According to a paper published by Archnet, Central Hall House, as of the mid of the 19th century, emerges a modern type of house which at present is referred to as the typical Lebanese house: central hall (dar) house. Possessing tripartite arcade that integrates the house with the view, it is rarely found in Syria or any other neighbouring countries. Originally, the arcades consisted of a door in the central section and two windows on each side and were unglazed before technology allowed glazing. The central hall would usually have a balcony made of a marble slab and iron railing. 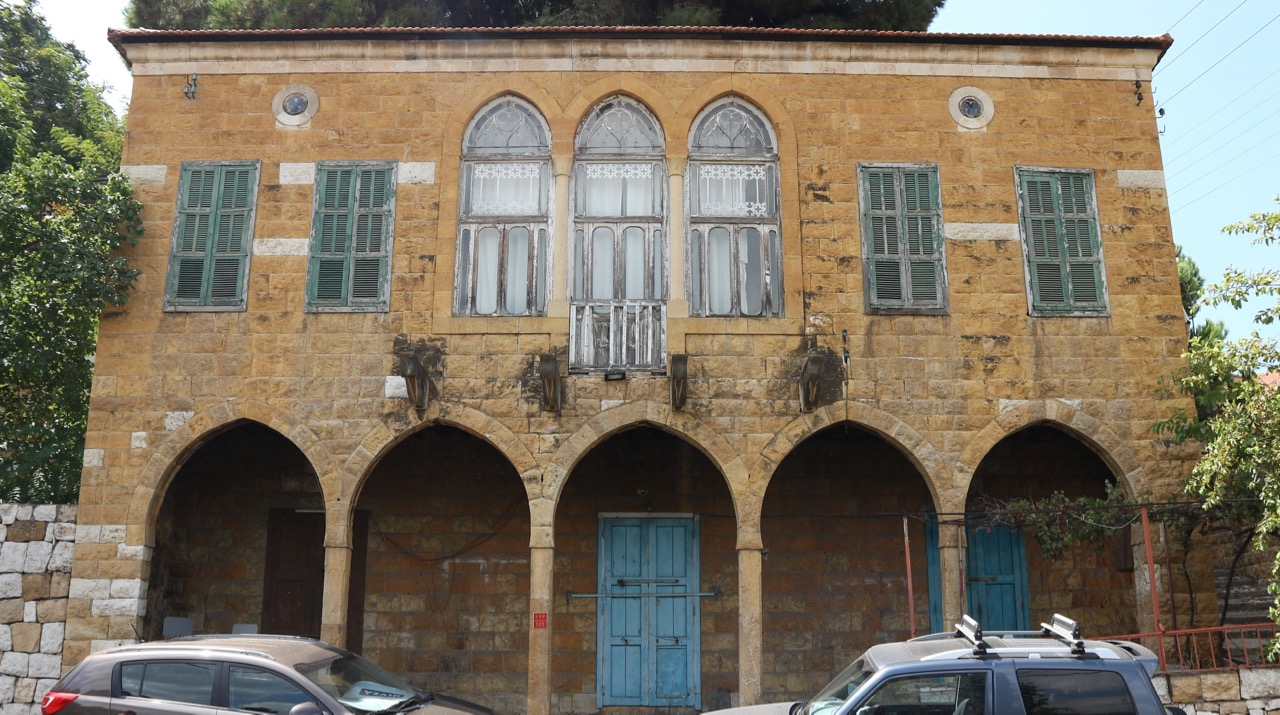 Built predominantly on the hillside, the entrance of the central hall house would be placed in the rear central part of the hall or on one or both of its sides, symmetrically juxtaposed. Central hall houses are usually two storeyed, each store with its distinct planning and purpose of use. The ground level is usually divided into barrel-shaped vaults used as spaces for work or storage. The shape of the house is simple (square or rectangular) with pointed roof, which makes it possible to be covered with tiling, predominantly red in colour. Besides being aesthetically appealing, red tiling would convey the wellbeing of its owner. 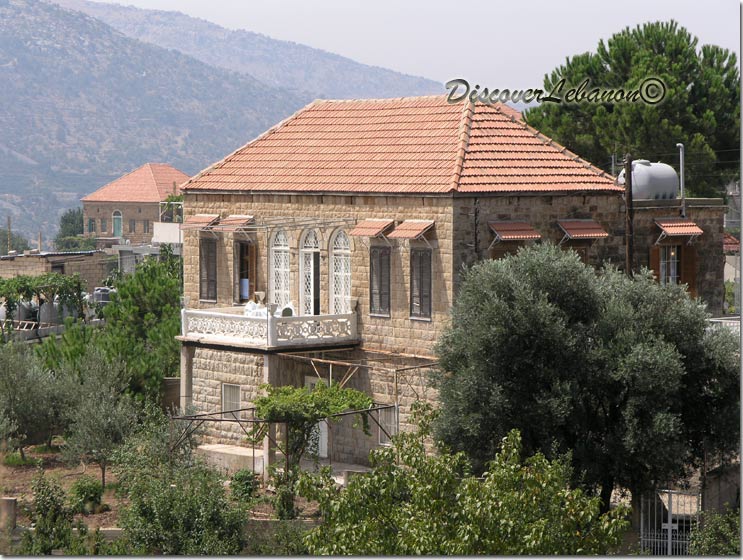 This type of house building had been maintained up until the first World War, albeit even by the 19th century, central hall houses would already embrace a westernised vision of the landscape: equal on each side, not only on the front one. Another western European influence was that the external staircases leading to the upper house level were moved inside.

It is this type of house, the central hall house, that is acknowledged as a national heritage of Lebanon for its unique elements of connection to the natural environment around: tripartite arcade, mandaloon window etc. Despite the resemblance with the elements of Venetian architecture, the tripartite arcade is recognised as an authentic element of the Lebanese residential architecture. But unlike the earlier times when neighbouring and other influential cultures inspired the local urban landscape, the peak of the modern era brought considerable concerns for the identity and existence of the Lebanese residential architecture. 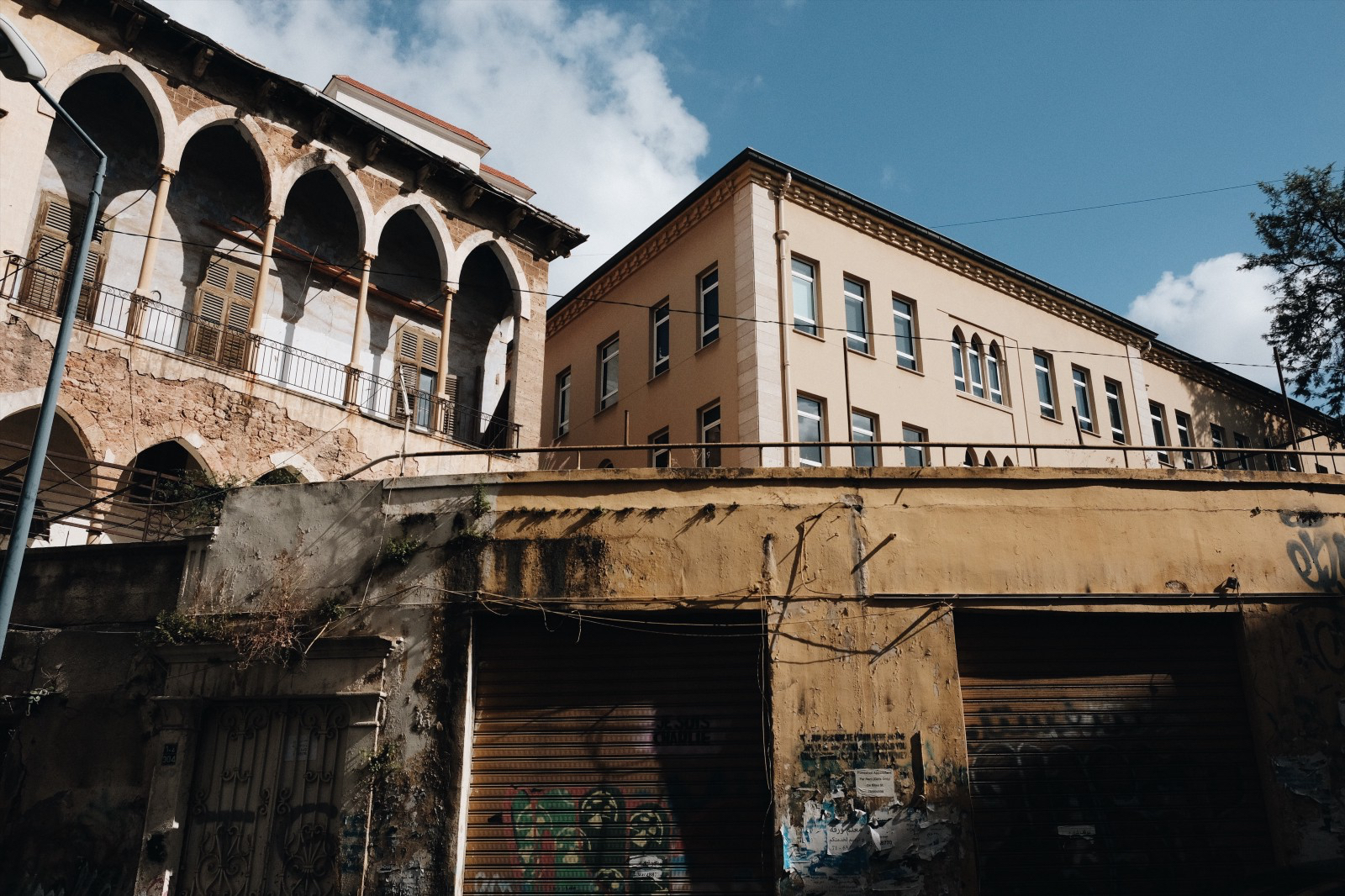 After the civil war, new houses would increasingly fail to respect the two fundamentals: the house as an integral part of the landscape and its reciprocity with the natural environment. It was partly due to the fact that Lebanon saw a strong influx of foreign architectural professionals who knew less about the local architectural traditions formed over thousands of years. Along with this, the growing economy and the liberally-oriented tastes of the Lebanese brought innovation and comfort which interrupted a smooth urban layout and eventually failed to meet the interests of the civil society at large.

There have been made numerous and dedicated attempts to prolong the life of the living heritage of the traditional Lebanese architecture. The issues that surfaced, however, address the differences in the styles of living: the classical house appears to be less equipped for modern living standards as it frequently lacks functional areas (kitchens, bathrooms etc) and privacy (due to the internal planning). Apart from this, funding is also a challenge because residential houses wait in line behind palaces and public buildings. Finally, crafts such as stone masonry and ceiling hand painting have not been in much demand and, as such, became almost extinct. 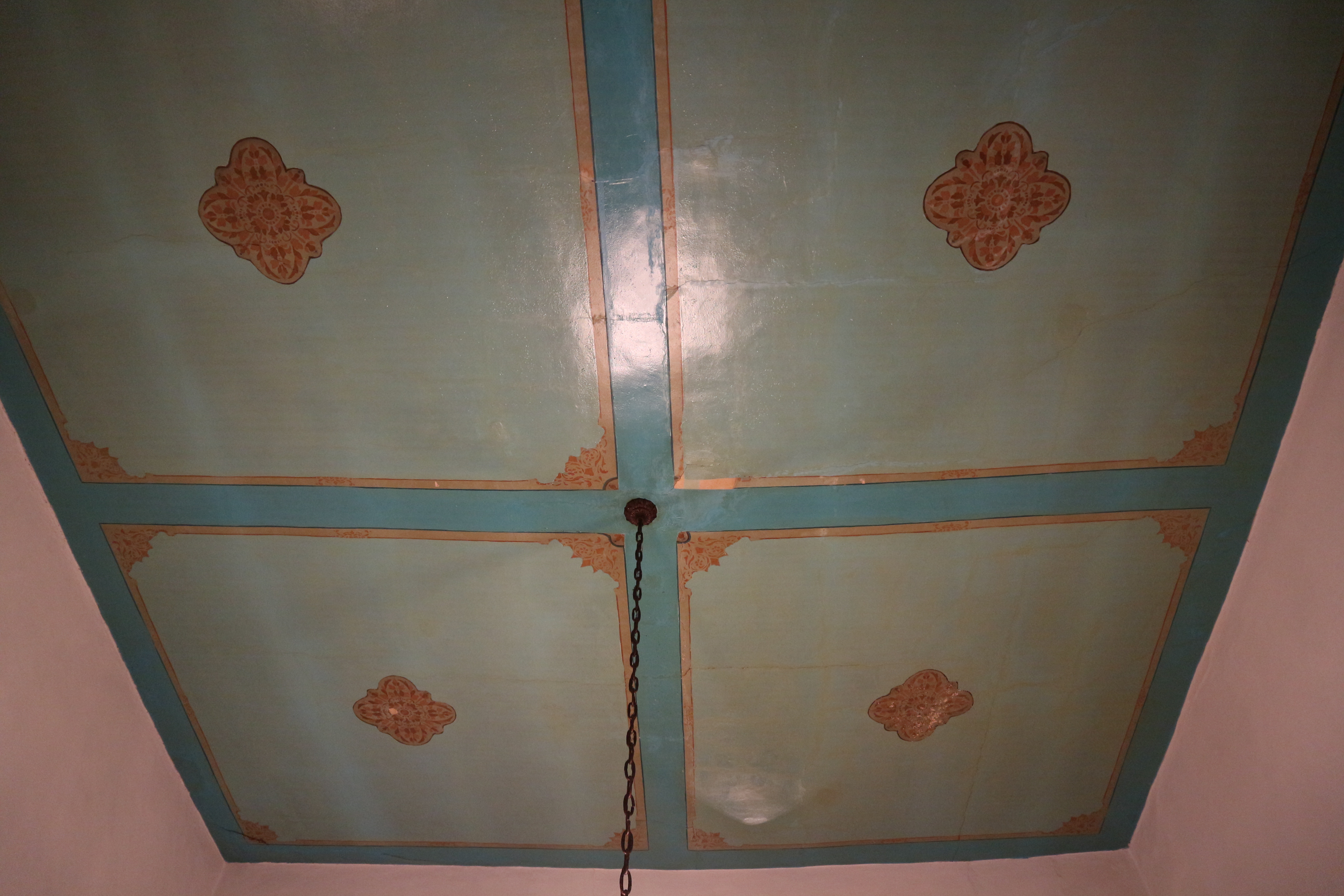 To date, the main impact into the preservation of the classical Lebanese residence has been through raising awareness among the wide public about the national cultural heritage and still more remains to be done in support of the residential artifacts. All owners should be able to have their houses registered in the List of Antiquities of Lebanon. Apart from this, support by local and national public institutions and authorities is crucial in creating a holistic and systematic approach to estimate the value and the scope of the national heritage. Besides feasibility, owners would thus be able to derive priorities and levels of mastery required to address the renovation process.