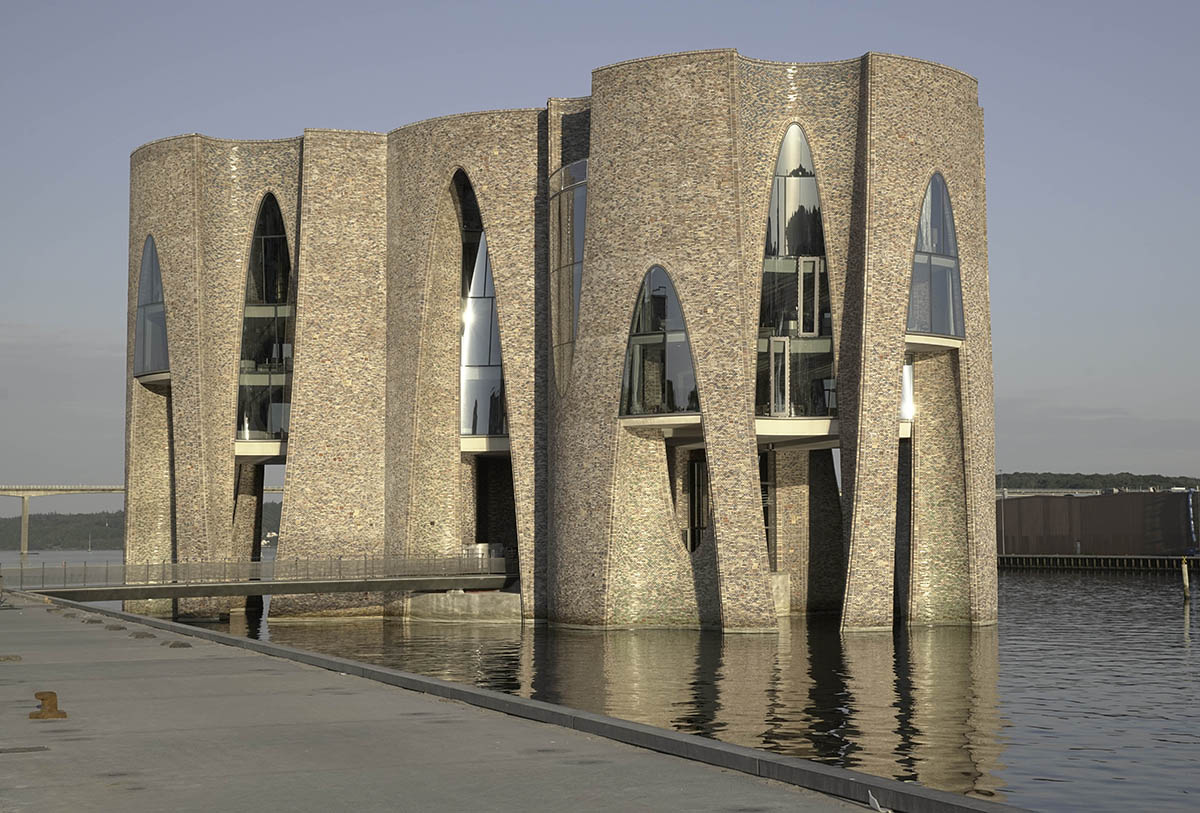 Icelandic-Danish artist Olafur Eliasson, known for his sculptures and large-scale installation art, has completed his first building in Vejle, Denmark, which presents itself as a new embodiment of art composed of carved surfaces raising on curvaceous columns on the water.

Titled Fjordenhus (Fjord House), the first building was designed entirely by artist Olafur Eliasson and the architectural team at Studio Olafur Eliasson, transforming Eliasson's artistic ability into a new spatial dimension. The house will open to use on June 9 in Vejle. 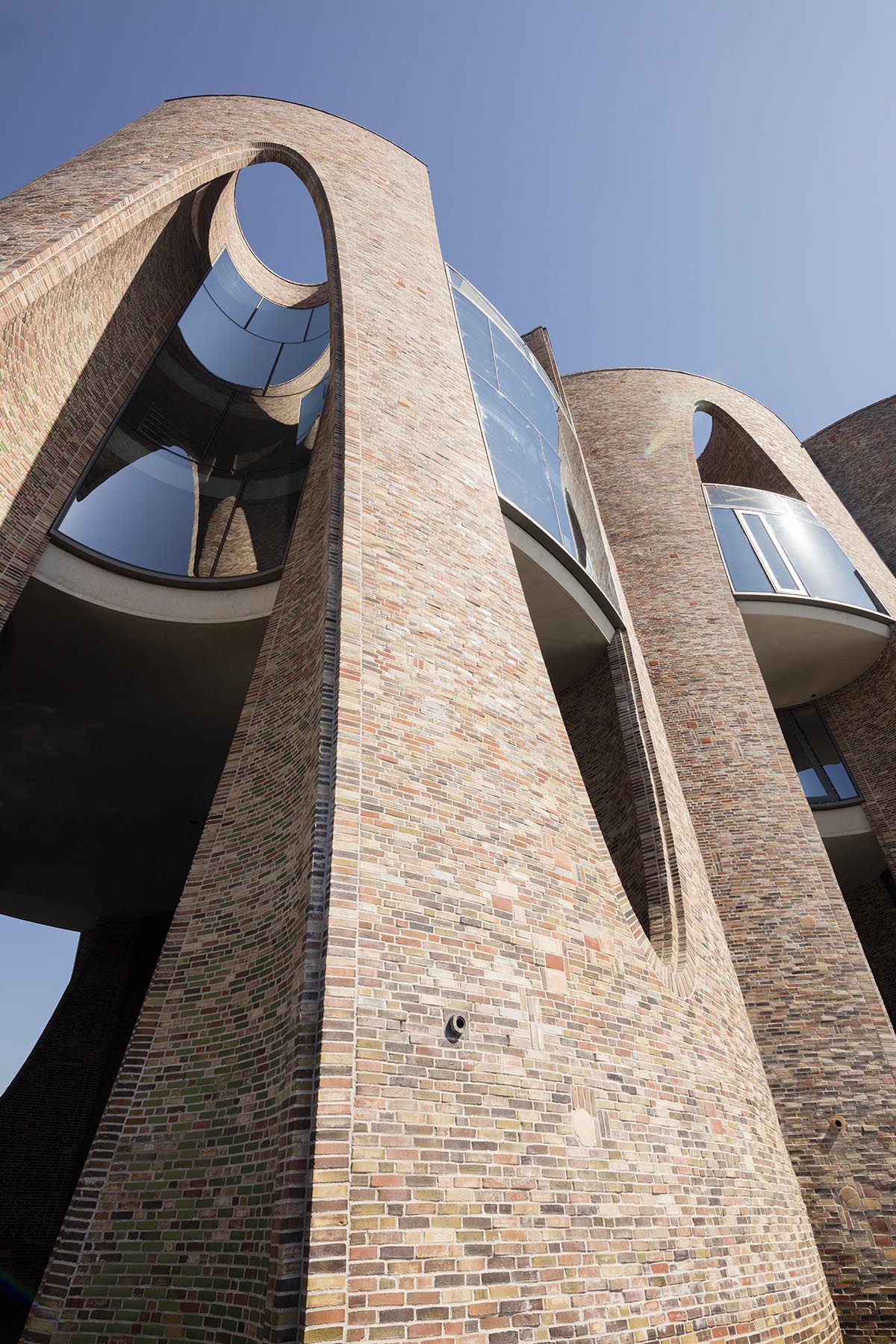 Commissioned by KIRK KAPITAL, the company’s new headquarters offer a contemporary interpretation of the idea of the total work of art, incorporating remarkable site-specific artworks by Eliasson with specially designed furniture and lighting.

"Rising out of the water, Fjordenhus forges a striking new connection between Vejle Fjord and the city centre of Vejle—one of Jutland peninsula’s thriving economic hubs," said the studio. 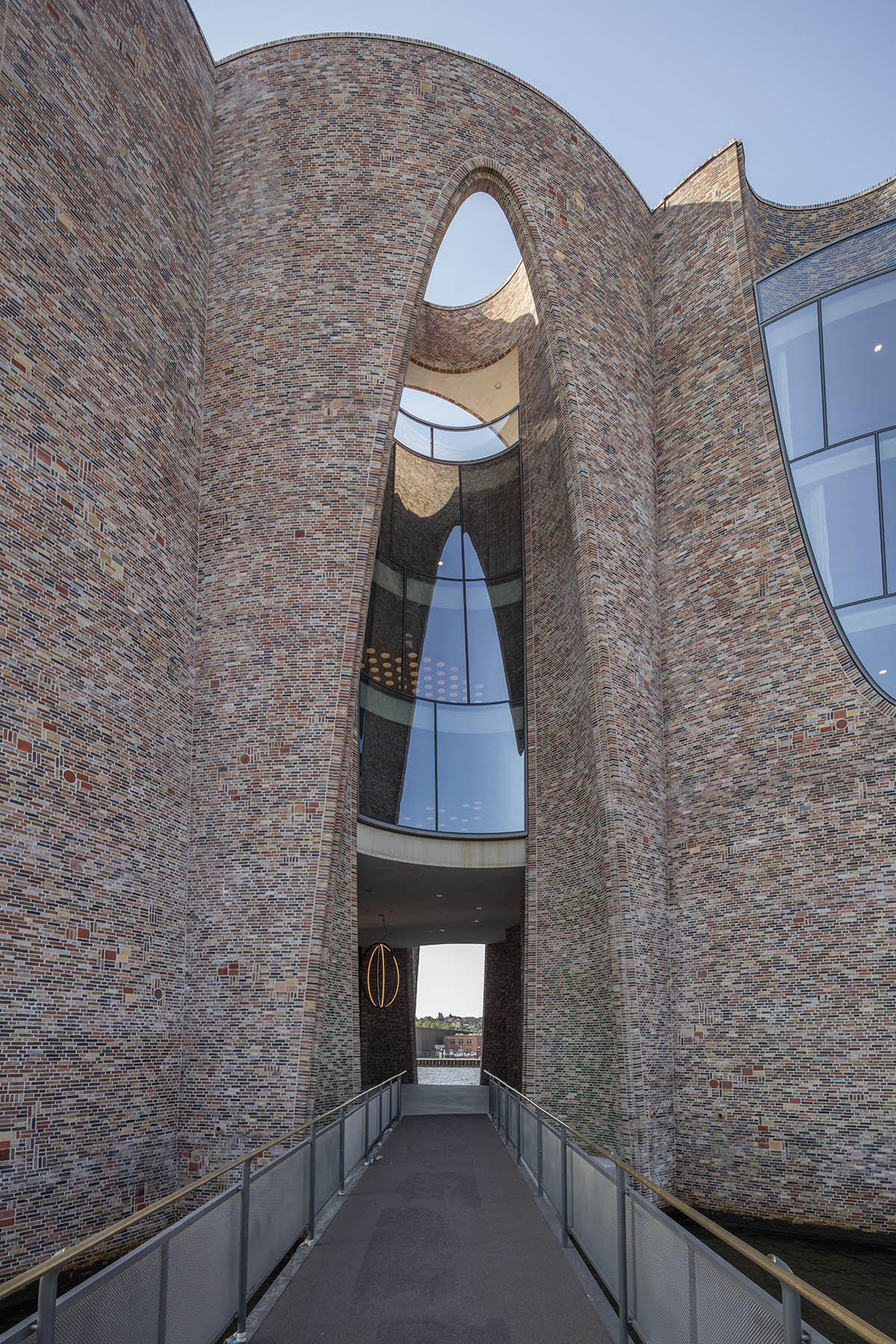 As one moves from the train station towards the harbour, Fjordenhus comes into view across the expansive plaza of the man-made Havneøen (The Harbour Island), a mixed-use residential and commercial area currently in development. From here, residents and visitors can access the ground oor of Fjordenhus via a footbridge or stroll along the jetty designed by landscape architect Günther Vogt.

The building features double-height entrance level which is dedicated to the relation of the building to the water, drawing attention to the plane where the structure plunges beneath the surface, its curved edges framing glimpses of the surrounding shores and harbour. 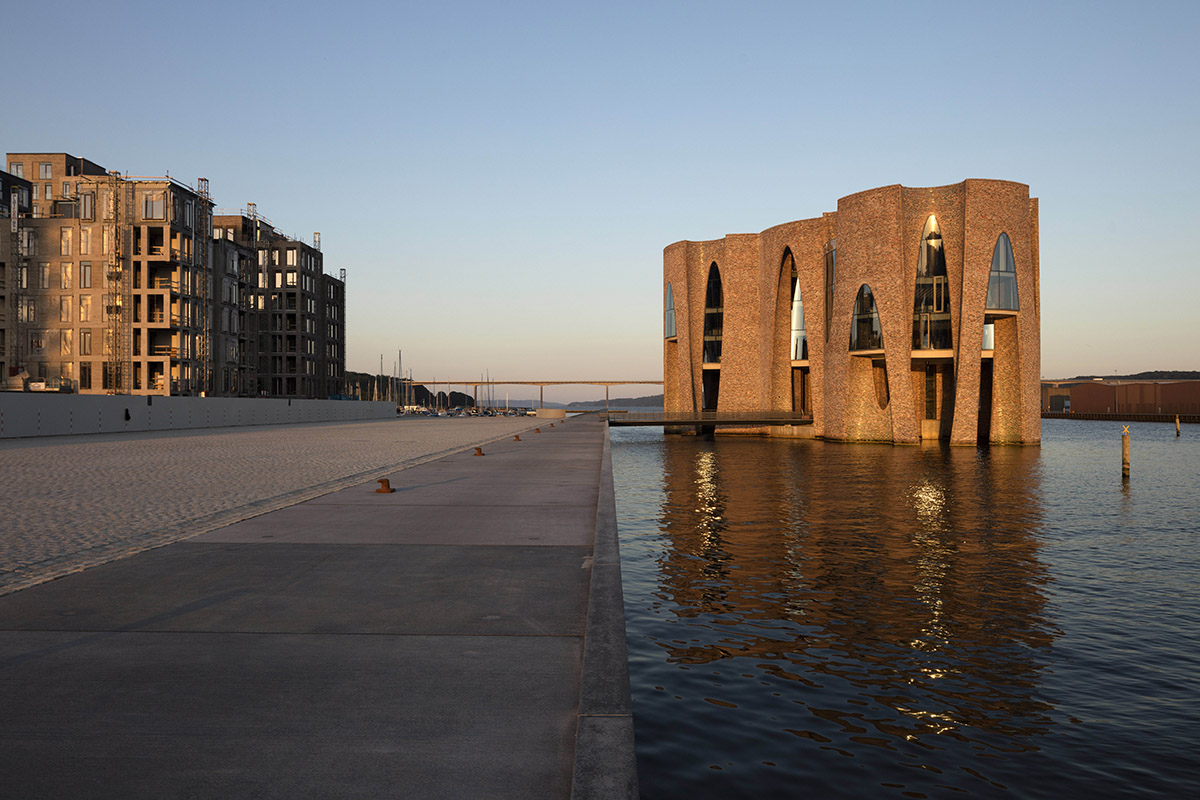 The building is blended with the harbour itself, and its two aqueous zones are visible from viewing platforms. The house completely reflects the relationship between the architectural spaces and Eliasson’s artworks engaging in a dialogue with the ever-changing surface of the water. 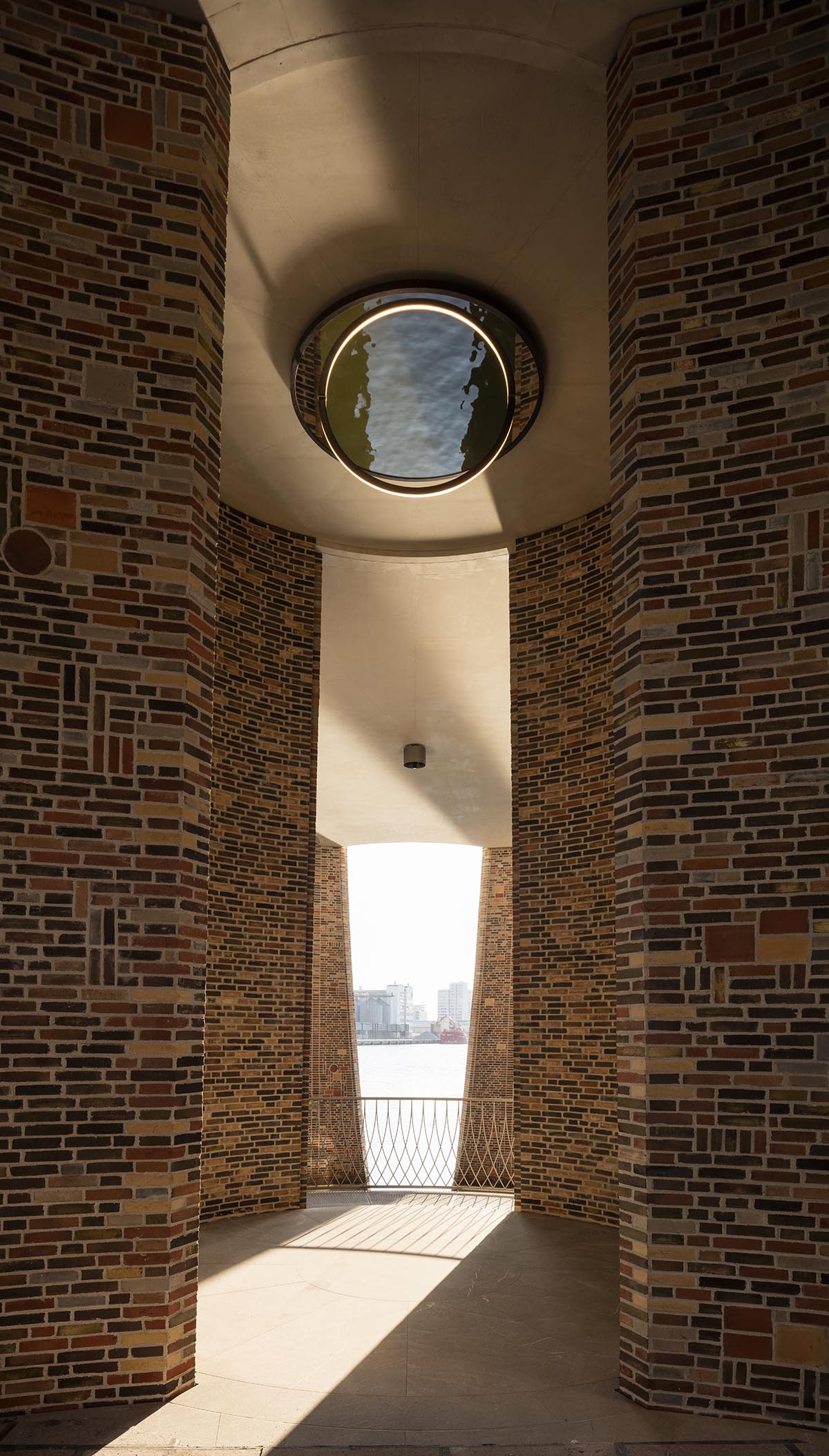 The house is comprised of four intersecting cylinders, Fjordenhus soars to a height of 28 metres (ninety-two feet). Rounded negative volumes have been carved from its facades of custom-glazed brick to create an extraordinary architectural statement of complex curved, circular, and elliptical forms, torqueing walls and parabolic arches.

"In its unique setting—a hybrid of natural and industrial-urban contexts—the building highlights Vejle’s future as a centre not just for today’s generation but also for generations to come," stated in the studio's press release. 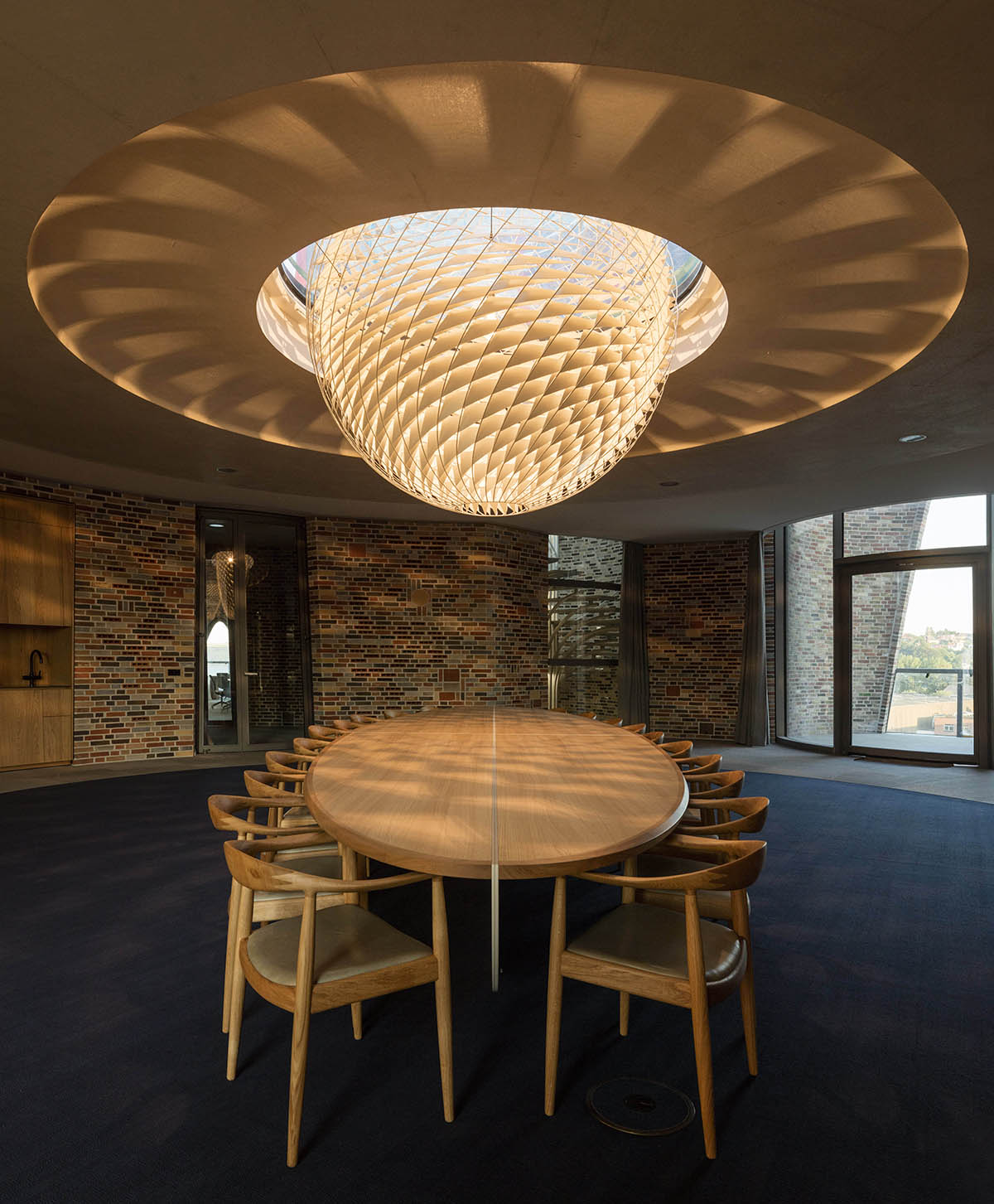 "I am very thankful for the trust shown by the Kirk Johansen family in inviting me, with my studio, to conceive Fjordenhus. This allowed us to turn years of research—on perception, physical movement, light, nature, and the experience of space—into a building that is at once a total work of art and a fully functional architectural structure," said Olafur Eliasson. 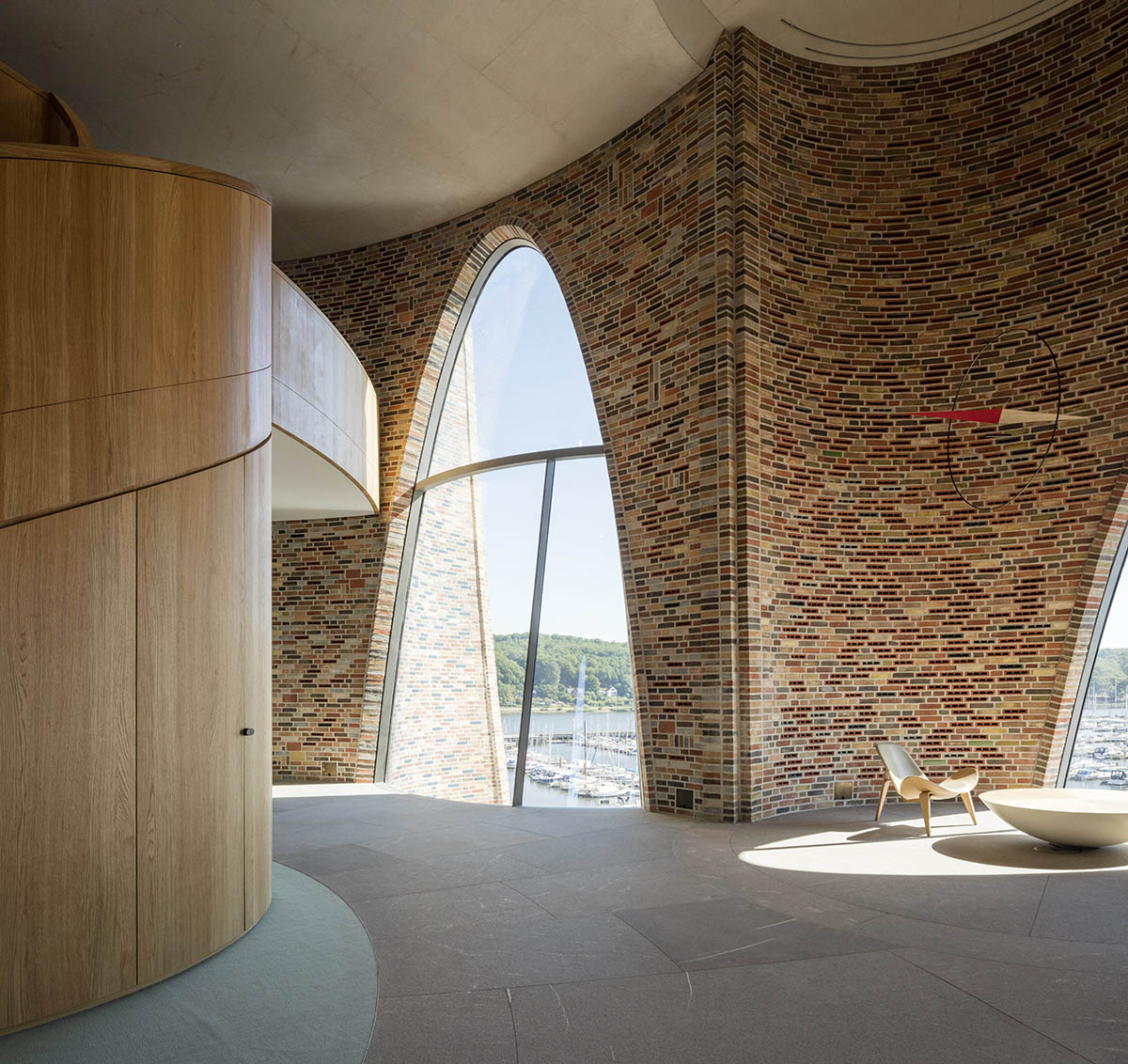 "In the design team, we experimented from early on with how to create an organic building that would respond to the ebb and flow of the tides, to the shimmering surface of the water, changing at different times of the day and of the year," he added.

The curving walls of the building transform our perception of it as we move through its spaces. I hope the residents of Vejle will embrace Fjordenhus and identify with it as a new landmark for the harbour and their city." 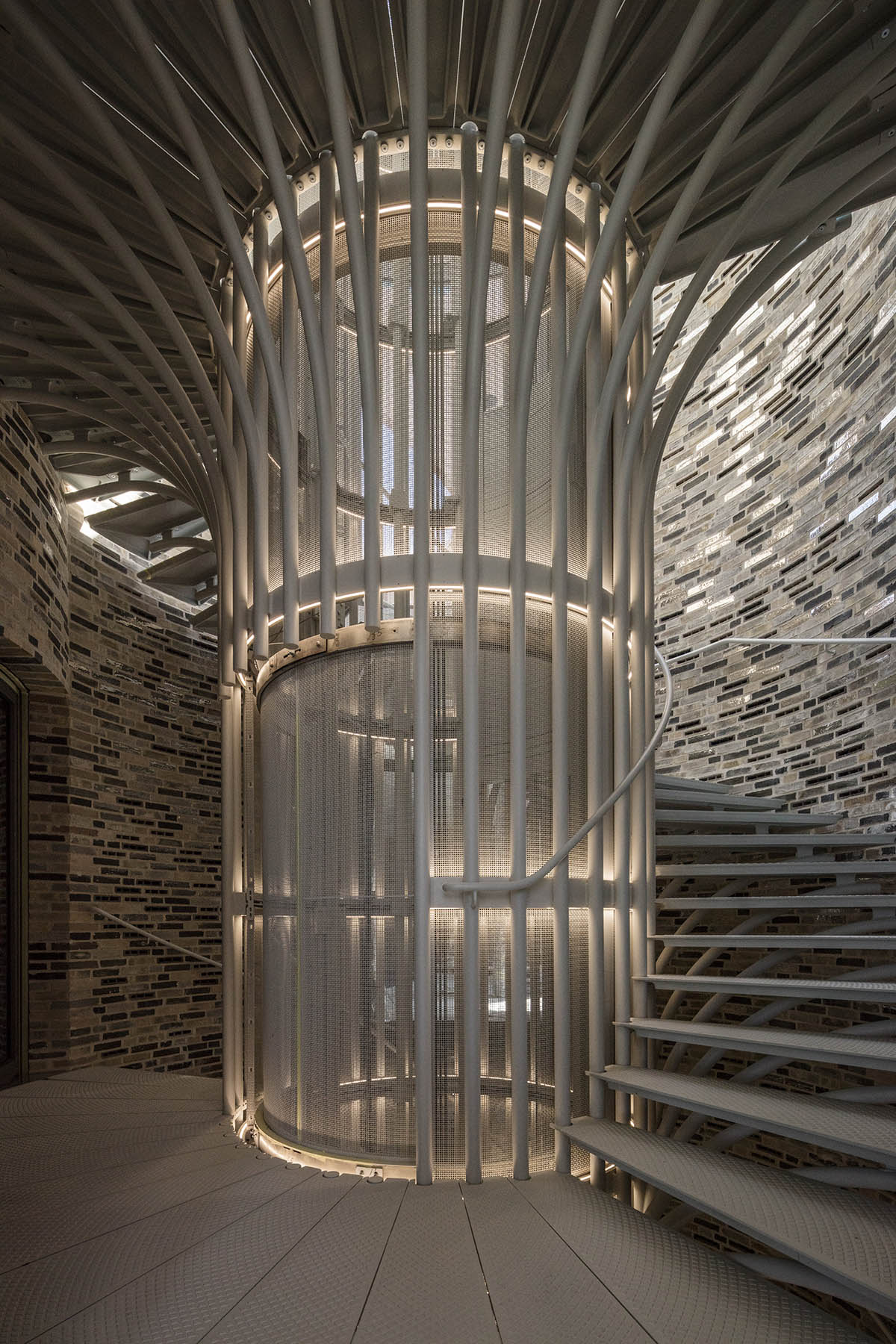 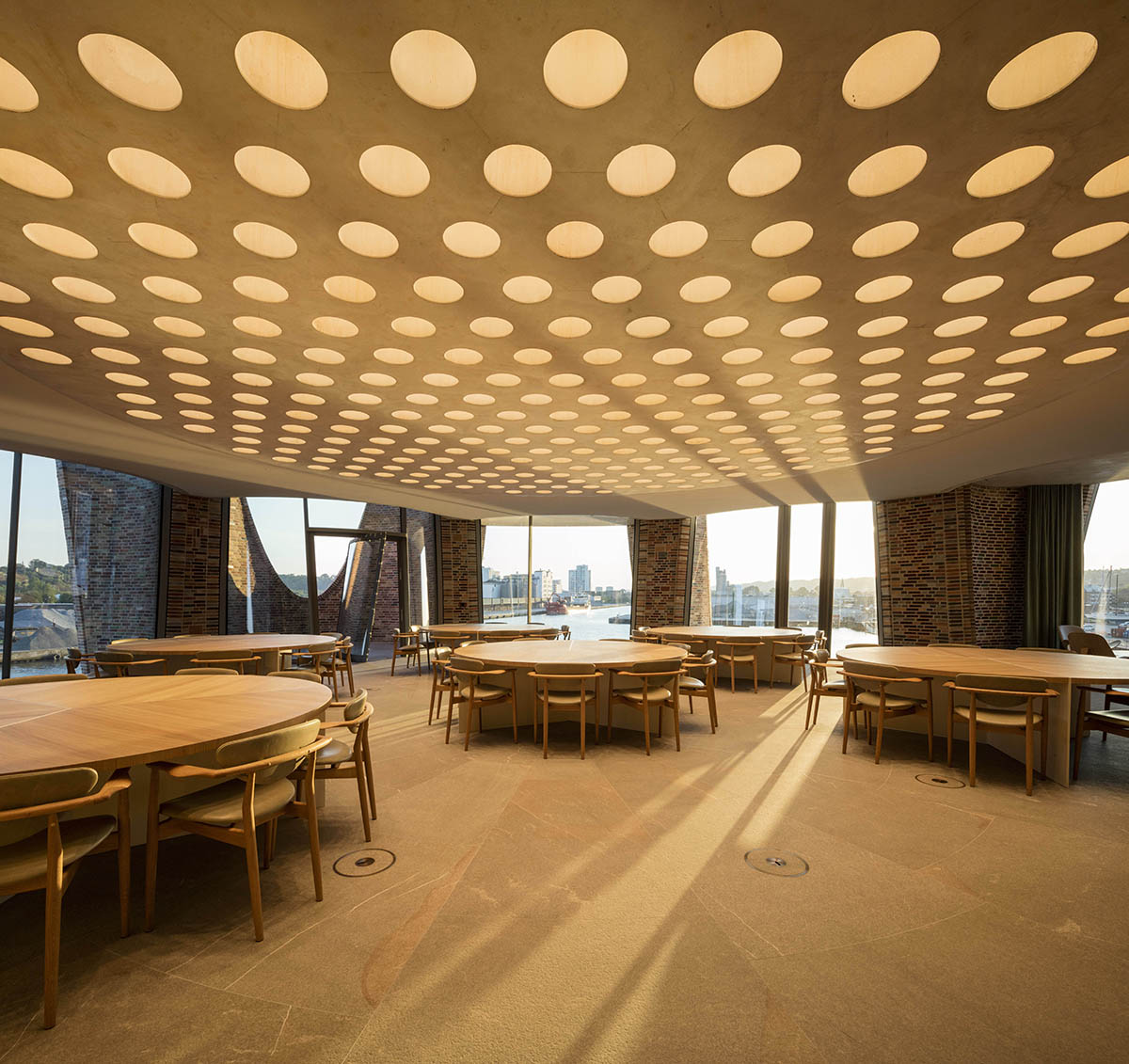 "Throughout the process, we were very attentive to the choreography and sequencing of spaces, using modulation of light and acoustics to heighten all the building’s sensory aspects. One experiences Fjordenhus as a sculptural presence in the harbour, an interaction of solids and voids," said Sebastian Behmann, head of design at Studio Olafur Eliasson.

"These voids—the main points of interaction between inside and outside—are the major design element and form the parabolic, multi-story windows.  Our clients grasped the value of devoting the ground story of the building, alongside the plaza with its jetty, to the experience of the building’s relation to its environment—and to the public." 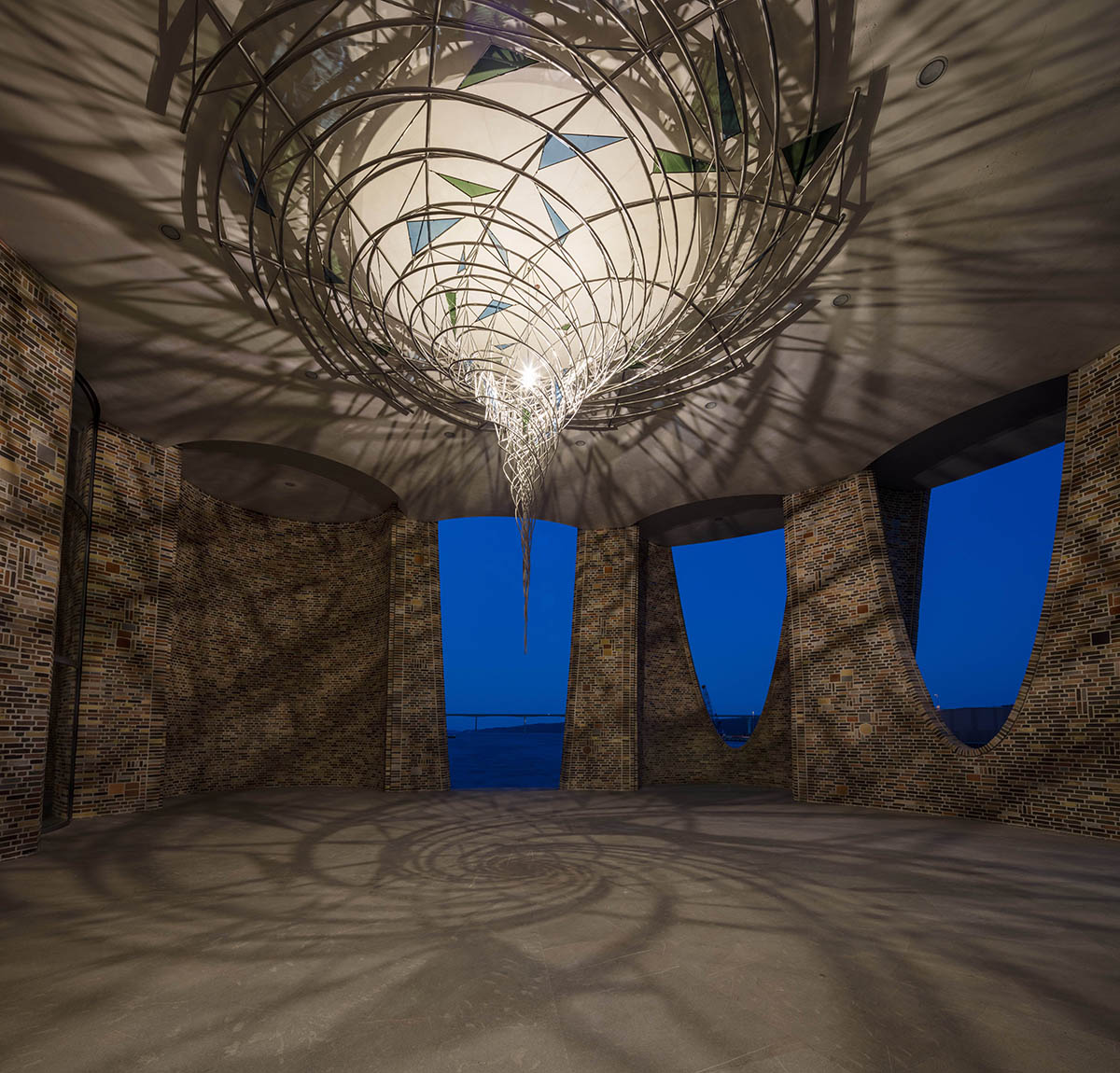 The completion of Fjordenhus marks the shift of Studio Olafur Eliasson’s major architectural activities to a new international office for art and architecture, Studio Other Spaces (SOS), founded by Eliasson and his long-time collaborator, architect Sebastian Behmann, in Berlin in 2014.

As an architectural counterpart to Studio Olafur Eliasson, Studio Other Spaces will be the vehicle for Eliasson and Behmann to carry out large-scale interdisciplinary and experimental architectural projects of a scope similar to Fjordenhus, in addition to works for public space.  Projects are currently in development around the world, from Paris to Addis Ababa.