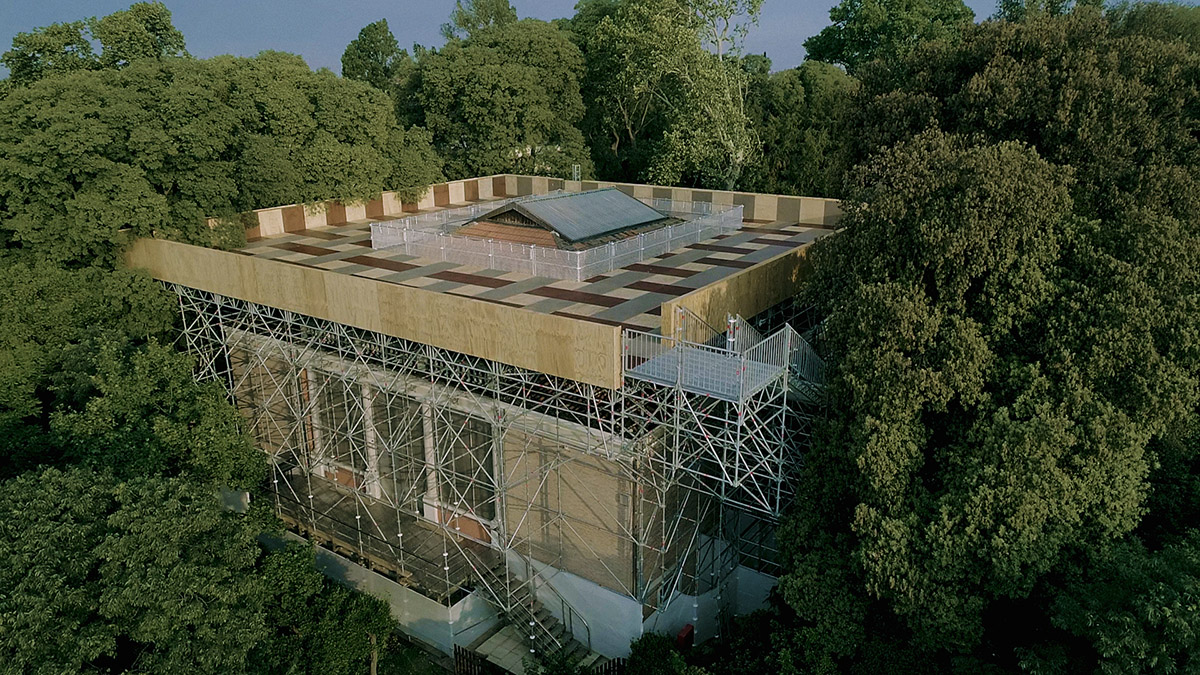 The British Council has unveiled Island at the British Pavilion for the 16th Architecture exhibition - Venice Architecture Biennale 2018, showing the respond of the curatorial team of Caruso St John Architects with artist Marcus Taylor to this year’s theme "Freespace" through the construction of a new public space at the Giardini, on the roof of the original building.

Though in the past few Architectural Biennales, the Pavilion has held curated exhibitions on architectural themes, the curatorial team said that they have taken a different approach for a change. "There are no exhibits; instead, we have made a construction that you are free to wander about," said the curatorial team. 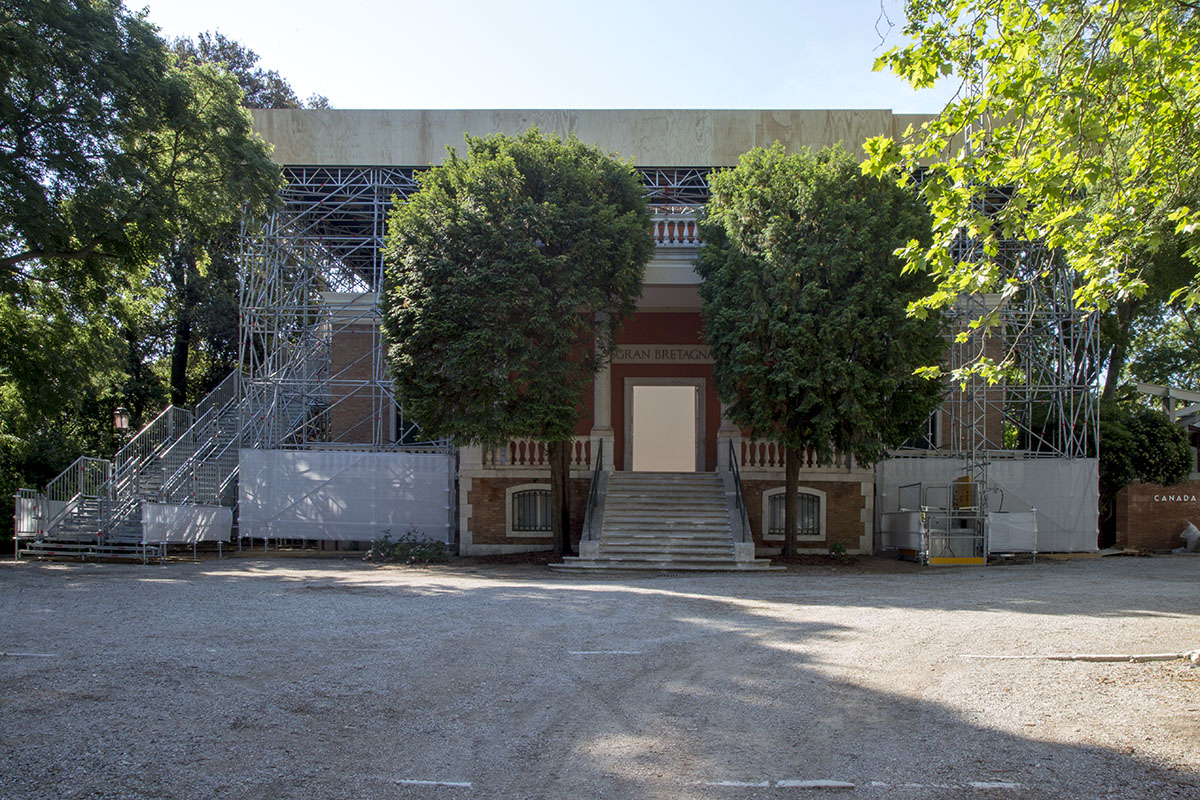 When the visitors arrive at Island, they have two choices: one to the structure above the roof and one to the interior. The interior route takes visitors to the emptiness; an echo of sounds and memories of the 'Abandoned Pavillion', which is stated by the Island’s curator team.

It is the intention of the curators not to represent anything directly, but the pavilion will hold memories of things that happened there, with the empty buildings having a different scale, light and acoustics. They believe that pavilion will come to life with the meetings and conferences that they have planned until the end of the Biennale. 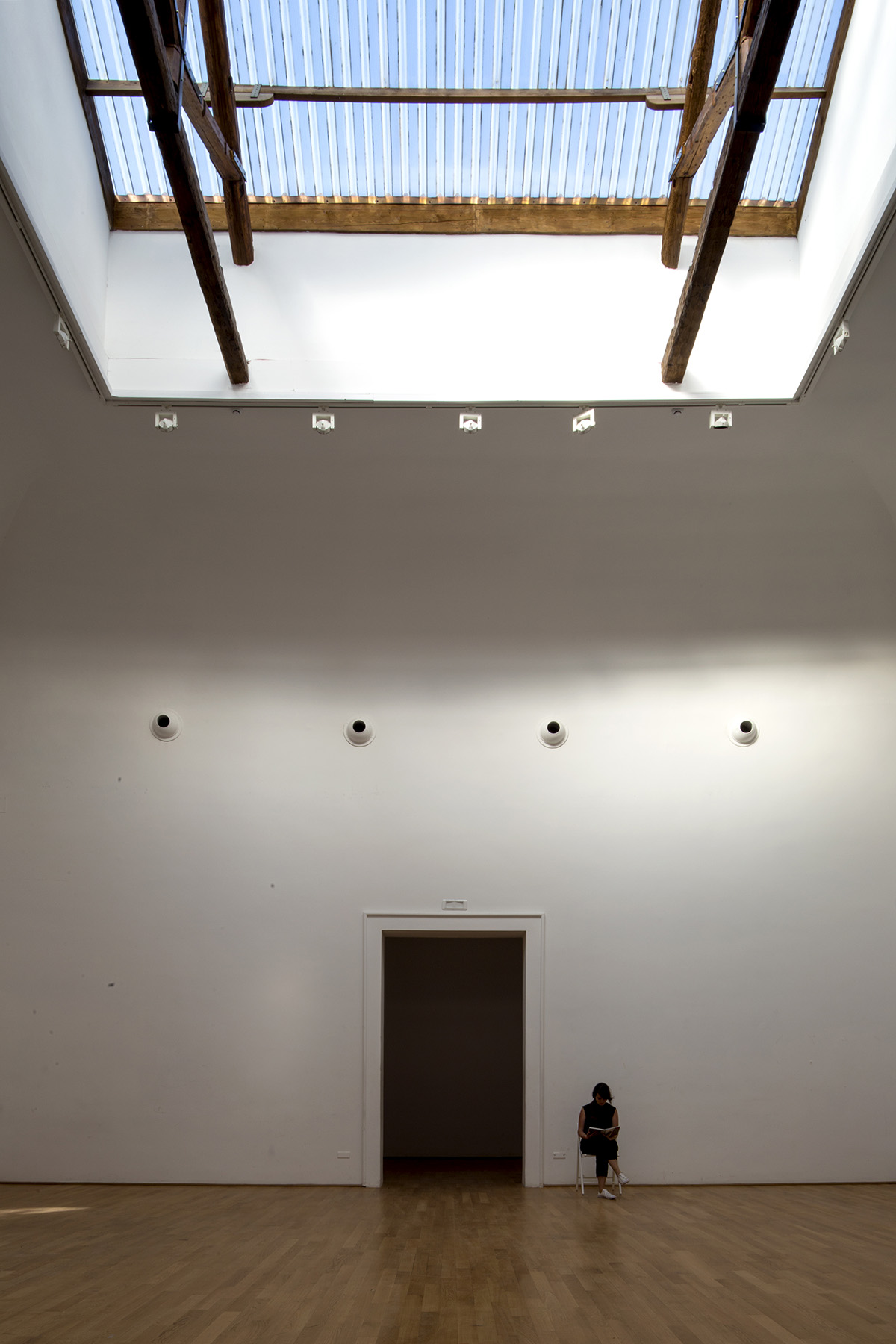 Whilst; the side route, the scaffold staircase, takes visitors to 'The Platform' that is a wooden stage above the Pavilion. The Pavilion's manifesto stated that "the scaffolding and stairs create a sense of reconstruction and restoration. The peak of the Pavilion’s roof projects up through the floor at the centre of the space, suggesting both an island and a sunken world beneath." 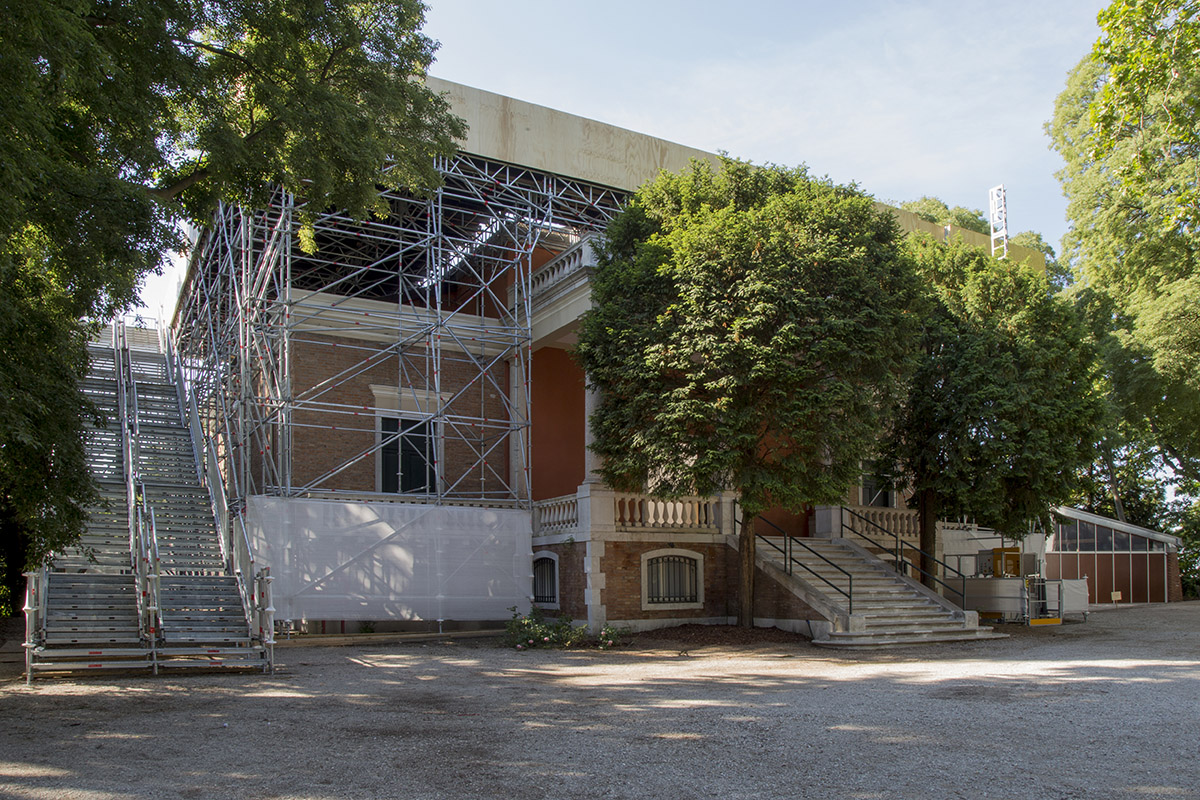 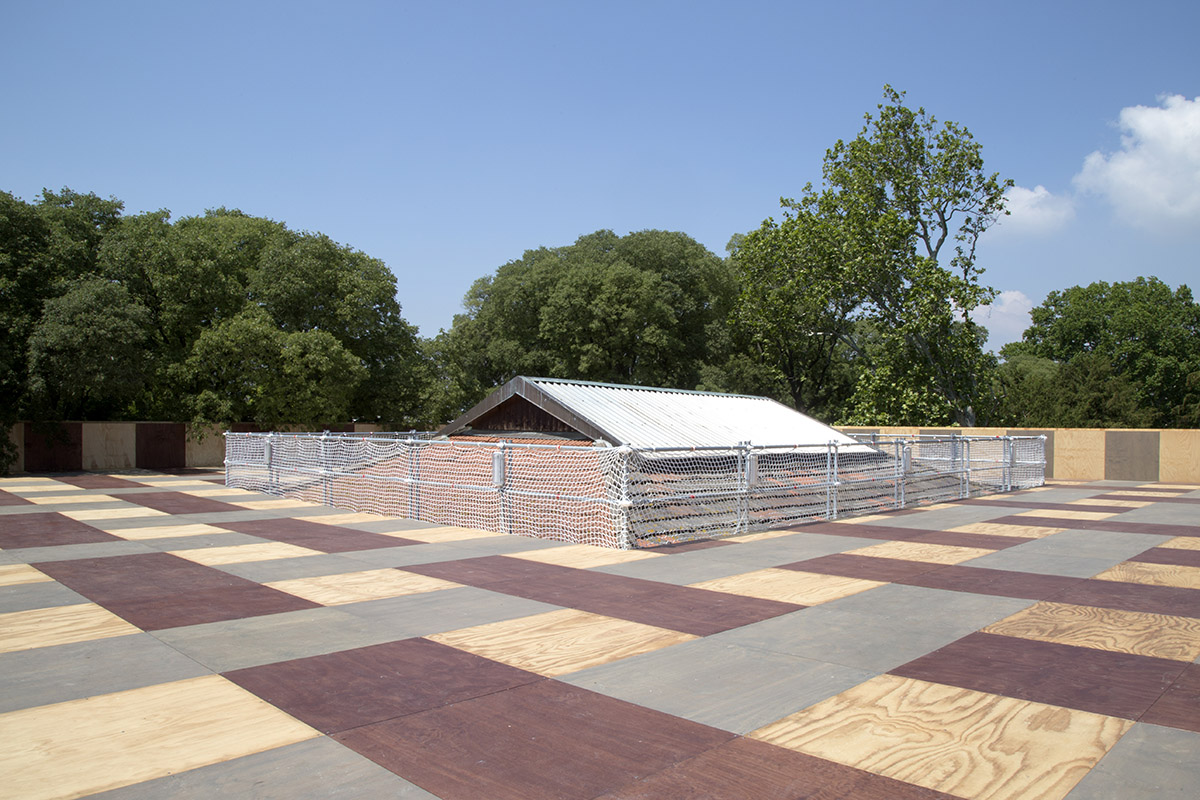 The platform that is open to the sky amongst the tree-tops of the Biennale venue - Giardini having a pattern on the floor reminiscent of an Italian piazza where tea will be served at 4 p.m. during the exhibition along with the programme of events in the two spaces. 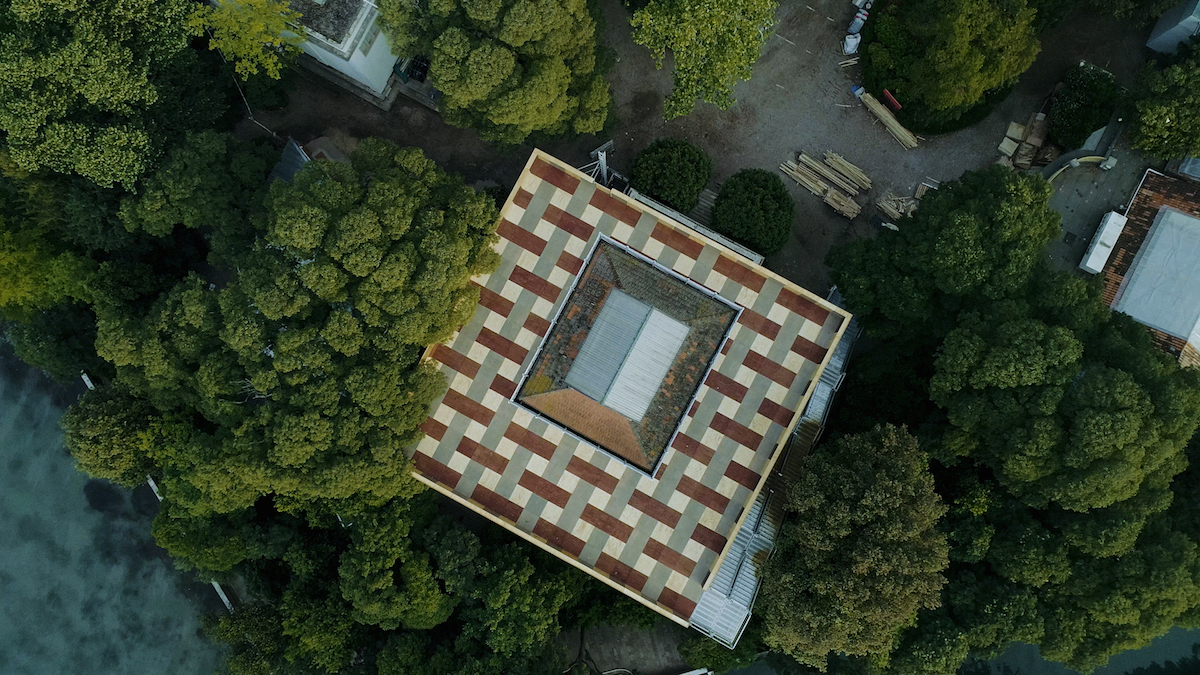 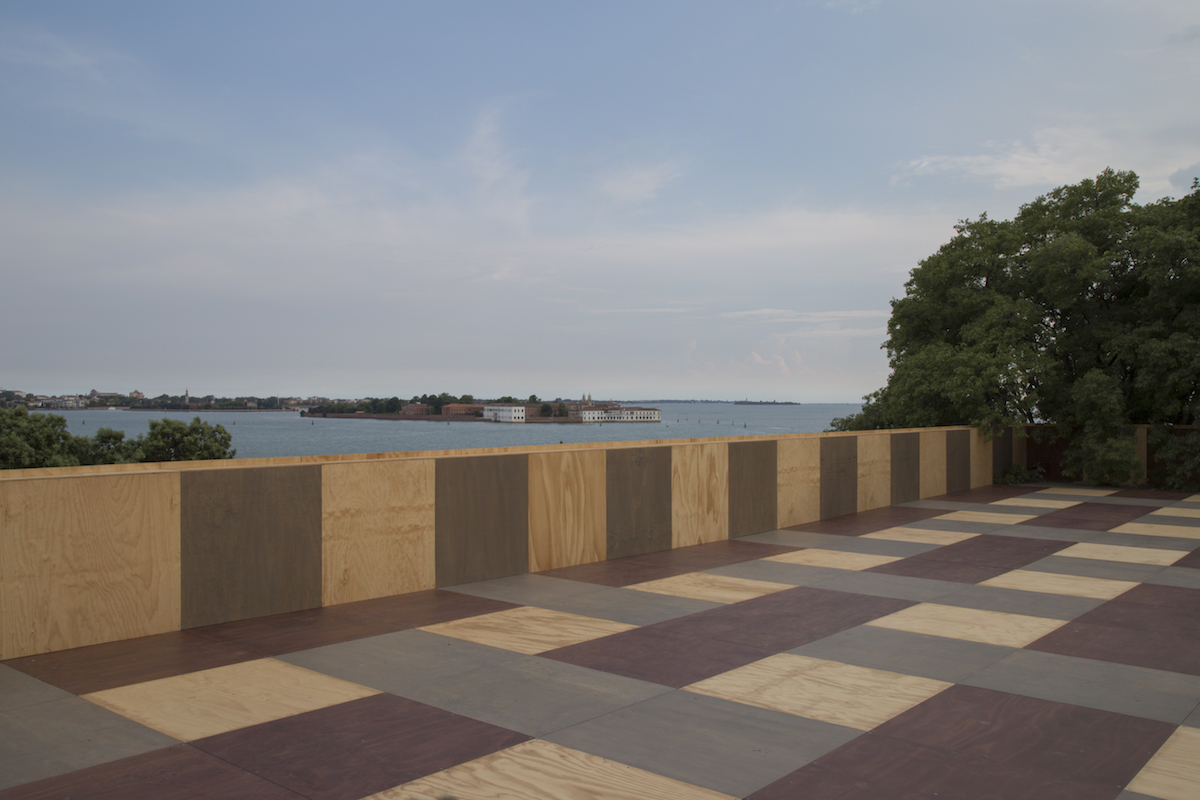 The Pavilion was awarded the "Special Mention as National Participation to Great Britain" for the Courageous proposal that uses emptiness to create a “freespace” for events and informal appropriation, providing this opportunity for "reflection, discussion and open interpretation."

Curators gave references to both Shakespeare’s Tempest and young British spoken-word artist Kate Tempest. They said that "the importance of these references is that there are aspects of sadness, contemplation, even of desperation in the themes of this project, but also of poetry and celebration." 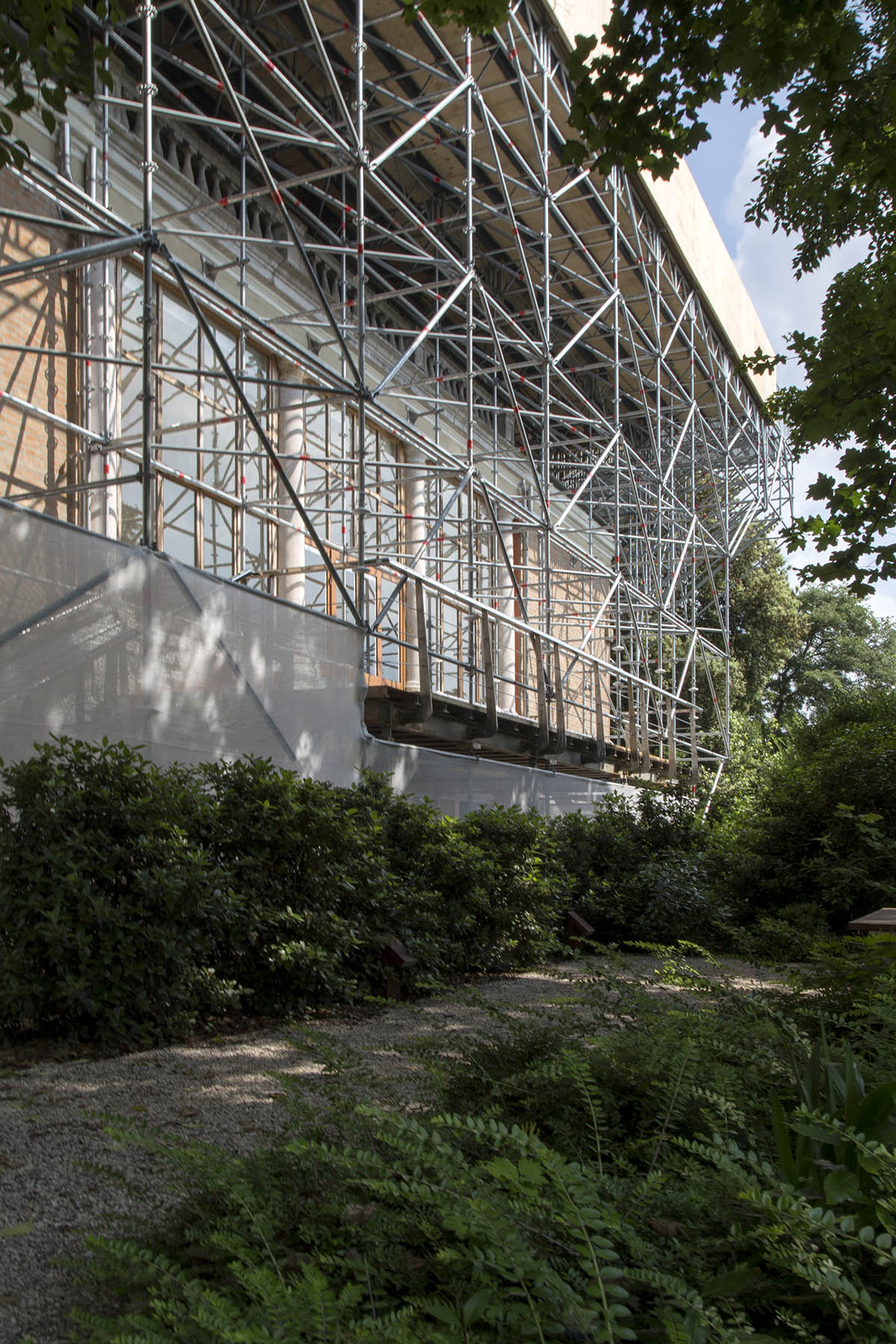 "In past Biennales, the Pavilion has held curated exhibitions on architectural themes.  This year, we have taken a different approach.  There will be no exhibits; instead we have realised a structure that can be experienced like a building.  There are many ways to interpret the experience of visiting Island and the state of the building suggests many themes; including abandonment, reconstruction, sanctuary, Brexit, isolation, colonialism and climate change. It is intended as a platform, in this case also literally, for a new and optimistic beginning. It is forward-looking whilst acknowledging the past, whether good  or bad." Looking past, it has summarized that "the building itself, opened in 1897 as a tea house within the Giardini, and adapted for use as the British Pavilion at La Biennale di Venezia  1909, represents a moment in time when the world as divided along colonial lines."

"It has stood through two world wars, fascism, the formation of the European Community, the fall of communism and now major concerns of climate change and rising  sea  levels,  Venice being a  city  more  vulnerable  than  most." Eventually, the curators pointed that; "these are challenges for all of us, the way we build, design cities, consume and live our lives." Sarah Mann, Director of Architecture Design Fashion at the British Council and Commissioner of the British Pavilion 2018 said:

"This year’s winning proposal, Island, will represent Great Britain at the most influential gathering for contemporary art and architecture anywhere in the world.  We are thrilled to present this new structure for the British Pavilion which breaks with convention, creating a place for visitors to meet and engage with the building and each other, in a new way. The accompanying programme of events will highlight the Pavilion’s role as a space for debate, for the exchange of ideas and for visionary thinking." 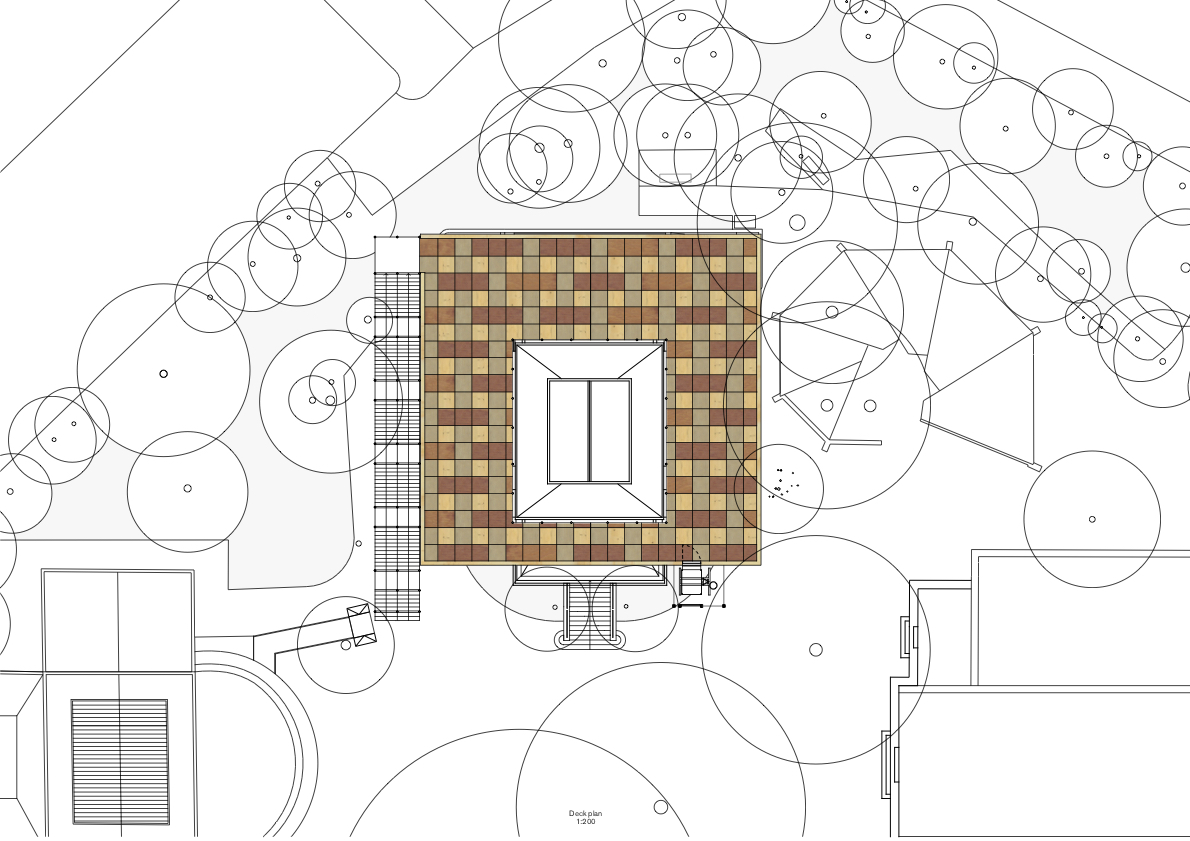 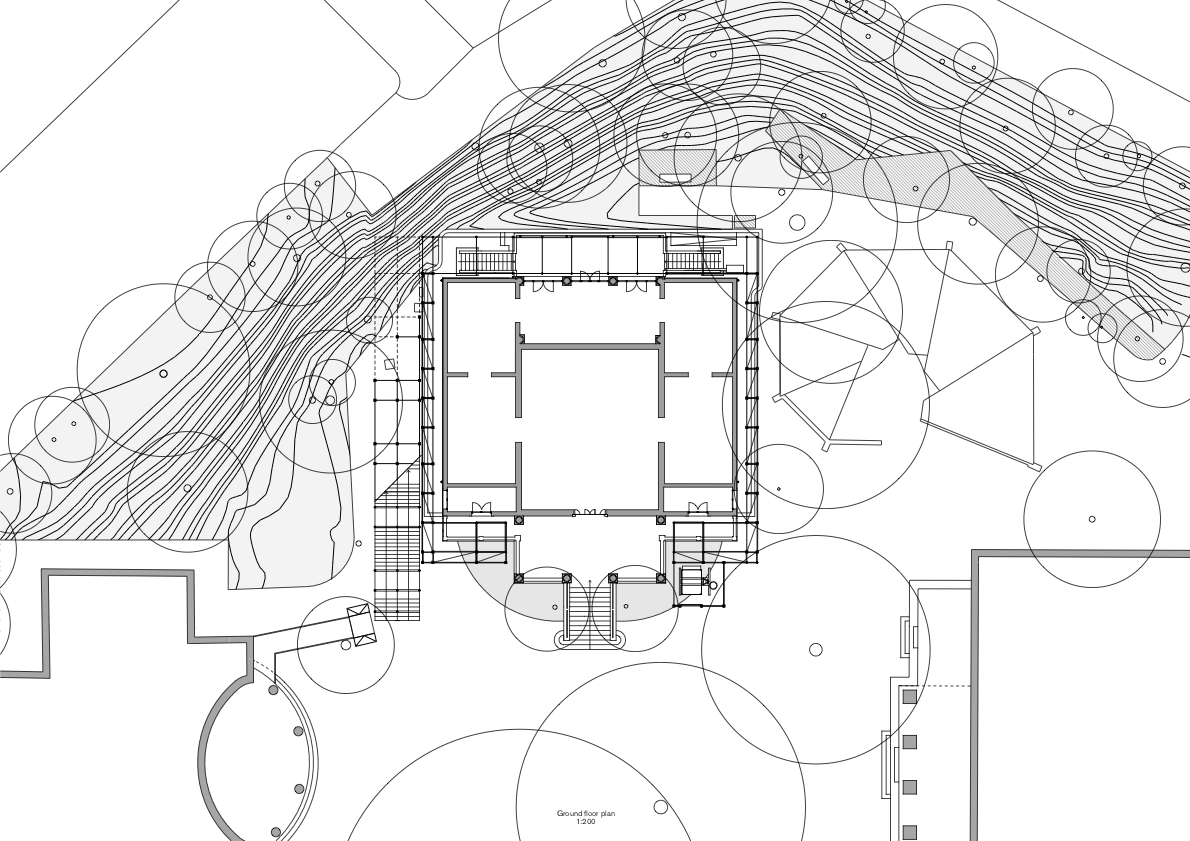 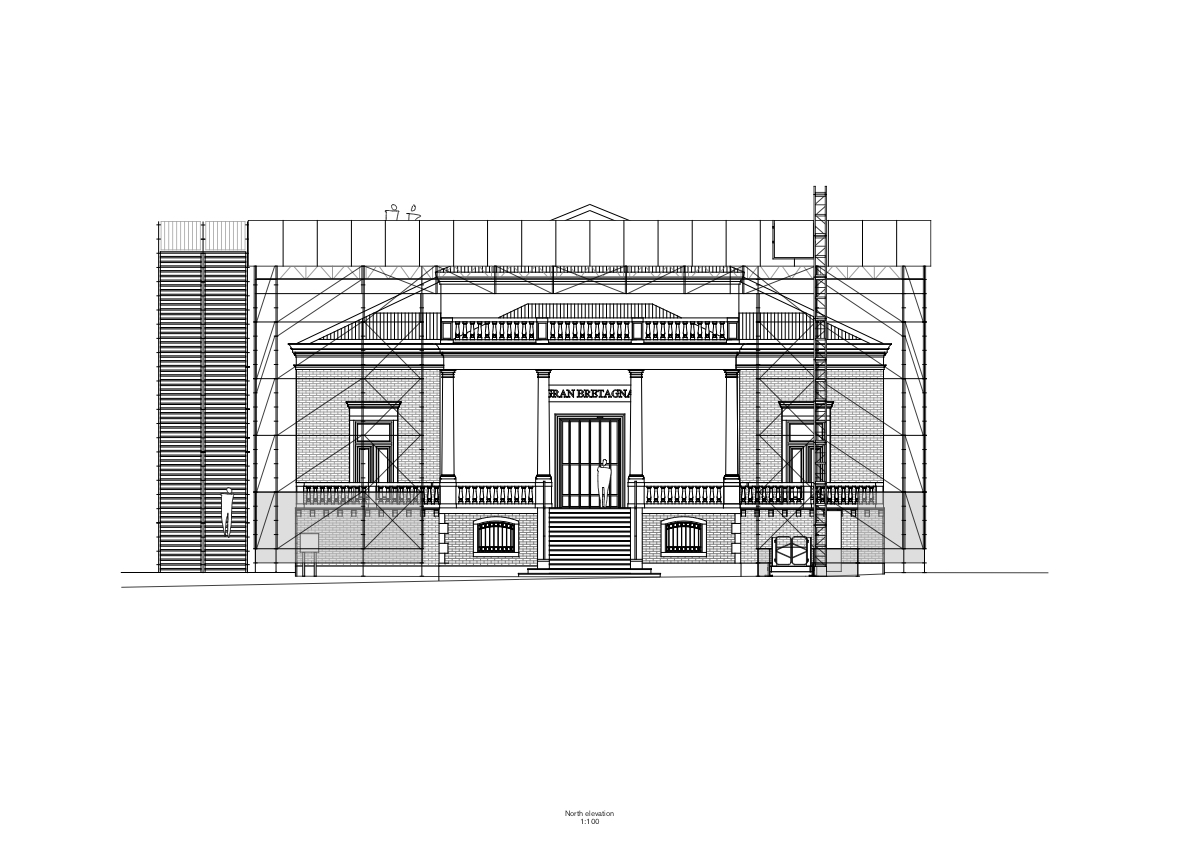 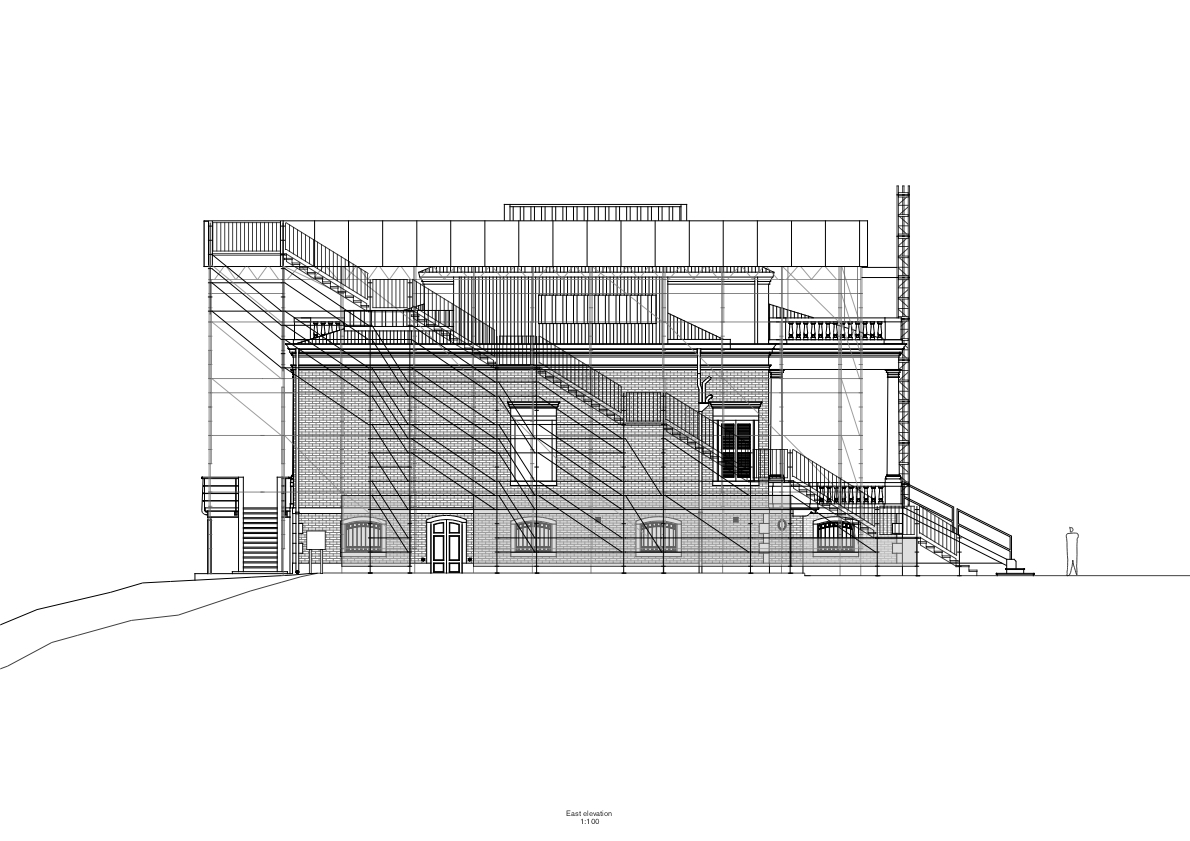