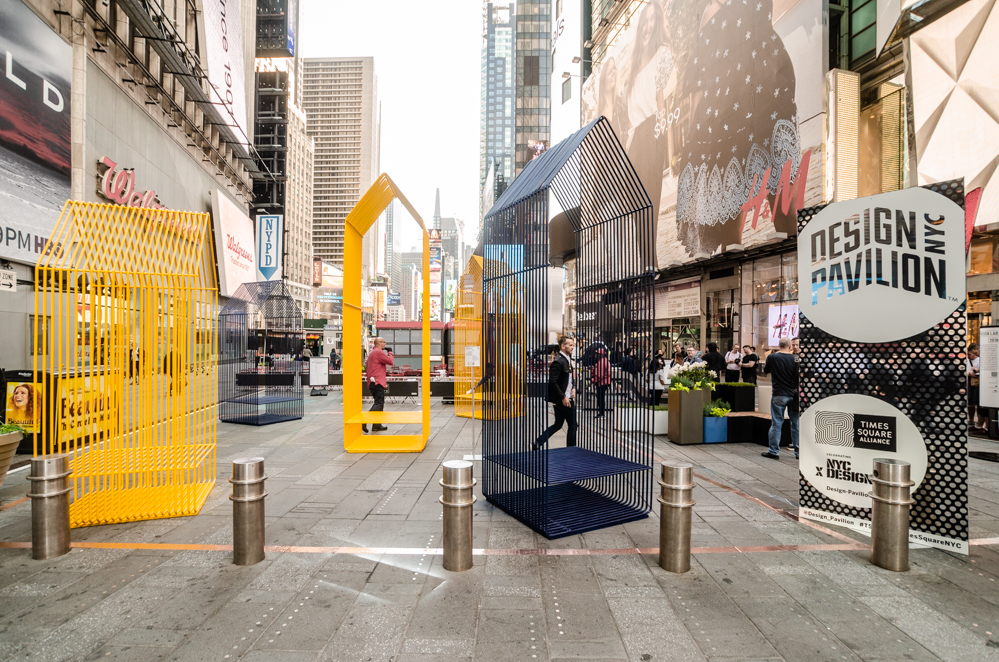 "Like NYC, Times Square is constantly changing and churning, and to both respond to and shape that churn we've wanted to tap the best design talent in New York City. A focal point for the challenge of that changing environment is Times Square's public spaces, where we want design that is both distinctive and functional and different from that which has come before," Tim Tompkins, president of the Times Square Alliance, said in a statement.

Times square has always been full of costumed characters beckon to tourist crowd under the pulsing lights of towering digital billboards and for the last 6 years, its caretaker — the Times Square Alliance —has been using the famous plaza as a ground for NYCxDesign Pavilions. NYCxDesign aka New York Design Month (since events happen throughout May),  which is a collaboration between New York City Economic Development Corporation, City agencies and a committee composed of design institutions, entrepreneurs, curators, editors and designers), officially kicked off few days ago. 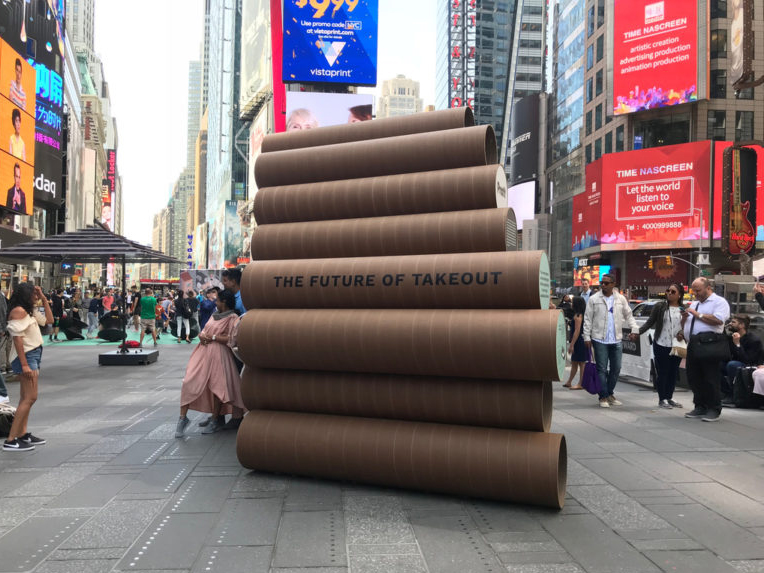 Ideas for the future of take-out by Pratt Institute students. Image © Susan Xu 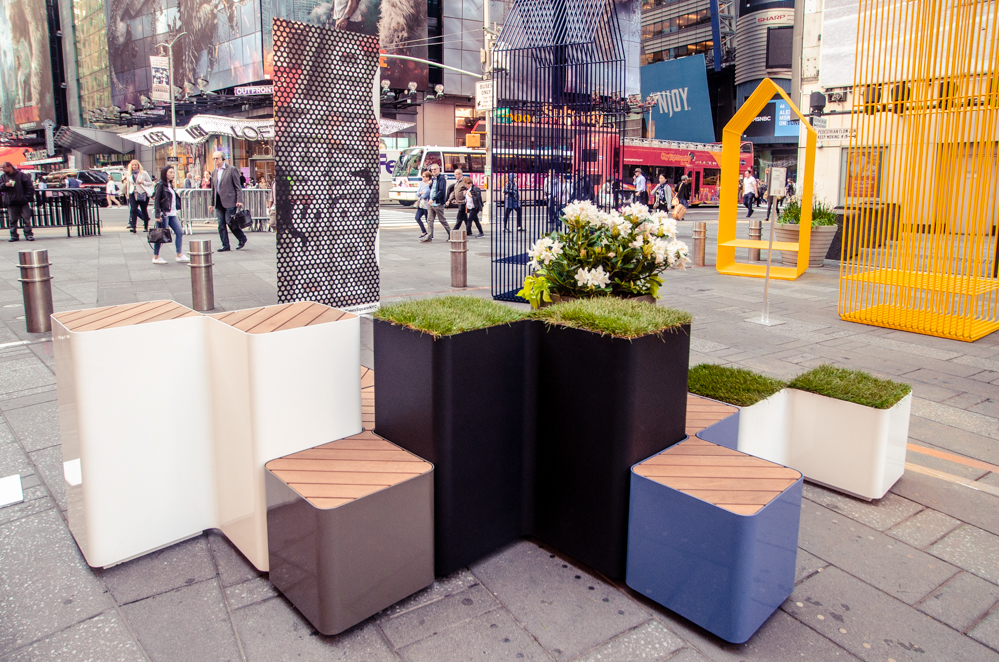 Island Collection by Brad Ascalon. A series of modular seating and planter boxes that can be configured to fit practically any space. Image © Times Square Alliance

In 2017, NYCxDesign hosted nearly 350,000 visitos from across the country. As it was in previous years, hundreds of events including trade shows, exhibitions, product launches and talks, it showcases the latest in furniture and product design, fashion, architecture and more spill over into all five boroughs of New York. Although there are events throughout the city, the Times Square features 11 interactive installations.

“Times Square looks forward to topping last year’s success as a hub for NYCxDESIGN and the Design Pavilion, bringing design talent from around the world to over 400,000 visitors a day at the Crossroads of the World,” said Tim Tompkins, President of the Times Square Alliance. 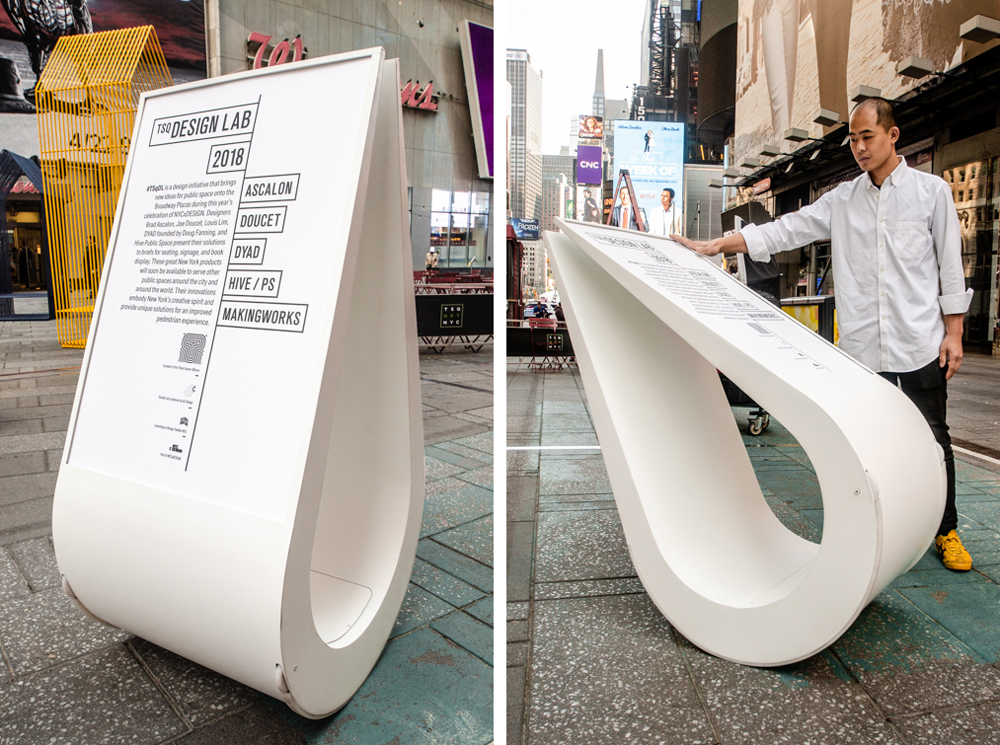 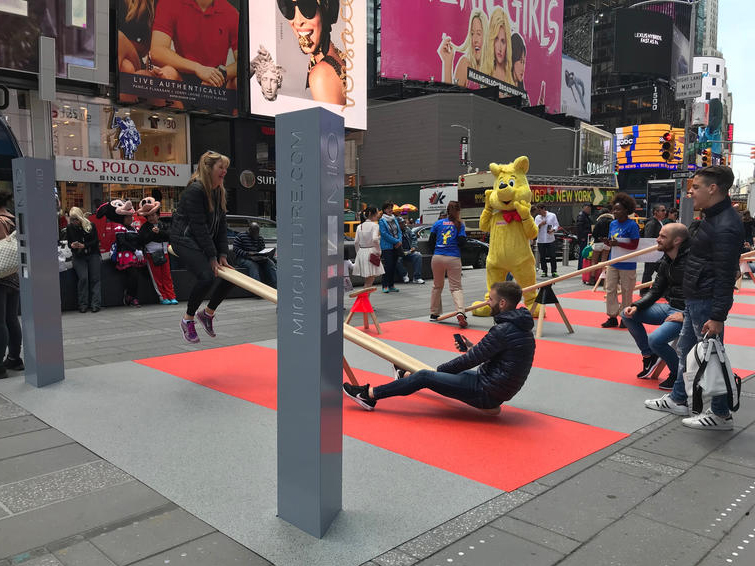 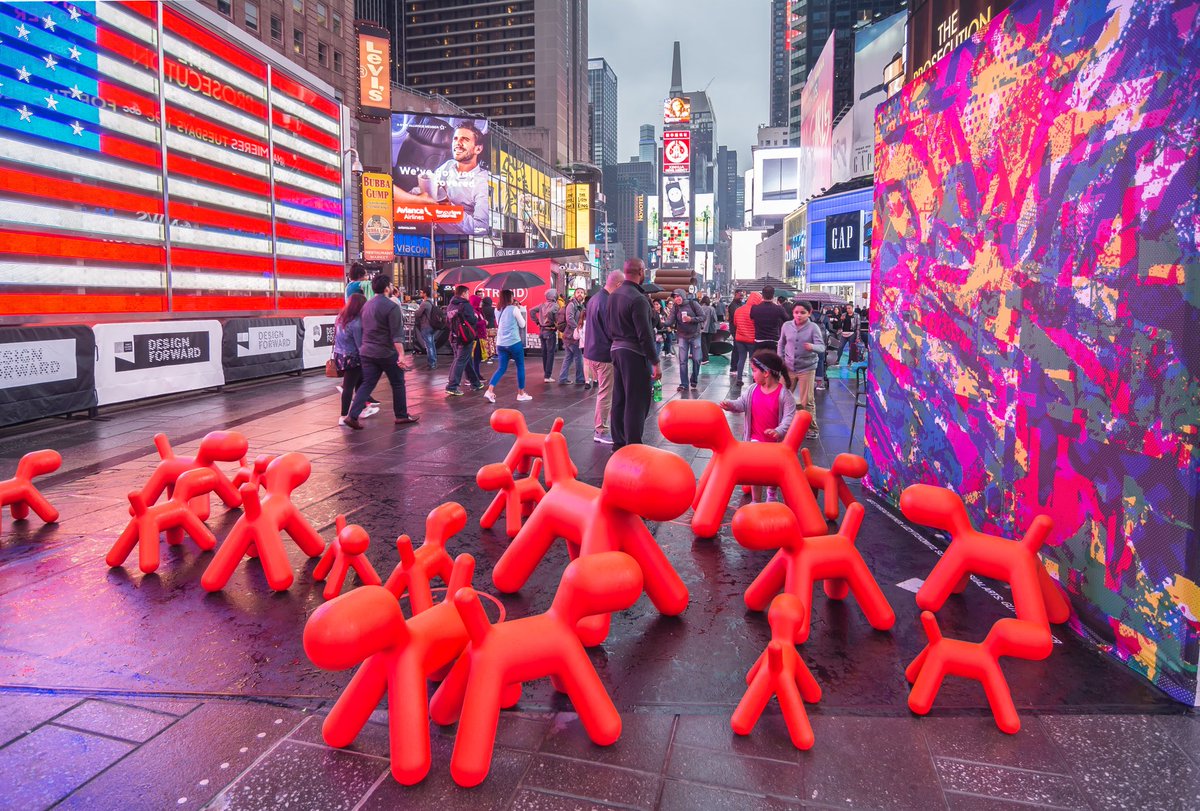 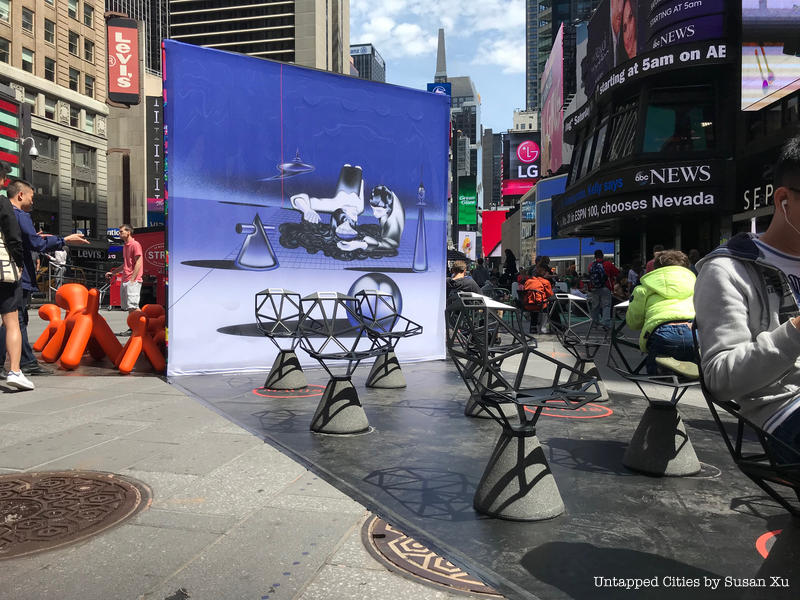 “Since its founding, New York City’s official design week has united New Yorkers, students, emerging talent, and industry leaders in exploring and amplifying the power of design. Next year’s NYCxDESIGN celebration will be sure to spotlight the city’s most innovative and exceptional designers while continuing to drive economic activity within the five boroughs,” said NYCEDC President and CEO James Patchett. 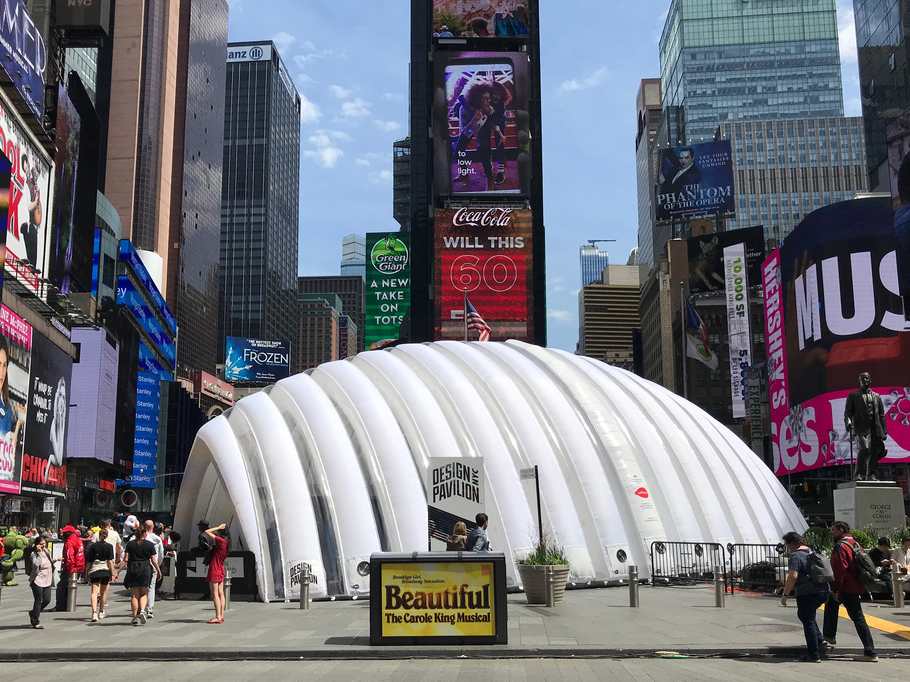 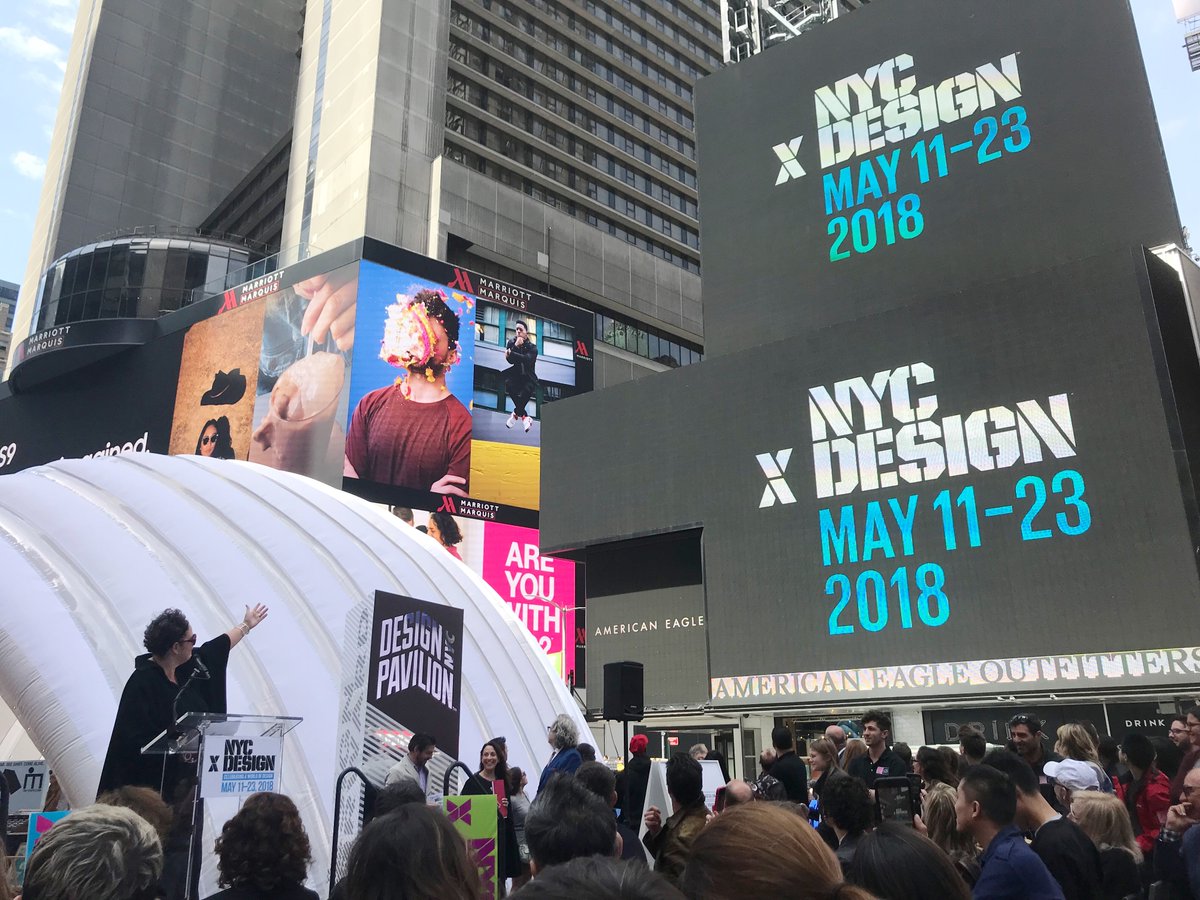 A giant white bubble is part of the NYCxDesign exhibition taking place. 25-foot-high inflatable hub designed by UK-based architecture and design brand “INFLATE". The structure forms a shell which hosts special exhibitions including New York Artists: a project of 50 magazine covers by 50 artists in celebration of New York magazine’s 50th anniversary; a showcase of digital fixtures from Duggal Visual Solutions; a pop-up shop from The American Design Club. 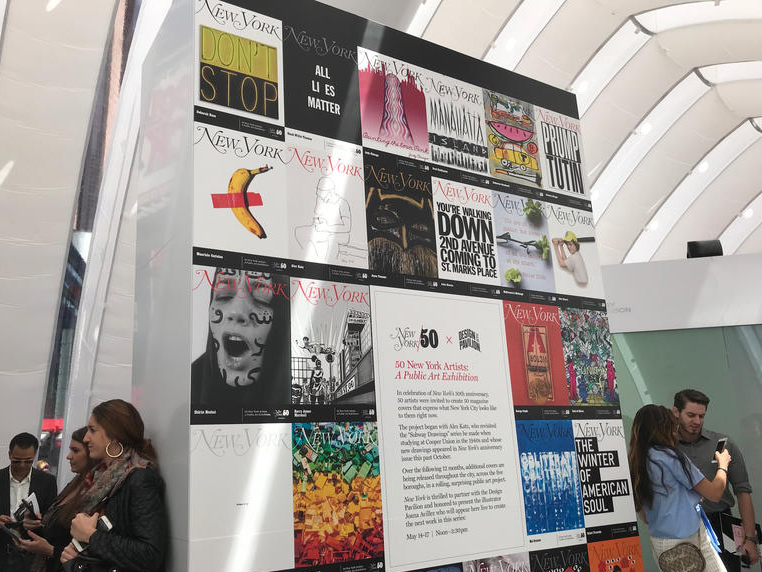 Inside of Inflate. Image © Susan Xu

Apart from the pavilion, architectural pavilions rest on the pedestrian plazas of Times Square. The five installations are called "Island Collection," "Re: Post," "The Village," "Title Wave" and "Drop Sign," and were created by designers Brad Ascalon, DYAD, Joe Doucet, Hive Public Space and Louis Lim. 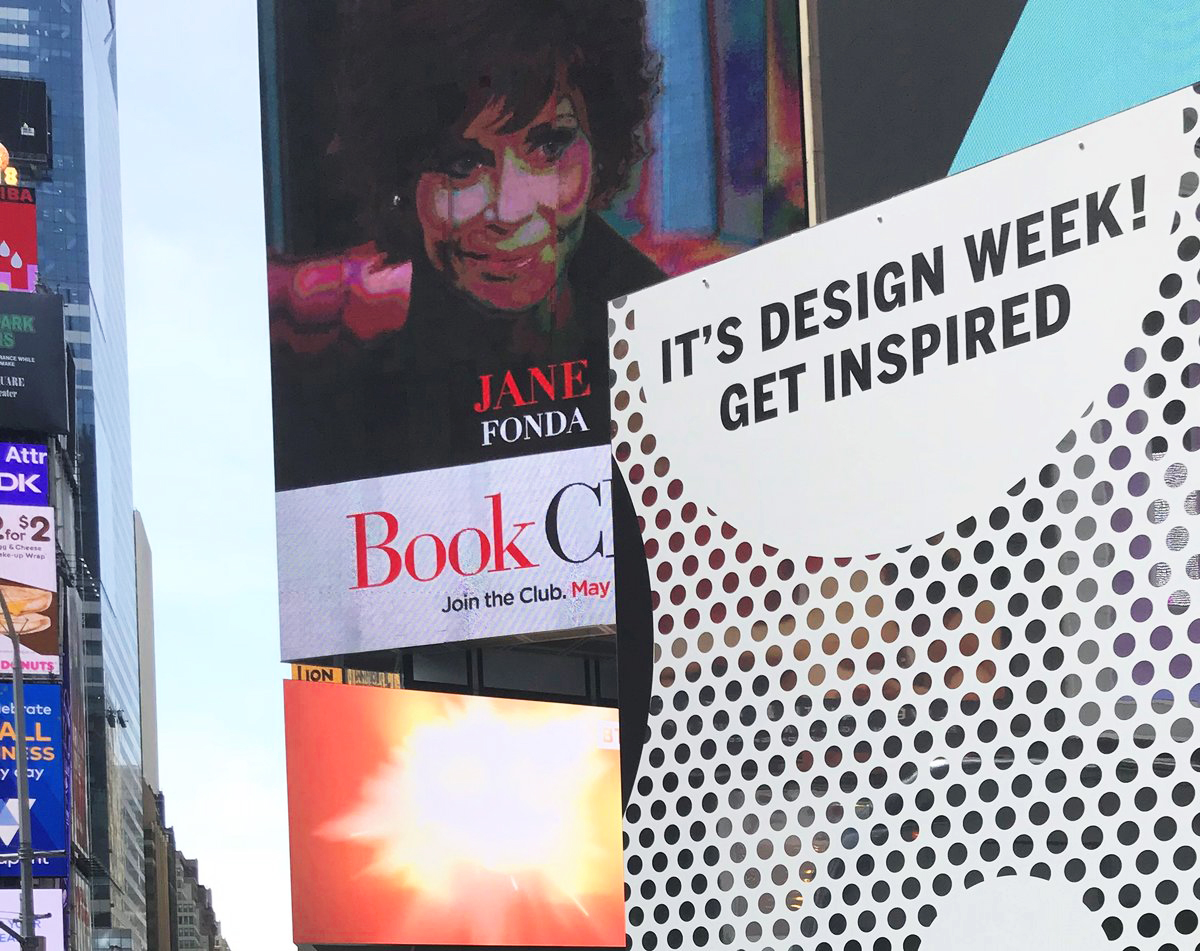 It's Design Week!  Do not forget to stop by Times Square if you are in the city and get inspired!

Top Image: The Village by Joe Doucet. A series of large-scale seating structures that bring a sense of home to the urban environment. The colorful metal rod-constructed pods have a distinctive pitched roof that are identifiable from a distance as a meeting point.  Image © Dave Pinter

Visit nycxdesign.com for the full calendar.