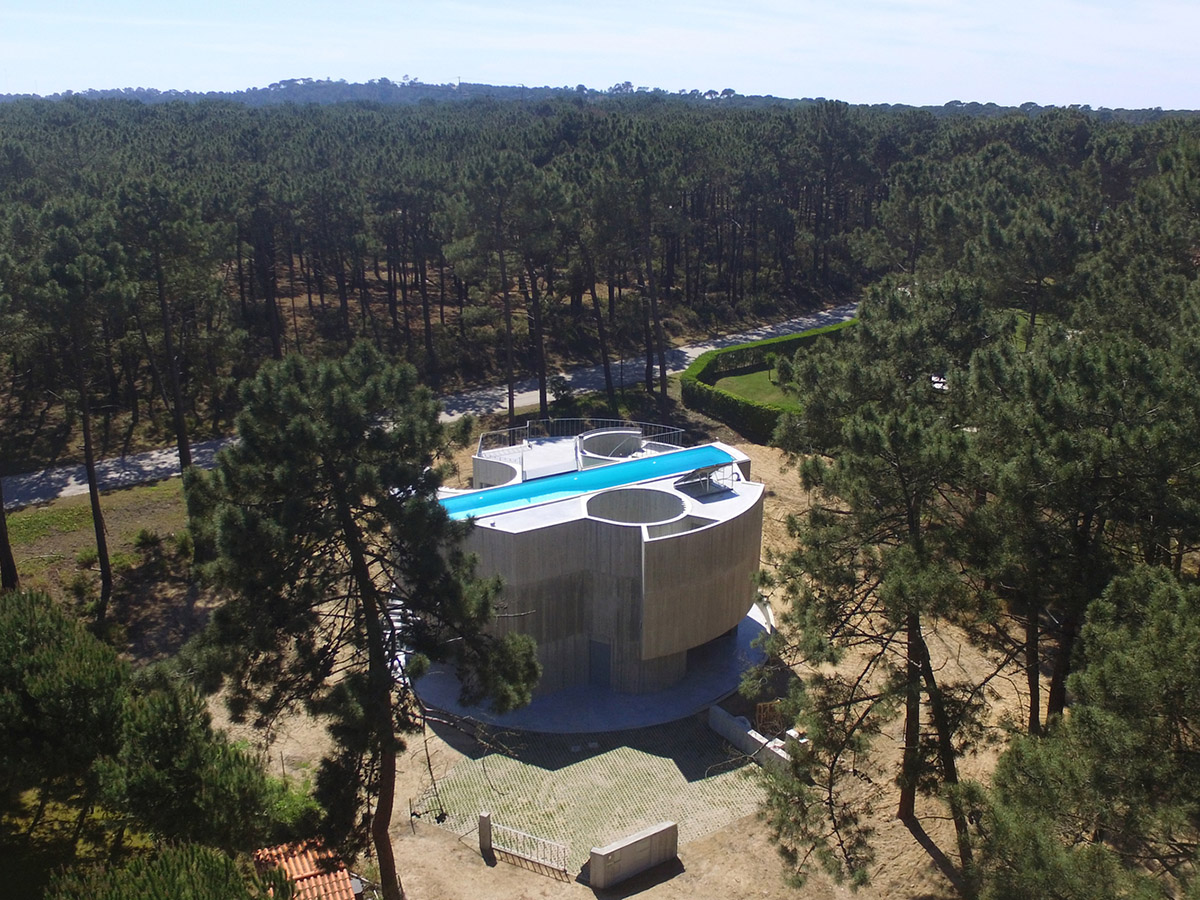 Double(o) Studio has built a private house that comprises circular and hexagonal units merged in one massing as a whole located south of Lisbon, Portugal.

The house, named Casa Trevo or Trefoil House, the building is a two-storey residence in Aroeira, Portugal - which has an indented appearance in a a forest of pine trees, rising tall above a sandy terrain. The site’s close proximity to the Atlantic Ocean provides pleasant breezes and plenty of sunshine, across all seasons.

The architects drew a special approach on the project and tried to create, internally and externally, a range of dynamic and varied experiences of space with dynamic form. 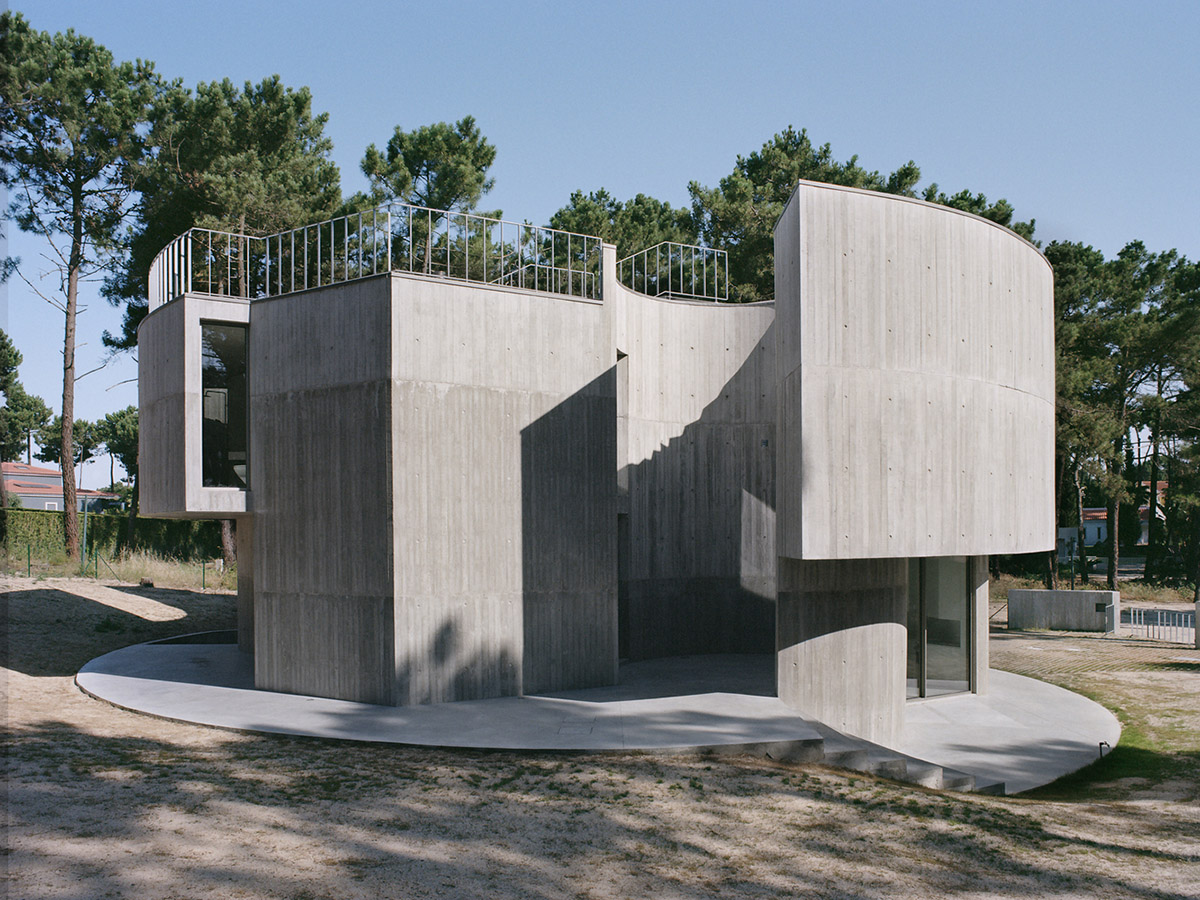 In the interior, the rooms are organized around three outdoor patios, circular in shape. They function as extensions of the interior spaces as well as being light wells and large openings for the living quarters below and sleeping rooms above.

The nine-meter high patios also perform as main structural voids in the form of three hollowed and semi-open columns. Together, they support a series of floor slabs ascending at different increments. They also hold a beam of water, serving as a lap pool on the rooftop and whose underbelly is pressing down on the spaces below. 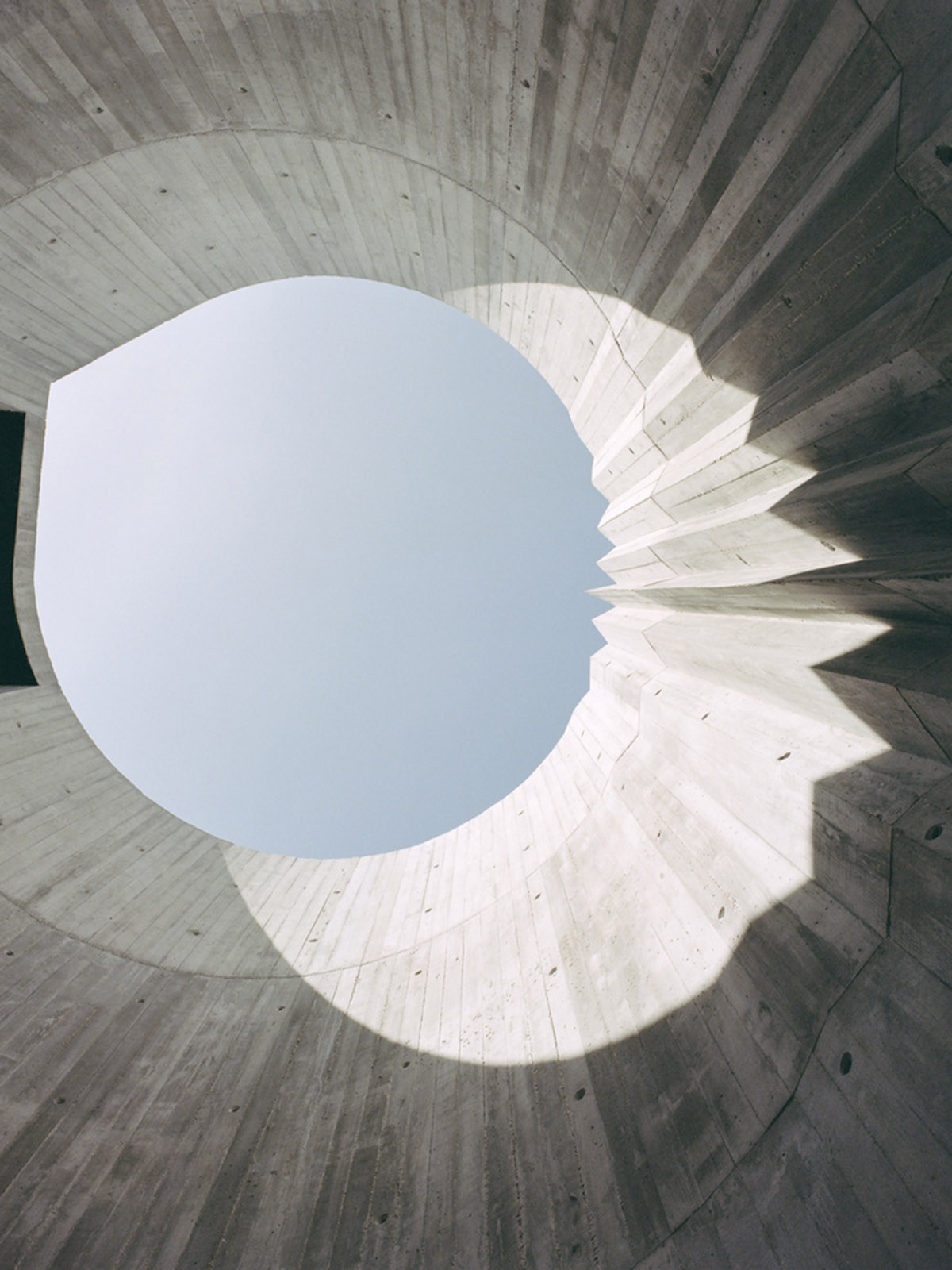 The structure is made of cast-in-place concrete and plays off the ambiguity of mass and void and of inside and outside. It addresses the site by stepping the ground plane along its natural slope and by bringing that level difference inside. It is anchored into the ground firmly but irregularly around its perimeter vis-à-vis the terrain. 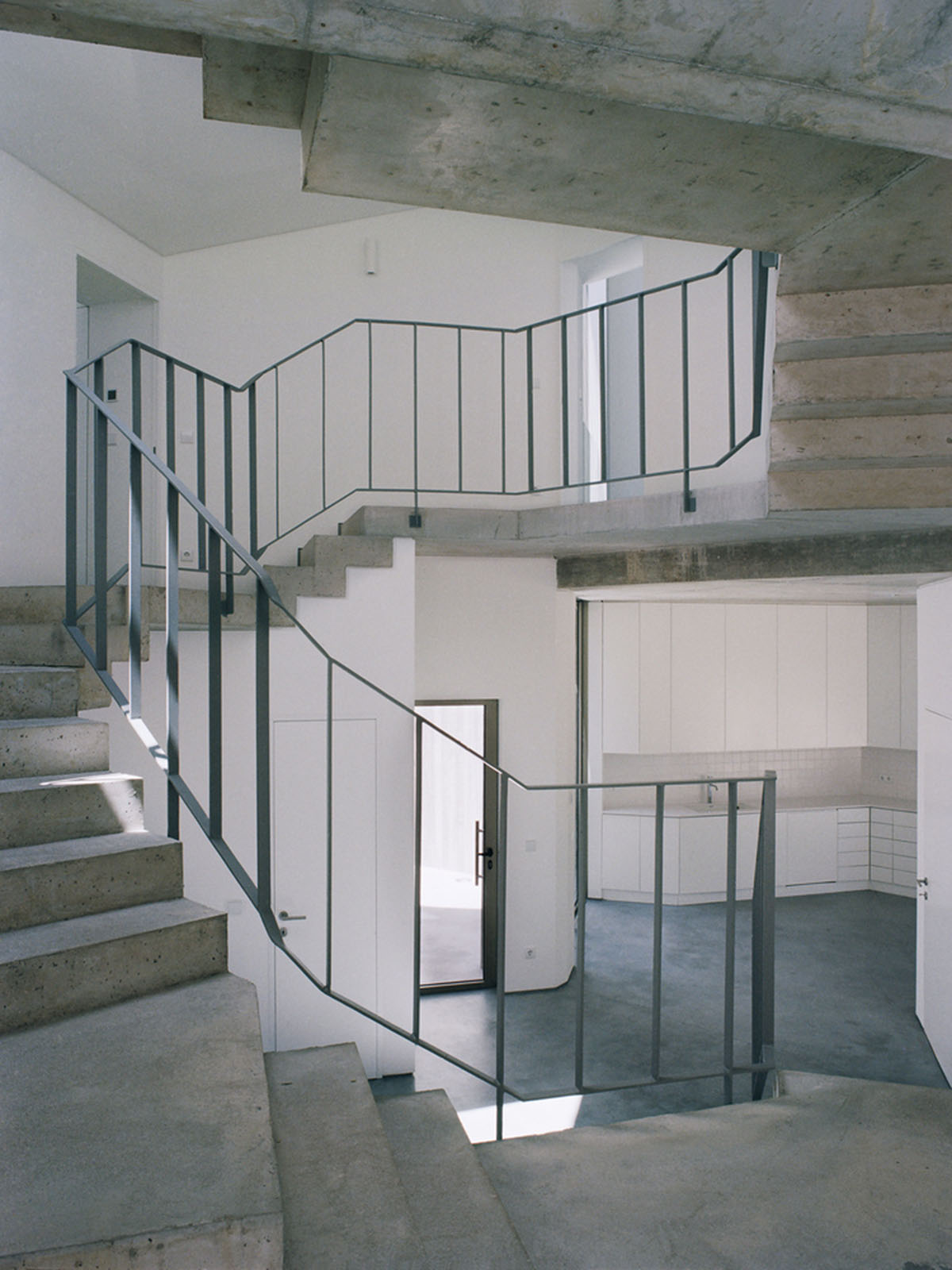 Casa Trevo exerts a peculiar sense of autonomy and monumentality, despite its small size. It is unified by concrete on the outside, subverting the perception of its scale, while serving as canvas for a dialogue between nature and architecture to be projected.

It also exudes a solid impression of mass while revealing little of its inside. The house produces its own introverted world facing the sun, with private yet mutable spaces rendered intermittently by Lisbon’s brash light. The studio developed nine design principles throughout the project, which are decried with the architects' words:

Contrasting Scales (on scaling up and down)

In order to produce scalar shifts in the spatial disposition of the house, elements of different sizes are introduced to its massing. Some are more vertically pronounced, while others horizontally arranged to form an integrated concrete monolith of multiple notations of scales. Moments of tensions and compressions emerge as a result, creating, internally and externally, a range of dynamic and varied experiences of space. 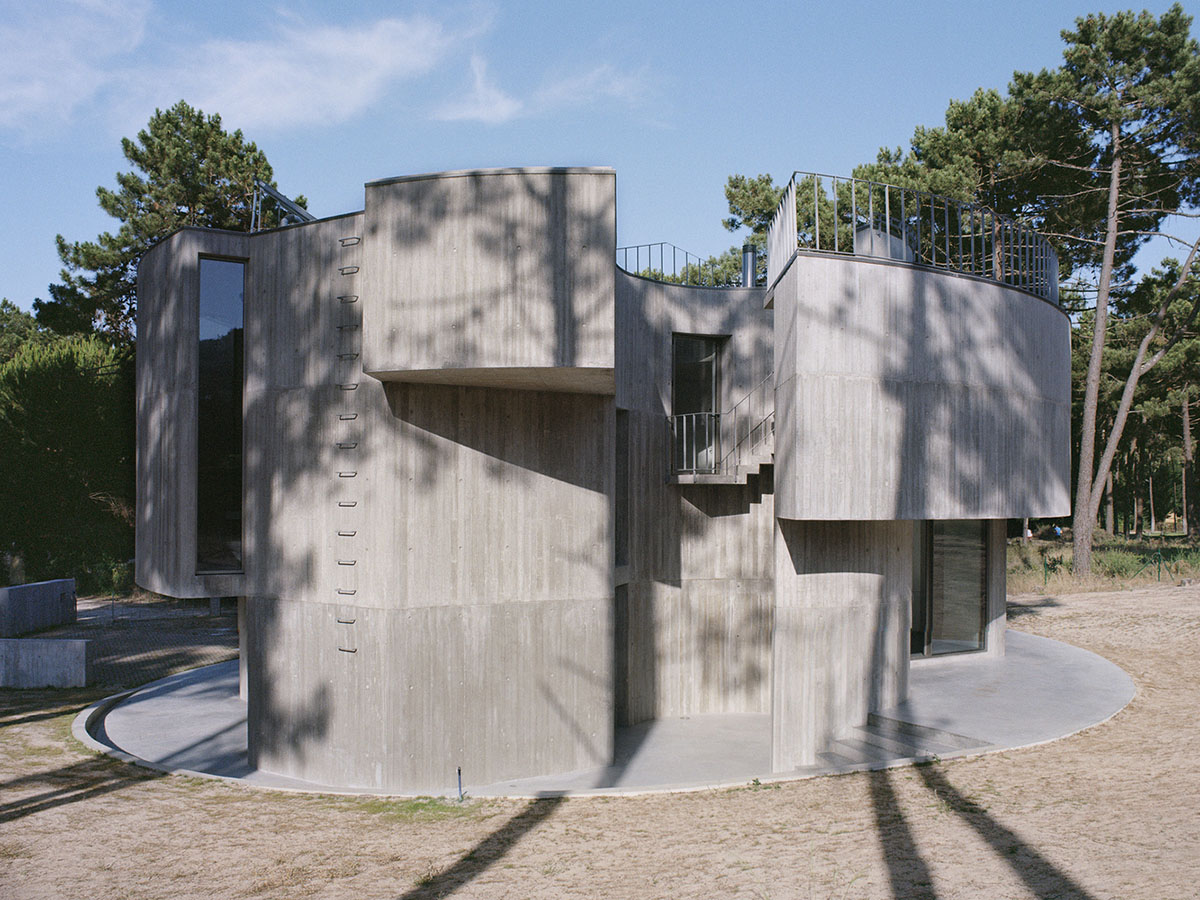 One of the design intents was to raise ground as roof and insert the space of the house under it, while keeping the terrain as untouched and natural as possible. By elevating the ground plane to the roof datum, a latent space is left open beneath for an exploration in section to take place. A duality between literal and conceptual ground establishes a first hierarchy between horizontality and verticality.

The structural imperative caused by lifting the ground towards the sky prompts an ensuing architectural idea for the house; the potential for an added experience of space provided by the inhabitation of its main structure, material and resulting forces. To this effect, three sizeable primal elements are introduced to support a newly defined roof-scape. This tripartite arrangement asserts the vertical axis as the major structural element, consequently liberating the slab. 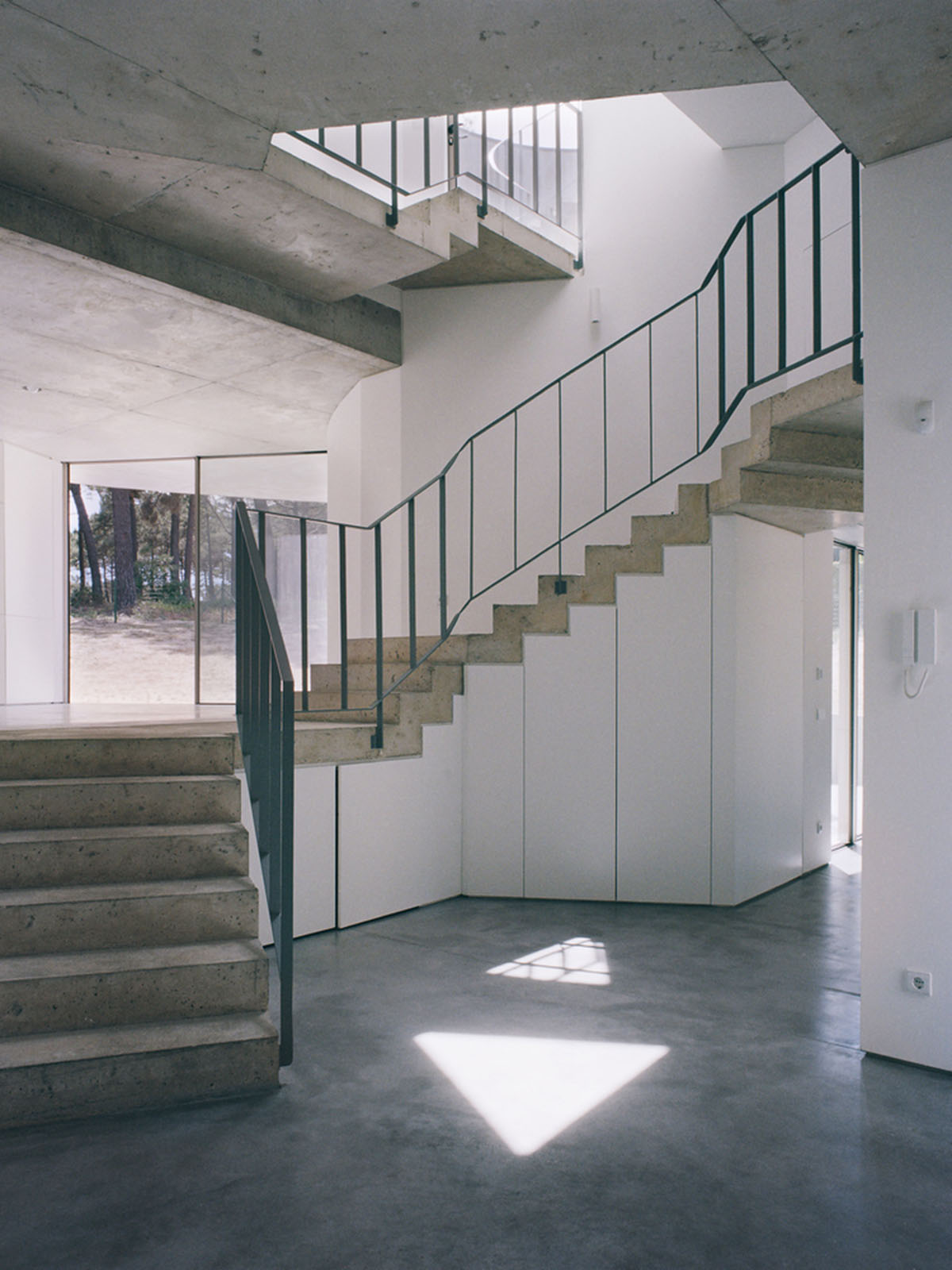 As walls come first, floor slabs are made second and independent from their traditional and rigid building sequence: slab, wall, slab, etc. Disintegrated into bits that are more attuned to their specific room sizes, the dominance of the horizontal datum has at last made way for a variety of volumetric spaces.

The role of geometry in the work is procedural and non-compositional; it is dynamic but not graphic. A relational framework serves as a regulatory plan diagram, a basis from which all parts relate and are integrated into a coherent whole. It is prescribed yet agile in adapting to various design evolutions until a solid formation is reached. 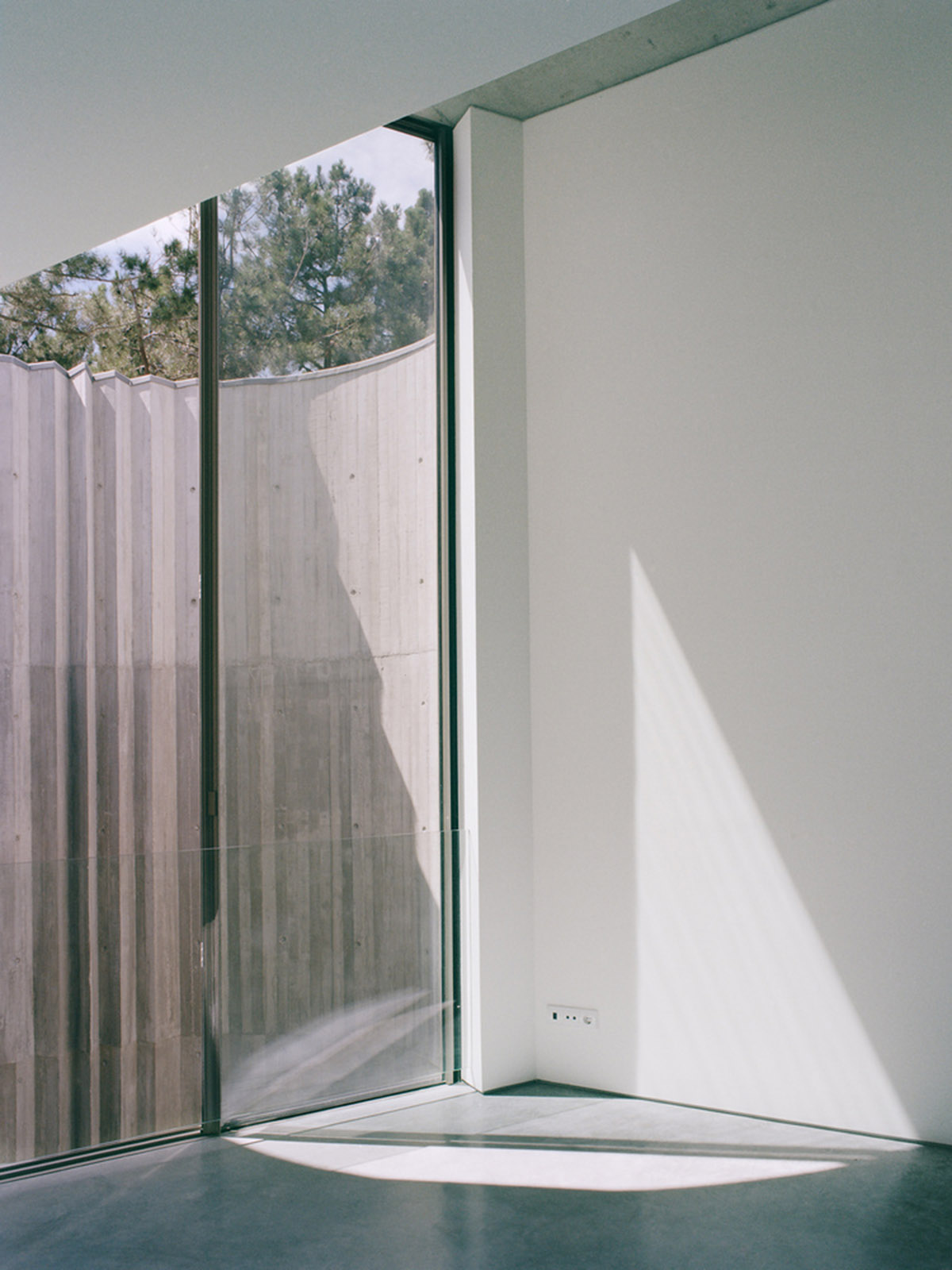 The house doesn’t take any posture towards its site. There are no privileged vistas, no distant horizon and no strict physical boundaries to address; no front, back or side divisions. In place, it negates its context by vertically addressing its immediate environment. The sky is the site’s only vantage point, affirming the rooftop datum as the only façade for the project.

To render the spatial and scalar concepts active in the house, an important design consideration was to retain the reading of the overall built mass.

As little visual interference as possible had to be sustained in order to avoid the breaking down of volumes into disparate planes and surfaces. The detailing strategy adopted was to erase any presence of details or visual breaks which could distract from the perception of a holistic monolith. 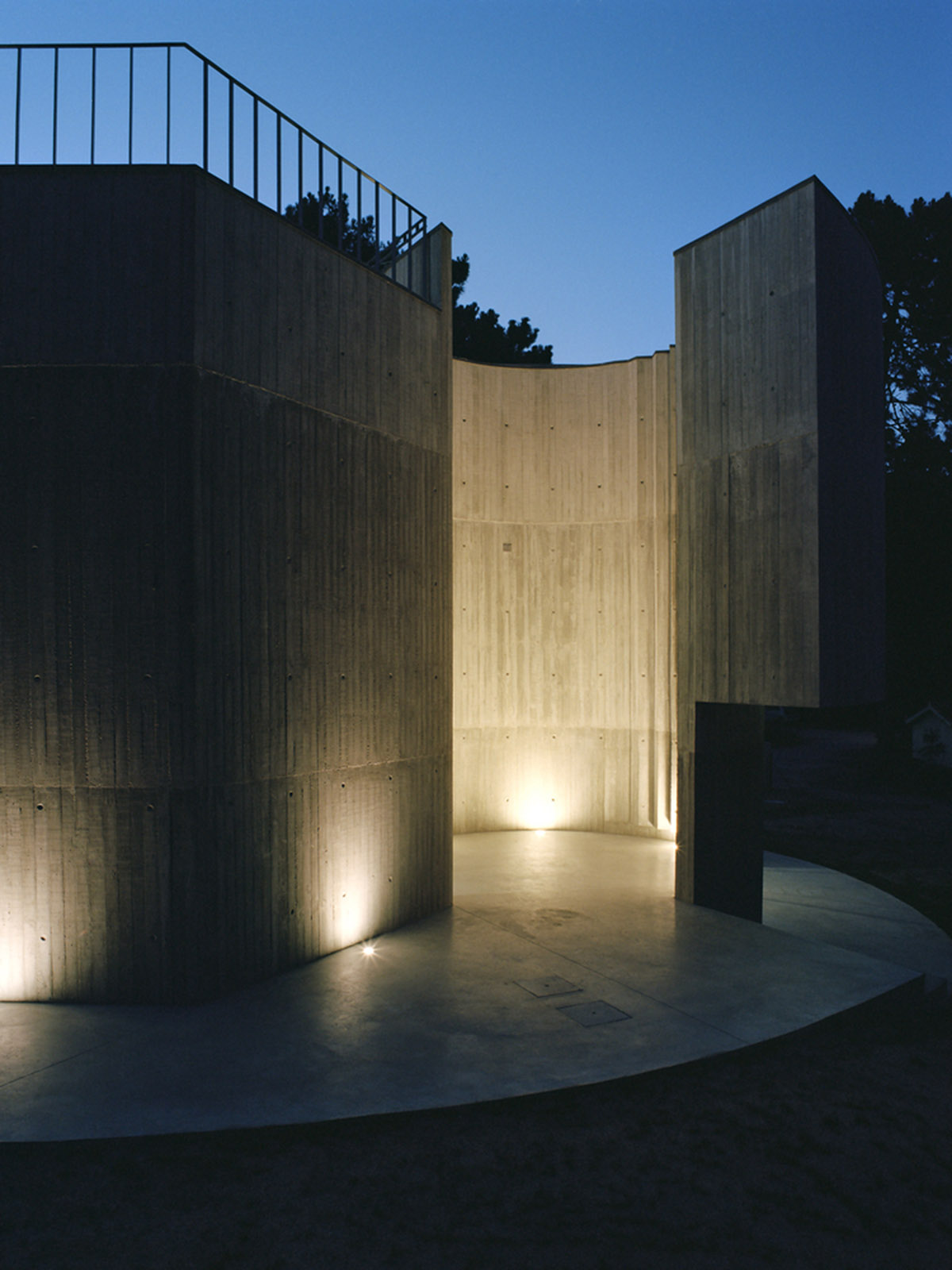 The provision of blank canvases inside the elemental patios makes room for something more intricate to occur at a detail scale.

Progressively folding in and out of the wall thickness of the patios, and calibrated to the specific lighting context, concrete corrugations are made into devices that delay the passage of time through a game of light and shadow. 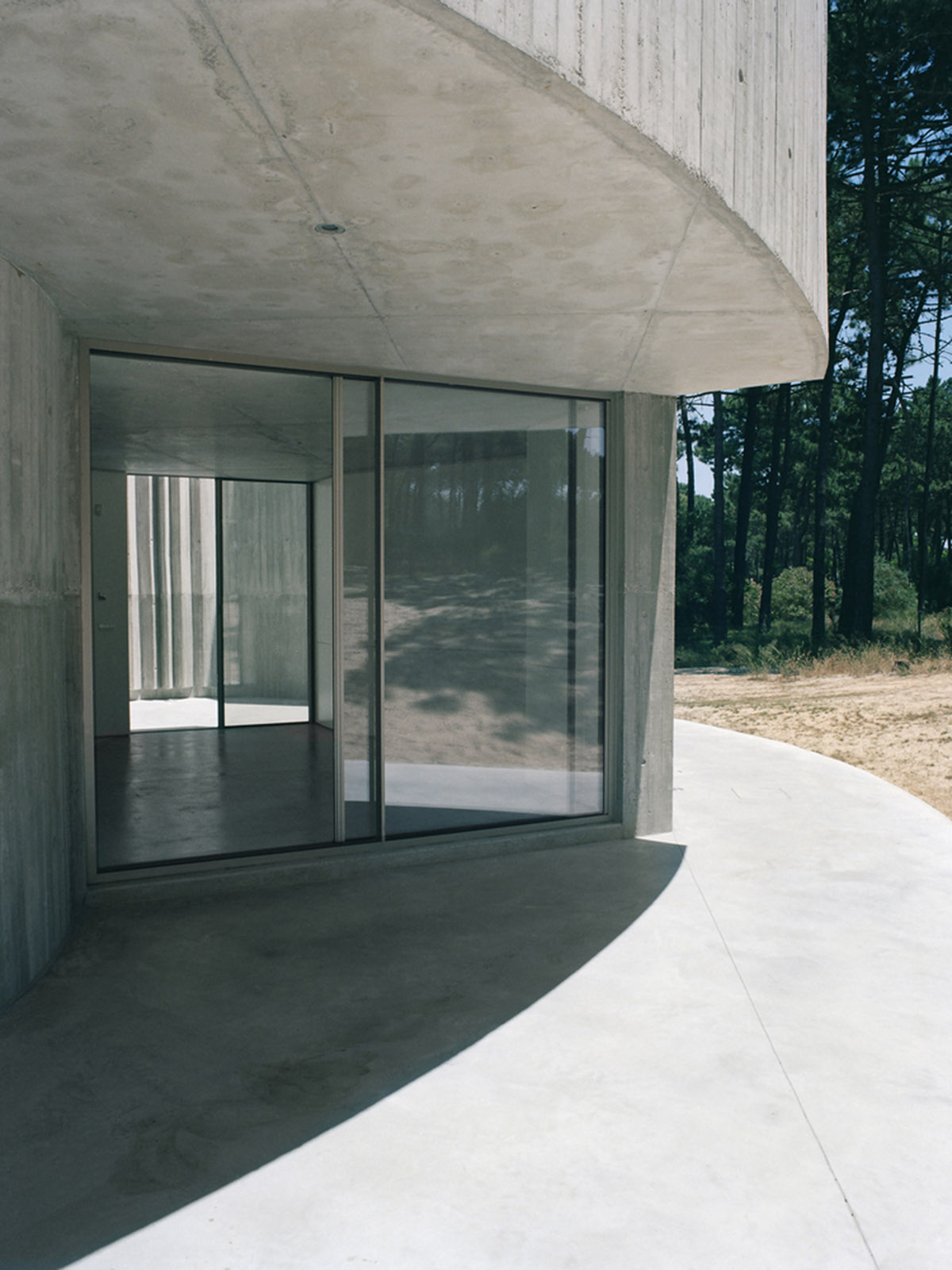 Inside Out (on space: interiority)

A series of photographs and films were commissioned to serve as an independent house study. They search for the first time how pure structure could become absolute space and vice-versa.

Prior to inhabitation, they survey the existential qualities of the house created by the sole participation of natural sunlight with material, structure, mass, scale and space. 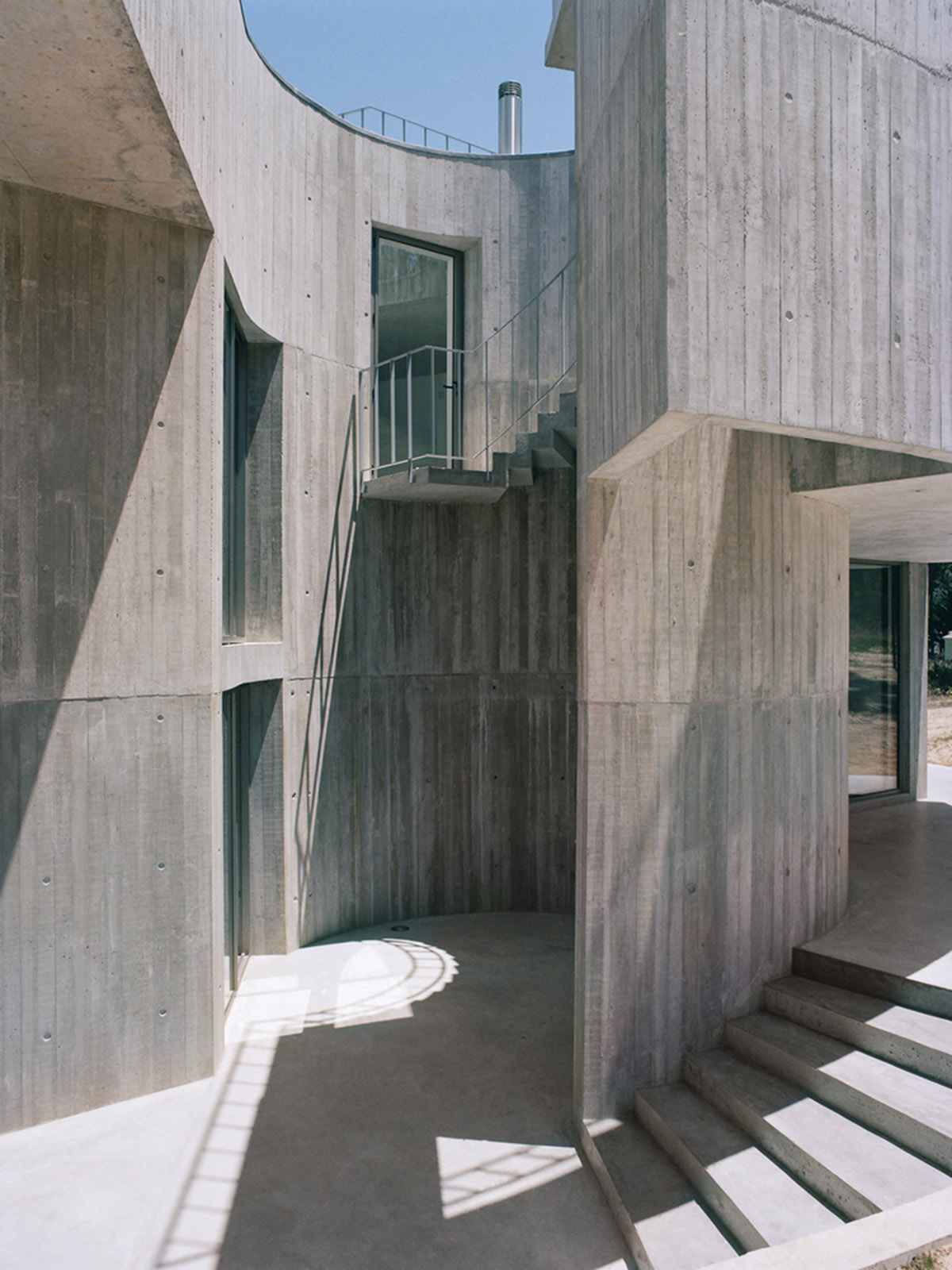 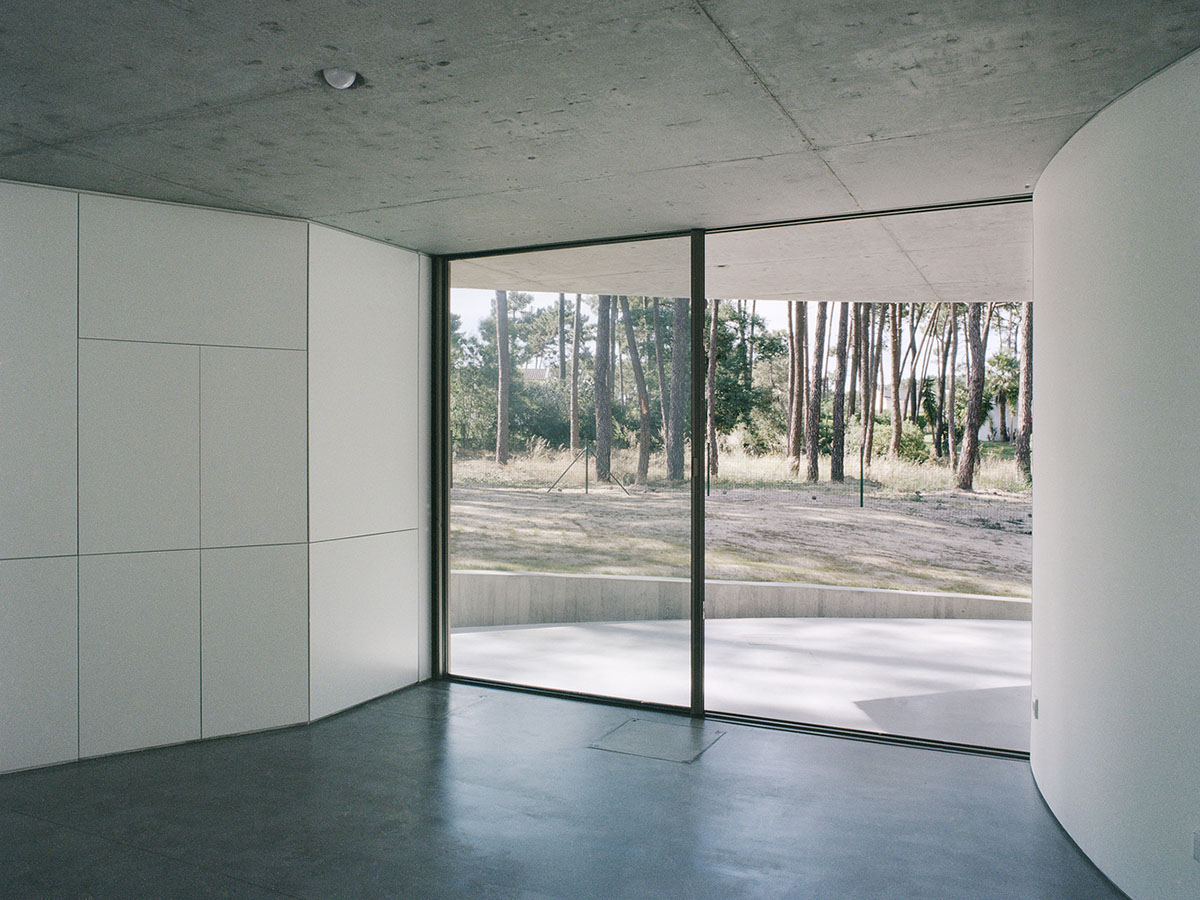 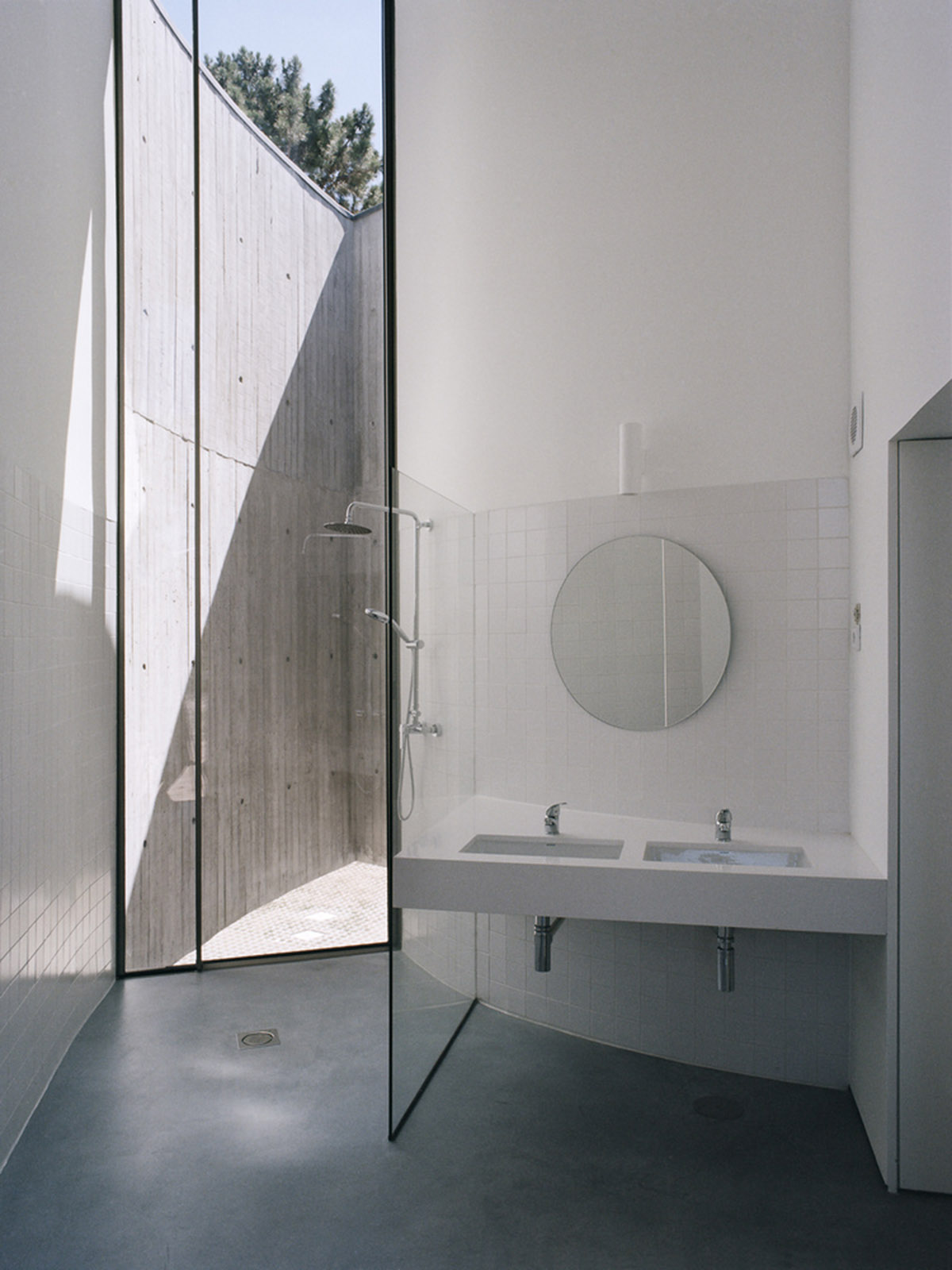 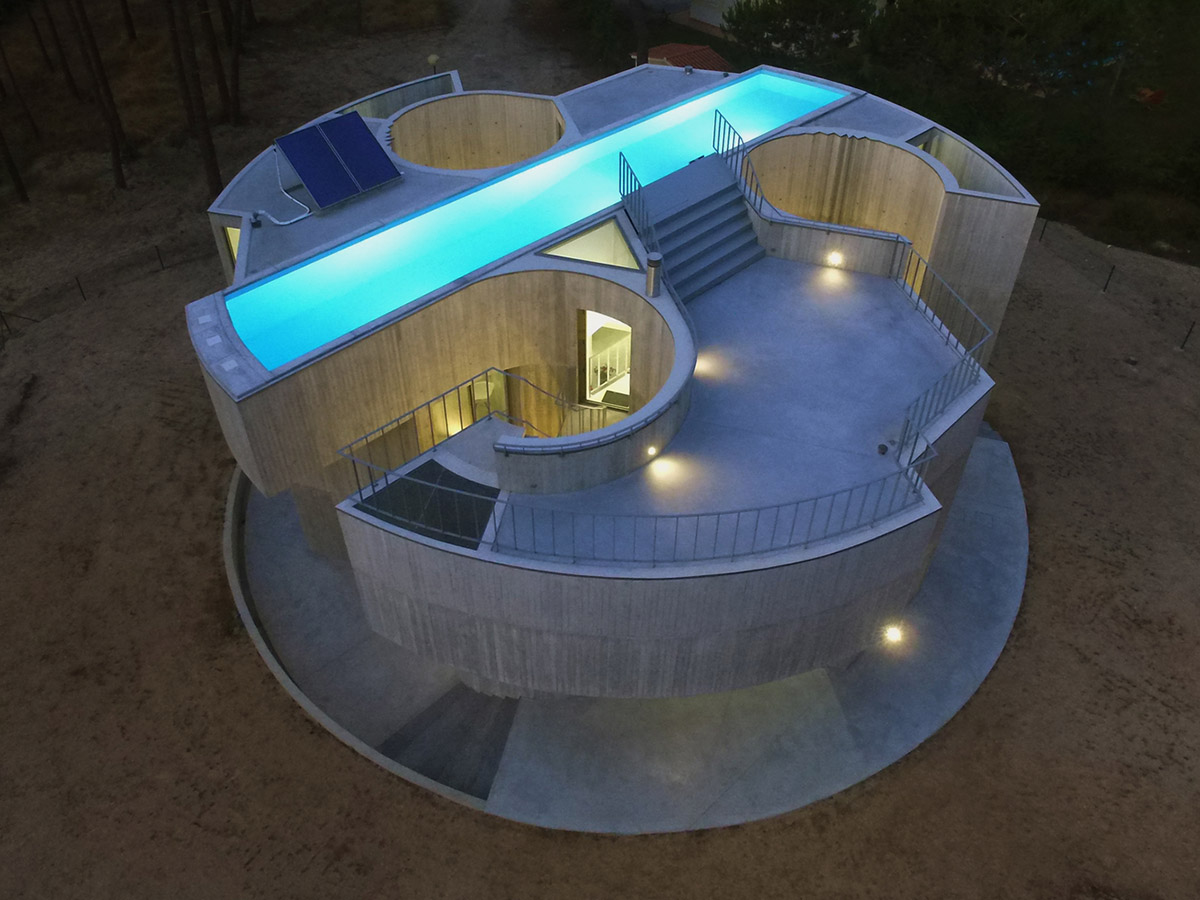 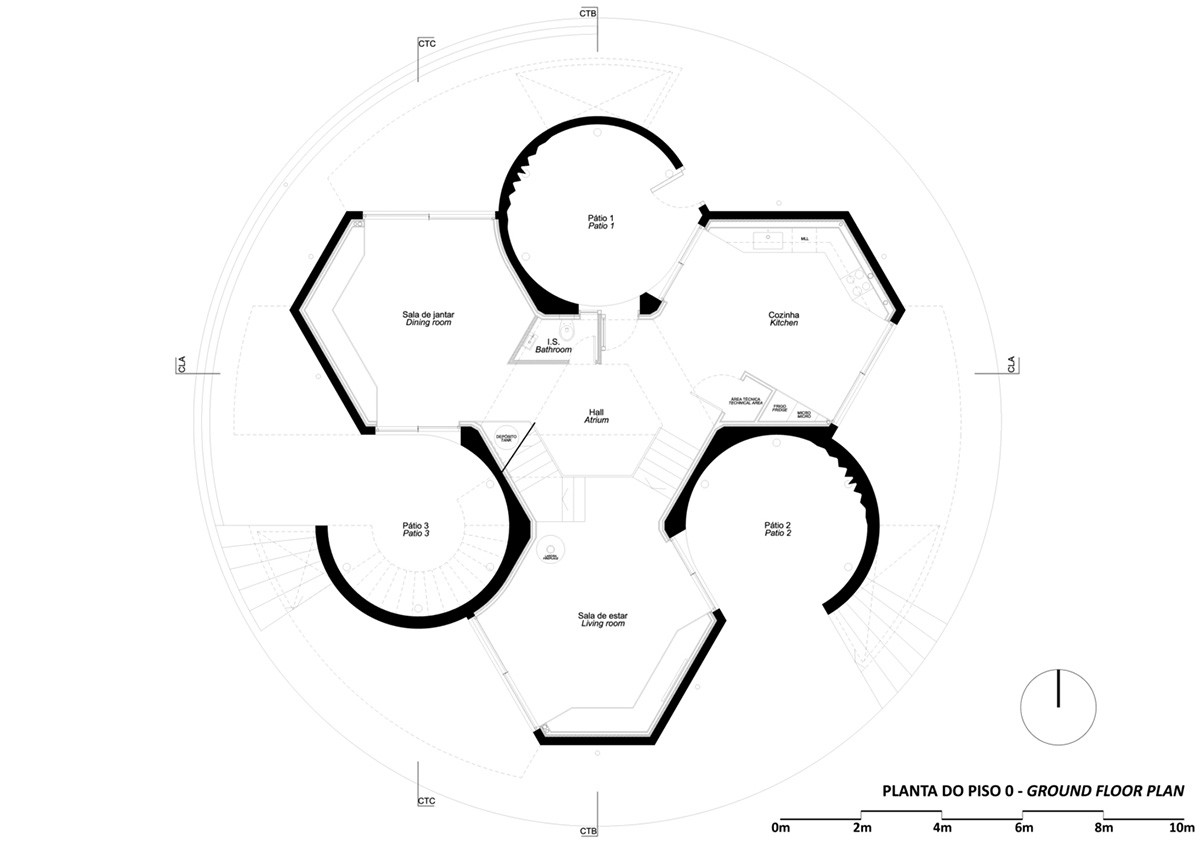 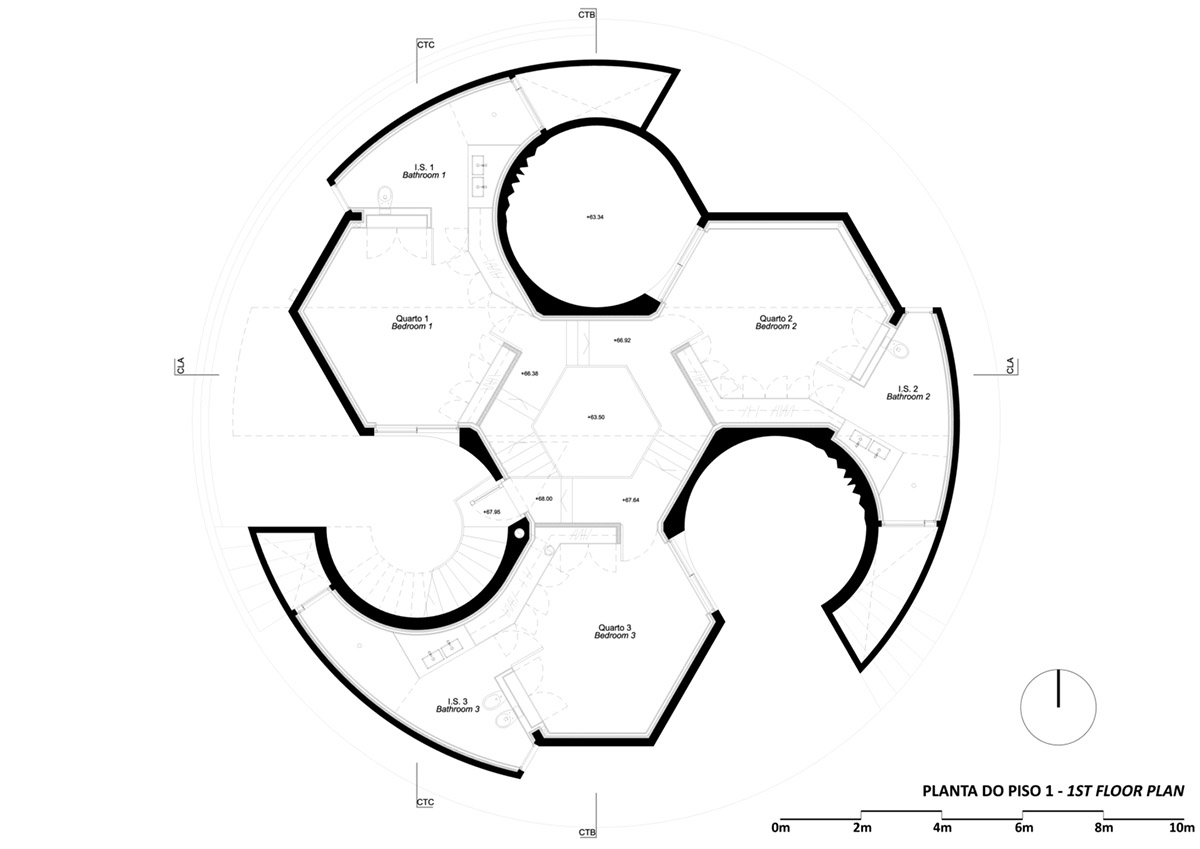 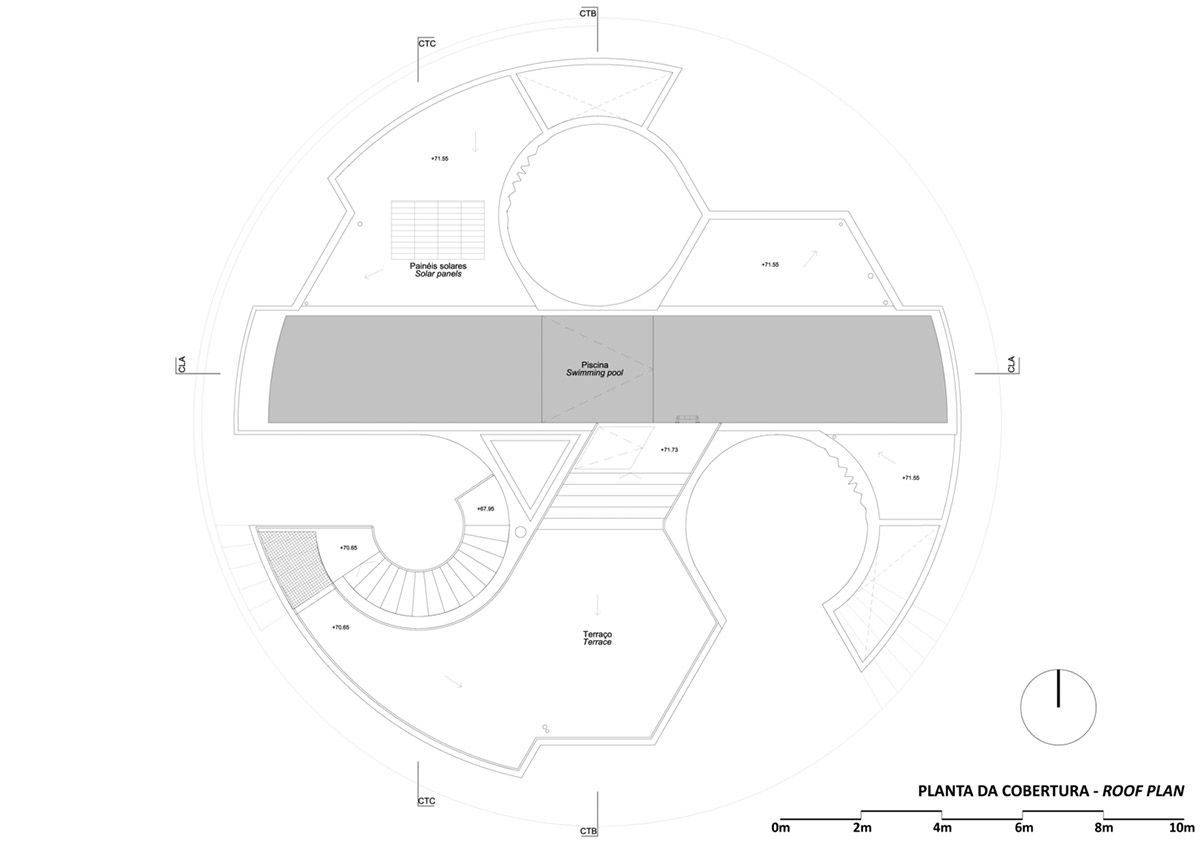 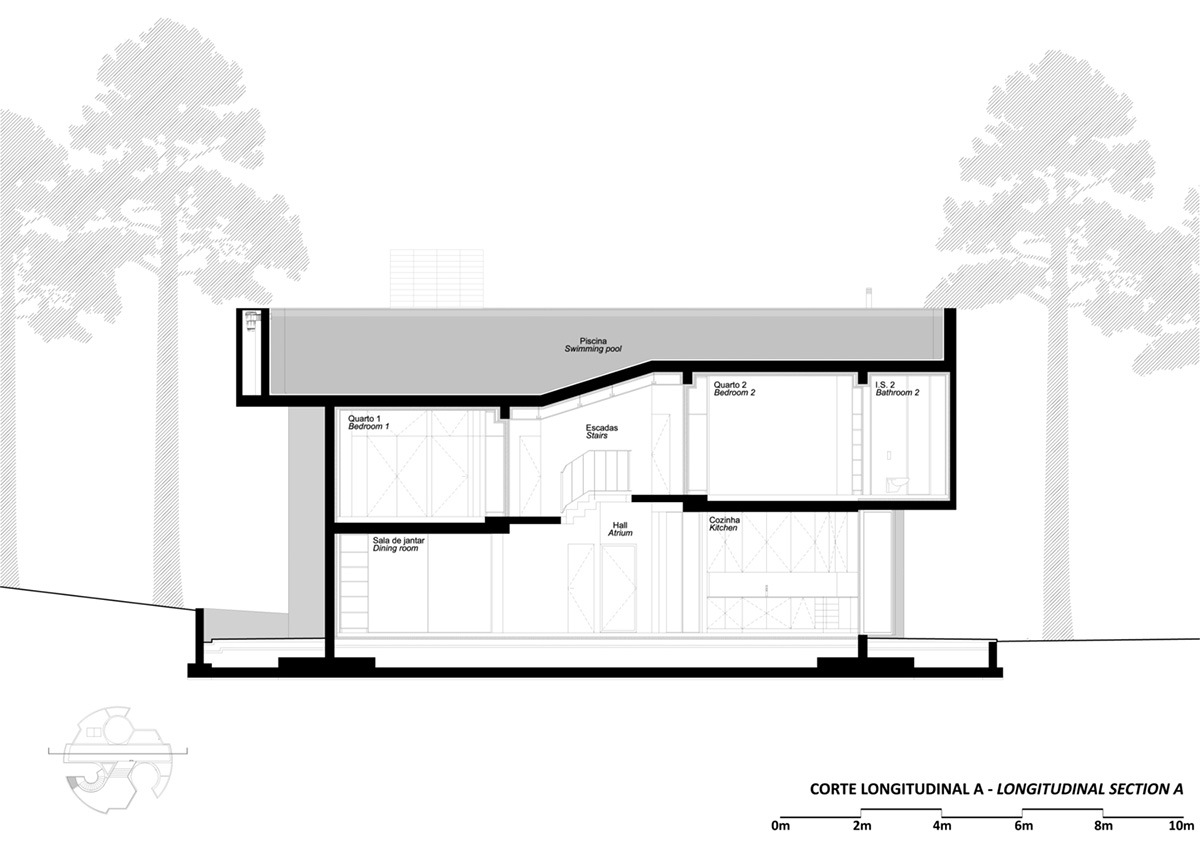 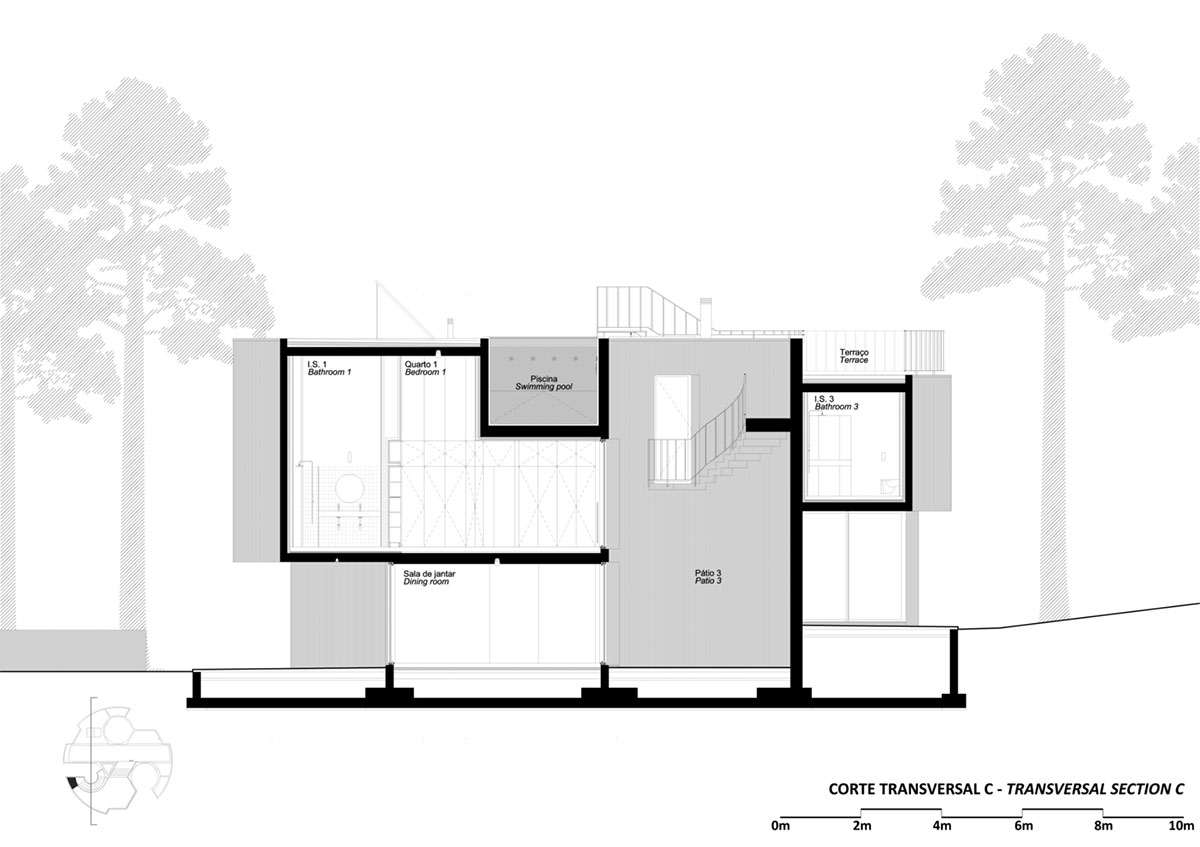 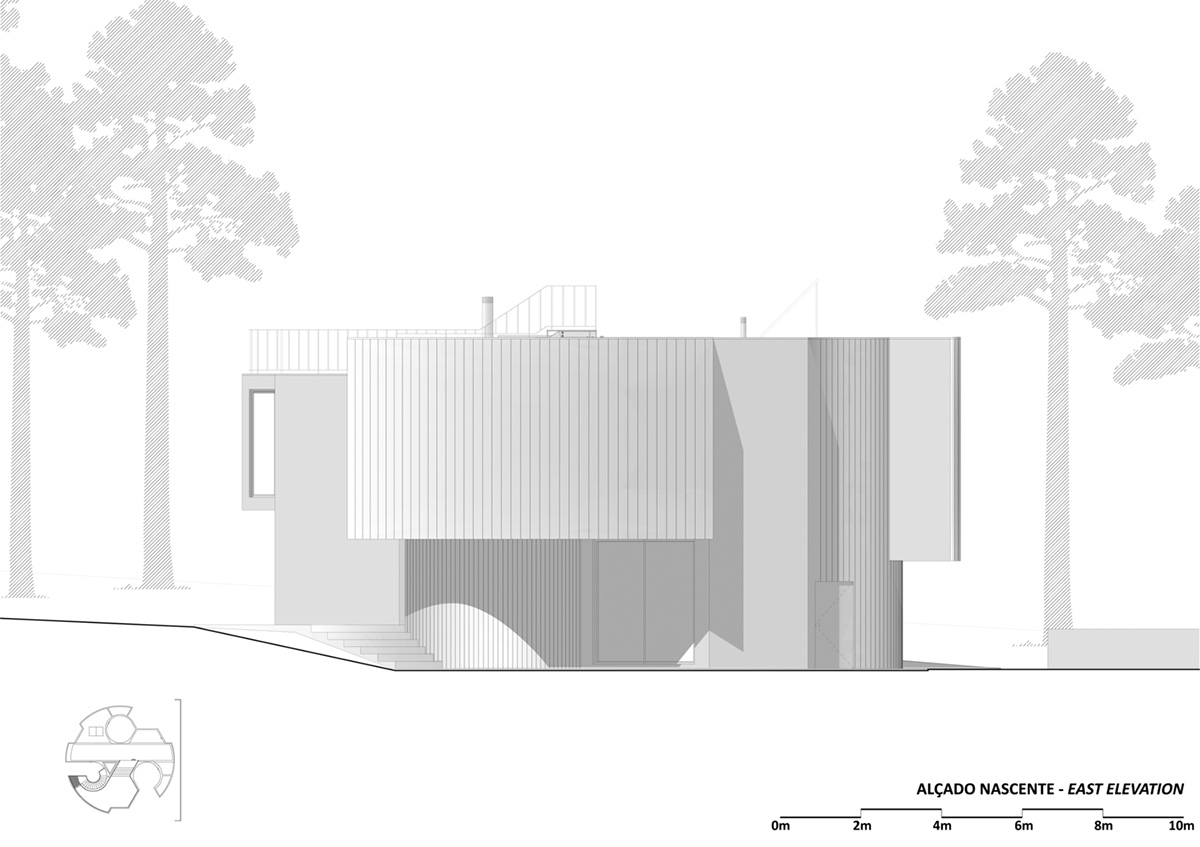 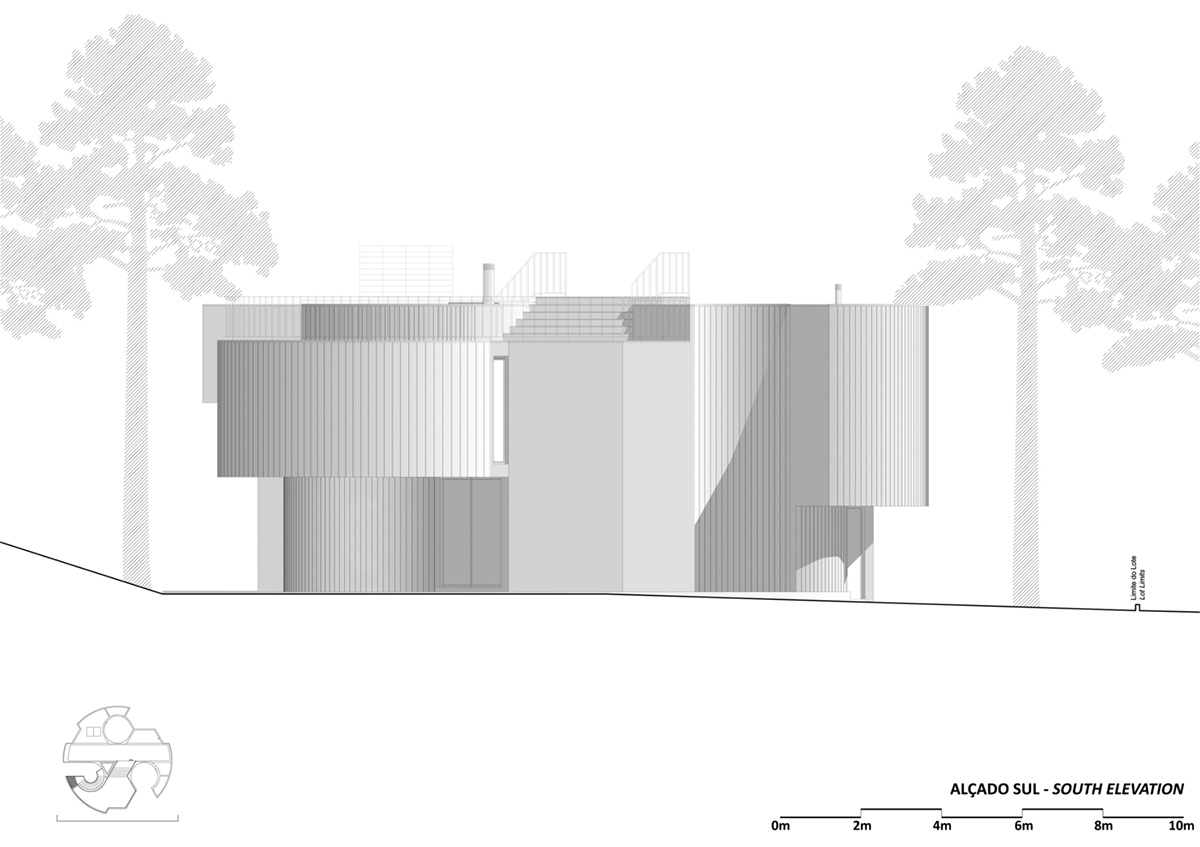 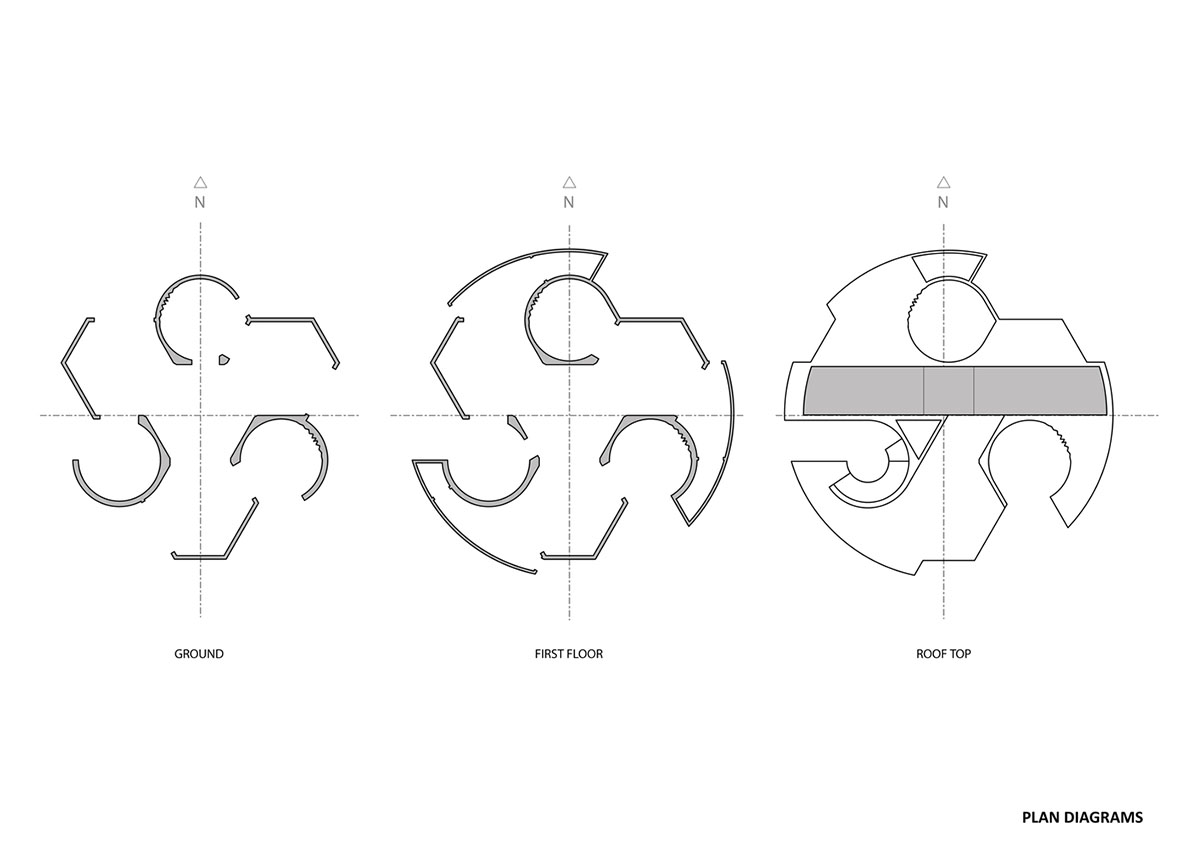 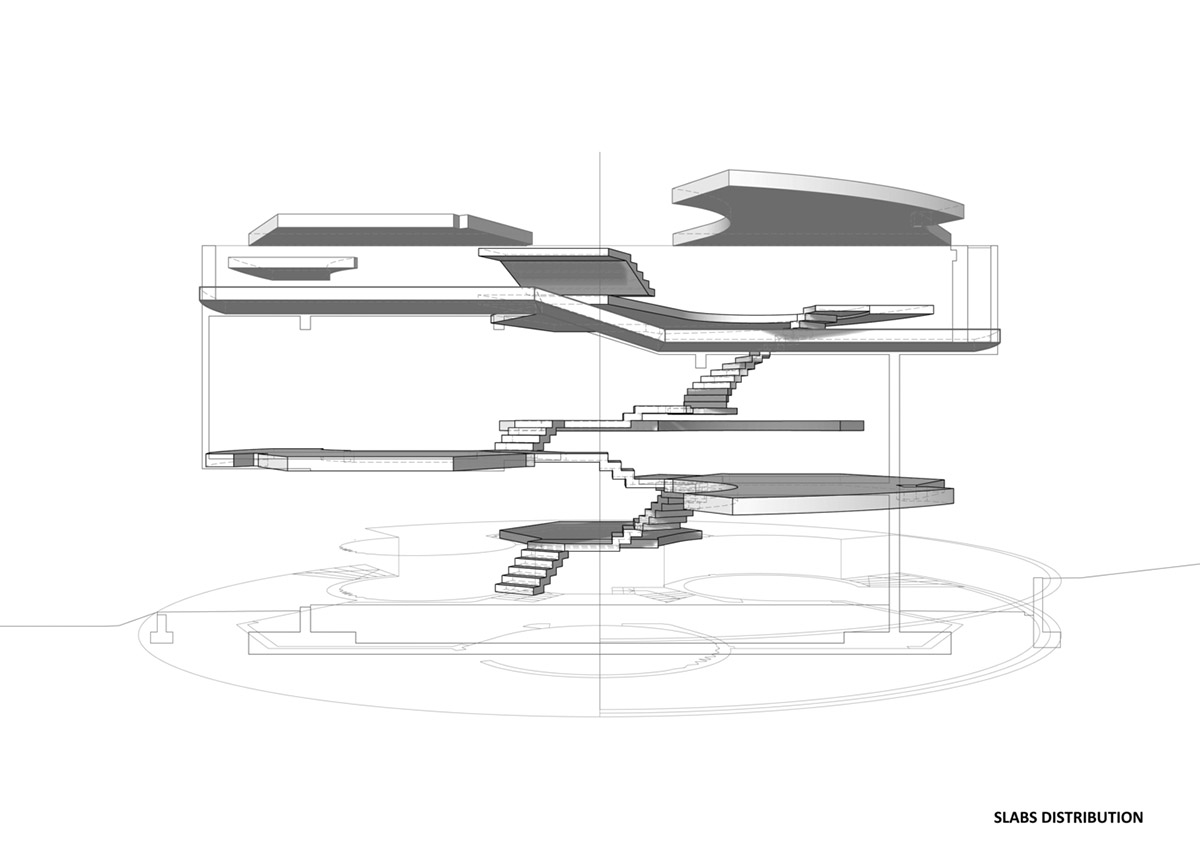 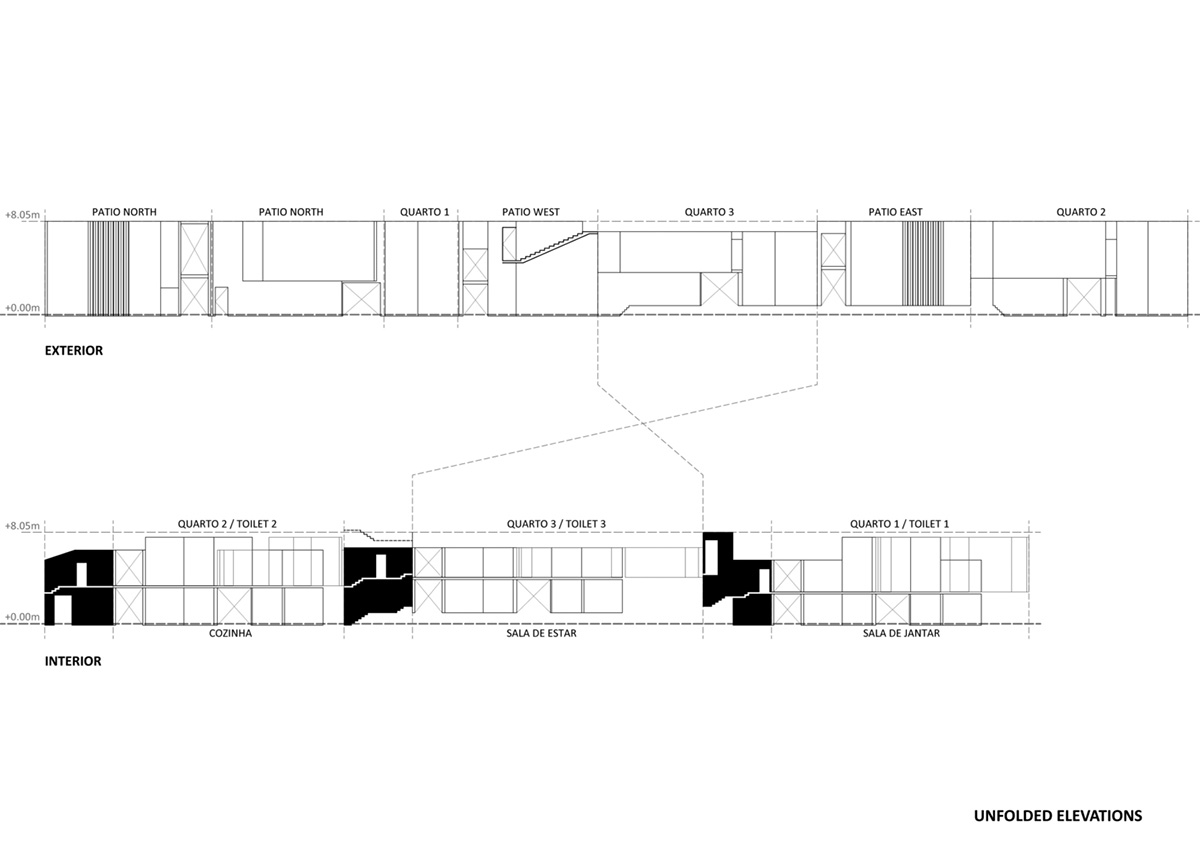 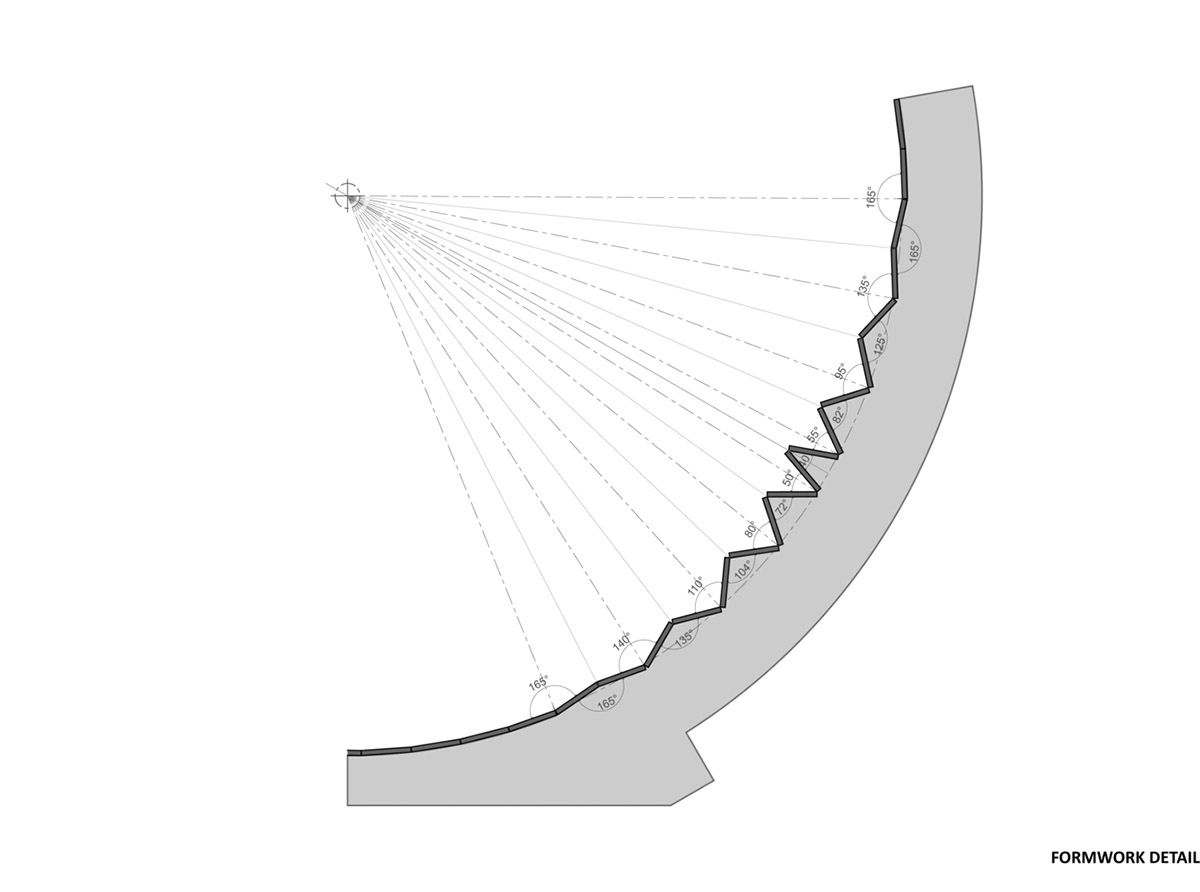 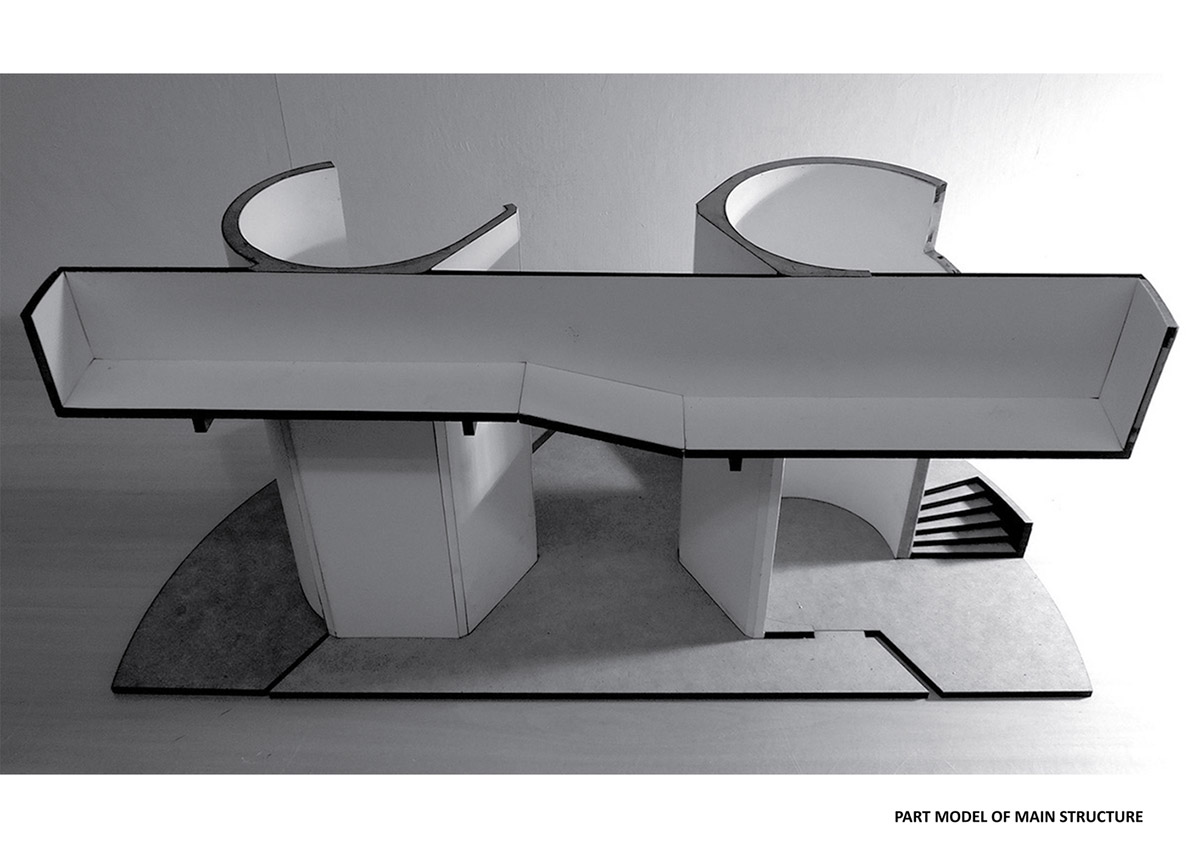