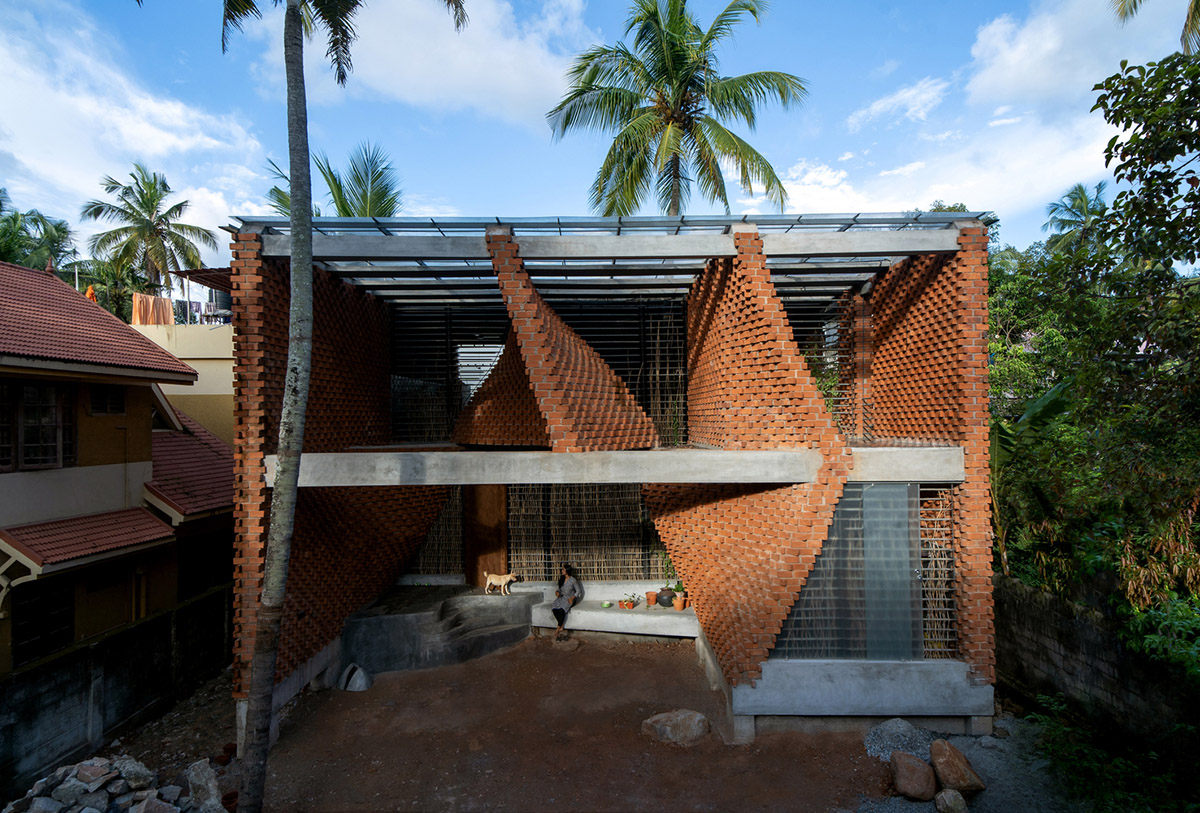 Called Pirouette House, the 196-square-metre residence acts like it's dancing from exterior, especially when it is lighted up, it is a residence that dances at night.

The two-storey residence is located smack in the middle of an urban and crowded locale of Trivandrum, the site was a small plot that was being suffocated by other residential projects from all four sides. 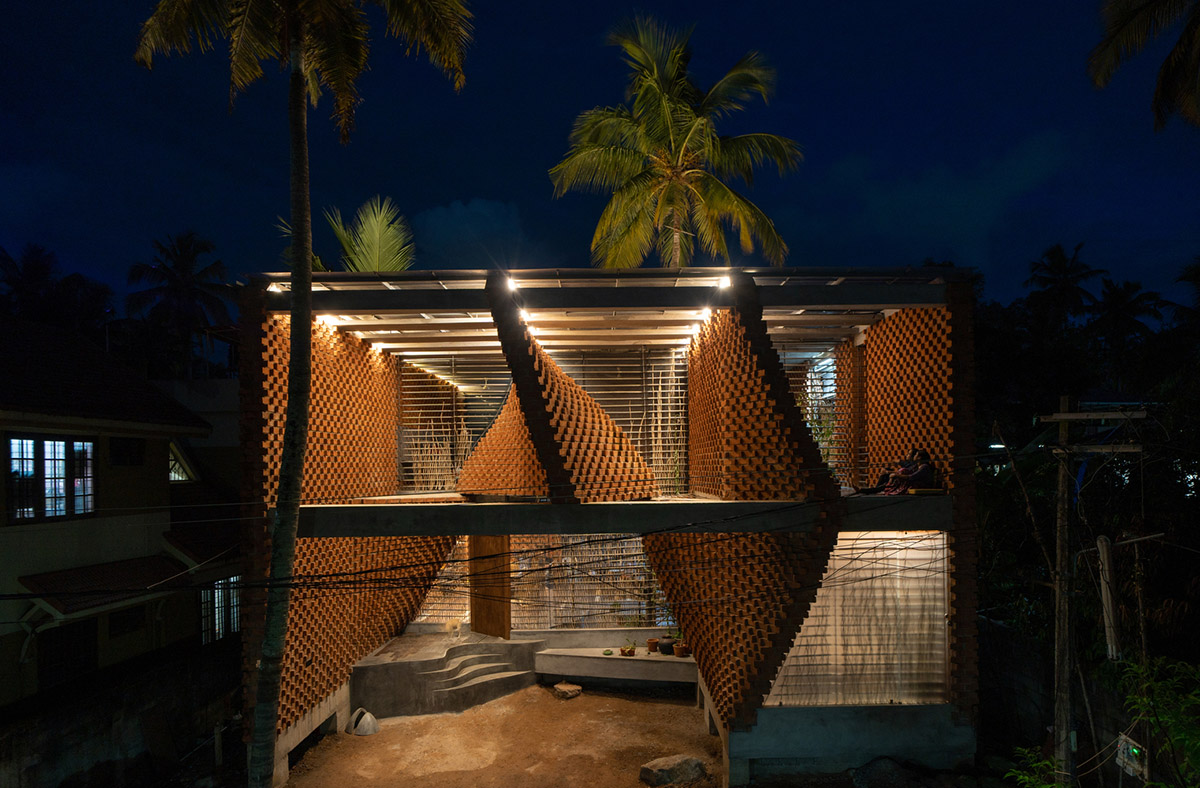 In this technique, bricks are placed in vertical position instead of conventional horizontal position and thus creating a cavity, meaning a hollow space, within the wall that increases thermal efficiency and cuts down the number of bricks. 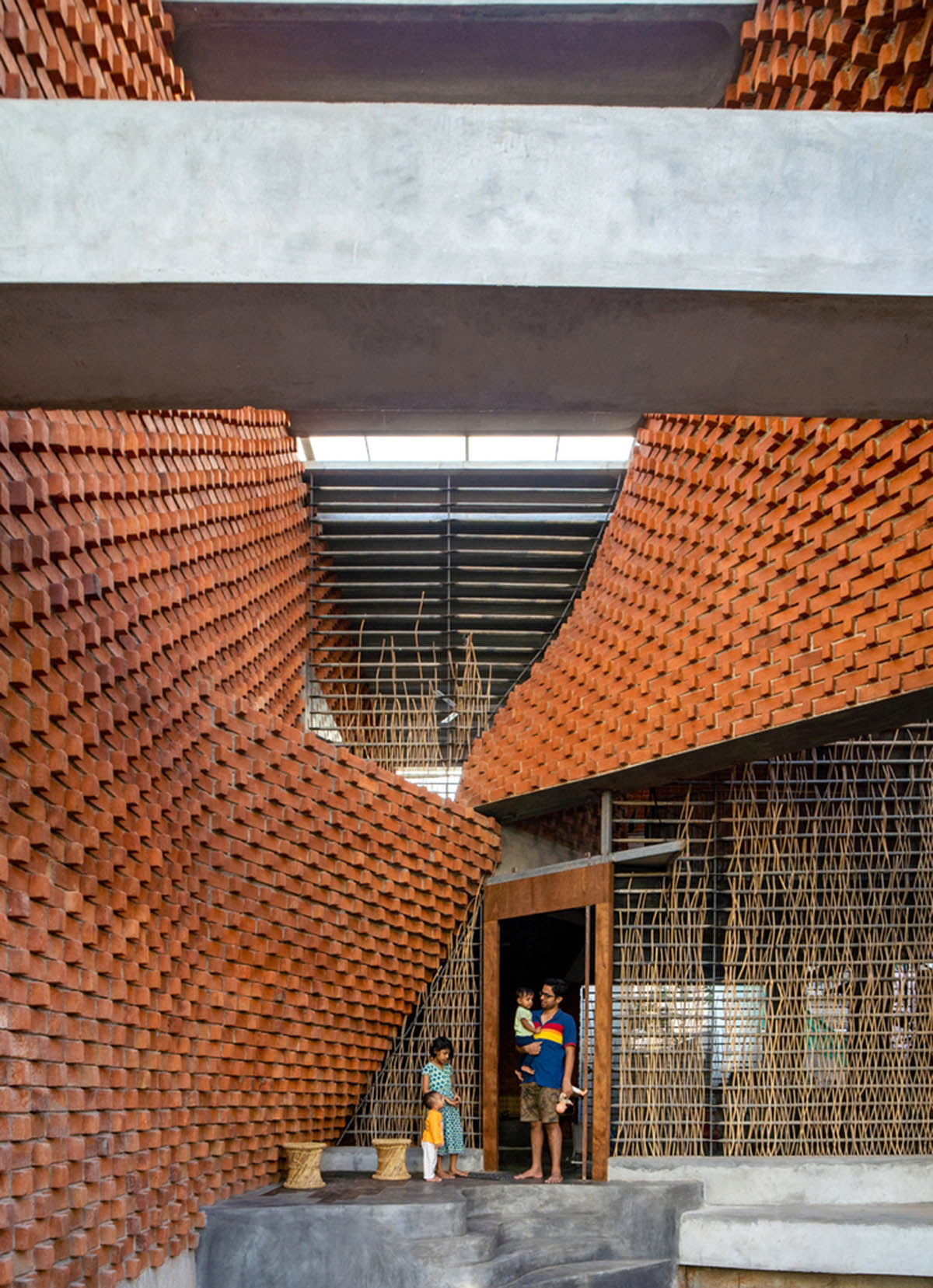 In this residence, the architects also used waste wood, they cut wooden scrap pieces that have been joined to panel a part of the flooring.

"The idea of this residence was to have an inward facing house with all its spaces opening into a funneling central courtyard. The house is aligned in the East-West direction with openings facilitating for maximum cross-ventilation," said Wallmakers. 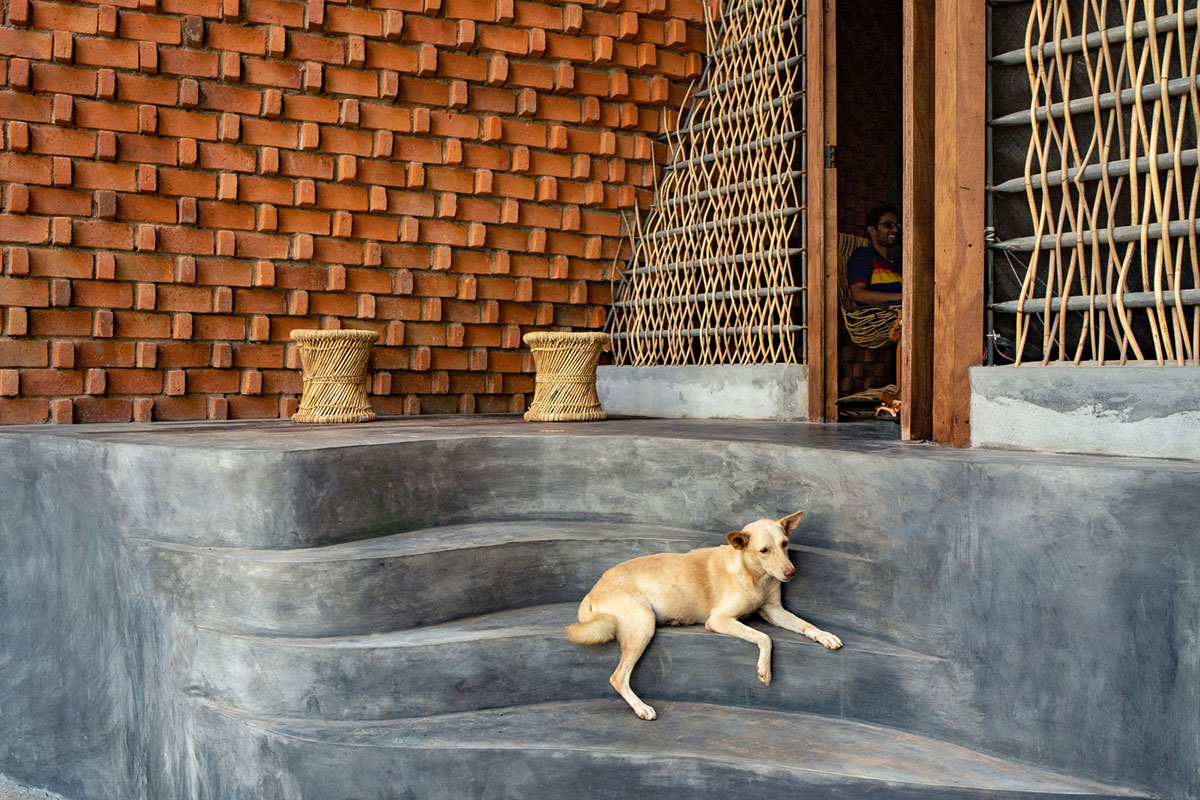 "In the context of the city of Trivandrum that stands as a testimonial to many of Ar.Laurie Baker’s masterpieces, it seemed fit to modify one of his own introductions, the Rat trap bond masonry technique in this site which didn’t offer the opportunity for soil excavation or for making mud blocks."

"Keeping in mind that Brick kilns in Trivandrum is a dying industry with people opting out for wire-cut machine made bricks, this was also an attempt to promote this local agriculture based industry that is on the brink of extinction," the studio added. 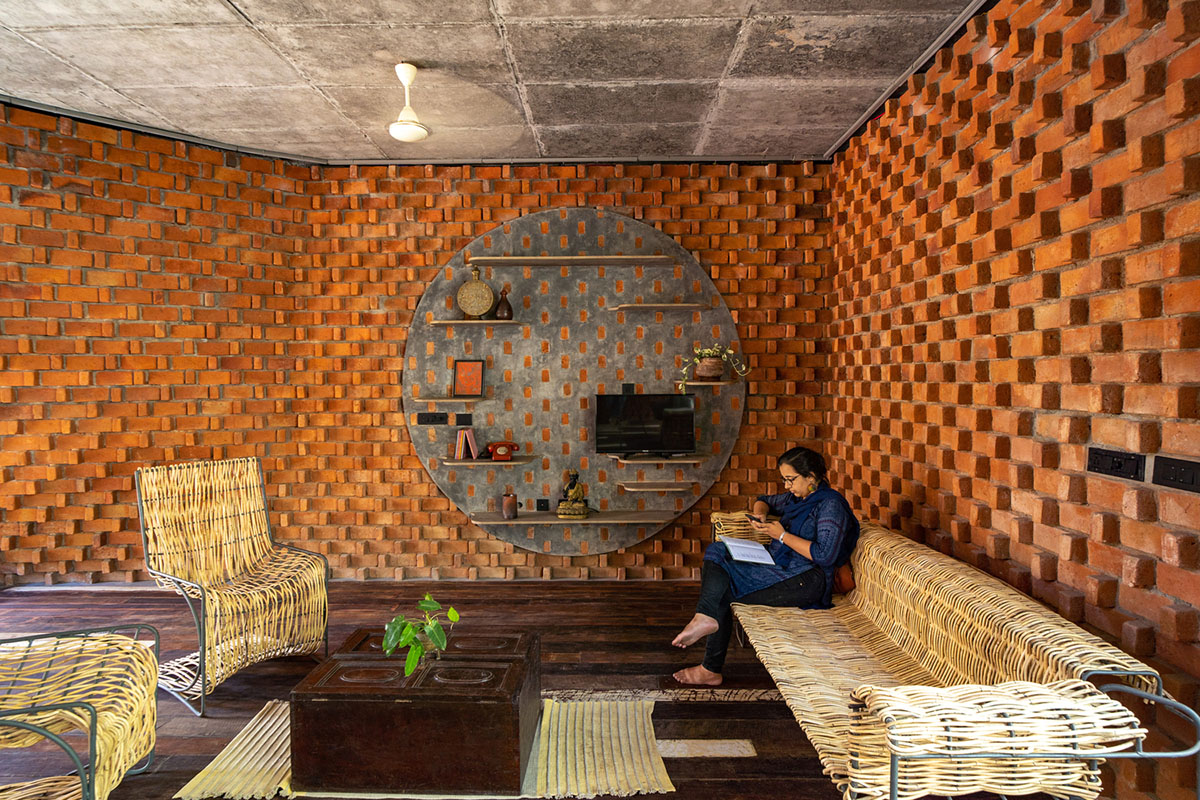 The Rat trap bond is a brick masonry method of wall construction in which bricks are placed in vertical position instead of conventional horizontal position and thus creating a cavity within the wall that increases thermal efficiency, cuts down on the total volume of bricks used and is ideal for concealing structural members and service ducts. 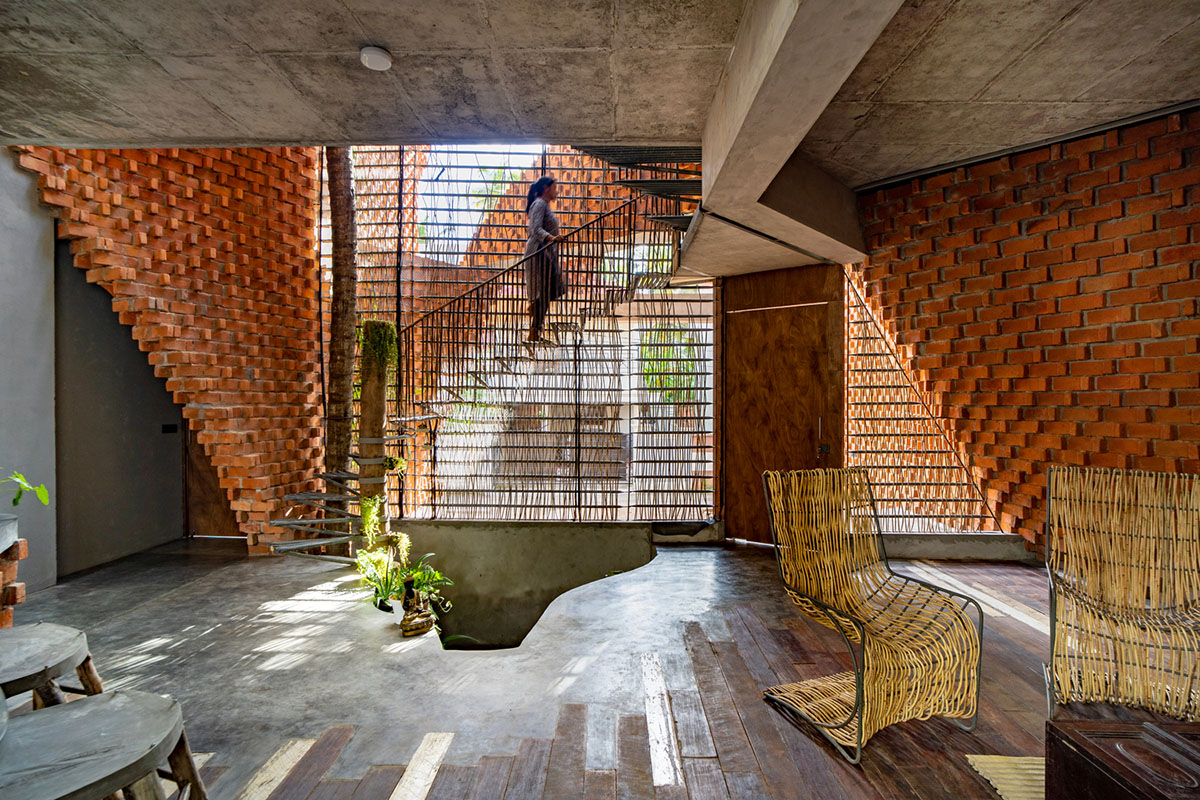 As the studio highlights, the idea "was further developed to form a series of slanting walls that danced left and right, converging only to support the ferrocement shell roof."

Each staggered wall has been tailor-made to suit the issue of deficiency in space that this residence posed, aiming to create larger volumes and a feeling of privacy. 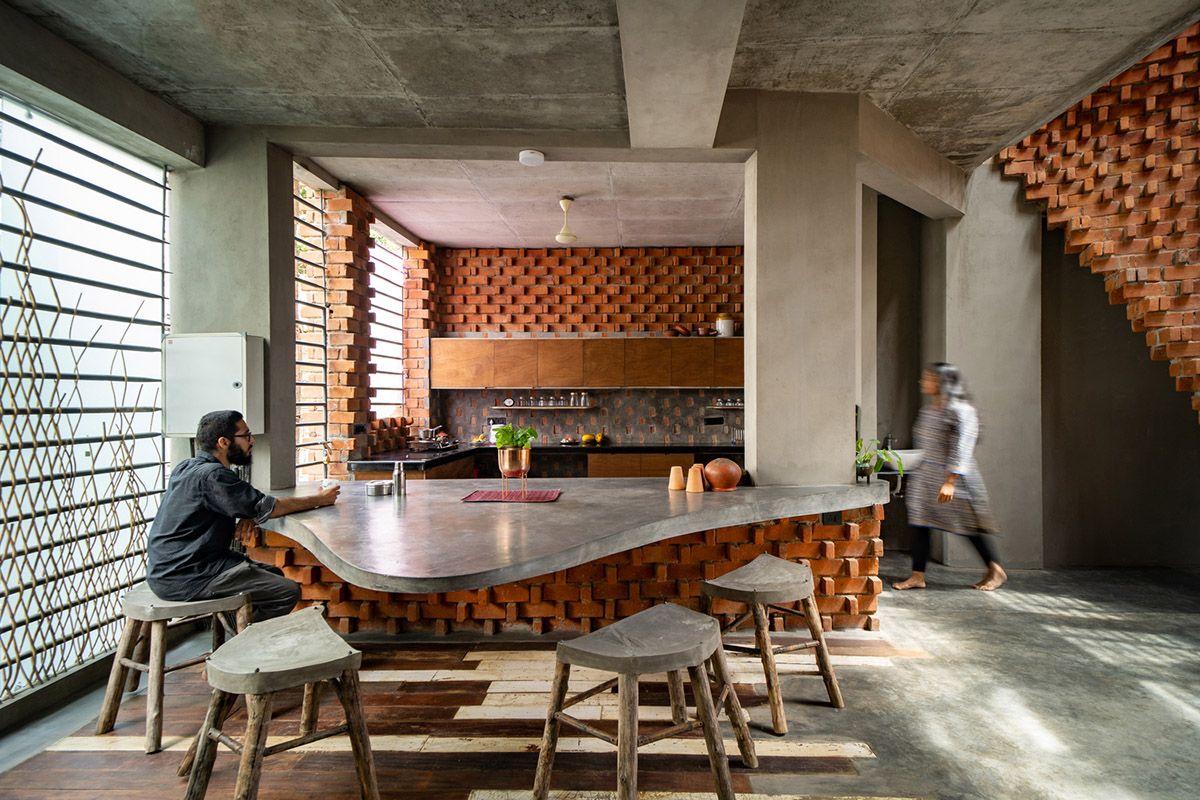 Scaffolding pipes left behind from the construction stage soon were reused to form the central staircase and the grillwork. Keeping in mind the principle of discarding nothing as ‘waste’ the wooden planks were also pieced together to form part of the flooring in the living areas.

Cane has been acquired from the neighbourhood, treated and wound around the grillwork to create subtle screens for privacy and for various furniture. 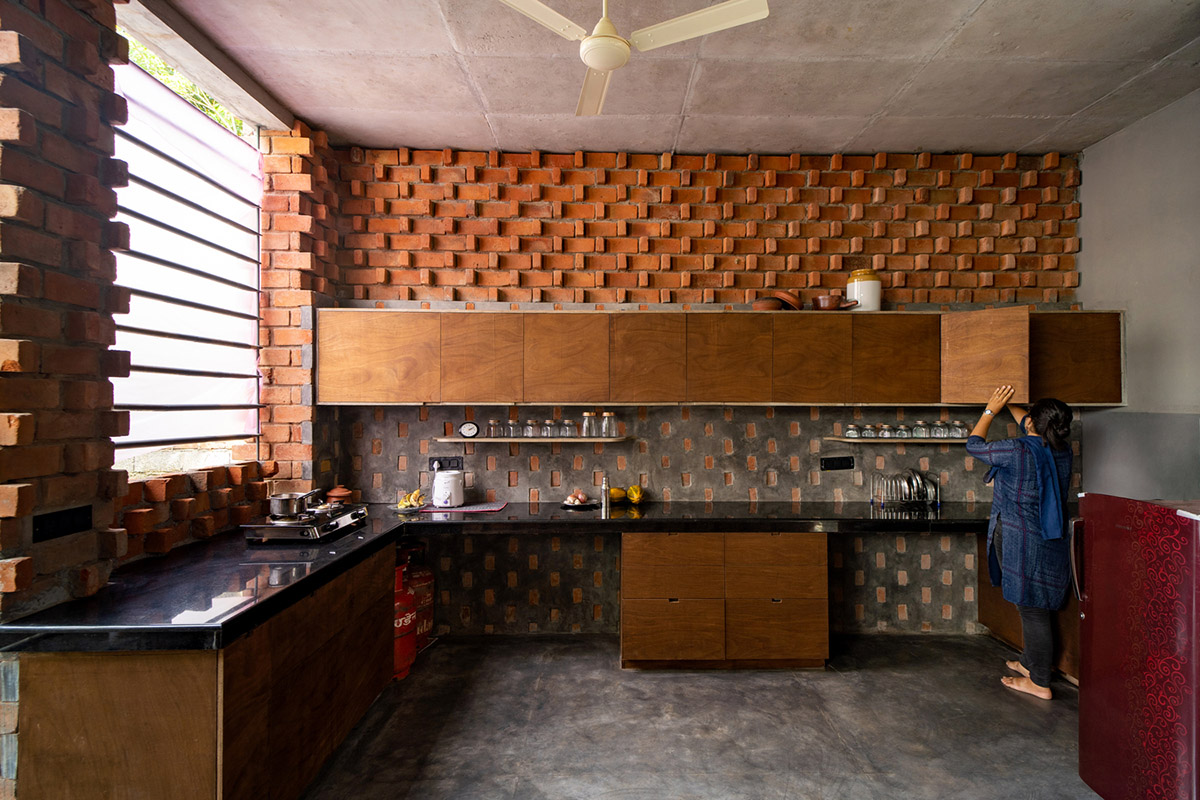 The Pirouette House features the "Last of the Mohicans" fired bricks as an ode to the stellar practice of Laurie Baker with spaces that are made beautiful by the pure geometry and patterns created by the walls that seem to be coming alive and pirouetting around. 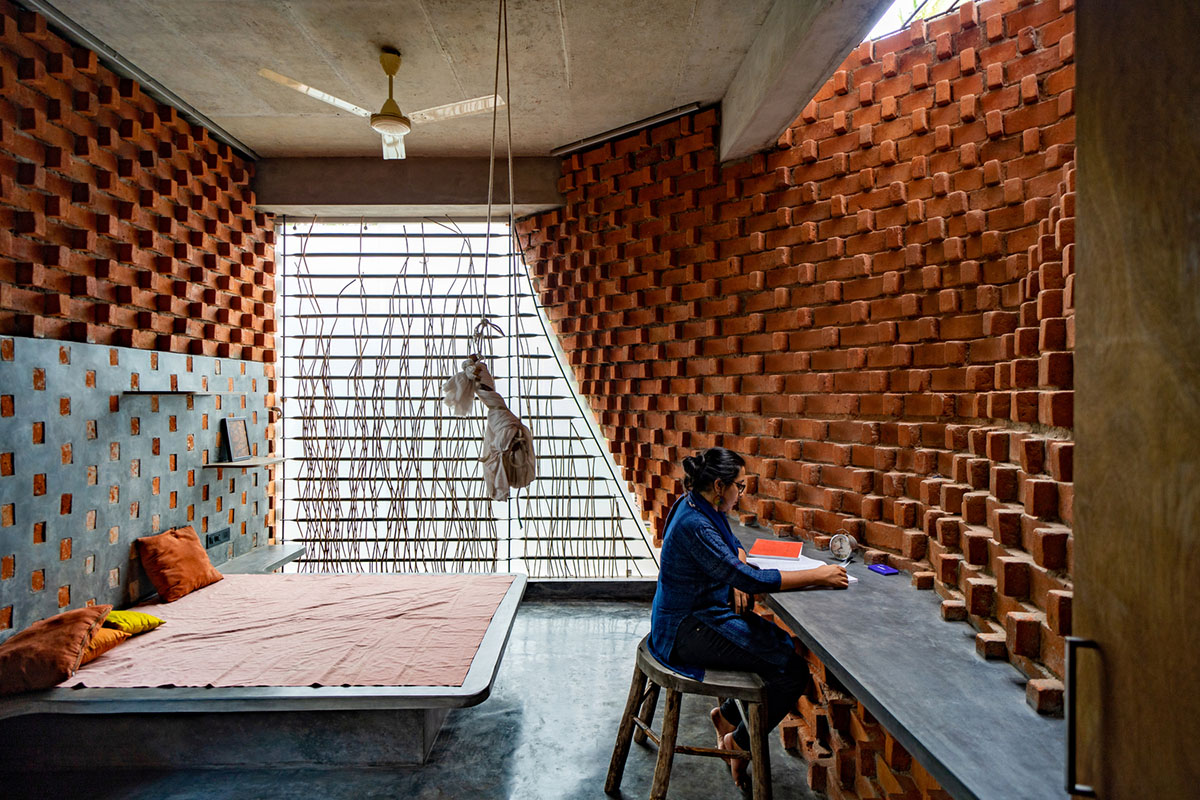 They effectively reduce the overall cement consumption by 40% and steel consumption by 30%.These replace the R.C.C Slab in roofing as they are as strong as 1200 kg/m2. 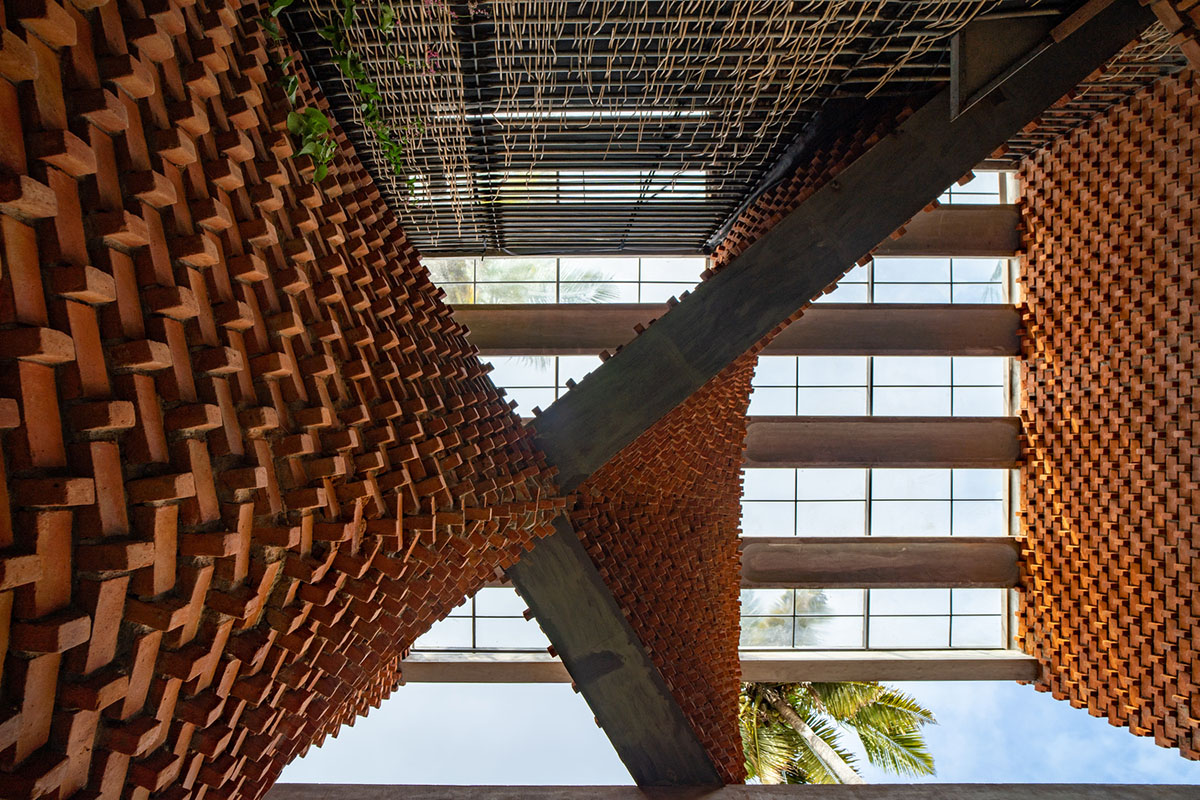 Oxide: Floor and selected walls have been finished with grey and yellow oxides.

Cane: Cane has been treated and woven together in-between the grillwork to act as a partial screen for privacy. 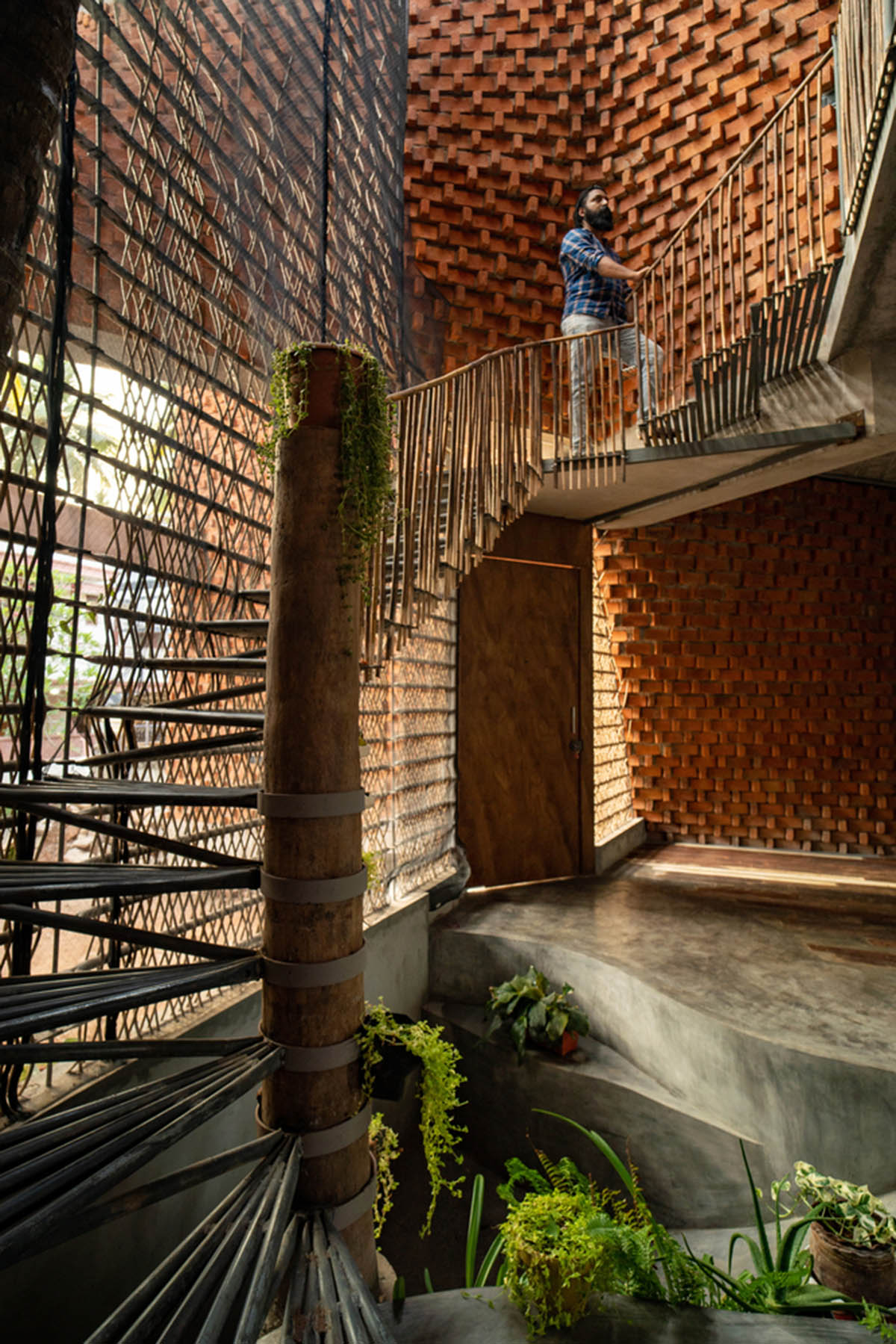 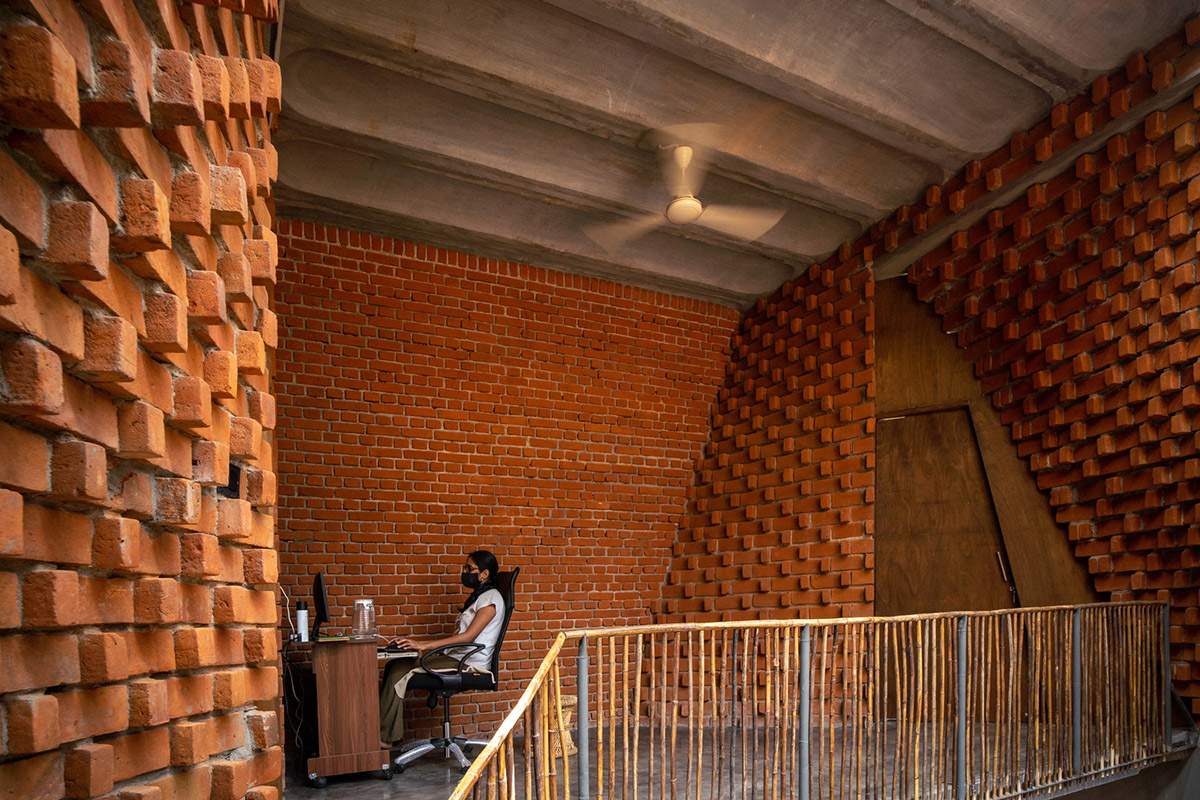 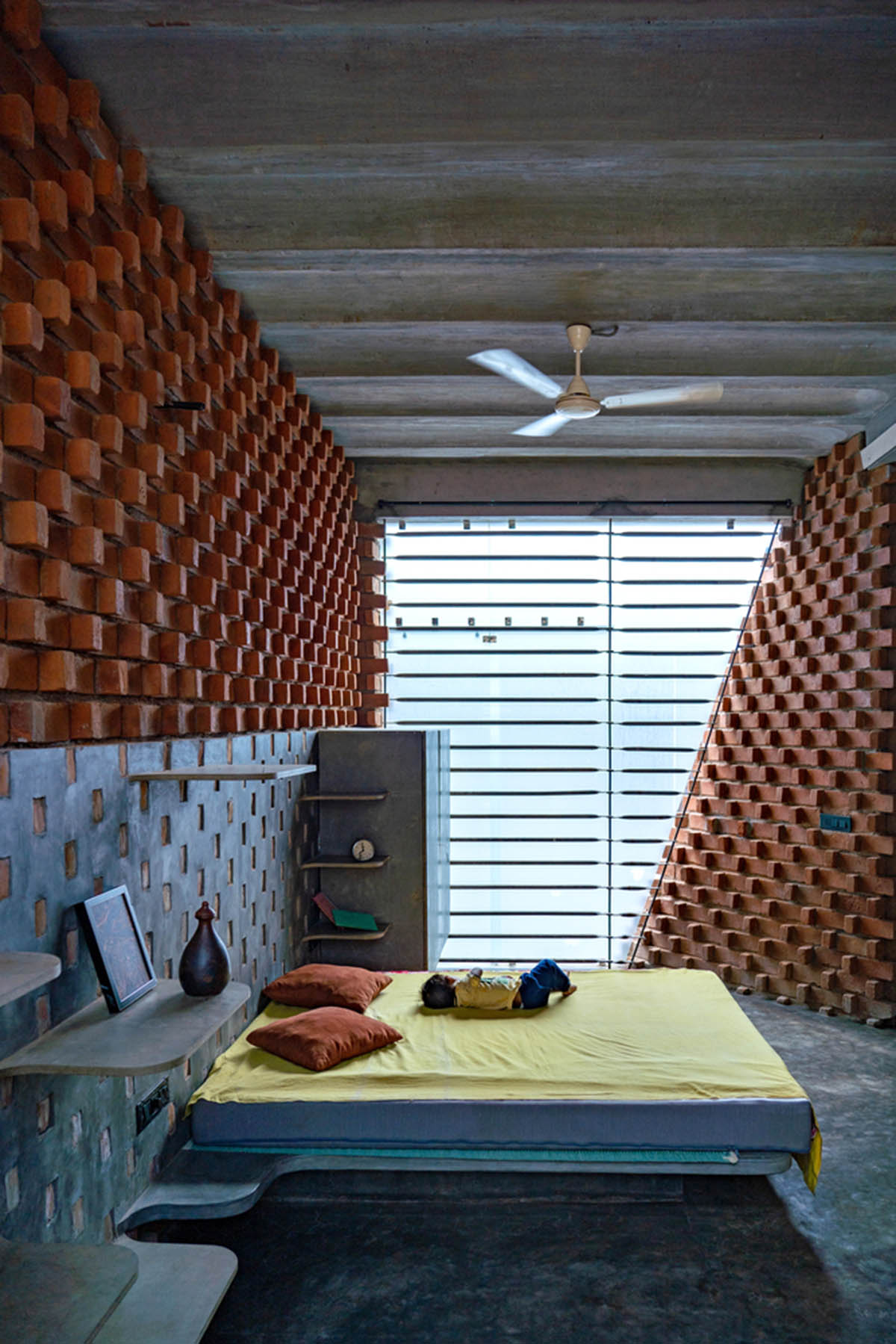 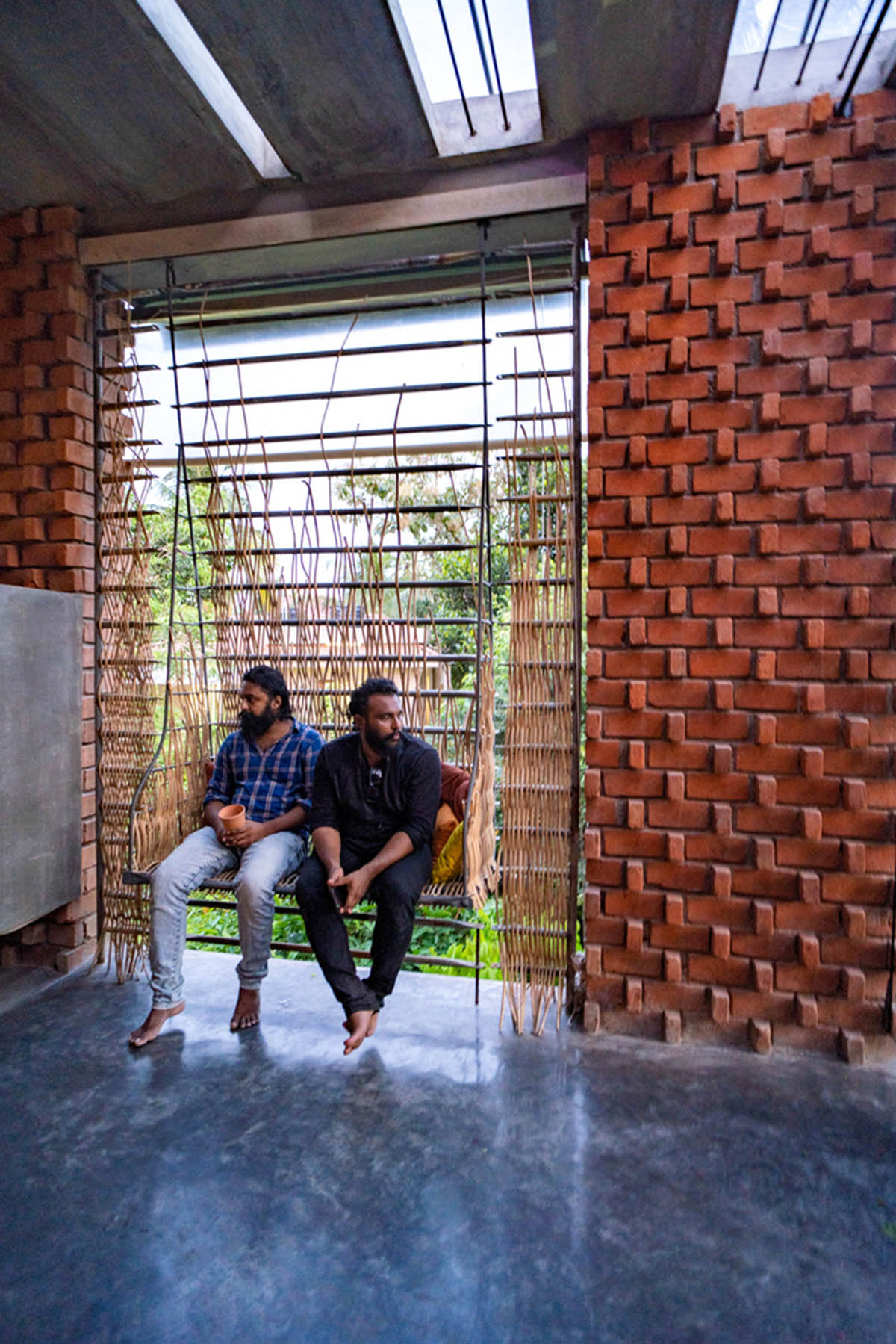 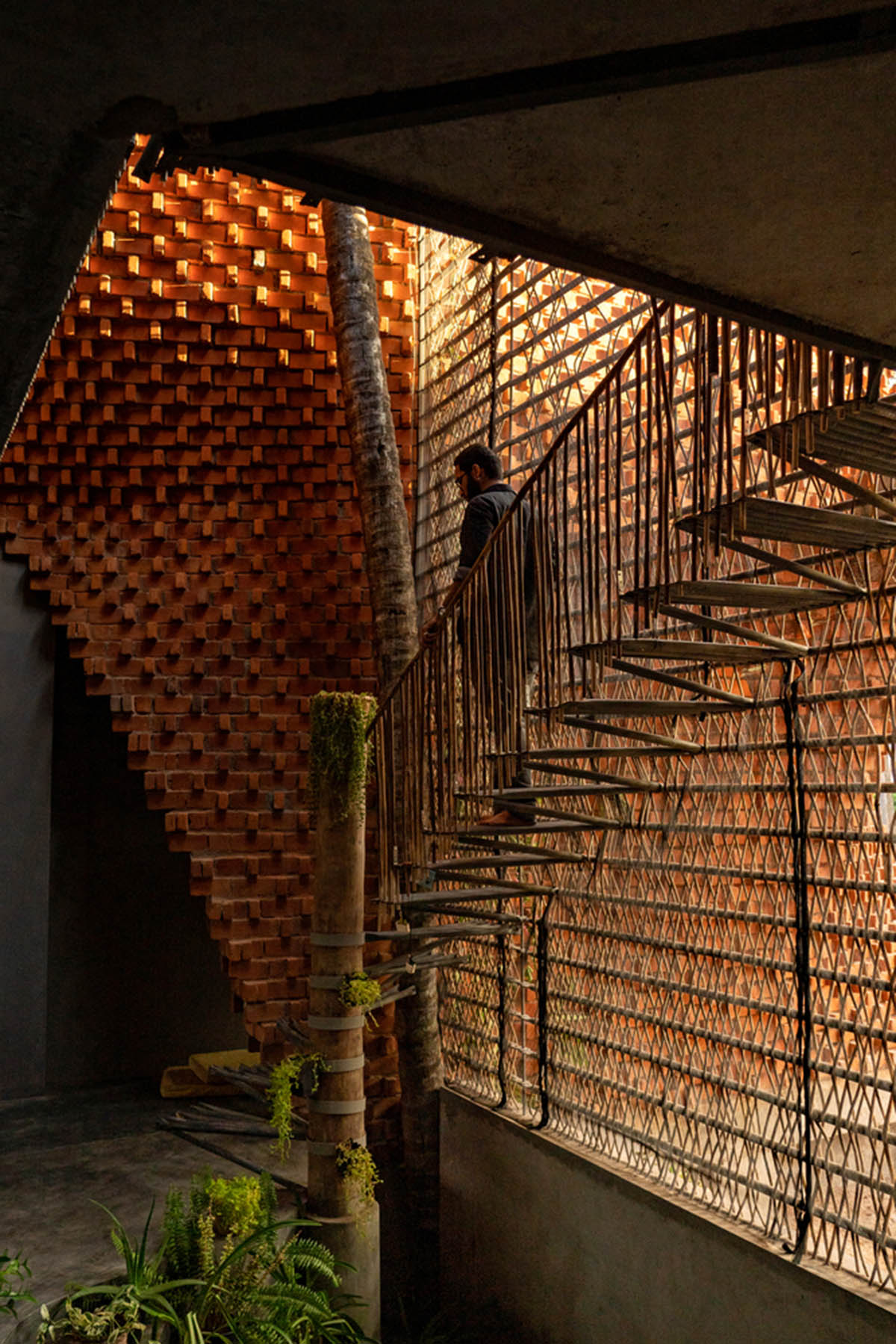 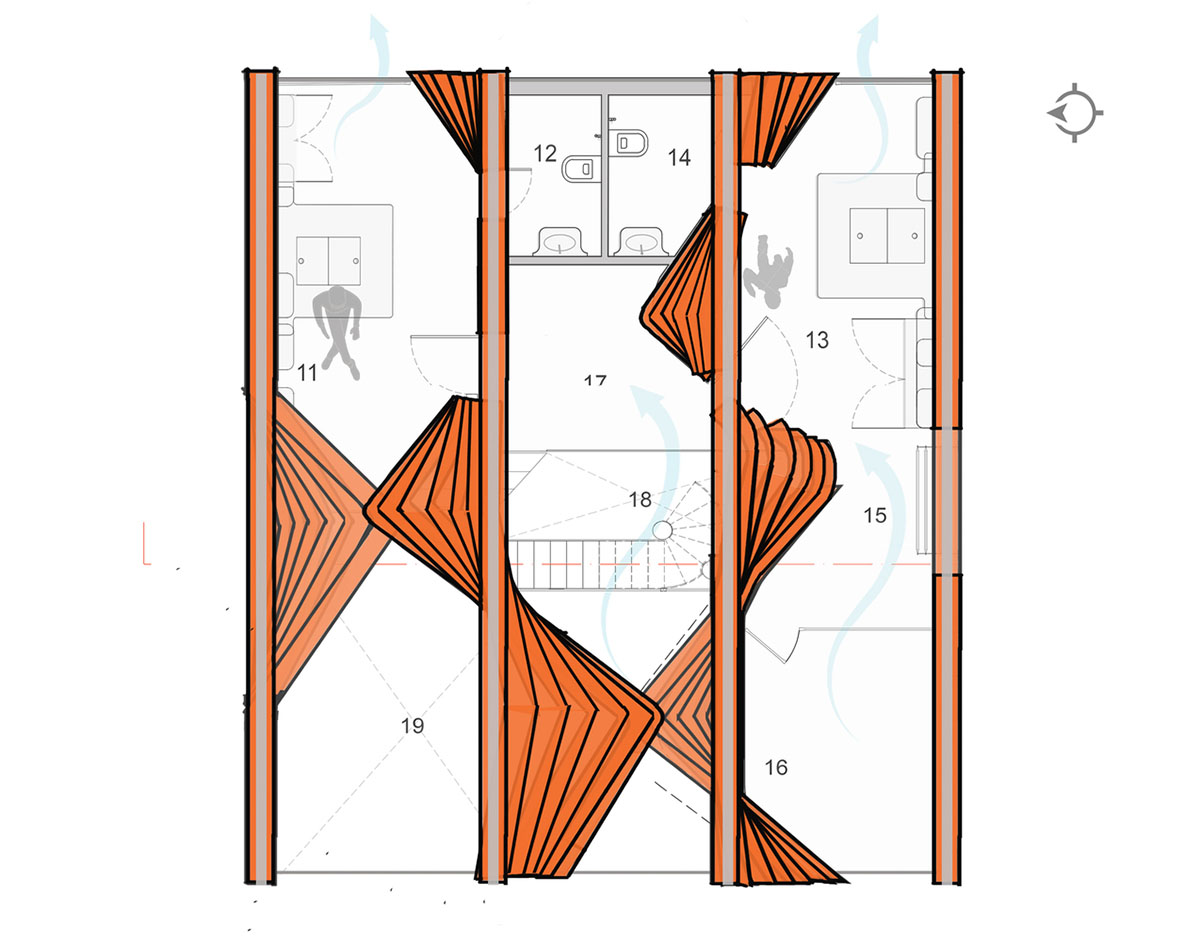 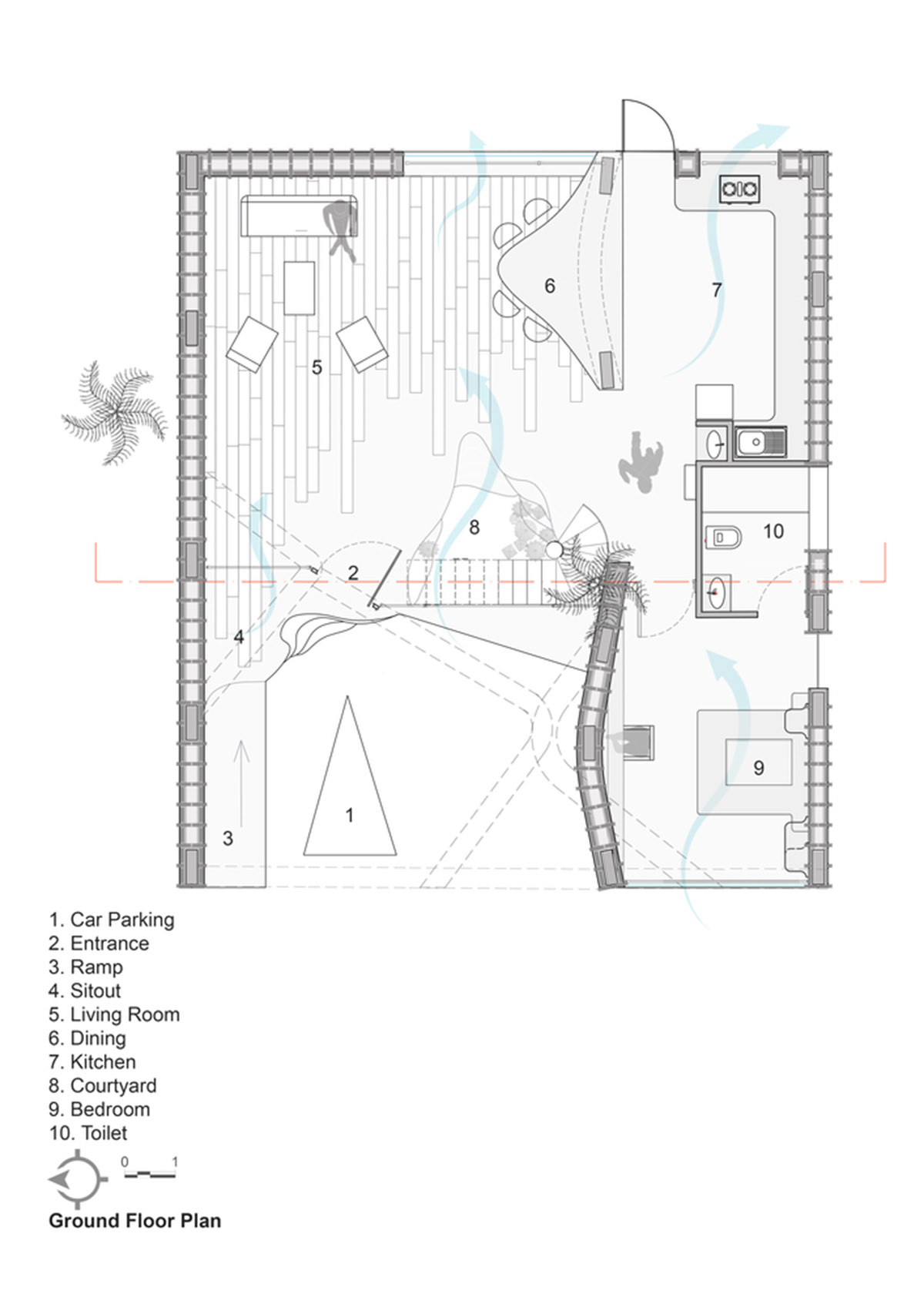 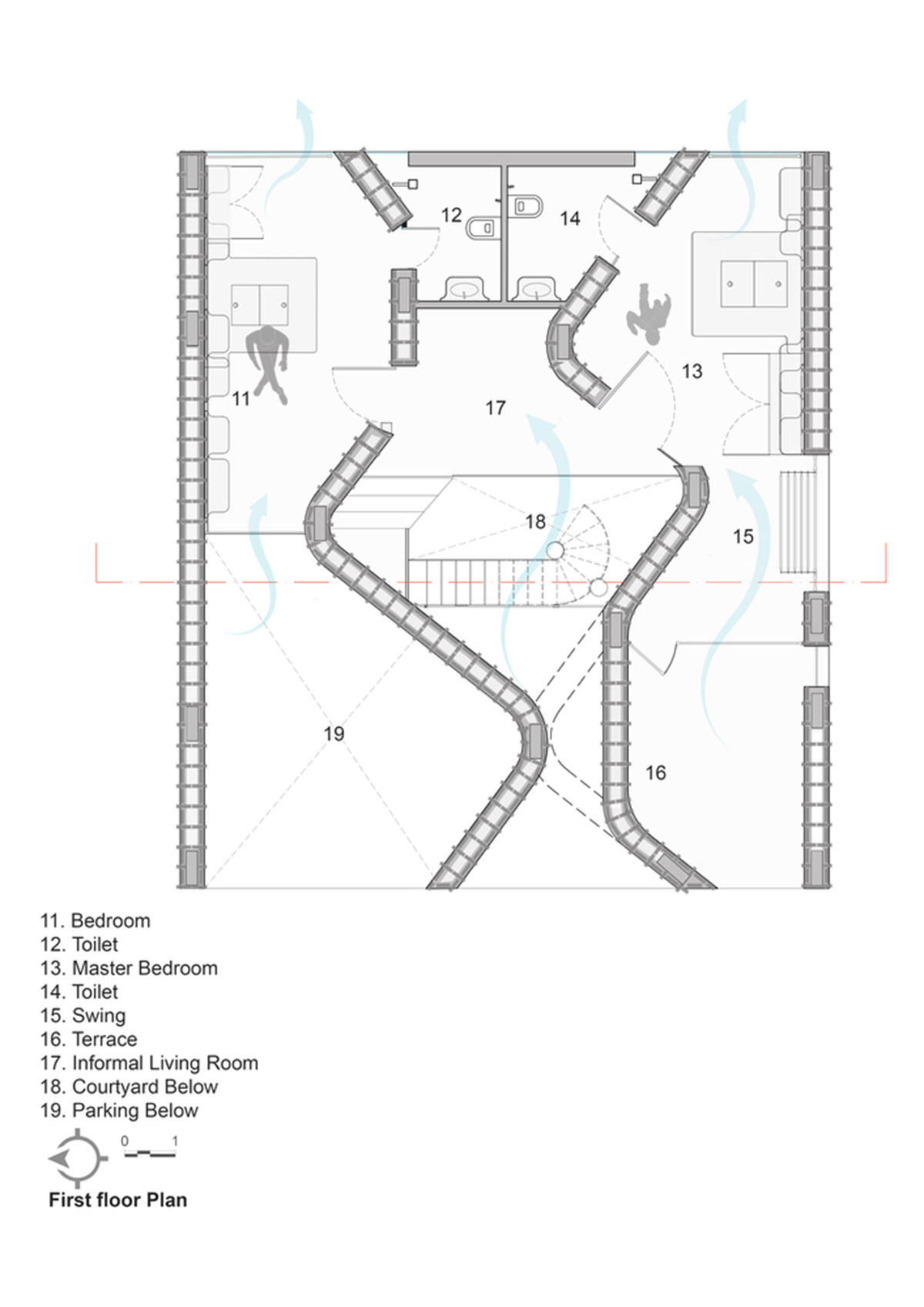 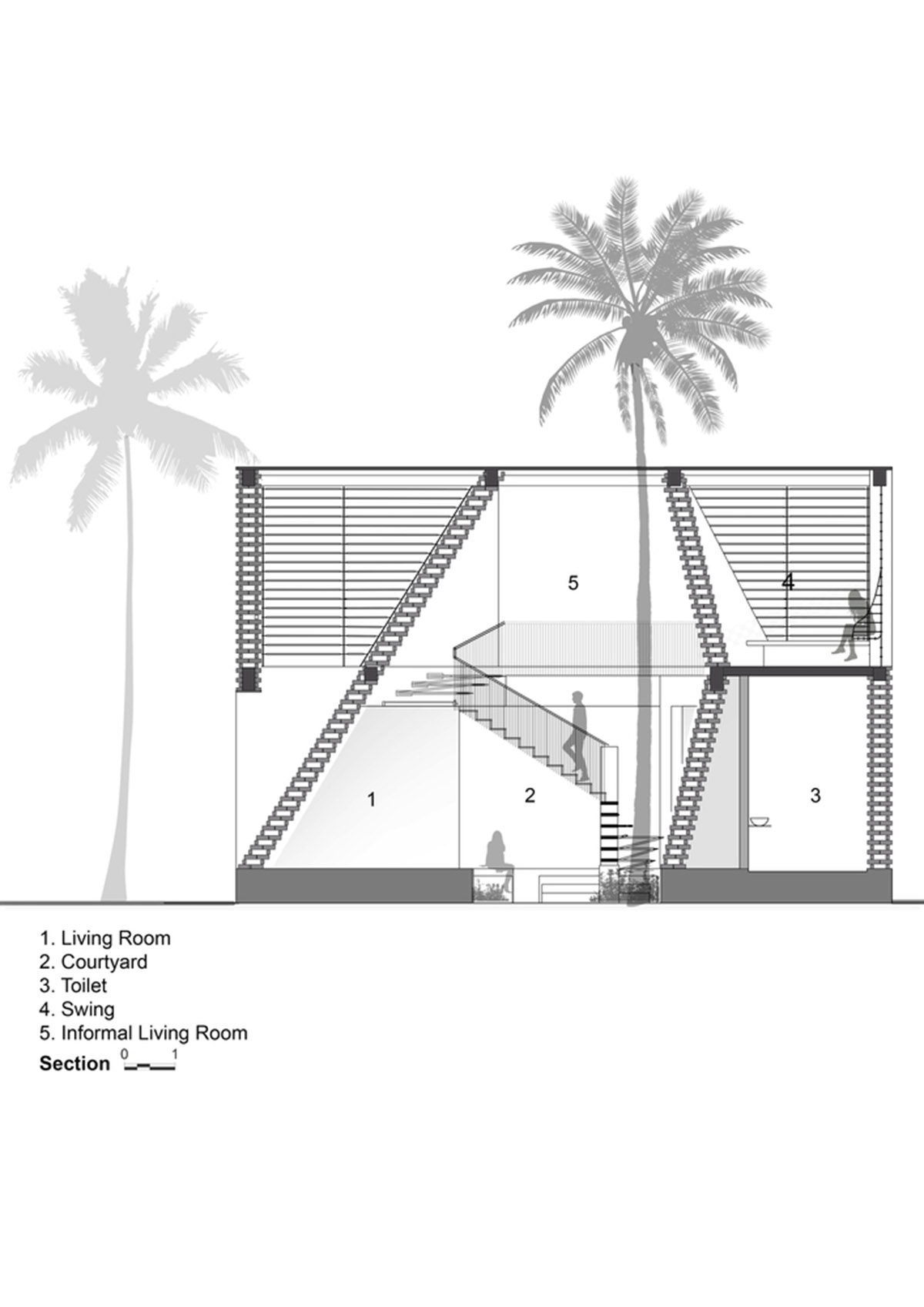 Wallmakers, led by Vinu Daniel, have devoted themselves to the cause of using mud and waste as the chief components, to make structures that are both, utilitarian and alluring.