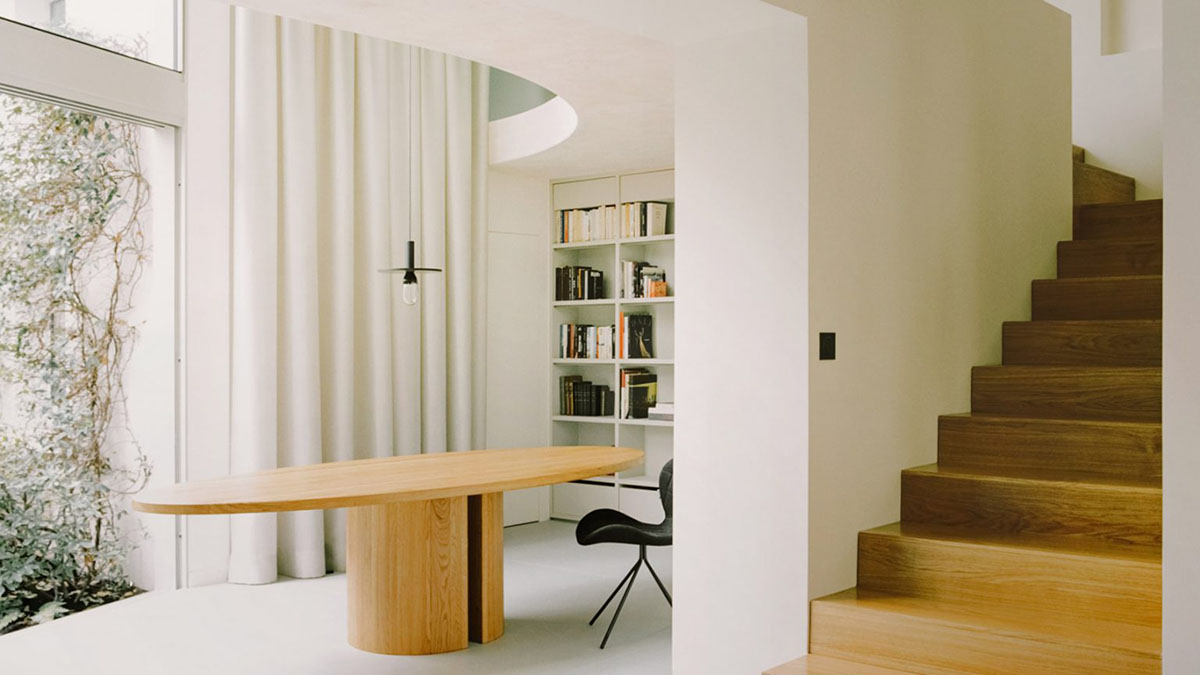 Paris-based architecture firm Clément Lesnoff-Rocard in collaboration with Gil Percal have revived a 19th-century dwelling with bright and calm interiors on the outskirts of Paris, at the very foot of La Défense, France.

Named The Island House, the 300-square-metre house features a white concrete curved bridge that gently floats above the users' head and opens up a climbable library.

Conceived as an introverted house, it is a modern home that triggers calmness and silence with continuous layout and matte-colored palette. 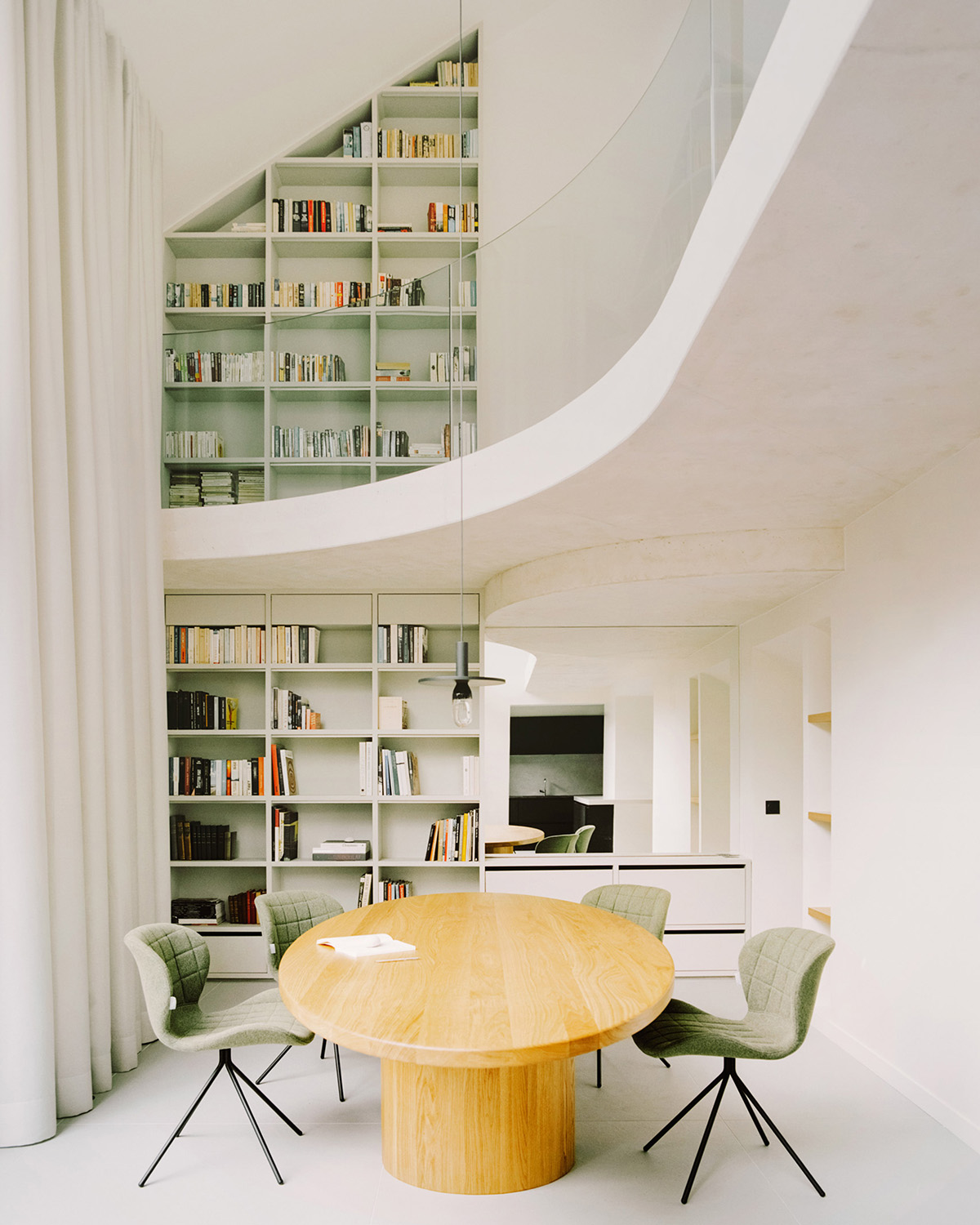 Renovated for a family, the house metaphorically and literally offers island-like interiors for whom want to escape the busy life of the city, the home reaches even more vastness with its own garden. It is a new form of escapism embodied in texture, materials and the spaces. 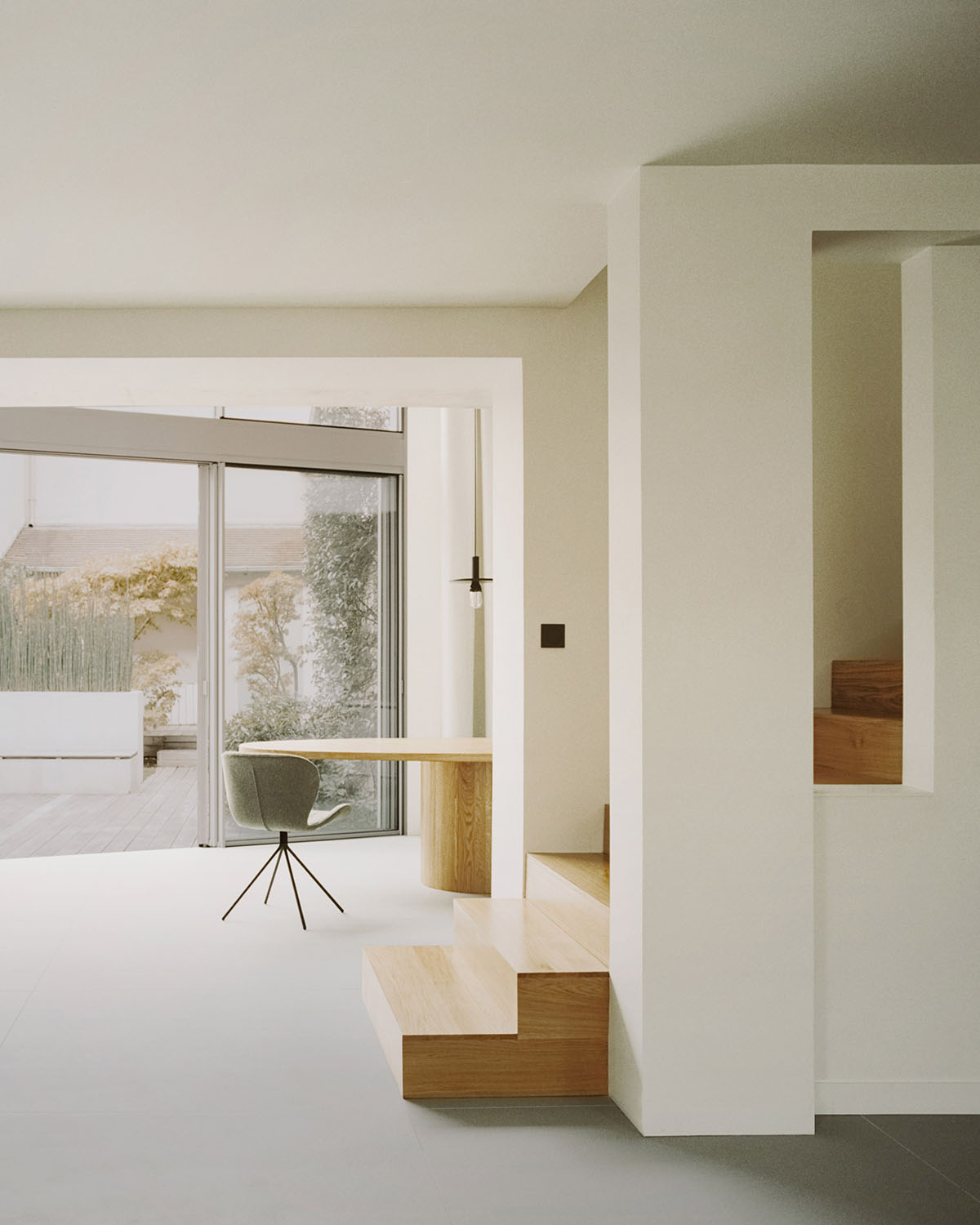 "Located on the outskirts of Paris, at the very foot of La Défense, an otherworldly accumulation of oversized high risers, the house stood almost lost on the edge of a tiny little street that ends abruptly abutting the massive fundaments of a cluster of towers," said Clément Lesnoff-Rocard.

"This brutal situation, in between high density modernist utopia and the modestly grandiloquent 19th century architecture, emphasizes the feeling of being a tiny little Défense-less being."

According to the architects, the project "could be considered as an antagonist allegory to the famous movie Cast away, starring everyone’s beloved Tom Hanks, lost on an island." Clément Lesnoff-Rocard said that "it shows one’s relationship between isolation and the concept of wholeness, or how to create your own symbolical home out in the wild, despite being separated from the rest of the world."

"The project is about finding a way for a family to have its own universal and symbolical wild landscape inside their home, surrounded by the city but deeply separated from its looming pressure."

"The house seemed like an oyster without a shell, lost in the ocean," as the architects explains. 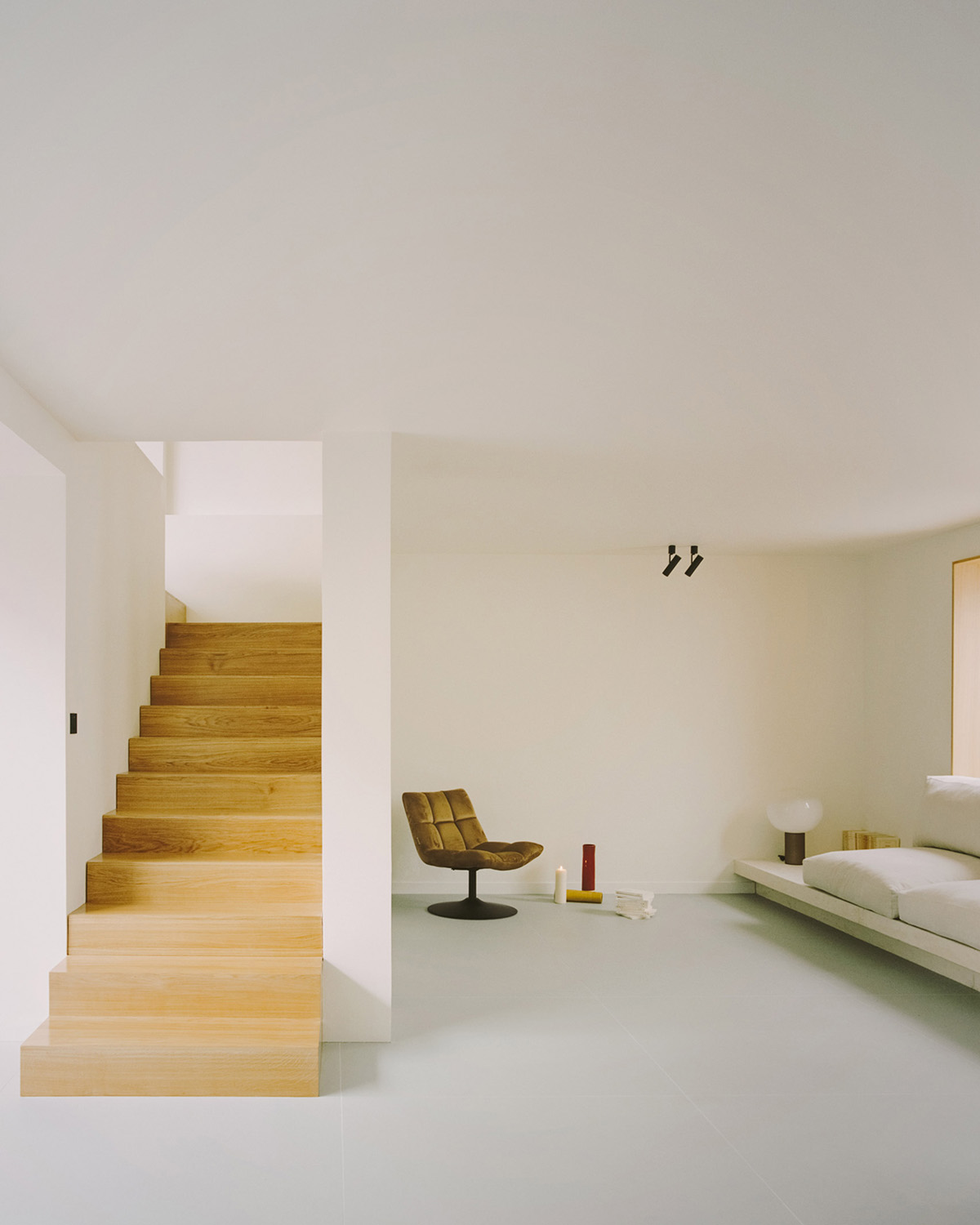 The house is articulated around "a little exotically planted patio garden" and when the architects visited the house for the first time, they considered that the house "had to be protected from this outer predatory world, turning its back to the street and only looking at itself, its garden and its own qualities, yet to be found."

"What a moment of divine beauty, when you make way for this other truth where your usual trivial facilities become natural elements," the studio added. 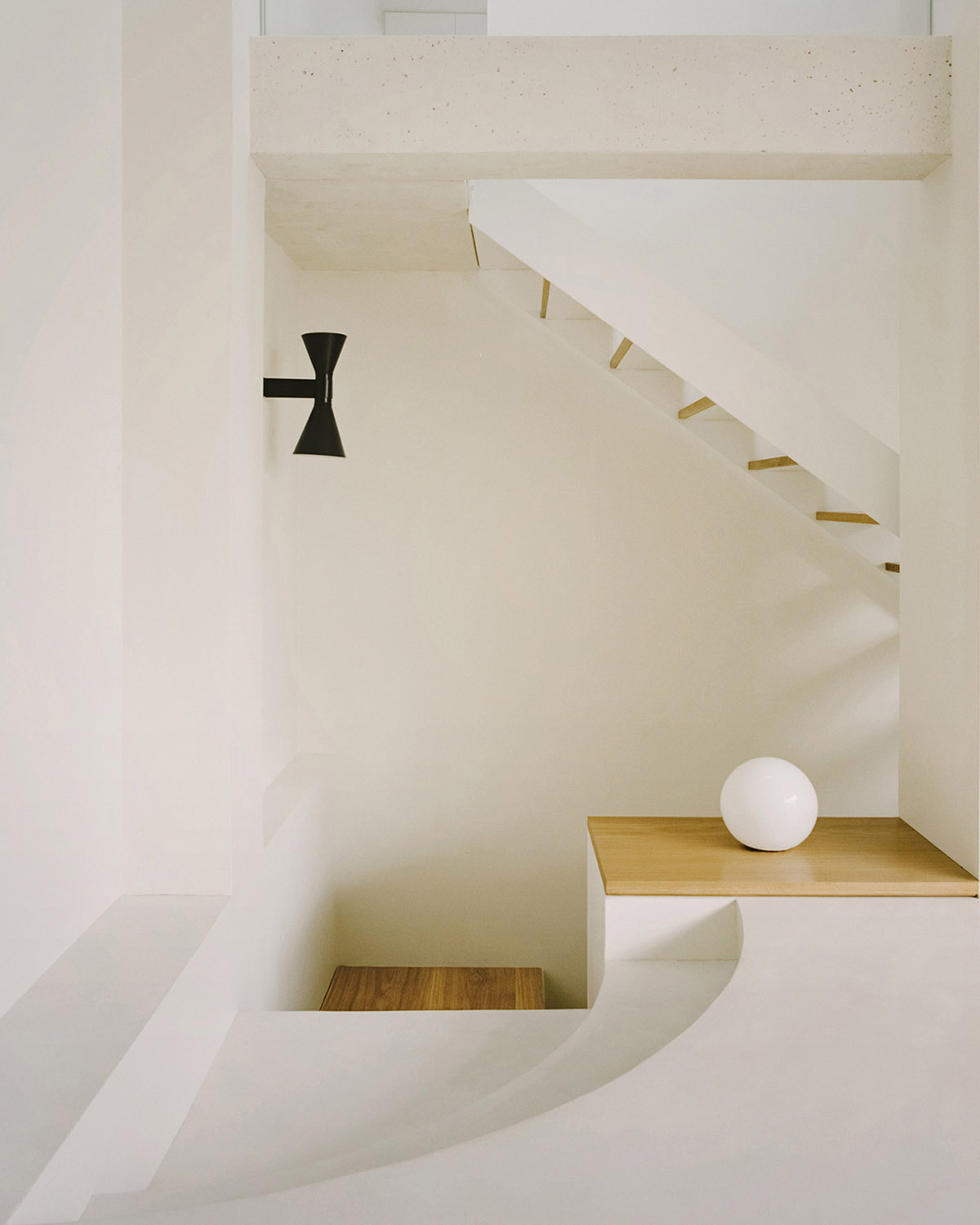 "When your grey green tiled floor becomes shallow water. When your long concrete sofa becomes a sand beach where the water tickles your feet."

As the architects explain the interiors of the house, a massive oak tree table becomes the big tree around which users gather as a family. 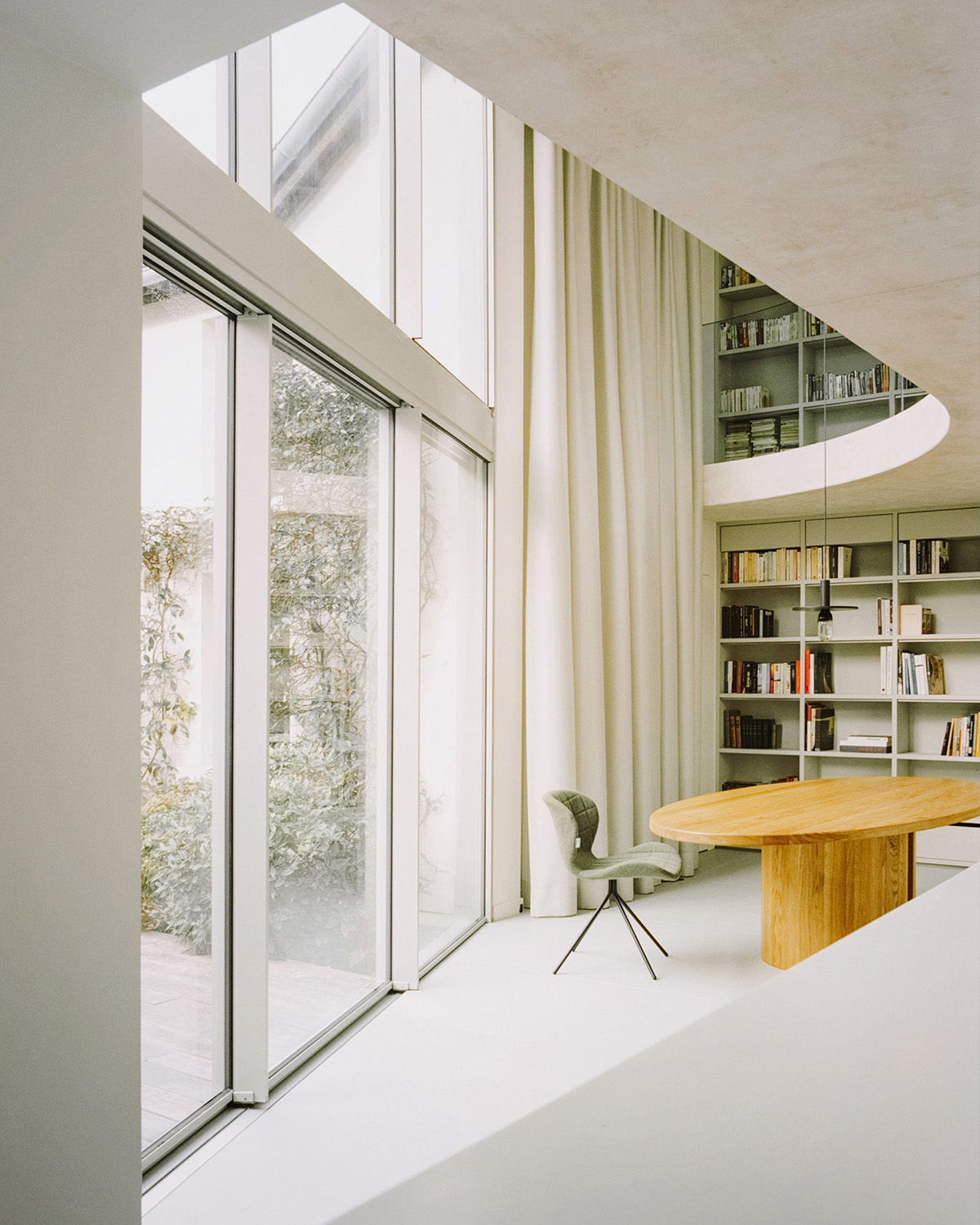 In addition, creating a matte black kitchen in the interior, the kitchen becomes the charcoal users found in the burnt forest. "When a towering library becomes the cliff you climb everyday, and the books in it become the stepping stones that help you get higher," said the architects.

The imagery of architects with materials continues in this sense. "When an oversized curtain becomes a waterfall, or even just the wind," they continued. 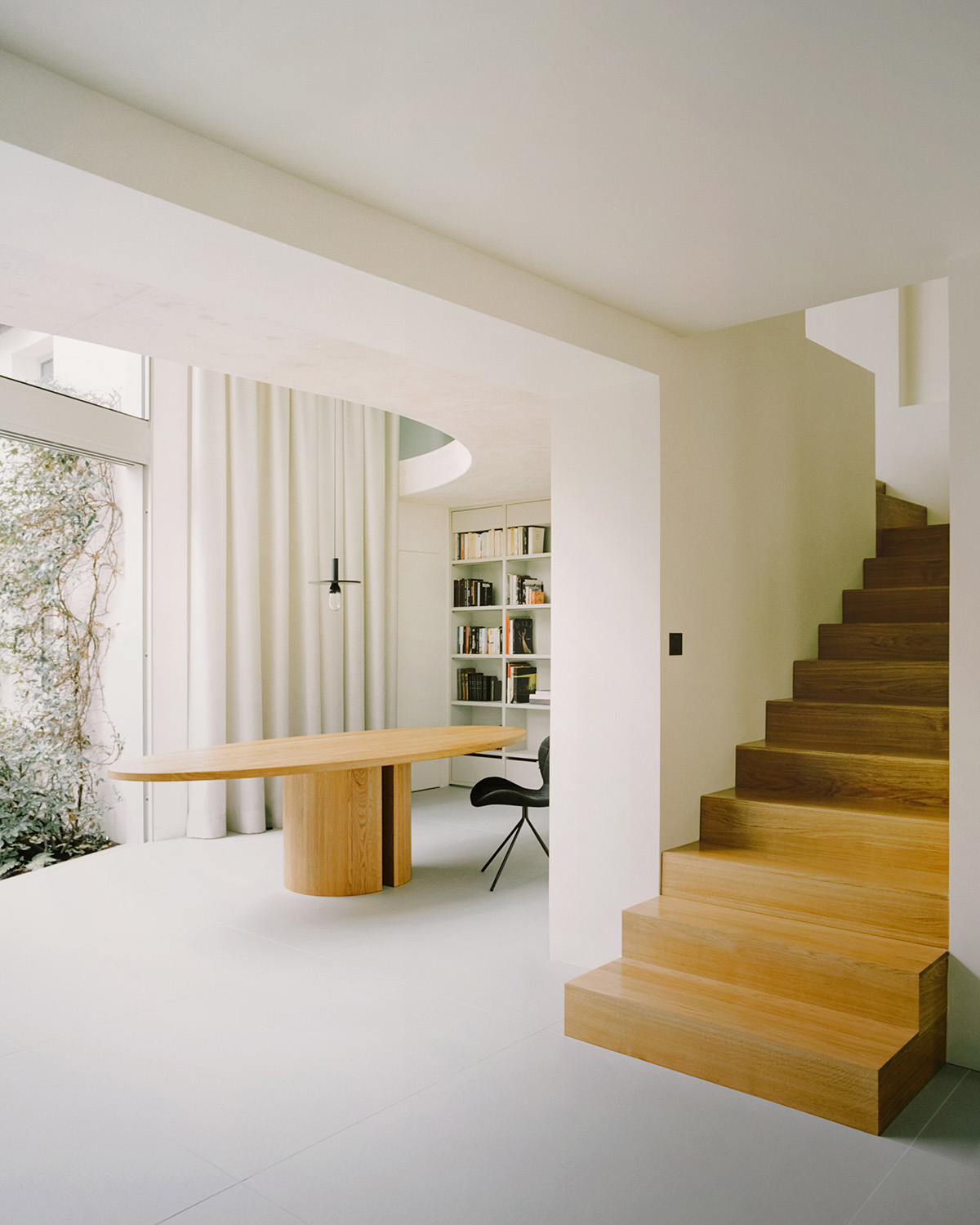 "When a white concrete curved bridge becomes a stratus, a low cloud, passing quietly above your head. When a gigantic bay window becomes nothing but the sky, with its sunsets and sunrises."

They designed a wooden staircase emerging "like from the shallow water" that becomes the beginning of a path to go somewhere else, up the mountain, above the clouds. The staircase connects the second and the third floor. 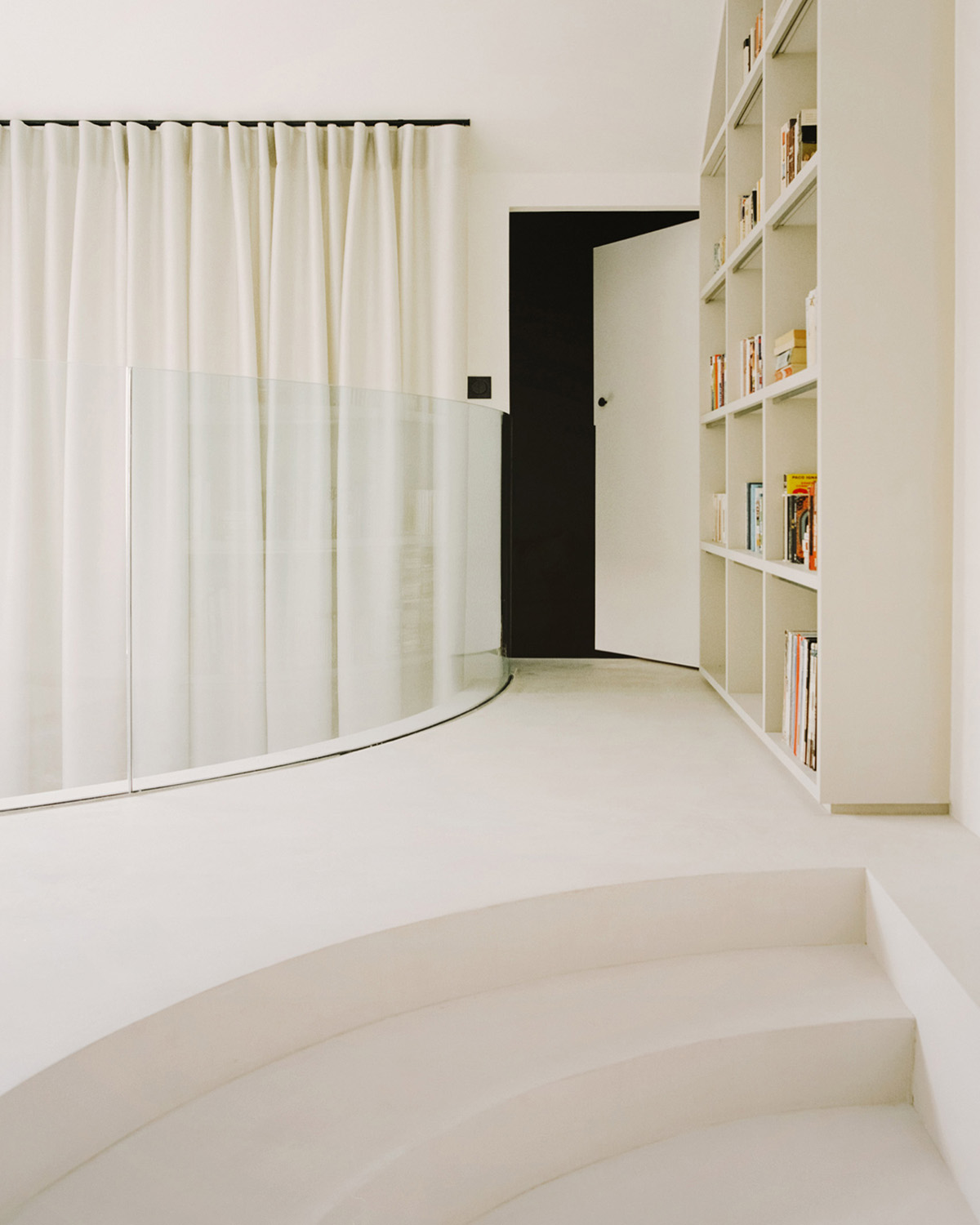 "Then you see it. It is your island, it is the island of everything."

"You can now close your book, put it back on the shelf and go for a walk in your garden, the real one."

On the second floor, there are three rooms, two bathrooms with mezzanine floor, while the third floor is dedicated a master bedroom with  a big master bathroom. 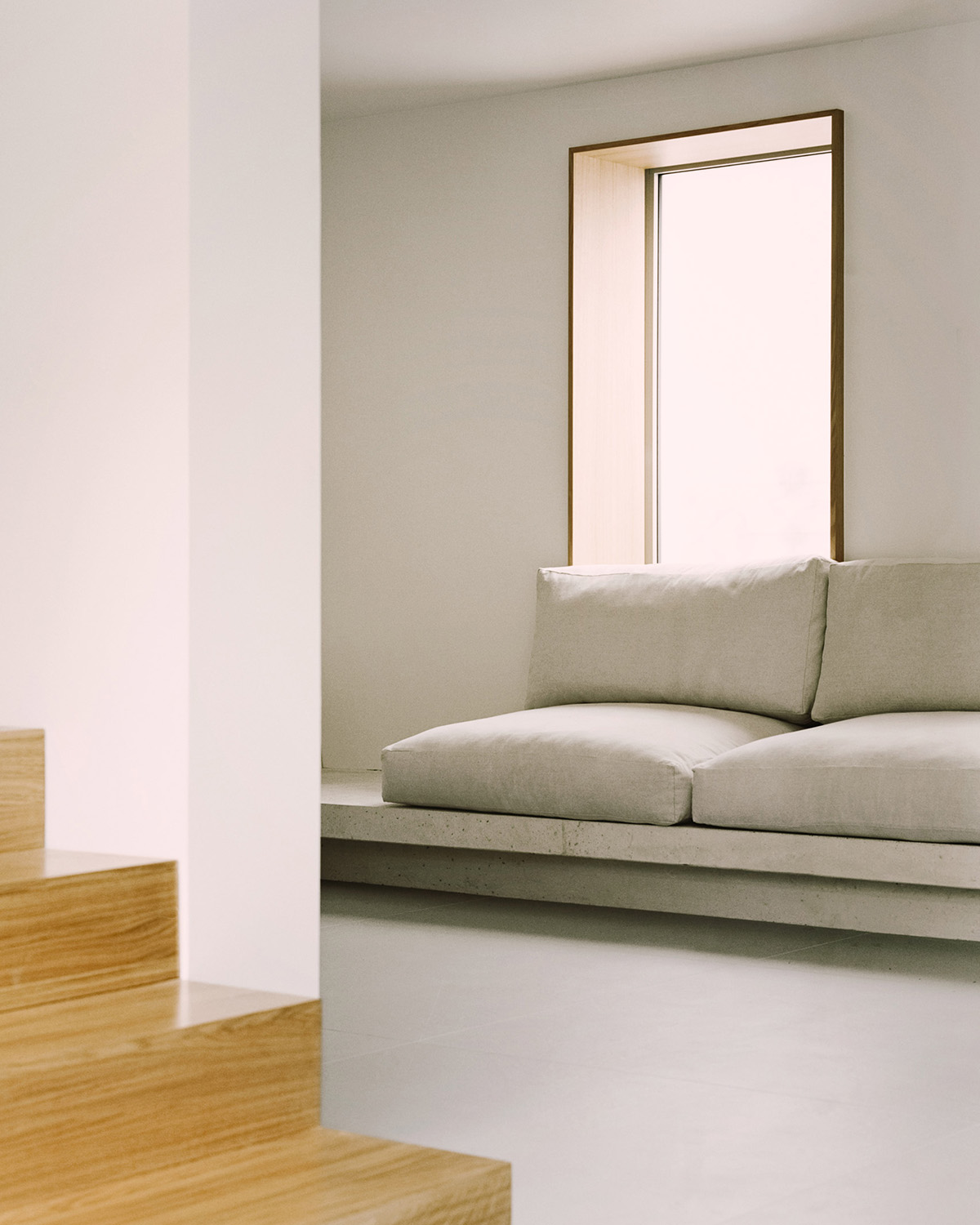 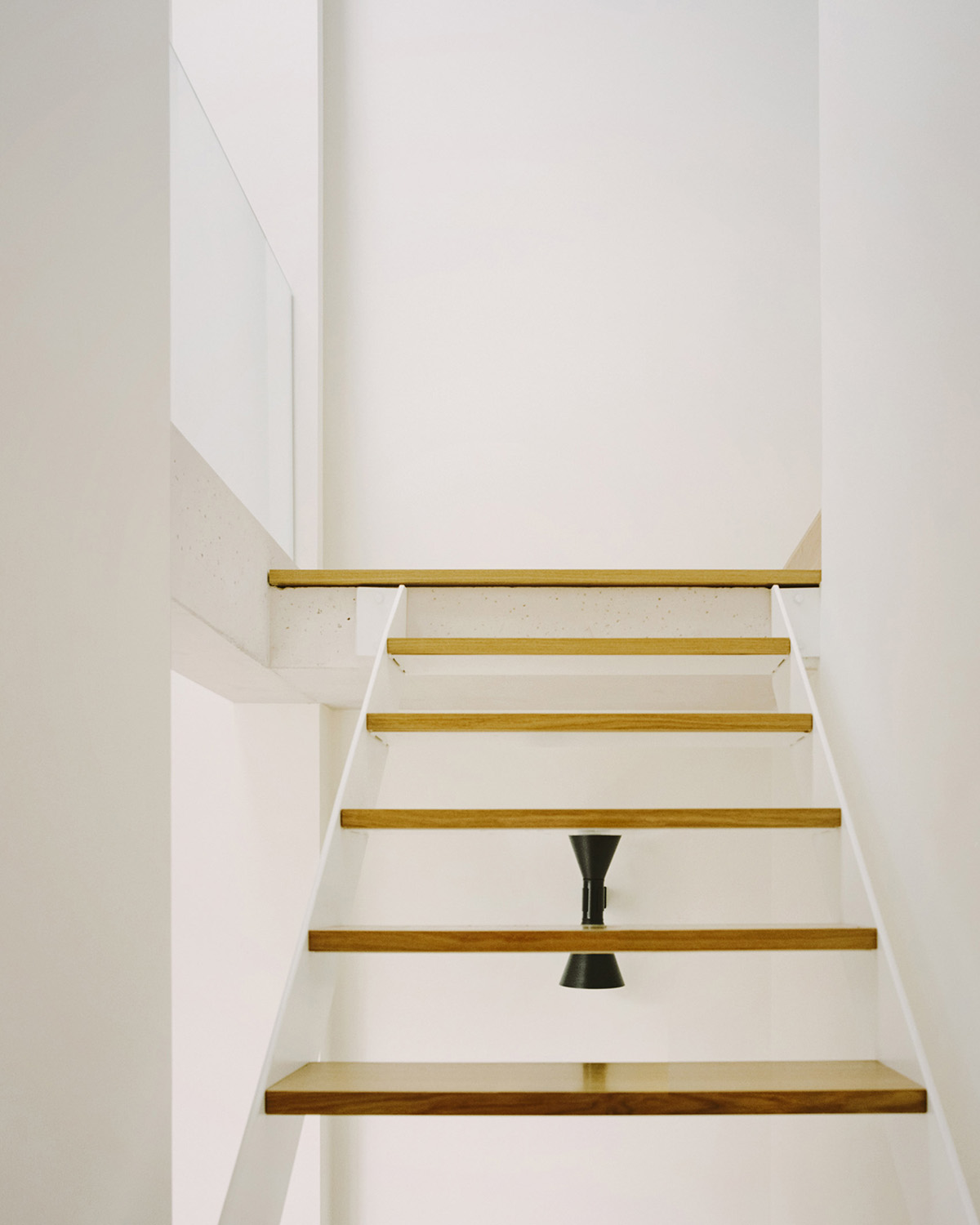 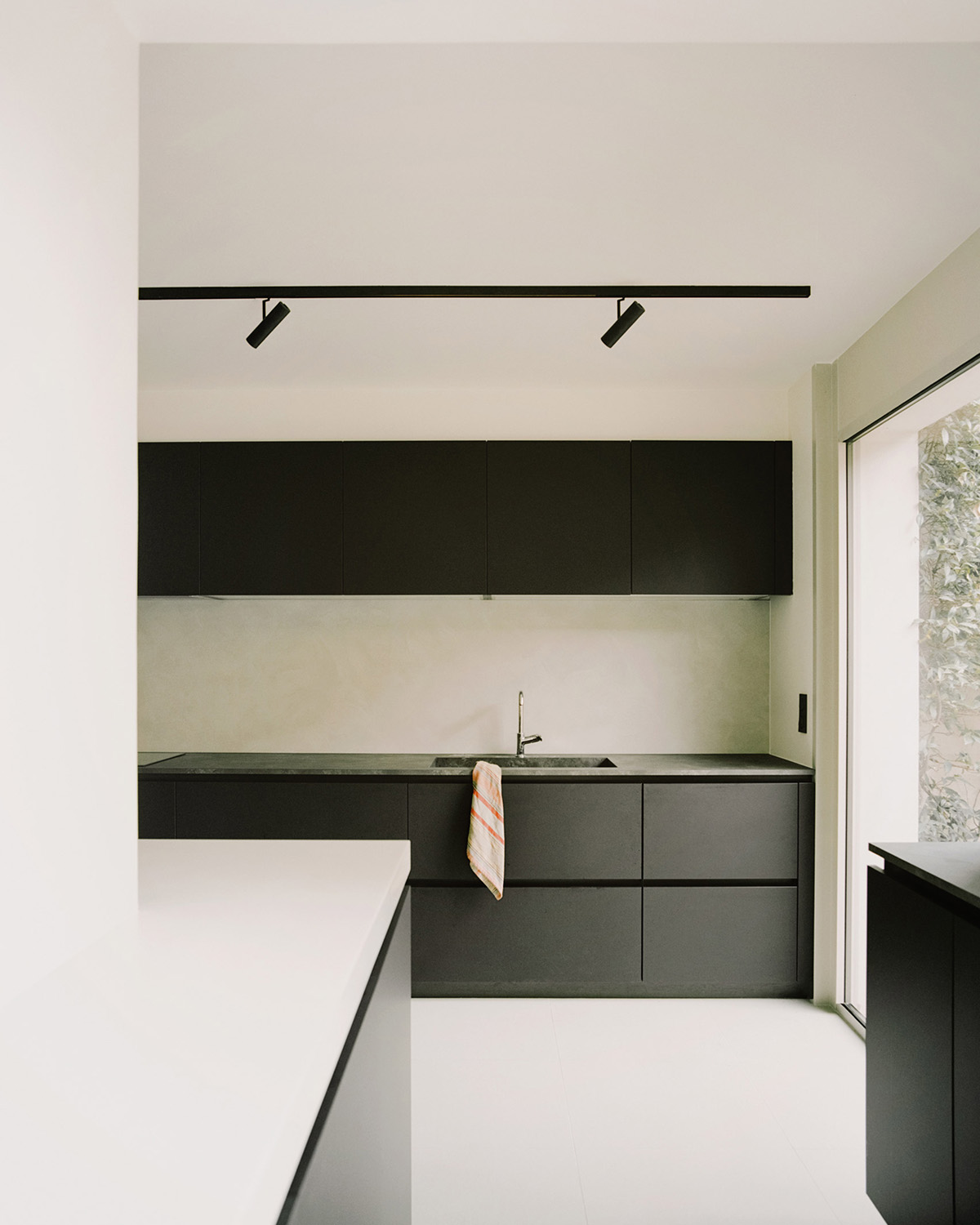 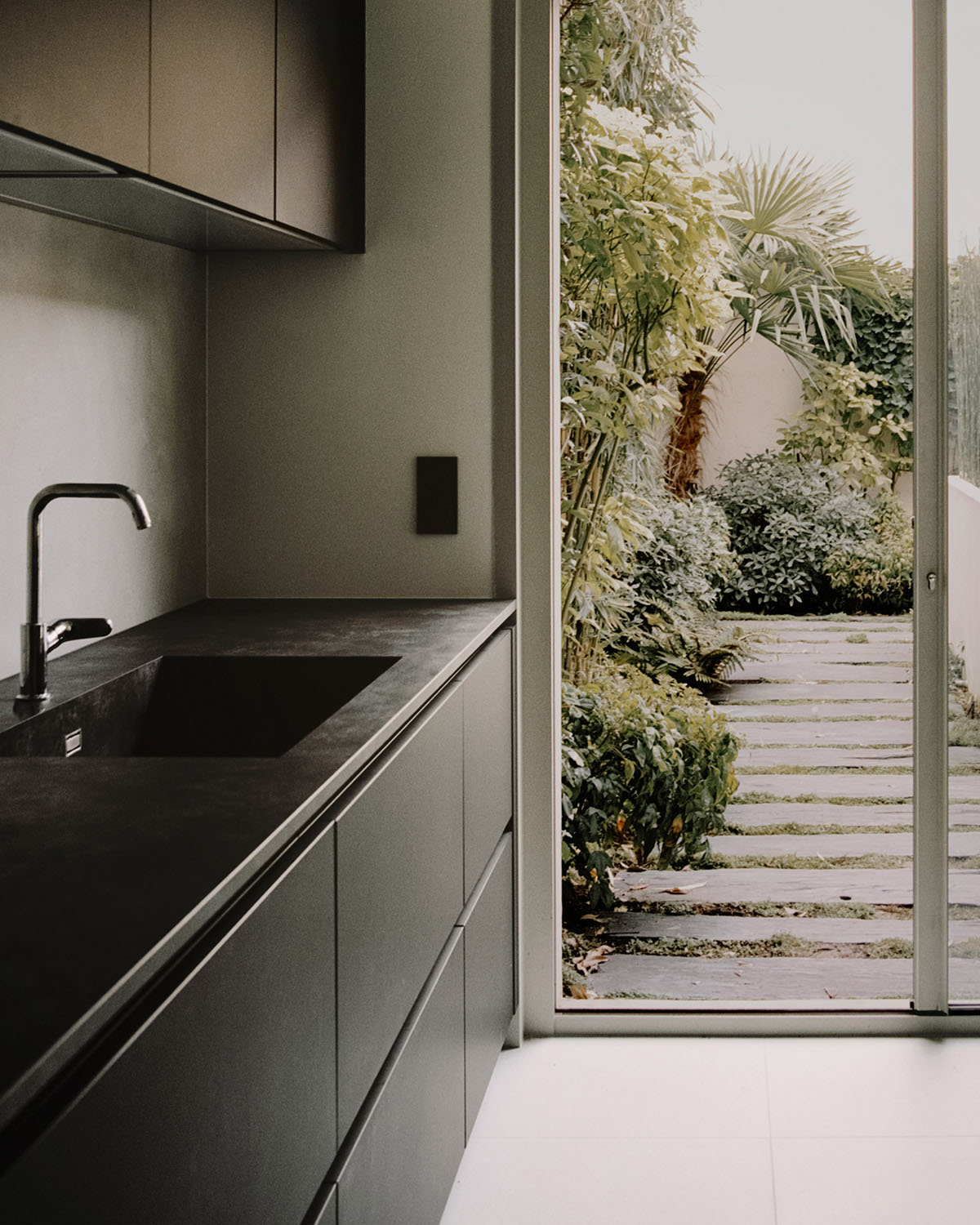 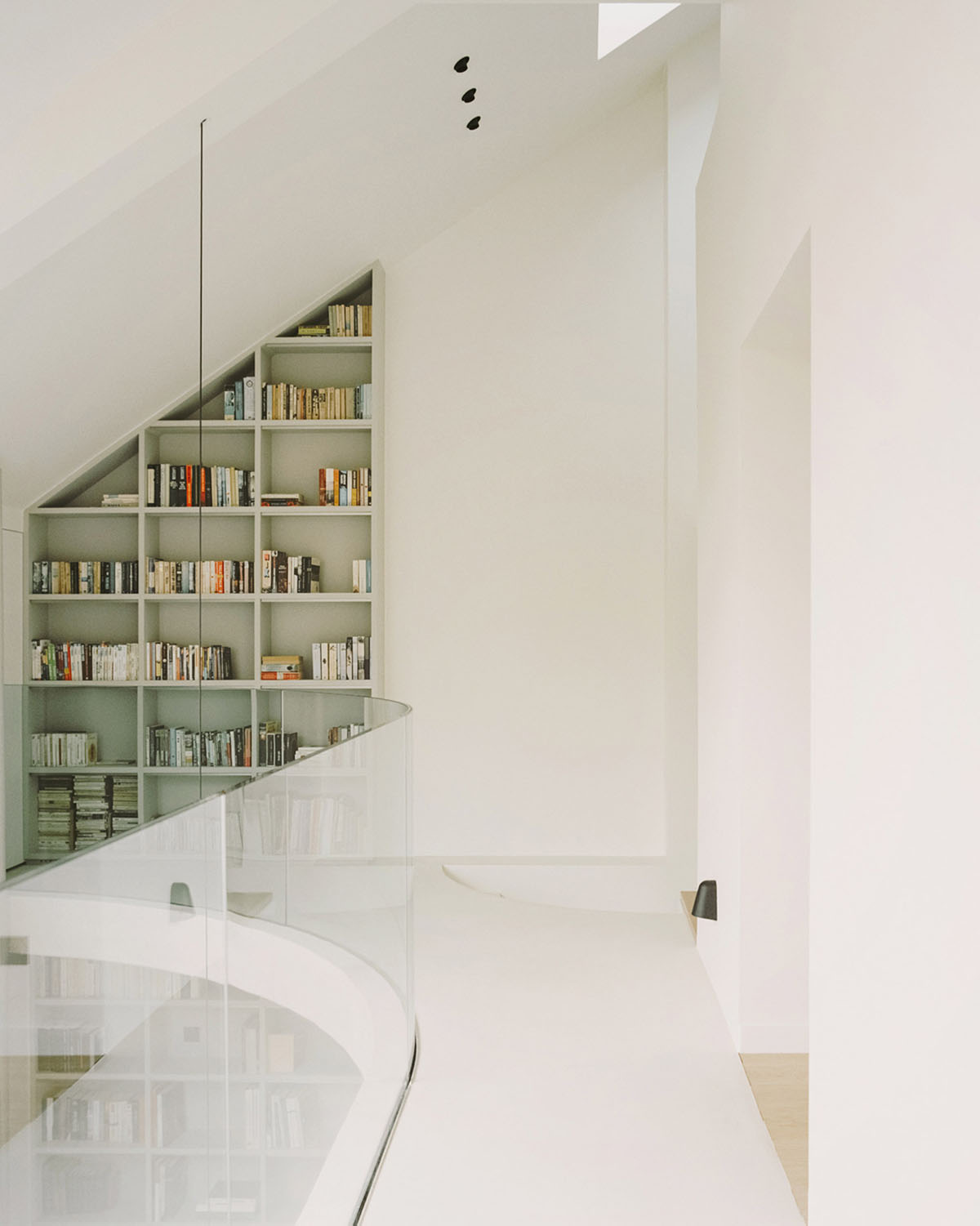 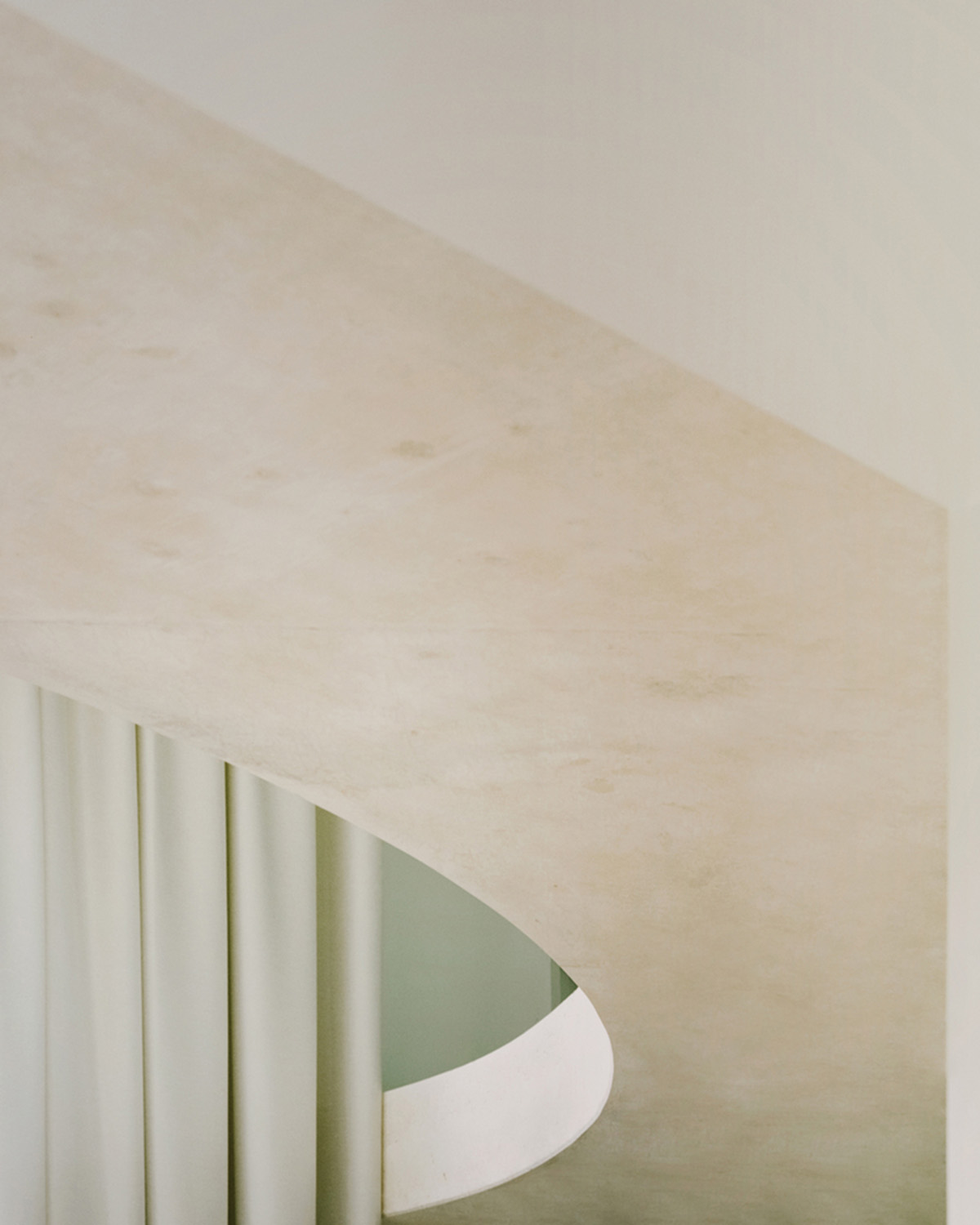 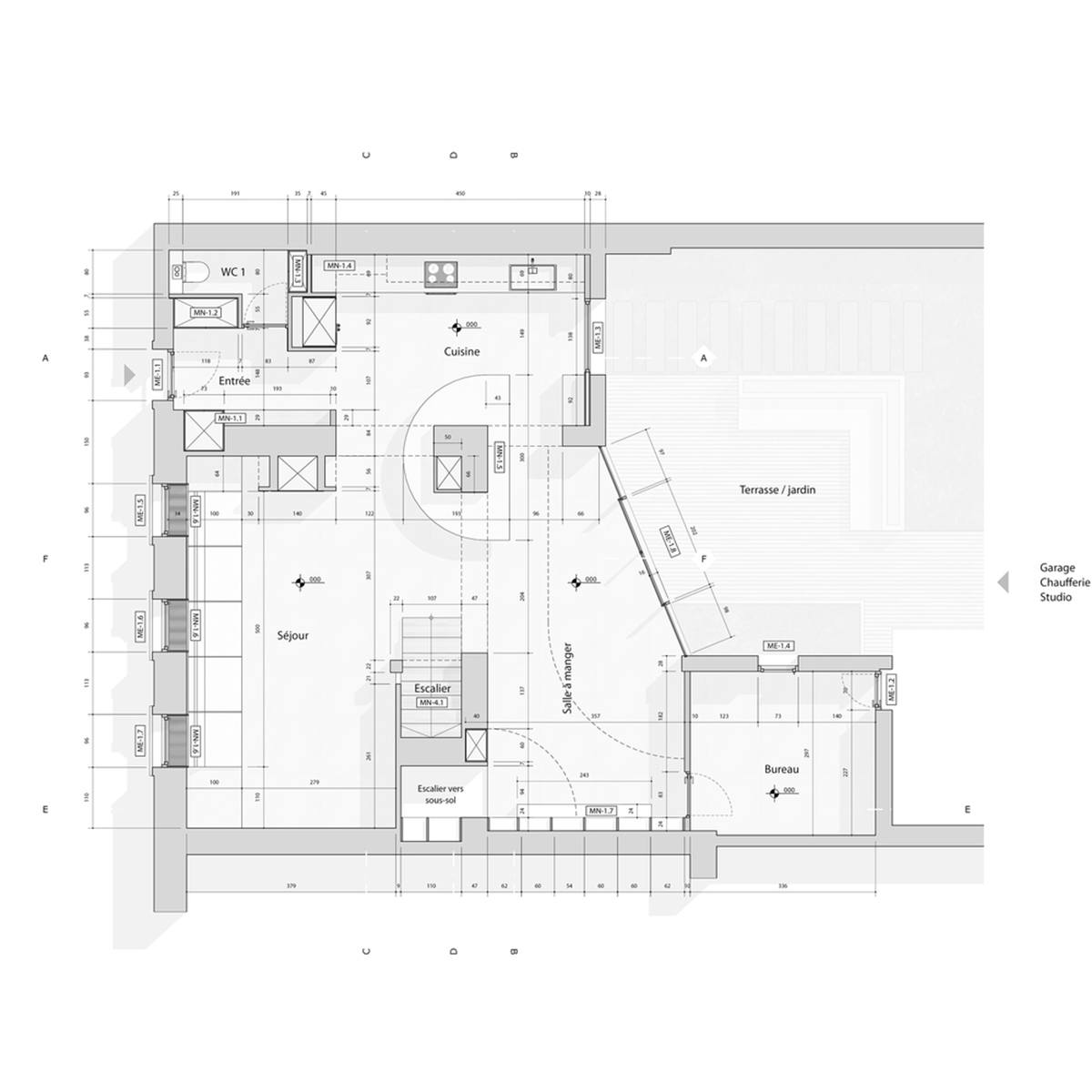 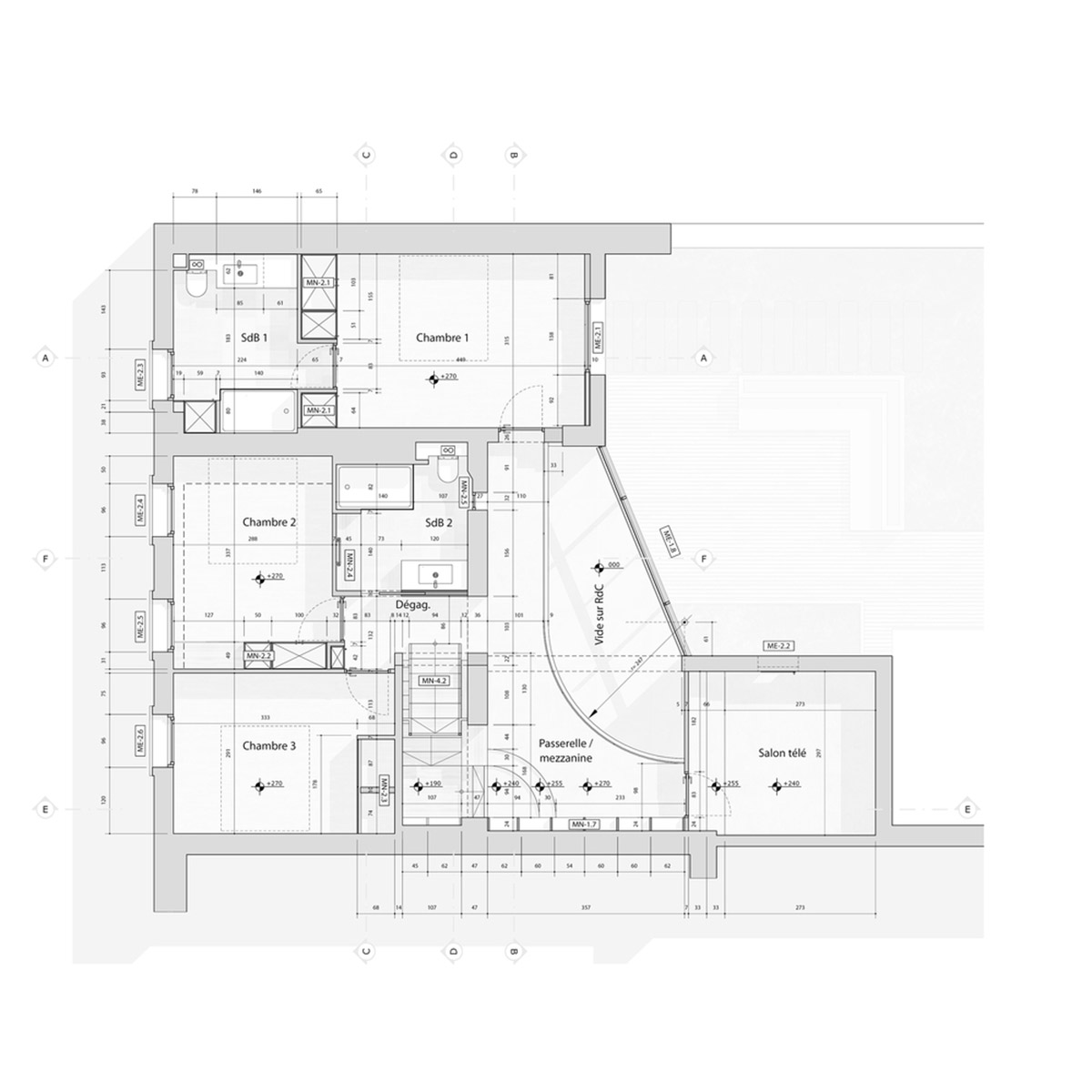 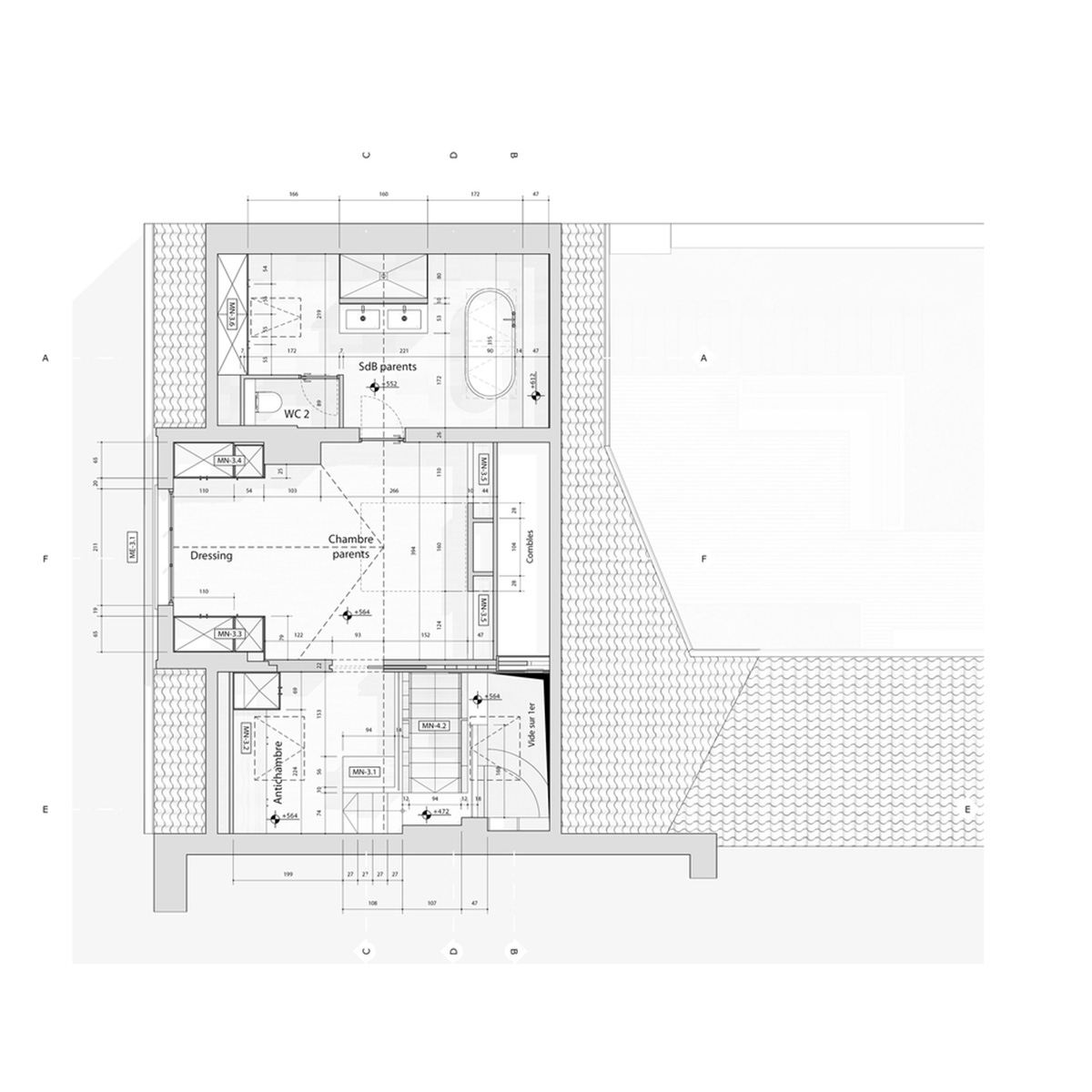