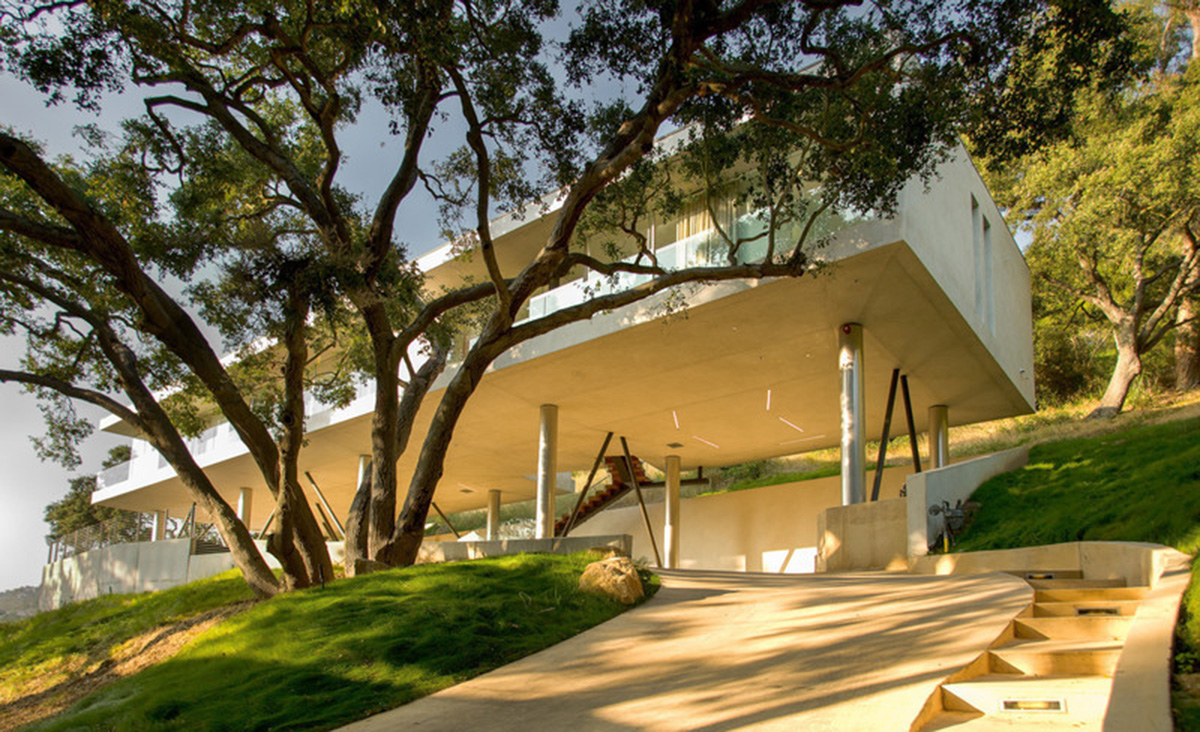 Named Oak Pass Residence Addition, the 1,500-square-foot (139-square-metre) office is added beneath the pad of the zen-like garden, the residence sits atop of the garden and the volume is raised on steel columns that allow free movement underneath.

The office space continues to advance the innovative design solutions employed by the architect Gerhard Heusch, founder of Heusch Inc. in building his 3,500-square-foot (325-square-metre) home, completed in 2006 on an empty parcel of abundantly natural land overlooking Benedict Canyon. 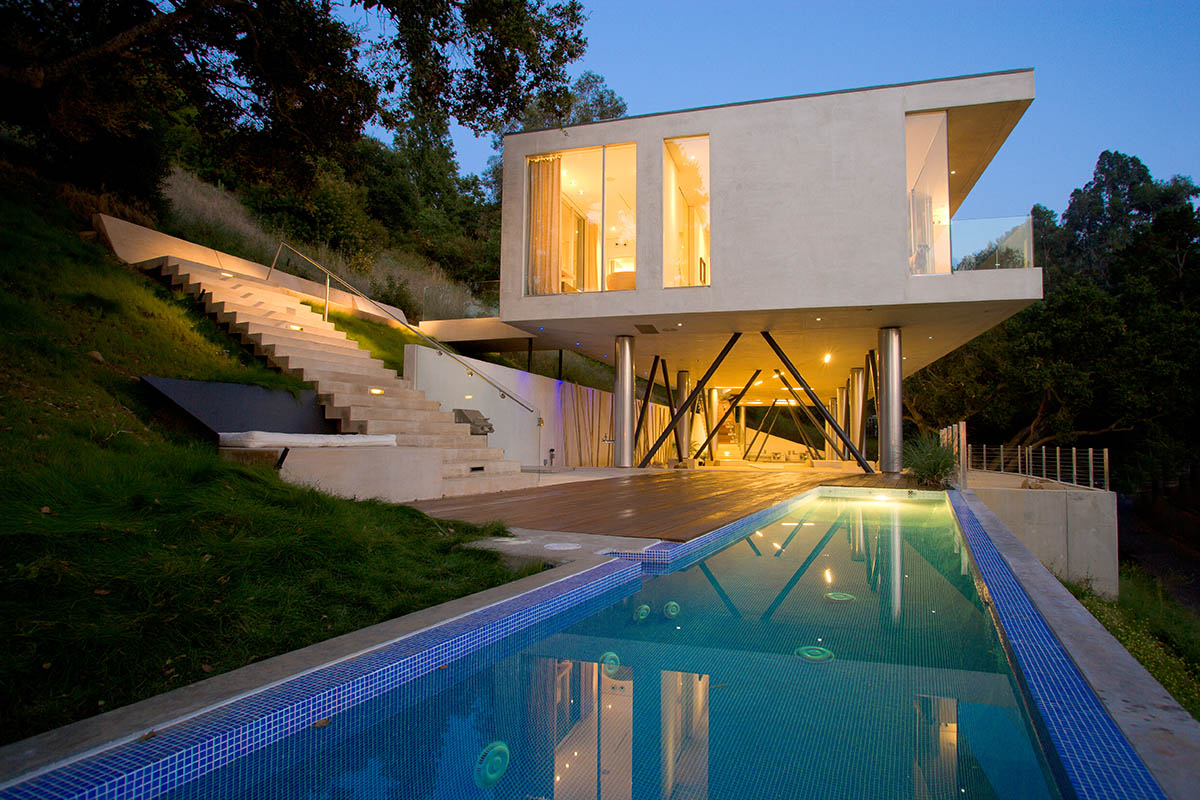 Heusch’s architectural concept began to unfold in 2000 when he purchased an acre of breathtaking land that he was determined to blend his design into. With a landscaped hillside to the east and panoramic views of Benedict canyon to the west, he embarked on a project to balance his new residence with nature.

The plan he put forward was to build 10 steel columns to support an elevated house, which he successfully argued would mitigate any landslide threats to the built environment. 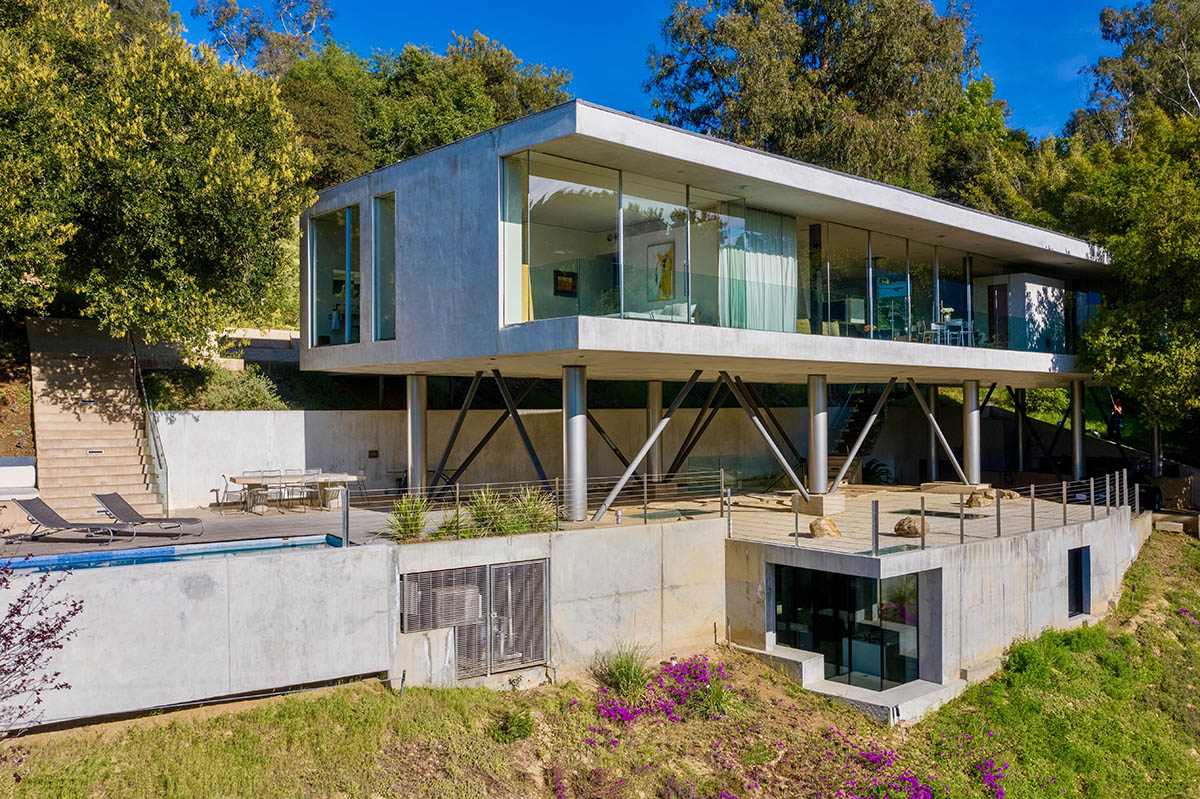 The innovative solution allowed him to forgo the 15-foot (4,57-metre) setback by building a much smaller, less obtrusive retaining wall into a natural cut in the property. The design plan provided a platform that would enable him to build his spacious, modernist home into the treeline of the embracing hillside.

"A setback essentially disrupts the idea of harmonizing the environment," said Heusch.

"I didn’t want to build a house that would essentially stand alone as a partition between the hillside and the canyon." 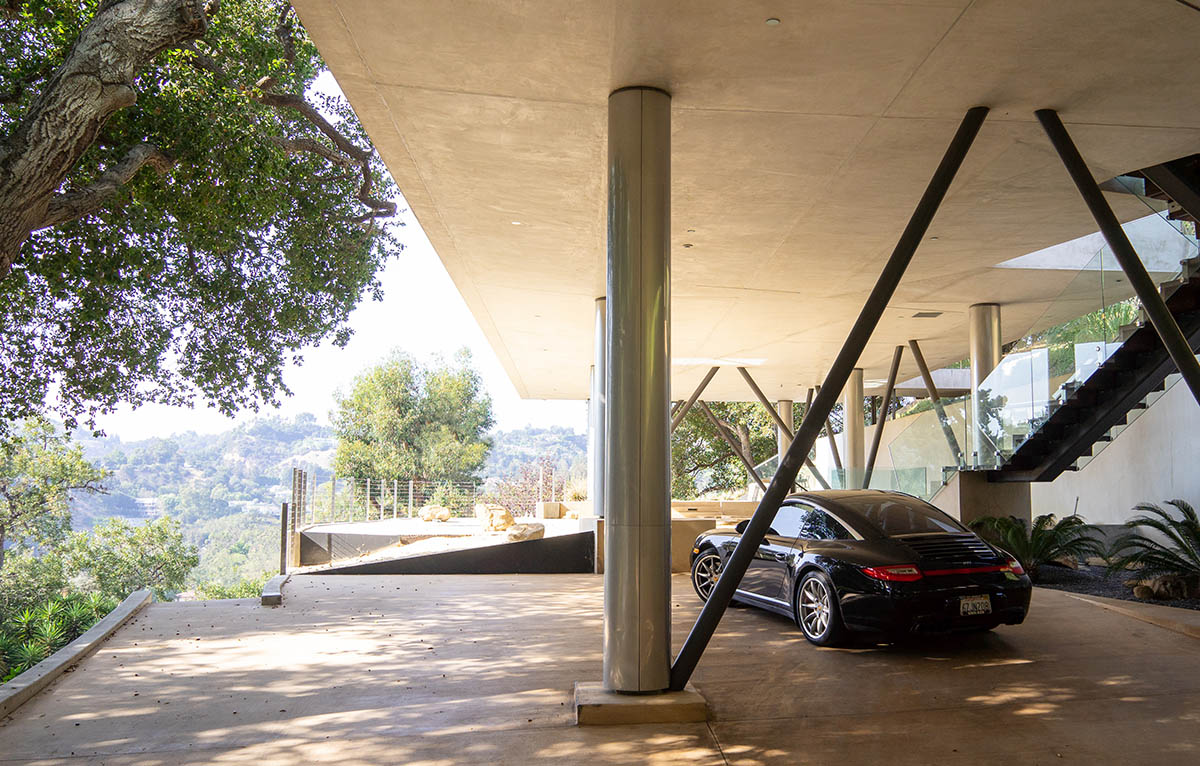 With 10-foot ceilings and floor-to-ceiling windows, Heusch’s open floorplan ensures that every room of the seamlessly flowing living space has a spectacular view. To further ensure unobstructed flow, Heusch embedded much of the house’s infrastructure, including roof drainage, plumbing, and electricity, into the support columns.

As a result, upon entering the front door, unobstructed views carry through to a glass wall at the rear of the house, revealing a beautiful oak tree backdrop that emphasizes the seamless connection between the natural surroundings and his built environment. 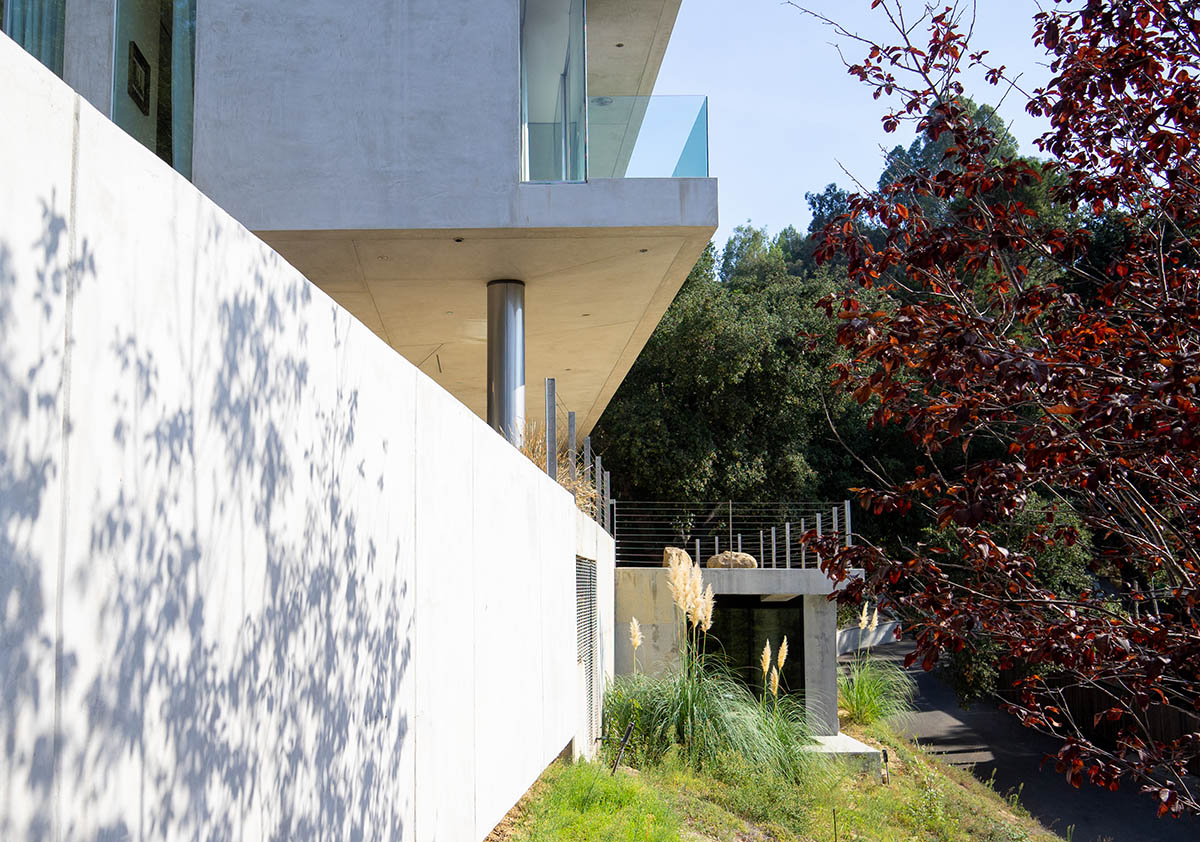 The interior of the single-level layout is framed by natural stucco walls and Brazilian walnut floors, with custom-designed furniture, cabinets, fittings, and profiles that further embody Heusch’s minimalist vision. There are three bedrooms, including two guest bedrooms that can be linked together courtesy of a sliding wall. Spanish marble anoints the guest bathrooms, while the master bathroom is accented by Portuguese limestone, including a soaking tub that was hand-carved from a single block.

In order to accommodate an additional regulation requiring a second exit, based on the home’s total floor space, Heusch made another innovative architectural tweak. To meet the requirement, he built a small bridge and staircase exiting the elevated master bedroom, which leads down from the hillside to a pool area and adjacent Zen-style garden. 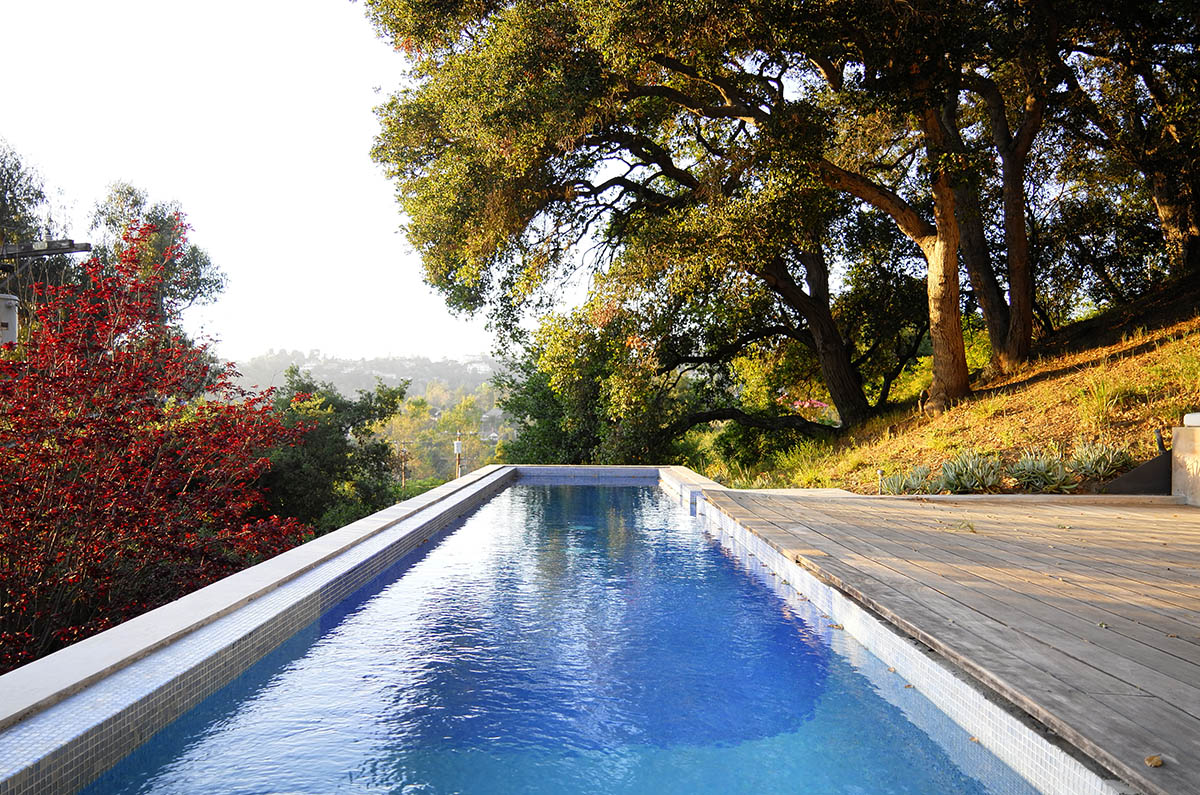 Heusch decided that he would build his office beneath the pad of the Zen-like garden, a process which began with the excavation of 80 truckloads of dirt in front of the retaining wall. The adjacent pool area was left completely intact, and he carefully avoided disturbances to the main support columns of the house.

However, in the end, one of the existing support columns was incorporated. With the help of a local sub-contractor, Heusch erected the walls of the concrete structure, welding custom fixtures to the rebar reinforcements before pouring the cement in order to accommodate electrical and other wiring needs as he had done for the house. 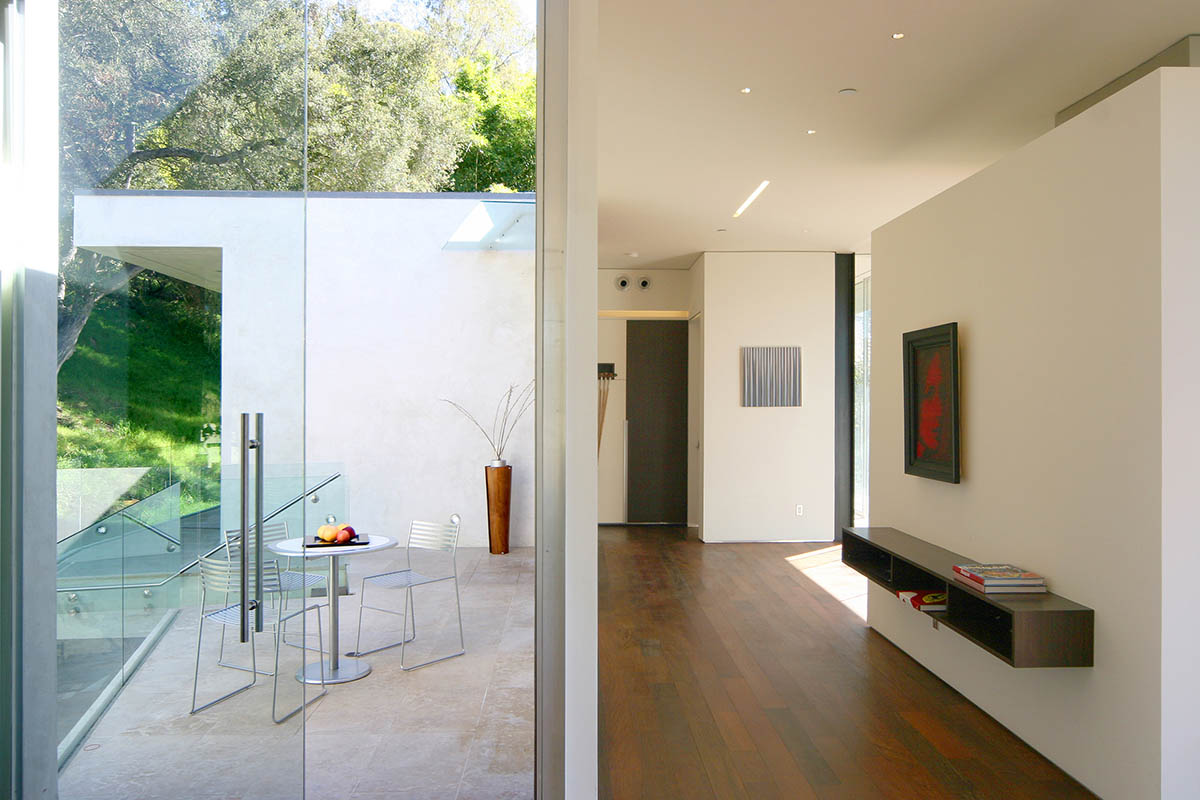 He cut a window out of the existing retaining wall, as well as an entrance in a new concrete wall. To descend from the main entrance into the office space, he built a staircase, with its cantilevered treads also welded to the rebar. Once the structure was built, Heusch sealed the space with a concrete ceiling. He then reintroduced the sand and pavers of the former garden space above and added strategically-placed boulders extracted from the dig, as well as two panels of new glass flooring.

Heusch had achieved his goal of creating 1,500 sq. ft. of underground, yet naturally-lit, office space. 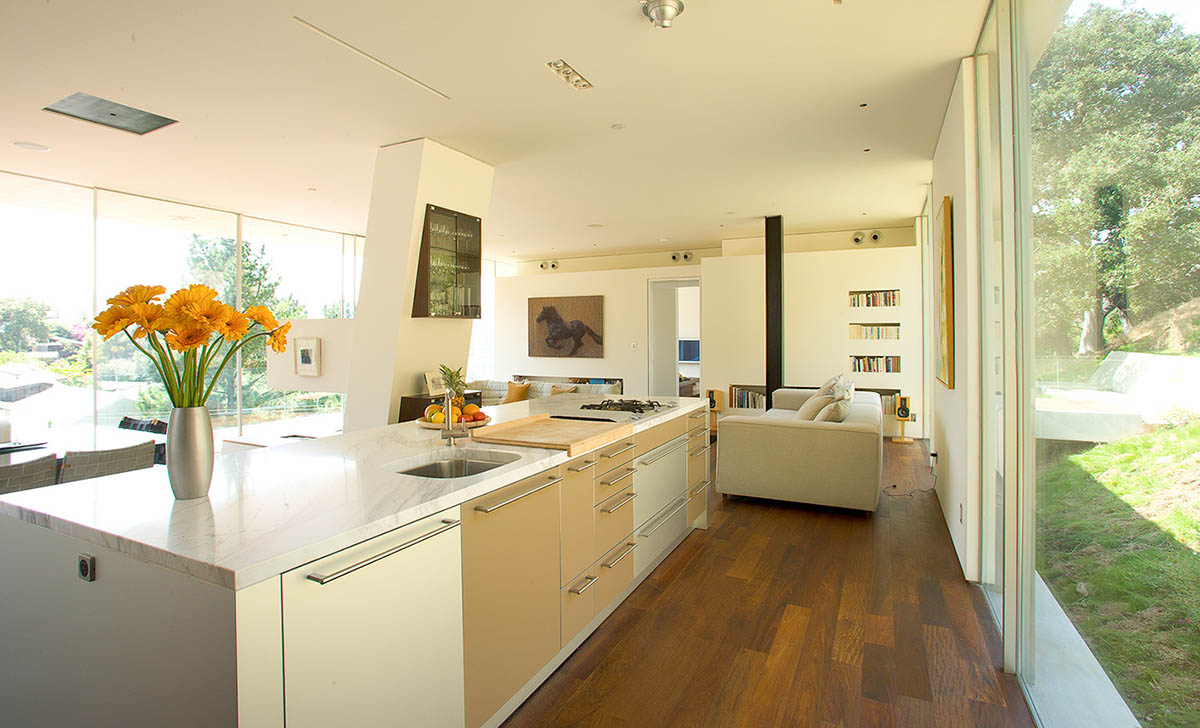 "I am pleased to have been able to replicate the process of harmonizing the built environment with its natural surroundings," added Heusch. "I now have the most serene office commute that I could have ever imagined."

"There is a definite professional advantage to living within the built environment that I have created," added Heusch. "The success of the project, and the natural beauty of my surroundings, inspire new ideas every day for advancing the integration of architectural design into the natural environment." 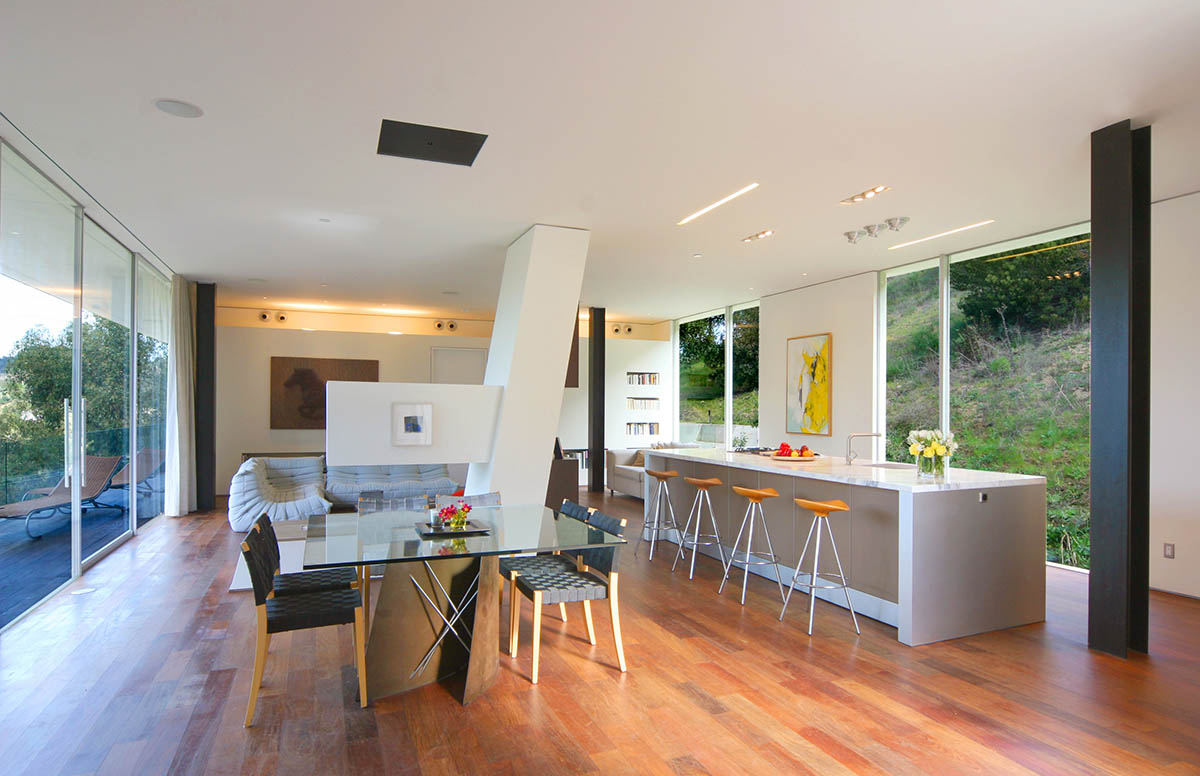 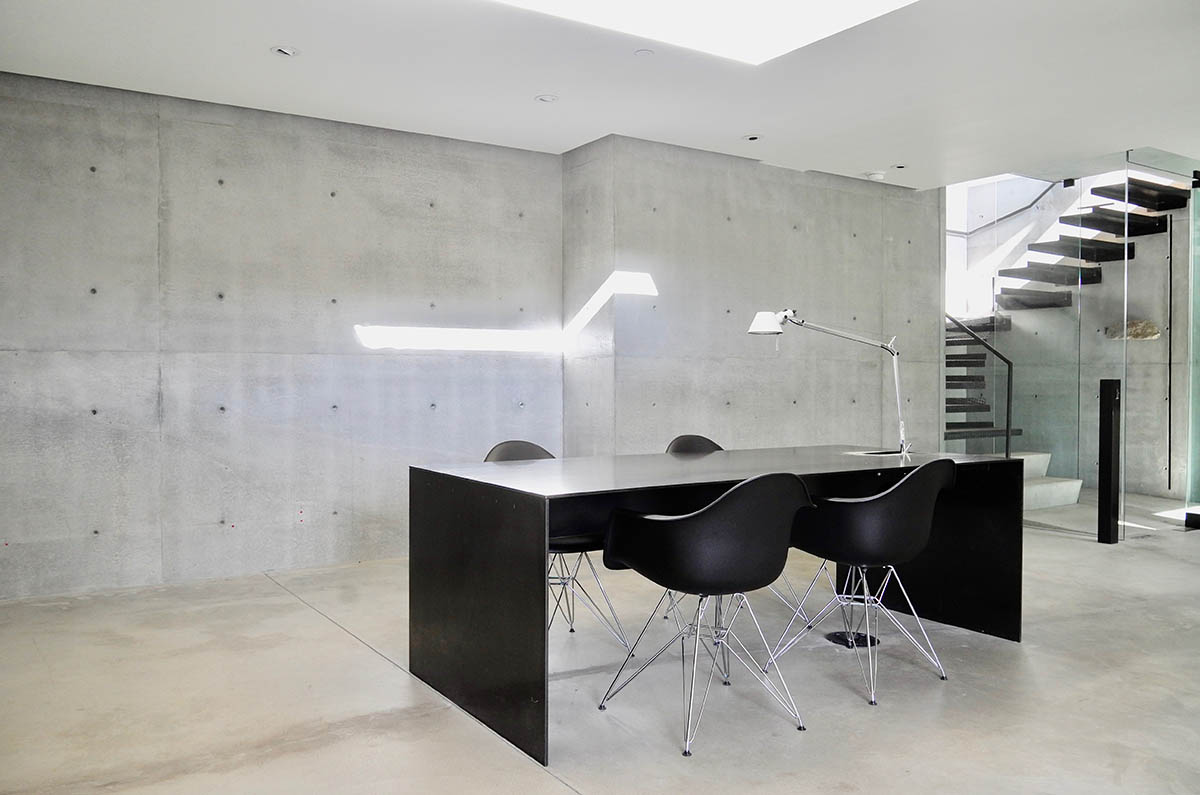 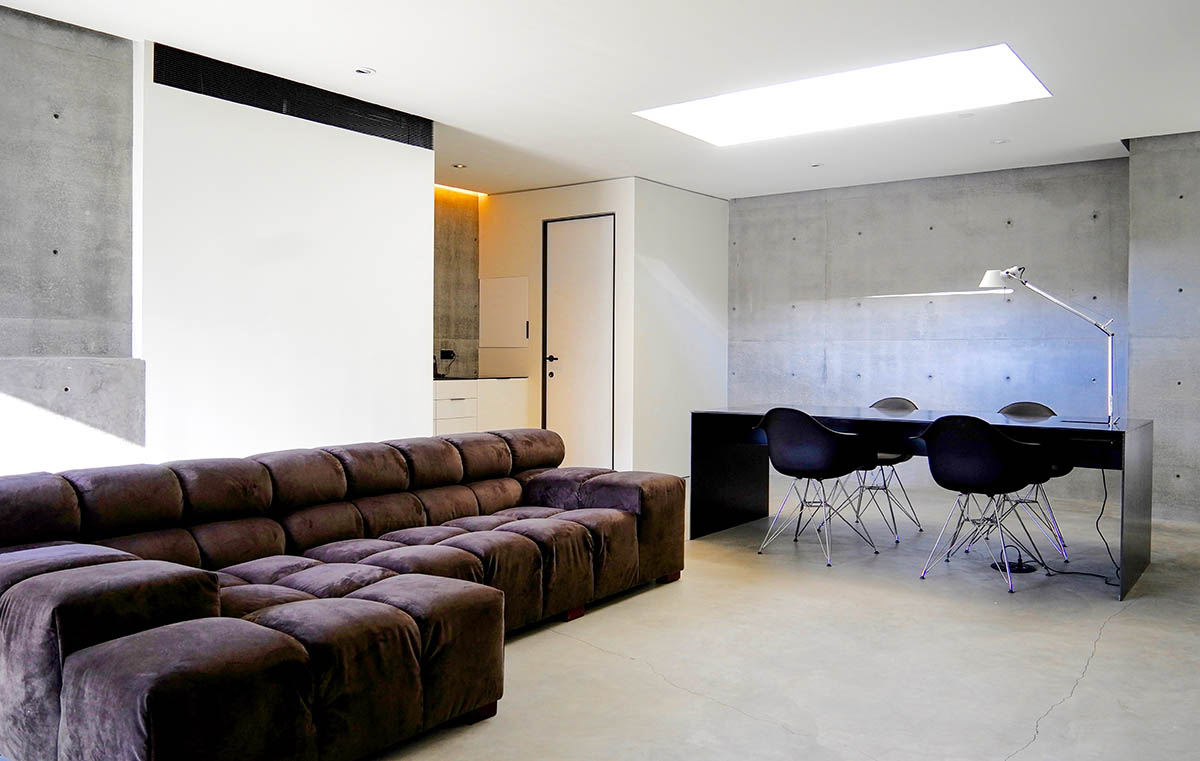 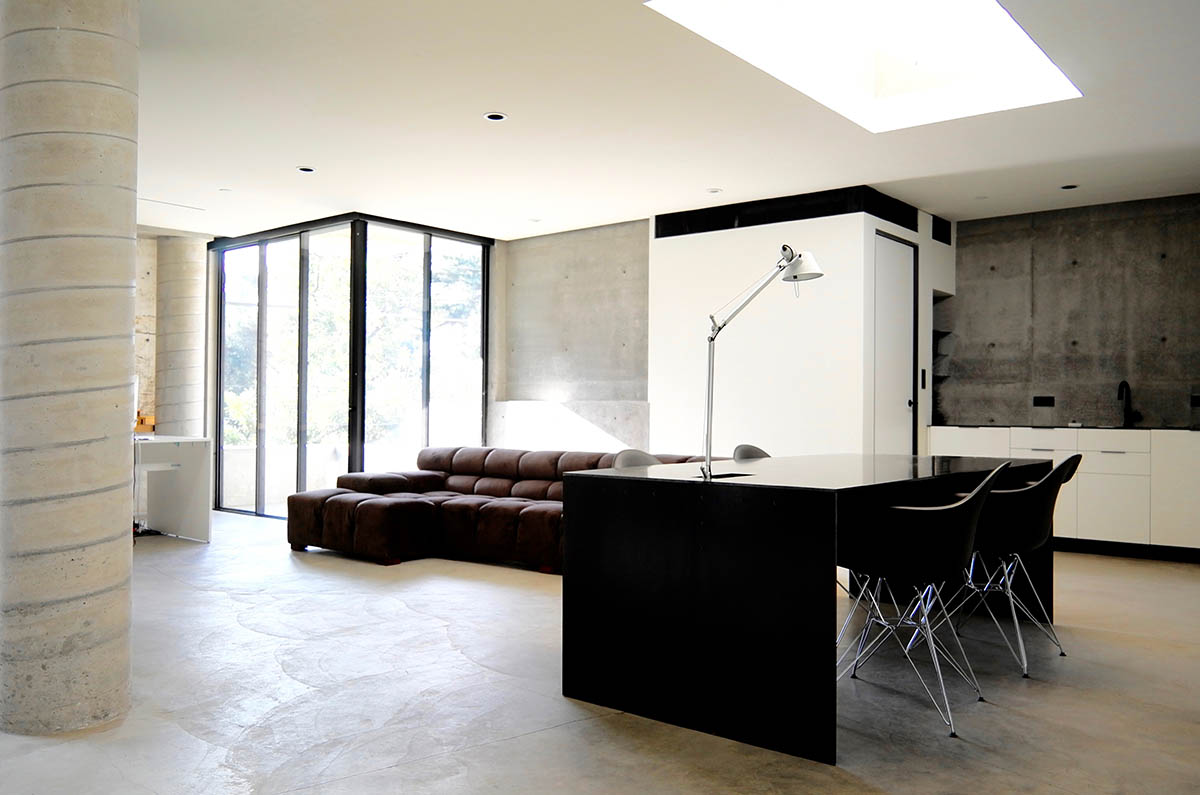 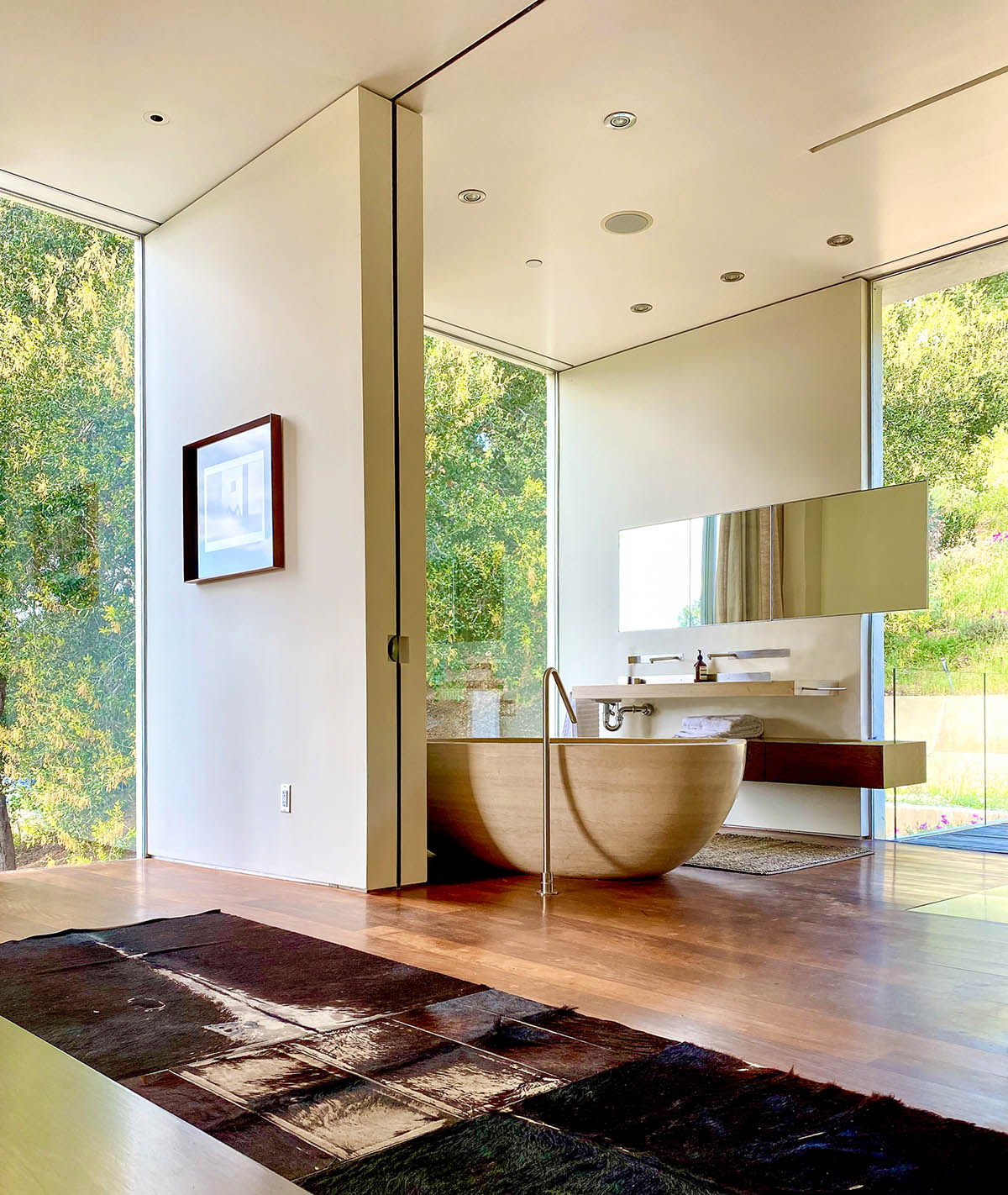