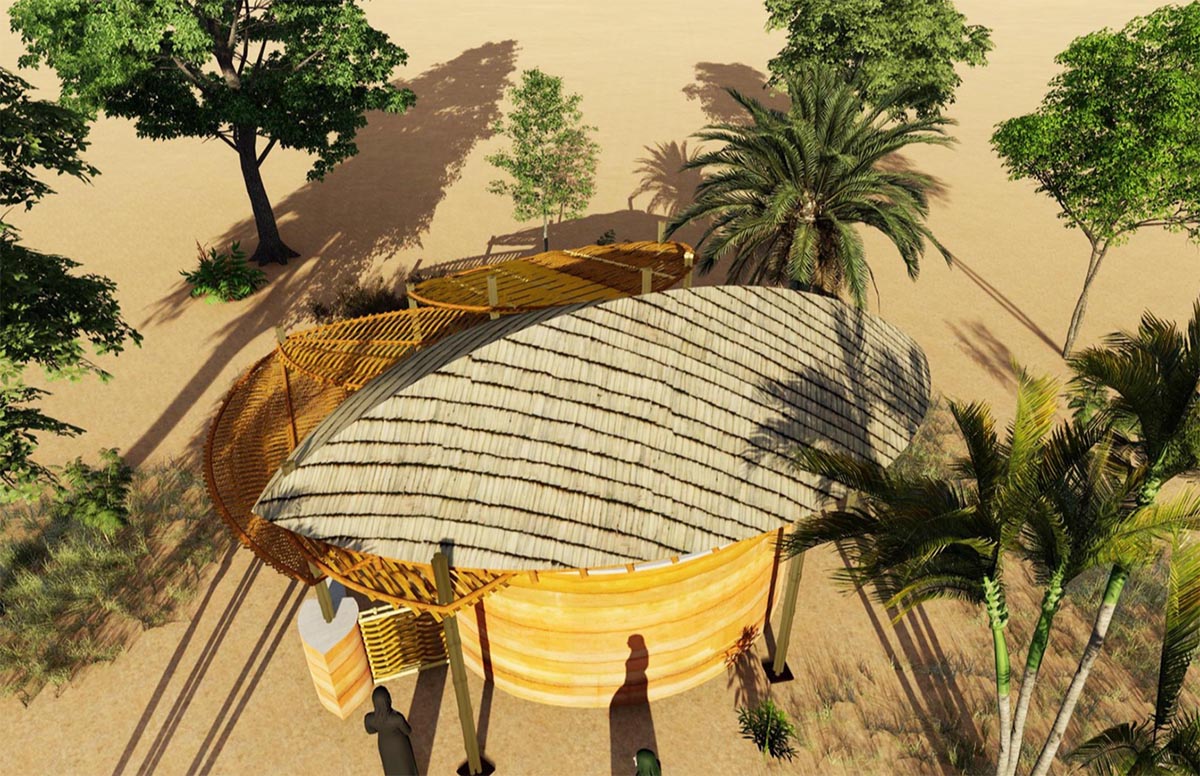 The Institute of Architects Pakistan said "this competition received very interesting entries from Architects and students from all over Pakistan and recently an online design jury was held."

See the winning projects with their short project descriptions below: 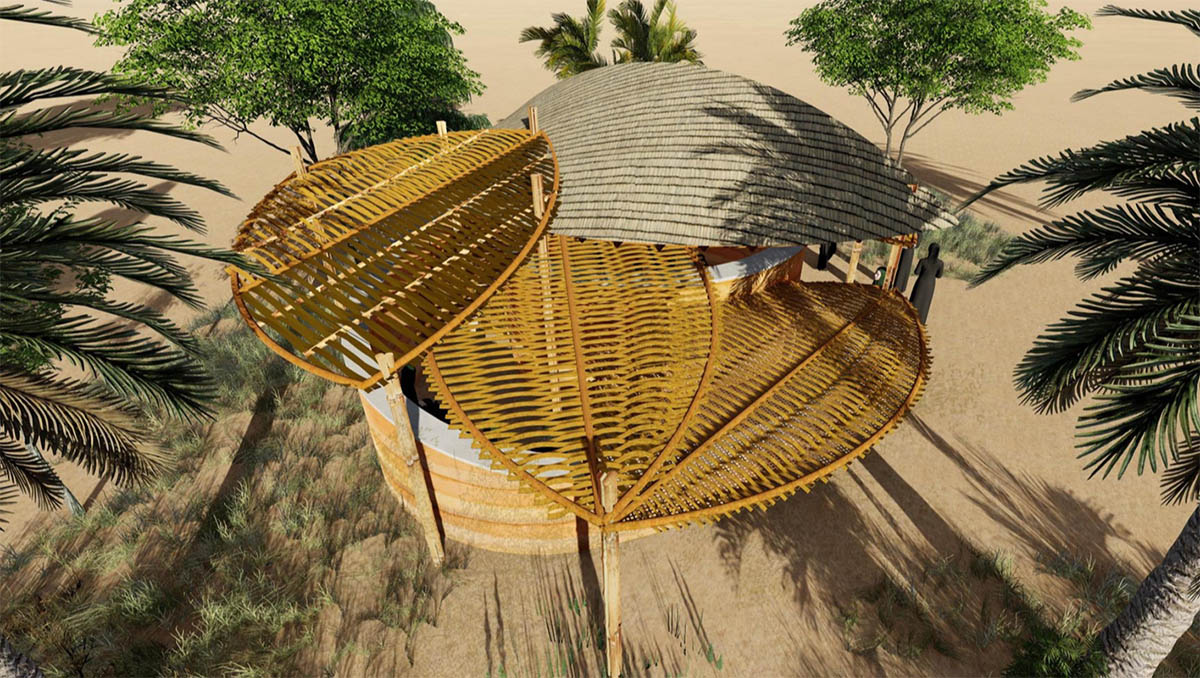 Text from the architect: There is a great need for a help centre for women in the rural areas, concerning reproductive health combined with advising women in health issues during pregnancy. Anything more serious than health and diet advice given by health workers at the centre, will be referred to a health clinic or hospital. The location of this centre is just outside the village of Ishaque Jokio, population 1000 persons, half being women of various ages.

The health workers will encourage women from other villages to register here. Once registered each woman will be advised according to her needs and circumstances. Regular attendance being encouraged. 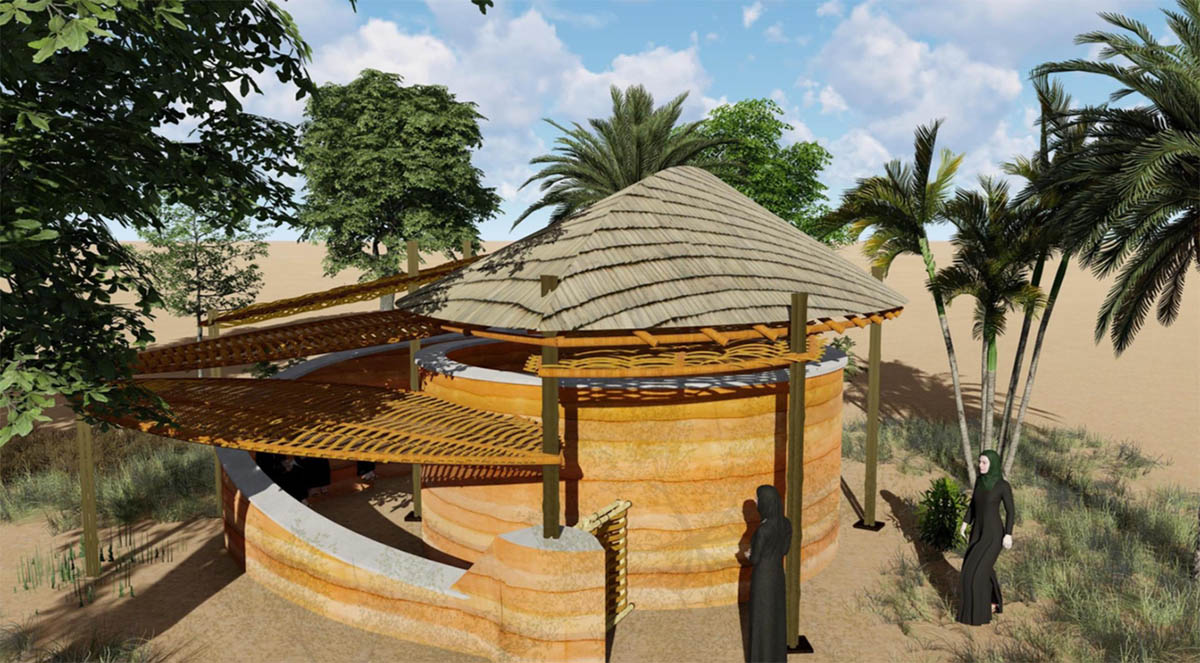 The centre is made of rammed earth walls and a bamboo frame structure which holds up the main roof finish made of bamboo shingles. There are other “leaf” like roof panels to provide some shade and an “aesthetic” relief to the full form of the structure.

The bamboo structure is to be treated with Borax liquid to prevent termite attack. These columns are placed inside discarded oil tins filled with compressed earth. The outer surface of the oil tin prevents termites from entering from the submerged bamboo post. 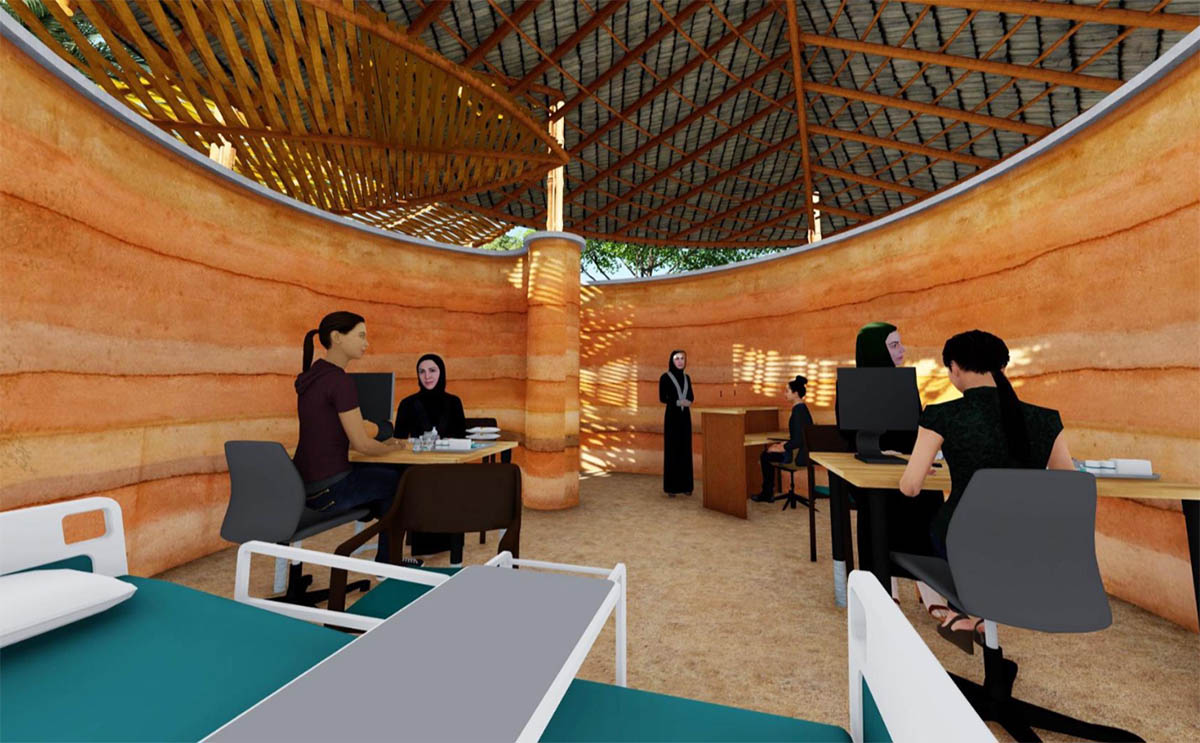 The “leaf” like ceiling frames are interwoven with split bamboo 1-inch strips where there is no need for any fixing methods. The friction created by the weave is adequate to hold these “leaves” together.

The main bamboo framing is fixed by using dowels and bound together using “baan” system like when furniture is made using a “baan” weave. There are no nails or bolts used in this structure. 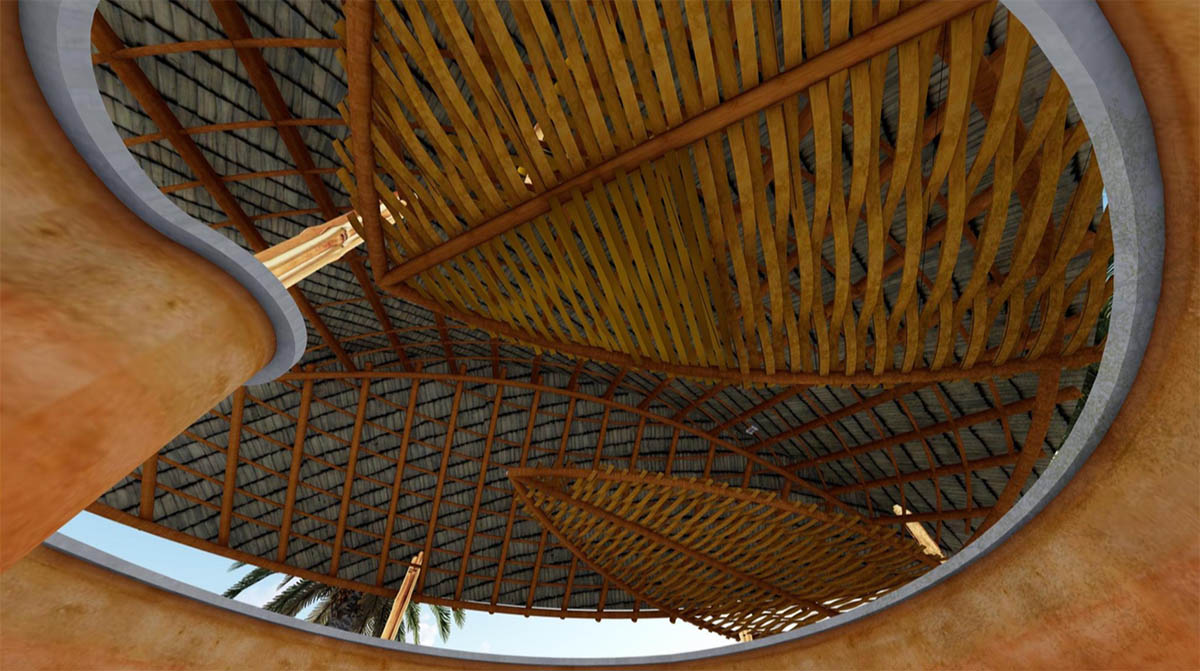 The flooring, at 18 inches higher than the outside ground level, is an earth system used throughout the world. The technique is easy and laid properly provides sufficient water proofing. The final surface is waxed using hot linseed oil. The color applied will be warm terra cotta to blend in with the various layers of the earth colors of the rammed earth walls. It is imperative that the earth have the right mixture of silt, gravel, sand and clay. The walls are build using a timber/plywood formwork and the earth rammed in layers of 18 inches at a time. Leaving 3 days for the wall to rest before the next layer. Color variation come from the soil itself chosen from different locations. 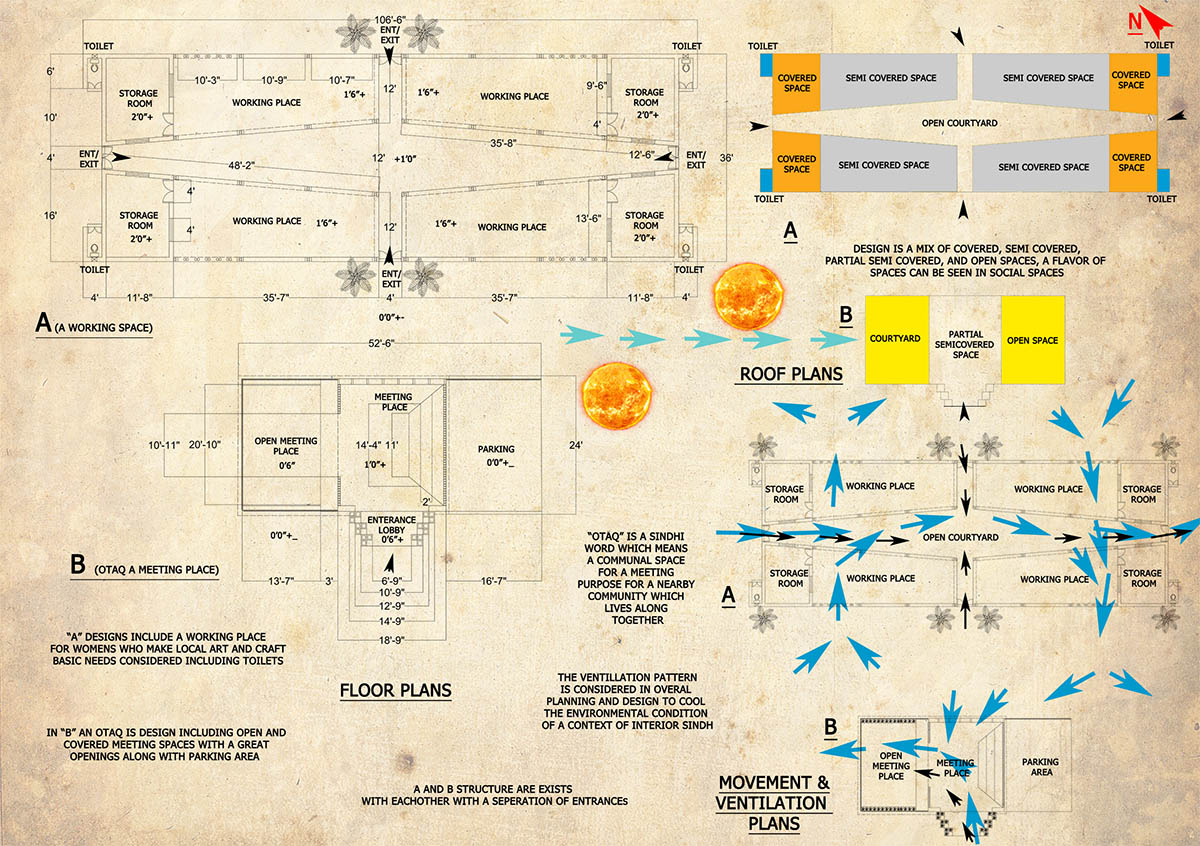 2nd prize: A Design of Otaq (A Meeting Place) and Working Area For Making Handicrafts by Ar. Faisal Rehman Sial

Text from the architect. The Culture of Sindh has its roots in the Indus Valley Civilization. Sindh has been shaped by the largely desert region, the natural resources it had available, and continuous foreign influence. The Indus River that passes through the land, and the Arabian Sea (that defines its borders) also supported the seafaring traditions among the local people. The local climate also reflects why the Sindhis have the language, folklore, traditions, customs and lifestyle that are so different from the neighboring regions.

The art and craft of Sindh is famous in region. The most famous handicrafts include “rally or rilli, sindhi taanka and ajrak” these handicrafts specially made by women in their homes, there is no proper place to gather in one place and make these crafts especially in rural areas. We all know that in the rural areas of Pakistan people lives in a community from ten to more than fifty houses side by side. The design criteria is based on the women or even men gathers on one place along with basic needs like toilet and storage room and make these crafts more peacefully. 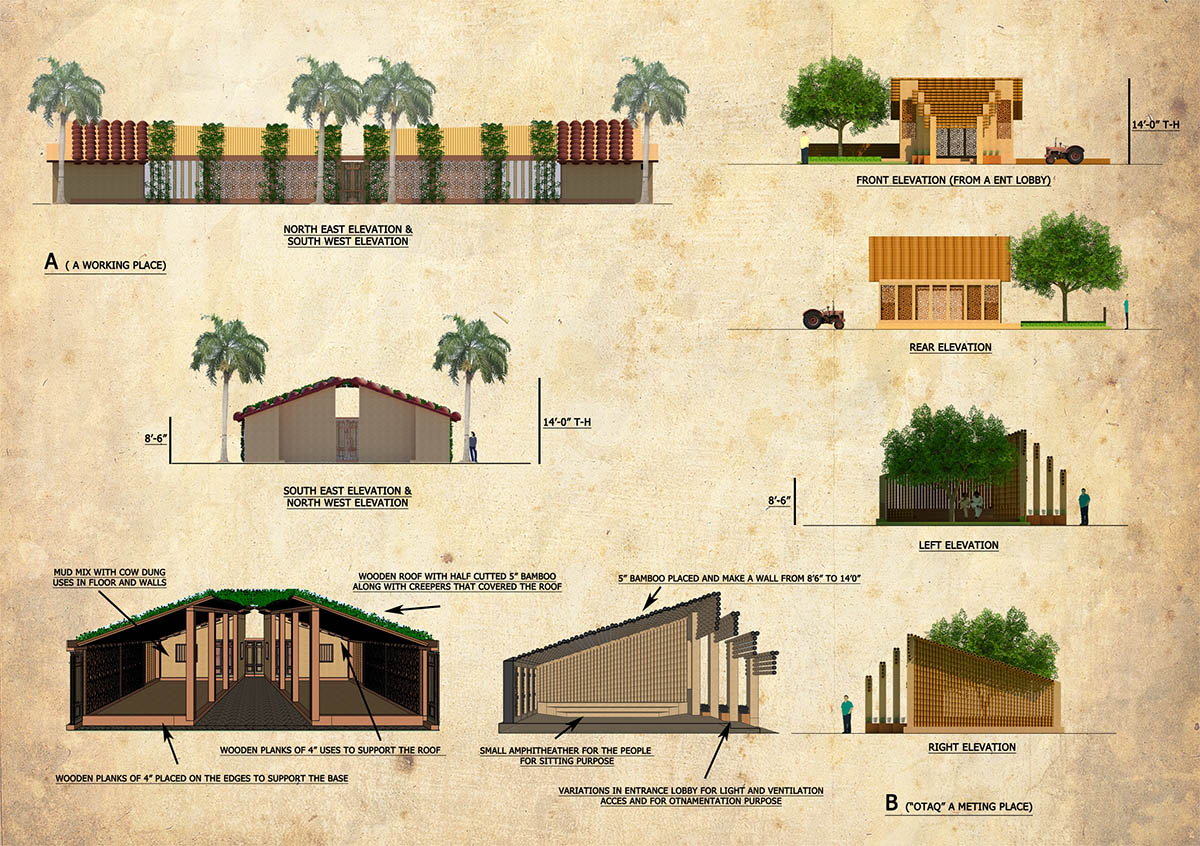 Second “otaq” is a sindhi word which means a communal space or meeting place along with basic design facilities like courtyard, parking etc. The design accommodate both functions i.e. working place and meeting place because both is helpful for community of rural pockets. My methodology is based on a concept which I taken “simple Steady and strong” social spaces [a design of otaq (a meeting place) and working area for making handicrafts] also it derived from the research of vernacular architecture because most of the material in vernacular is zero carbon, so I choose some local natural material and converted into a design meanwhile I work on how these areas work in community like “otaq” which is traditionally a part of the architecture of rural Sindh. It consist of 2 to 6 rooms with open courtyard along with parking areas cover with vegetation and surrounding house. Working on a design techniques of how to cool down the temperature inside. 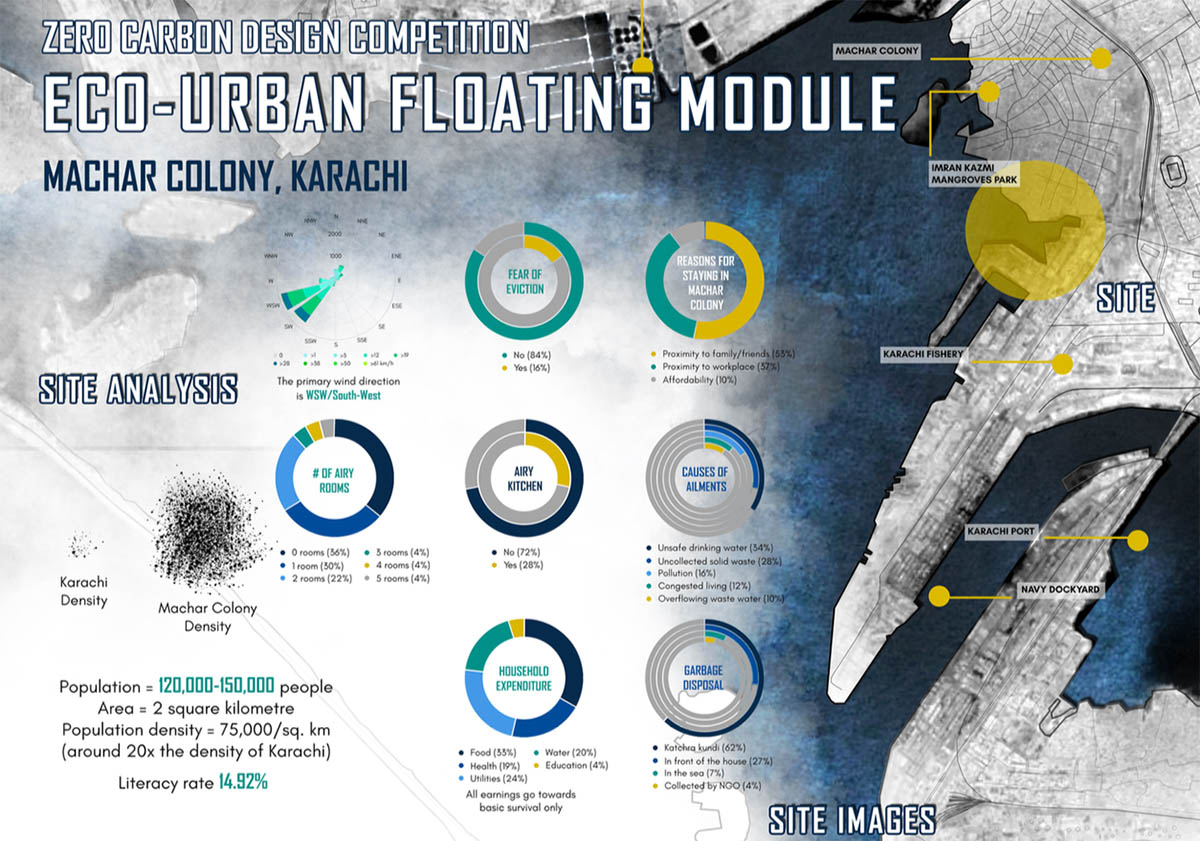 Text from the architects. Slums are a neglected portion of society, people living well below the poverty line, with supply of basic necessities like water, electricity and sanitation often unavailable. Machar Colony is one of the most climate-vulnerable communities of Karachi, with a population of at least 120,000 people. They reclaim land from the sea by cutting down mangrove trees and then dumping debris onto it to make the ground high enough to build on. The cutting down of mangrove forests exacerbates the effects of climate change (especially flooding), which has hugely adverse consequences for the residents of Machar Colony. 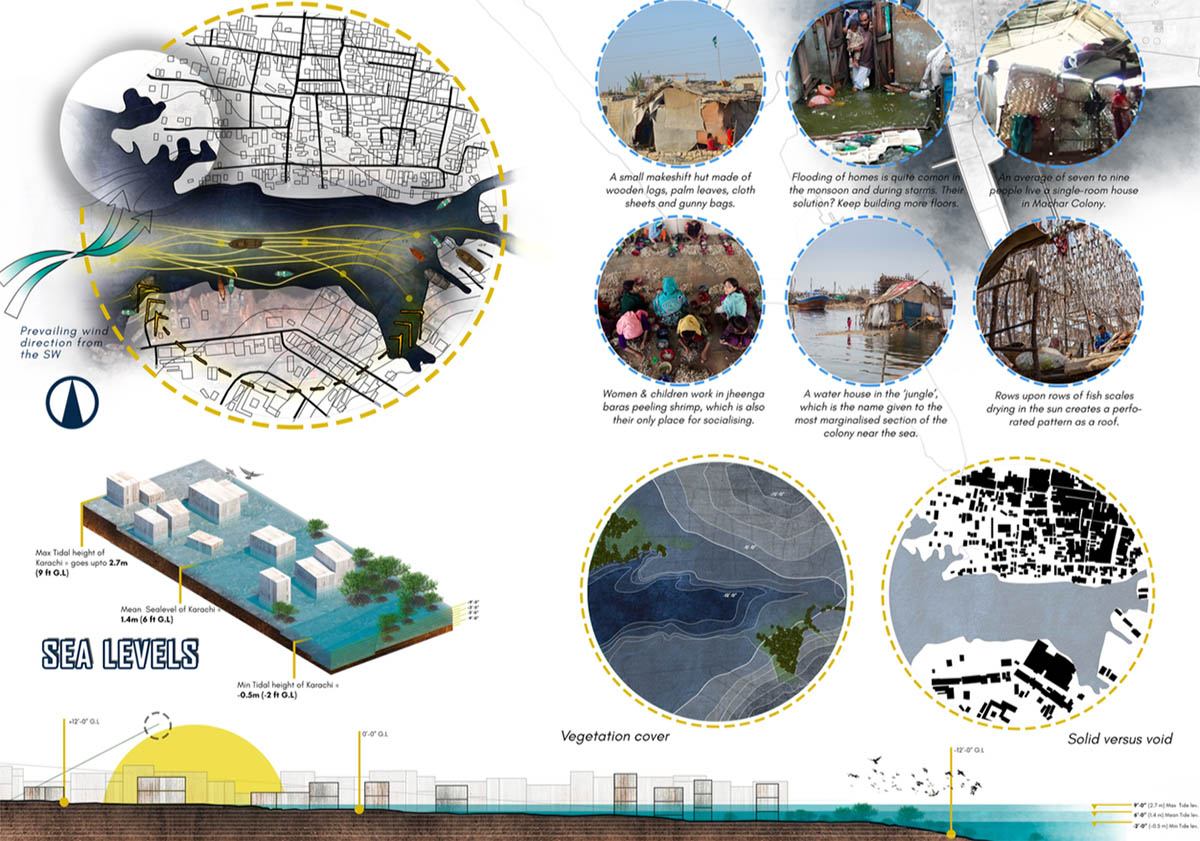 The slum’s residents are migrants. There are divisions within the colony based on origins or professions and this fragmentation leads to a lack of community spirit. There are no open spaces for children, or places to gather, which is especially a concern for women. Government schools are far away and children are not allowed to go for safety reasons. For almost half the year, fishing is banned, therefore most of the fishermen have to find other sources of income. Most people construct multi storey concrete block houses because they are forced to abandon the ground floor and go to upper floors for refuge when flooded. The unpaved streets and houses are inundated with water every time the tide comes in, taking back garbage and solid waste into the sea, which is the only method of its disposal. Residents are exposed to a large number of waterborne diseases without access to suitable healthcare and bore holes bring up brackish water unfit for drinking. 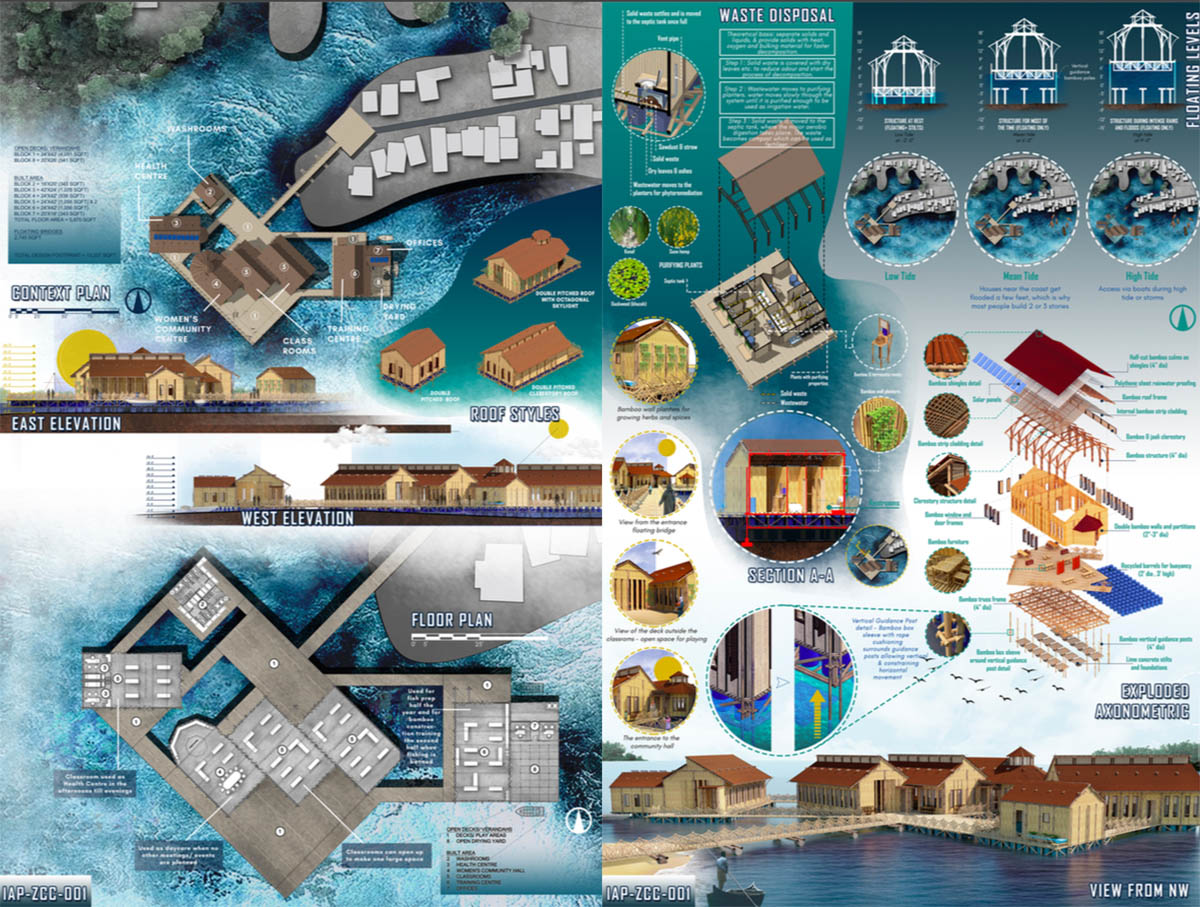 Looking at the needs of the colony, a flexible programme has been generated for the proposal in the form of building clusters and open decks, housing a middle school, a women’s community centre and a men’s work area.

The main construction material is bamboo and recycled plastic water drums. For the problem of rising sea levels and flooding, the solution is to build on water itself. 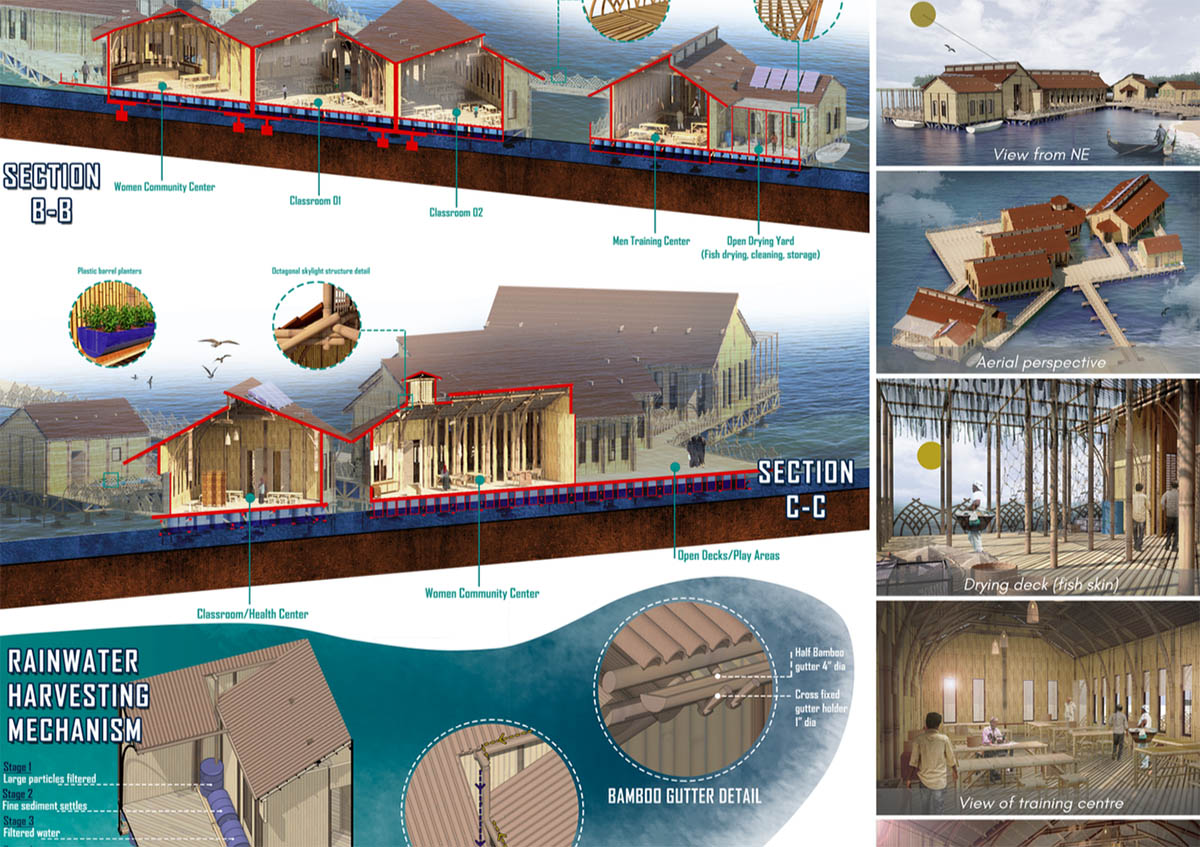 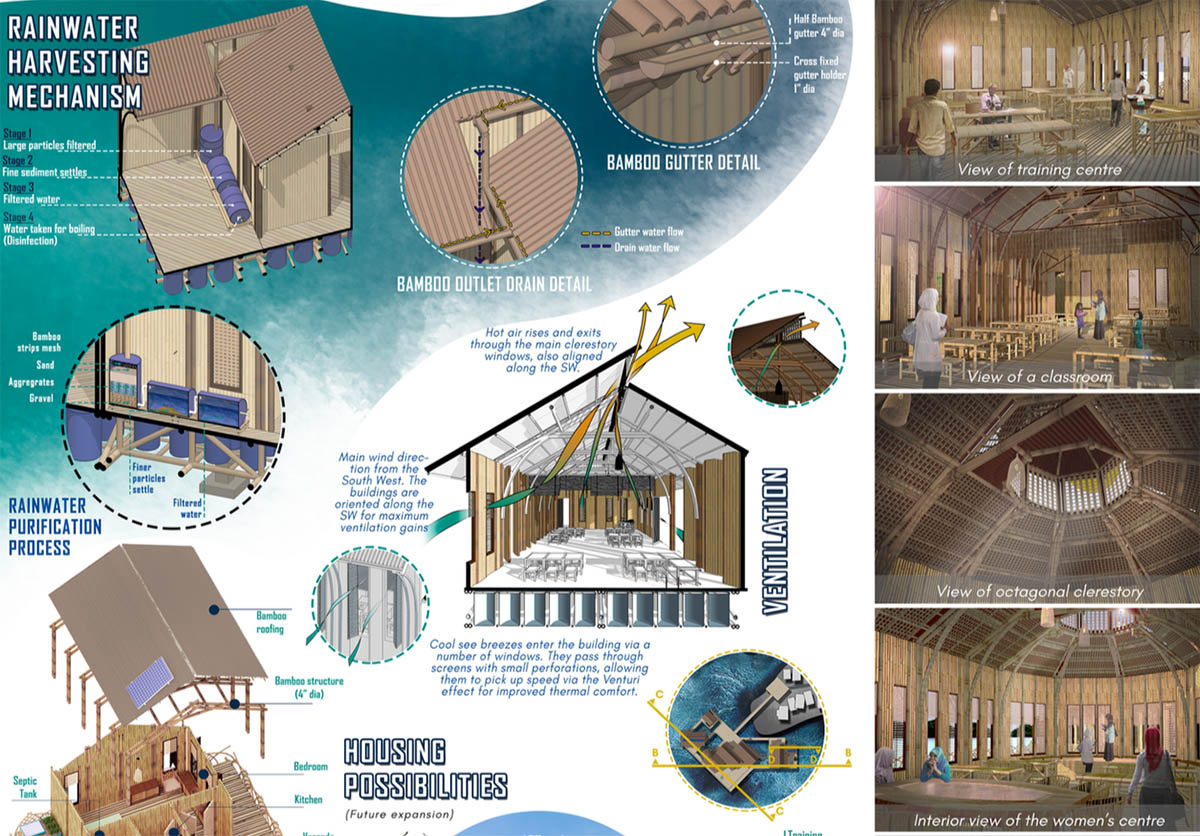 We envision children coming to the school in the fresh morning haze, in bamboo classrooms with cool sea breezes and tall ceilings, where the light falls on the desks in patterns made by the jaalis. The community hall functions as a daycare as well, allowing just a few to take care of the children of many, strengthening the economy by allowing their mothers to work. At their weekly meetings the hall is full of women, light from the octagonal skylight illuminating the stage.

The school building a little distance from the others is used as a health centre in the afternoons leading into the evenings. In the men's area, prepping and drying fish skin is taking place for half the year, and for the rest of the year as a bamboo construction and design training centre.

Each building is going to float independently. Their weight will be half supported by lime concrete stilts and half by the buoyant effects of the recycled water drums lashed to the underside within a bamboo truss frame when water levels are low. When the water levels increase, the structure will lift up and float completely free of the stilts. Horizontal movement will be constrained by a system of vertical guidance poles so the structure cannot move around in the possibly turbulent waters. Structural bamboo used is 4” in diameter, of the native Bambusa bamboo species. The design is based on a modular grid, for which panels are prefabricated and quickly assembled on site.

> via Institute of Architects Pakistan