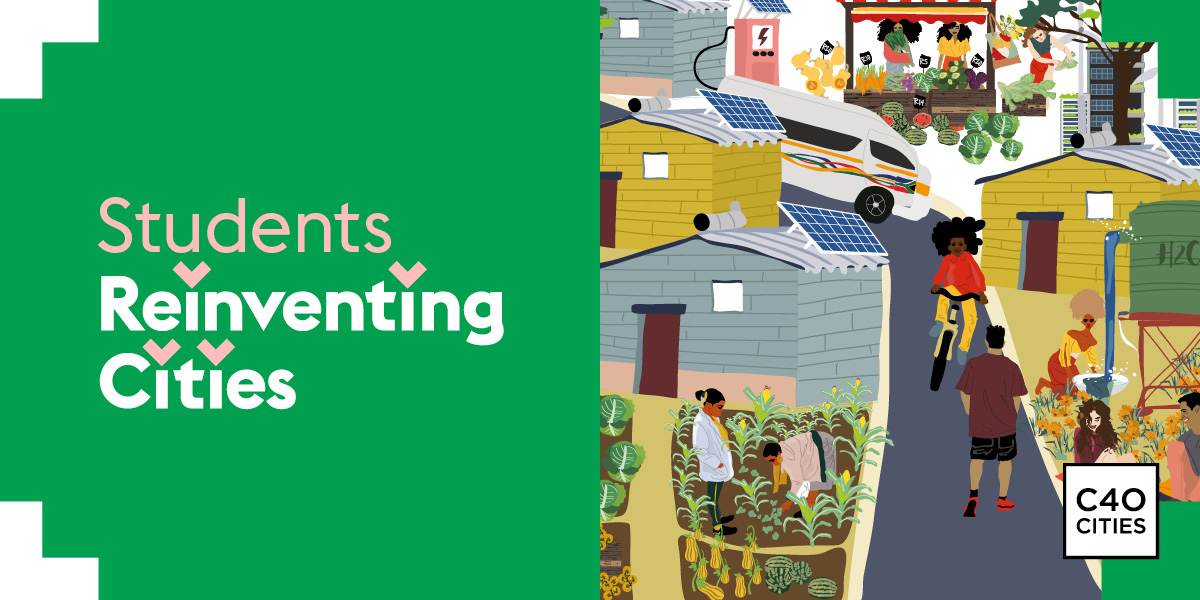 On December 10, 18 global cities including Buenos Aires, Paris, Washington D.C., and Delhi have launched Students Reinventing Cities, a pioneering competition that will enable students and universities from across the globe to share their vision for a green and just reinvention of our cities.

In a first of its kind, the competition is being led by C40 Cities - the global network of cities committed to bold climate action. The C40 Students Reinventing Cities Competition is dedicated to transforming cities in the face of the climate crisis, by driving an active collaboration between cities and academia. The competition will ignite creative, imaginative, and tangible ways to decarbonise city neighbourhoods, as well as to support thriving and resilient life for local communities.

Students entering the competition will be given live projects to work on in cities including; Athens, Auckland, Barcelona, Bogotá, Buenos Aires, Chicago, Dakar, Delhi, Dubai, Madrid, Melbourne, Montréal, Paris, Quezon City, Quito, Reykjavík, Seattle and Washington D.C.  They will submit their entries designed specifically for the urban area in their chosen city - to help change the way we live in cities for the benefit of our wellbeing and of the climate.

The winning projects will be celebrated in a global communication campaign and winning students will be invited to present their projects to business leaders, city officials and leading climate organisations.

C40 Cities is calling on multi-disciplinary teams formed by students in urbanism, architecture, and environment as well as in business, real estate and engineering. The students will be asked to share and celebrate innovative solutions to environmental and societal challenges, considering models such as the 15 Minute City and 20 Minute Neighbourhood, increasingly adopted as valuable urban planning principles.

The competition is being supported by a collective of academic leaders from across the globe, a number of whom have been instrumental in drawing up the Academic Manifesto for A Green And Just Future.  The Manifesto calls for academic institutions to step up in the fight against climate change and to cooperate with cities to take part in the campaign for a Global Green New Deal.

Across the globe, COVID-19 has raised awareness of, and indeed transformed the way we work, travel and live day-to-day. By doing so, it has also urged us to accelerate actions against climate change.

Horacio Rodríguez Larreta, Mayor of Buenos Aires and C40 Vice-Chair leading on Urban Planning, explains; “Many young people are inspiring the world with their climate mobilisation – we can see they are ready to contribute solutions, and this competition will give them a chance to share their ideas, creativity and passion for making change. We’re inviting students and academia to reimagine a series of large urban sites that cities participating in the competition would like to revitalise. As we fight with increasing urgency for a more sustainable future, we need a unified global response at all levels of society, and we believe that academics and students have a key role to play in this vital revolution towards cities on a more human scale and a greener, fairer and more equal future.”

Martha Thorne, Dean of IE School of Architecture and Design at IE University, Madrid, and Executive Director of the Pritzker Architecture Prize, said; “As an educational institution we have a responsibility to create and disseminate knowledge, and also to train the leaders of tomorrow who will have to shape a more humane, sustainable world. The future of our civilization rests, in part, on how our cities address the challenges of climate change. C40 supports cities to collaborate effectively, shares knowledge and drives meaningful, measurable and sustainable action on climate change. For this reason, a partnership between education and organisations devoted to the city provide an opportunity to work together for a better future.”

Academia and students interested in entering the competition can find out more at the official website. Deadline for entries is March 2021.

The finalists will then be selected and invited to submit their final proposals by May 2021. A jury from the city and C40 Cities will select a winner for each city site, which will be announced at a ceremony in July 2021.

The C40 Students Reinventing Cities Competition is being supported by funding partners Ikea and the SNF - Stavros Niarchos Foundation.