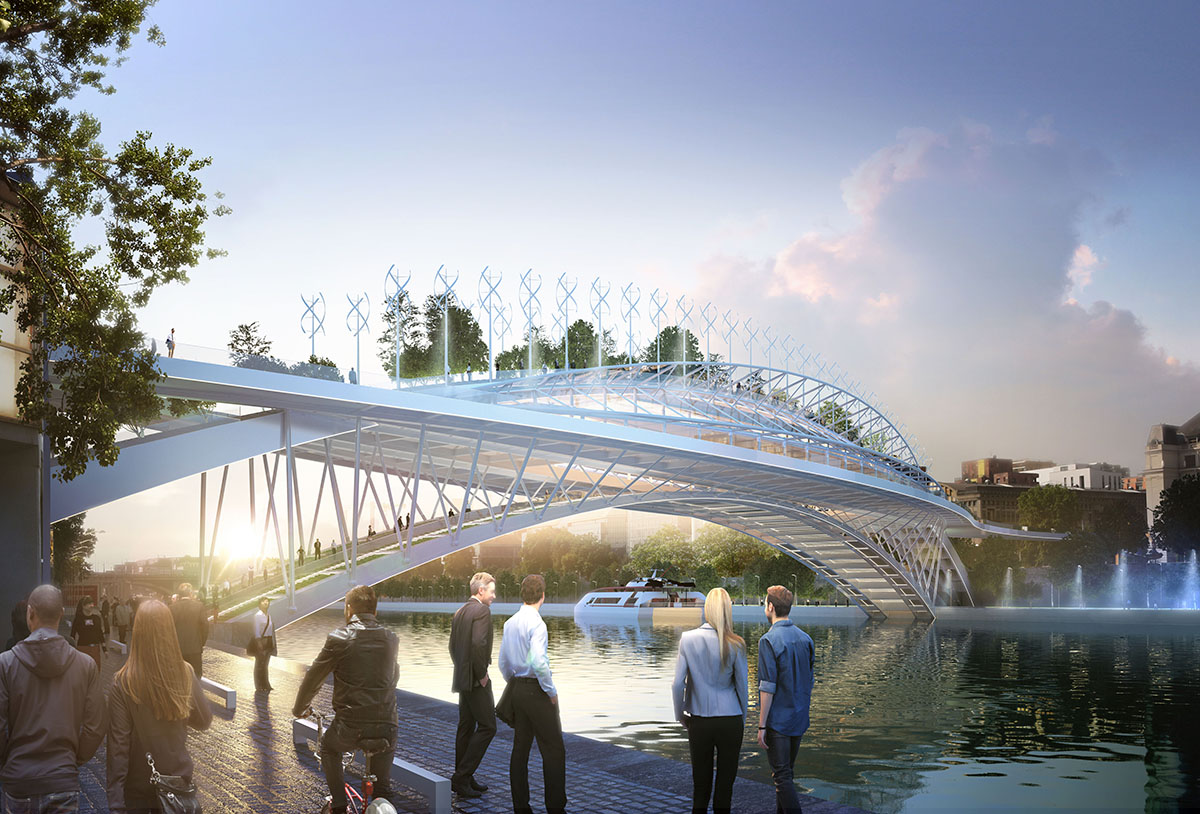 Proposed as an inhabited footbridge, named The Green Line, the bridge repairs the urban divide between Bercy Village and the Masséna district. It creates a winding and furtive plant link between the two banks connecting the 12th and 13th arrondissements in Paris. 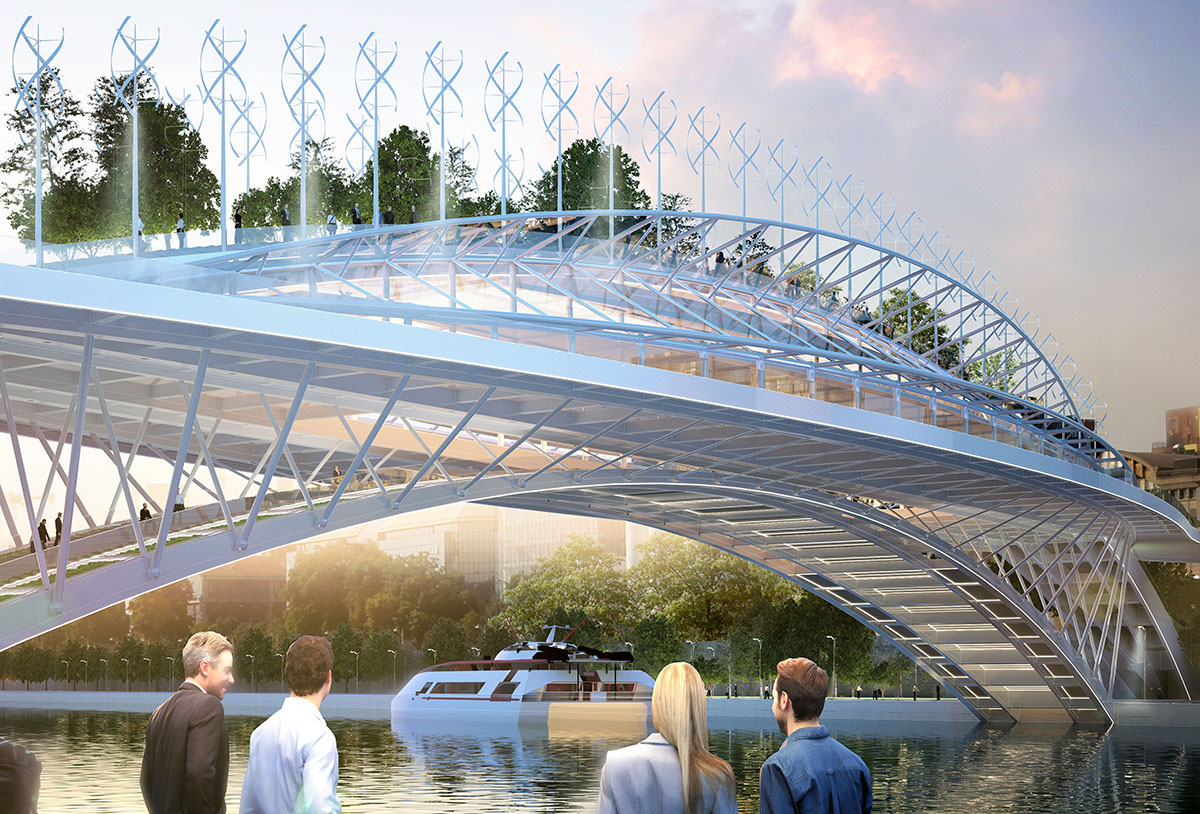 The Green Line is a prototype of edible, resilient, and depolluting architecture. Its architecture generates its own energy from renewable sources, recycles its own waste and wastewater, and optimizes its needs thanks to Information and Communication Technologies. It thus promotes social and cultural innovation through flexible and mutable shared spaces, which adapt to the needs of new generations and to new constantly evolving uses.

The Green Line will streamline and increase the number of walks and crossings, across a functional urban continuum, between two existing urban lungs: the Parc de Bercy, on the right bank, and the Jardins Abbé-Pierre - Grands-Moulins, on the left bank. 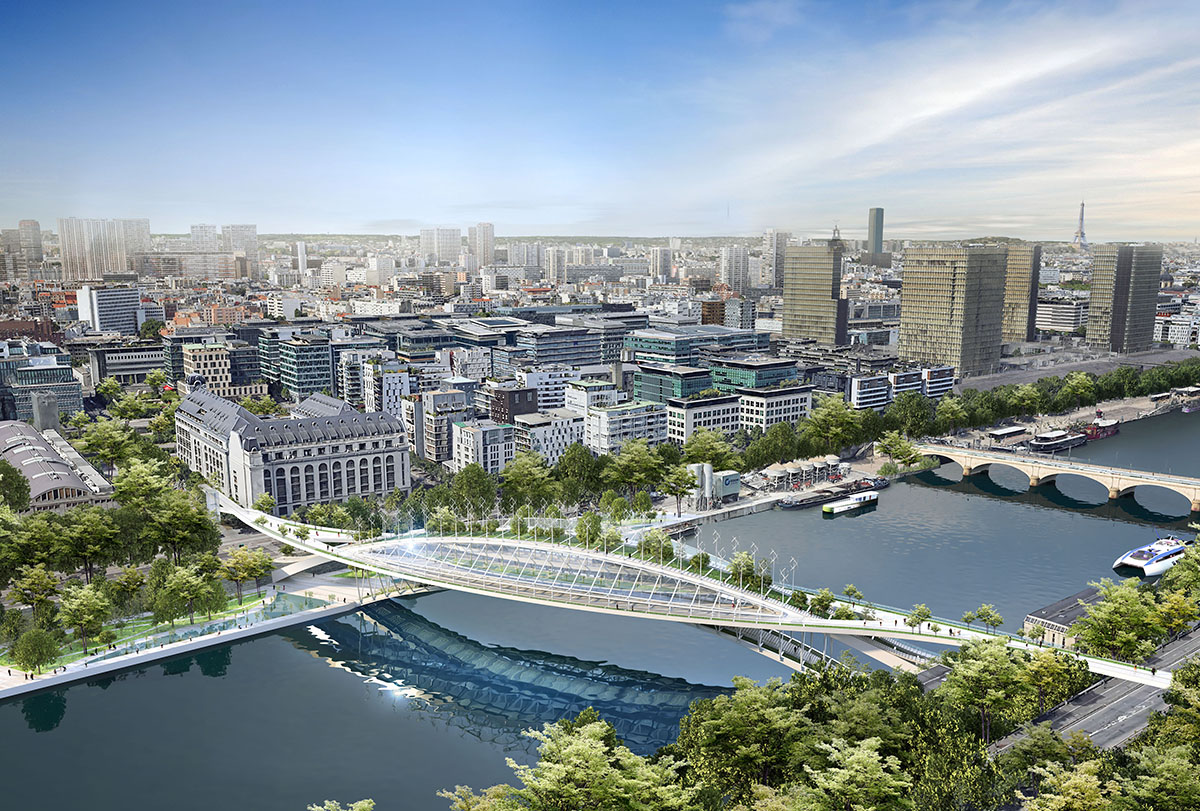 Riding on the Foodscaping wave, The Green Line is designed as a truly edible landscape dedicated to "Parisculteurs" (Paris farmers). It aims to make citizens aware of eco-gastronomy and alternative consumption.

Its panoramic rooftop and horticultural greenhouses host 3,500 square meters of vegetable gardens and orchards under the Parisian sky. 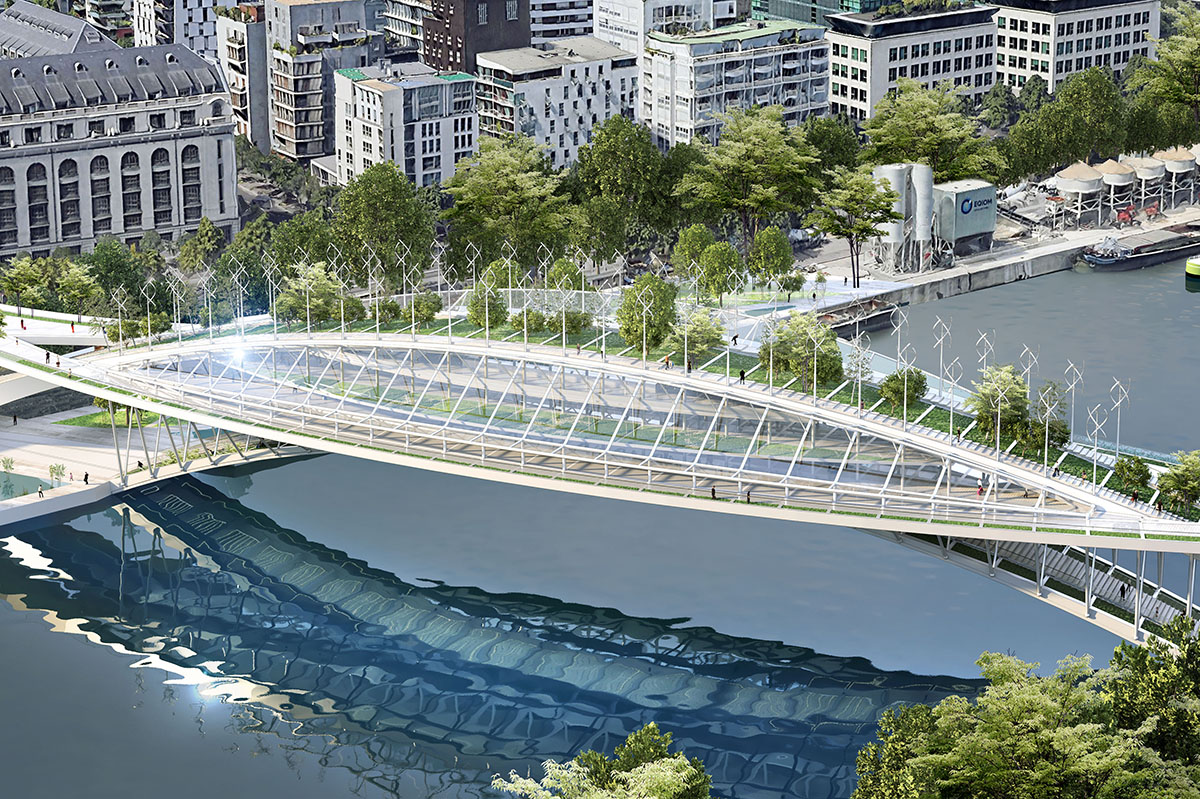 From an environmental point of view, this nourishing project makes it possible to reduce the ecological impact of food transport and abandon mass production (monoculture version based on phytosanitary products from the green chemistry of the 20th century) by developing organic agriculture, democratized and co-cultivated by the new urban “consumer-actors”.

"The Green Line is much more than a place of passage from one bank to the other. It is a place of destination where it is good to have fun, learn, eat, and innovate!," said Vincent Callebaut Architectures.

On the roof, dense and rich urban agriculture is taking root in partnership with "Sous les Fraises". In the bridge, a campus is developing on the theme of the smart and sustainable city (classrooms and training for students, companies, professionals, etc.) as well as restaurants and leisure for Millennials, neighbors, and Parisians.

Further, The Green Line advocates ecological exemplarity through sustainable management of air and water in urban areas. In addition to its densely vegetated roof, the project aims to establish a large 8,500 square meters amphibian garden. In total, 12,000 square meters of new green spaces and phyto-remediation lagoons will take root in the neighborhood to make it breathe better and promote the development of an endemic biodiversity corridor. 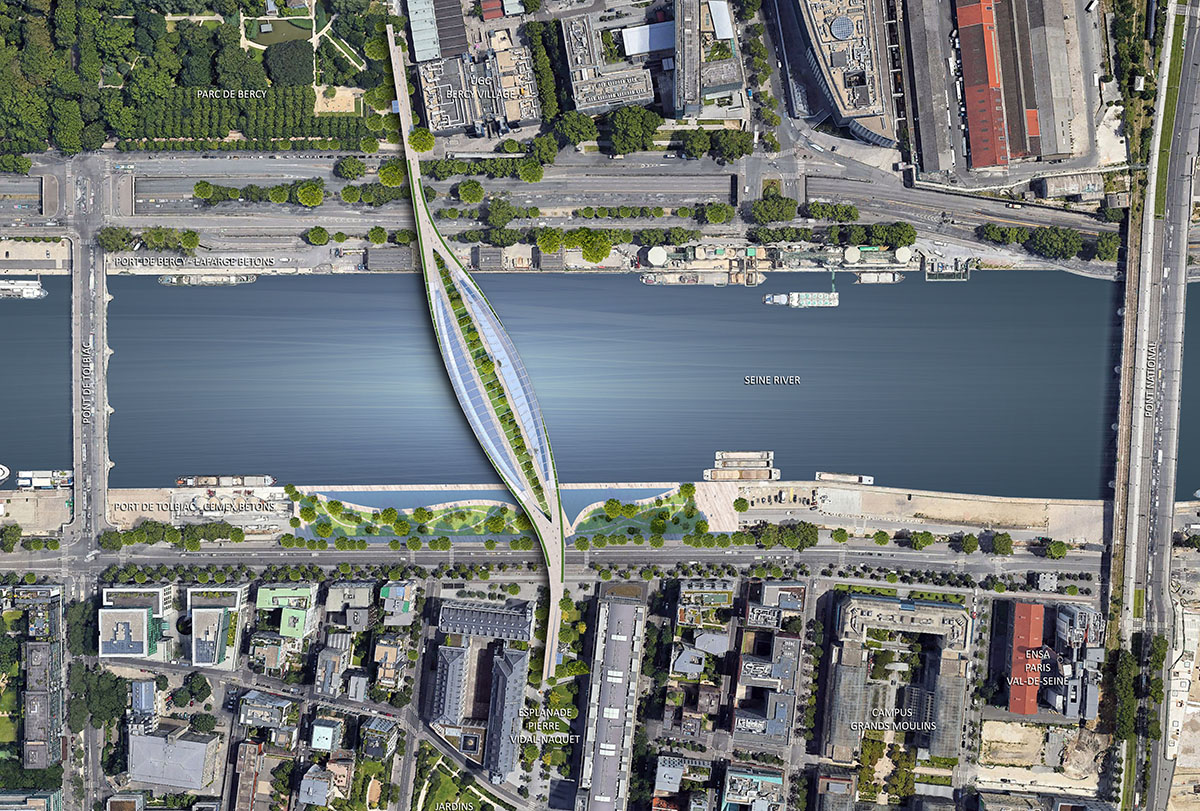 Paris suffers from recurring peaks of pollution from other harmful fine particles because they penetrate deep into the body and increase the risk of heart attacks and strokes. Air pollution control is the first priority of the project.

Water filtration is the second big challenge. The amphibian garden plays an essential role in capturing the pollution of the waters of the Seine thanks to the roots of lagoon plants. 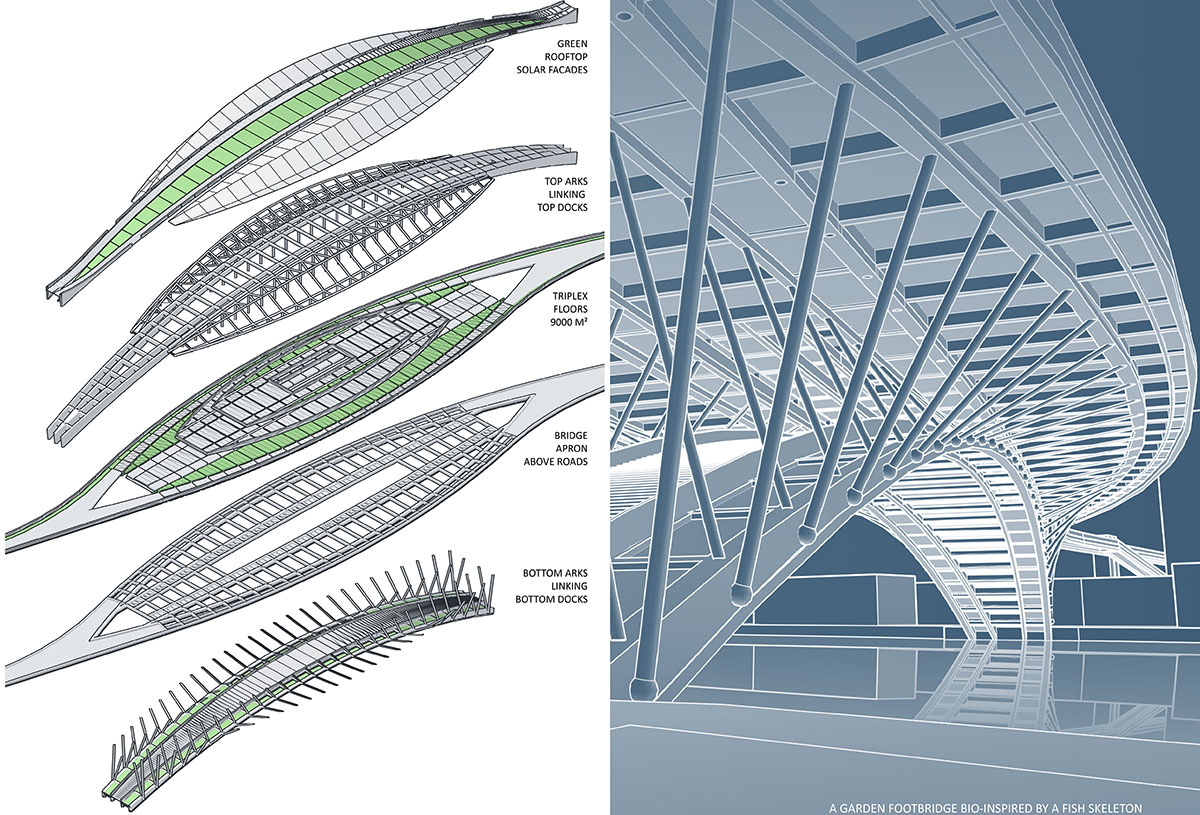 The Green Line integrates the rules of passive bioclimatism through high quality thermal inertia and a double-flow ventilation system between the functions. Depending on the time of day or night, these functions can exchange calories and frigories in real time. 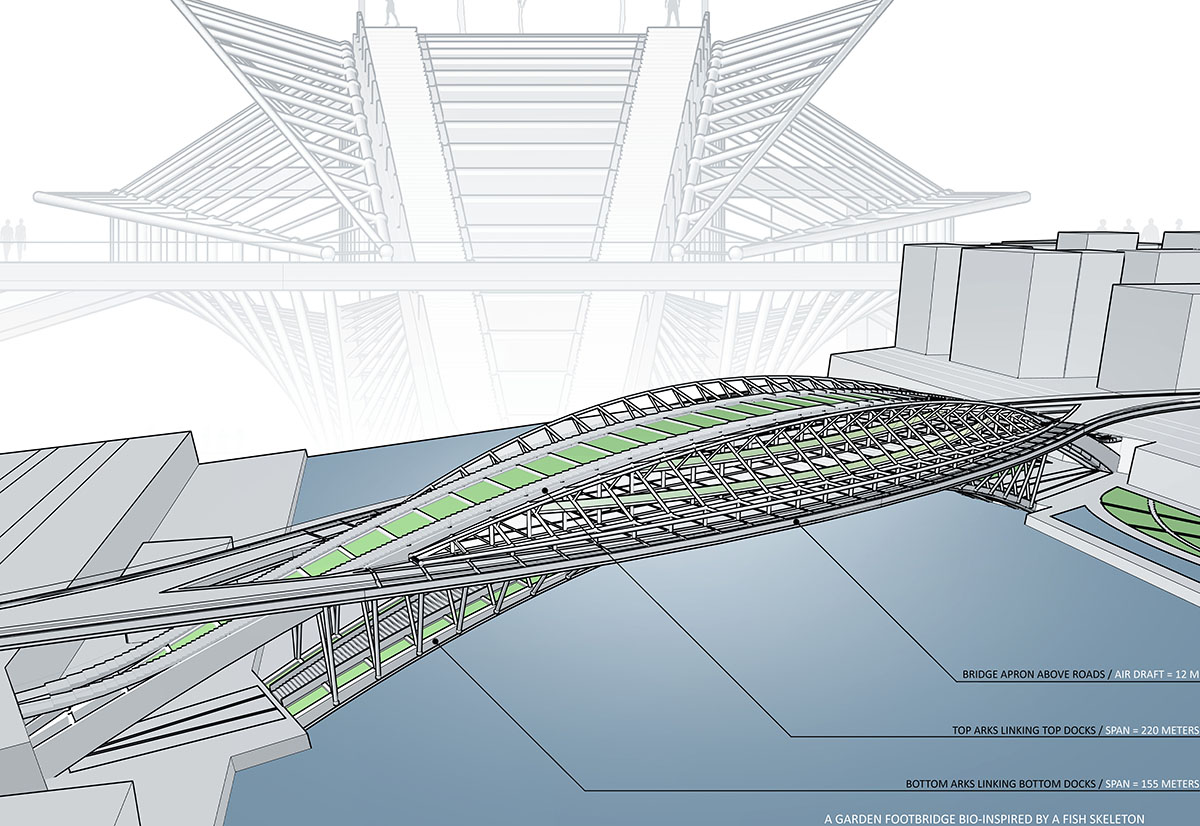 "Our approach is open and co-constructed with as many stakeholders as possible, whose opinions will be widely taken into account during the consultation phases. The Green Line will have a social role for its users," said Vincent Callebaut Architectures.

"It promotes exchanges because it is a place of relaxation, contemplation, and well-being." 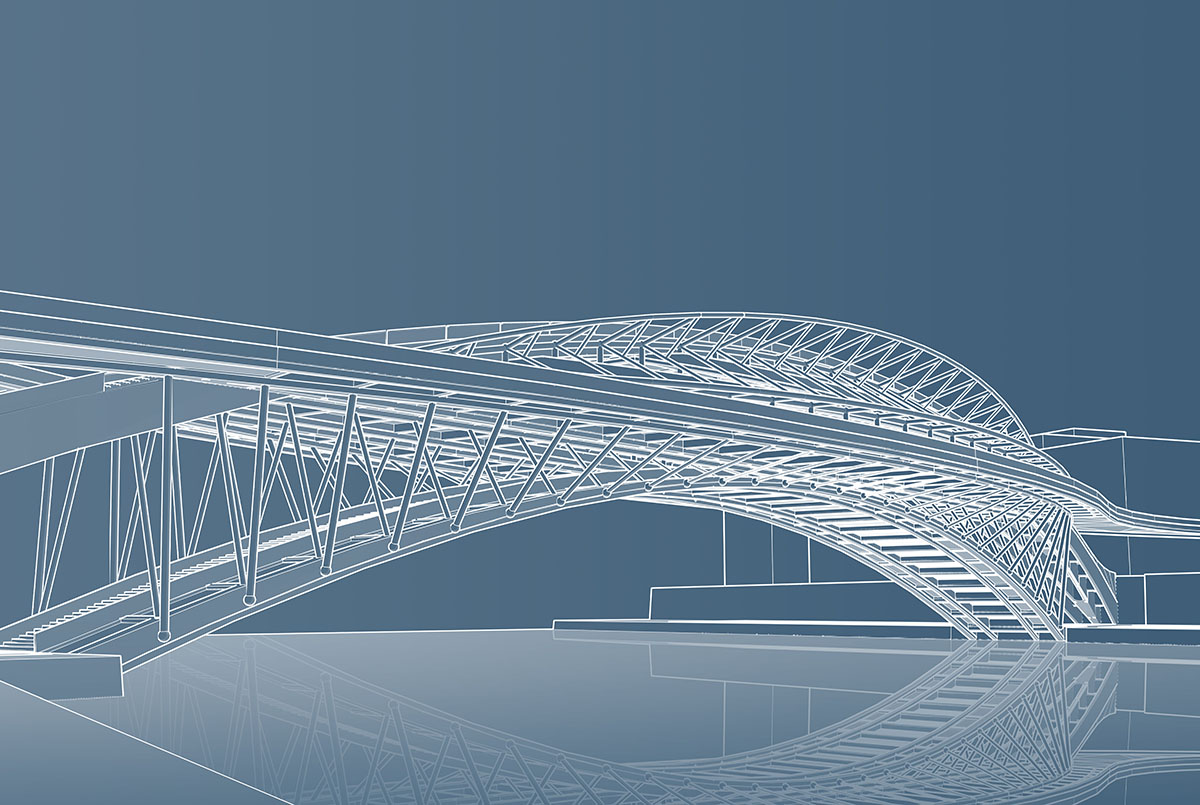 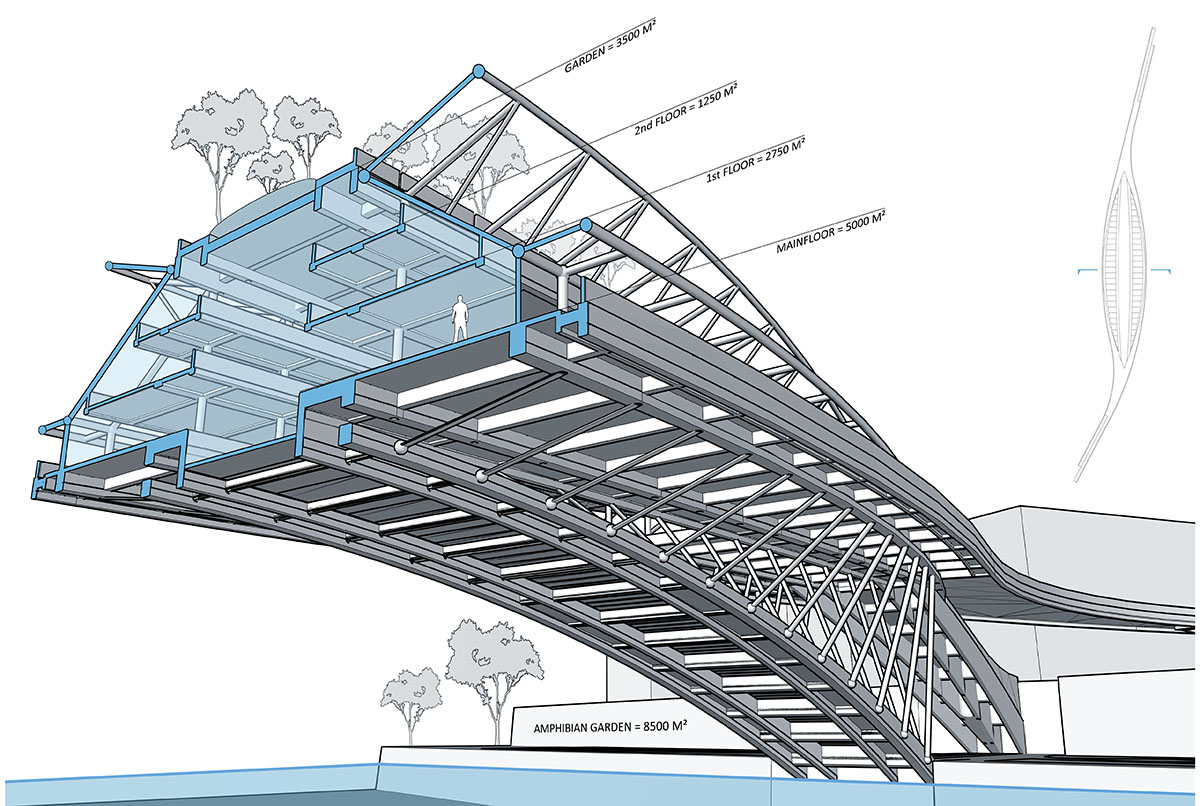 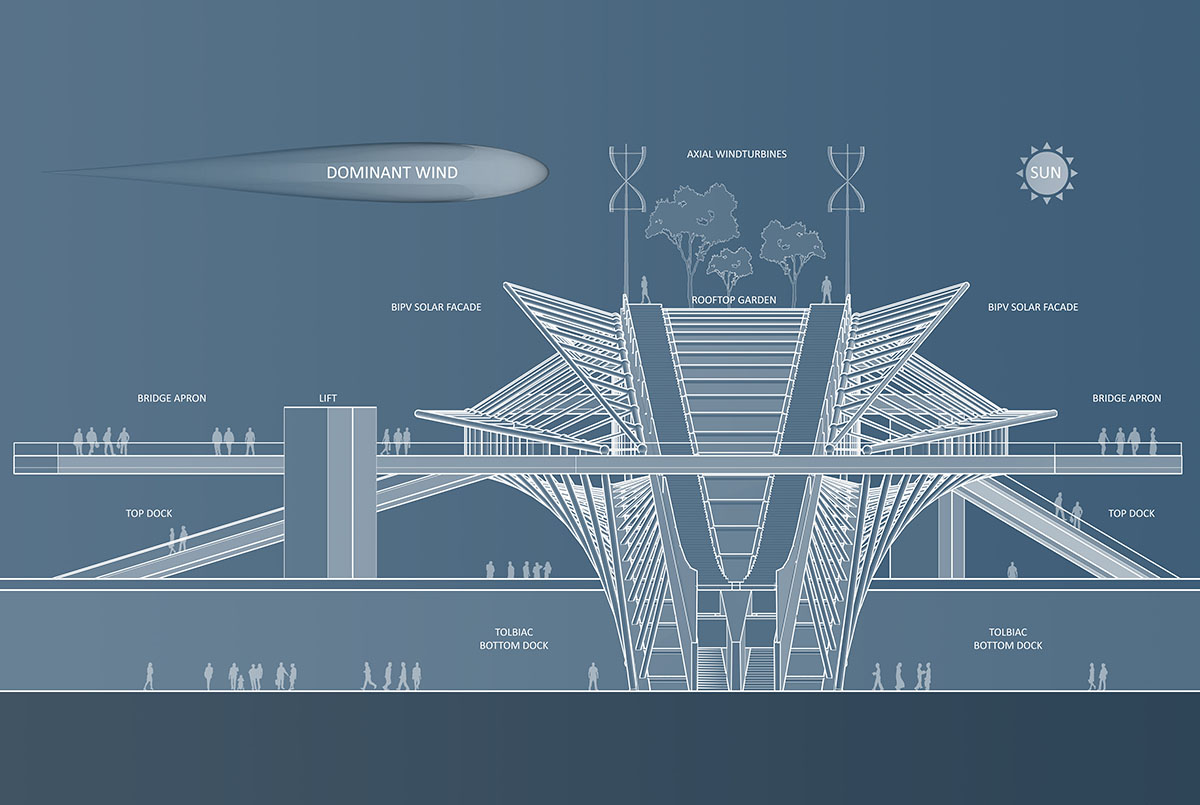 Location: Inhabited Footbridge between the 12th and 13th arrondissements in Paris, France