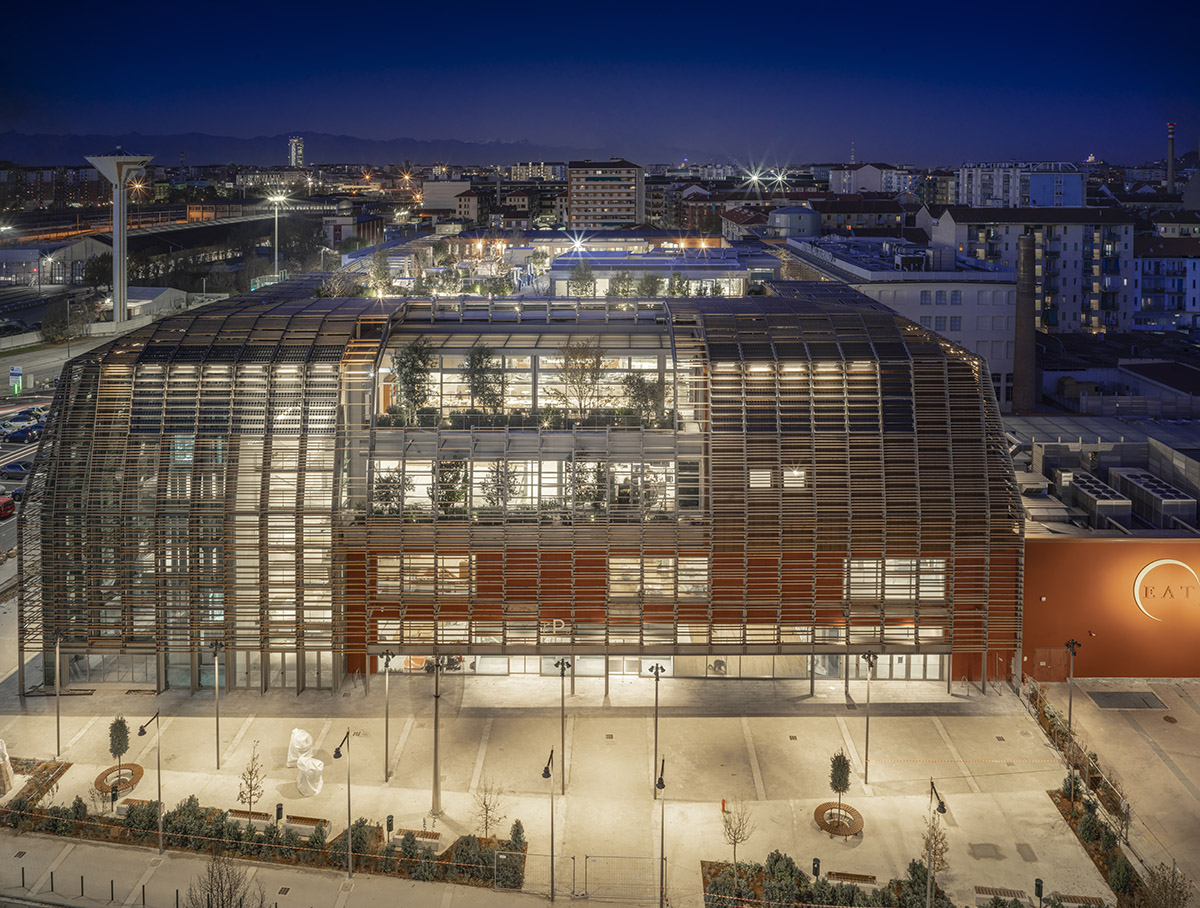 The new building, named Green Pea, is set to open to the public on December 8 in Turin, Italy. Cristiana Catino and Negozio Blu, former designers of the first Eataly, conceived a symbolic architecture to give shape to the strategic vision of Green Pea: a highly sustainable building, a manifesto built with new technologies and natural materials to convey, through architecture, the idea of respect for the environment and harmony with nature.

The external shell creates the fifth facade of the building, while ensuring climatic and environment conditions inside. 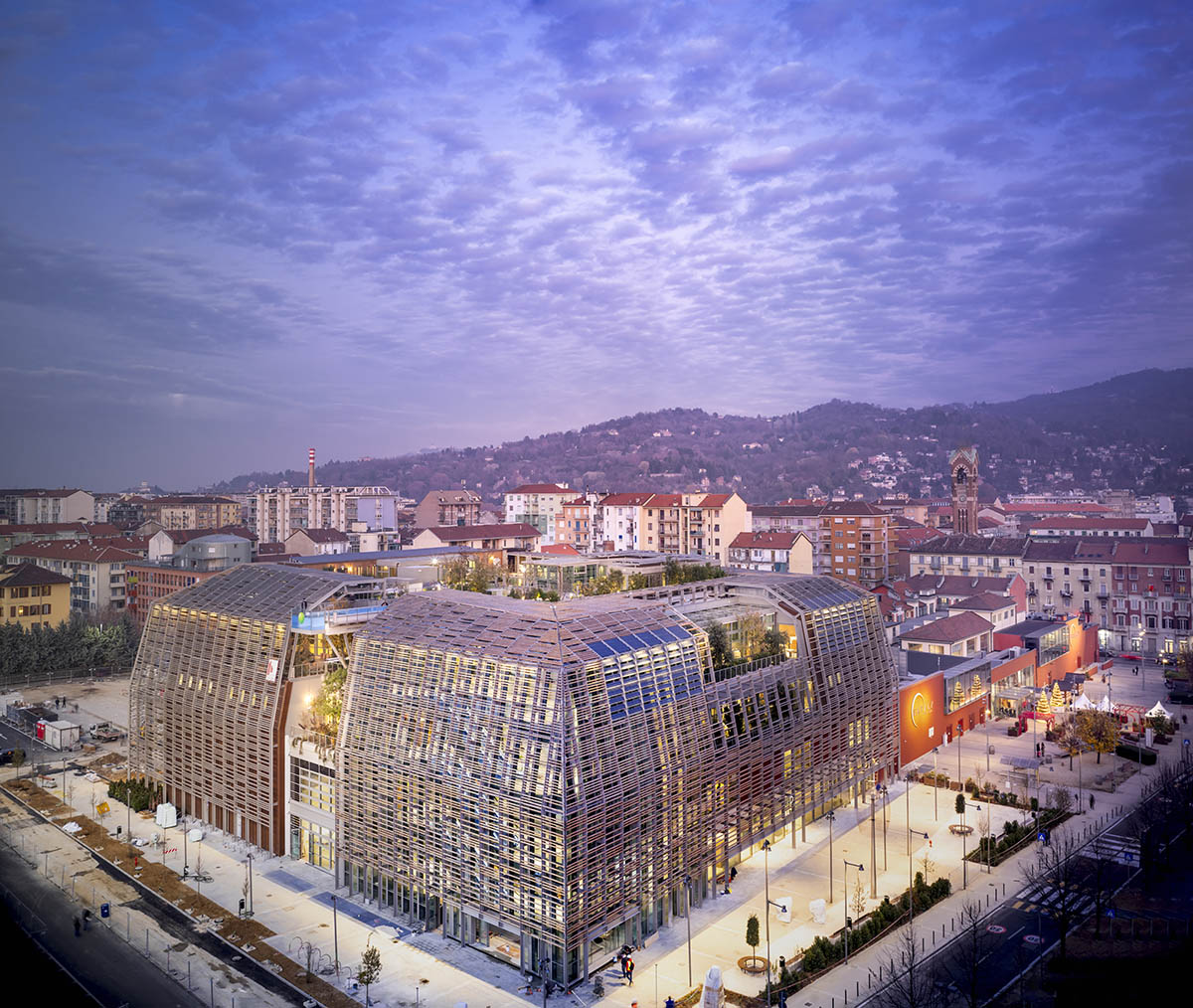 Commissioned by Eataly Real Estate, Green Pea is the final step in the redevelopment of the former Carpano Lingotto industrial area, a pivotal project in the regeneration process going on in the southern area of Turin.

The project is described as "an architecture in which sustainable materials, greenery and natural light are the protagonists."

"A manifesto built as an experience of the possibilities and beauty of new technologies of conscious building and of the values represented by a vision of respect for the environment and the human being," stated the architects. Green Pea represents a new format of urban architecture in balance between architecture and environment, sustainability and beauty, quality and functionality. Defined by a plot of natural materials and permeated with light and green, it is a resilient and eco-sustainable building in every detail.

The organic volume, with a particular multifaceted shape, is spread over five floors for a height of 25 m in continuity with the existing building line and extending the façade of Eataly. The North-South orientation and the flared shape of the top floor are designed to adapt to climatic and environmental conditions so ensuring the best distribution of solar radiation. 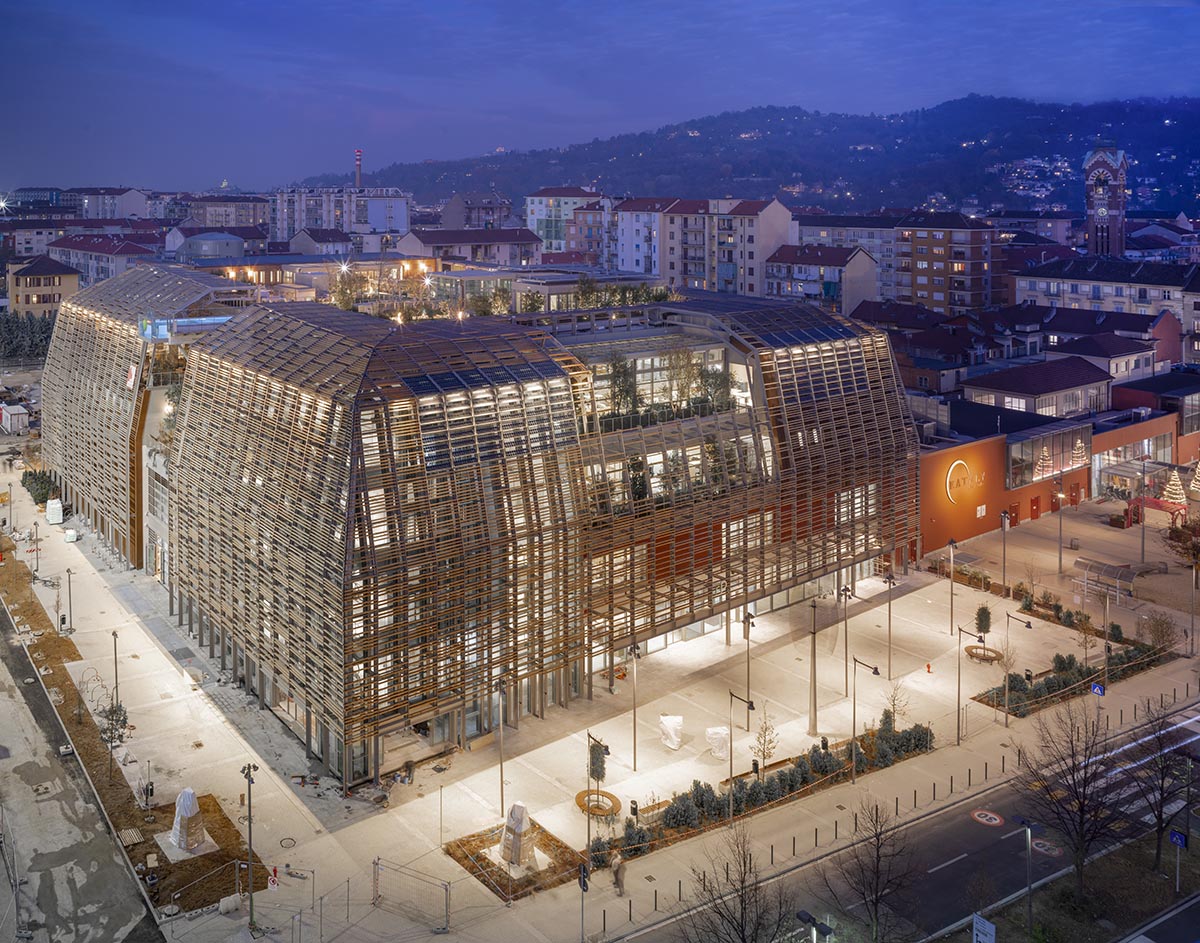 The external envelope consists of a double level of surfaces. An external shell of wooden sunshade slats, supported by a steel rib, forms a technical "treillage" acting as a filter between inside and outside allowing the building to breathe, open up to the city and protect itself from the sun. The slats, heat-treated for external use and stiffened by a metal core, were made with fir wood recovered from the forests of the Trentino Val di Fiemme and Bellunese, destroyed by the October 2018 storm and traditionally used for the soundboards of musical instruments.

The internal shell, on the other hand, made up of an infill of KVH solid wood sandwich panels, insulated with wood fiber and covered by sheet metal, is marked by large cuts in the glass surfaces flooding the interior spaces with natural light. The fronts of the building define a sequence of paved and garden pedestrian spaces. 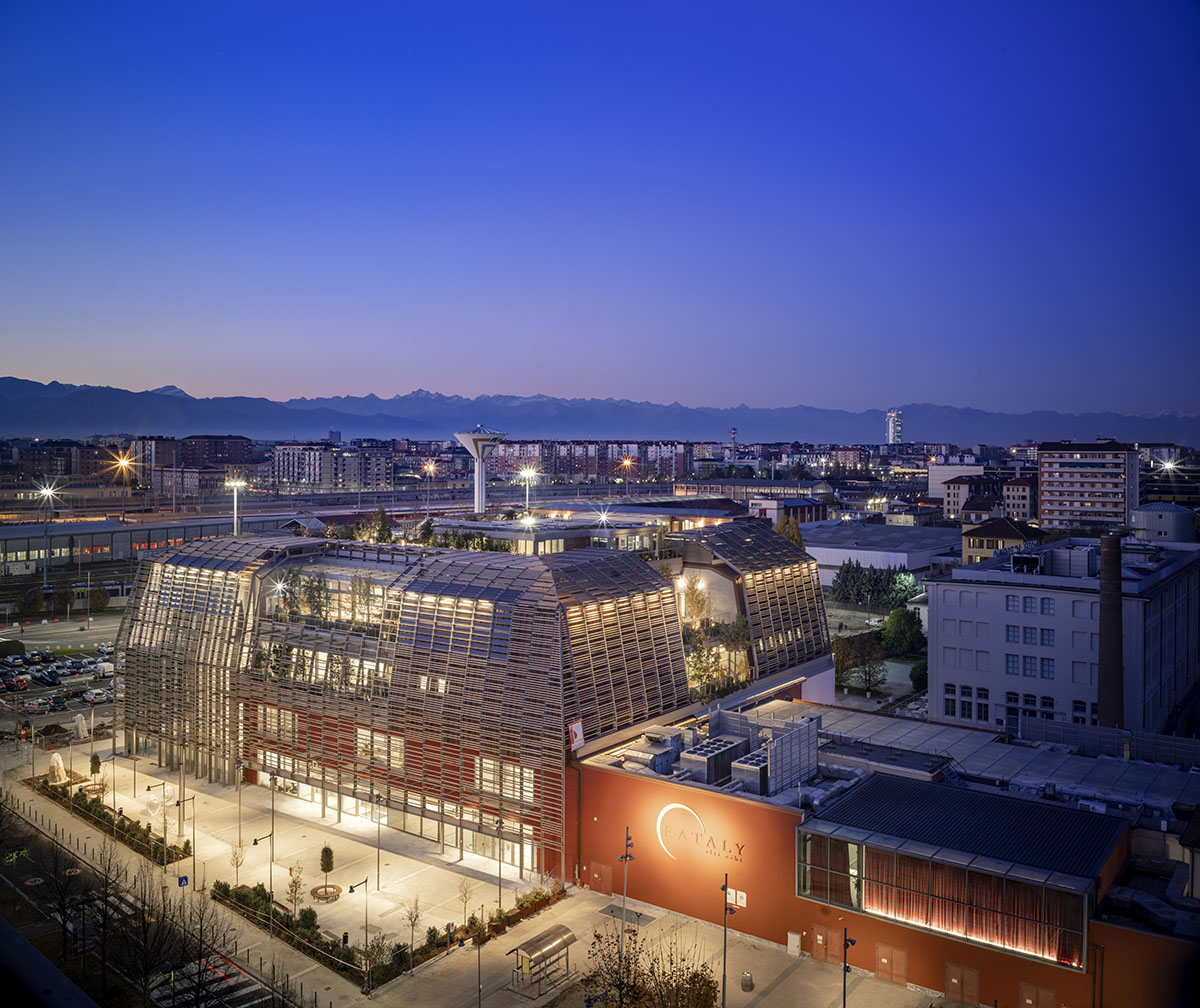 The load-bearing structure is made of steel, a 100% recyclable material, and is entirely dry assembled by bolts, so as to be easily dismantled and removed, allowing in the long term the extension of the building life cycle: a mesh of main (HEA 1000) and secondary (IPE400) beams resting on supporting tubular pillars, reduced to a minimum to allow greater freedom in the design and management of spaces.

The system resulting is then light, but at the same time highly resistant. The construction site was organized in vertical sections, from the ground to the last level, optimizing times. 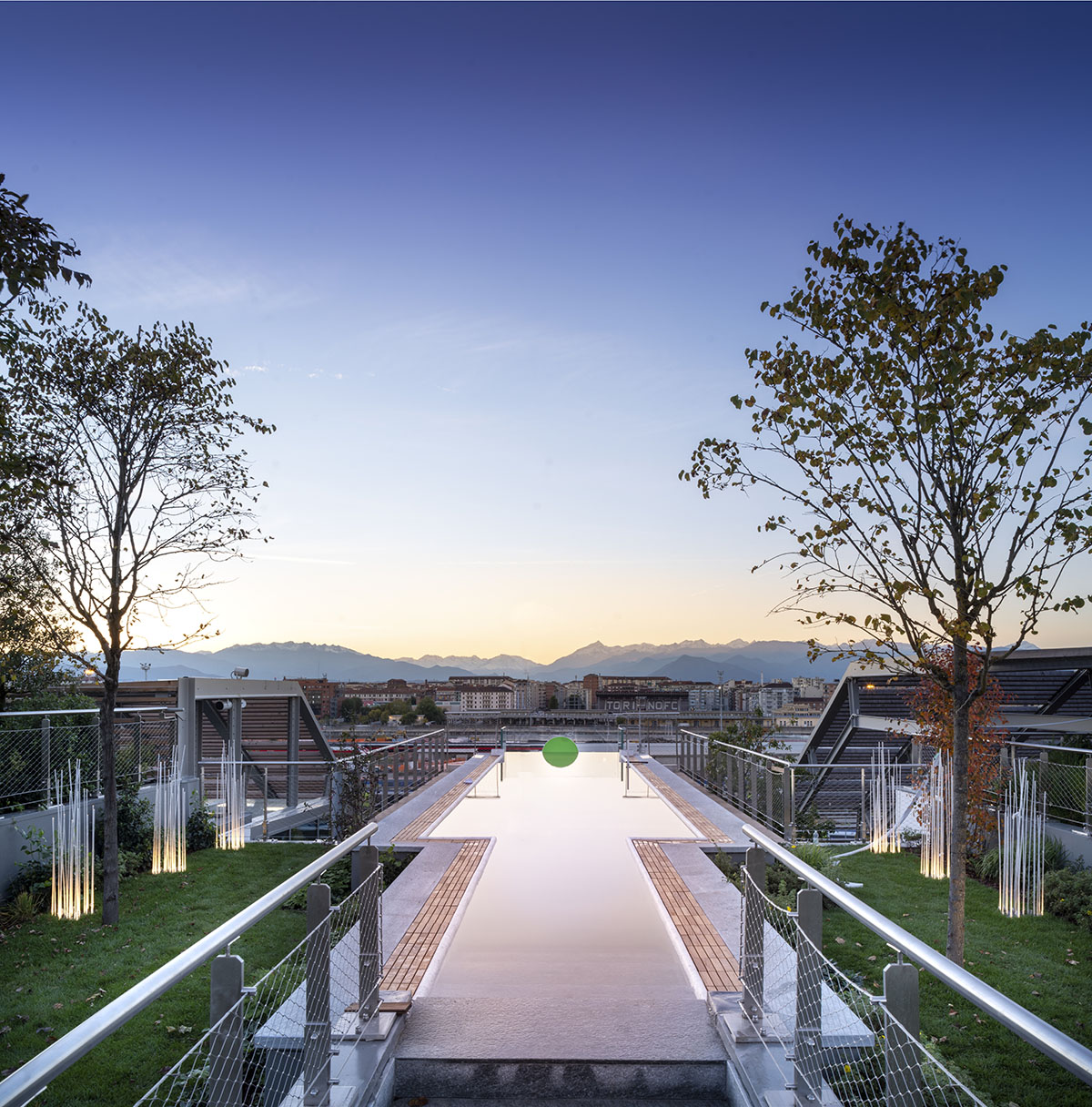 Greenery is inserted through the organic texture of the wooden façades, becoming part of the architecture. Green, not used in a mimetic way, grows in the terraces where tall trees are planted in large tanks. The building thus appears as a natural organism that vibrates according to light and to the plants growth. The vegetation was selected to be suitable for the climate and microclimate of the different façades, favoring native plants and Italian flora.

Different natural environments start from the base of the building and meet in the large equipped garden roof, characterized by a bioclimatic greenhouse, that becomes the "fifth façade" of Green Pea.

In this part of the city, heavily industrialized during the twentieth century, green returns to play a central role and to be read in the urban fabric. A match of plants and hardscape creates the pedestrian square at the foot of the building, an agora of life. 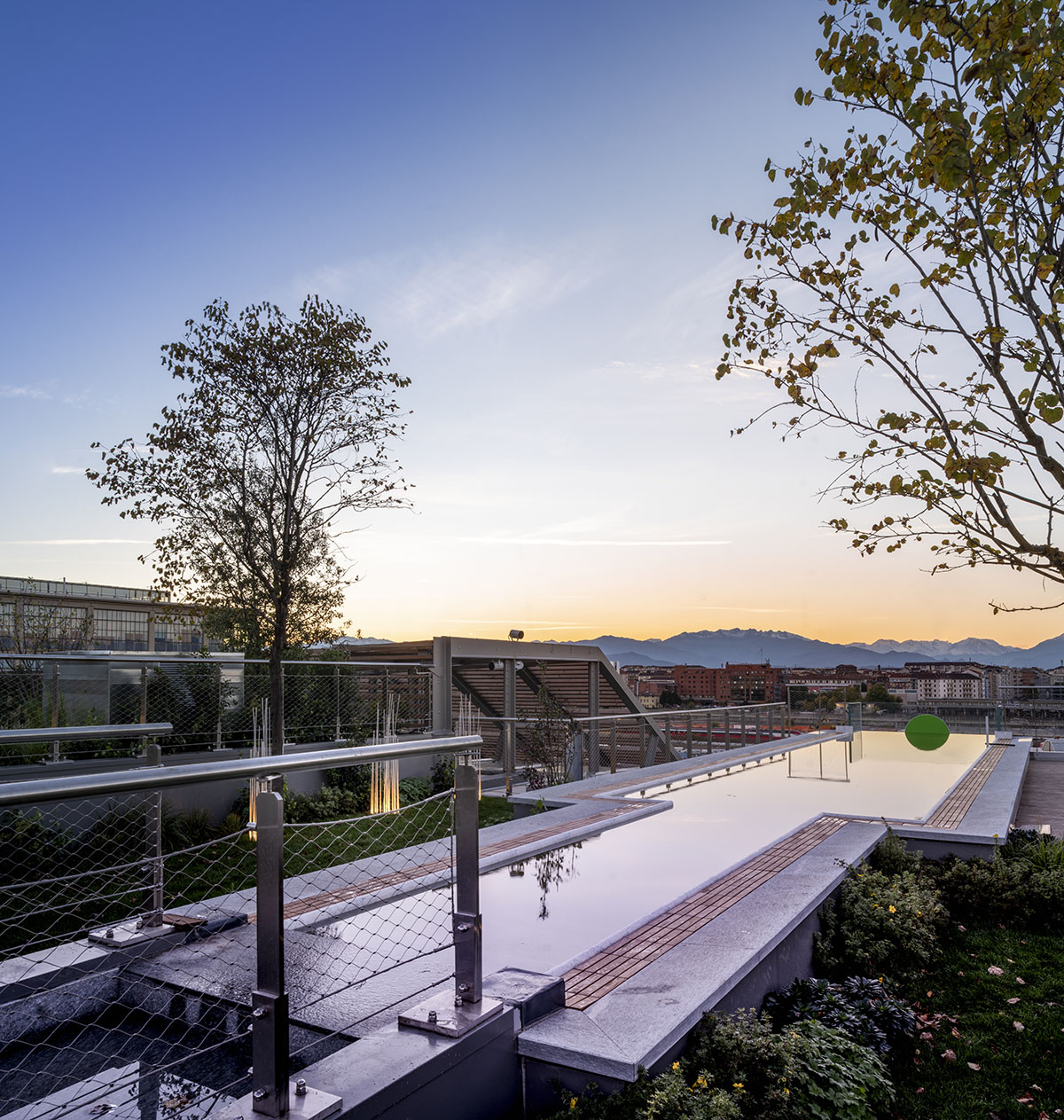 In the interiors, a simple and clear concept involves all the senses and allows a complete experience, immersed in the identity of the Green Pea brand and its values of respect and conscious consumption.

The layout of the various floors creates flexible spaces, immediately identifiable paths and relationship with the external greenery and widely welcomes natural light. The interiors feature traditional materials such as natural lime and wood combined with luxury materials such as leather and velvets. The parquet is made with wood already felled for natural causes and then picked up along the river beds of the Val Varaita. 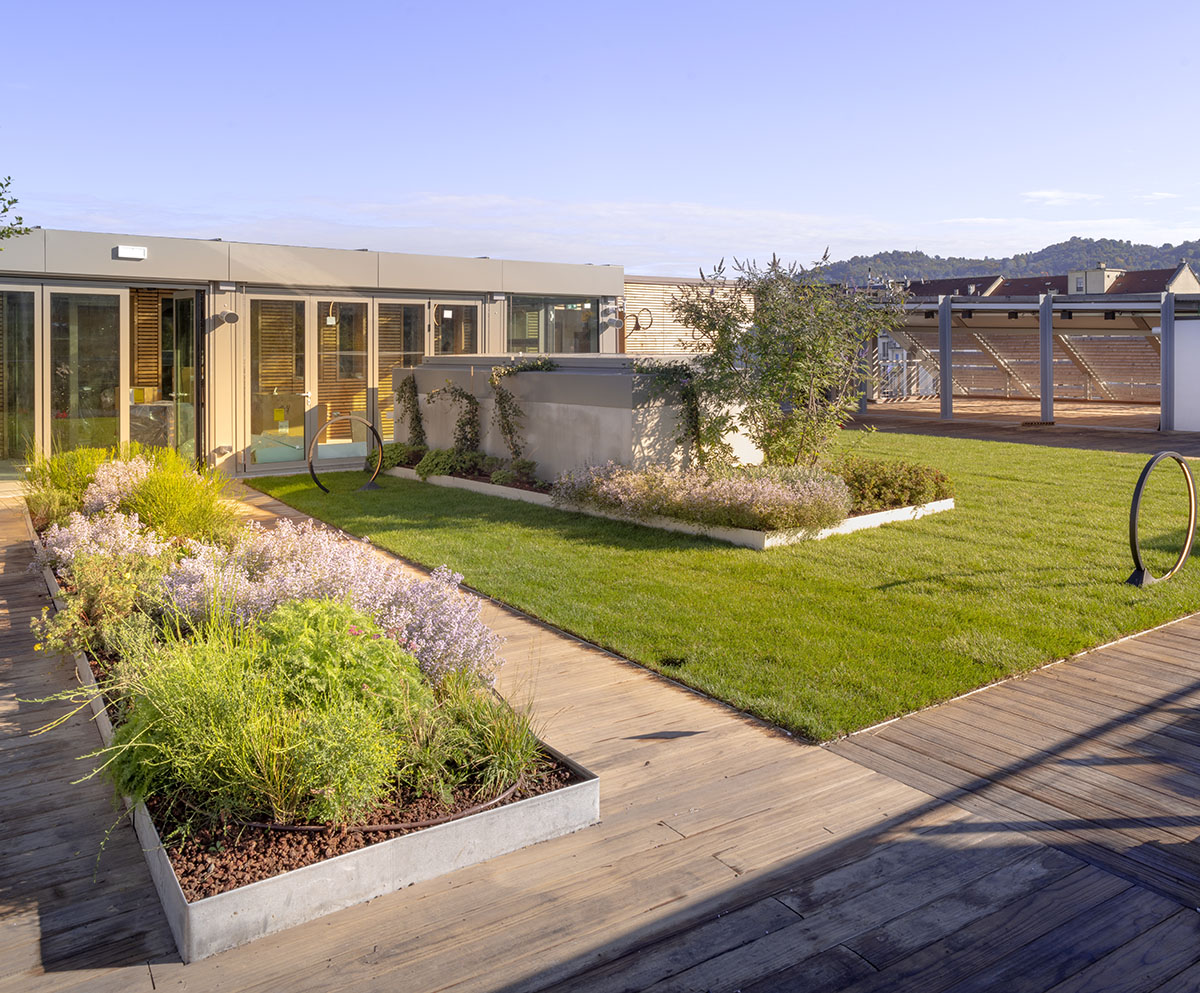 The plants are intentionally left visible to recall the industrial origins of the site. The combination of these active and passive environmental strategies, aimed at achieving maximum energy efficiency and reducing CO2 emissions, has made it possible to obtain a score of the Italian Itaca Protocol of 3.5 and create a NZEB (Nearly Zero Energy Building) in class A3. 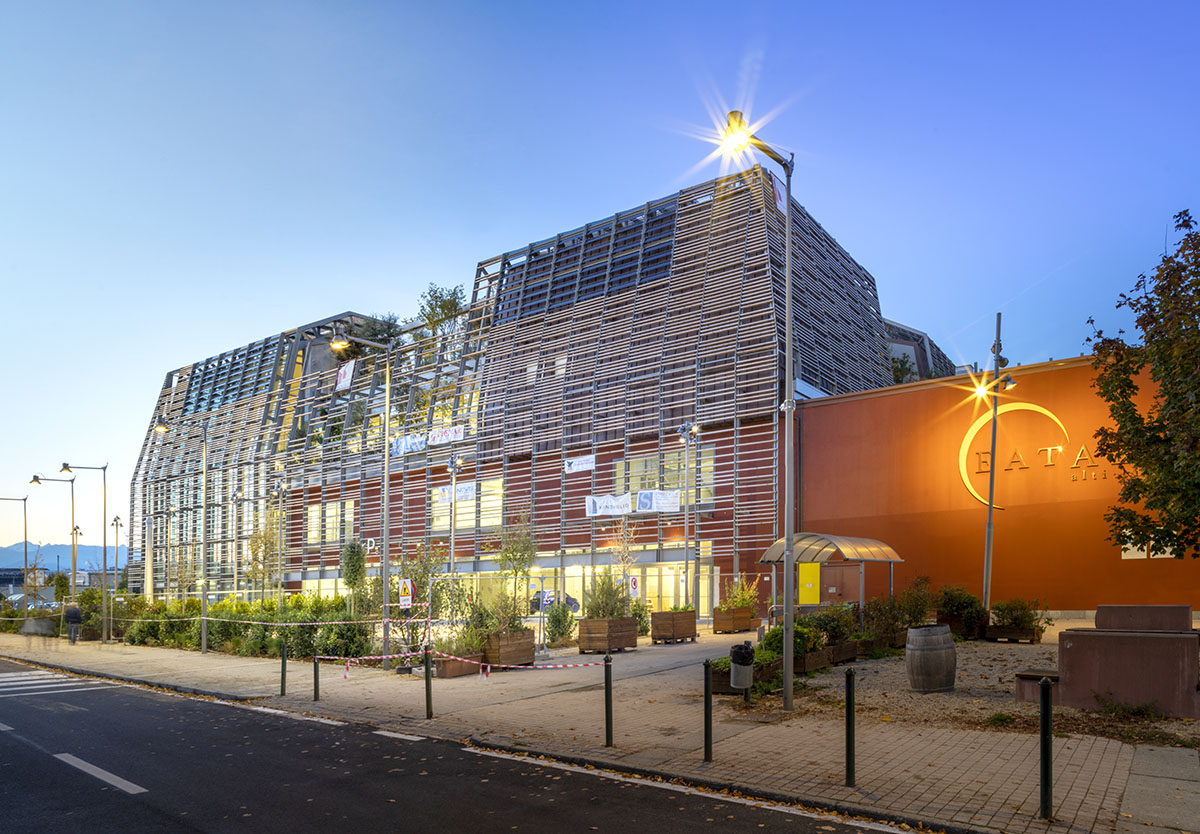 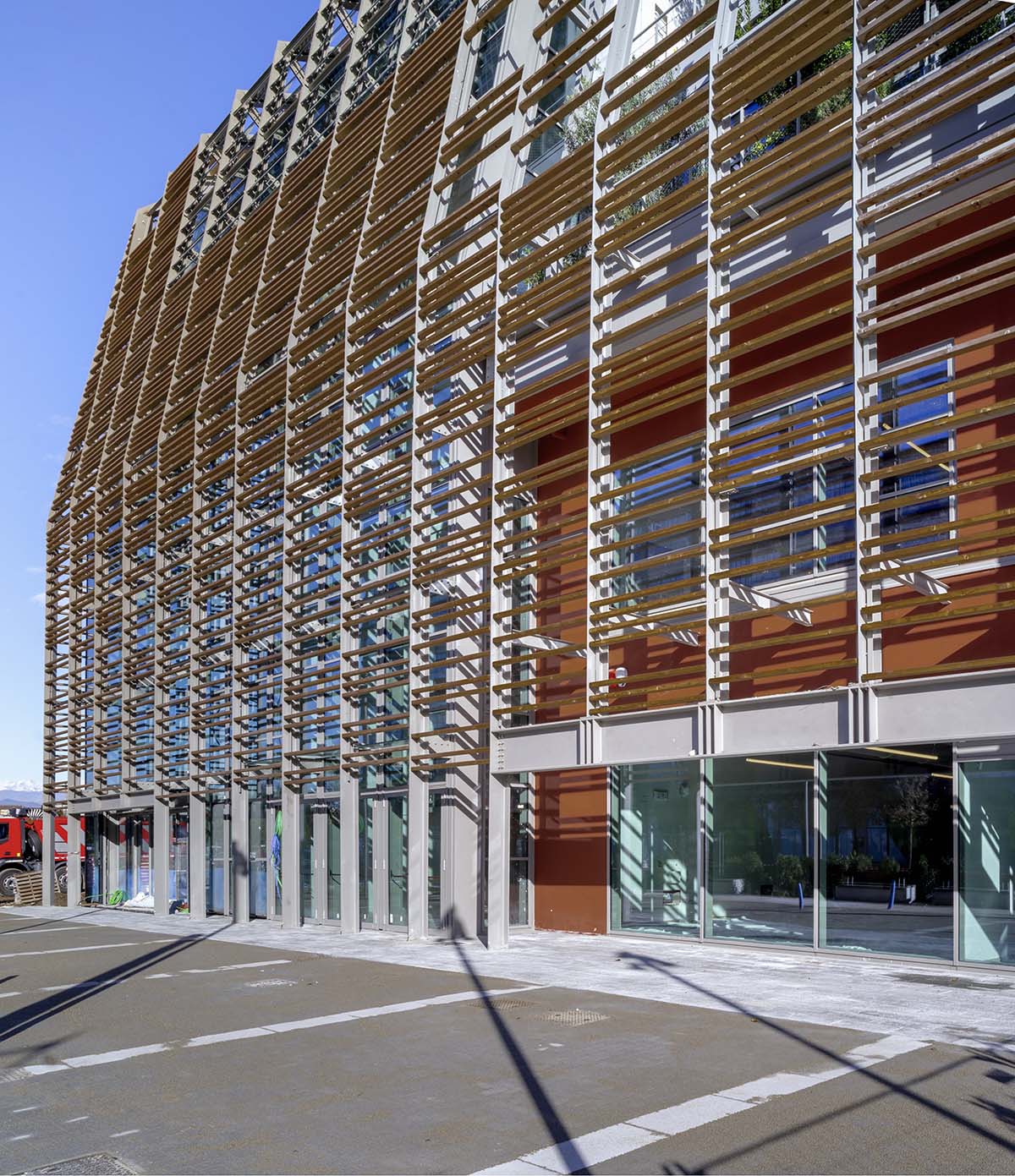 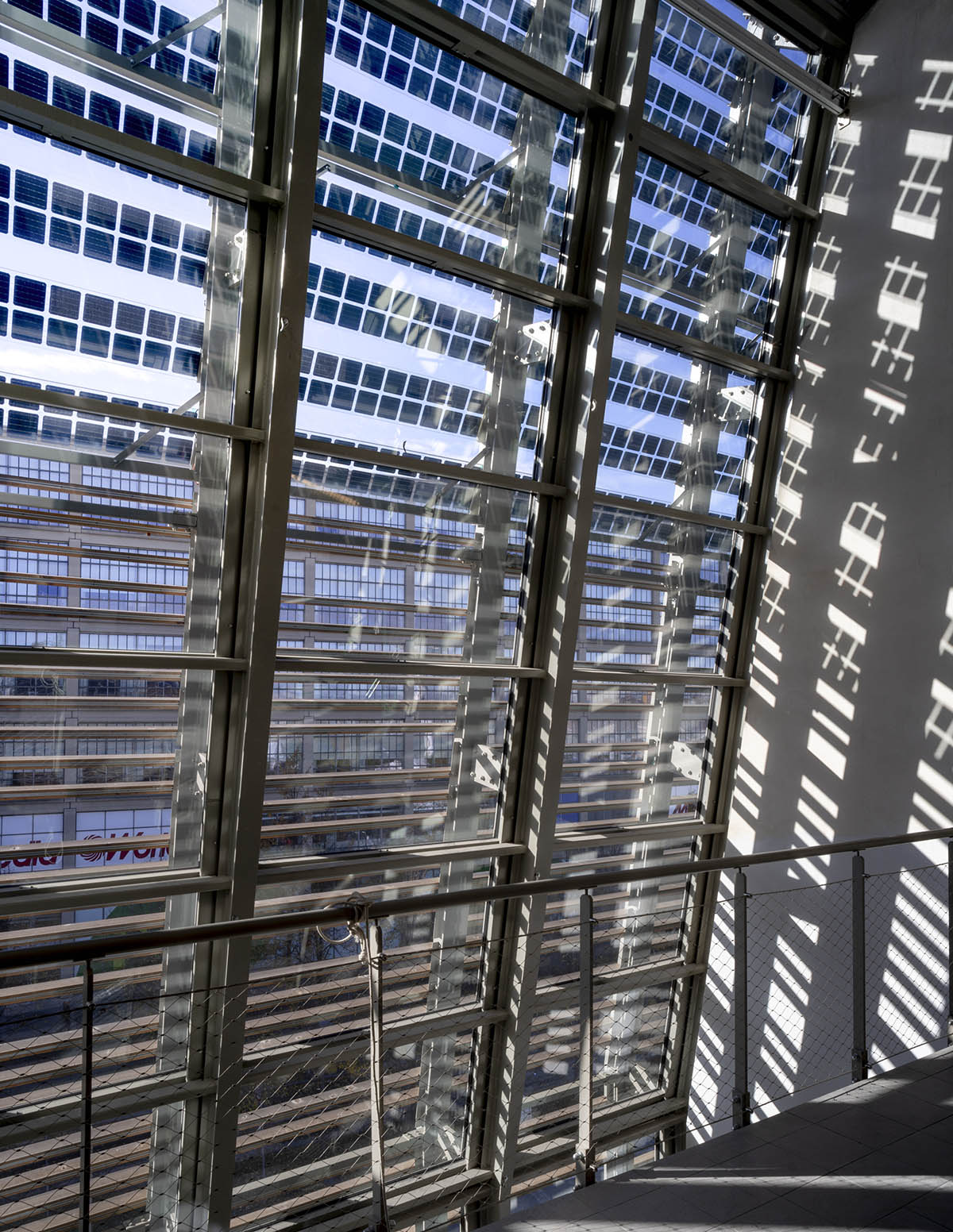 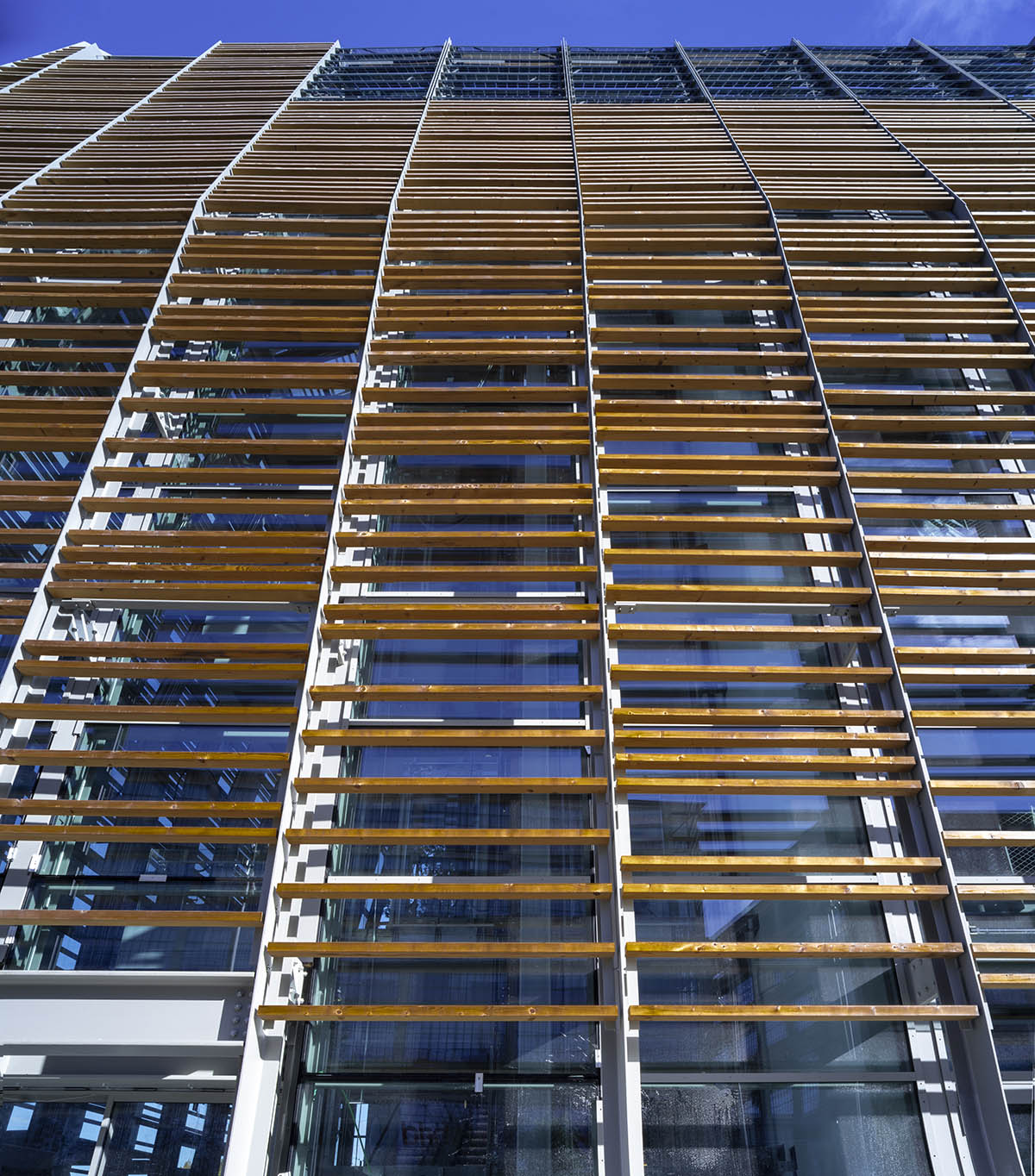