“The Architecture Essay Writing Competition 2020” (TAEC) conducted by IDHA Labs was concluded with official result announcements made by an esteemed Jury panel, along with an opportunity for the winners to read out their essays. IDHA Labs also formally launched their blog of essays with the shortlisted entries. The result announcement session was a conclusion of the two-month-long evaluation period by the jury.

The jury panel was a team of eminent architects and writers in India- Apurva Bose Dutta, Gita Balakrishnan, Mrinalini Ghadiok, Madhavi Desai and Yatin Pandya. The panel was assisted by a team of Shortlisting Committee (SC) members to present the best scoring essays from which winners were picked. 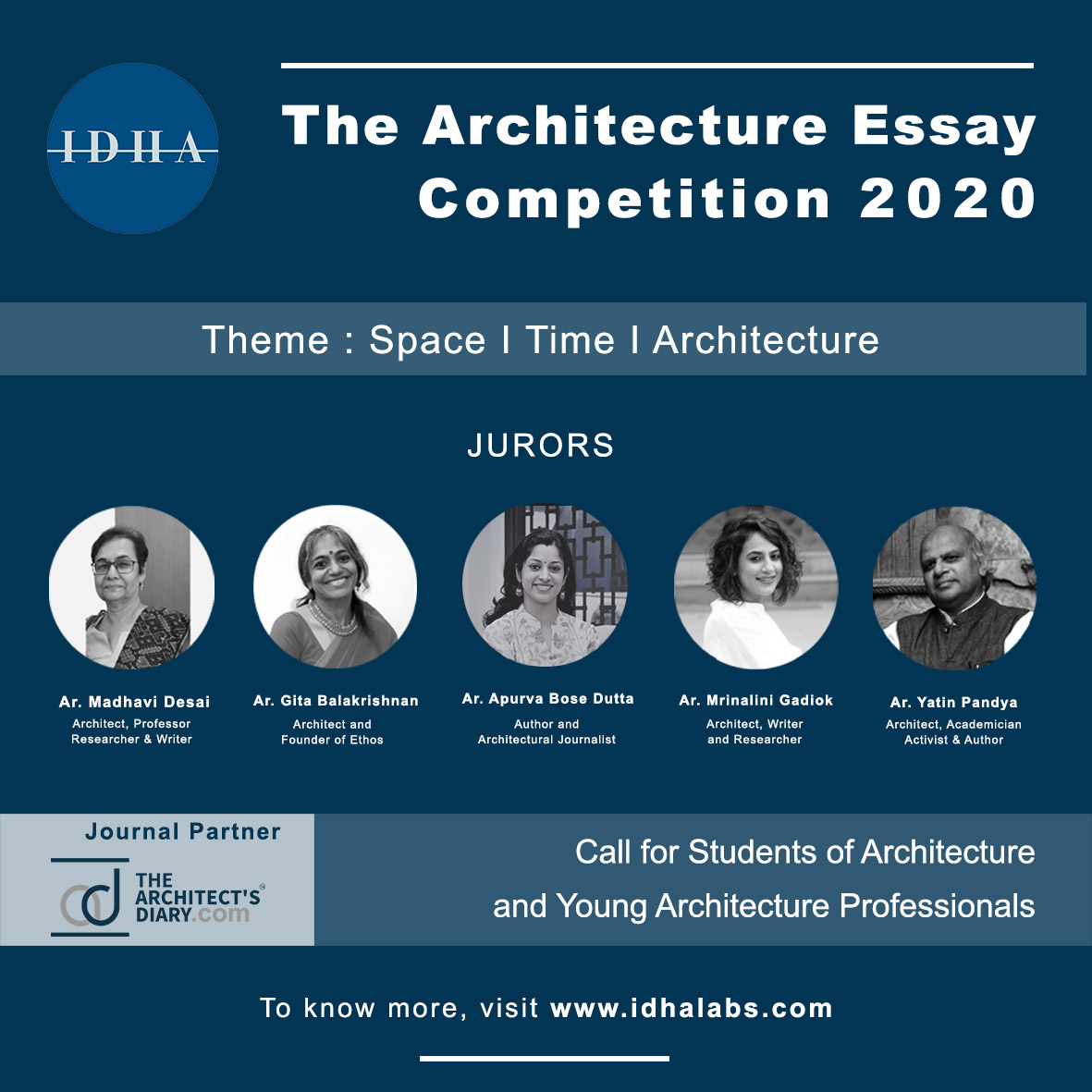 The essay competition was announced on 1 September 2020 with briefs for Student and Professional categories. The participants had time until October 11, 2020, to submit, post which the SC was assigned with evaluations. The SC worked under the aegis of IDHA Labs to submit a shortlisted lot of essays to the Jury panel. The Panel worked then until last week of November and disclosed their decisions to IDHA Labs, which were published officially on November 29 2020.

The briefs of the competition

The competition was themed as “Space, Time and Architecture” applying to both professionals and students. It expects a discourse on the trends seen in spatial evolution across times. The student brief was titled “Approach to Architecture of India: Traditionalizing Modernity or Modernizing Traditionality”. The student’s brief asks the question of which would make a better choice between updating our traditions and recreating modernity with old wisdom. The first choice is expressed as Modernizing Traditionality while the second as Traditionalizing Modernity. Furthermore, the student’s brief is to discuss the challenges that our traditions have faced, while to also check if our traditions have given way to the modern. Besides, the student’s brief asks how/if we can embrace traditions and modernity, without comprising one for the other. 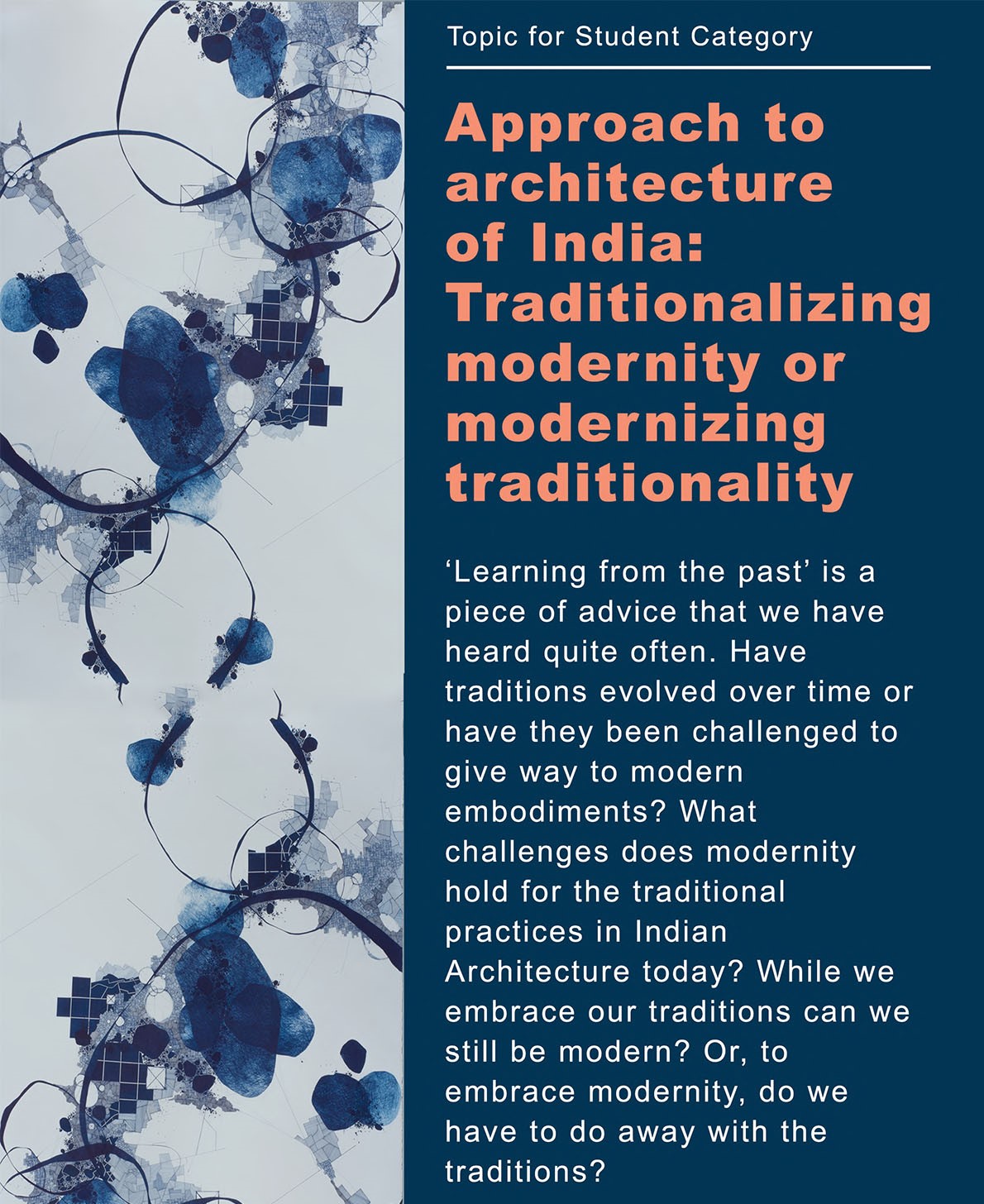 The professional’s brief titled “Cities Matter: Rethinking the Modern Urbanscapes of India” is to explore reimagination of modern urbanscapes in India, in alignment with what the 21st century expects. The brief prompts the professional entrants to think beyond the common talking points of planning, construction, aesthetics and material usage. While the student’s brief is bigger, it helps understand the framework within which he could work his essay. The professional’s brief is open to exploration thereby expecting more awareness with the participant. 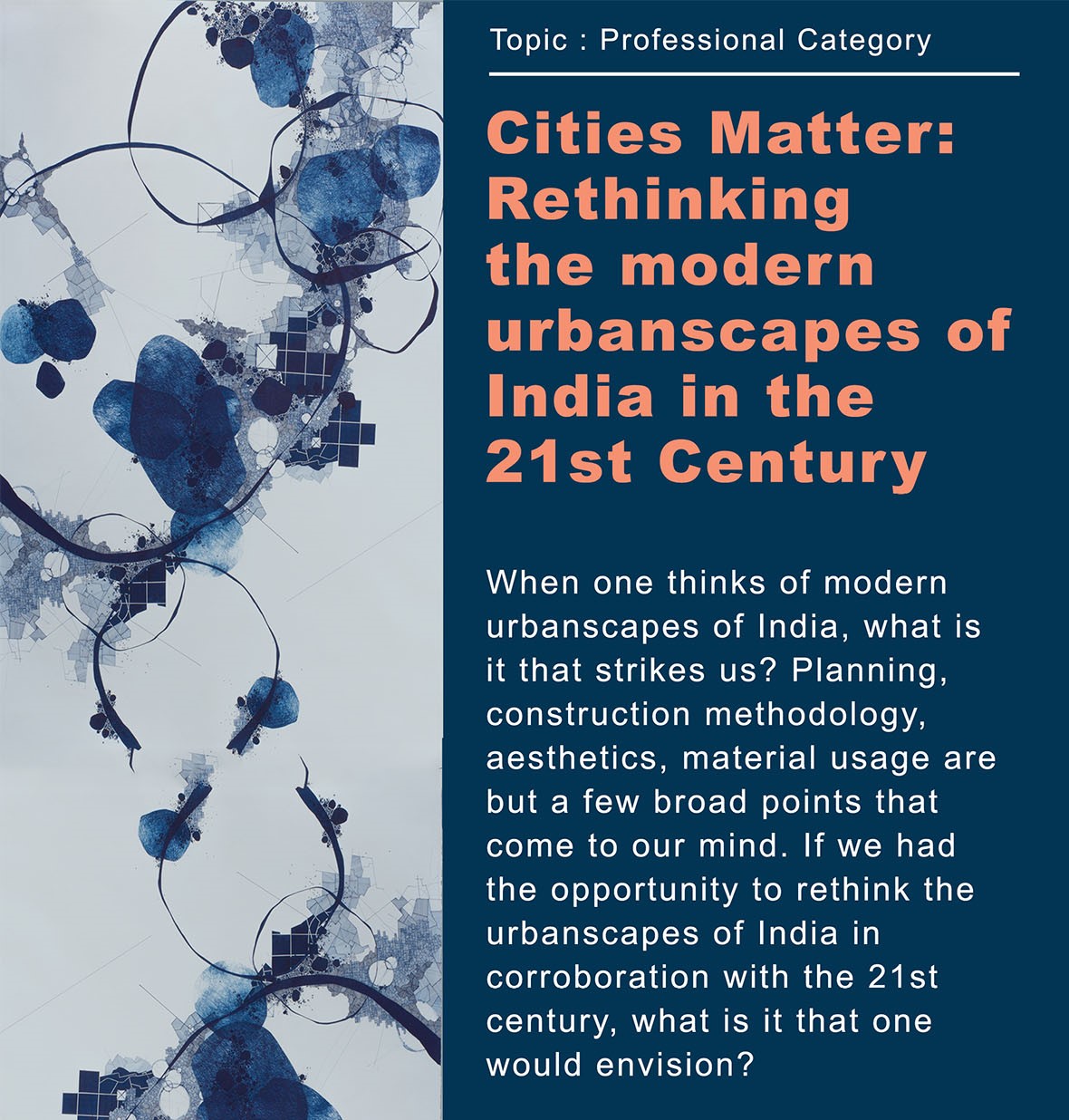 The session was an hour-and-a-half program. The agenda began with introducing the competition’s goals to the different participants who tuned in to view the results and ask their questions to the jury. As a follow up the Jury panel shared their appreciation and views about the effort to promote the niche area of architectural writing.

The session's principal moderator from IDHA Labs said that the competition successfully garnered the support of several participants with their entry submissions across the various Indian states. The aims of the competition were also to encourage and bring to light the creative and research possibilities of writing in architecture. Moreover, IDHA Labs also strove to establish a platform for students and professionals alike to test their capabilities and learn from a Pan-Indian competition. This is a checkpoint in their passion to teach and share with the younger lot in architecture in India. The principal moderator also expressed his gratitude to the Jury members who have extended their moral support to the IDHA Labs team. Besides, the volunteers were also appreciated for devoting their time and effort to assist.

As a follow-up, the Jury members shared their views and appreciation of IDHA Labs’ effort at this competition. Each of the jury members mentioned their thoughts on how important the activity of writing is within architecture. Particularly, Architect Yatin Pandya had put forth an analogy that architects functioning as writers have the space to act as advisors to different areas of professional practice, while also aiding with self-introspection. Architect Apurva Dutta had highlighted how there are growing visibility and advocacy for architectural writing and spoke her thoughts briefly on her experience as a writer herself. Architect Mrinalini Ghadiok expressed the importance that writing carries in terms of intellectual activity associated with it. Architects Madhavi Desai and Gita Balakrishnan had specified how delightful they felt reviewing the many participants that possessed a clarity of thought and writing skills in their essays.

The moderator of the question-and-answer period, from the Shortlisting Committee, had curated a few questions sent in from the participants to put forth to the Jury members in this session. The questions were about developing writing skills such as title framing, structuring of essays, research methodologies and more. The Jury members also provided insightful responses which made the session a good takeaway for the participants tuning in.

Following the question-and-answer period, the Jury was requested to announce the winners in both the student and professional categories, the participants of which read out their essays upon result declaration. Each of the Jury members also shared the qualities which helped these essays bag the prizes and also pointed at the few areas where the winners can improve their skills.

The Professional Category winners are Architects Shivani Pinapotu and Mihir Sriram, whose essay is titled “Are We Designing Smart Cities or Smart Looking Cities?”. The Jury members had mentioned that this essay had a well-built narrative around the arguments which the entrants expressed and that the same was structured very neatly. These features of this essay made it a very enjoyable and insightful read. Furthermore, this essay was said to have been a thought-provoking read too. Amongst the student entries, the winning essay was “Modernity: The Latest layer of Tradition”, written by student architect Yakin Kinger. The jury commended Yakin’s precise comprehension of the brief and his pragmatic response to it, which is exemplary at the student level.

The student category’s trophy was a tied victory. The prize was also won by the essay titled “Traditional and Modern: A Social Construct”, written by student architects Kayva P Krishnan and Malavika S Nair. The jury appreciated this essay for the intriguing reflections that were portrayed by the writers about the concepts mentioned in the brief, in addition to the way forward suggested in architectural design for the Indian context.

Jury Reviews on the Competition

As mentioned earlier, this competition was an effort to bring to light the creative allied field of writing within architecture. IDHA Labs has also taken similar initiatives before by organising competitions for Photography, sketching, illustrations and Product Design and more. Along these lines, an upcoming competition by IDHA Labs is the “NODE: Pavilion Design Challenge”.

Architect Yatin Pandya shared his testimonial that the competition was organised very meticulously with transparency for the more than 320 entries received. He also stated that such competitions with entries that display maturity and clarity can stimulate meaningful dialogues and exchanges within the fraternity. Architect Madhavi Desai had mentioned that the competition was very well curated and the entries displayed technically and conceptually sound knowledge and thought. Architect Apurva highlighted how the competition acknowledged the area of writing and that displayed the roles and responsibilities of design-planning-architecture by this skill.

Follow IDHA Labs to read all the shortlisted entries and for more details on their competitions.

All images © of IDHA Labs.