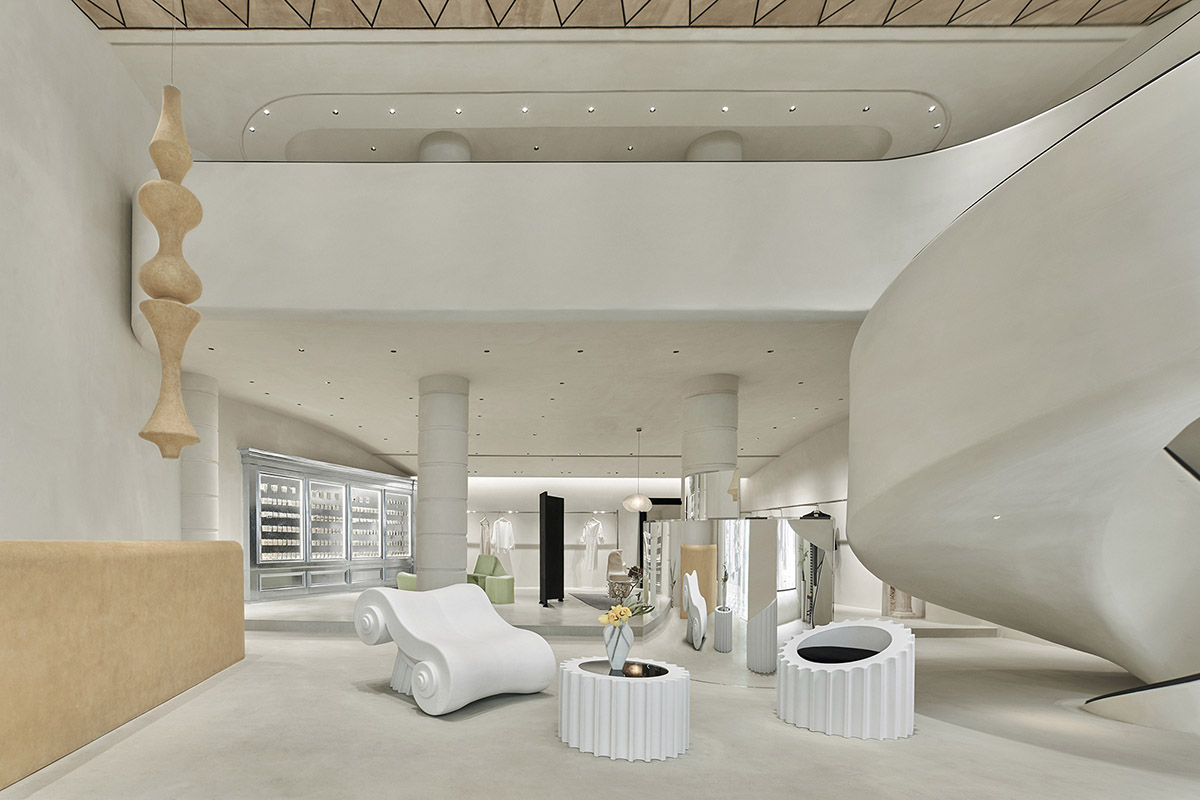 Named Maó Space, the store contains customized furnitures by using fiber glass, made the ceiling and walls with Xuan paper and built a spiral stairway of half storey height. 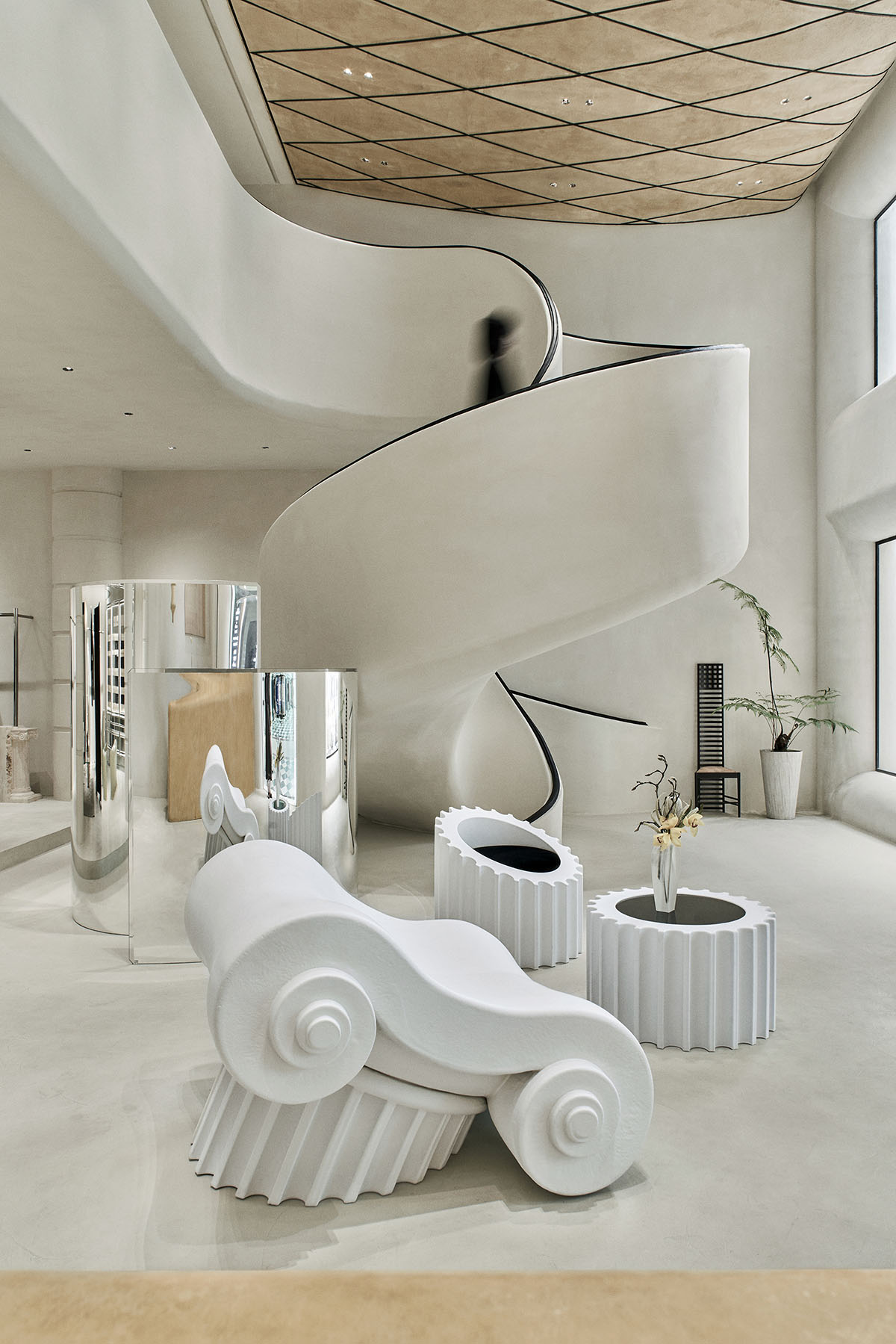 Not only this, in order to play with the idea of time being intangible, ofD has also picked the visually stunning sofa of Gufram, the black velvet mirror of Thomas & Vines, as well as the seemingly malleable chair of Olivier Gregoire.

Being in Maó Space, the studio have outstripped fads by making friends with time. 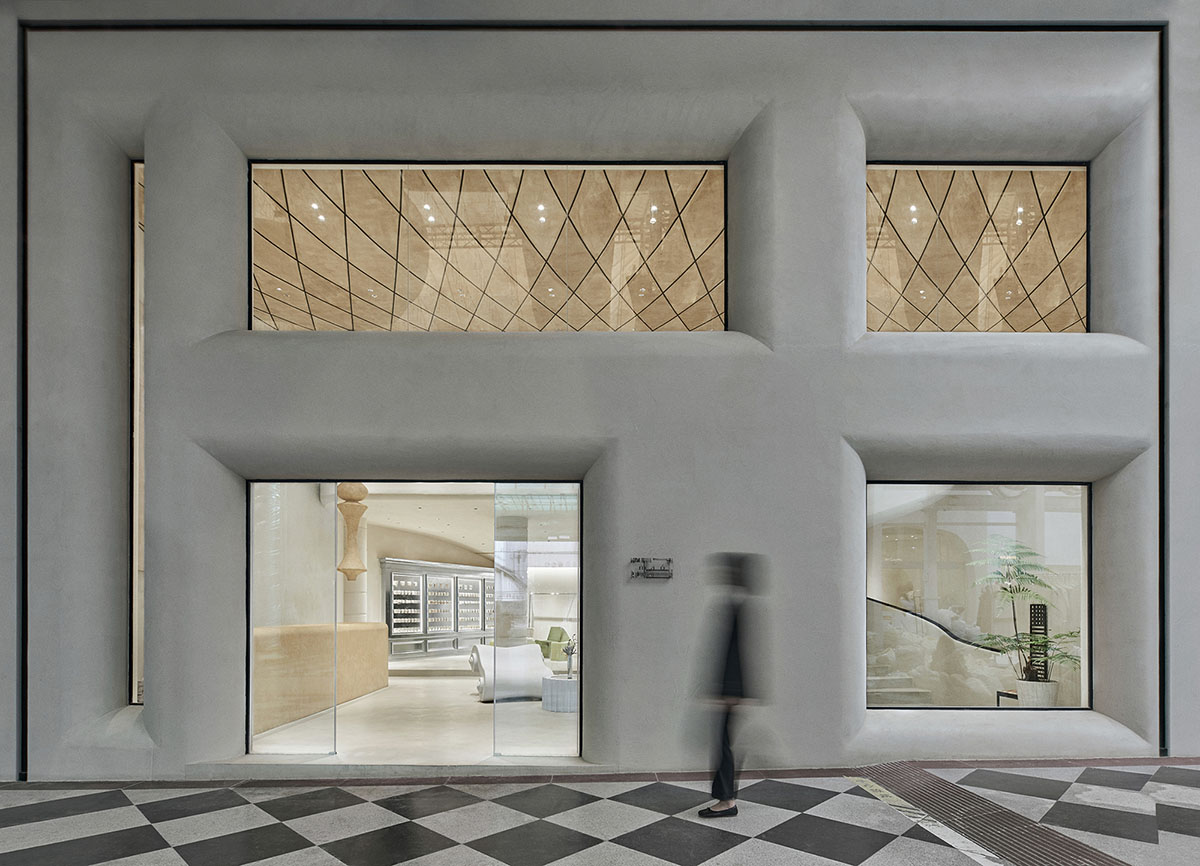 The project is located in an old neighborhood of steel structured ceiling and dark streets. ofD has the original enclosure space transformed into a much open and ventilated one while introducing the natural lights to interact with the interior lighting so as to expose the merchandise as much as possible.

The neat and asymmetric glass windows and door are in good contrast to the heavy material of the exterior wall, which imply the pace of time. 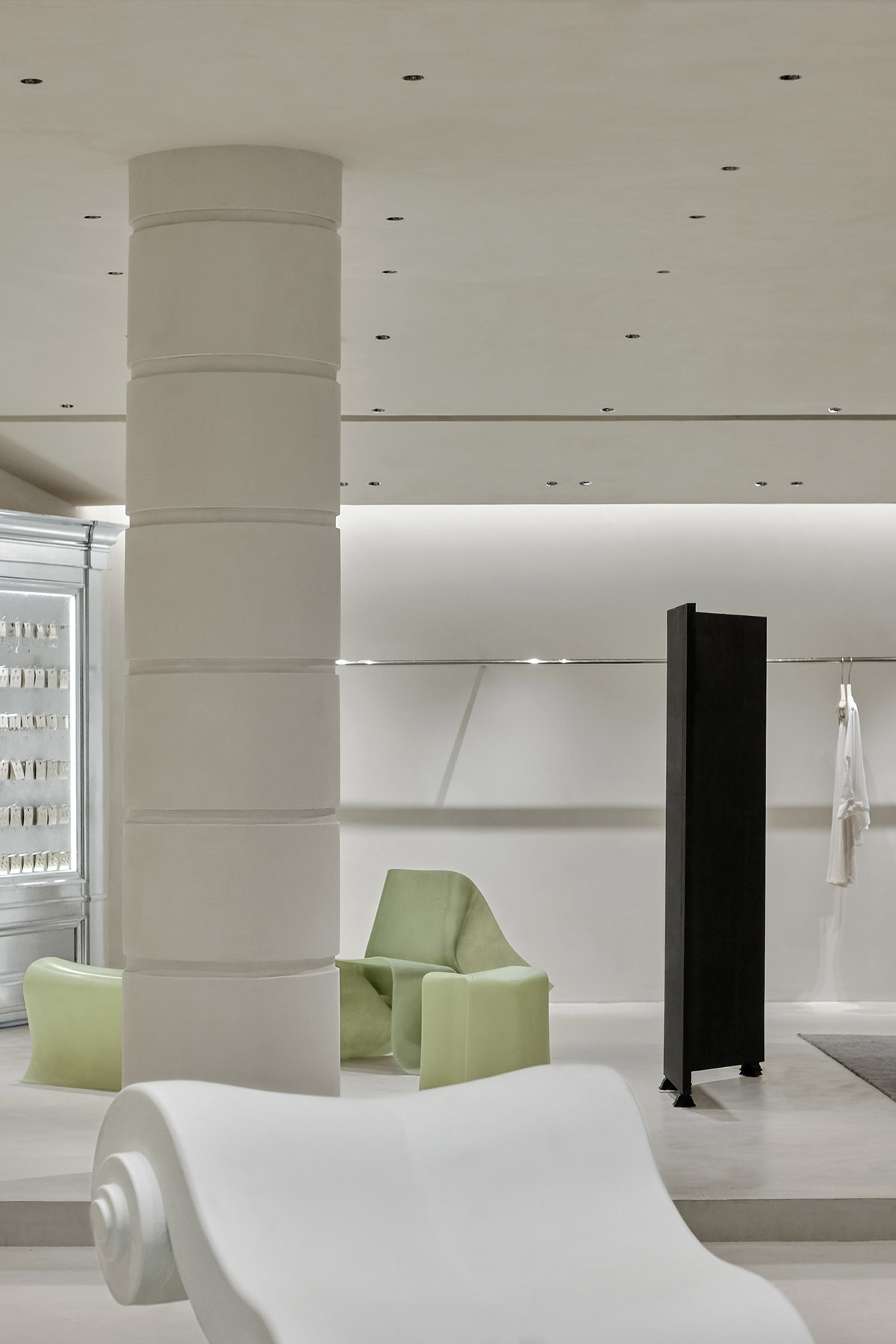 In accordance with the entire block, Maó Space only operates during the day and the store sign would remains unlit at night. 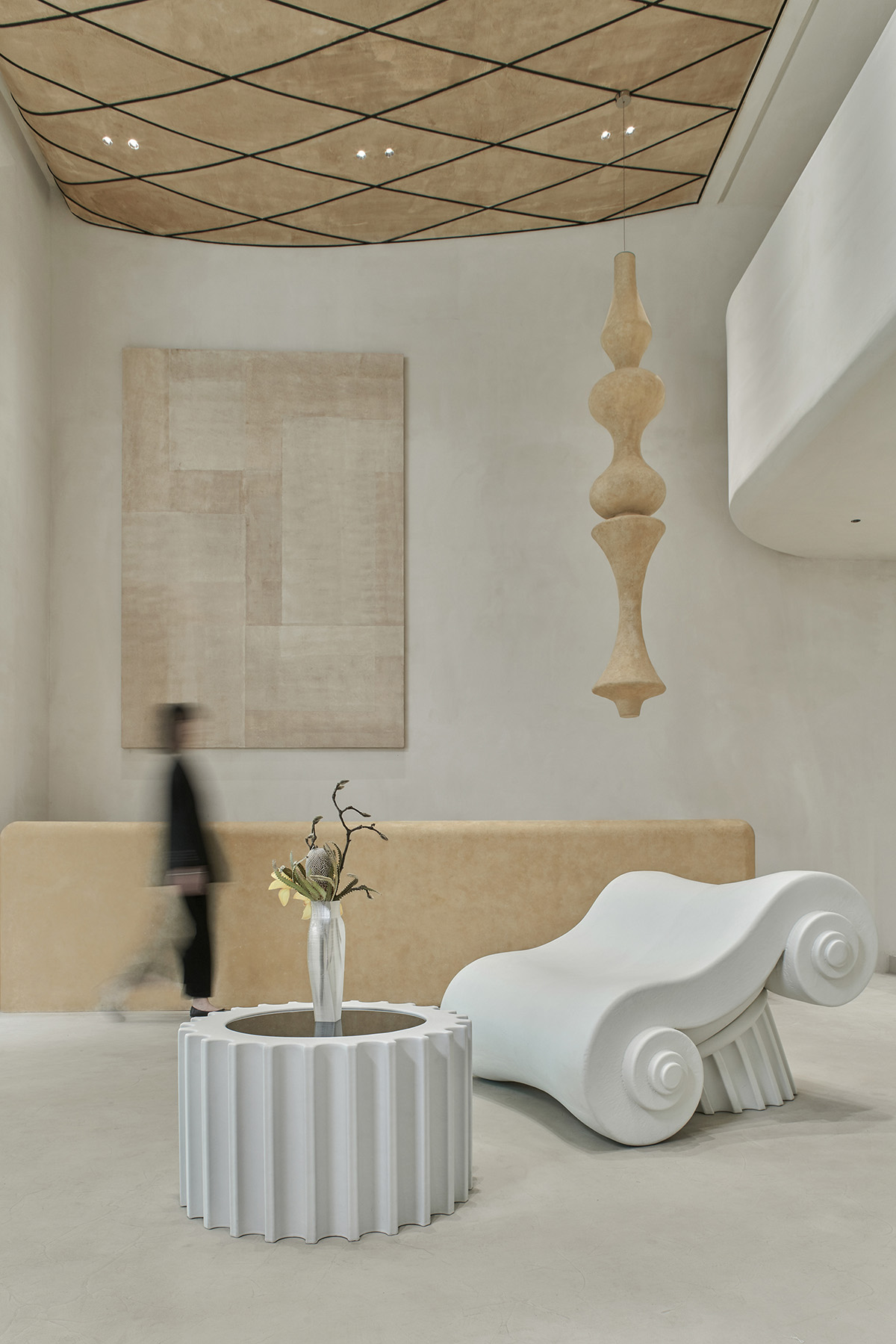 The Maó Space's logo is the wrongly marked intonation of its Pinyin spelling, which is the nickname of the owner-principal. You get the overview of everything once have entered the space. ofD has taken the "chaotic" atmosphere of the wholesale market into consideration as making this a trading space.

Grey is chosen as the tone throughout the loft space, its simplicity has played the appropriate background for the merchandise of great variety. In order to show the vestige of time, ofD has selected Xuan paper for the ceiling and decoration in the lobby, they have also customized the matching coloured fiber glass for the cashier and totemic chandelier. All the original but low keyed elements are well harmonized with the Gufram products.

The area of merchandise display and lounge are partitioned by a handmade heavy-inked screen. On the left, ofD has welded a Gothic styled cabinet by using galvanized sheets, which has perfectly set off the olive coloured furniture of Olivier Gregoire. 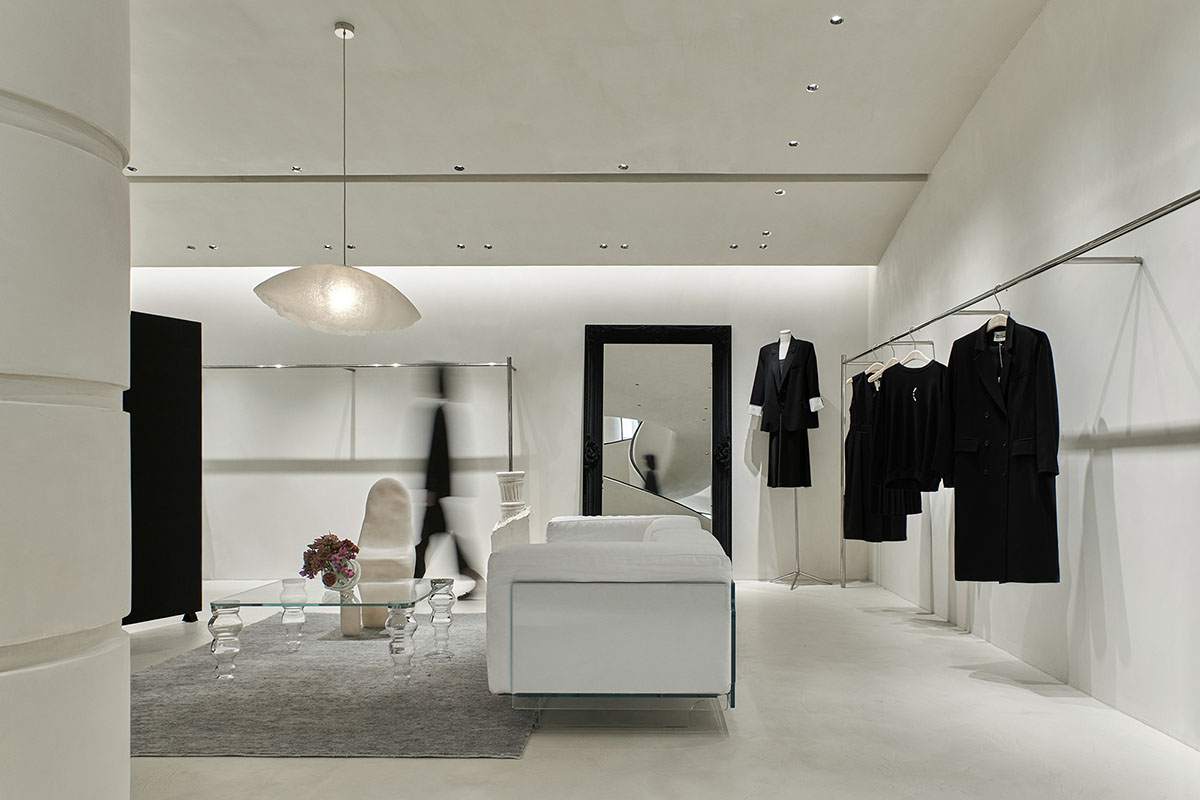 On the other side on the right, ofD has placed the glass tea table and sofa of Glas Italia, Thomas & Vines' mirror with the flocking frame and the fiberglass pendant lamp - PostKrisi 50-51 from Catellani & Smith.

The original cylindrical structure has been transformed into Mediterranean column, which has offered a distinct visual framework within the space.

The displaying rack is made with metal that signifies the industrial age and fractured plaster, this combination of materials has symbolized the passage of time. Just as Duchamp's Fountain has connoted, to have the bent and curved furniture of Olivier Gregoire in this grey toned space has suggested much more than what they actually are. 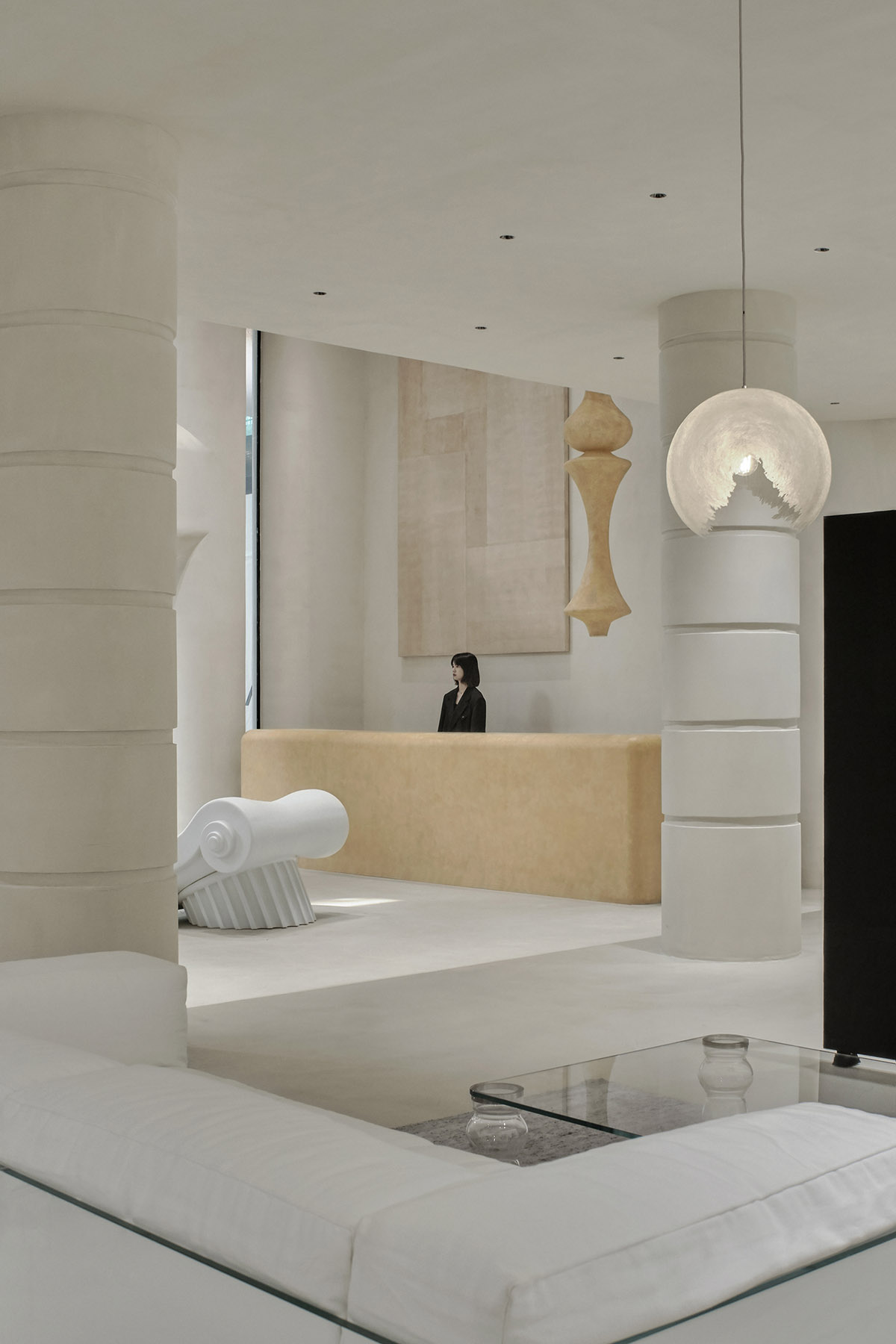 In this area, ofD attempts to take out any sharp angles, including the corner of the walls, the spiral stairway, the impractical curved mirror, the decorative and actual pillars etc., they hope to bring out the sense of classical time through the gentle details. 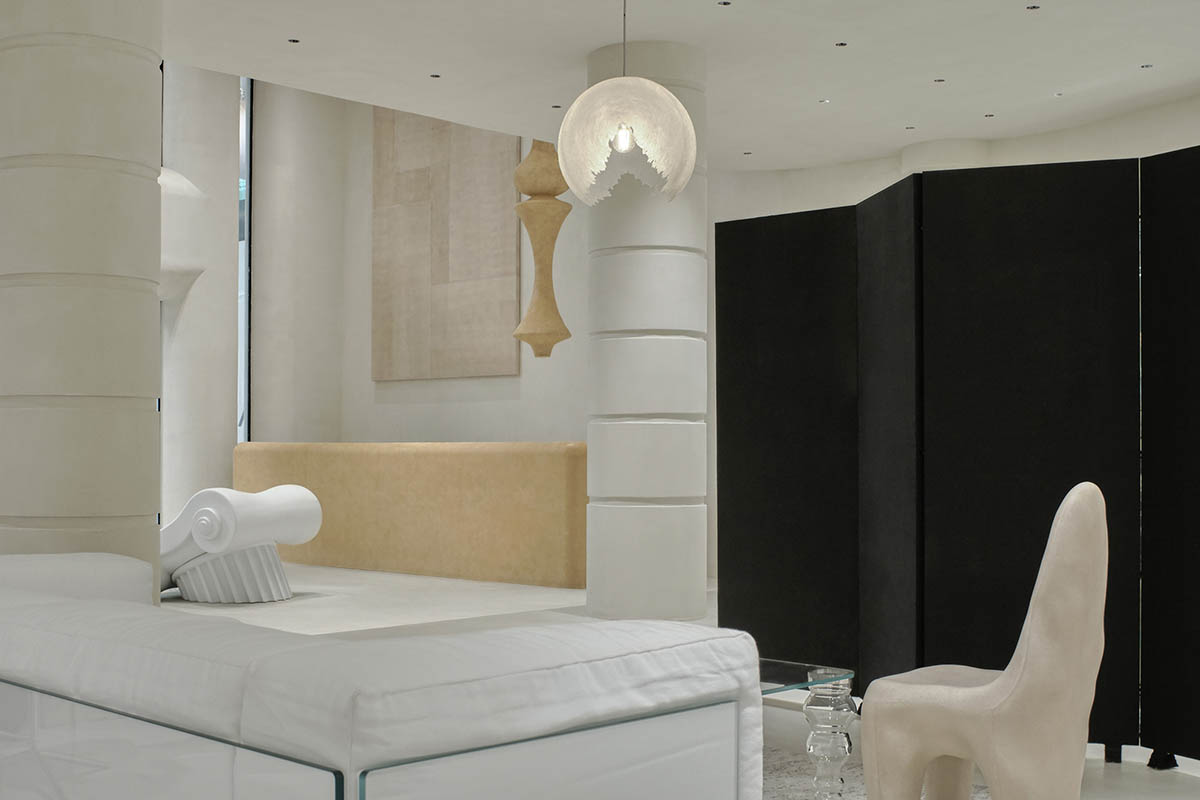 The column has been connecting the space of the two floors as a visual indication. The embedded black linear element on the grey toned spiral stairway has made a fine contrast with the black and white sofa set of Gufram. Fiberglass, metal and plaster column have once again joined in the same room. The owner is attracted by the linear flow of Oscar Tusquets' chair, but later realizes there's no matching table after the purchase. Therefore ofD has made a black table that represents the chess to go with it. 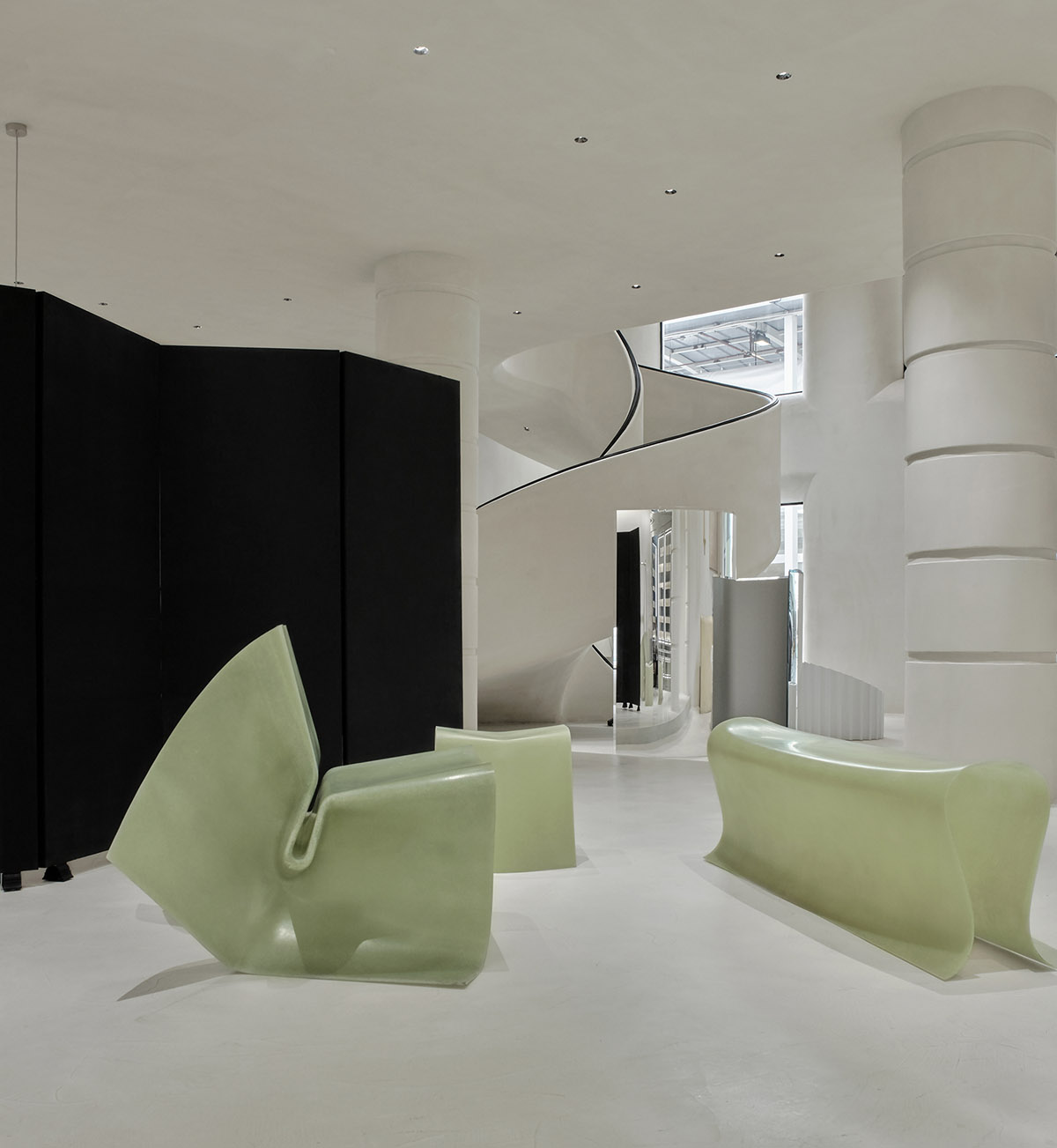 ofD has discovered another spatial dimension within this originally constrained and unmovable architectural structure. The second floor is an open space, and our sight would be outwardly led by the Xuan paper ceiling with grids that provides a visual depth. 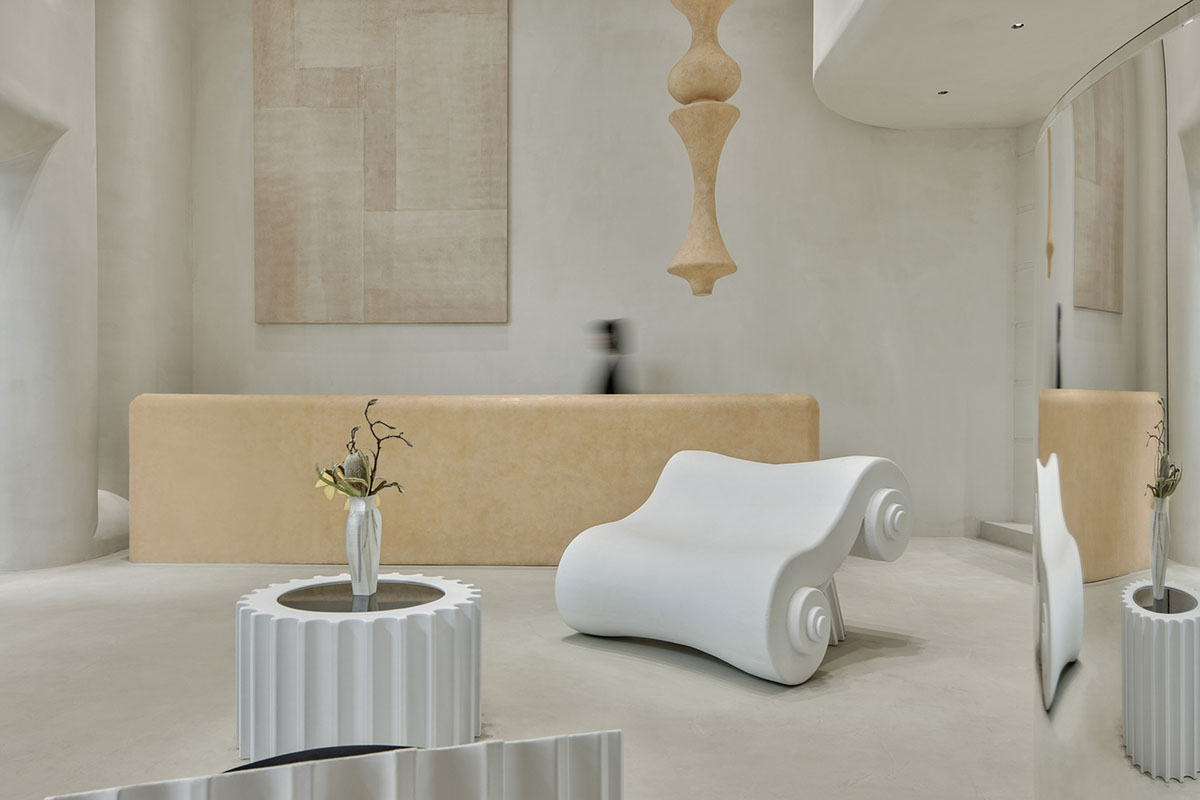 > via One Fine Day Studio & Partners