A Brick Sculpture To Work In: Satish Gujral-Designed Embassy of Belgium, New Delhi 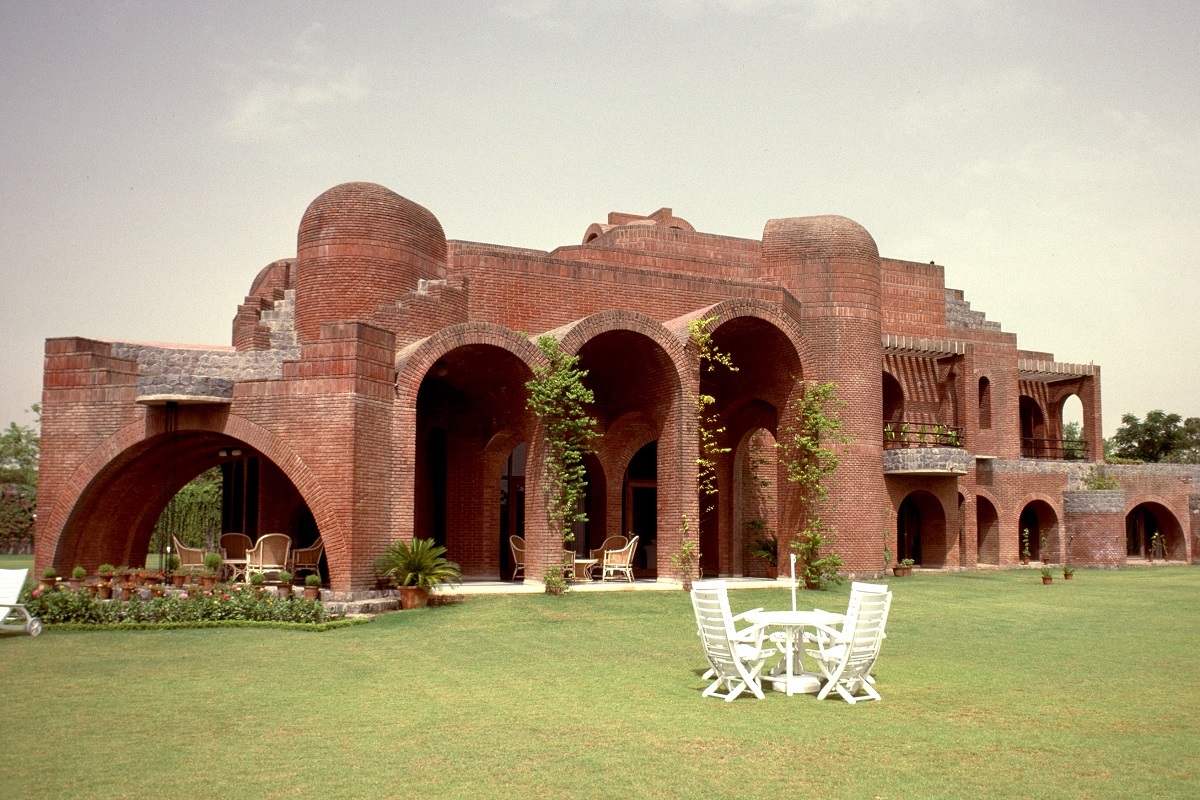 Satish Gujral - India's most versatile artist-turned-architect, painter, sculptor, muralist, graphic designer and writer left for his heavenly abode on 26 March 2020 at the age of 94. WAC published 'A Tribute' to this multifaceted personality on 29 March 2020. In this essay, the author touched briefly some architectural creations of Satish Gujral. During his four-decades of the architectural journey, Gujral designed many large scale buildings and complexes apart from several houses. Prominent among these are the Embassy of Belgium, New Delhi, India Islamic Cultural Centre, New Delhi, Indira Gandhi Centre for Indian Culture, Mauritius, Al-Moughtara Farm, Riyadh, Goa University, Goa, Computer Maintenance Corporation Office, Hyderabad, and Embassy of India, Kathmandu, Nepal. 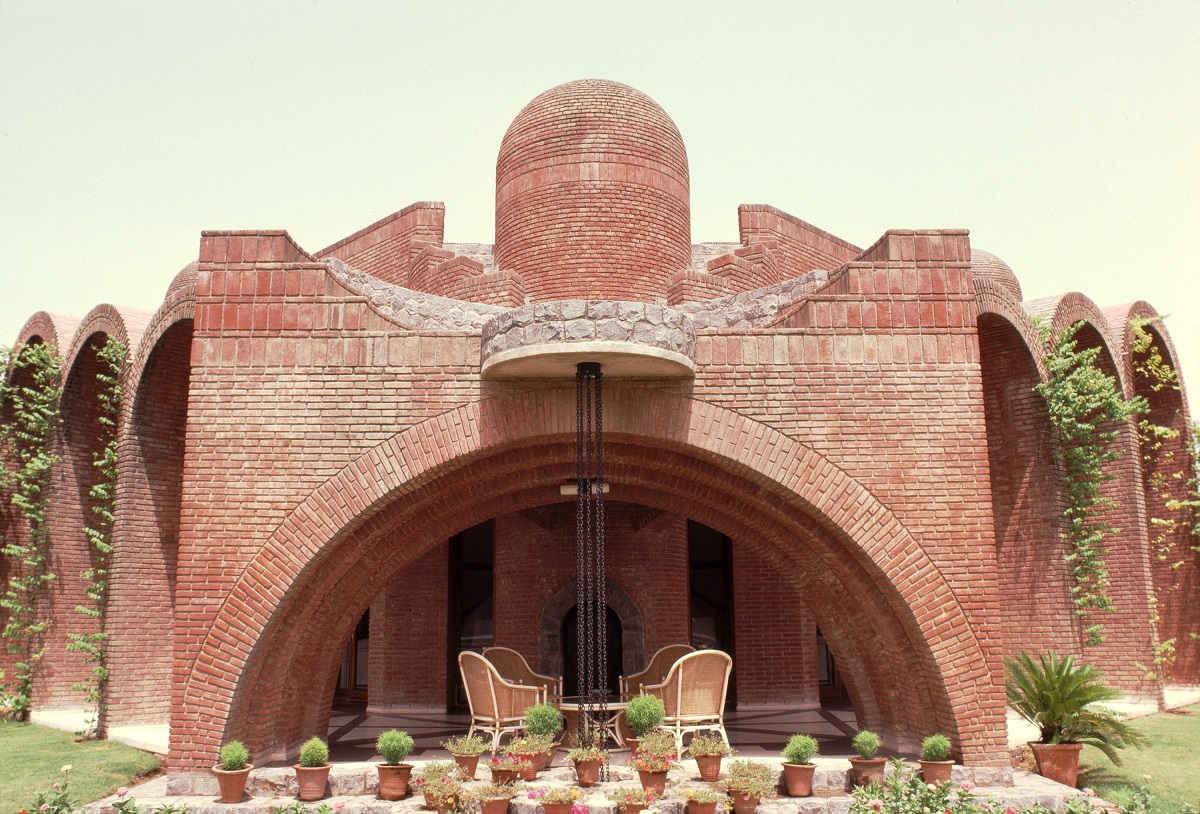 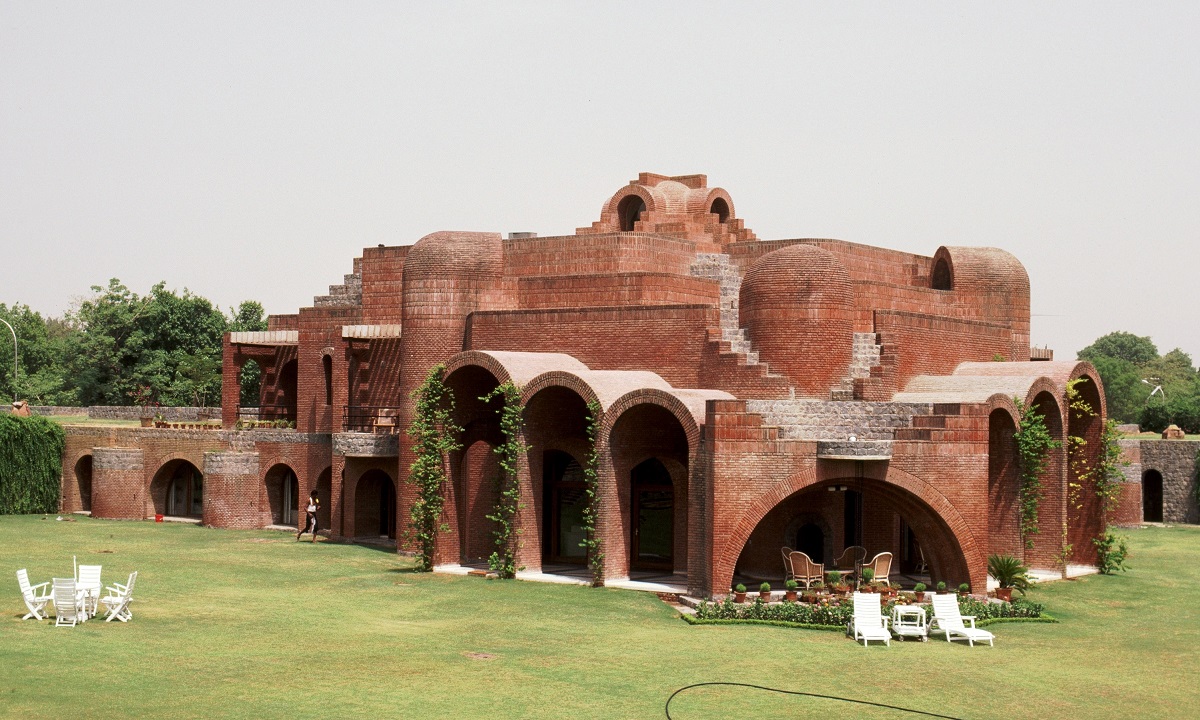 Out of these the Embassy of Belgium, New Delhi (1980-83) was Satish Gujral's first large-scale commission. Meticulously built in exposed brick, the design of this Embassy was selected by the International Forum of Architects as one of the 1000 finest buildings built in the 20th century around the world. Gujral was also awarded by the Belgian government with the 'Order of the Crown' for the innovative design of this Embassy building. This prestigious award was given for the first time to a non-Belgian architect. It was thus thought it appropriate to feature this building in detail for the ready reference of readers. 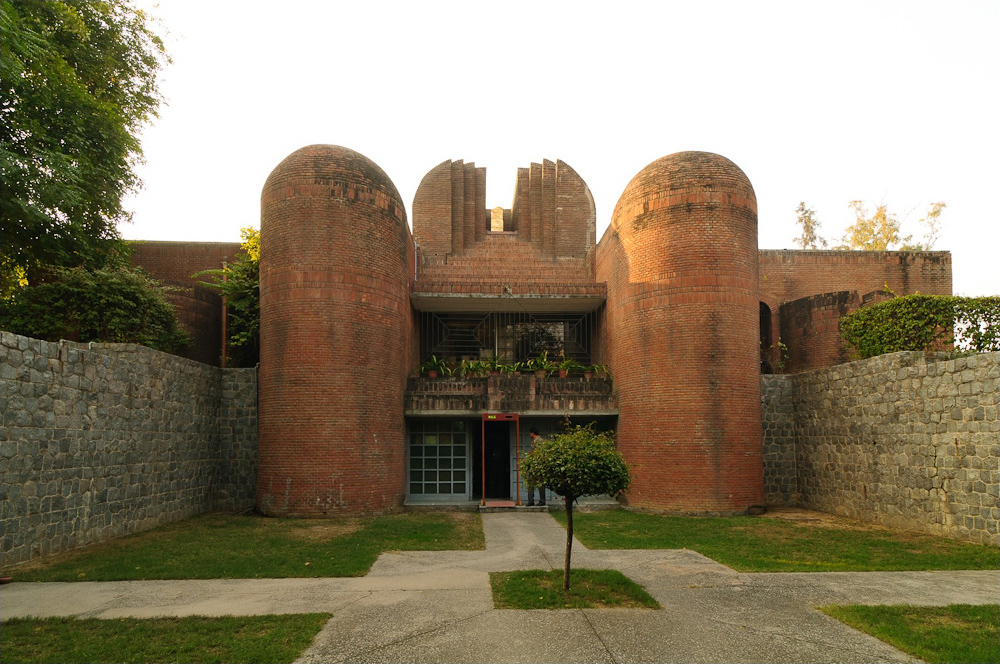 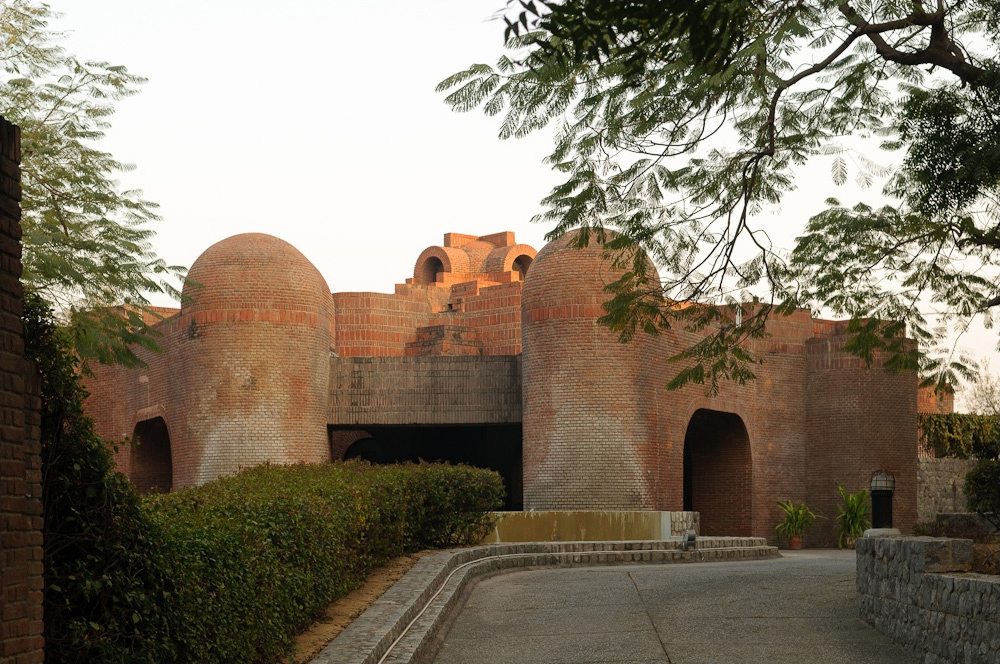 The campus of the Belgian Embassy is located on a 5-acre plot in a posh diplomatic enclave - Chanakyapuri in New Delhi. Though the land was allotted for the purpose in the 1950s yet the Government of Belgium didn't construct it for 30 years. Finally, when the Indian Government gave notice to the Belgium Government for the forfeiture of the land, the project saw the light of day. In an unusual daring step, the Belgian Government showed faith on the eminent Indian artist Satish Gujral (instead of some established architect) and commissioned him to design and build the campus of the Embassy. 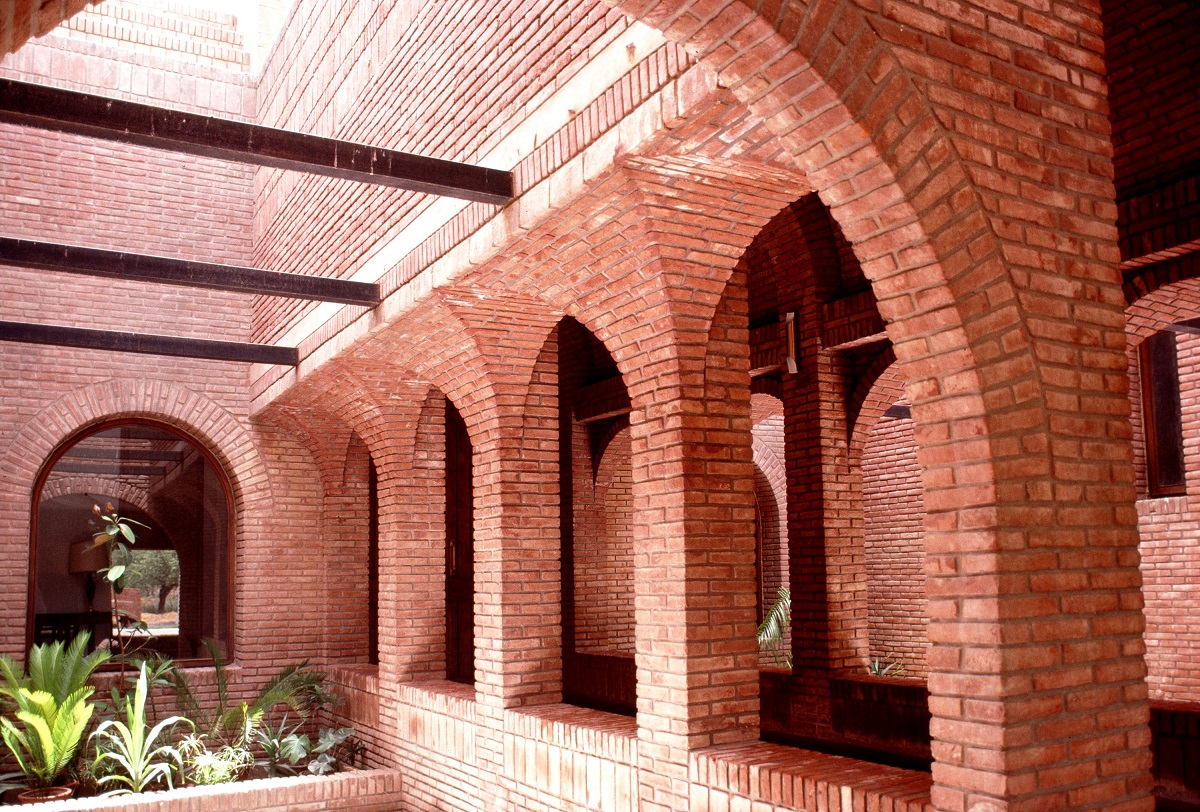 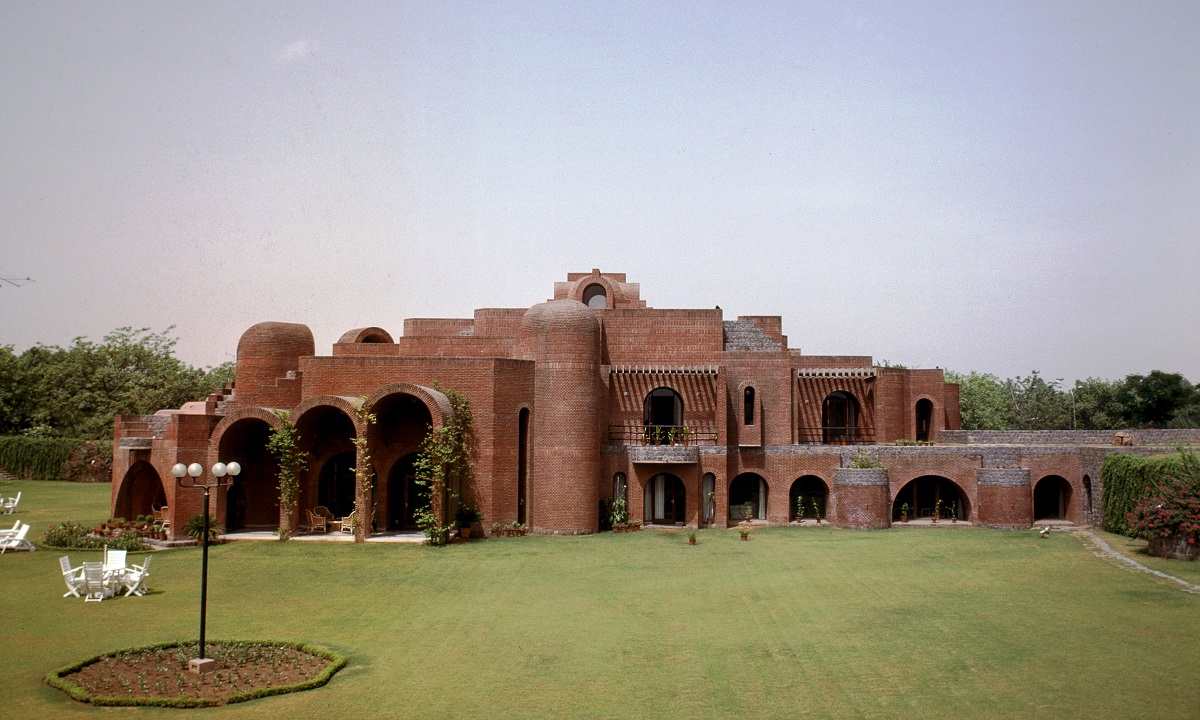 About the design process which Gujral adopted, he himself described, "When I began work on Belgian Embassy, I did not know what my approach should be: whether it should have an Indian character or a primitive strength or modern feel. I had not thought of architecture in intellectual terms. I just designed it through some kind of instinct and when I had finished I still did not know what I had done. As always with creative work, an artist is himself surprised by what he had produced." 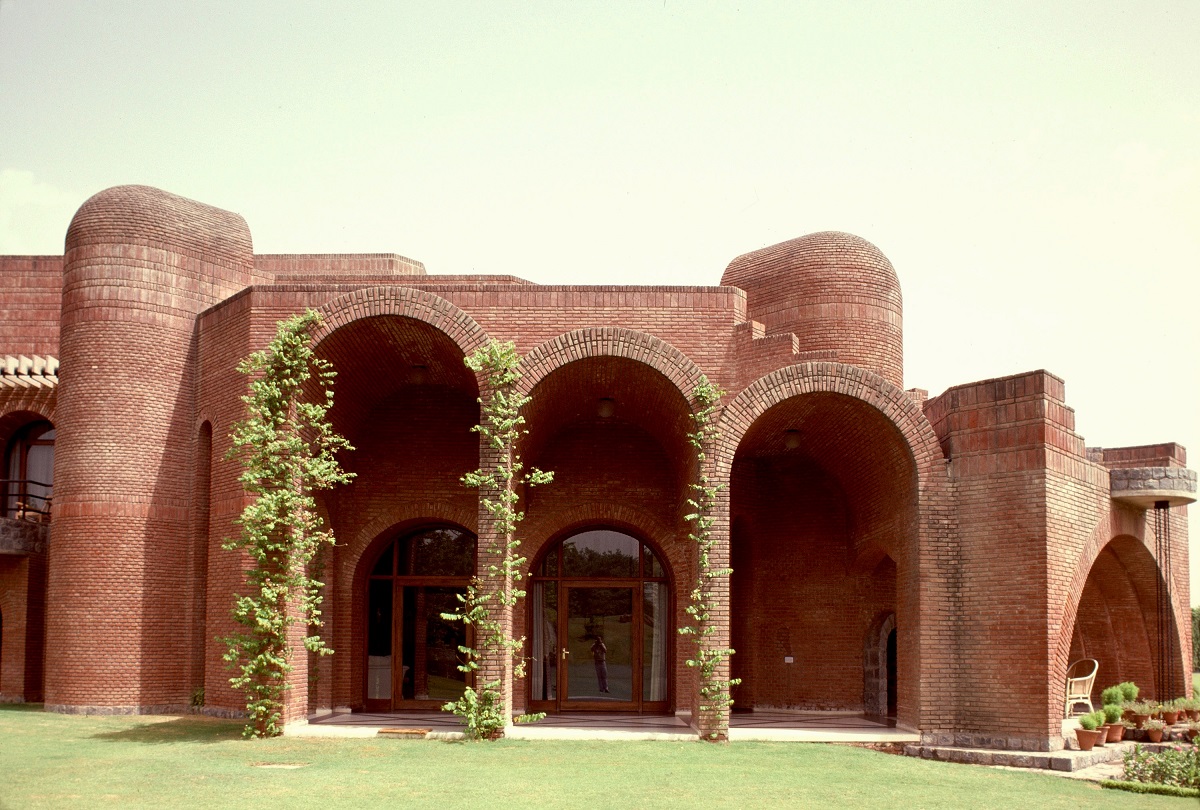 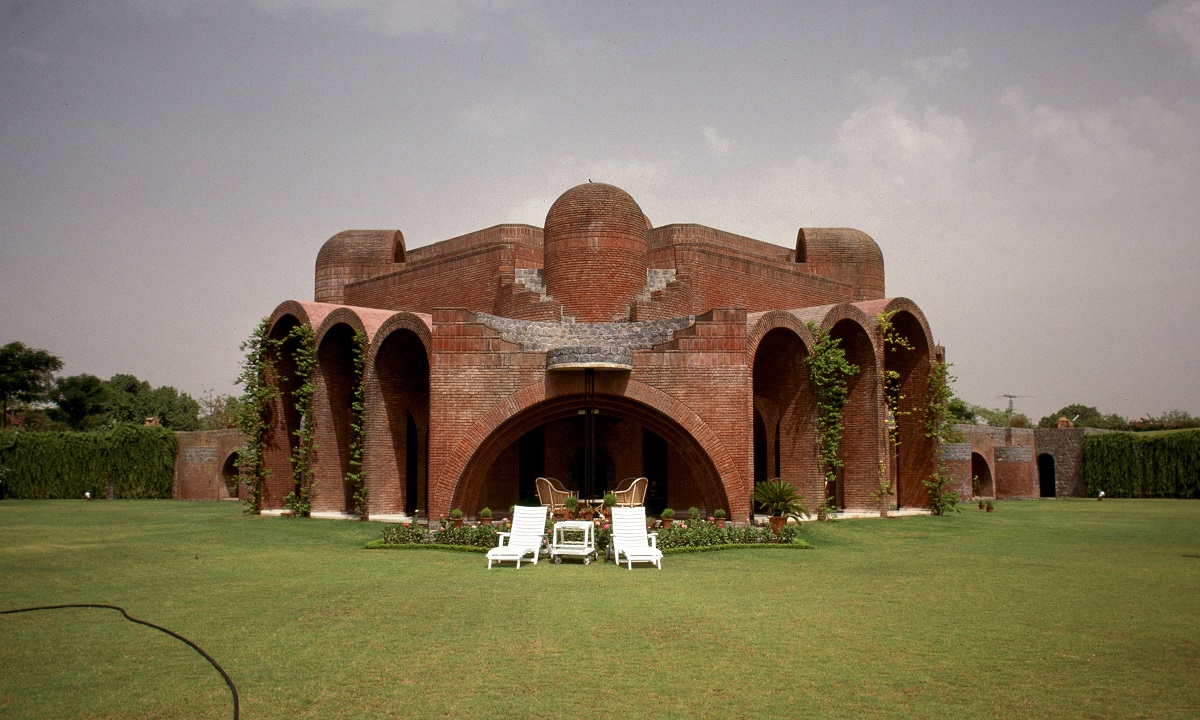 The scope of work initially given to the architect was to design and build the Chancery, the Ambassador's residence and servants' quarters. A Chancellor's residence and sunken tennis courts were incorporated later on. The almost triangular shape of the plot seems to have given the artist-turned architect a much better opportunity and challenge to show his creative ingenuity. The layout of the campus has been evolved along a central axis running north-west and south-east. The Chancery has been juxtaposed on the south-east side, parallel to the base-line of the triangular plot. The Ambassador's residence has been placed on the north-west side so as to fit-in the acute angle of the plot. Servants' quarters have been planned on the north-east side. 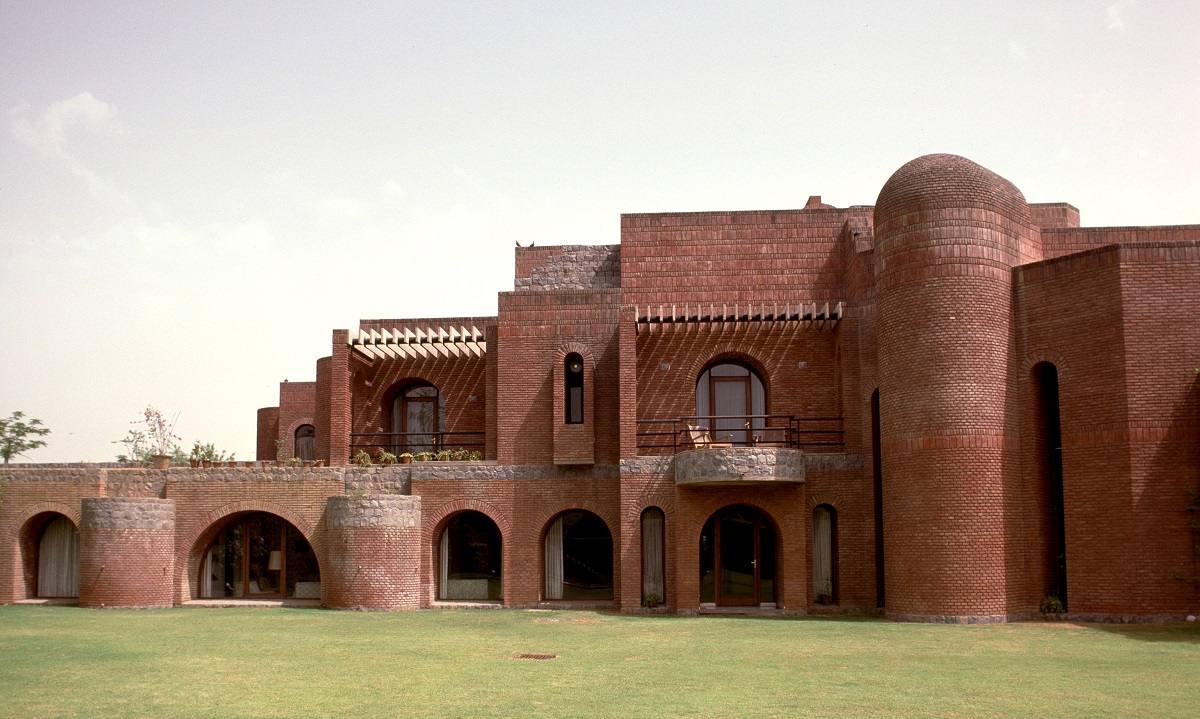 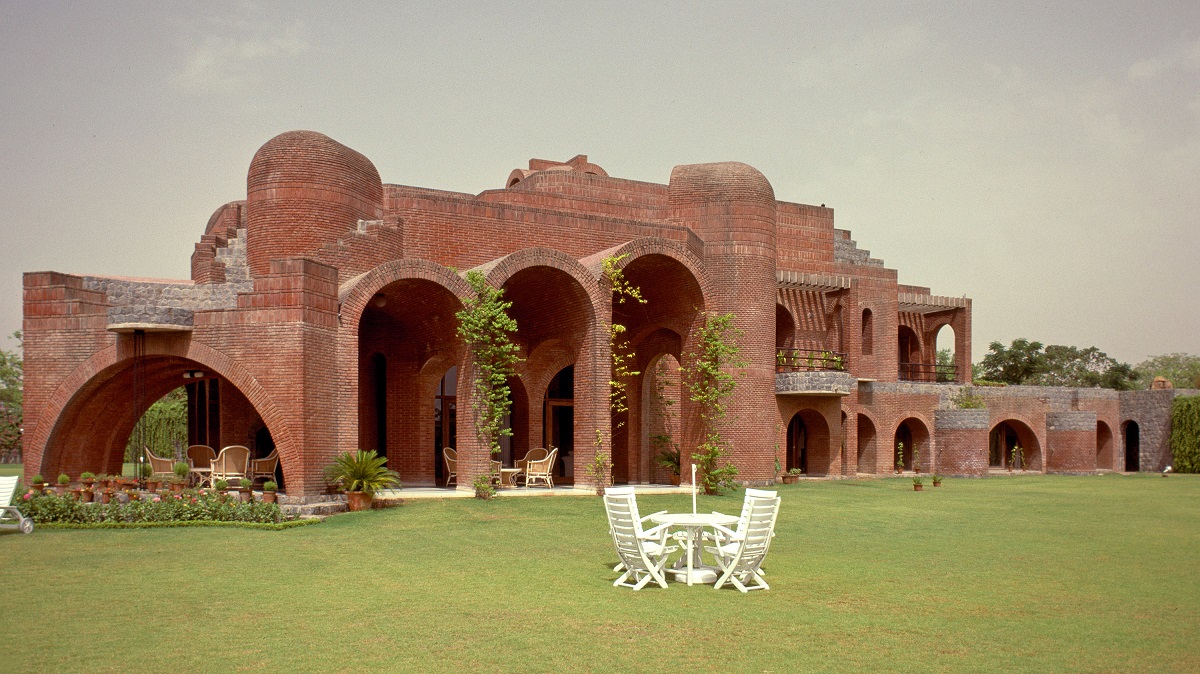 All these components have been arranged around a large central lawn. This lawn has been designed to give a feeling of sunken in the ground by enclosing it with coursed-rubble masonry retaining walls and raising the level of surrounding lawns along the periphery. Originally the entire site was flat and all the earth-fillings of raised lawns have been done as per architects master plan to achieve a homogeneous character. All the building components in exposed brick together with lush green lawns created at various levels add to the unique grandeur and organic character of the complex. 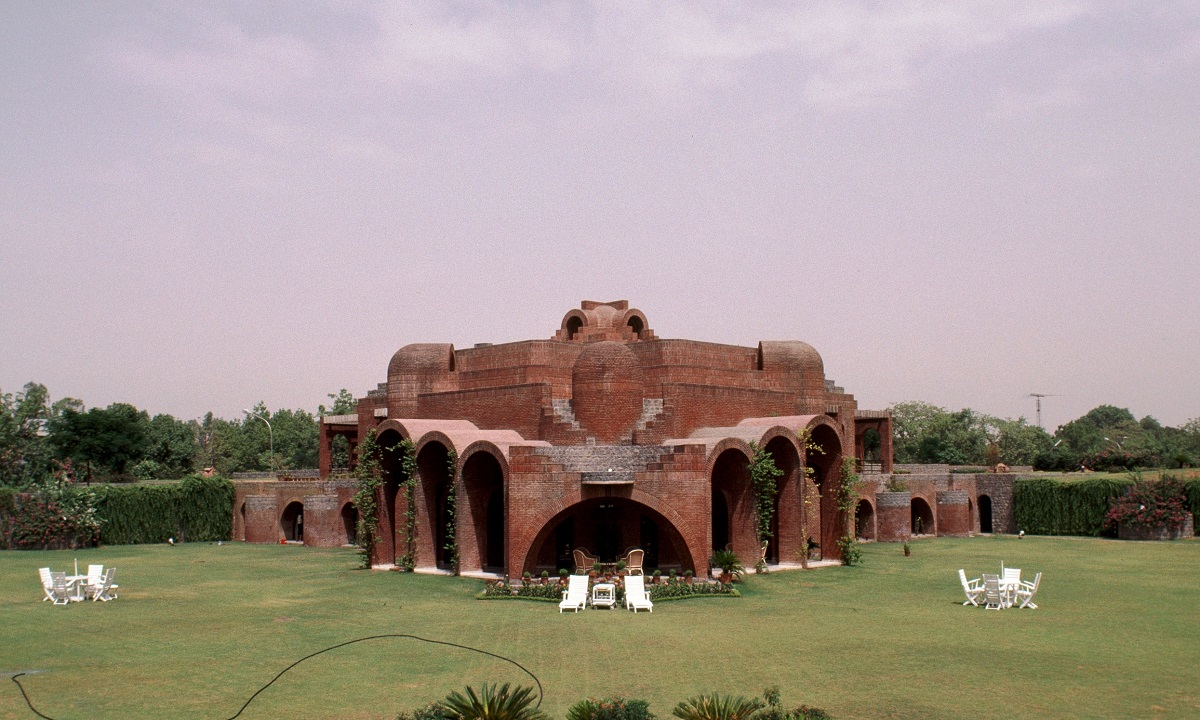 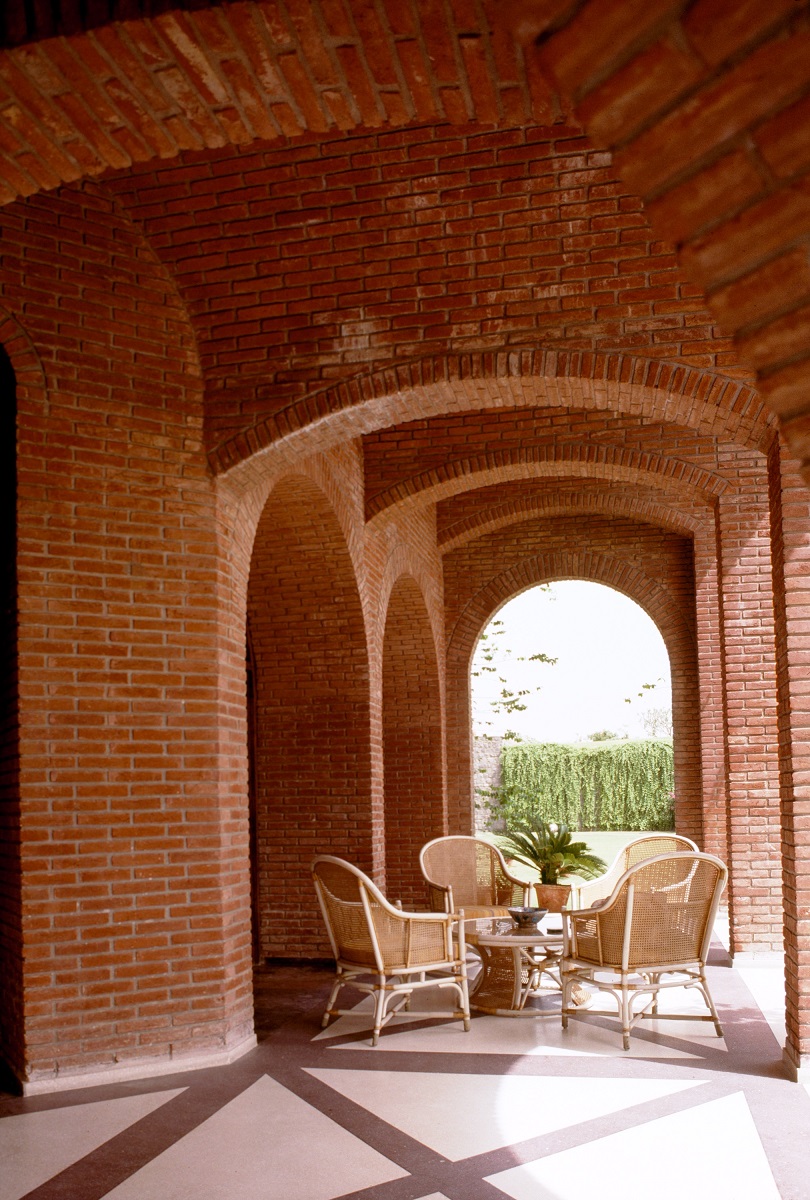 Satish Gujral based his design on the concept of organic architecture. As he himself explained, "The organic architecture is a design which places emphasis on the direct use of materials, the exposure of their surfaces, an and independence of all parts of the structure, with one another, as well as the sum total of parts and its relationship to the environmental setting. 'Organic' therefore implies logical and natural growth, harmony within the structure and a sense of belonging evident in the relationship of the building." 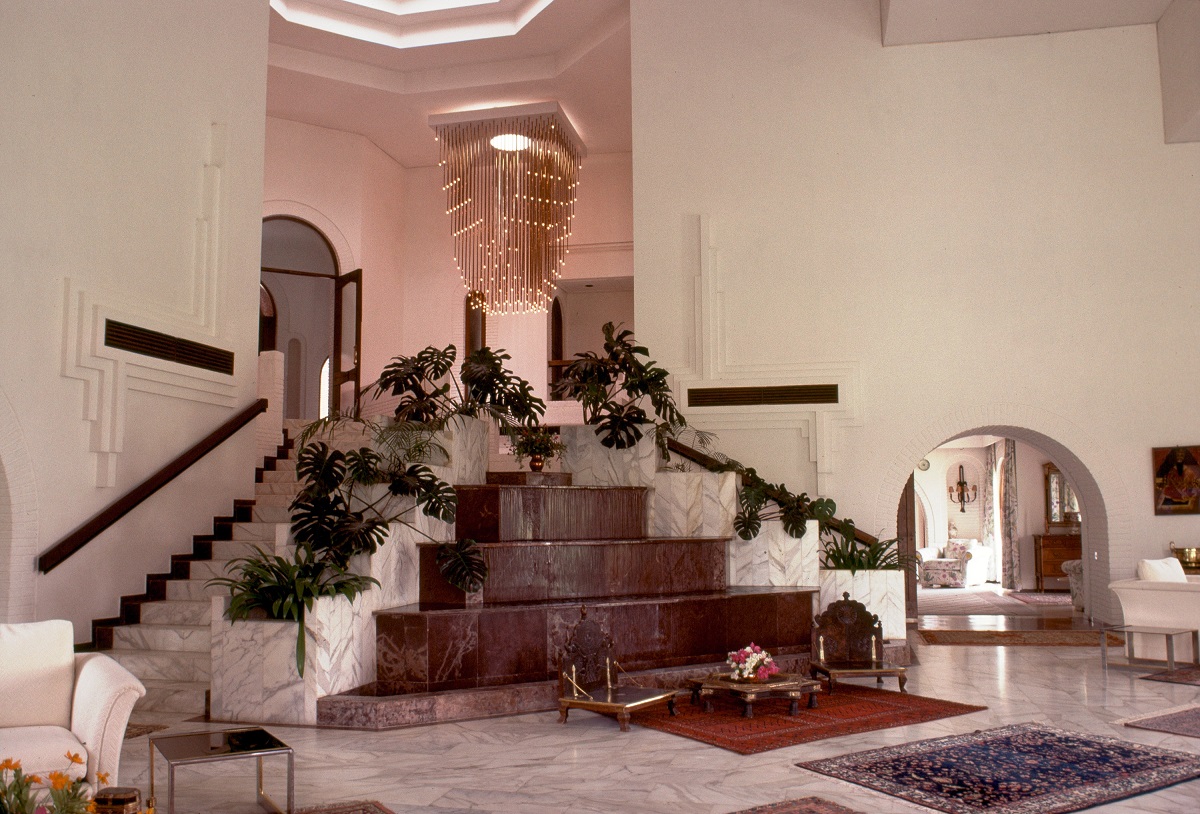 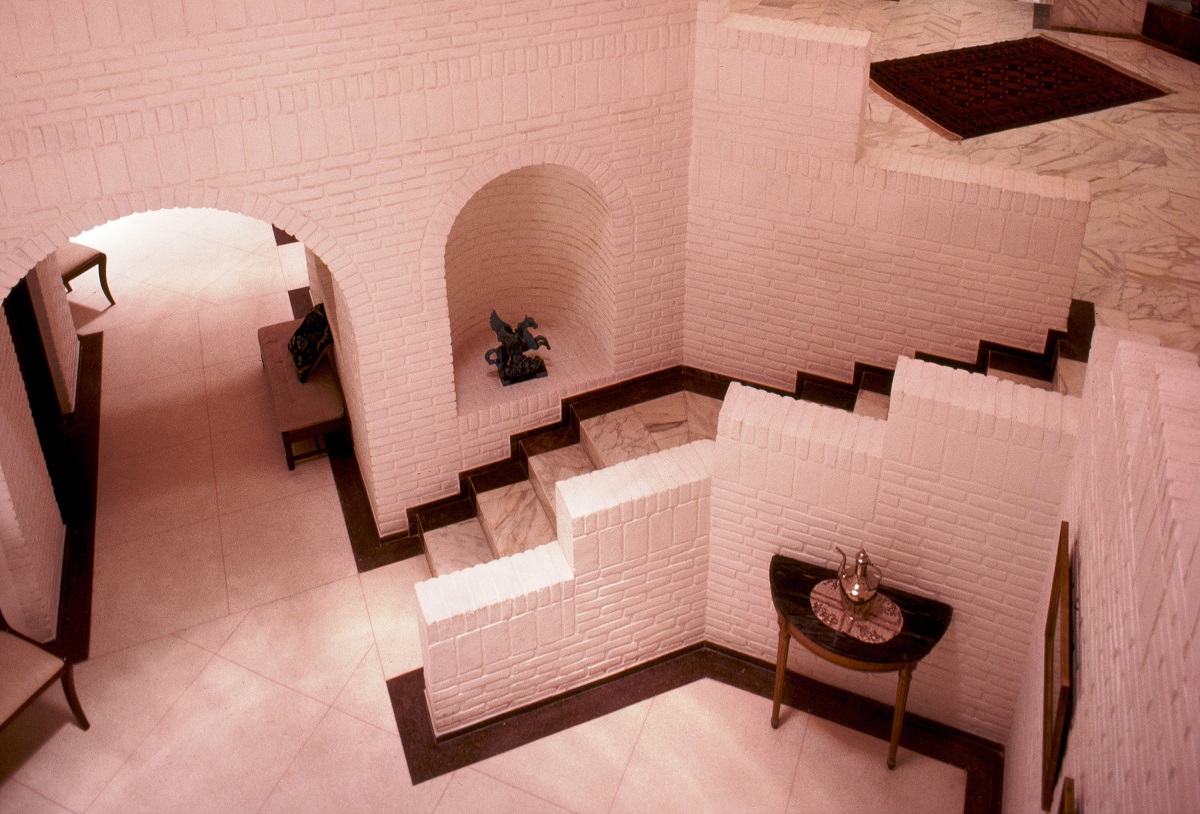 The architect thus placed each building in a manner that they are all independent yet tied together by a series of passages and landscaped courts, which is the binding force. Gujral further said, "The entire landscaping was man-made since the existing site was flat. This was necessary since it was the only natural solution to integrate the buildings. Also due to the size of the site, it was important to create private and semiprivate areas, in a way not to impose on the built-form."

The land rises in parts, forming upper-level gardens, gets cut-outs at parts forming tennis, also helps to conceal the servant quarters and at the same time protects them against the scorching heat of Delhi. Also, local materials were chosen and left exposed to create an organic ambience - born from things instead of superimposing on them. 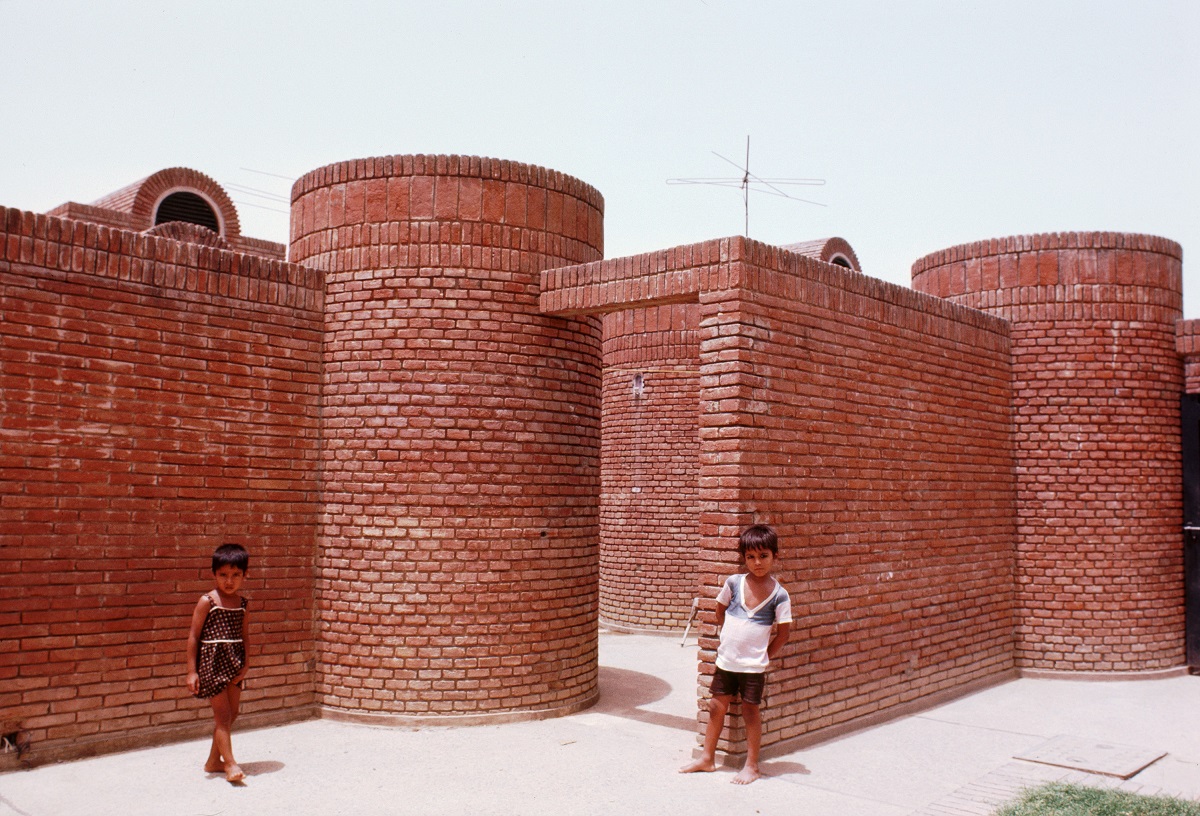 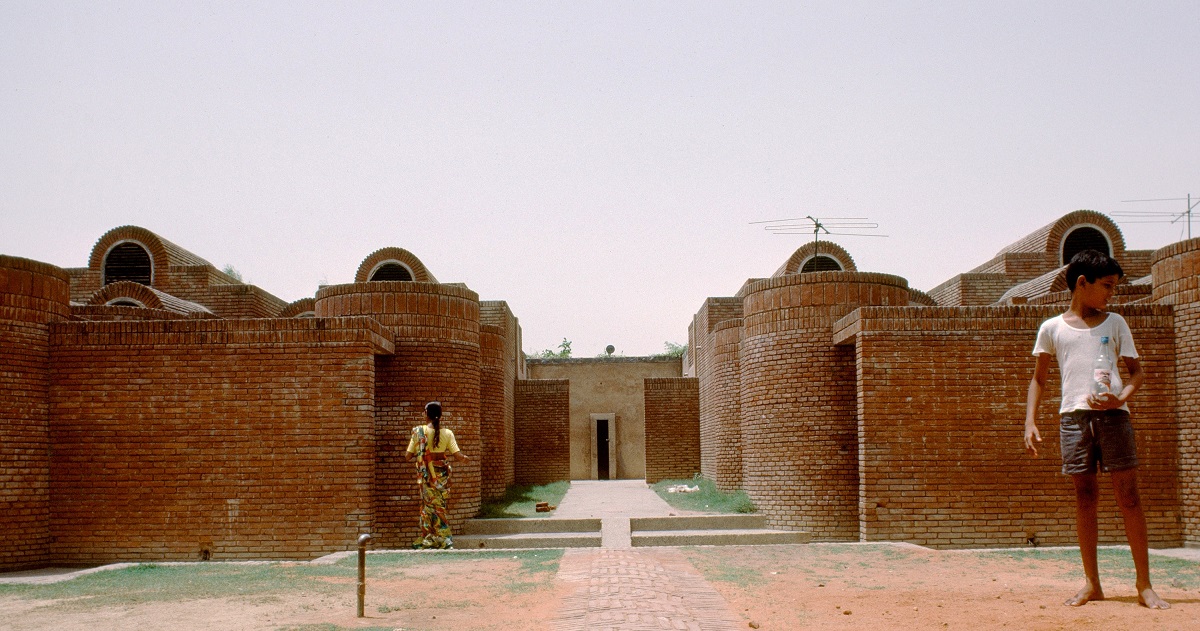 Gujral said, "I must admit that it was fortunate for me to be able to build this project myself on a turn-key basis, which gave me a tremendous opportunity to re-assess and re-design during the process of construction. The final result evolved through discriminative and constant choices while actively engaged. Since creative action, which makes up a work of art, is dependent upon an active involvement of the individual during the working process, flexibility is essential in taking advantage of newly-discovered relationships which may determine new responses or intuitions that frequently change the initial visualisation." 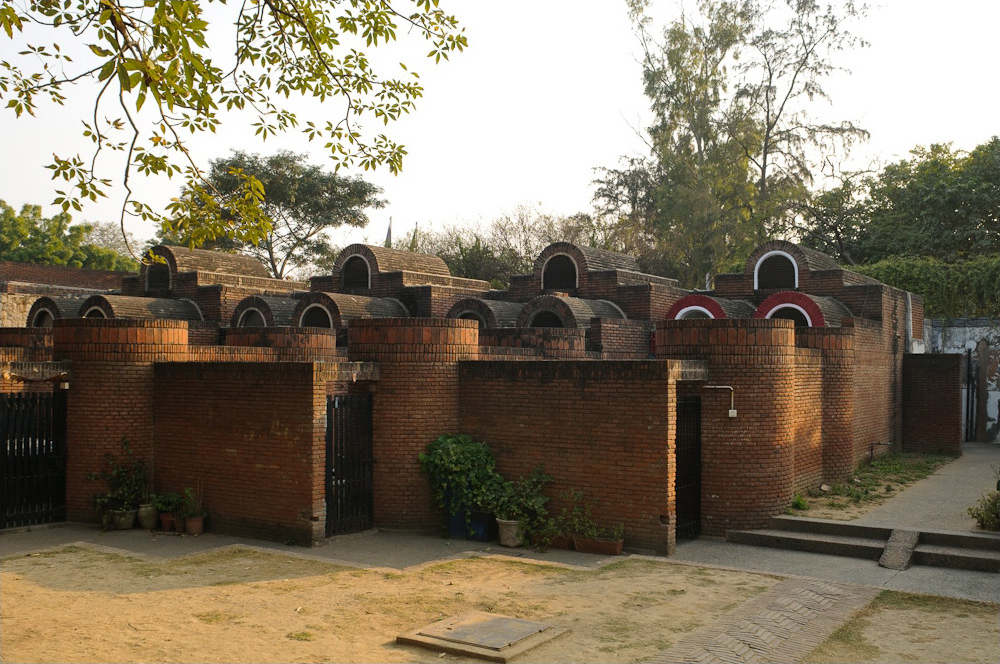 All the building components in the complex are designed to look like sculptures rather than buildings - an obvious response from a sculptor. The exposed brick-facades of all buildings are ingeniously punctuated with well-crafted brick arches, window openings, domes and skylights of varied sizes that let in natural sunlight.

With the design of this complex, Satish Gujral has not only continued the rich Indian tradition of building in brick but also has attained a new level of excellence in brick architecture. 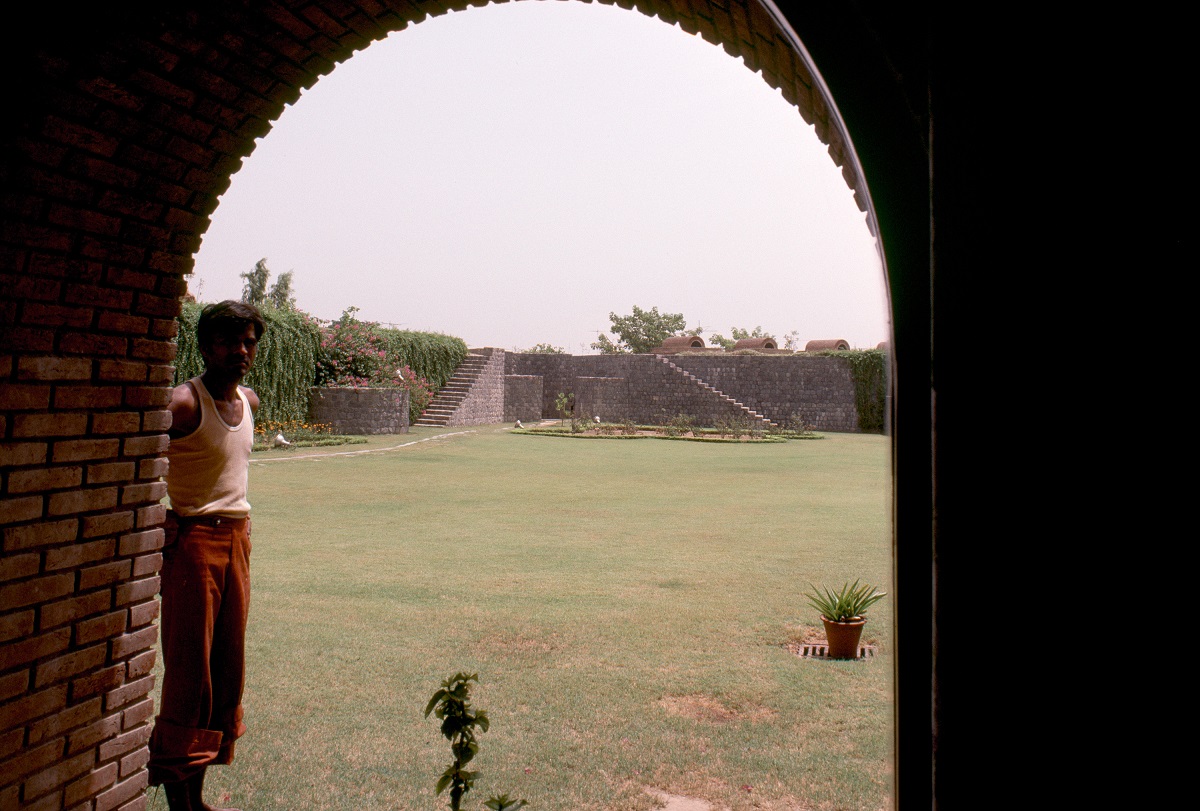 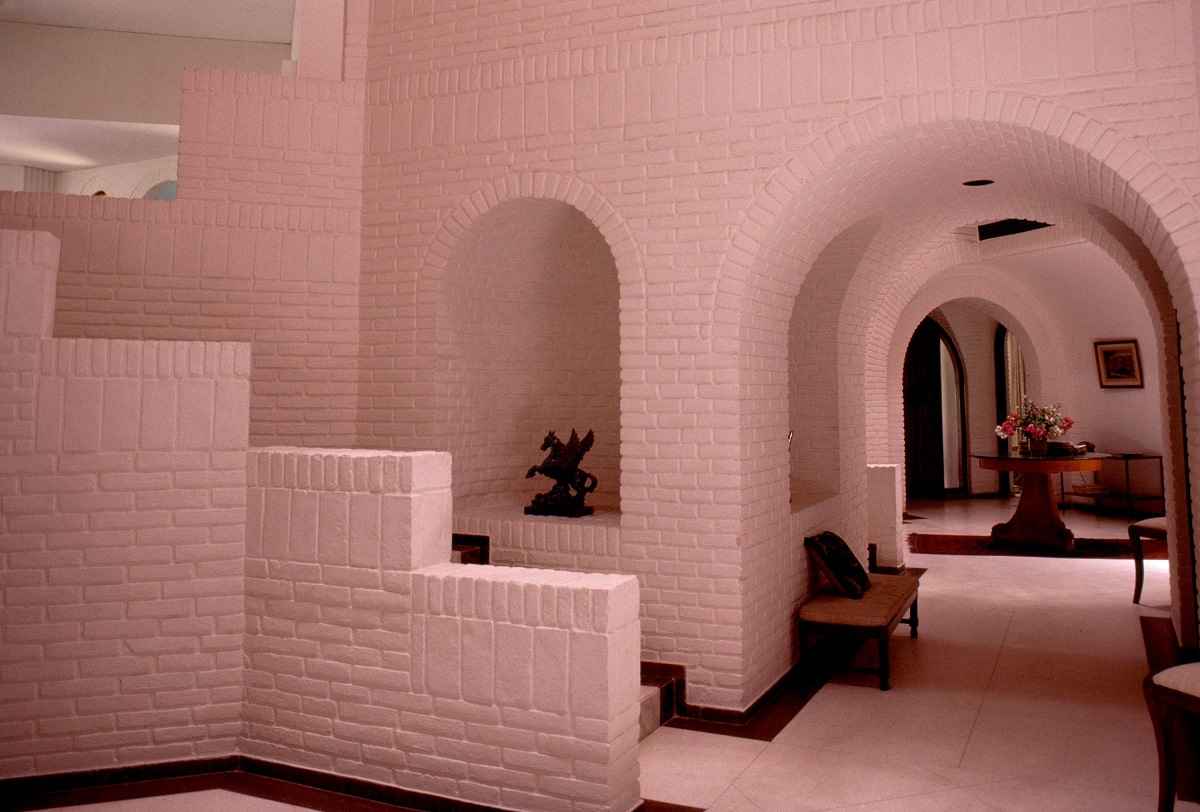 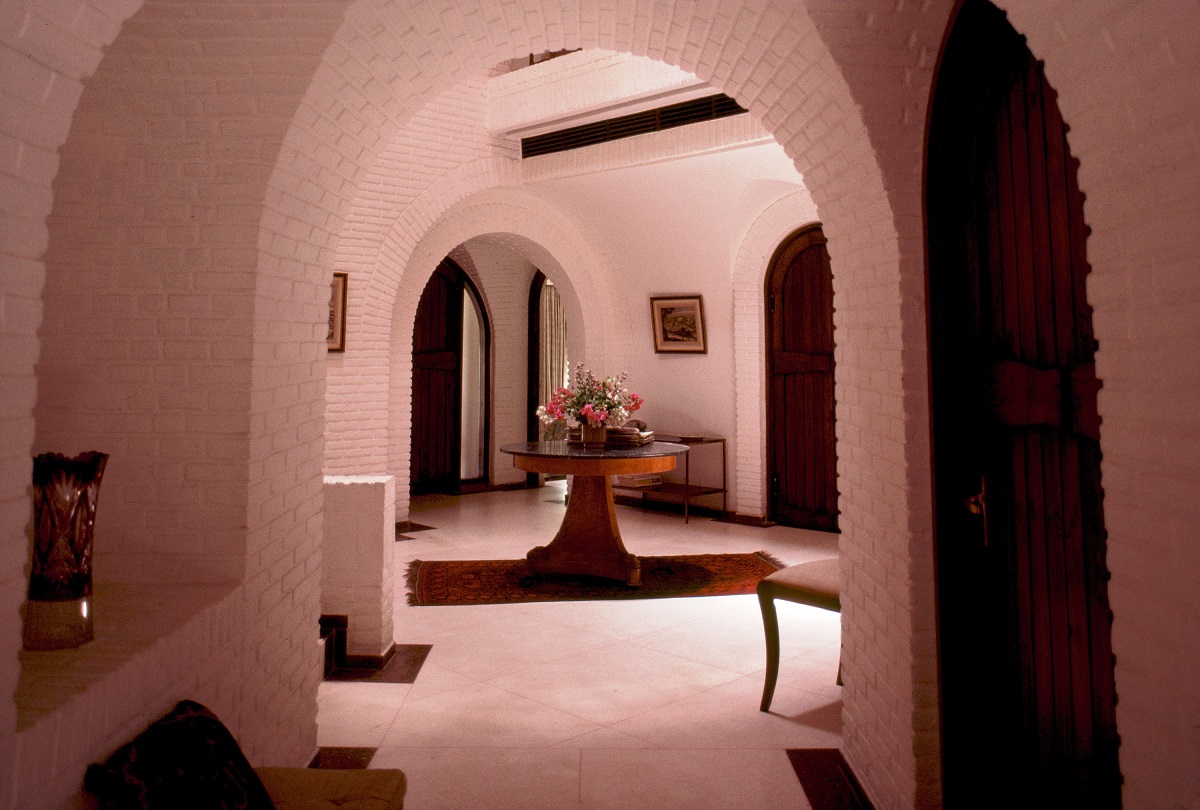 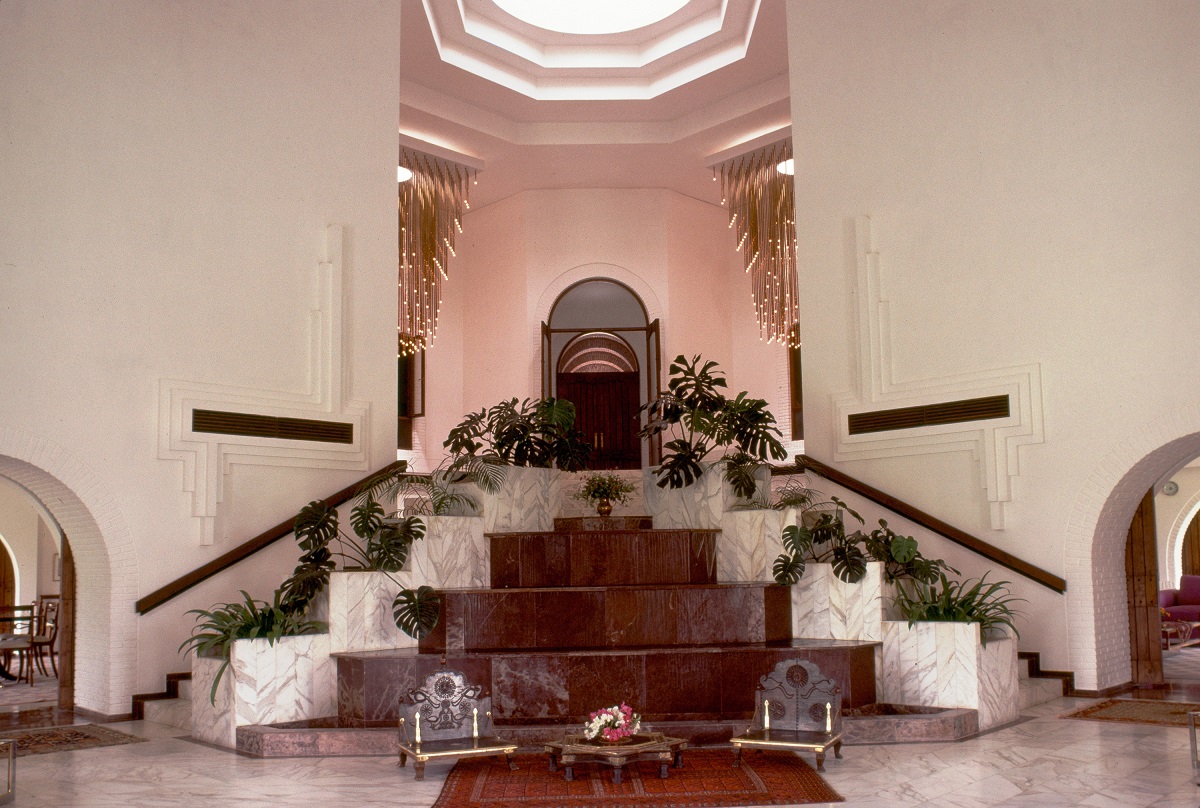 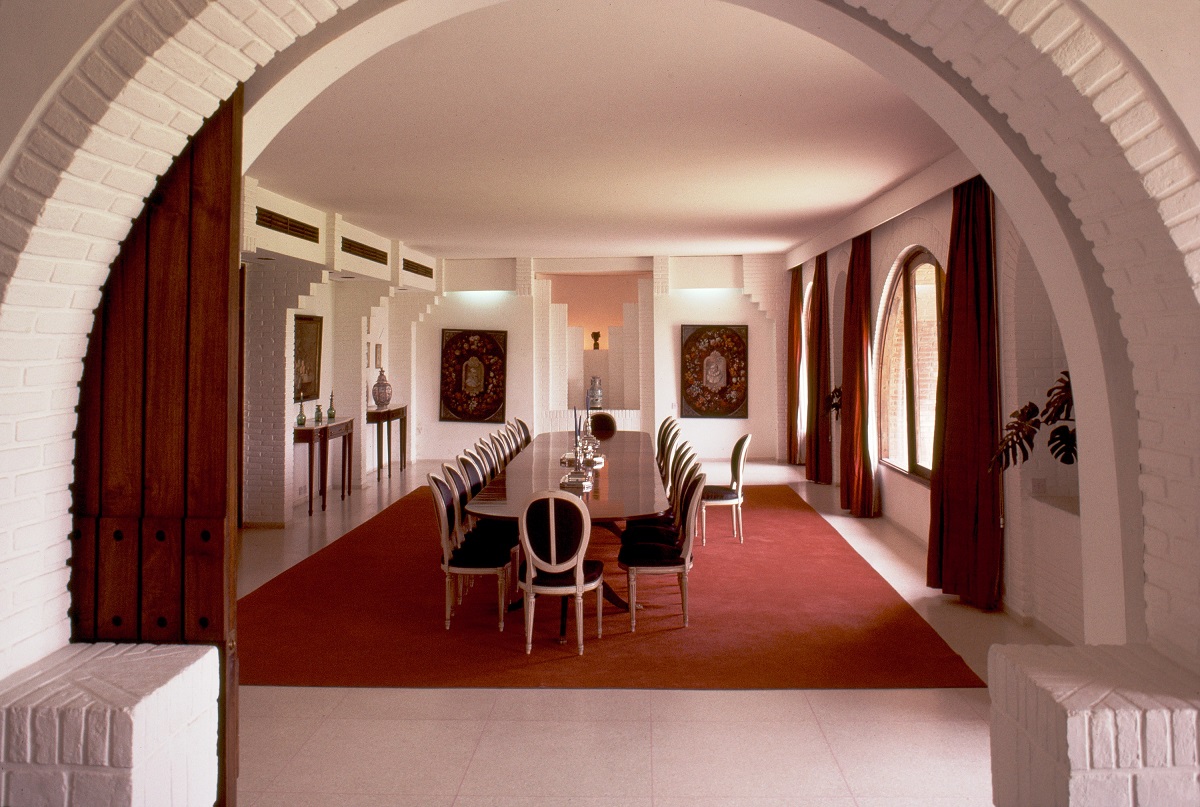 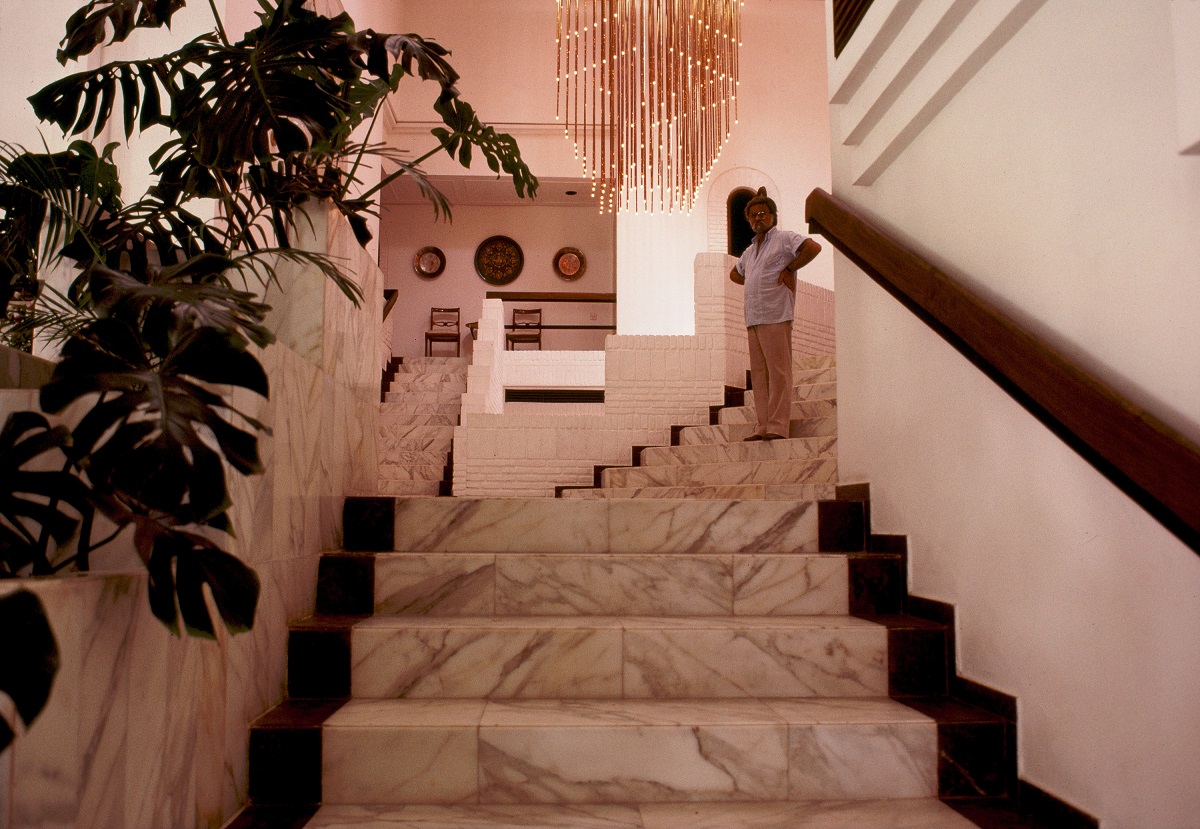 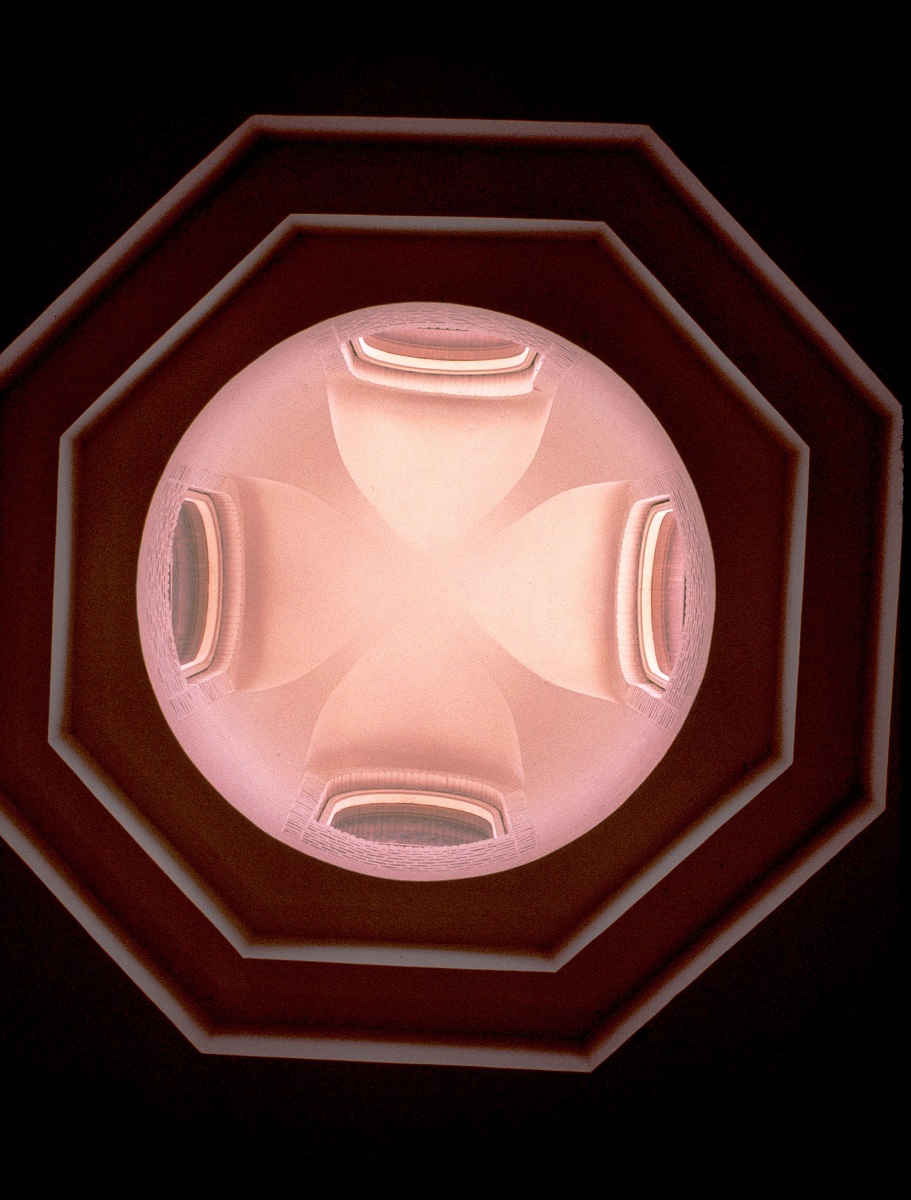 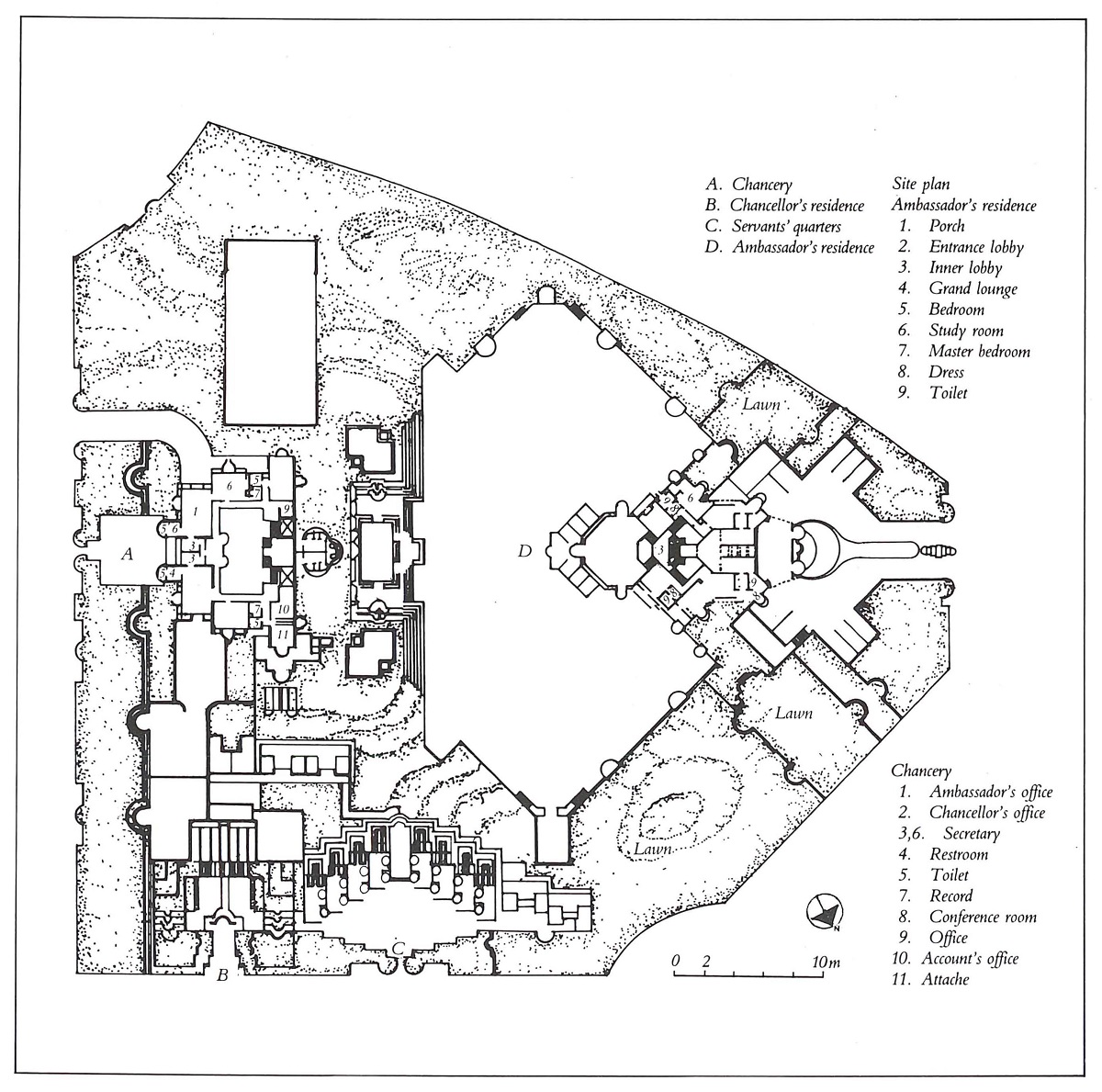 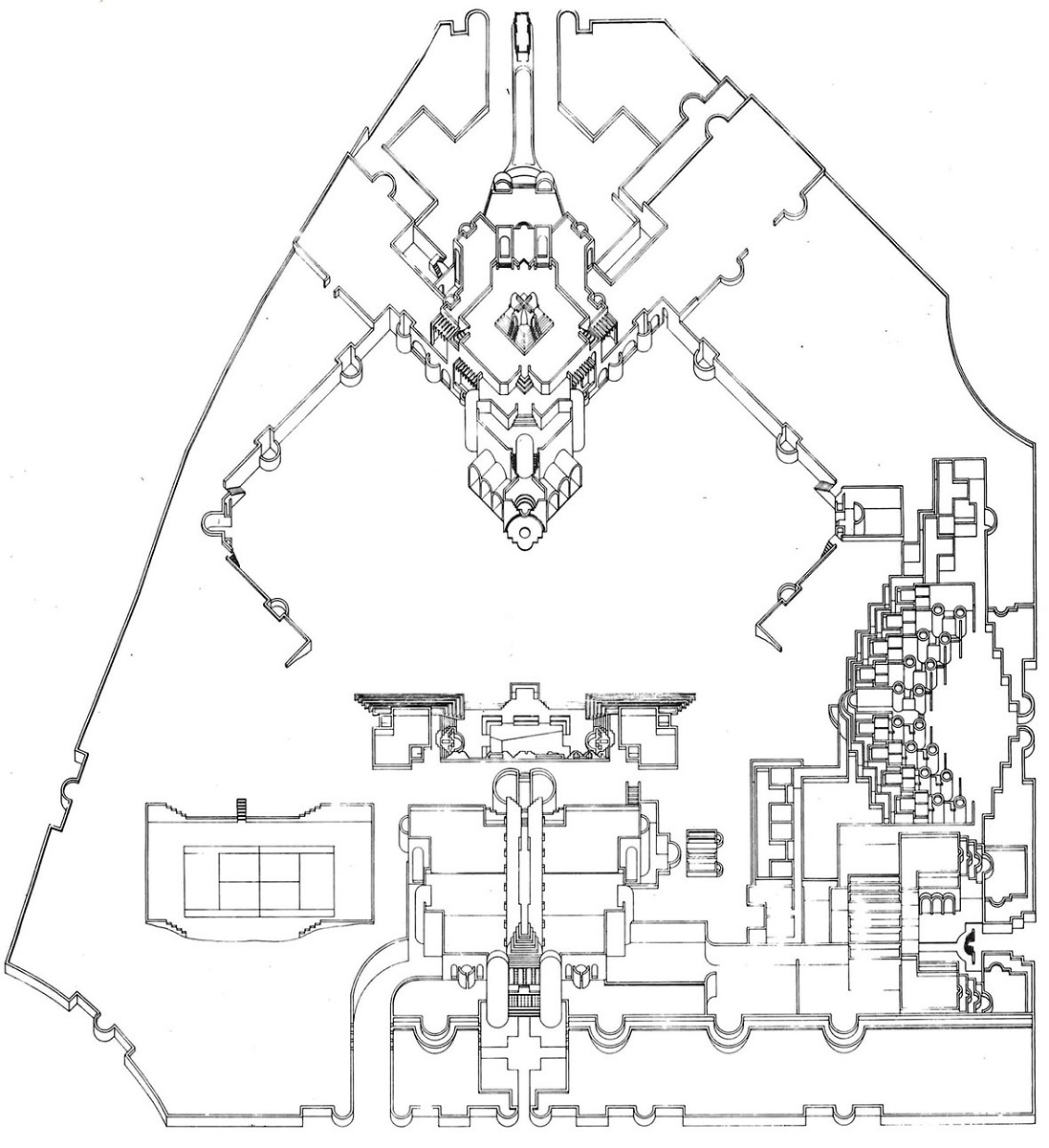 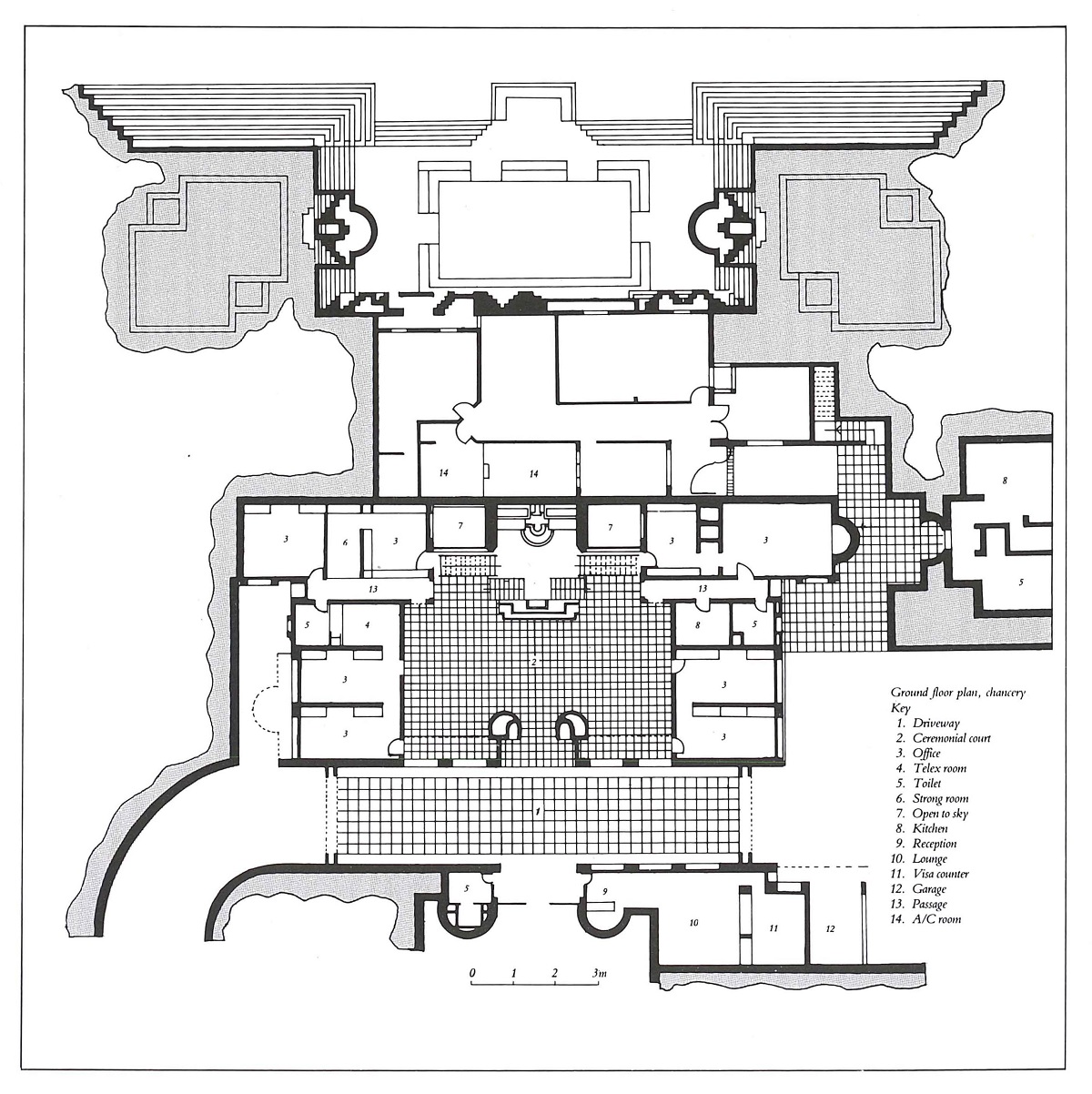 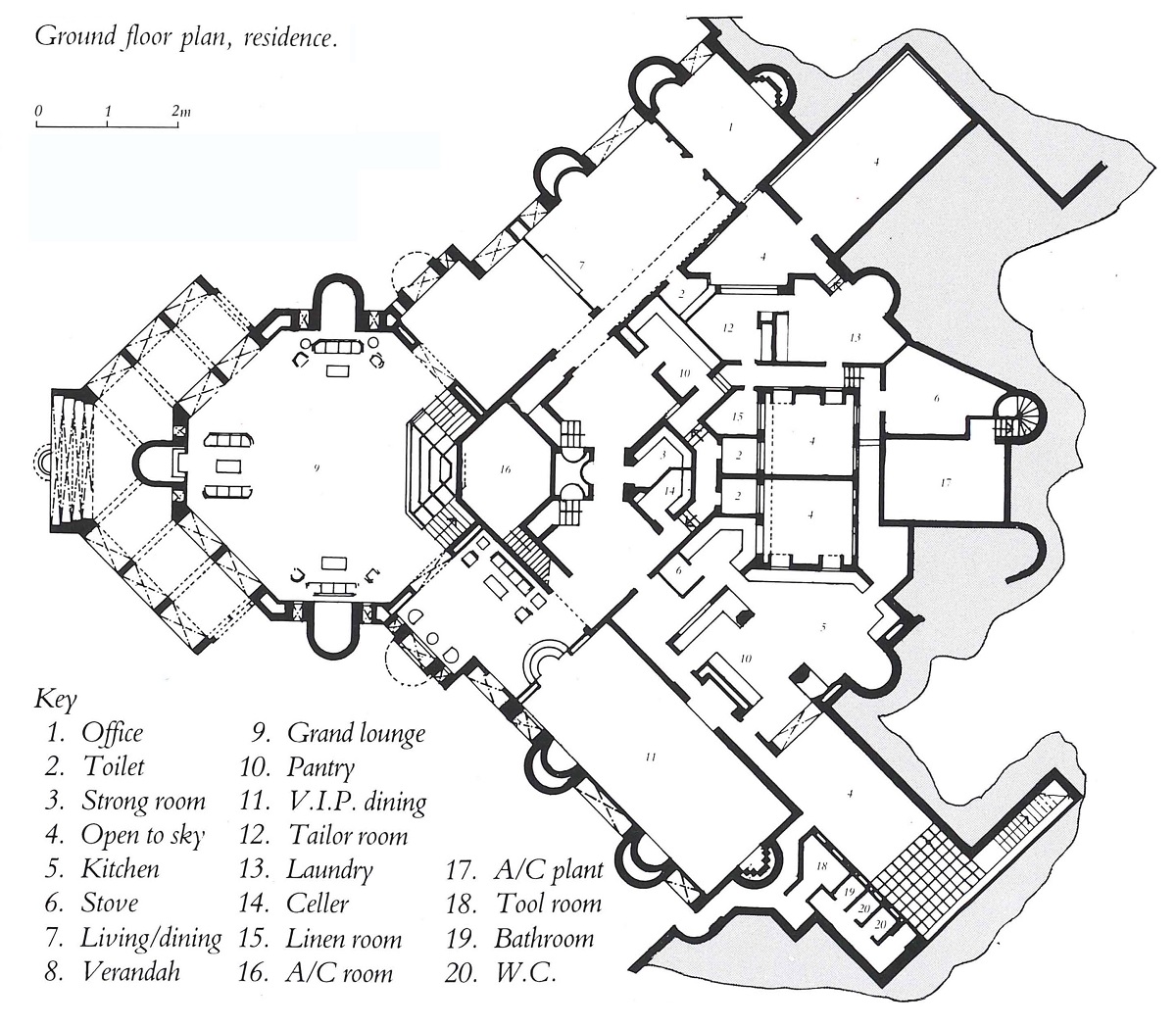 All drawings courtesy of Archnet.

> via Mimar 12: Architecture in Development, and inputs from Sanyam Bahga.