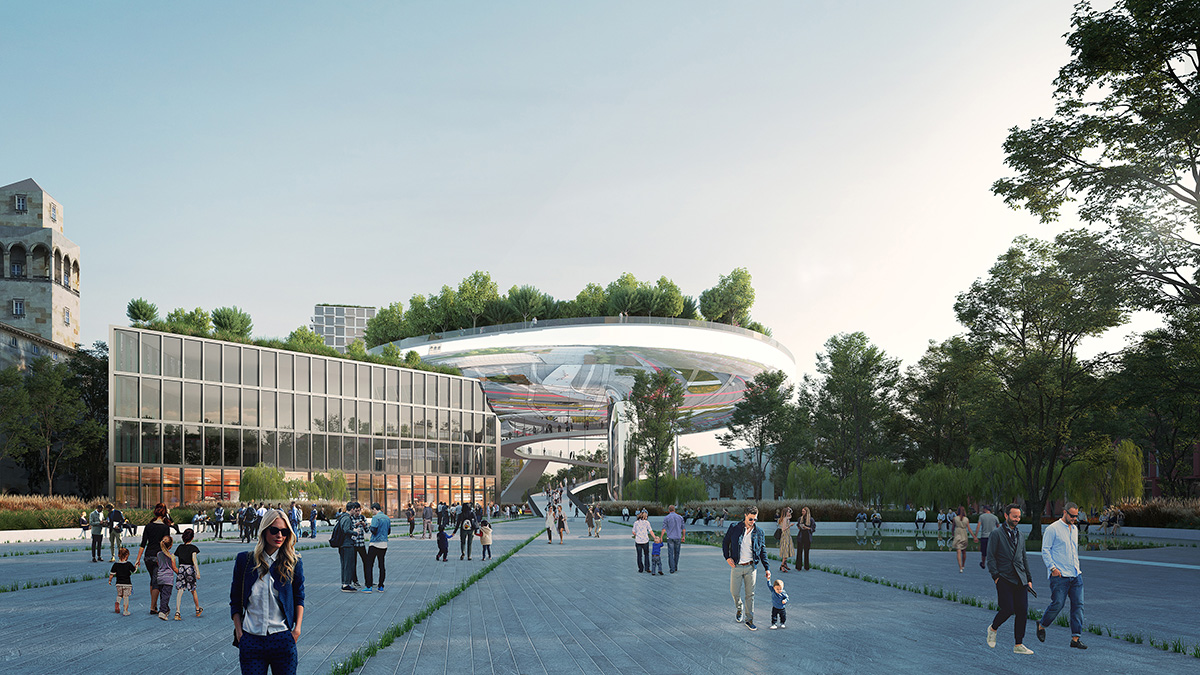 MVRDV has won a competition to design a masterplan for the Ettlinger Tor area in Karlsruhe, Germany.

The project, named Ettlinger Tor Karlsruhe, was developed through intensive public participation from local residents and other stakeholders, who were involved in decision-making at every stage of the process.

MVRDV takes inspiration from the historical fabric of the city, extending the "via triumphalis" that originates at the Karlsruhe Palace beyond the Kriegstraße and making this part of the city more intimate and green. 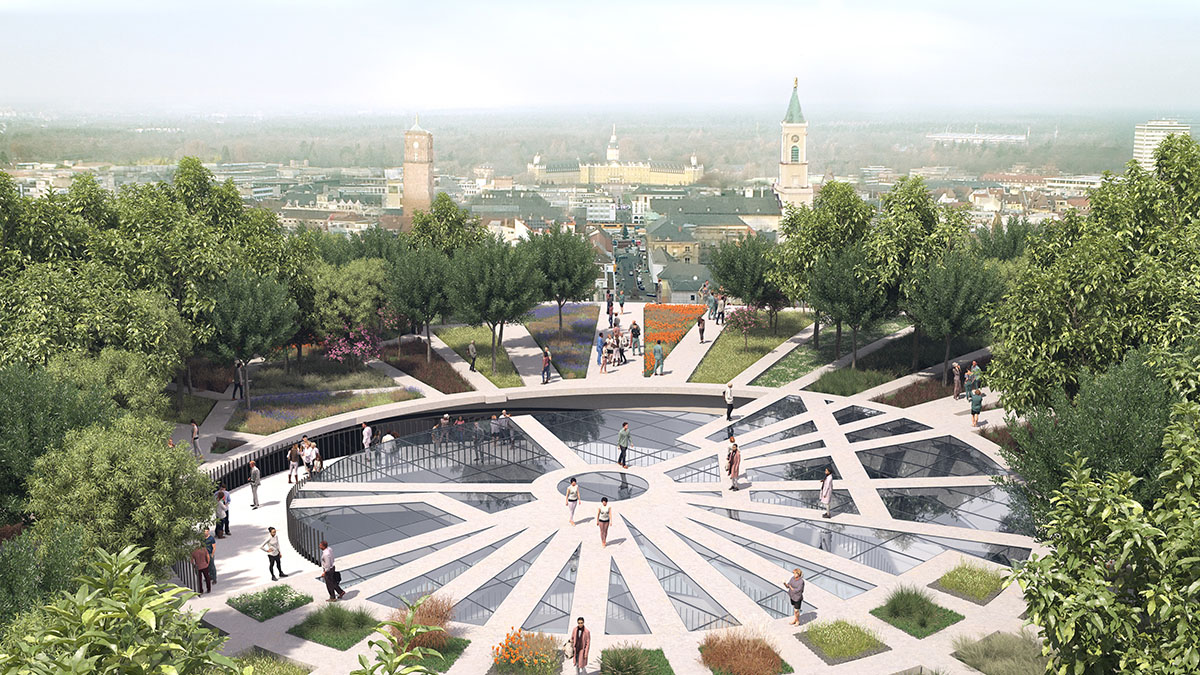 A floating garden will be a centrepiece of the masterplan and it is raised above the Ettlinger-Tor-Platz – reintroducing a structure to mark the former location of the city gate in a way that connects the two sides of the city instead of separating them. 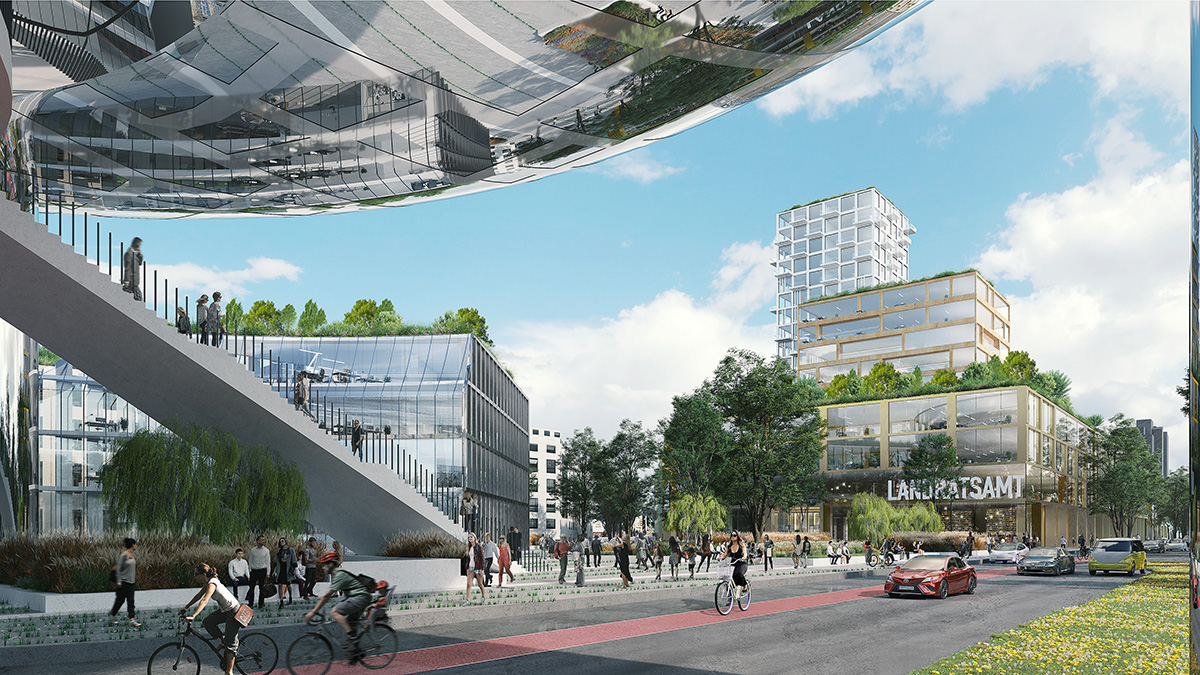 "Karlsruhe is a rare example of a city still largely organised around the enlightenment conception of the “ideal city”, said MVRDV.

"The city grew around the Karlsruhe Palace and as a result it is divided into two, with the densely packed blocks of the city centre to the south of the palace, and a “green city” of parks and forests to the north. MVRDV’s masterplan blurs this distinction, filling a void within the city blocks while also bringing more greenery to the southern half of the city."

In contrast to the absolutist urban planning of Karlsruhe’s past, MVRDV’s proposal resulted from an intensive process of public participation, with each step in the urban framework responding democratically to the desires of the public. 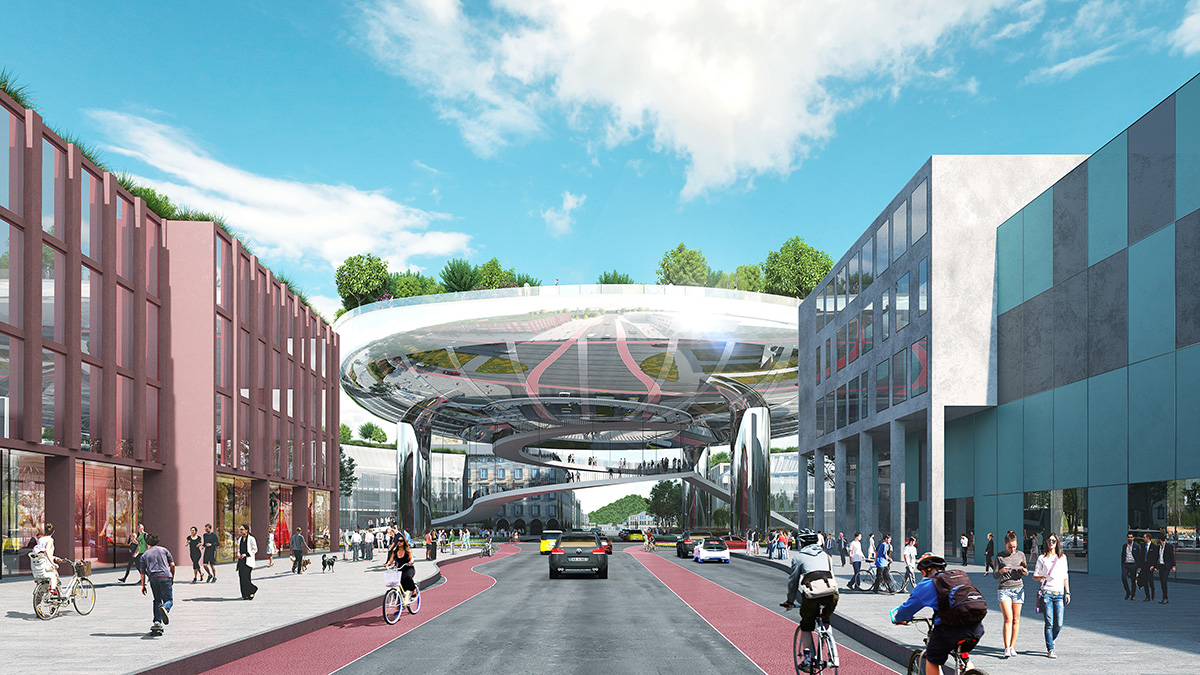 The first step in developing the masterplan was to imagine the area filled with four-storey blocks, matching the heights of the city blocks to the north.

From this starting point, these blocks are “carved” to create the necessary spaces for the city: A plaza is created to preserve the approach to the Badisches Staatstheater; established trees are preserved by carving the blocks to fit around them; two diagonal streets are added to improve connections; and courtyards are created within the blocks as required. 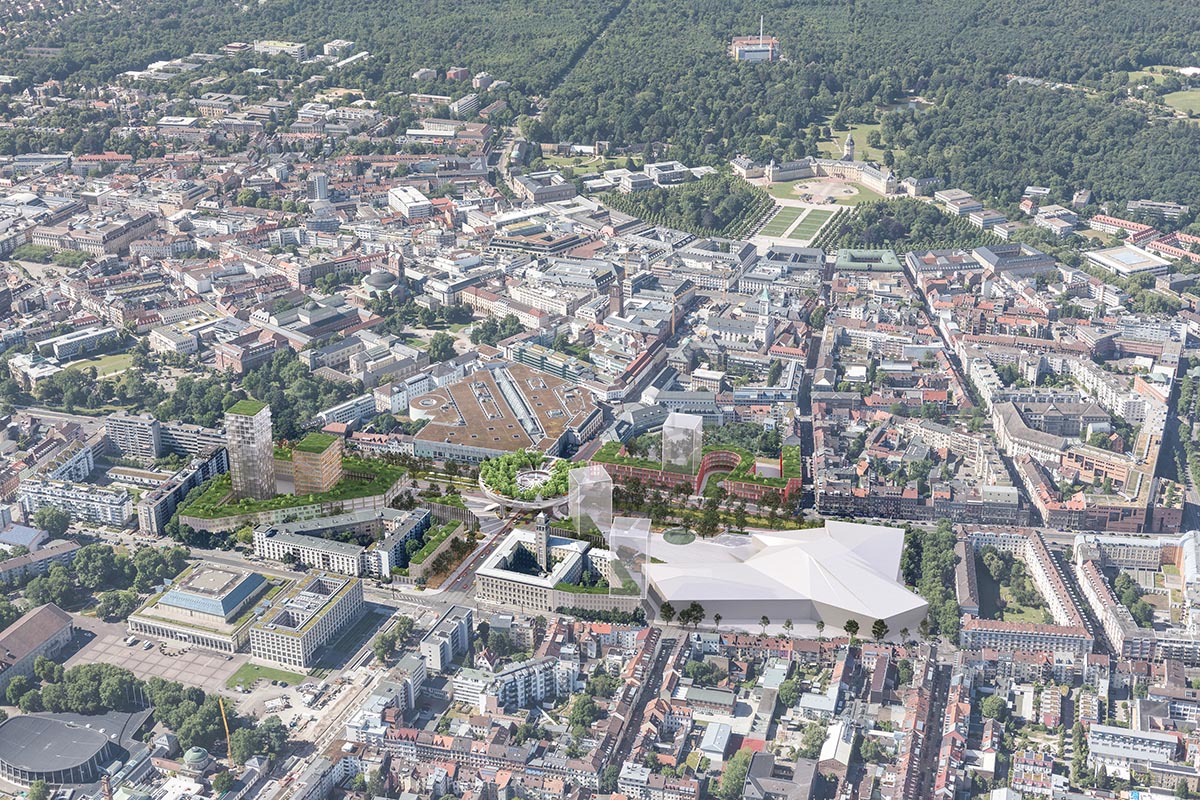 Completing this ensemble is the masterplan’s most eye-catching feature, a dish-shaped “floating garden” above Ettlinger-Tor-Platz that provides a counterpoint to the Karlsruhe Castle on the via triumphalis.

It offers views across the rooftops of Karlsruhe, emulating the castle’s privileged view of the city but conceptually “returning it to the people”.

Inside, the floating garden houses a community forum and a hotel. The curved underside of the structure is completed in mirrored glass to reflect a view of the skyline to viewers on the ground, while the circular rooftop garden is fashioned as a conceptual map of Karlsruhe, with paths and plants replicating the city’s 32 radial streets. "Karlsruhe is a city with a totally unique character. Our masterplan is both a continuation and a celebration of the elements that make it so special," said MVRDV Founding Partner Winy Maas.

"With a mirrored underbelly, and a rooftop garden forming a miniature replica of the ‘Fächerstadt’ layout, the focal point of our masterplan becomes a monument to the city, to the buildings around it, and to the people that live there."

On the four-storey blocks, each façade is different in character, with building owners and stakeholders able to bring their own flair to the district. 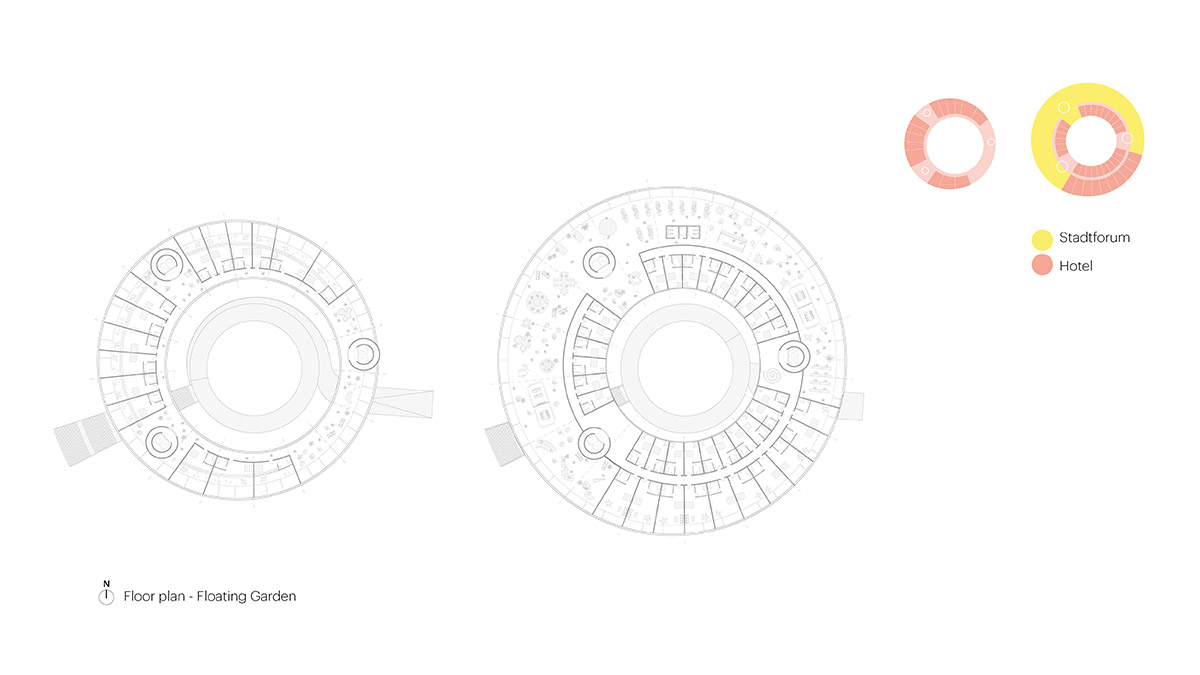 The rooftops of these new blocks will be densely planted to create a rooftop forest, with stairs and bridges making it an accessible urban park, contributing to a reduction in the urban heat island effect.

The masterplan was created with careful consideration given to the future of the district administration office (Landratsamt) of Karlsruhe, which is currently housed in an outdated modernist tower on the west of the masterplan site. 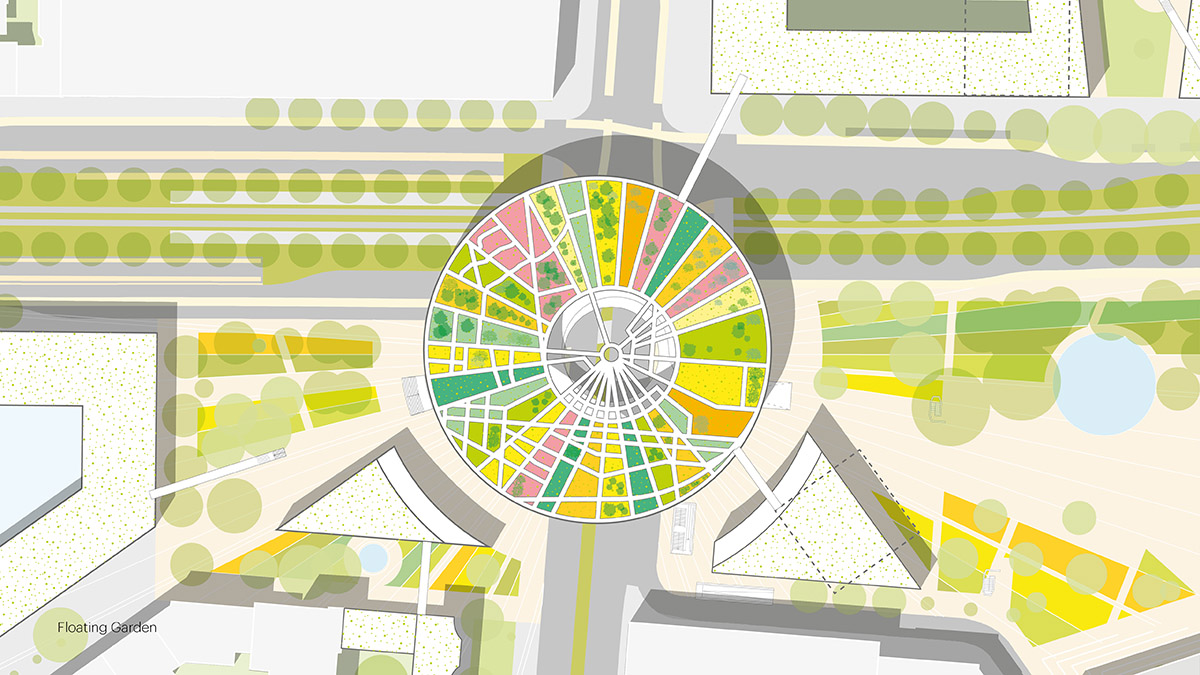 The plan allows for a phased move to the low-rise block that would occupy the same area, after which the tower could be either renovated as residential apartments, or demolished and replaced.

A further alternative offers a scenario in which the district administration office would move into a new building hovering over the Ettlinger-Tor-Platz – replacing the floating garden – after which the Badenwerk high-rise could also be either modernised or replaced. Other locations in the masterplan are also identified as ideal locations for the future addition of residential high-rises, contributing to a more lively city centre by improving the area’s mix of functions. 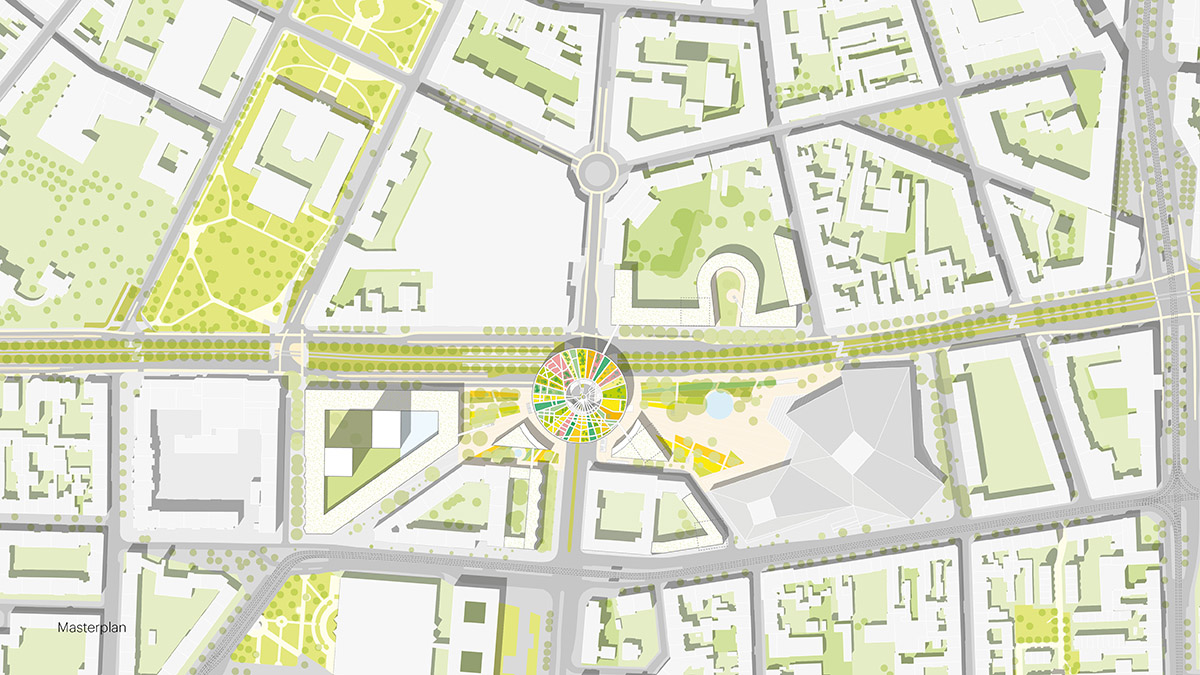 MVRDV was awarded joint-first place in the competition alongside Max Dudler Architekten, since both firms took similar approaches in a number of aspects.

The district administration therefore proposes to “superimpose” the two masterplans to create the urban framework for architectural competitions. A decision on the treatment of the Ettlinger-Tor-Platz will be made by the end of the year. 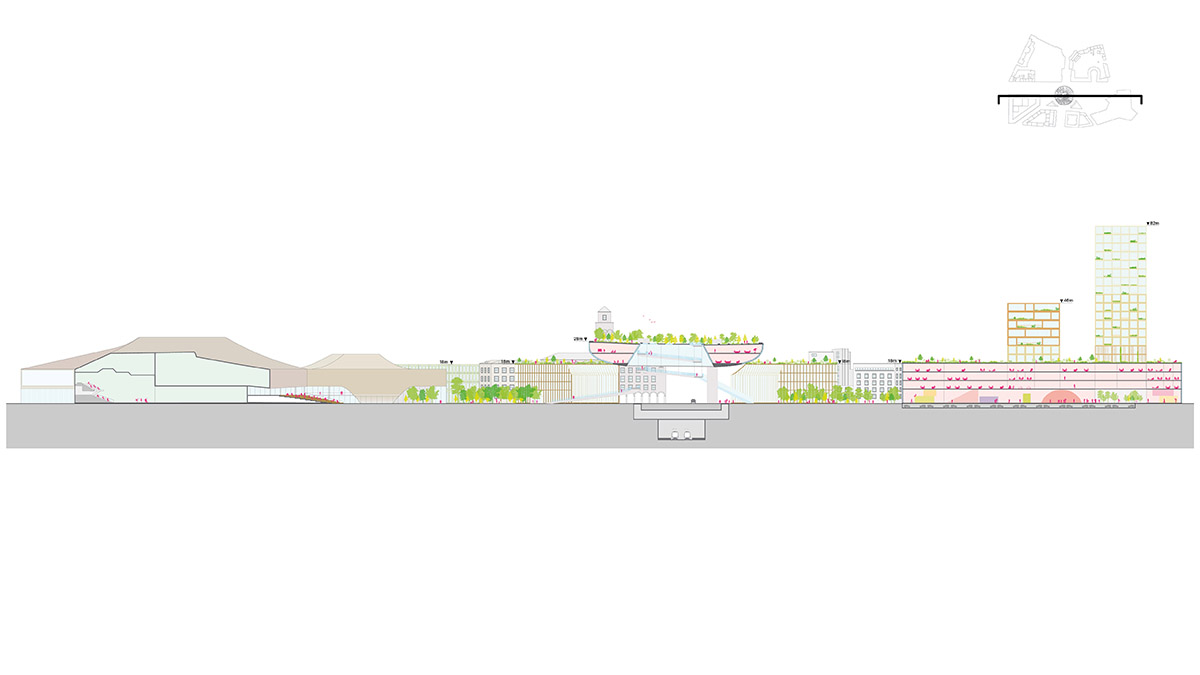 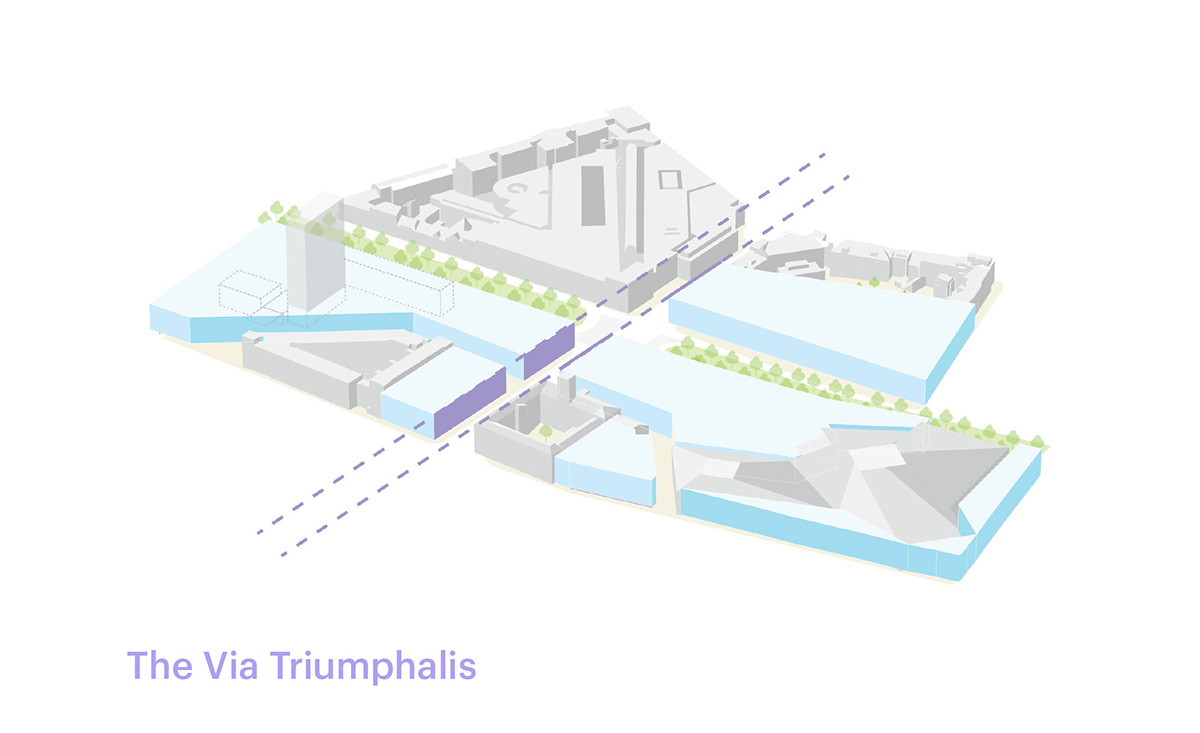 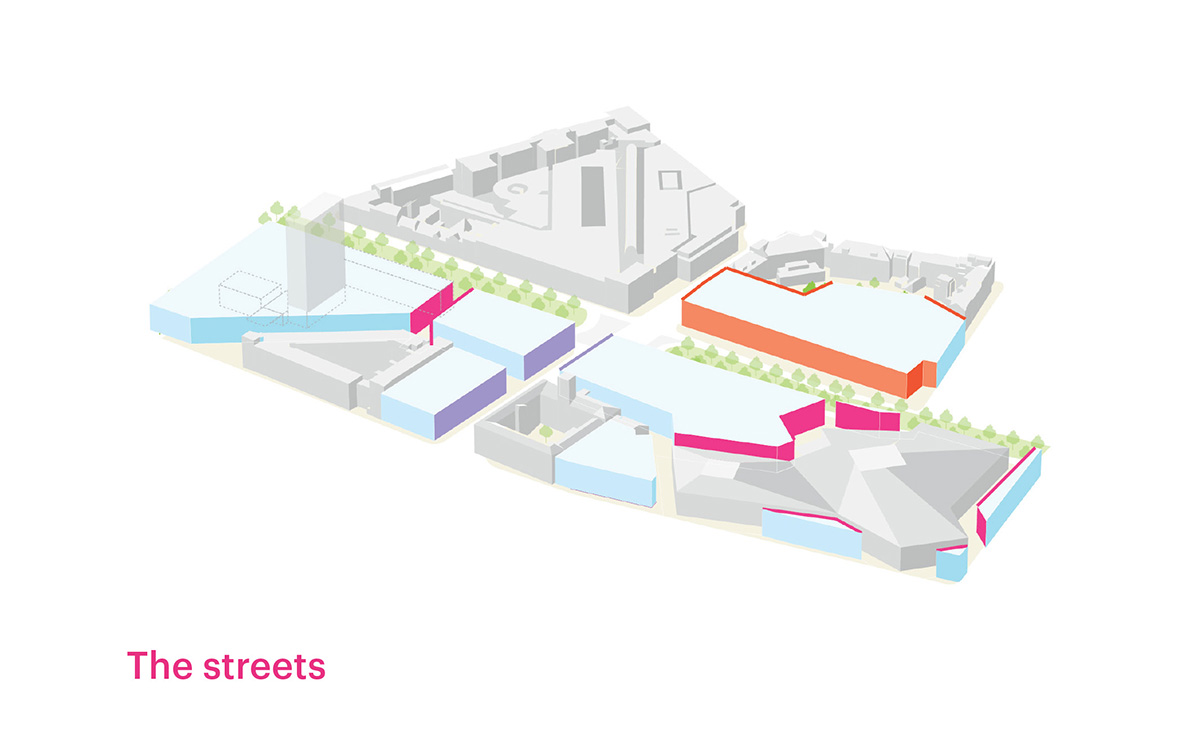 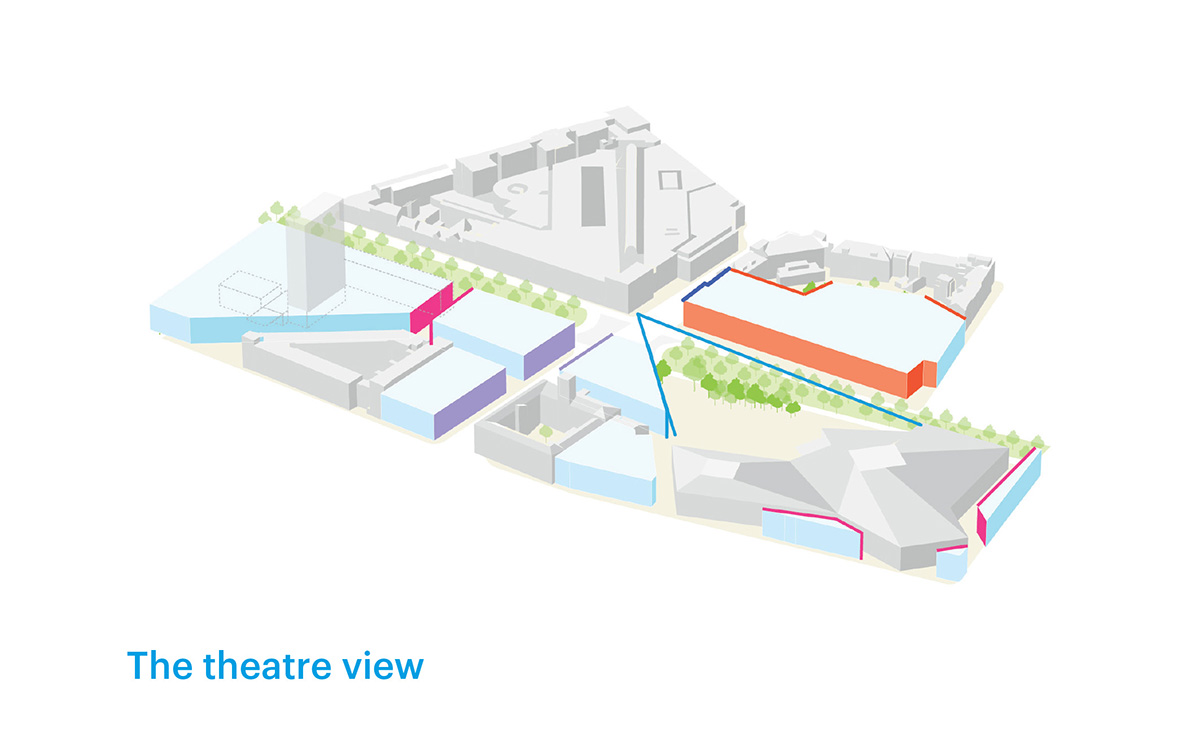 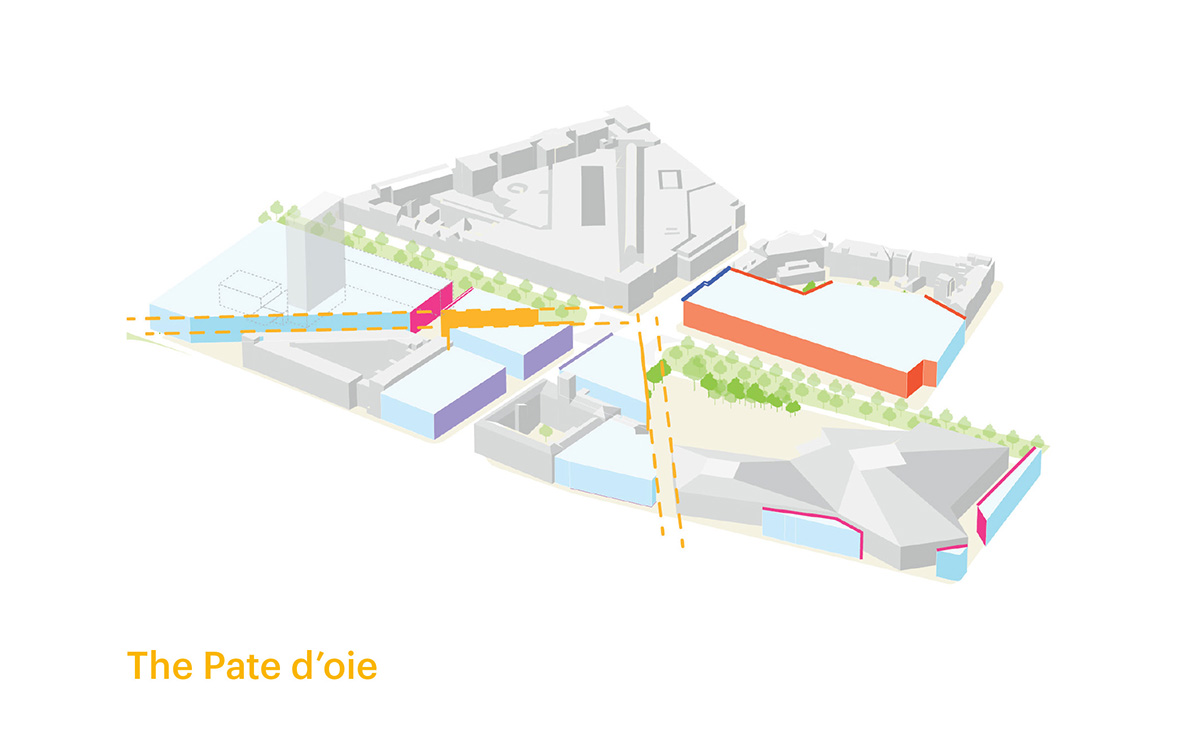 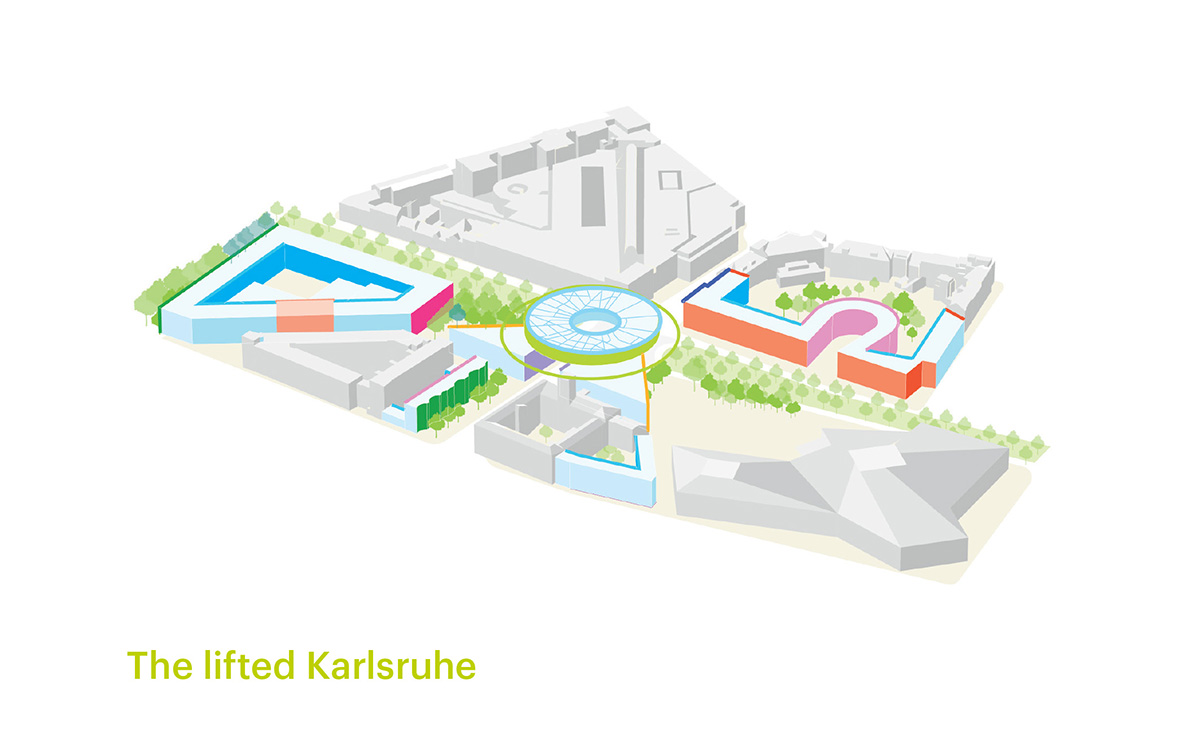 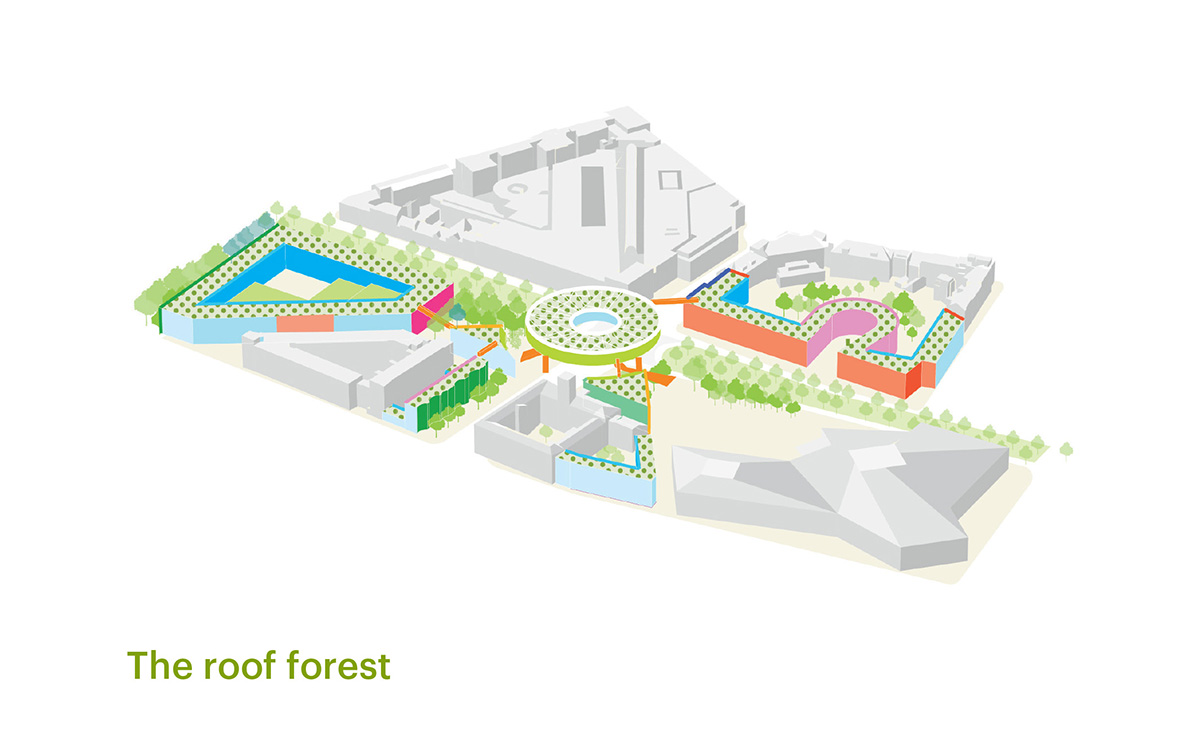 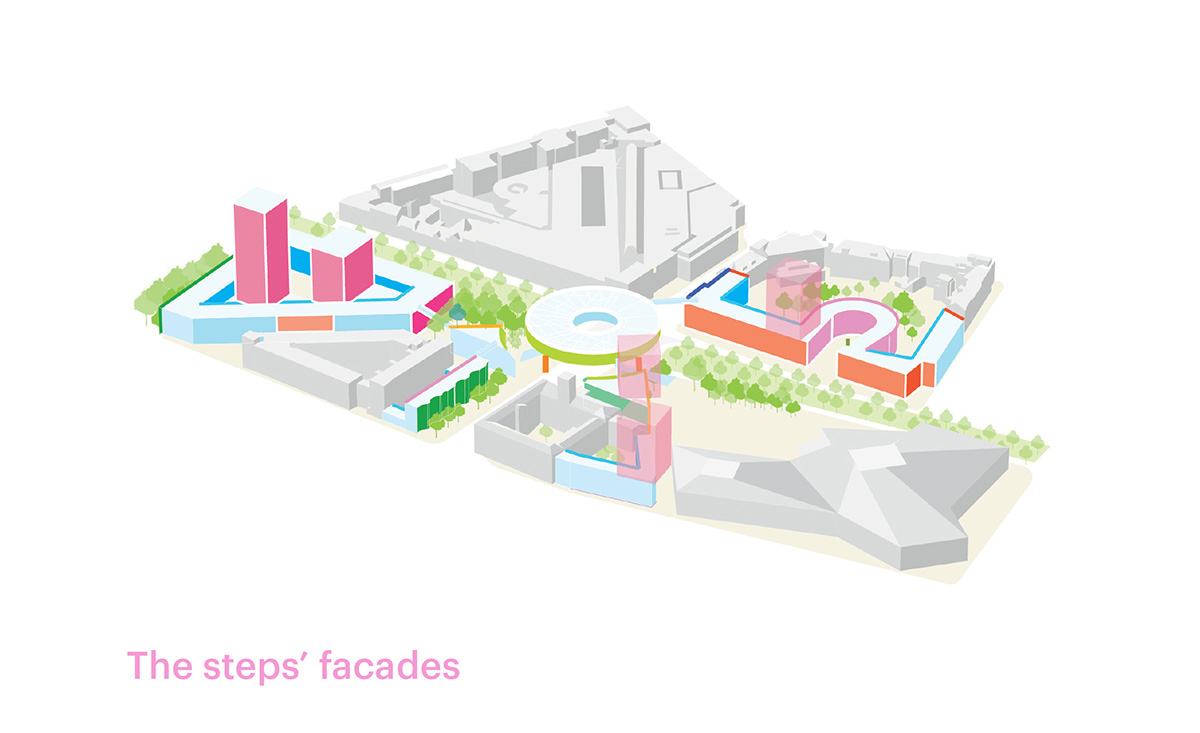