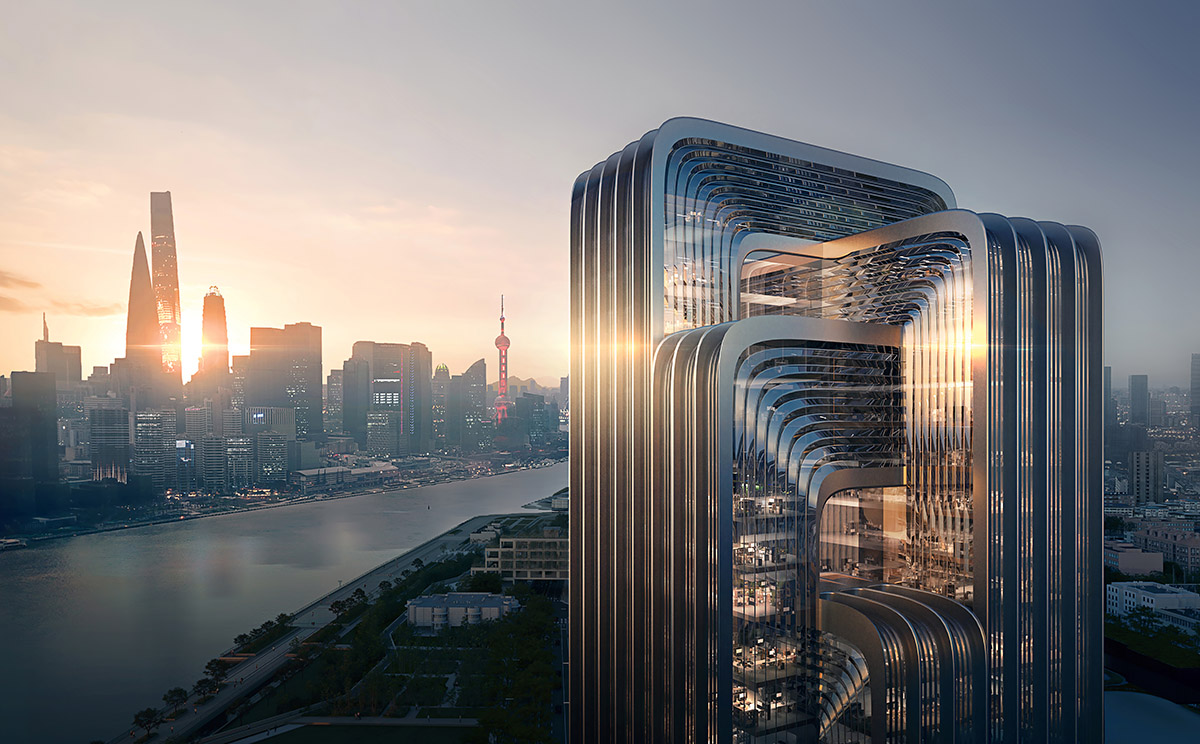 At present, the Group owns 419 subsidiaries and 6 listed companies which are distributed in about 30 provinces at home and 40 countries/regions abroad.

ZHA's design comprises three major volumes that are interlocked each other. Conceived as "mixed-use urban campus", the complex will contain three office towers, shopping, dining and leisure facilities linked together by a park that connects directly with the city.

"The new headquarters echoes CECEP’s commitment to environmental education by creating vital new public spaces for its staff and neighbouring communities to enjoy the natural world," said ZHA in its project description.

CECEP focuses on renewable energy technologies that include: solar, hydroelectric and wind power generation; environmental conservation initiatives such as water collection, treatment and recycling; as well as developing innovations to reduce energy consumption and emissions throughout the construction industry.

Located adjacent to the Yangpu Bridge on the Huangpu River, ZHA's design scheme responds to its riverfront site and is defined by the history and dynamism of Shanghai.

The studio conceived the new headquarters to be "‘greenest" building in the city with sustainability embedded into every aspect of its design and construction to achieve more than 90 credits in China’s exacting Three Star Green Building Rating system - the highest score for any building in Shanghai.

The tower will cover 218,000-square-metre area setting new benchmarks for the city in energy conservation, energy efficiency and sustainability.

"With Shanghai’s significant temperature differences between day and night, each building's integrated thermal mass also provides reductions in both heating and cooling consumption," added the firm.

"Extensive use of locally-produced, prefabricated components will reduce the project's embodied carbon and also support the local economy while procurement will prioritize the use of recycled materials."

Moreover, by using photovoltaics, located at roof level and within the façades are connected to battery storage and a micro-grid, these panels will provide on-site energy production that will reduce energy consumption by 25%.

In addition to high-efficiency heating and ventilation with waste heat recovery, together with cooling systems using non-potable water, the new headquarters will also use thermal ice storage for cooling. Ice generated by chillers at night using off peak electricity is stored in thermal tanks then used for cooling during the day to significantly reduce peak daytime electrical consumption when the cooling load is highest.

The building management system will continually monitor the interior environment and automatically react to changes in internal conditions such as variations in temperature, air quality, natural daylight, or number of occupants. To reduce energy consumption and prolong their lifespan, these intelligent systems will also collate data to predict and optimise energy usage.

The new headquarters will use 5G network capability to operate intelligent management and biometric security systems that will eliminate contact with communal surfaces by staff and visitors.

For the new design, ZHA has released only one rendering. More details and more images are expected to be shared later.