This single family house, supported by a triangular column, references to Mayan antic culture and the Yucatán identity, combined with contemporary elements.

Named Casa Mérida, the 80-metre-long family house is situated in the historic center of Mérida, Mexico, a few blocks away from its main central square, in its colonial area. "Mérida is the capital of Yucatán, but also the capital of the Mayan culture, Yucatán representing a large part of the mexican mayan territory," said Ludwig Godefroy.

"In spite of the fact this civilisation disappeared long time before spanish people arrived, Mayan people and languages always survived and still exist today, which always made this region very unique and different than any other in México ; a sort of small country within the country, with its own way of thinking." 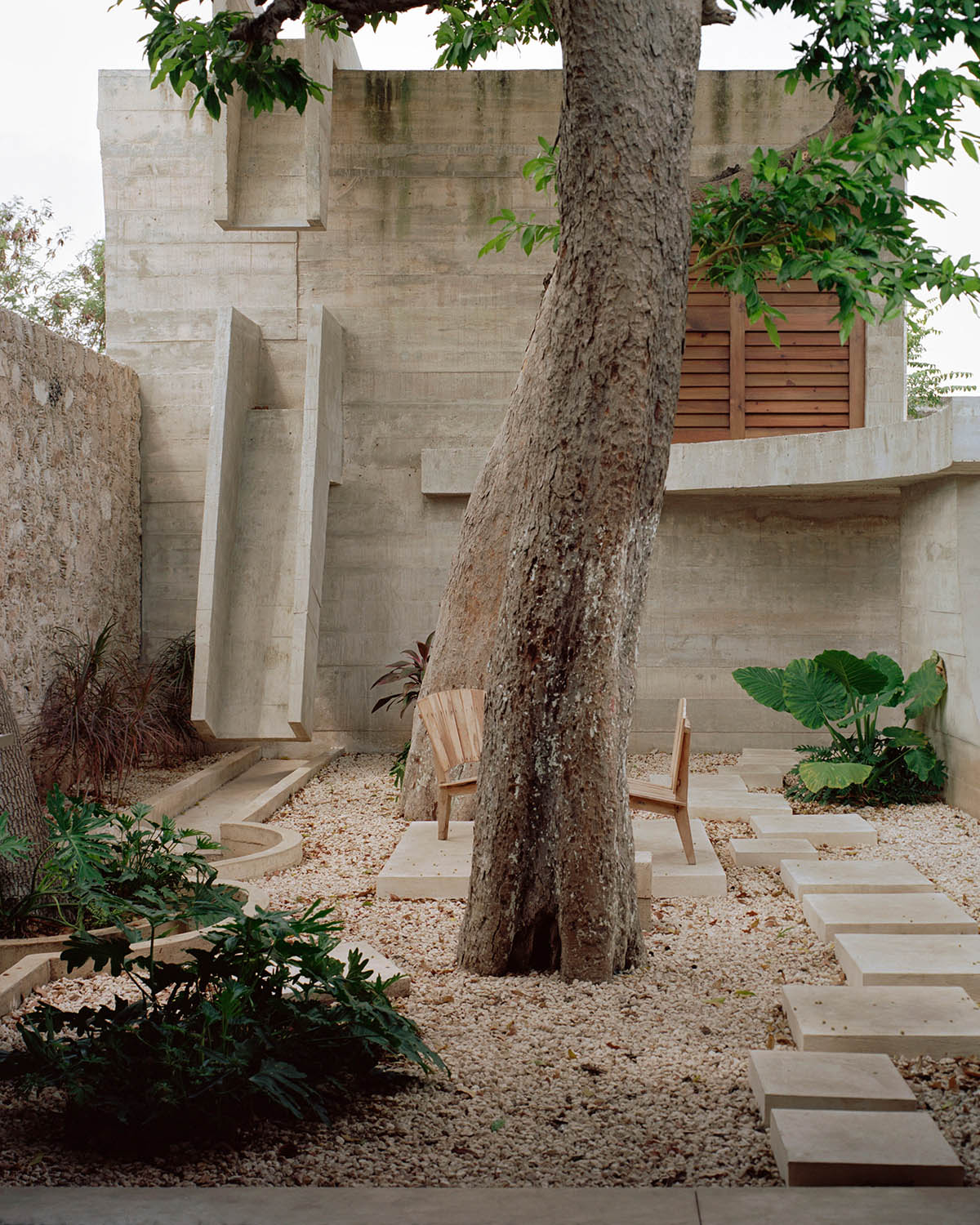 "Another very important point is the fact that Mérida has a very peculiar warm weather all year long, with intense temperatures and a peak that can reach 40o celcius in May, as well as a very high level of humidity, specially during the rainy season from June until the end of September," the architect added.

"Through centuries, this weather led the architecture of the city to a recognizable traditional typology, a mix of history of its colonization with its Mexican tropical reality from Yucatán, which resulted in a singular tropicalized colonial style." 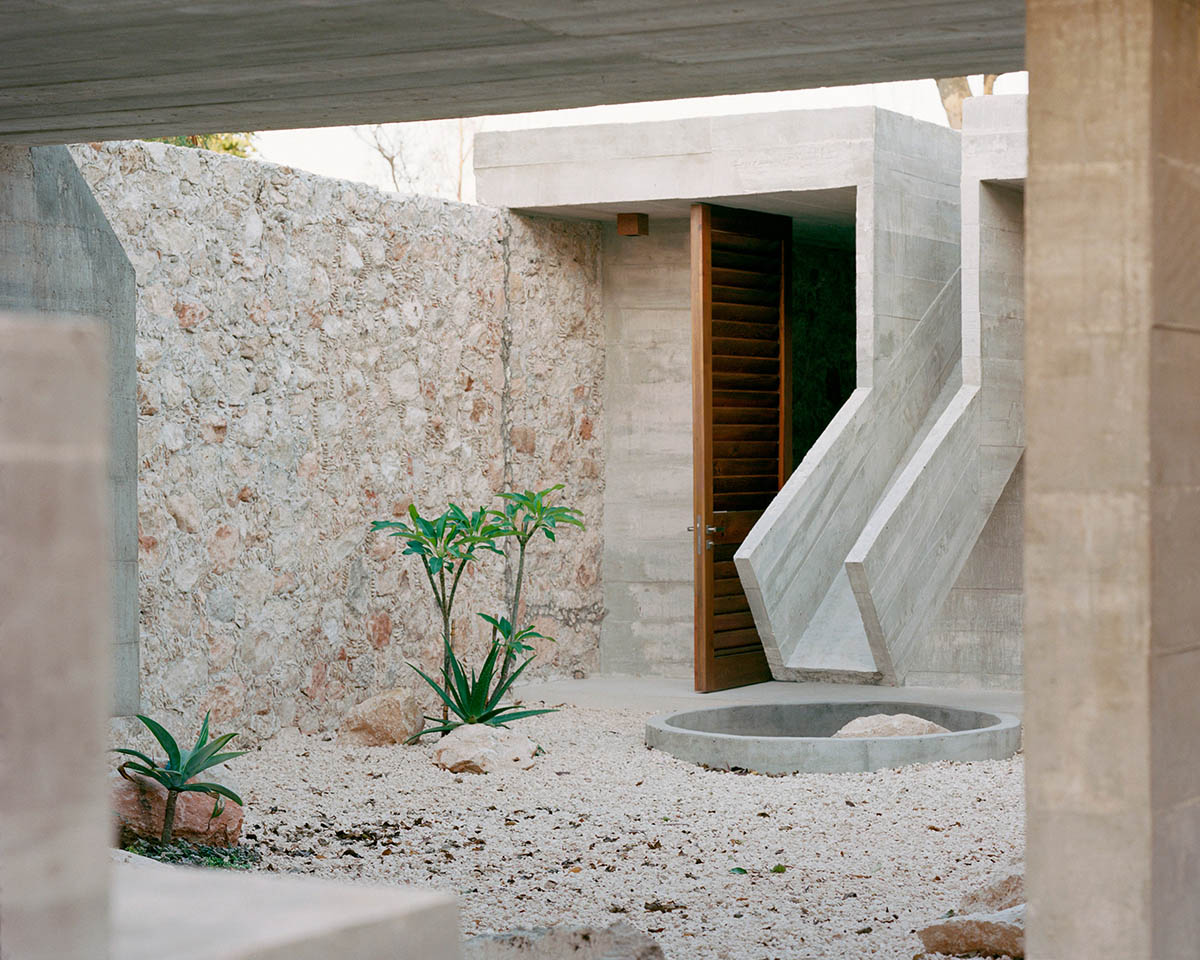 As the architect highlights, this house typology is basically based on natural crossed ventilation under high ceiling volumes, all connected together by a series of patios letting the air flow through the entire house, providing this way a natural cooling system. 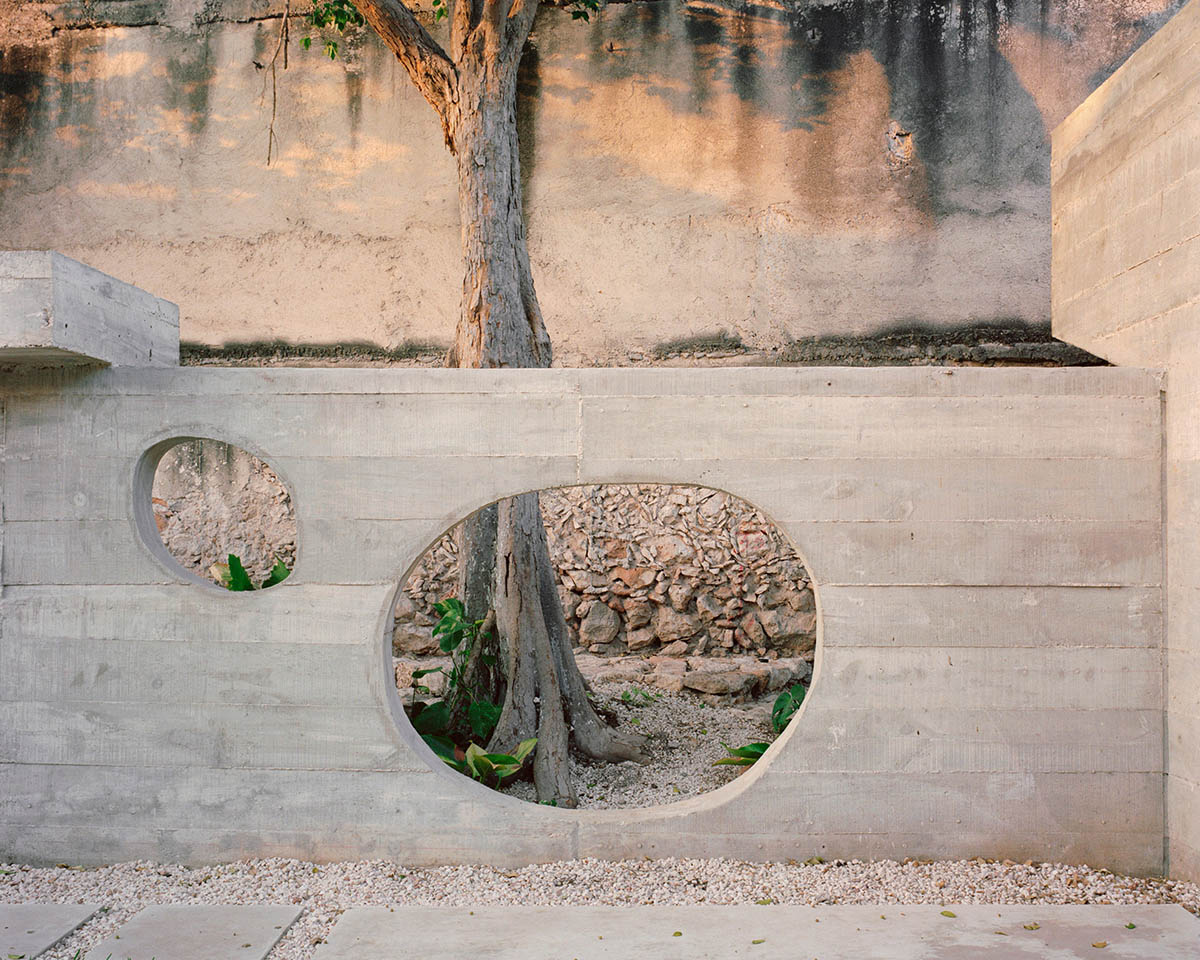 The architect asked: "How can we step back from this intense use of AC Mérida is doing today? And what could be the possibilities architecture is offering us?."

"With this goal in mind and having a look at the past, came the following question: How is it possible to build architecture that reflects and considers the Yucatán identity, to make this house belong to its territory?."

"In other words, how could this house be mayan?." 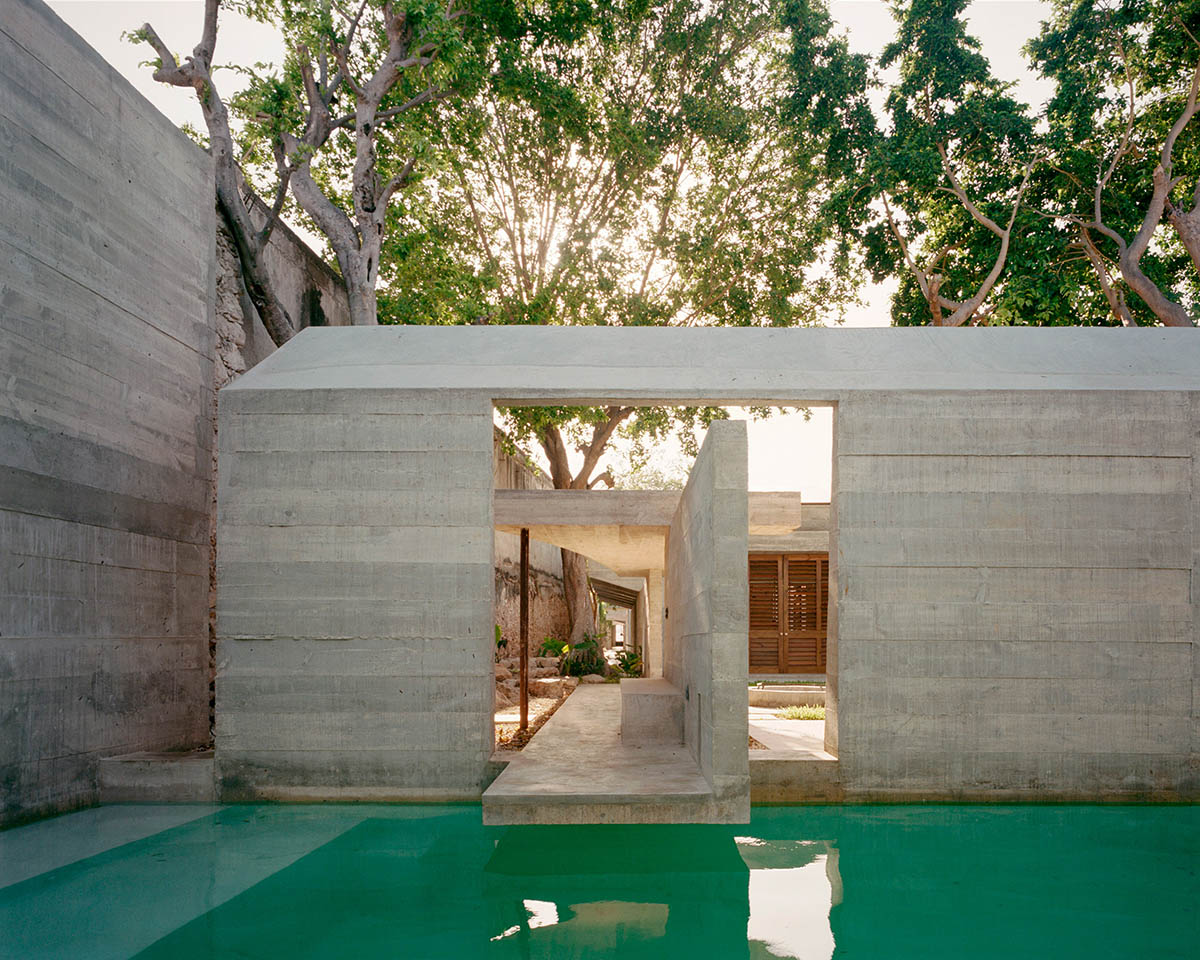 Casa Mérida project has been conceived to explore the relation between contemporary and traditional architecture, both connected through a very simple use of vernacular references.

When entering for the first time on site, something memorable was the unique proportion of the plot, which is a broken rectangle of 80 meters long X 8 meters wide, looking like a big lane. 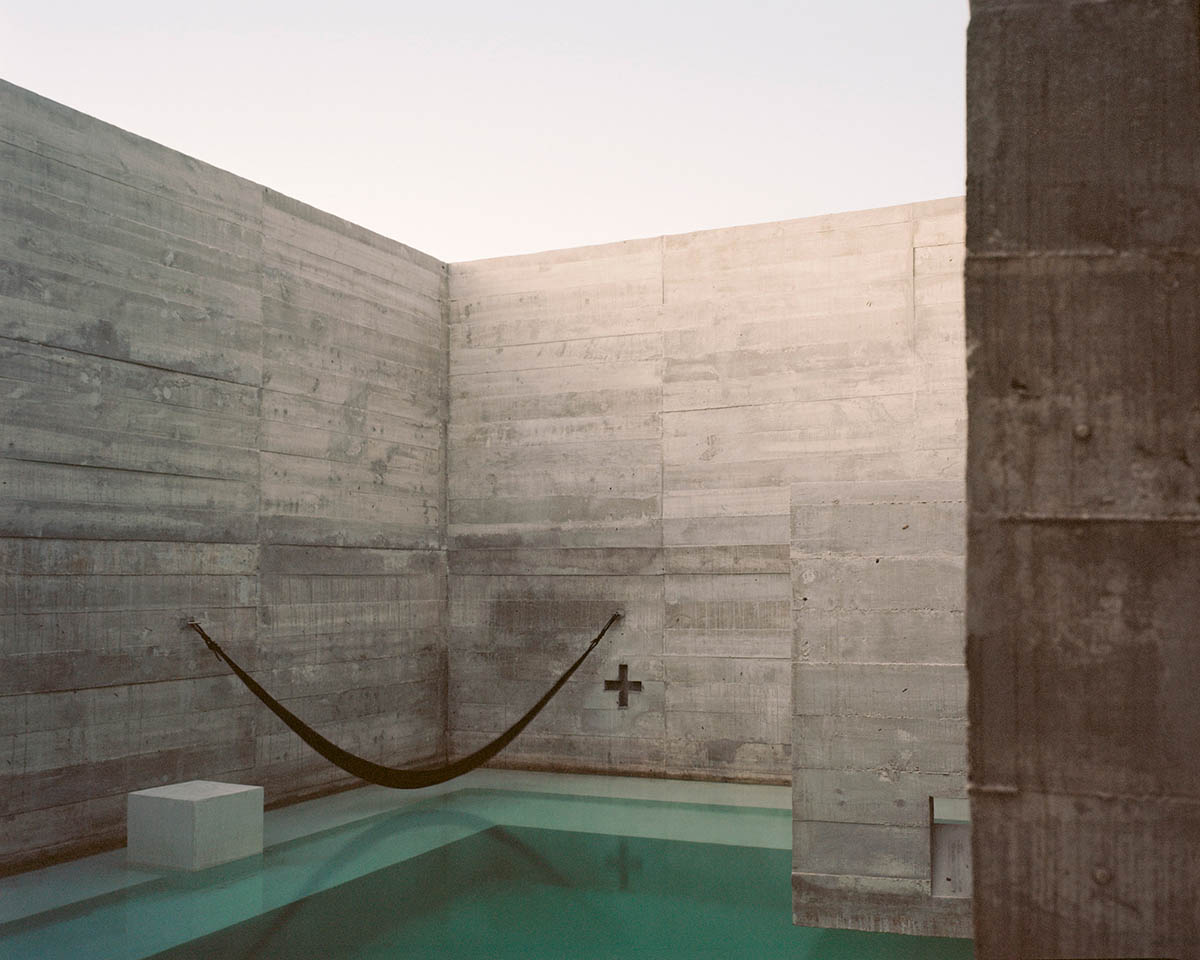 Here came the one and only idea of the project: to preserve this 80 meters perspective, as a straight line, crossing the entire plot from the entrance door until the ending point, where the swimming pool is located. The architect added that inserting back the traditional air flow cooling concept as a starting point. 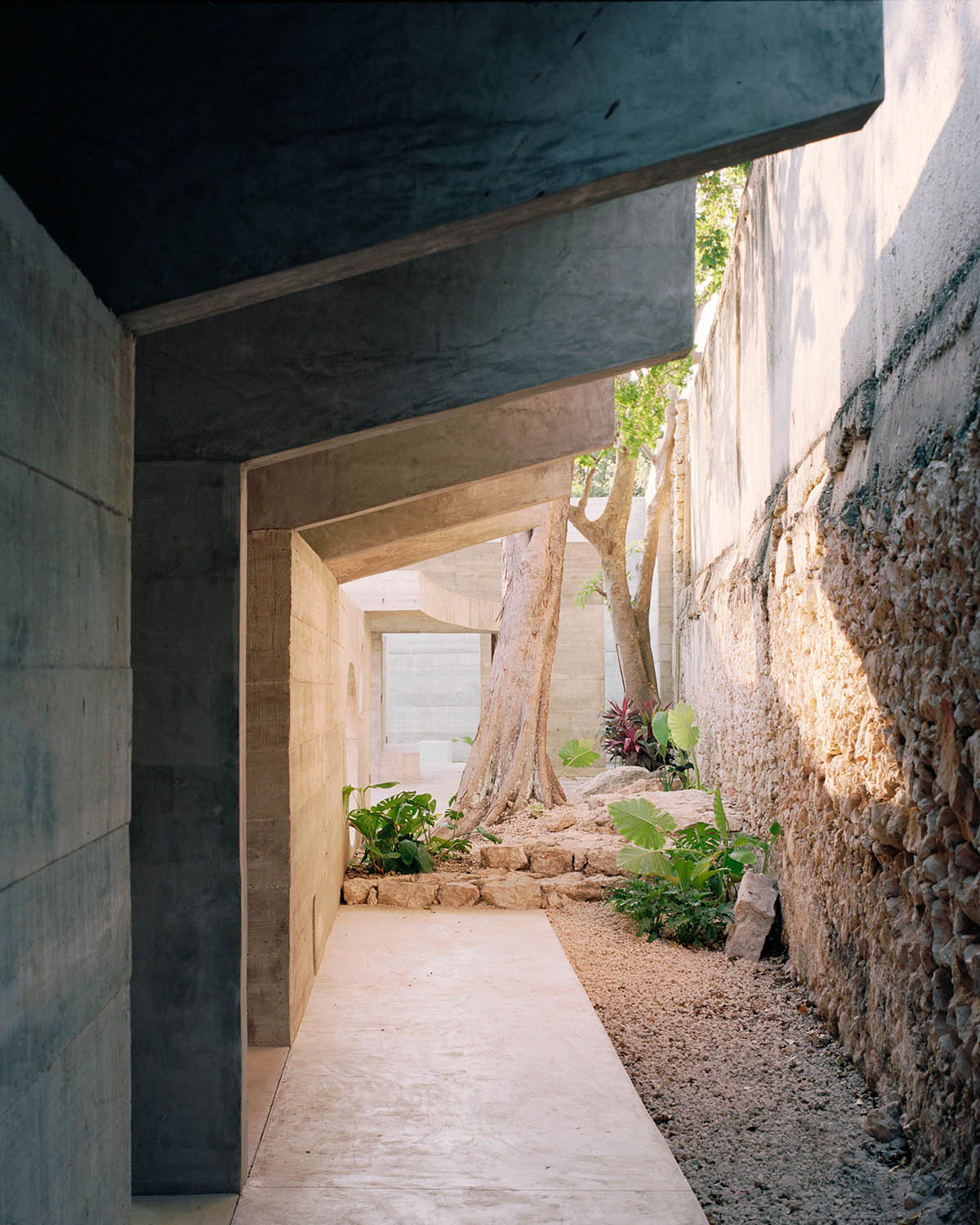 But it was not only about the air circulation, this long perspective is also refering to the mayan antic culture and architecture, and more precisely, the house gives references to "Sacbé" - literally the white path, stoneways covered with white limestone stuc.

Those straight lines used to connect all together the different elements, temples, plazas, pyramids and cenotes (natural sinkhole, full of clear water, used for sacrifice and offers to the gods) of a mayan city; sacred ways which could even go from one site to another along a few hundred kilometers. 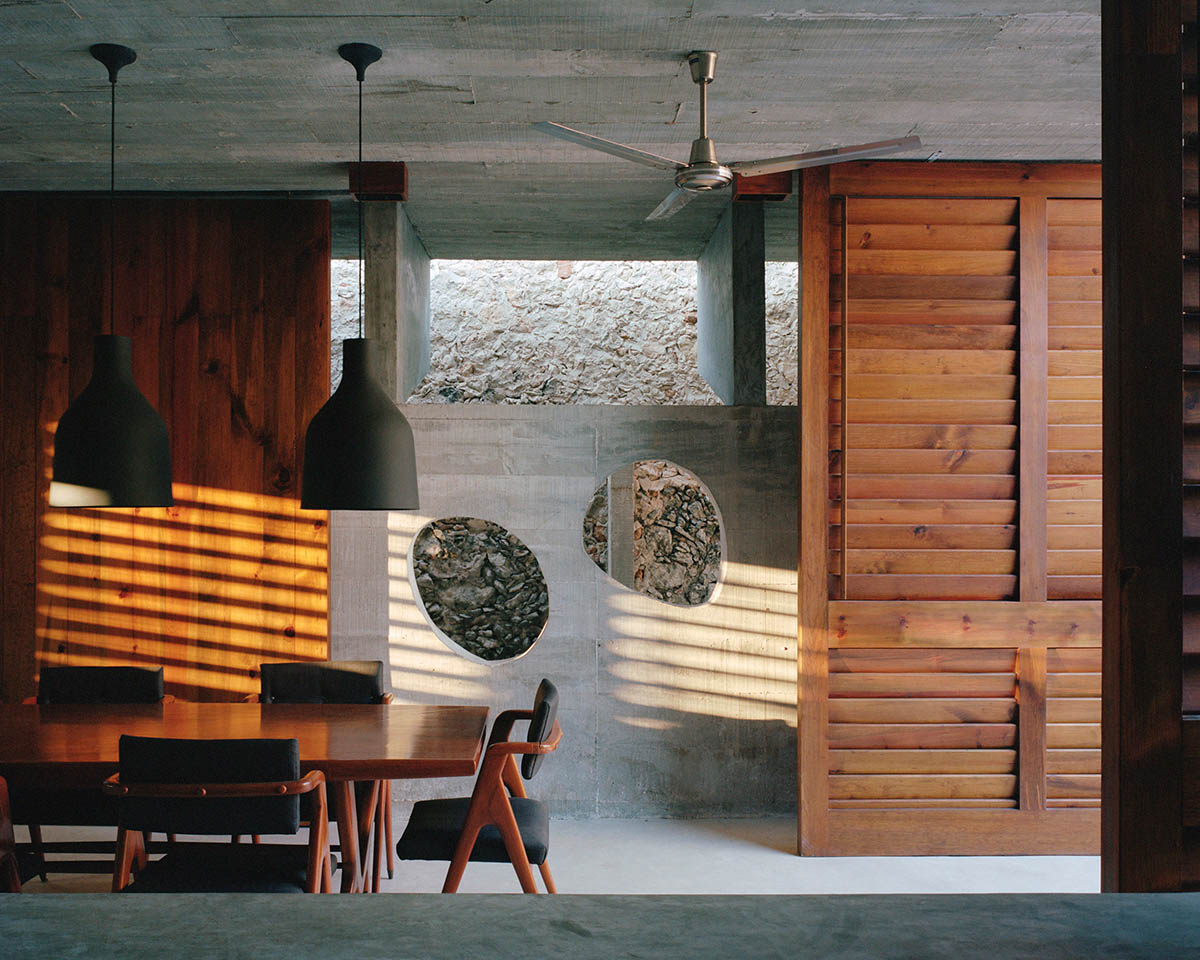 By using the perspective, this very simple classical architecture artefact as a central element and main idea, the project got immediatly stuctured along this line, converted then in a long concrete wall guide, a sort of axis visually organizing the house, as well as all the movements, since it's also working as the main circulation hallway. 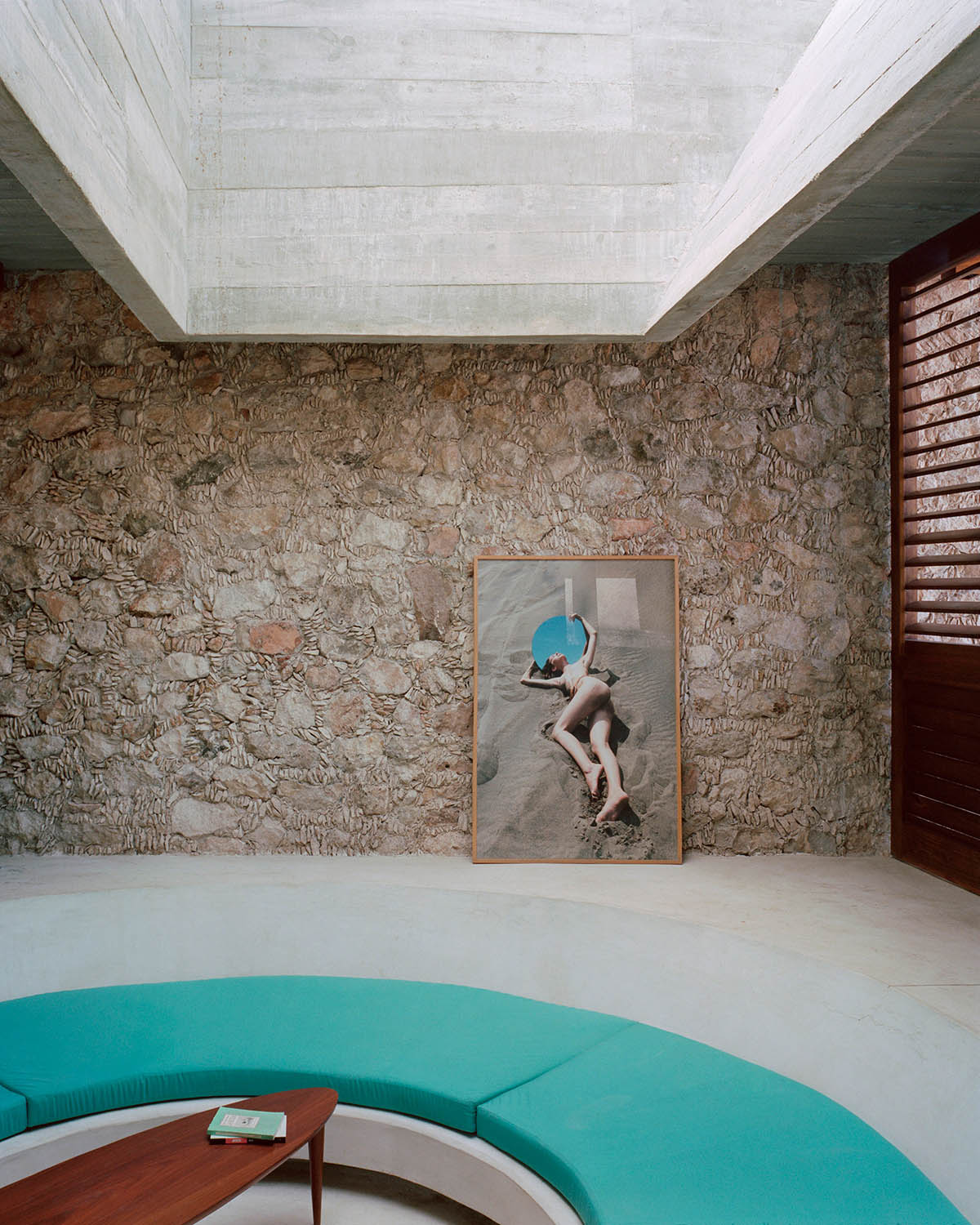 In a second stage of the project development, it naturally and literally appeared as a vertebral column, therefore it became the main structural concrete element to carry all the rooftop slabs.

With its airflow column, Casa Mérida went back to an original and elemental principle of the vernacular yucatec architecture, the natural crossed ventilation, which then brought the project to a second question: How is it possible to reach the best autosuffisance in the middle of a city, without being so dependent of modern technologies, to try to be more responsible with the energy waste management of the place?

This next concern took the project towards the idea of disconnecting the house from the city to get a better control on it, basically creating a sort of isolated countryside situation in the middle of an urban context. 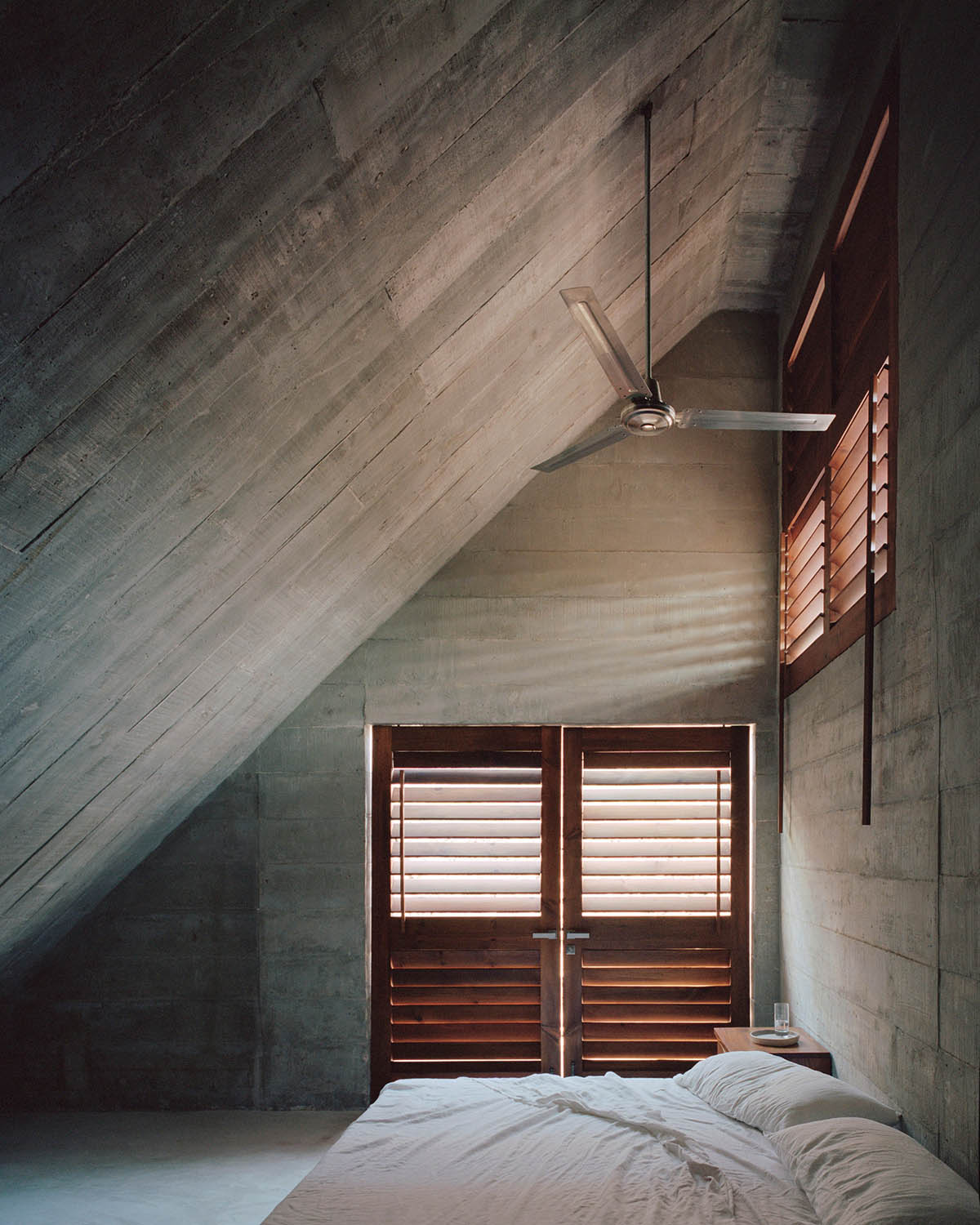 In addition to the permutation between front and back, the general layout of the house is also organized according to a regular rythm of positive built area and negative empty area, to always generate empty spaces on both sides of the built spaces, making the gardens participate instead of only being juxtaposed ornamental ones.

The outdoor spaces got integrated as part of the inner space, vanishing the classical border between in and out, increasing the visual depth in order to create a more generous amplitude sensation of the volumes. 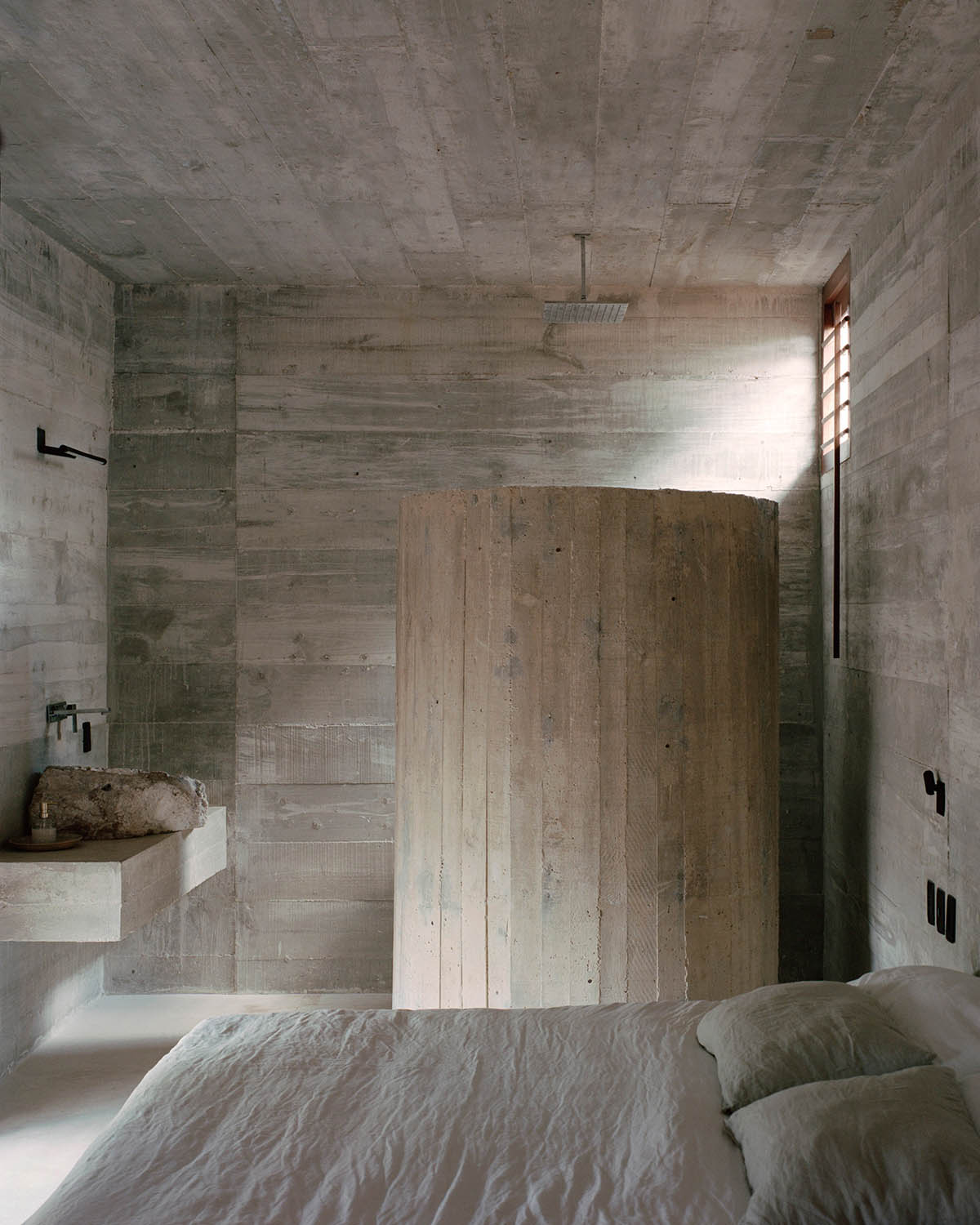 The purpose of this house is to make disappear our urban daily references from México city, where we live behind our large glass window apartments, to foment an outdoor life, in which the house is breaking the basic concept of the facade; the house does not enclose people, it stays open and breathes permanently, while providing the essential feeling of protection and privacy.

Casa Mérida is inverting the classical scheme of the house with its garden, to create a singular habitable garden with its house. To conclude, after isolating the house in a sensitive way, came the last obvious point of disconnecting the house, energically speaking, from the city.

After resolving the cooling system as the first major energy consumption issue, inspired by the architecture of the past, encouraging a most reasonable use of AC, the second point to consider was the water. According to the fact Yucatán is a region full of water in the subsoil, to drill a borehole to get clear water from deep down was the most logical solution. However to complete a full cycle of water regenaration, the rain water had to go back to this subsoil, and absorption wells were designed to fullfill this function, placed under sculptural water collectors, which became part of the aesthetic of the house.

The wasted water system also got disconnected from the one of the city, using a biodigester to treat the dirty water and generate watering for the garden. The full cycle from pumping to regenerating without letting the city in charge of our wasted water was now completed. 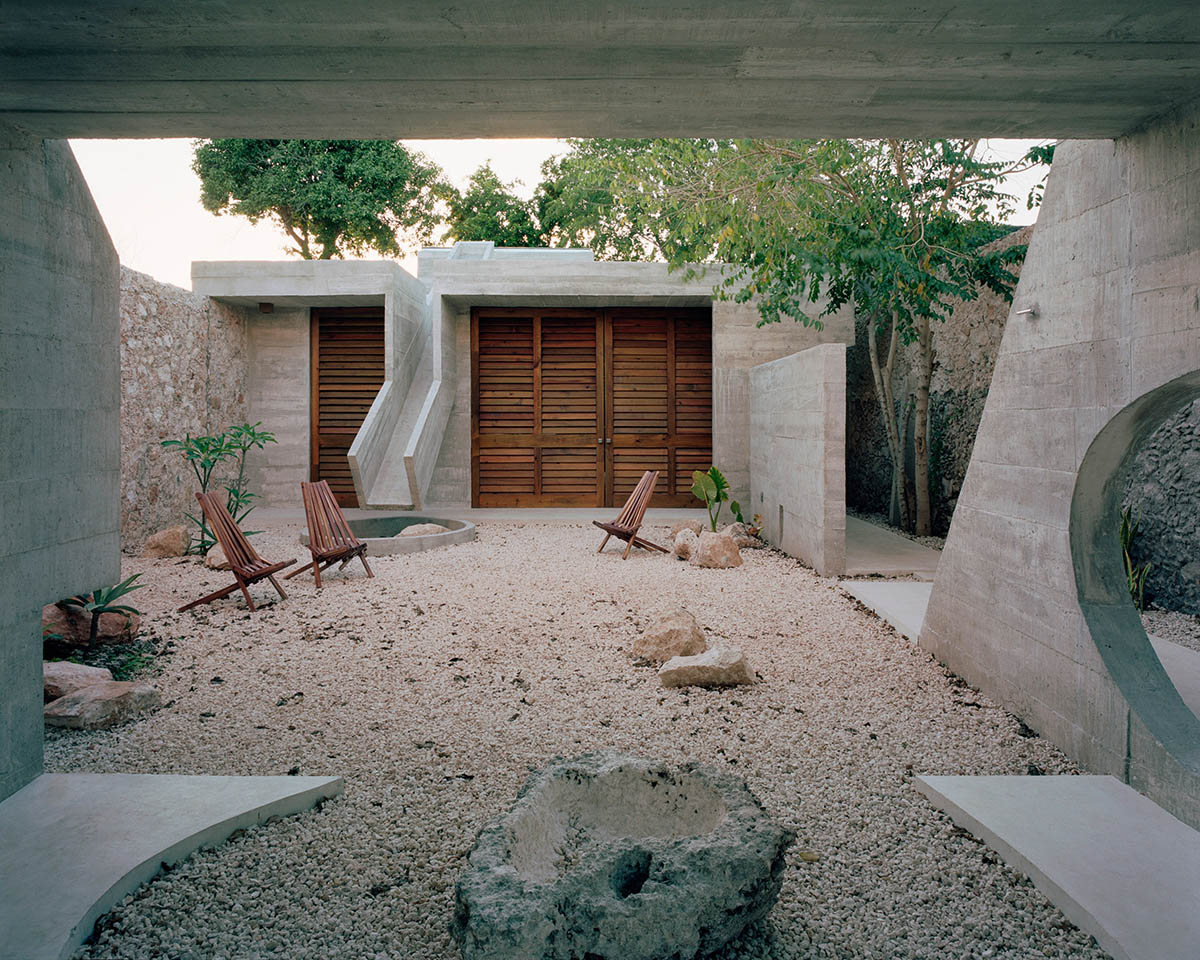 The last point was the electricity, resolved by using obvious but proper technologies, such as solar boilers to warm the water, as well as solar panels to cover the rest of the needs in electricity. The project is willing to get rid of the unnecessary, no finishing and no decoration, to only preserve the structural part, as well as only simple materials. Mayan cream stone walls have been built in a traditional way by covering the joints with the stone splinters, typical stone from Yucatán used in antic mayan pyramids and temples sites.

The brut concrete has also been used for the floors and the walls, definitely industrial but still localy produced in Mérida, the main structural material. Finally to control the light atmosphere, massive wooden louver windows and doors have been designed. The construction is reaching a 90% made on site, with local materials and built exclusively by yucatec masons and carpinters, a sort of modern reinterpretation of what could mean vernacular architecture.

Made of massive materials which do not require special treatments or maintenance, accepting ageing and time as part of the architecture process, the house has been conceptualized to end up one day covered by a new coat of materiality: a layer of patina.