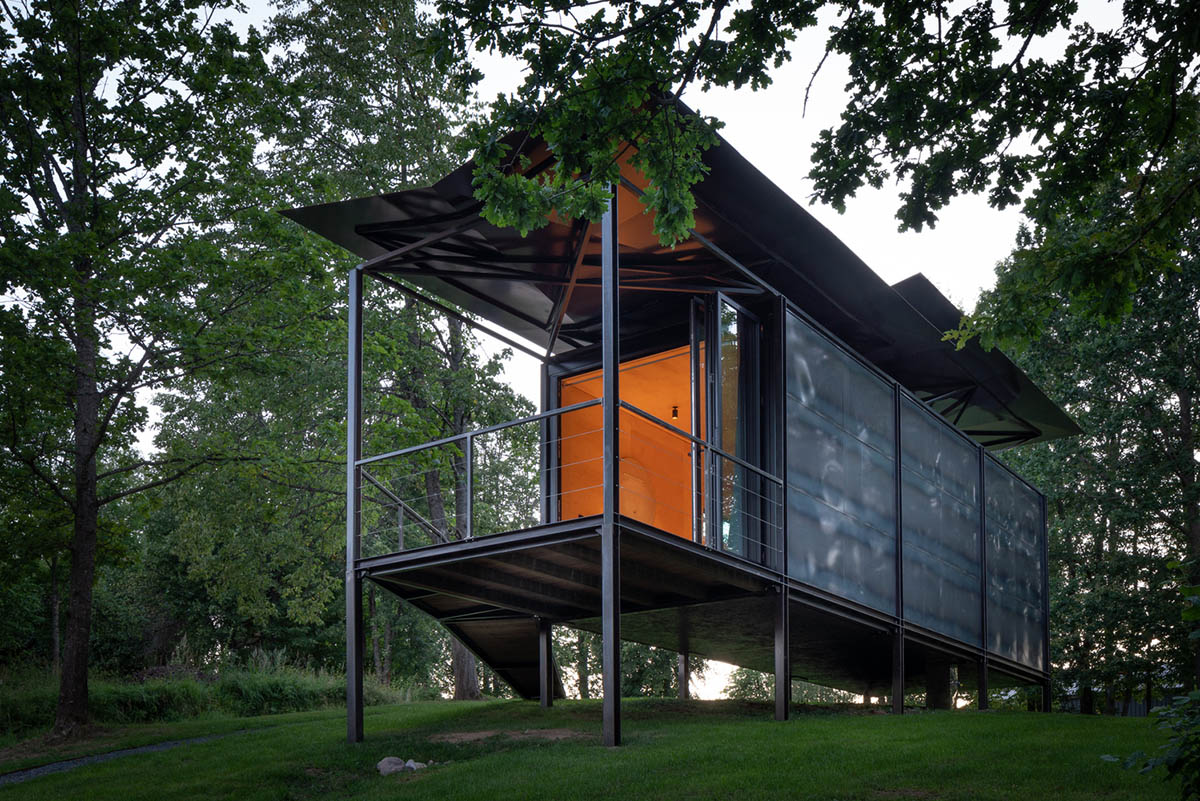 Called 019 Cabin, the 23-square-metre cabin is raised on slender columns to grasp the natural view in one way.

As the studio highlights, the client commissioned the architects to design a transportable cabin that would be constructed in a workshop and brought to the site. 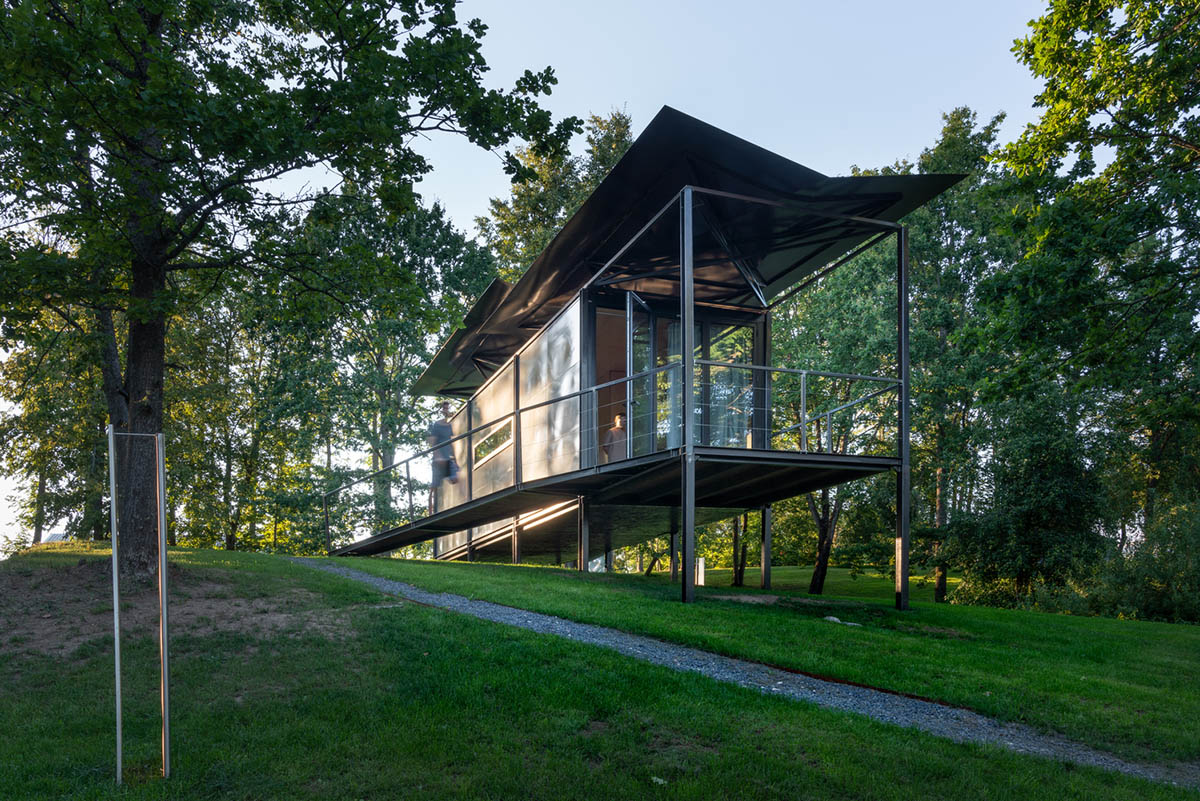 "This building had to be reproductive and be able to adapt to different contexts. The search for a solution led us to the design of a modular system," according to the architects.

Designed on a simple layout, the cabin is accessible via a ramp and an outdoor terrace while the back facade of the cabin has floor-to-ceiling glazed window. In daylight, the back facade entirely reflects the nature so visitors can not understand the function of the room at the backside.

"The modular system allows the construction of different sizes and configurations of the building. At the base design stage, it is unknown where the building will appear." 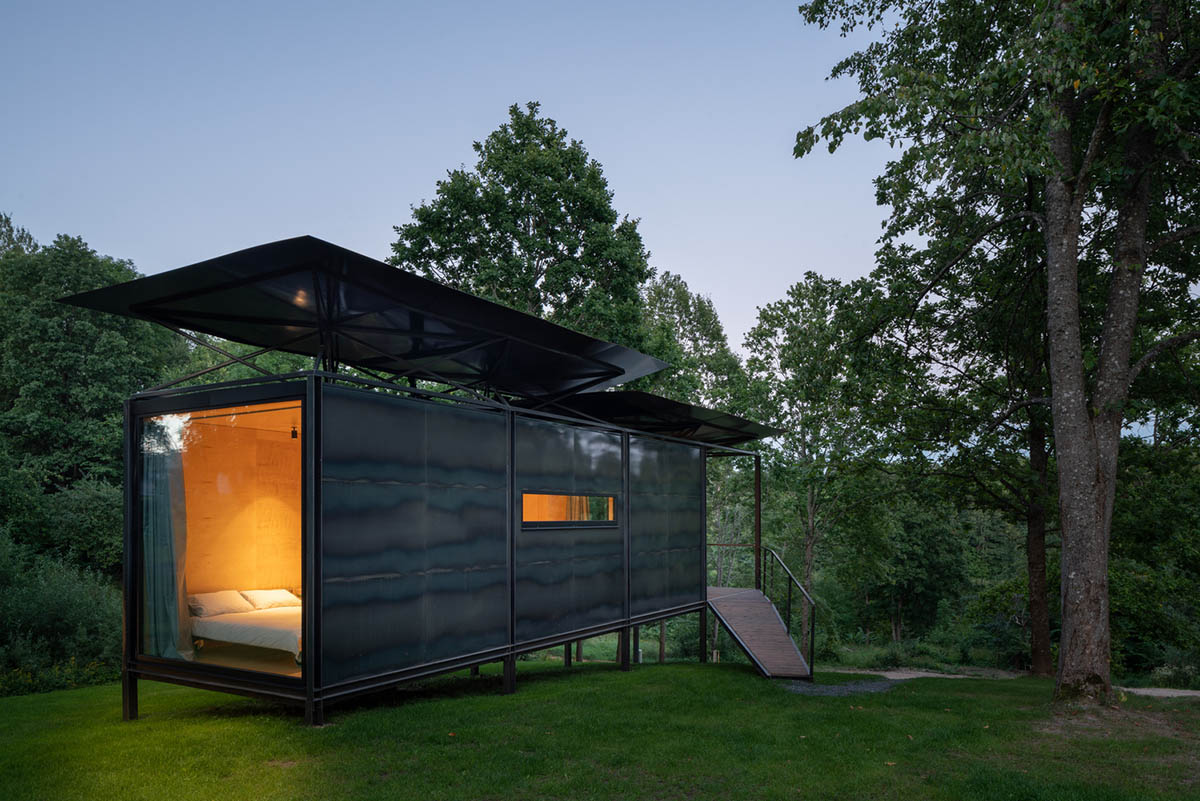 The studio stated that there were only contextual references to integrate to the brief such as sun, wind, and water. "As a result, the roof of the cabin looks like floating in the wind," they added. 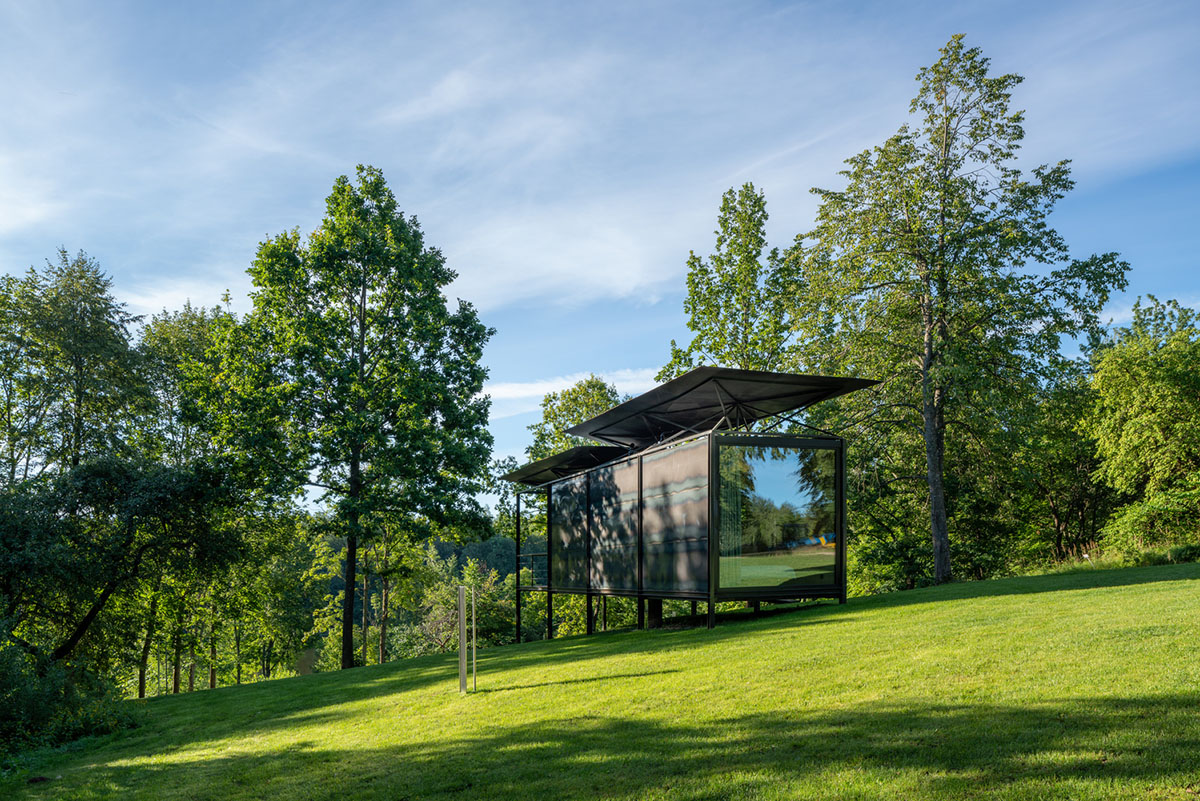 The roof also protects the structure from the heat of the sun and has a shape that collects rainwater, pours it from one plane to another, and exhibits water flow. The building adapts to natural terrain by standing on slender legs of variable heights.

The architects used metal in the construction and facade which is non-colored, leaving a unique pattern created during its manufacturing process. 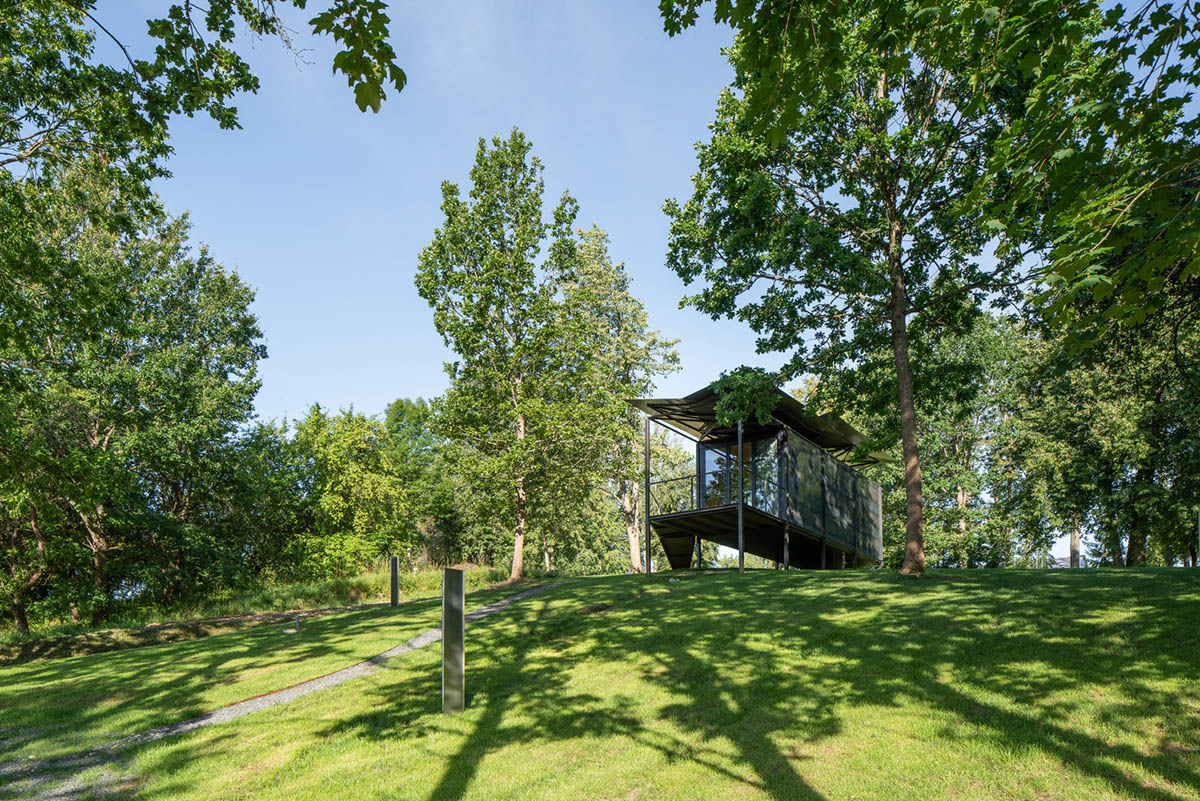 "This way, all modular cabins have slightly different facade graphics," they explained. "Inside the metal shell lies a warm natural plywood finish."

The first cabin made its way to the lake island “Apple Island” in Lithuania with exceptional natural surroundings, characteristic terrain, and native trees. 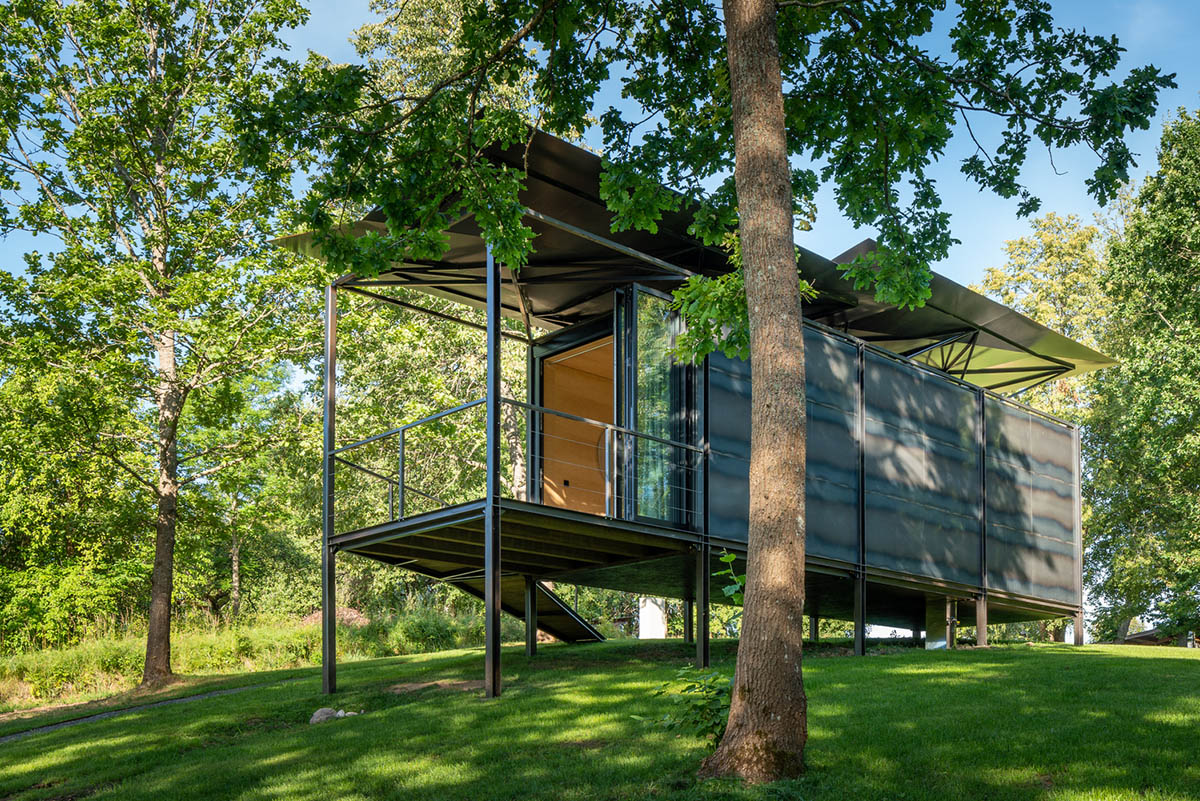 "This situation revealed the advantages of architecture: the site did not require local construction works, and the visually light volume of the building blended harmoniously into the unique natural landscape," according to the architects. 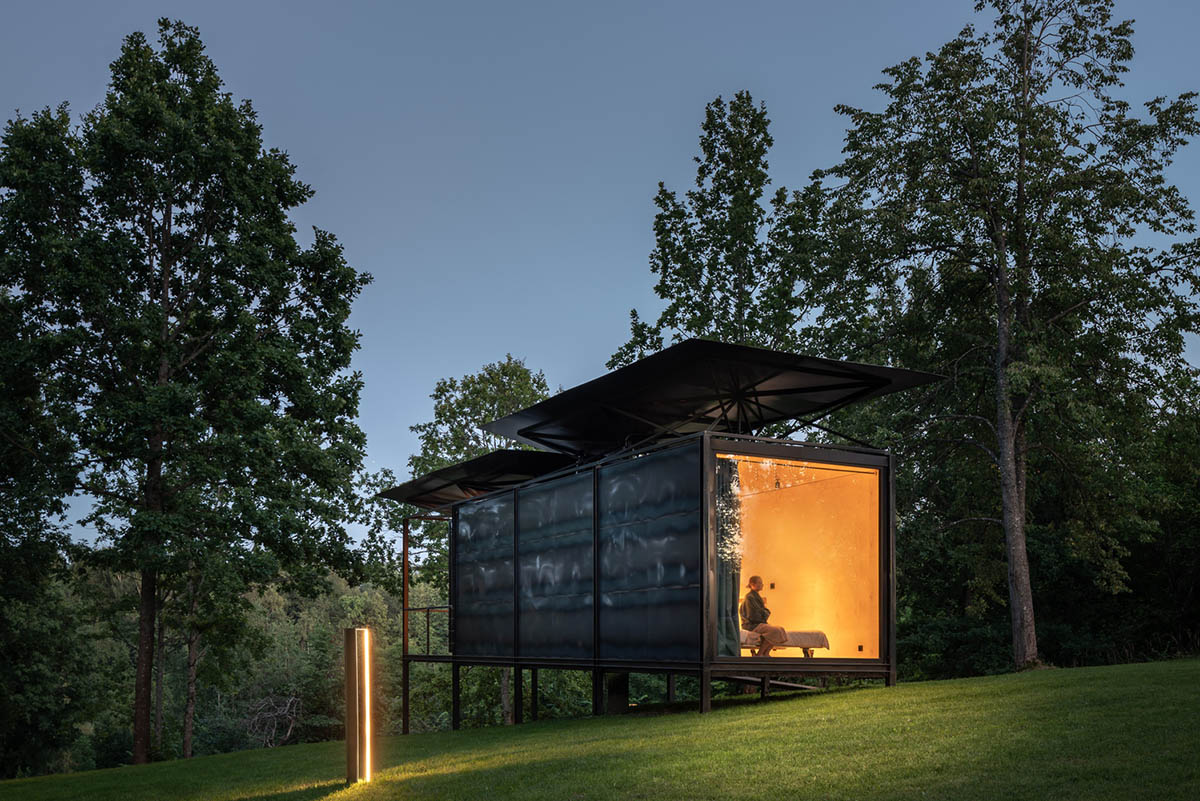 All interior components were designed individually for the cabin, it holds a program of two double bedrooms, a living room, a kitchen, and a bathroom.

This extensive function was made possible by transformable furniture. The folding glass door opens full width and the interior expands to an outdoor terrace overlooking the lake. 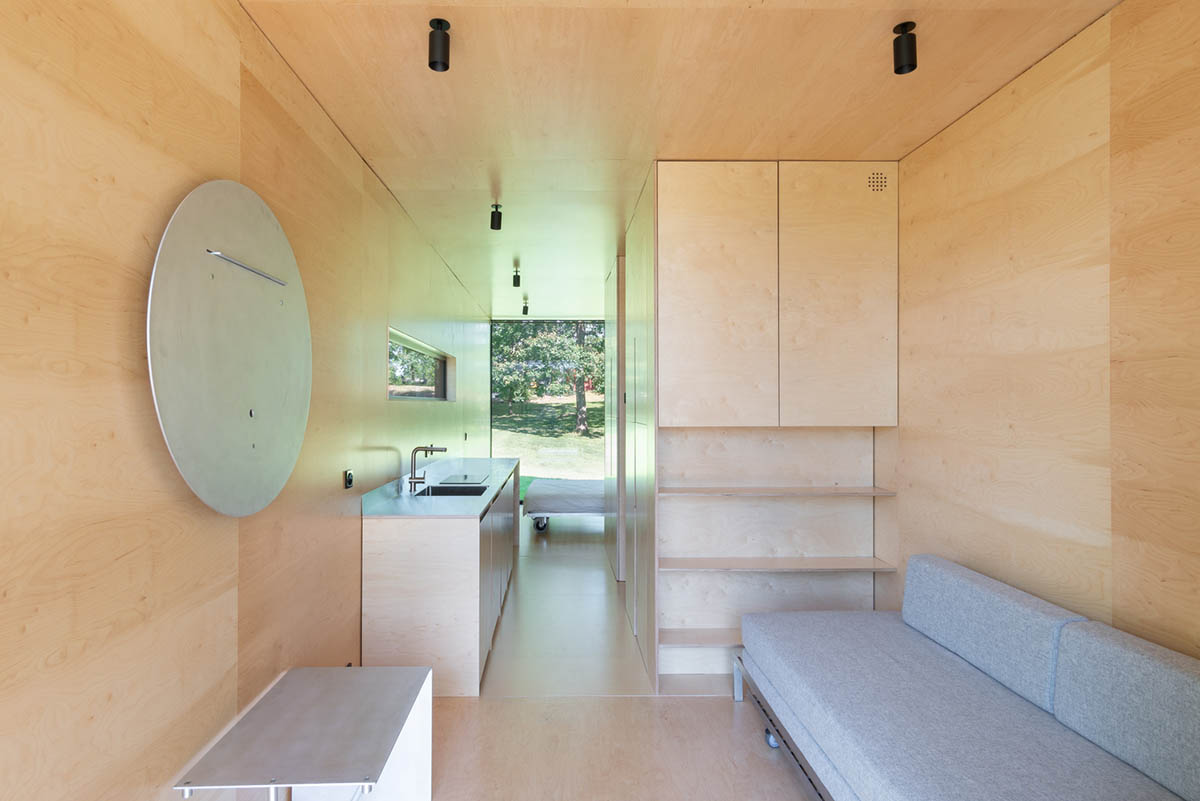 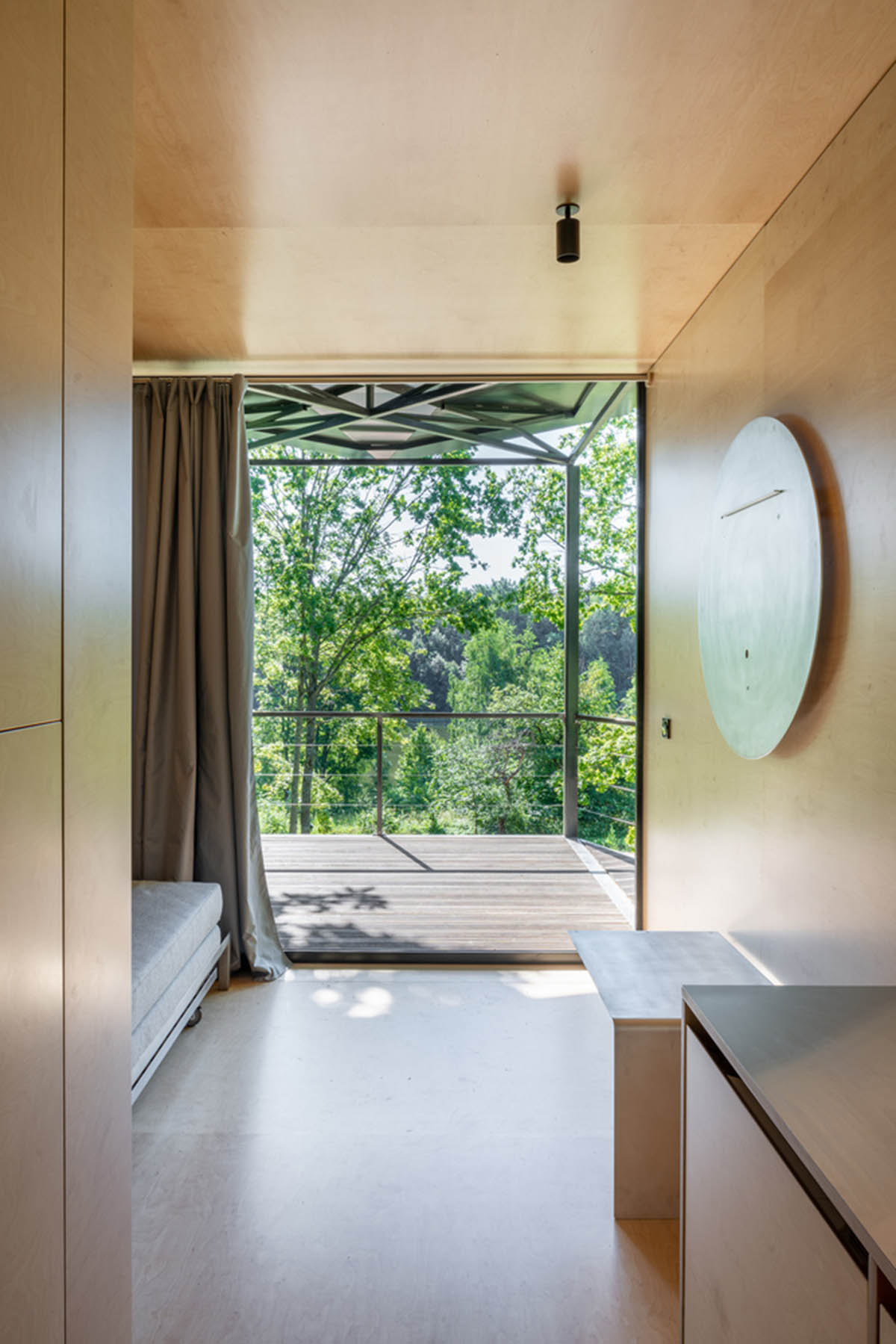 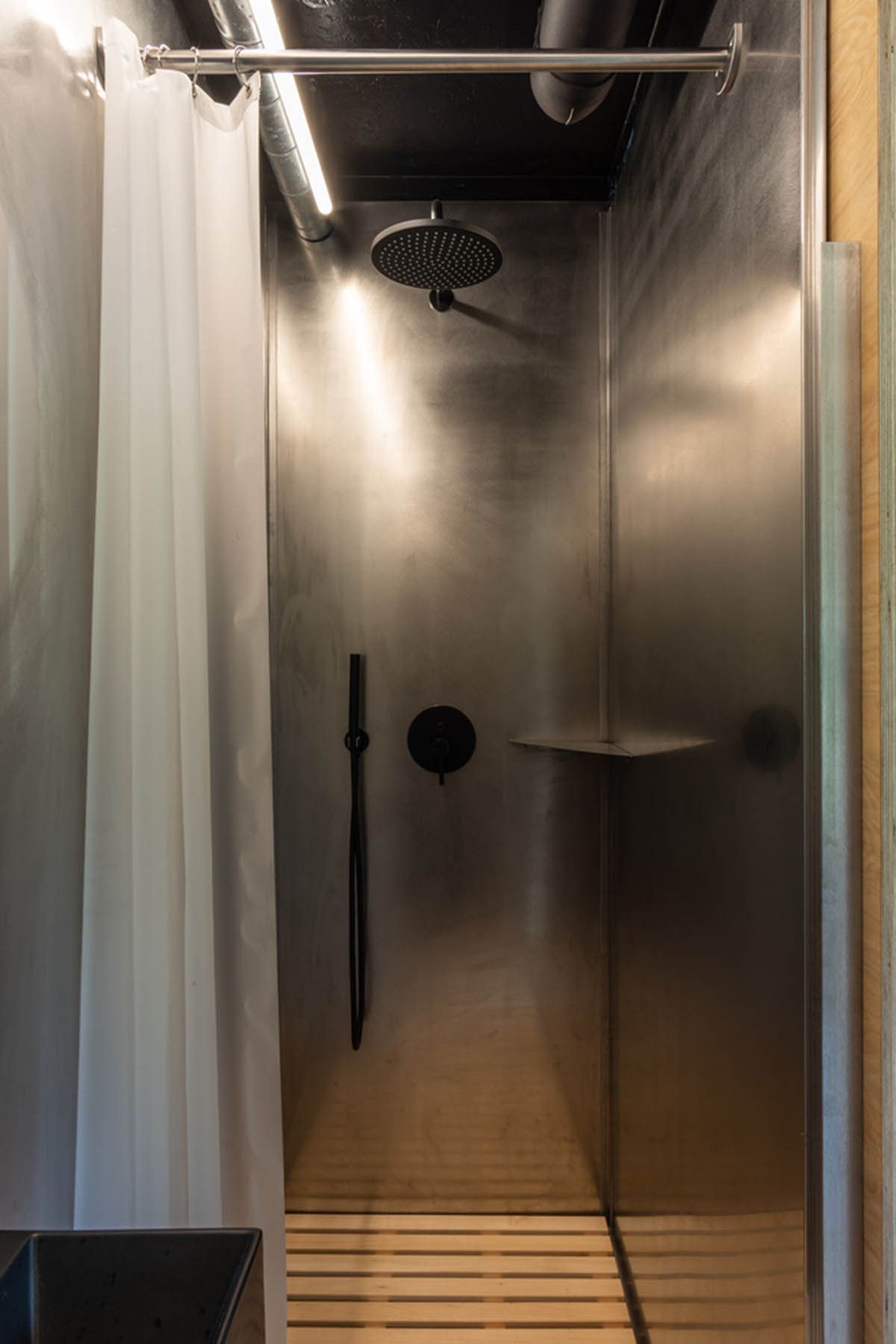 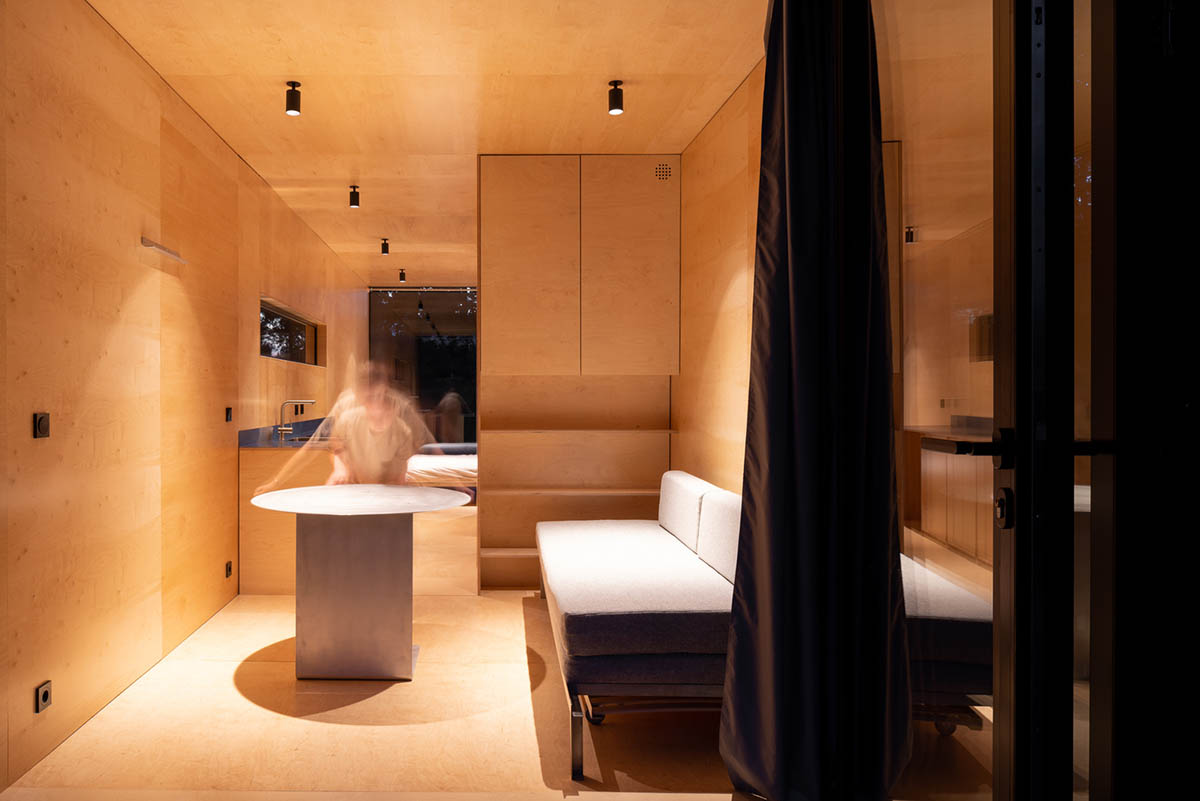 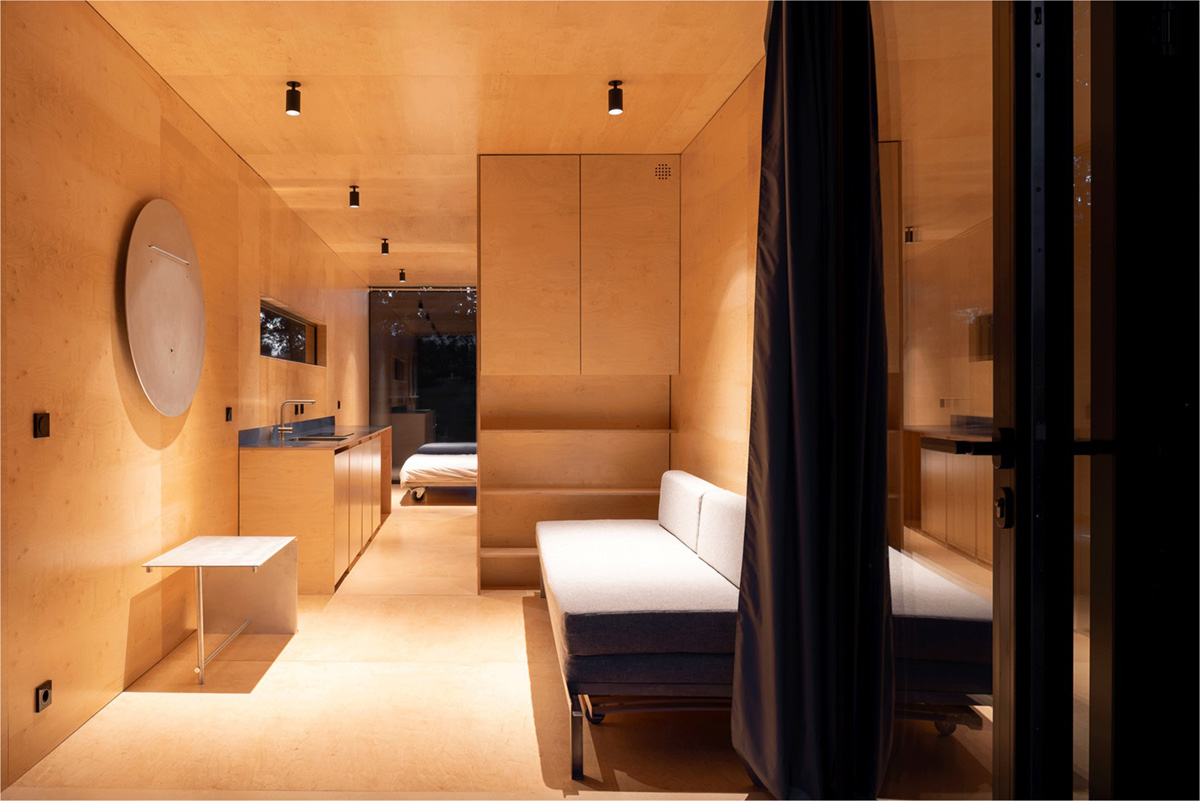 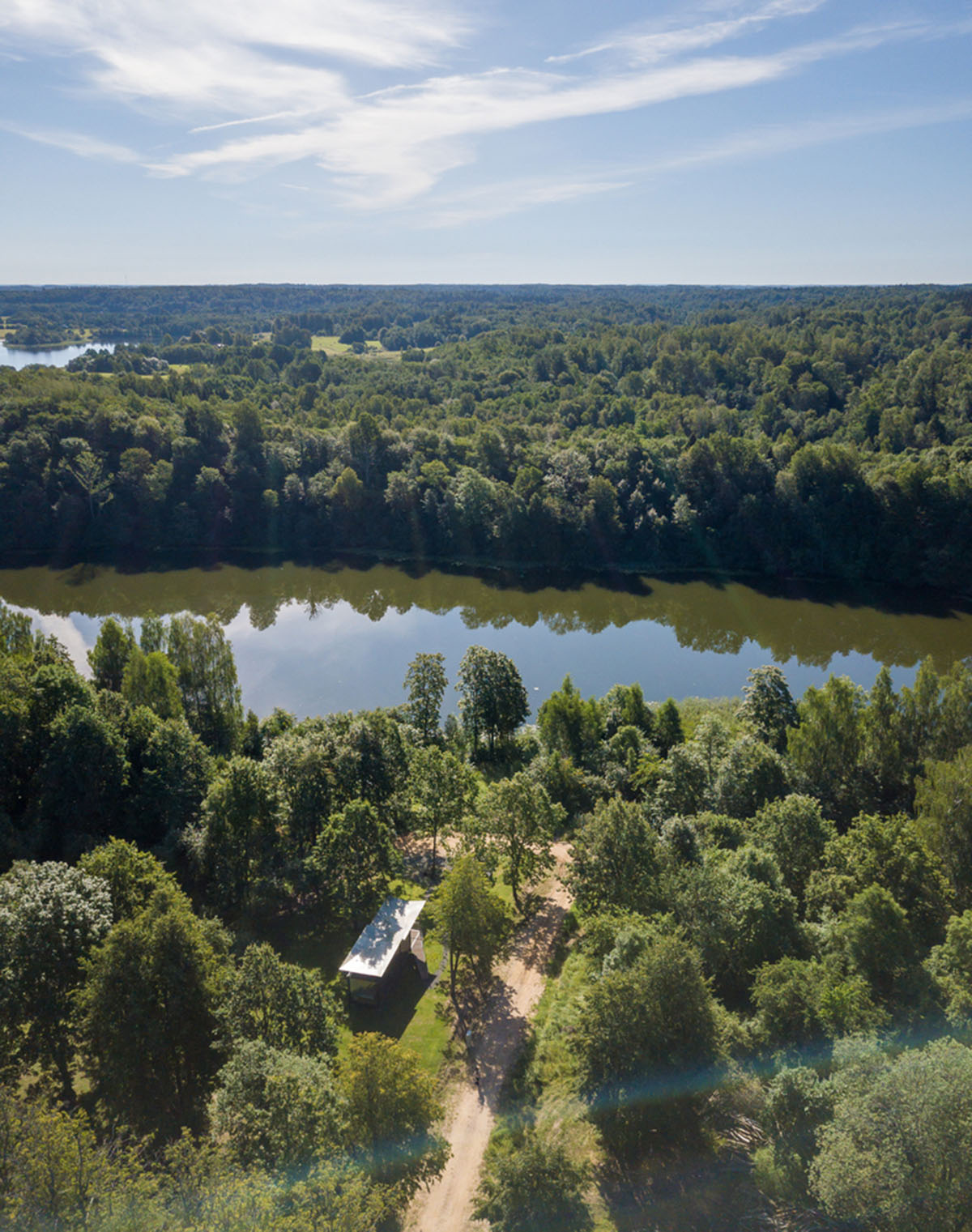 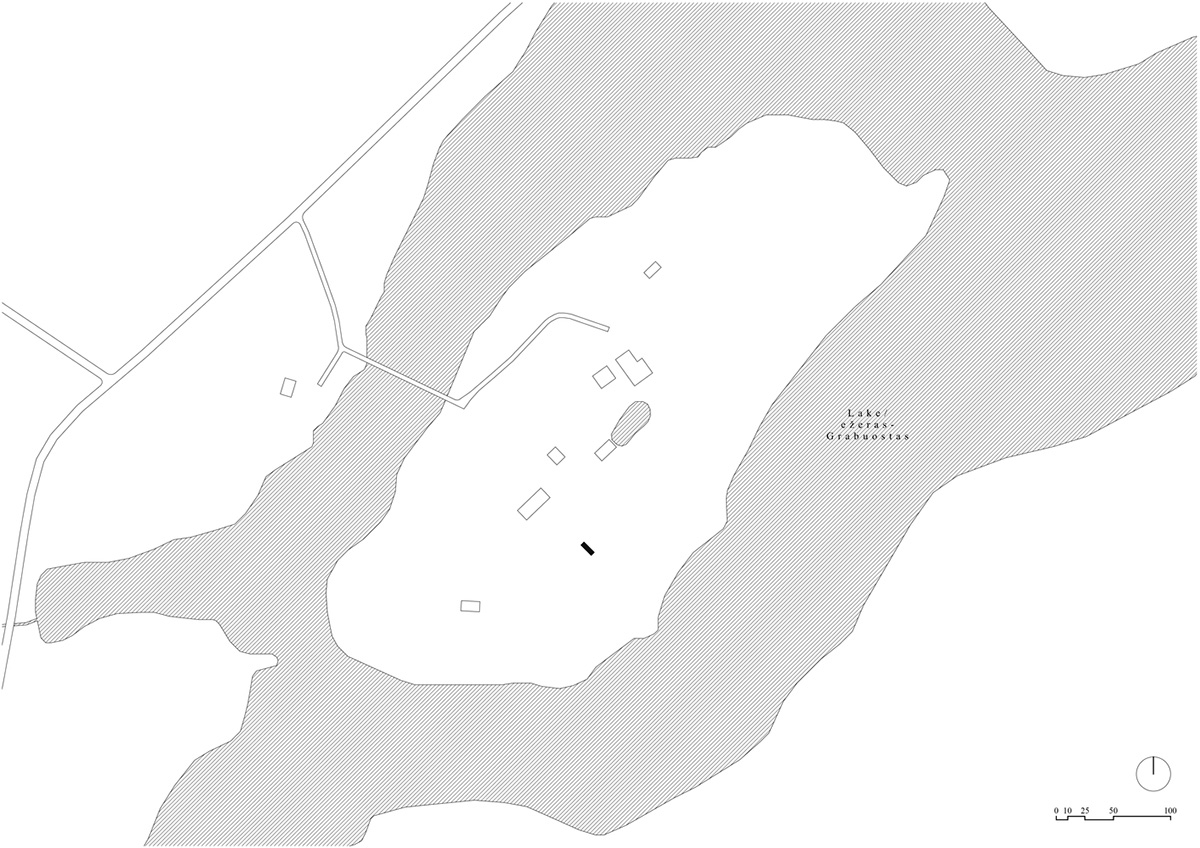 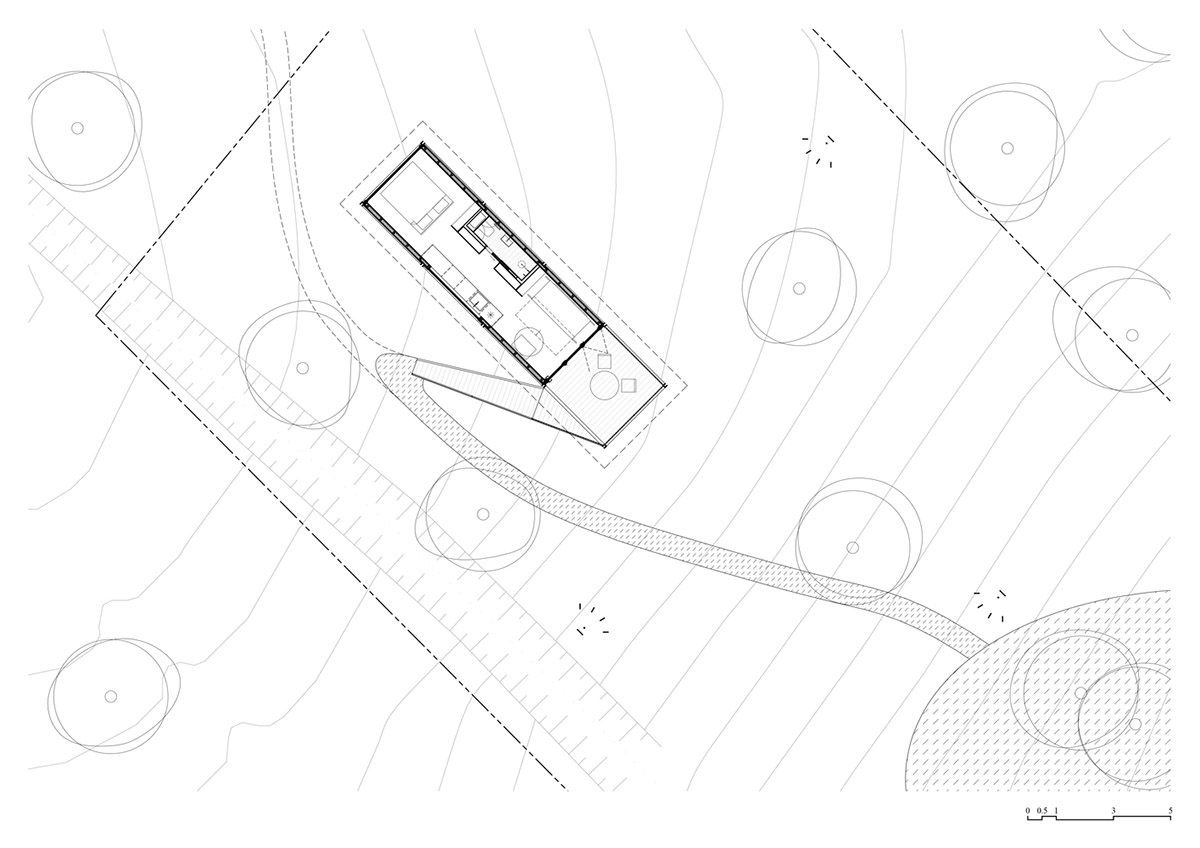 All images © Vaidotas Darulis, Š A atelier unless otherwise stated.