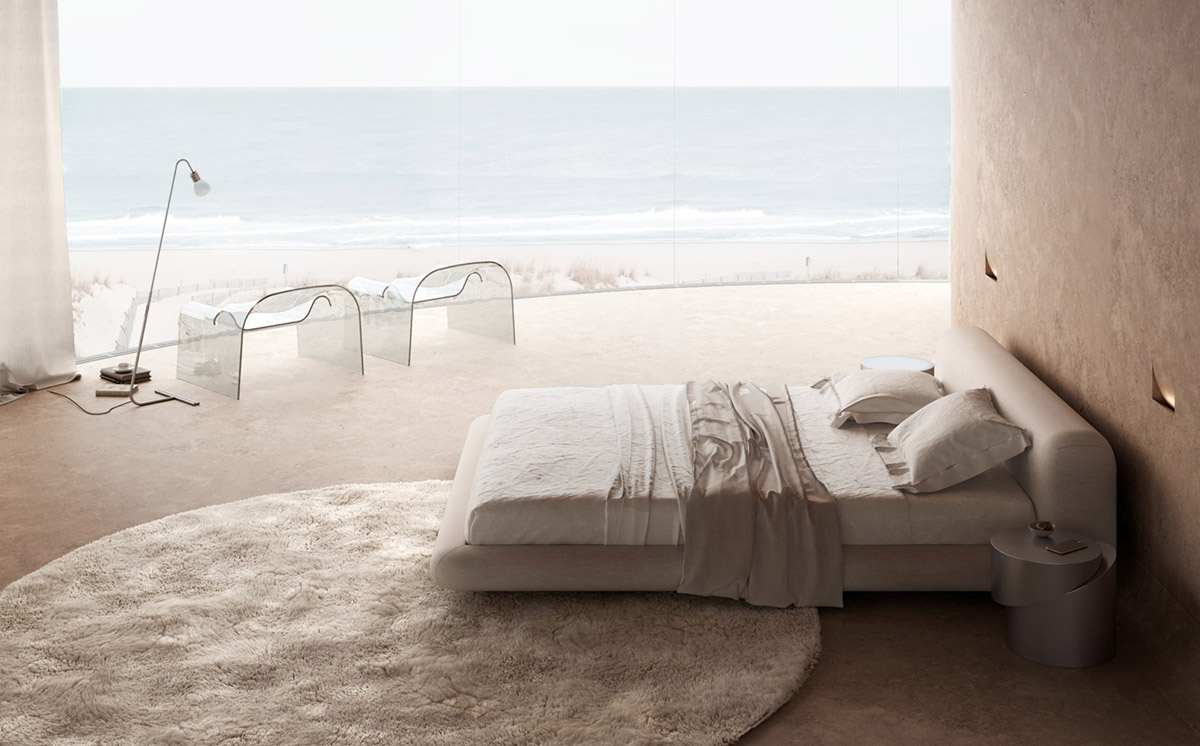 Named Hotel on the Beach, the 136-square-metre interior space has been designed as the first part of a large hotel project, which the studio started to design half a year ago. For the interior design, the designer Alexey Gulesha - Principal of Sivak+Partners Studio - was inspired by the interiors of James Bond films of the 80s. 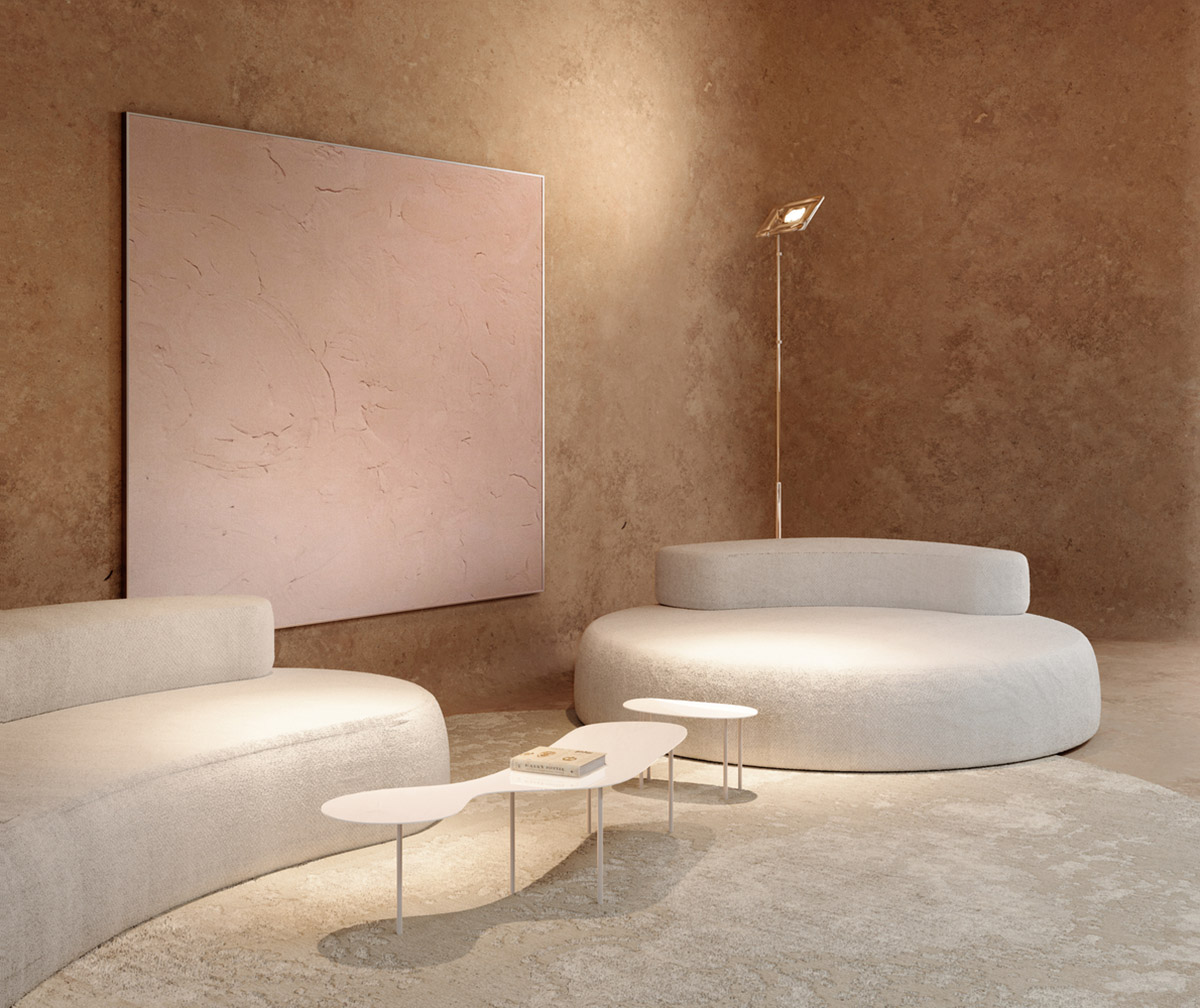 "I wanted to make one number different from the rest. He will be luxurious, liberated, but at the same time ascetic. The main idea is to emphasize the contrast between the brutal, cave-like walls and the many cozy corners," said Gulesha.

"I like to feel the surface of the material tactilely, not visually, and compare the materials by touch. I call it tactile contrast. So, for example, a soft carpet will seem even softer if you come up to it on a hard, cold concrete floor."

"I also like to draw people's attention to the fact that the materials by touch may not be what they seem visually. For example, these Cini Boeri chairs look like a cold piece of glass, but they are surprisingly comfortable and comfortable. The glass is curved so ergonomically that it seems almost “soft," he added.

The room is designed as a half-rounded structure. The bed is placed at the center of the room and curved, a cave-like wall divides the space. A bathtub is already liberated from the space and looks at the beach. 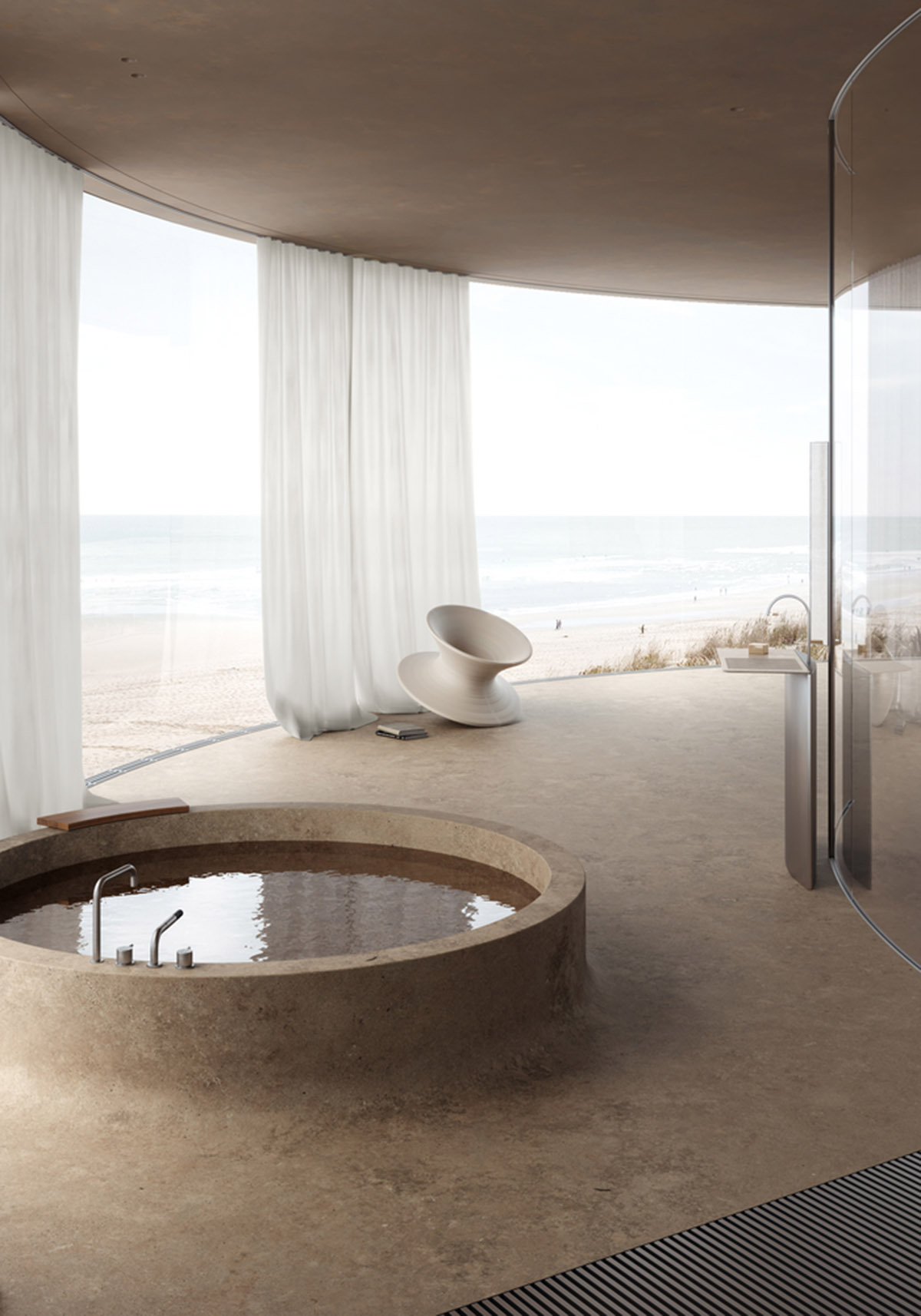 "I wanted to make one number not like the rest. It will be luxurious, liberated and show a contrast between a brutal "cave" looking walls and a many cozy corners and zones in it. Bedroom I like to feel the surface of the material tactilely and not visually and compare materials by touching them. I call this tactile contrast."

The glass is curved so ergonomically that it even seems soft. For bathroom the designer really wanted to make bathing in this room look like bathing in a hot spring, so he made the bath bowl in the same material as the entire floor in this room.

It grows smoothly from the surface of the floor and is very similar to a small pool that arose in the floor under the influence of natural forces. Also there's a smart glass between toilet and bath area, so when someone comes into the toilet the glass becomes opaque. 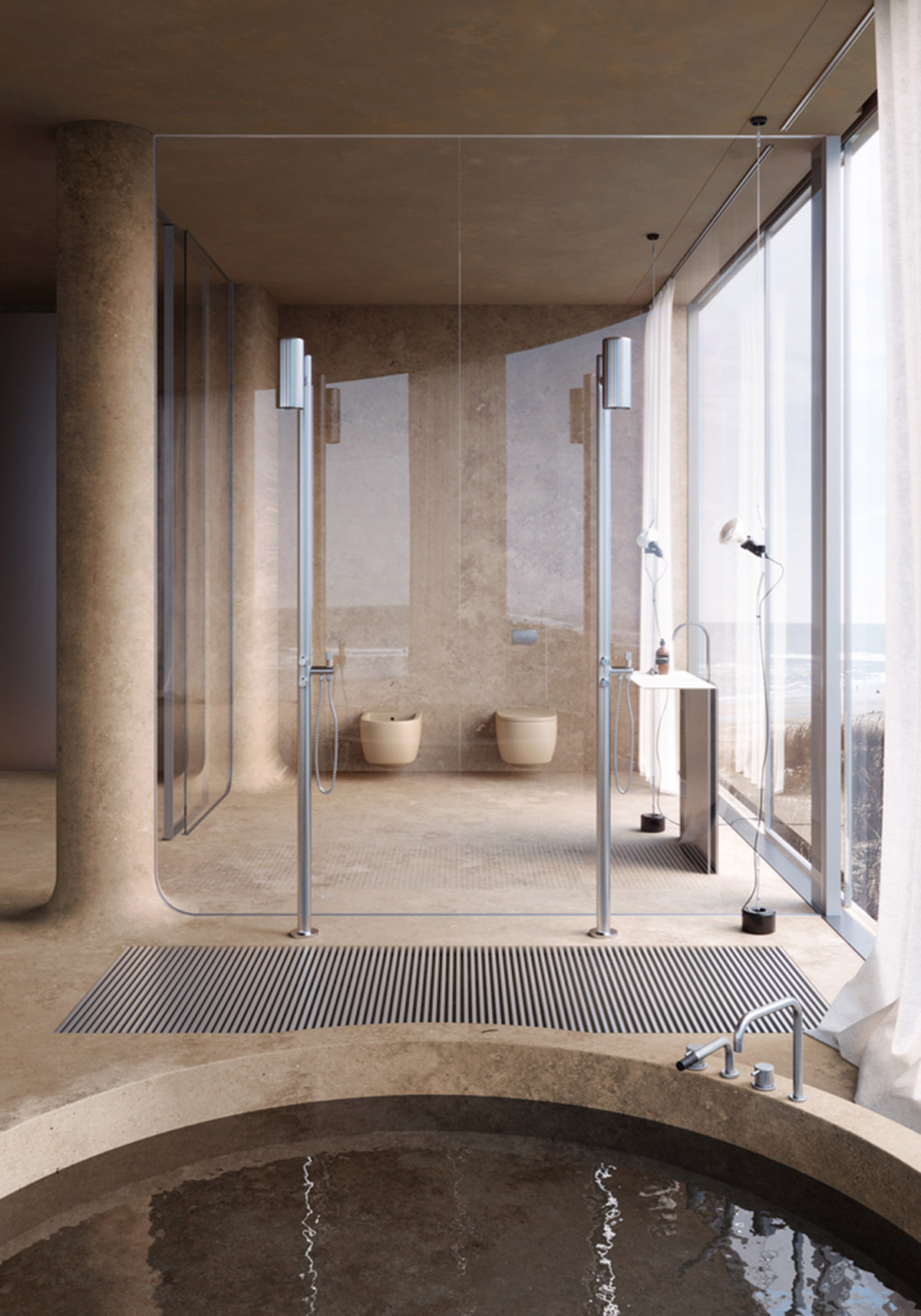 A workspace was designed without any chest of drawers, because this hotel situated on a beautiful beach and the designer wants the clients to spent more time there rather than work. It is only for skype calls, emails etc, according to the designer.

"The idea of the materials is that in this digital era, when work means siting on the PC and answering email for 2-3 hours I want to see and feel something natural, which will deliver my thoughts somewhere over this table and screen, so I think that would be cool to sometimes touch a brutal rock plate to feel how powerful nature is," added Gulesha.

"I also like how the steel desk cut this big slice of rock and emphasize the contrast between human technology and power of nature."

The interesting detail is that there's a hidden shelf in this rock, so the books are like growing from the stone. In kitchen, there's a few restaurants in this hotel, so this kitchen is just for some small personal needs like small snacks, coffee, cocktails etc. 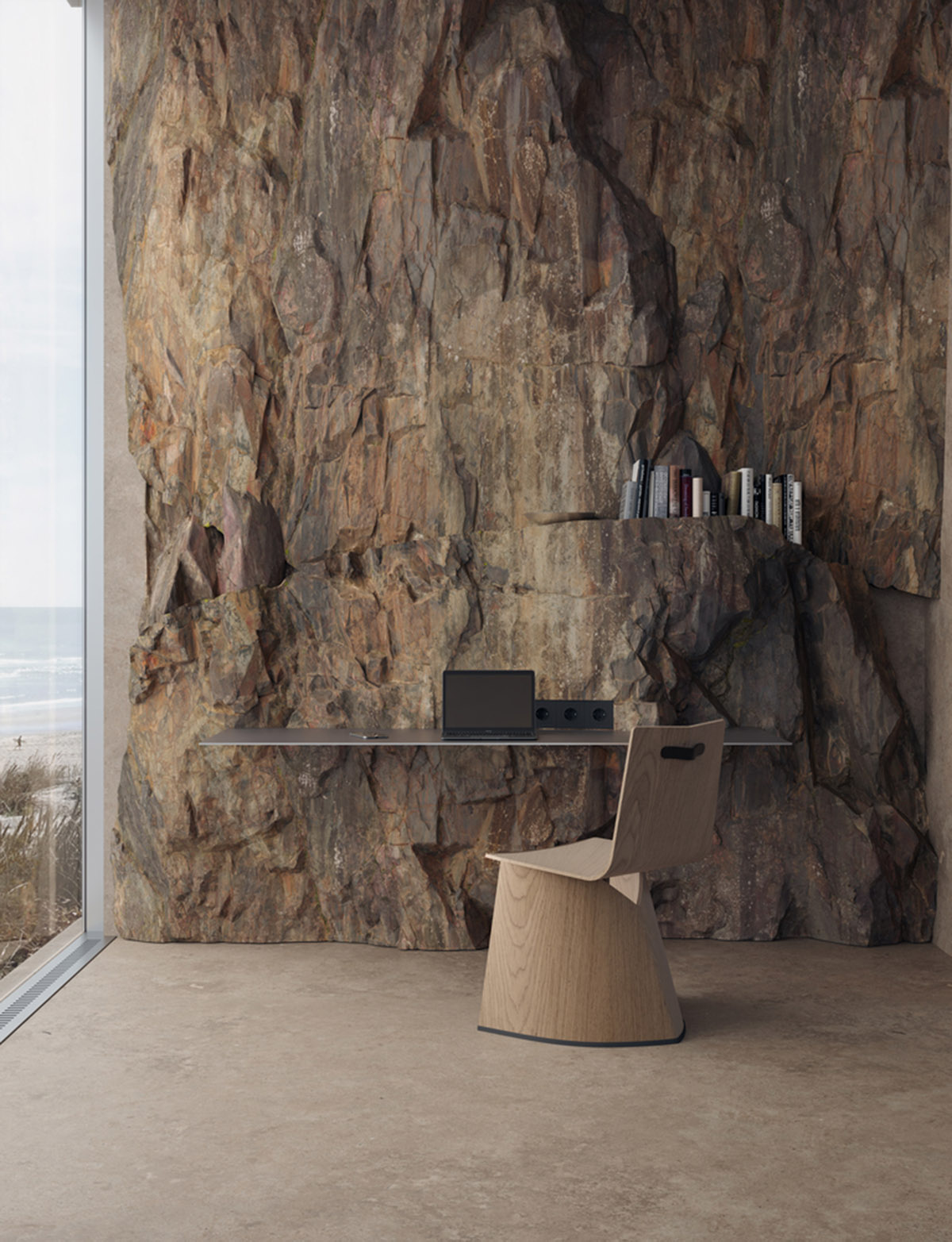 There's even no dining table because of this. The lounge area is situated in opposite of the kitchen looks cozy and very convenient. It is designed for evening chill, reading, texting and other.

Art on the walls is a very interesting detail as for the designer. First of all the kitchen area is very strong and a bit aggressive by form and light, so he wanted to create a contrast between kitchen and lounge zones and the soft color of this painting have emphasized it. Also this art shows what circles is world of art going through for thousand years. 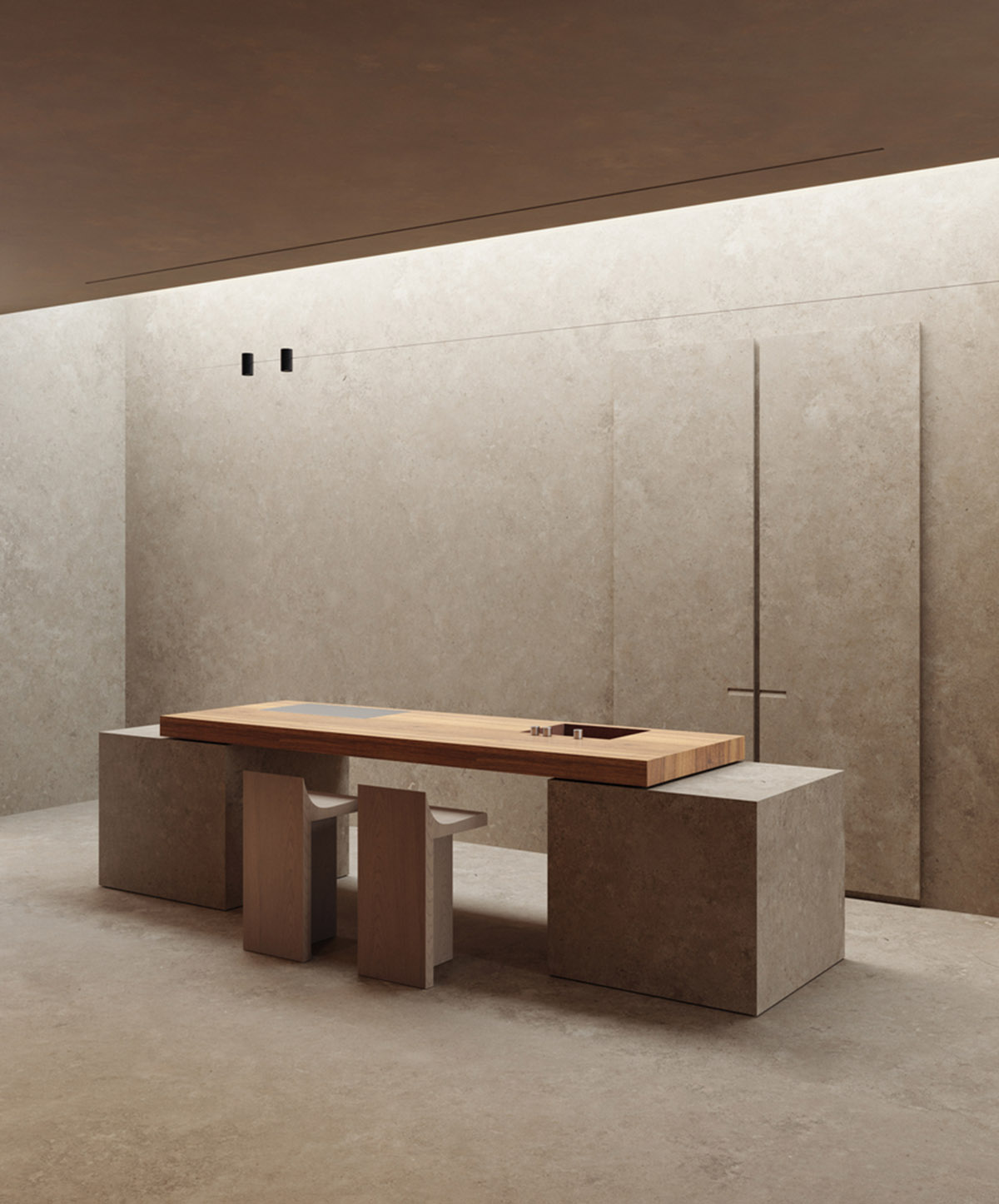 "If you look a bit on this painting you'll mention that the facture of the walls and this painting are very similar. So if this brutal natural cave-looking walls were very ordinary a few thousand years ago, now we see them so rarely that we even have to paint them on the canvas," explained the designer. 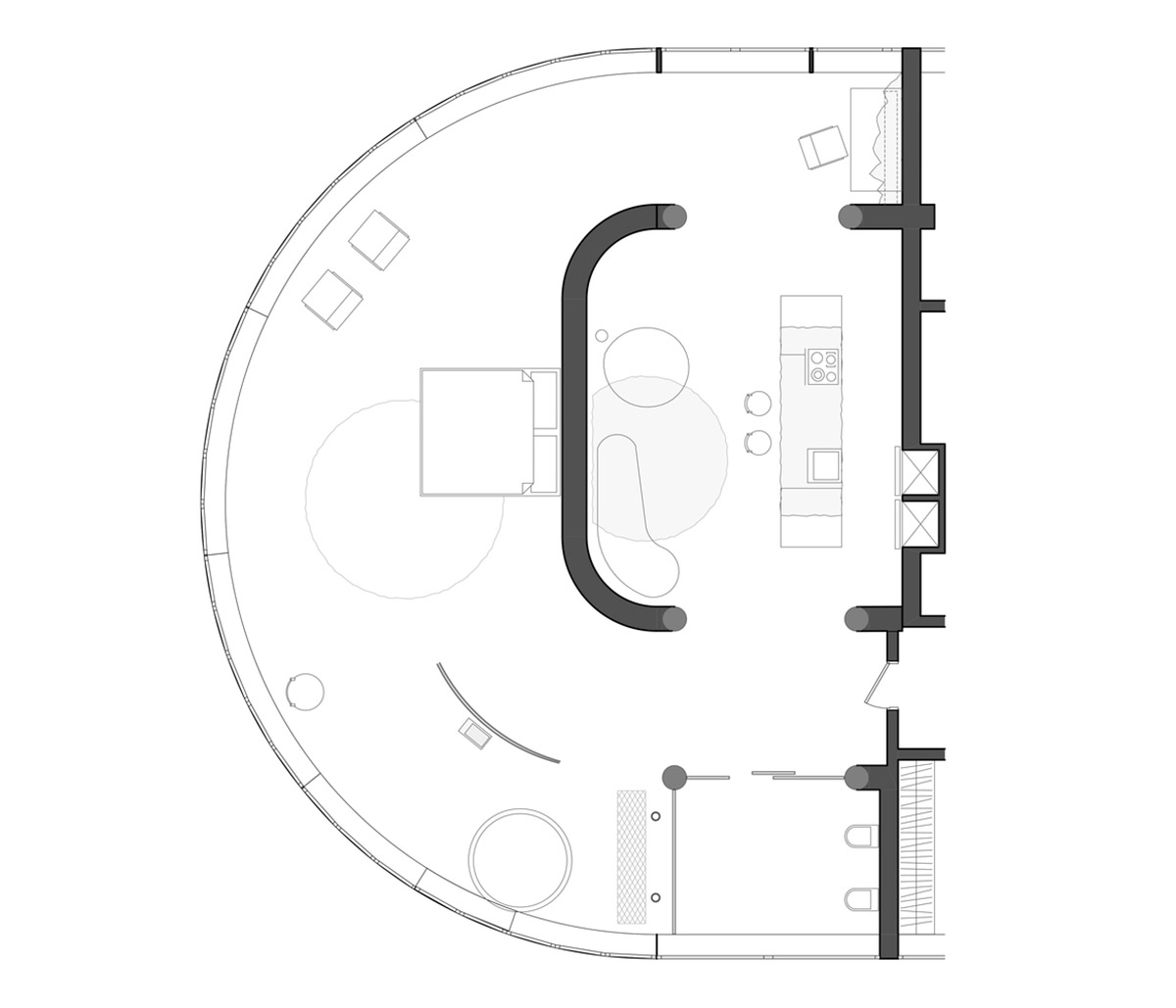 Floor plan of the room