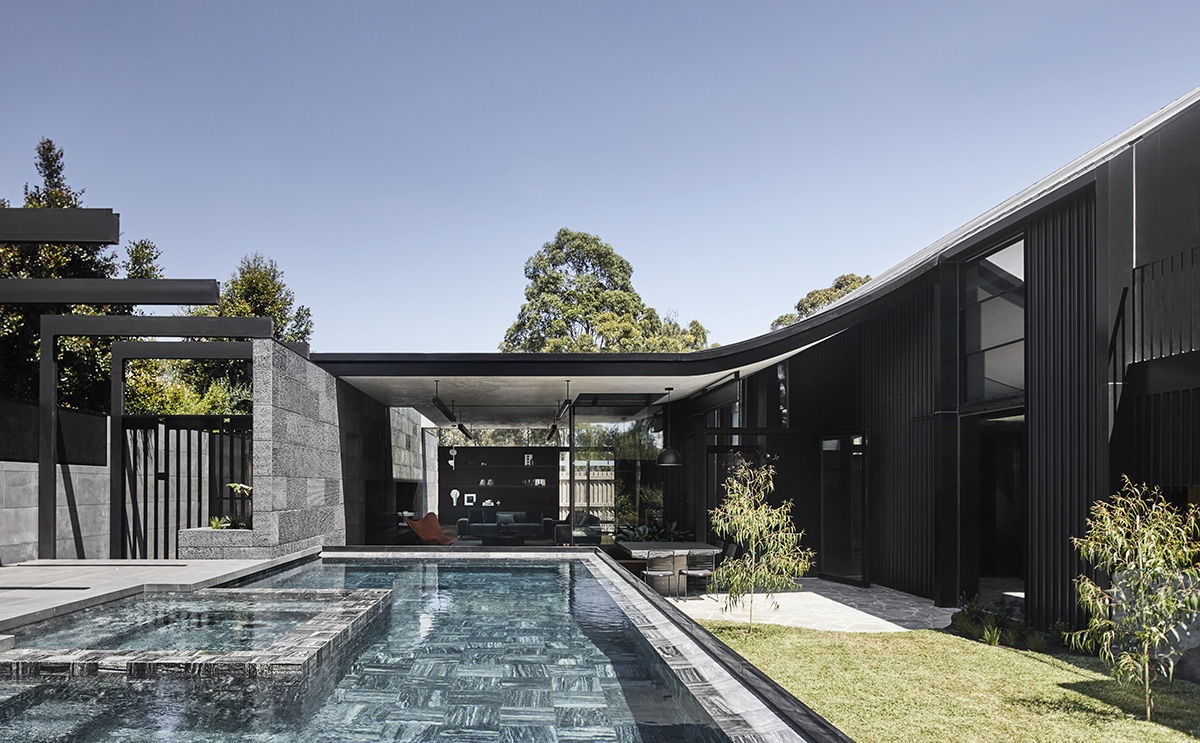 Melbourne-based architecture and interior design studio Splinter Society Architecture has completed a residence clad by blackened timber slats in the north-side suburb of Northcote. Northcote is a residential and industrial suburb 8 km north-east of Melbourne, Australia.

Named Cornerstone House, the house emerges as an ode to the rugged beauty inspired by the project site itself, referencing the quarries that once typified the area. 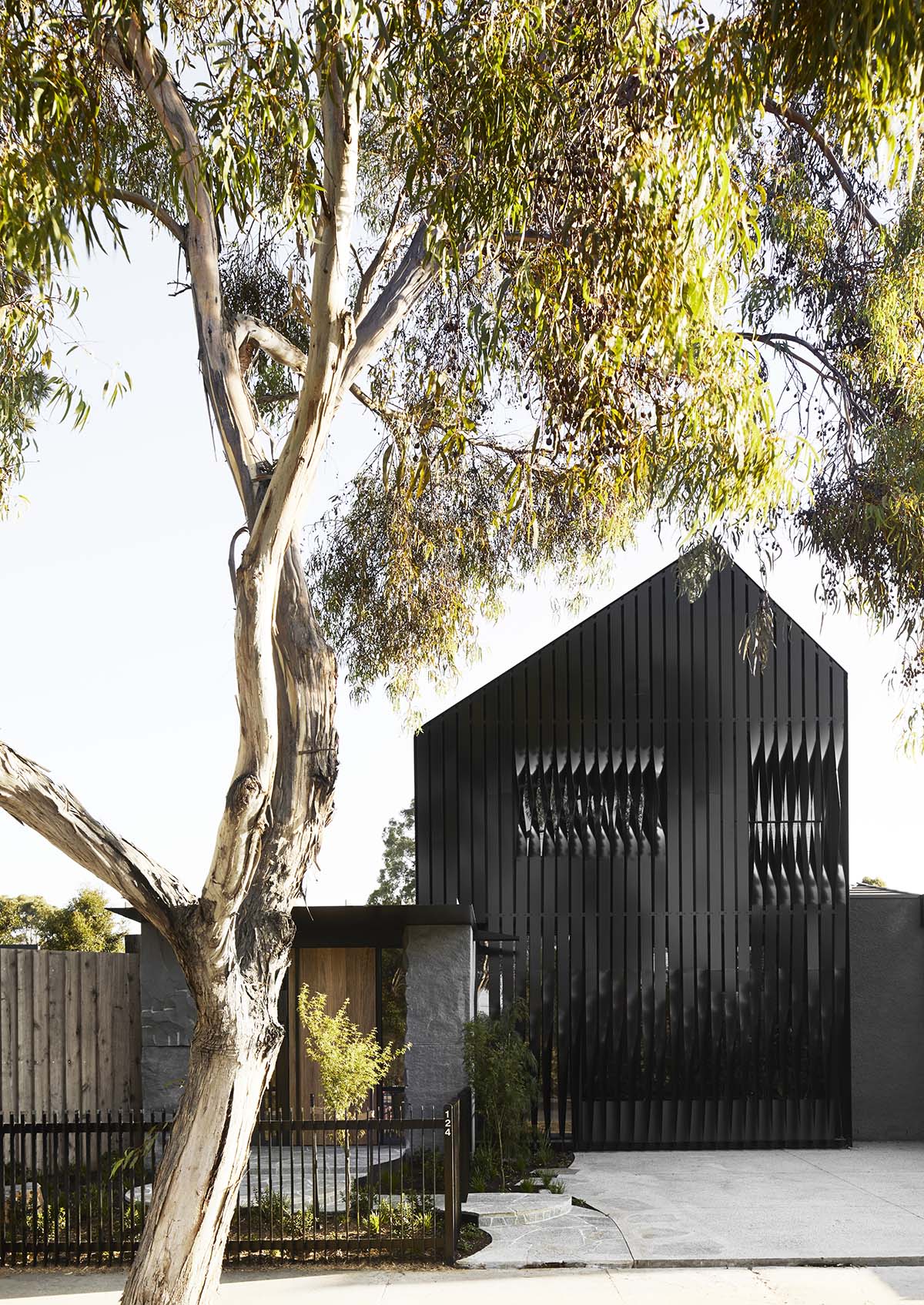 Entry to the Cornerstone House is surrounded by massive raw stone boulders which are countered by the thin black metal fins that veil the living spaces tucked within the pitched roof structure.

A stone quarry is an awe-inspiring place where raw meets refined at an impressive scale. The approach to the design is likewise to push the opposing notions into a harmonious balance that adds rich experiential qualities into the fabric of the building, ultimately creating an enhanced living space for our clients. 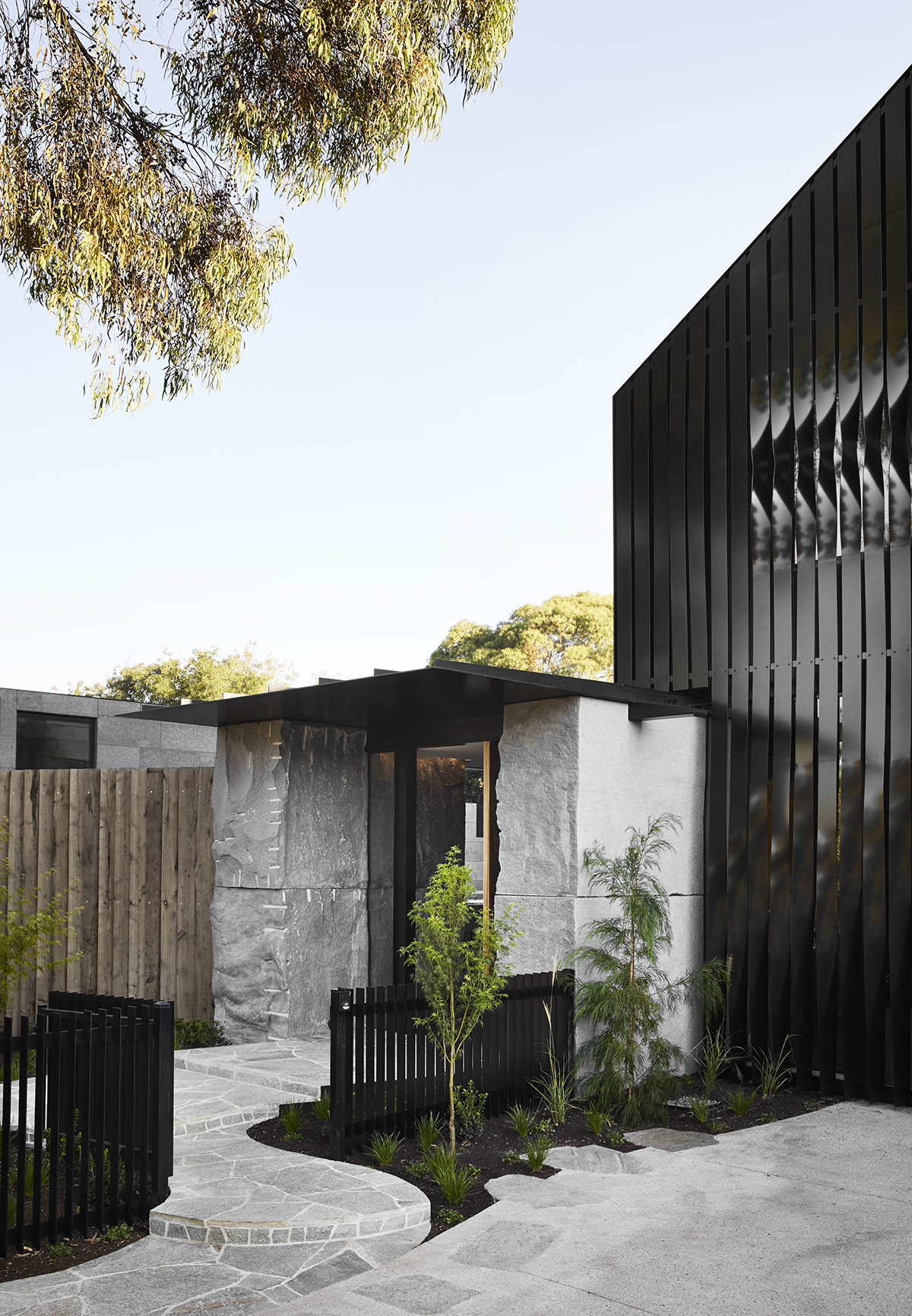 Literally, a Cornerstone House, the starting point for the design is a series of a dozen large boulders positioned at key moments throughout the project.

The massive rocks are largely left in a rough state just as they are when extracted from the earth, preserving and highlighting the markings from industrial tooling.

At points these are partitions, joinery, flooring, landscaping and even occasionally furniture. In construction, the cornerstones were first craned onto site and the structure was built around them. 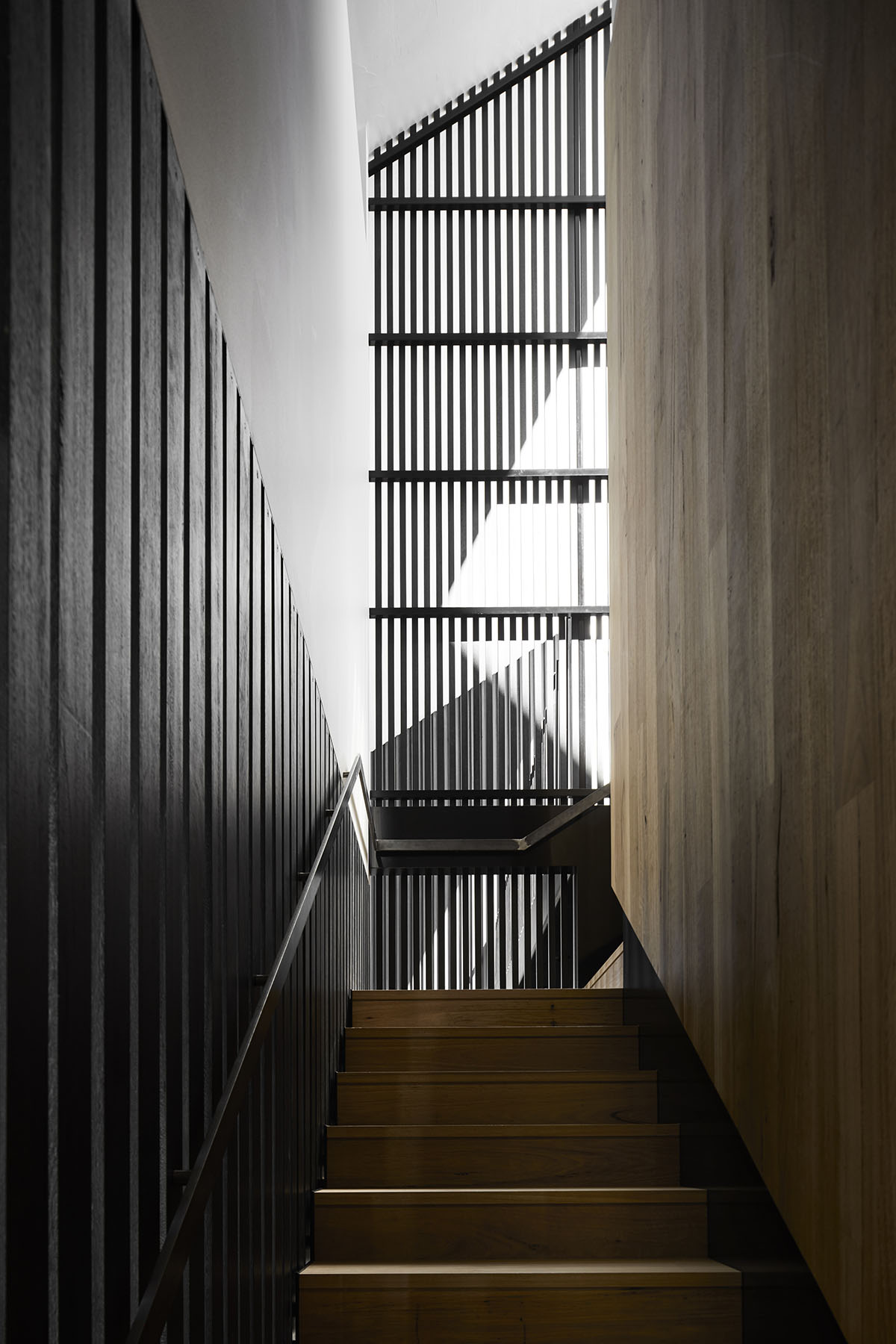 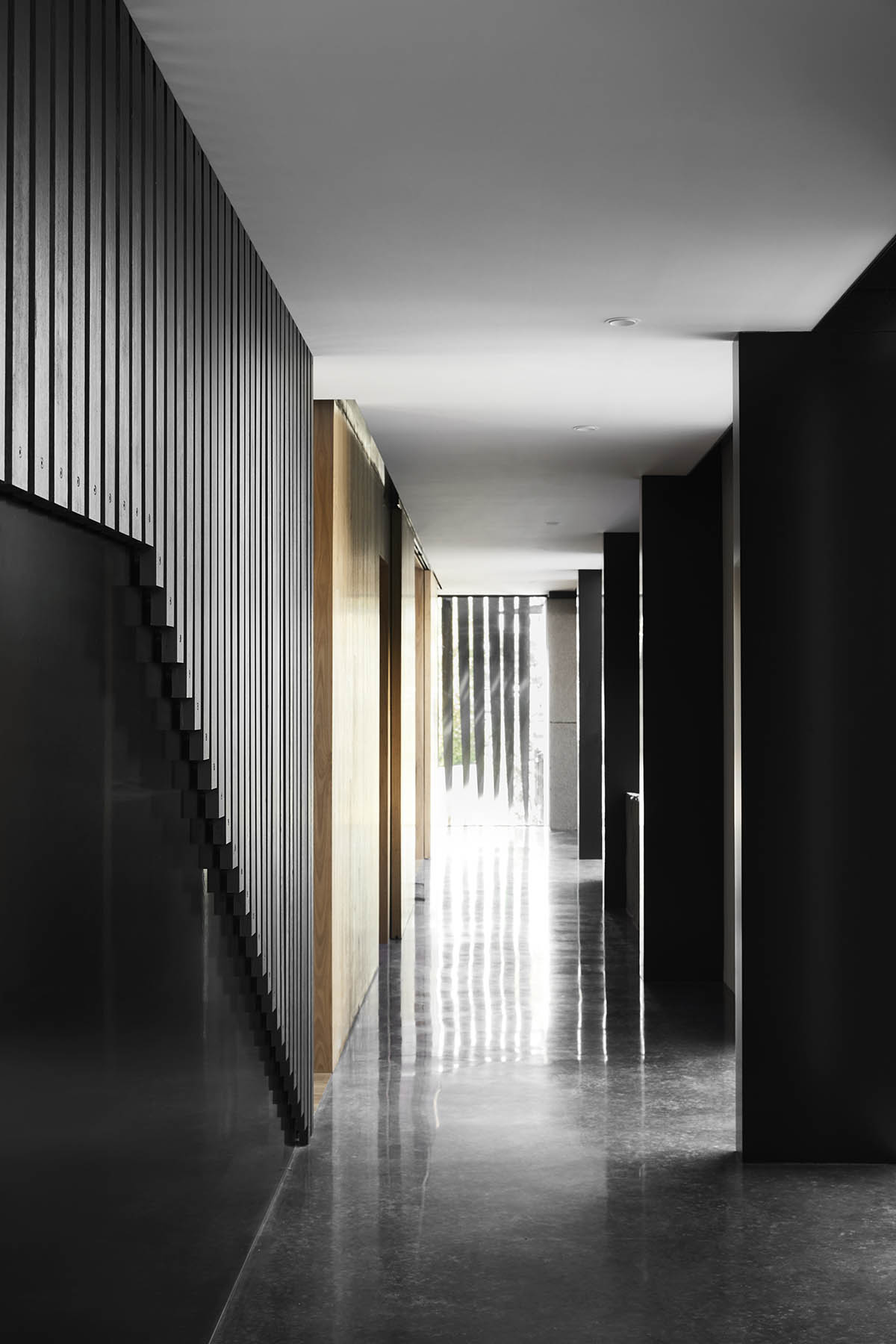 In the interior, black timber slats pick up on the rhythm of the metal fins which can be seen upon entry into the Cornerstone House.

As a counterpart to the natural, split face stone, the architecture creates a fine-line, rhythmic vernacular with black steel cladding externally on the two-storey volume. This is carried into the interior spaces with blackened timber slats and fine steel handrails.

Carefully considering refinement and balance, the house is infused with warmth through the use of natural timbers, rose-tone metals and colourful soft furnishings creating a strong variation in texture and finish. At times these are activated by changing light conditions through the day and at others they create more tactile interactions for the inhabitants. 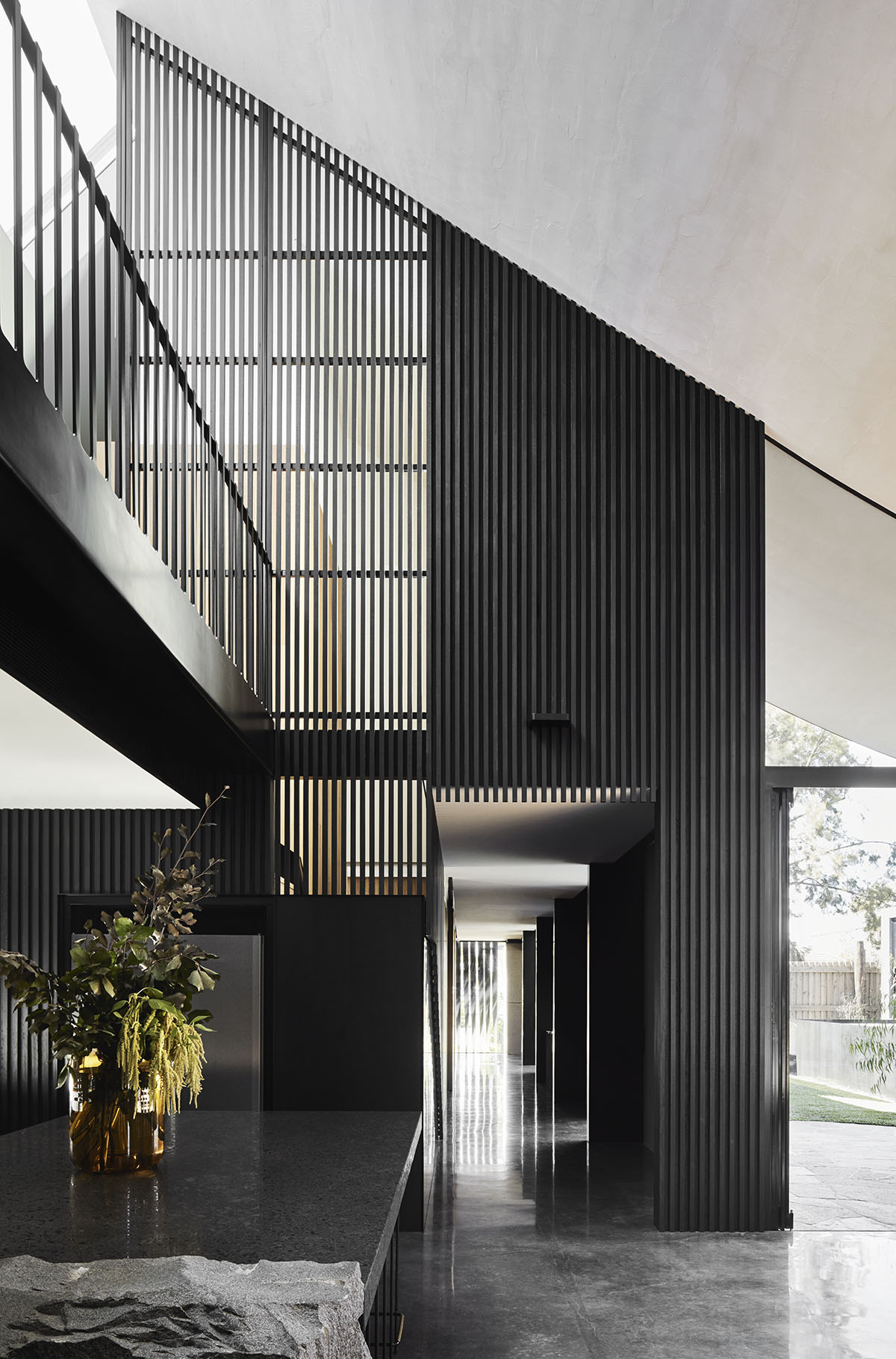 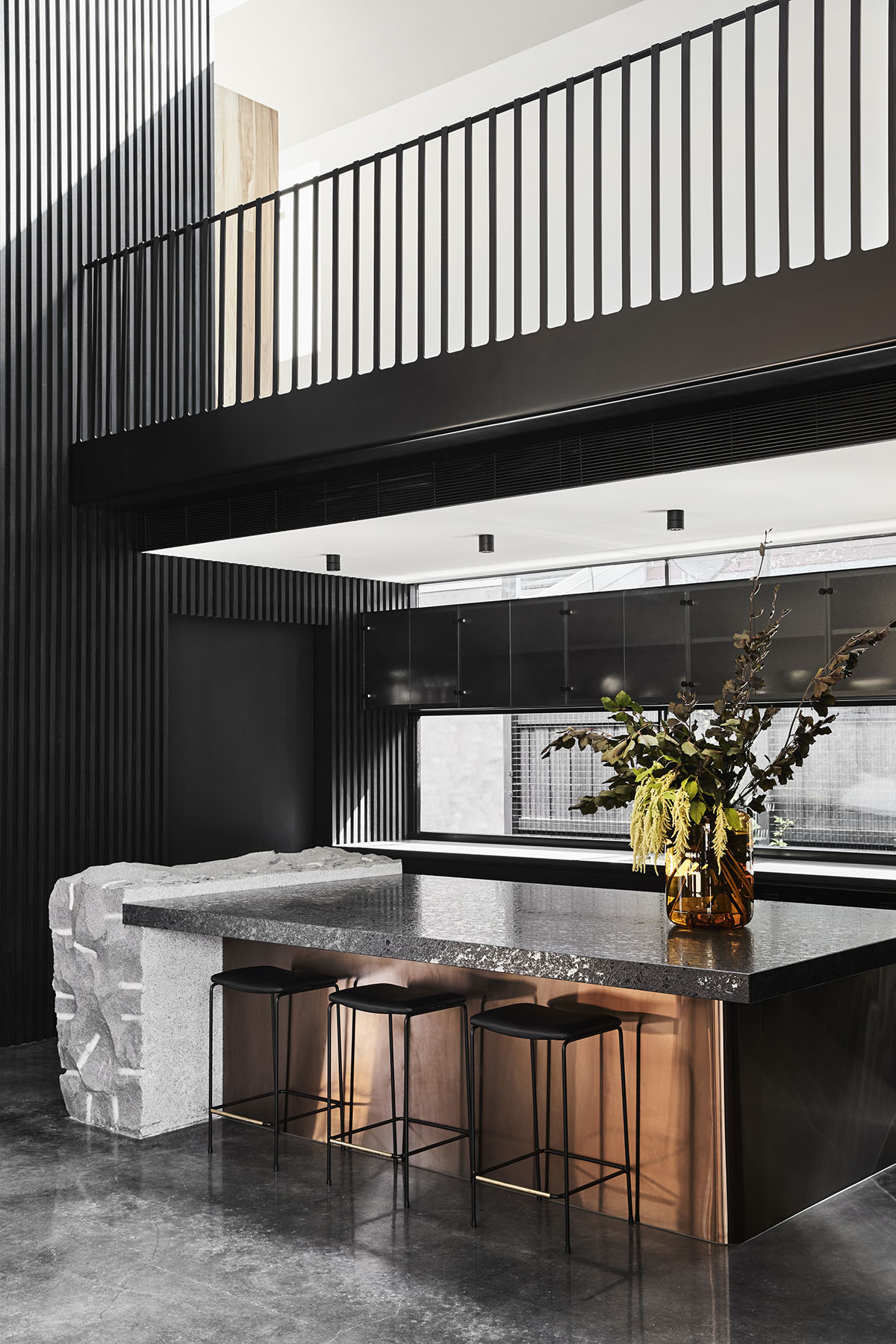 A large boulder is placed as the support for the kitchen joinery. The roughness of the large stone is balanced with fine lines and copper metallic finishes to add refinement through the house.

With an intentional emphasis on enjoyment, the design embraces a sense of glamour both internally and externally. The rich palette includes metallic highlights and teal velvets which cultivates a distinctly swanky atmosphere. Functionally, the design is equipt with all the key components for a good party, which are discretely integrated into the architectural detailing. 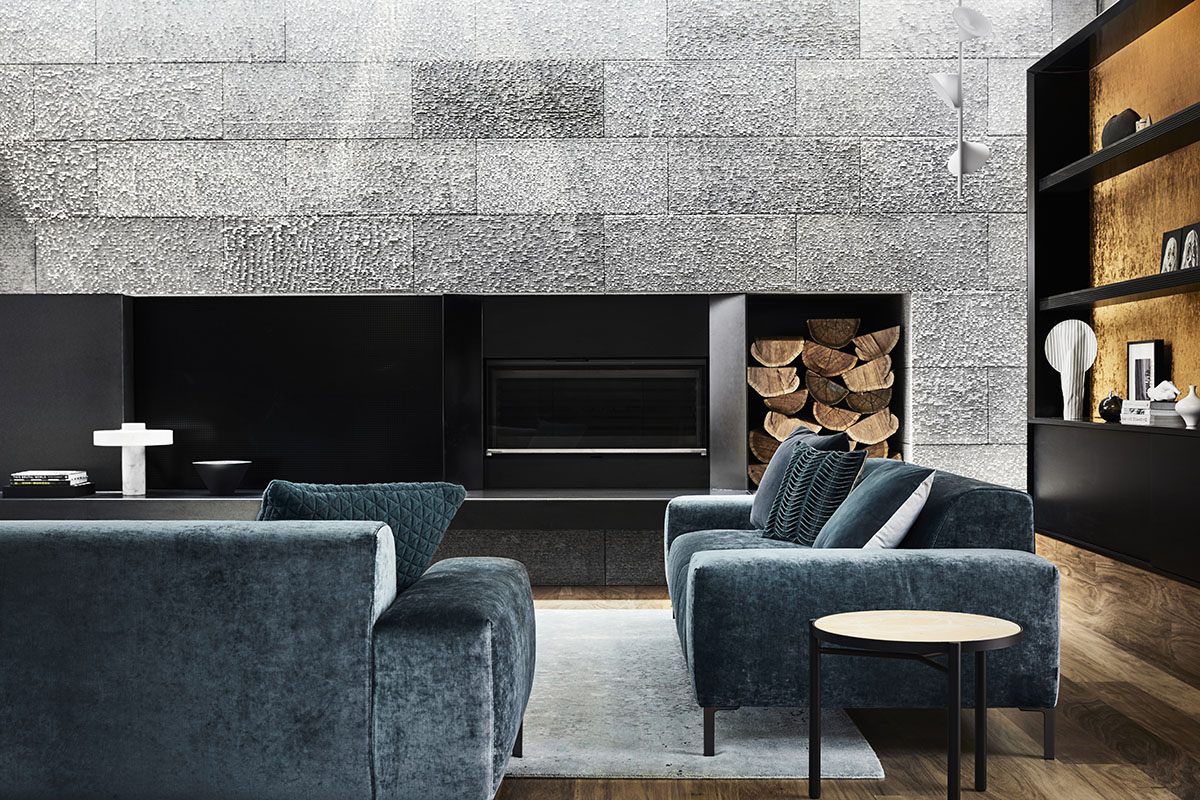 Responding to the neighbouring buildings, the massing is set to one side of the site to mitigate the imposing scale and sit respectfully into the streetscape. The roofline of the house follows the pitched form and curves down floating over airy living and dining spaces. 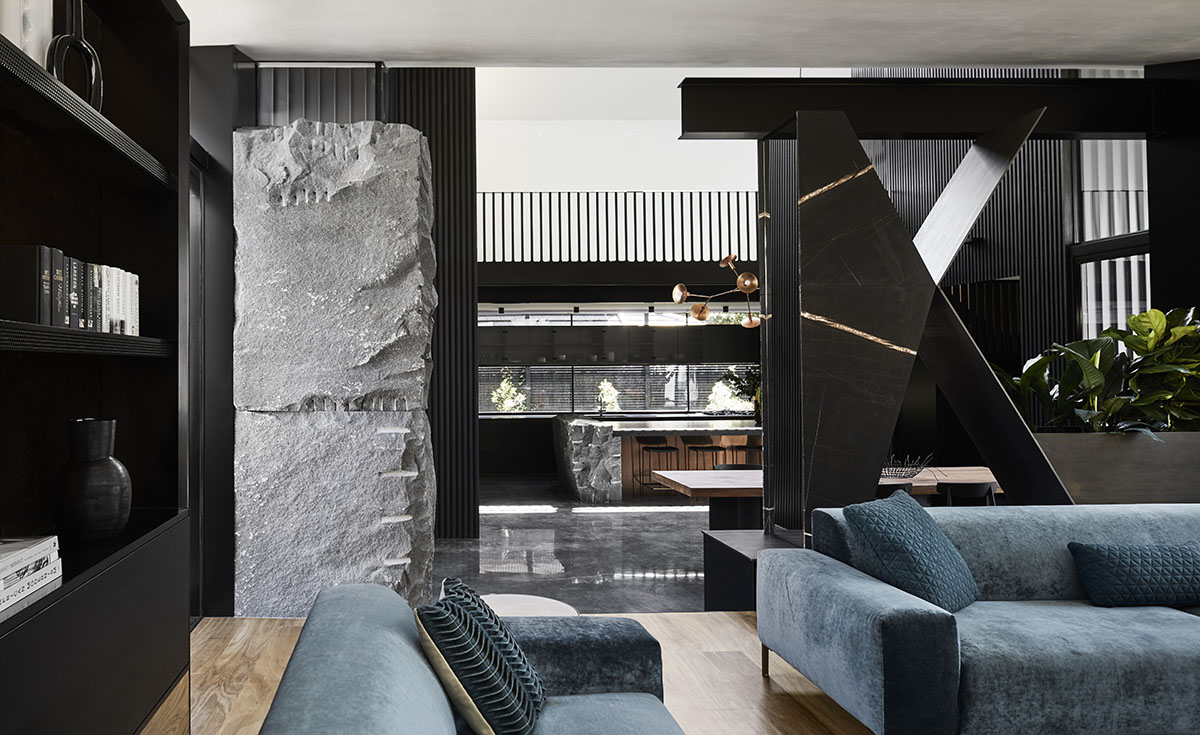 The positioning of the house provides protection from neighbouring sightlines resulting in a secluded pool surrounded by a garden setting. The hardness of the architecture is offset by the softness of the landscaping and the curving walkways. 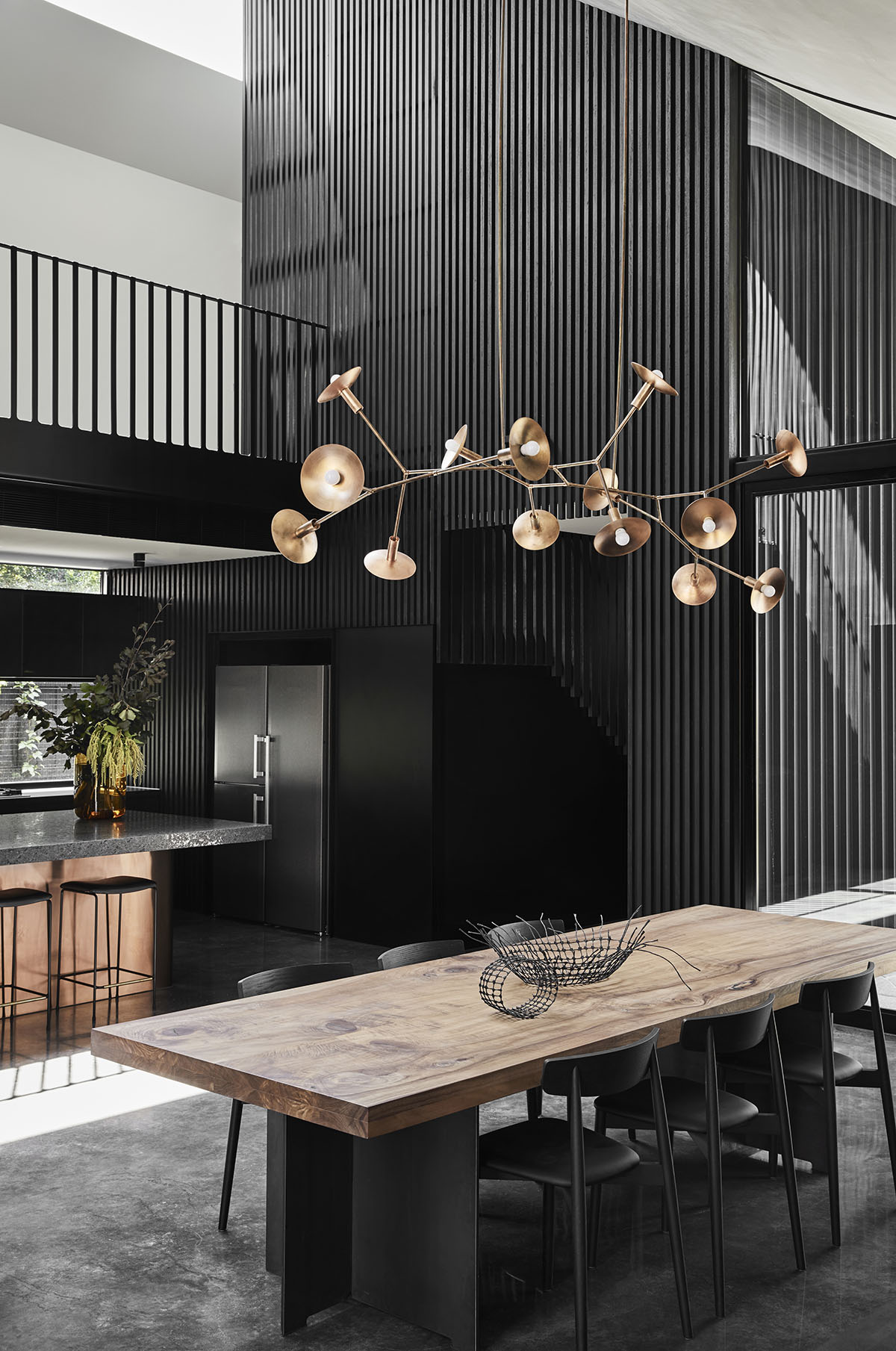 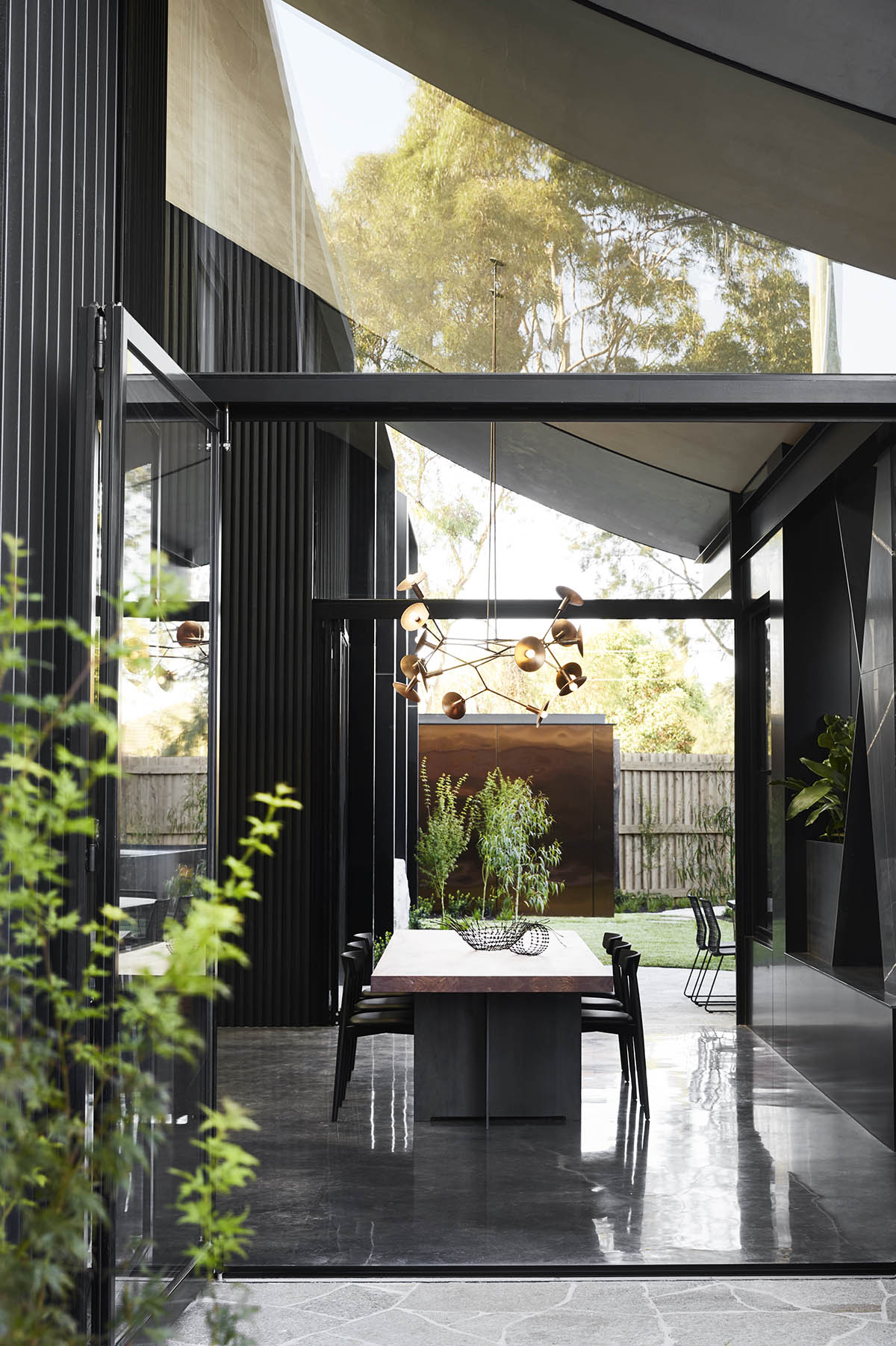 A custom-designed dining table is made from recycled timber adding to the texture of the kitchen and seats up to twelve guests. 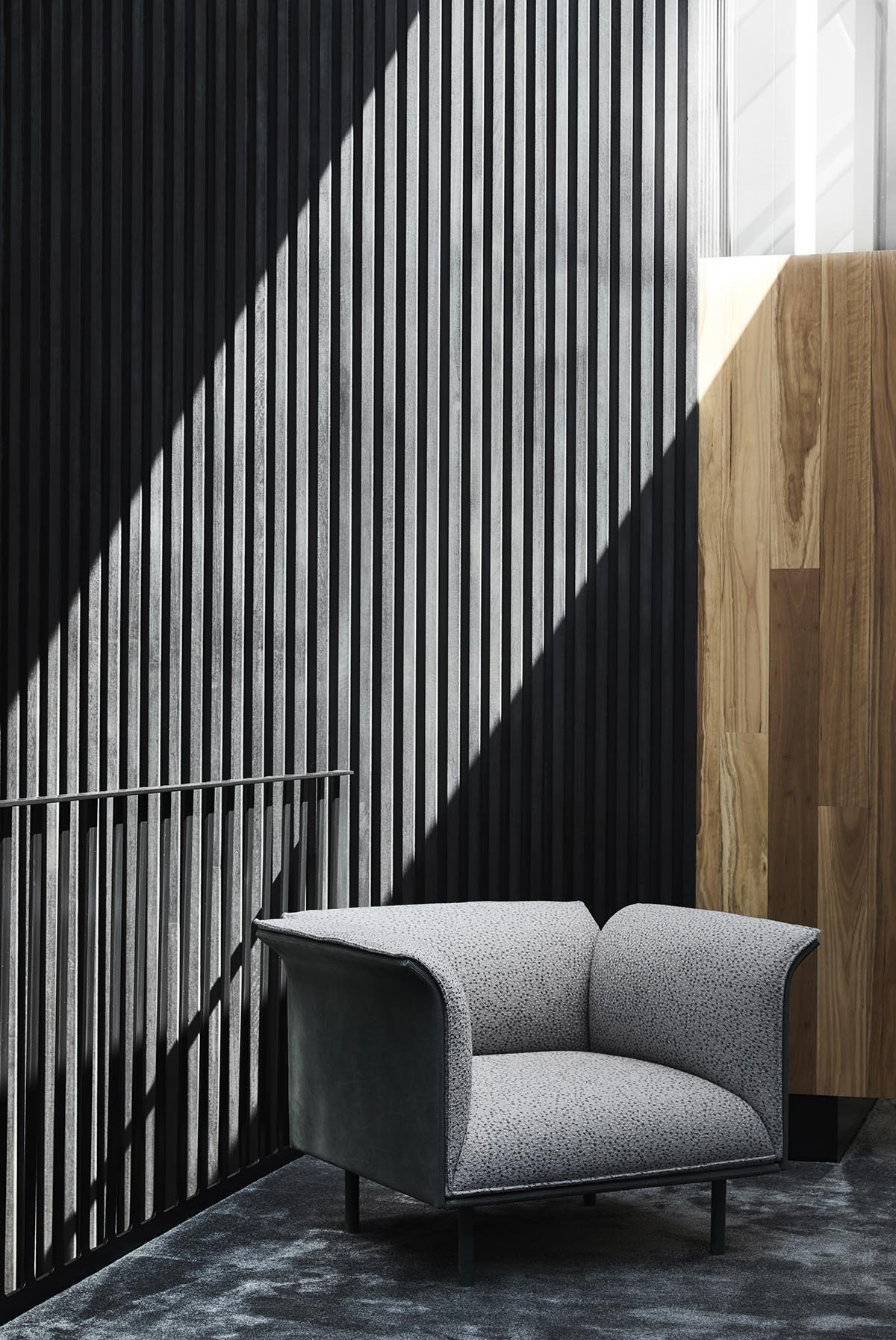 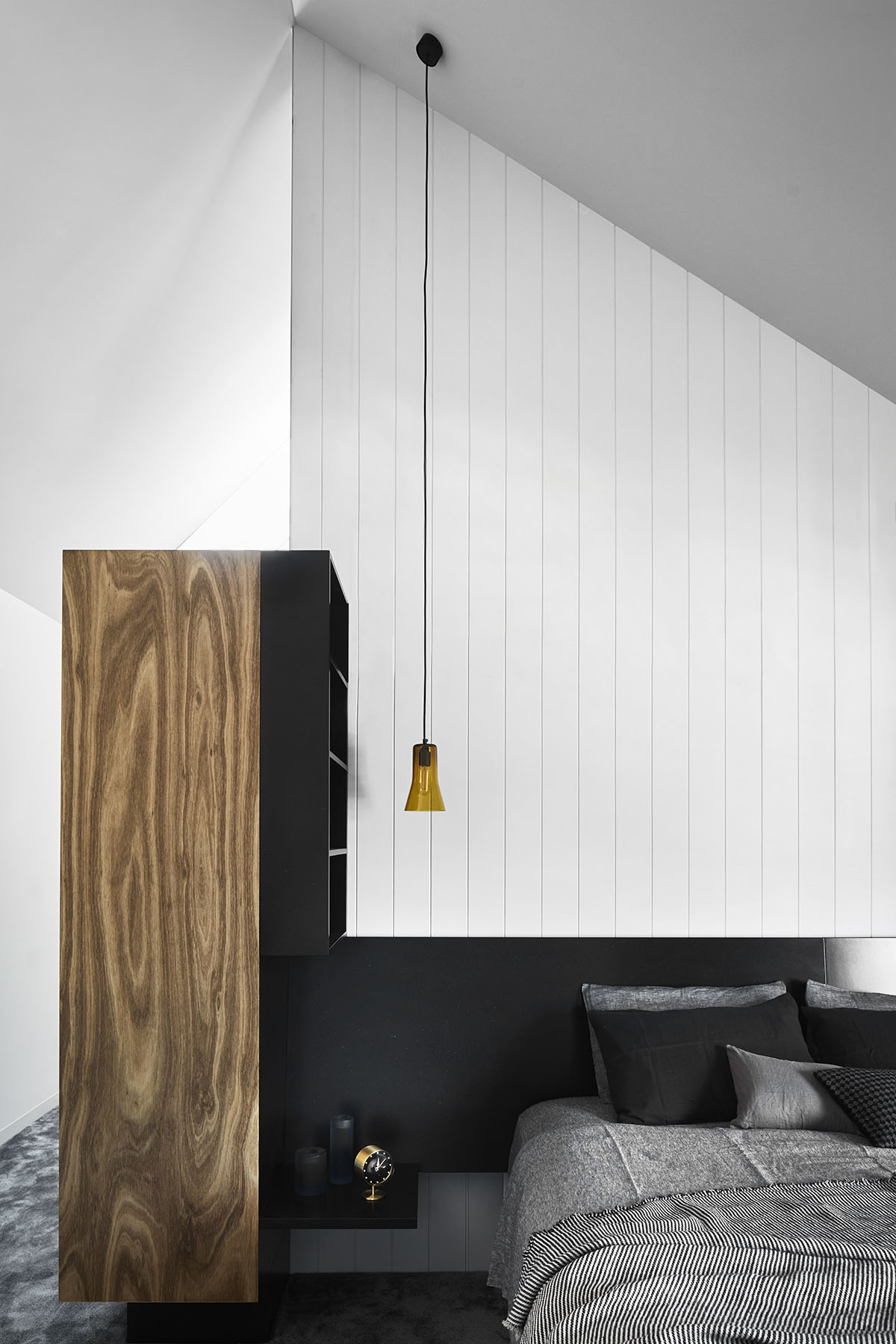 The master bedroom and ensuite use feature stone and timber-lined walls creating a strong connection through the spaces. A skylight at the top of the pitched roof creates dramatic effects as the light moves across the textured surfaces. 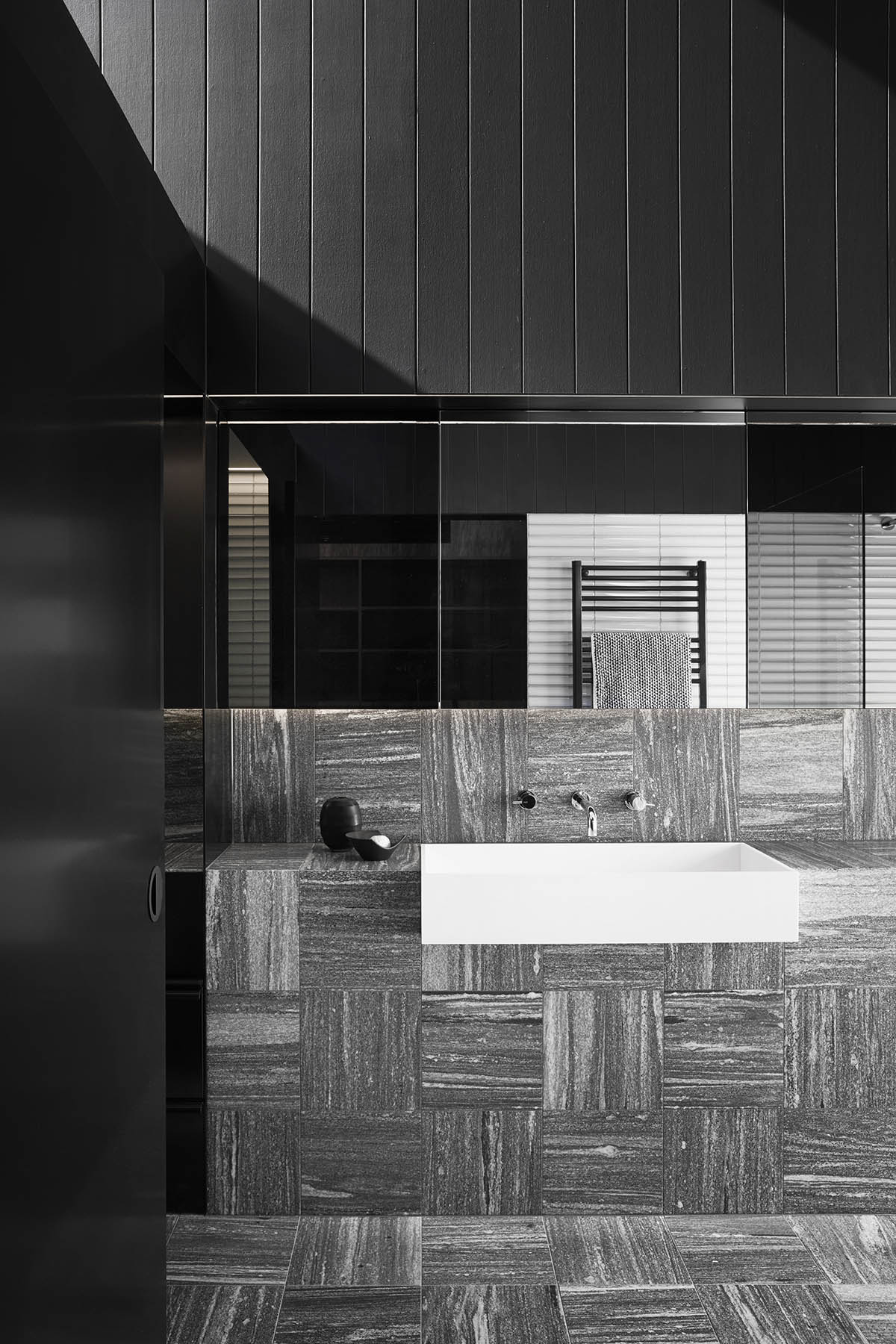 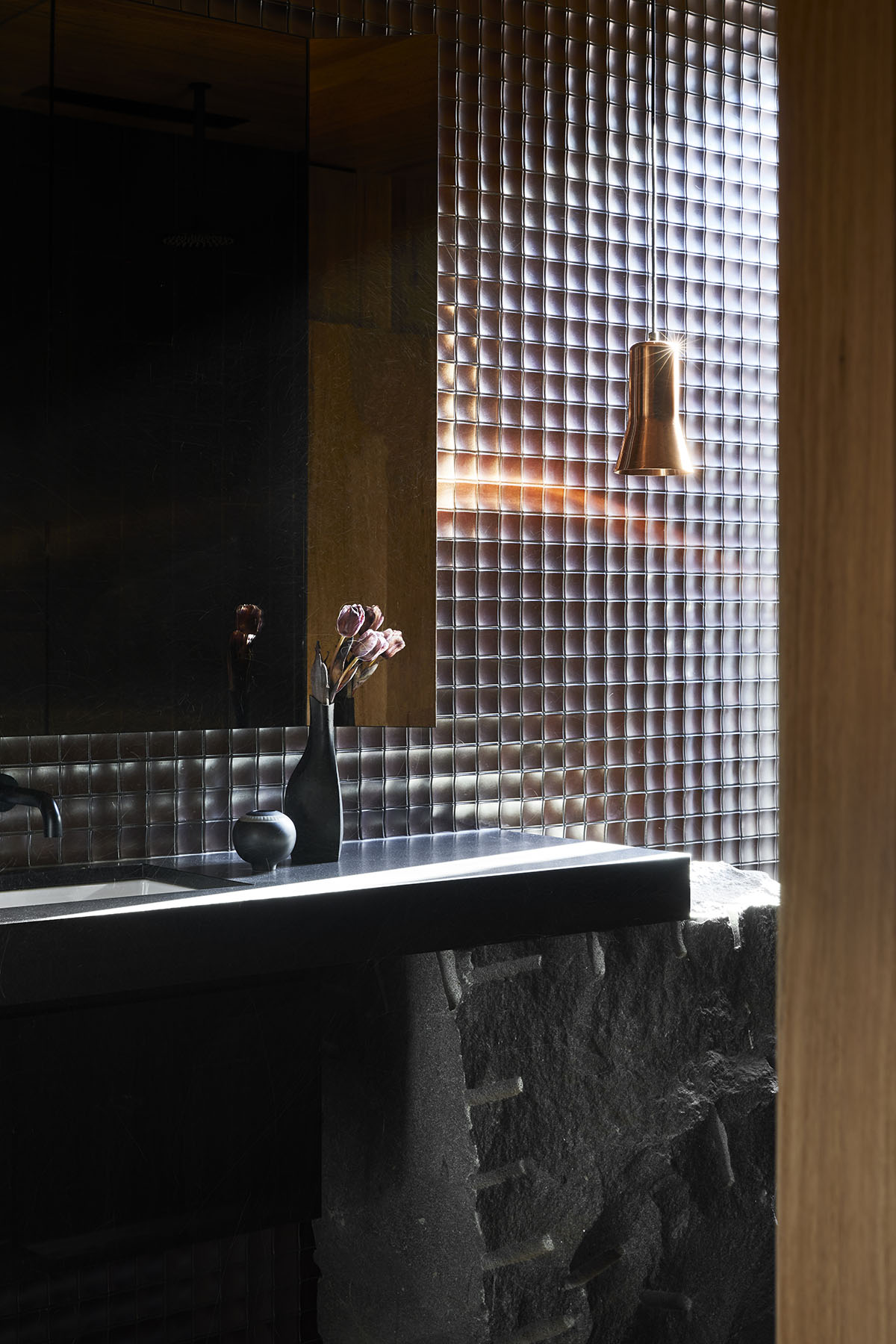 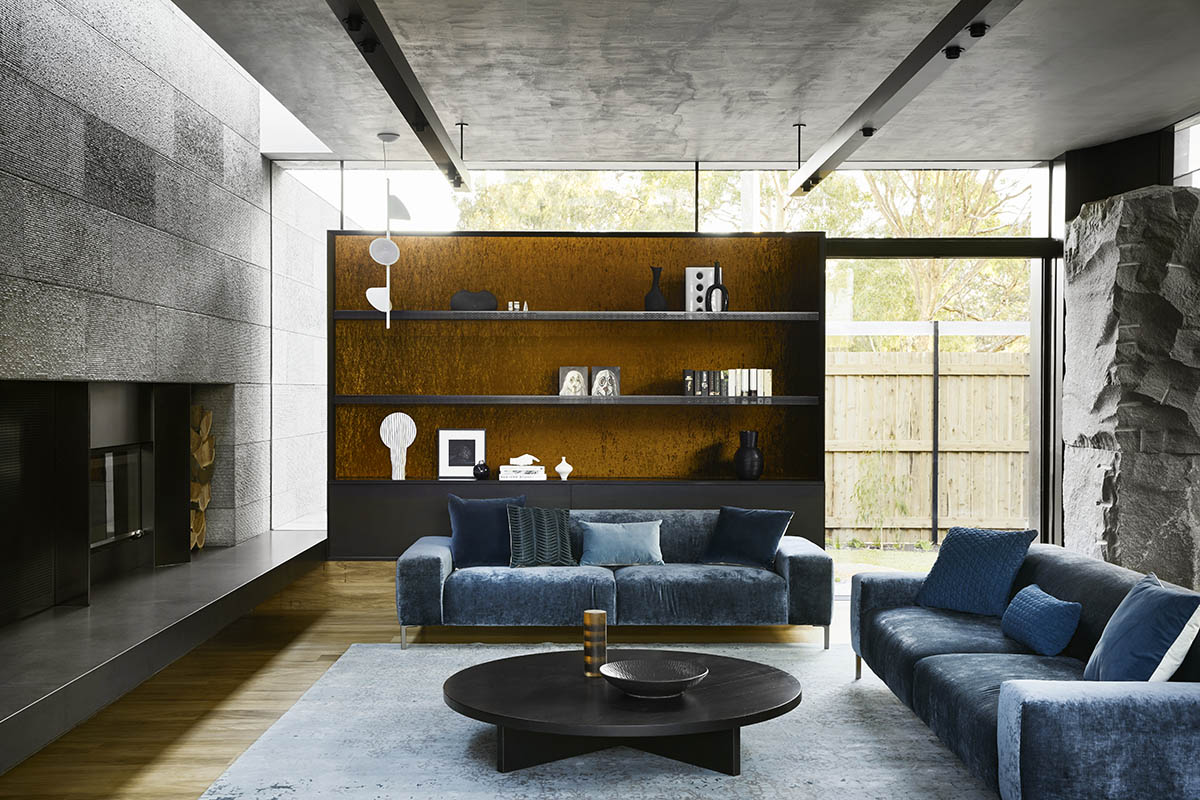 The interiors have a distinctly glamourous environment combining variable soft textures and velvets. As a symphony of contrast, the Cornerstone House is ultimately a robust design for a refined lifestyle. 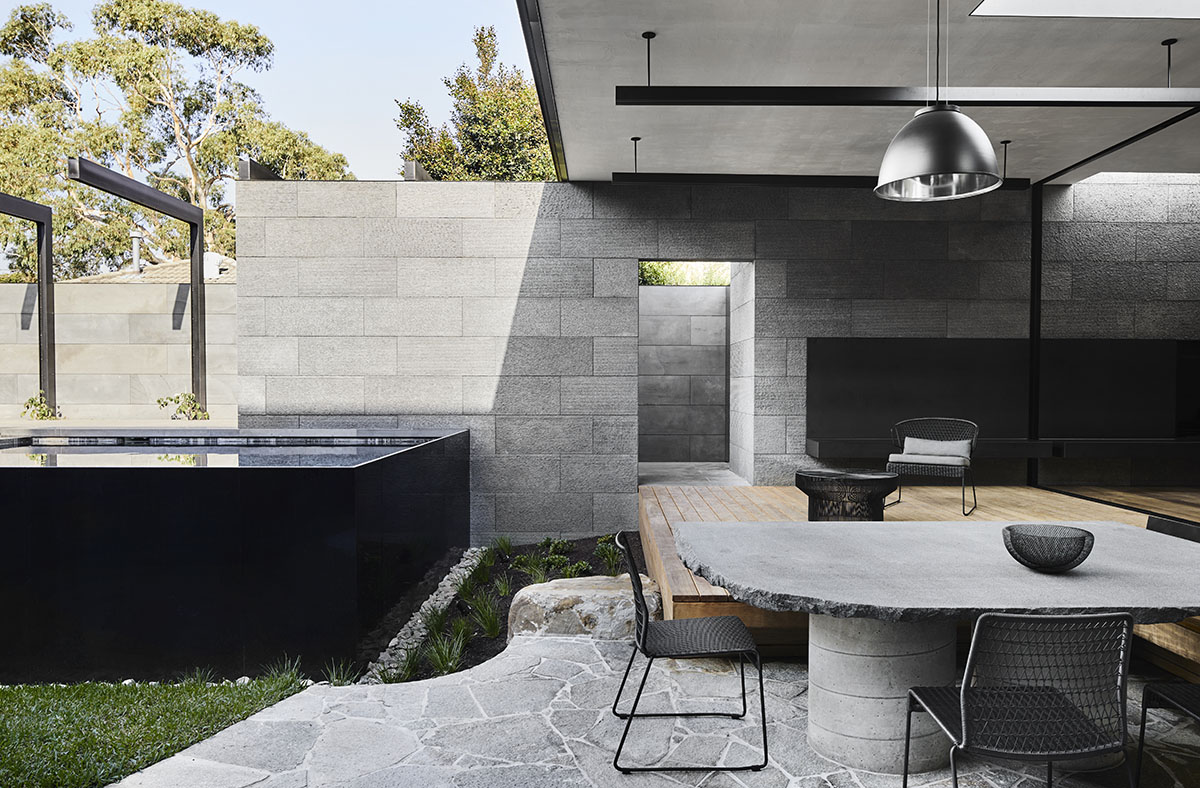 Adjacent to a pool, the outdoor entertaining area includes a custom table fashioned from a shaved slab of stone created from a boulder like the others found through the project. 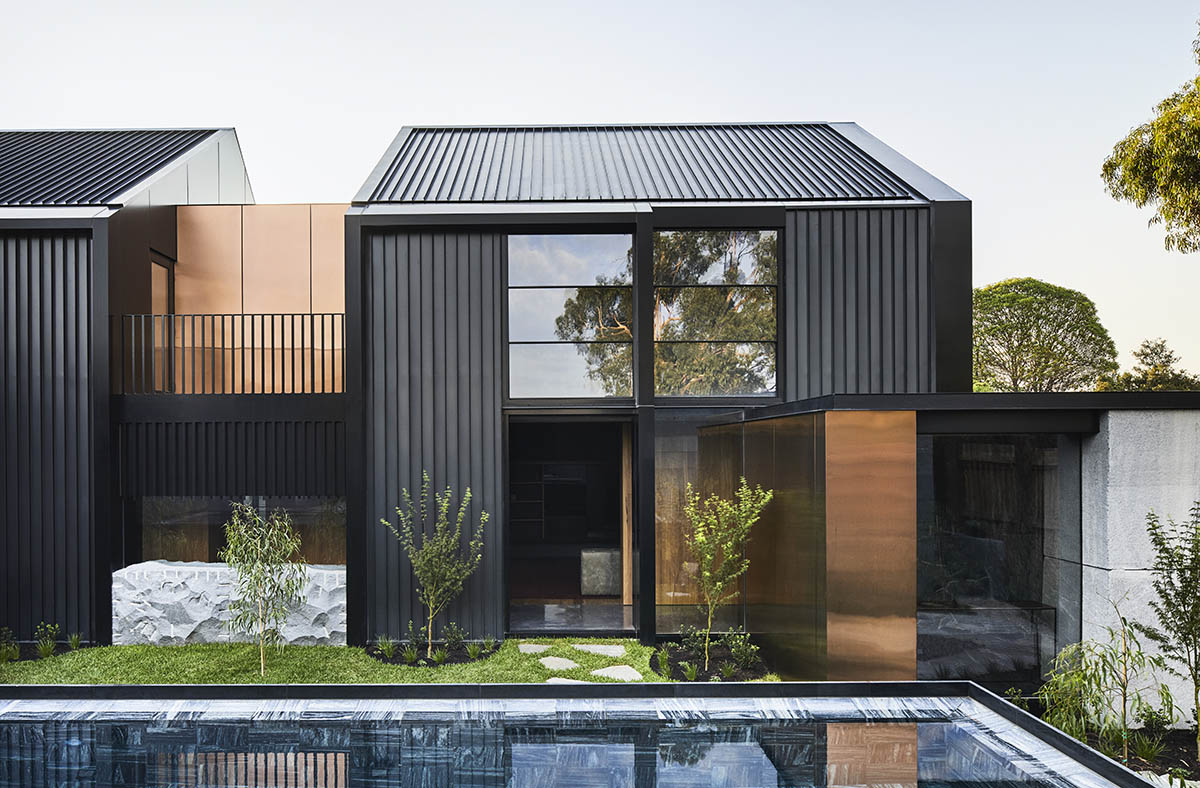 A lightwell breaks the volume in two separate section which bring light into the pool as well as creating a balcony between two of the children’s rooms. 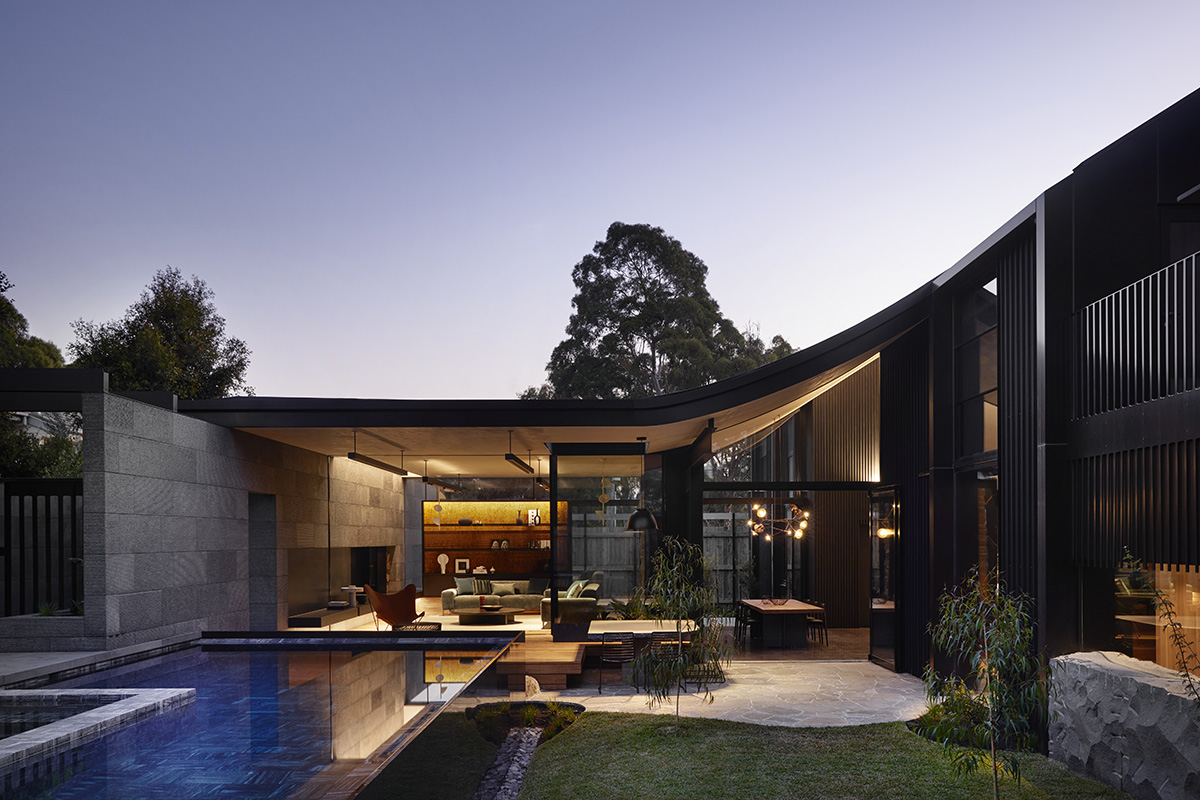 The roofline of the house follows the pitched form and curves down floating over airy living and dining spaces. 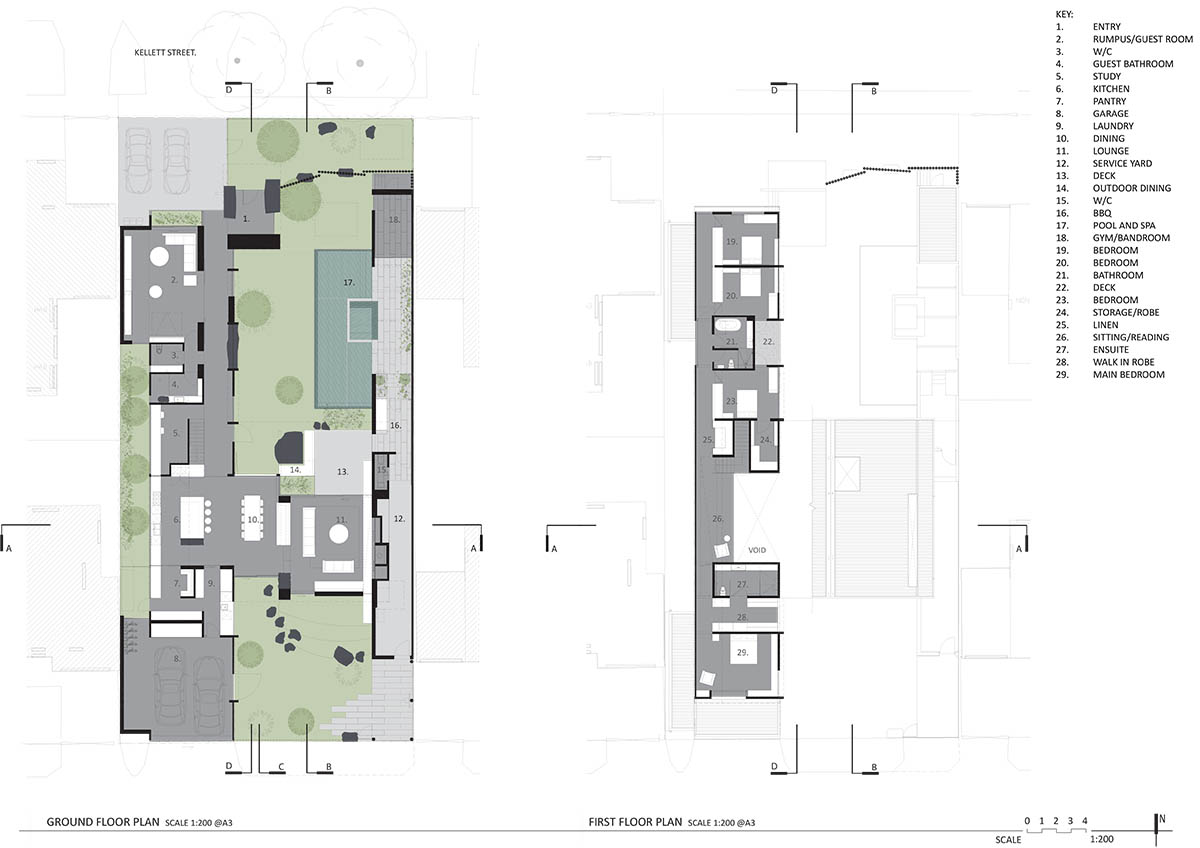