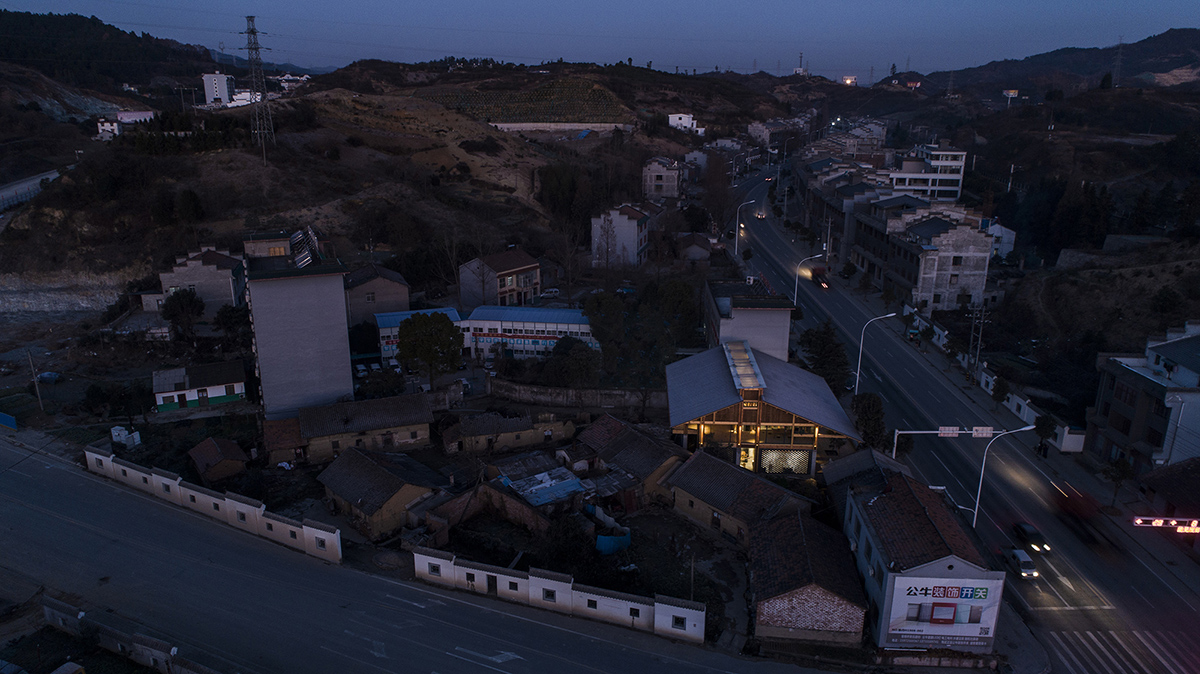 LUO studio has completed the Party and Public Service Center of Yuanheguan Village in Hubei Province, China, the project is described as "a construction featuring successive growth".

Wudang Mountain Tourism Economic Zone in Shiyan City has been actively promoting B&B business and improving the surrounding environment of the scenic area. Yuanheguan Village is close to the entrance of Wudang Mountain Scenic Area, and therefore was selected as a prioritized place for a pilot program.

According to the plan, the plot where the original village committee office was situated and its surroundings will be transformed into a B&B reception demonstration area, so it was very urgent to relocate and construct a new village committee office. To guarantee services for the villagers, it was essential to figure out how to build it in a short time. 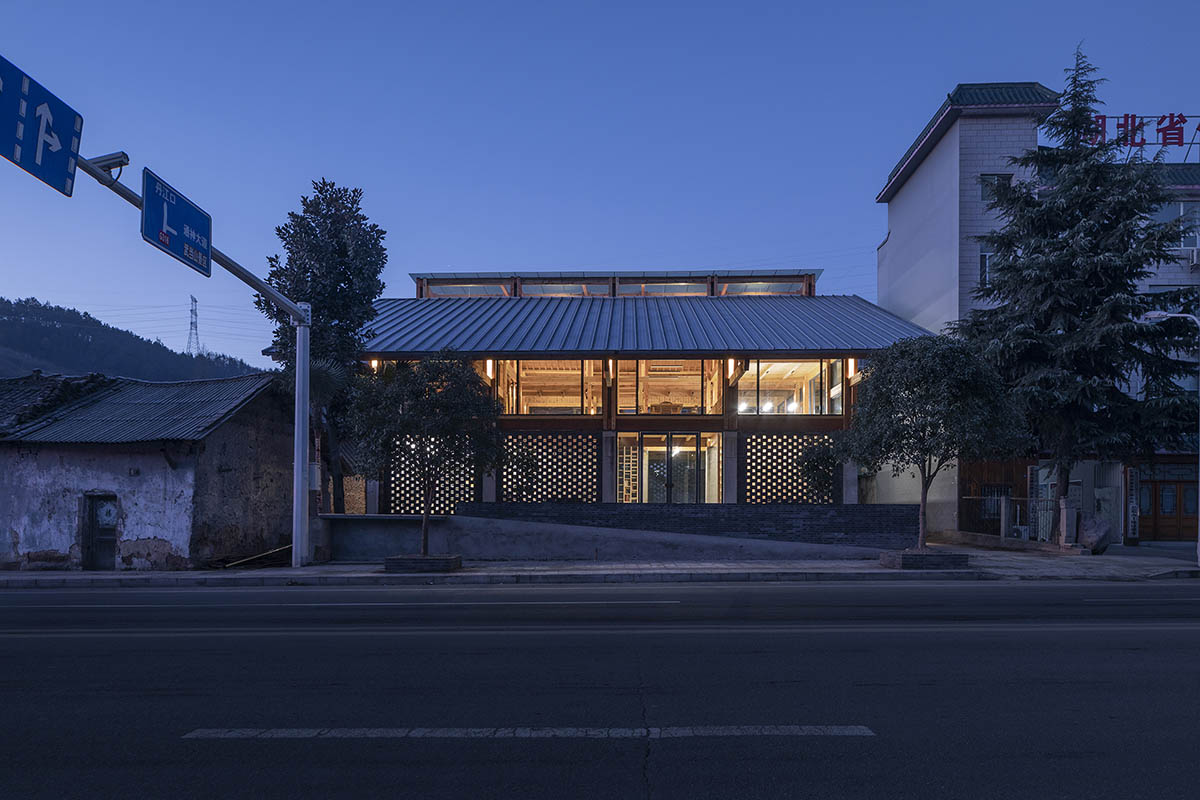 Based on comprehensive investigation and consideration of the village’s conditions, LUO studio recommended to reuse an idle residential plot that is adjacent to the main road as the new site of the village committee office. This plot was once requisitioned for a development project, but for some reason the project has been put on hold for five to six years, leaving built foundation and several structural columns on the site.

Therefore, continuing construction work on this basis could save a lot of time. Another reason was that the abandoned plot is close to the intersection of two important streets. The subdistrict office and the village committee agreed to reuse and transform the plot, hoping to reshape the built landscape along the streets and activate the dilapidated western area of the village. Situation of the preserved foundation and first-level columns: the construction load of the foundation was calculated based on the originally planned construction for a house featuring three to four stories and a concrete frame structure (a typical local building type along the streets). A layer of concrete was precast on the ground beams, so the ground level was made about one meter higher than the sidewalk (a common practice for foundation treatment in the local area). 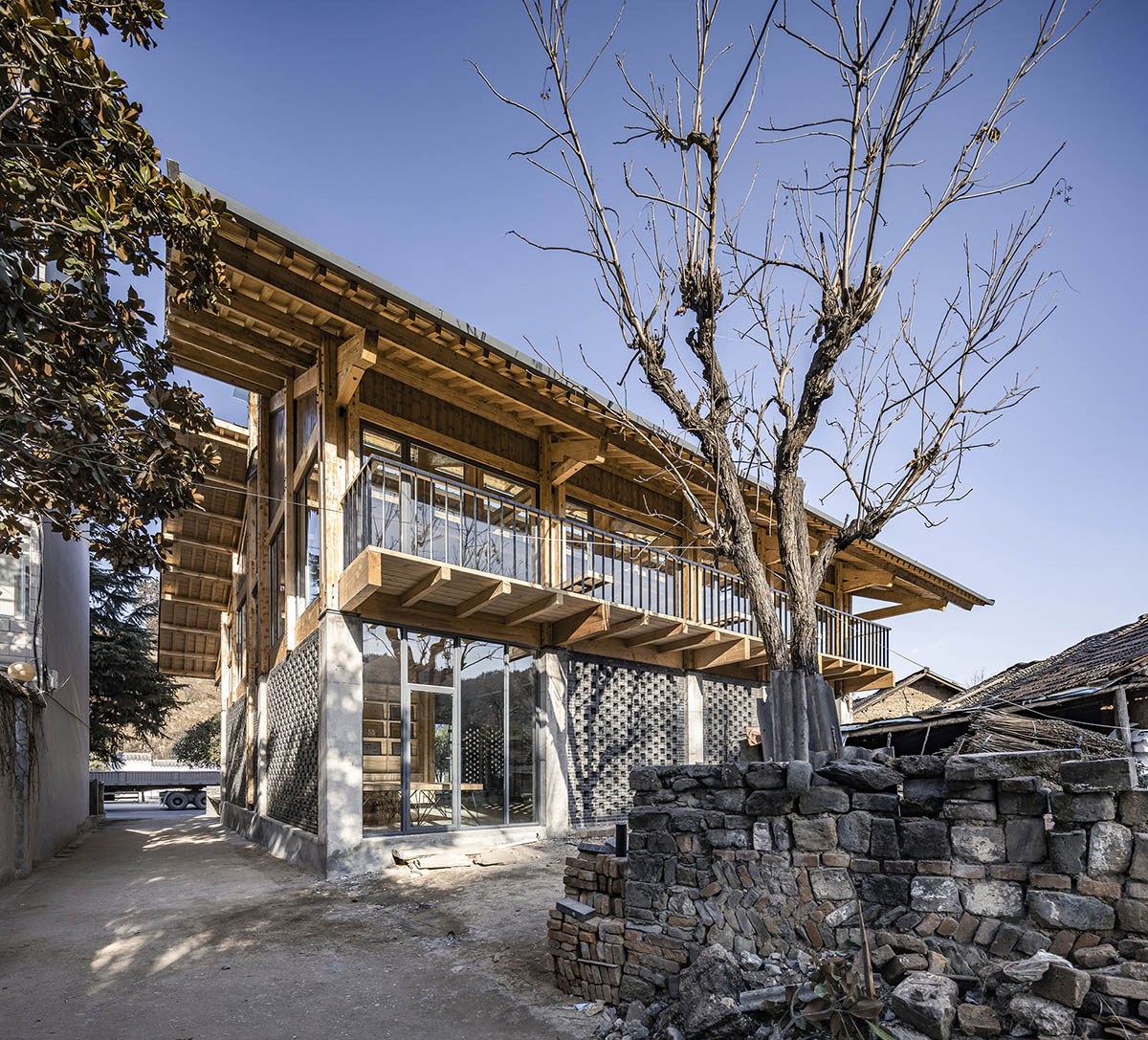 The columns were 3.2 meters high measured from the ground level. Post-reinforced steel bars were reserved at the top of the columns, which allows for further welding of steel components. After on-site investigation, LUO studio drew a conclusion that although those concrete foundation columns had been exposed for many years, the performance of the structure could still meet the requirements for subsequent construction.

From a prudent point of view, the design team set several principles for the subsequent construction: avoiding damage or alteration to the original structure, minimizing extra load increased by the upper new construction, and effectively combining the forces of the new extension and the old construction. 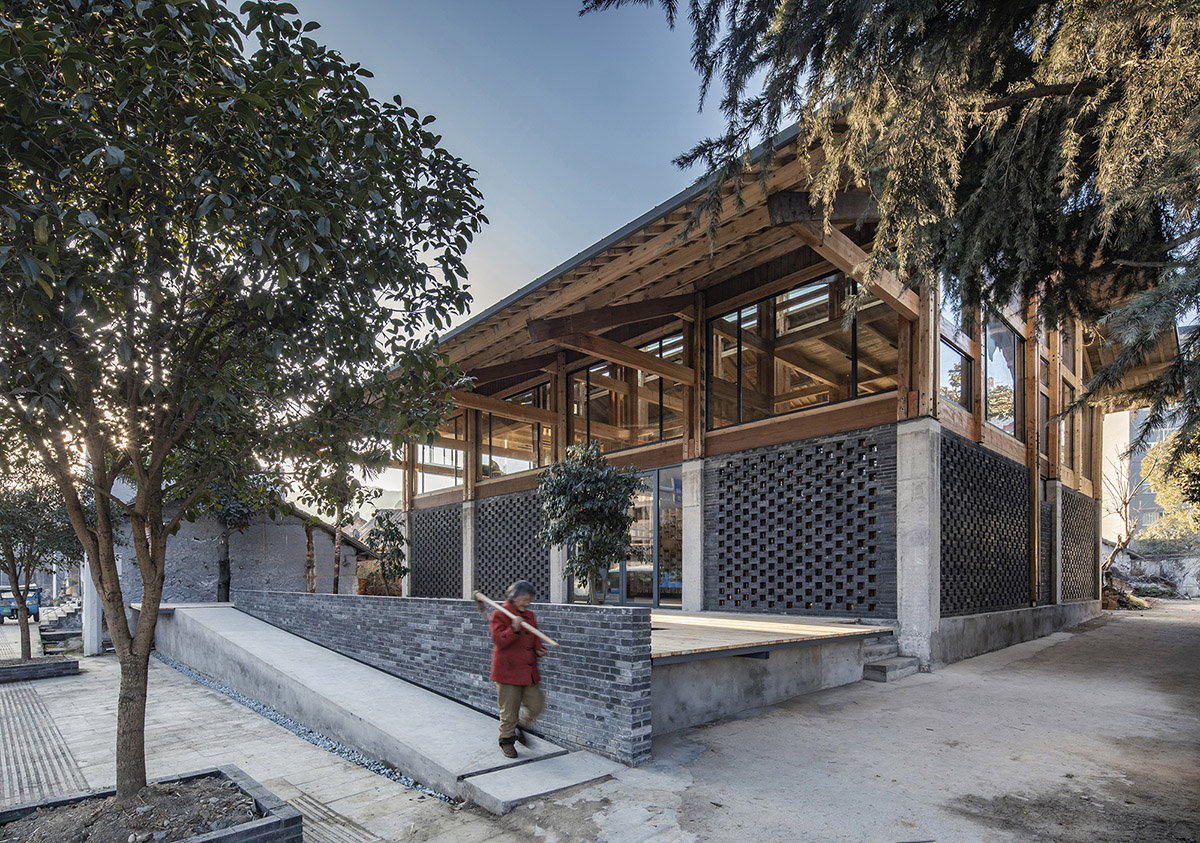 After comprehensive researches and analysis, LUO studio decided to carry out subsequent construction with wooden structures, because in this way the load on the upper part would be smaller than using other alternative structures and materials (including concrete, brick, earthen wall and steel).

Besides, wooden structures can be prefabricated and assembled, which is helpful to shorten construction time. Furthermore, wooden construction fits into local context of Wudang Mountain area. 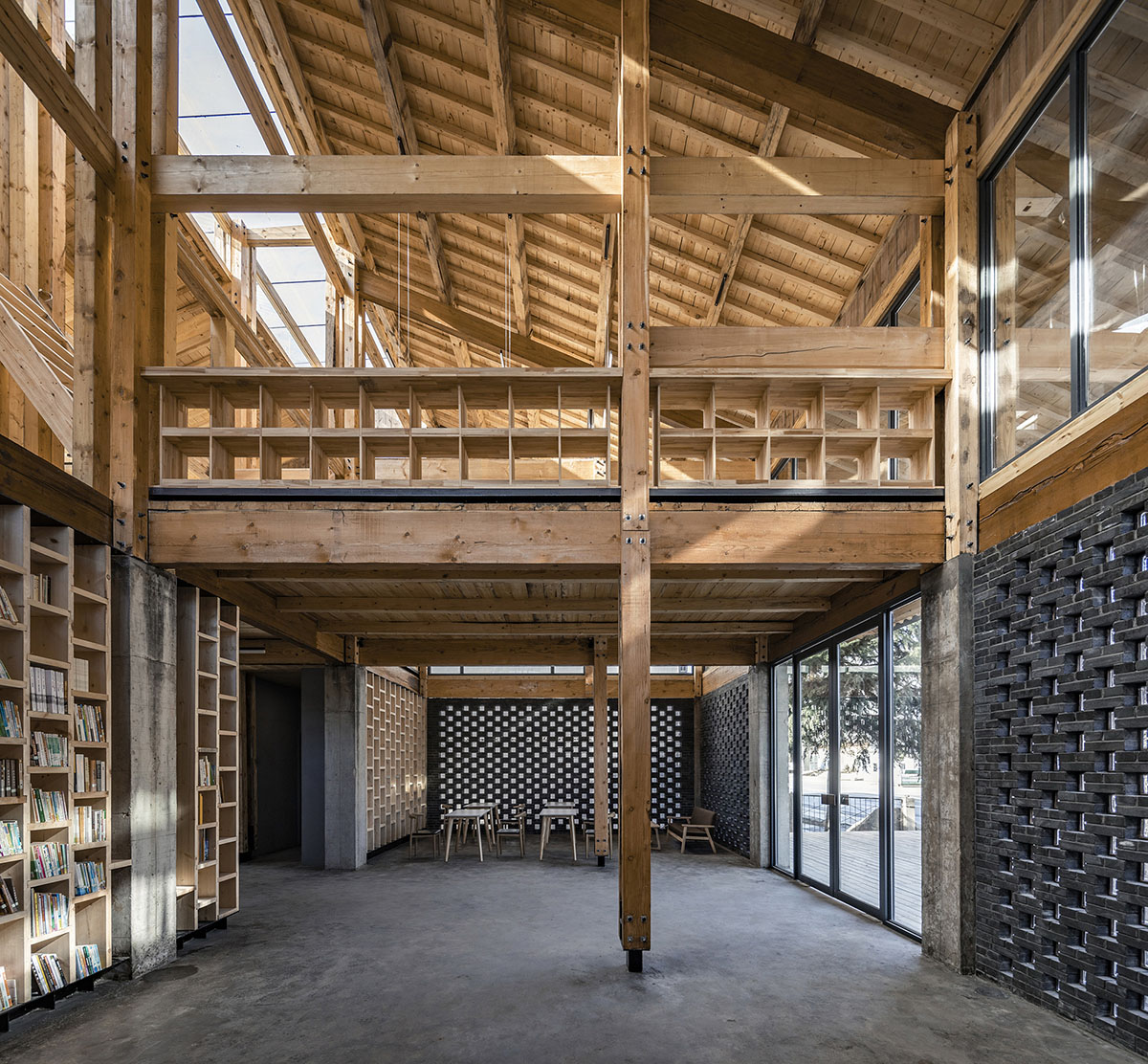 Subsequent construction was based on the following three phases

Adding wooden columns to the first level and organizing the grid:

The concrete columns already existed on the site constitute a grid in a disorderly arrangement. There were three columns lay in the south-north orientation, and the in-between spacings were 5.75m, 2m, and 6.5m. The column spacings along the east-west axis on the north side were 4.15m and 4.25m, while the south side had three different spacings: 2.6m, 3.5m, and 3.6m, which caused an irregularity in the center of the column grids. The south-north spacing of columns in the central area was 2m. The properties of the added wooden structure and the concrete columns are different. 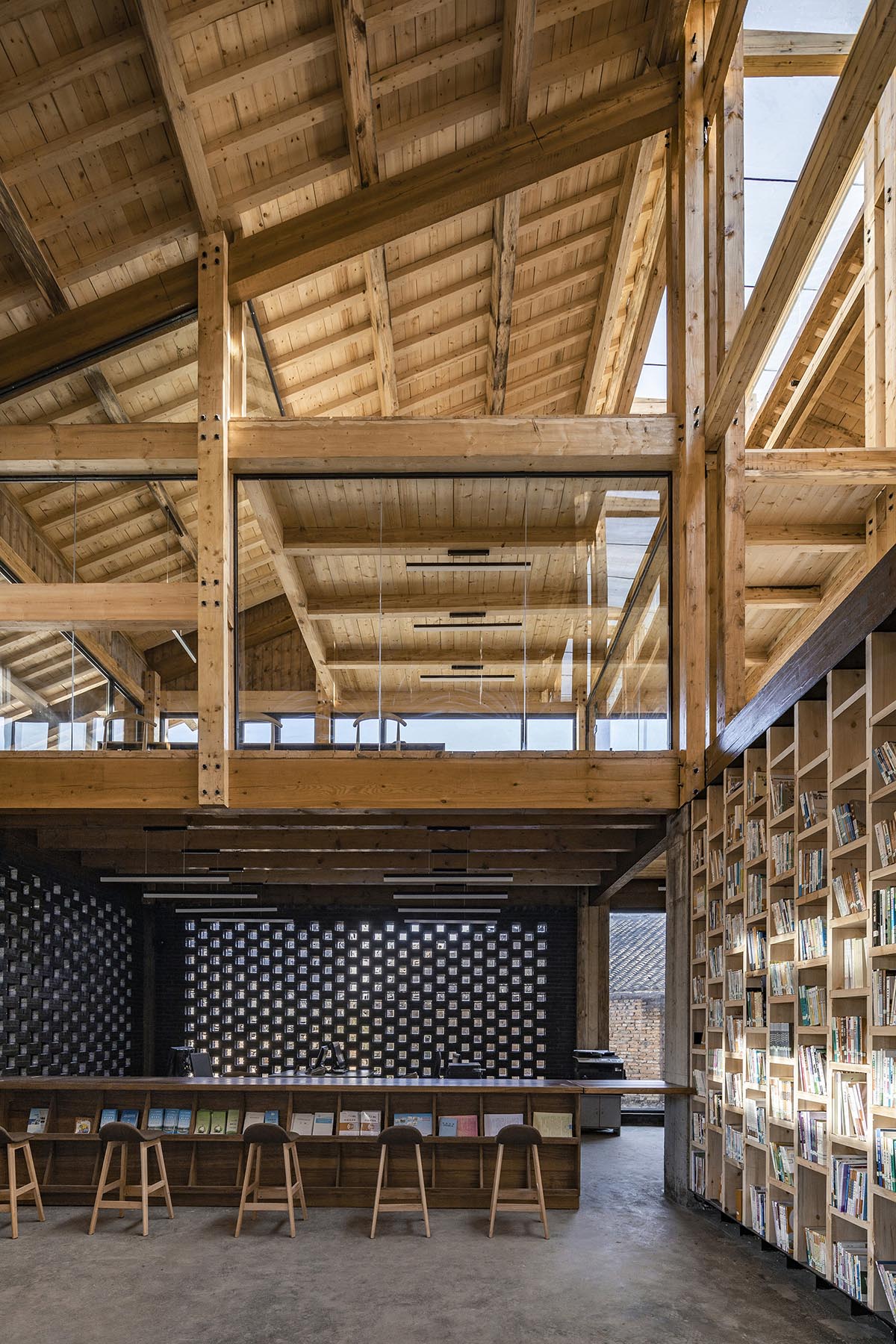 Compared to the wooden structure, the original concrete column grid is incomplete. For this reason, necessary columns needed to be placed to the two-meter wide column lay in the central area, so as to make up for the lack of span of wooden beam members. In this way, it also helped to solve the irregularity of the column grid in between north and south sides.

Then, by connecting the new column grid with the wooden beams, LUO studio realized the integration of the concrete column foundation and the wooden structure for the first floor. 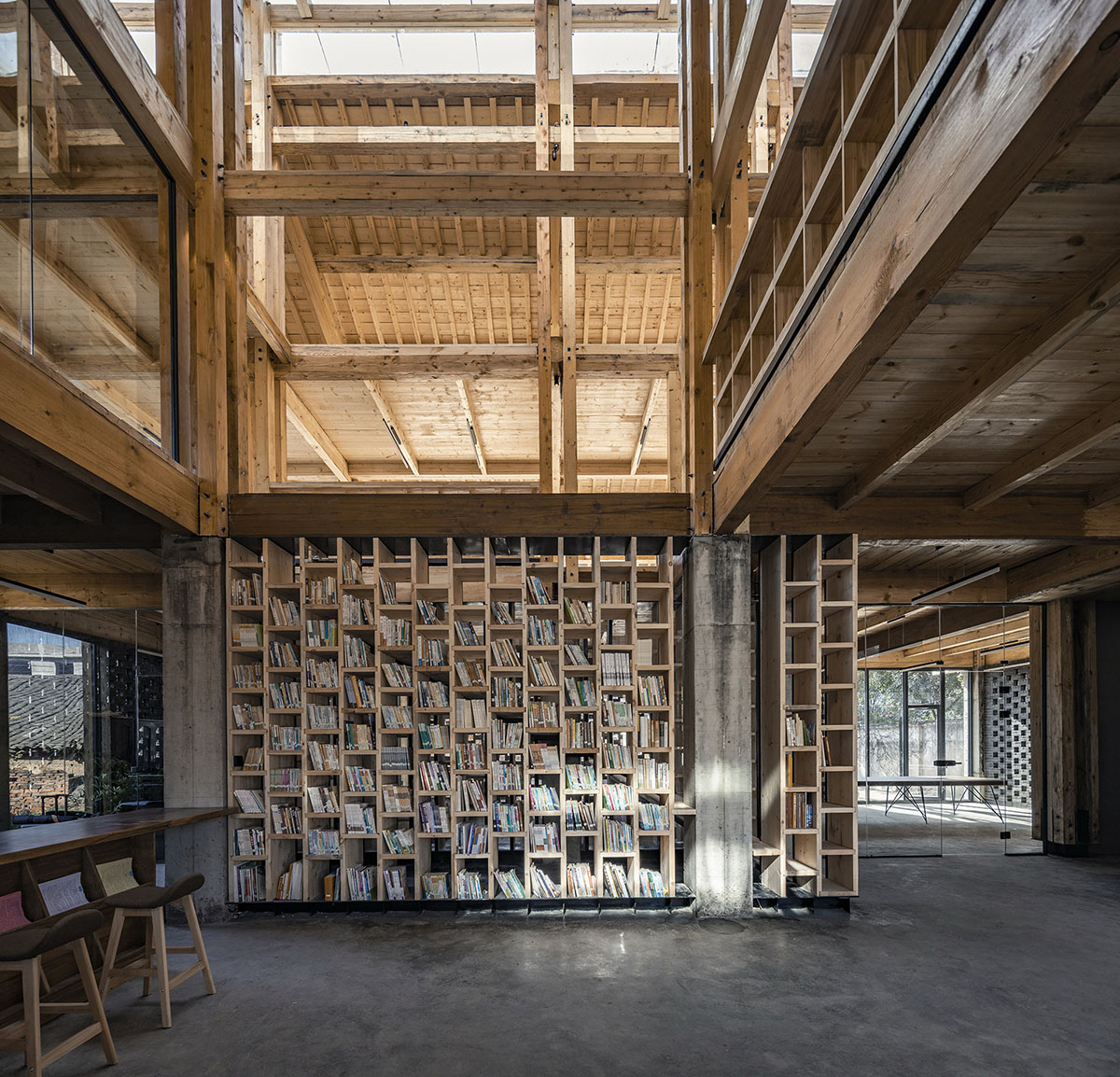 The structure of beams and columns on the first floor grows upwards. The cross-section area of the concrete columns is 450mm*450mm, which was too large for wooden materials. Therefore, four 150mm*150mm wooden pillars were bundled together to form a "clustered column", which helped the intersection and connection between beams and columns. The central area with very dense columns (spacing: 2m) and beams, was extended upwards to form the roof ridge.

The ridge area was turned into a linear skylight, which ensures enough daylighting for the interior space that has a depth of 15m. The roof slopes to the north and south sides. The entrance is on the north side and faces the street, above which a long overhanging element forms a large covered area and responds to the characteristics of official architectures unique to Wudang Mountain area. A terrace is set on the south side, which opens the view to the mountains far away, Taoist temple and the main area of the village. 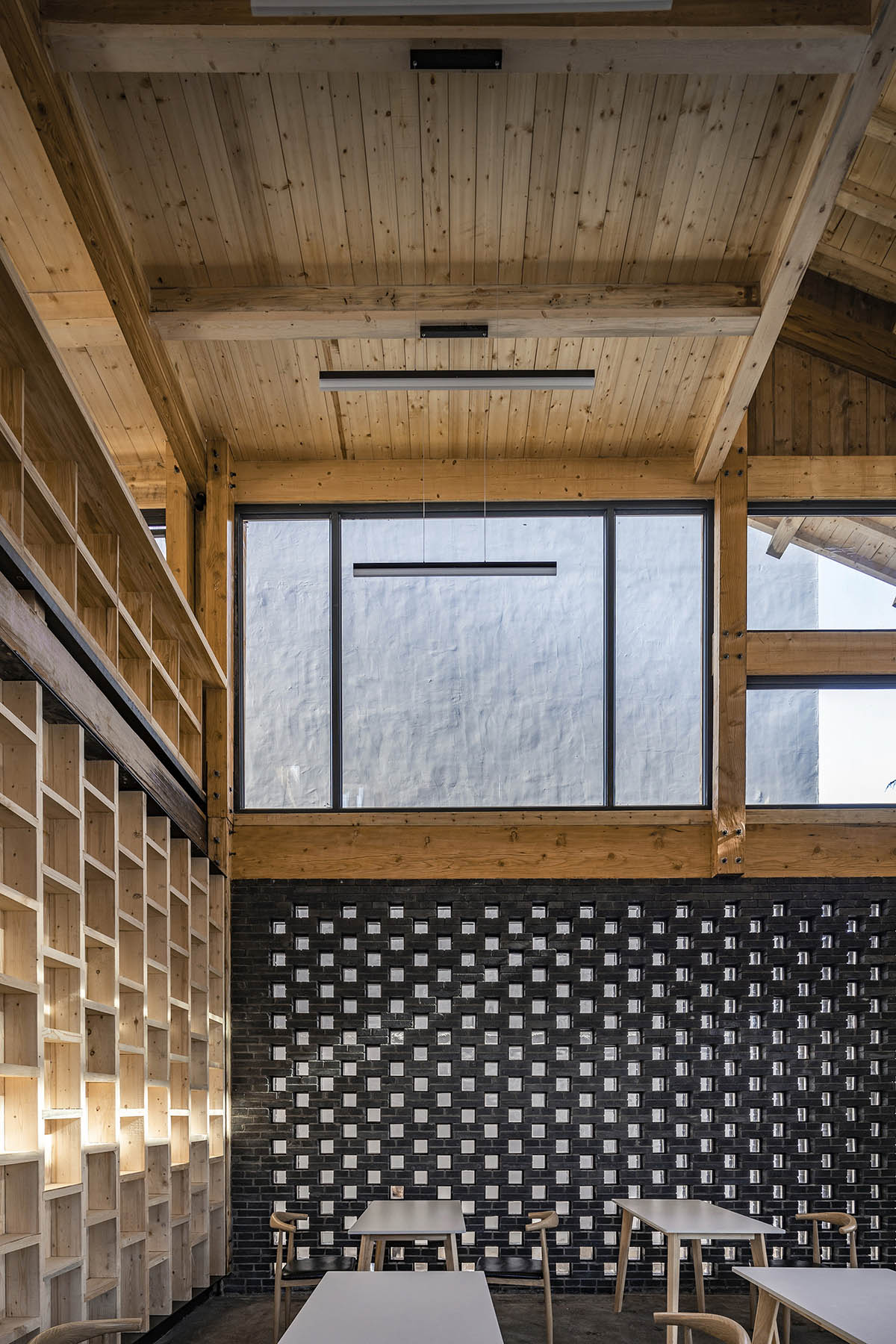 Filling in horizontal and vertical partitions and enclosures:

After the main structure was completed, the next steps were to enclose exteriors, separate interior spaces and add floor slabs. The site was surrounded by adjacent buildings. Therefore, in order to prevent interference, the first floor is mainly enclosed by masonry walls. Those walls are characterized by even mixing of grey bricks and glass bricks, which ensures a certain amount of daylight in the interior. On the second floor, large areas of French glass windows provide a good view to the outside. The central area (with a column spacing of 2m) marks out the north and south zones in the interior space.

The north zone is an open public area, while the south zone serves for working and meetings. The central area between the north and south zones are relatively narrow, which accommodates comfortable service space for vertical traffic and a washroom. In order to bring in ample natural light in the service hall, an opening was carved out on the floor slab of 2F, which forms a hollow space and allows daylight to filter down. Due to height limits, the mezzanine was mainly set up in the central area, used for storing files and items. Secondly, prefabricated construction. Factory-made materials were the first choices. Materials required in the subsequent construction process were prepared in advance, so the on-site work was mainly just installation and assembly. Thirdly, avoiding non-standardized parts as much as possible. Even though the original concrete column grid was very irregular, various methods were adopted to reorganize the grid to standardize the structural members, doors and windows and other components for subsequent construction process. The specifications and arrangement of parts were carried out based on sizes of industrial profiles in order to reduce material consumption caused by cutting and segmentation. 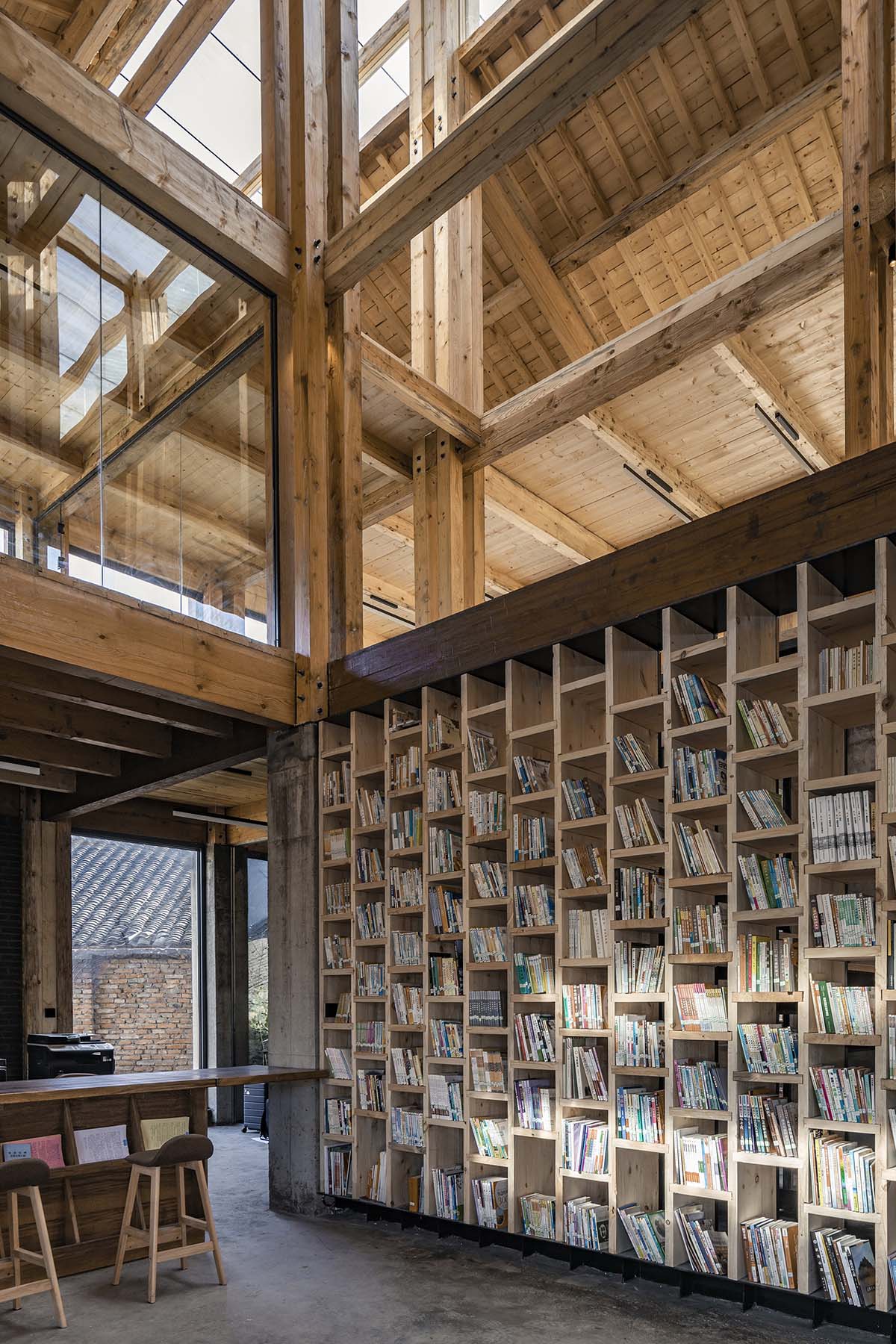 Through those effective strategies, the design, construction and interior furnishings were finished in two months, despite of the local rainy climate. Due to the limited schedule, there was still some space for the improvement. For example, some structures could be more precise. The specifications were unified and relatively rough, for the purpose of fast construction. 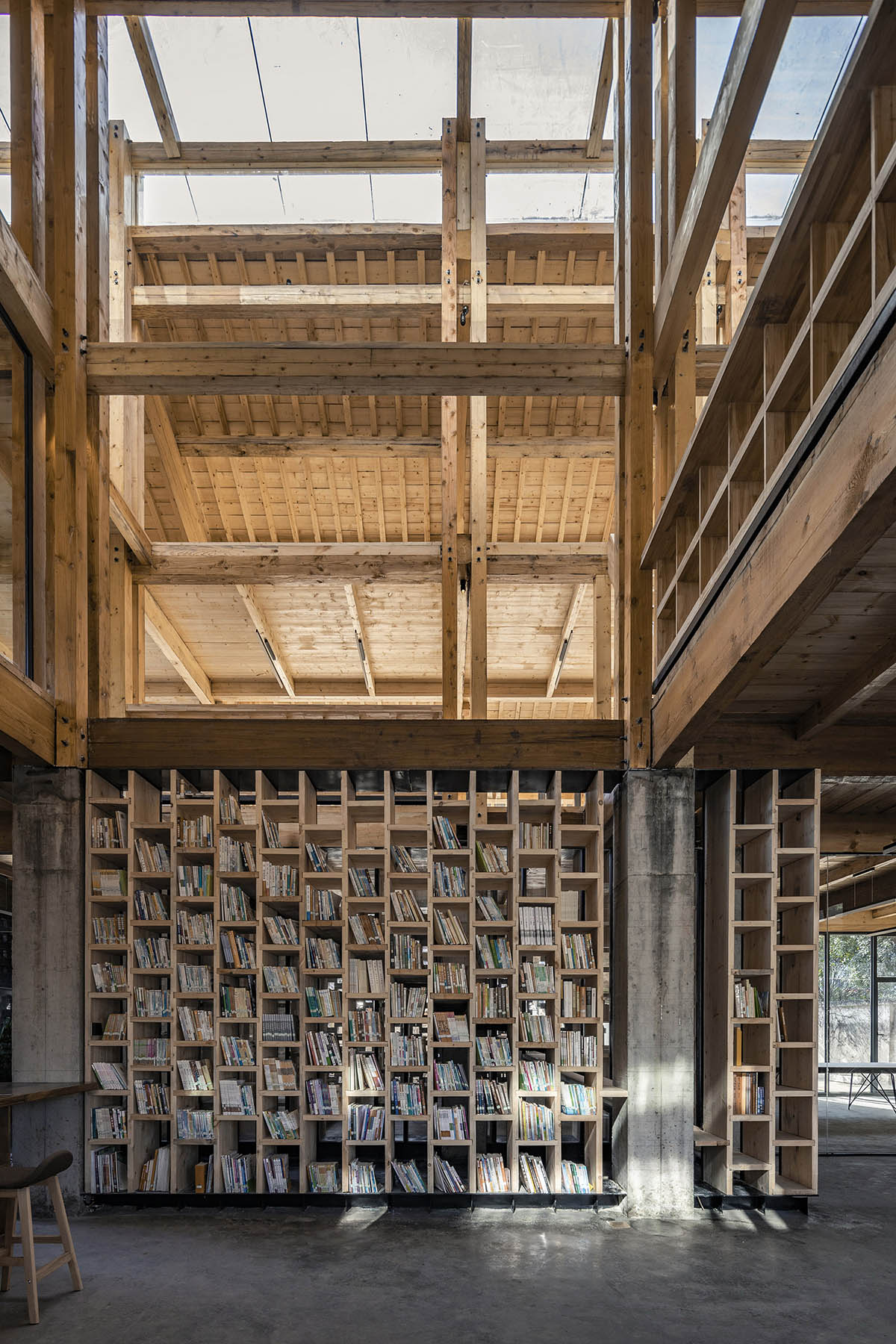 Outdoor spaces: since the elderly are the majority of the village’s population, a ramp is set at the main entrance area for their convenience. There is an alley on the west side of the building, along which a long wooden bench is placed, which clings to the exposed concrete columns and the grey brick wall. Villagers can sit on it and have a rest after busy hours. This area also serves for casual meetings and placing public notice boards. 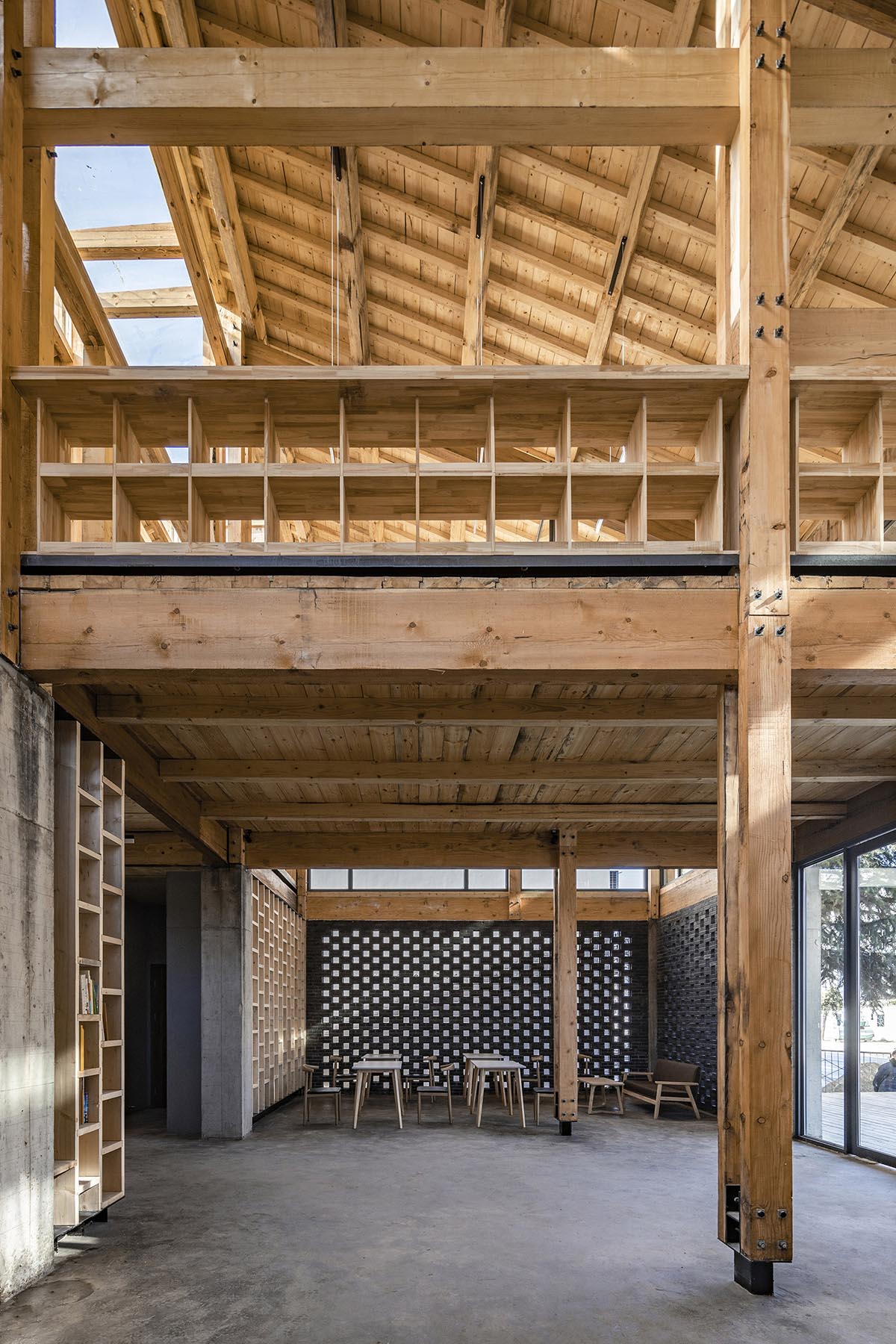 Interior spaces: based on the principle of sharing and openness, the interior space breaks the introverted layout of conventional village committee offices. Except for the conference area, the financial room and two added enclosed equipment rooms, all other spaces are open. Within the open space, a lot of convenient seating, reading and communication areas were created. 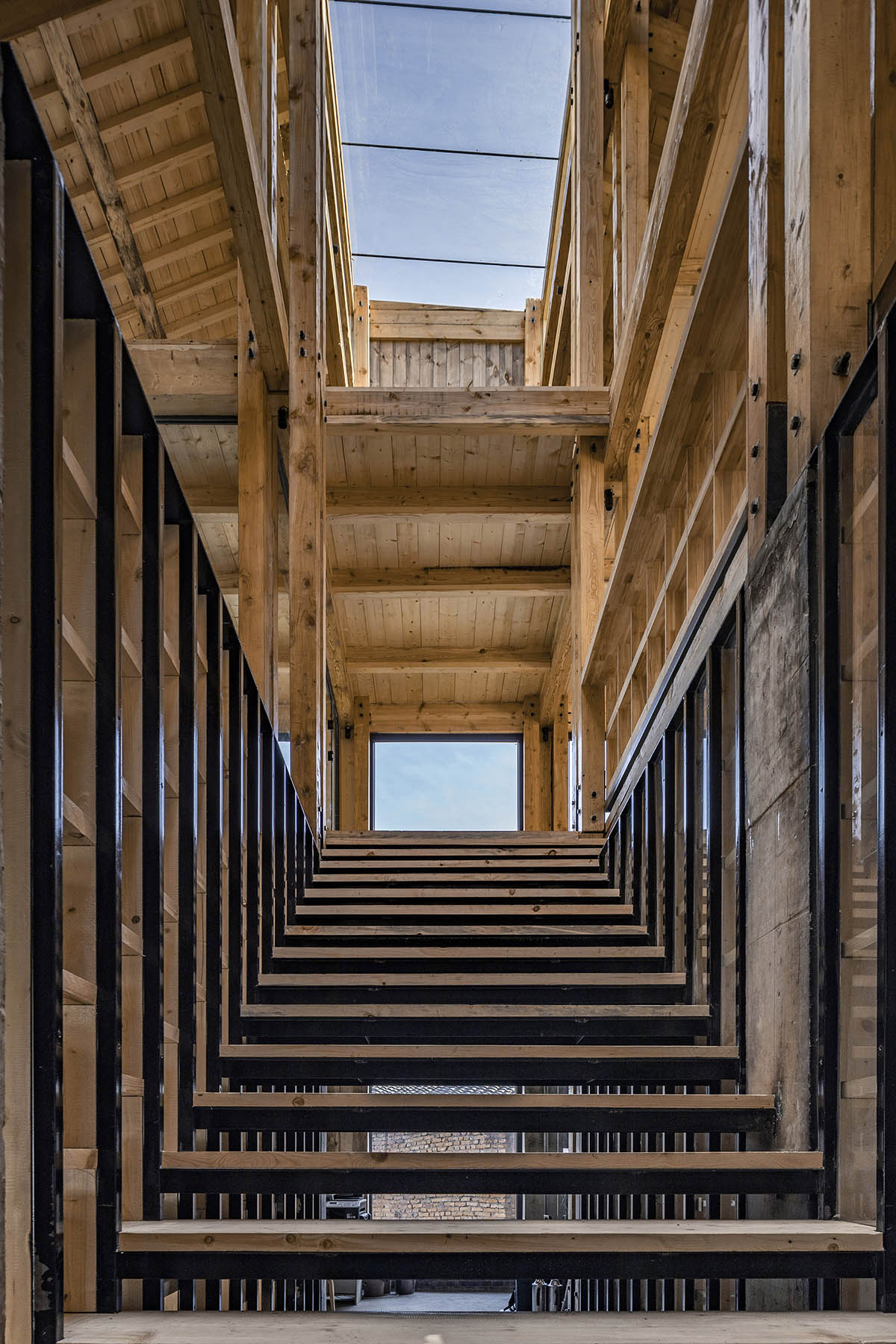 There are very few public buildings in the village, and resources are scarce. Through this project, LUO studio hopes that the building can not only meet the working needs of the village committee but also provide villagers with a more open and shared environment where they can establish more intimate interpersonal and community relationships. 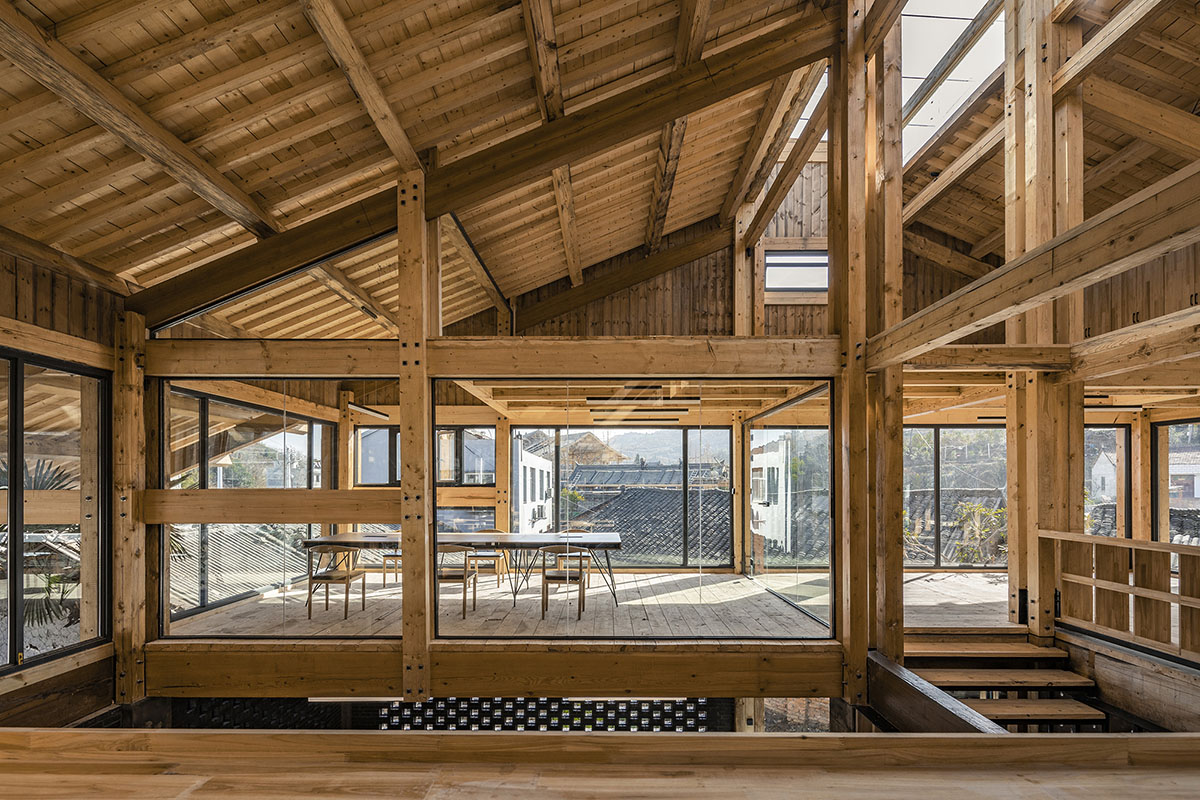 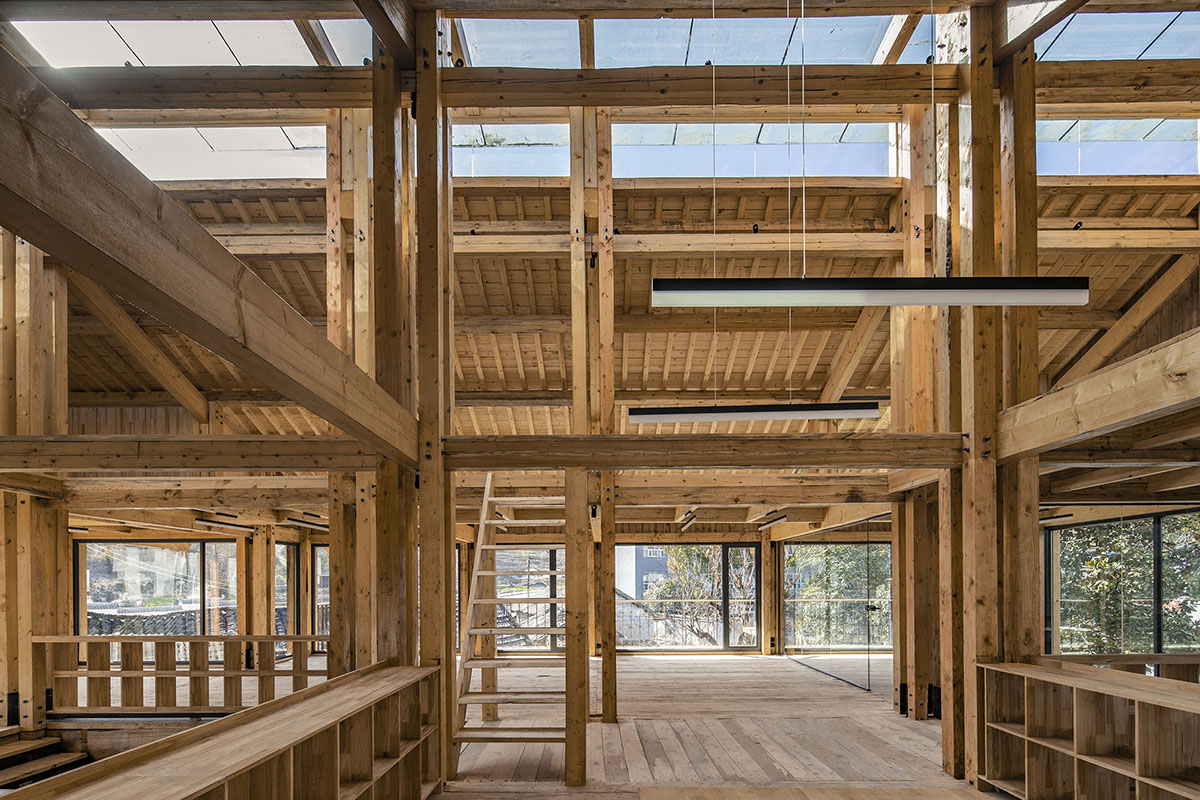 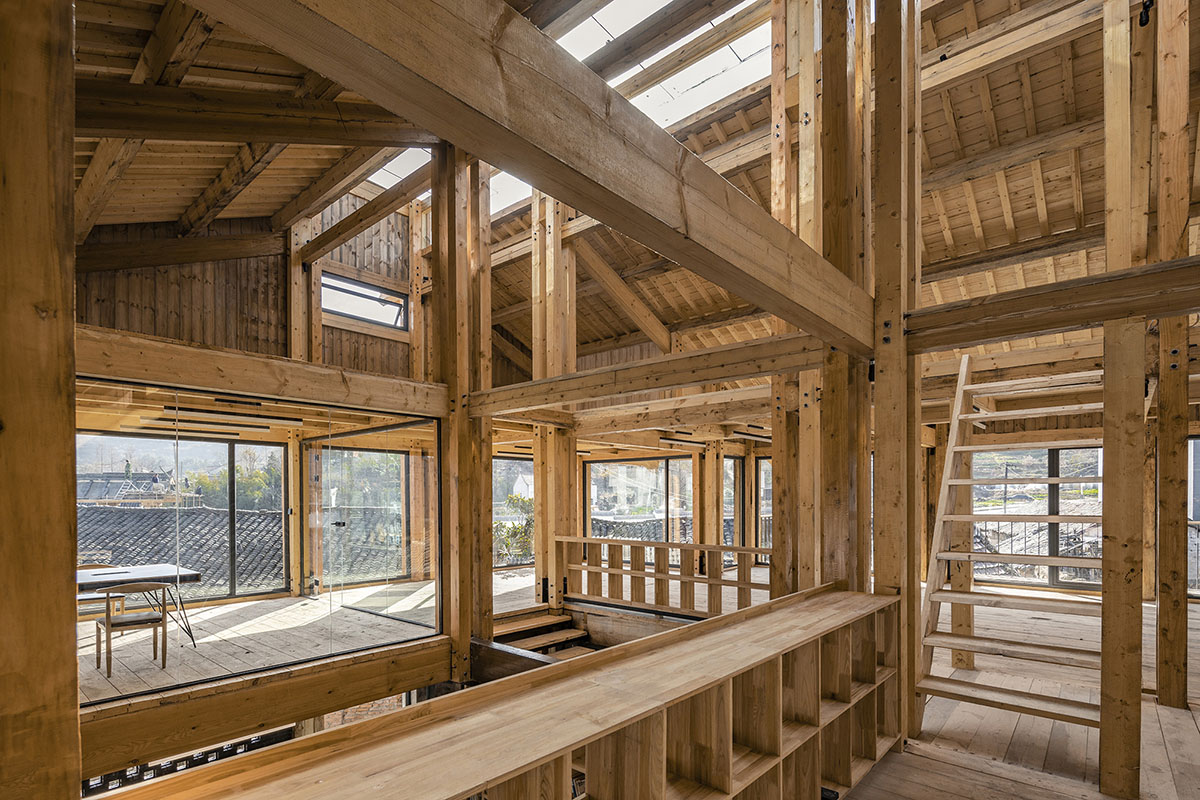 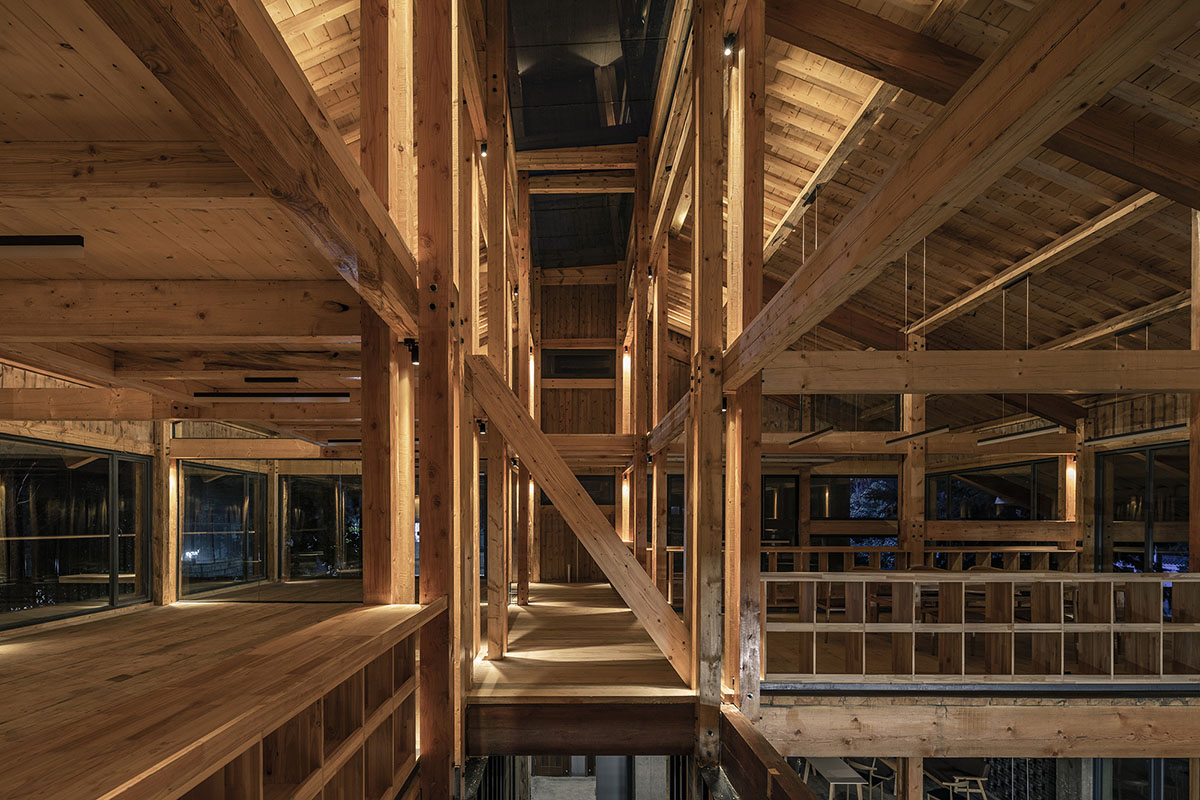 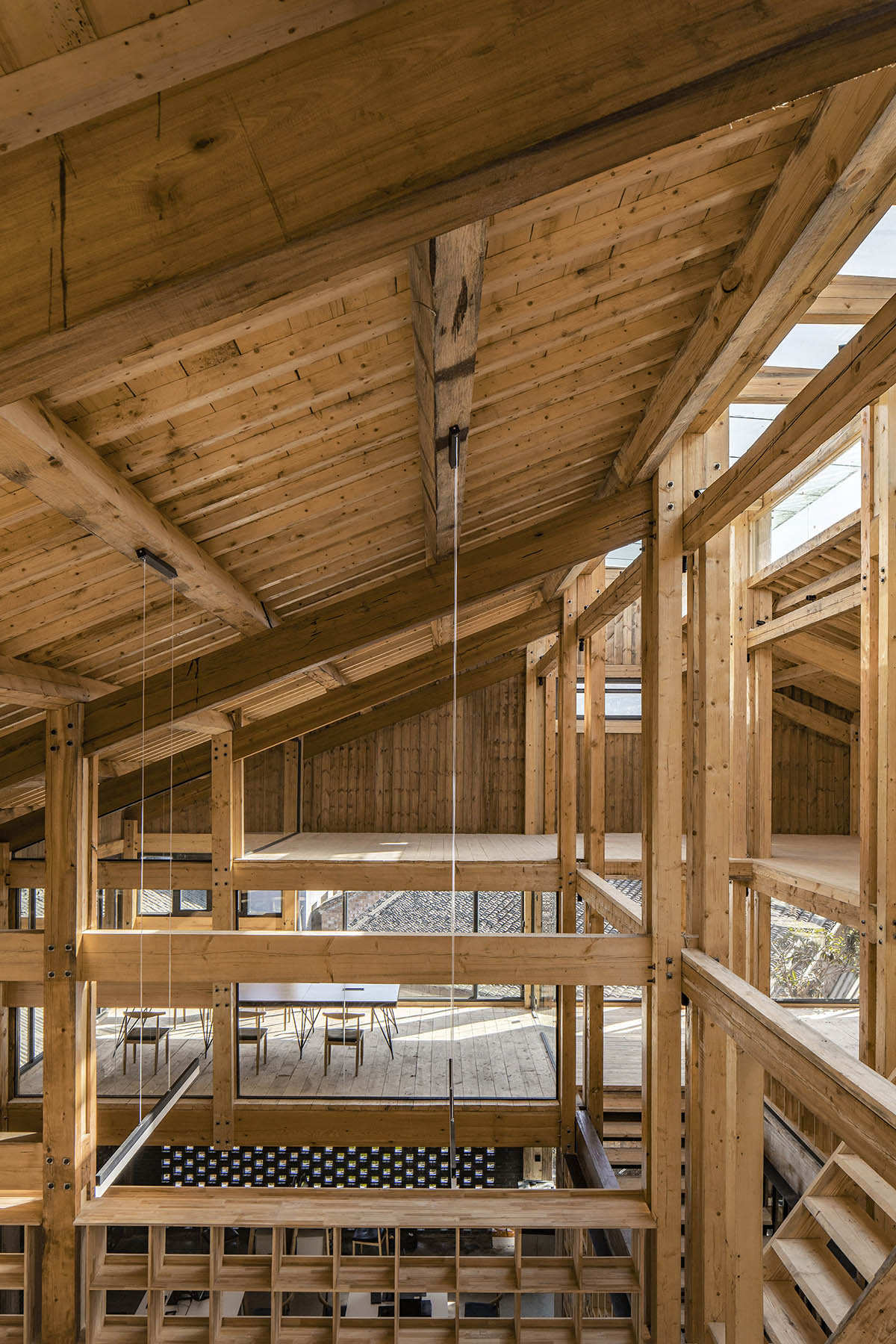 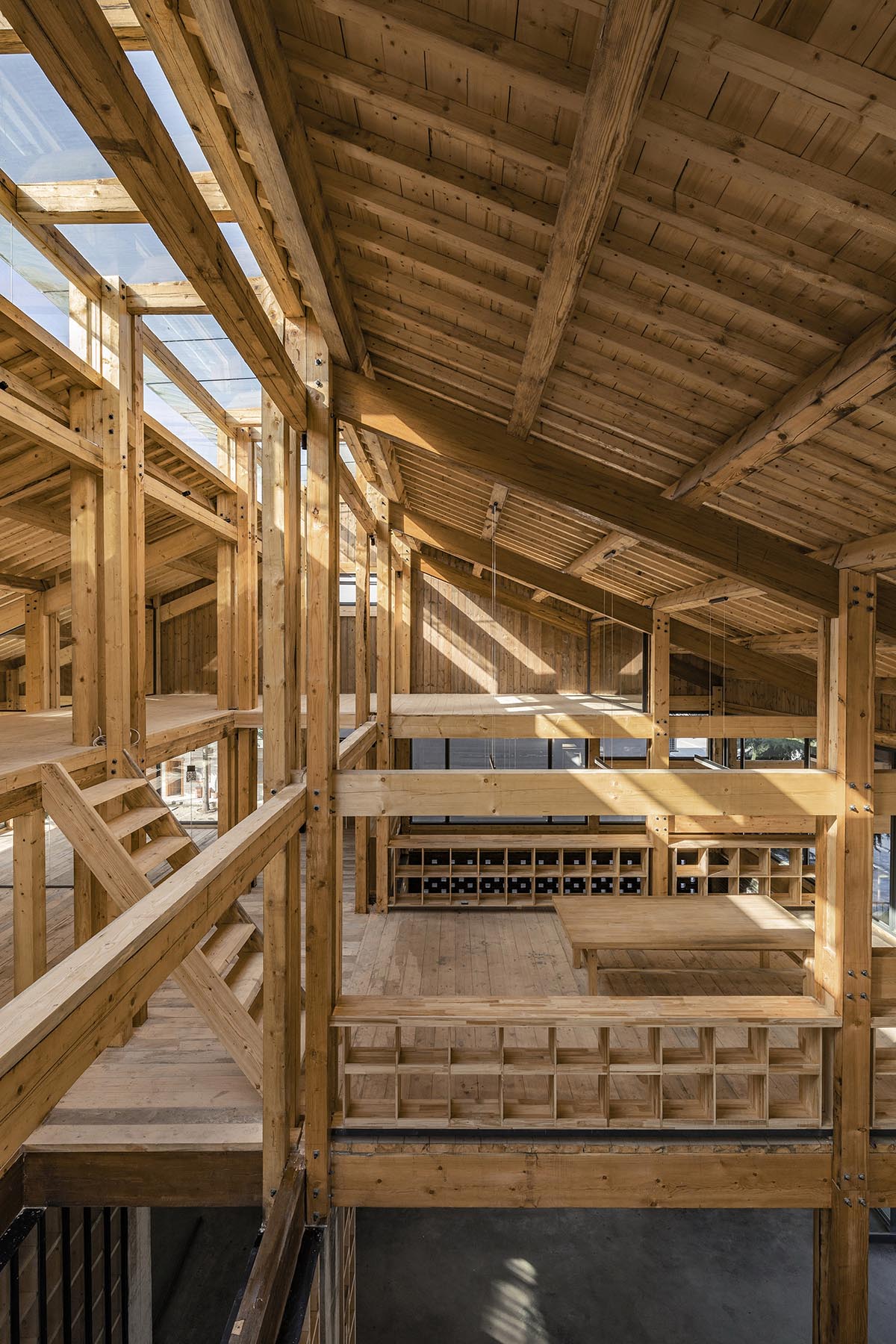 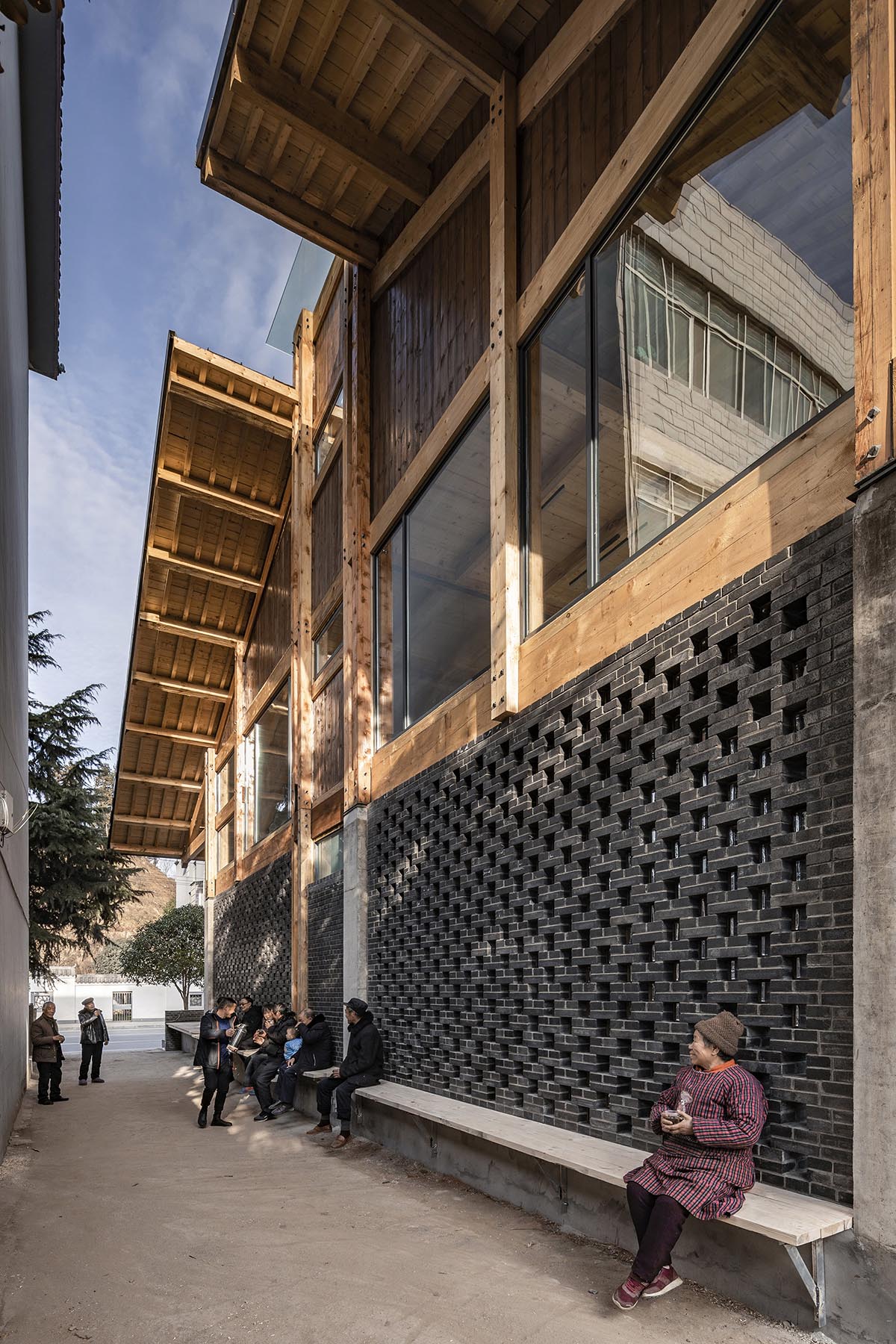 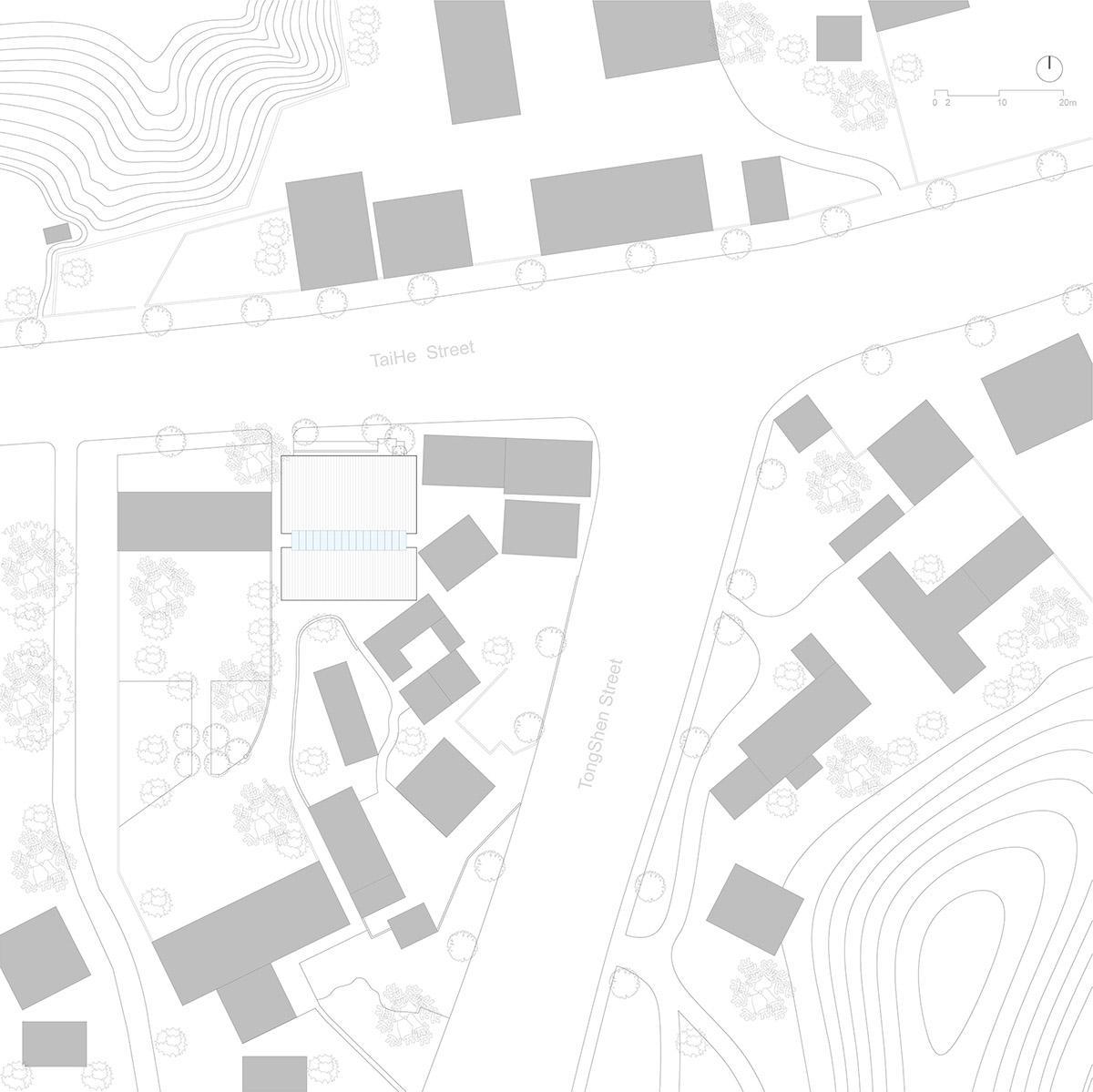 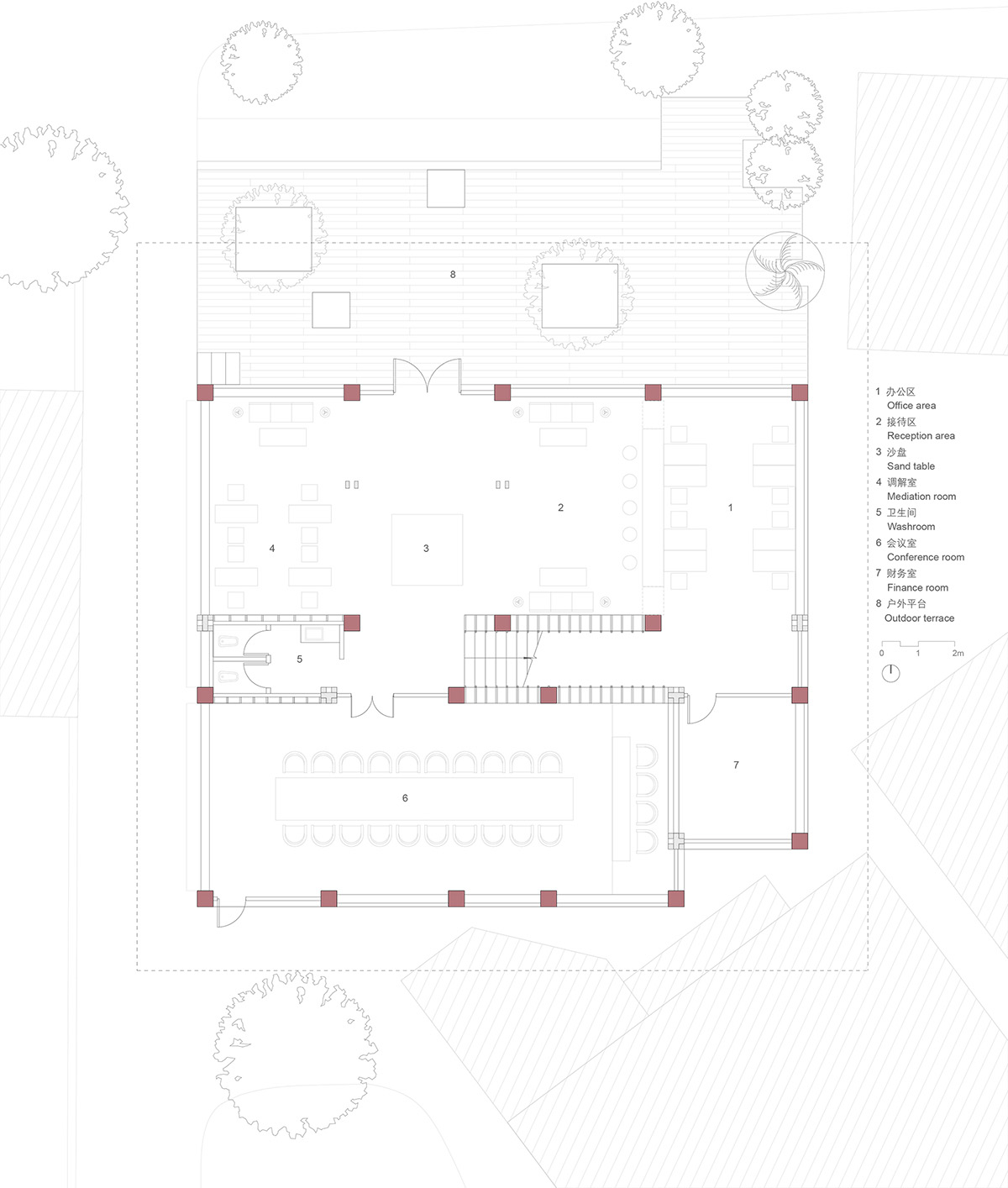 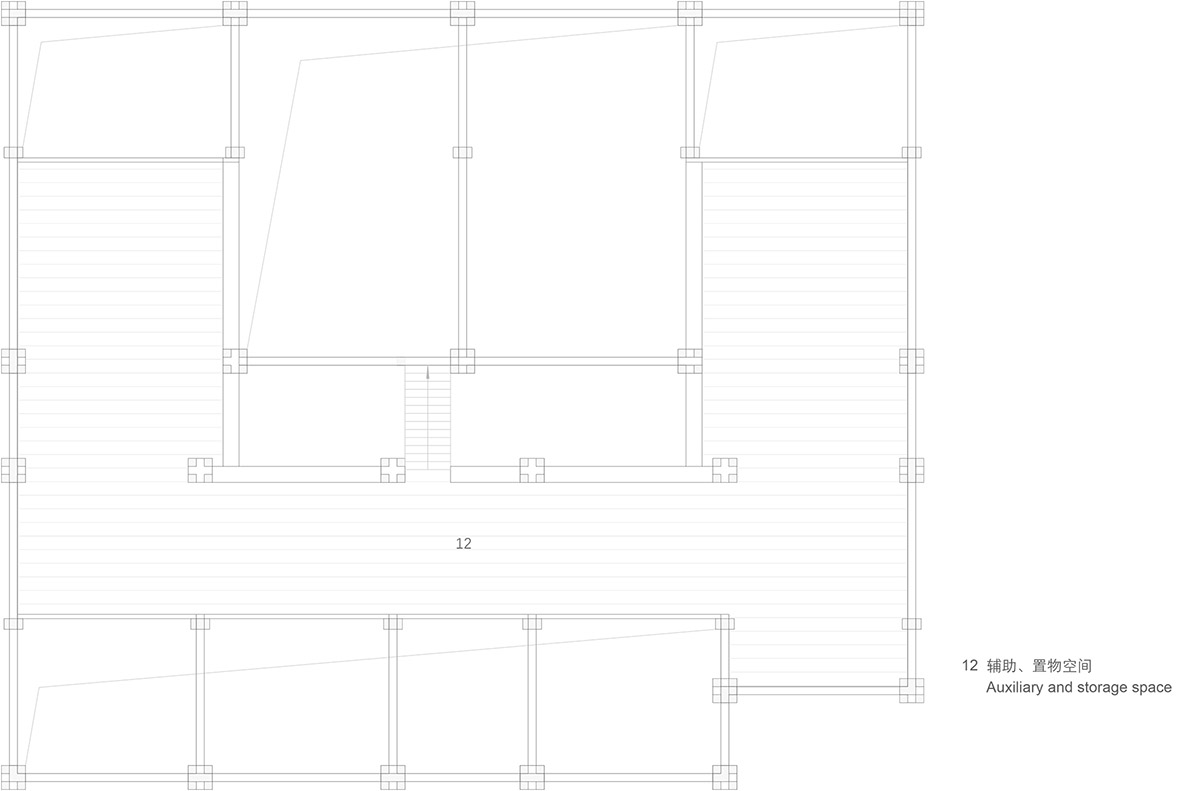 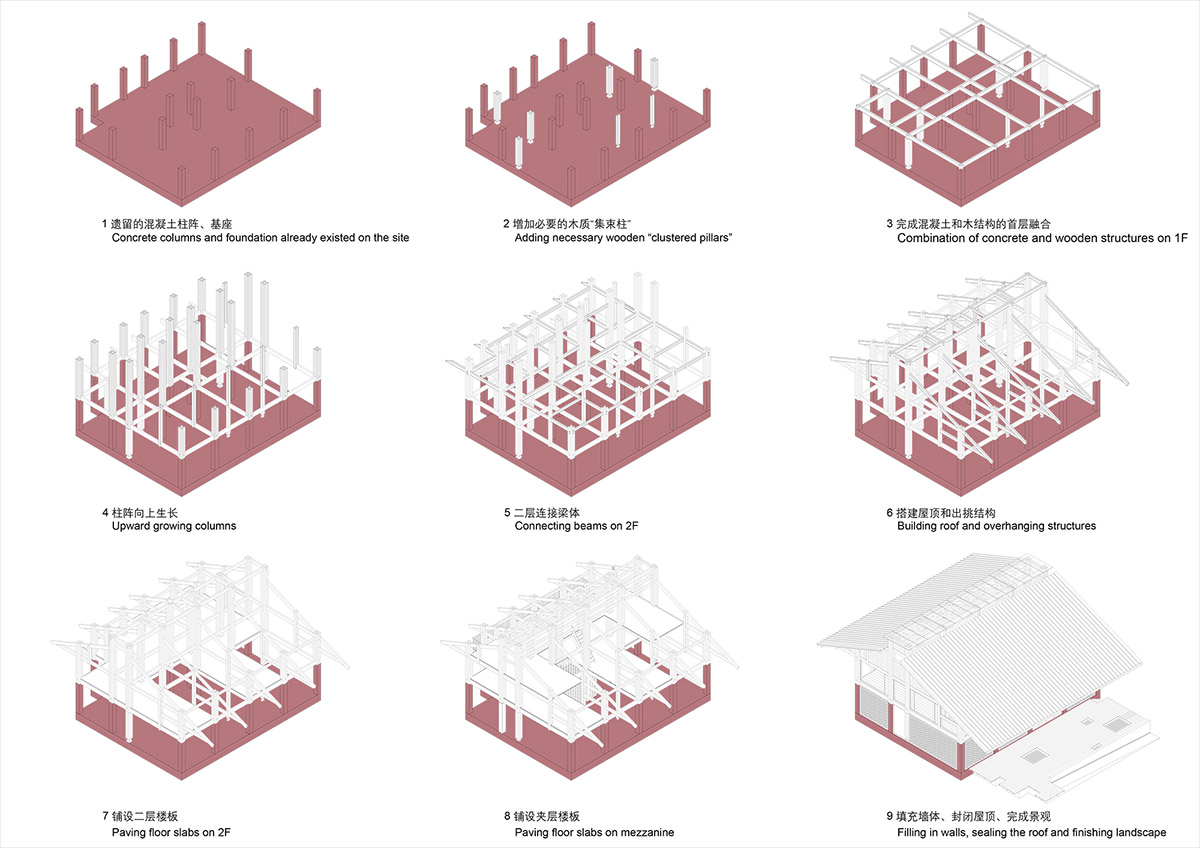 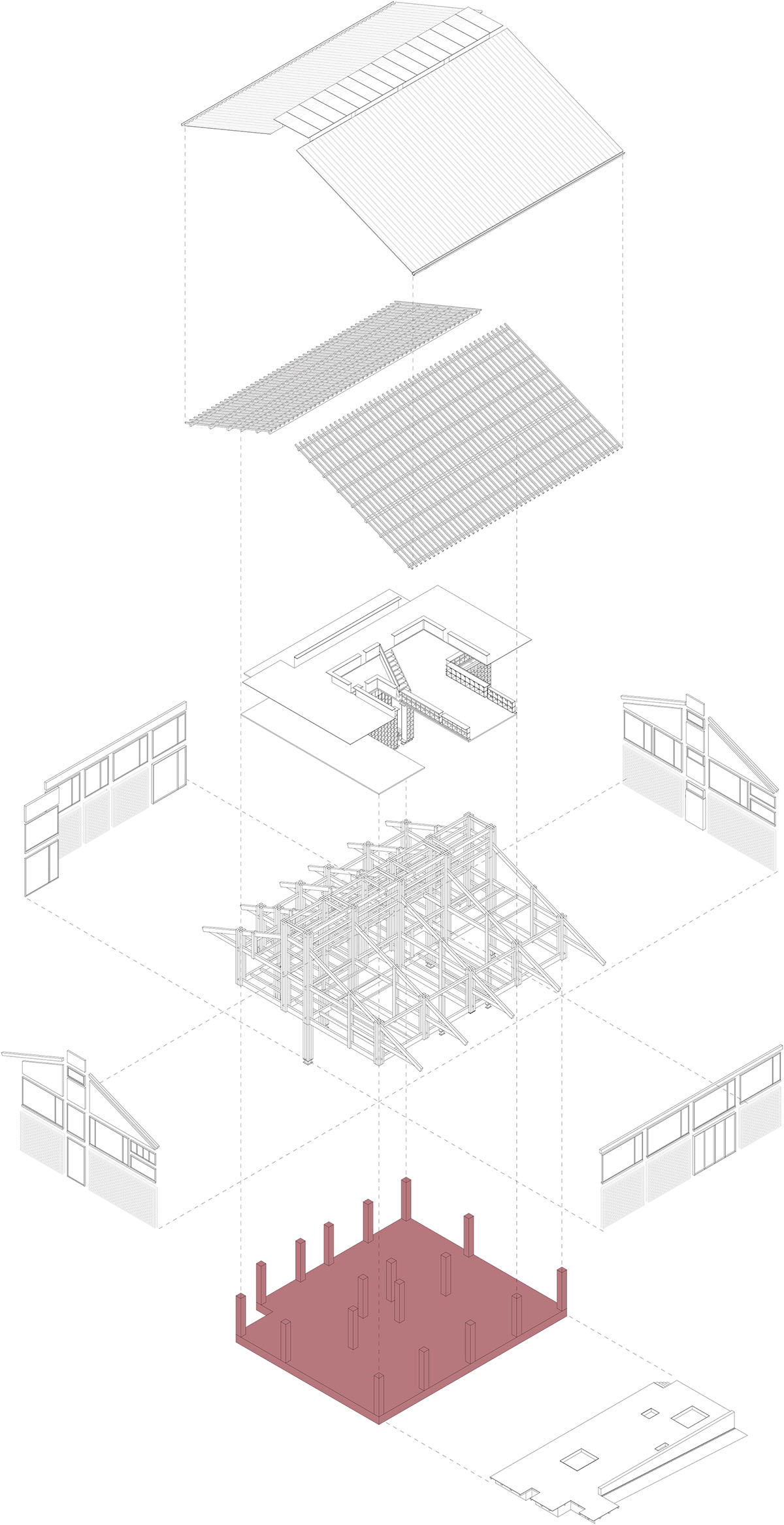 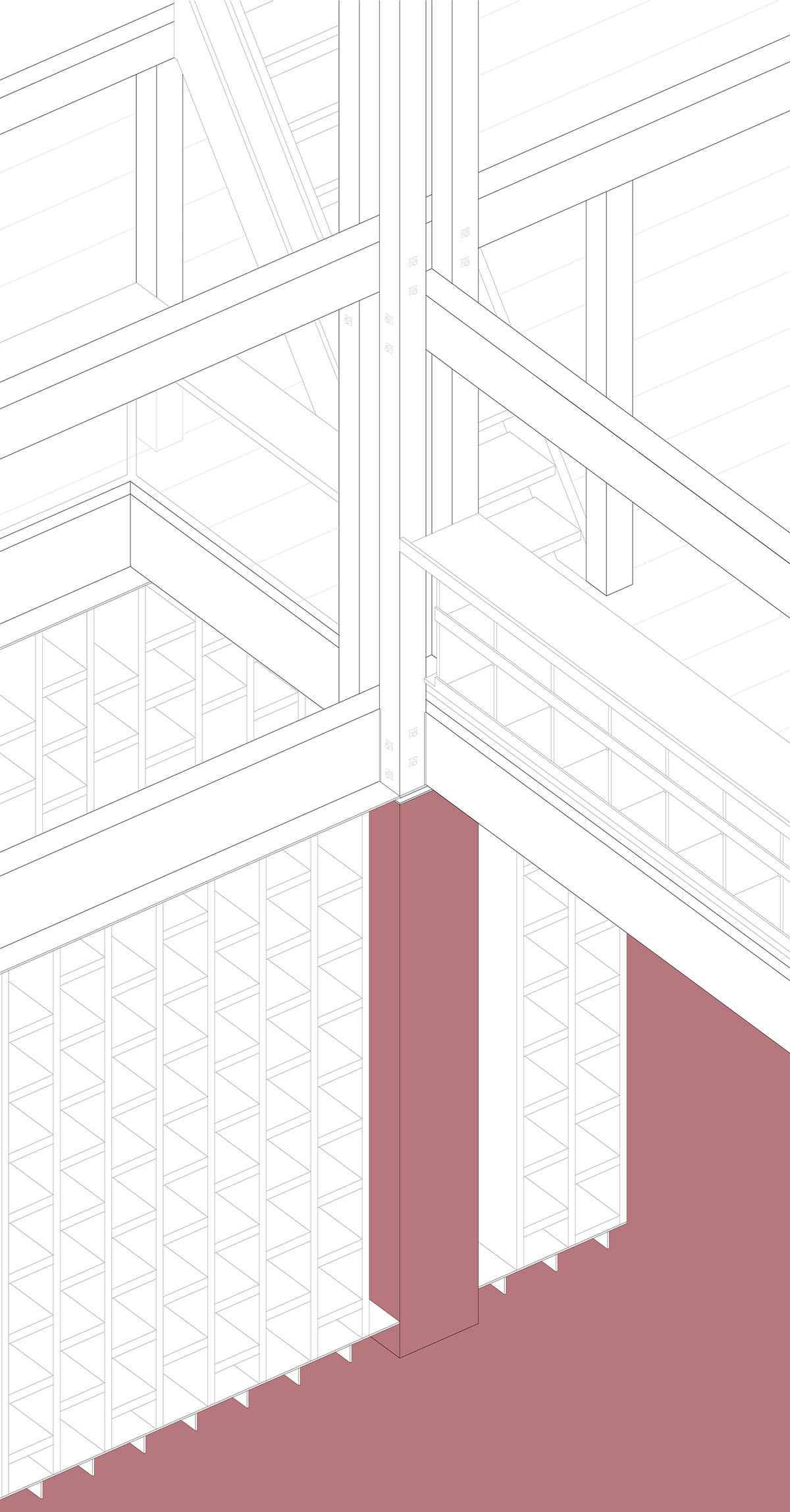