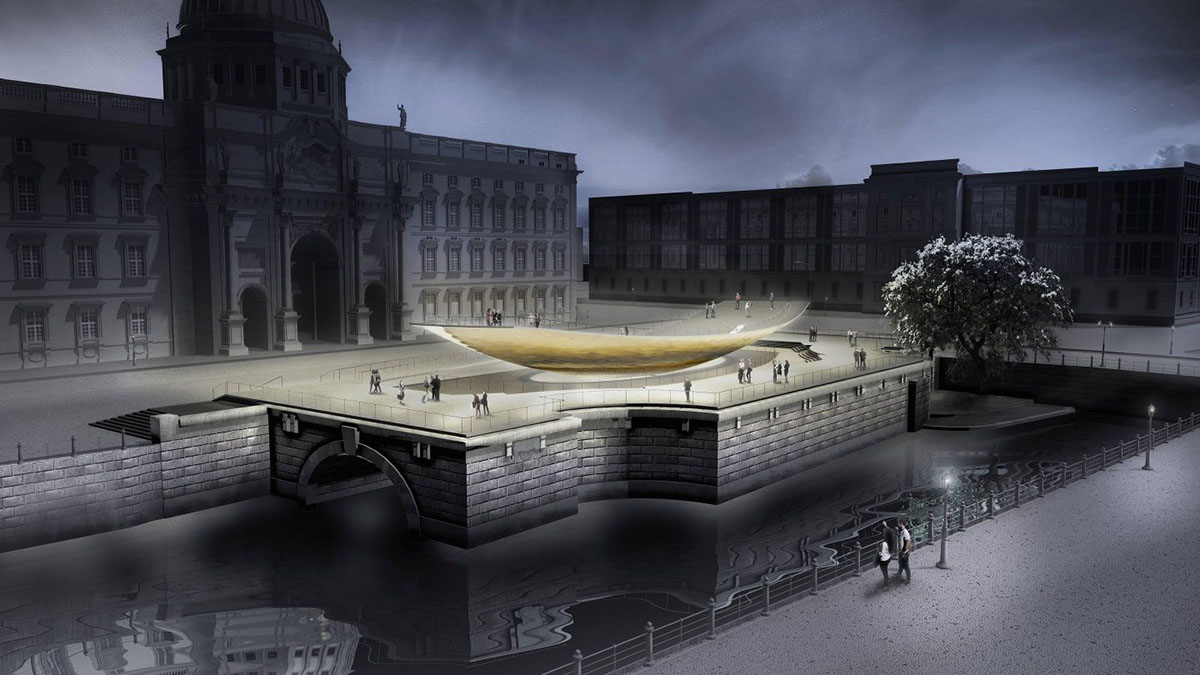 Stuttgart-based architecture studio Milla & Partner's unity monument has broken ground in central Berlin. Called The Monument to Freedom and Unity, the 50-metre long kinetic structure was designed as "a social sculpture" and "platform" that allows people to interact each other.

Milla & Partner won a design competition, called Citizens in Motion, with choreographer Sasha Waltz, and the memorial aimed to honour the brave men and women who, in a peaceful revolution in 1989, allowed the wall to come down and Germany to be reunited.

Although the project received approval by the German parliament in 2017, the project was rescheduled several times due to budgetary reasons and as bats invaded the project site.

The Monument to Freedom and Unity is being built in the centre of Berlin where the historical axes “Unter den Linden” and the “Museumsinsel-Lustgarten-Humboldt forum” meet, across from the western gate of the castle.

It will be built on the existing plinth of the equestrian statue of Kaiser Wilhelm I, between Schlossfreiheit and Kupfergraben. Having survived World War II unscathed, the national monument to Wilhelm was removed in 1949 by the GDR regime.

The movable bowl and the access ways to it are placed on the old plinth like a contemporary architectonic layer all of its own. This principle of layering makes it possible to combine the different levels of the old monument and the new without blurring the differences. The chequered history of the location is still there to see. 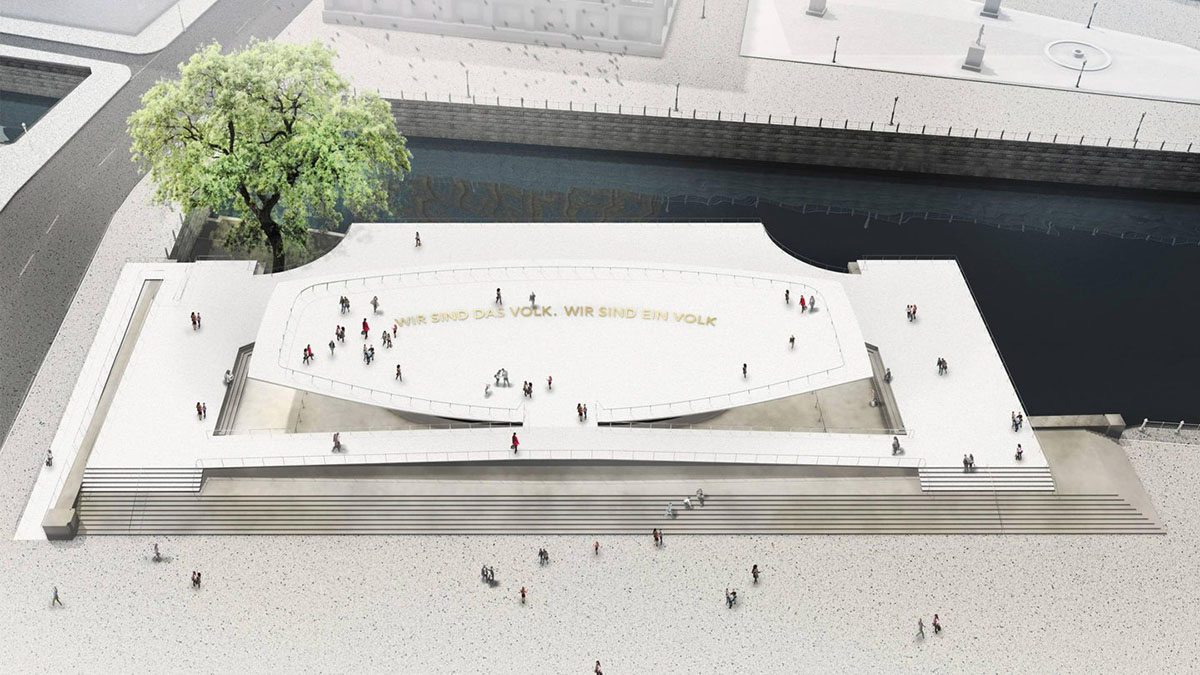 The structure will change the nature of the monument

According to the architects, as "with the peaceful revolution of 1989, the visitors have to communicate and decide on joint action, in order to create the motion: If there are at least 20 more people standing on one half of the bowl than on the other, the bowl will start to move, slowly and gently."

"New perspectives open up. The performative, changing nature of the monument is something to be seen and personally experienced."

The bowl is to be built using a weight-optimised framework structure of steel components, as used for the construction of bridges. It extends over a longitudinal and lateral axis of 50 meters and 18 meters.

At its thickest point, the bowl measures 2.50 meters thick and tapers to just a few centimetres at the edges. 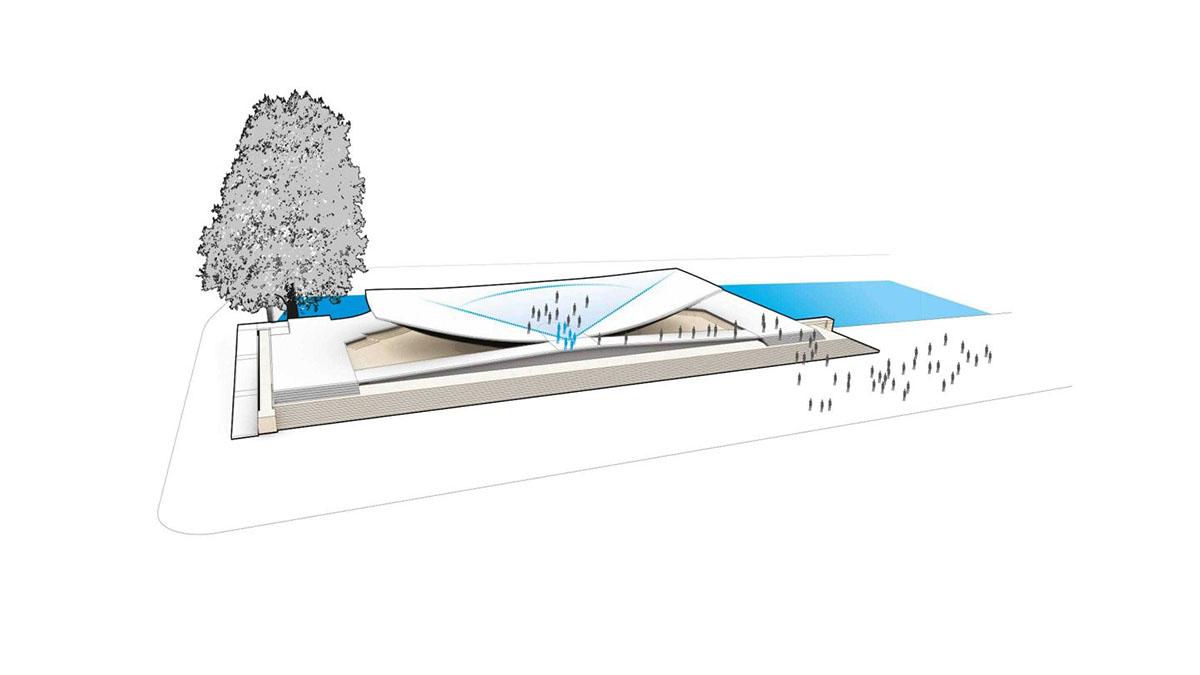 The unhurried motion of the bowl is triggered by its visitors. Their weight determines the degree and speed of its movement. A combined spring and damping system means that the motion will always be gentle.

Faceted metal alloy panels clad the exterior of the bowl. The upper surface is fitted with compacted high-grade chippings that adhere to the surface and provide a highly slip-proof layer with excellent rainwater seepage properties.

The safe and barrier-free use of the Monument is made possible due to its design in accordance with the Berlin construction code and the corresponding stipulations of barrier-free construction. 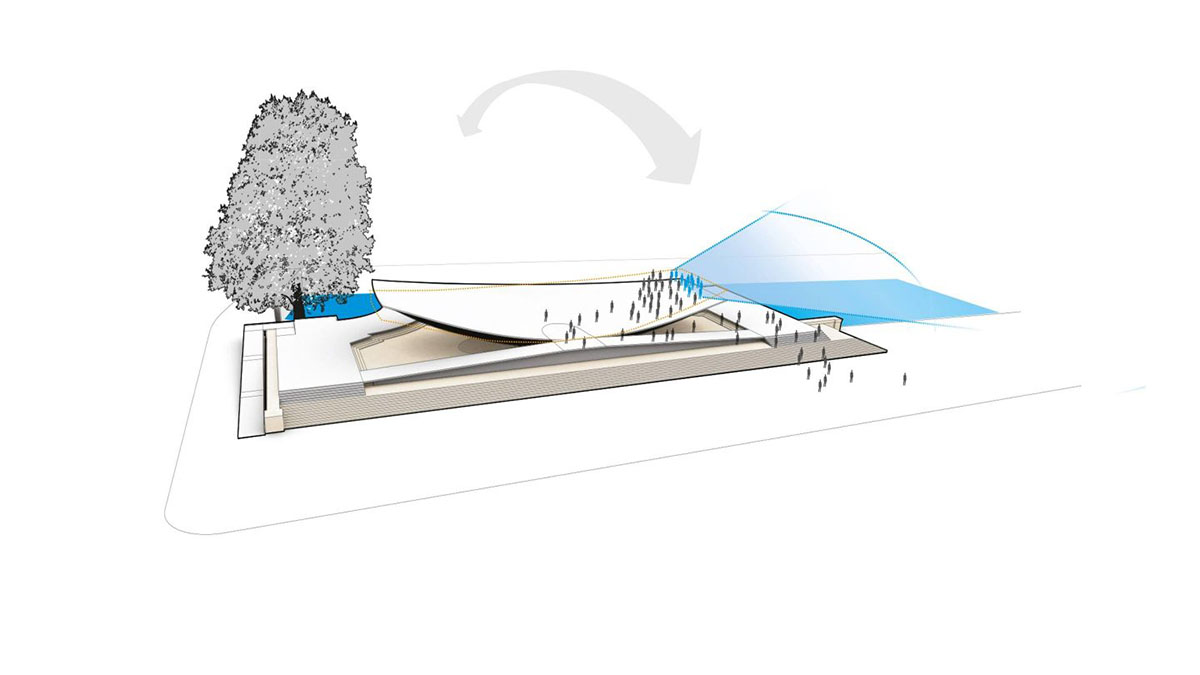 "Freedom and unity are not static conditions"

According to the architects, "freedom" and "unity" are not static conditions. These two actions will occur at the same time through the memorial.

"It is designed to be a movable, kinetic object, the appearance of which is shaped every day by its visitors through their participation and interaction. As they take ownership of the monument, it comes alive," Milla & Partner said.

"It invites its visitors to communicate and to act together, far more so than is usually the case when contemplating a monument. Freedom and unity are not static conditions."

"They need to be constantly redefined and require constant commitment. This process-dependence creates the intellectual basis of the Monument to Freedom and Unity."

The monument will approximately be able to carry 1400 people on the structure, having approximately 150 tons load-bearing capacity. Its accessible area covers 700 square meters.

Milla & Partner was founded in 1989 as a creative consulting agency. Sebastian Letz became Milla & Partner’s Creator Director in 2007, and has been a partner since 2009.