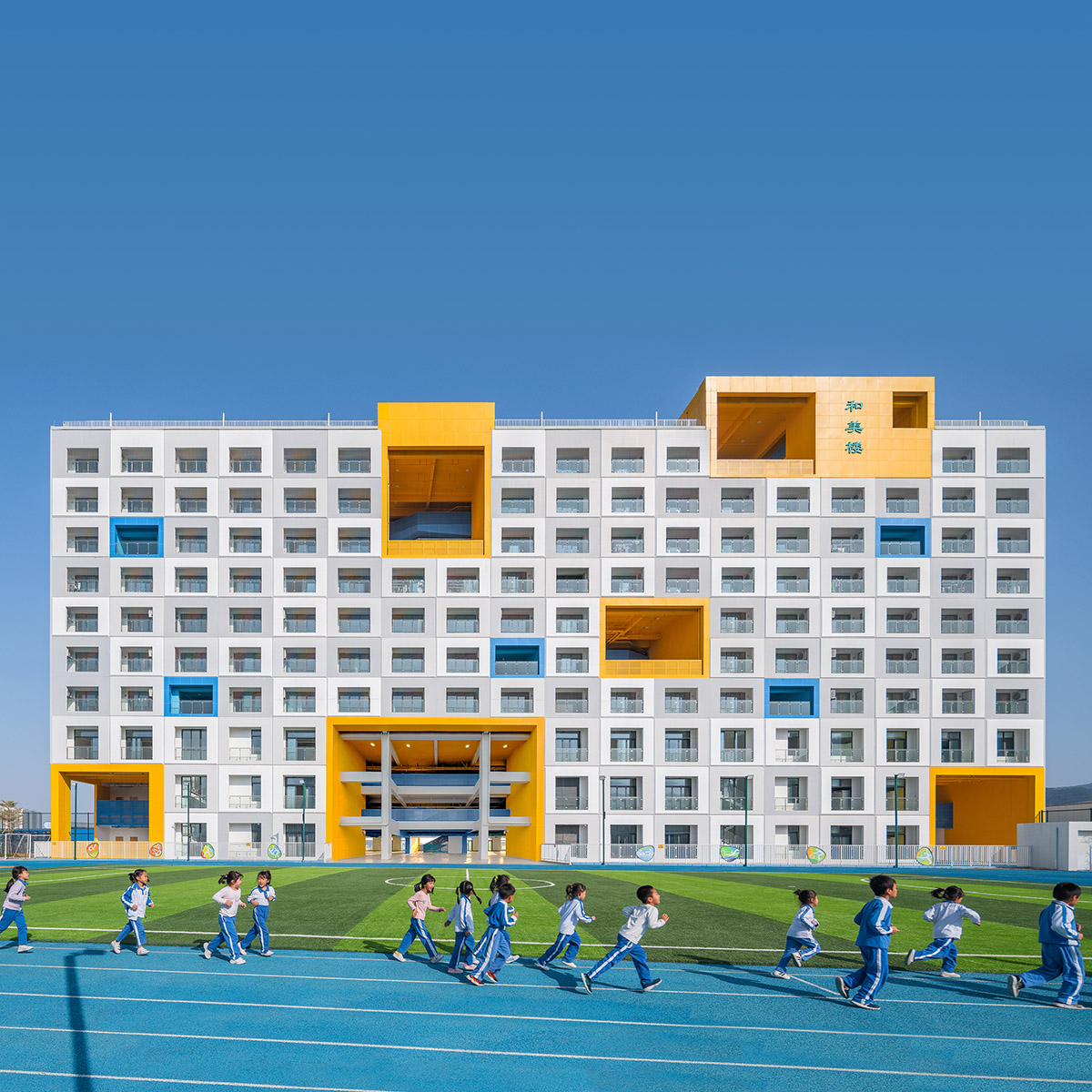 Named Jinlong School, the school was developed to be completed within about 13 months (which normally requires 2-3 years) on a relatively small site of roughly 16,000 square meters for a school campus that has to cater to a manifold of functions.

In 2018, Crossboundaries designed a 36-classroom school, to be located in the newly established Pingshan district in the Chinese metropolis Shenzhen. 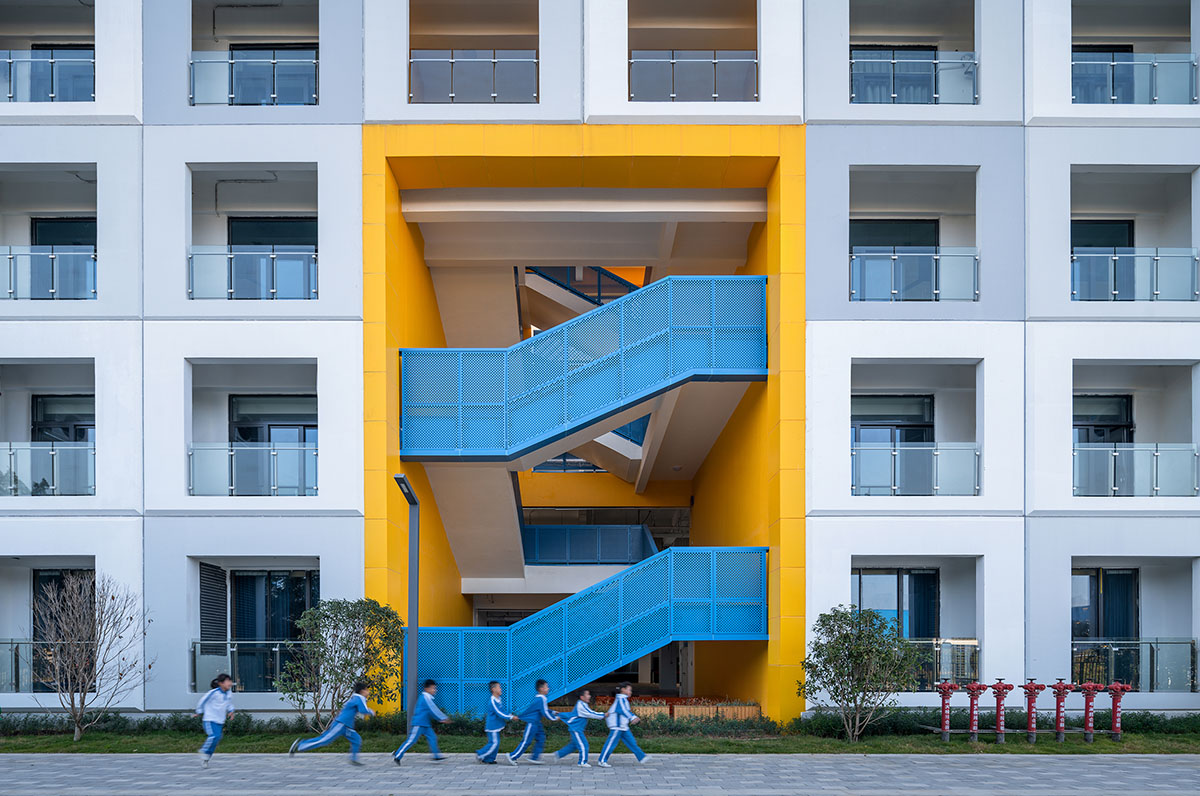 "The venture was not only an attempt to maximize the potential of prefab architecture but also an opportunity to realize and to contribute to a project of significant social impact," said Crossboundaries.

The new school functions as a multifunctional, predominantly prefab structure, with maximum flexibility and aesthetic personality through design accents whilst providing clever solutions for a high-density project. 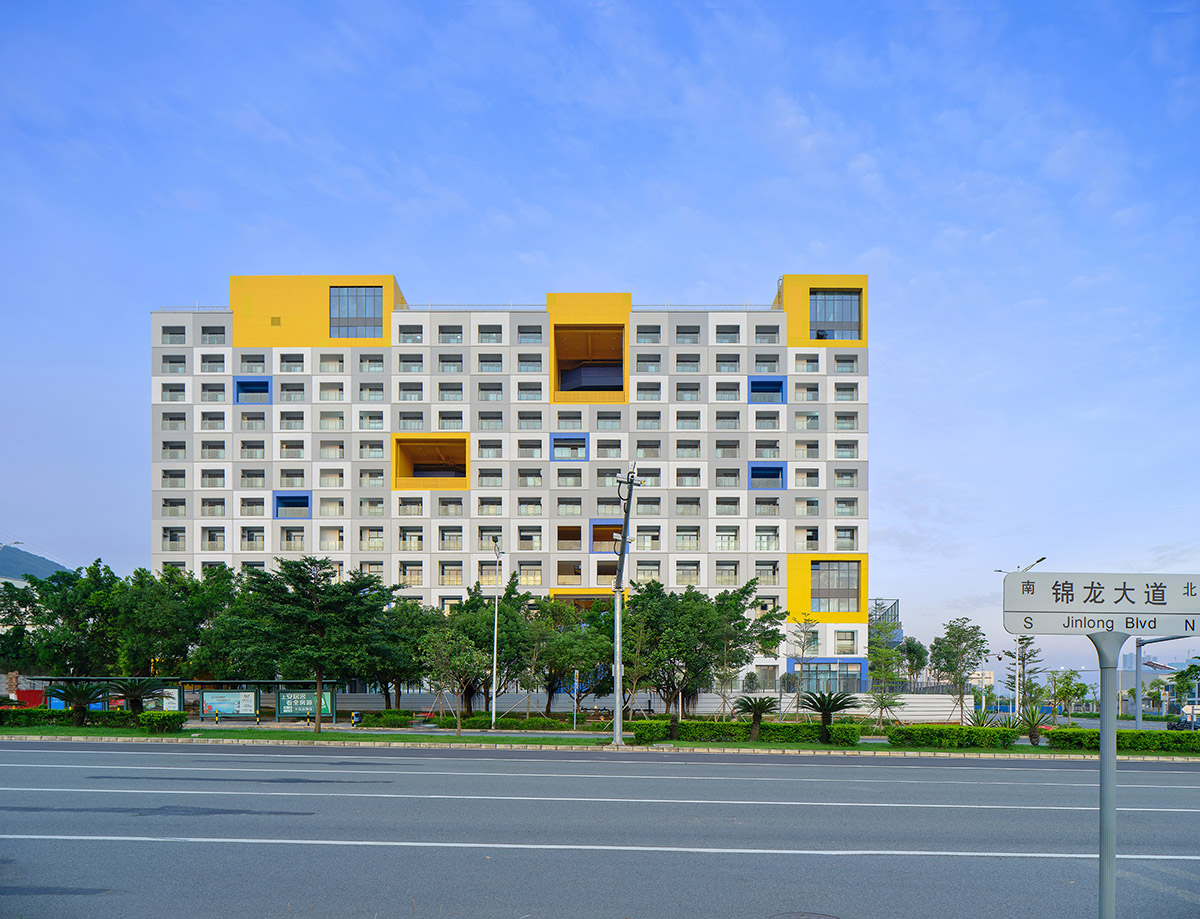 As one of China's first-tier cities and hi-tech capitals, Shenzhen is facing some practical challenges due to its rapid population expansion, among them an overall public-school shortage. To put it into context, compared to Guangzhou, another Chinese megacity with a comparable population of 15 million with 961 primary schools, Shenzhen has only 344 primary schools.1

Shenzhen's Pingshan District, which had been officially established in 2017, with large numbers of city dwellers moving into high-density residential areas nearby, was predicting for autumn 2018 highly exceeding enrollment numbers in its schools.

A fact that led the government to approve quickly several Prefab projects at once, giving itself just a bit more than one year to add a few more schools to its district. Crossboundaries, having already made a name for itself with other school architecture projects in China, took on the Jinlong Project. Obligatory and part of the brief was the use of as many concrete prefab components and metal composite elements as possible. 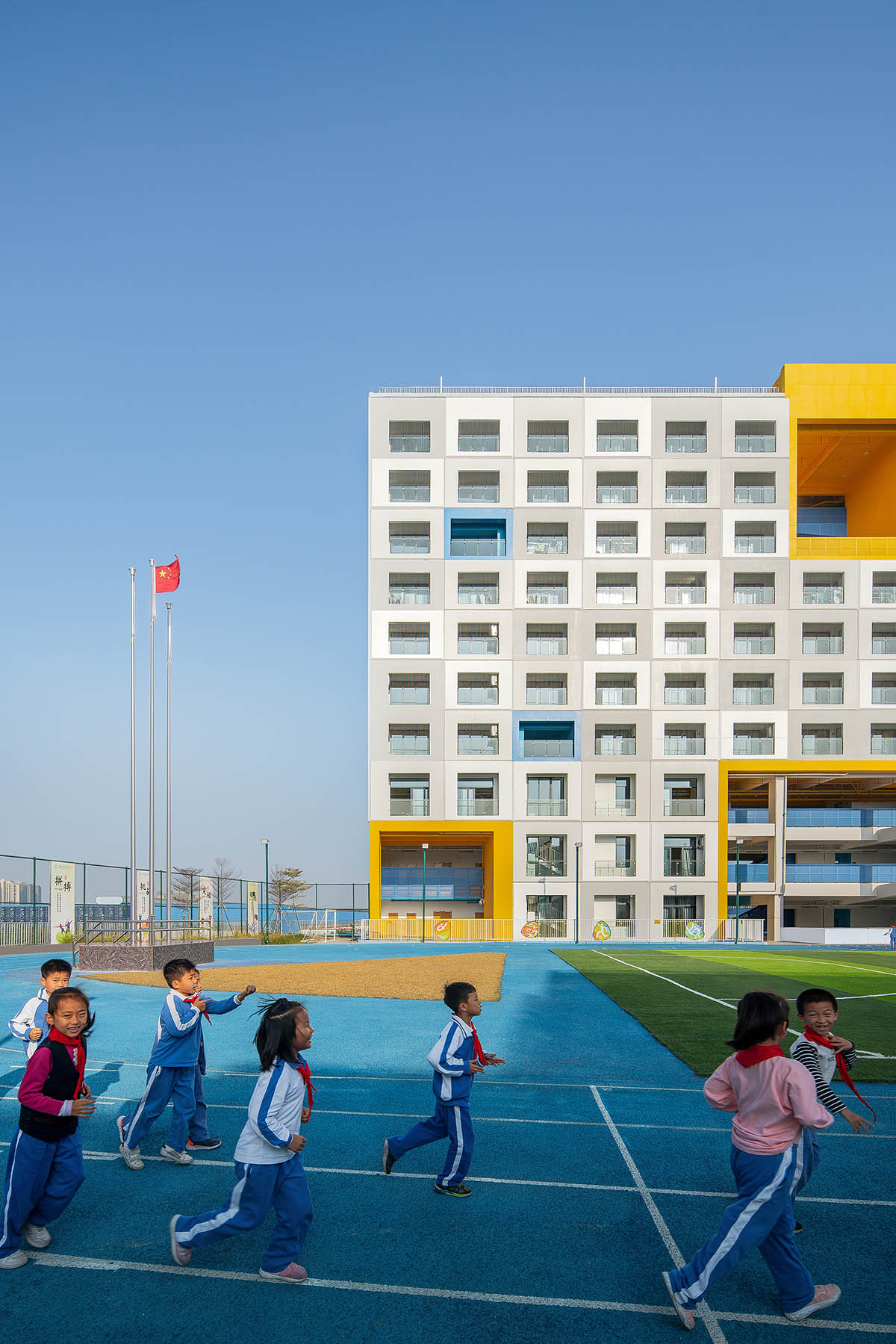 "Looking at the briefing, there appeared to be so many limitations" said Hao Dong, Founding Partner of Crossboundaries," limited time, a limited budget, a potentially limited creativity due to the mandatory use of prefab, a very small site area, with all those functions to integrate."

"Then again, we were extremely intrigued to take on this project, to create a human, people-oriented school within all those limitations, and at the same time to still be as creative as possible, in designing a space that provides a solution for a realistic problem that we all have to face in quickly expanding cities in the future," Dong added. 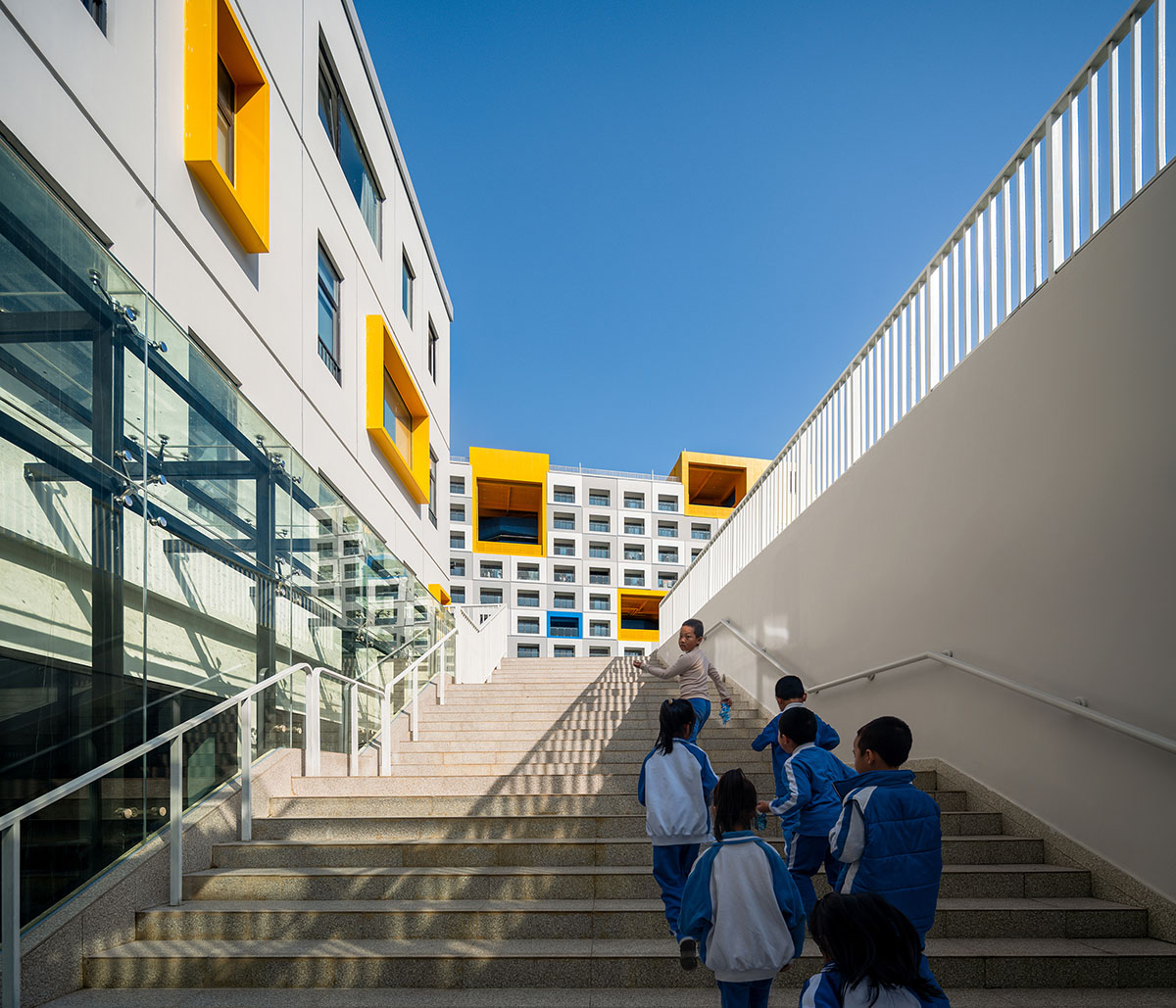 Due to the use of a local, Shenzhen based prefab elements factory, transportation costs were kept to a minimum. Additional advantages such as energy conservation, environmental friendliness and earthquake resistance were also incorporated. 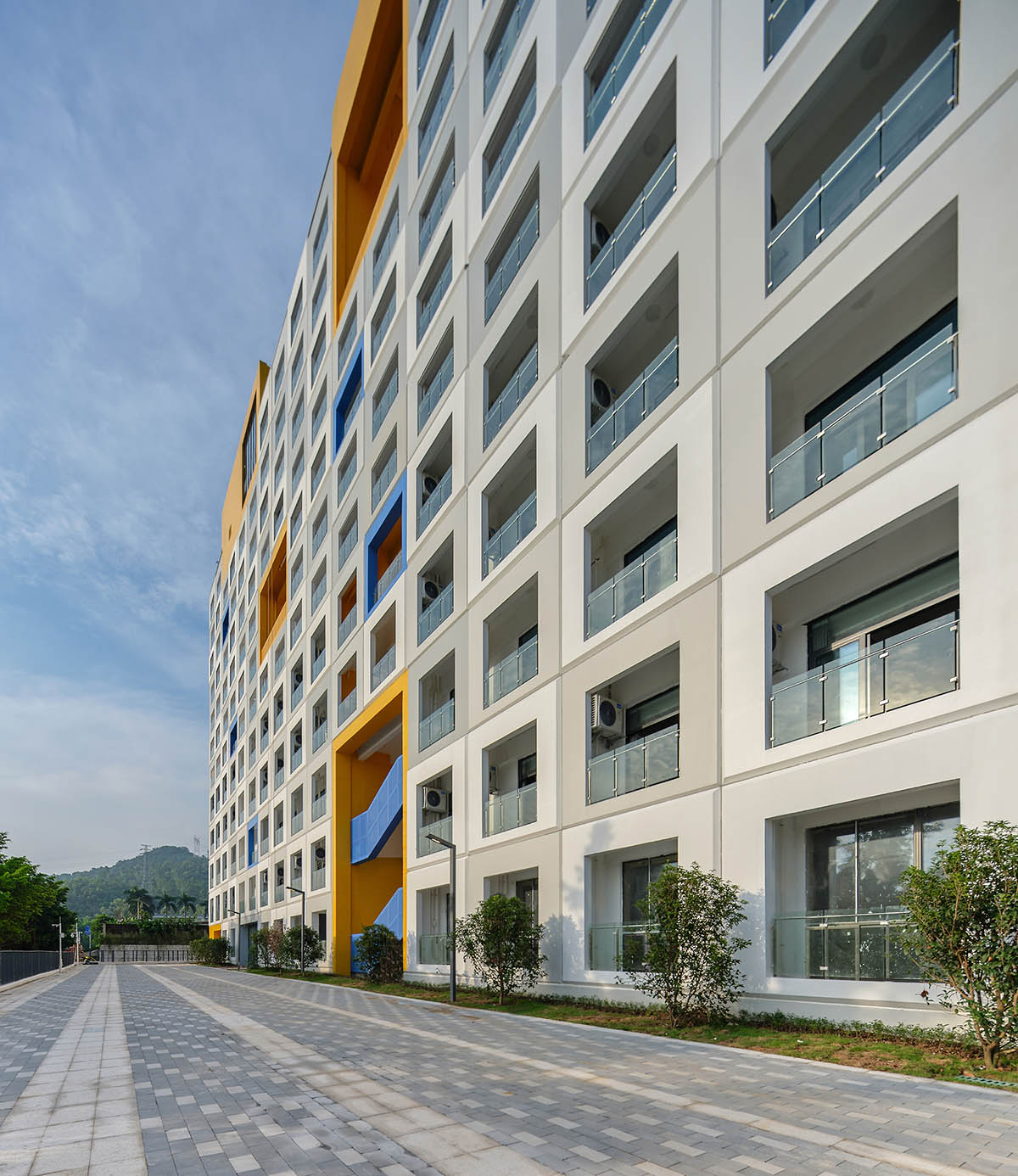 The architects managed to give the school a distinctive aesthetic quality, its very own individual design character, whilst also paying attention to people-oriented spatial relationships.

The overall complex hence represents a concise layout solution, with a compact conceptual approach. Modular applications are mainly used in the residential and educational buildings (e.g. dormitories, teaching and other classrooms) whereas public spaces and some other areas are configured in more conventional construction methods. 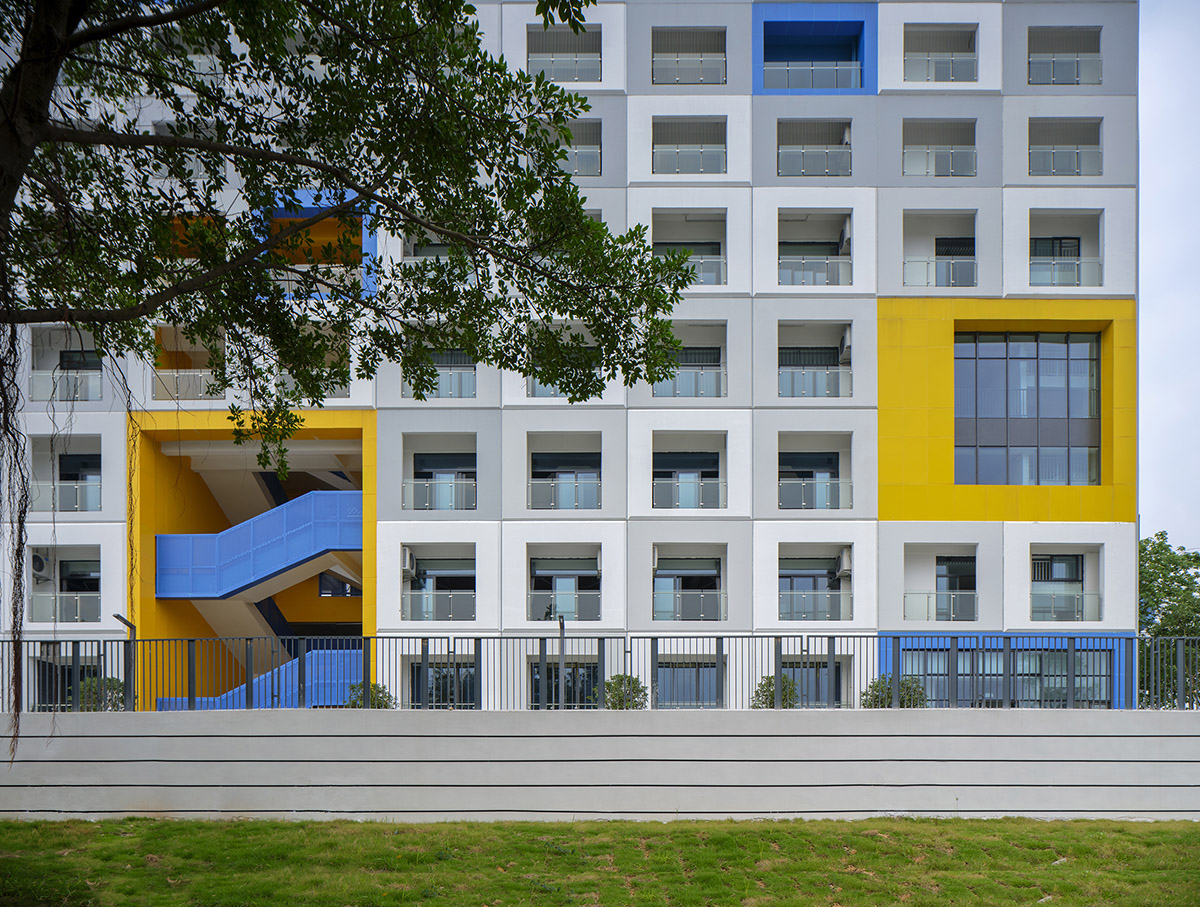 Crossboundaries integrated and introduced a combination of variations in an overall unified façade. For the three teaching buildings, the architects applied six kinds of prefab panels, with different width and different arrangements of window openings. Although the classrooms on each floor share the same layout, each of them has a different external wall.

This becomes especially evident on the outside, with the windows appearing in an alternating rhythm in sizes, vertical and horizontal rectangular shapes, also resulting in a change in density on the façades. Additional accents are set with yellow, protruding metal frames around selected window openings. 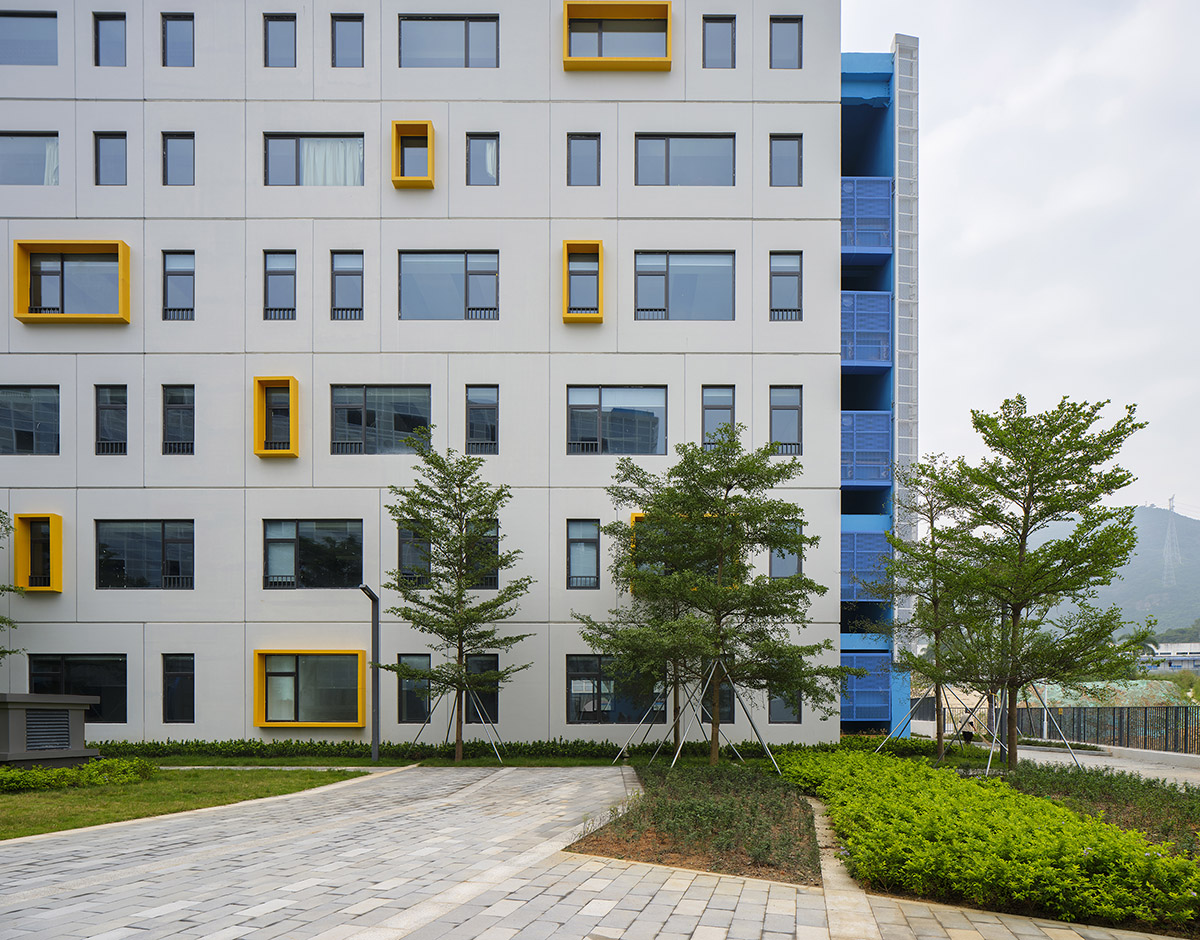 The color concept further defines circulation areas (paths and corridors) in blue and meeting hubs for children/students (e.g. in the dormitory) in yellow. Yellow is therefore indicating zones where people stay and socialize, and move less. 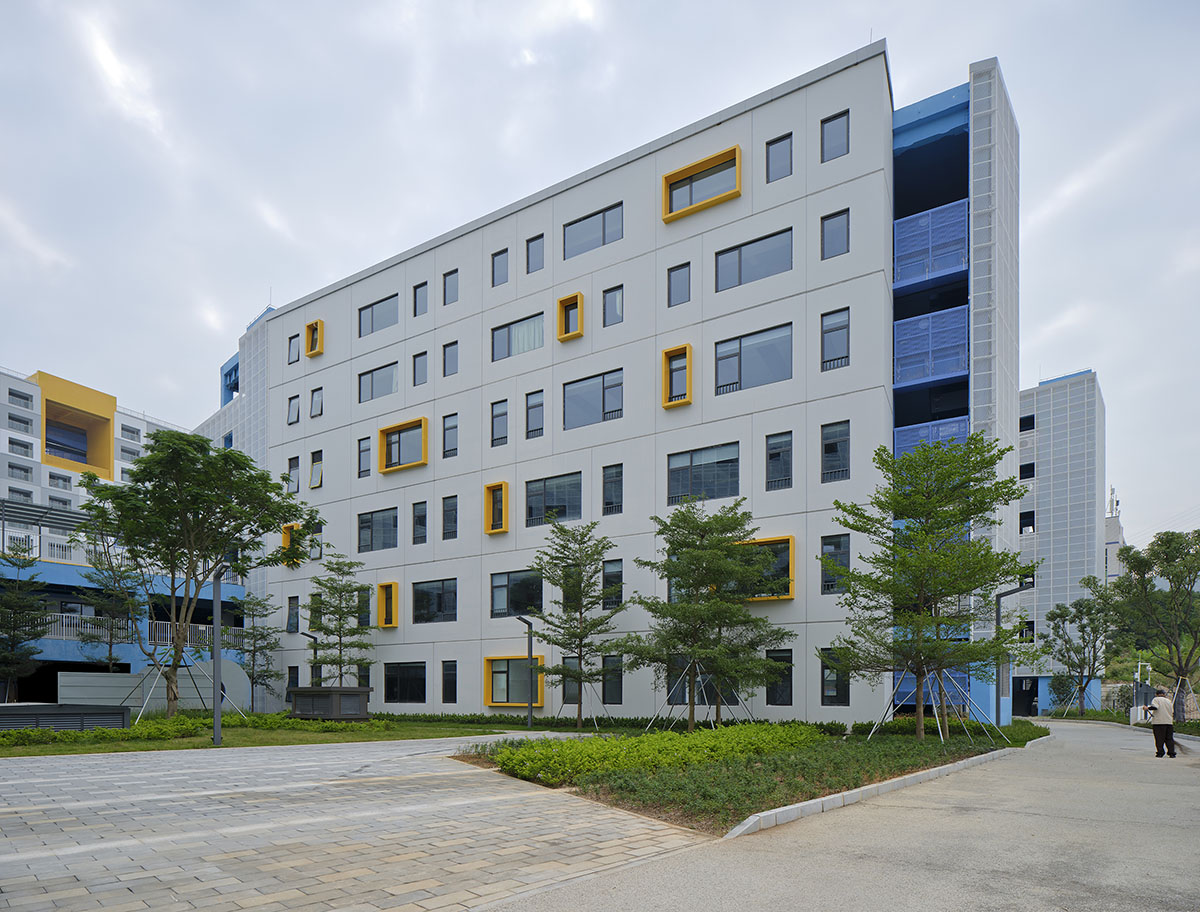 "We aimed to break the rigid repetition of the same paneling, and to incorporate visually appealing highlights for the campus. We saw the potential to create a subtle, but rhythmic rise and fall of elements, to work against the otherwise totally flat façade surface of the dormitory building for example," said Binke Lenhardt, Crossboundaries’ Partner and Co-Founder.

"We achieved this in making use of available window opening panels, in different panel thicknesses, and through color accents of course. Using predominantly prefab doesn't necessarily mean having to be dull!," explained Lenhardt. The middle wing of the three teaching buildings was twisted a little, thus making the open spaces between buildings a bit more irregular and more unique, the shape of yards in between them are now defined as intriguing polygons, instead of being just simply square shaped. For the dormitory building - highly visible from afar and facing Jinlong Boulevard, one of the main access streets to the school - the architects composed the façade out of prefab panels in different thicknesses and different color hues.

The most protruding ones are the brightest, the most set back ones the darkest. Evenly distributed openings function as balconies with a setback façade for the dormitory rooms behind them and allow for more depth in the overall appearance of the surface. 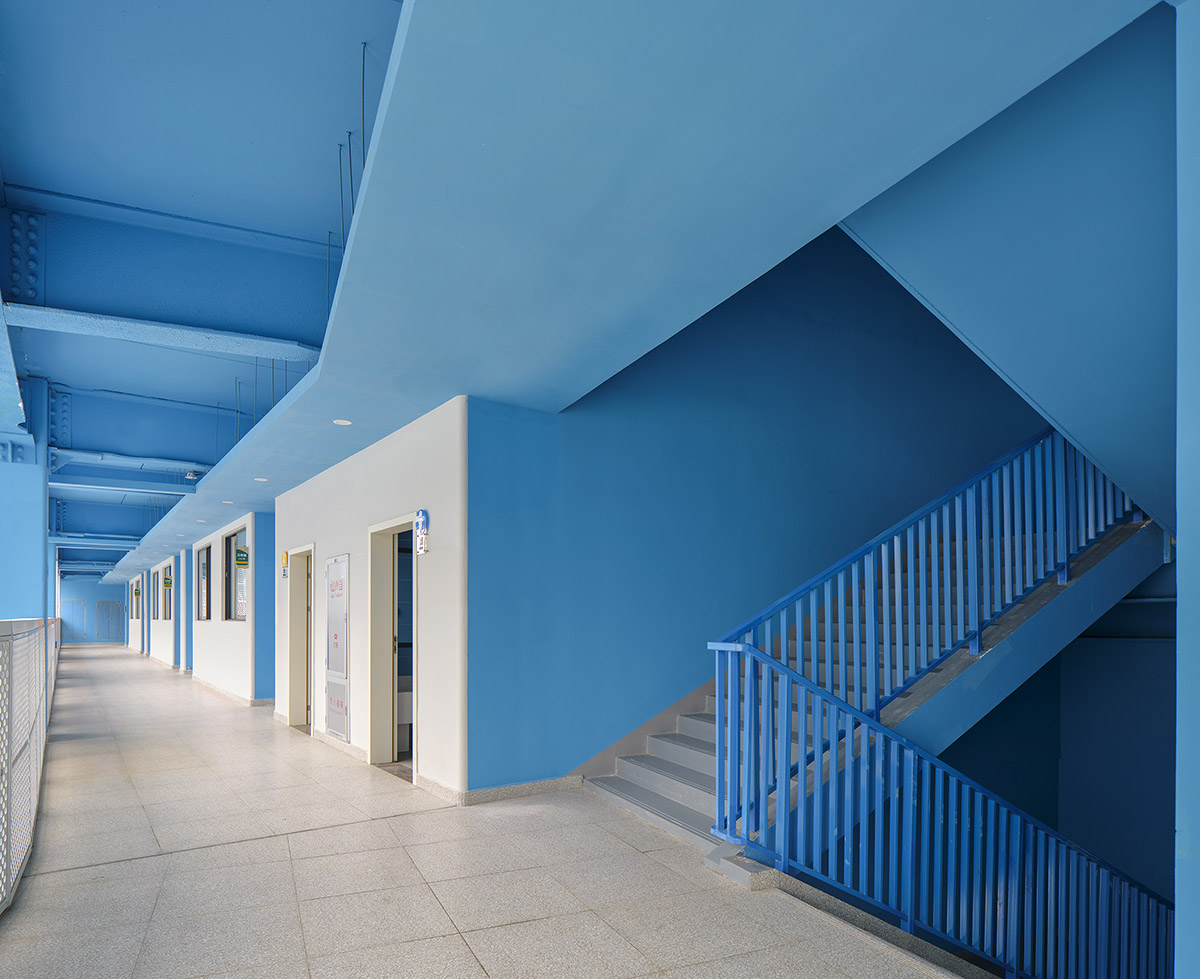 Clever Interventions in a high-density space

With a construction area of more than 50,000 square meters and a site area of only around 16,000 square meters, the plot ratio of the Jinlong project is almost 2.5, representing a quite high index for a school.

Due to the high density of the project, coupled with the extremely tight deadline and the demand to accommodate a manifold of functions, it was essential to design the public spaces following practical and at the same time clever considerations, trying to avoid repetitiveness and a sense of oppression as well as to set aside space for future educational innovation.

Because of the small site area and the high demand of functions, some areas of this school are elevated to arrange more public and common spaces on the lower levels. In conventional campus layouts the sports field is pushed to the peripheral area, disconnecting it from the learning spaces.

The Jinlong campus positioned the running track in the middle of the campus between the residential and educational zones and is lifted up on a platform to allow for other sport areas, art, library and multifunctional spaces below. At the same time the sports field with its recreational qualities is in closer distance to the higher classroom floors, optimizing circulation. 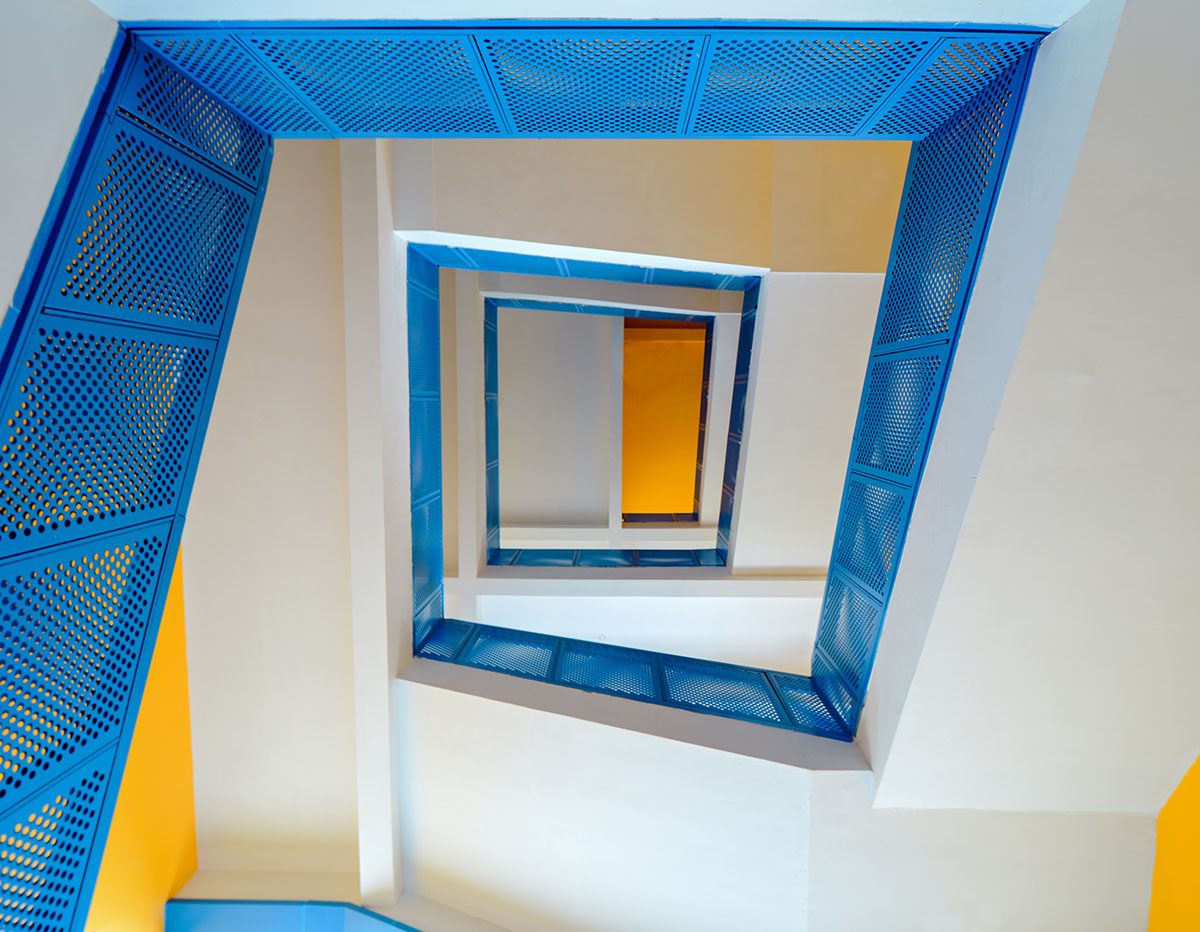 The lower level becomes the cross-connection for the campus, a public corridor that runs through the whole length of the site, linking the educational and residential quarters, while on the site's wide stretch bringing together the entrance zone on one side with the adjacent future neighborhood on the other.

Corridors connect the teaching buildings on different levels to each other and also to adjacent areas of the adjoining, elevated sports fields. They form a larger scoped network, facilitating pedestrian's free movement and student's active interaction out of different classrooms. 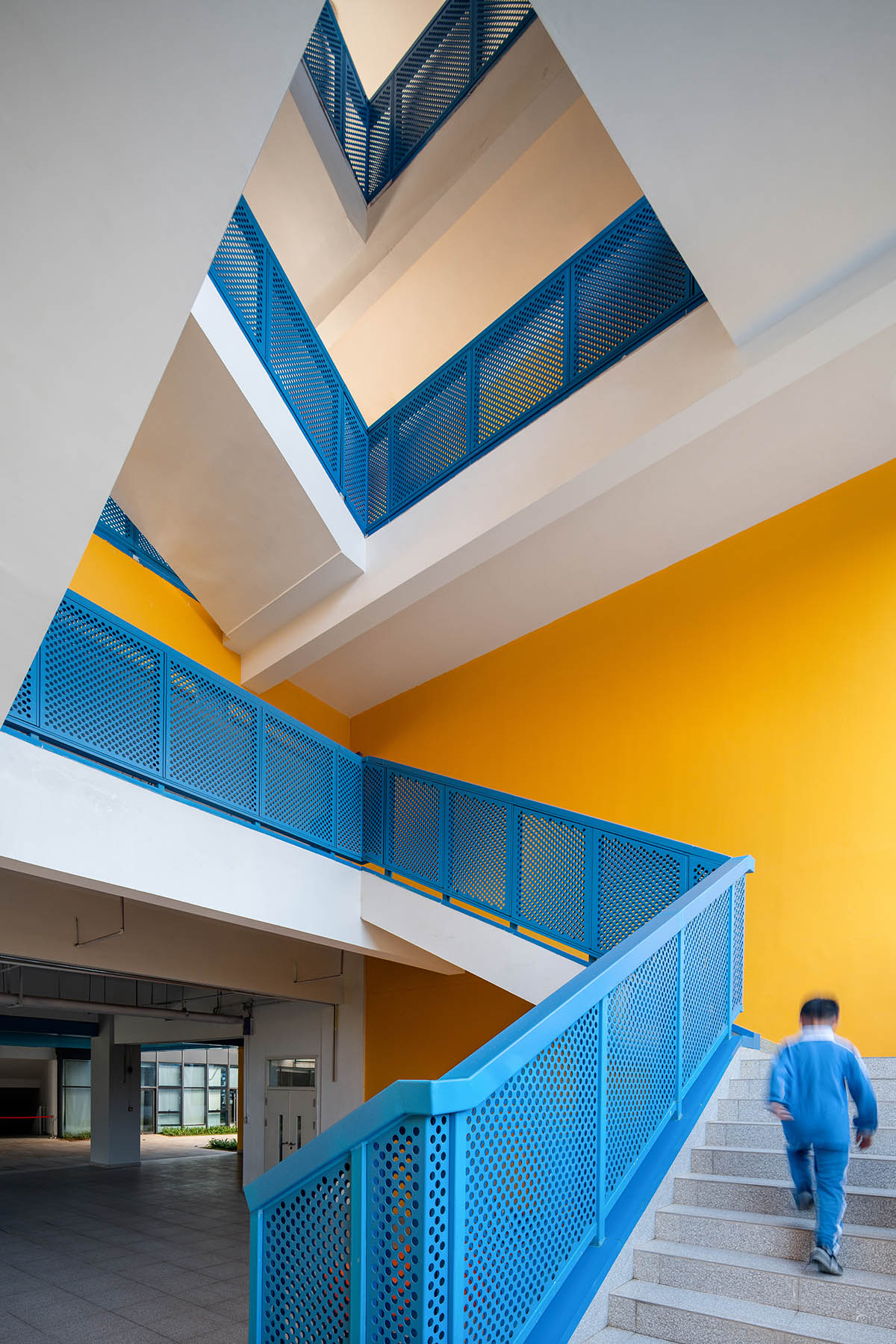 In the dormitory building, incorporated at different heights and emphasized in yellow, are multiple large-scale public spaces, to provide communication and meeting spaces for the dormitory's residents. They break the crowded and uniform feeling, the density evoked by the repetitiveness of the large number of residential units.

The school campus' design also takes into account the local, subtropical climate in Shenzhen. A lot of the school complex's public areas remain open and were not closed off like the classrooms, labs or other special areas. In addition, in order to allow for optimal air circulation, light facades composed out of perforated metal panels were applied to the teaching buildings, which - apart from their functional benefit - giving it additional visional qualities, revealing colors and movements behind. 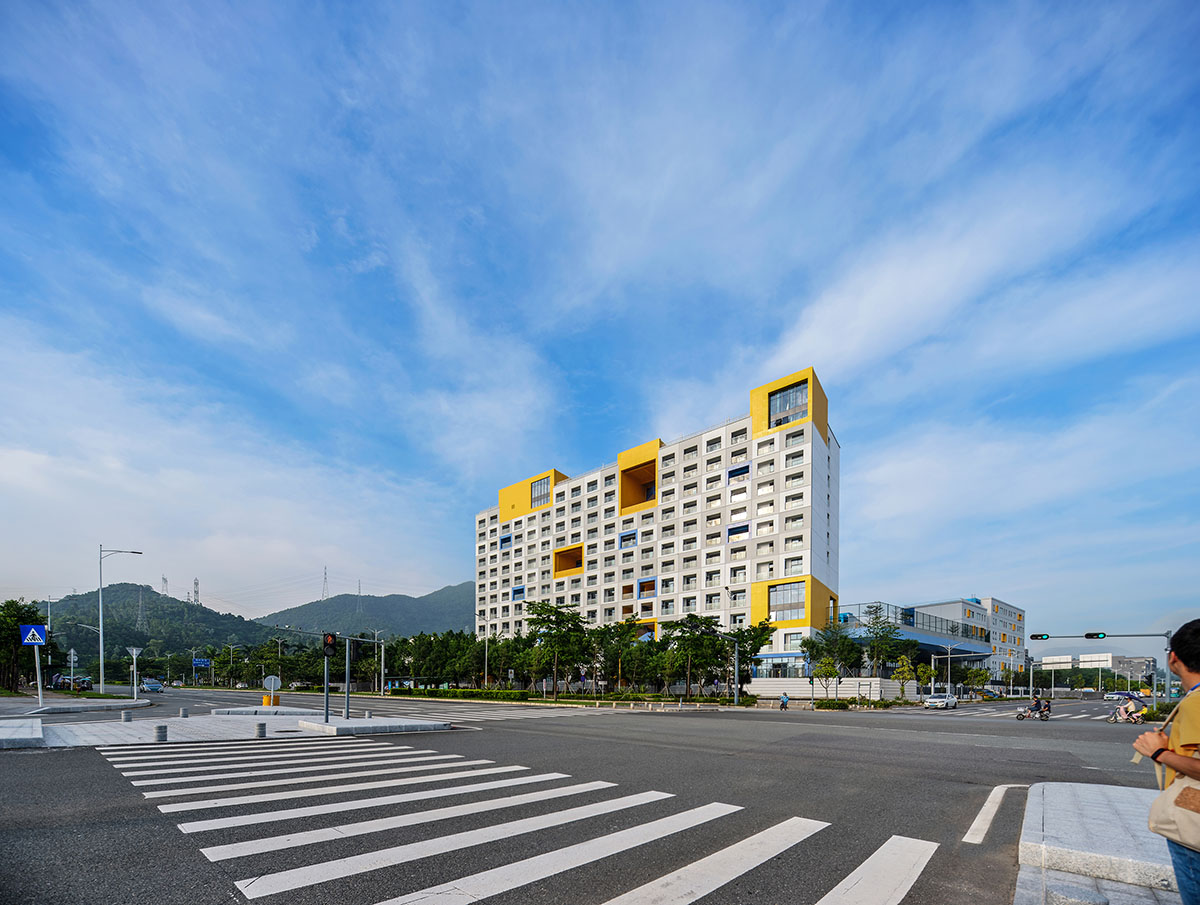 A creative, human response to the limitations of public-school development

It was not the first time, that Crossboundaries designed a public school, with budget and land use limitations. Actually, these public projects are more common than school projects backed by abundant

budgets. As mainstream educational institutions, public schools serve the majority of families in a society and therefore reach a much broader group of students. The design, together with the educational philosophy are targeted to a much larger audience and have potentially far more impact on future education - which made it such an intriguing project. Crossboundaries responded to the challenge, to an imminent, realistic problem of the school shortage due to expected enrollment numbers. Space and budget limitations, the obligatory use of prefab components led the architect to deal in a most creative way with possible variations and modular explorations within the (at first glance) rigid given parameters.

Crossboundaries delivered with the Jinlong Prefab Primary School not only a human space for education and with substantial social impact, a hub for communication and interaction - but also a future vision on how to deal with similar projects in tomorrow's quickly expanding mega cities. 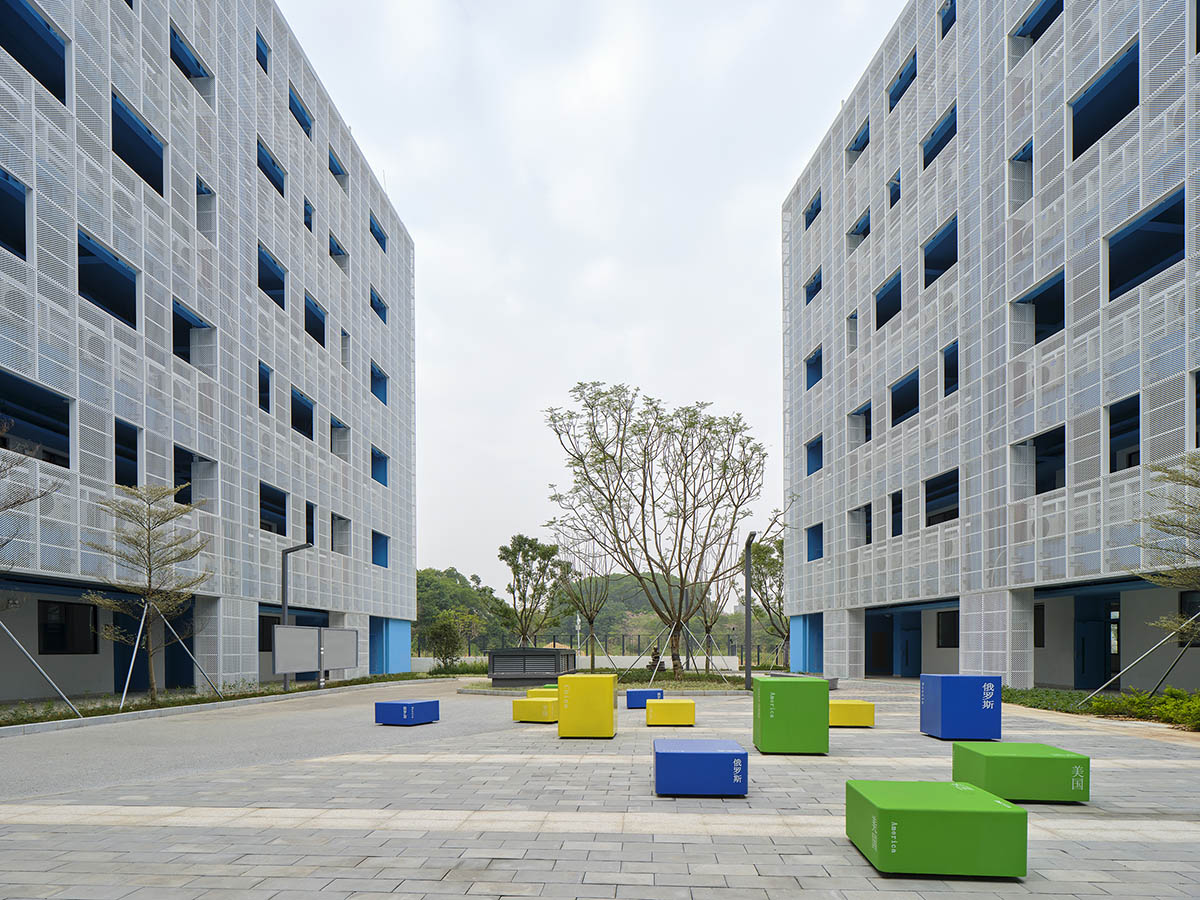 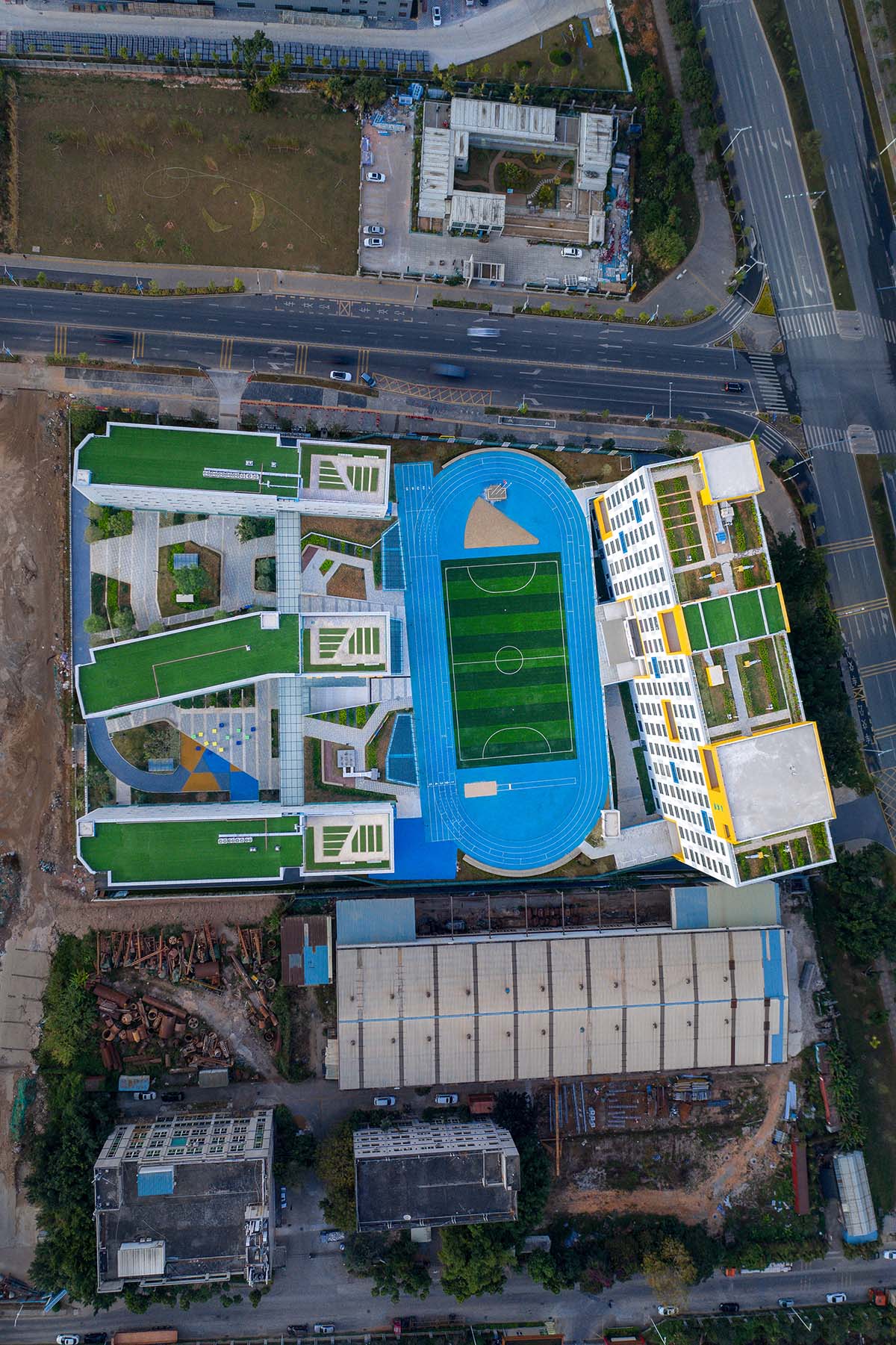 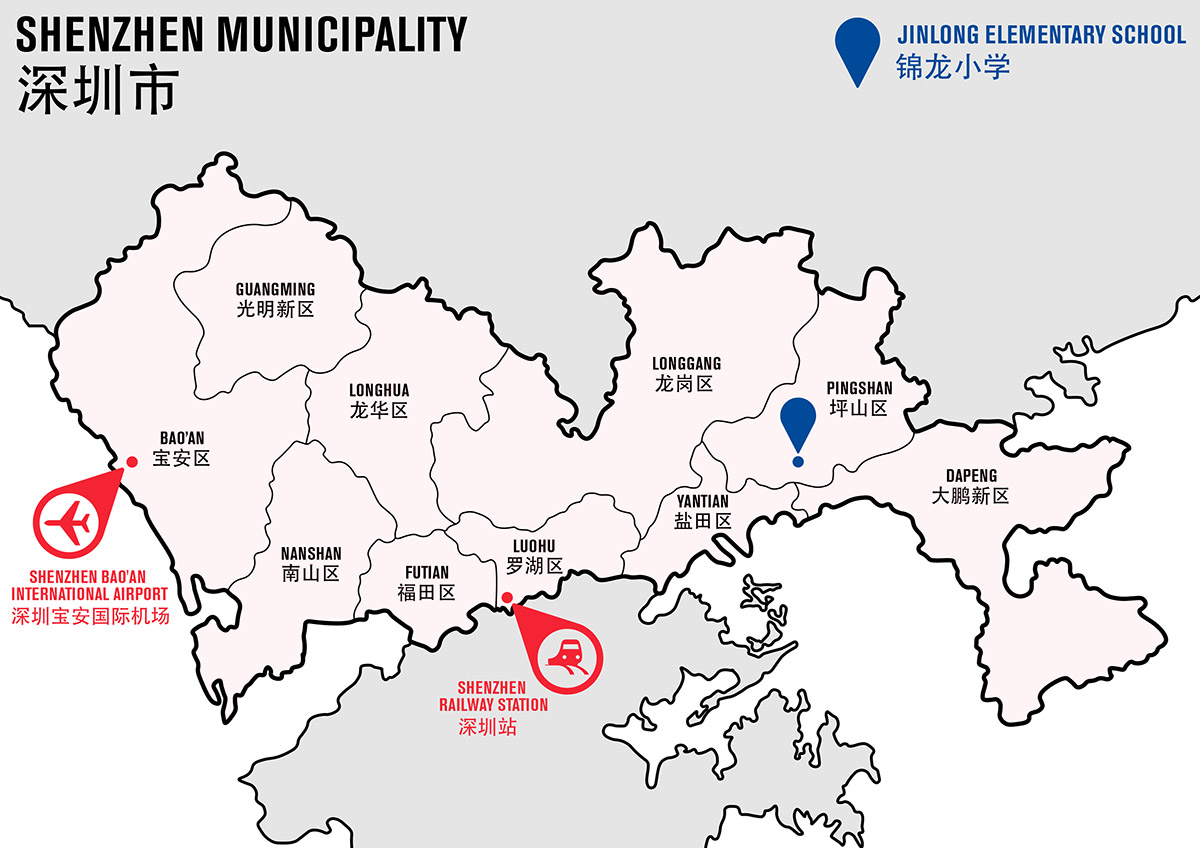 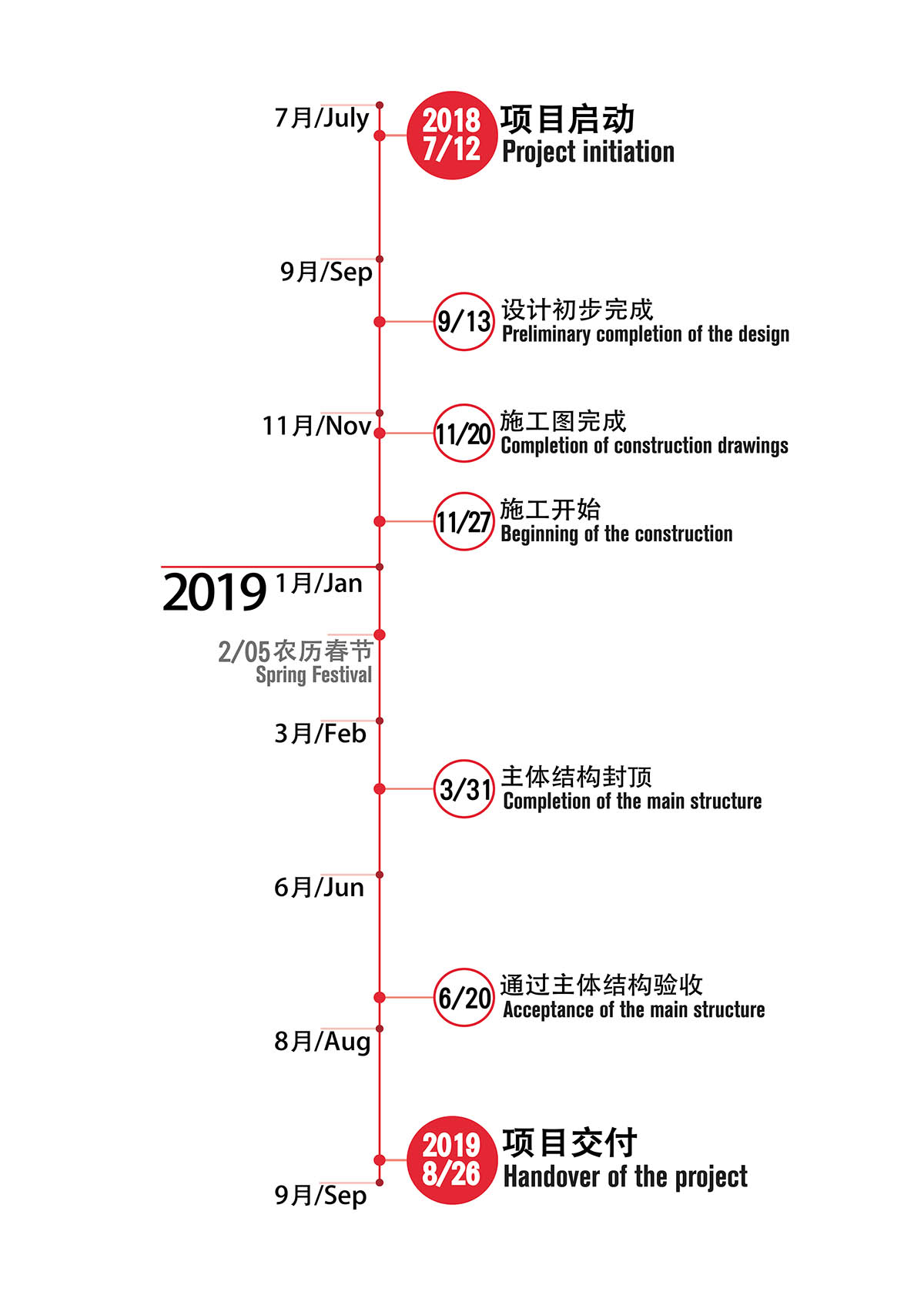 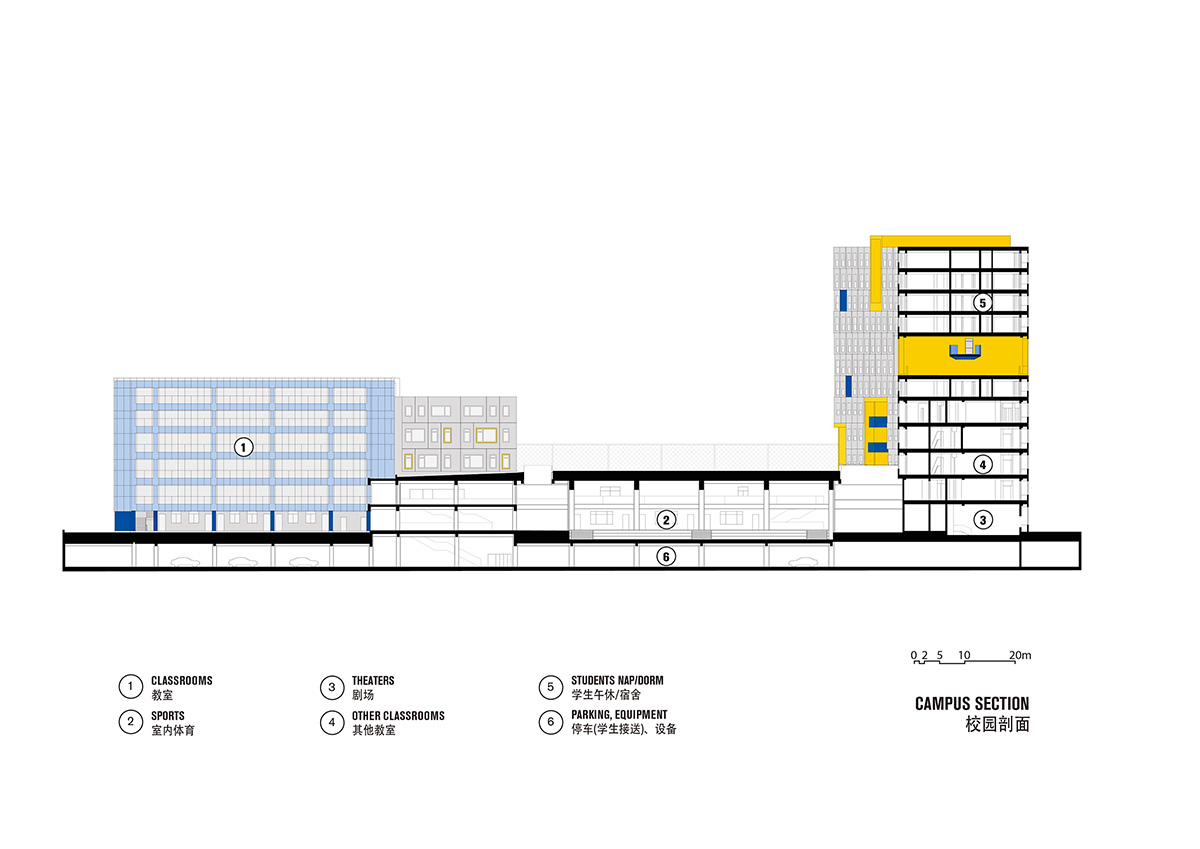