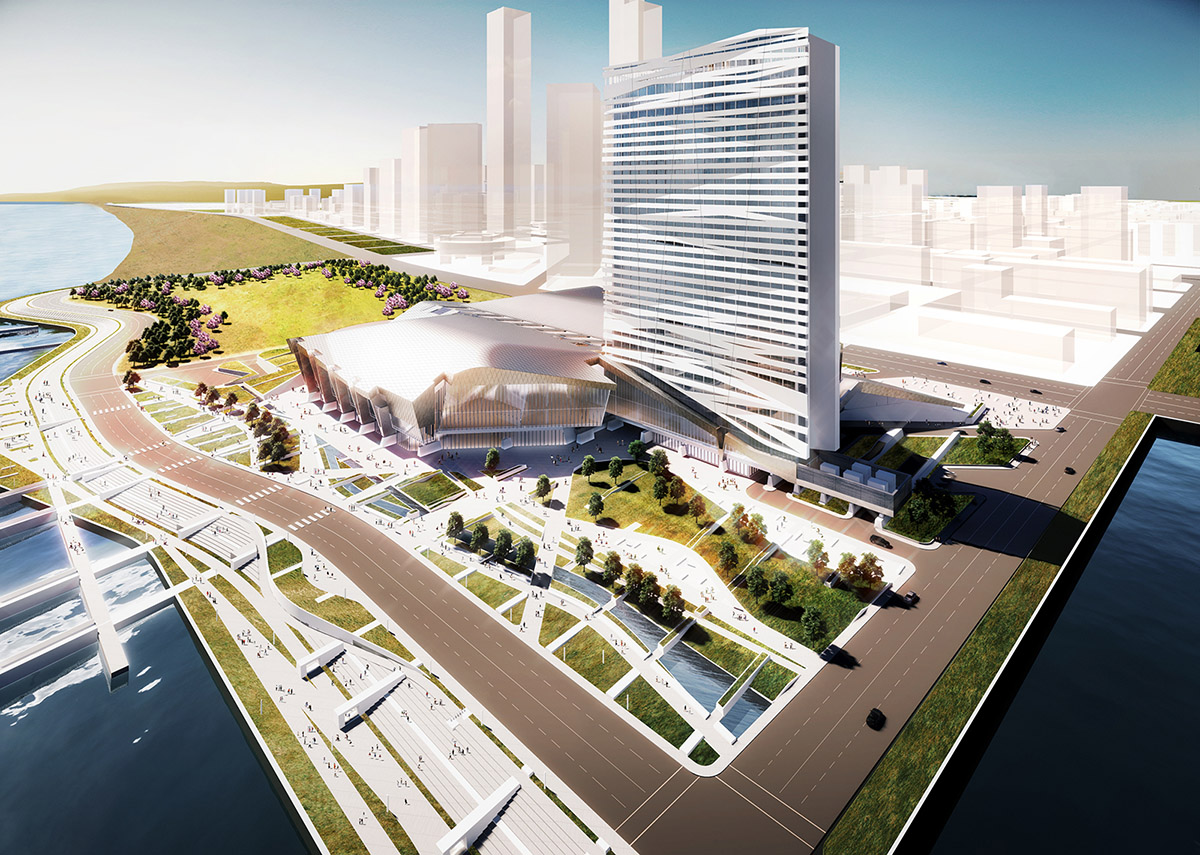 Set to be built at a key position between China’s eastern coastal cities and the Yangtze River Delta region, the Nanjing New Jiangbei District is emerging as a China’s newest epicenter for global business. 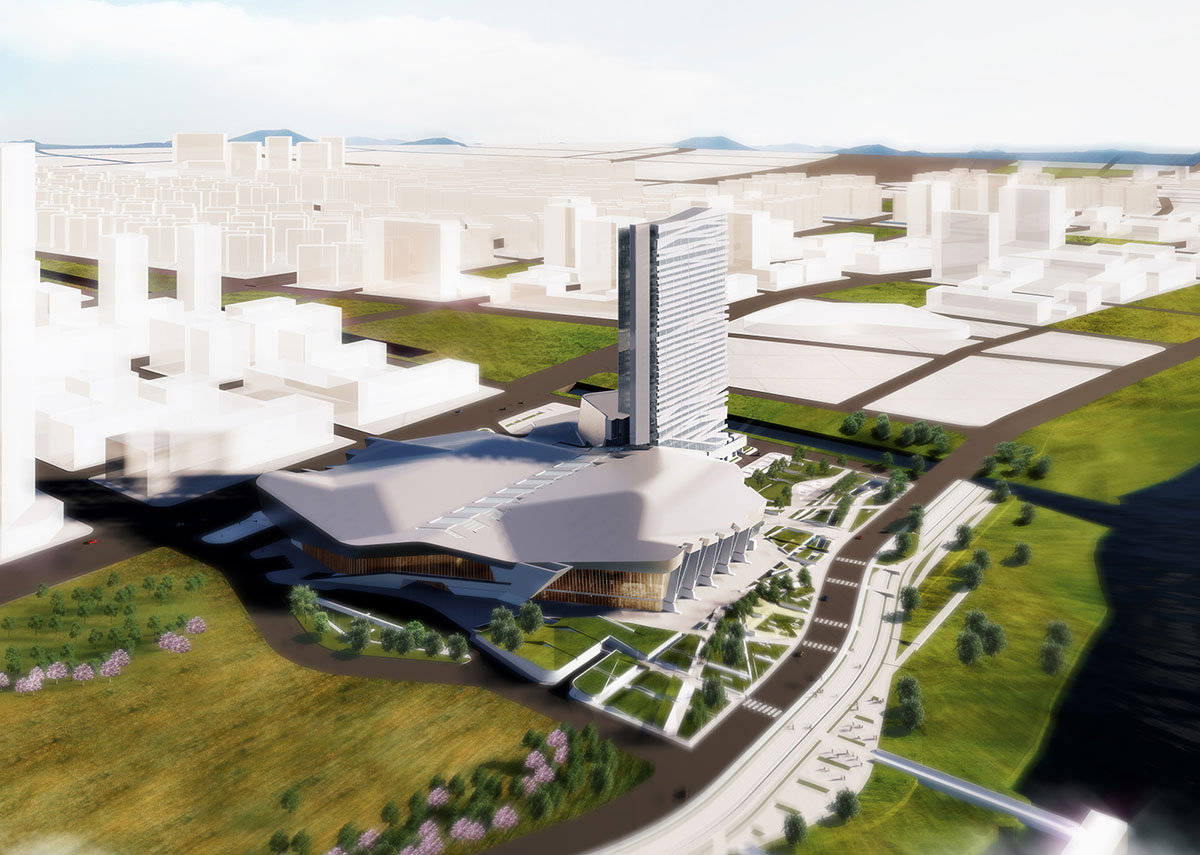 So the Nanjing Conference Center represents a flagship project for the new district, commissioned by the city of Nanjing to embody a charter for sustainable and ecologically-sensitive development while creating a world-class meeting and event venue for the region, as the architects highlight.

The new building sits at a unique geographical and cultural junction in Nanjing, bordering the banks of the Yangtze River, the burgeoning commercial edge of the Jianbei District, and the historic fabric of the Nanjing Metropolitan area. 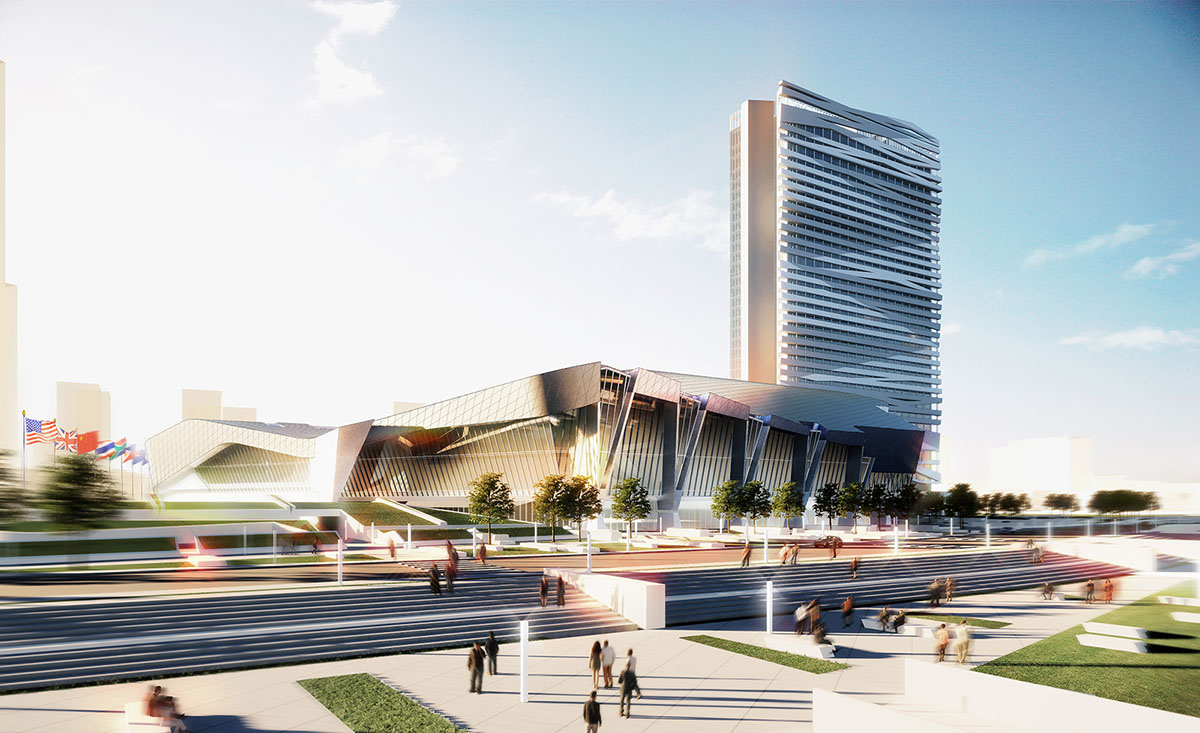 "The design negotiates and responds to this condition through architectural form, landscape elements, and circulation," said Morphosis Architects.

The complex mainly comprises a hotel tower, accommodating 375 rooms - a 4-star hotel, and its rooms are oriented to face the river. The other low-rise building, functioning as a podium, includes a program of the convention center which is organized systematically by cladded box trusses and define a flexible series of conference spaces flanking a central 200-meter arcade that bisects the building into a north and south wing. 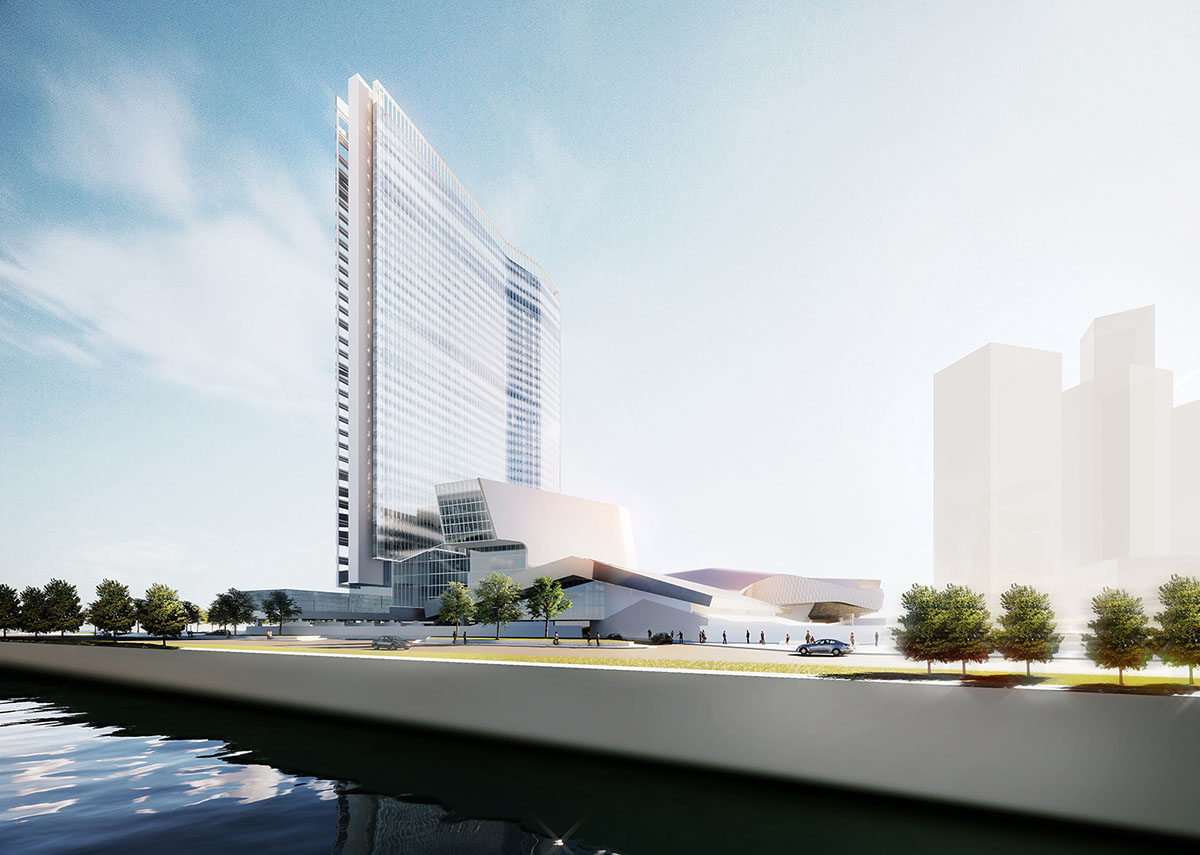 "This arcade serves as the primary circulation spine for the building, intersected by short, perpendicular bridges providing access from VIP entrances and the hotel tower," said Morphosis Architects.

"Bringing visitors to the arcade, the convention center’s grand, formal entrance and atrium is illuminated by a massive skylight, which frames views upwards to the hotel tower."

"This blurring of interiority and exteriority is further emphasized by drawing the metallic façade of the hotel tower back into the building to form a dramatic atrium liner," the firm added.

As the studio explains, the tension of the site’s boundary condition, between the river and the city, shape the conference center’s urban expression and surrounding public spaces. On the city side, the hotel tower’s façade uses a fully-unitized aluminum frame that holds a series of frit glass panels. 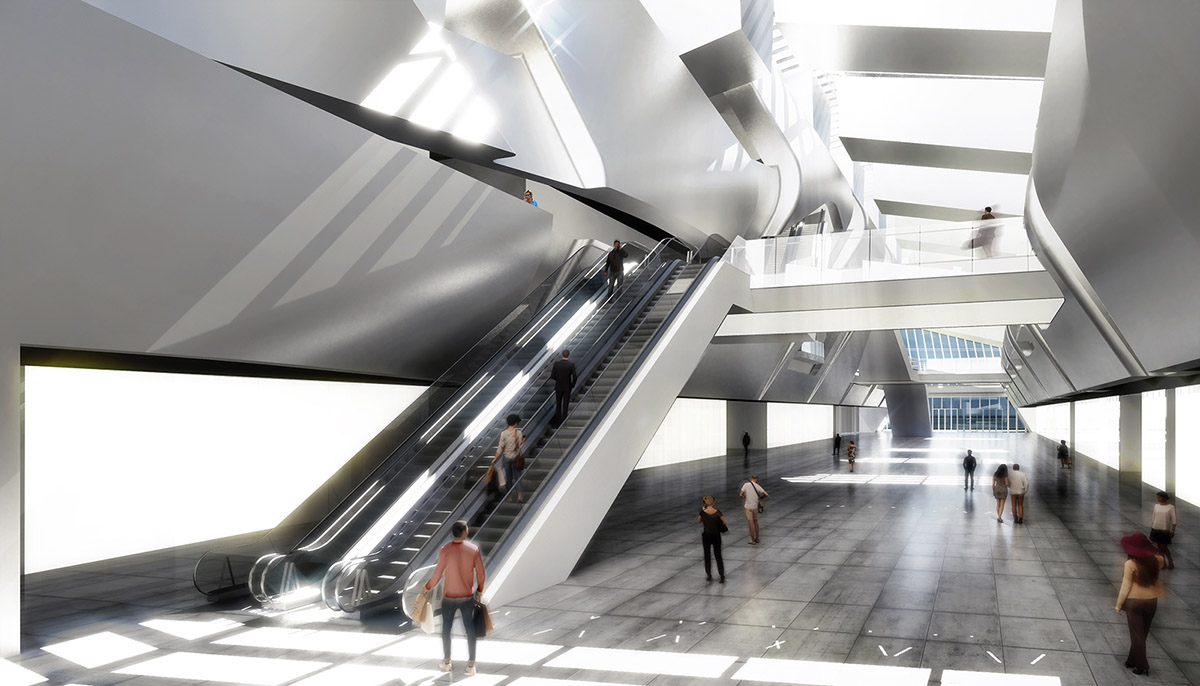 Coupled with a range of performative benefits, the frit gives the exterior a unique, blurred effect that reflects the city context. On the river side, the sinuous quality of the landscape and façade mirror the organic nature of the river’s edge. 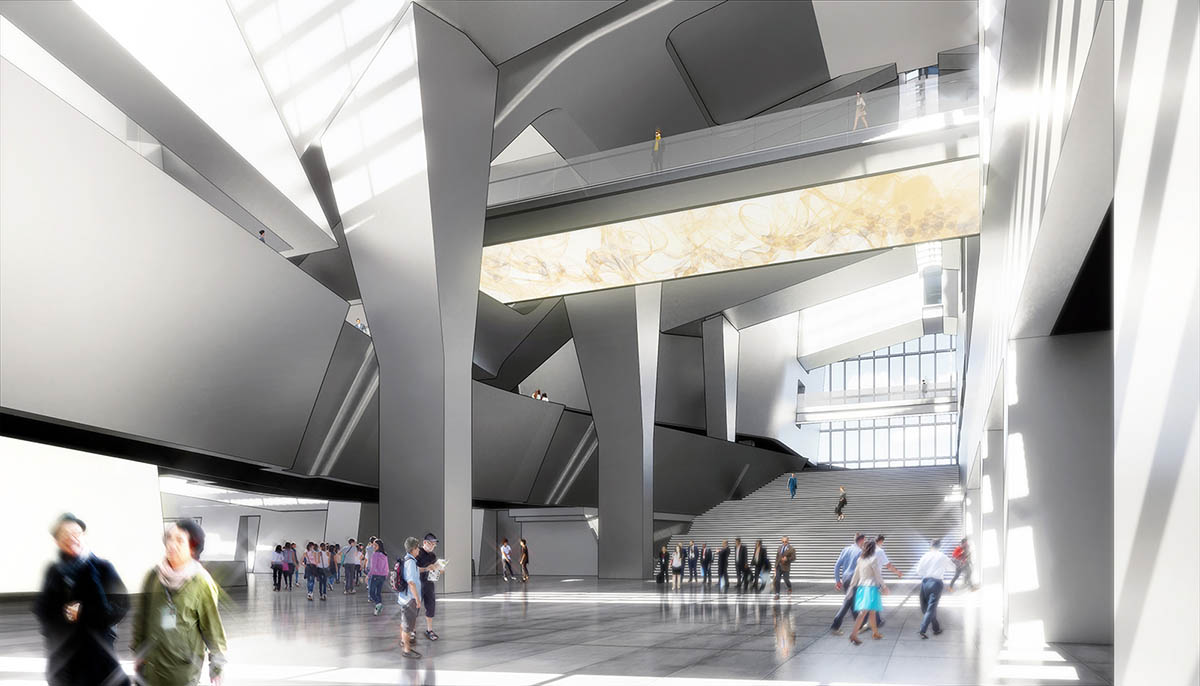 A series of terraces negotiate the slope down from the building to the river piers, which are linked with the rhythm of the conference center’s structural bays by fluid paths and landscape elements. 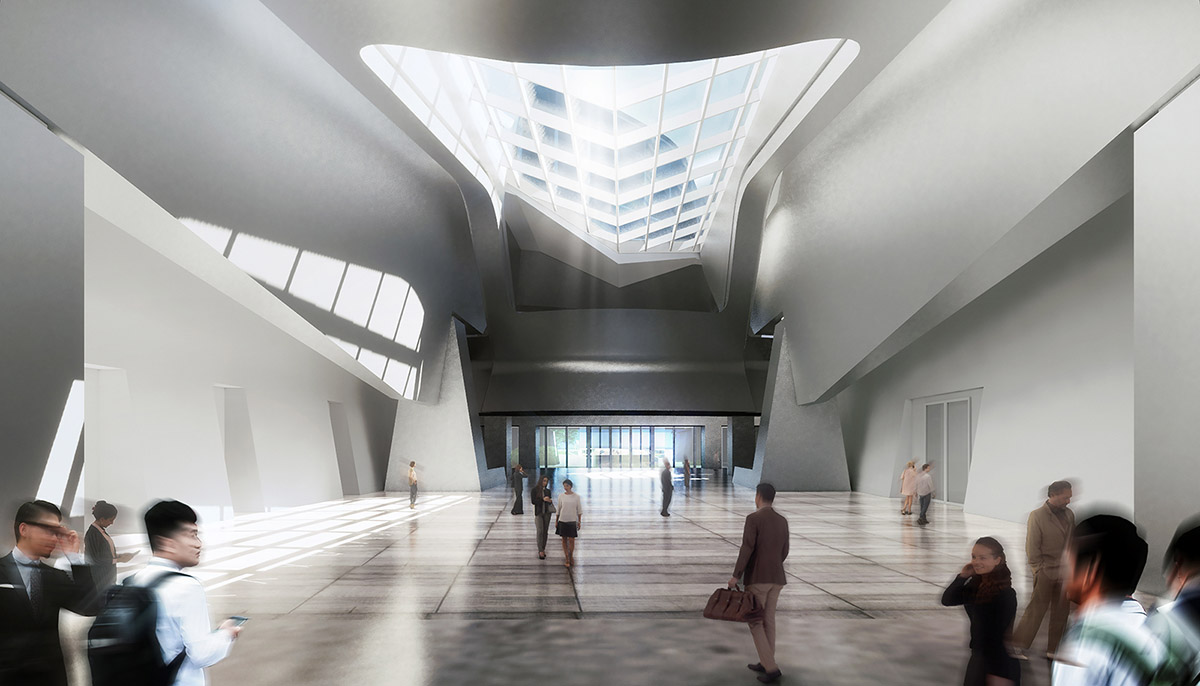 Above, the river-facing south façade features a rippling metal and glass brise-soleil comprised of over 90,000 distinct metallic panels. The brise-soleil reduces heat gain and contributes to the energy-efficiency of the building, which is designed to achieve a 3-Star rating, the highest sustainable design grade recognized by China’s national green building standard. 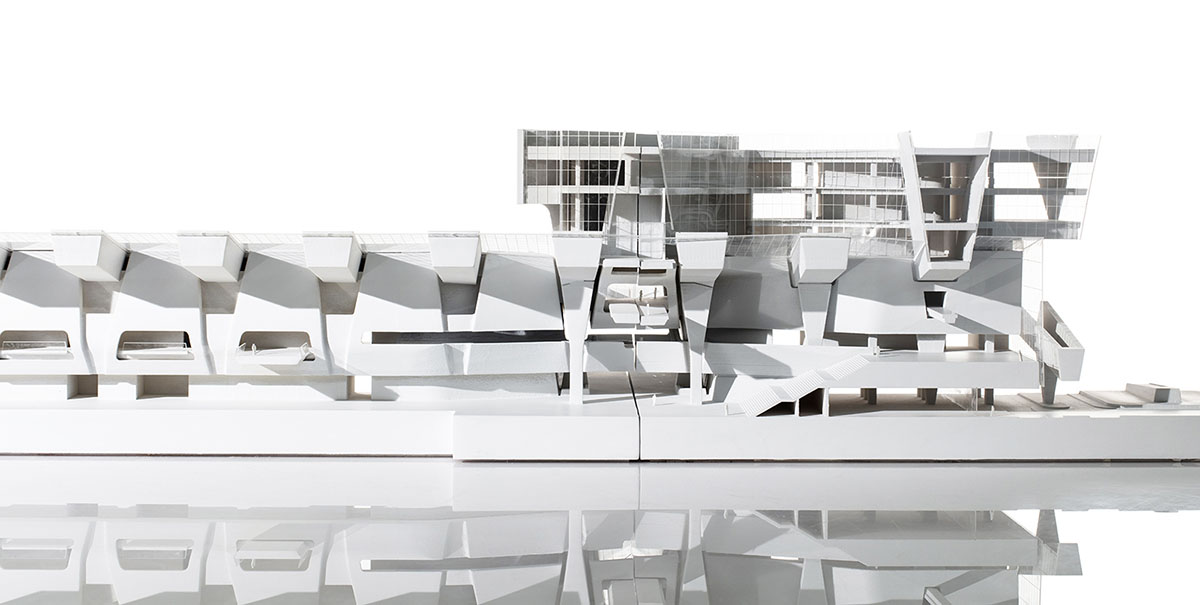 Construction is scheduled to complete in 2021.

Morphosis Architects was founded by Thom Mayne in 1972 in Los Angeles and New York City as an interdisciplinary practice involved in rigorous design and research that yields innovative, iconic buildings and urban environments.

The firm today consists of a group of more than 60 professionals, who remain committed to the practice of architecture as a collaborative enterprise.

All images courtesy of Morphosis Architects