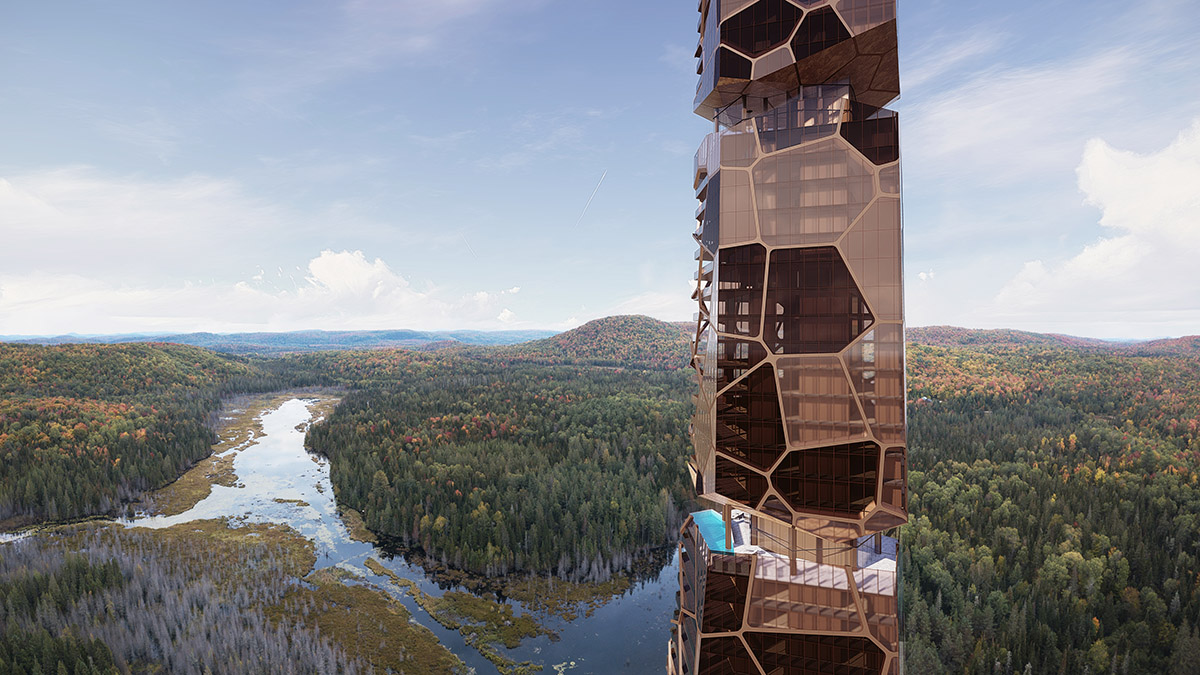 Quebec-based architecture practice MU Architecture has unveiled design fo a residential tower in a vast forest of Quebec, taking cues from its natural surrounding and trying to connect a new relationship between humans and their natural habitat with its peculiar form.

Called Pekuliari, the 48-story tower aims to redefine the way of inhabiting and occupying one territory, the project announces a new relationship between humans and their natural habitat. 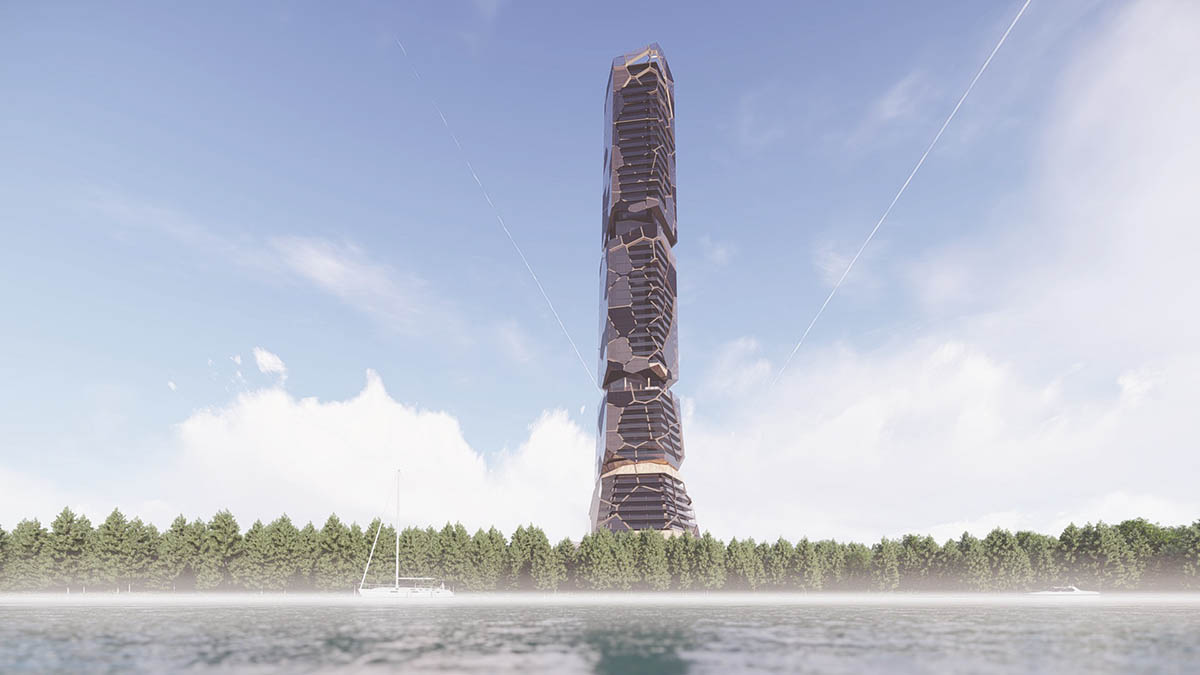 Diametrically opposed with the concept of urban sprawl, this impressive tower that stands in the heart of the vast forest of Quebec greatly diminishes its impact on nature and the destruction of more and more rural land. Straight out of the imagination, this iconic and enigmatic structure asserts itself as a world's first. 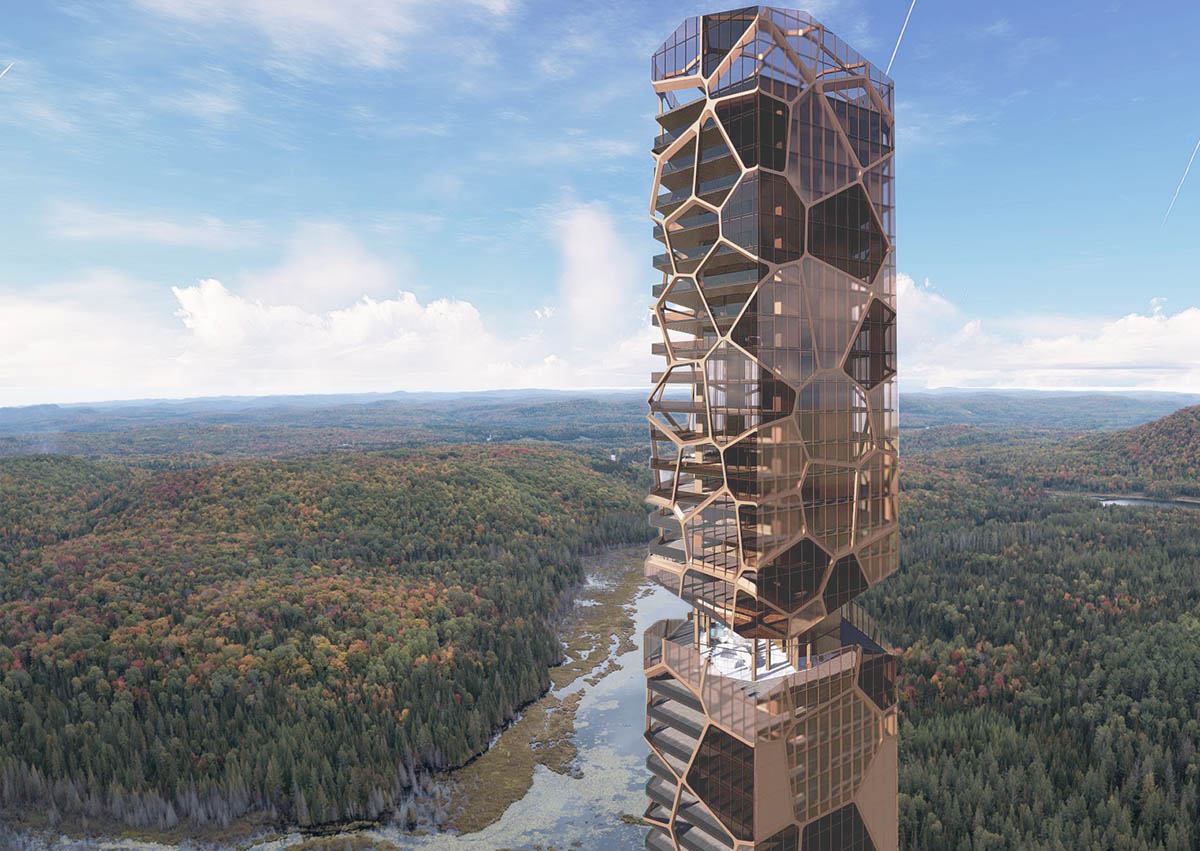 Described as "paleo-futuristic tower", this improbable and amazing vision of this tower seems to emerge from the ground. Unique in its kind, this tower culminates more than 200 meters high in this hilly Quebec landscape. 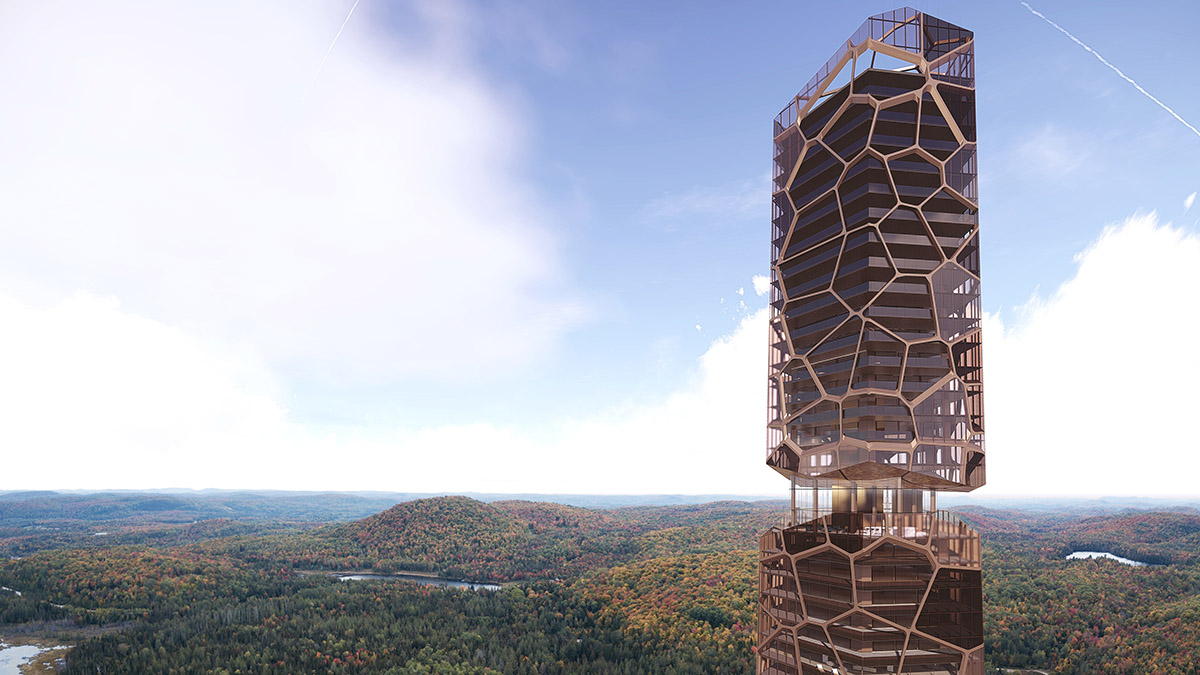 "Evoking a totem or a stone cairn in Quebec territory, Pekuliari is an eloquent example of paleo-futurism. Resembling a lithic structure from immemorial times, the materials and the refinement of its details make it a building of a still distant future," said MU Architecture.

"Its familiar appearance of large stacked rocks eroded by, is complemented by a skin that has an appearance taht recalls the mineral and vegetal character of its surrounding nature."

"This irregularly shaped exoskeleton structure gives the envelop an organic and cellular aspect that contrasts with the crystalline glass façade underneath," the studio added. 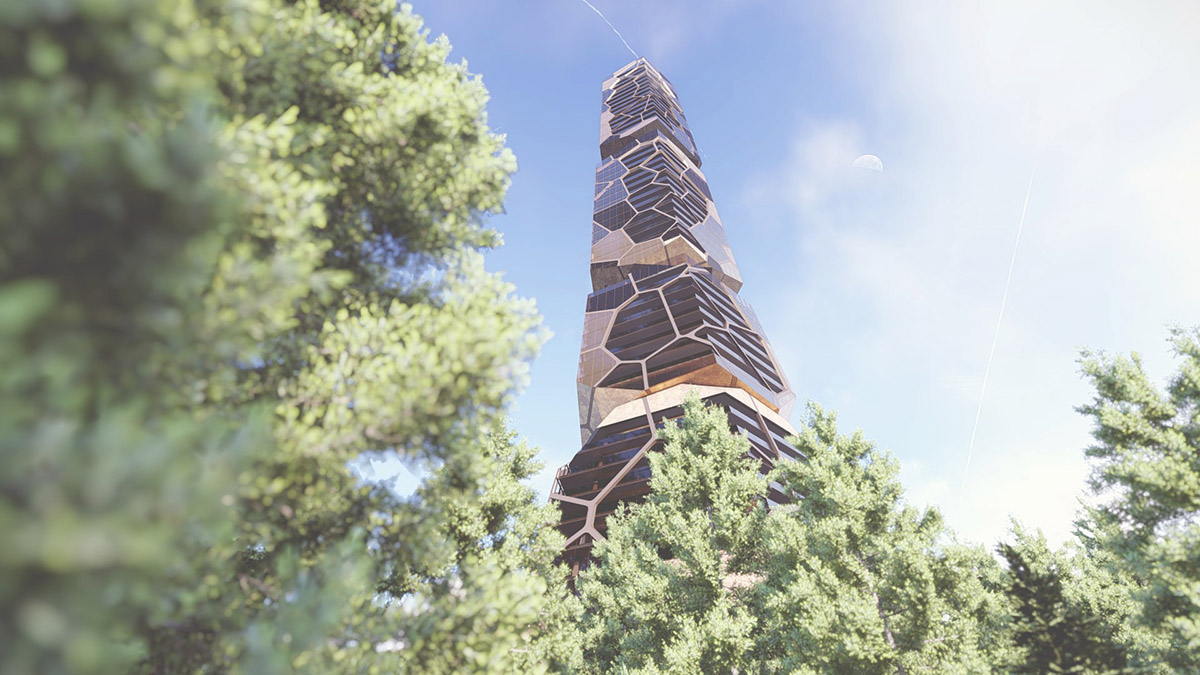 The tower is composed with multiple toned glass panels, the façade shimmers under the sun. Designed with the latest parametric architecture technologies, this envelope gives the 48-story tower an out of the ordinary sculptural look. 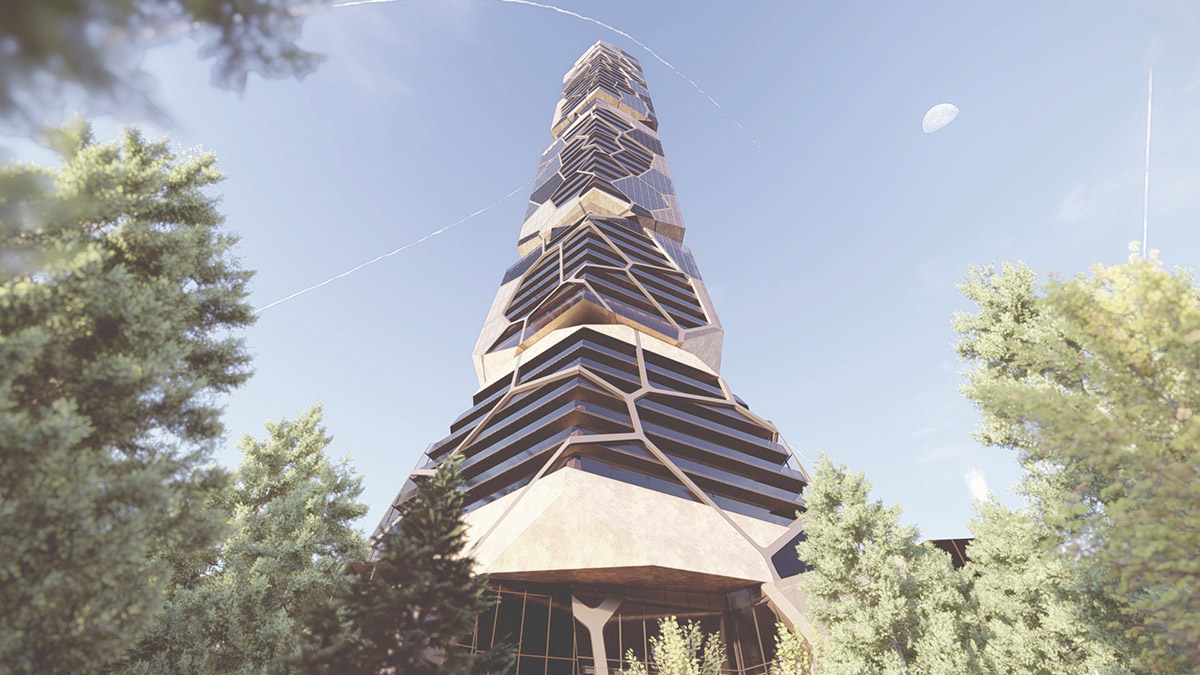 As guests enter the reserve, an angular and architectural building welcome visitors. Combining security access gateway and hangar for private helicopters, this structure supports a large greenhouse that supplies the compound with fresh daily food products. The surplus produced are redistributed to the community and charities of the region. 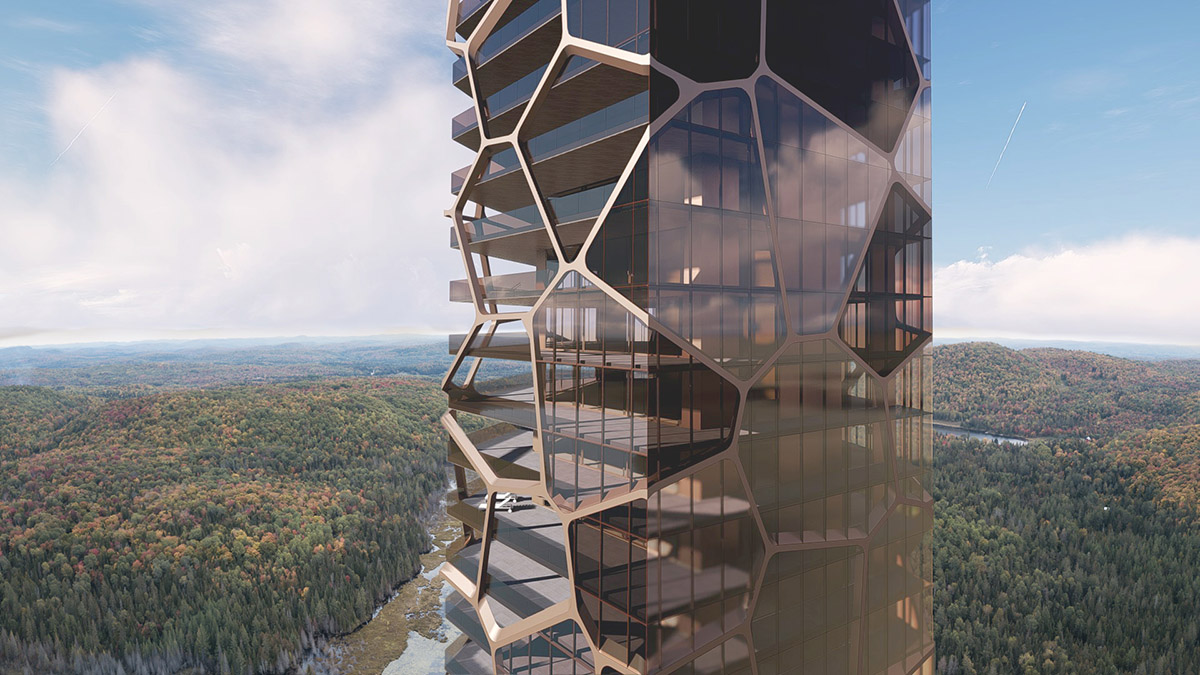 "This development does not repel nature, it embodies it. By limiting roads to a minimum and prohibiting hunting, the Laurentian wildlife found a sanctuary in Pekuliari," explained the studio.

"Beyond protection, this project goes even further with reinsertion programs for several species including the mallard duck and some species of bats. These wildlife programs, run by biologists and academics, make the Pekuliari, reserve a place not claimed by man." 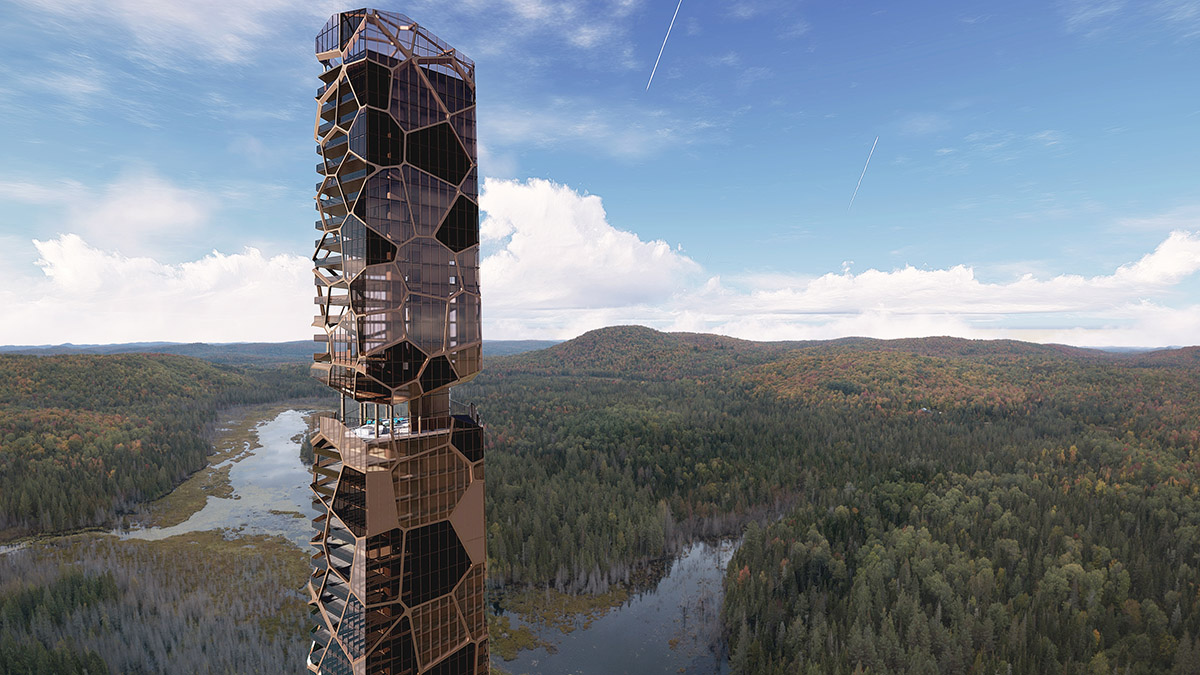 The tower comprises of 50 luxury units, a vast majority of which are spread over complete floors, varying between 4000 (372 square meters) and 8000 sq.ft. (743 square meters) each.

Developed in the standards of high-end architecture and interior design, they offer 4 to 5 full suites, 2 fireplaces, 2 lounges, custom cellars and huge balconies surrounding each floor over 180 degrees. For the first time, it is possible to wake up in nature on the 48th floor, in all the splendor of an ocean of infinite forest. 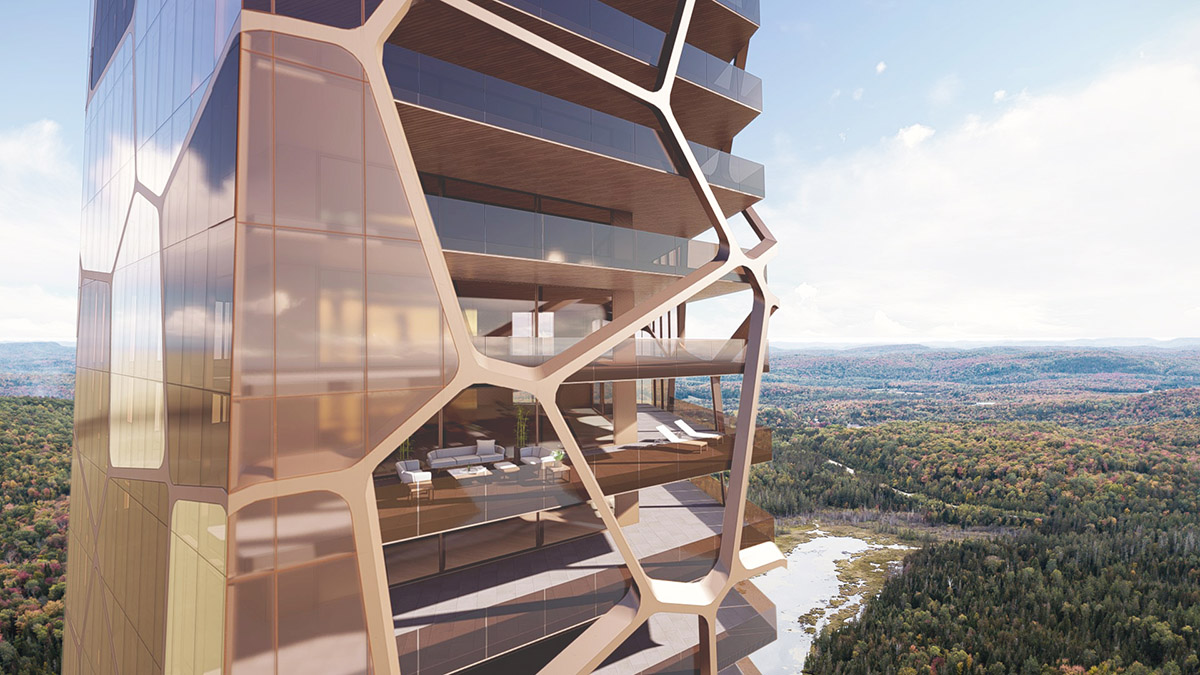 Beyond the incredible quality of life and prestige, the tower pushes the limits of innovation in the integration of new building technologies. In addition to rainwater and snow collection, greywaters will be filtered and released into the environment through natural and ecological processes.

Windmill systems and photovoltaic glazing will ensure self-sufficiency. Although far from urban centers, the project takes shape as a highly secure and private retreat. 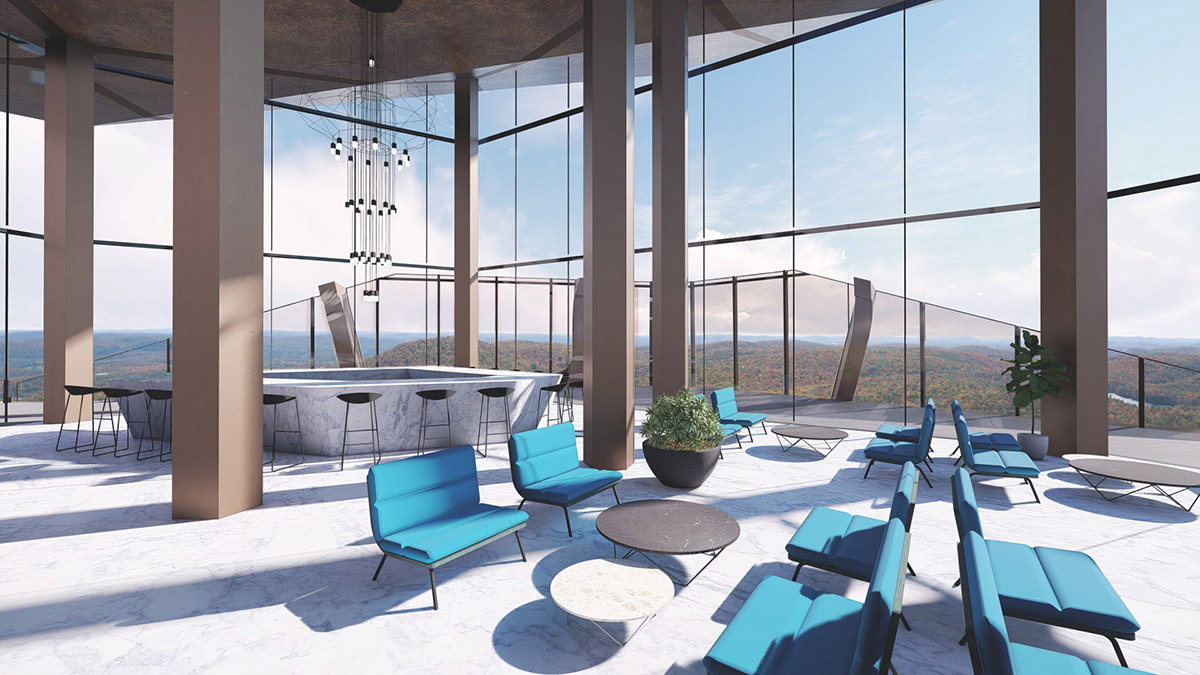 Unique in the world, this visionary and ambitious architecture project introduces harmonious osmosis between the human habitat and the natural habitat. 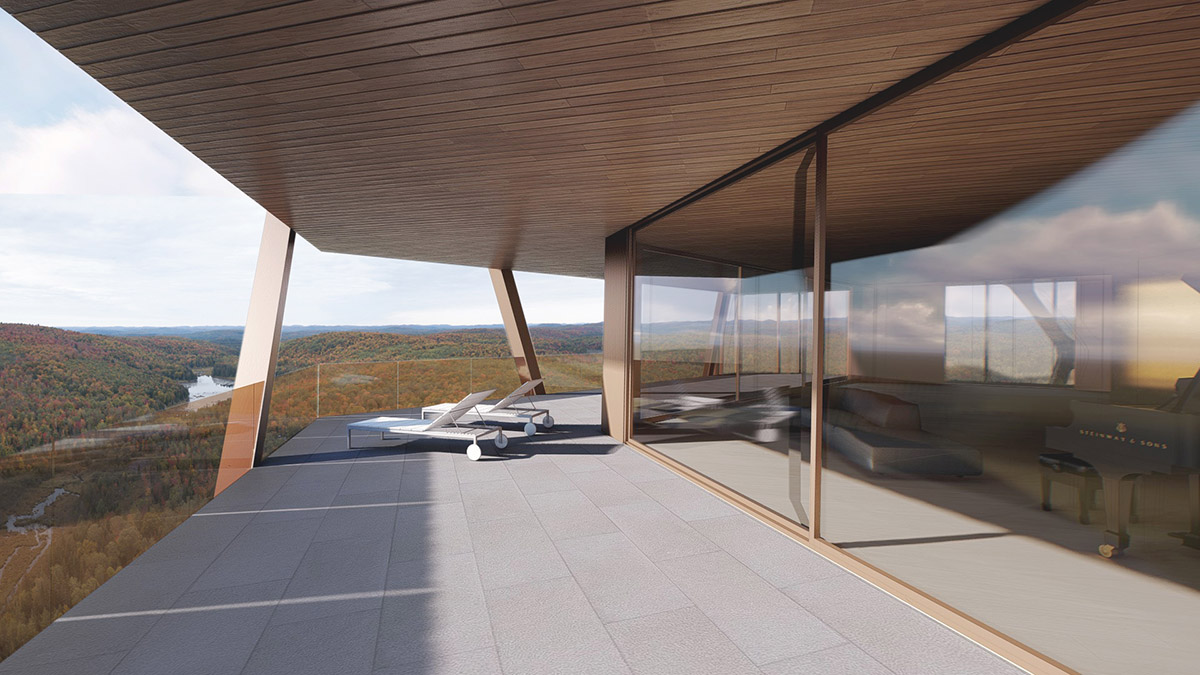 "Addressing a clientele eager to reconnect with nature and rejuvenate in peace, this world-class project offers an unparalleled exotic experience," said the firm.

"The tower will make a significant contribution to the prestige of the region, generate a strong impact on the local economy and shine at an international level." 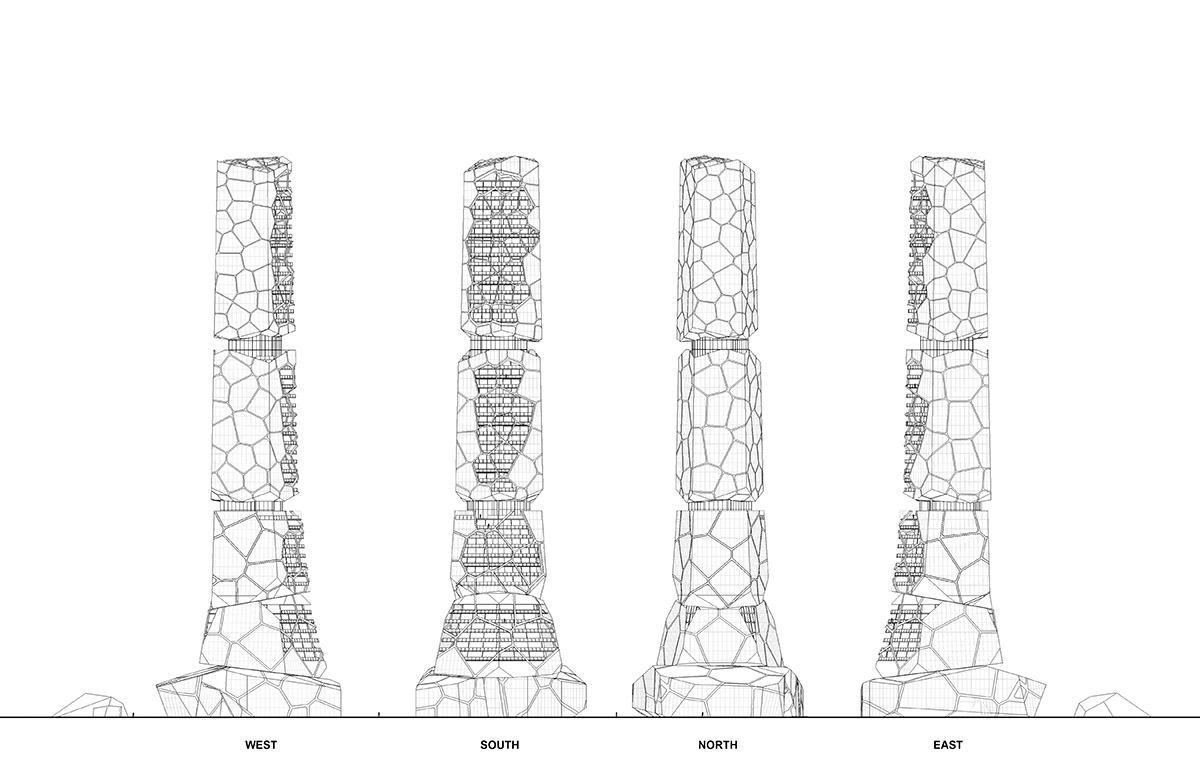 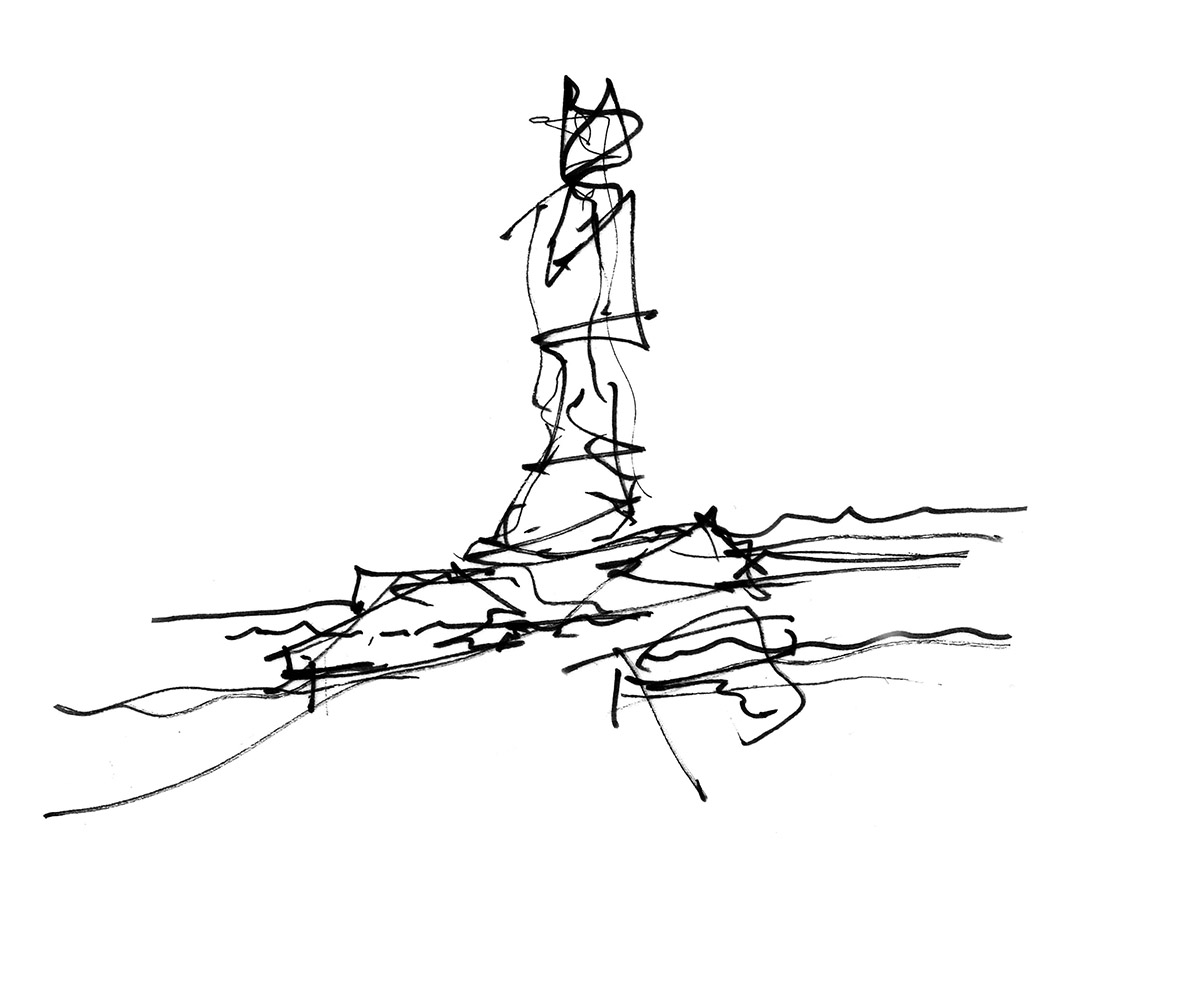 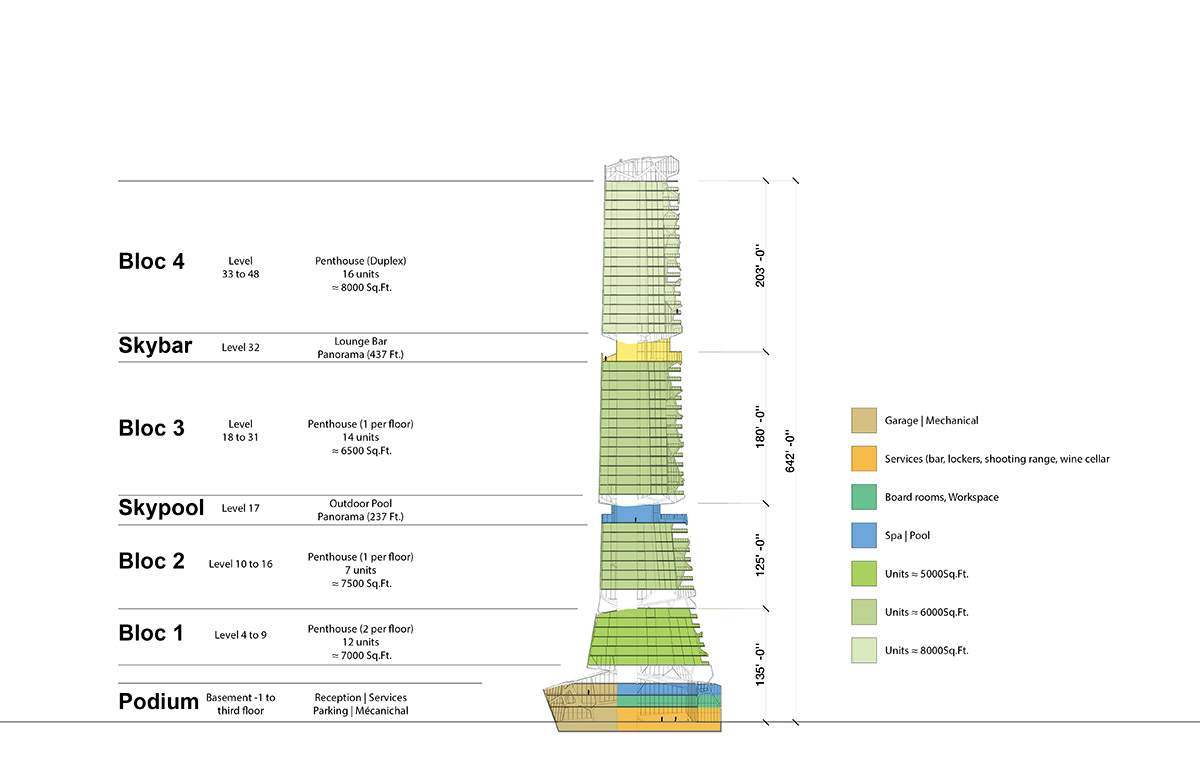 All images courtesy of MU Architecture