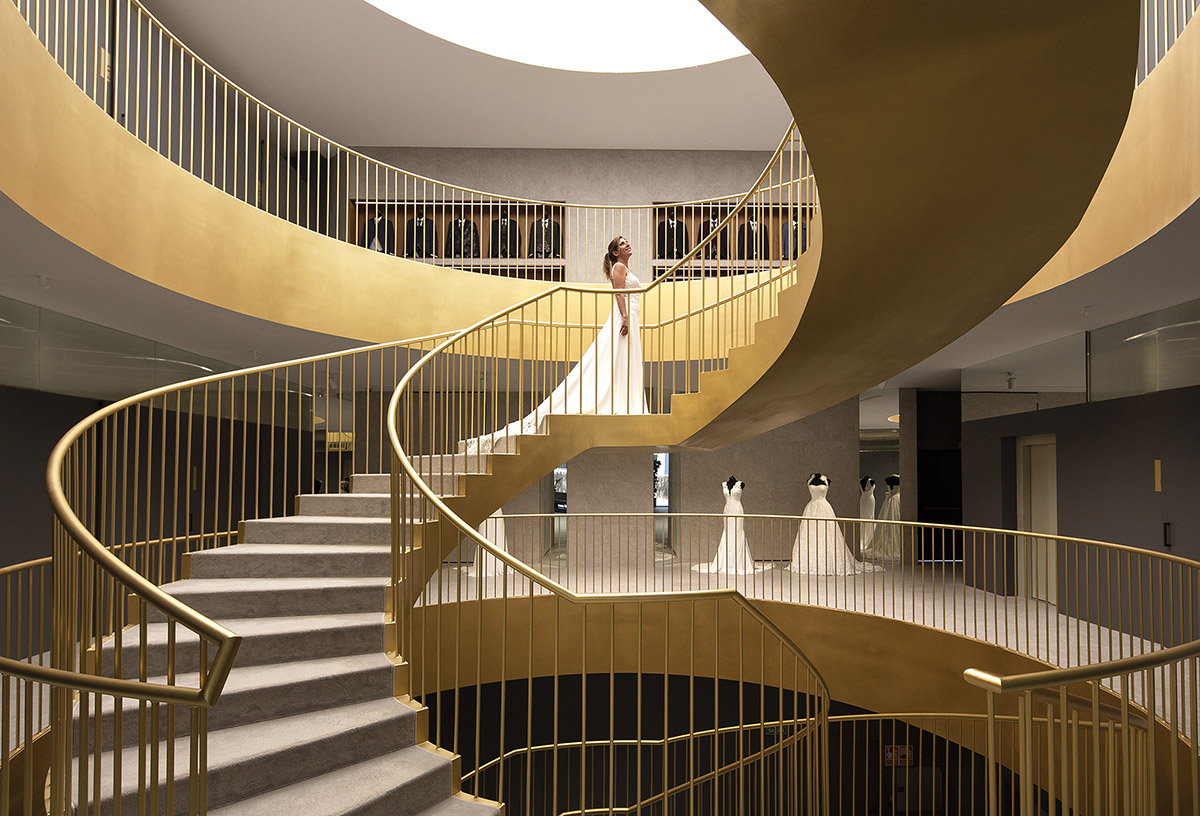 Spanish architecture and interior design studio Pablo Muñoz Payá Arquitectos has transformed an old industrial building into a bridal store featuring a giant golden staircase in the middle of the building.

Named Sedka Bridal Store, the store is located in Petrer, Spain and the interior of the building acts as a showcase element itself.

Industrial areas are places that offer large spaces and easy access, characteristics that now seem to be impossible to find in more consolidated urban areas. 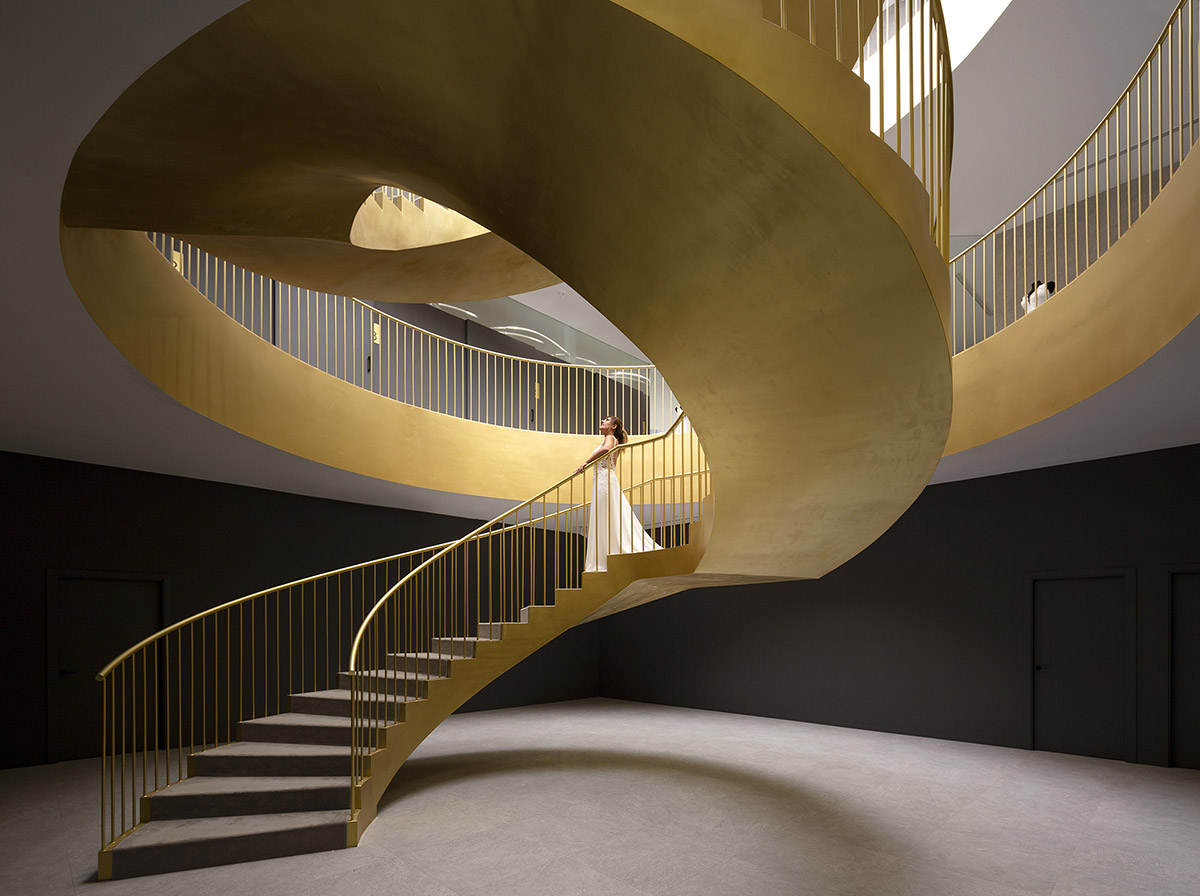 It is not surprising that  both retail traders and offices are setting up business in these areas, in an increasingly marked transition of industrial space towards the tertiary sector.

Spaces that can be generated by adapting old industrial buildings represent an inevitable chance for both owners and businesses, as for architects and designers. An example of this is the project for Sedka Novias carried out by Pablo Muñoz Payá, the Alicante architect studio established in Petrer. 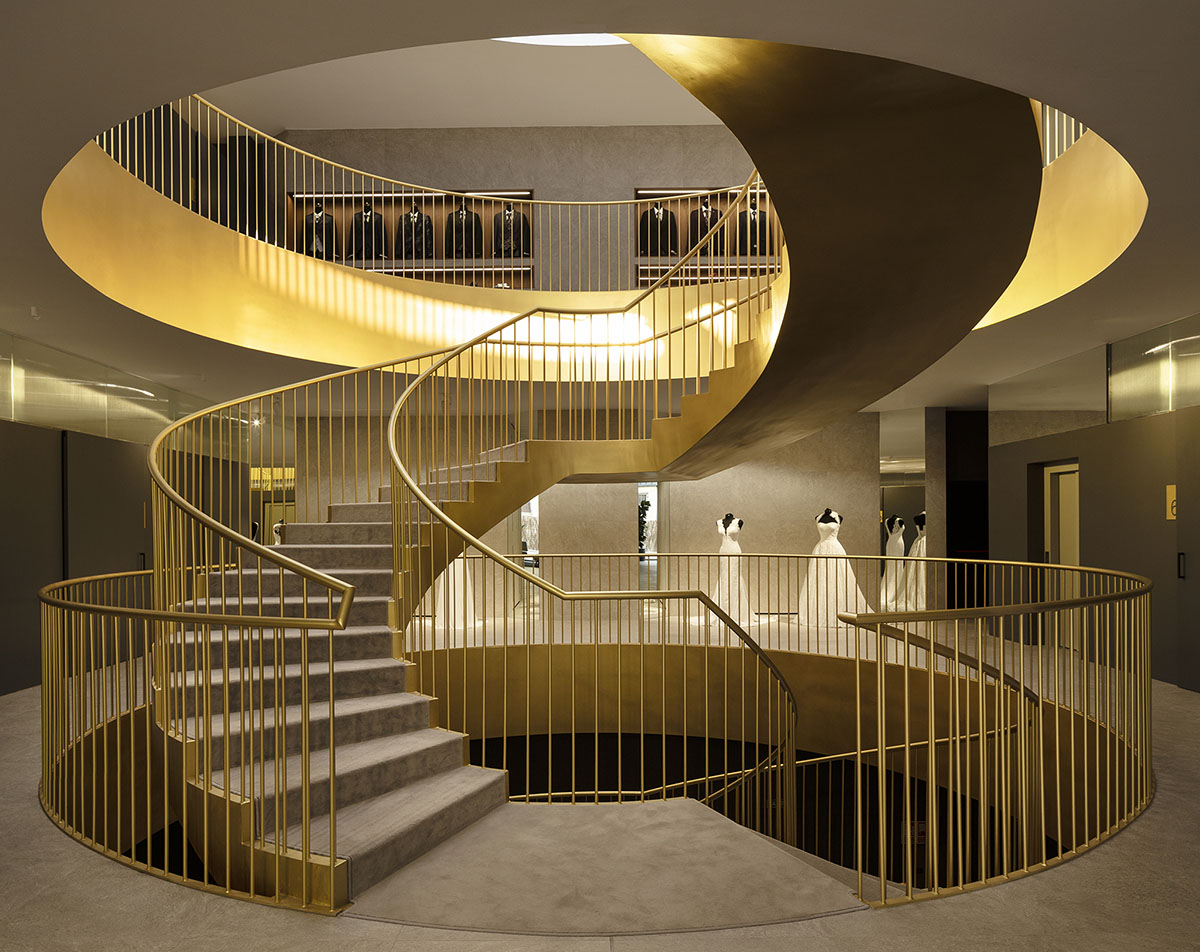 Sedka Novias is a business dedicated to the sale of wedding attire situated in the same town as the studio. The commission arises from the need to bring together the two shops of the company into a single ample and comfortable space by means of reforming an old industrial building.

With this project of Muñoz Payá, Sedka has opened the largest retail space in the Spanish wedding sector; and as great scale is not a synonym of better project quality, the Alicante studio has worked on design, materials and execution with attentiveness and success. 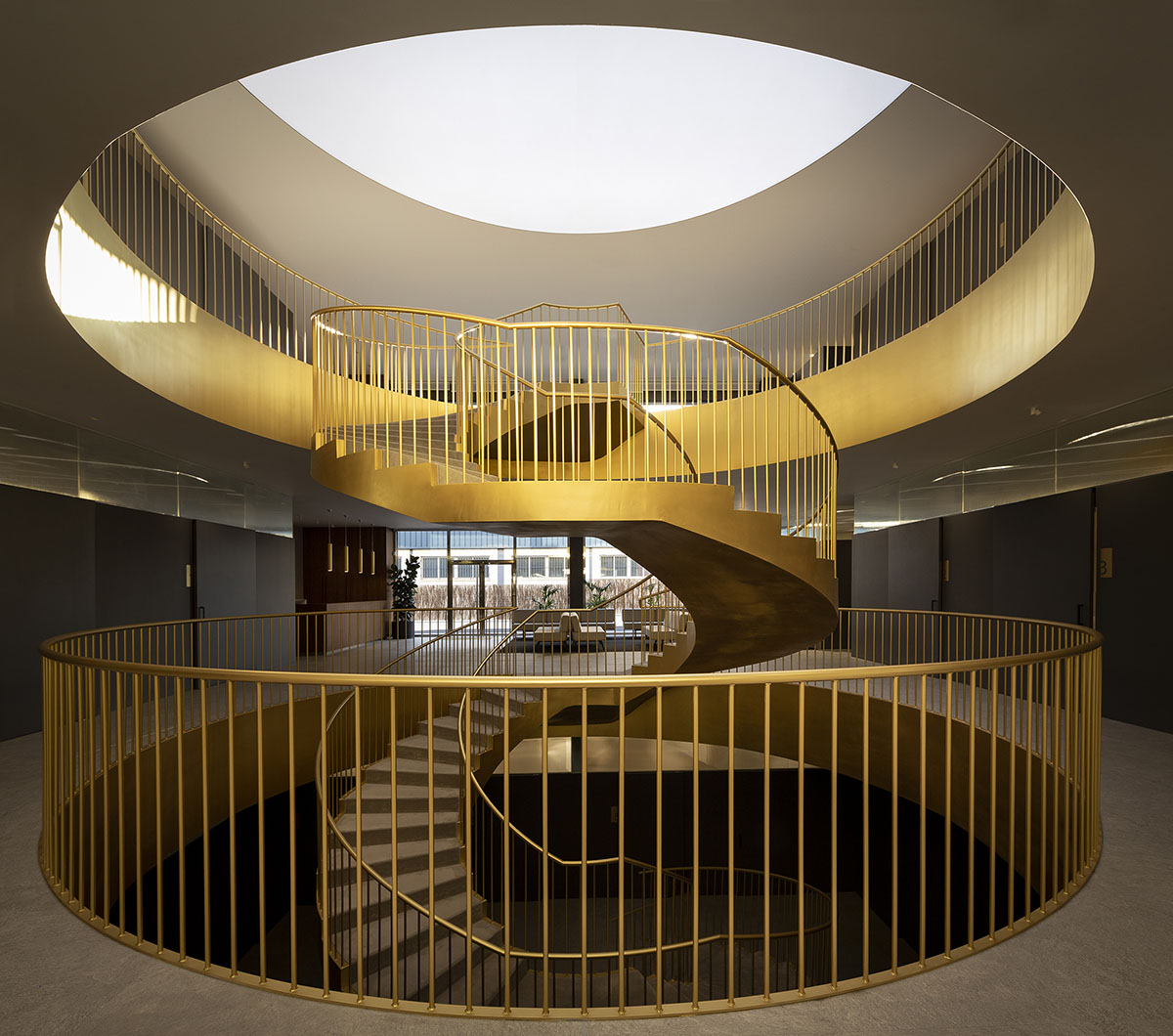 The project to reform the original building, which consisted of a basement and an open plan space of the height of two floors, involved the transformation of this into a building of three floors which house a program of uses for both sales and internal work.

Thus, the new building, distributed over a basement, ground and first floors, is seen through these new levels and the connection between them. This is achieved with a helicoid staircase inserted in the large central void, the staircase almost 8 metres in diameter being without doubt one of the great singularities of this project. 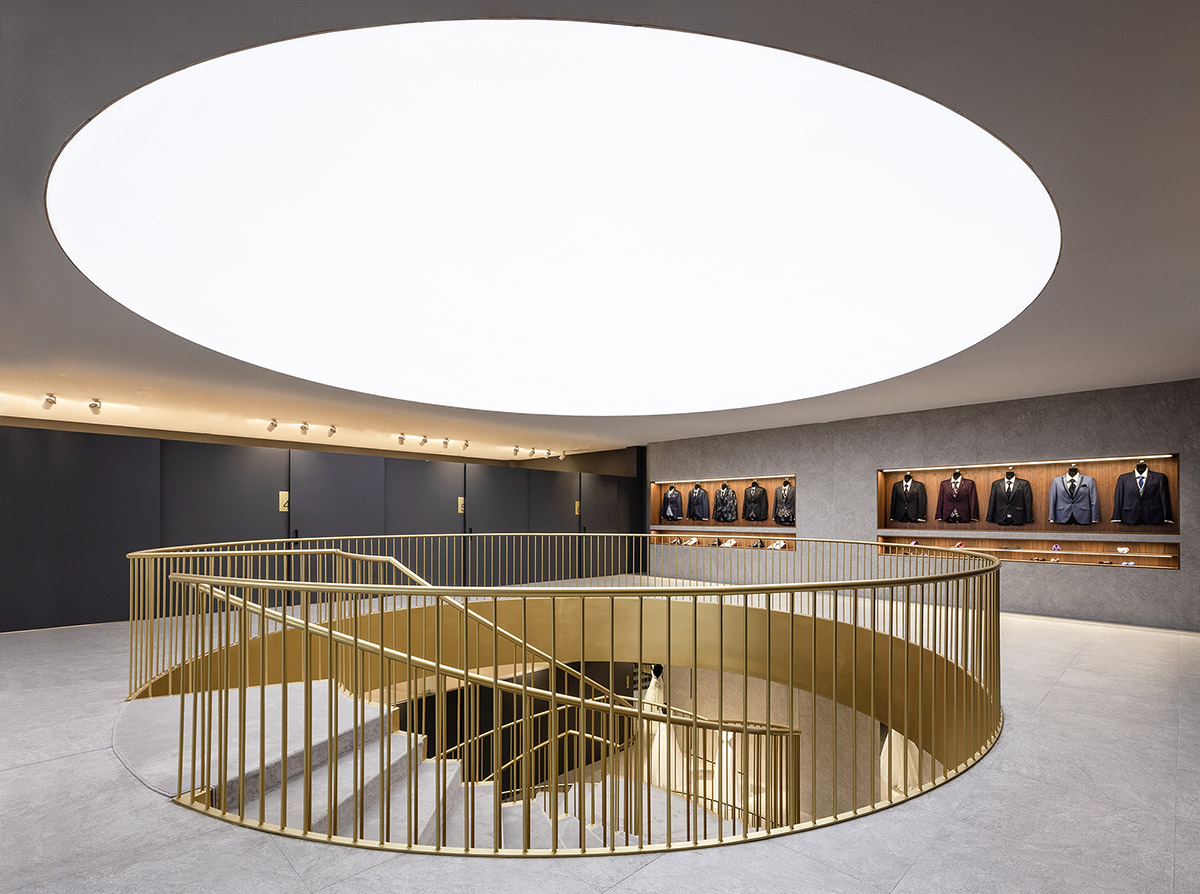 This central opening, which required the alteration and reinforcement of the original horizontal structure, culminates in its zenith in a skylight that lets light into the building magnificently, diminishing slightly towards the lower floors.

The basement houses the factory shop, consisting of changing rooms, a generously proportioned storeroom, and a large workroom to carry out adjustments. The ground floor is dedicated exclusively to women, with a reception area and waiting area, along with changing rooms of different types, storerooms, bathrooms and an area of shop windows. Finally, the first floor is aimed at men, along with an area for internal work. This level also has its own reception and waiting areas, changing rooms, storerooms, bathrooms and shop window. 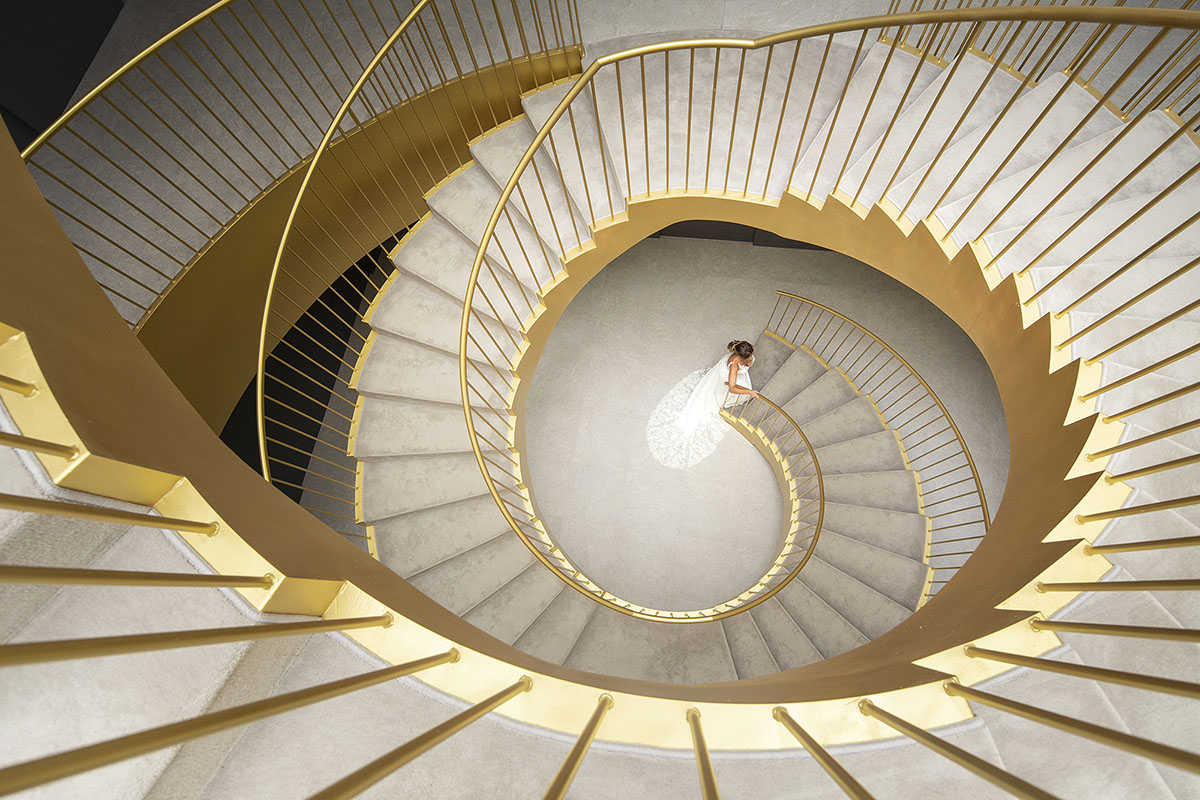 From the outside, the building is seen as a box. It is faced with undulated sheets which are micro-perforated, white and gold, a light material which lends the building a compact image from a distance, while nearby it appears softer, almost like fabric, like the veil of a bride. Material and colour play an important part in this project, working hand in hand with the client, to reinforce the character of each space. 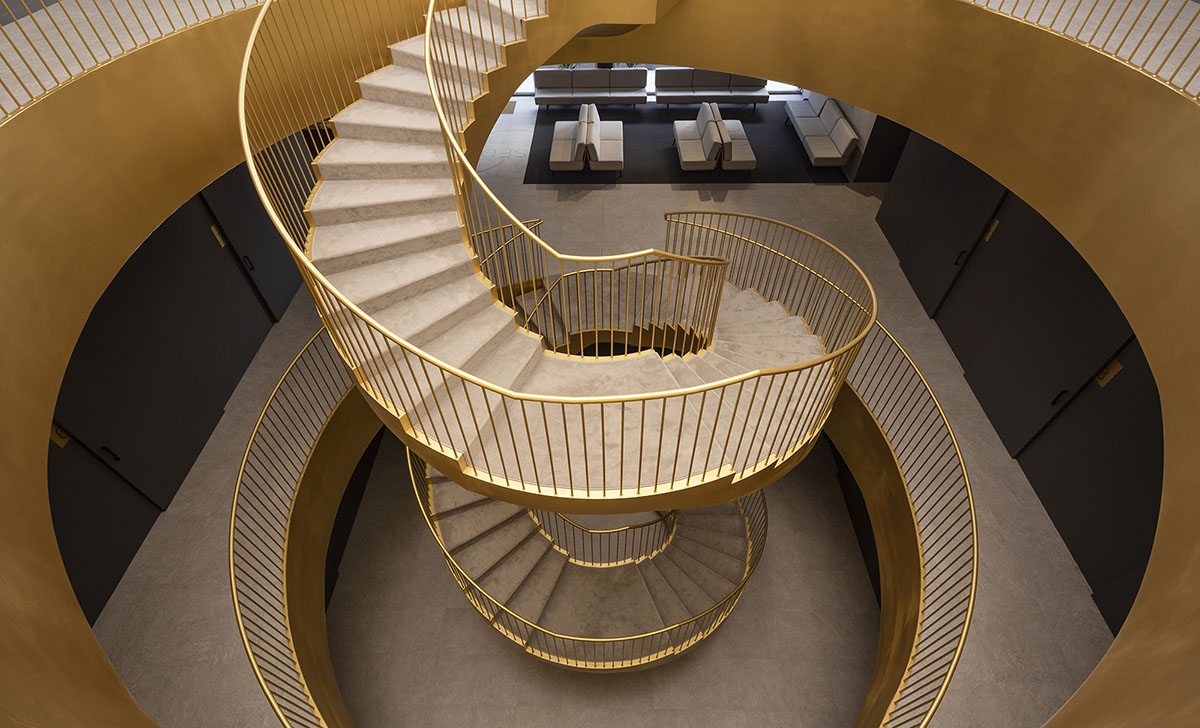 In the interior, the dark opaque vertical paraments mean that the light from the skylight illuminate the staircase in an almost ceremonial way, The staircase, seen from different view points, seems to be a set of linked wedding rings, while the gold tones distinguish it as the neurological element of the project. The combination of whites, greys and gold marks out the spaces, with each establishing a different dialogue with the natural light that penetrates the building. 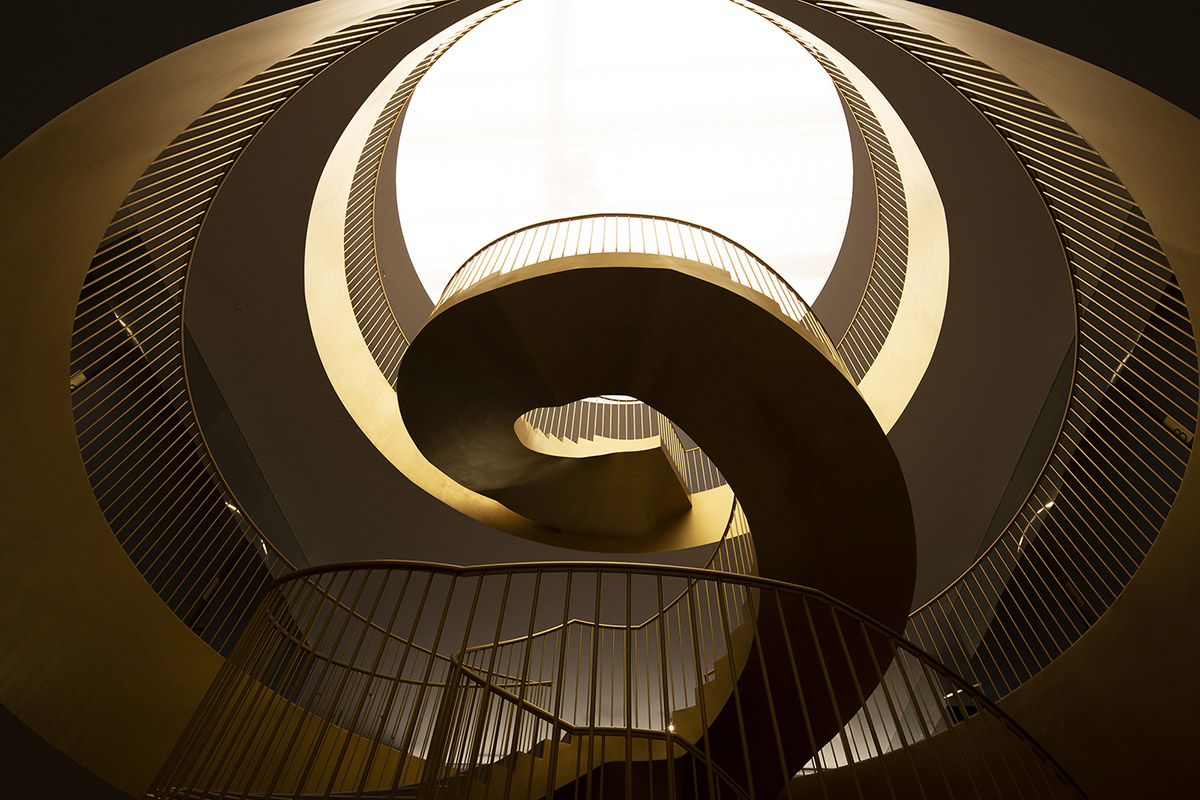 In this project, the studio of Pablo Muñoz Payá, hand in hand with a clear business  stake, redefines an industrial space, creating a unique, daring space where its visitors may indulge in the gift of allowing themselves to dream. 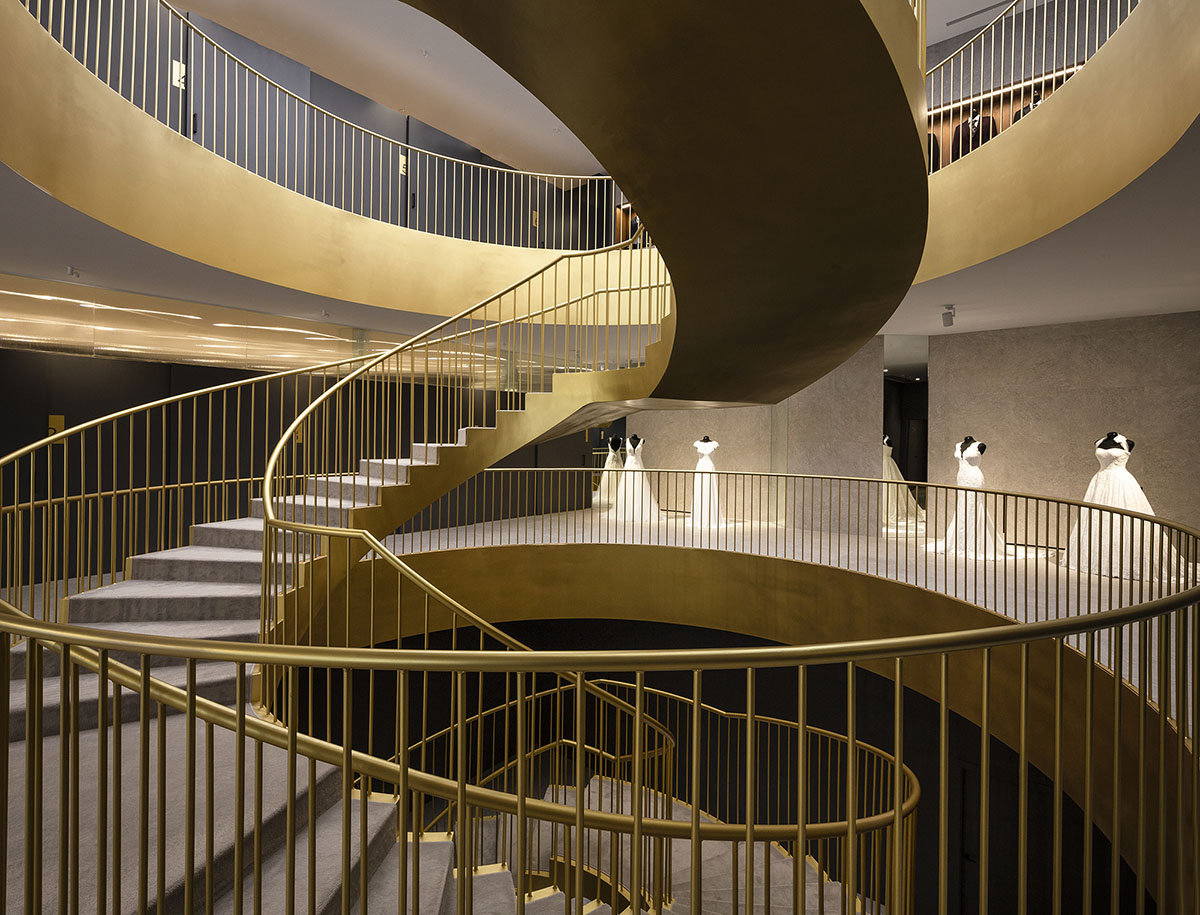 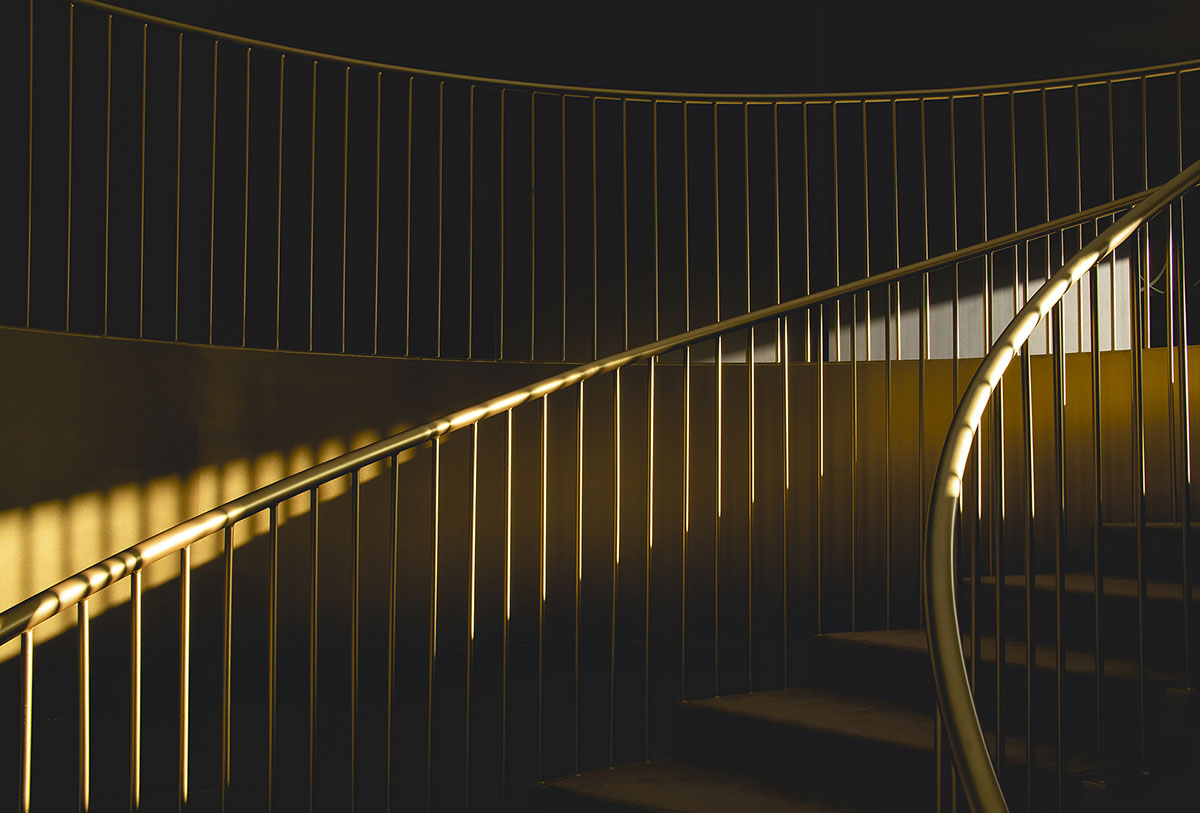 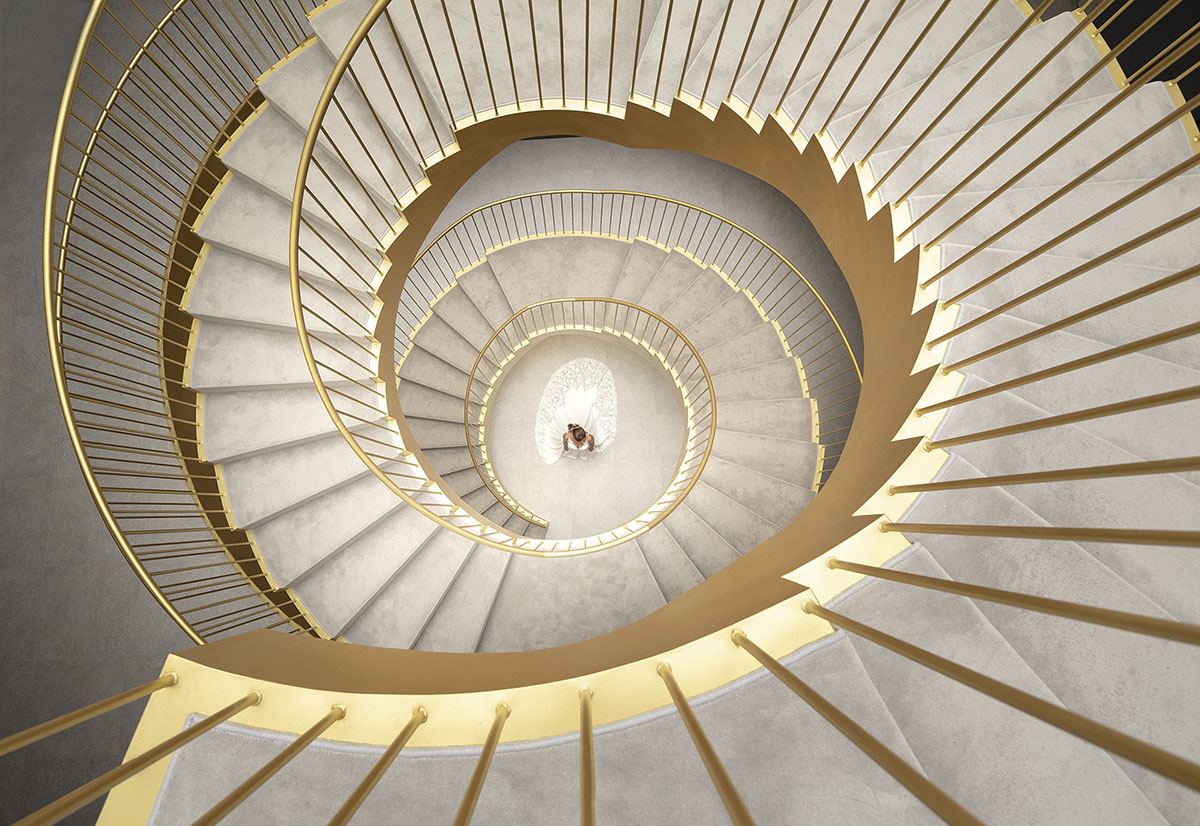 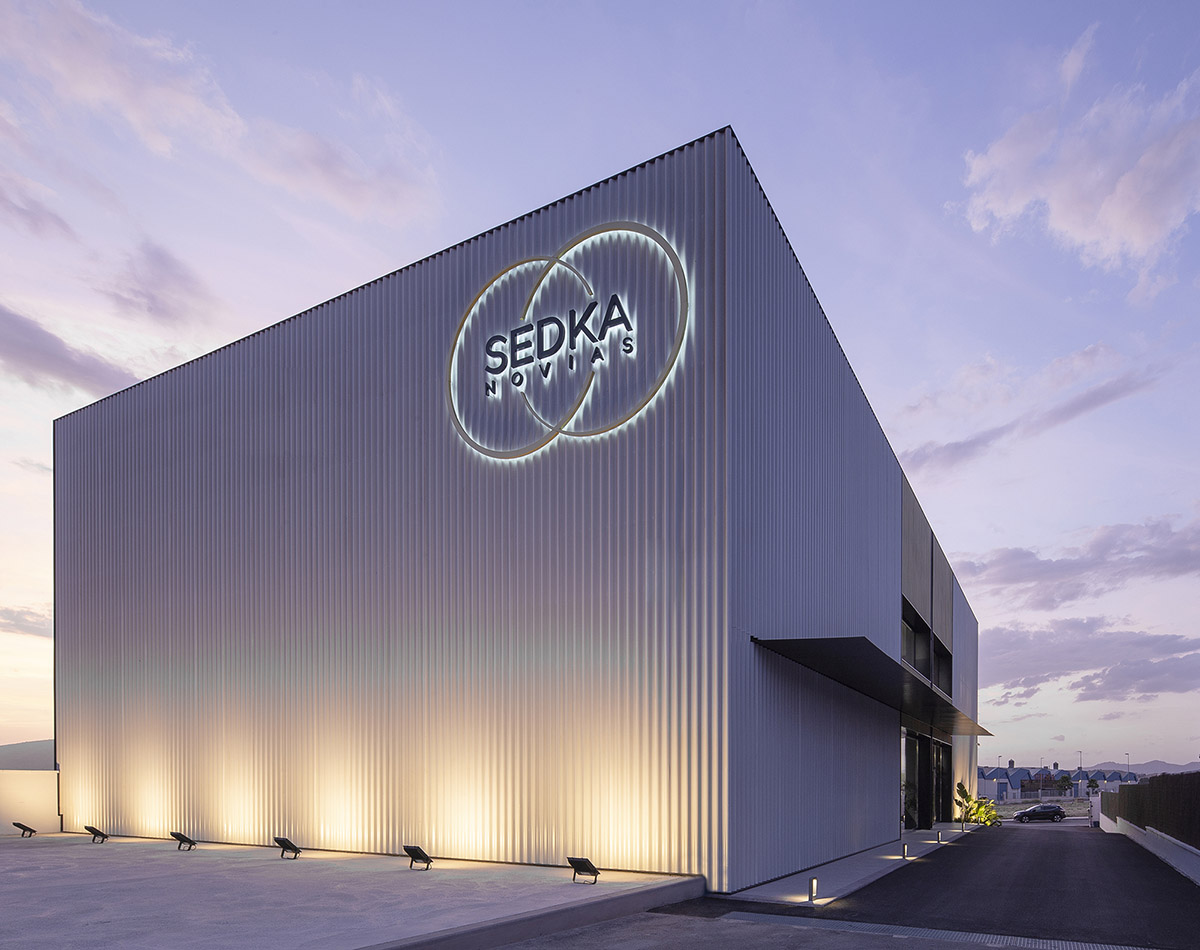 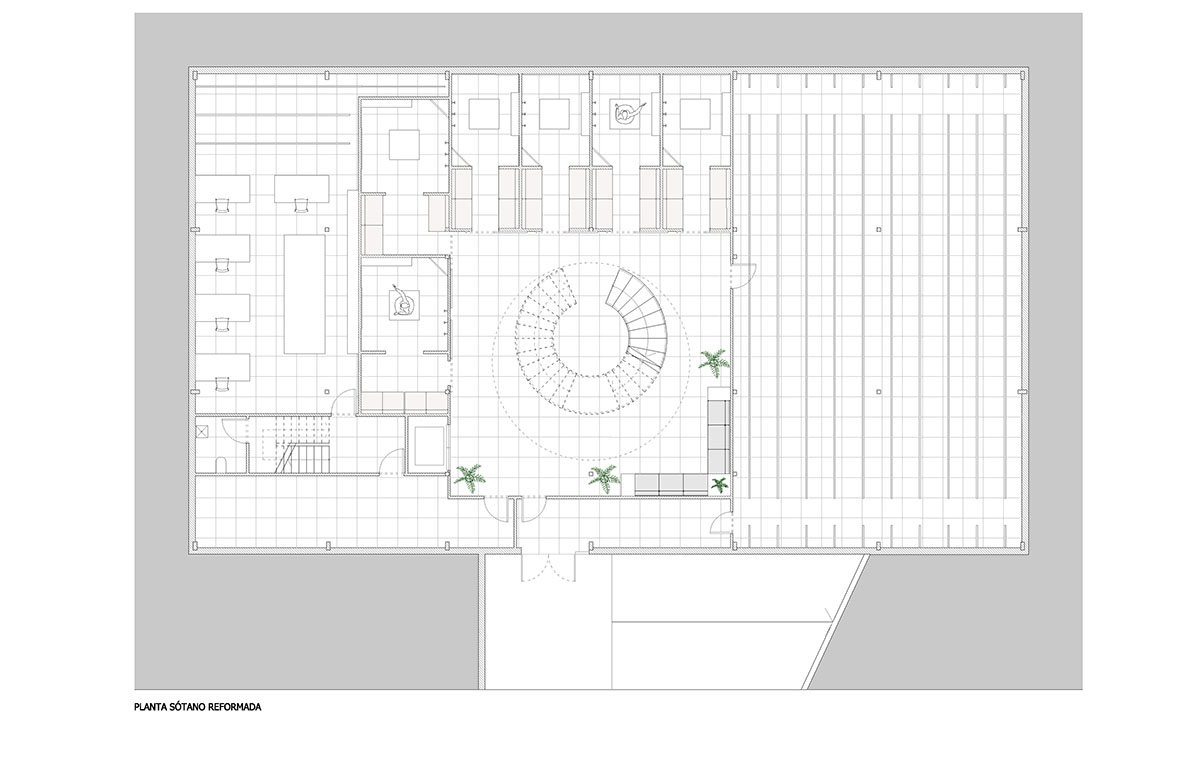 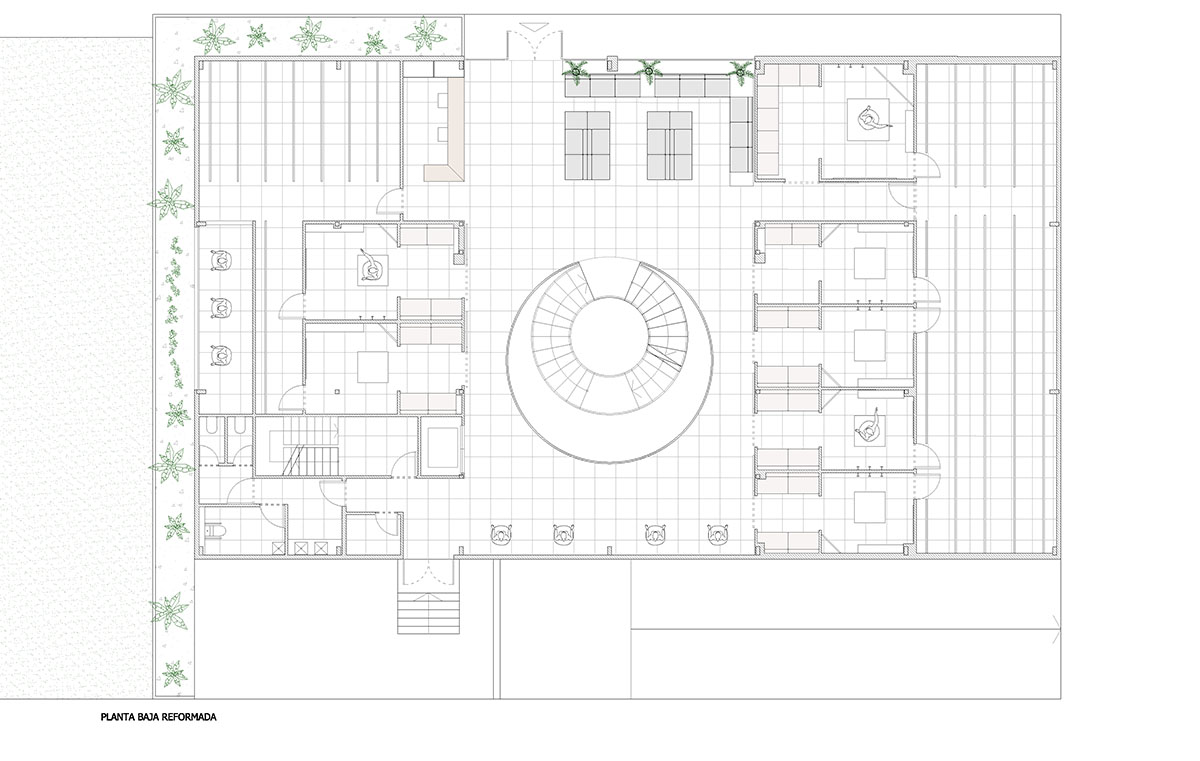 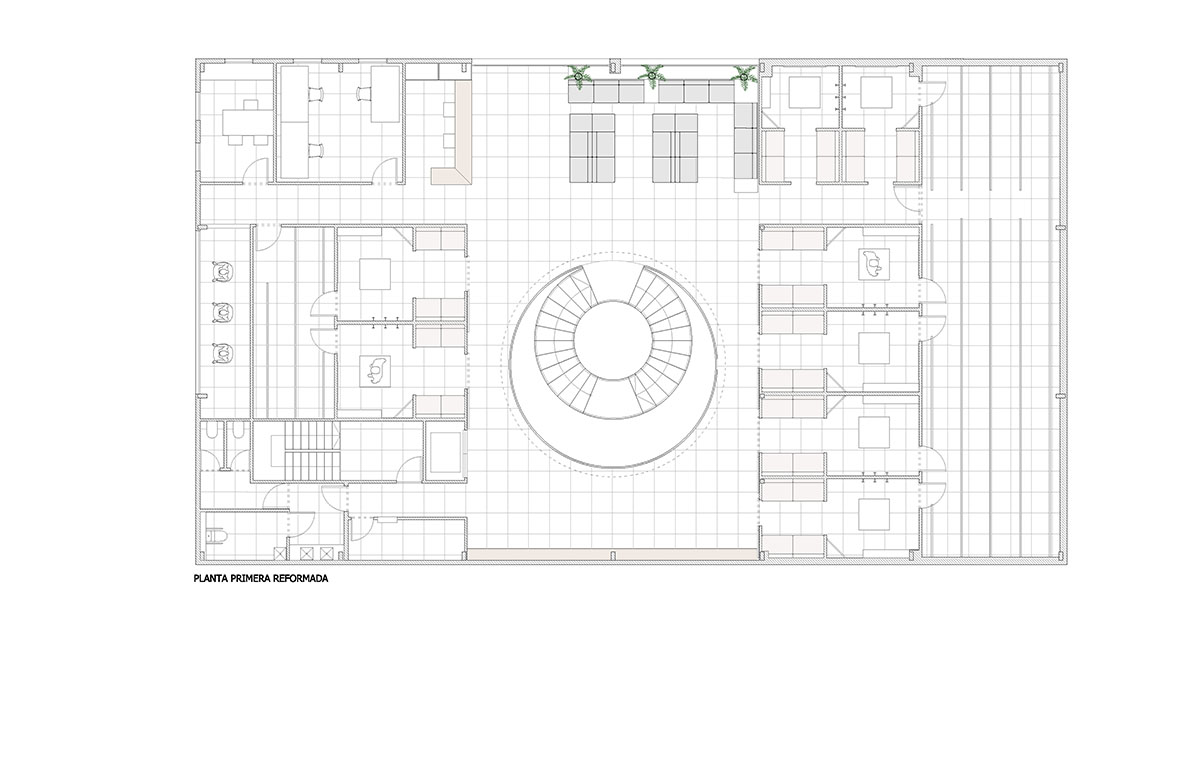 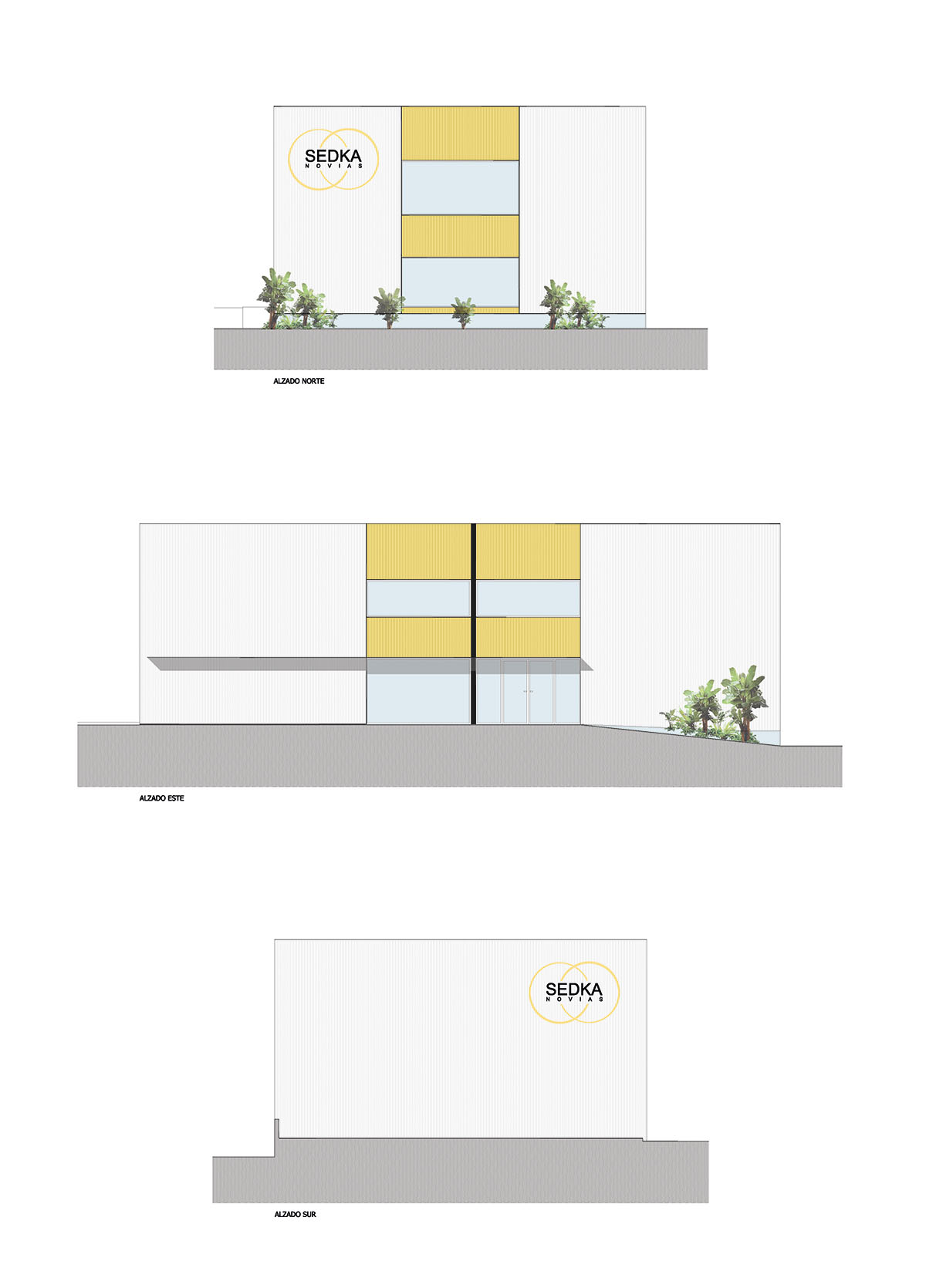