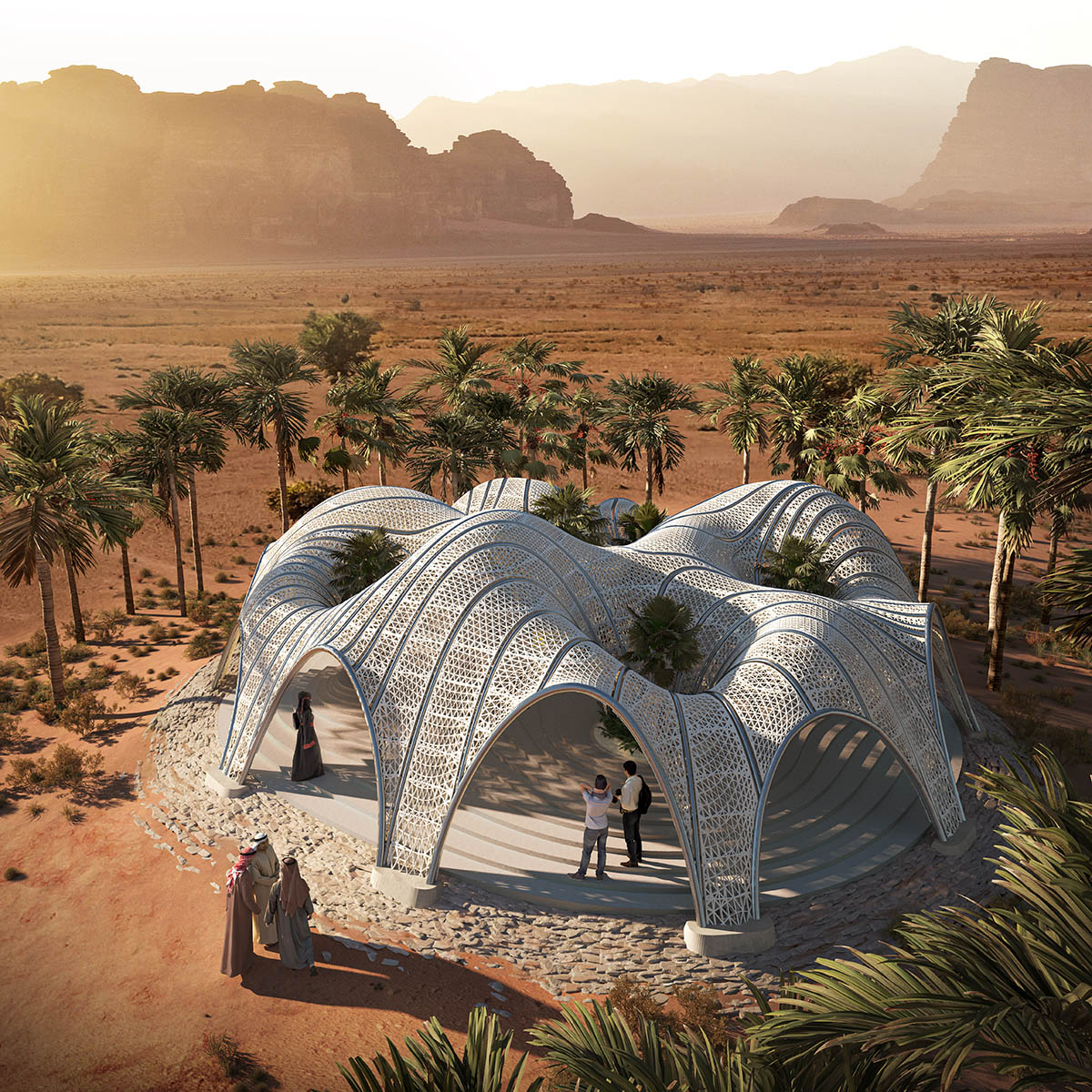 MEAN* (Middle East Architecture Network) has unveiled design for a desert pavilion by creating a wavy 3D printed polymer mesh on the desert of Wadi Rum, south of Jordan.

Called Desert Pavilion, the shell-like structure was designed to serve as an oasis of rest and communal gathering. The studio was inspired by the beauty of the desert that is reflected on the structure.

"Drawn to its otherworldly beauty, The desert of Wadi Rum in the south of Jordan attracts visitors from all over the globe," said MEAN*.

"The topography of Wadi Rum closely resembles that of Mars. This serene desert landscape had been a stage for many space-age movies such as ‘The Martian (2015)’, ‘Rogue One: A Star Wars Story (2016)’ and ‘The Last Days on Mars", added the studio. 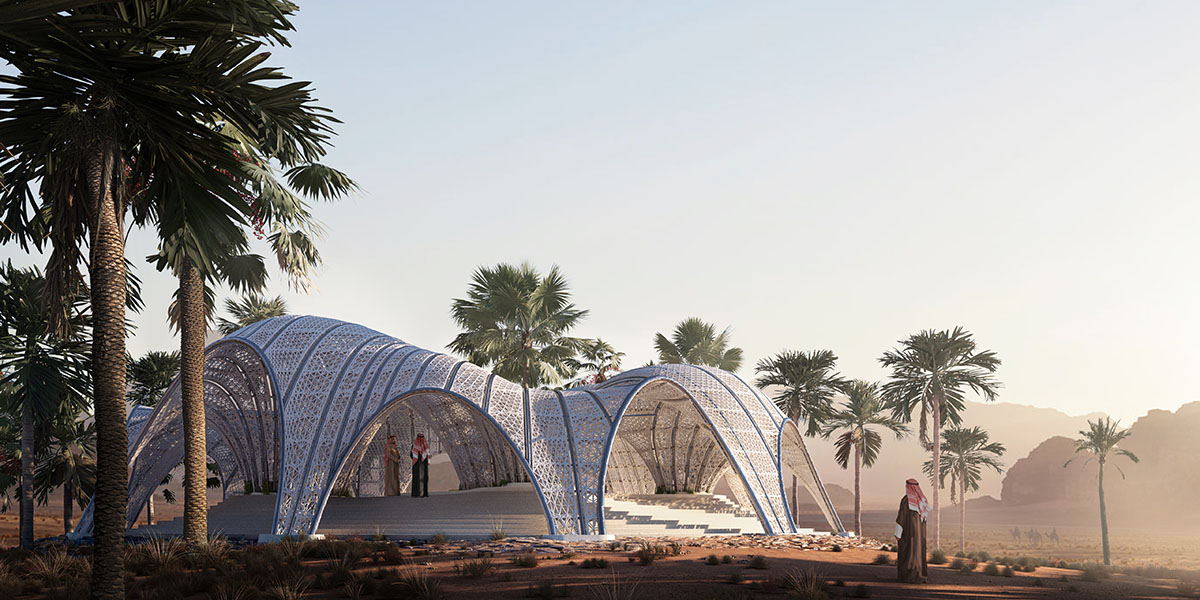 The structure, specifically, takes cues from the lightweight geodesic dome system of "Mars Camp" which is located on a plot near the site, the design team envisioned a novel system of 3D printed panels that can be deployed onto a CNC (Computer numerically controlled) bent, steel pipe system.

Inspired by the ingenuity of the mobile architecture of the local Bedouins, the architects were inclined to simulate a tent-form using the "Mesh Relaxation" parametric strategy, which generates a digital Catenary mesh geometry, in equilibrium. 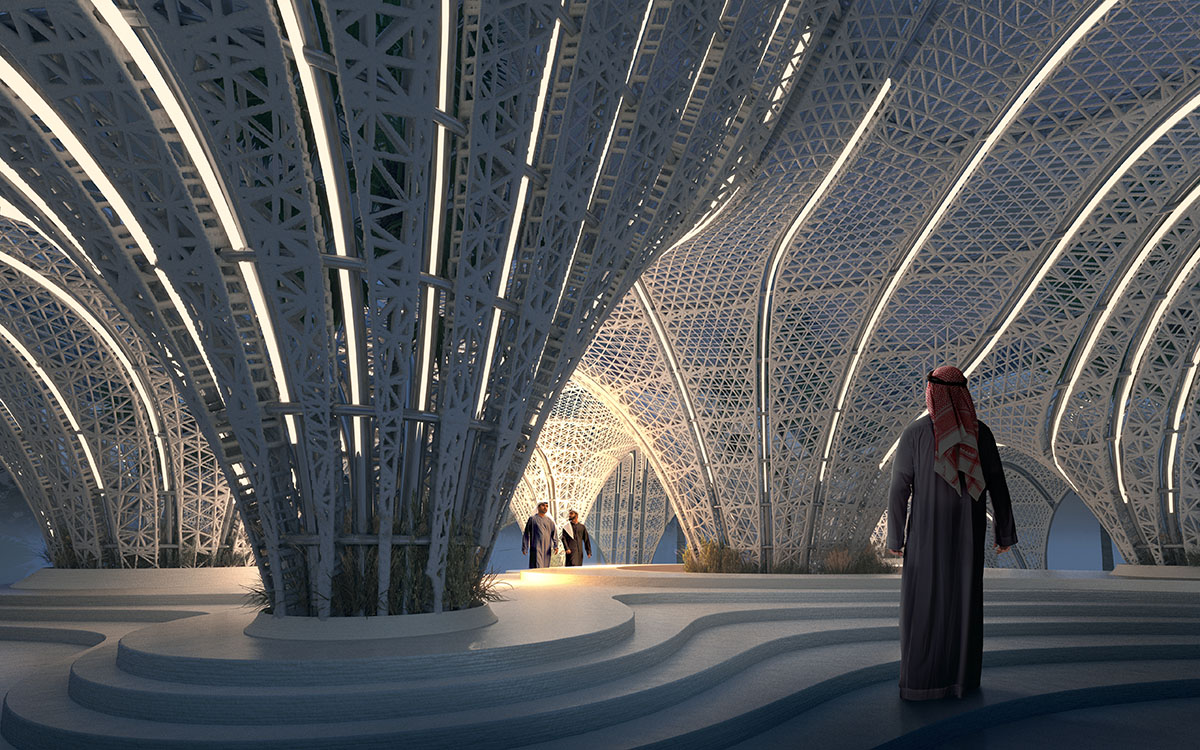 The pavilion is generated from a field of forces

By grounding the tent form as a 'diagram of forces' emitting various 'charges' that correspond to seating areas, the team looked at the phenomena of magnetic fields to unify those charges.

"We used the patterns emerging from the interaction of one space to another, to develop the floor plan of the pavilion," added the studio in its project description.

The physical phenomena of the magnetic force patterns between a number of nodes represents an opportunity for an interesting planning strategy. To quantify this phenomenon into a digital algorithm simulating those patterns, the team wrote a script that adopts the 'RK4 Method', developed by the German mathematicians C.

Runge and M.W. Kutta. Around 1900. The ‘flow-lines’ from the magnetic field simulation are projected onto a digitally simulated optimized mesh which is generated via a script that approximates centenary curves.

The script generates vector fields resembling magnetic forces which are then manipulated to subdivide the outer shell of the structure into panels that are within the printing range of a 6-axis industrial robot.

A stepping topography of 3D printed concrete platform creates a transition from the sandy site to the interior. The mesh is anchored towards the periphery of the stepped platform, creating welcoming archways for entries. 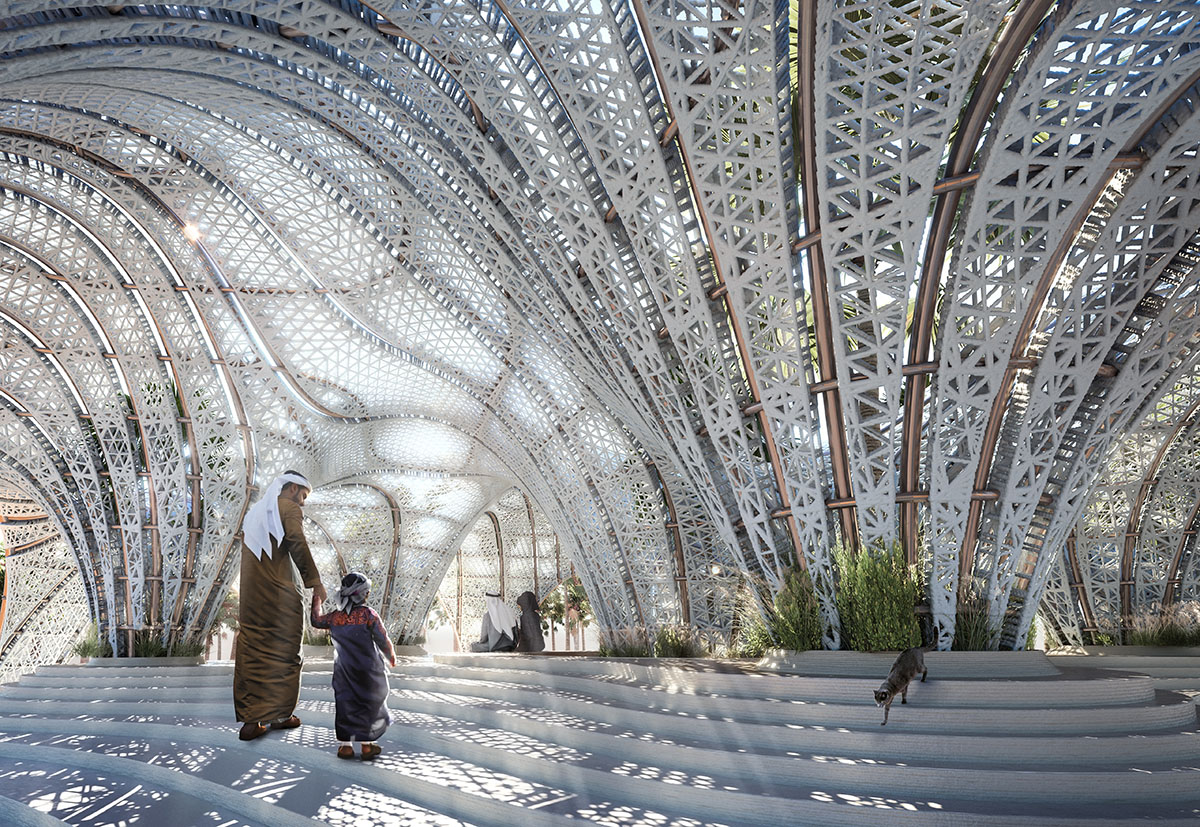 An Oasis of shade and a micro-ecology within the desert

The points of which all the field lines emerge from the center where the supporting pipes are grounded, forming funicular touch-points, around which seating areas are allocated. At the center, desert trees and shrubs are planted to regulate the atmosphere of the interior. These funnels also act as ‘light-wells’ capturing natural daylight and channeling it into the space.

The panels making up the outer shell are tessellated for maximum efficiency for 3D printing. These tessellated panels filter light into the space while ensuring a well ventilated interior. At night, linear lighting fixtures that are aligned along the force field patterns, create a gentle ambient lighting within the interior. The Desert Pavilion is the outcome of combining ideas from the site with current building technologies.

The structure is designed to form a space of shade from the heat of the desert during the day, and a place of celebration, storytelling and rest, at night. It serves as a welcoming hospitable shelter for today and a case study for inhabiting the arid landscapes of Mars in the future. Plan of the pavilion 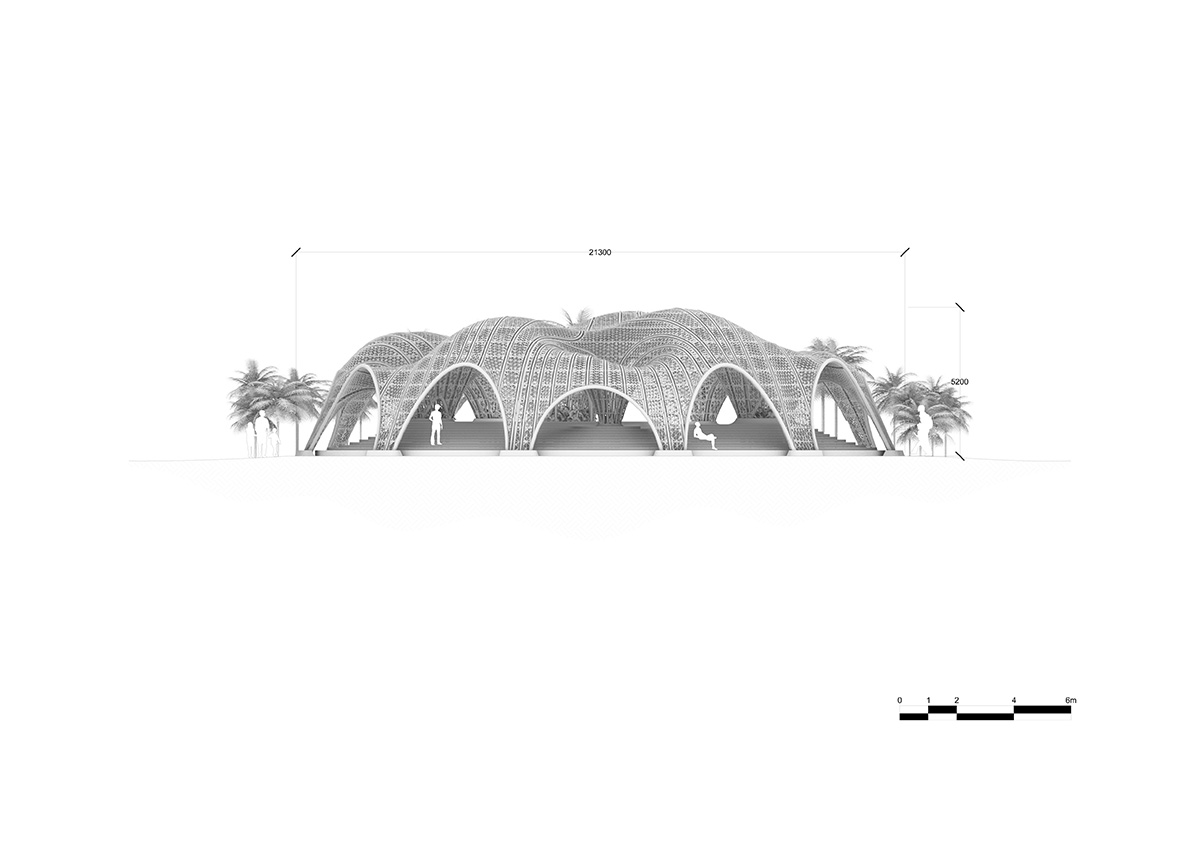 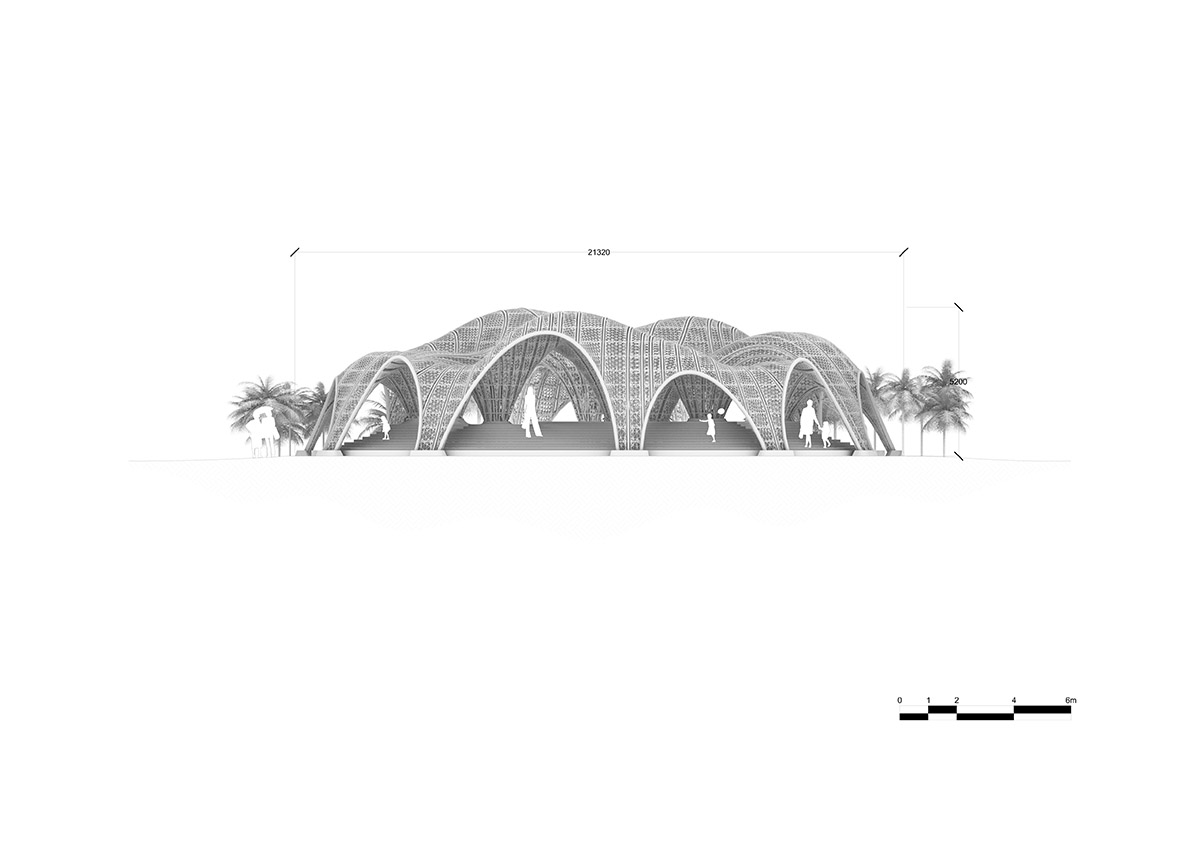 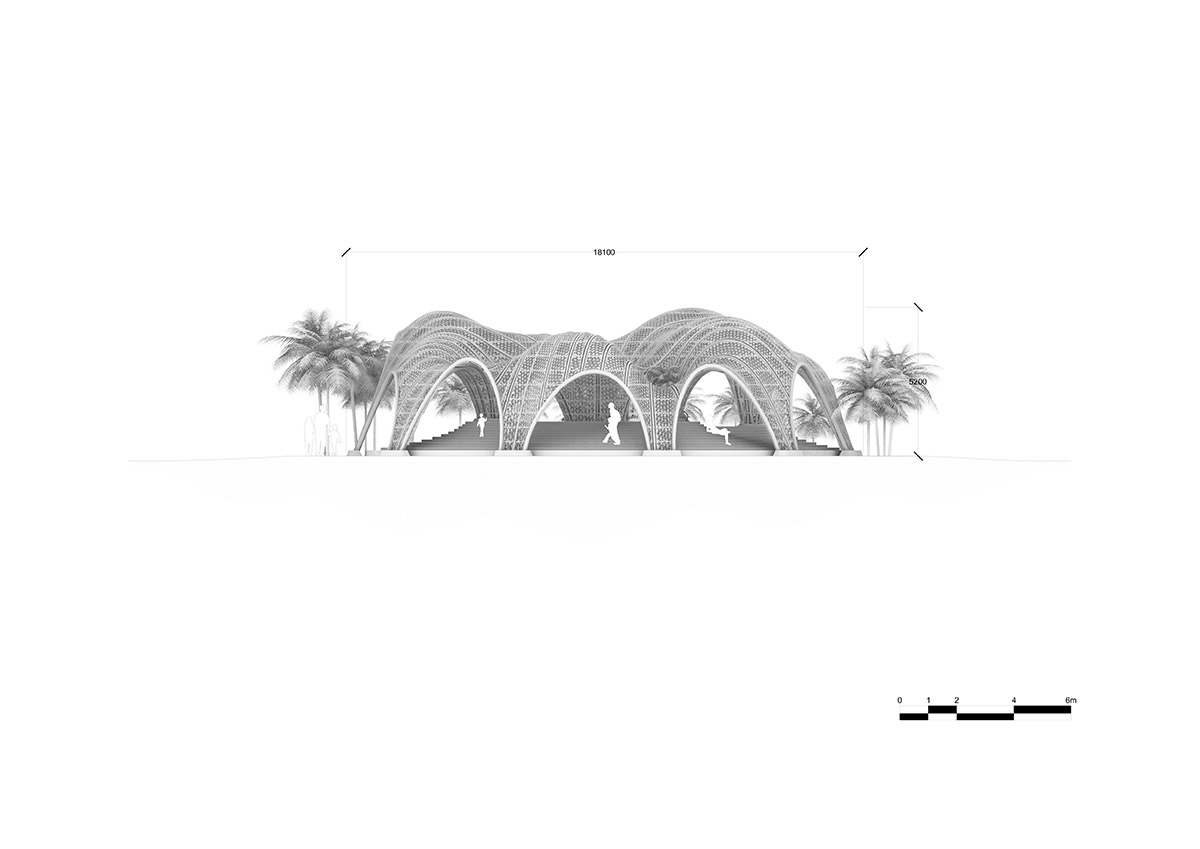 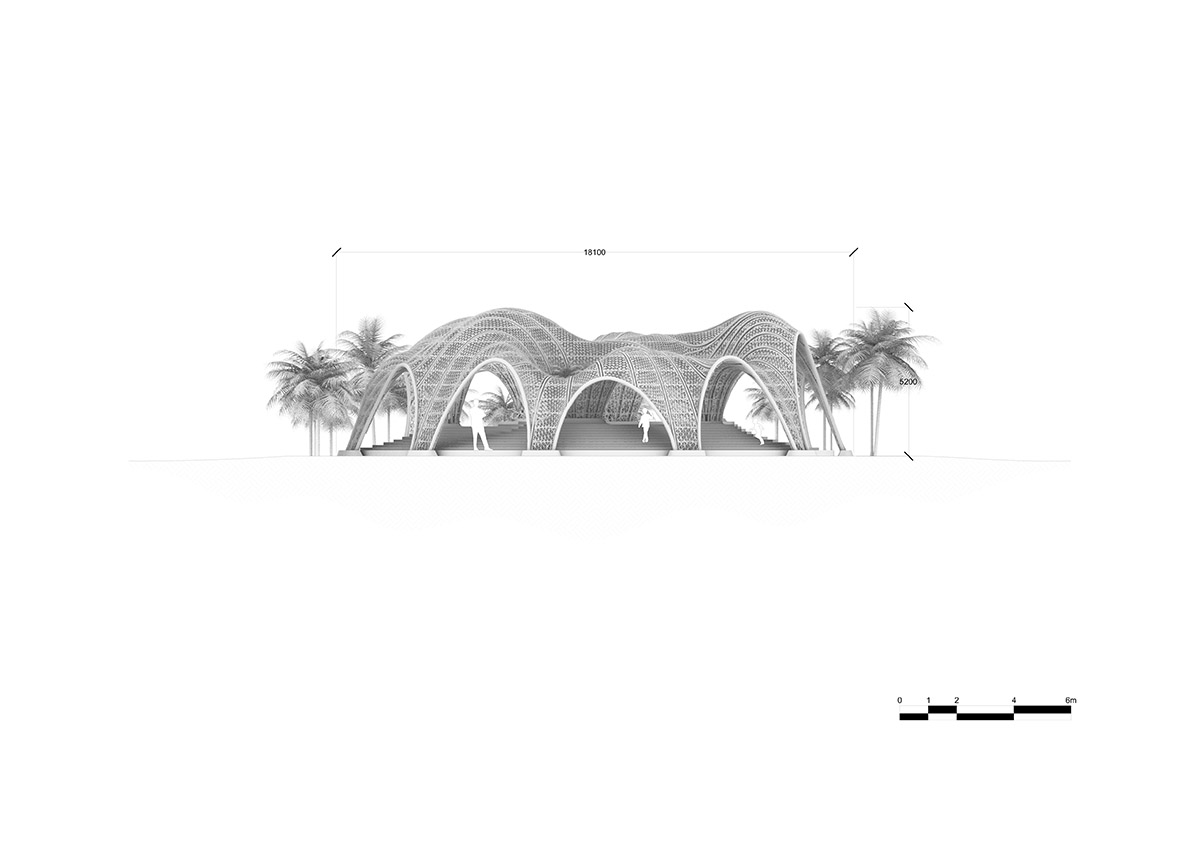 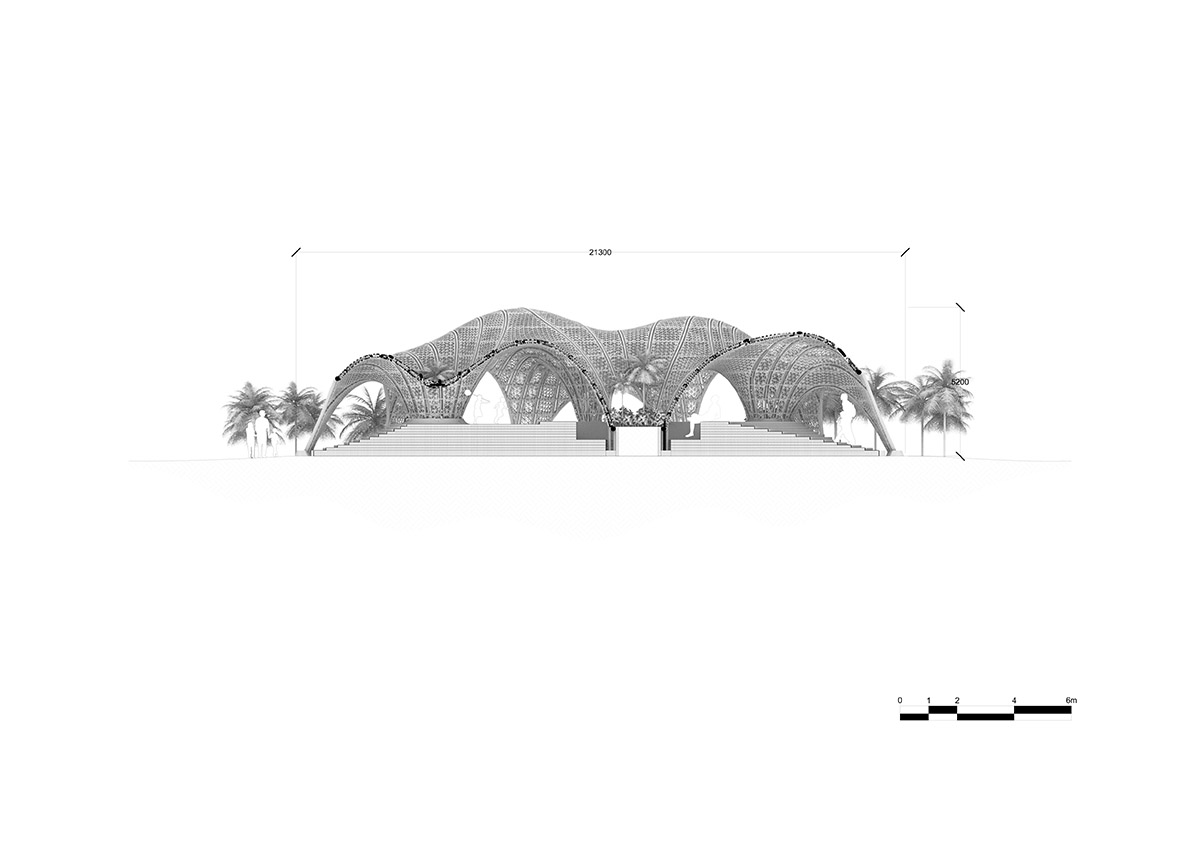 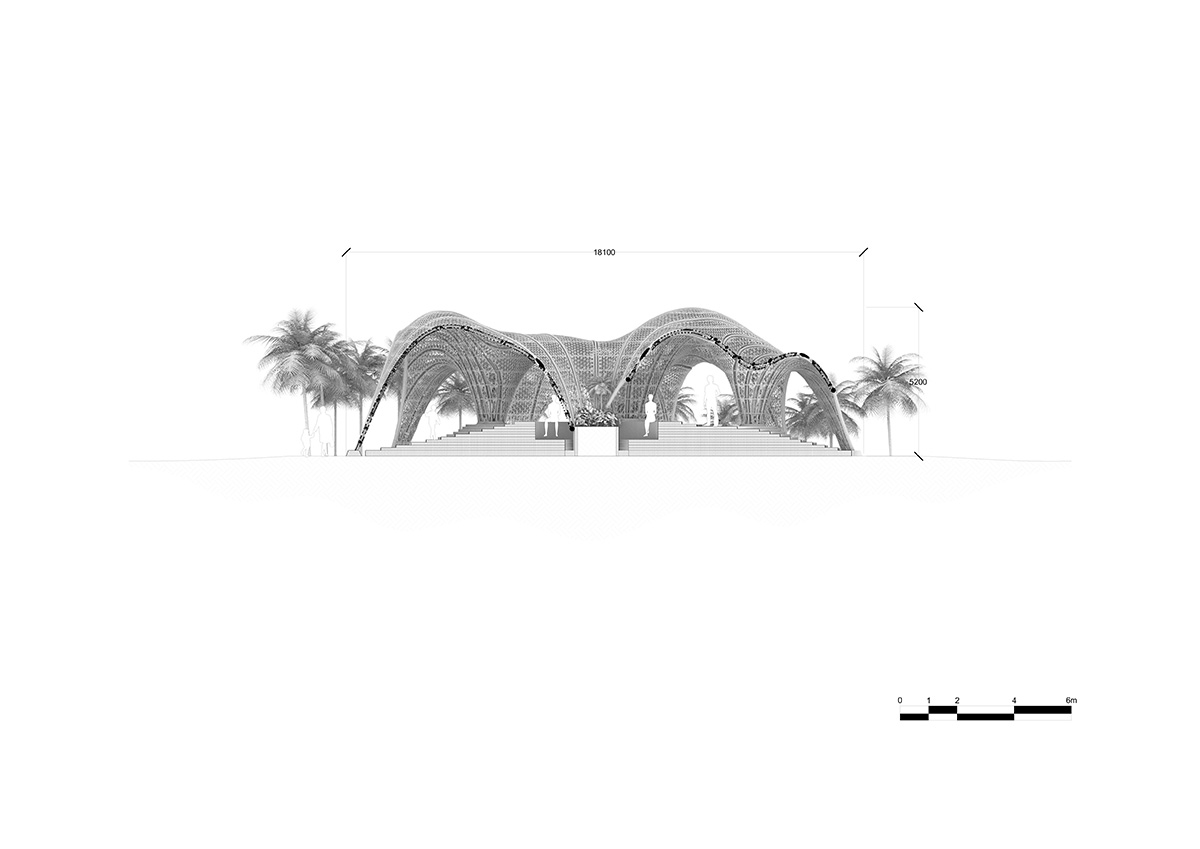 MEAN*, founded by architect, entrepreneur and researcher Riyad Joucka, is an innovative architecture practice that works at the nexus of design and emergent technologies.