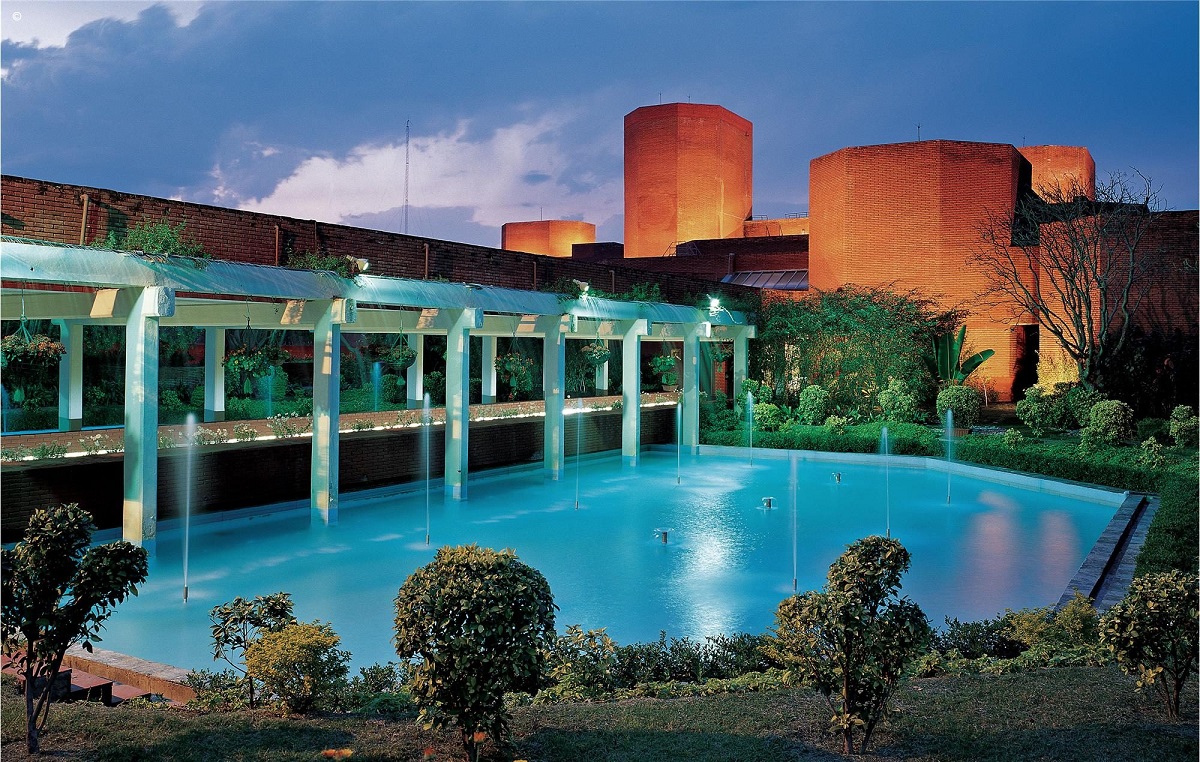 Since its inception in 1977, the Aga Khan Award for Architecture has been given to 114 projects in 13 cycles. Out of these, India got only six awards. Till recent past, none of these projects has been featured on WAC portal. We endeavour to publish these projects, one by one, for the perusal of the readers. WAC has already featured one such project EDII Ahmedabad on May 2, 2019. In continuation with the same aim, we are publishing another project – Mughal Sheraton Hotel, Agra which was the first recipient of Aga Khan Award for Architecture in 1978-80.

The Mughal Sheraton – a five-star hotel in Agra has been conceived and designed to capture the spirit of traditional Mughal architecture in a contemporary medium, to use and develop local trades and crafts, and to stimulate the local economy. It was aimed at to provide adequate hotel, restaurant, and meeting facilities for visitors to the historic Taj Mahal, Agra Fort and Fatehpur Sikri. 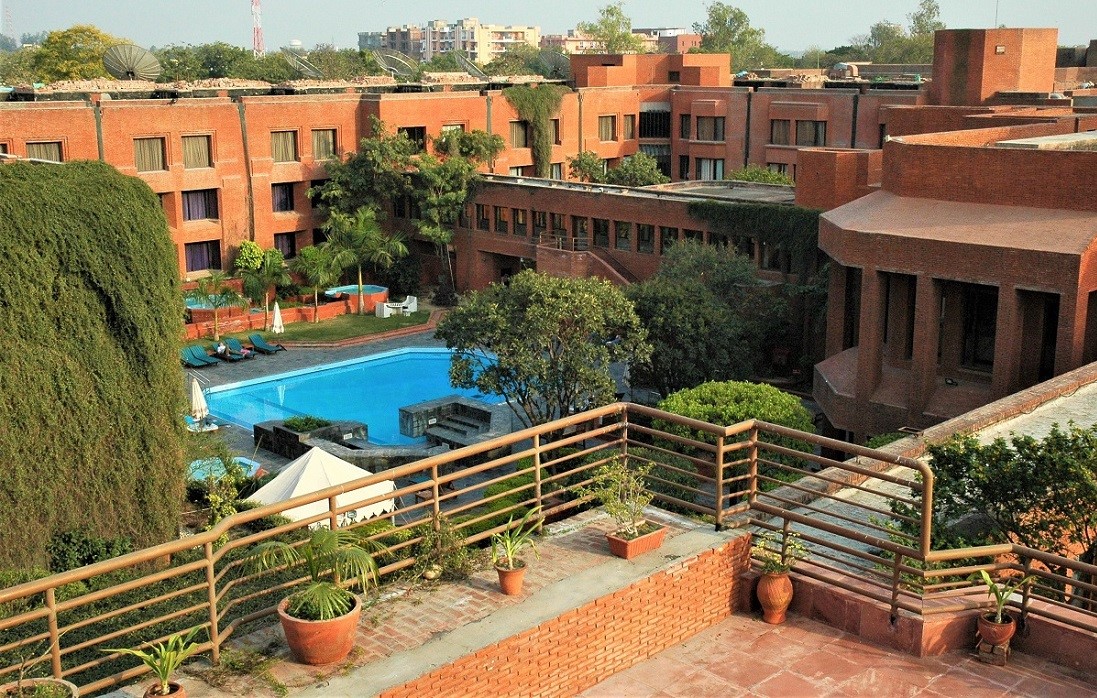 Constructed in 1976, the Mughal Sheraton Hotel was designed by ARCOP Design Group – a firm which was specially formed for this purpose by merging two firms – the ARCOP Montreal, headed by architect Ramesh Khosla, and the Design Group, New Delhi, headed by architects Ranjit Sabikhi and Ajoy Chaudhury. Apart from these, architect Ravindra Bhan was involved in landscape design and Anil Verma in interior design.

The campus of Mughal Sheraton is spread over an irregular-shaped plot of about five hectares. It is located 1.6 km from the Taj Mahal and 3 km from the Agra Fort. The hotel consists of 290 guest rooms, four restaurants, two conference rooms, a health club, recreational facilities, shopping arcade and necessary support facilities. 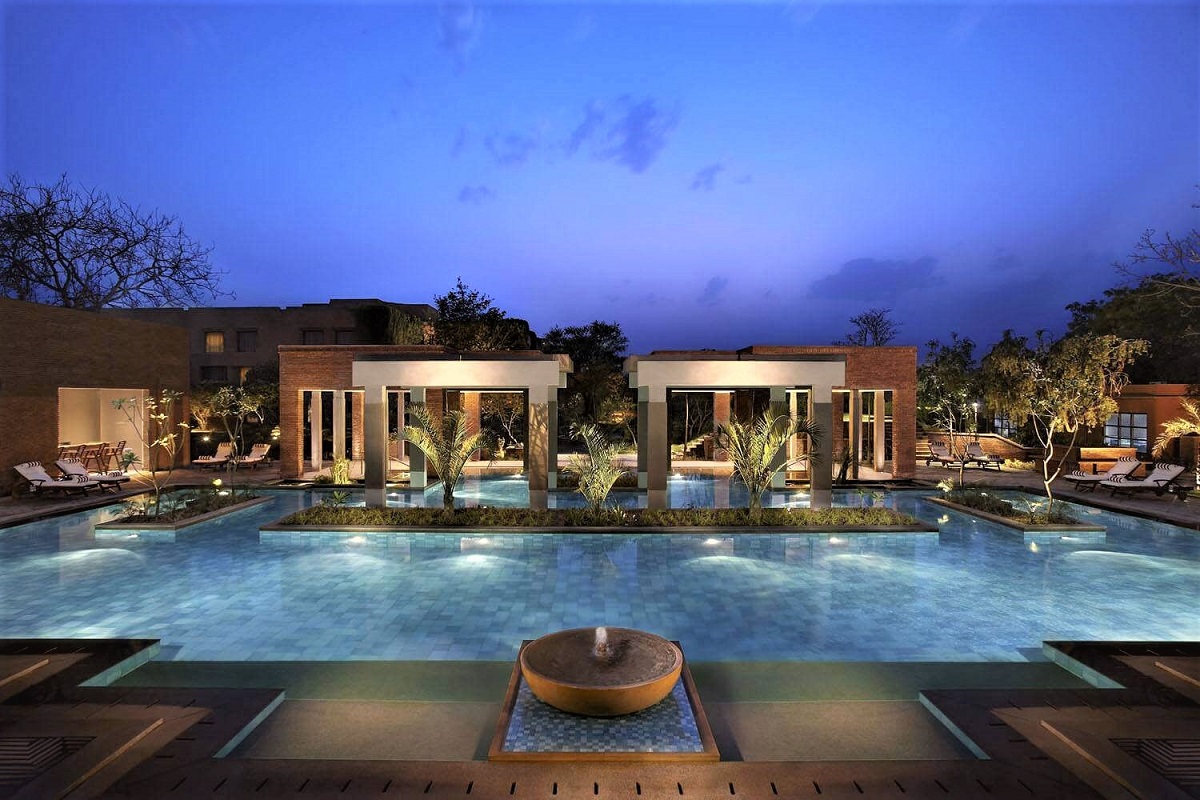 The hotel complex is organised into blocks, separated according to functions. A central block houses all public spaces and administration. Services are grouped in an adjacent block to the west, directly accessible to the service yard. The guest rooms are organised around three courtyards in two-storey quadrangles. They are linked to each other and to the central public block by enclosed pedestrian bridges. The courts are gradually excavated to a level 12 feet below grade by a series of landscaped terraces, pools, and fountains that act as buffer zones between private rooms and common areas. A formal Mughal garden, on axis with the Taj Mahal, provides a vista for the central building and serves as the focal point of the walkways. 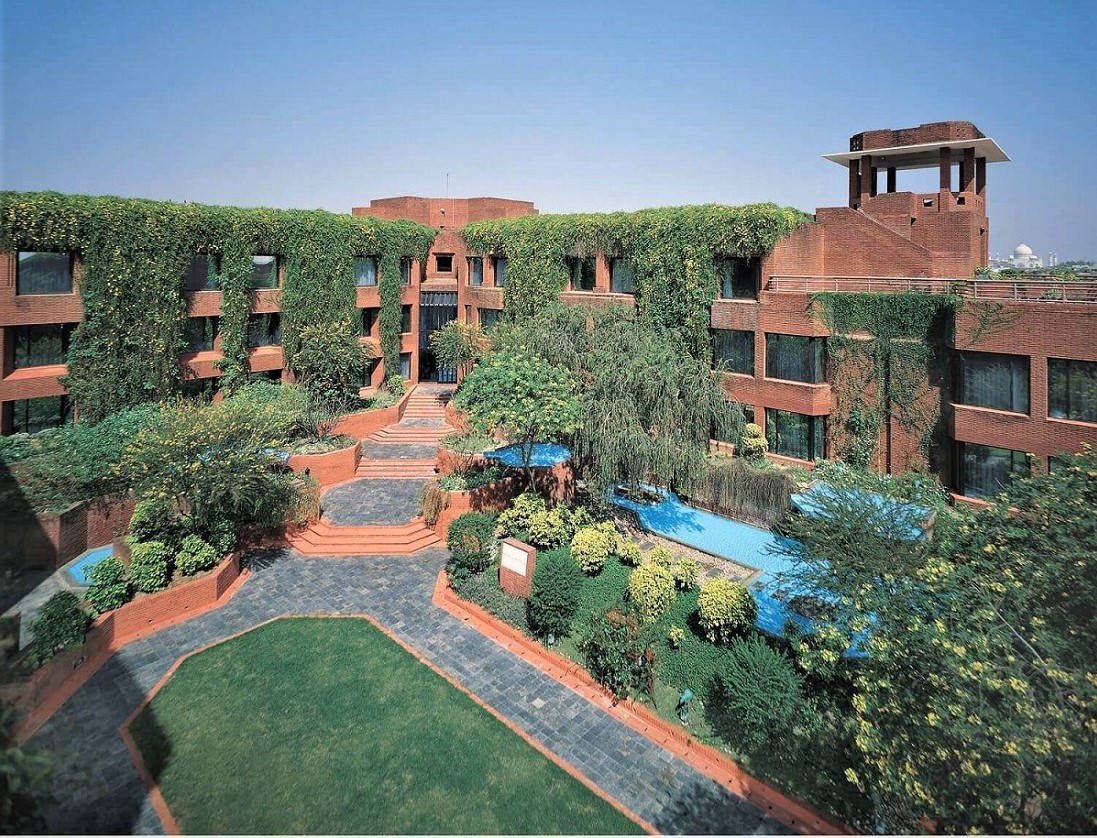 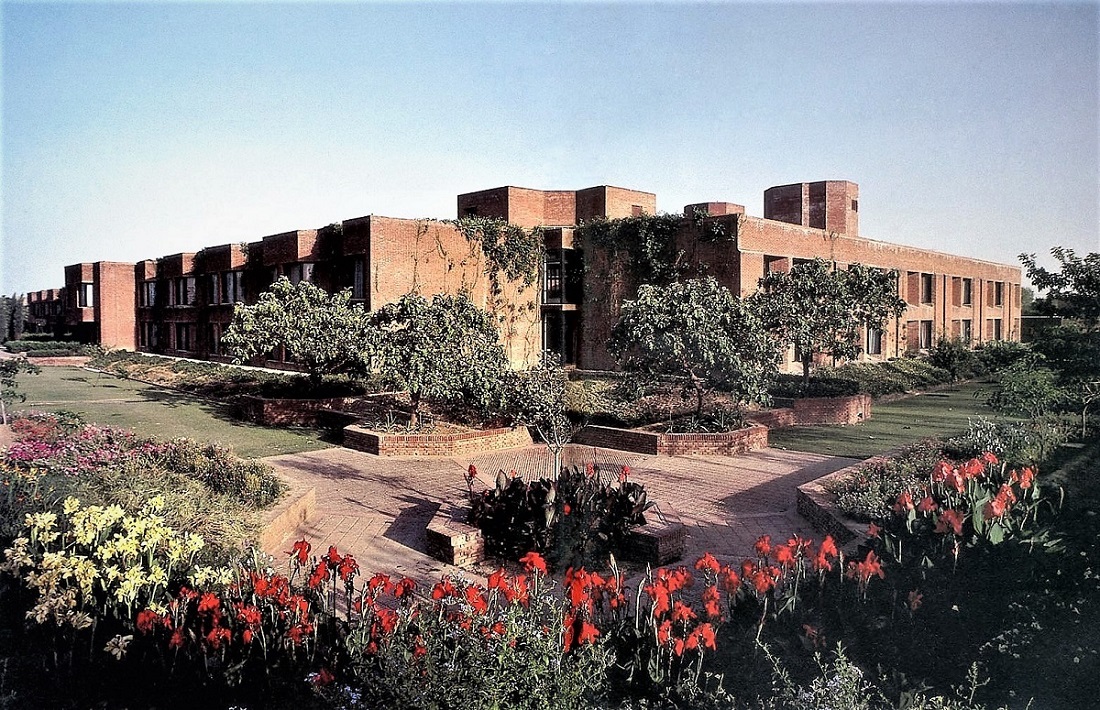 The main building of the hotel is placed at a set back from the approach road, and while approaching the hotel through a deep drive, one feels at once a sense of lush sanctuary. From the entrance canopy, the visitor is led, by a bridge, across a large reflecting pool, past fountains, and on to the lobby beyond. The built-form of the hotel has been kept low-height, predominantly two-storey, and fortress-like, and modest from exterior, reminiscent of Indian serais or travellers’ rest houses. The garden-oriented structure is intended to be a contemporary expression of traditional Mughal architecture with landscaping and water forms an integral part of the design. 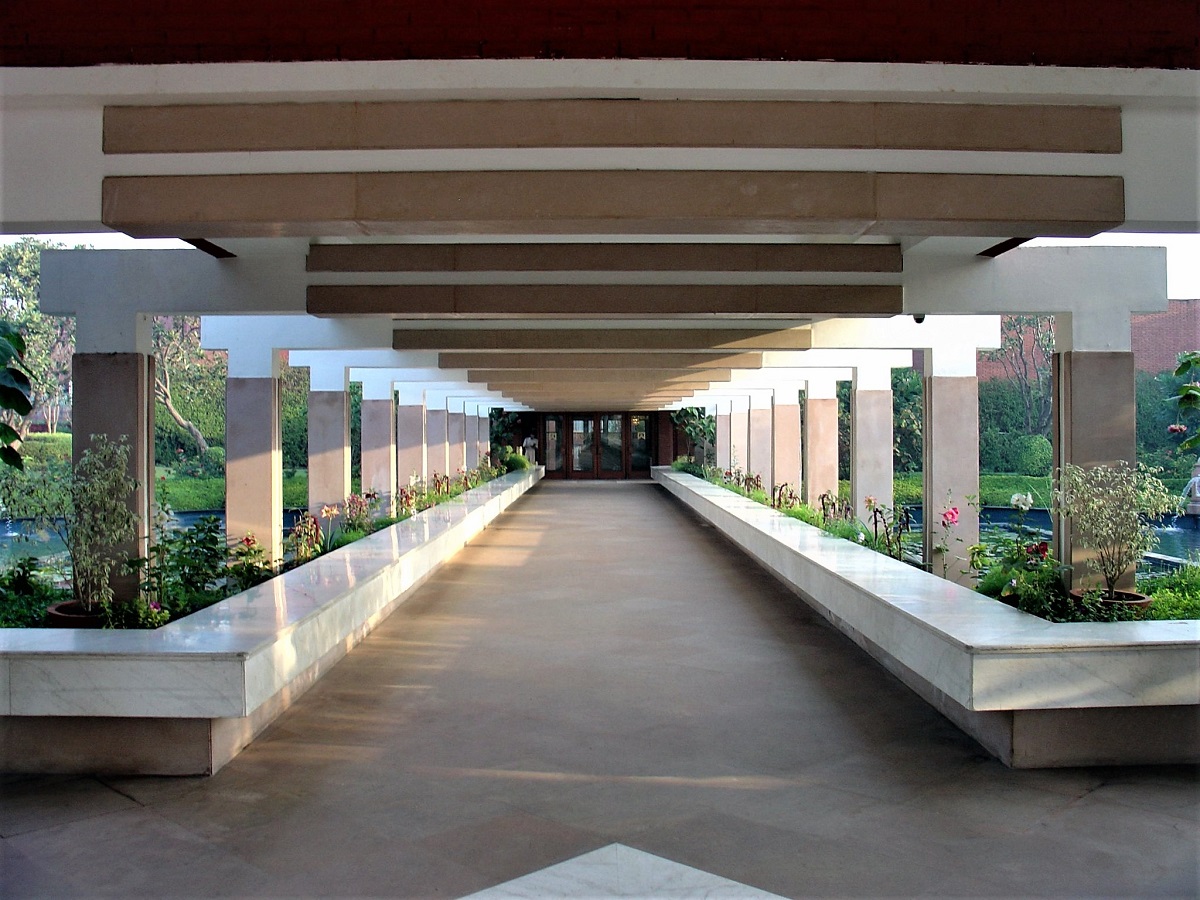 The primary focus of the complex is inward to the garden courts. From the room level, the courtyard gradually steps down, through a series of terraces, planters, pools, and fountains. Here, pools are used extensively, the largest designed as a swimming pool. A network of walkways weaves among the planters and pools, forming small terraces and seating areas, and linking various courts. In addition to the internal garden courts, the built-form is surrounded by two hectares of informal gardens which offer more recreational facilities. 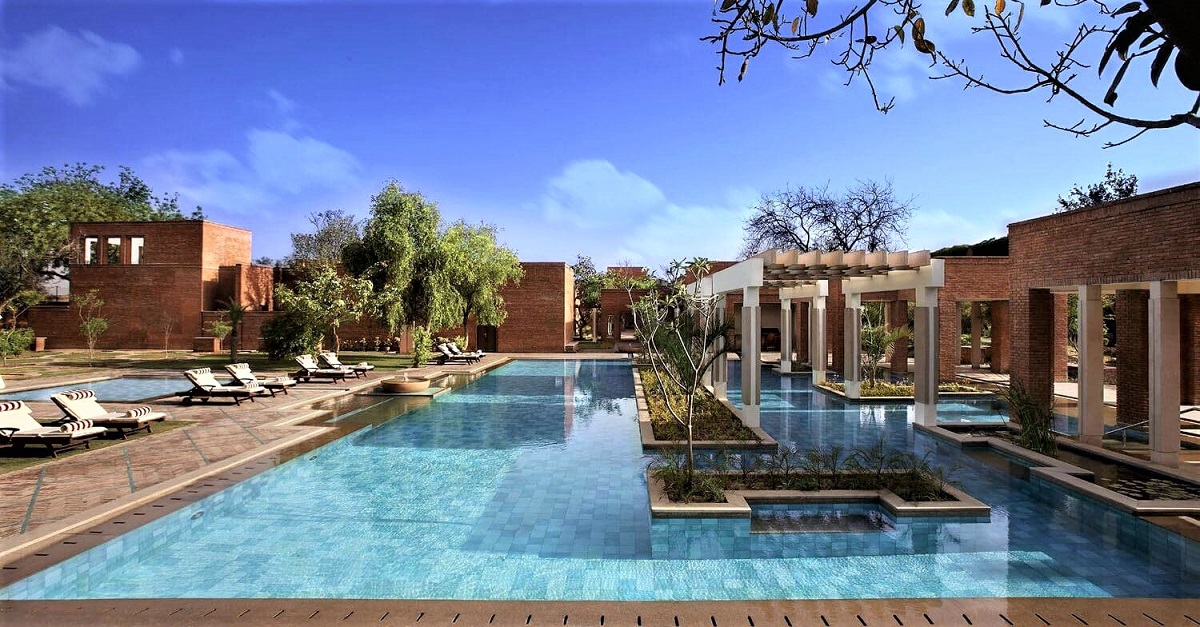 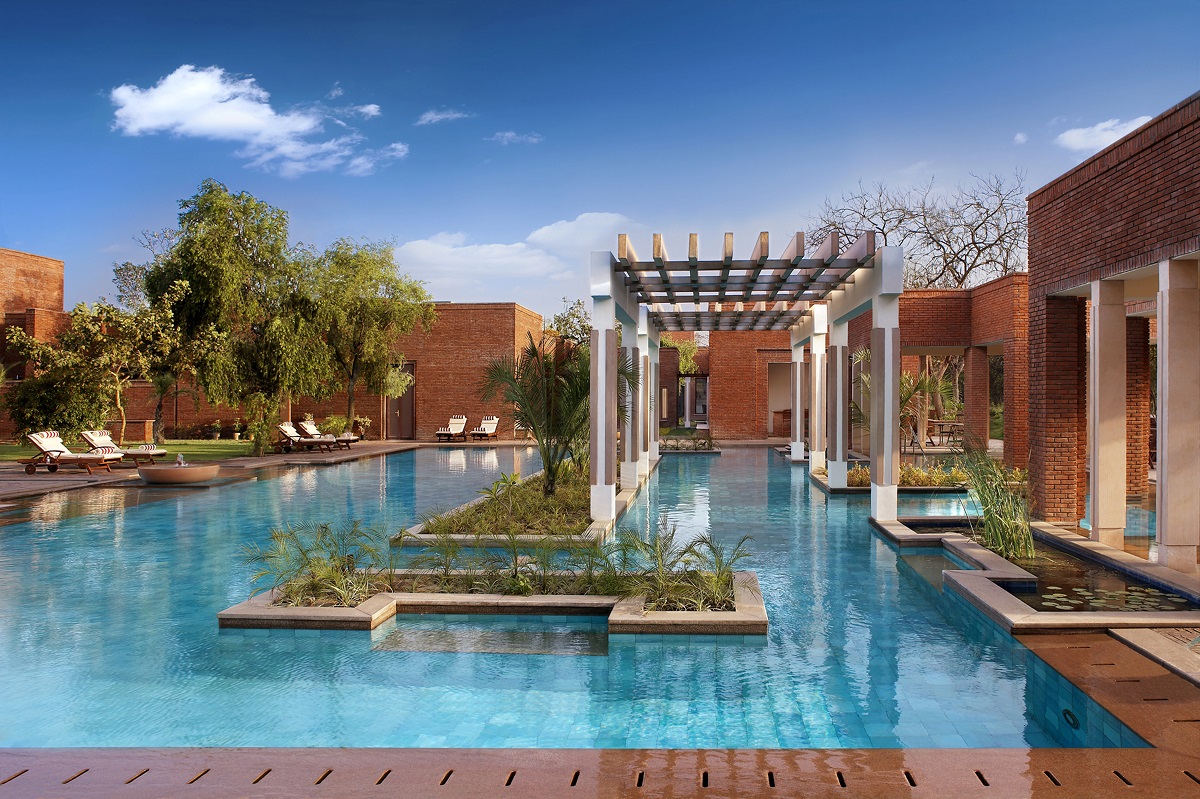 The hotel is conceived as an oasis in the hot and dusty environment of Agra. All guest rooms are oriented to take advantage of the cooling effects of the pools and gardens. Those facing north and south have bay windows, while those facing east and west have deeply recessed windows for protection from the sun. Thick brick masonry walls together with thick plantation around the complex also help in cutting off the heat of the sun. Most of the common areas in the public block have high ceilings and large windows to assure a view of the Taj Mahal and landscaped courts on the campus. These windows have been provided only in the north and east facades and are sheltered from the direct sun by a double-wall system consisting of a masonry screen wall wrapped around the primary concrete frame structure. The south and west facades have been kept largely blank. 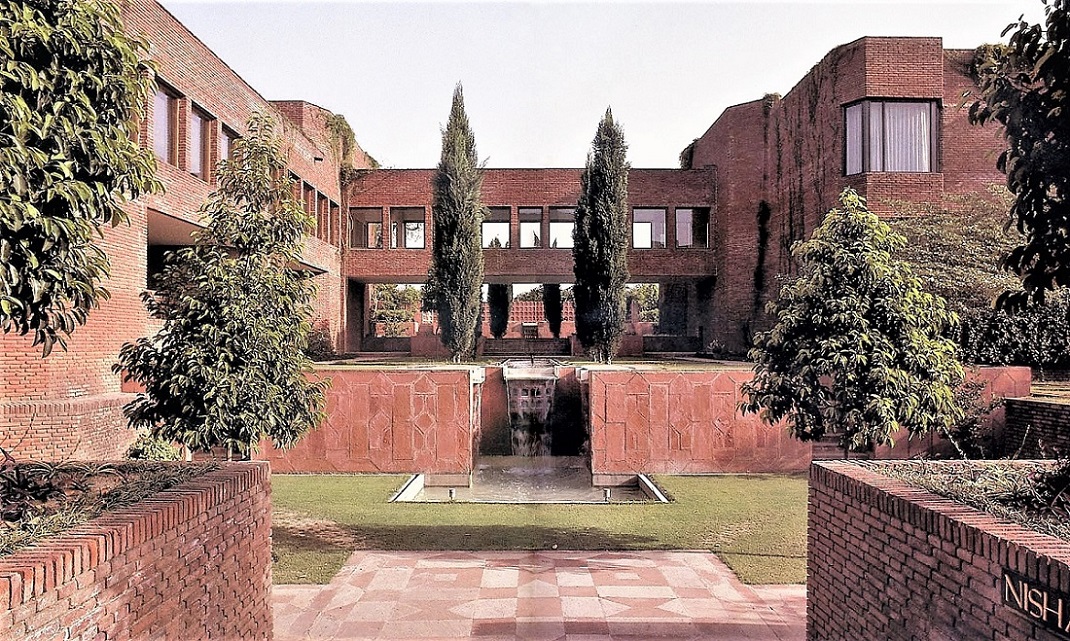 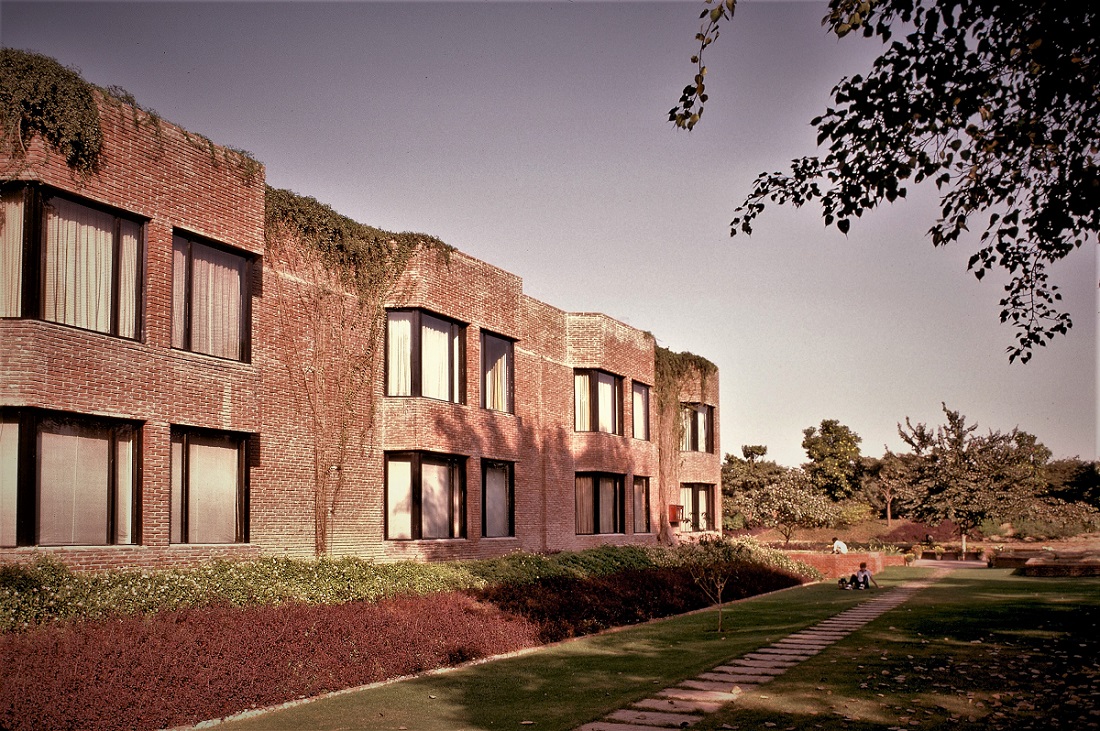 All the public areas and guest rooms are centrally air-conditioned. The mechanical distribution system consists of a network of underground service tunnels which loop around the complex, paralleling the circulation routes. Services are also grouped in shafts which form vertical massing elements. The separation of services facilitates access and simplifies maintenance.

The hotel was designed to avoid unnecessary dependence upon foreign technology, basing the structures and construction technology on the materials and skills readily available in the region at the time of construction. The basic structure for guest rooms is load-bearing brick masonry walls supporting concrete slabs. The central block of public spaces, the pedestrian bridges, and the service block, all of which require longer spans, are concrete-frame structures with concrete waffle slabs. Brick has been used as infill and as facing on the concrete. Paving material is white marble in public areas, slate and red sandstone in gardens, and carpeting in the guest rooms. The lodgings are finished with painted plaster, and the lobby walls are faced with marble. Door and window frames are in teak wood, and structural ceramic tiles are used for the planters and curbing. All materials, including the HVAC systems and architect-designed fabrics, are of Indian origin, and most were produced on-site. All work was done in the construction yard established on the site with the help of the domestic labour force which was primarily (80%) unskilled. 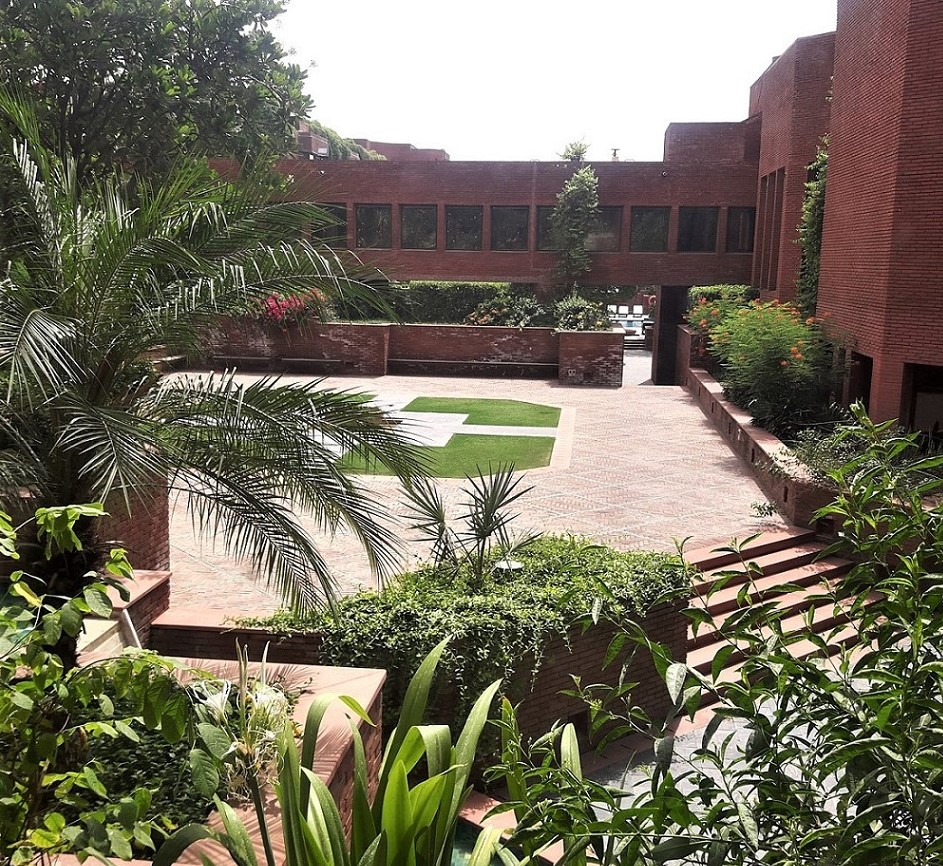 The Mughal Sheraton Hotel, while modern in vocabulary, with forms and shapes derived from functional use, expresses the culture and rich architectural traditions of the region. Basic structural elements of Mughal architecture have been revitalized and integrated into the complex: a sense of strength and grandeur, a contrast between outside and inside, a highly developed and sophisticated approach to the use of landscaping and water, open spaces and gardens, light and air as an integral part of the built-form. 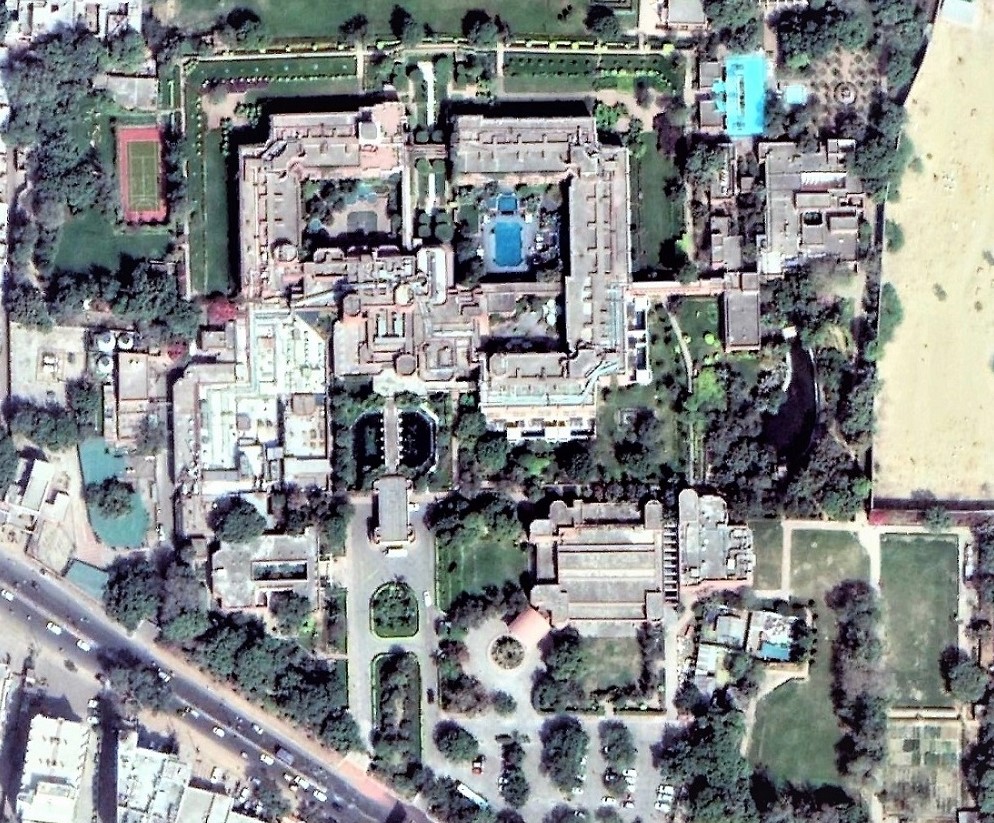 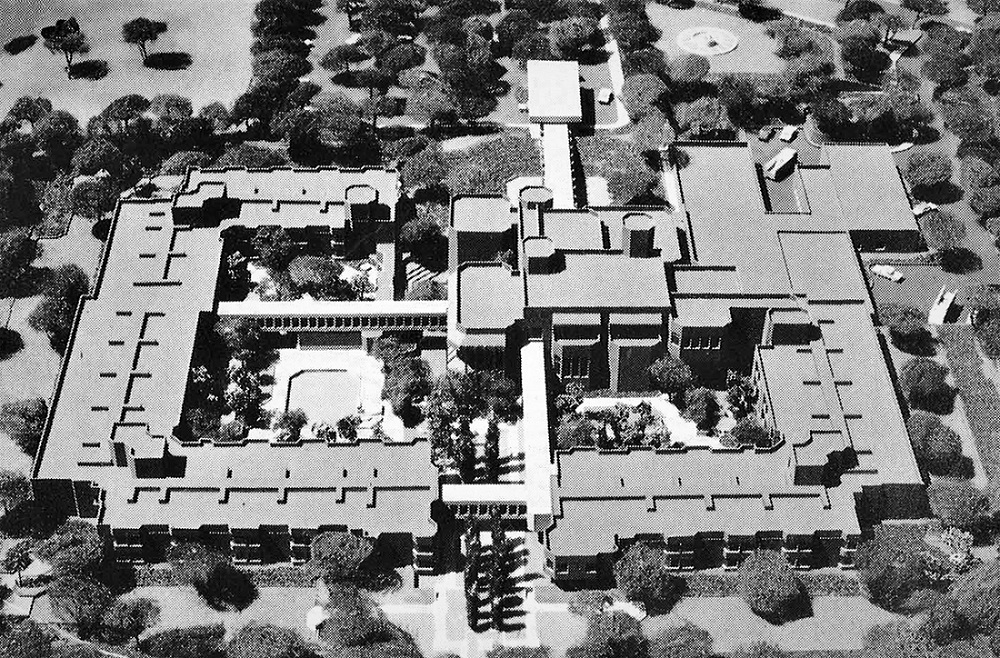 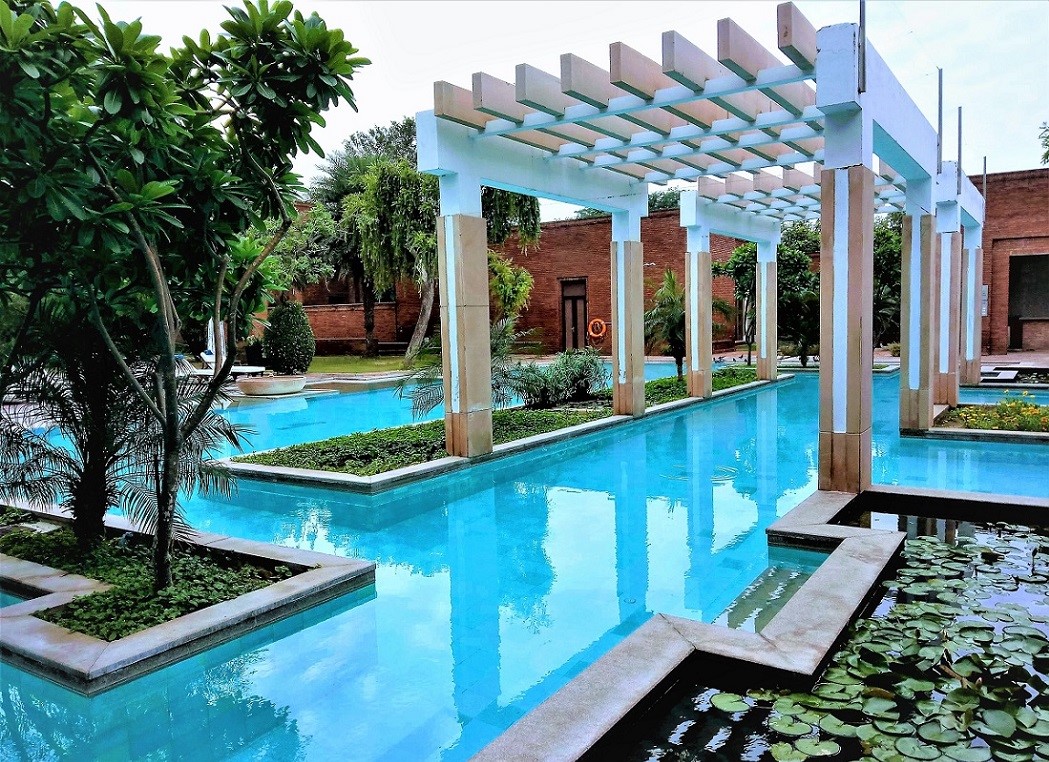 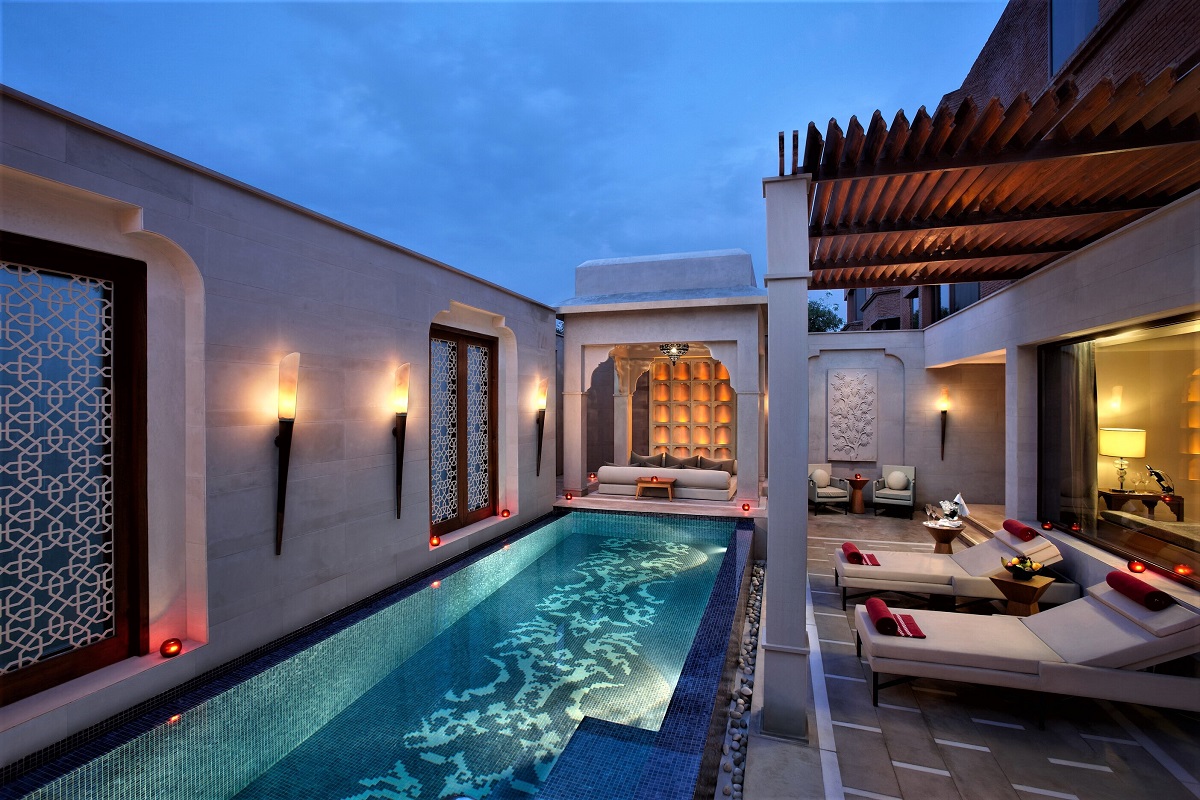 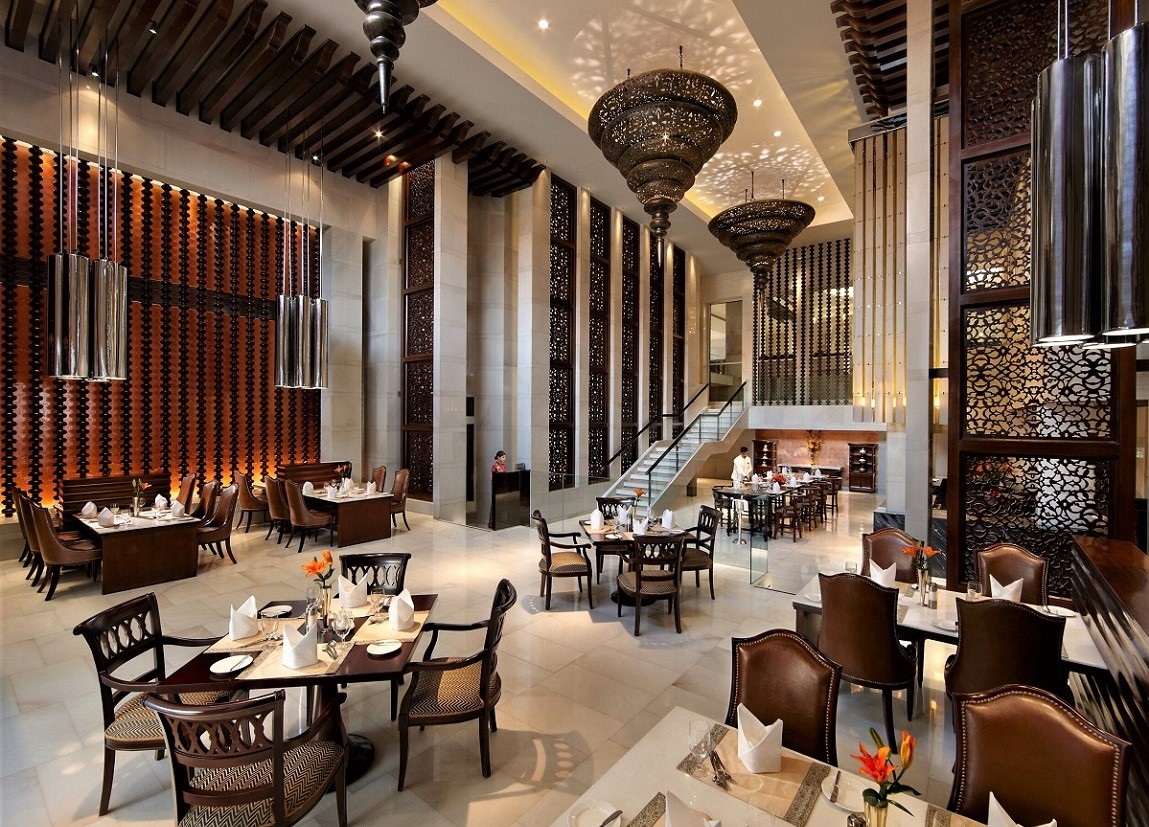