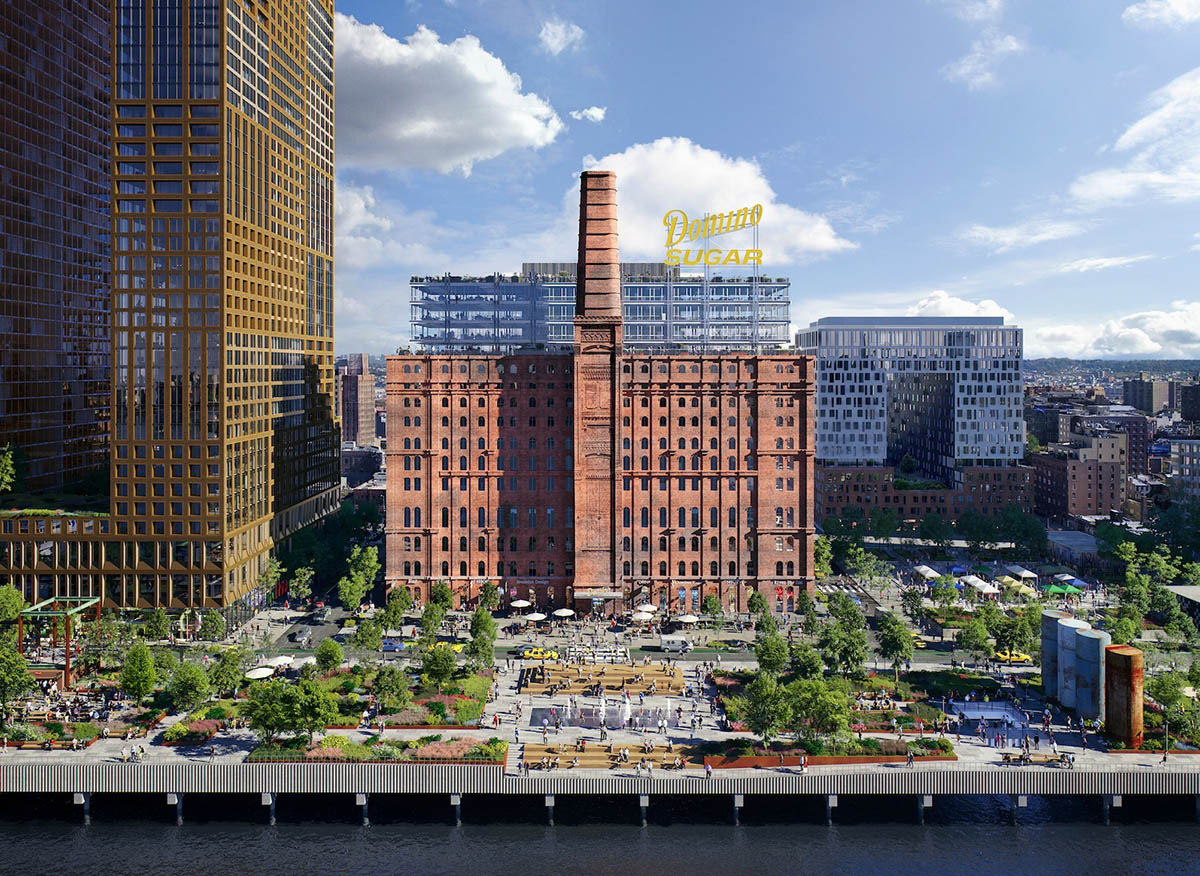 The Domino Park is planned to be opened to the public in summer 2018, announced by Two Trees. Six acres of parkland is the core part of redevelopment plan and it will revive the waterfront streched along the East River in the Brooklyn neighborhood of Williamsburg and it proposes easier access to waterfront with a new esplanade. 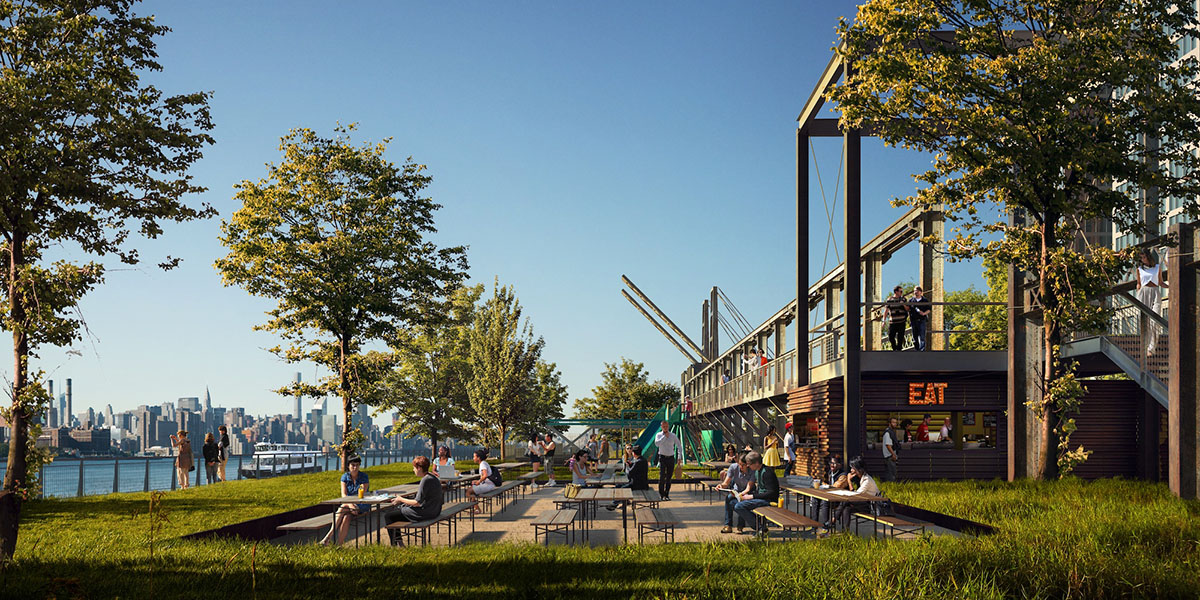 The major transformation includes the preservation of the historic derelict featuring the redbrick-coated former Domino Sugar Factory, is located on the north of Williamsburg Bridge.

For this historic transformation, James Corner Field Operations teamed up with New York-based firm Beyer Blinder Belle to overhaul the former Domino Sugar Factory. The new factory will be used as the 380,000 square feet (35,300 square metres) office space as part of the transformation. When considering the importance of the overall transformation plan, Two Trees draws an attention to the historic preservation of the site. Based on this, James Corner Field Operations preserves the original appearance of the Domino Sugar Factory within an ambitious mixed use development project.

''Inspired by community input and the site’s rich history, a quarter-of-a-mile public waterfront park will feature a 5-block long ''Artifact Walk'' that incorporates the original gantry cranes, syrup tanks, screw conveyors and other historical relics. The new waterfront park will offer a wide range of active and passive uses and will reconnect the neighborhood to the riverfront,'' said James Corner Field Operations. 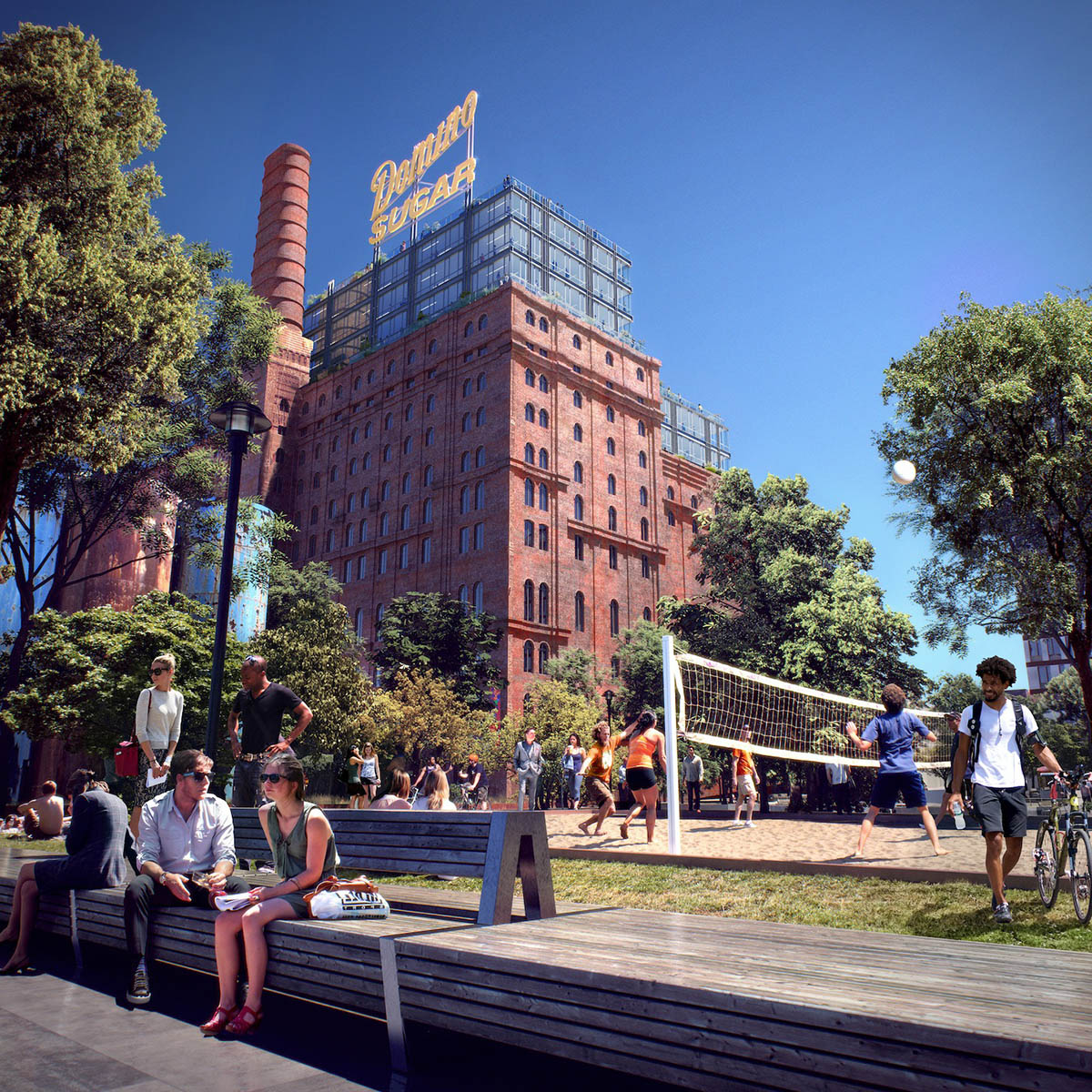 The Domino Sugar Factory is conceived as one of New York's iconic buildings, built in 1856 by the Havemeyer family. The building became the first of dozens of sugar refineries, contributing to the area’s emergence in the 19th Century as the industrial center of the Port of New York.

Sticking to these historic parameters, the team preserves 21 Raw Sugar Warehouse columns, nearly 600 feet of crane tracks, and 30 industrial artifacts, including 36-foot-tall syrup tanks that were used in the refining process, mooring bollards, and bucket elevators.

''The design of Domino Park aims to create a space that will revitalize the beauty of New York City’s incredible waterfront and foster interest in the history of the site and the surrounding neighborhood.''

SHoP Architects will design new five buildings at this site as part of a major plan, which will offer 2,800 rental apartments and 700 of them are designated as affordable.

The 10-year Domino Sugar Factory will provide 2,300 apartments, 500,000 square feet of commercial space, and a new school, when completed.