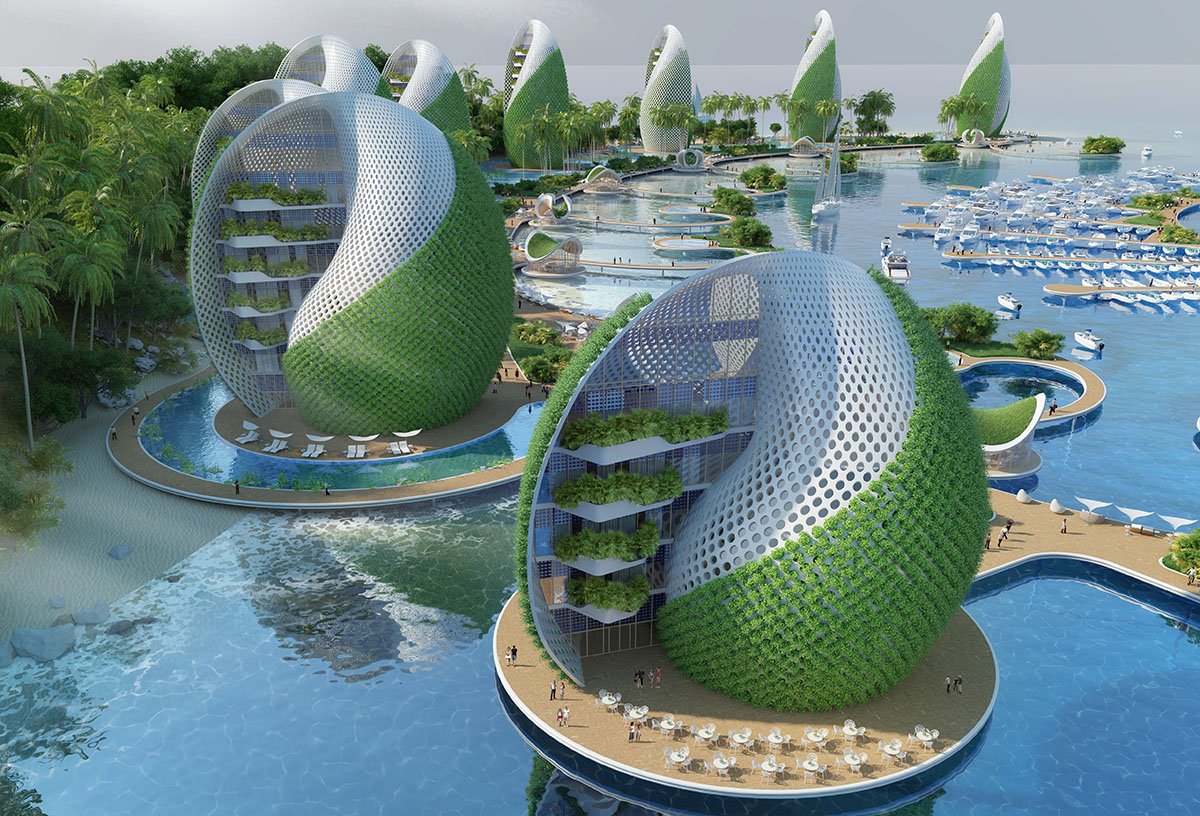 Vincent Callebaut's design scheme aims to create "zero-emission, zero-waste and zero-poverty" with these specially-designed structures, which will be built from reused and/or recycled materials from the archipelago. 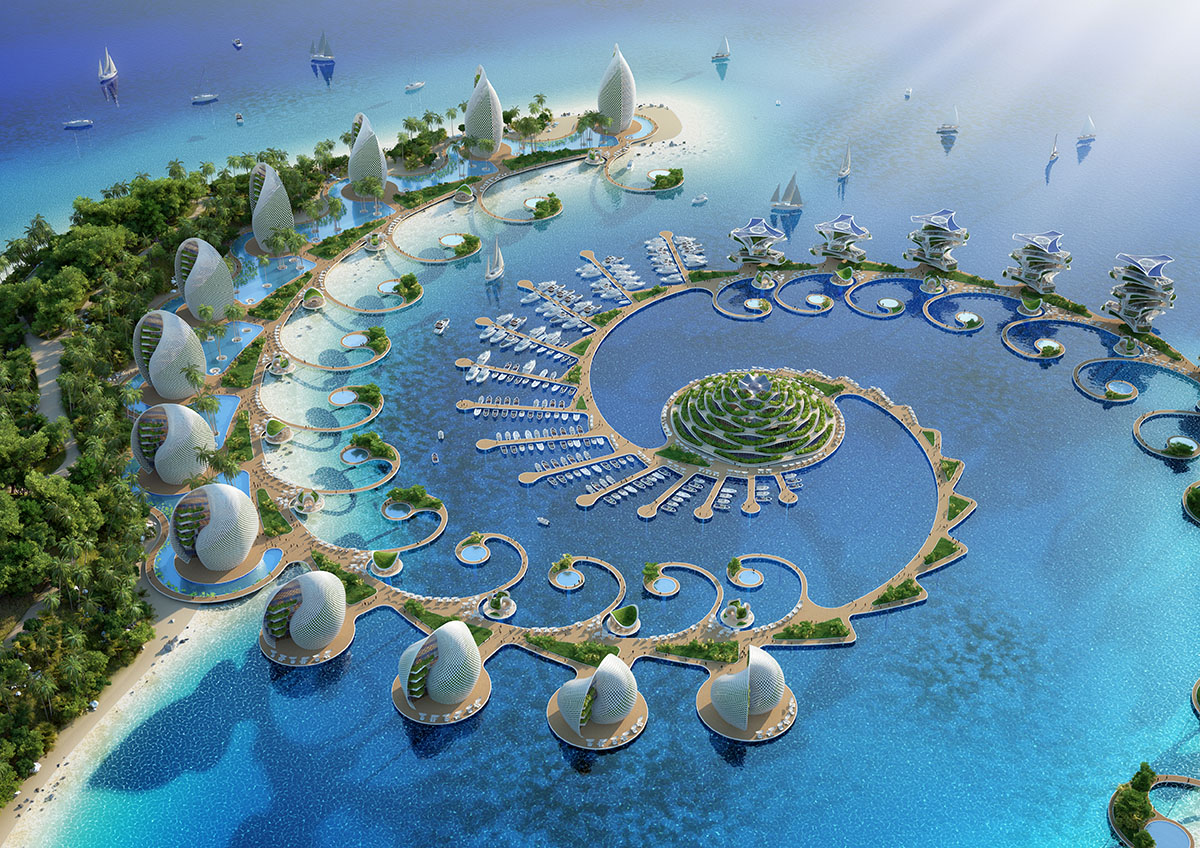 "The Philippine seas are severely threatened. Over-fishing, mass tourism, massive pollution of plastic waste and toxic products, as well as climate change present real threats to the health of the archipelago and, of course, the survival of its inhabitants," said Vincent Callebaut.

"Corals are dying, mangrove areas are being destroyed, sea-grass beds are suffocated by erosion, and vital populations of fish and other marine species are declining dangerously," he added.

"Tourism has become the most important industry at the international level. Its potential to contribute to sustainable development is therefore substantial and can be reinvented. Since the early 1980s, ecotourism has been exploring ways to reconcile the socio-economic development of our societies with the protection of the environment." 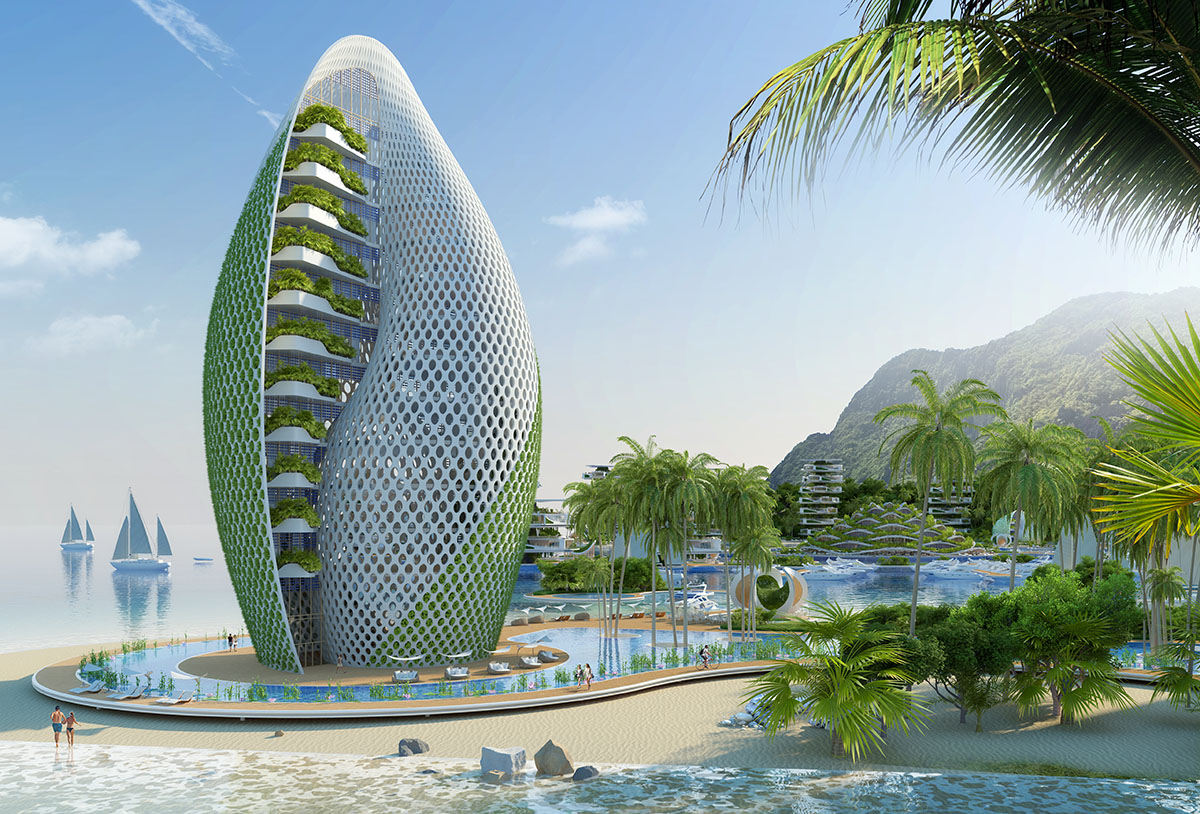 The Nautilus eco-resort complex is designed to unite the knowledge of the scientific community with the willingness of eco-tourists to optimize the revitalization and protection of a degraded ecosystem such as in the Philippines.

Based on biomimicry, the architectures of this eco-resort are inspired by the shapes, structures, intelligence of materials and feedback loops that exist in living beings and endemic ecosystems. 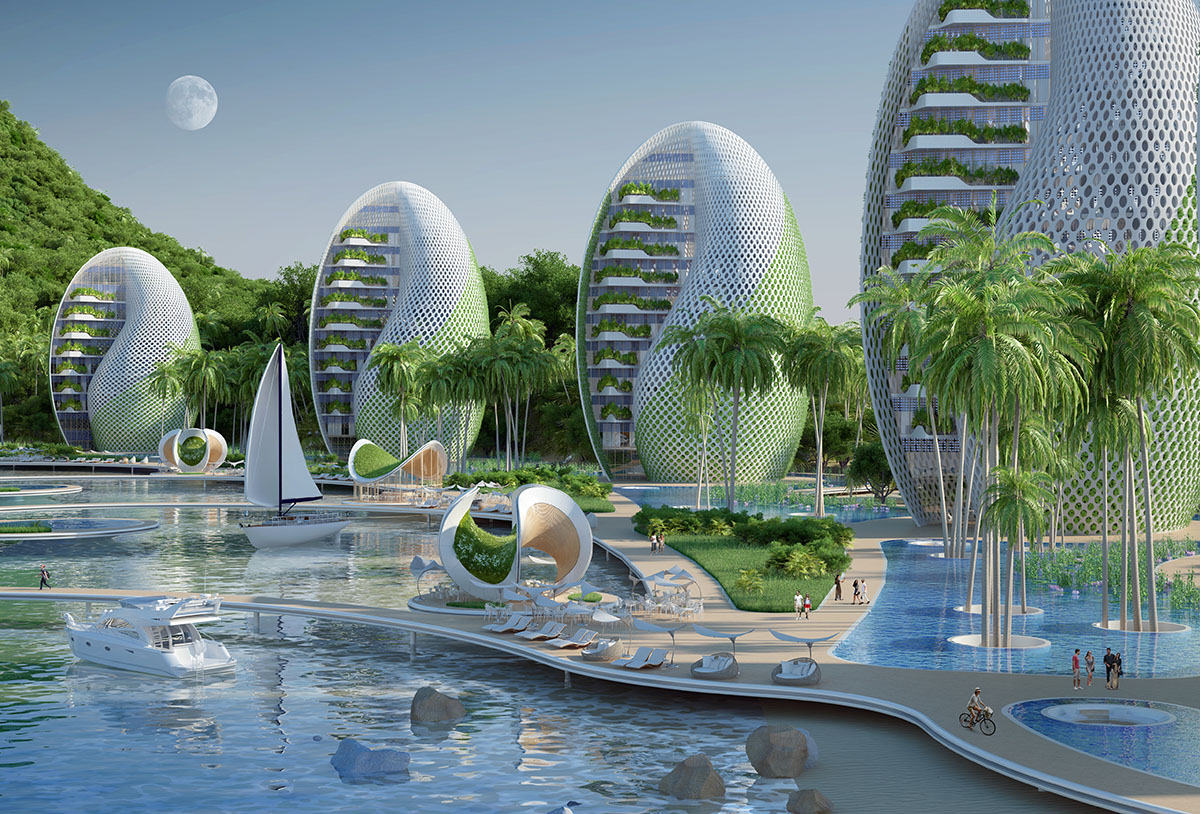 The architect designed a series of shell-shaped hotels and the rotating apartment towers to minimize the ecological footprint, and lined up these units along two golden spirals respecting the Fibonacci sequence, a symbol of balance and harmony.

The architect's aim is to create an experience centered on the preservation of nature and local urban ecology while respecting endemic ecosystems and agro-ecosystems. 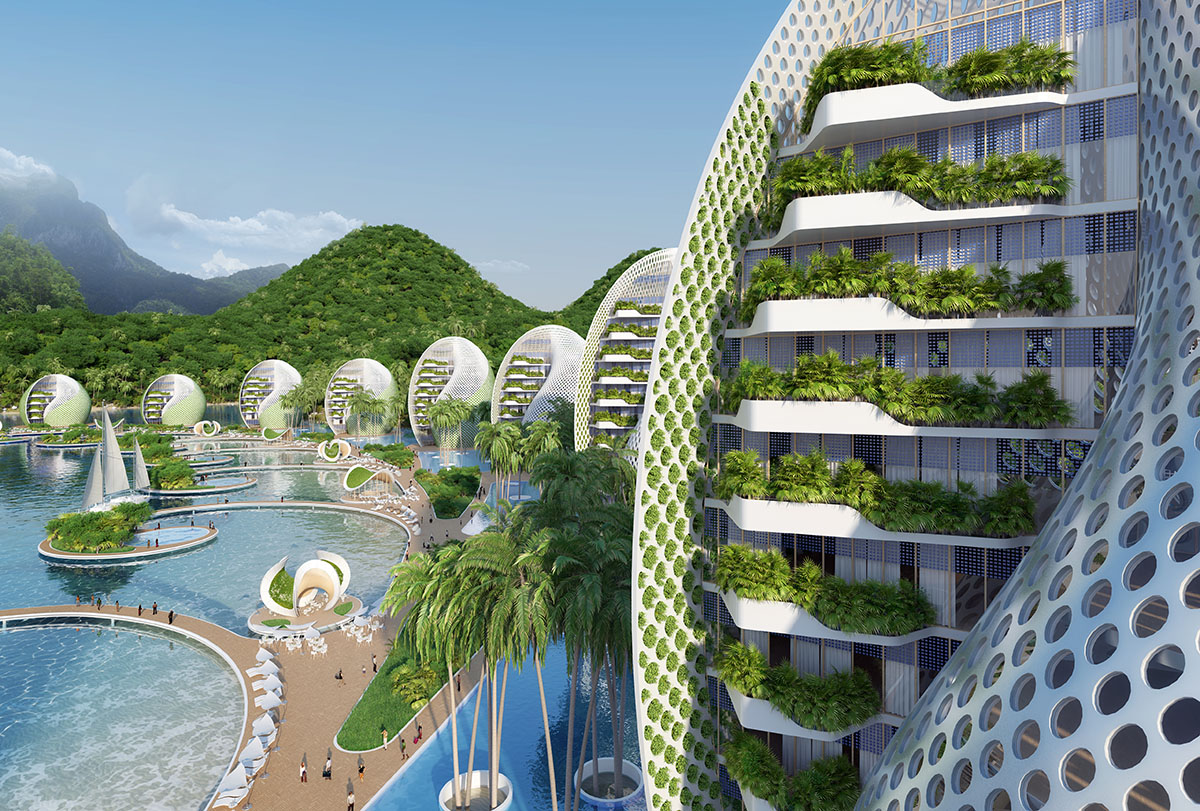 "Self-sufficient in energy and food, it will satisfy its needs thanks to renewable energies and permaculture. A zero-waste policy means that it will systematically upgrade its own waste into resources. Through a co-creation process, the eco-resort will contribute to the well-being of local communities by including them in its planning, development, and operation," explained the architect. 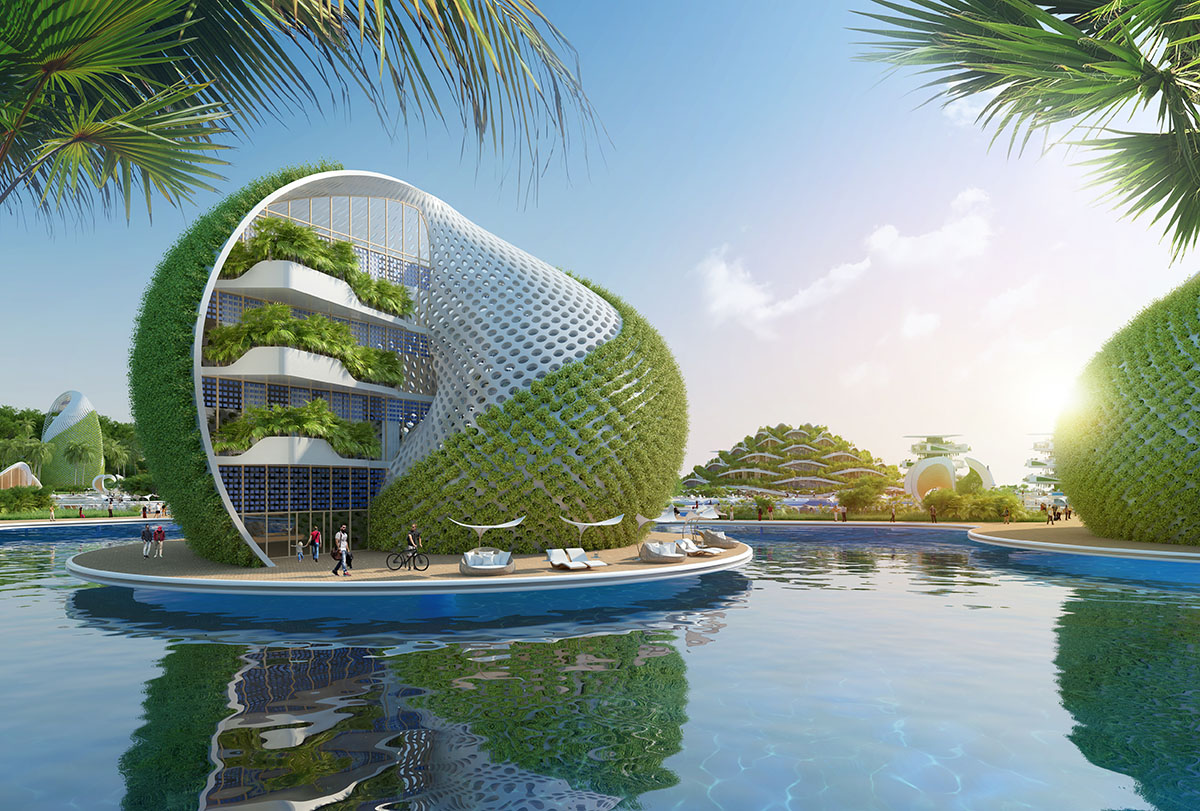 This sustainable village is built on telescopic piles that produce, on the one hand, ocean thermal energy by exploiting the difference in temperature between the surface and deep waters of the sea, and, on the other hand, tidal energy which exploits the marine currents in kinetic energy by capturing them using hydro-turbines.

Frigories for cool air and kilowatts for lighting are thus produced by renewable sources. The façades and roofs combine plant walls and photovoltaic cells to increase the thermal inertia of the building, optimize natural cooling, and generate electricity. Producing more energy than it consumes, the Eco-Resort thus achieves a positive energy balance. 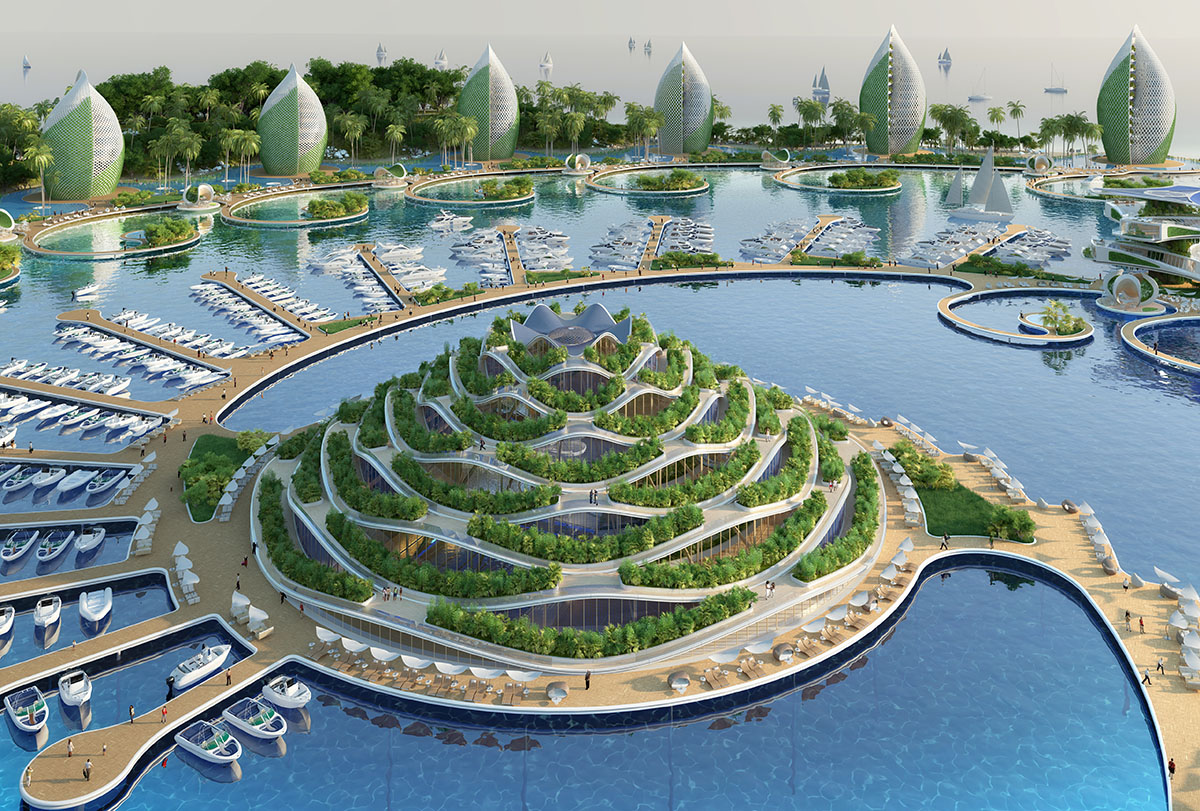 The added value of energy is thus redistributed in real time via a mini smart-grid to the local community, making them self-sufficient. Rainwater is used and the gray water is biologically recycled in waste stabilization ponds bordering the gardens, while organic waste is recycled into biomass.

To the East, 12 small spiral towers - called Rotating trickles - have varying heights inviting travelers to live in apartments and turning on their axis and following the course of the sun. 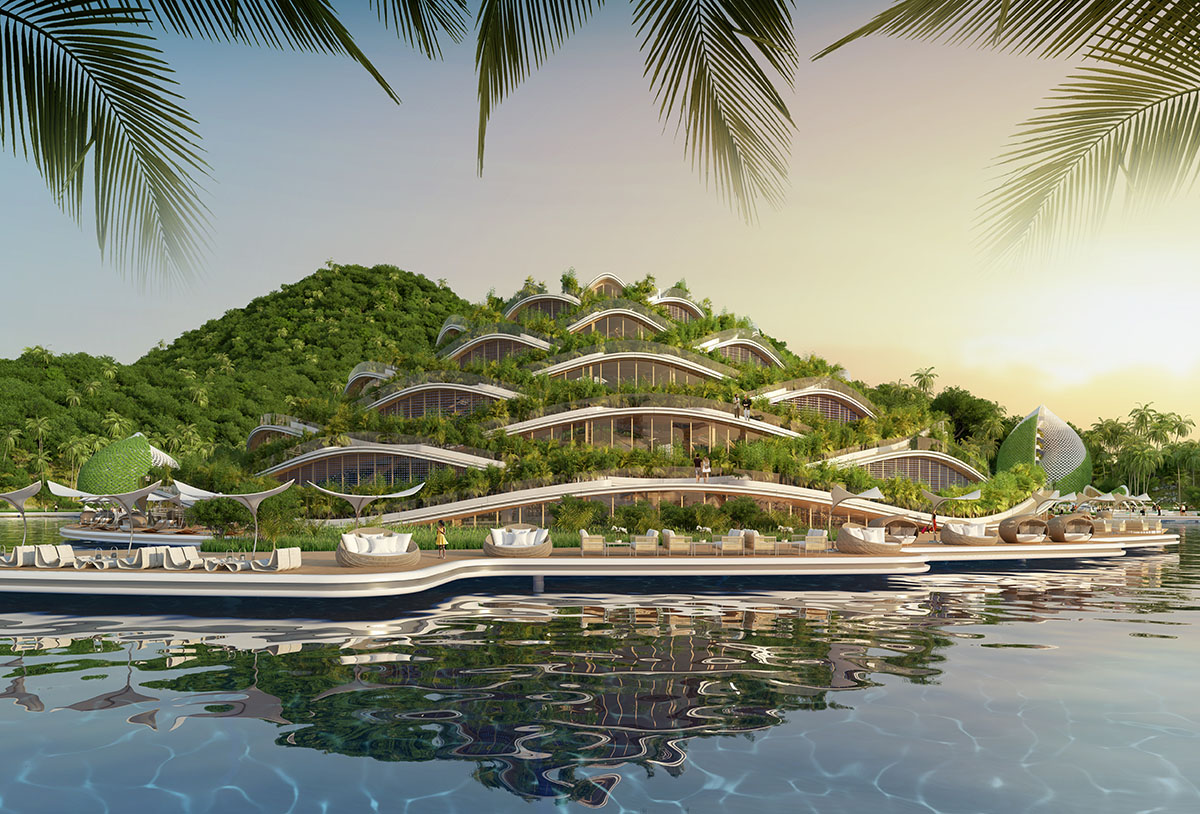 Distributed in three branches, the 54 modules of three dwelling units fully rotate 360 degrees in one day. The 162 apartments offer exceptional views towards the landscape.

The facades are adjusted surfaces integrating ramps to access the panoramic terraces. The central mat incorporates the vertical circulation and is covered with lush vegetation walls. At the top, a triskel roof also integrates solar tubes producing hot water and photovoltaic pergolas. 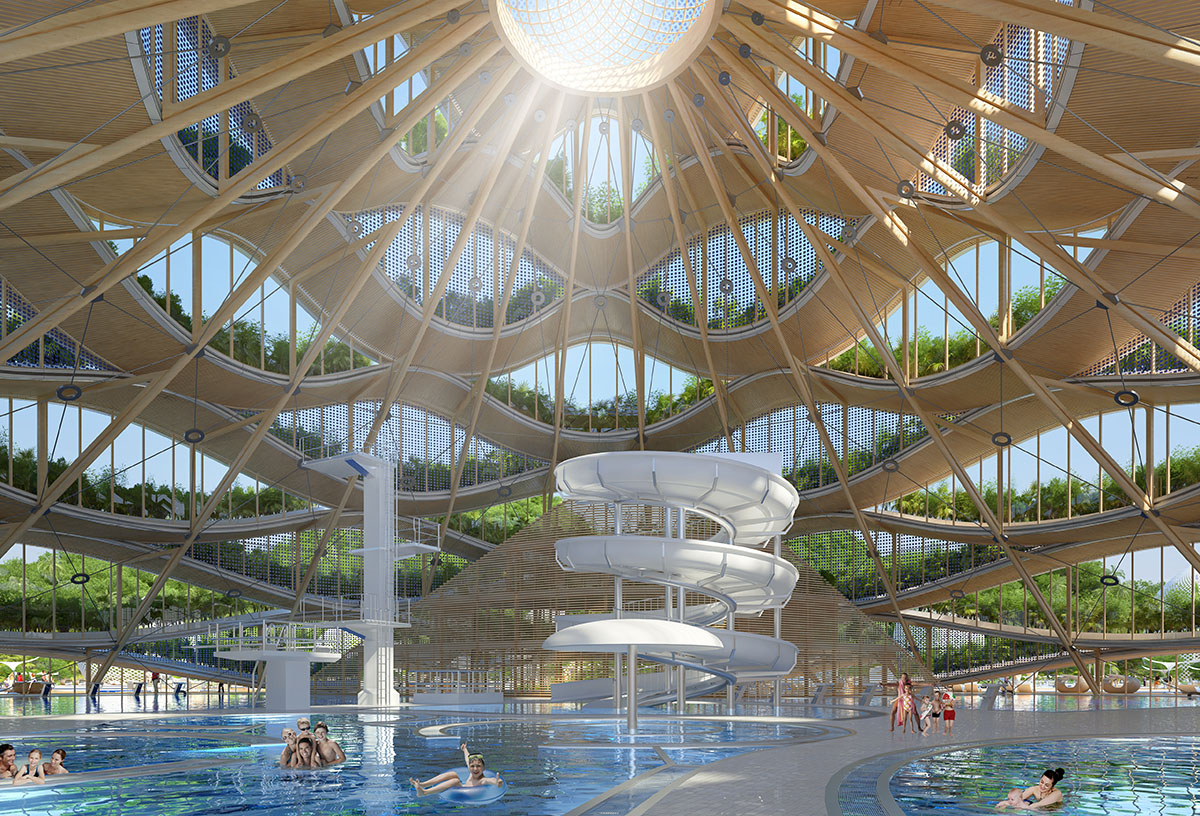 To the West, the architect created 12 small museum-hotels in the form of a sea snails seem to emerge out of the water. On the lower floors, there are exhibition spaces explaining in particular the environmental and socio-cultural challenges of the archipelago.

These 12-living nautiluses feature a self-stable shell covered with vegetable essences that are to be protected on the island. Their two openings form funnels and are closed by curtain walls, incorporating silicon cells in imposts and green balconies in cascades. 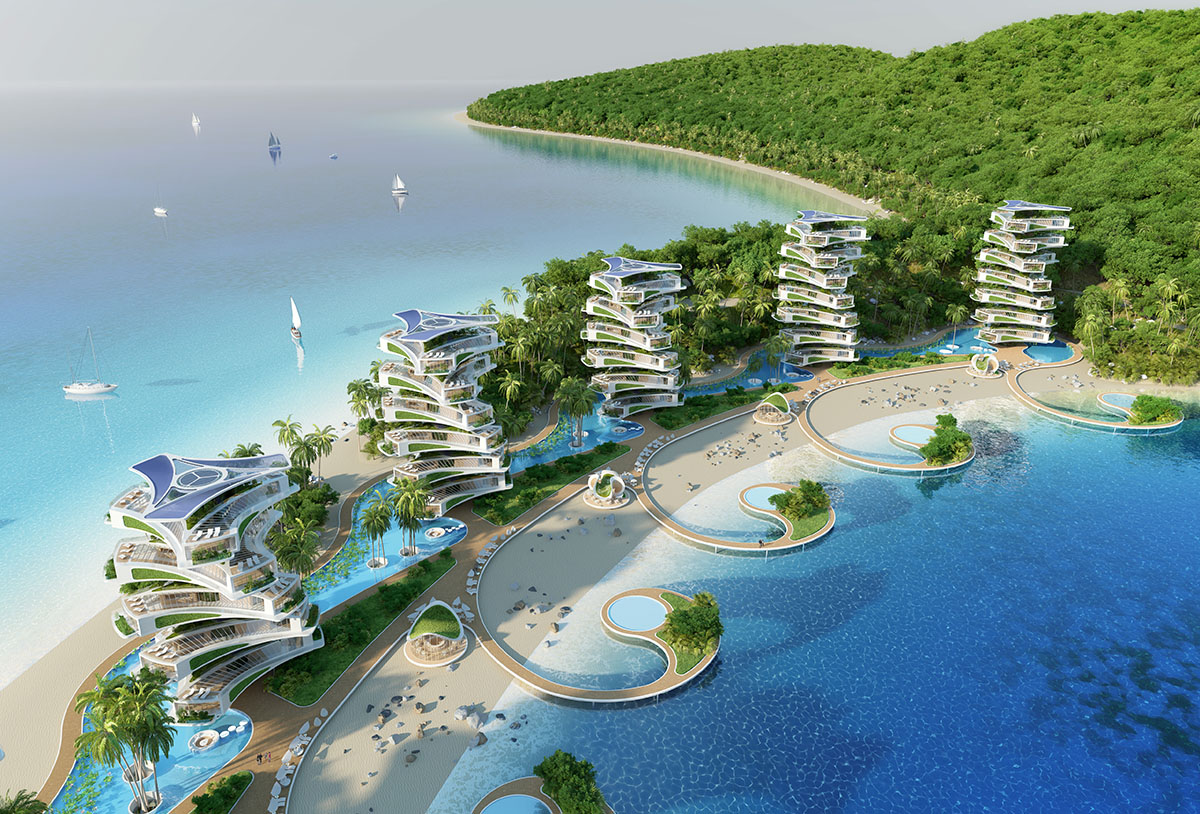 In the center of the lagoon, the scientific research center and the nautical recreation base are located under a CLT (Cross Laminated Timber) framework.

This is covered with 360 degrees of undulating ramps unfolding like giant origami. On the roof, there are vegetable gardens and organic orchards supplying, in short circuit, the kitchens of the restaurants of the eco-resort. Vincent Callebaut is planning to create a crowdfunding campaign to collect funds for the site's conservation with the association of preservation of fauna and flora. 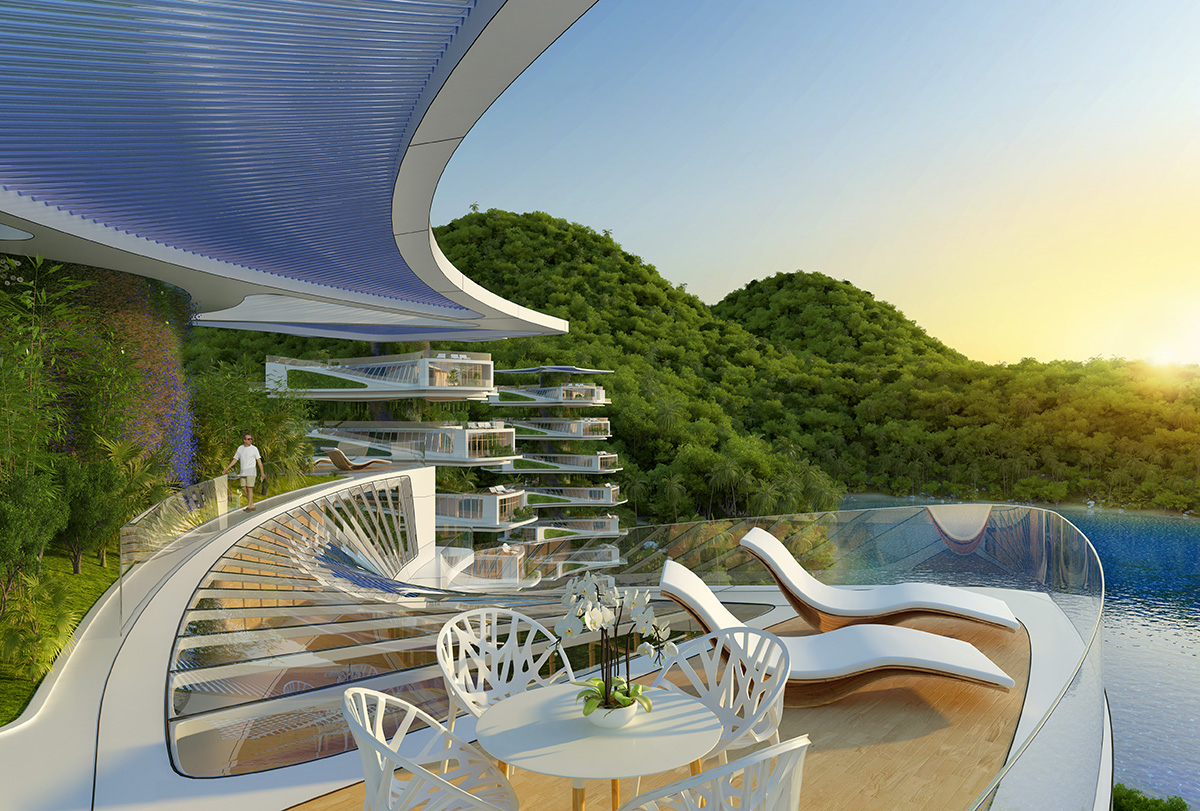 "It will directly support local economic development in the form of jobs and income. Finally, it will encourage respect for the archipelago's different cultures," he added.

"It is above all a project made to exchange and transmit ecological gestures between the natives and the newcomers. It will ask volunteer ecotourists to clean the washed-up plastic waste from beaches, put in place cradle to cradle recycling schemes, learn permaculture, protect coral crops, restore reasonable fishing, which will allow nature to regenerate, or strengthen natural protection against flooding."

Vincent Callebaut's main design philosophy is based on proposing long-tem solutions for large-scaled developments considering the current situations of any country.

Manta Ray project is only one of them unveiled in July this year - the architect proposed a permeable floating landscape to recover natural environment of Seoul's Yeouido Han River Park between the Mapo Bridge and the Wonhyo Bridge, which aims to enhance the site's natural irrigation by transforming the park into an ecological forest of willow trees.