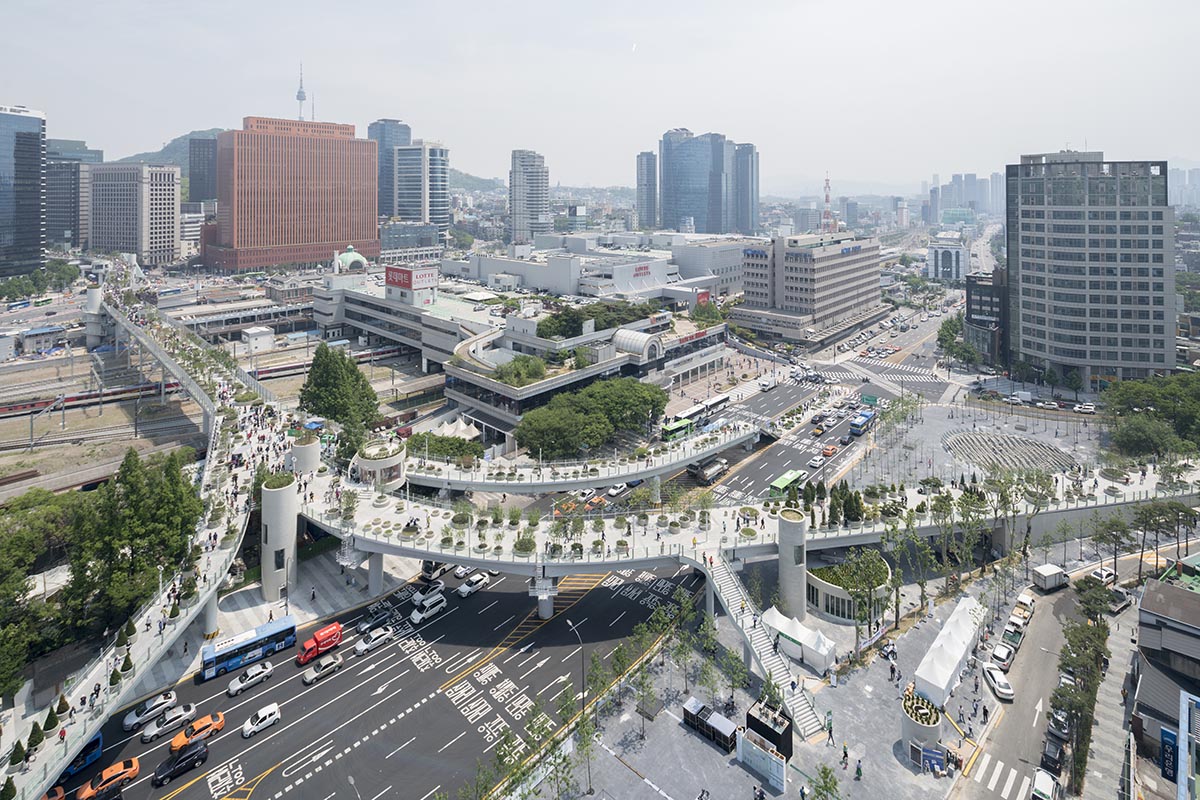 MVRDV's new Seoul Skygarden - also called Seoullo 7017 - will catalyse the centre of Seoul with its 24,000 plants placed over this floating walkway, has been officially opened to the public today. Following a winning competition proposal in 2015, MVRDV has transformed Seoul's 1970's disused overpass into a giant public garden, featuring a matrix of Korean flora on the 16m elevated steel and concrete structure.

MVRDV's fundamental design approach for the Seoul Skygarden was "to change the daily life of thousands of people who cross Seoul’s city centre every day." The world-renowned Dutch studio aimed to revive the forgotten and existing infrastructure into a green symbol that will become a catalyst for a greener quarter for Seoul. 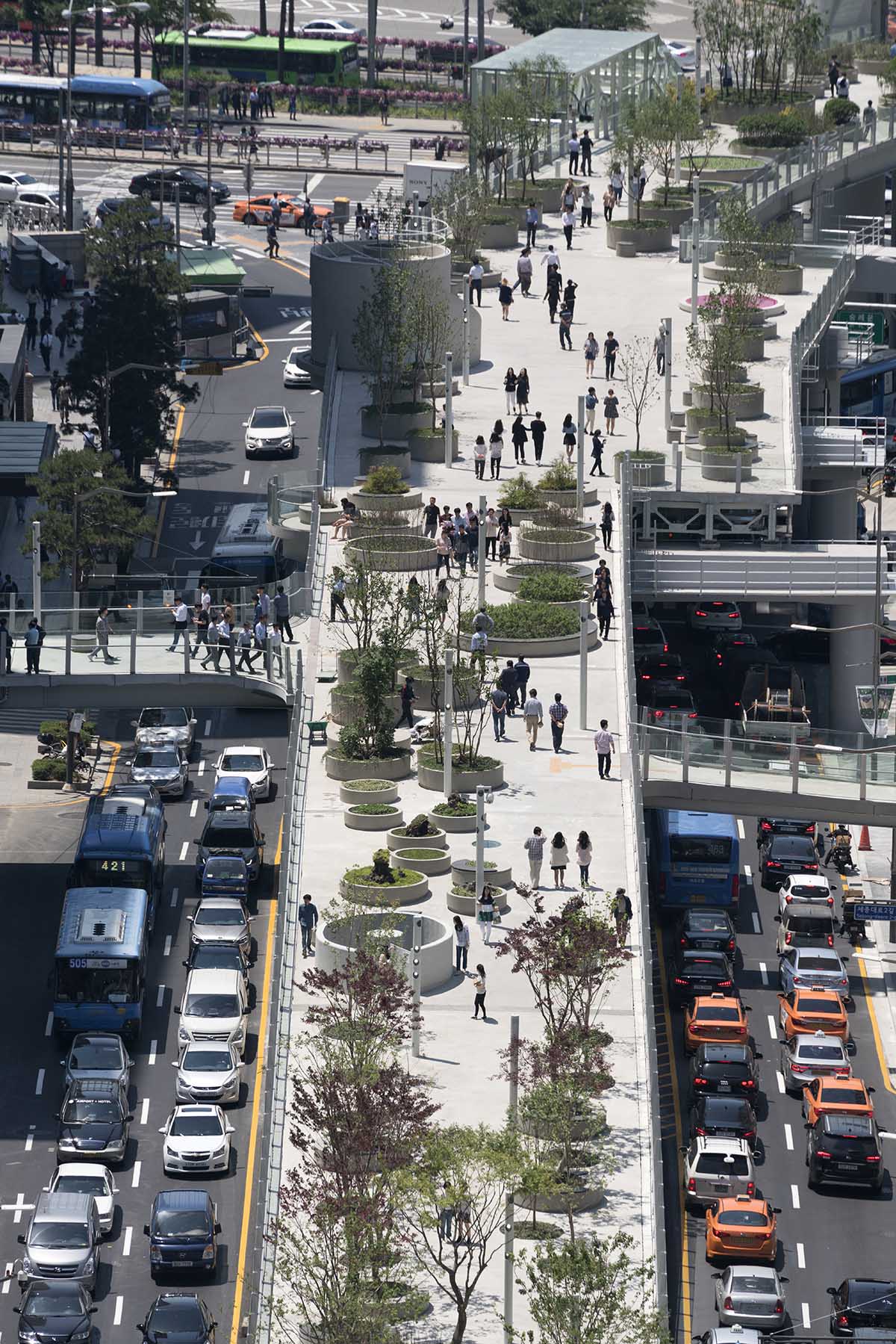 Developed with the municipality, local NGO’s, landscape teams and city advisers, the city now embraced a diverse range of floras within a new floating walkway with its wrapping structure, presenting a new urban condition for the city.

A 983-metre botanical floating bridge is not only a pedestrian walkway featuring different species on it, the mega-bridge is connected to several parts of the city with multiple stairs, lifts and escalators and it connects the city to the new park, rebounding it to the adjacent urban fabric. Underneath the bridge, there are shops, galleries, tea houses, a theatre, information centres, maintenance boots and restaurants, which make the bridge more liveable and vivid. 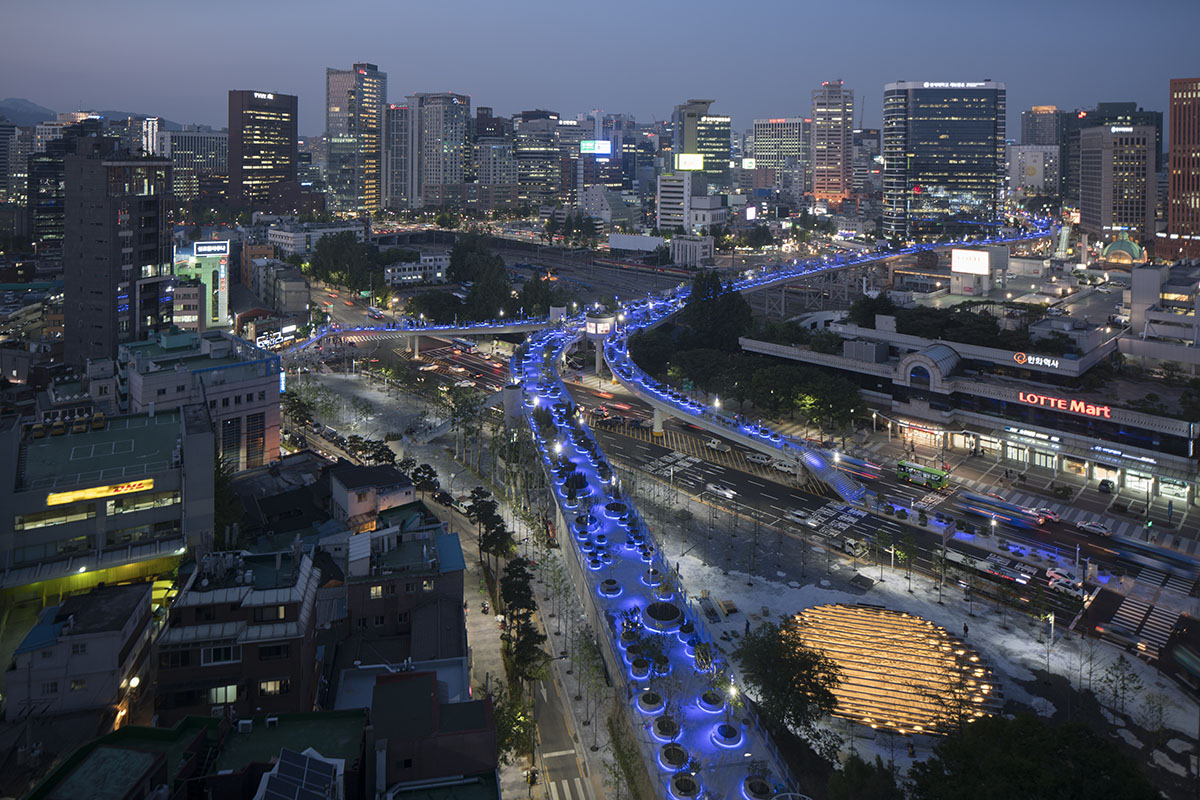 Skygarden can be accessed 24/7 and is illuminated at night

Defined by MVRDV as "a true plant village", the Seoullo 7017 draws the attention of visitors with its rich plant library including over 200 local species of trees, shrubs and flowers, which is presented as "a walkable plant library for residents and visitors to the city."

MVRDV gathered 50 families of plants for this super-bridge and displayed in 645 tree pots, collecting around 228 species and sub-species. "In total, the park will include 24,000 plants (trees, shrubs and flowers) that are newly planted many of which will grow to their final heights in the next decade," stated MVRDV. 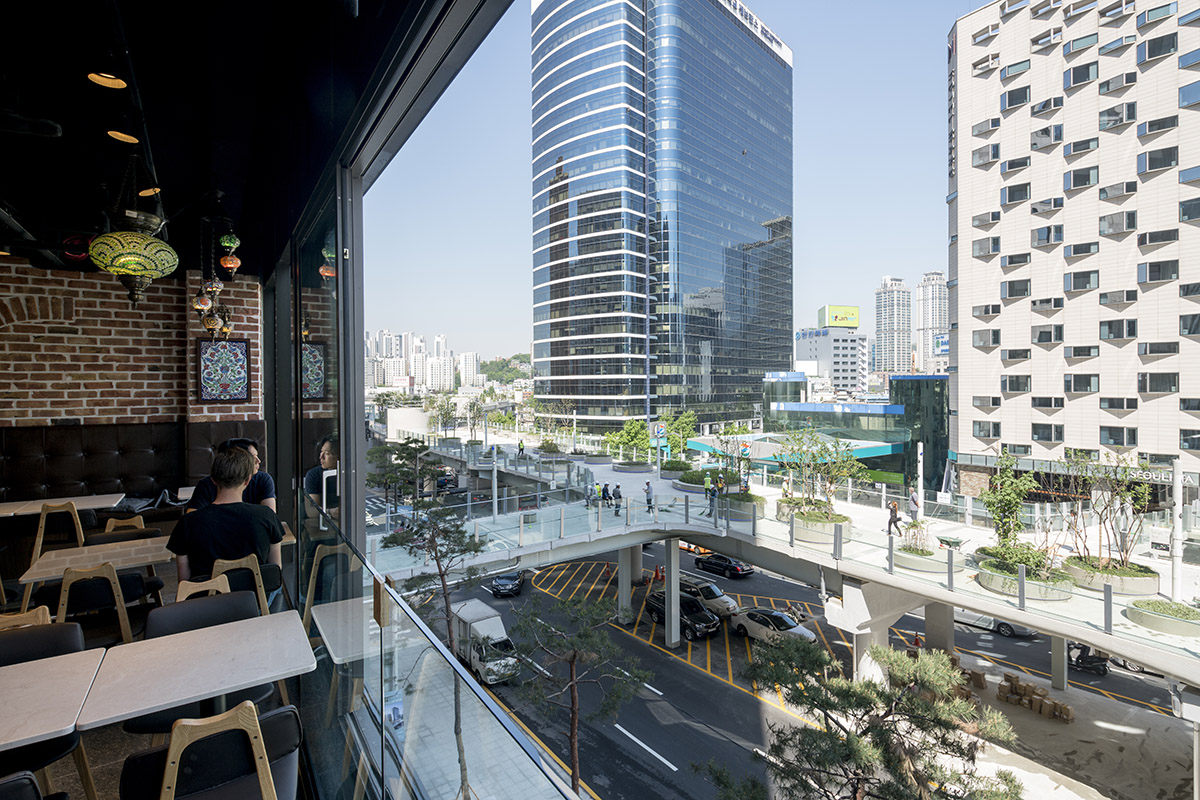 "Seoullo, the Korean name for Skygarden translates to 'towards Seoul' and 'Seoul Street', while 7017 marks the overpass' construction year of 1970, and its new function as a public walkway in 2017."

"The pedestrianised viaduct next to Seoul's main station is the next step towards making the city and especially the central station district, greener, friendlier and more attractive, whilst connecting all patches of green in the wider area," added the studio.

"Skygarden offers a living dictionary of plants which are part of the natural heritage of South Korea", said Winy Maas, MVRDV co-founder, said in his introduction speech today. 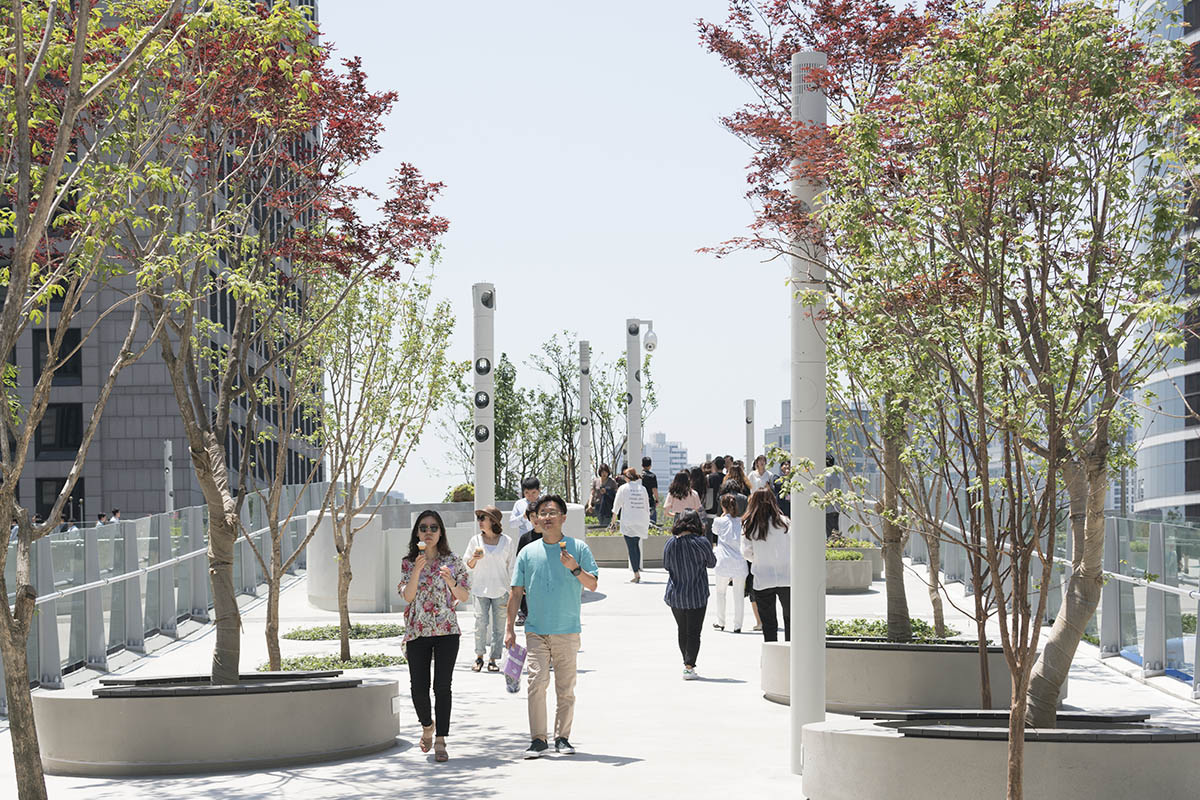 "Our design offers a living dictionary of plants which are part of the natural heritage of South Korea and now, existing in the city centre. The idea here is to connect city dwellers with nature, while at the same time also offering the opportunity of experiencing these amazing views to the Historical Seoul Station and Namdaemun Gate," said Winy Maas, founding partner of MVRDV.

Skygarden is an educational arboretum, a nursery for future species and one that in the future will act as a garden which can extend to other parts of Seoul as the plants grow and are transferred to new homes", added Winy Maas.

"They are planted in containers of different size and height and organised in groups of families. The families are ordered according to the Korean alphabet. This leads to surprising spatial compositions". 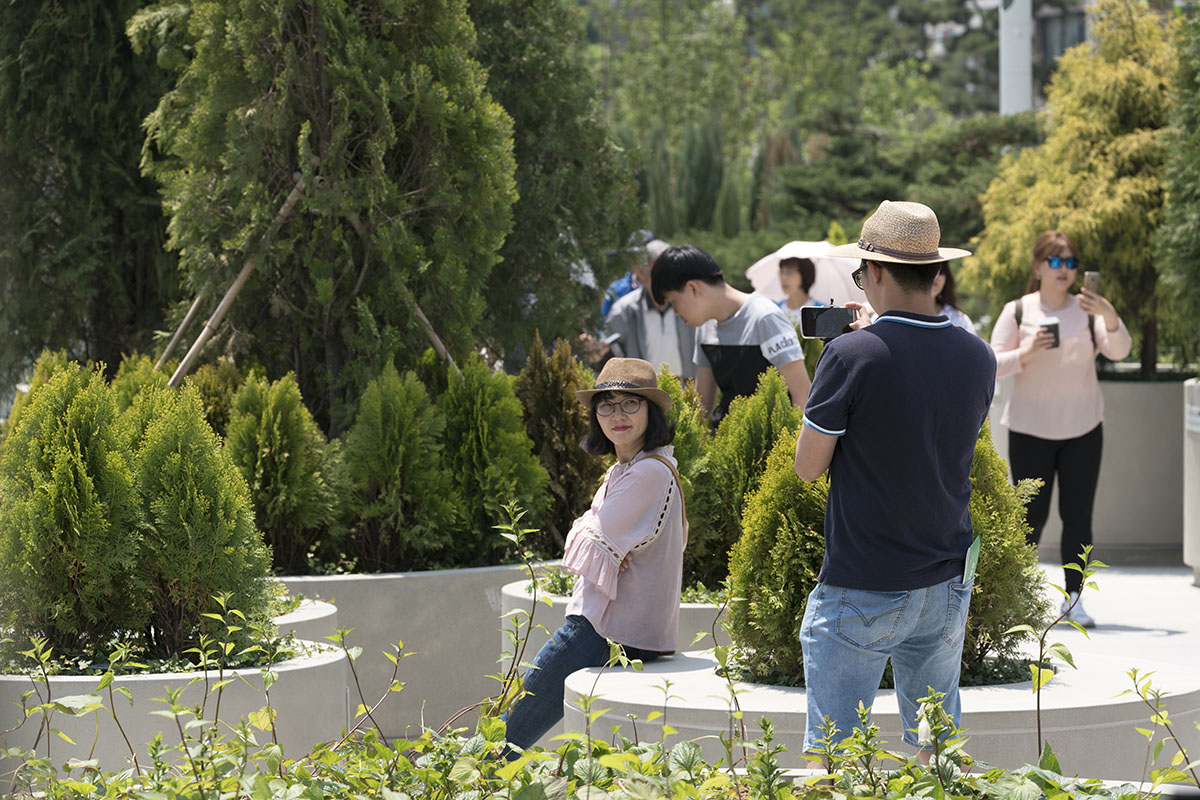 The linear park is conceived as a collection of small gardens, each one with its very own composition, perfume, colour and identity. The landscape of these small gardens will change according to the seasons: the bright colours of leaves in autumn of the Aceraceae family (maples), the blossom of cherry trees and rhododendron in spring, the evergreen conifers trees in winter and shrubs and trees bearing fruit in summer. 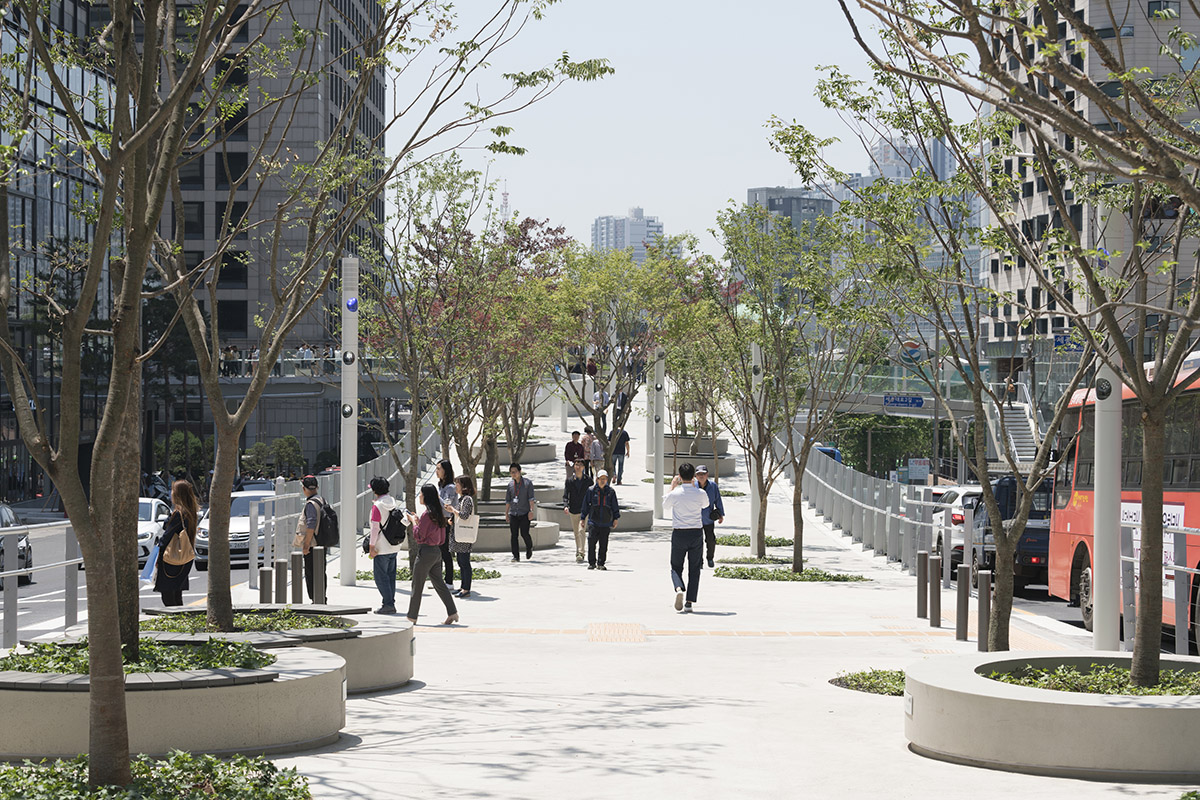 "But it is not only a 'library' of plants, a series of pots are bigger. Here the plants are lifted. Underneath there are shops, galleries, tea houses, a theatre, information centres, maintenance boots and restaurants, thus the viaduct is getting inhabited by a plant village", continued Maas. 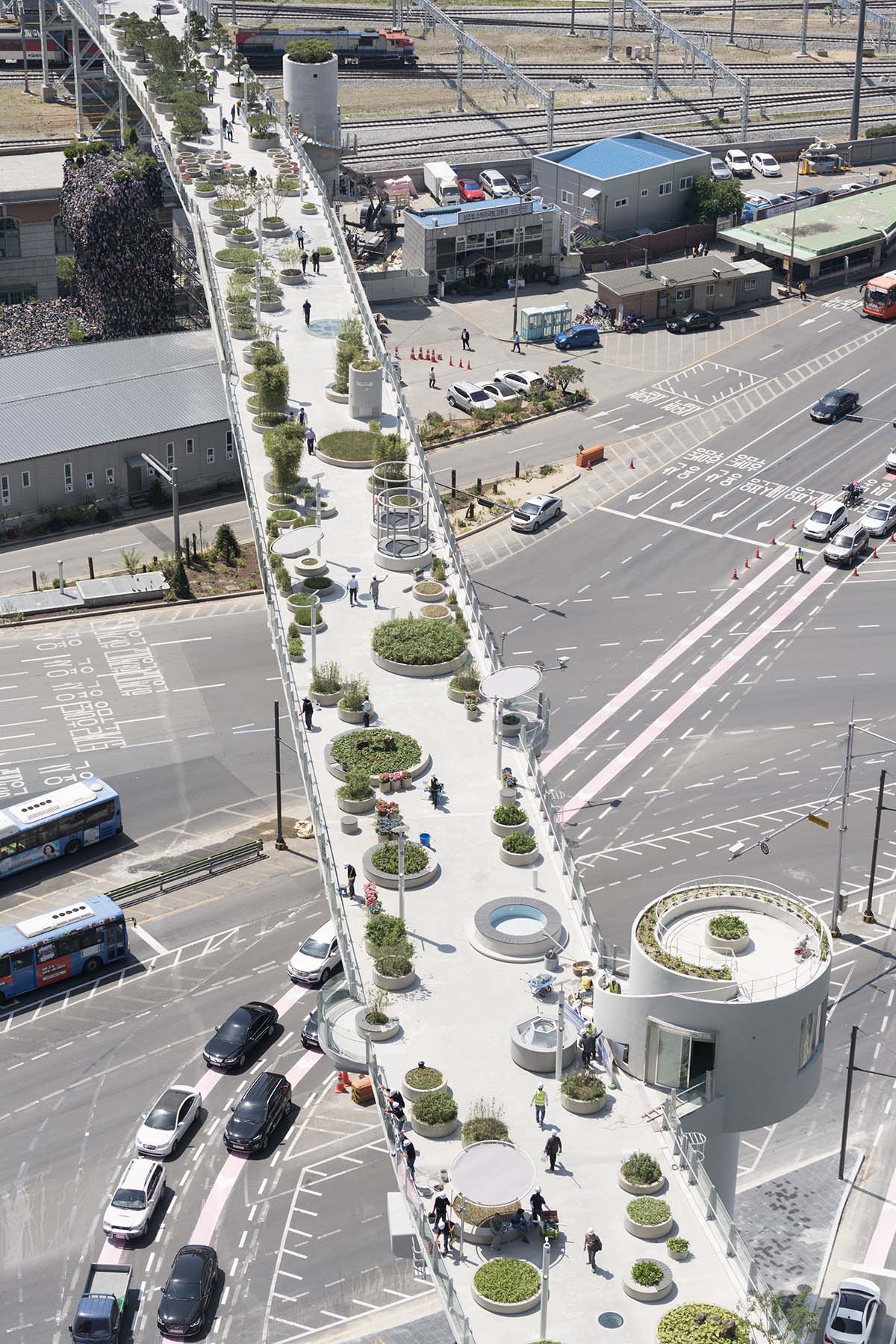 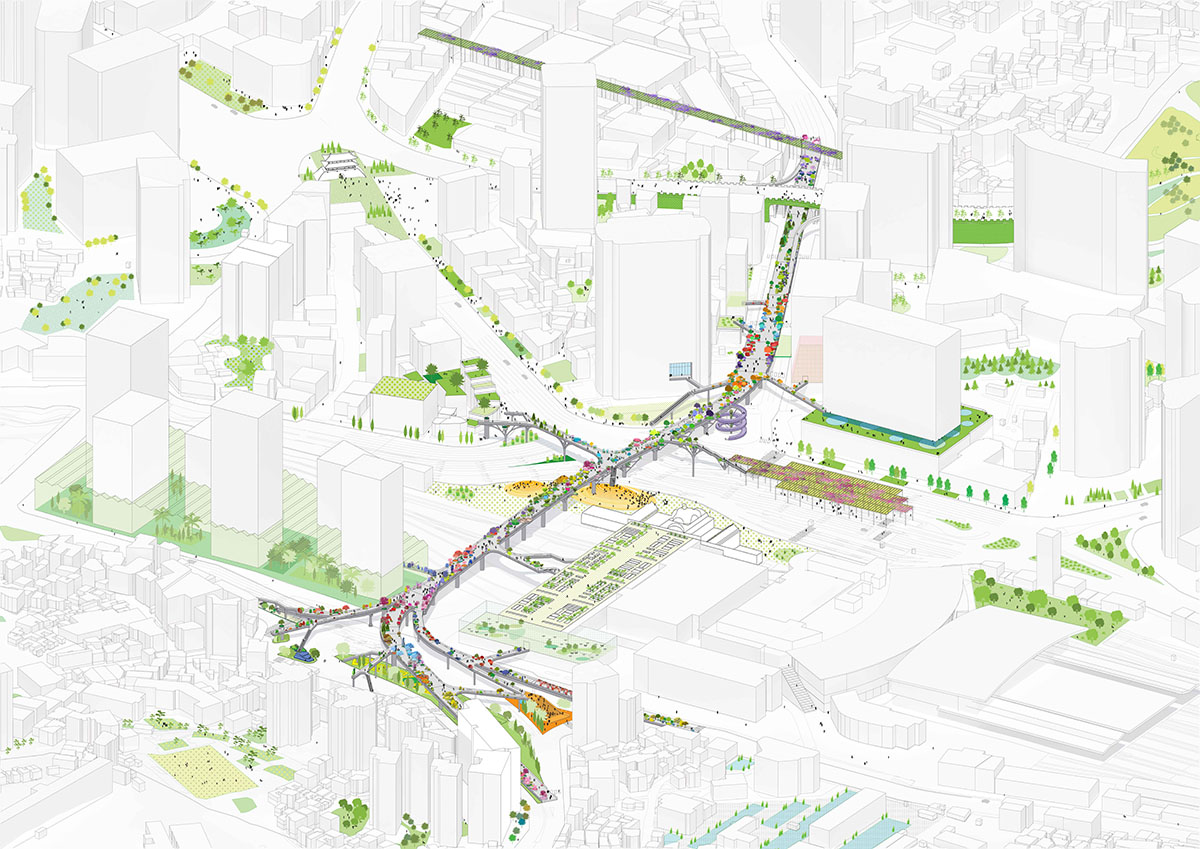 These contribute to enhancing the experience of users, boosting the park with activities that engage the city on a cultural and commercial level. Small mobile pots are added for seeds and plants that can be used afterwards in the bigger pots. A living nursery. 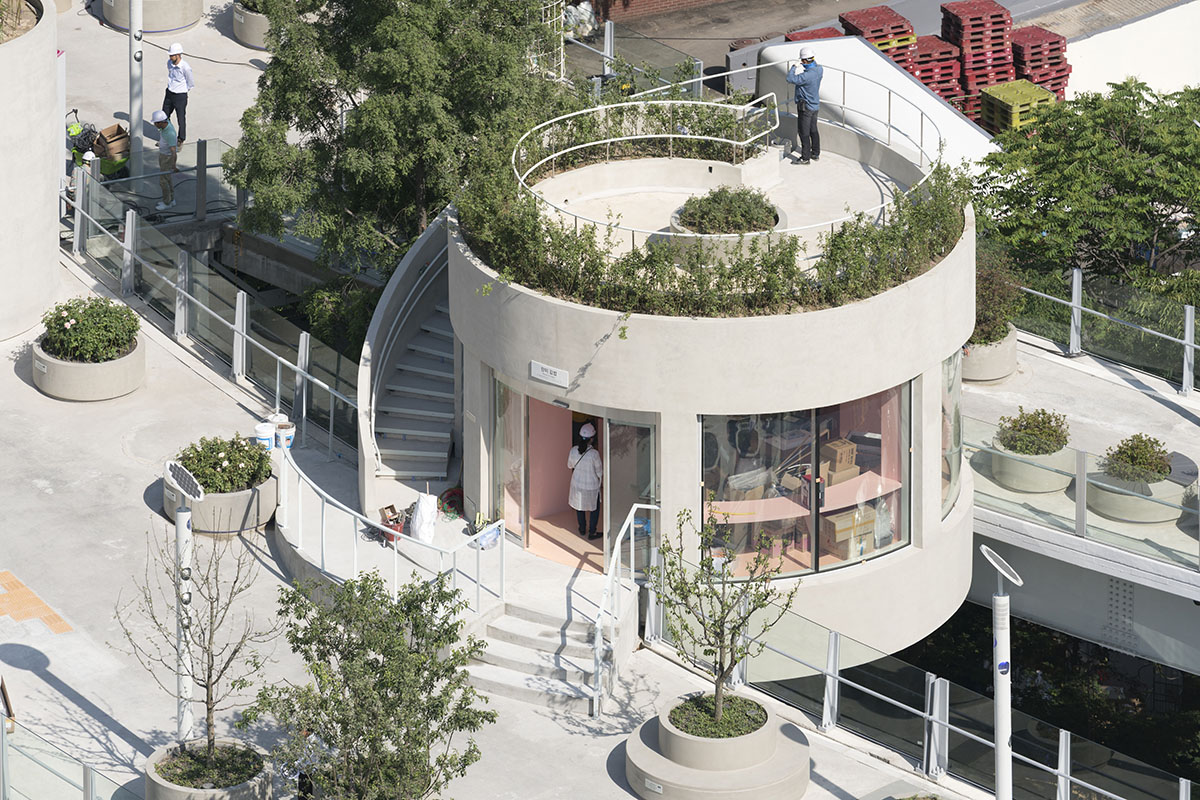 Multiple stairs, lifts, bridges and escalators connect the city to the new park, rebounding it to the adjacent urban fabric. At night, the Skygarden is illuminated in blue lights in contrast to the bright city lights as the colour is friendly to nature. During festivals and celebrations, different colours can also be changed and the park will be accessible 24/7. 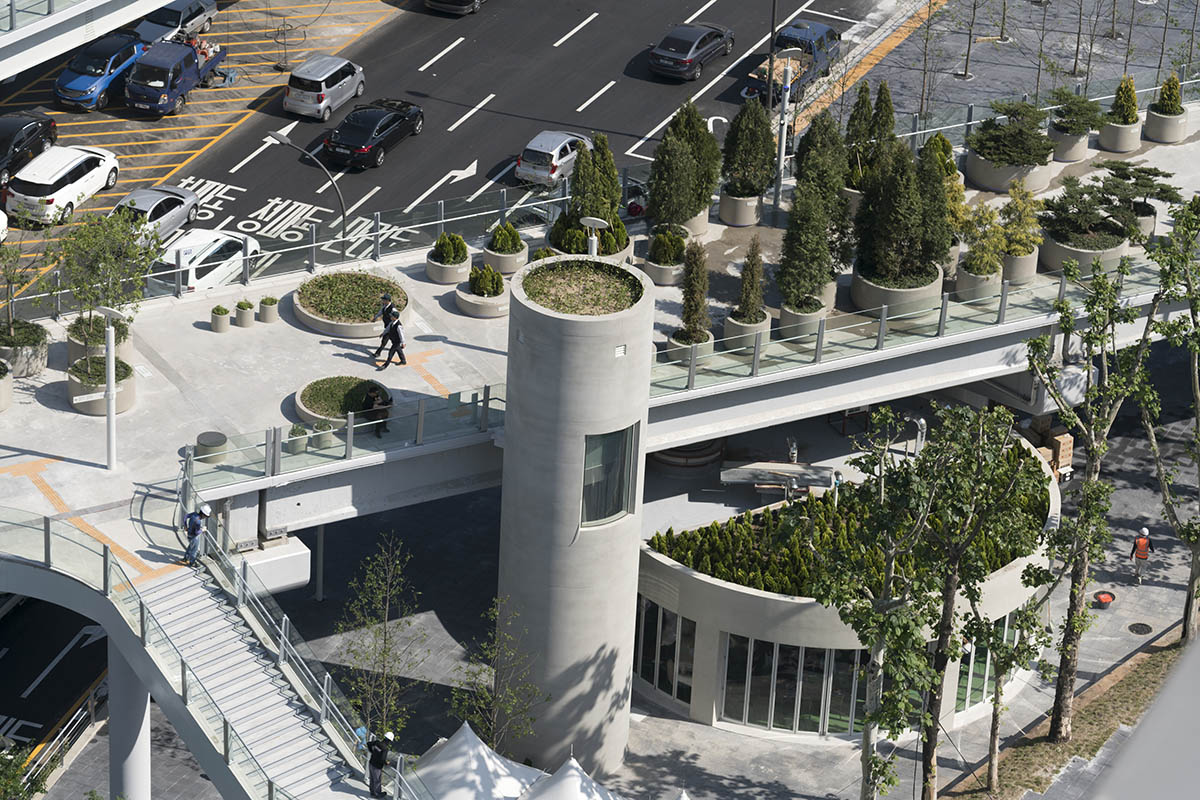 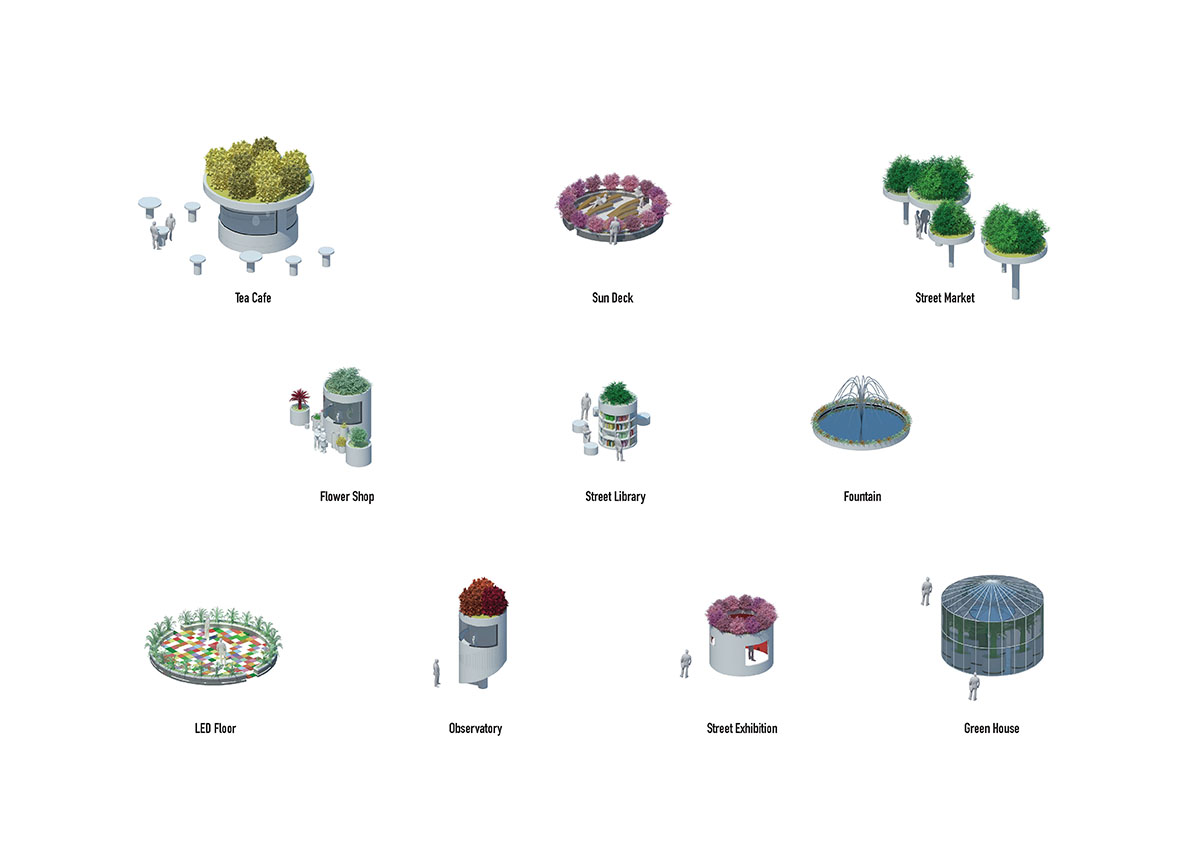 Diagram of activators for this mega-bridge

MVRDV worked together with co-architects, DMP and a dedicated team of experts including, Saman Engineering on for structural consultation, Rogier van der Heide and Nanam ALD for lighting, Ben Kuipers and KECC on the landscape design and plant varieties. 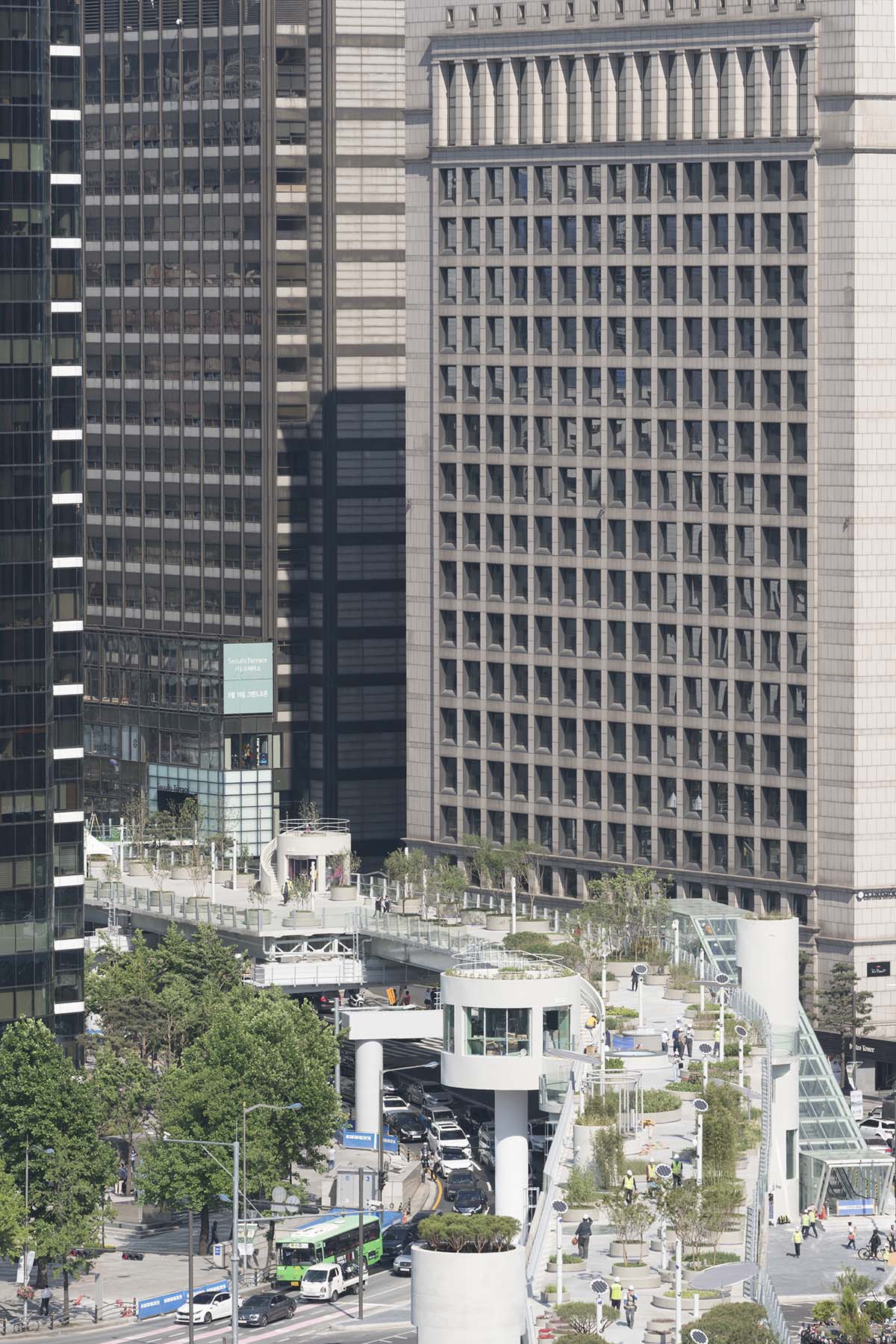 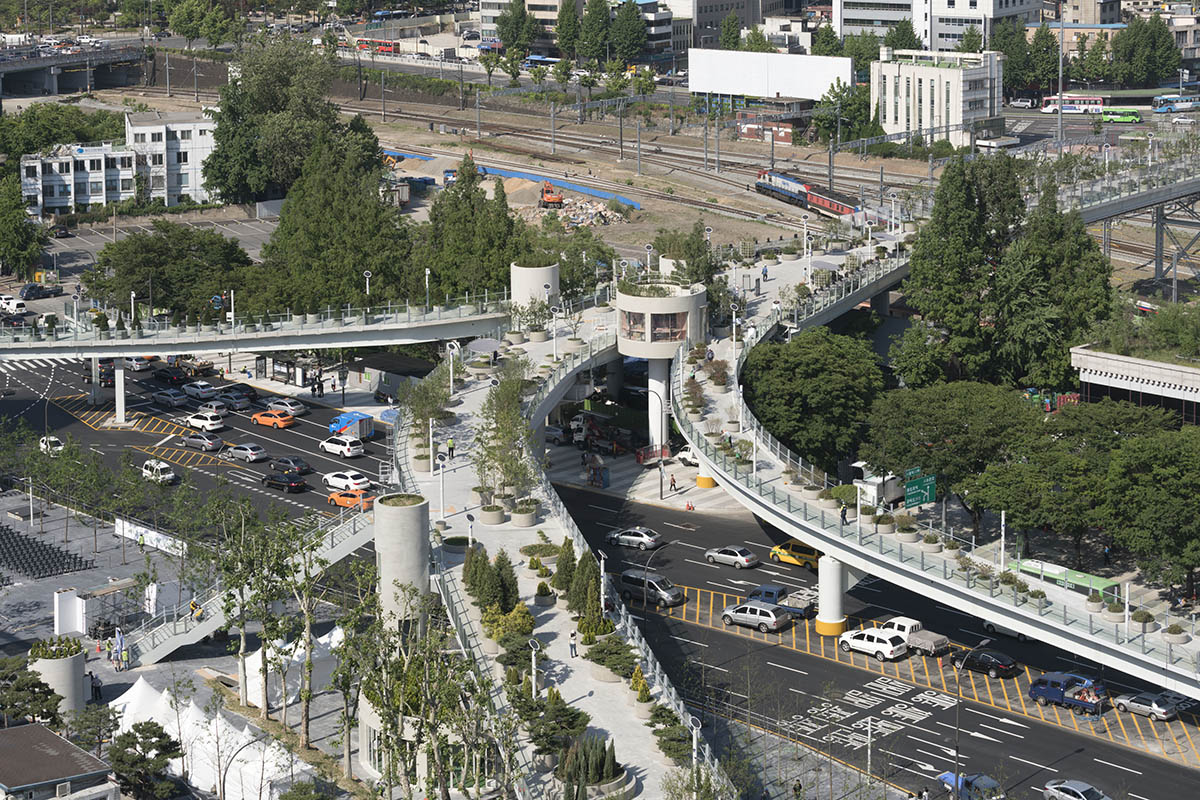 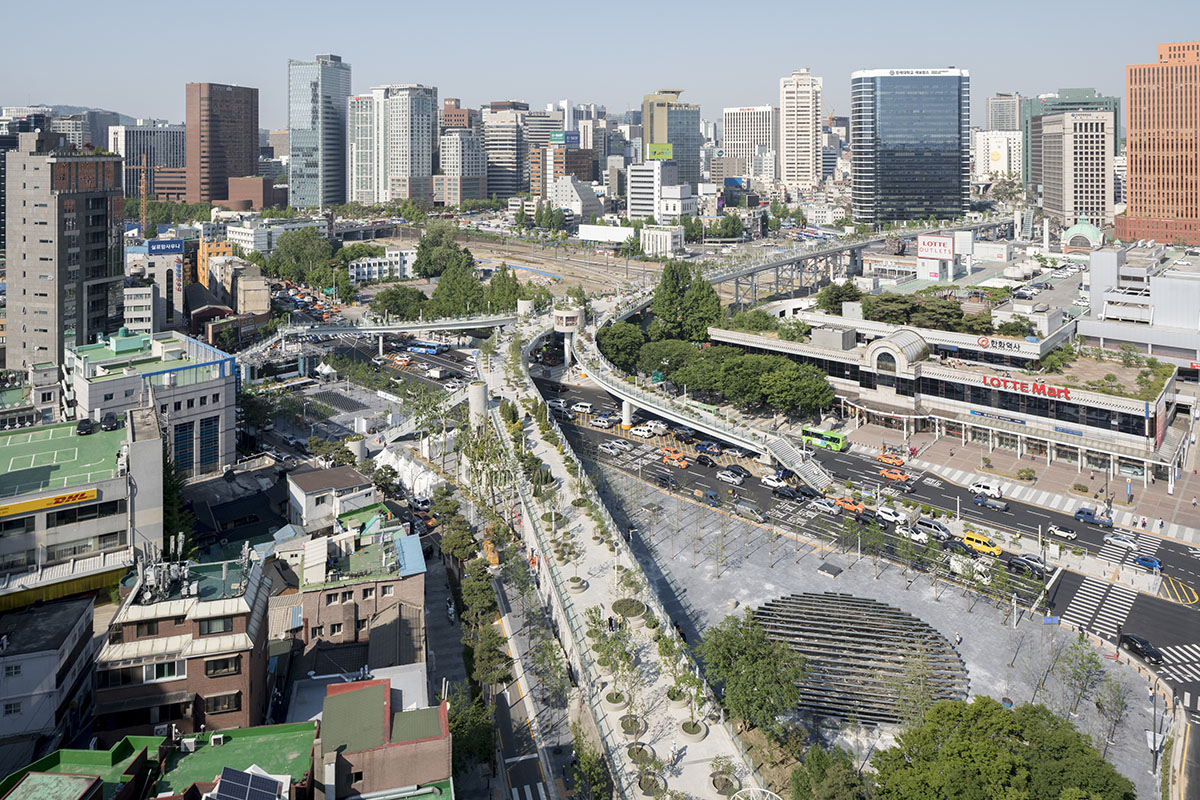 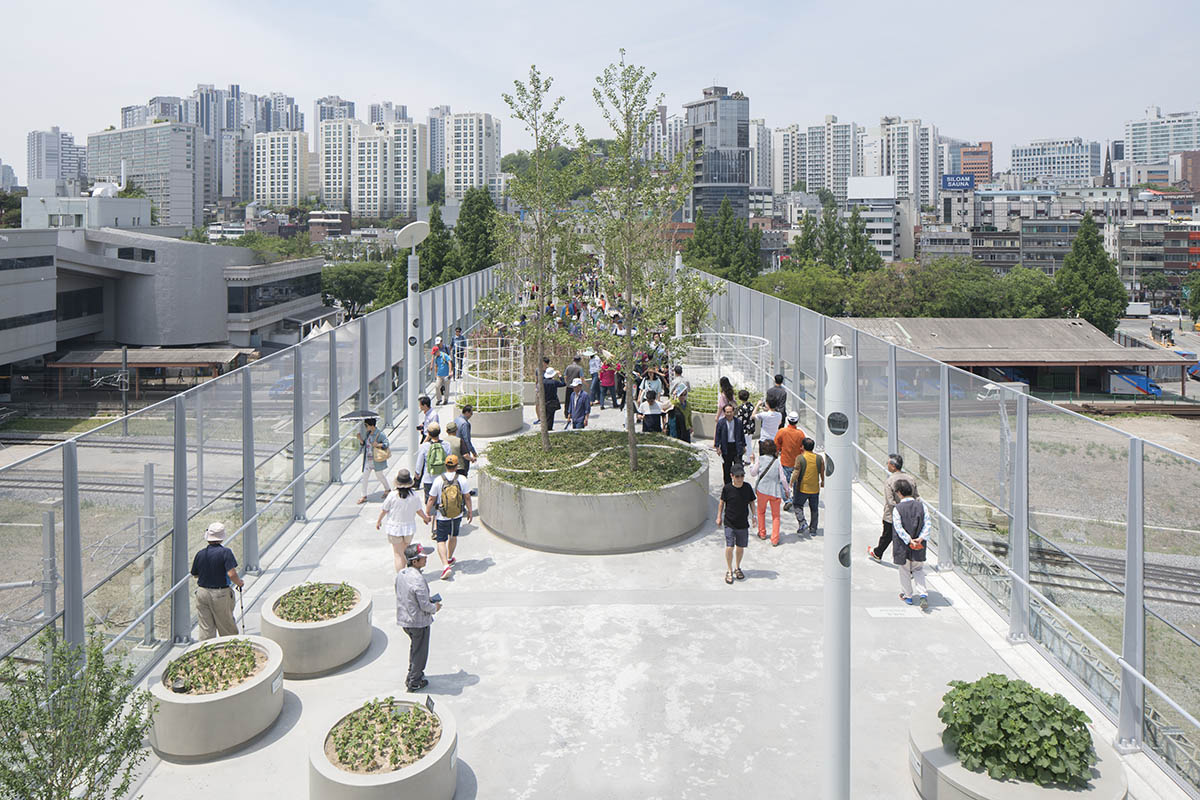 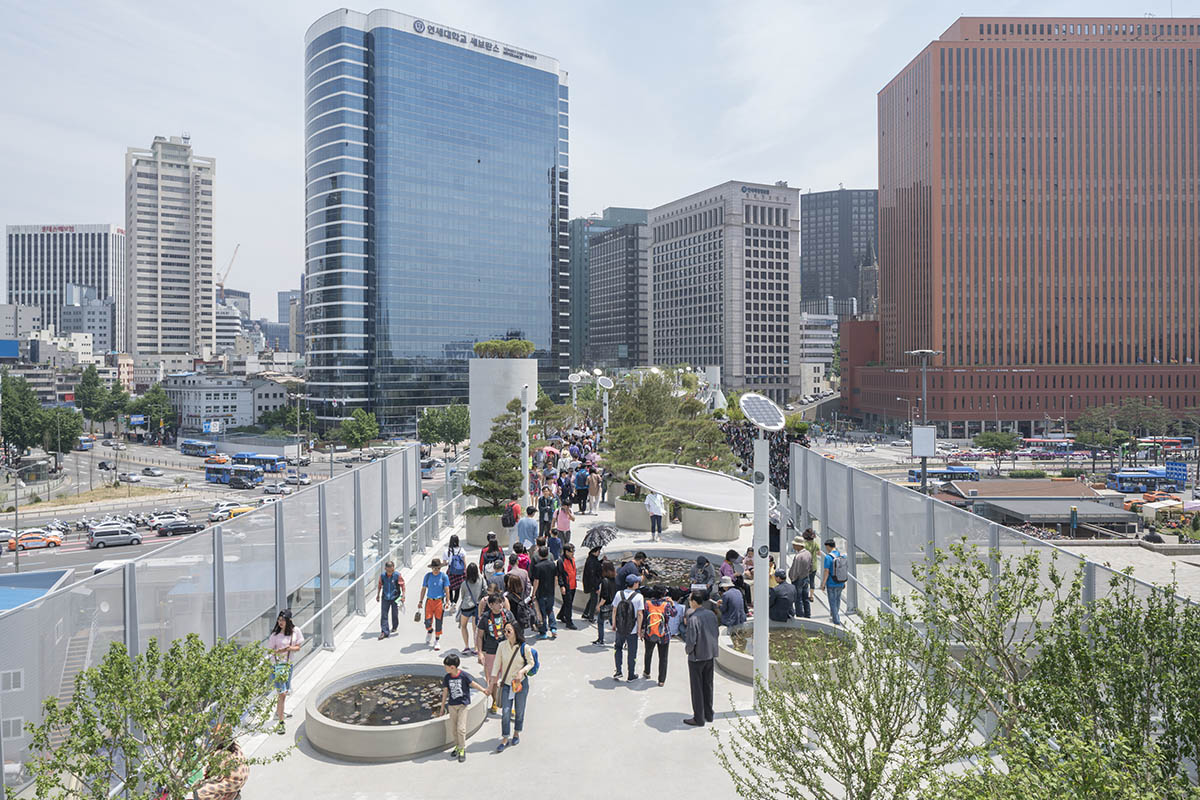 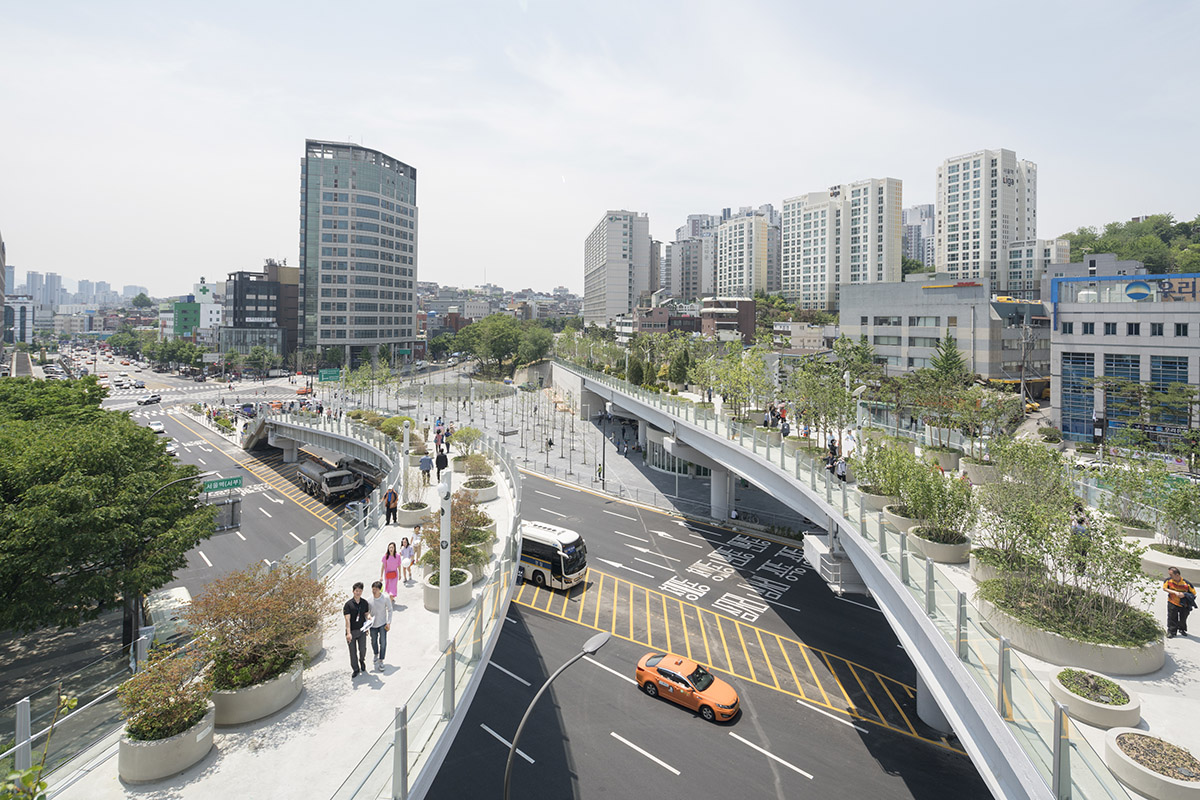 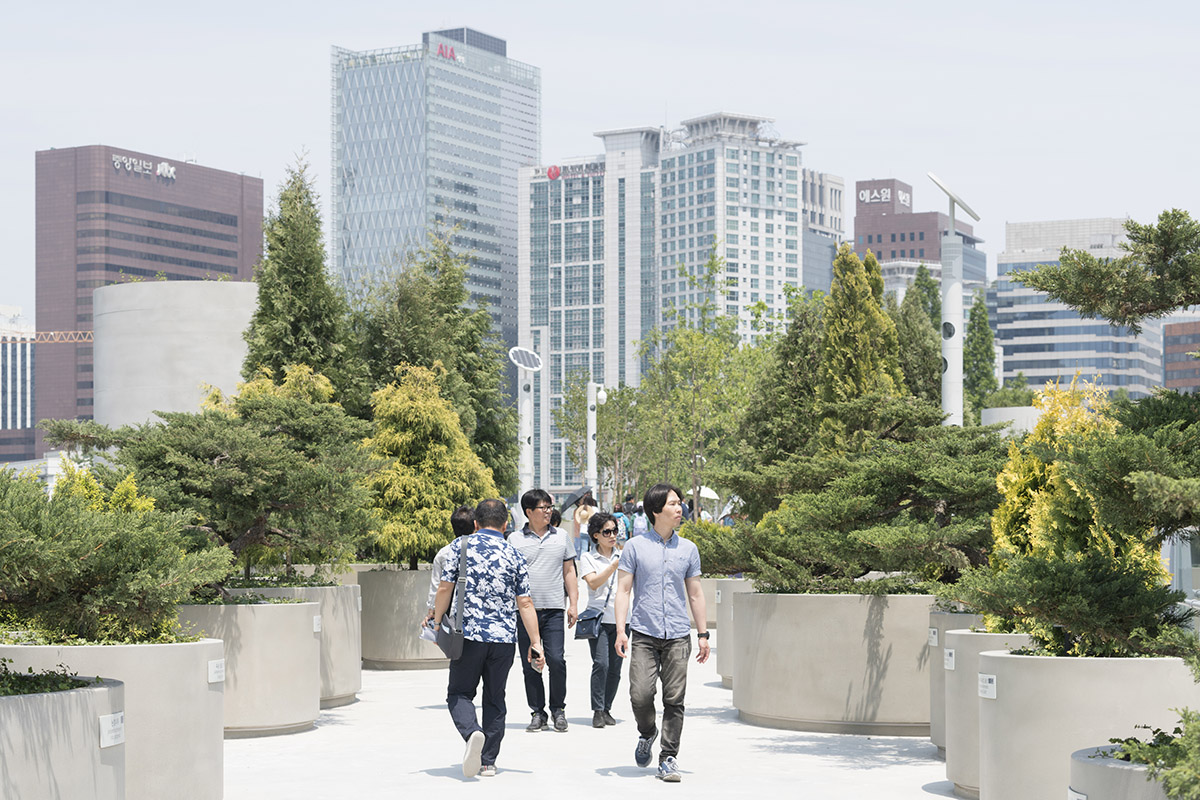 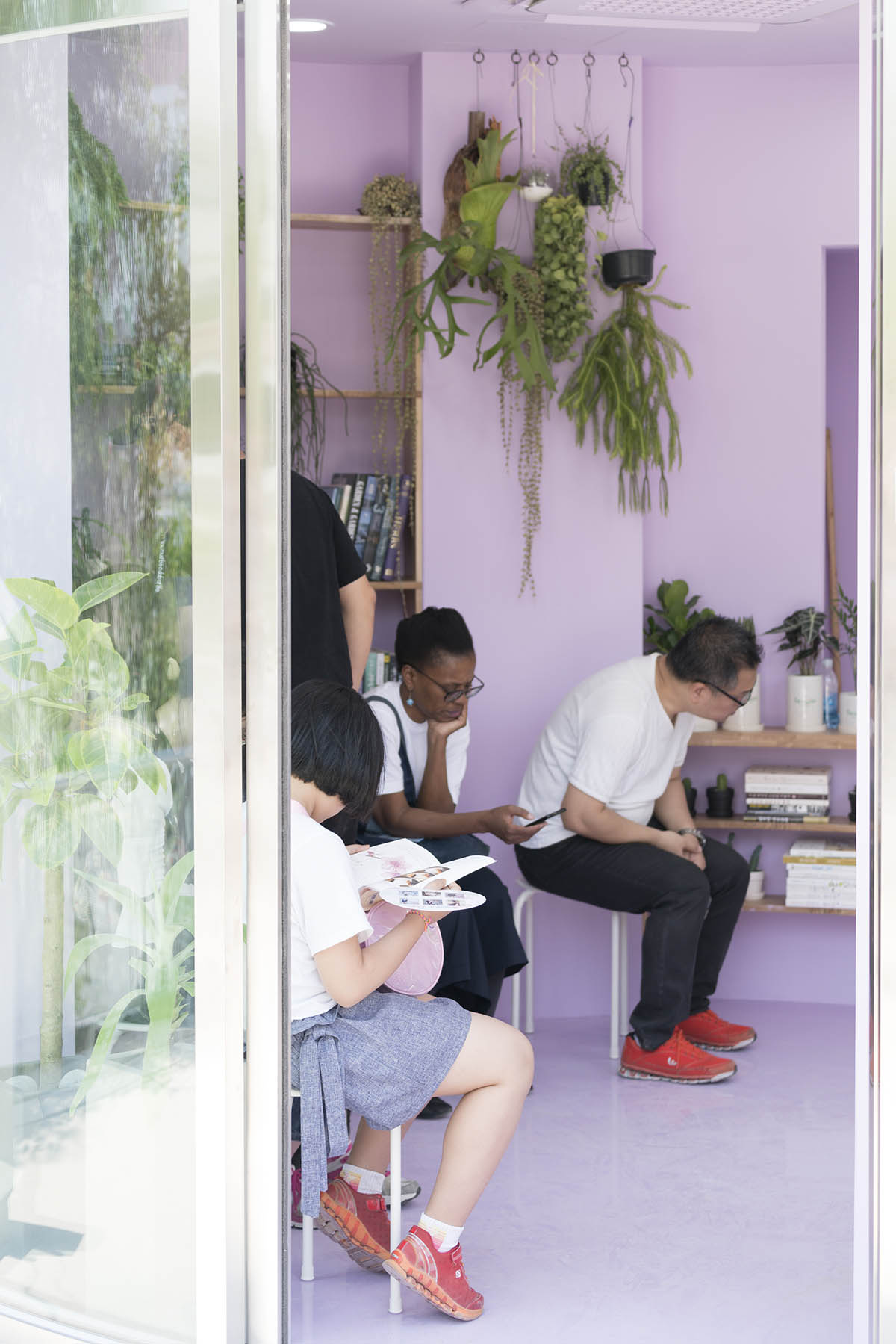