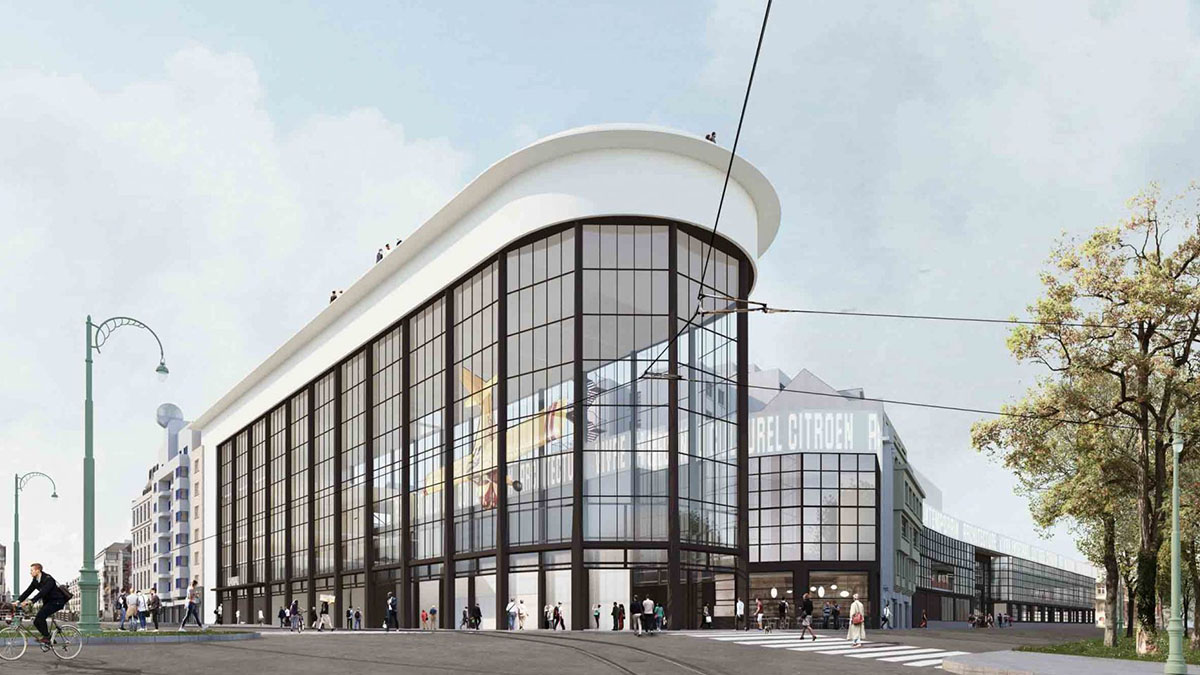 Paris' significant cultural hub Centre Pompidou is preparing to have its new branch in Brussels, following an international competition - which has been won by noArchitecten, Sergison Bates Architects and EM2N.

A trio of architecture firms will convert the former Citroën Yser Garage into a new cultural hub in Brussels. Presented under the name KANAL – Centre Pompidou, the converted landmark building will bring together a Museum of Modern and Contemporary Art, an architecture centre - CIVA Foundation and public spaces devoted to culture, education and leisure. 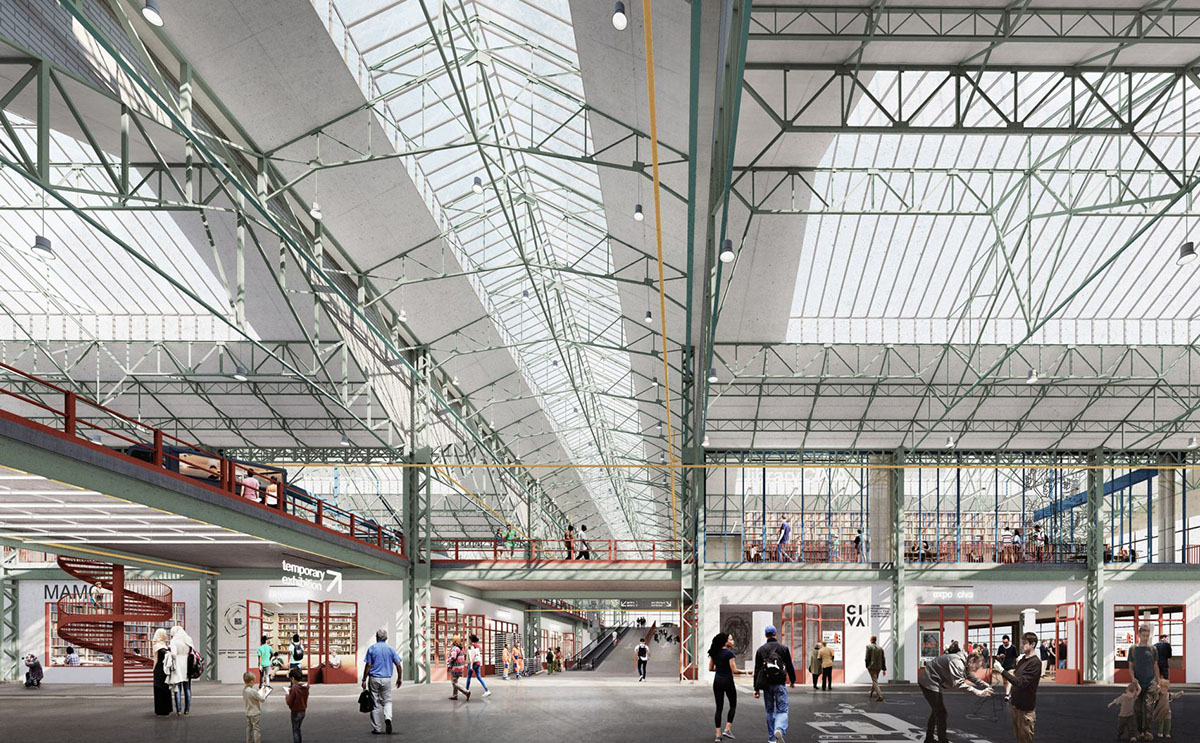 The international team's proposal was praised by the jury, led by Swiss architect Roger Diener, the jury praised the the project as "exceptionally well integrated in its context."

The former Citroën Yser garage was built by French architect Maurice-Jacques Ravazé, the Belgian architects Alexis Dumont and Marcel Van Goethem in the early 1930s for André Citroën's new car factory, which was aimed to be the largest garage in Europe for some time.

The 16,500-square-metre complex, made largely of glass, steel and concrete, is considered to reflect the modernist spirit of its time. As well as these materials, characteristics such as "openness, transparency, flexibility, horizontality, functionality and light" are described as an important key elements of the design. 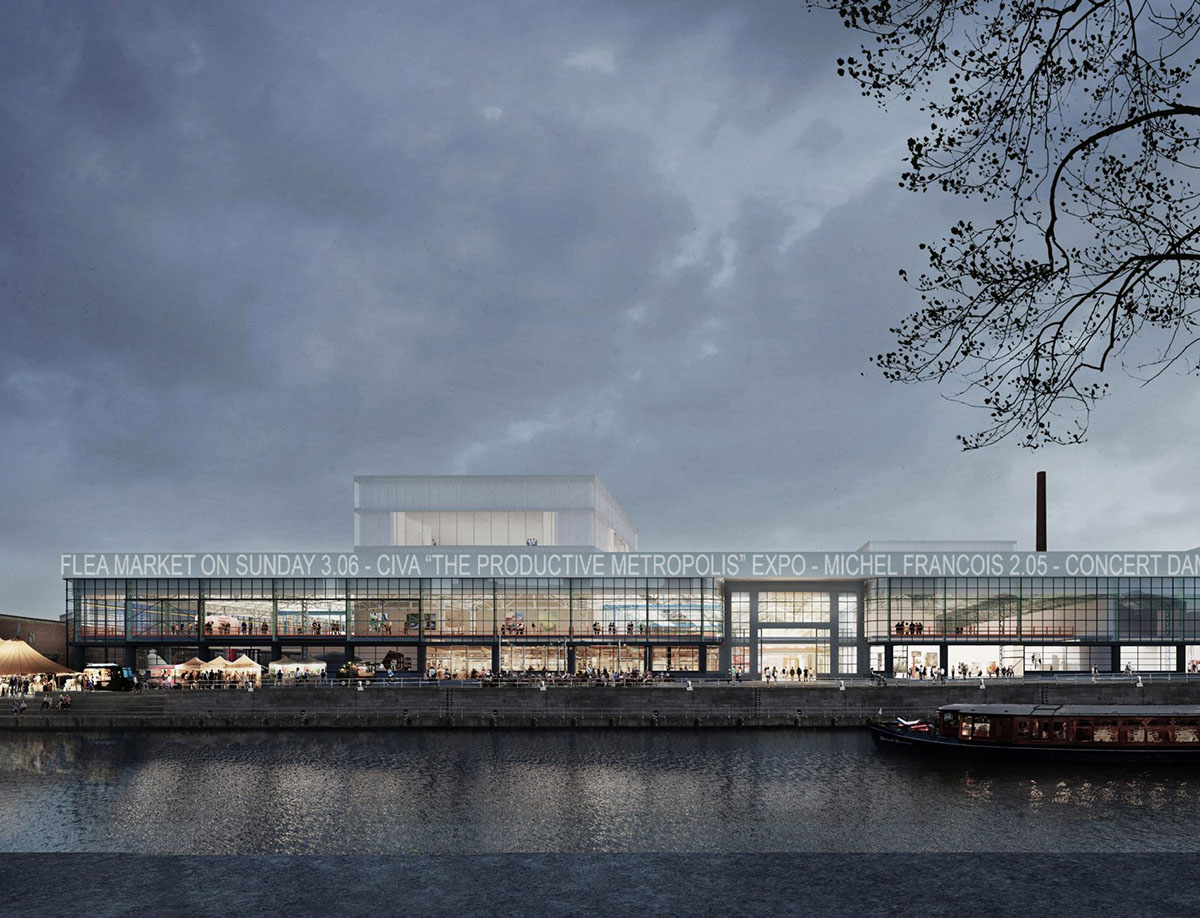 "Located at the intersection of Place de l’Yser and Quai de Willebroeck, the showroom is a deliberately spectacular 21-metre-high glass palace, characterised by a rounded curtain wall extending from the ground floor to the roof," stated in the project statement.

"This curtain wall is structured vertically by oval columns that emphasise the slenderness of this ‘cathedral of space and light’, and finished off by a horizontal course projecting above it."

The new KANAL – Centre Pompidou will combine two museums: "one will be dedicated to modern and contemporary art, the other to architecture – and much, much more than that," said the architects.

Speaking on behalf of the team, Stephen Bates said: “Kanal is not a museum. It is two museums, one dedicated to modern and contemporary art, the other to architecture – and much, much more than that."

"The project is above all about an attitude, about appropriating a piece of the city and weaving it into its cultural and social fabric, about making an architectural framework that can act as a backdrop for spectacle, and a catalyst for social interaction. We are proud and excited to be working on such a ground-breaking project in such an inspiring building. We look forward to the challenges ahead.” 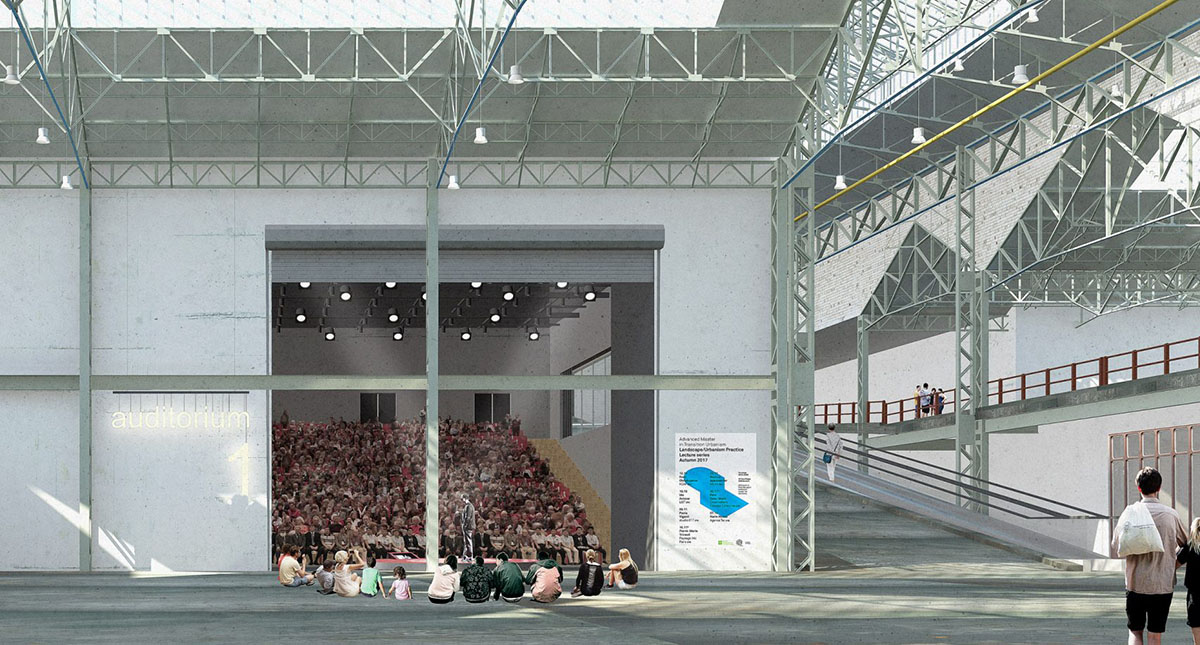 The architects will restructure the old showroom with a big "display window" which will house to various installations, performances and concerts on the ground floor, and a restaurant on the third floor. The old office room will be demoslihed to extend the space. On the next door, an electrically-written sign will mark the showroom's events.

Three functional elements, containing the art museum, architecture centre and a 400-seat auditorium, will be scattered within three boxes so that each volume's climatic conditions can be controlled. 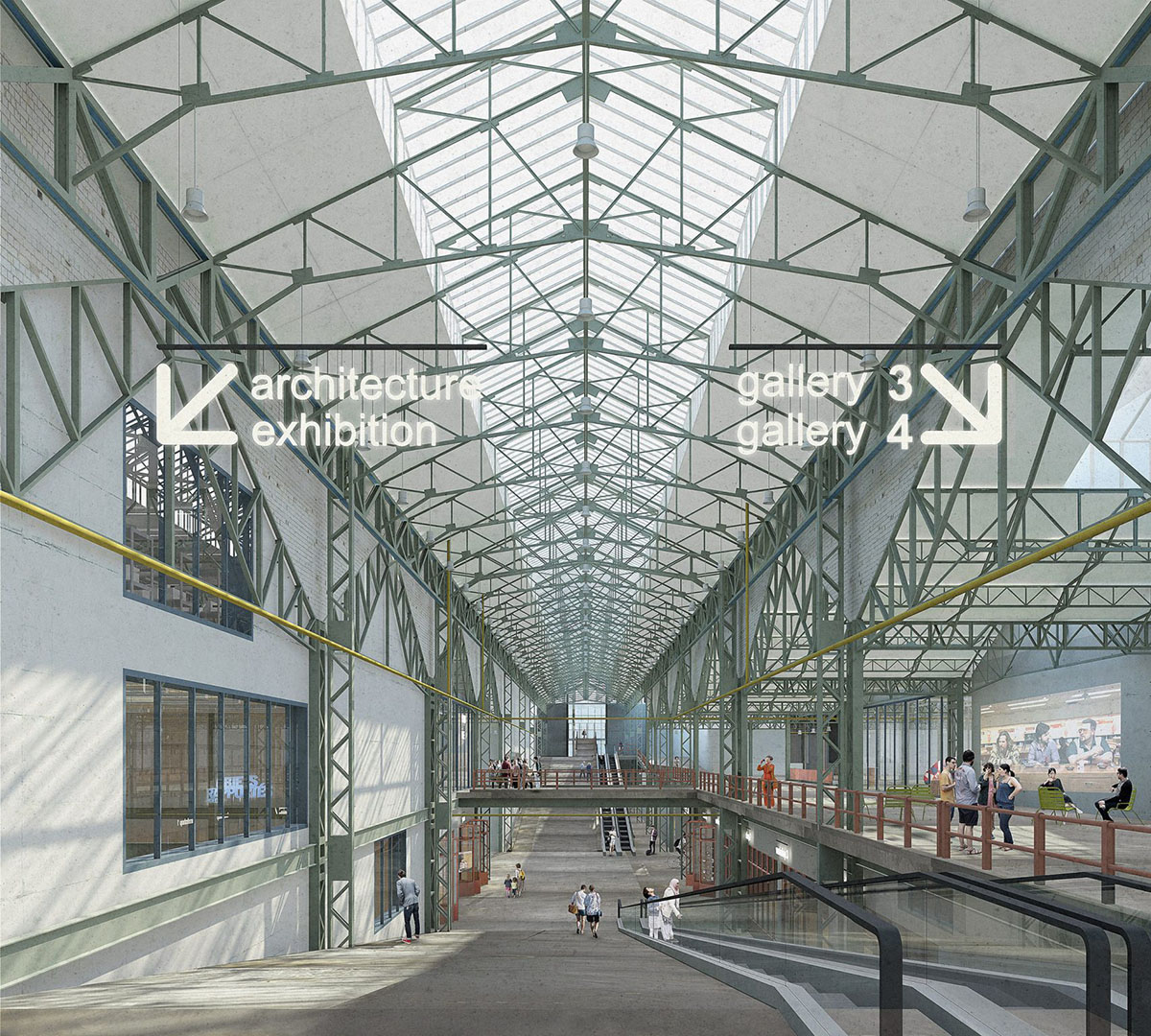 Described as "a cathedral of steel and glass", inside, a transverse ‘street’ will cross the site measuring 35,000 m2, giving access to three large ‘boxes in the box’, which will be inserted in the former workshops and will accommodate the Museum of Modern and Contemporary Art, the CIVA Foundation and a 400-seat auditorium.

This solution will enable the team of international architects to control the climatic conditions of the different spaces, but it also reflects the team’s desire to breathe life into all of the building’s façades. The museum will benefit from exhibition spaces spread out over four floors of varying heights, making a range of configurations possible. 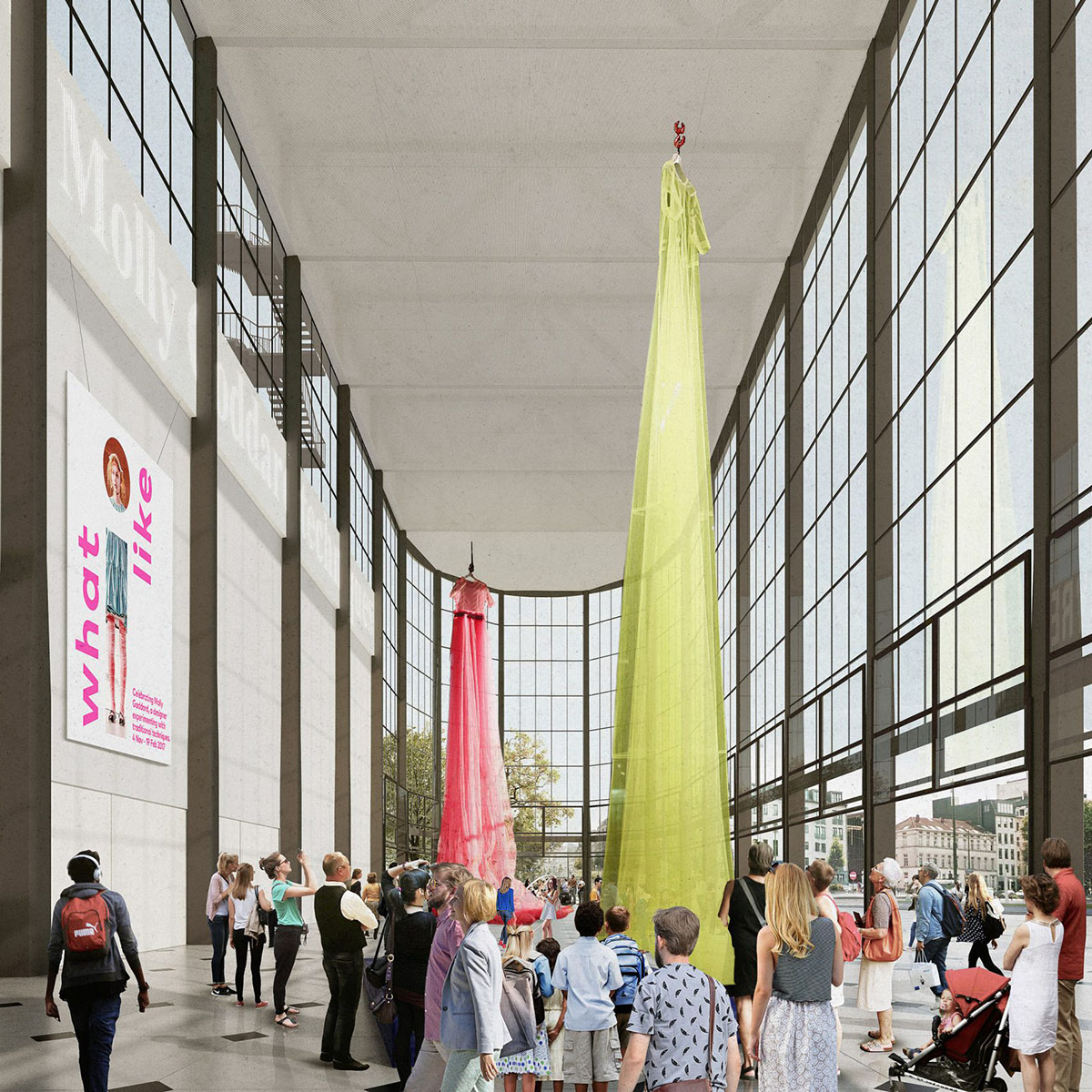 "The winning team has conceived the cultural hub as a ‘welcoming, lively and dynamic place of exchange, a place that invites all Brussels residents to feel at home there’. The project stood out also through its collaborative approach: the architects engaged in wide-ranging concertation with the sociocultural scene, whether locally (among others, JES, Maison des cultures et de la cohésion sociale, several Brussels artists) or internationally (Tate Modern, Deutsches Architekturmuseum). The project also includes an extension of the Kaaitheater and a functional connection with neighbouring institutions," said in a press statement. 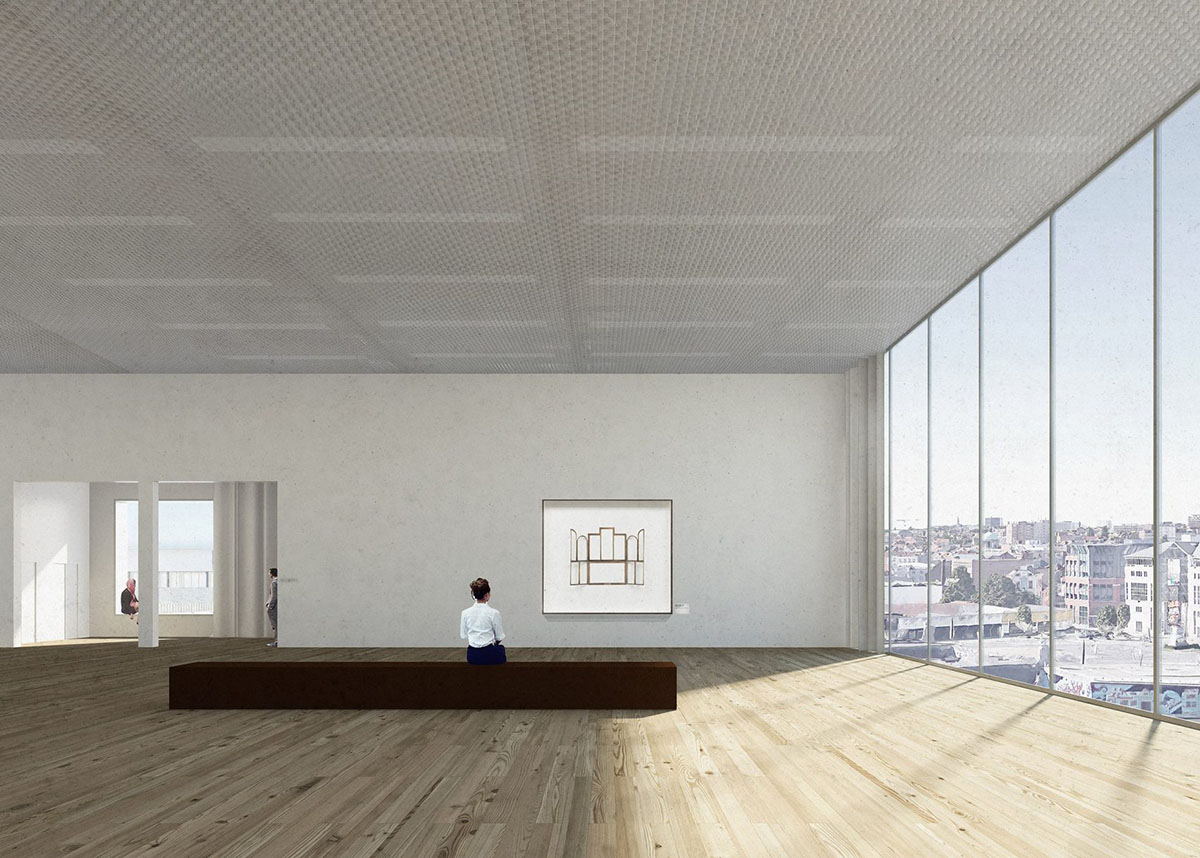 The project fully integrates KANAL - Centre Pompidou in its urban context, among others thanks to openings in all the façades and a selection of activities (workshops, shops) that give out onto the surrounding urban axes, onto the canal and the Maximilien Park. The project stresses sustainability, heavily limiting the use of new materials and needs in terms of heating/ cooling (there are different levels of climatic comfort depending on the spaces). Likewise, sources of heat and cooling come from the immediate environment (water from the canal, underground, roofs).

Launched on 28 March 2017 by the Urban Development Corporation (SAU-MSI) of the Brussels-Capital Region, the owner of the former garage since 2015, later taken over by the Foundation KANAL, this international architecture competition is one of the most important ever to have been organized in Brussels. 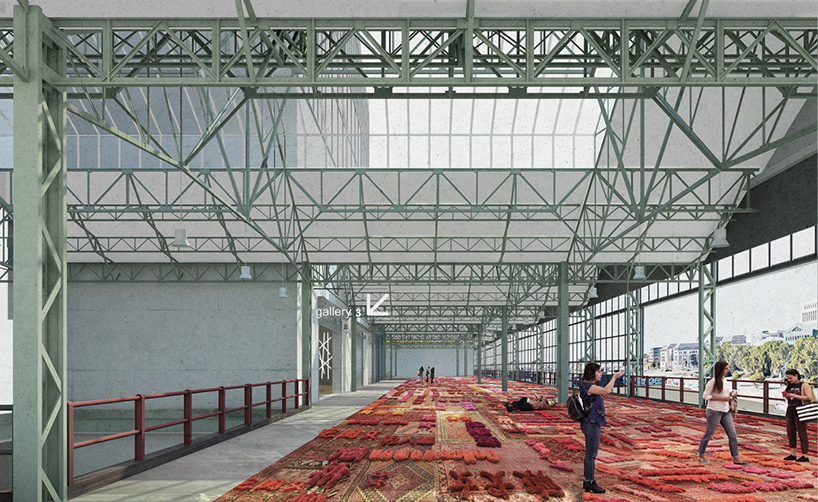 The project budged is expected to cost €125 million (excluding VAT). Work will begin in the autumn of 2019 and will be phased over several stages until the official opening in late 2022, enabling KANAL - Centre Pompidou to organize temporal cultural activities throughout the duration of the work. 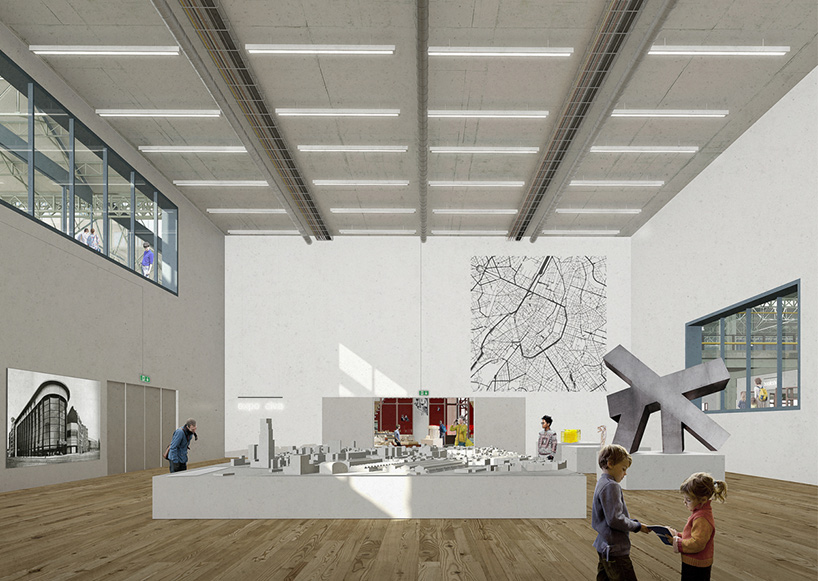 After an initial selection among the 92 projects submitted, 7 teams were invited to present a competition project to an international jury mandated by the Board of Administrators of the Foundation KANAL.

Presided by the Swiss architect Roger Diener, this jury was composed of international experts, of the Chief Architect of the Brussels-Capital Region Kristiaan Borret and other administrative representatives of the Region, as well as of the president of the Centre Pompidou.

Last year, David Chipperfield Architects was also commissioned to design Shanghai’s Centre Pompidou in West Bund Art Museum, which was developed as part of a long-term cultural cooperation project between France and China.