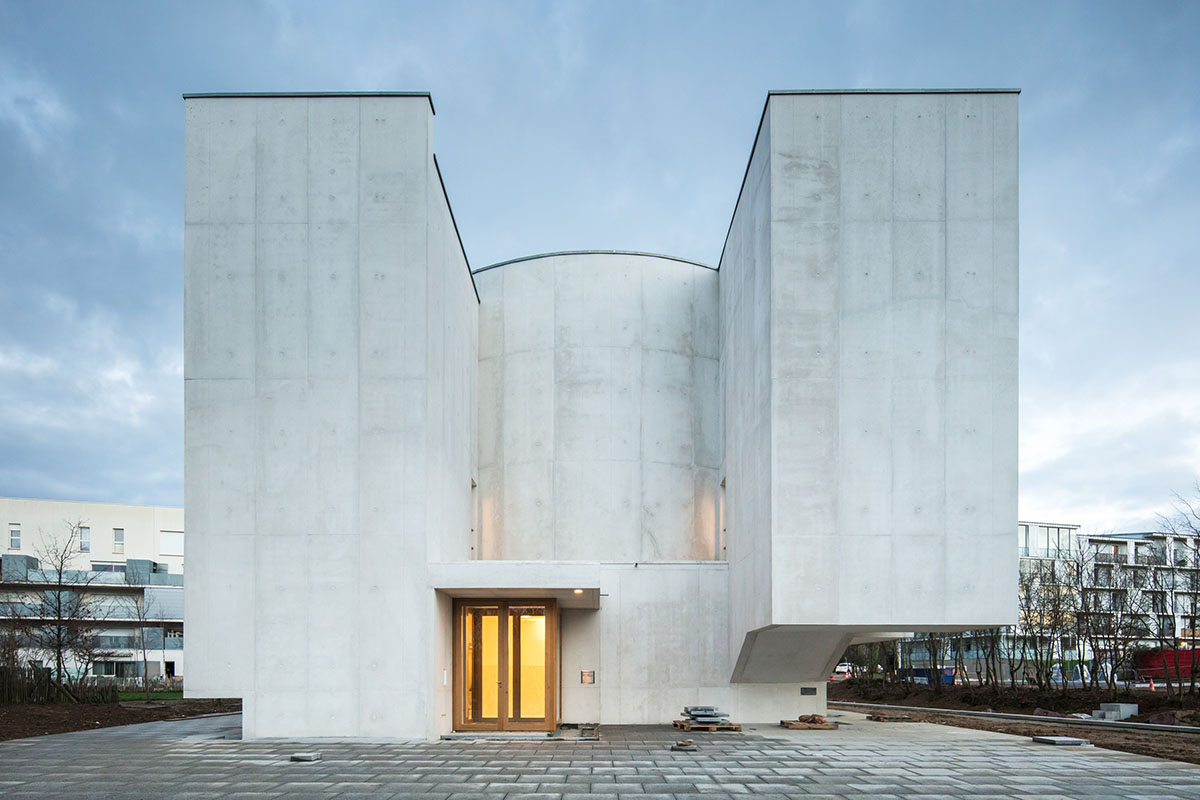 Pritzker-prize winning Portuguese architect Álvaro Siza Vieira has completed his first church in France’s Brittany region, which strongly shows his sculptural design approach to this modern building. Opened to the public on February 11, 2018, the building has been captured by Portugal-based architectural photographer Joao Morgado.

Called Saint-Jacques-de-la-Lande, the church is designed to be a unique ceremonial space with the play of light and all-white concrete volumes that are gently folds into the neighbourhood building in the south of Rennes, a residential area with five-story housing blocks. 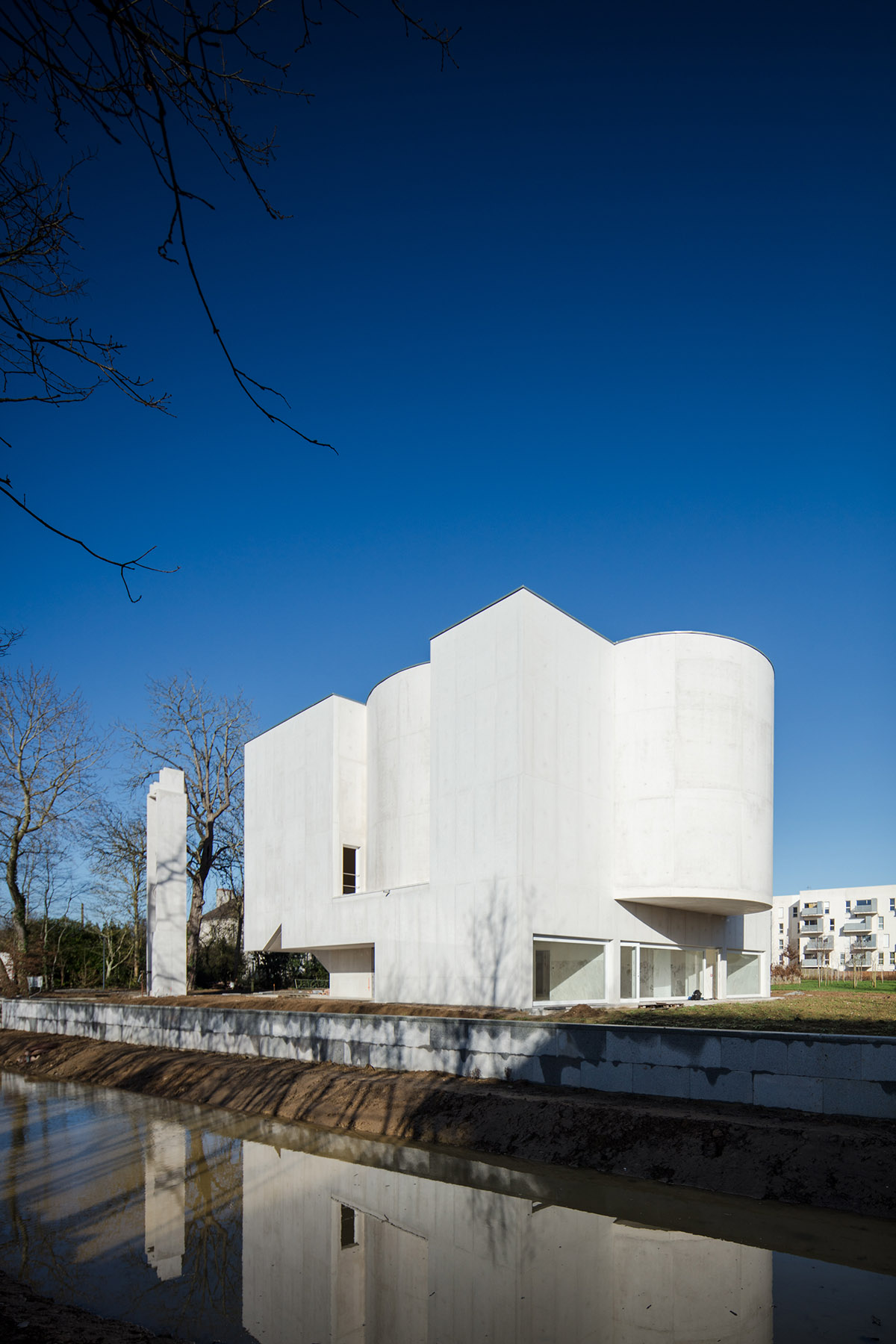 Siza Vieira, 84, is generally known for his sculptural buildings in which are presented as "a poetic approach", featuring harmonisation of light, moulded forms and pure simplicity. The Saint-Jacques-de-la-Lande church emerges as a new design concern to integrate the church into the existing urban fabric. The building, in its overall form, features the intersection of two rectangular volumes with a circular shape that is compressed between these two volumes.

The circular shape is designed as one of the hallmarks of the building placed on the second floor, which will hold up to 120 people - freeing up the first floor for social and administrative areas. 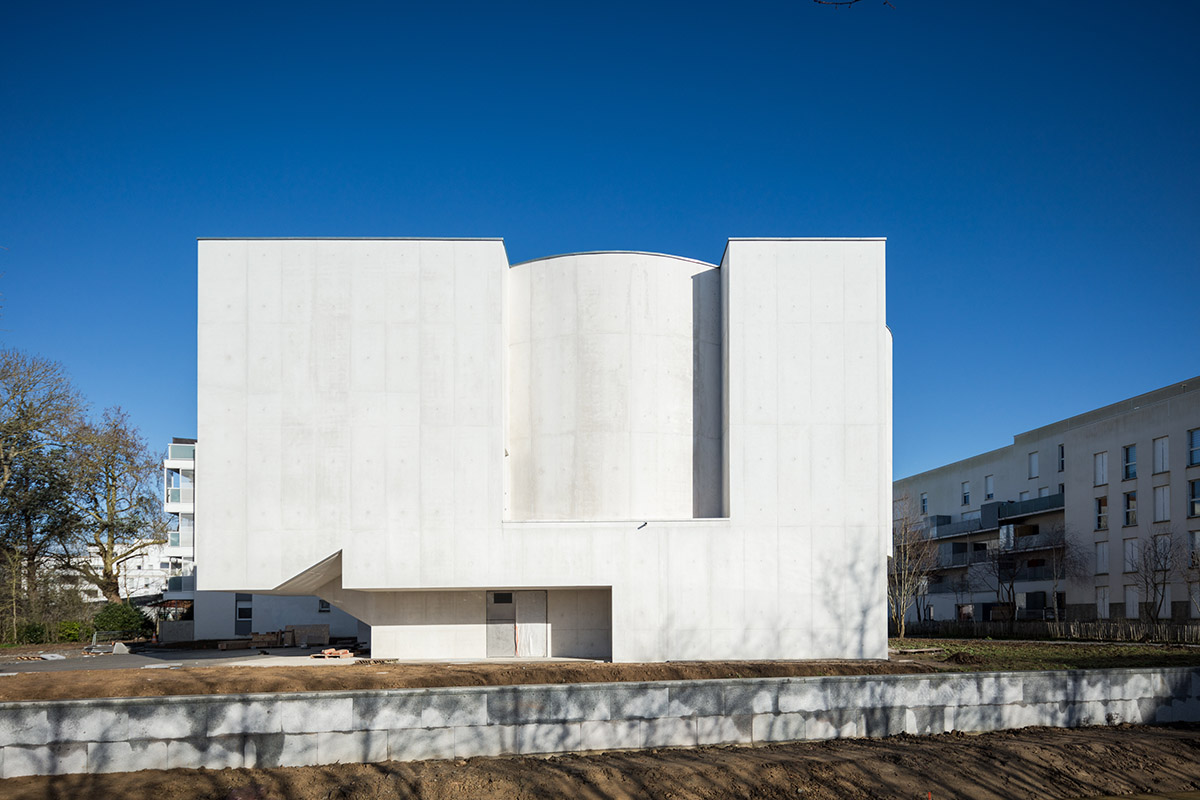 The church stands as a free-standing volume that adapts to the existing plan and the dimensions of the nearby buildings and spaces, extant or planned, in particular the size of the apartment block to the north. 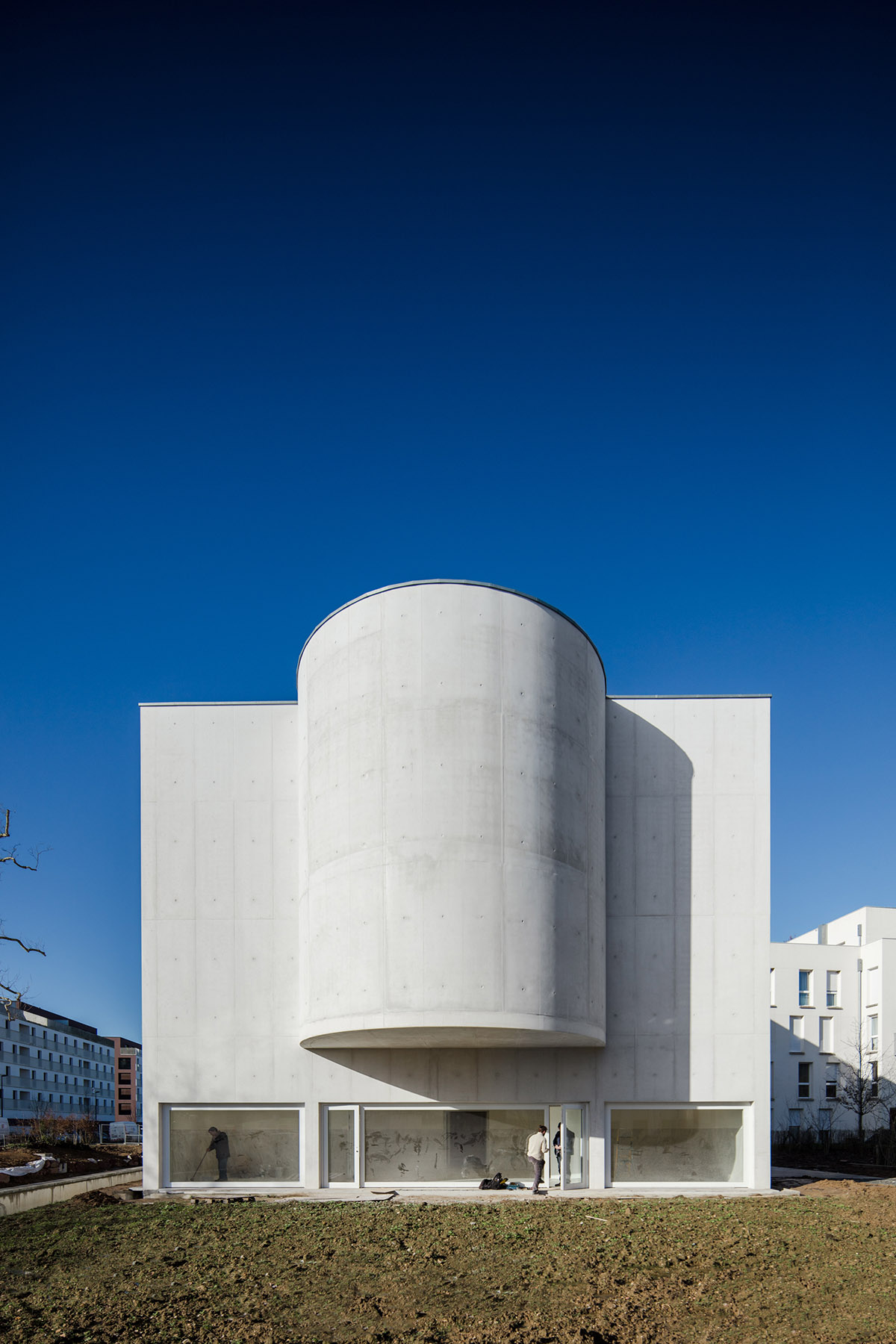 The studio distributes the programme across two levels by superimposing a cylinder with a 14.75m outer diameter on a 16x6 m square plan with a total height of 12m.

The Parish Centre and the church are situated on the first and second floors respectively, with a smaller 97,2-square-metre basement for the technical and storage areas. 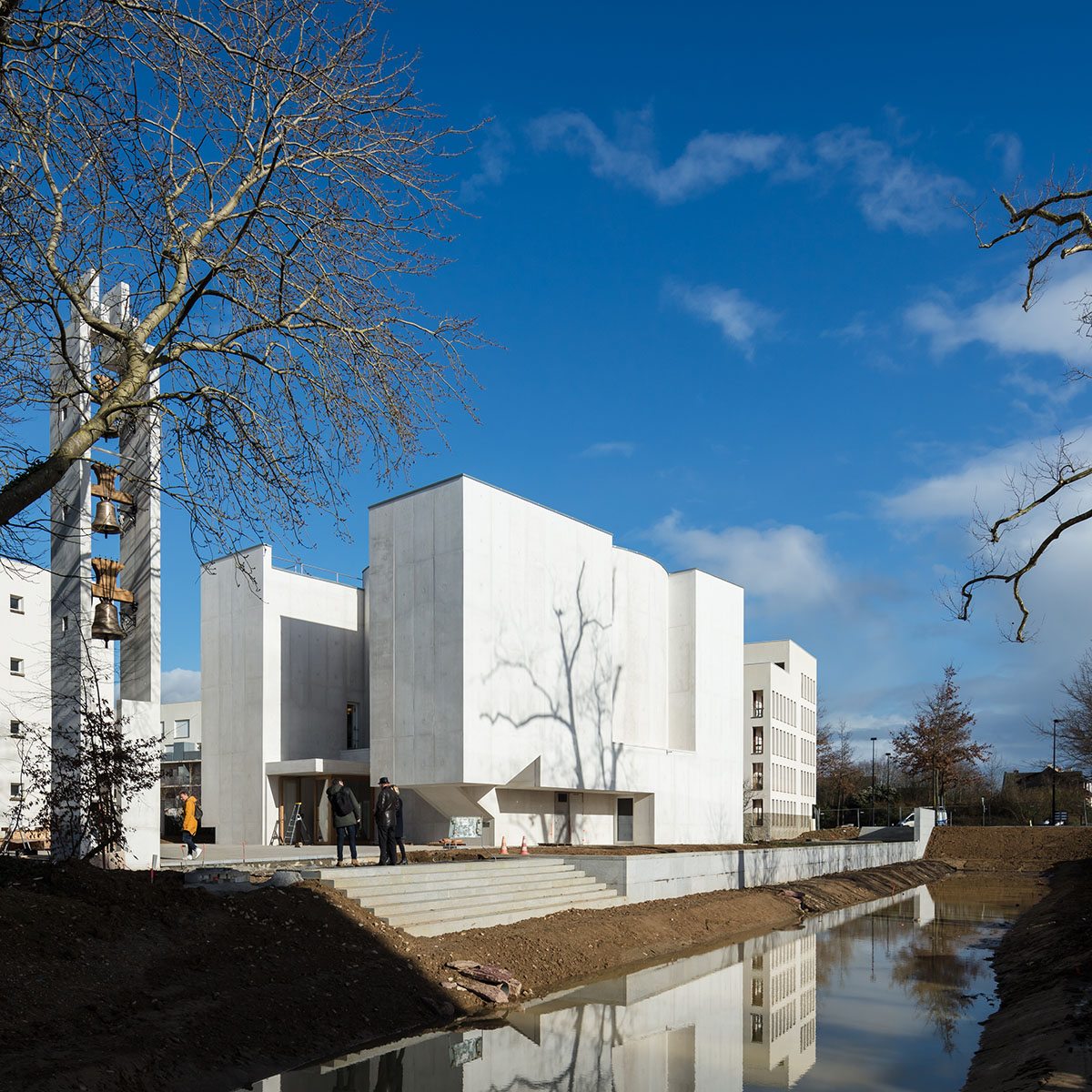 "Two rectangular volumes break off to the west of this core, framing the entrance atrium and spanning the full height of the building," said Álvaro Siza Vieira.

"Another two identical quadrangular volumes lie to the east, along with a cantilevered half cylinder that emerges from the top floor. Circulation between the two floors is via a lift and two stairways - one of them enclosed - with two flights.The central part of the church has seating for 126, with access tor the disabled." 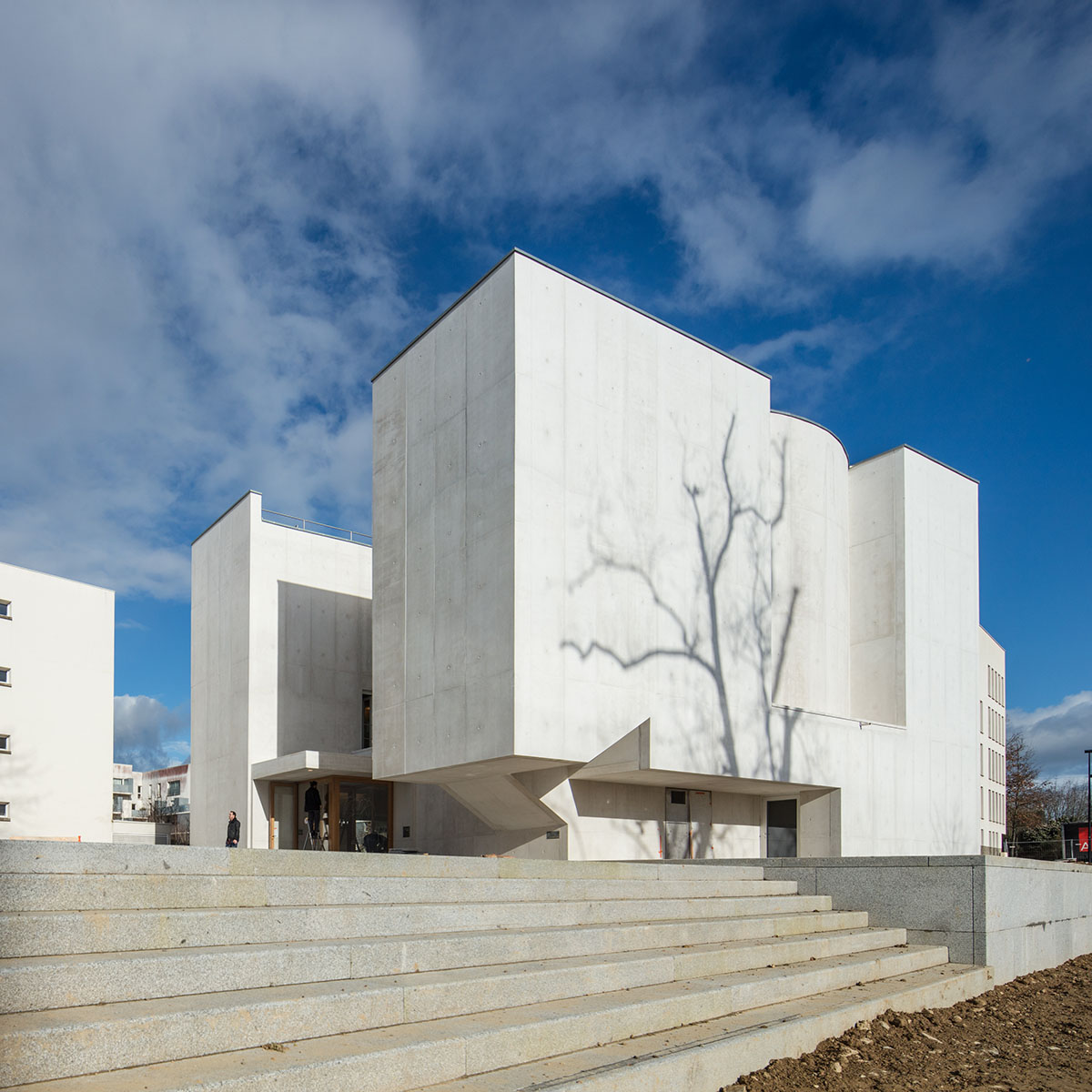 A side chapel to the south contains the baptismal font, a semicircular apse (Chapel A) contains the image of the Virgin and the tabernacle, and a lateral chapel on the north side (Chapel B) contains the crucifix.

A raised platform extends above chapels A and B, the base of the altar and the pulpit. The diagonal axis of the congregation area, which runs from the mam stairs towards the crucifix, defines the position of the attar. 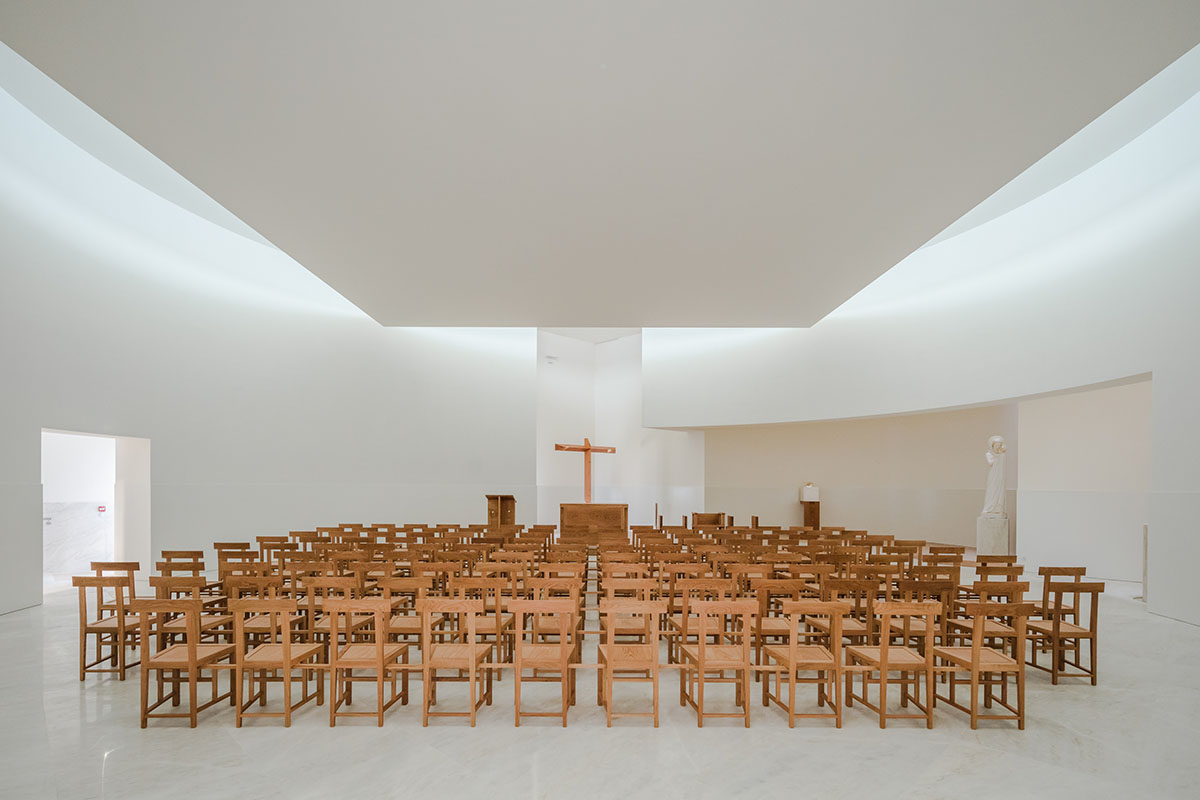 The restricted access sacristy is on the upper floor of the volume containing the lift and the enclosed staircase. A square platform is suspended above the cylindrical space of the church to control the light entering through the clerestory and hold the lighting and ventilation equipment. The sides of this square panel are parallel to the axis of the congregation zone. 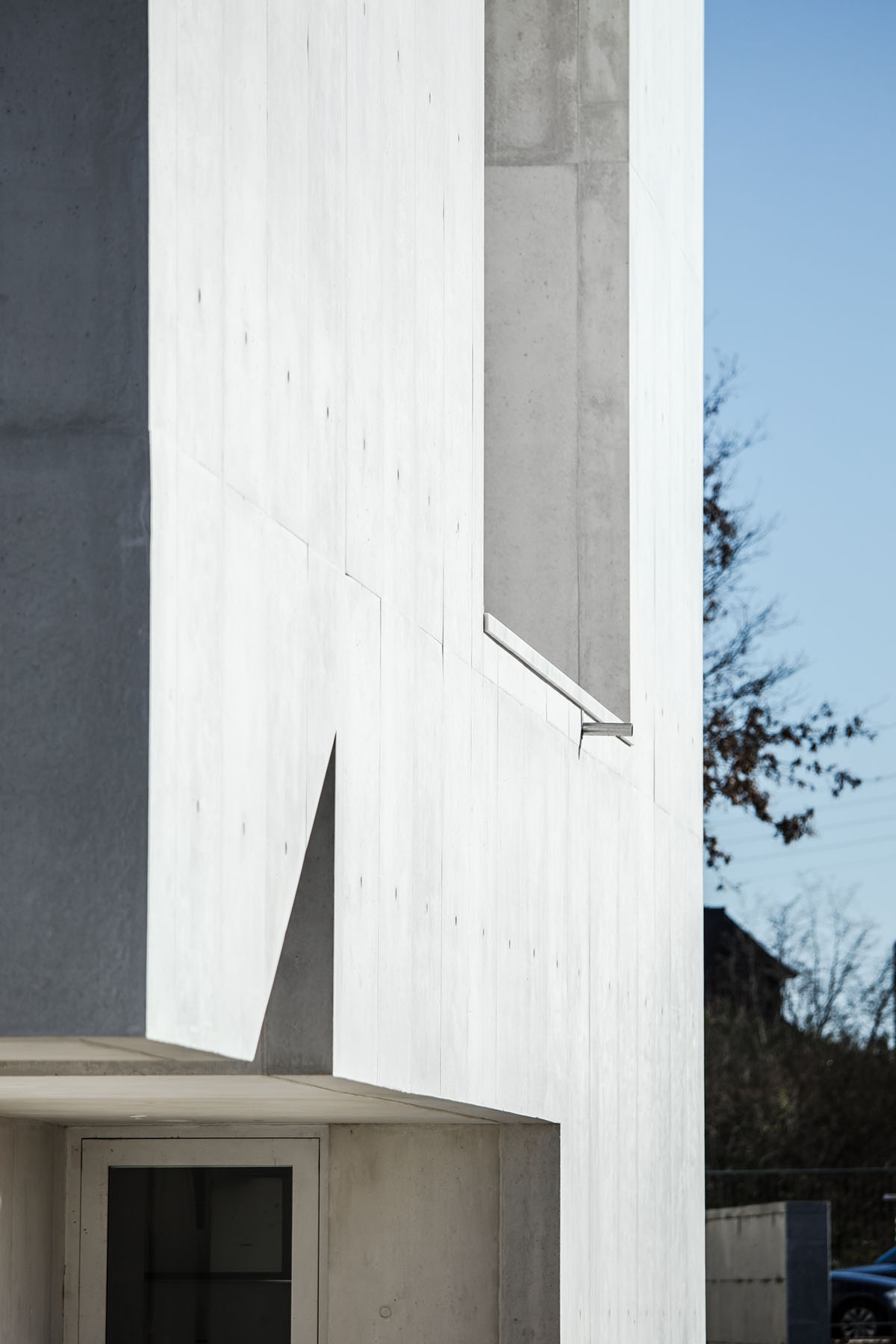 This church is thus lit from above and indirectly, reflecting off the ceiling and the cylindrical walls. Another two small clerestories are set above the image of the Virgin and the baptismal font. 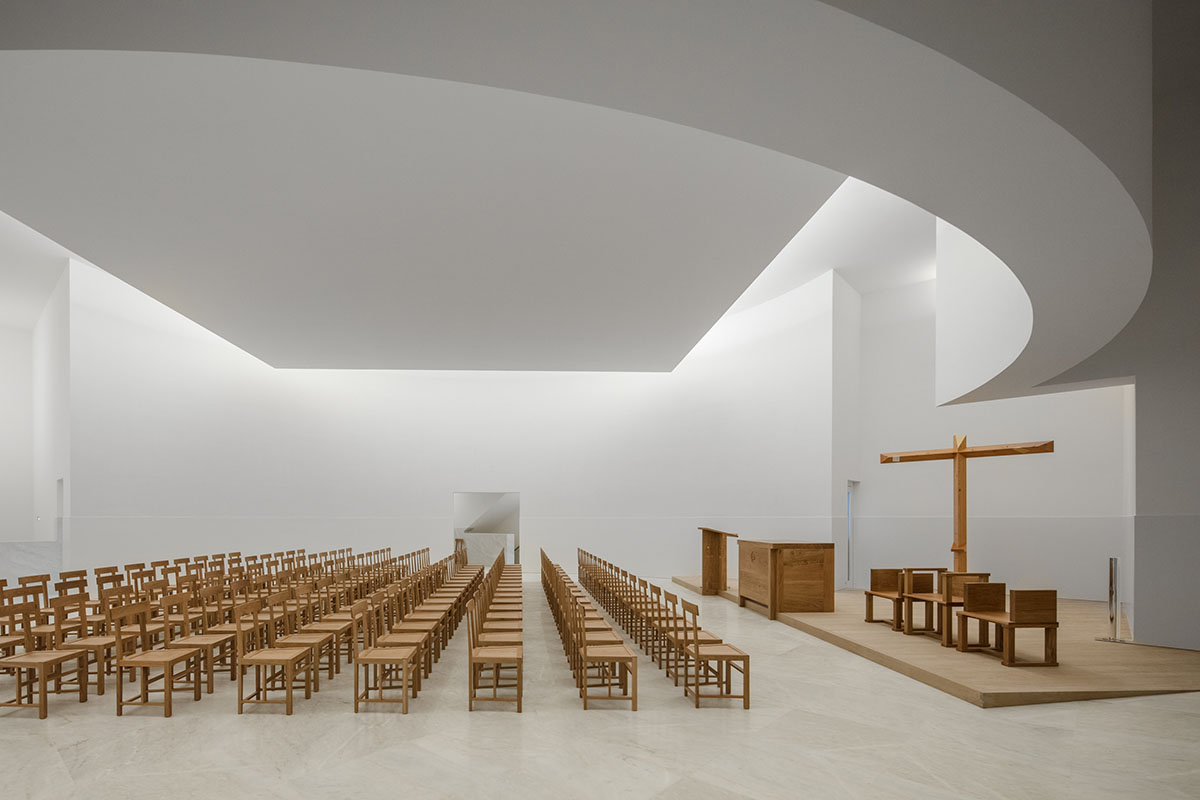 Light enters Chapel B through a glazed west-facing shaft. The church is built by using white reintorced concrete bearer walls with internal thermal insulation. The marks of the formwork used in its construction are still be visible on the facades. The interior of the church and the Parish Centre will be paved with marble. 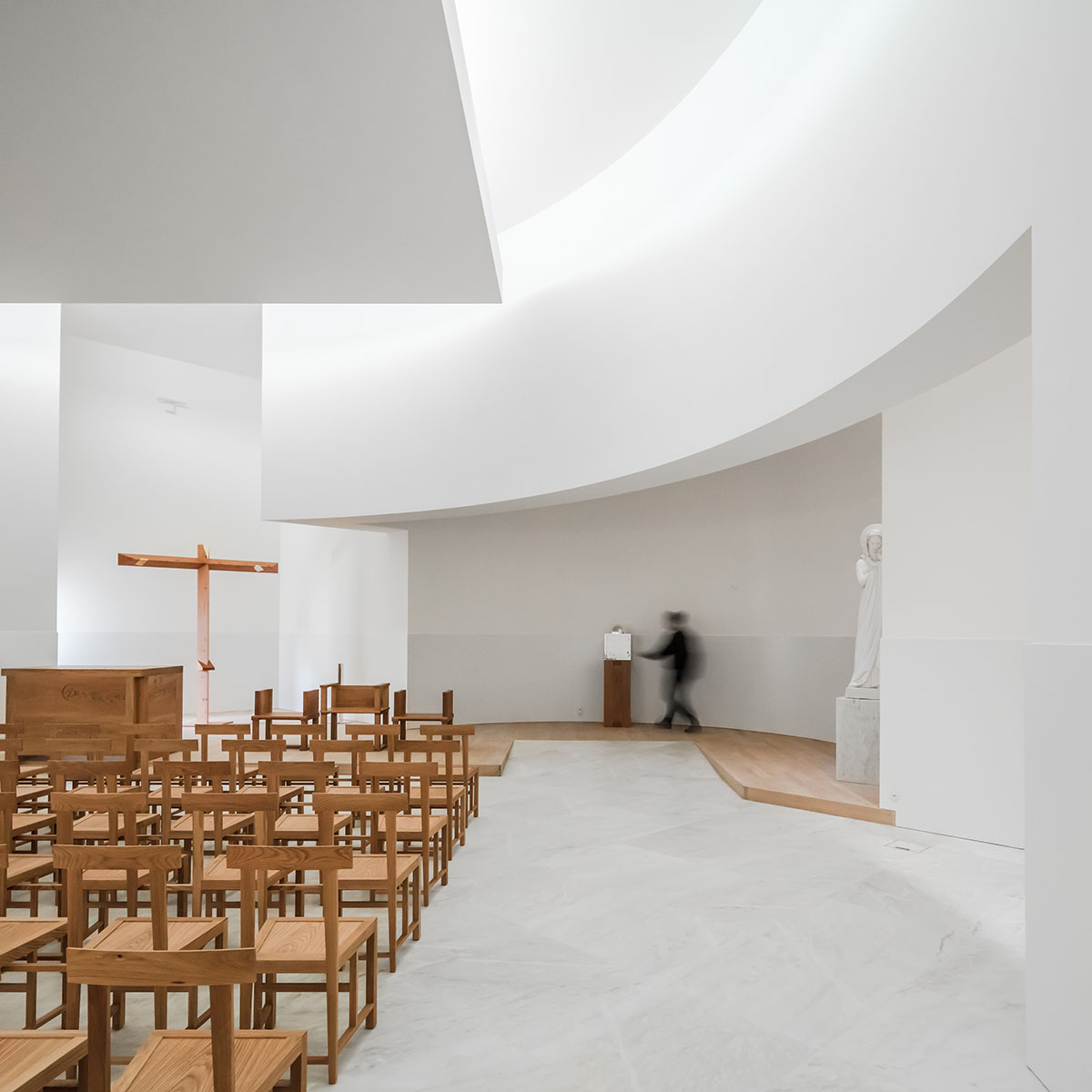 The walls will be painted after installing a 110cm high marble panel, except for the kitchen and bathrooms, where it will rise to 220cm. The pavements in the basement will have an epoxy finish and 220cm high epoxy wall protection.The studio uses wood for the exterior frames with an aluminium finish on the outer face. 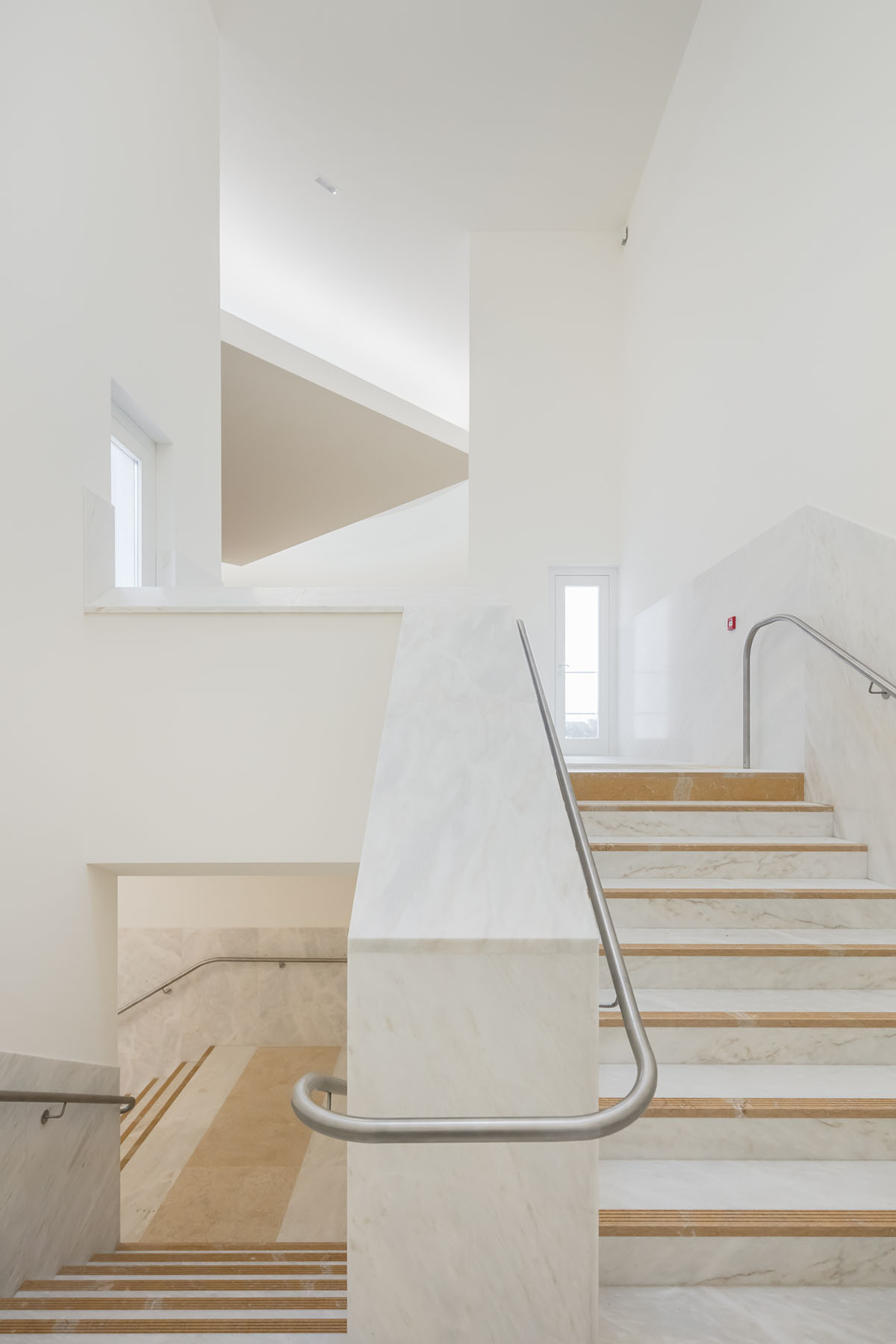 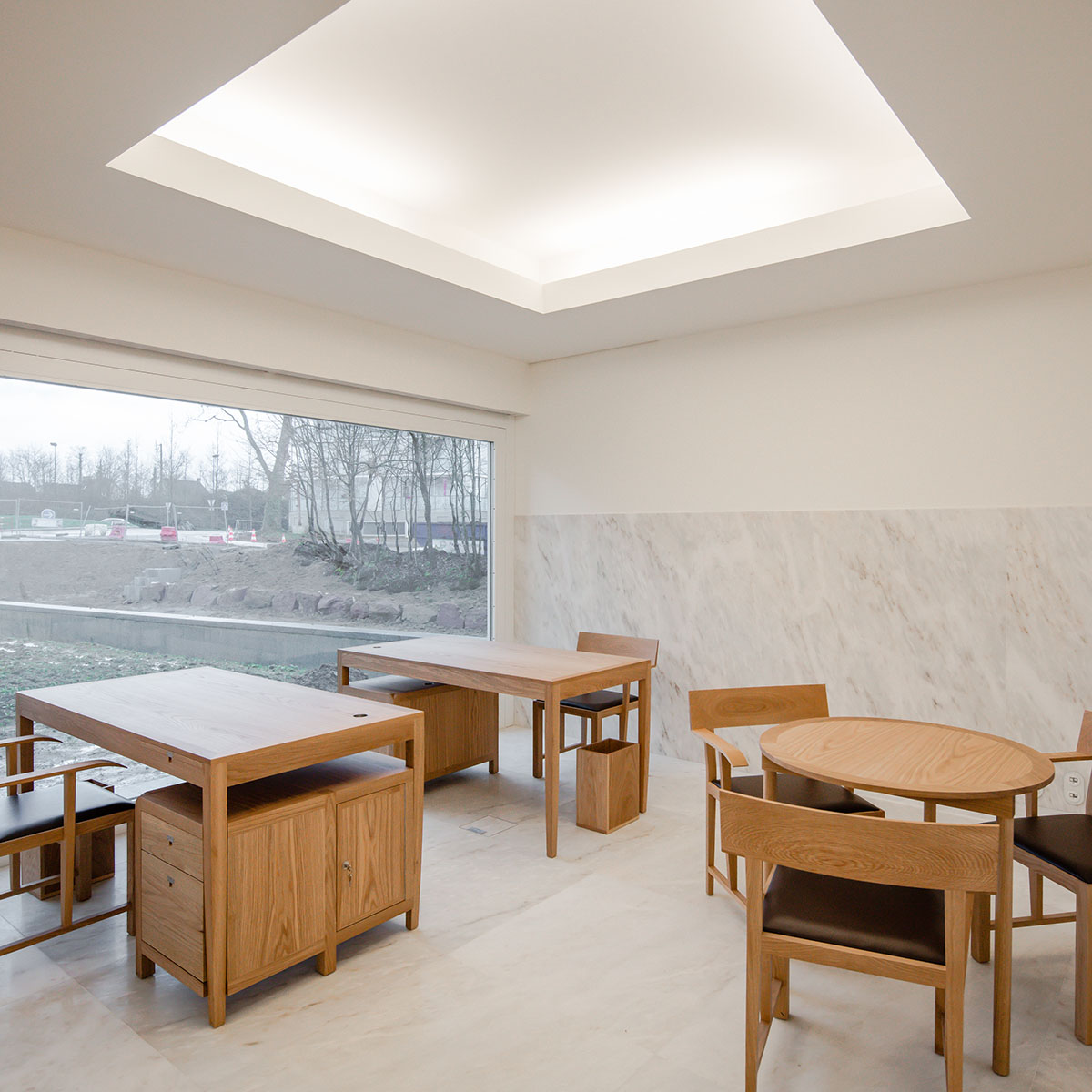 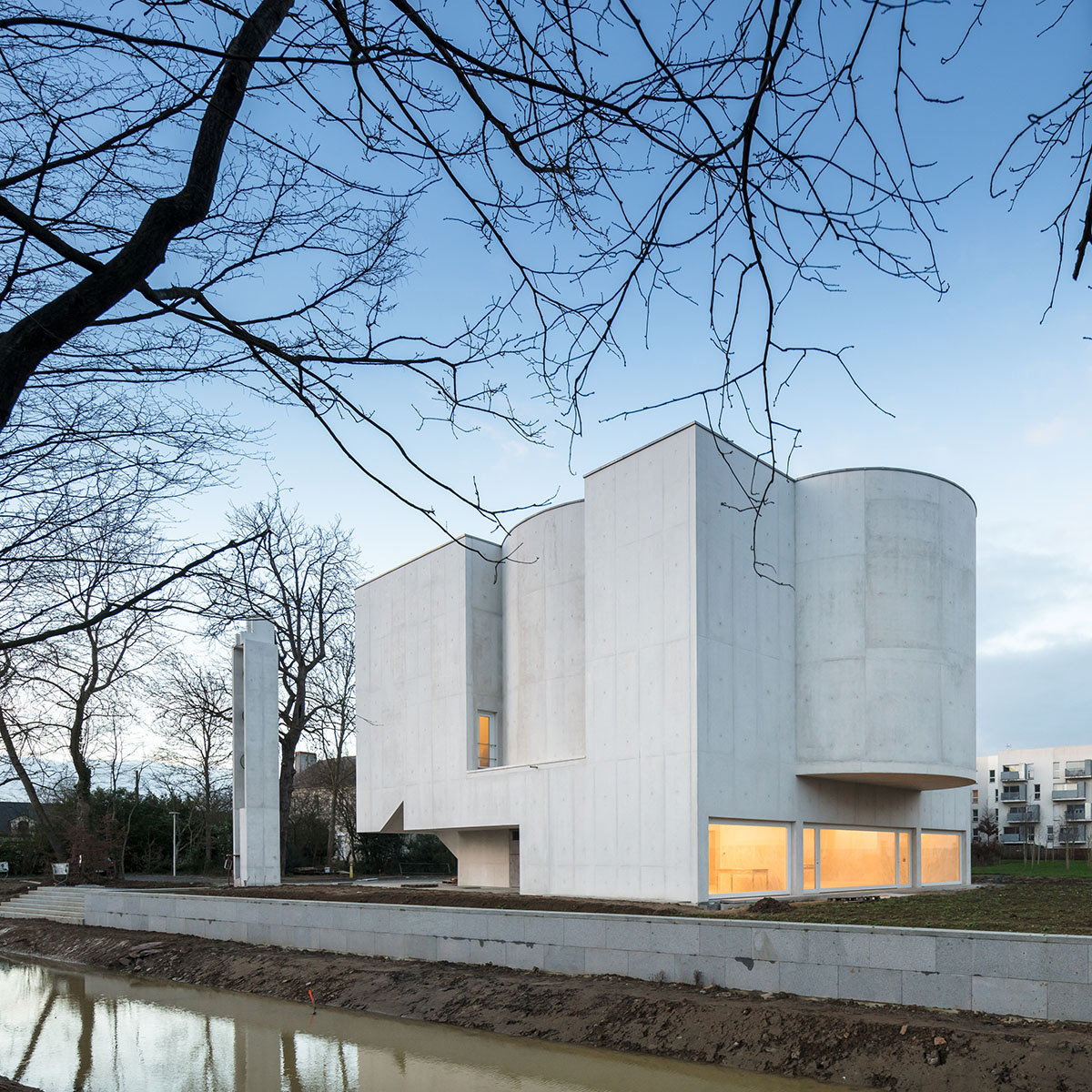 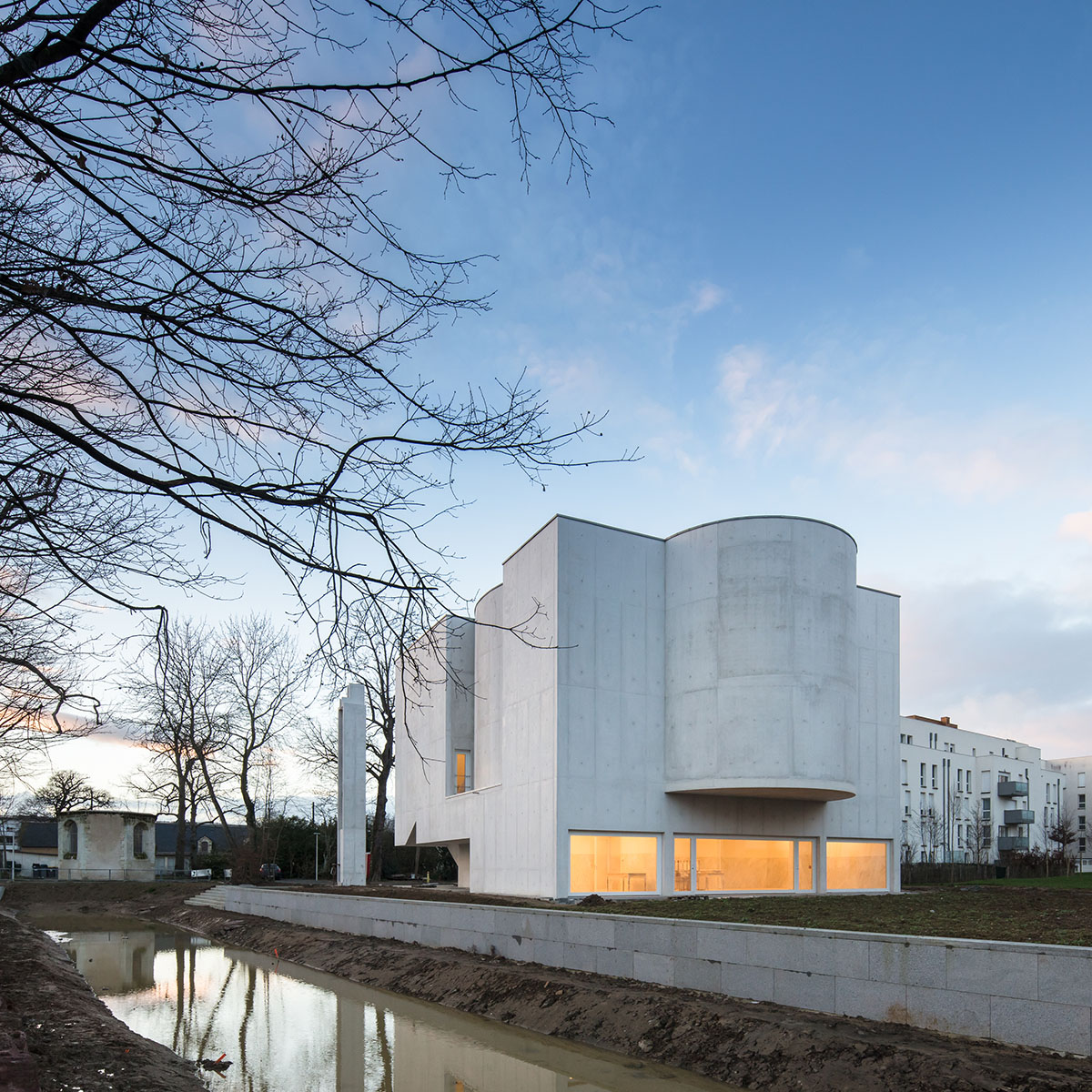 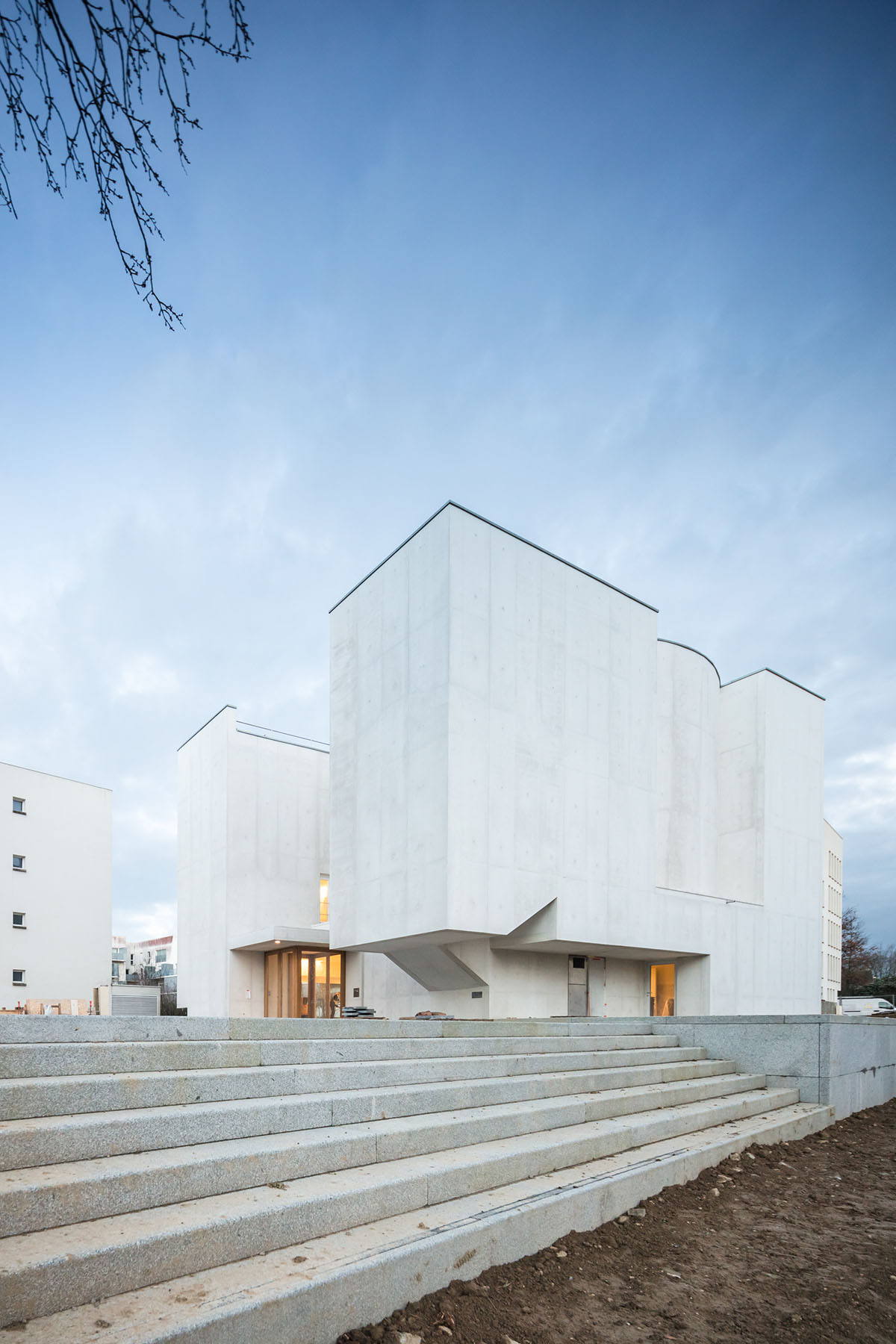