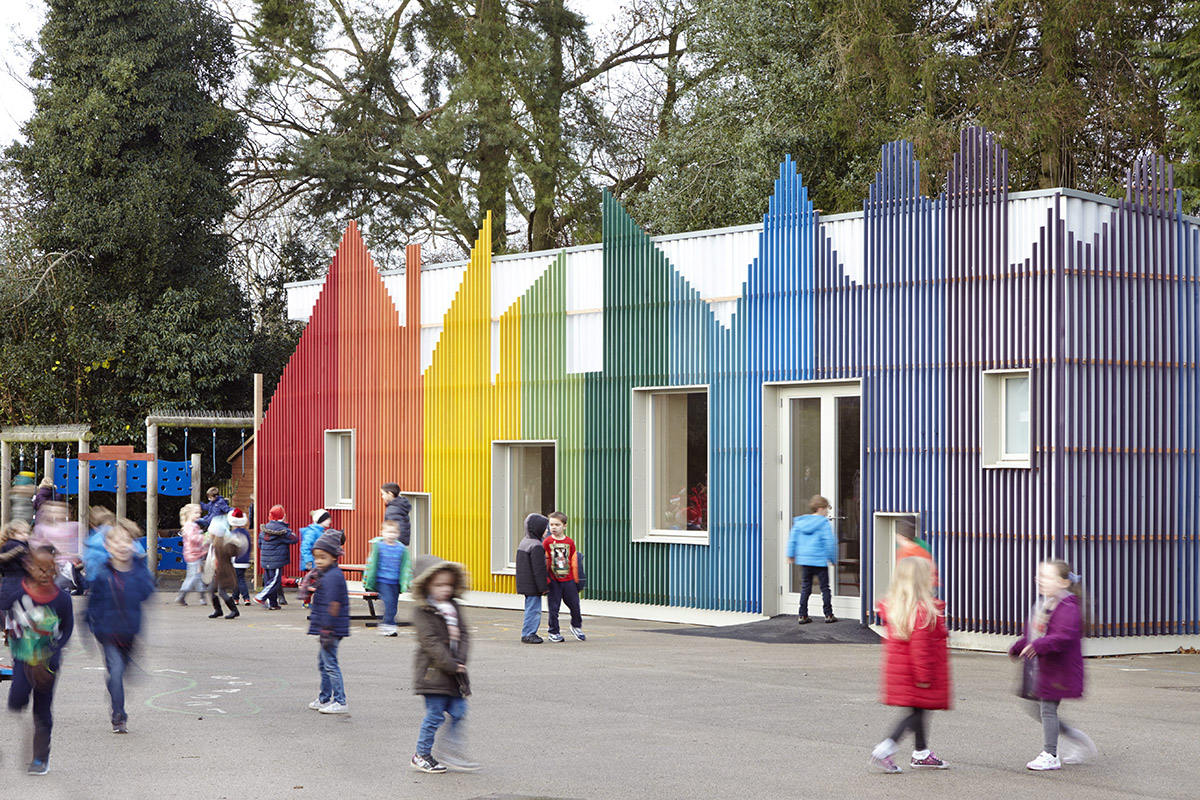 London-based architecture firm De Rosee Sa completes Roald Dahl inspired dining hall at Prestwood Infant School in UK. Much-loved children’s author Roald Dahl was the inspiration for a new dining hall and after school facility in Buckinghamshire’s Prestwood Infant School. The author – who lived locally – had already apparently based the headteacher Miss Trunchbull in his popular book Matilda on a former real-life headteacher at the school.

Architects De Rosee Sa and PMR turned to the pages of Dahl’s books again for the new dining hall – and this time drew from the story of Fantastic Mr Fox. The cunning character inspired them by declaring he intended to make “A little underground village, with streets and houses on each side – separate houses for badgers and moles and rabbits and weasels and foxes.” He then added: “And every day I will go shopping for you all. And every day we will eat like kings”. 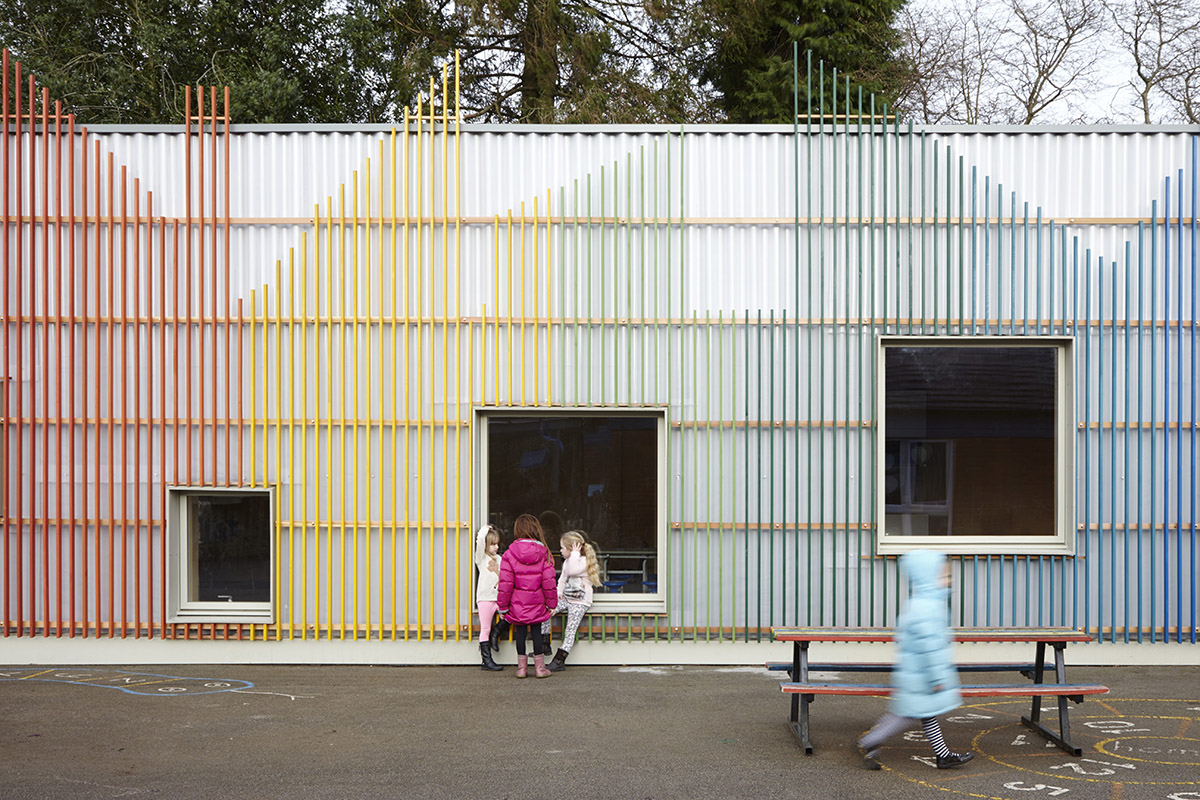 The £158,000 colourful new building is called Little Hall and will also be rented out as a facility for the local community, bringing in much-needed revenue for the school. It has playful features such as a small one-to-one teaching space and two WC’s painted to depict a fox’s den, a bush with berries and lastly Mr Fox’s tail. A large plywood bookcase runs the full length of the front of the building with window seats for reading.

Each class of pupils in the building is named after an animal and matched with a window or doorway, to signify their part in the ‘underground village.’ The dining hall contains a kitchenette and a servery for the provision of hot school meals for up to 96 children, as well as refreshment facilities for the after-school club. The project itself was as a result of the government’s Hot Dinners initiative. Little Hall has six skylights allowing plenty of natural daylight as well as sustainable internal plywood and concrete flooring. Contractor for the project was RIR Construction Limited. 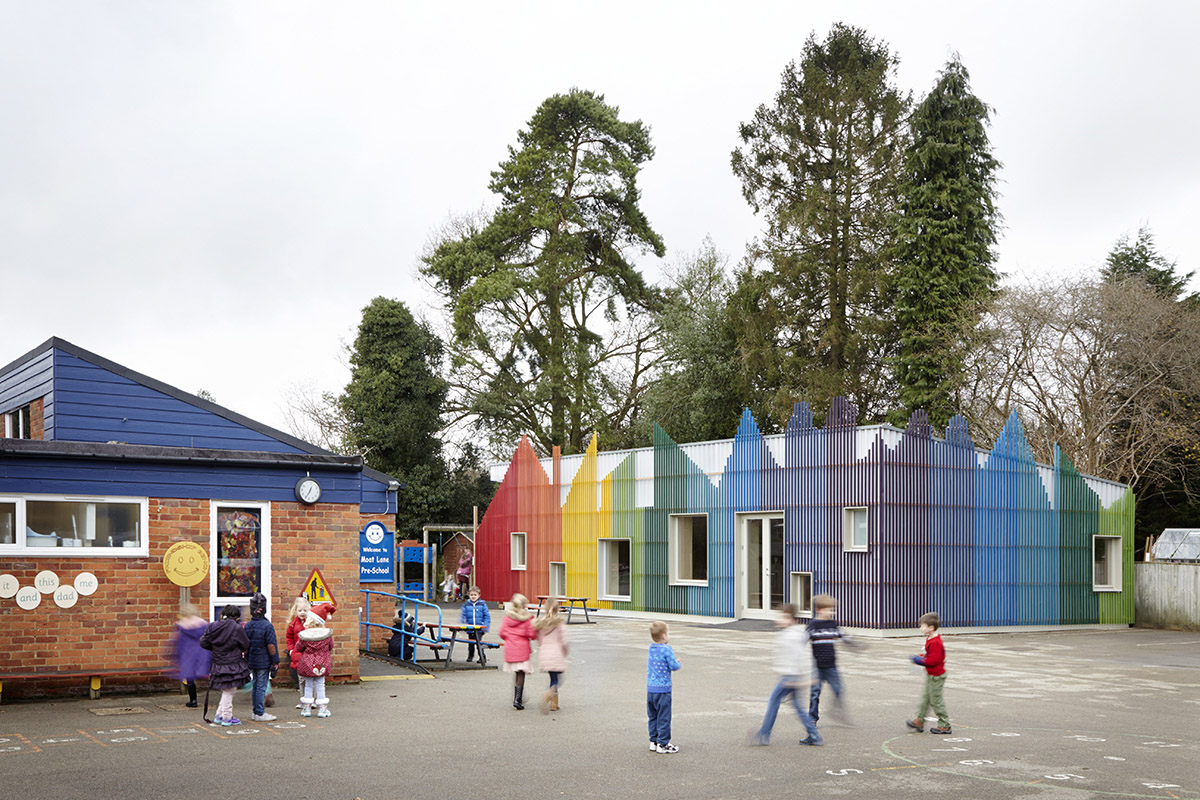 Nicola Raher, head teacher said: "We are absolutely delighted with our new Little Hall, there was much excitement amongst the children on the first day of term when they learnt they were going to have their lunch in the new building. The atmosphere was amazing, and having children in the building made it really come alive. The Little Hall is exactly as I wanted, a fun building that was unique and had the WOW factor. De Rosee Sa and PMR were determined to complete the project within budget without compromising the quality of materials used. I am delighted that the excitement continues daily, the children love the building and have found every possible space and area to play in. Children will always learn more effectively if they are inspired and happy, the Little Hall truly does this for our children at Prestwood Infant School." 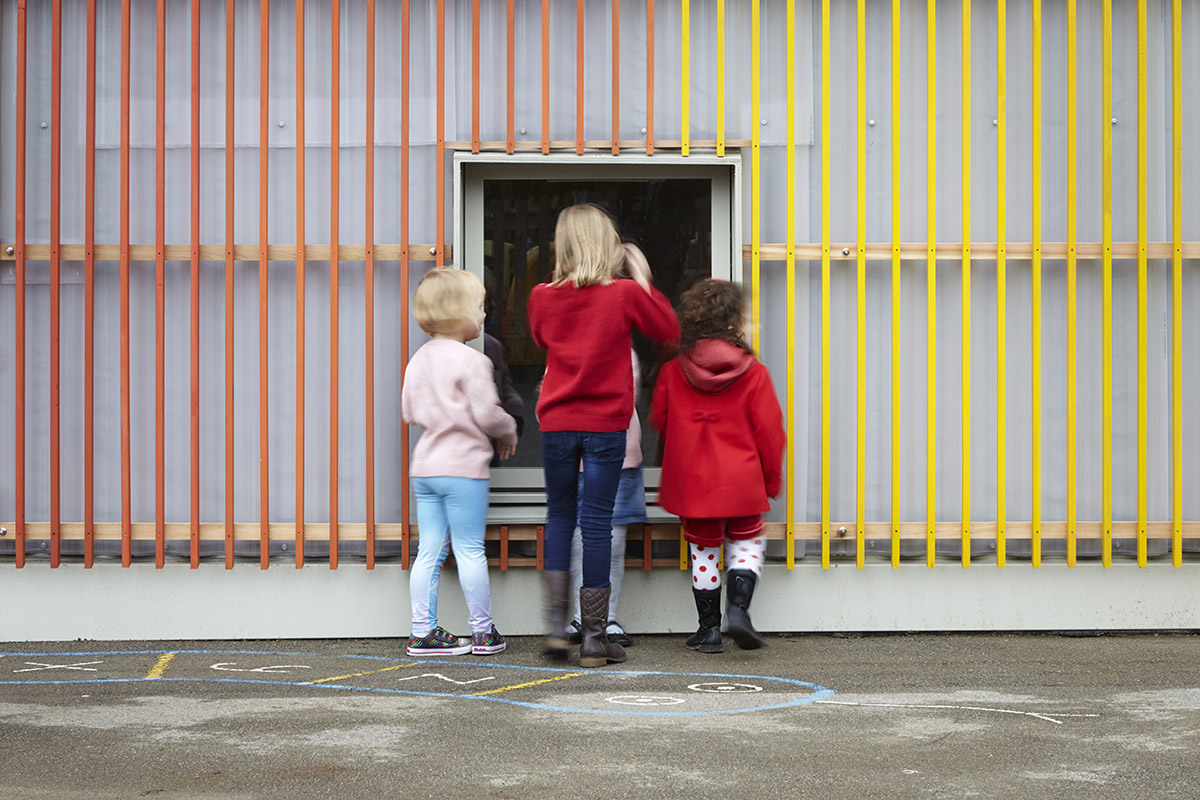 Max de Rosee, Director of De Rosee Sa said he enjoyed the reaction of the pupils when they went to explore their new facility. “It has been incredibly rewarding for us as architects to see the delight on the pupil’s faces,” he said. “Design has great potential to inspire and it is our job as architects to push that agenda. We wanted to give the children something really special. Now they can refer to Roald Dahl when describing their school. De Rosee chose simple materials to allow him to deliver a building, which was “clean and crisp” while also being “playful and visually-stimulating.” 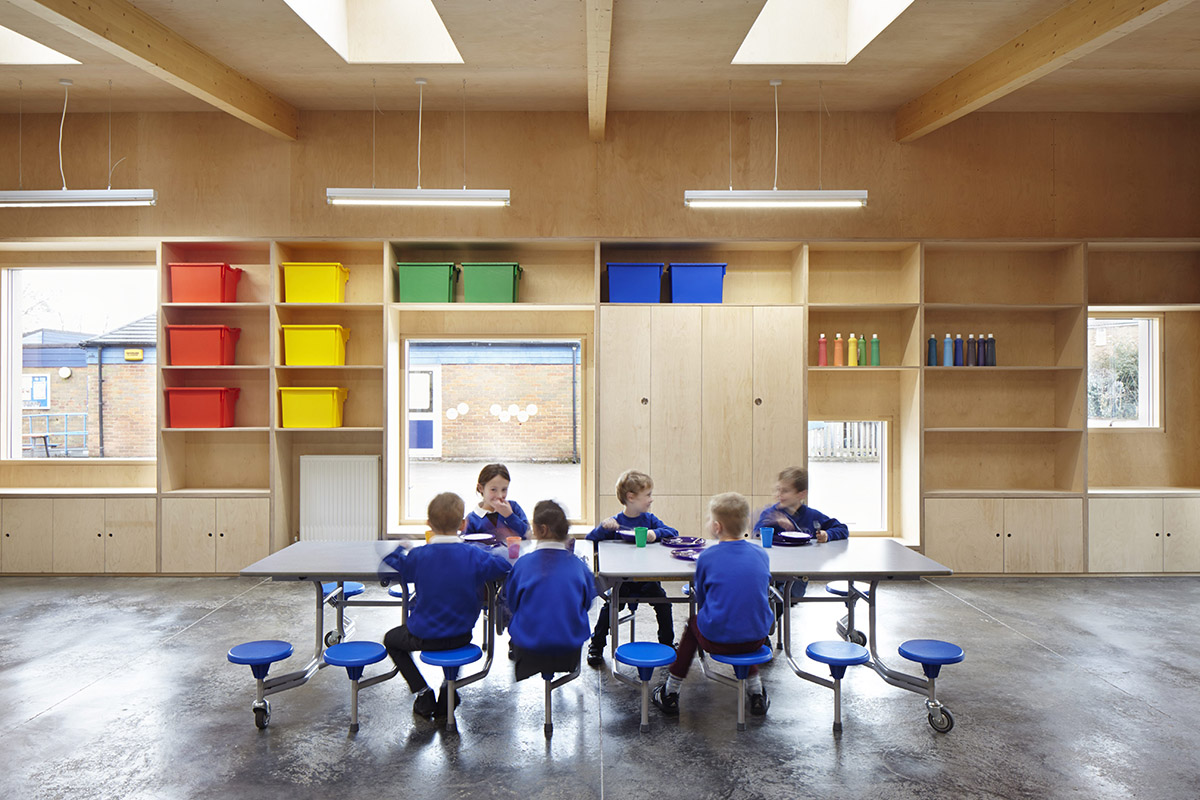 He added: “We tried as much as possible to use off-the-shelf materials. Where wet trades could not be avoided, we wanted to use them as the finishes. There were a few technical issues that had to resolved including how to use the concrete structural slab as the actual floor finish and how to achieve the colour graduation on the timber battens with only five base colours.” 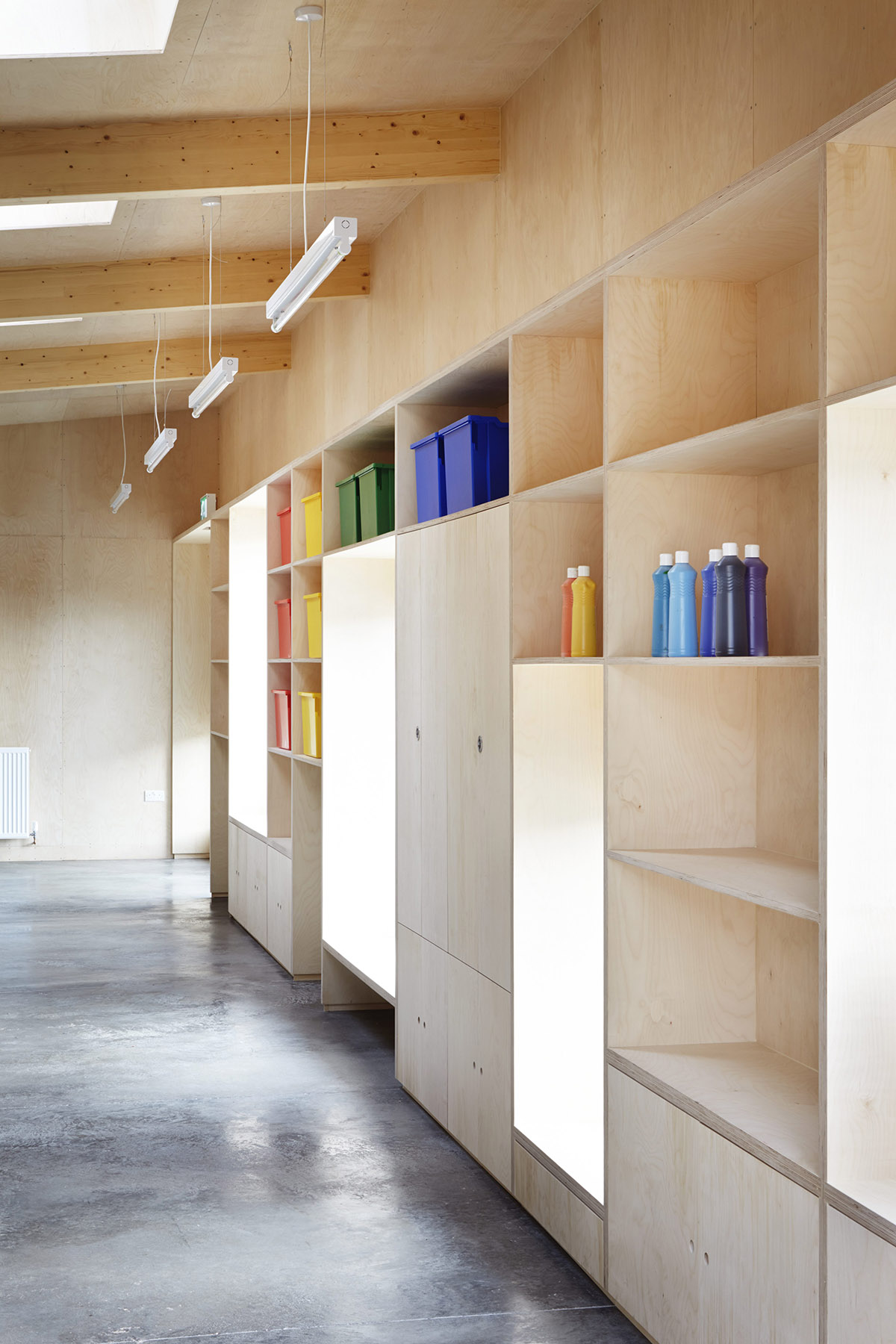 The timber frame construction on the Little Hall is clad on two facades with a white corrugated polycarbonate from Rockwell and cement board cladding from James Hardie on the remaining two facades. The colourful rain-screen cladding comprises western red cedar battens, which were stained before being positioned into place. The profile of the rain-screen matches the roof pitches of the existing school’s buildings to link the new structure to the old buildings. Internal plywood is sealed with a protective matt coat of varnish to give the material a durable finish. 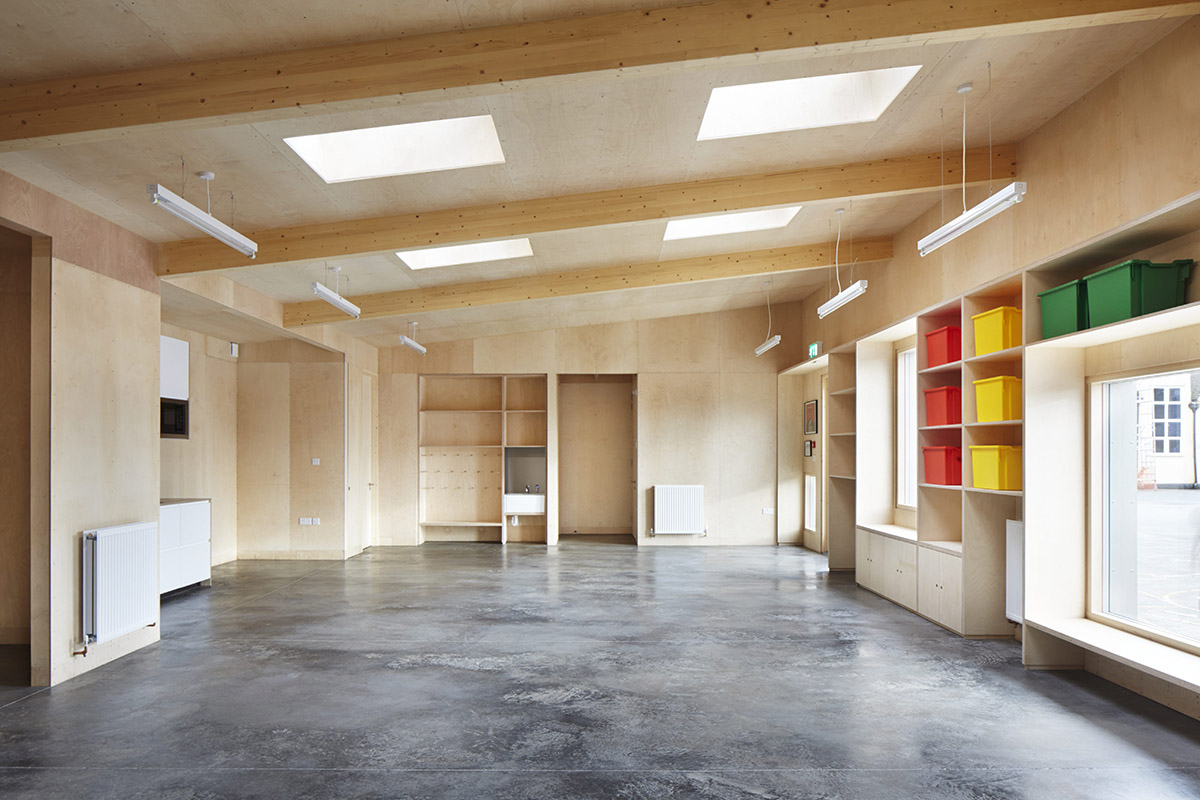 The structural slab was power-floated and polished to create a seamless, hardwearing floor finish on a small budget, thereby avoiding the need for a separate floor finish. The insulation runs under the structural slab, allowing the top edge to be used as the floor finish. To keep costs down, a basic exposed plywood interior has been used, while externally, a colour stained timber rainscreen which playfully references the existing roofline of the school’s main hall. The contract used was a JCT Minor Works Building Contract 2011 with Contractors Design Portion. 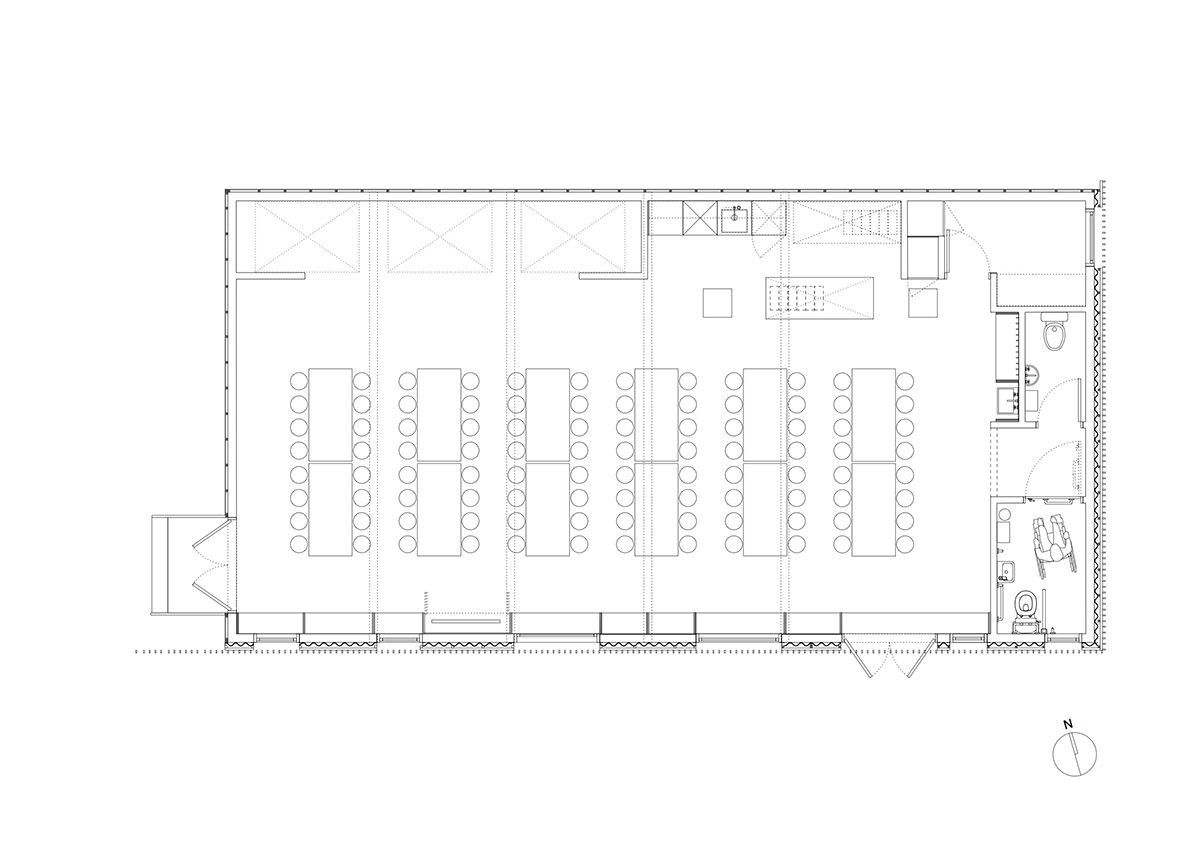 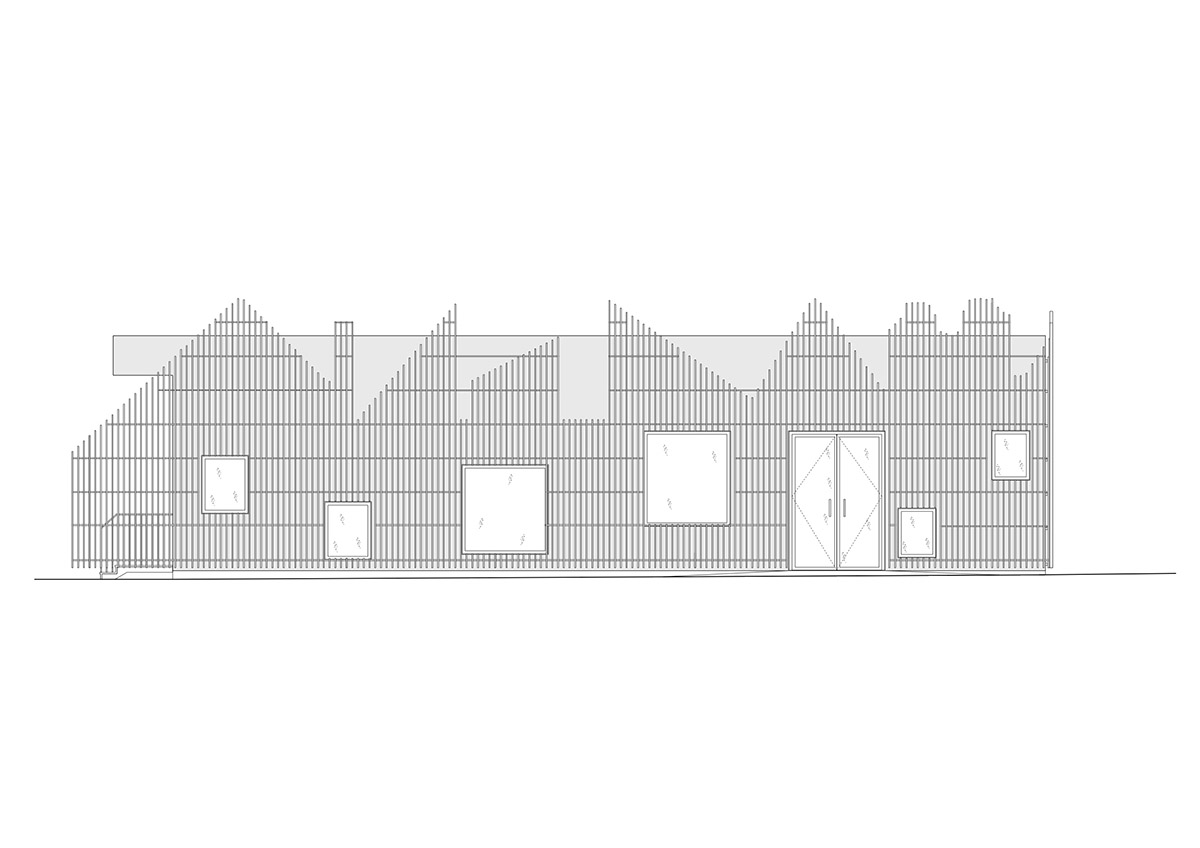 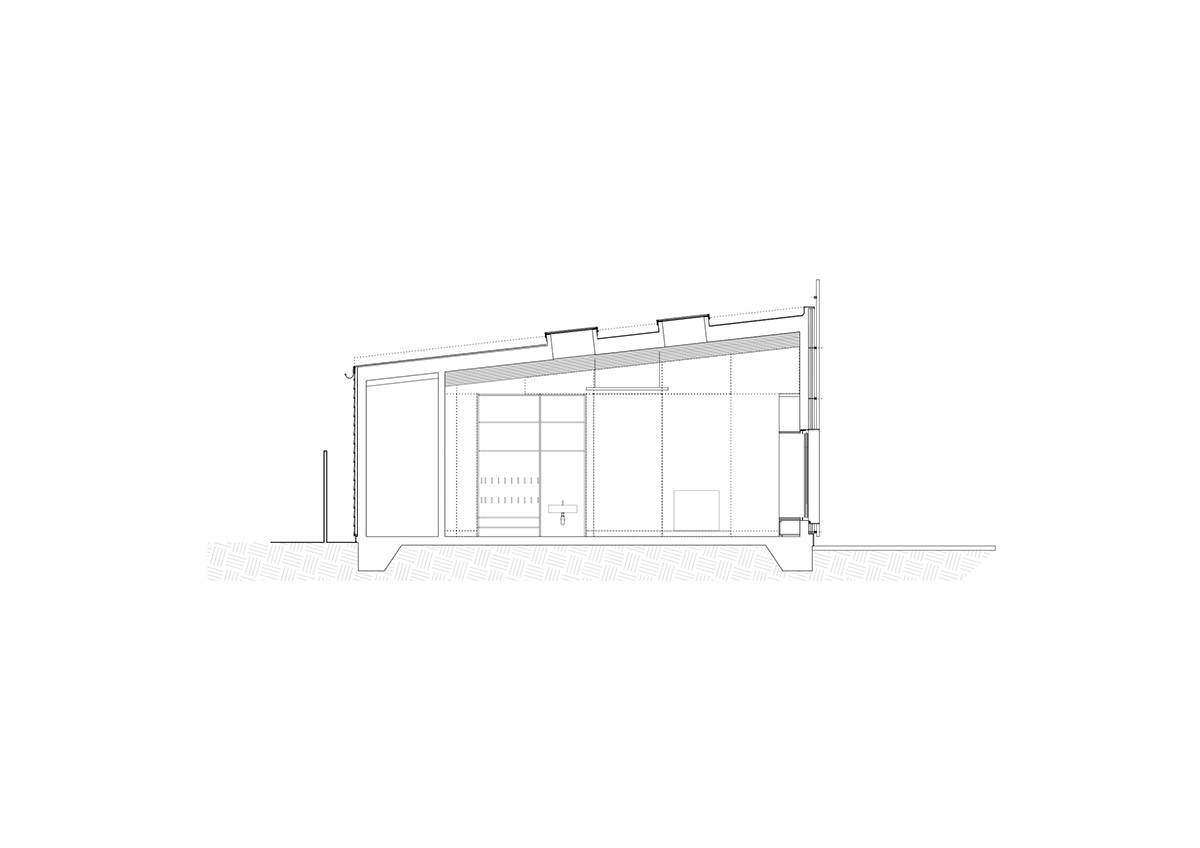 The Little Hall side elevation