World-renowned Dutch architecture practice UNStudio, in collaboration with Werner Sobek, has unveiled plans for a new kind of high-rise which will be built in Dubai and will feature one of the world’s tallest ceramic facades with a shimmering look overlooking existing towers. Developed by the Wasl Development Group, the curvaceous-formed tower will act as a landmark for both the region and for the Wasl Development Group itself.

Located in an exceptional central position in Dubai’s network - along Sheikh Zayed Road, the main thoroughfare that connects the Emirates north to south - and directly opposite the Burj Khalifa and when completed, it will be one of the world’s tallest ceramic facades.

The slender 300-metre tall super-high-rise takes cues from the infrastructural arrangement of Dubai resembling "evolving organism in the dark desert" and the project reflects the notion of these connections.

Adopting a classic 'contrapposto' movement, the mixed-use tower faces in almost every direction and offers public areas high up in the building. The tower will include a mixed-use programme, comprising offices, guest rooms, public areas and apartments, presented a challenging core configuration. 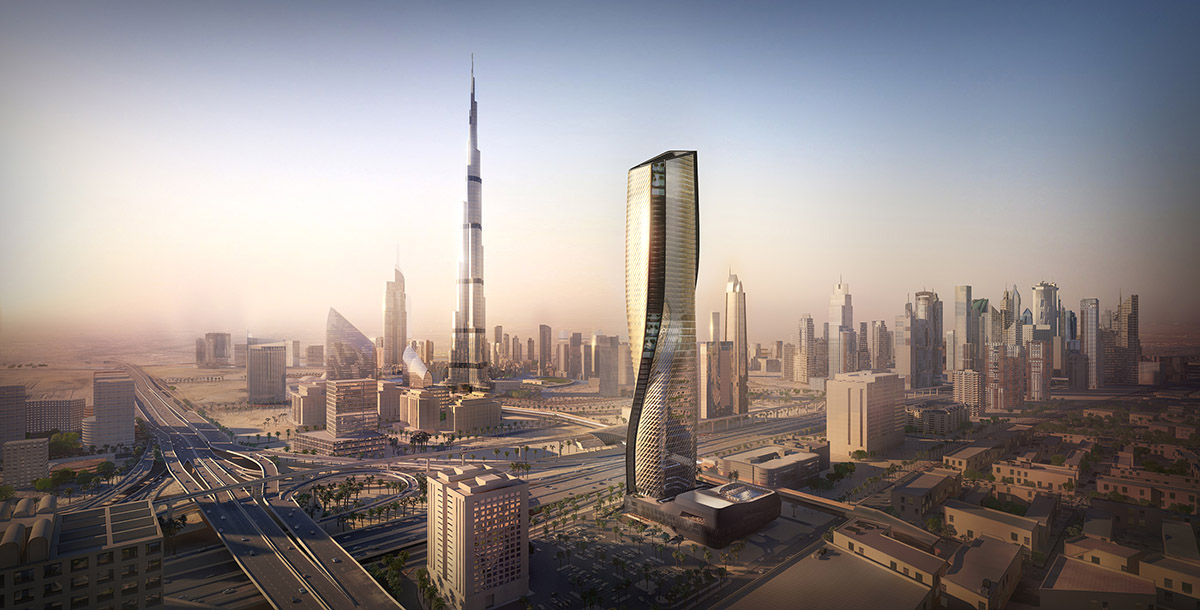 "As the project strongly relates to and interconnects with Dubai's urban experience, the aim is to make a visit to the Wasl Tower as attractive and contemporary as possible. As such a dedicated concept of health, comfort and well-being throughout was developed for the building," said Ben van Berkel, Principal of UNStudio.

"UNStudio's design is closely interlinked with the engineering and sustainability concept developed by Werner Sobek. This close cooperation defines scale, light, building physics and materialisation. In addition, smart access, communication and security provide a seamless technological base which is integrated with the architecture," said UNStudio. 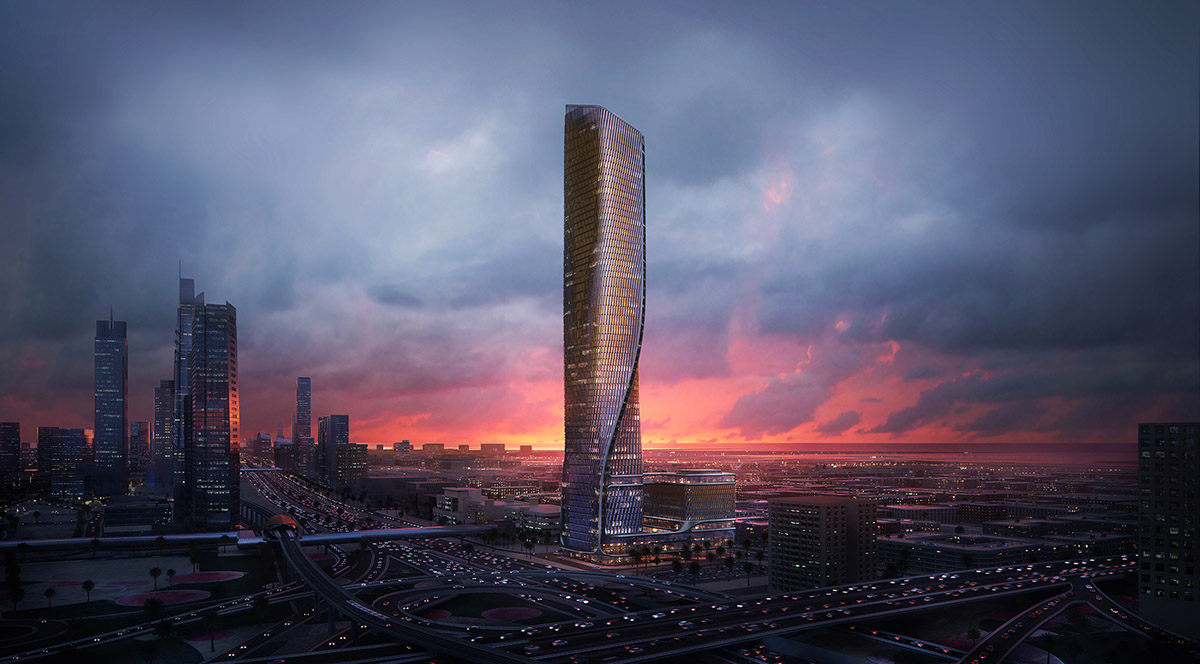 The studio uses clean materials, interactive light levels, in addition to good acoustics which will be implemented in all spaces throughout the building. Particularly on the public levels, when combined with a specific food experience, hosting and aesthetics, they will result in a seductive activation of the human senses.

"Wasl Tower will be one of the world’s tallest ceramic facades. In consultation with the client, clay was chosen as a basic material, as such the facade fins will be manufactured as low-tech glazed ceramic elements," added the studio. 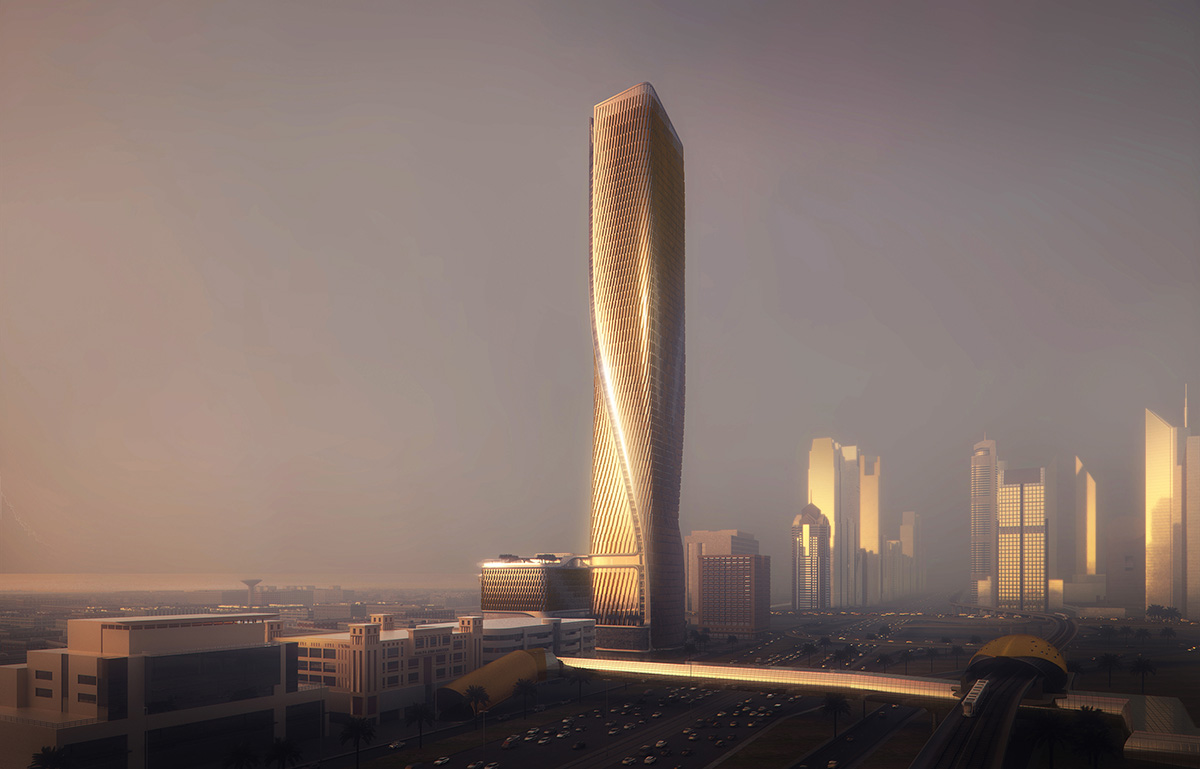 UNStudio, best known with its parametric designs in architecture and urbanism, forms a special geometry for the tower referring to its holistic appearance by means of innovative parametric design and high-tech engineering. The studio uses highly-innovative sustainable measures required for Dubai's region, which are seamlessly implemented into the design.

On the facade a fine lace of inclined fins over the basic skin literally veils the geometry and provides the required 'closed' surfaces. These fins not only provide shade, but also reflect daylight deep into the tower’s interior. 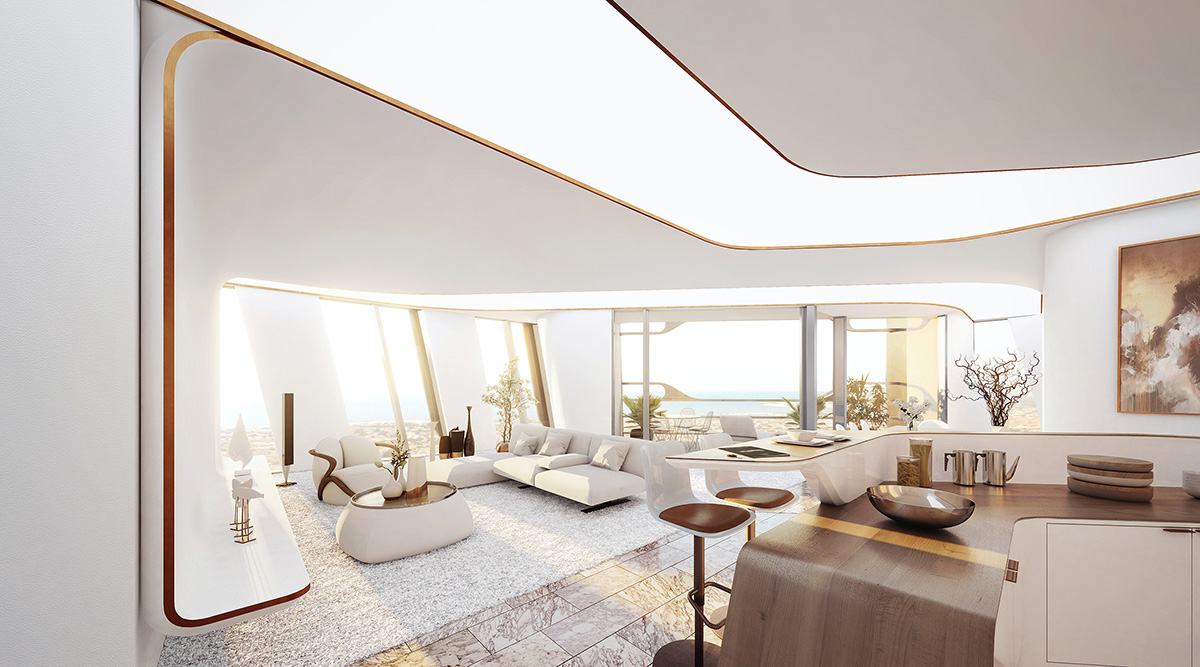 A 'vertical boulevard' will run the full height of the tower and infinity pools will be situated on the roof of the tower to provide magnificent view overlooking to the city. This seam is created by a stacking of outdoor balconies and forms a green vein which also affords a glimpse of the interior of the building. The boulevard connects the outdoor with the indoor and is a unique feature for the region.

UNStudio is closely working with Arup Lighting for facade lighting housed behind the fins. The lighting of the tower is programmed as a rhythmic animation that breathes with the cadence of this 24-hour metropole and provides a visual connection to the city. This facade lighting is powered the energy cube pv panels located on the car park building. 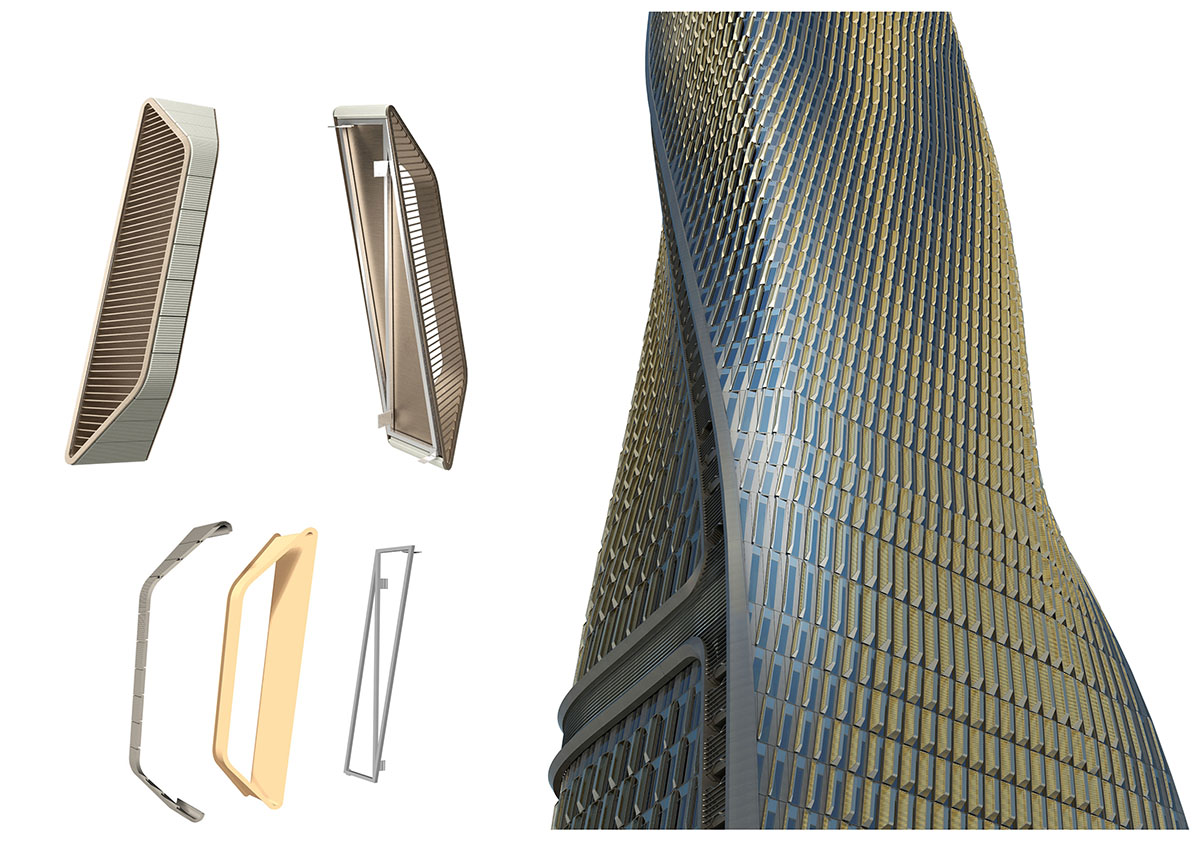 Meanwhile a vertical transport strategy is implemented to facilitate separate access to the various programmes. Three high-speed express lifts connect the four main lobbies (ground / spa /sky and rooftop) which contain most of the public programme and the main access for the hotel (at 150 metres).

Four office and four guestroom lifts share the same lift shaft, while the residential apartments on the higher levels have their own designated lift-group, making direct access via the basement parking possible. In total the building provides 17 lifts, of which 5 are service elevators. 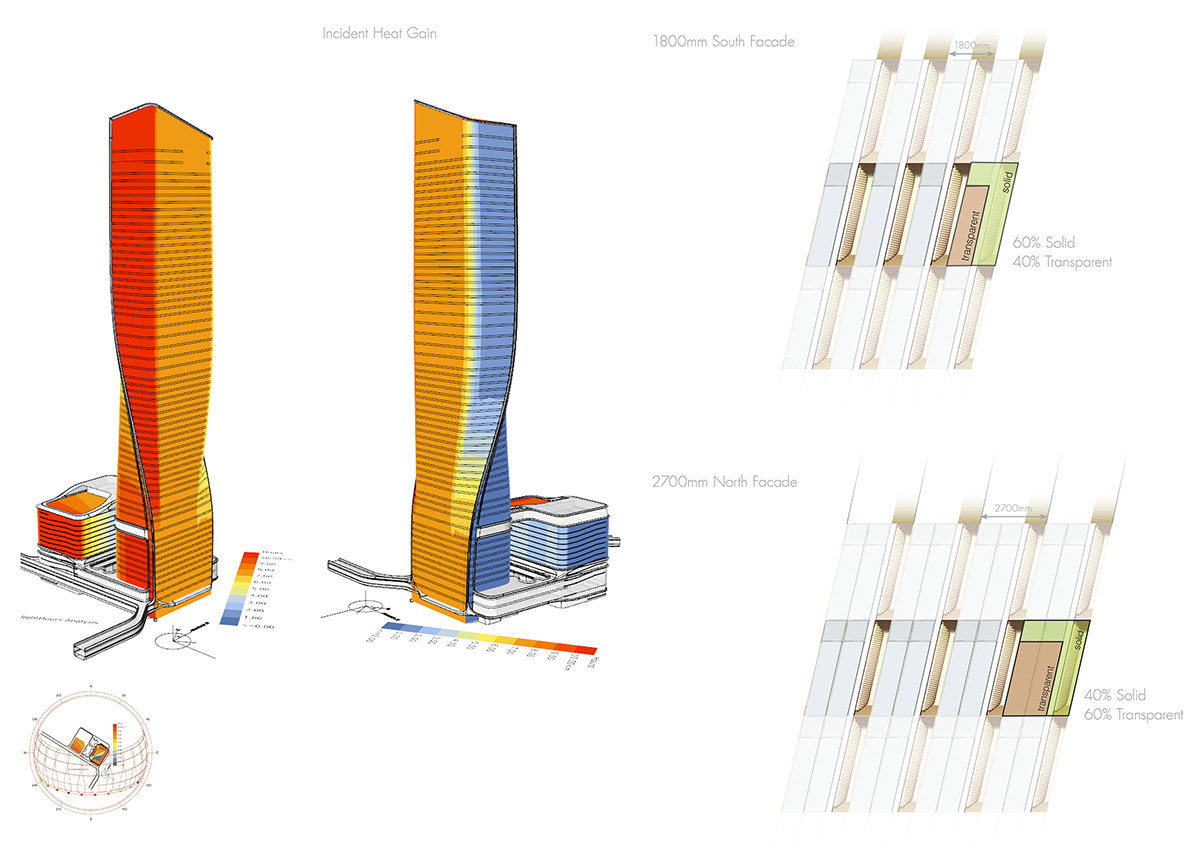 The tower is supported by a low rise car-park building which, uniquely, also houses a large, column-free ballroom on the first floor. Programming this element in this location provided the advantage that the ground floor lobby now spans the full premises and creates a ‘walled’ garden, providing shade and cooling, even during the summer months.

The roof of the car park building is a large outdoor pool deck and is connected to the spa lobby in the tower via a pedestrian bridge, which provides access for all guests and visitors. 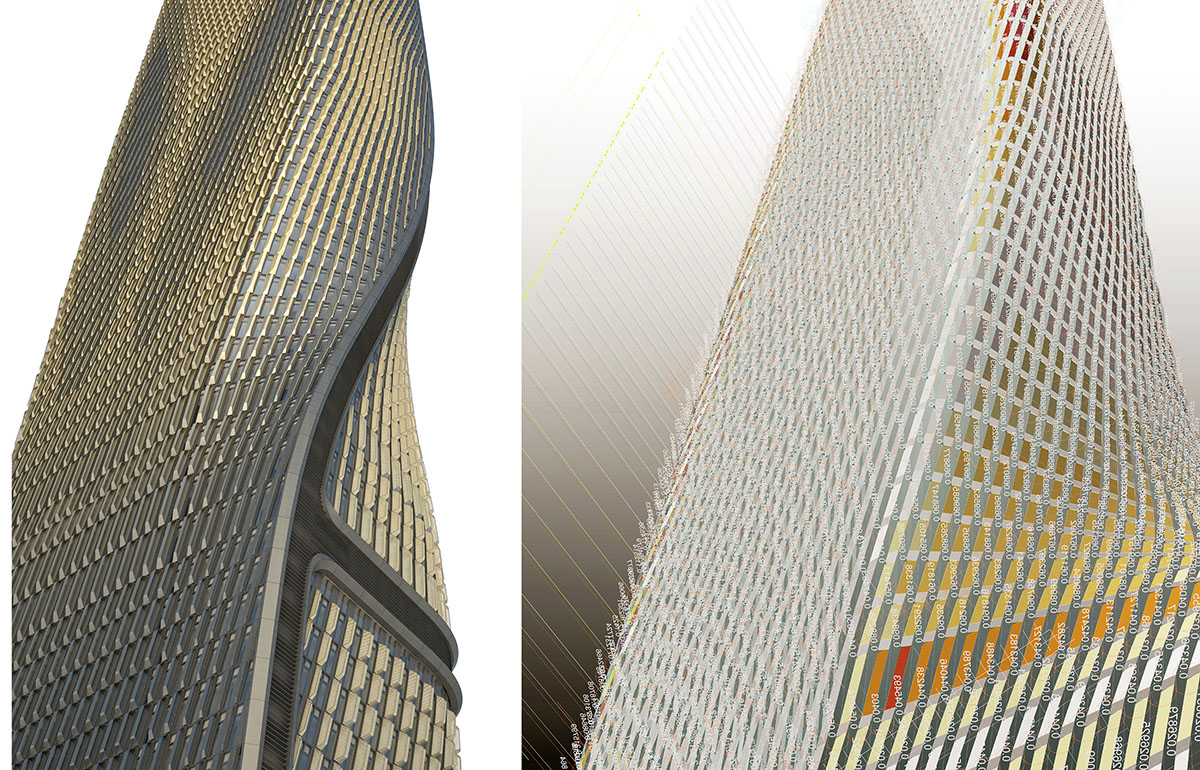 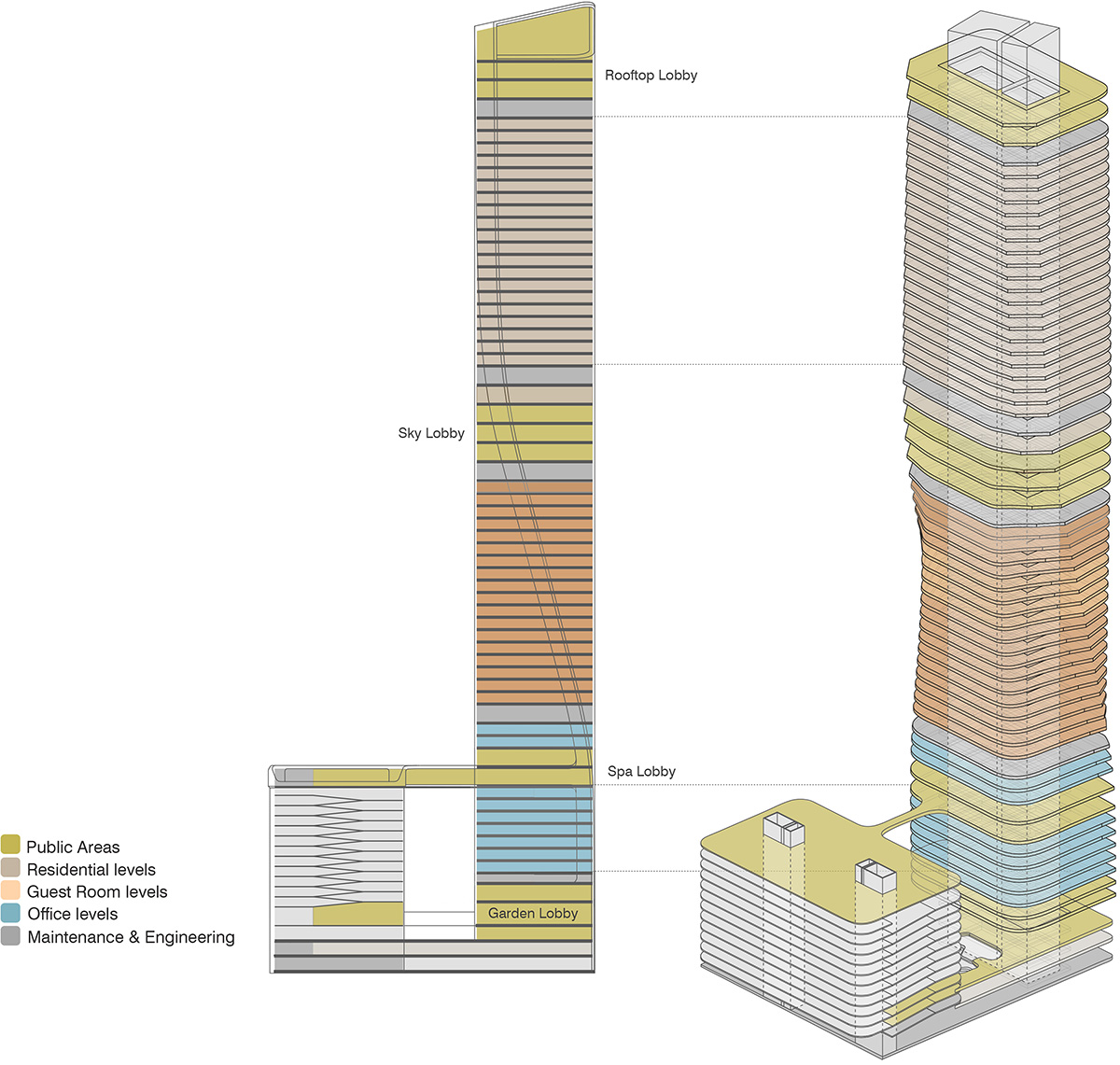 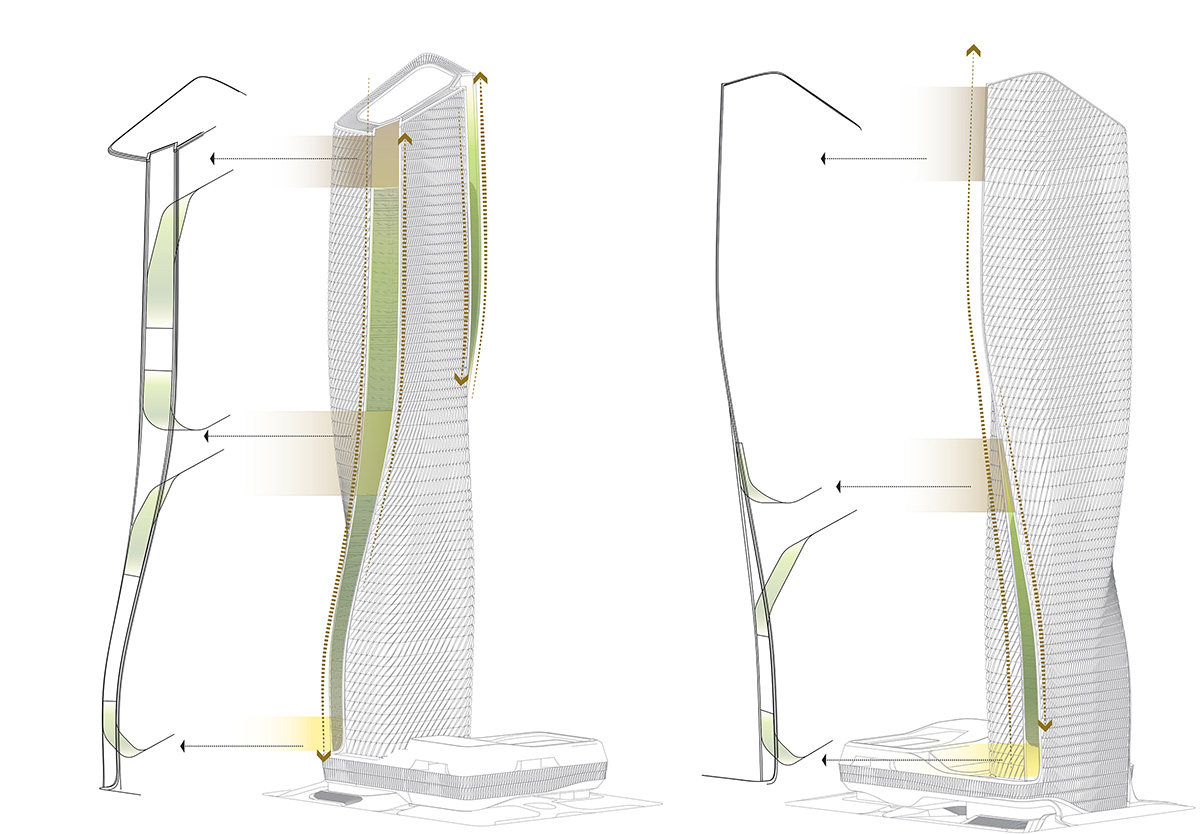 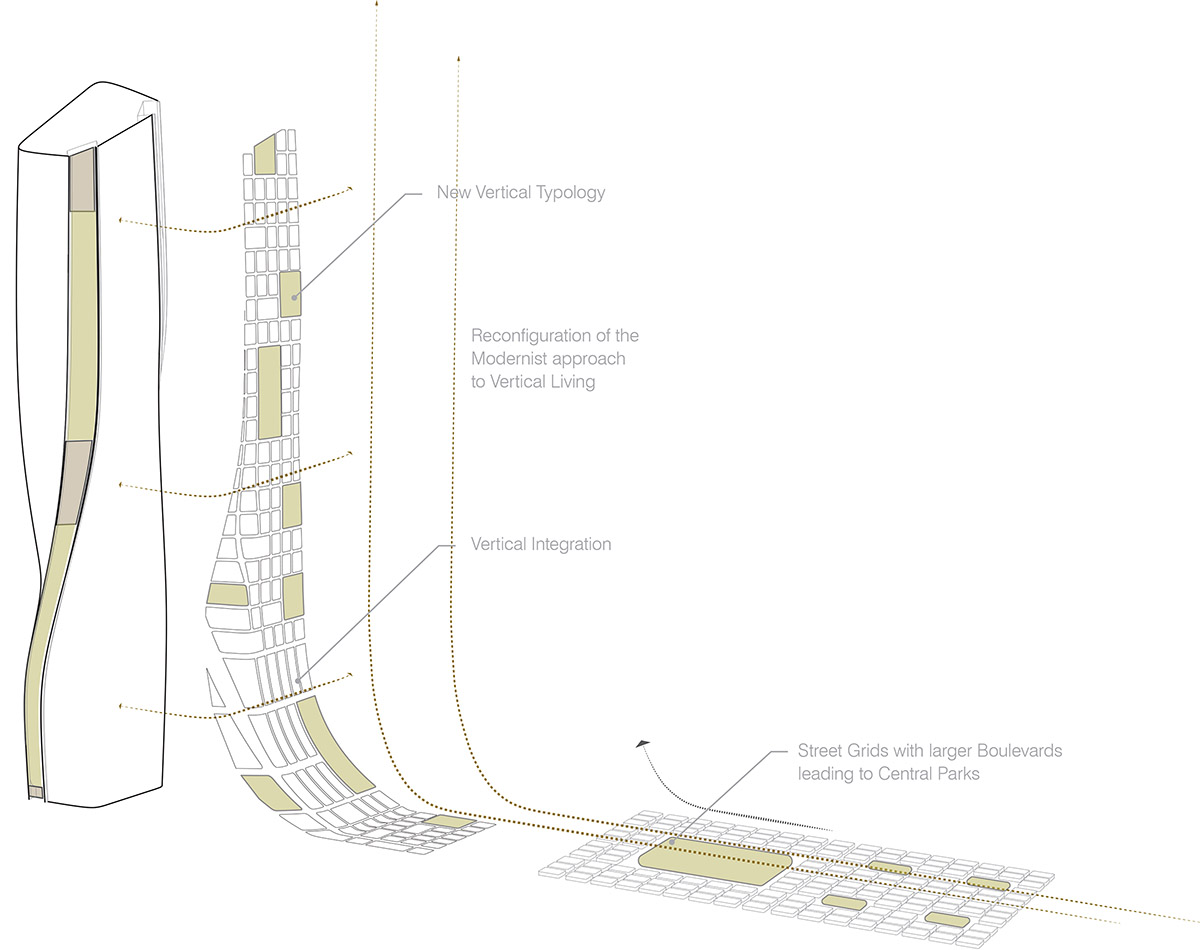 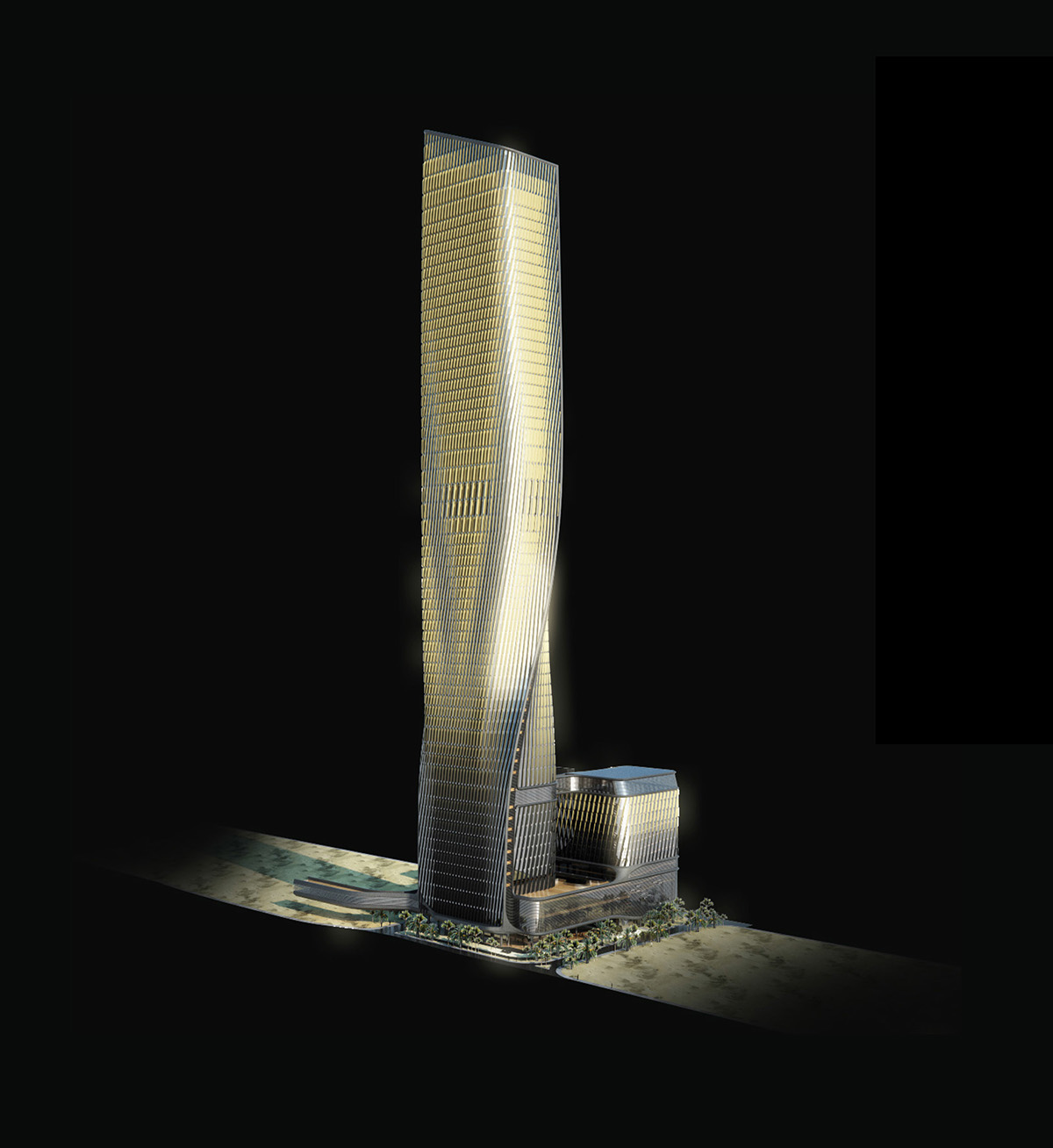 The hotel, as part of the programme of the tower, will be operated by Mandarin Oriental Hotel Group, one of the world’s top hospitality brands, will establish its [email protected] hotel, with 250+ luxury 5-star guest rooms.

Construction work is now underway on the Wasl Tower, if everything goes on a plan, the Wasl Tower is scheduled to open to guests and visitors in 2020.

UNStudio recently completed Raffles City complex with twisted towers in Hangzhou, China and the studio also won a competition to transform the former Deutsche Bank site in Frankfurt, Germany. Caroline Bos, co-founder of UNStudio, was one of speakers at this year's reSITE Conference and she presented UNStudio's focus and works on "a network infrastructure".