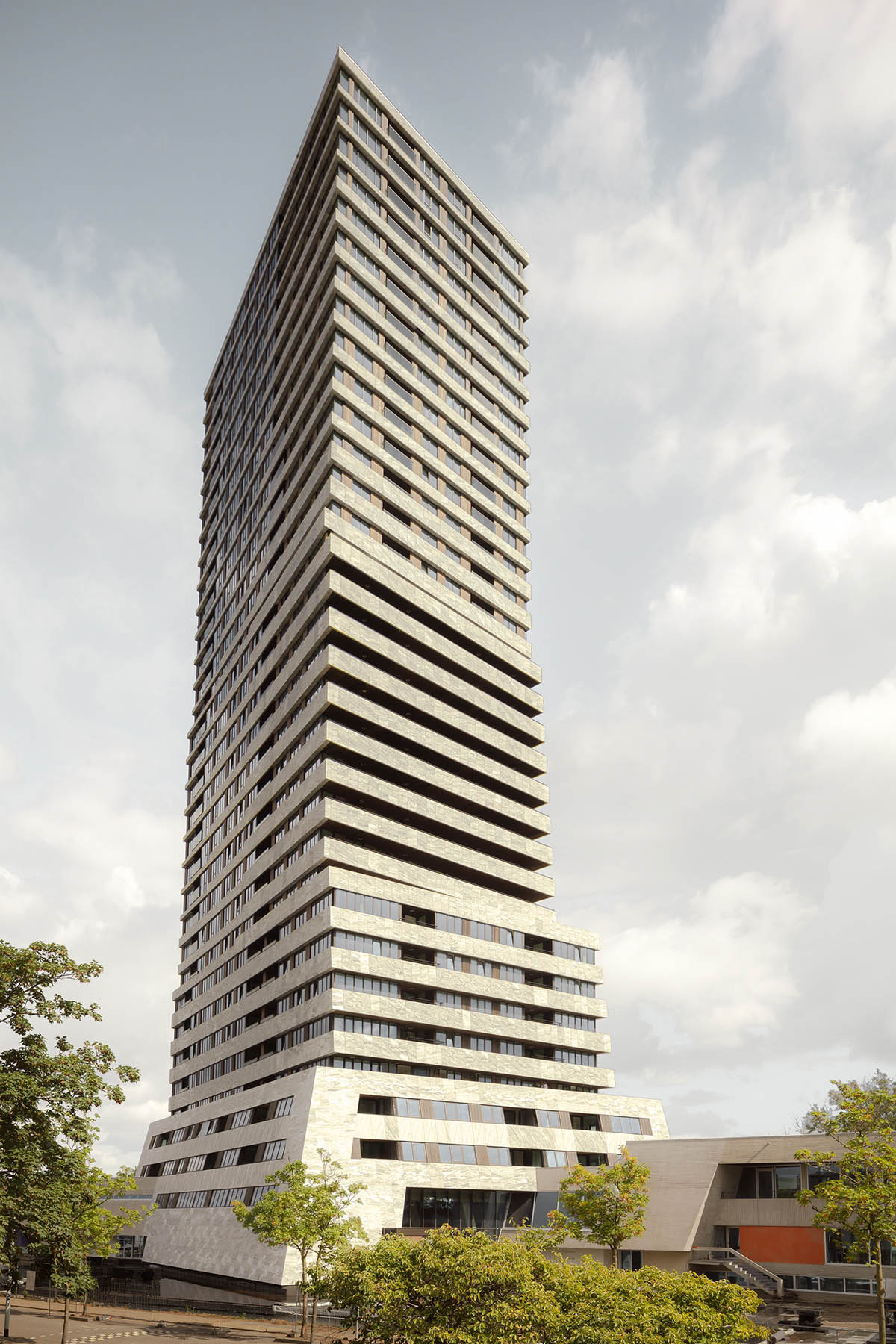 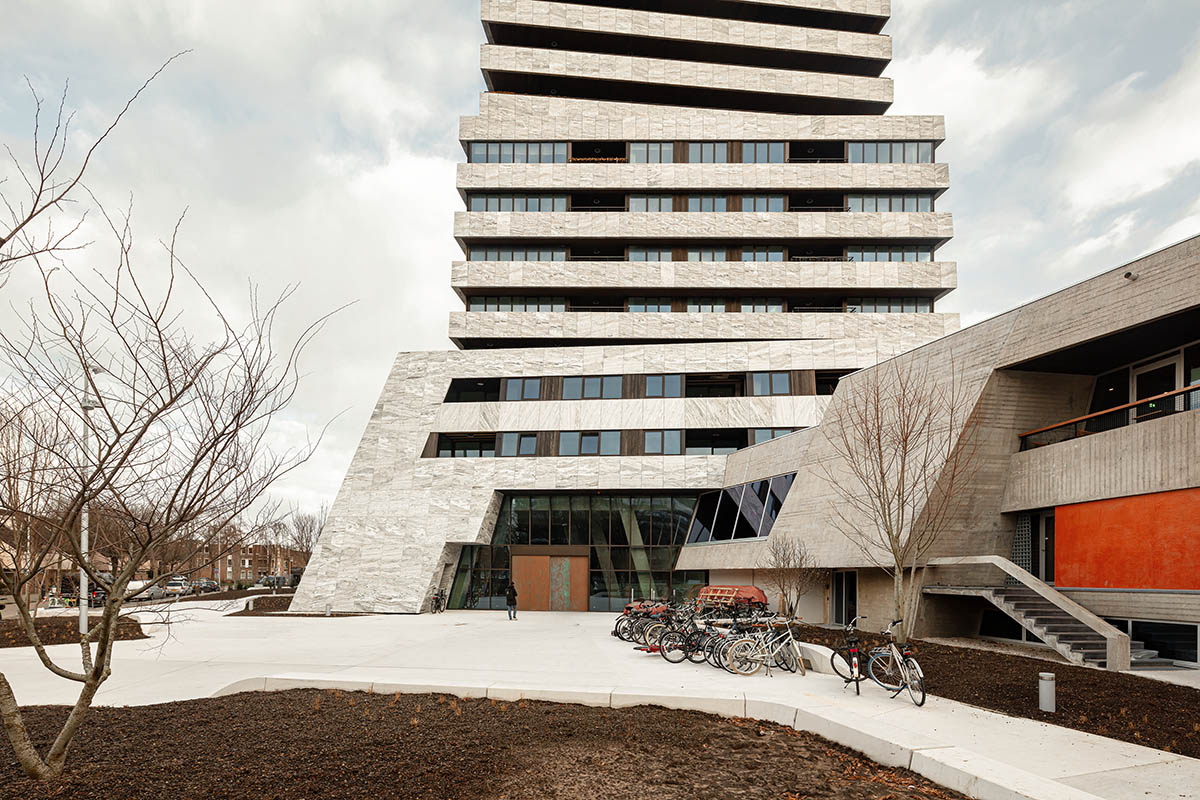 Respecting the historical past of horizontal concrete bunker, Powerhouse Company has added a new 100-meter-high residential tower on the top of the original and much-loved bunker which was designed by Dutch architect Hugh Maaskant in 1969. 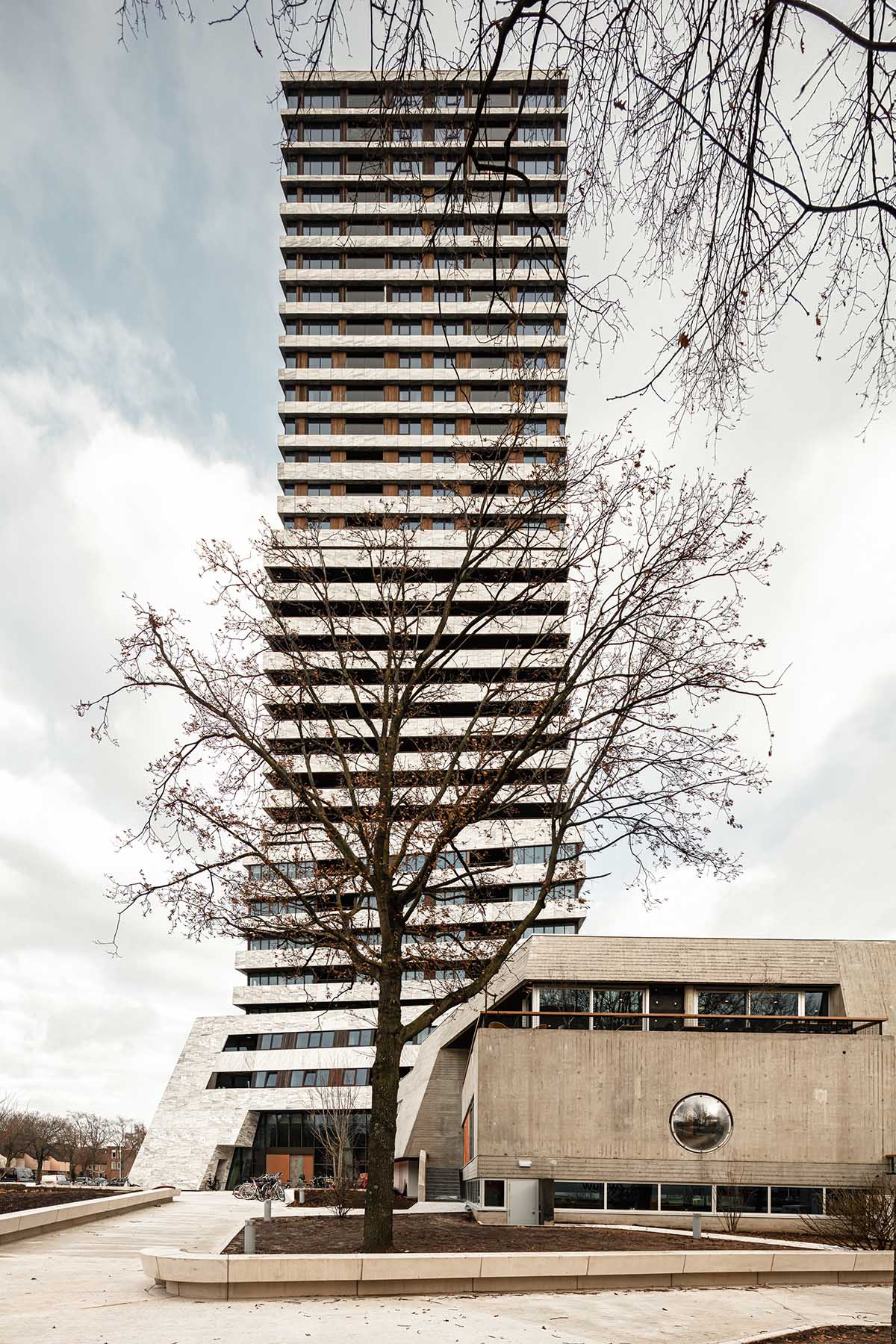 The original, monolithic structure served as the student union of the Technical University of Eindhoven. However, in recent years, it had fallen into disrepair, and only narrowly escaped demolition.

In 2016, Powerhouse Company won a competition initiated by the University of Eindhoven to revitalize the bunker building. 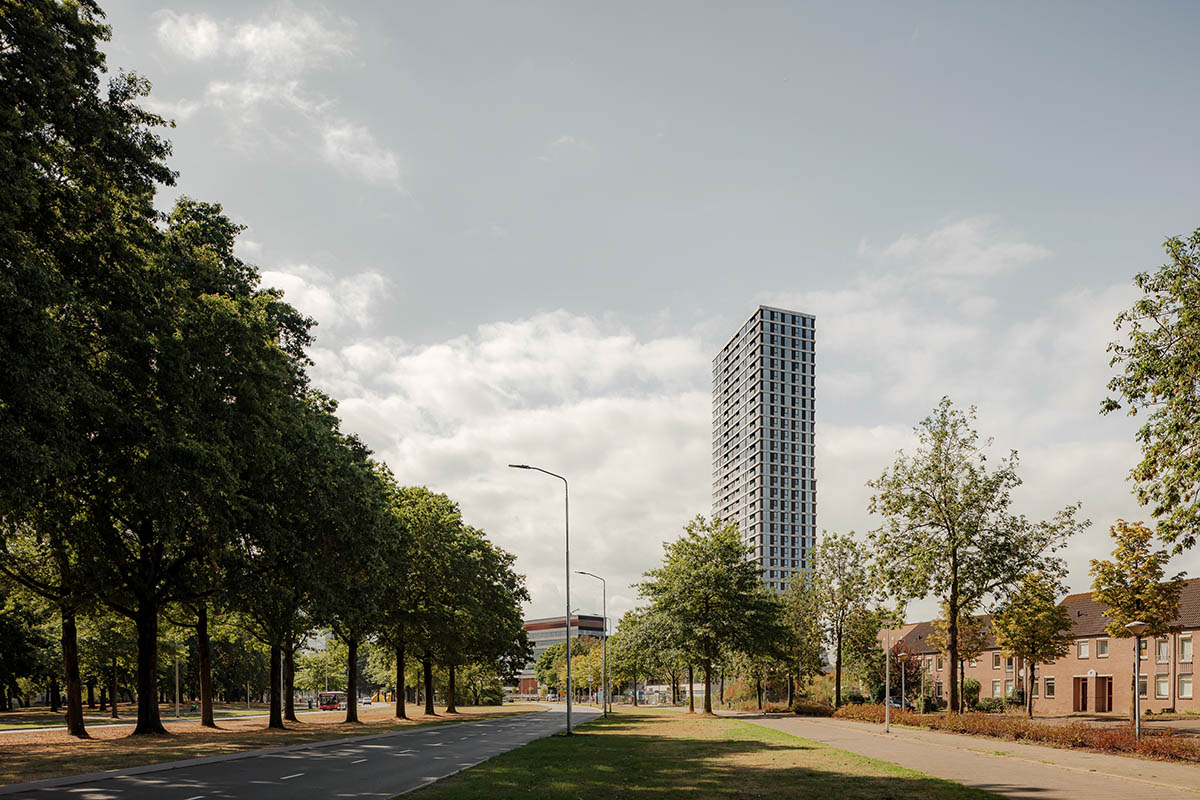 Besides the restoration of the bunker building, the studio has added a residential tower, which allowed underground parking and enabled the transformation of the existing parking lot into a public park surrounding the complex. 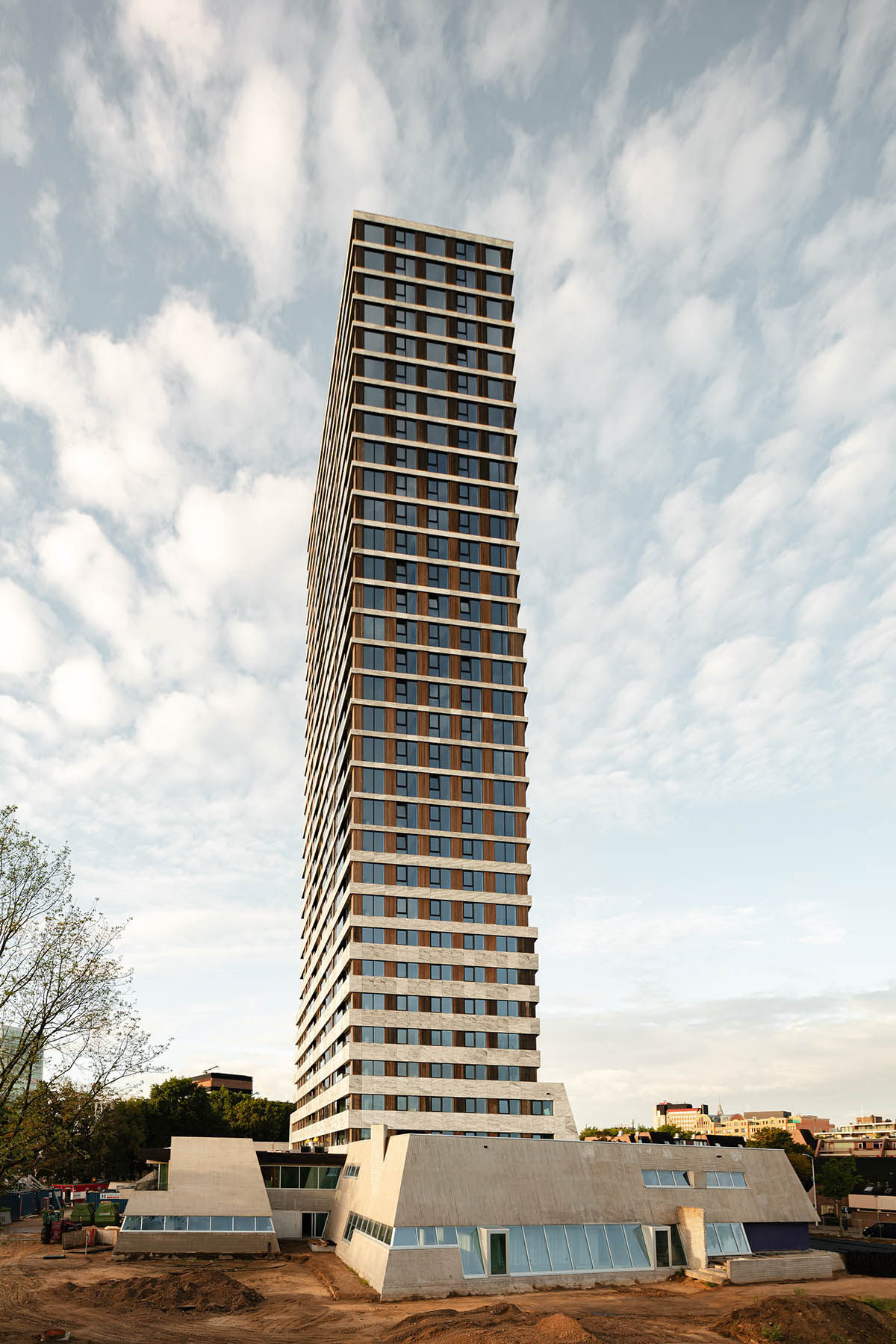 "Driving down the Kennedylaan, you can see the Bunker Tower from the distance; get closer, and you see Maaskant’s Bunker. Our design blends different scales, old and new. It’s a monumental yet sensitive intervention – like a friendly giant," said Nanne de Ru, co-founder of Powerhouse Company. 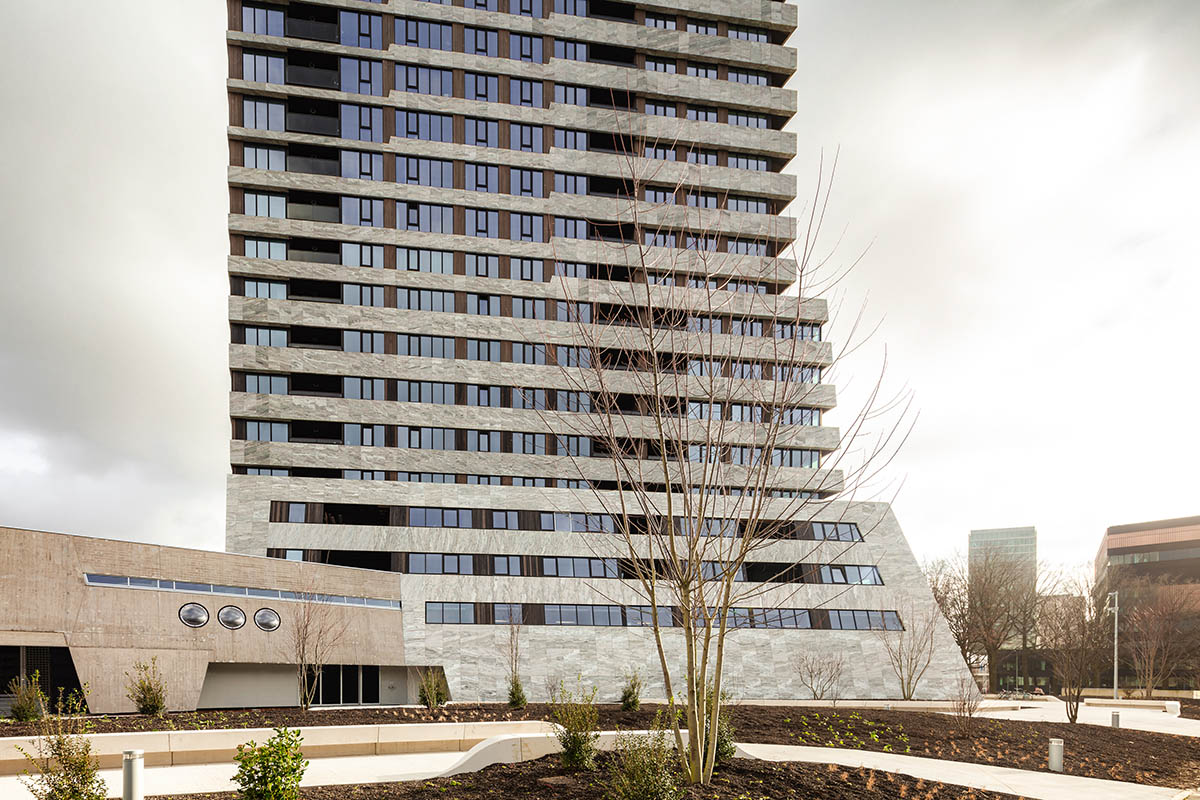 Together with developers RED Company and Being Development, the studio worked with Delva Landscape Architecture & Urbanism to transform the existing parking area into a new public park. 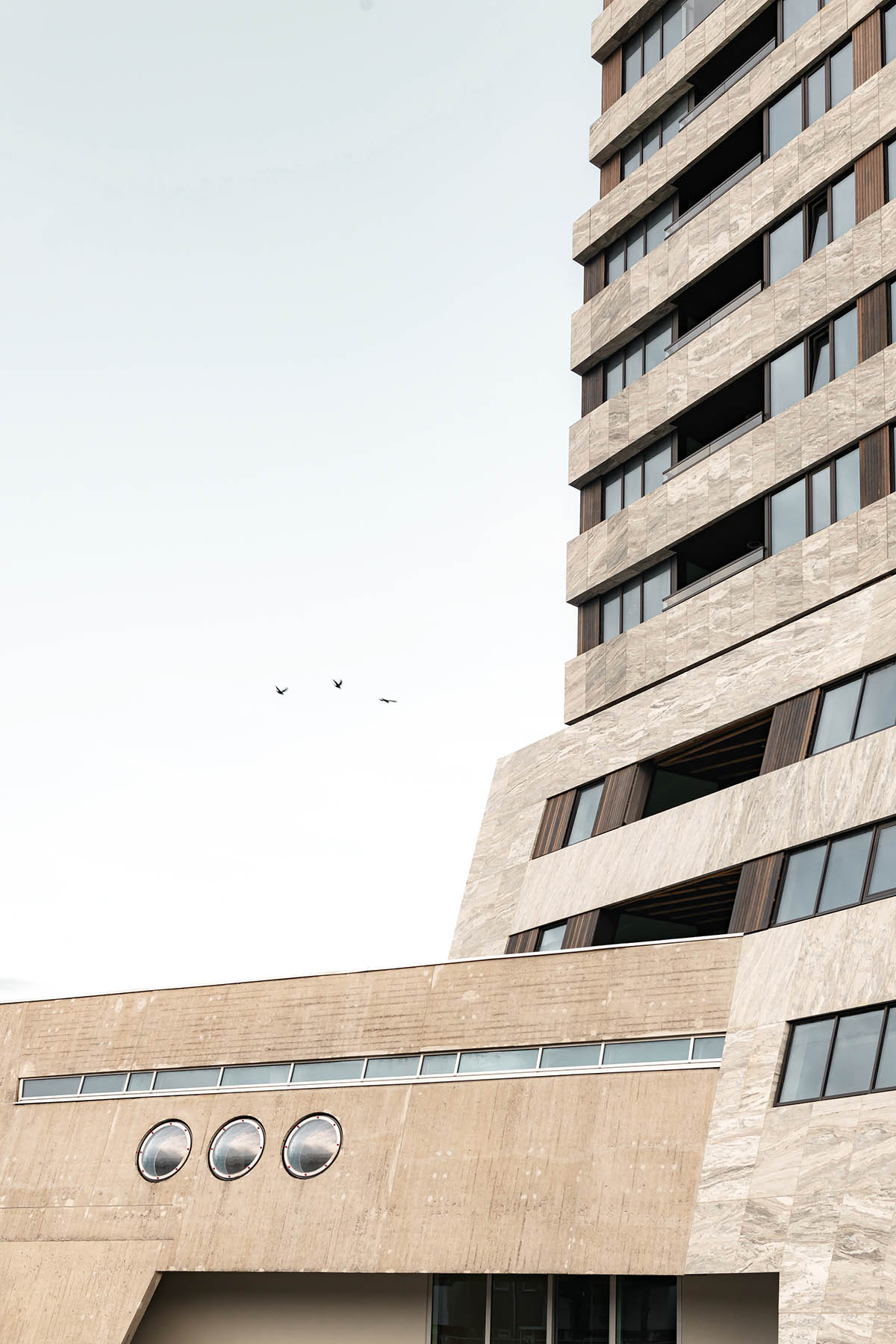 "With the Bunker Tower and the accompanying park, we show that it possible to significantly green an inner- city location and make it climate adaptive, while also responding to the major housing challenges," said Steven Delva, Delva Landscape Architecture & Urbanism.

A new public park, called Bunker Park, becomes a vital element in the design, reinforcing the three green axes that characterize the city of Eindhoven. 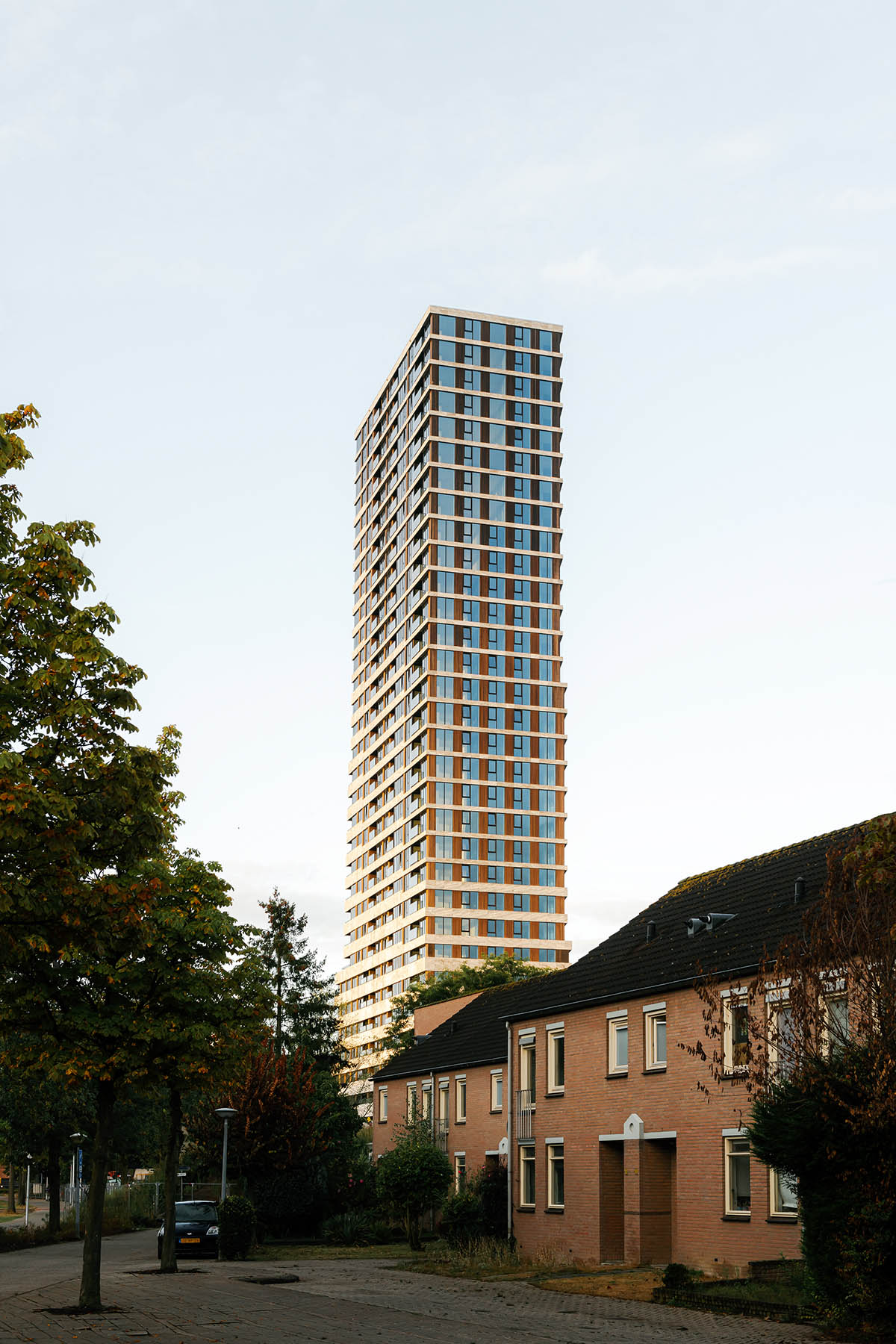 Delva transformed the existing, paved parking lot into a generous and publicly accessible park, boosting the quality of life for residents and the local community.

The visual language of the Bunker Tower continues seamlessly into the park, as visible in the design of the benches and bicycle parking spaces.

The greenery around and on the building serves as a water buffer while contributing to biodiversity by implementing native plants and rainproofing the tower.

As part of the green wedge between ‘de Karpen’ and the Dommel river, Bunker Park is a showcase for urban challenges like collecting water. 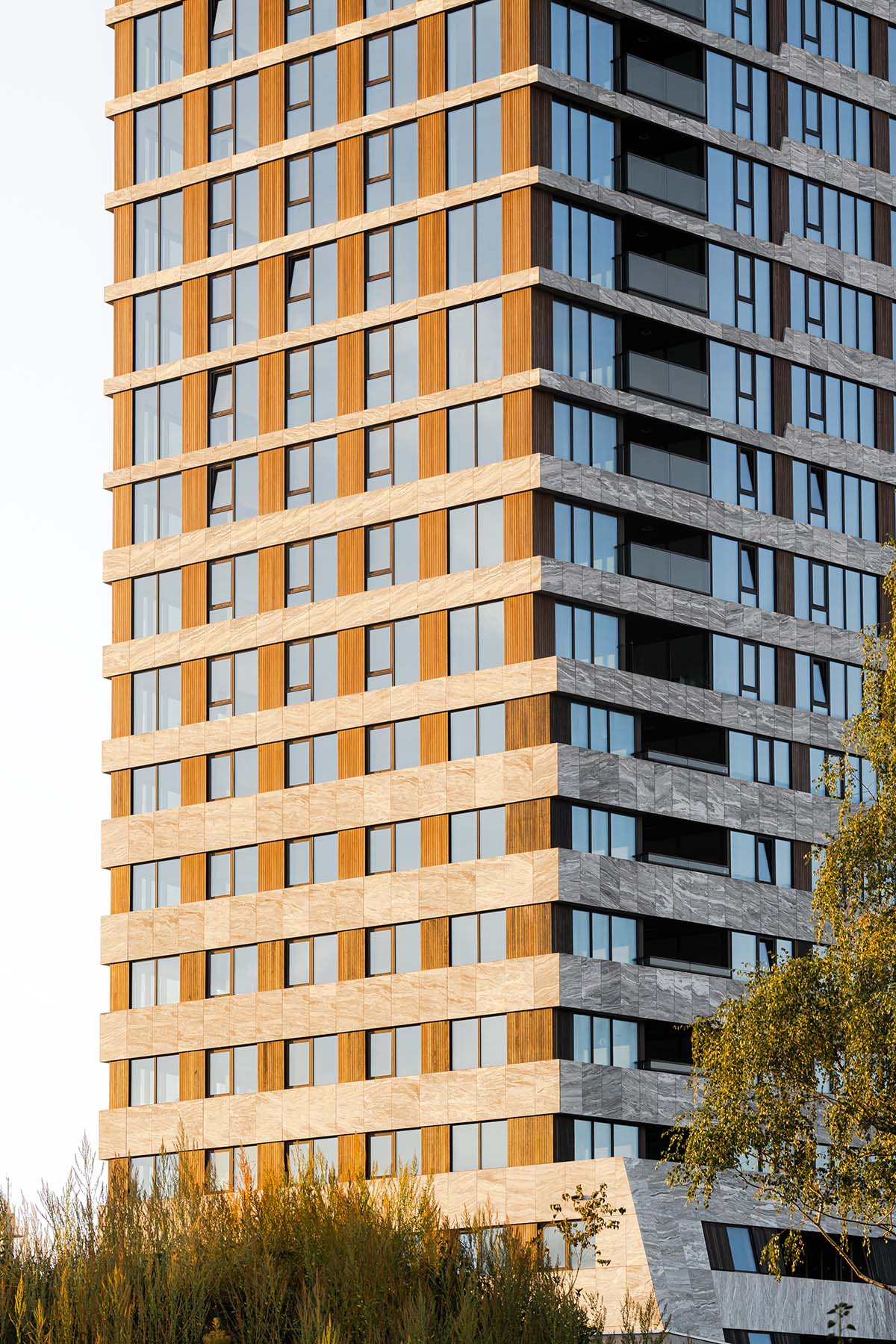 Handled by Van Wijnen contractors, restoration of the original concrete of the old Bunker took eight months and 20 permutations to arrive at the right shade for the renovation. 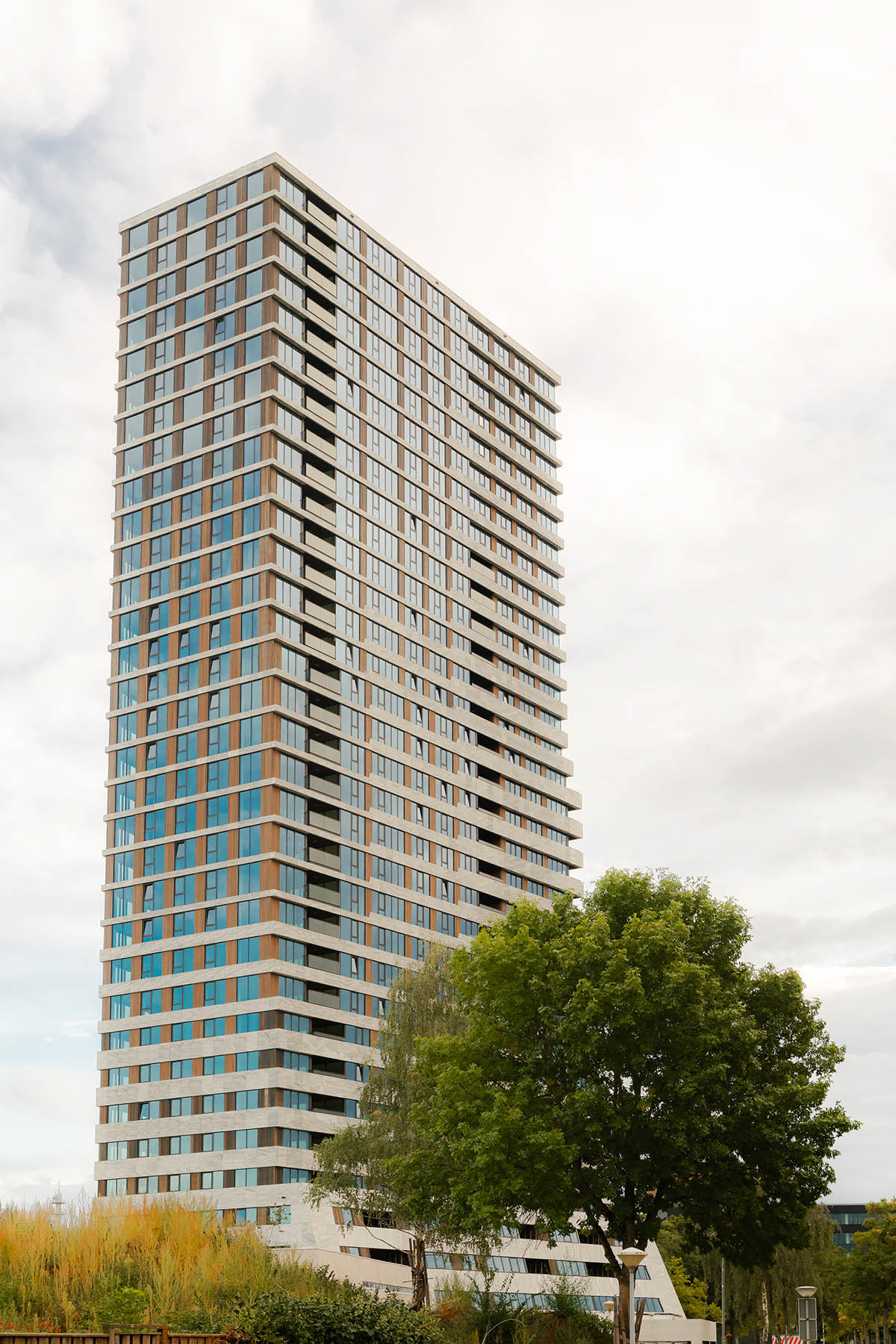 Rather than resorting to traditional solutions of designing ‘around’ monuments – with either a strict separation or a strong contrast between old and new – the studio has made the new tower a bold and imaginative continuation of Maaskant’s architectural style.

The tower tapers as it rises, echoing the Bunker’s sloping walls. Its asymmetrical and stepped form again channels Maaskant’s design and presents varying perspectives from different parts of the city.

The studio divides the tower into three distinct sections, where the tower lifts Maaskant’s design language into new territory. The tower is twisting dynamically and becoming progressively lighter and more open as it rises. 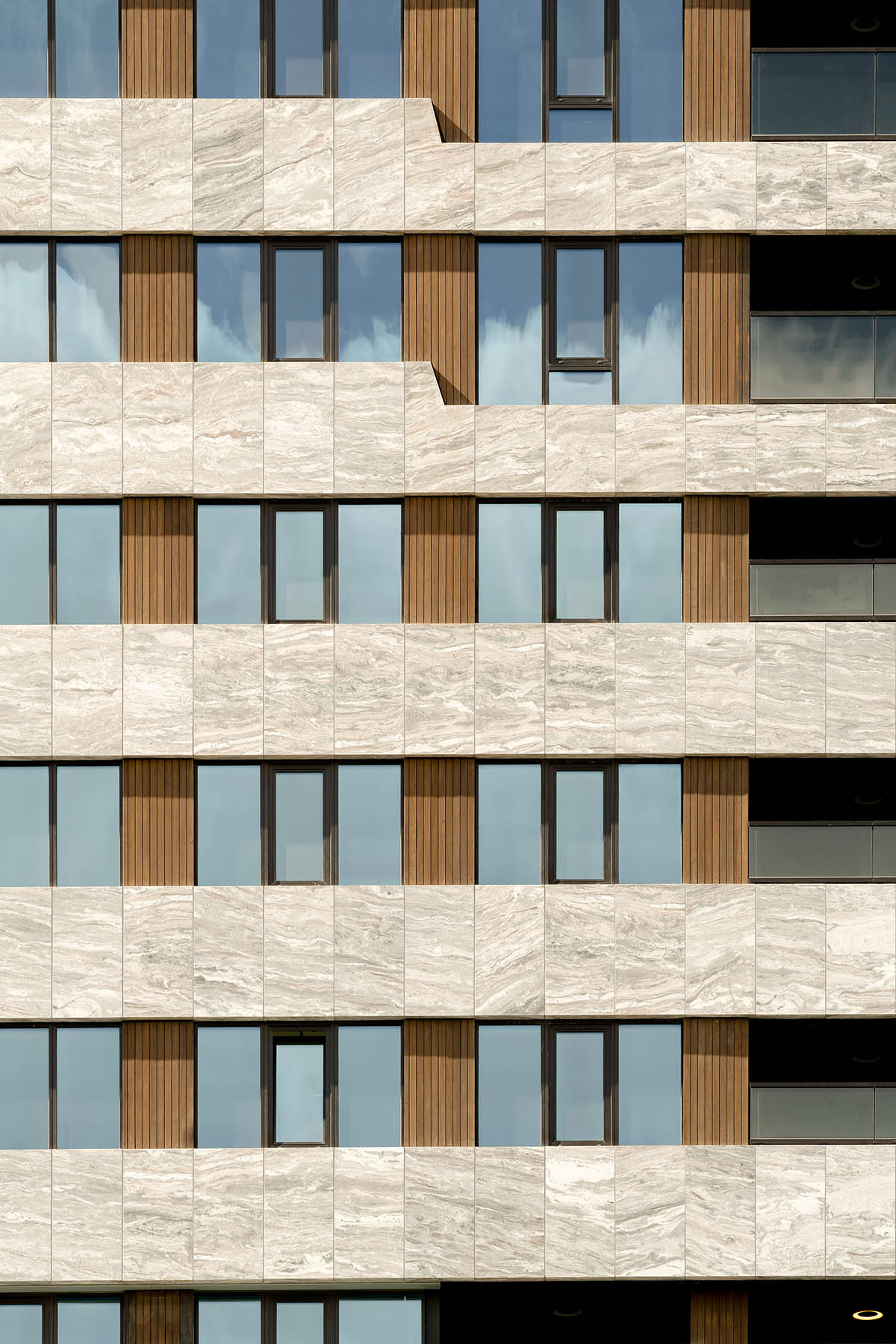 The greater expanses of glass at the top of the tower symbolize the reopening of the previously boarded-up building to the city and provide wonderful views for the new residents.

"The building reveals so many sides, different vignettes, depending on where you are in the city. And every apartment has different views, despite the repeating floorplan," said Meagan Kerr, Powerhouse Company.

The new façade of Bunker Tower features a special material palette that harmonizes with those used by Maaskant - in which the studio calls it "material magic". 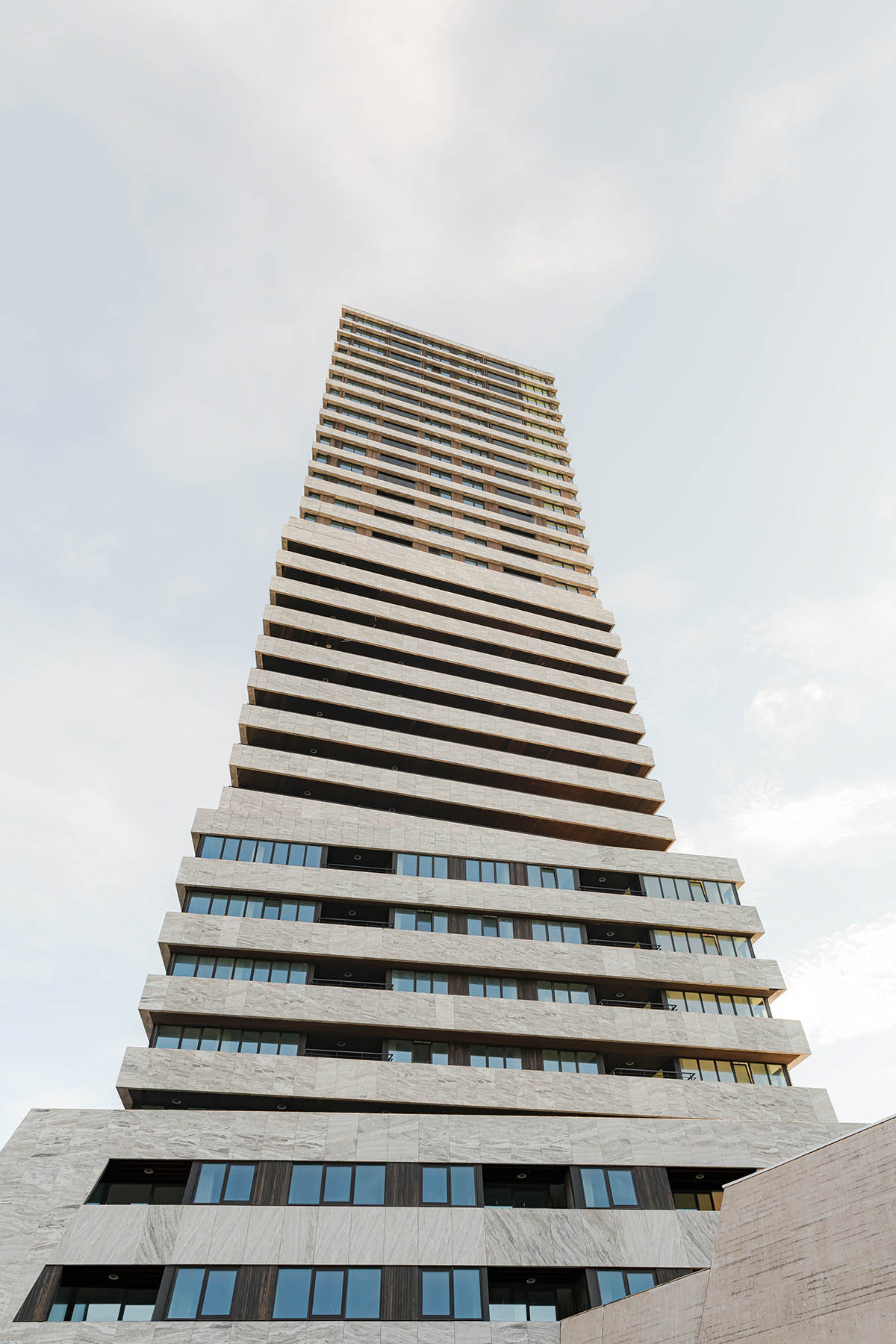 The studio preserves sheer monumentality of the structure by using natural stone, and according to the architects, "this was an obvious choice for the tower façade."

The studio combined natural stone with glass and wood materials that are strongly featured in Maaskant’s design. The three materials are integrated into a lively rhythm of horizontal bands. 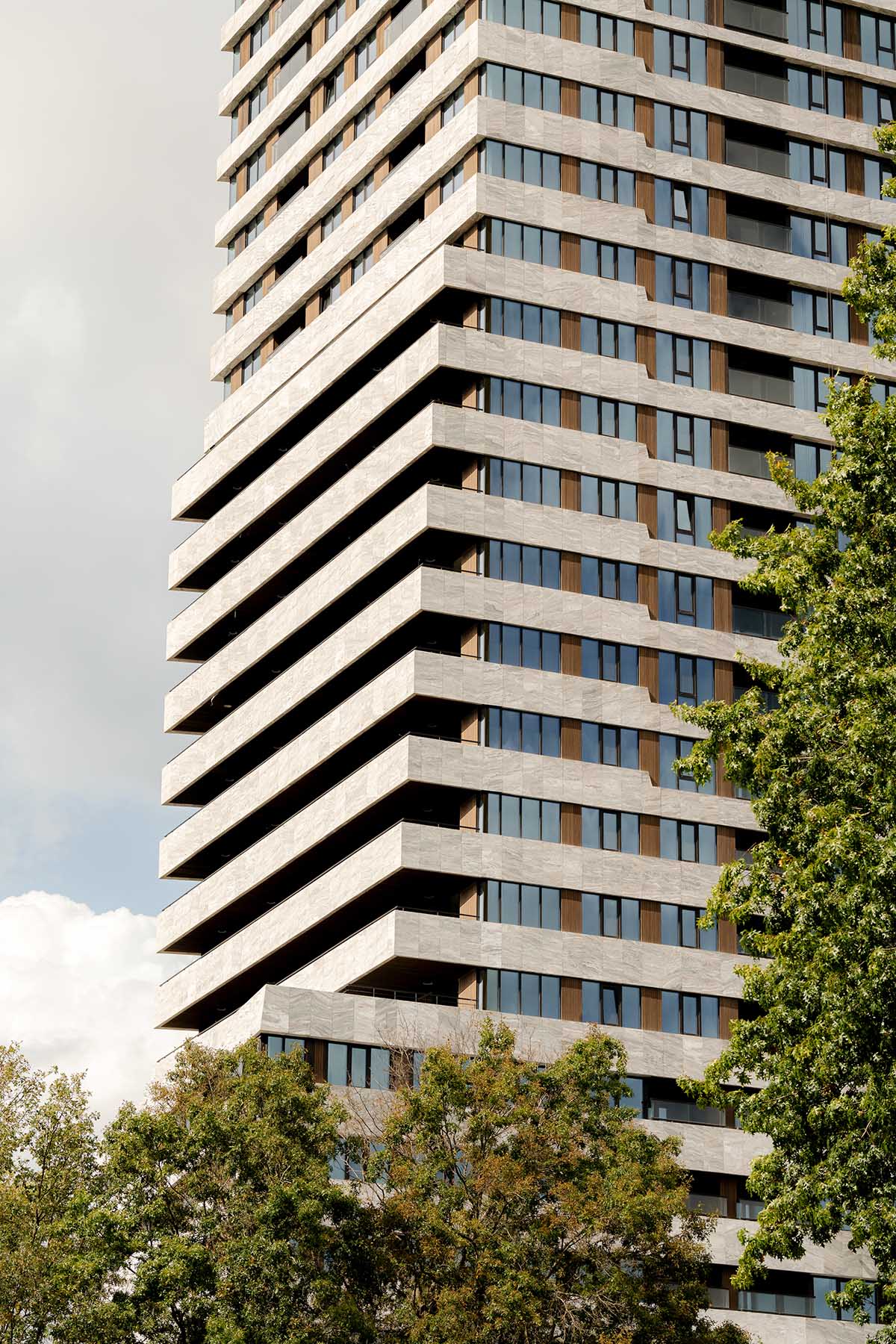 Up to the 18th floor, Delva added greenery into the integrated planters of the balconies, connecting to the Bunker Park. 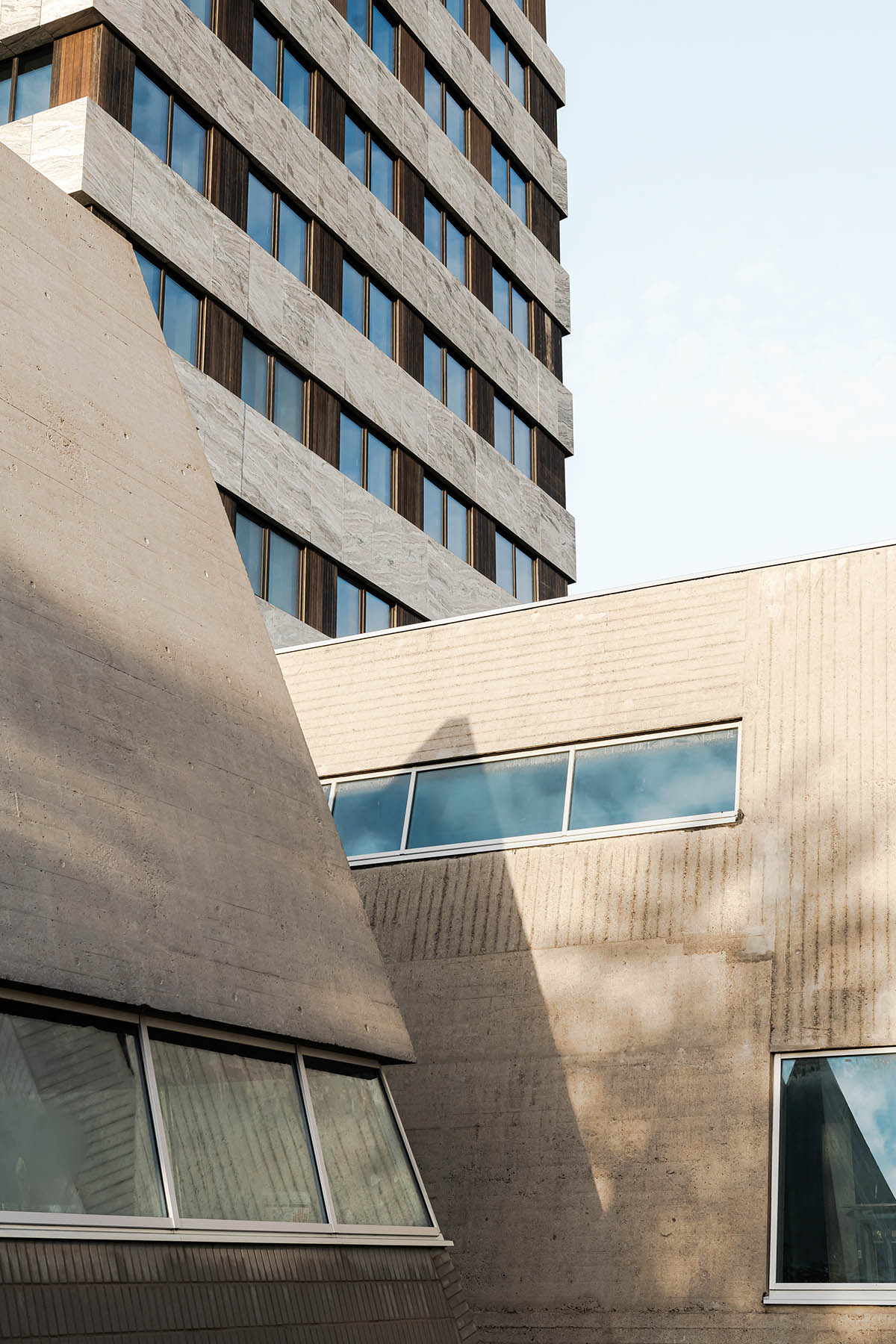 At the base the original bunker, which was now beautifully restored, and will house the high-end 3,000-square-metre office space of Goodhabitz, an online education provider, as well as the partly public Grand Café, which continues one of the old building’s original social functions.

In addition, some of these mixed-material façade panels were hoisted aloft, which were safely done at windspeeds of less than 5 (35 kilometres per hour). 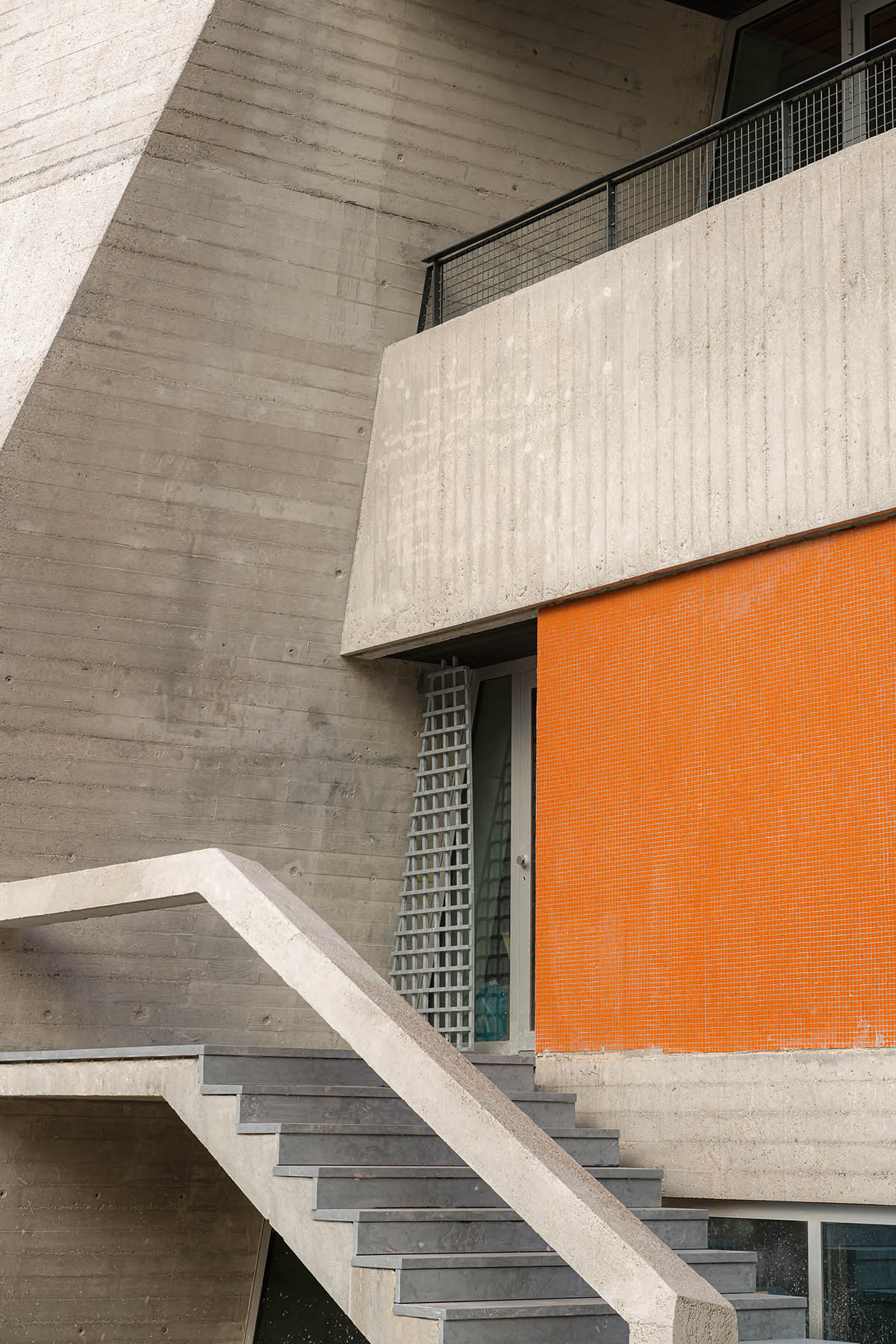 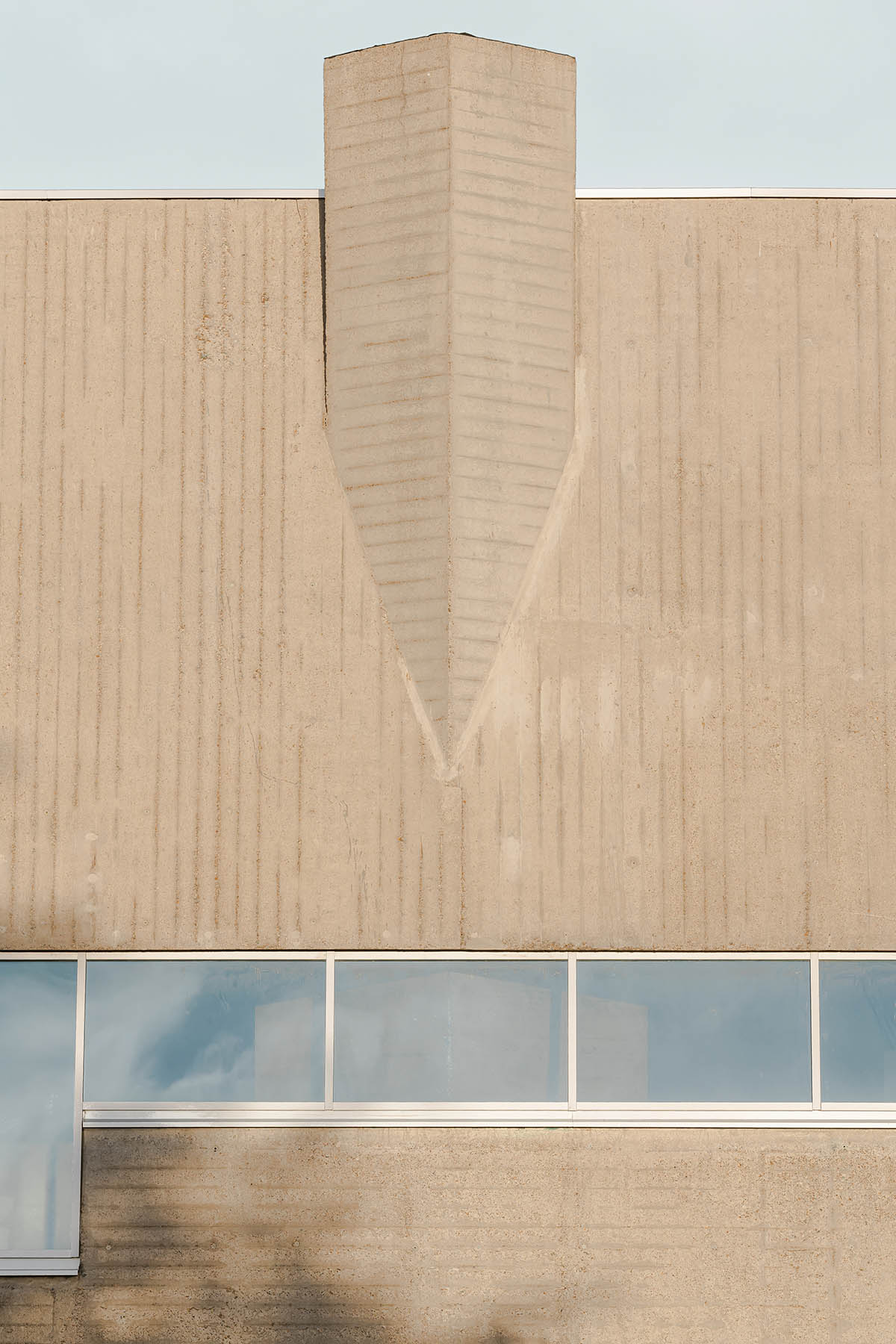 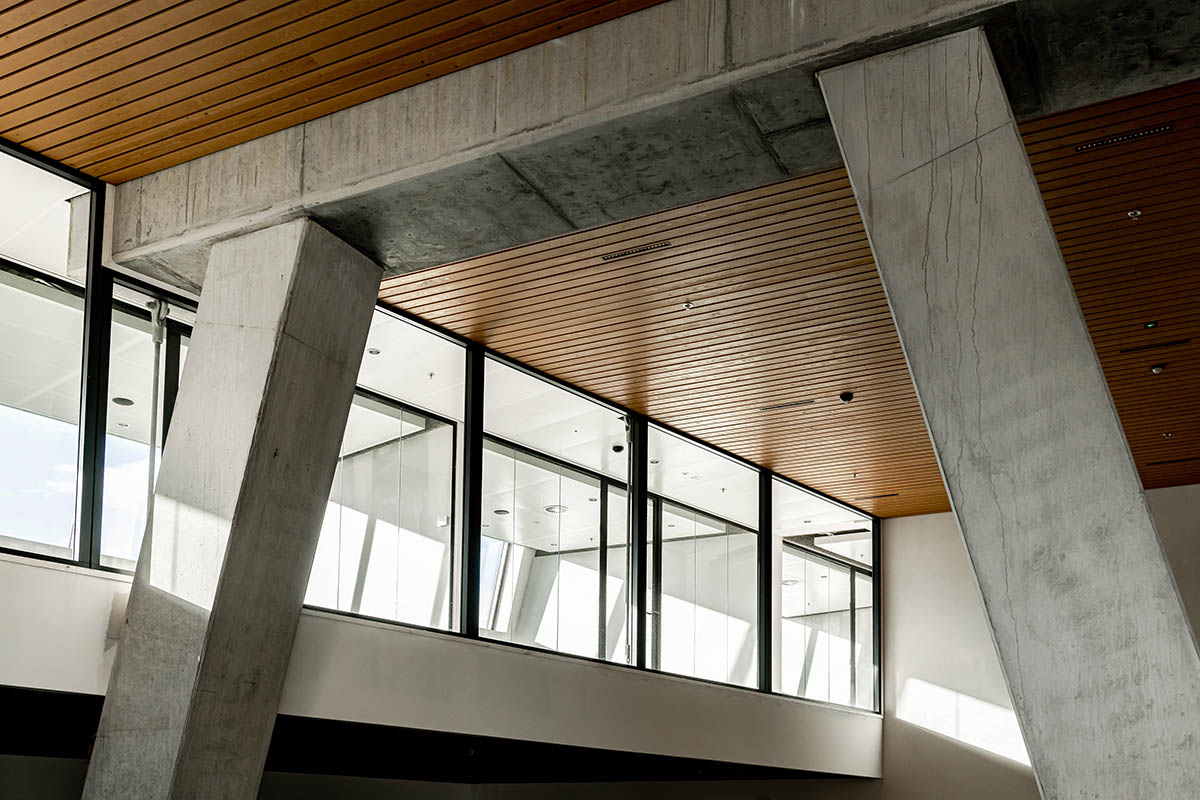 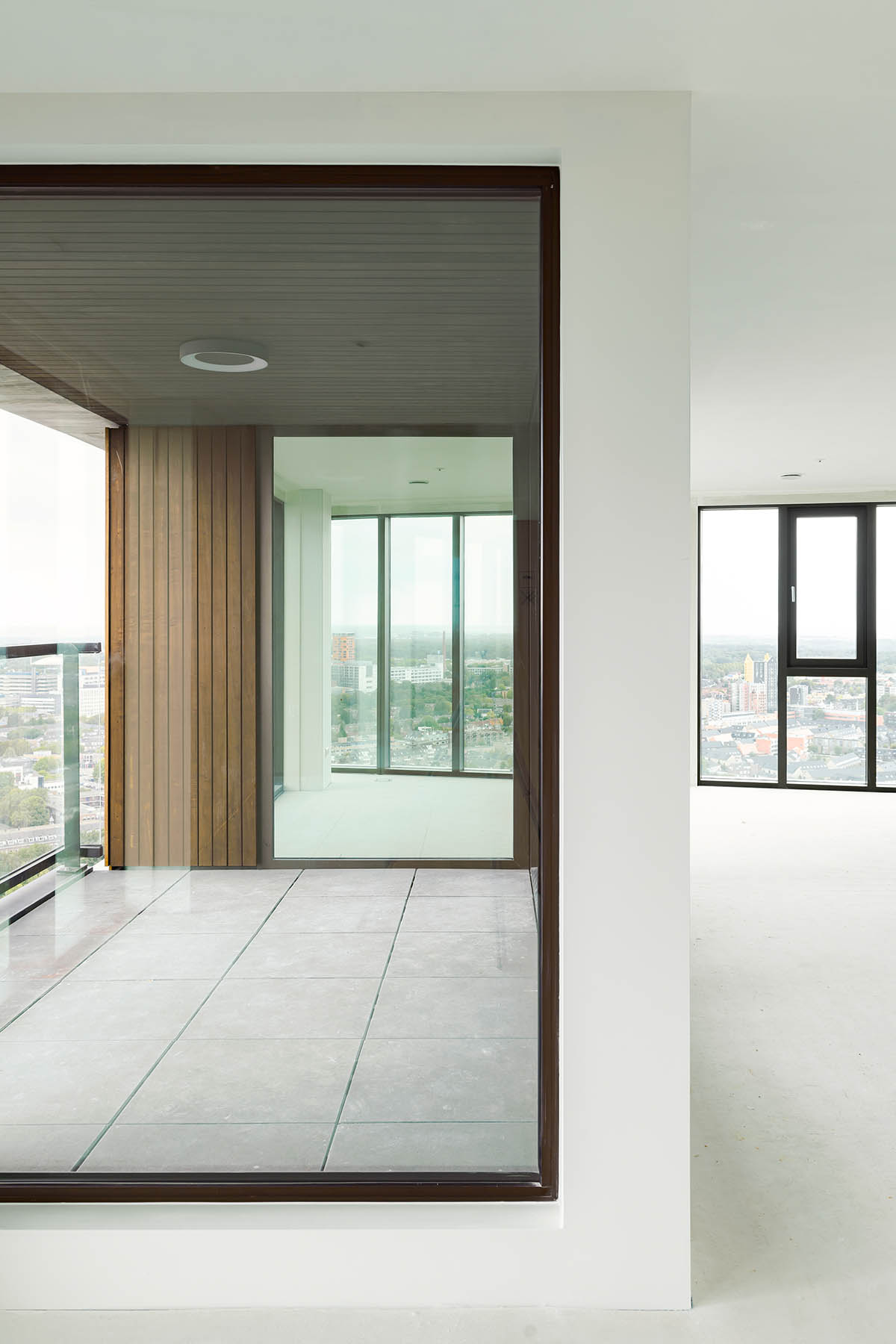 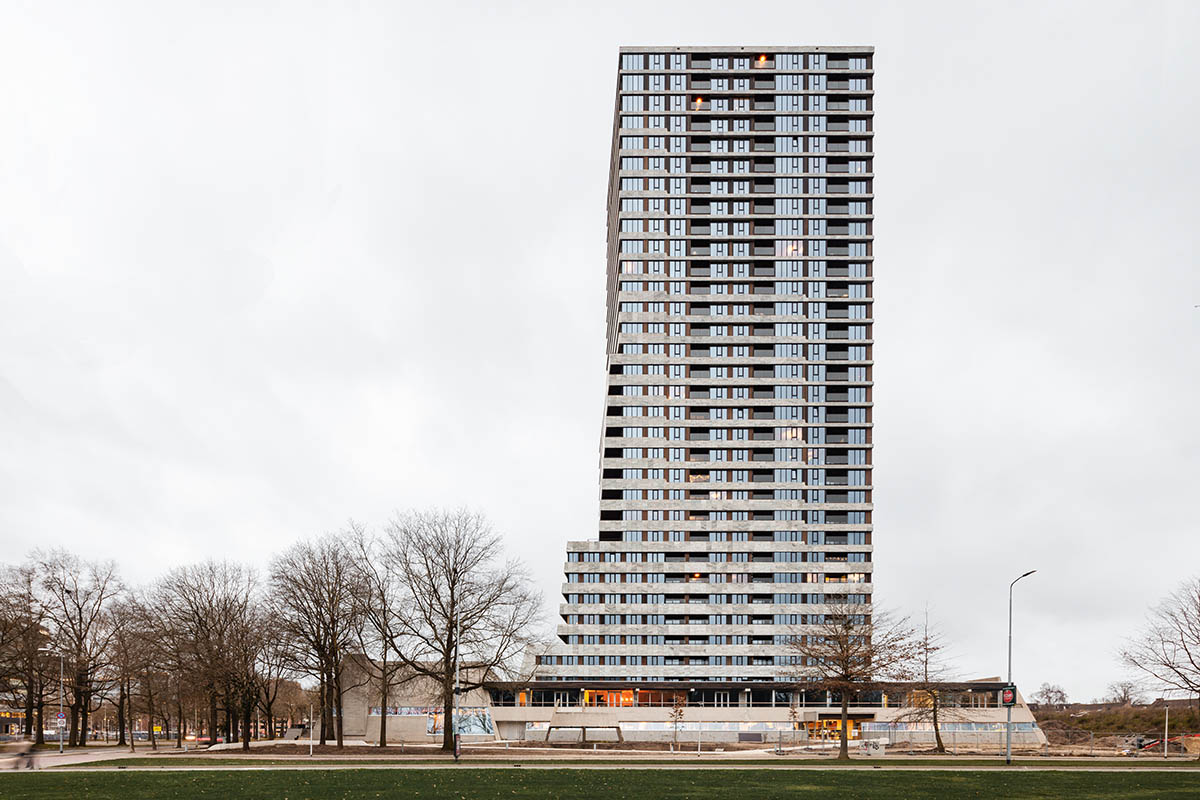 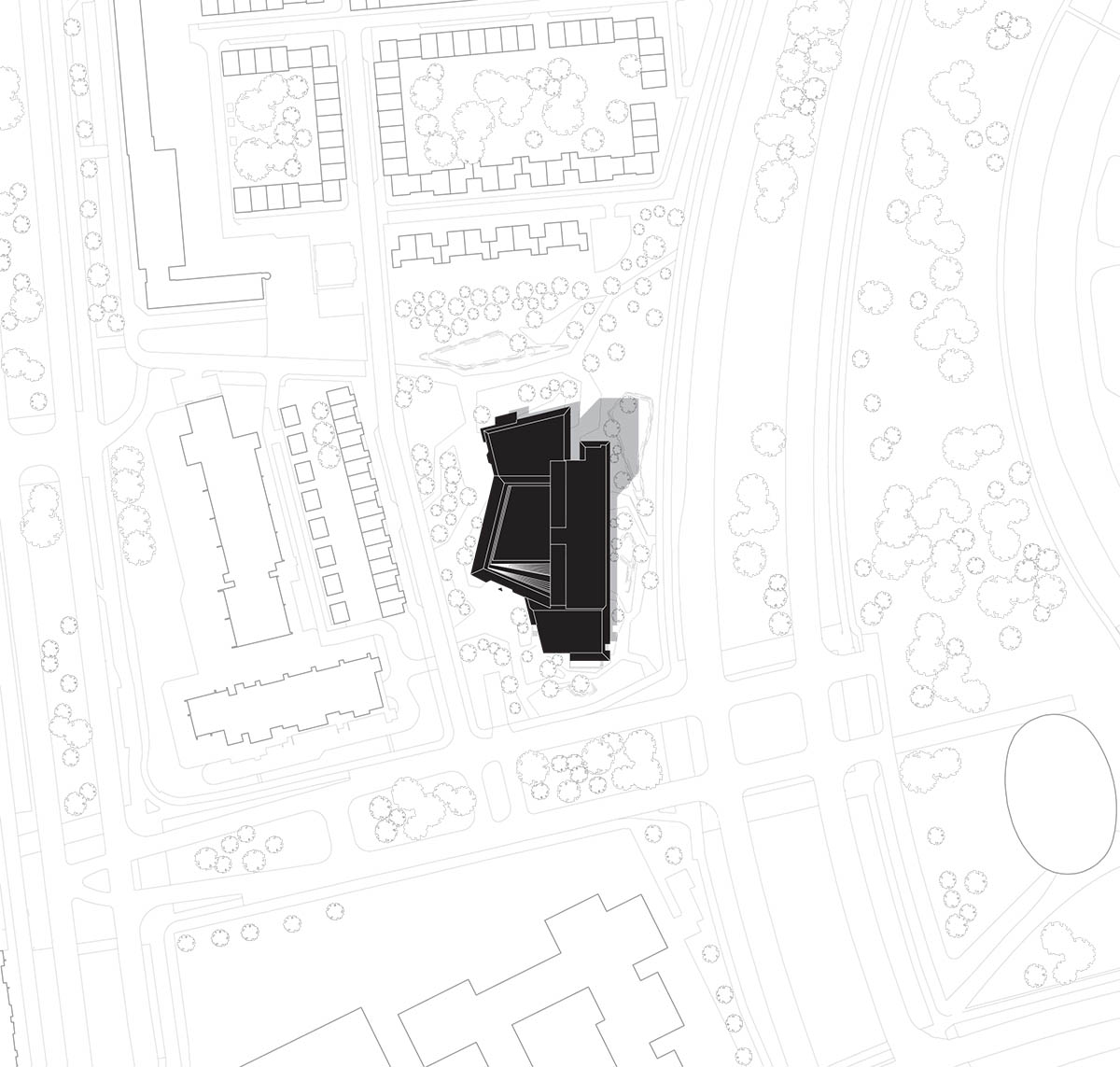 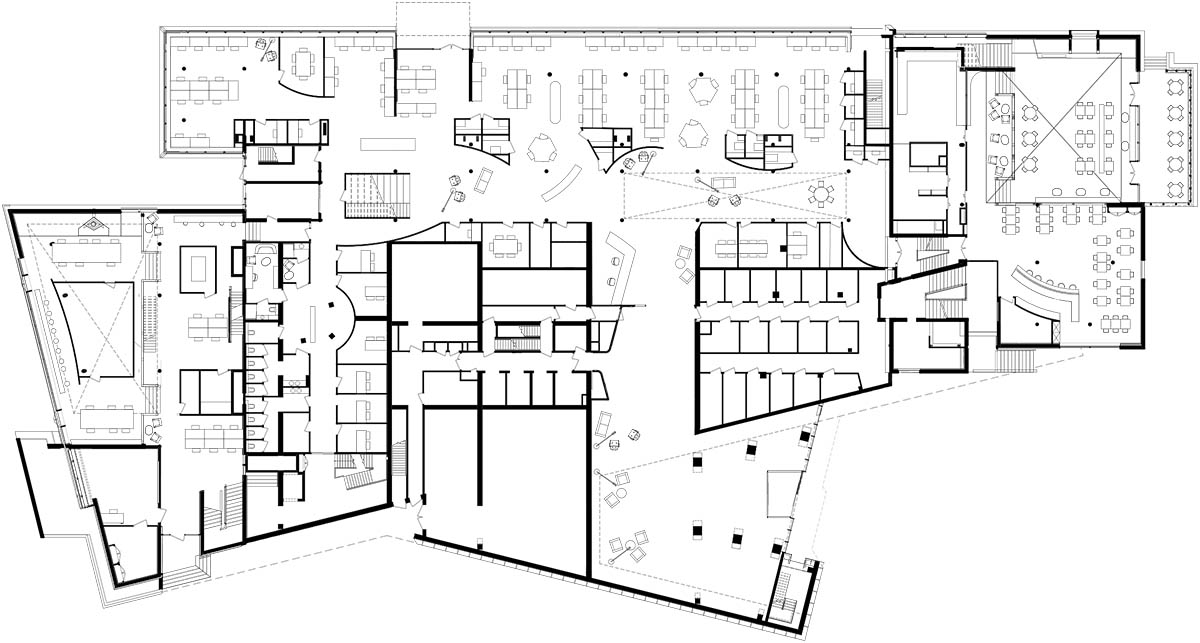 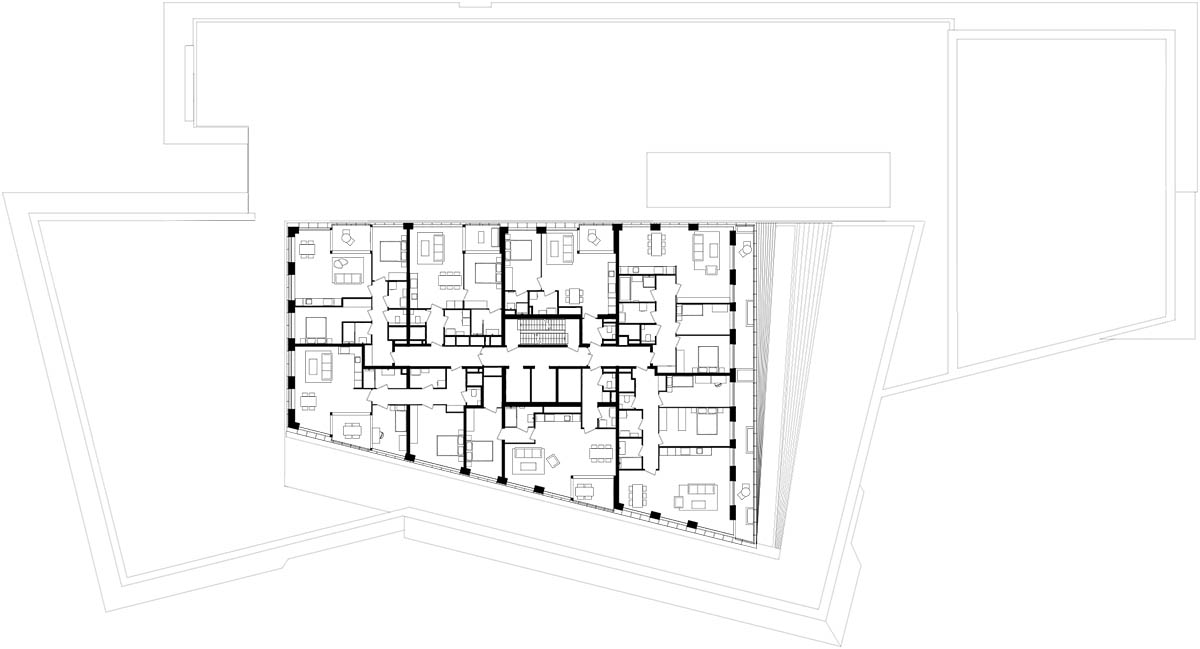 Award-winning architecture office Powerhouse Company is based in Rotterdam, the Netherlands. Founded by Nanne de Ru in 2005, the firm has offices in Rotterdam, Beijing, Oslo and Munich.

Powerhouse Company and Delva Landscape Architecture | Urbanism are designing a new visitor center to a new Dutch national park – right in the heart of The Hague.

Powerhouse Company together with Oslo-based studios Atelier Oslo and Lundhagem will also renew Rotterdam's historical Central Library in the Netherlands.