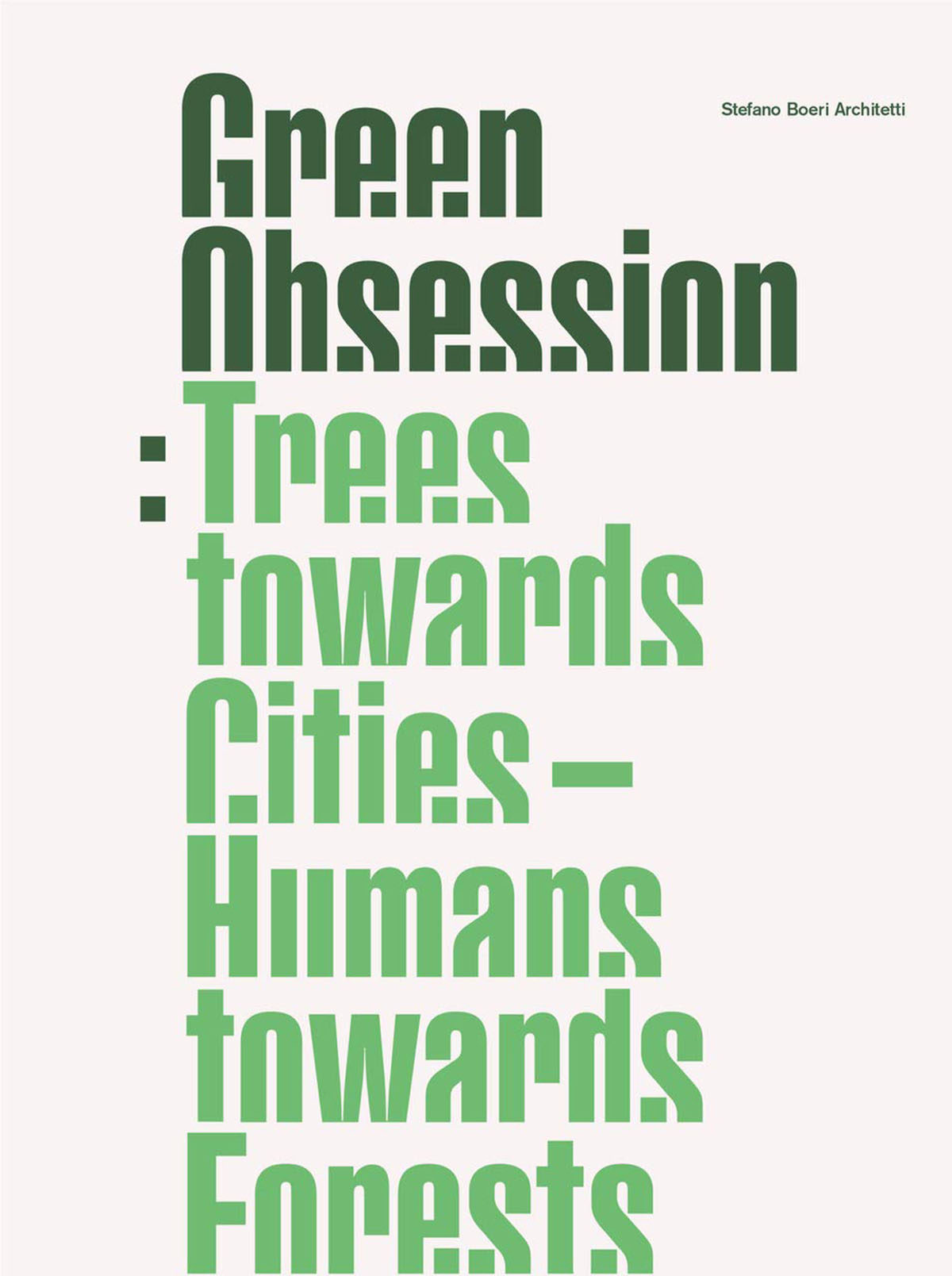 Presented by Stefano Boeri Architetti, which now Stefano Boeri runs the firm with his two partners, Francesca Cesa Bianchi and Marco Giorgio, the 352-page book was published by Actar Publishers and supported by Graham Foundation for Advanced Studies in the Fine Arts.

Green Obsession explores the long path that the practice have followed in the last 20 years focusing on green urbanism and architecture.

The book unveils the processes and the complexity involved in the search for a new kind of urbanism, while drawing attention to some raising questions and re-discussing the relationship between the human species and nature in order to create a portrait of our era.

Boeri's book features a series of essays written by Jane Goodall, Paul Hawken, Mitchell Silver, David Miller, Davi Kopenawa Yanomami. Besides, many other proponents have also contributed to Stefano Boeri Architetti’s perspective on protecting the world and its biodiversity. 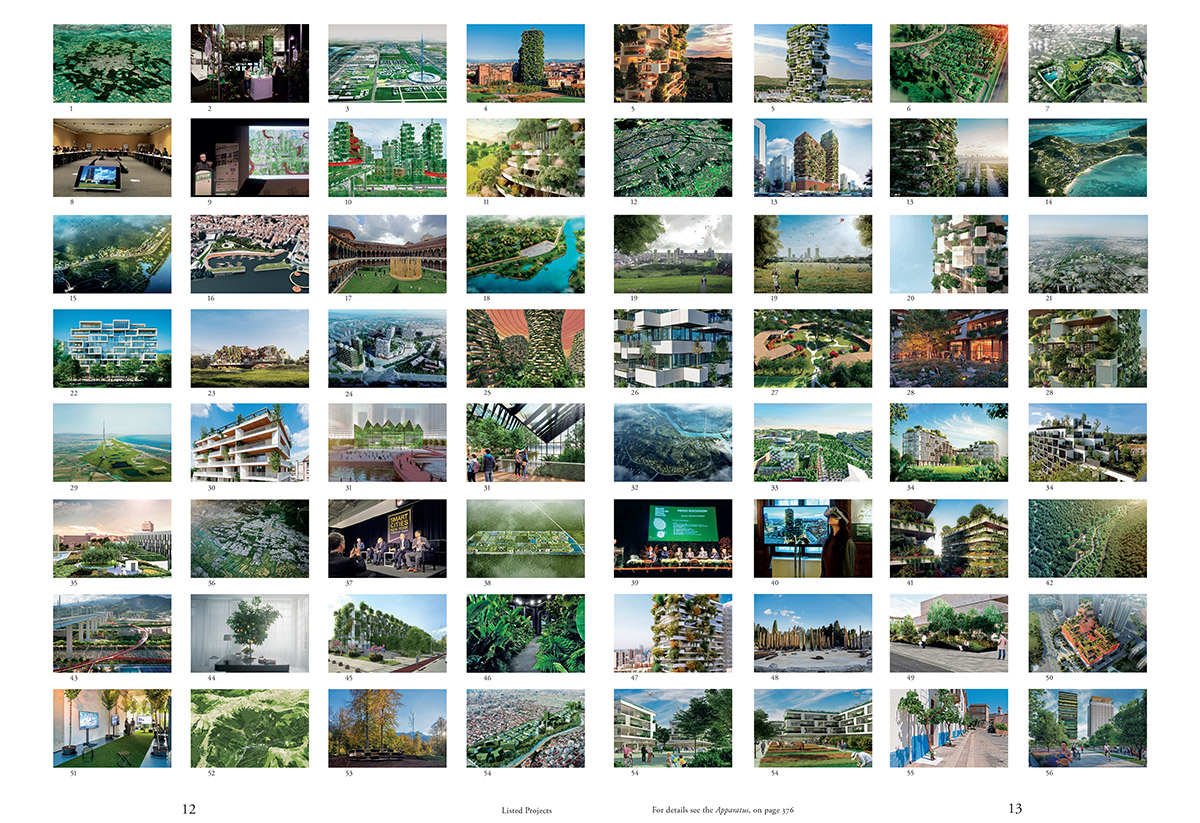 For more than 20 years Stefano Boeri has been engaged in the redefinition of the practice of architecture and urbanism. With his practice he has kept an open dialogue in regards to the human relationship with the City and to what we are used to calling "Nature".

"We have an obsession: that of creating buildings for trees, which can also be inhabited by humans and even birds. We are also obsessed with designing Forest Cities; cities where plants and nature have no less of a presence than humans, and where both create a habitat in which mineral surfaces are reduced to the minimum amount needed for life," said Stefano Boeri.

"We have the obsession of creating large planetary corridors for biodiversity, which would be able to connect parks, natural oases and forests within large territorial systems," Boeri added. 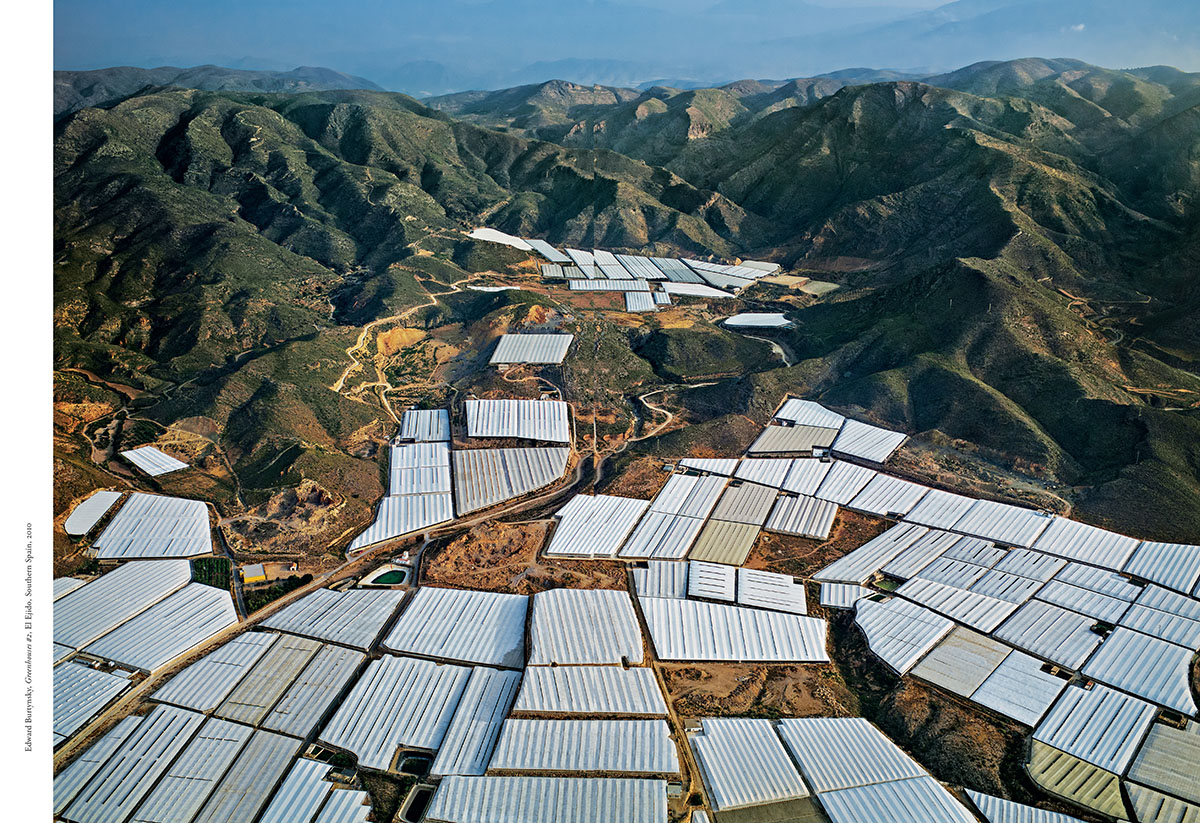 "Our obsession is, rather, the persevering search for a different point of view in architecture"

"Our obsession with greenery is not just a stubborn desire to create greener architectures. It is, rather, the persevering search for a different point of view in architecture. It is the firm belief that biodiversity is not simply a matrix for measuring the density of living species in a place, nor is it just an important resource for strengthening our immune defenses."

"Biodiversity means introducing in our architectural perspective the point of view of the other living species, not just the human one.  It is said that obsessions arise by chance," he added.

"This, however, is not the case. Obsessions arise from other obsessions, self-feeding one from the other," Boeri explained.

Stefano Boeri Architetti stated that This publication aspires to gather together texts and data and to sum up decades of interdisciplinary collaborations between Stefano Boeri and several leading professionals and Institutions, that have been contributing to shape his theoretical thought on nature, architecture and urbanism.

The book follows a discursive thread, alternating dialogues and scientific essays by some of the main protagonists who have contributed to widening the perspective on this subject, helping to raise awareness while protecting the world and its biodiversity. 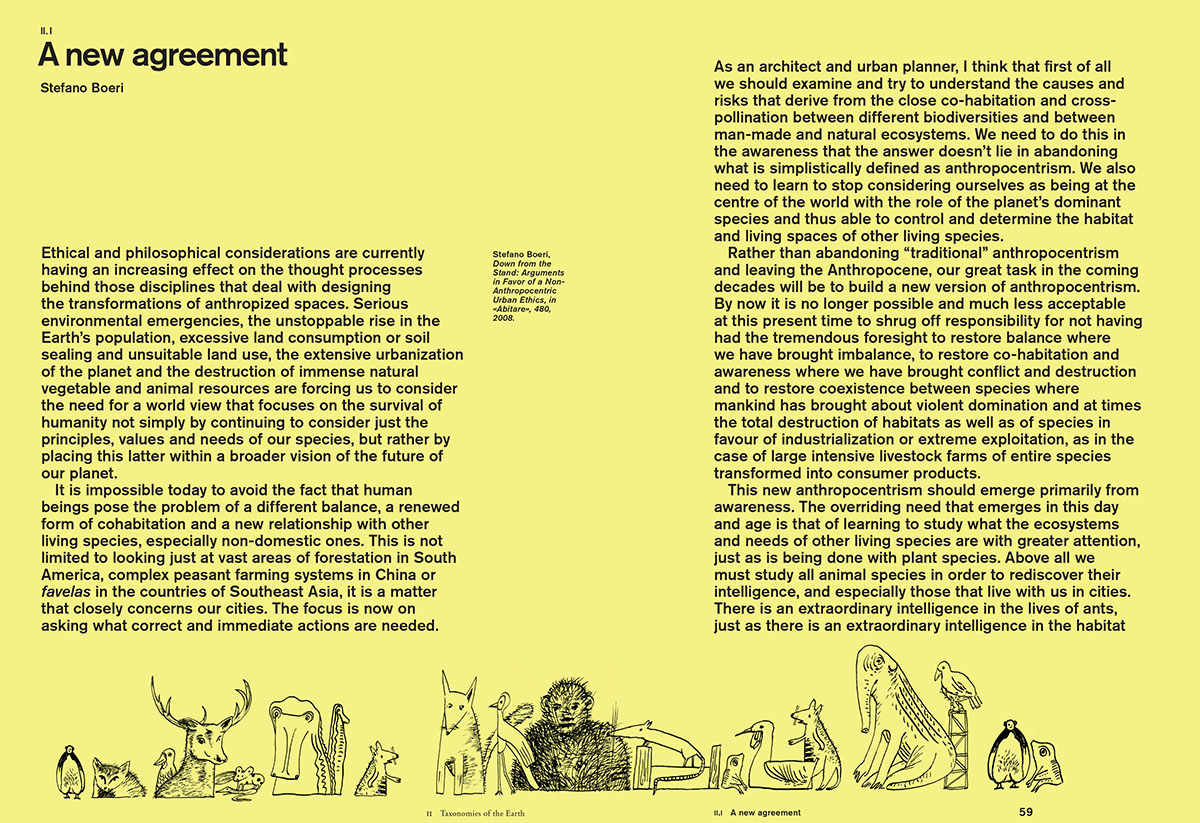 Organized in five chapters, the names of the chapters are: The Environmental and Climate Crisis, Taxonomies of the Earth, The Urban Framework, Trees towards cities, humans towards forests and Kaleidoscopic Futures. 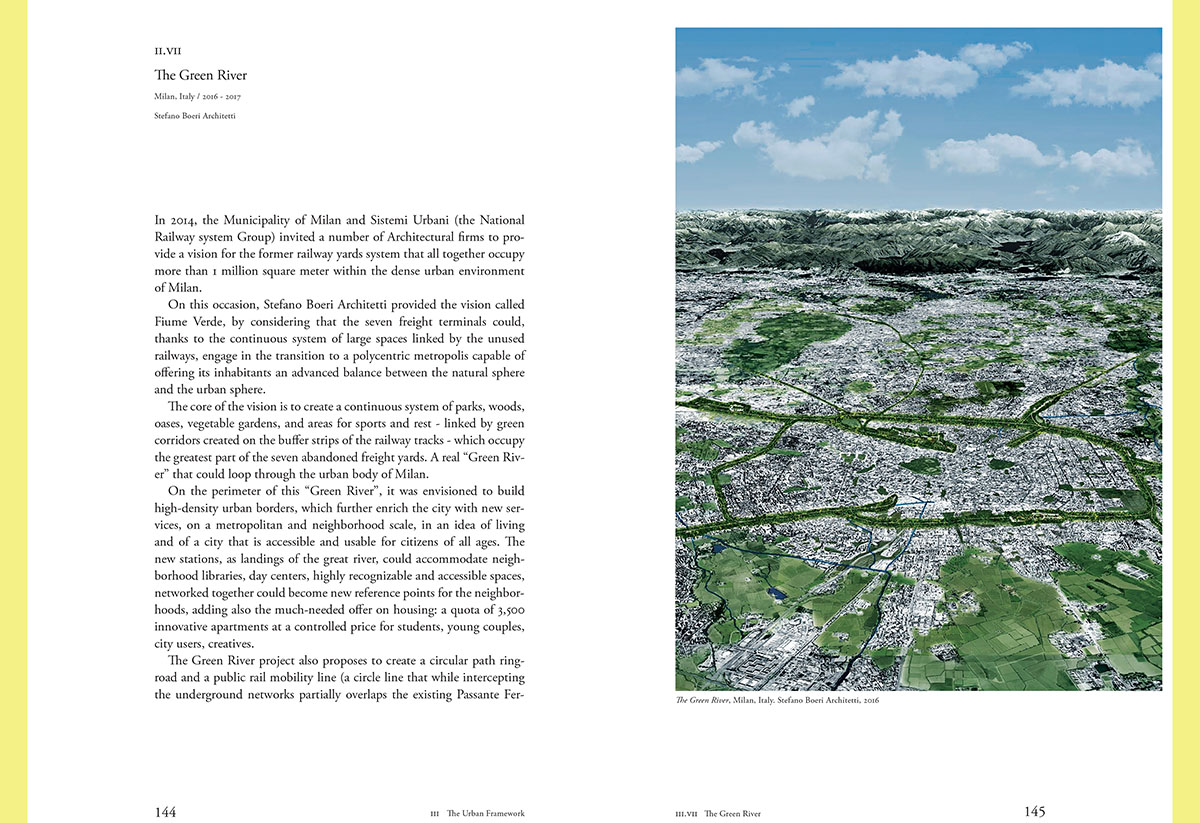 For instance, the first chapter, called The Environmental and Climate Crisis, analyzes the context. It investigates in both poetical and scientific ways the current environmental and climate crisis: the role of communication; how politics, economics, and other sectors are dealing with the issue of climate change; what the research centers and institutions all over the world are facing and from which perspective.

It explores possible paths to be taken, a hard but still necessary paradigm shift – even for architecture – that wants to raise a voice for this much-needed transition, a reawakening of global consciousness in regards to the importance of urban forestry and of nature within our cities, between them, beyond nations and continents.

In a dialogue with Stefano Boeri, Paul Hawken, one of the environmental movement’s leading voices, and a pioneering architect of corporate reform with respect to ecological practices, said: "Today, our choice is to either heal or steal the future. A world where water is cleaner, where there is more nutritious food, more forests, more fish in the oceans, a world where people are healthier and cities are vibrant places because they are not fortresses. They are actually places where nature and people are interactive and relate to each other. All these things are possible." 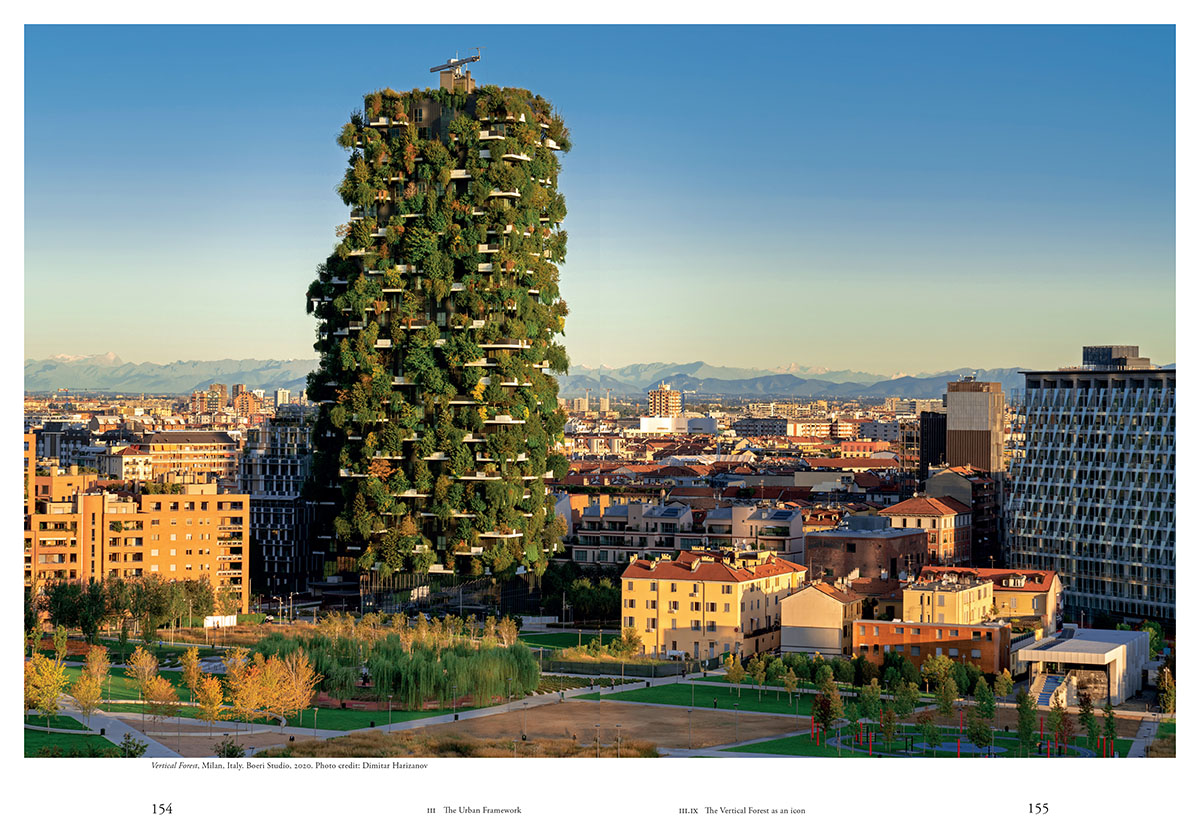 The second chapter, called Taxonomies of the Earth, analyzes the effects of the "Anthropocene age" that are ever more visible, changing the environment and affecting every species that lives within it.

Green Obsession offers a "new agreement" to be taken that aims to give a voice to this much needed ecological transition.

The second chapter also analyses some real projects from global scale vision to Continental and National scales: The World Park as conceived by Richard Weller, architect and professor at Penn University, that came out of a study of areas considered to be biodiversity hotspots, The theory of the famous American biologist Edward Osborne Wilson “The Half-Earth” who proposes to conserve half of the planet’s surface, including seas and land and “Green Urban Oases”, an initiative inspired by another pioneering large-scale initiative namely The Great Green Wall (project to restore Africa’s degraded landscapes) that would use forests, trees and green spaces to improve the ecological continuity. 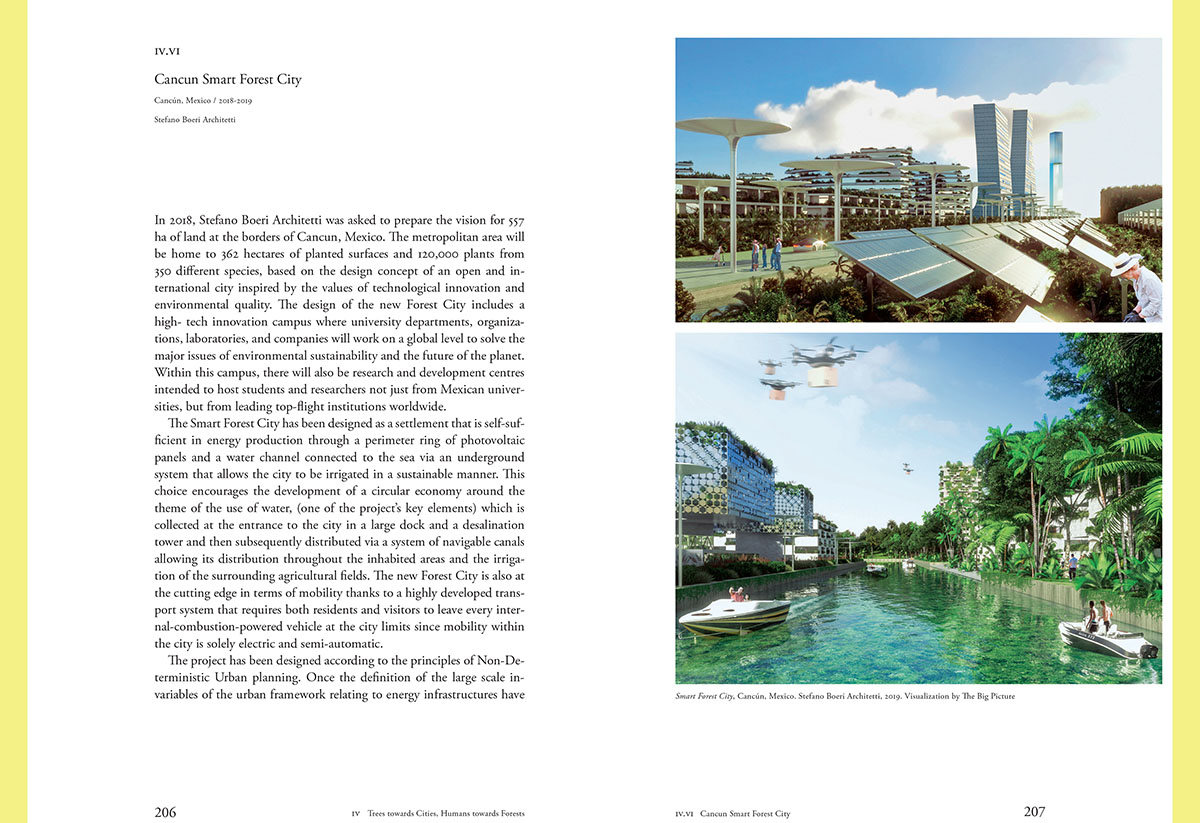 Stefano Boeri launched the idea of "A new Reciprocity Contract between cities and villages" saying "I believe the time has come to launch a major national campaign to repopulate the abandoned villages found in inland areas, which in the past in Italy, France, Germany and Spain have been the safeguards of the European countryside".

On a national scale Stefano Boeri Architetti proposed a vision of "Parco Italia", aimed at developing a coherent plan of connections and green corridors between Italian National Parks, protected areas and wooded areas throughout Italy, while including the 14 metropolitan areas, cities and villages in the plan in order to enhance biodiversity.

The third chapter, called The Urban Framework", stresses the importance of the cities’ network for a global scale vision as David Miller, Director of International Diplomacy at C40 Cities Climate Leadership explains: "(...) the impacts of both the pandemic and our environmental challenges show that cities need to be adaptable and flexible. We know that the best ones are built around a very strong public transport network, because if you have a network, people can choose to live in different neighbourhoods and still be part of the life of the city. Flexibility in planning matters as well, and the role of natural infrastructure, sometimes called green infrastructure, is critically important (…)". 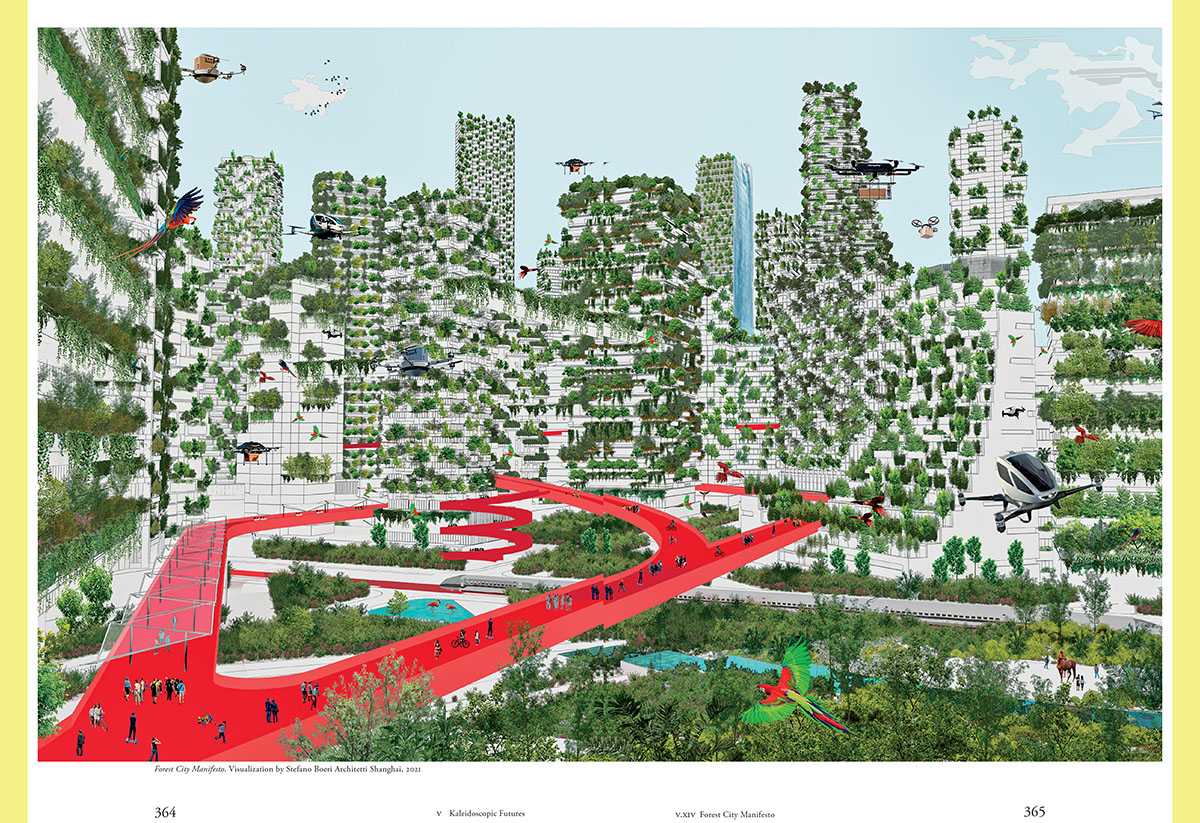 Stefano Boeri Architetti is best known for its several types of vertical forests which incorporate greenery elements through façades or main structural components of design, including masterplans - such as Vertical Forests in China, a new Vertical Forest in Egypt, Mexico's first Smart Forest City and Albania's first Vertical Forest Tower in Tirana.

Stefano Boeri Architetti's The Vertical Forest in Milan is identified as one of the devices that should represent a shifting perspective on the cityscape, the representation of the ultimate blend between the plant world and architecture.

To illustrate, Emanuele Coccia, Italian philosopher and professor at the École Des Hautes Études en Sciences Sociales since 2011, describes his view of the Milanese Bosco Verticale according to his personal experience of living in an apartment in one of the two towers, designed by Stefano Boeri in Milan: “In that apartment, any opposition that characterized modern architectural and urban planning culture became unthinkable."

"The trees were no longer outside the city: they were inside the house or rather, they seemed to be the house itself. The forest was no longer an exotic, distant reality: it was a domestic fact. Starting from Marc-Antoine Laugier - the first to imagine that the first house of the human species was built by tying together the branches of some trees - European modernity has never stopped imagining that we could go back to living in the forests, that we could build a house in the forest: the symbol of this romantic return to nature has been the ‘hut’ (...) In the same way, Stefano Boeri’s Bosco Verticale is not just a programmatic anticipation of an ecological future: it is a contraction of time that makes the future coincide with the city’s ancestral past. It is as if through those skyscrapers, mankind could return to its origins in order to get rid of it for good." 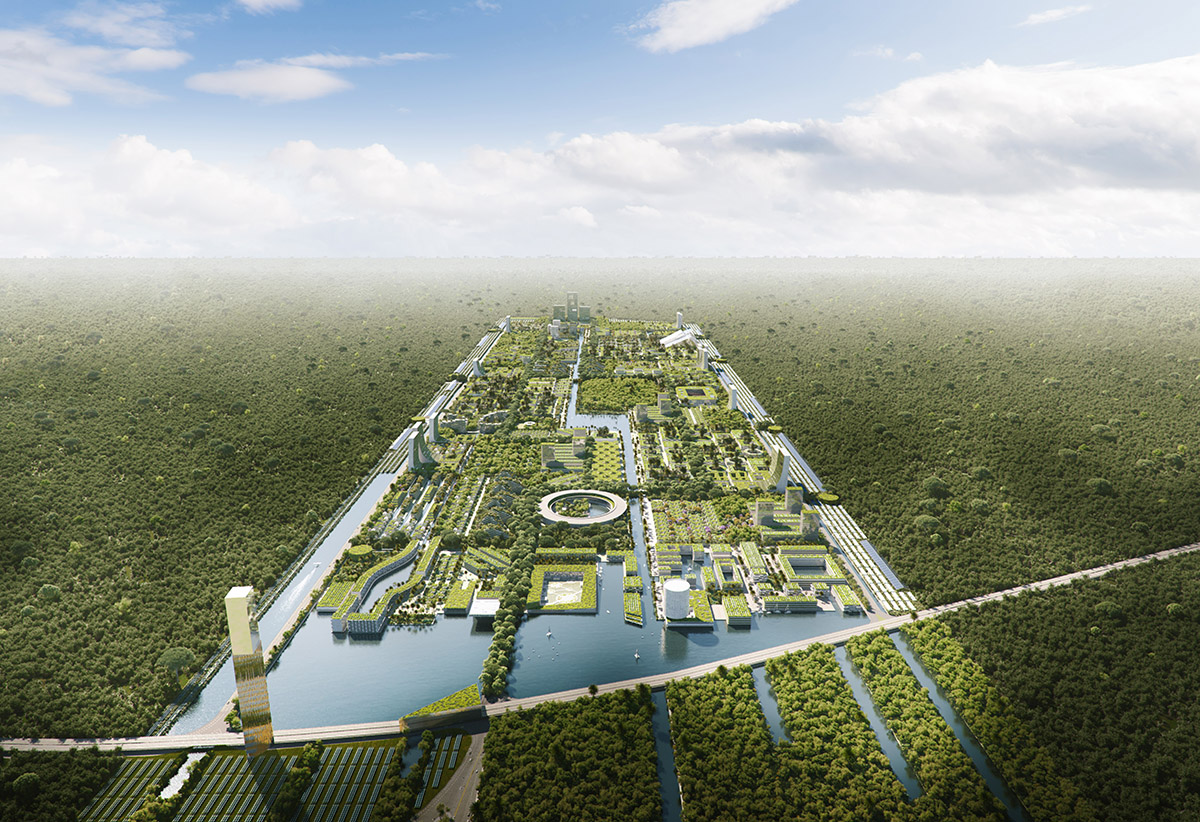 Urban forests, for example, can be a source of social equity as well as a positive force for the environment, a solution to reverse climate change.

The book presents as examples the masterplans developed by Stefano Boeri Architetti for the city of Tirana and for San Marino 2030 and the “The Green River” project for the city of Milan.

The fourth chapter, called Trees towards cities, humans towards forests, is more specifically around the topic of forestry. It covers the history of our relationship with forests and the dichotomy between the City and Nature in order to understand how and why urban and peri-urban forests are the backbone of our contemporary green infrastructures, bridging rural and urban areas and ameliorating a city’s environmental footprint as they operate at scales ranging from single trees to entire landscapes. 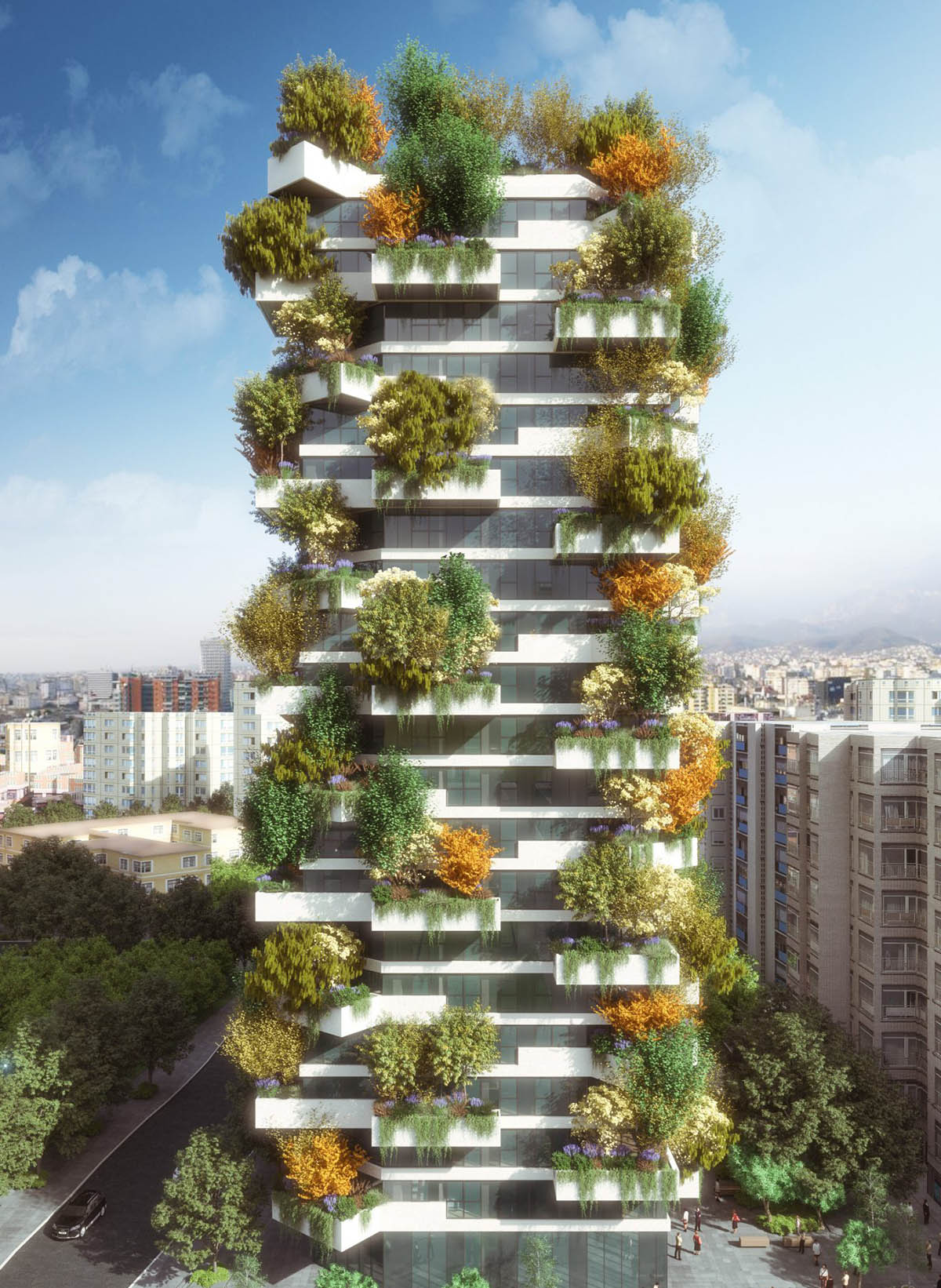 In the fifth chapter, called Kaleidoscopic Futures, the importance of re-establishing a balance, locally and globally, in the relationship between city and nature, is developed, thus becoming a structural element of regeneration.

The goals will be to develop the actions to defend, manage the existing forests, create new forests between cities, and let urban and peri-urban forests develop and grow within our cities. The perspective of South-East Asia (in particular India) and China on the development of sustainable practices within the urban fabric is analyzed.

Jane Goodall, Ethologist and Conservationist, explains: "(…) things are changing as it is increasingly understood that the greening of deprived areas saves money in the long run by reducing crime and improving health. When the city council was asked to plant trees along the sides of the roads in Dar es Salaam, the capital of Tanzania, the effect was soon very noticeable. In the tropics trees grow quickly and soon the atmosphere changed dramatically – for the better. The endless traffic jams were more bearable when leafy branches shielded one from the glare and the heat, people walking beside the roads looked less stressed, vendors sat by their roadside stalls looking relaxed in the shade. (…) My last word is a call to action. It is vitally important, for the future of our planet, that along with the greening of our cities there should be a major effort to incorporate environmental education for our children. (…) it is so desperately important that we enable our children to reconnect with and learn to respect the natural world and understand that we are part of it and depend on it for our very existence. (…) bringing nature into our cities is a crucial part of our fight to save the planet for future generations."

Supported by: Graham Foundation for Advanced Studies in the Fine Arts

All images courtesy of Stefano Boeri Architetti unless otherwise stated.