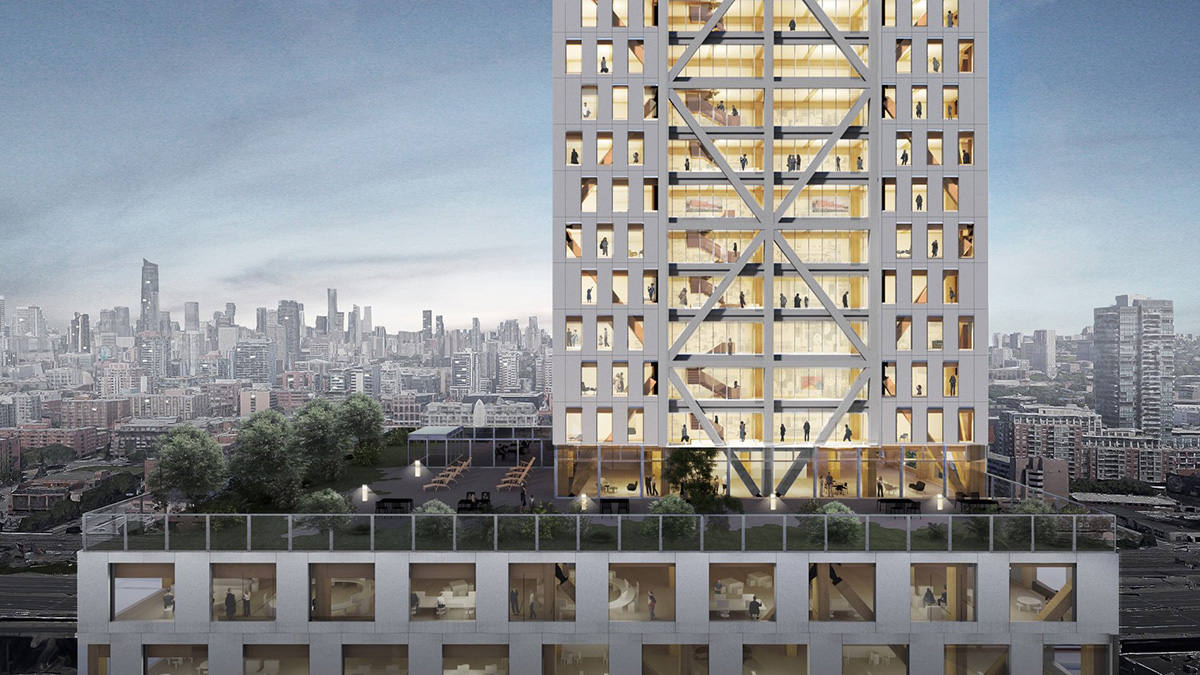 Sidewalk Labs, a subsidiary of Google’s parent, Alphabet, has releases its new digital study for mass timber buildings that could reach at 35 storeys in cities.

The study has been developed as part of Sidewalk Labs' Mass Timber City in Toronto, which was decided to be scaled back after a vote held in November 2019.

Called Proto-Model X (PMX), the study was detailed in blog posts, written by project head Cara Eckholm, and set as a "digital proof-of-concept" to explore how this model could also work in higher buildings in cities. Sidewalk Labs worked with Michael Green Architecture, Gensler on this project. 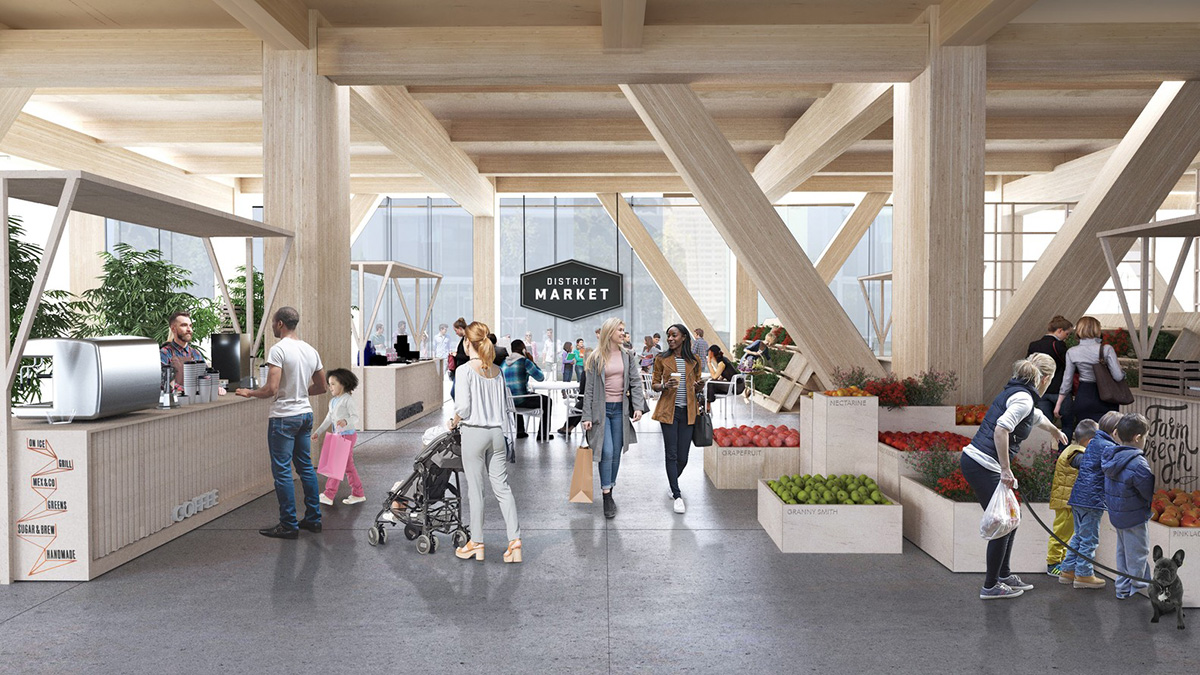 The company had released its new masterplan for waterfront Toronto in February, 2019, including Snøhetta and Heatherwick Studio-designed buildings.

However, in a short time the plans stirred a controversy and raised privacy concerns "over the use of the collected data from the neighbourhood and its sharing with the third parties." 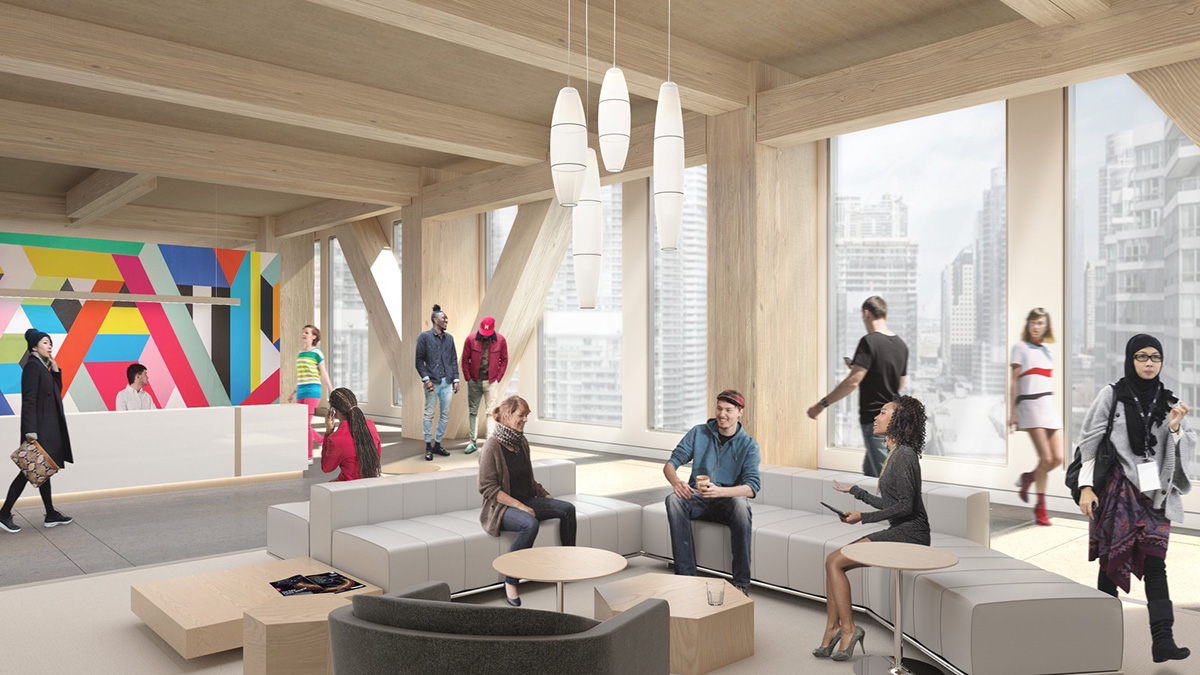 In November 2019, it was announced that the plans were voted unanimously to limit the team’s original plans. Released in a blog post on January 24, 2020, Eckholm's article now gives detailed insights into the mass timber high-rise towers' hypothetical performance. 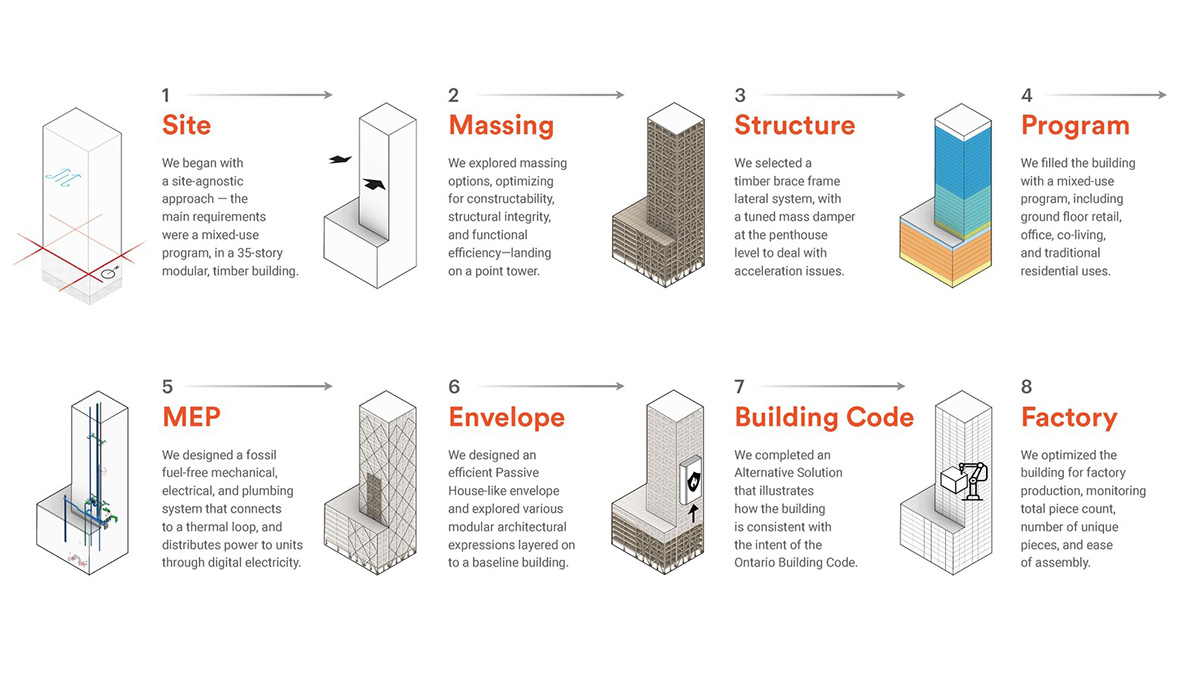 In the first article, entitled Exploration 1: How to design a timber building that can reach 35 stories, the article states that "To gain insight into the performance of our 35-story mass timber proto-model, PMX, the team modeled how it would compare to a traditional concrete building of the same size."

"PMX was approximately 2.5 times lighter than its concrete counterpart, and when we began doing wind analysis, we discovered that PMX was reacting more like a building of 40 or 50 stories. That’s one of the reasons why many of the tall timber buildings completed to date are actually hybrids, reinforced at their cores by concrete walls or steel bracing." 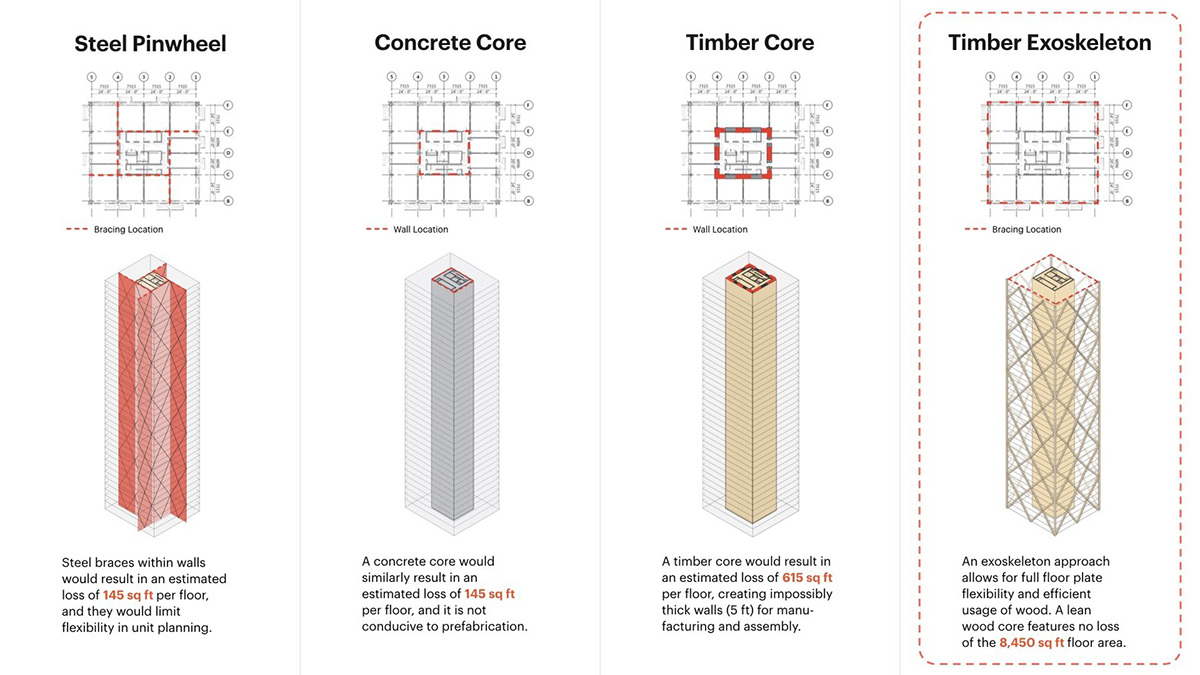 The article also added that according to the company's findings, a timber exoskeleton performs better than other structural systems with respect to maximizing floor plate efficiency.

"After the team evaluated a series of options, it became clear that the only pure-timber structural system that would work for PMX was an exoskeleton form," the article stated. 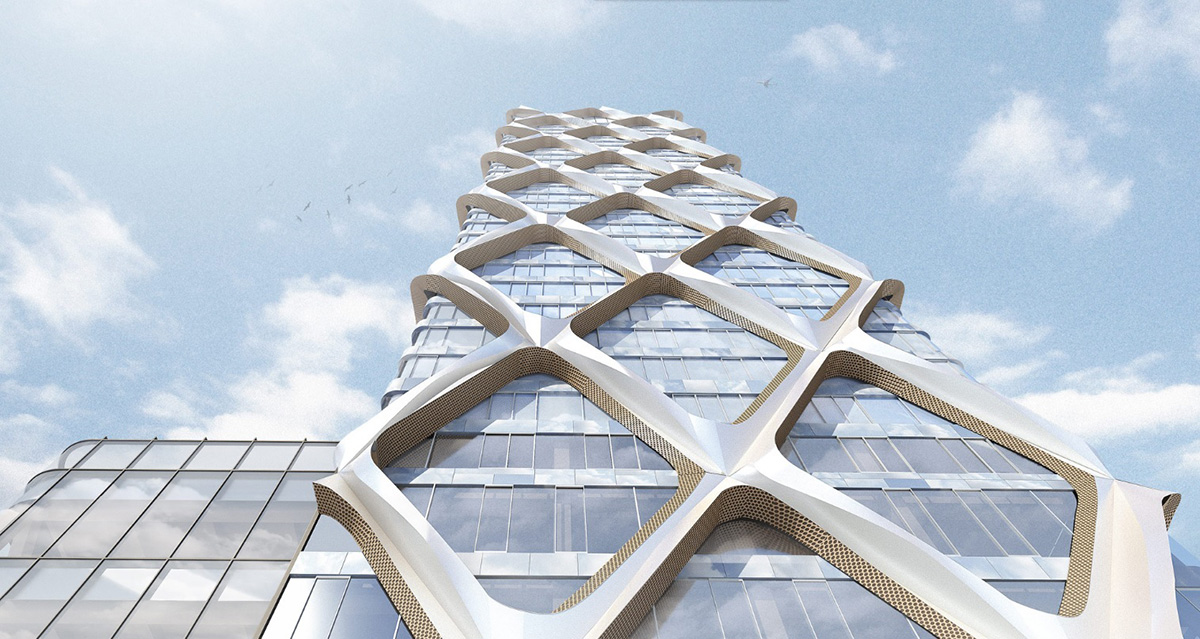 In the second article, entitled Exploration 2: How to design a timber building that’s easy to make in a factory, the article explores advantages of timber’s potential to use in off-site manufacturing.

The company also produced some "representative images of the kit" of parts that form the PMX building to understand the analogy of high-rise. 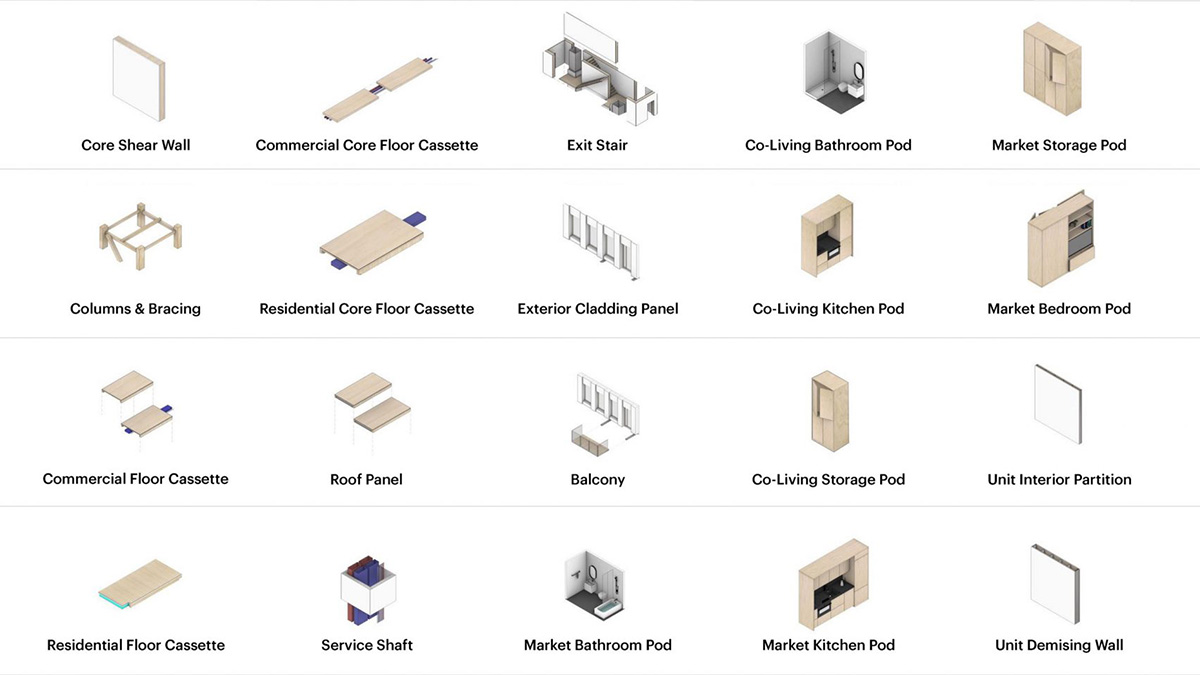 Representative images of the kit of parts that form the PMX building. Image © Michael Green Architecture 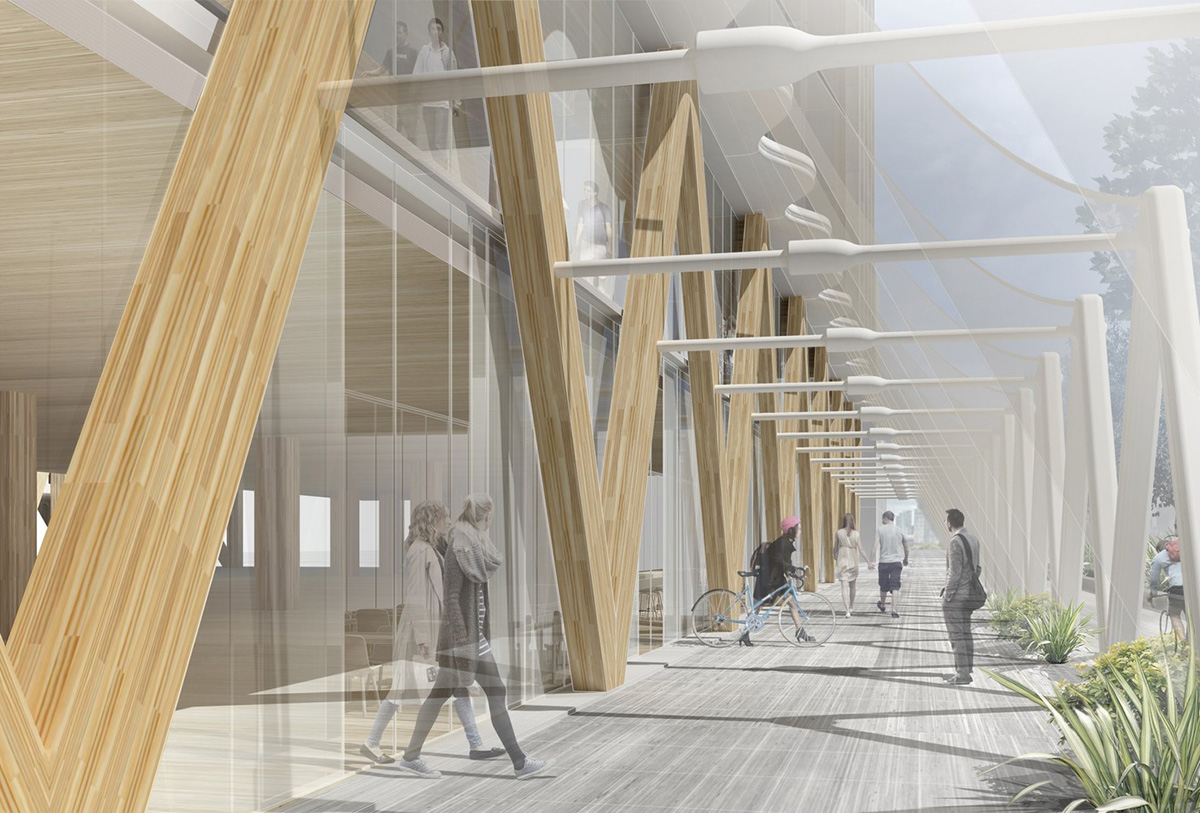 It said "everything in this “kit of parts” has to be modular and interlocking, including infrastructure like plumbing."

"Standardization of the parts enables the manufacturing process to be faster and more predictable, and their interlocking nature enables easy on-site assembly. Collectively, these traits speed up construction, making buildings cheaper to complete and driving affordability for builders and tenants."