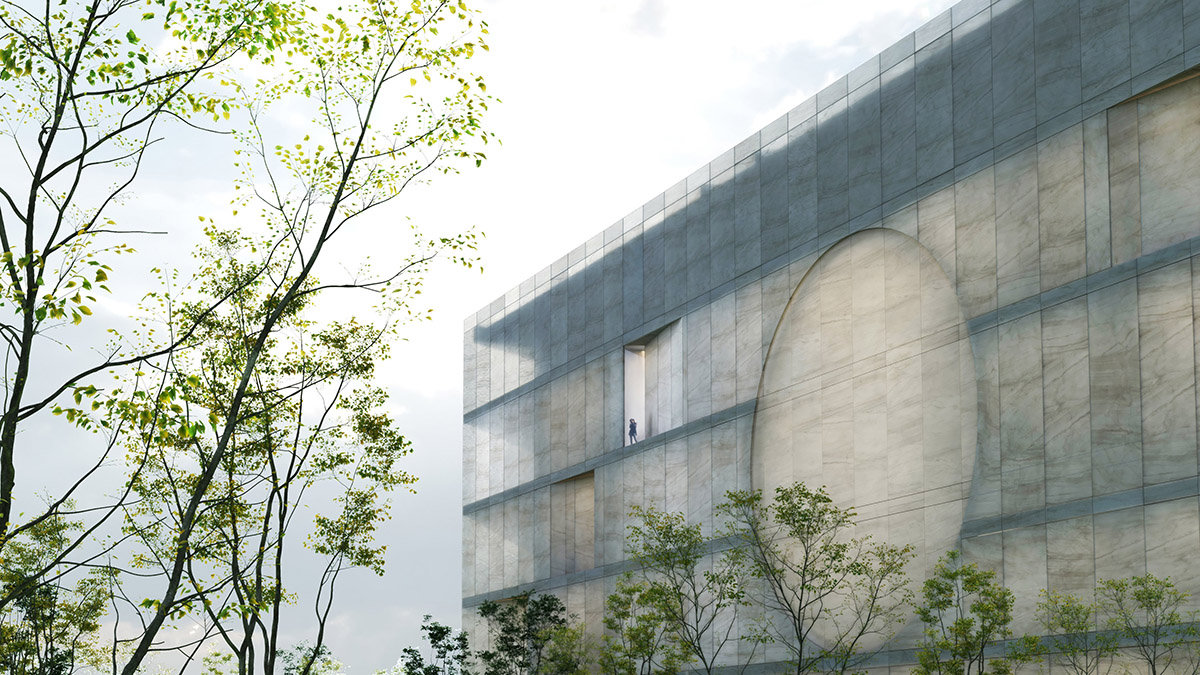 Envisioned as a porous structure, the library features a giant core that is shaped through circular openings taking natural lights and providing more vistas throughout the building.

"We imagine libraries as culture generators and public cornerstones of our civilization. Libraries are buildings that help create and preserve culture by fostering the creativity and imagination inherent in the human condition," said the studio.

"Consequently the architecture of a library, in addition to providing a public service by addressing its program requirements, should also be a source of inspiration and awe." 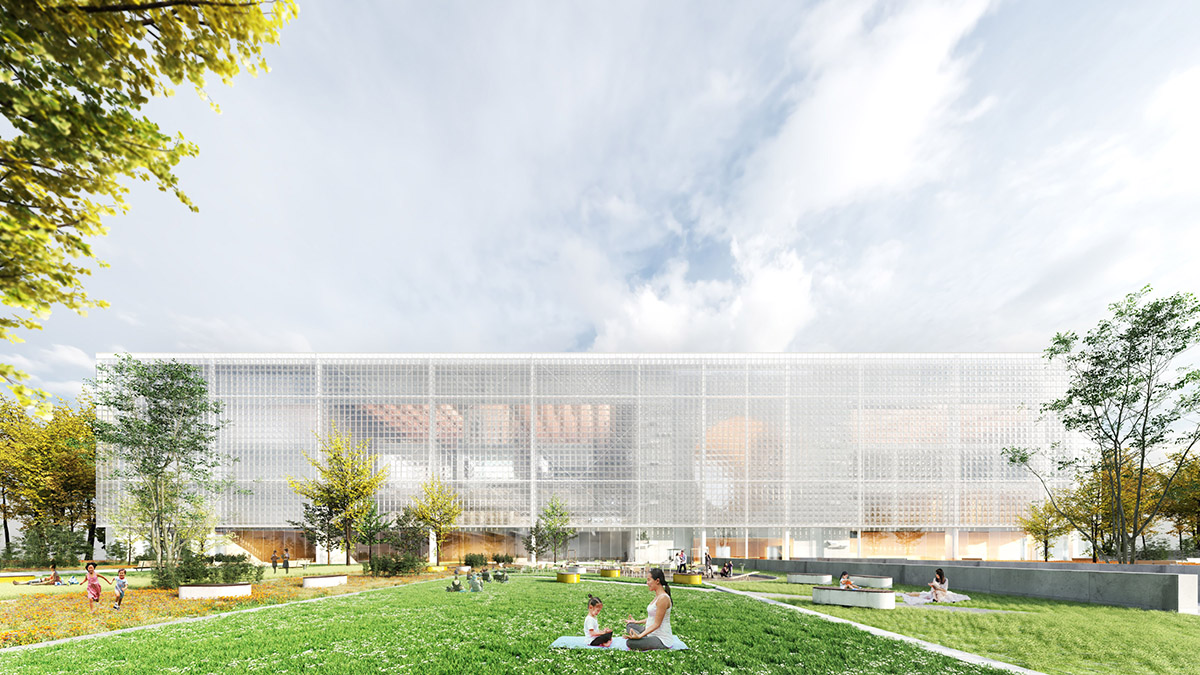 The atrium acts as the main element of the building that helps interchange of the culture for readers.

The new New City Main Library at Gwangju library is conceived as both an efficient device for learning and a temple in which to to celebrate and elevate culture, intellect and the free exchange of ideas. An inspirational cauldron of information, architecture and people where knowledge is obtained, preserved and shared. 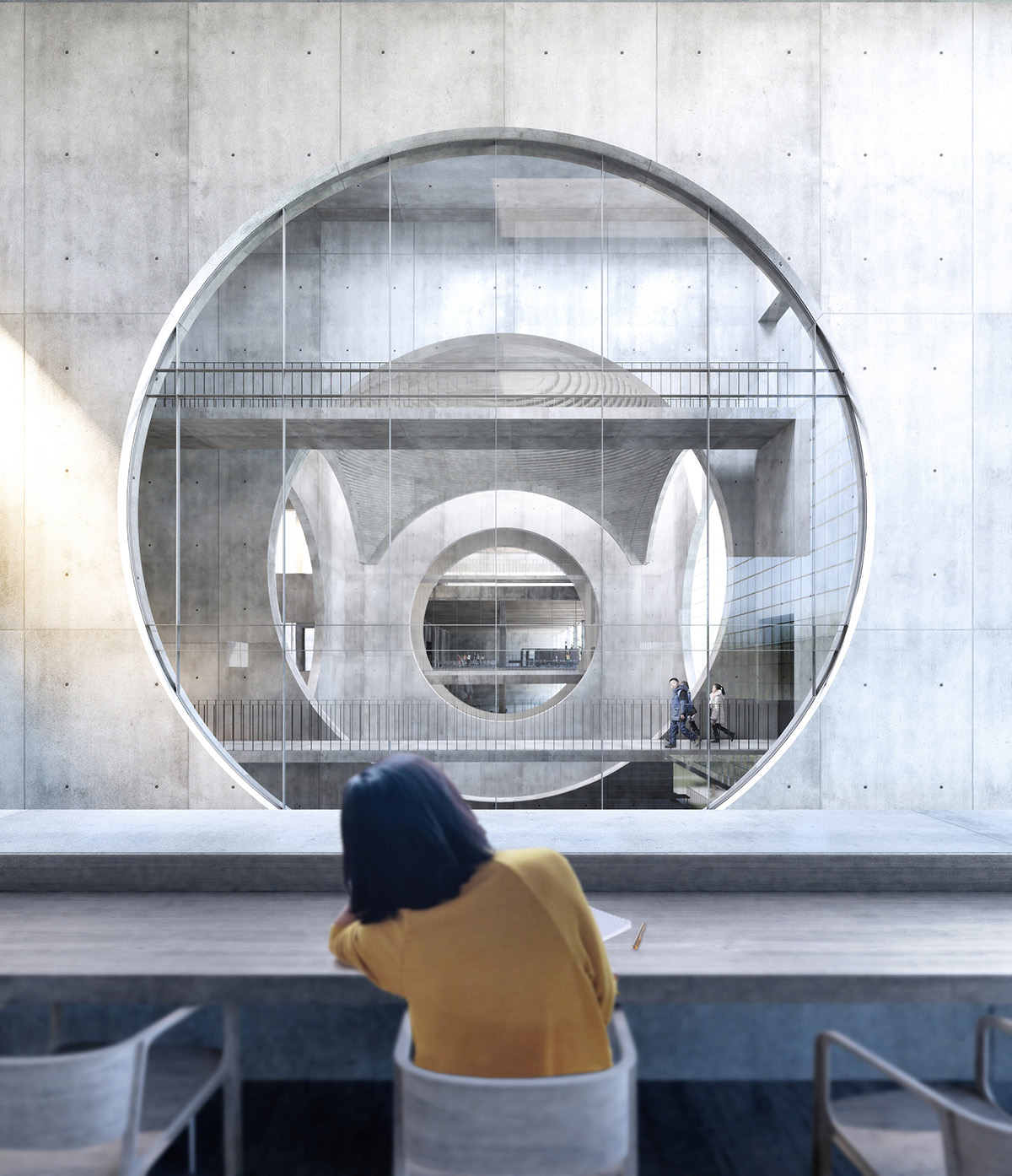 The public side of the library is accessed through a magnificent four-story that aims to inspire visitors and properly represent an entrance to a culturally transcendent building. The entry lifts the visitor’s spirit inviting them to participate and contribute to the cultural temple they have just entered.

Above the main entry, a large concrete floating dome levitates over the space welcoming visitors into a ethereal, transcendent space where the laws of gravity seem to have been temporally suspended. 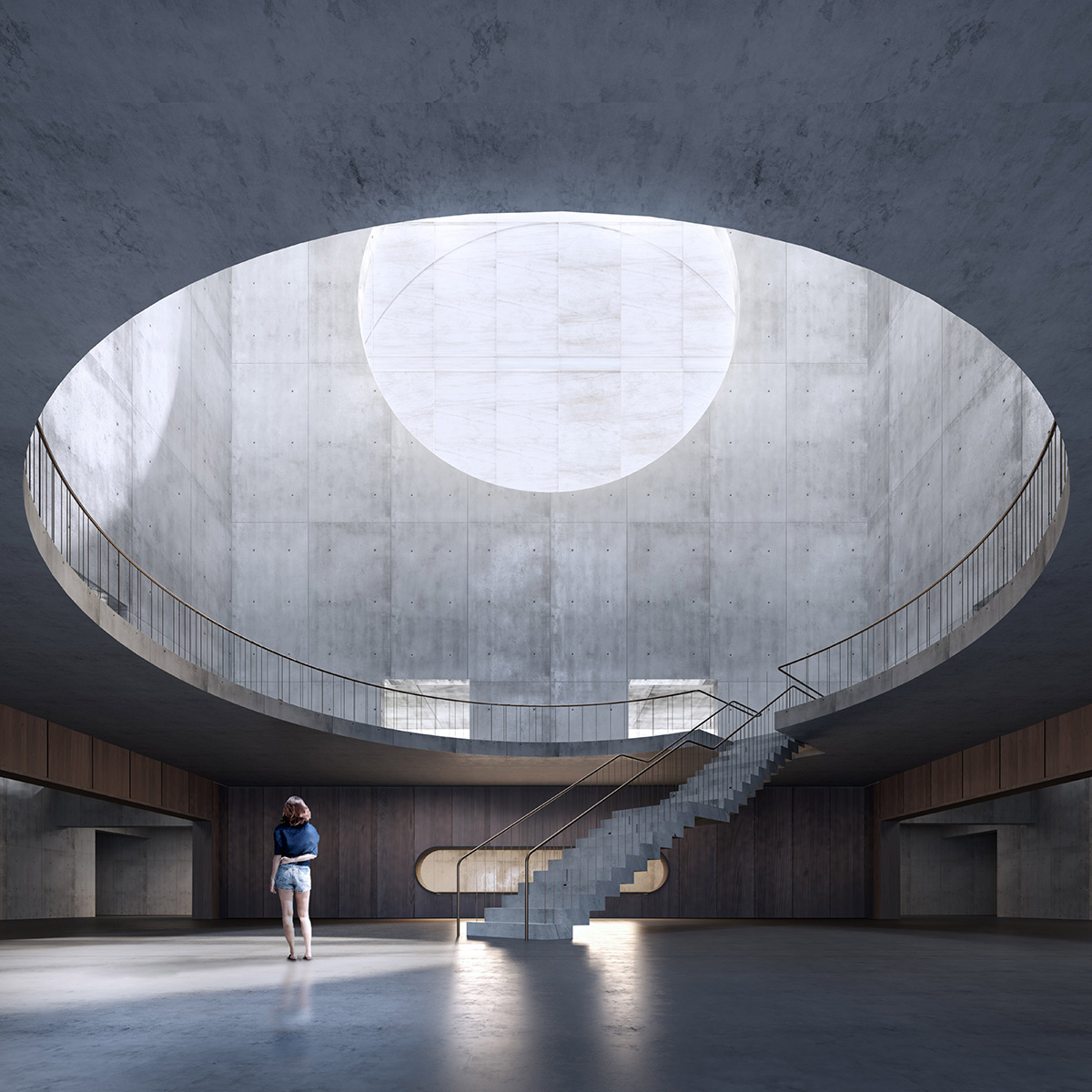 The building is placed along the south border of the site acting as a programatic backdrop to the rest of the Master Plan amenities.

The site plan arrangement and the four story building form factor, allows for a large open space to be developed immediately north of the building creating a new park resource between the old factory and the new library. 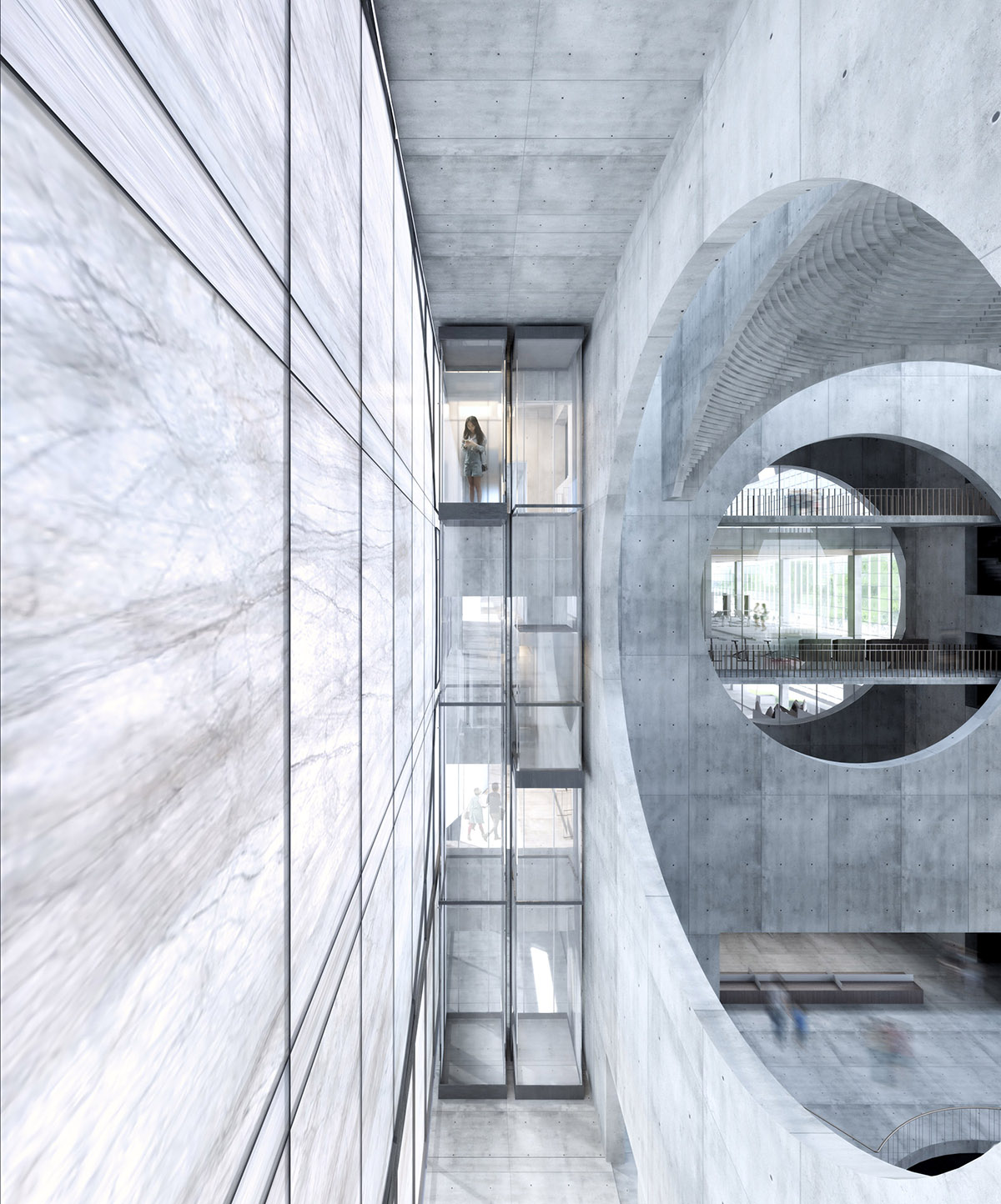 The four story library, which is 26 meters wide by 142 meters long, is organized into two distinct overall zones, a public zone and a private zone. The Public zone of the building is comprised of the core programs for the library and is located at the west end of the longitudinal arrangement.

The Private zone holding the library archive, restricted personnel areas and associated functions, is located at the east of the plan. The specific location of the book depository enables the potential expansion of future reading rooms into the existing factory. 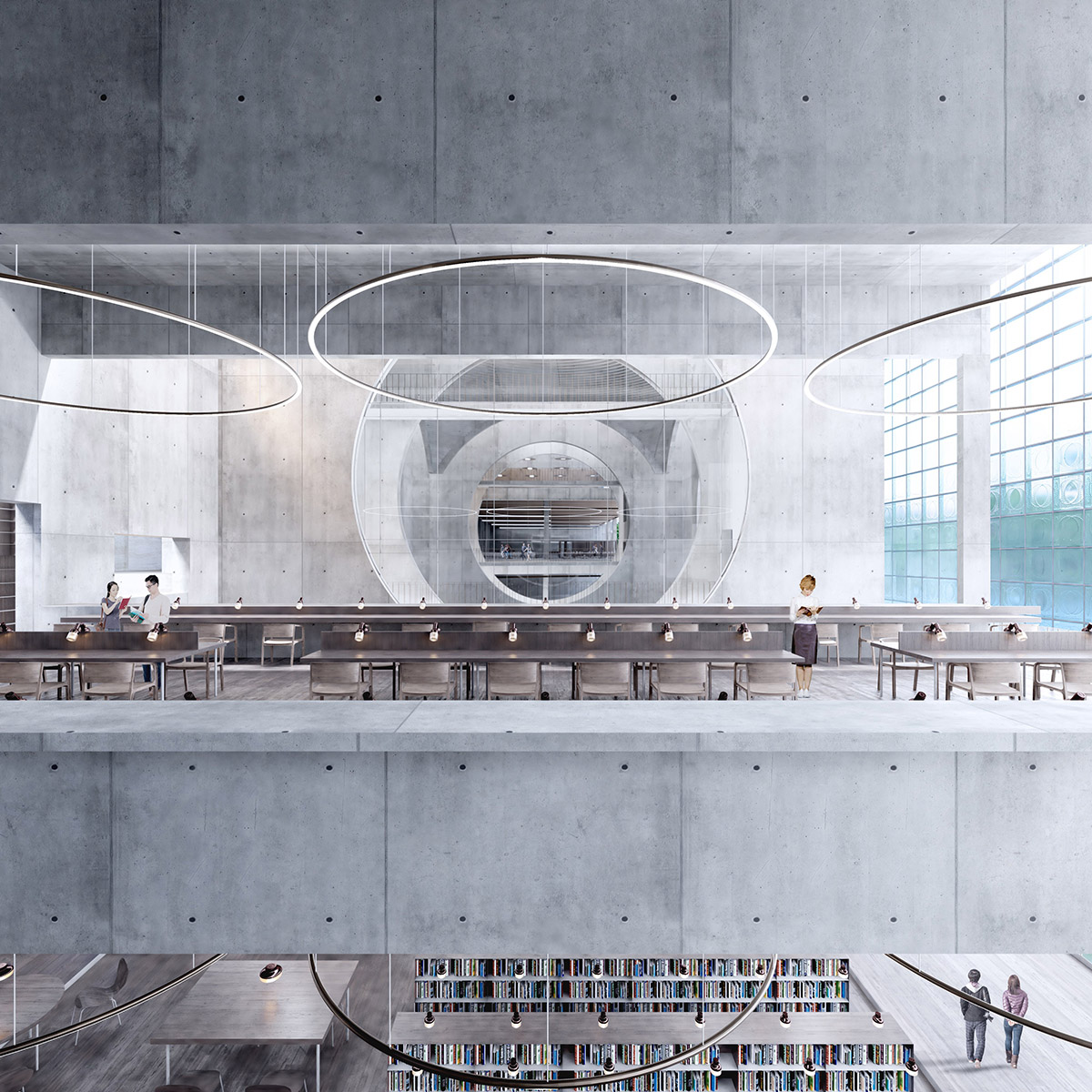 The main entry is the heart of the project attempting to capture, through the use of scale, light and symbolic meaning, the significance of the building as a generator of culture.

The entry elevates and celebrates culture through the experience of the physical space and the symbolic nature of the geometric forms that surround it. The space makes subtle references to traditional Korean symbolism through the use of four large oculi which represent the four elements usually present as trigrams in the Korean national flag: Heaven (East), Earth (West), Fire ( South) and Water (North). An additional circular opening between the ground floor is also symbolic of the Taegeuk magnifying the relevance of the library in the public realm. 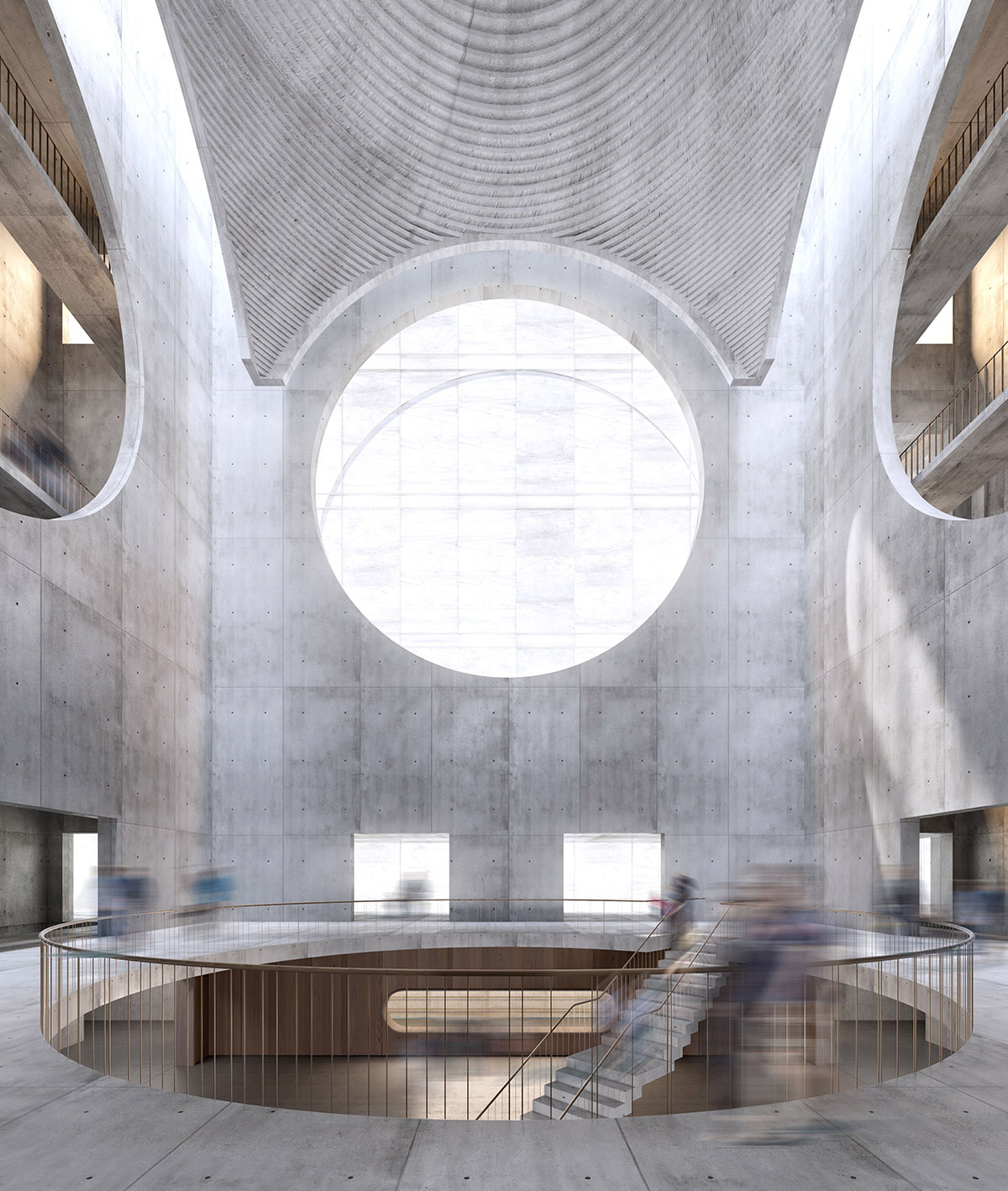 Above the main entry, a large concrete dome levitates over the entire space giving the impression that, within this ethereal environment, the laws of gravity have been temporally suspended. The dome is structurally supported from above allowing natural light to filter though its perimeter giving the impression that the large mass of concrete hovers effortlessly above the space.

The main entry also acts as the circulation interchange for the entire library articulating user traffic flows between the East and the West Wings of the library and presenting two different access points. The main access located at the north end of the building and a secondary entry point located on the south facade. 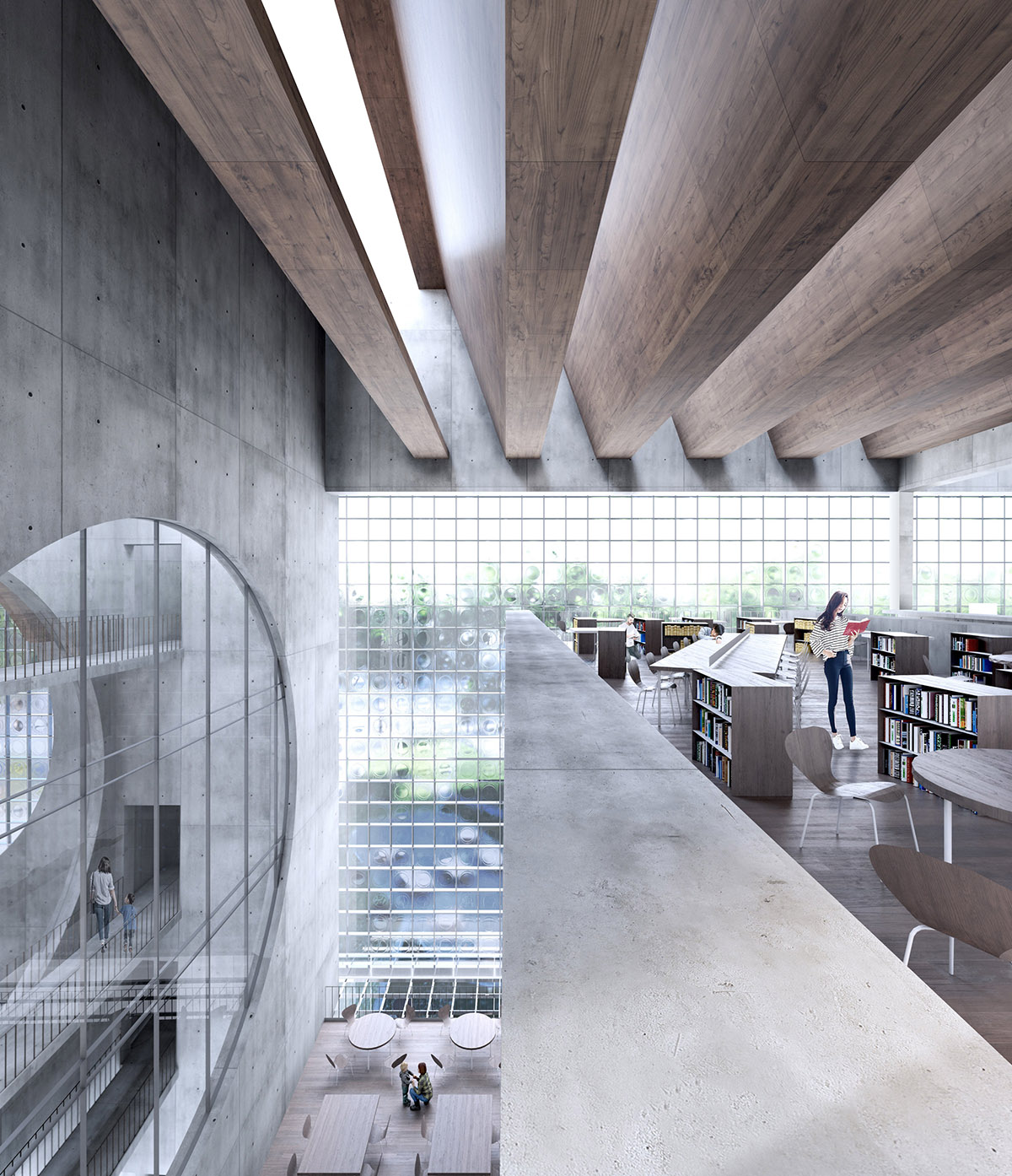 "Visual continuity is, nevertheless, achieved through the large oculus which connects the library visually to the entrance space and the cafeteria spaces beyond," added the architects.

"Each tray is able to provide book storage reading areas and different desk arrangements aiming always at maximizing flexibility for the library use. The library reading room is directly connected at ground floor to the book depository space and is managed by a program that separates both areas." 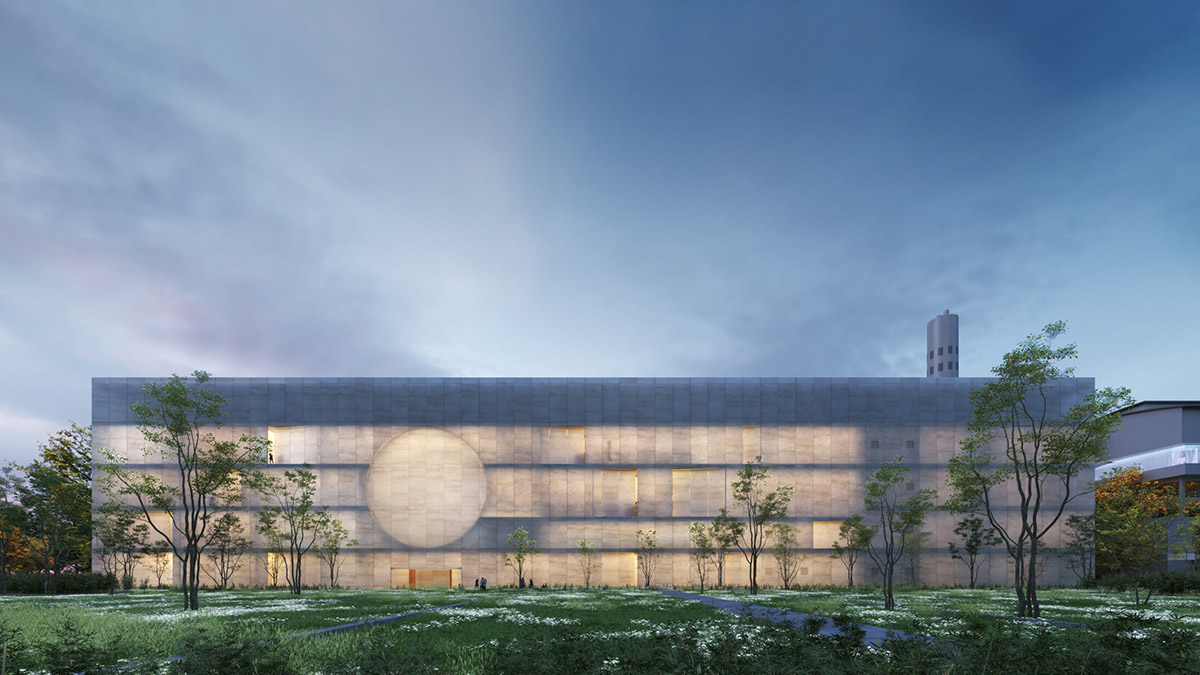 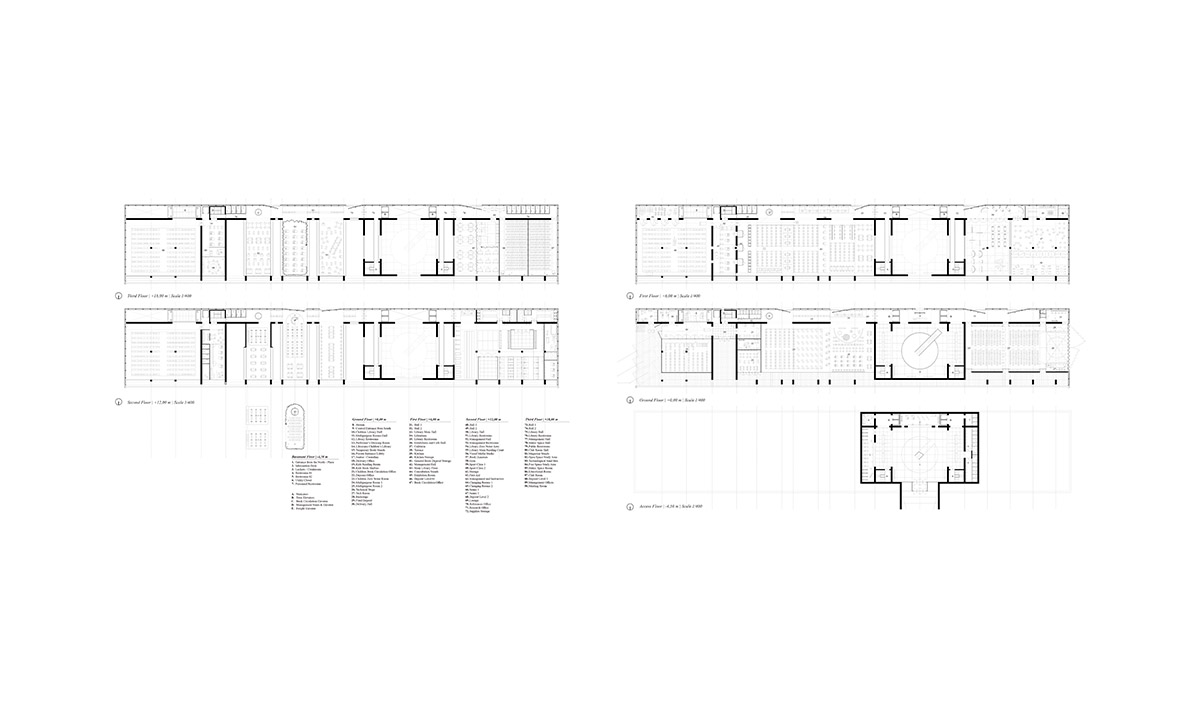 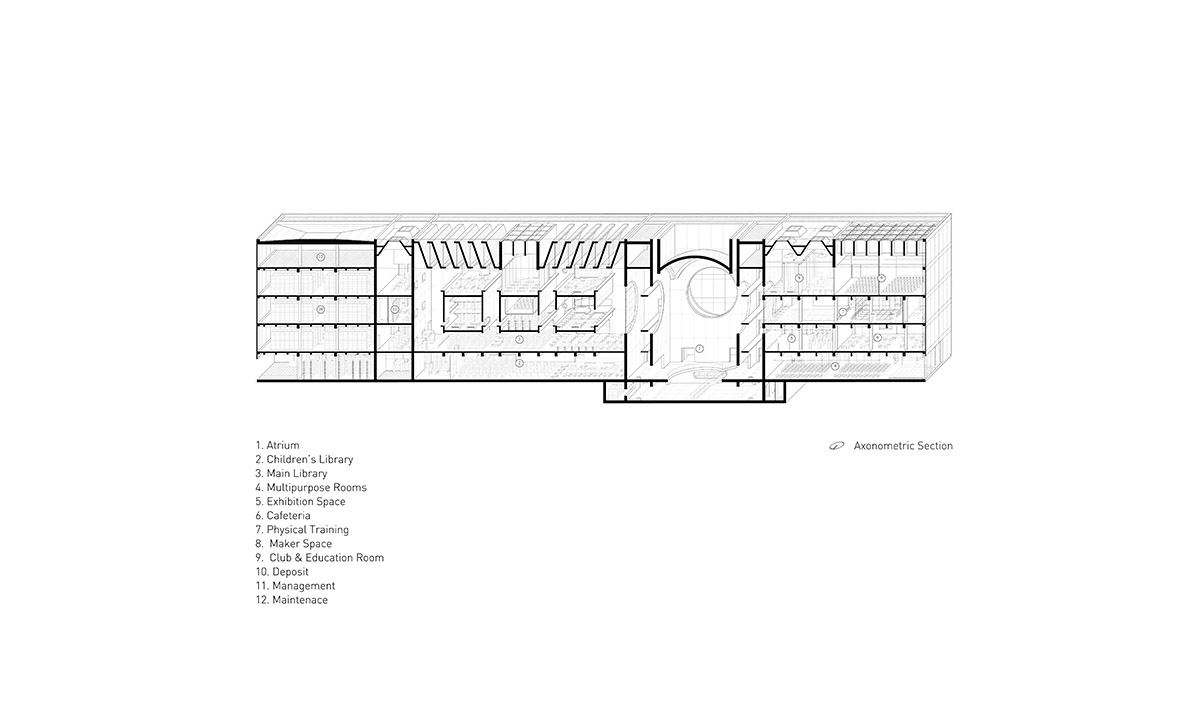 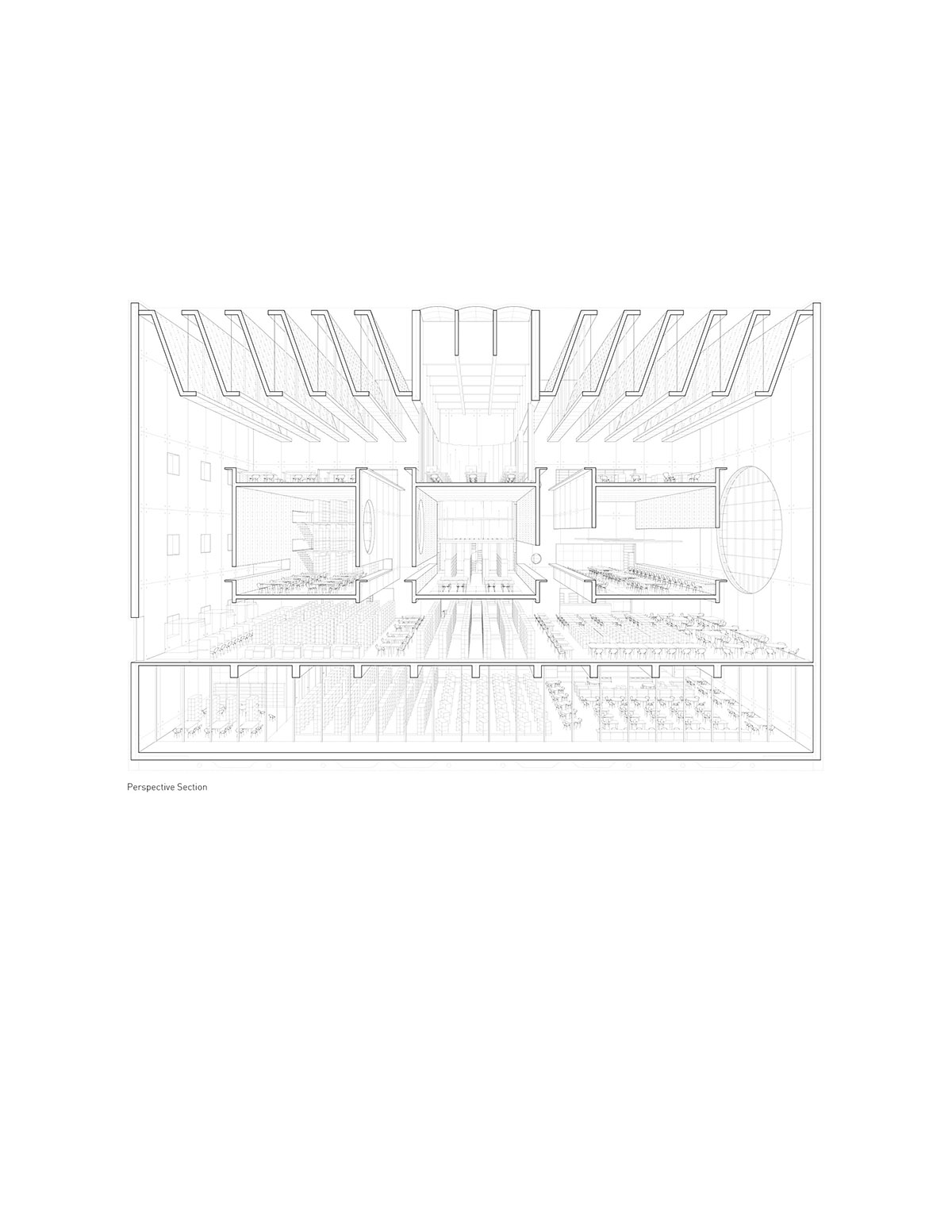 All images courtesy of STLarchitects