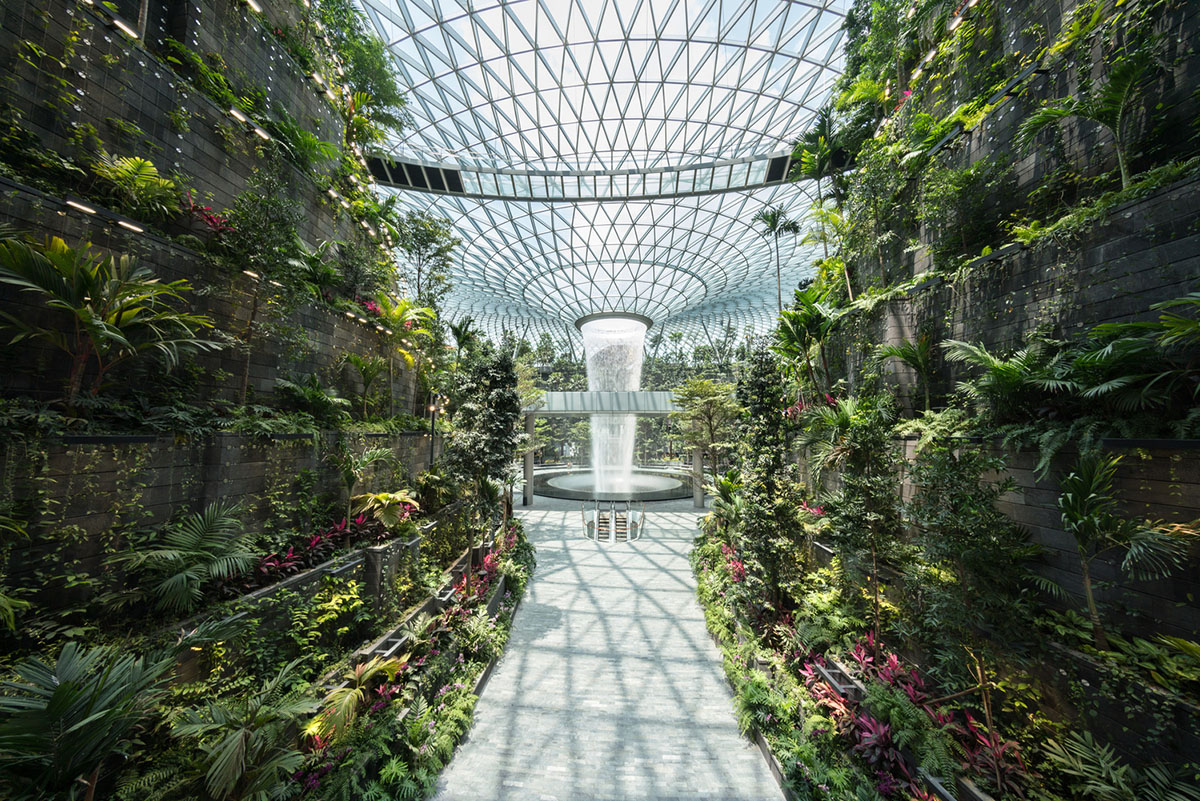 World's tallest indoor waterfall has been designed by Safdie Architects to reimagine the center of an airport as a major public realm attraction at the Jewel Changi Airport in Singapore.

Named the Rain Vortex, the new indoor structure was designed to transform the internal amenities into a light and sound show in the evening.

Surrounded by a plenty of lush vegetation, the structure will also help to cool off the interior space and create airflow in the landscape environment, collecting significant rainwater to be re-used in the building. 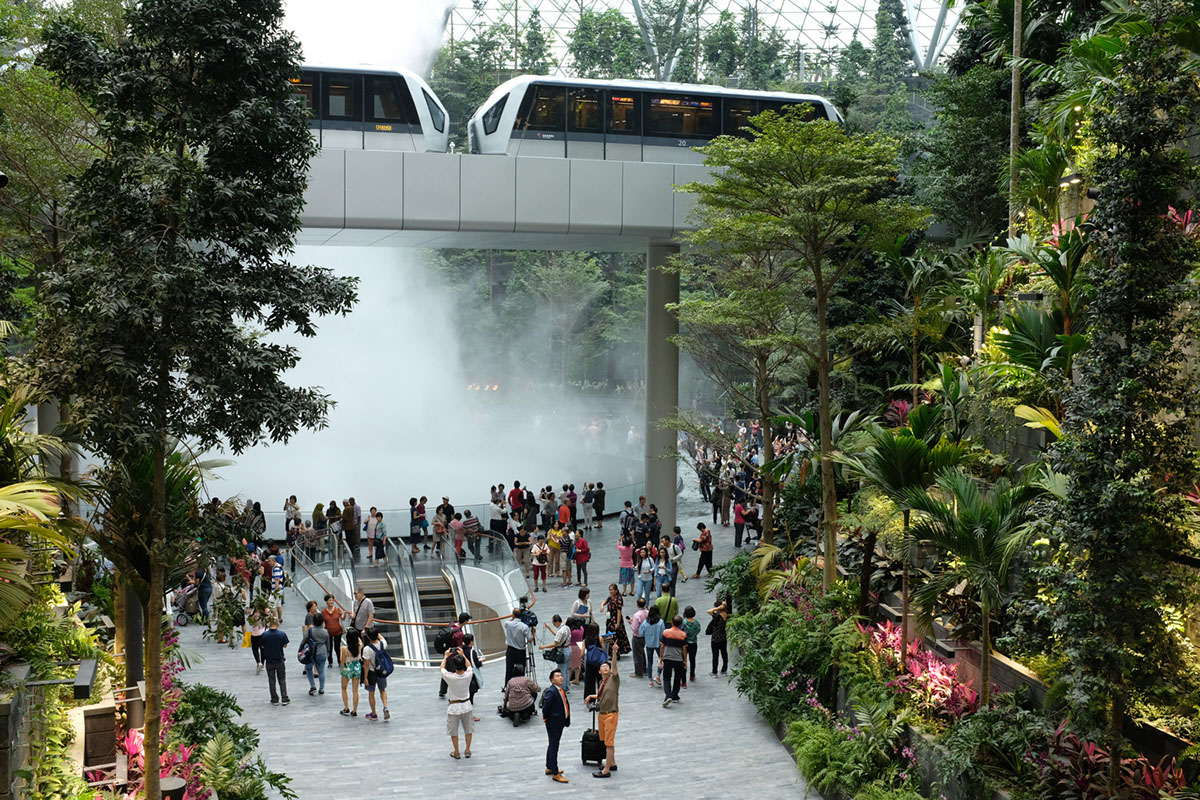 "During the region’s frequent and powerful thunderstorms, recirculated, natural rainwater will flow at more than 10,000 gallons per minute, which helps provide cooling and airflow in the landscape environment, collecting significant rainwater to be re-used in the building," said Safdie Architects.

The Jewel Changi Airport offers a range of facilities for landside airport operations, indoor gardens and leisure attractions, retail offerings and hotel facilities, all under one roof. Its distinctive dome-shaped façade is made of glass and steel adding to Changi Airport's appeal as one of the world's leading air hubs. 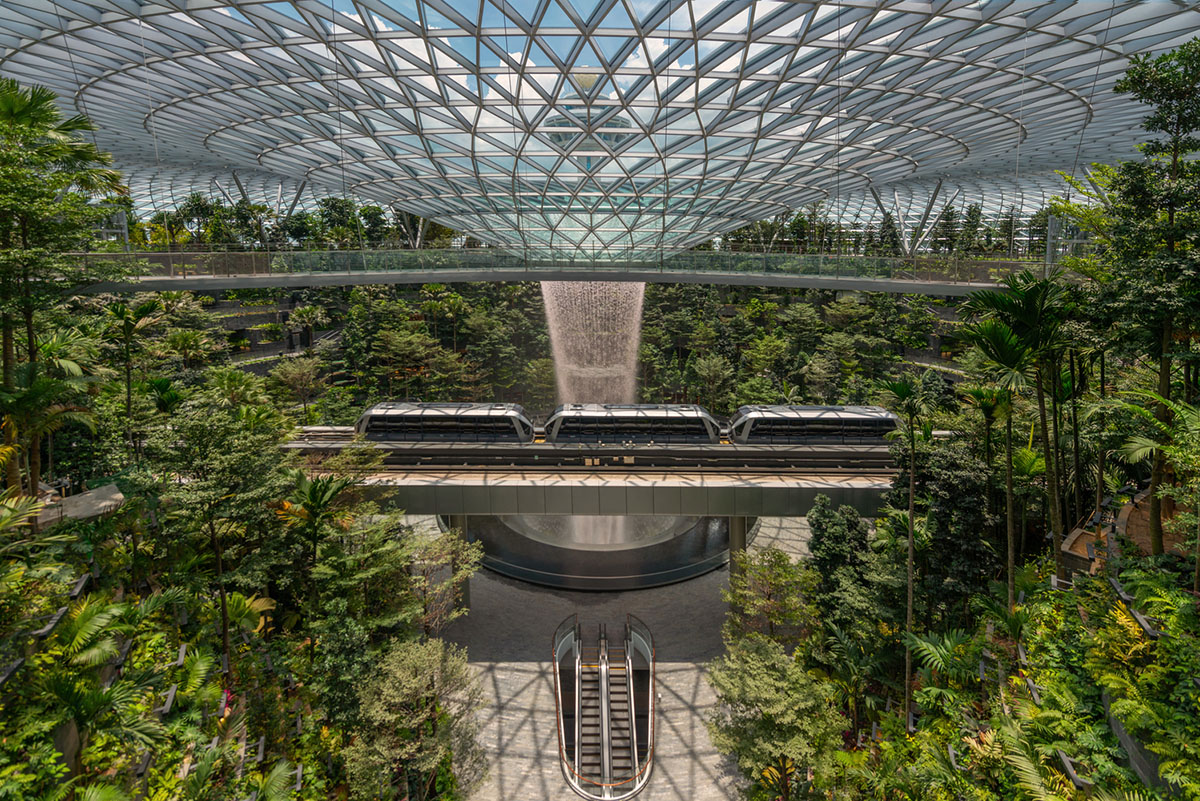 "Jewel weaves together an experience of nature and the marketplace, dramatically asserting the idea of the airport as an uplifting and vibrant urban center, engaging travelers, visitors and residents, and echoing Singapore’s reputation as ‘The City in the Garden", said Moshe Safdie. 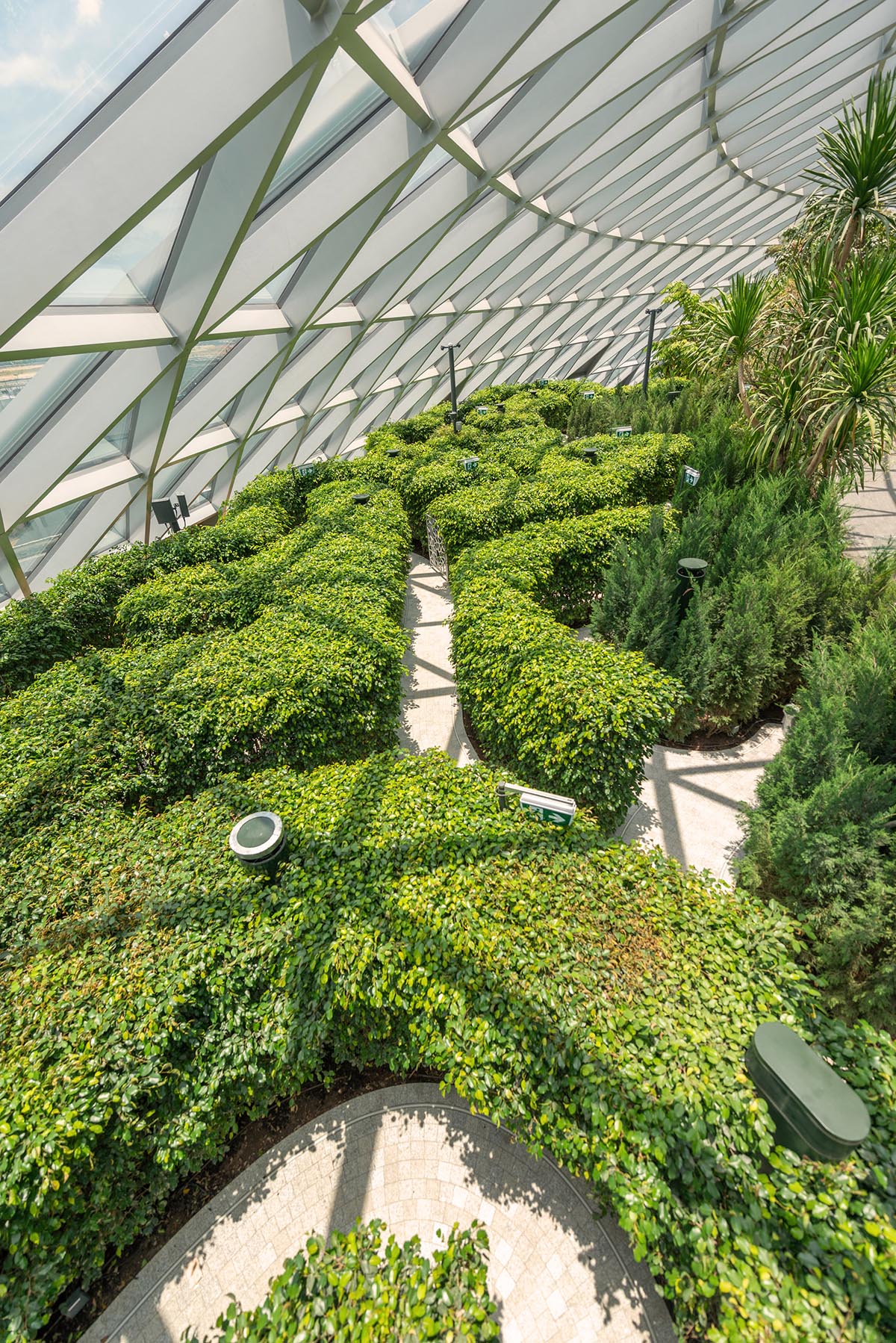 Shaped with the geometry of a torus, the building is designed as a new central connector between the existing airport terminals at Singapore Changi Airport. At its core is the Forest Valley, a terraced garden attraction that offers many spatial and interactive experiences for visitors. 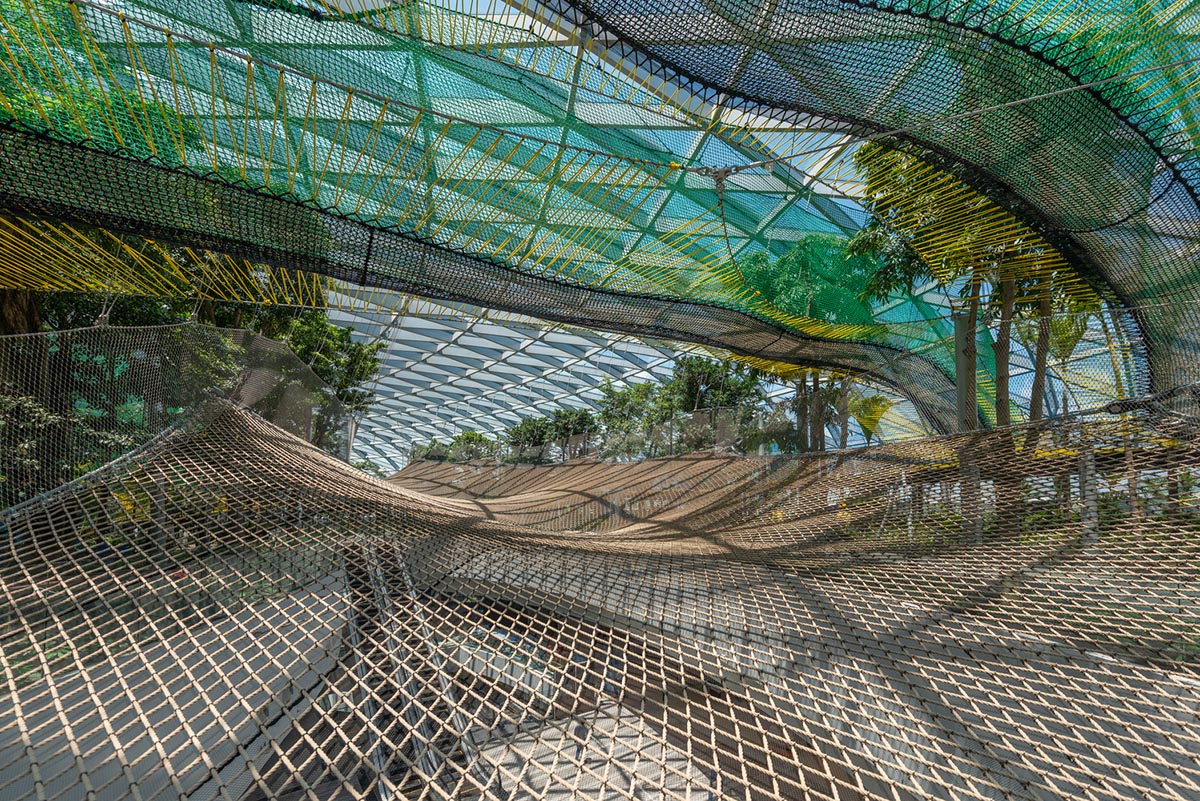 The Forest Valley also includes walking trails, cascading waterfalls, and quiet seating areas. Surrounding the gardens is a multi-level retail marketplace on five levels, which features access to the garden via a series of vertical canyons. At the apex of Jewel’s glass roof is an oculus that showers water down to the center of the building. 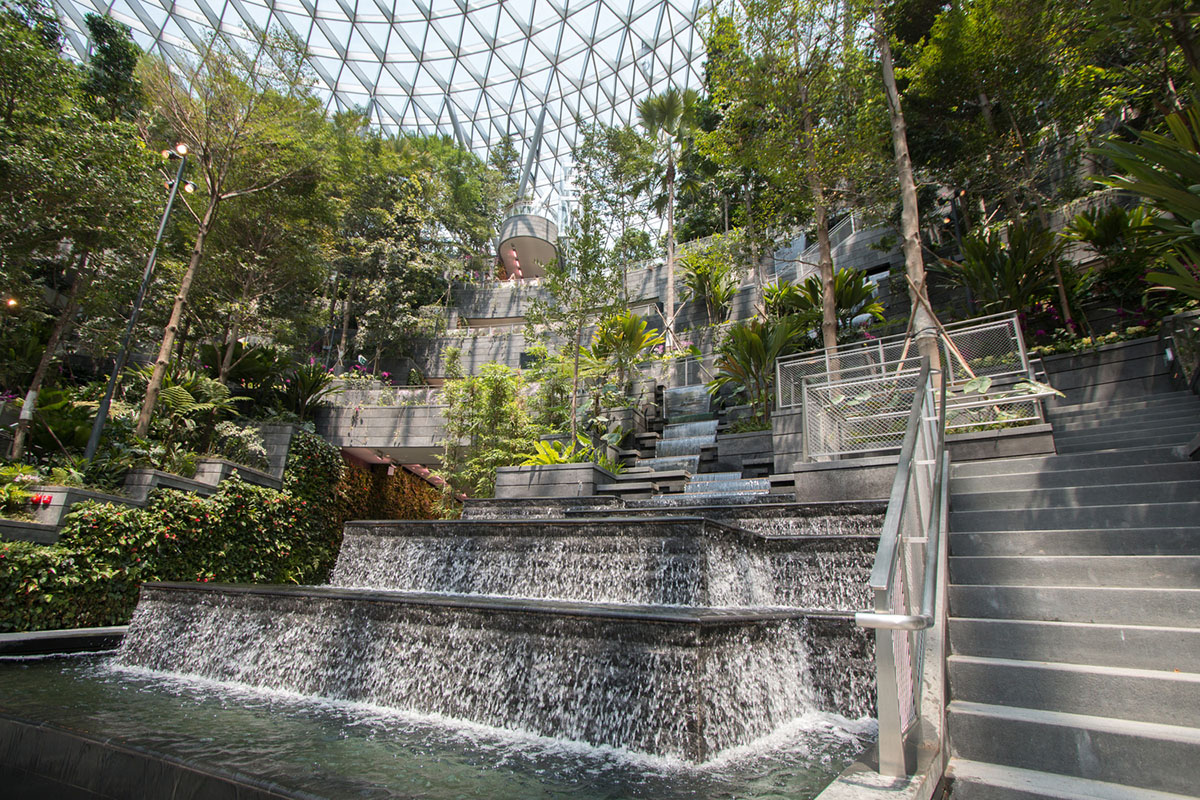 "Jewel represents an innovation in the world of lifestyle/retail design, with a one-of-a-kind relationship between garden and marketplace. In addition, nowhere in the world has a building been constructed that integrates the public realm with an airport facility so closely," said Safdie Architects.

"The building extends Changi Airport’s principal function as a transit hub, to a public gathering space for Singaporeans and international travelers, establishing a new model for airports as discrete destinations for shopping, entertainment, and social activity," added the firm. 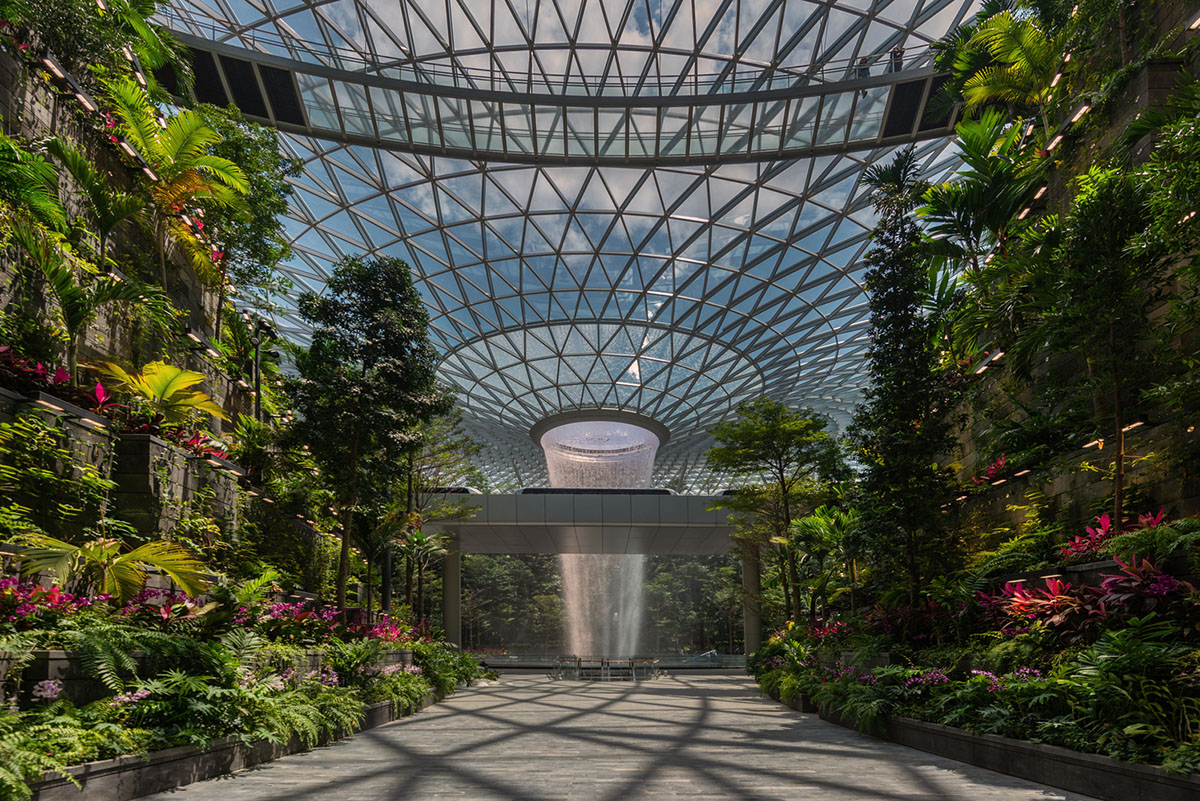 On the 5th level, there is the Canopy Park, which includes 14,000 square meters of attractions integrated within the garden spaces. These include net structures suspended within the trees, a suspended catenary glass-bottom bridge walk, a planted hedge maze and mirror maze, and feature installations completed in collaboration with internationally acclaimed artists. There is also a topiary walk and other horticultural displays. On the north side of the park is an event plaza space big enough to serve 1,000 people.

Conceived to serve the people of Singapore and travelers equally, the building is directly connected to the Changi Bus Terminal and the airport’s Terminal 1. It is also accessible from Terminals 2 and 3 via pedestrian bridges, and the interterminal train crosses through the gardens, giving visitors with limited time a glimpse into the Forest Valley. 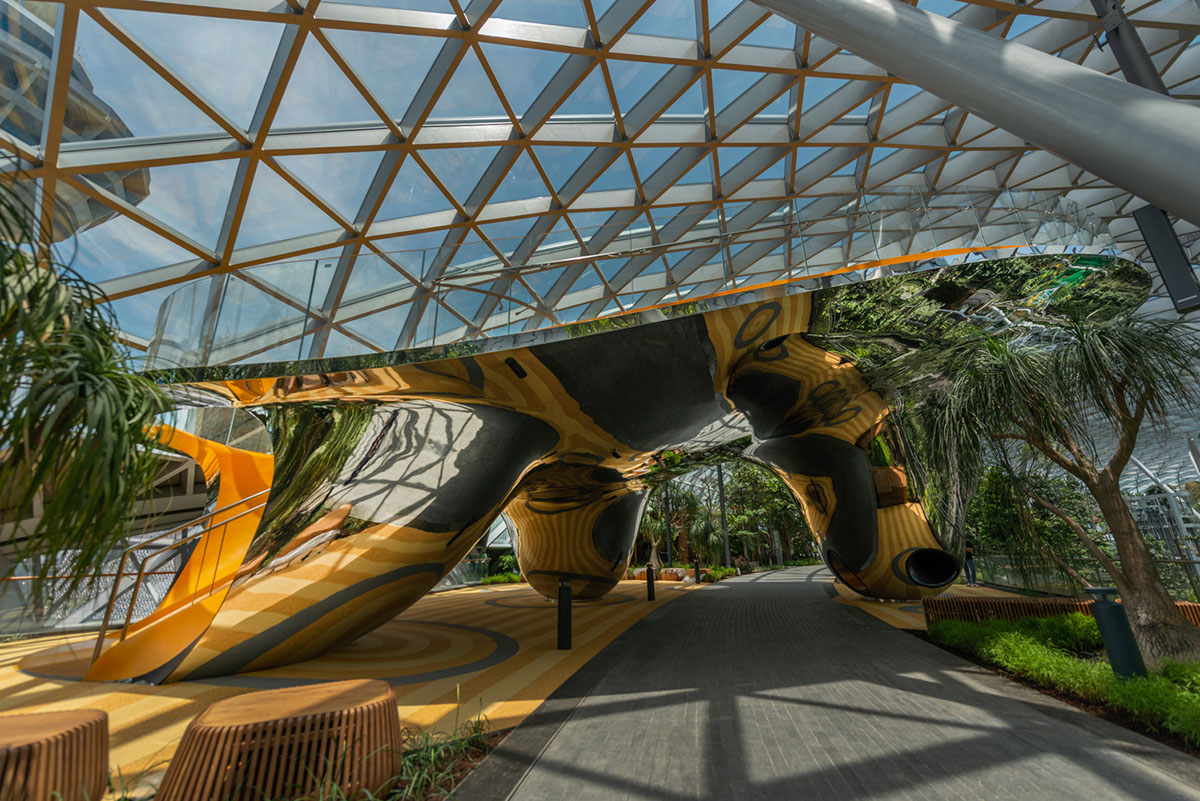 Jewel is slated to receive Singapore’s GreenMark Platinum status. The building’s efficient displacement ventilation system regulates the thermal comfort for occupants as well as the vast array of interior planting within.

Safdie Architects' Raffles City Chongqing, linking the four tower, is also under construction in Chongqing, China and the main structure of the building has started to appear.