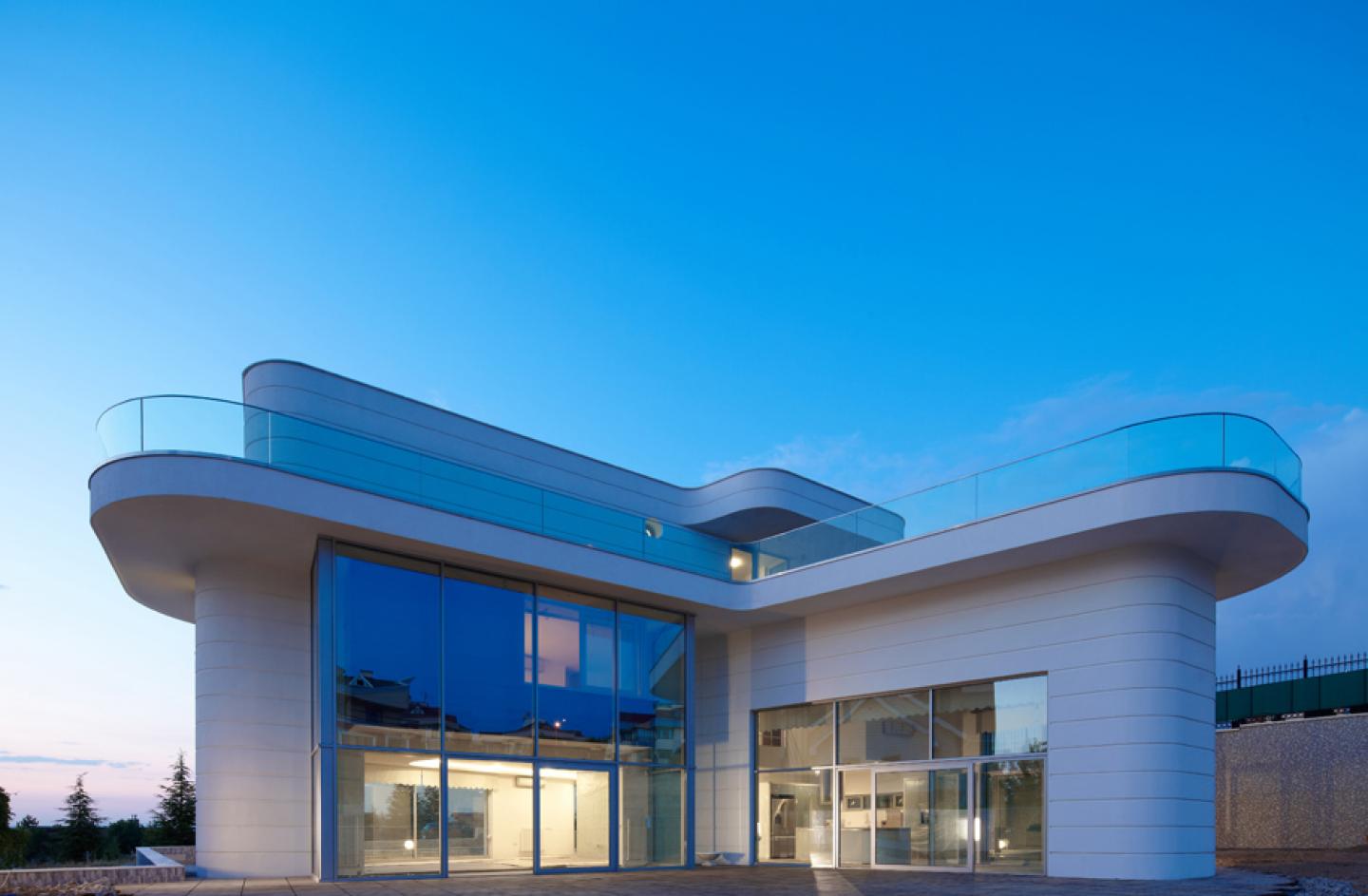 Located in the Ümitköy region of Ankara, Turkey, White House is a four-story, 800 m² private villa designed for a large family. The design program was developed through a close collaboration between the architect and client. The spaces found within the villa: entrance, foyer, living room, kitchen, dining room, master bedroom, study, children’s rooms, storage room, fitness room, and garage, were separated as singular elements and arranged based on measurement requirements and relationship to a central focal point. Per the request of the client, the connections between these spaces were established through a central core comprised of two modes of vertical circulation consisting of a staircase and elevator. During the design phase, each spatial unit was established and considered individually, developed into programmatic arms through the relationship with the central core, and collected as a whole with the envelopment of the façade.

Instead of having a typical adjacent relationship, each room establishes its association to one another through the center. One of the advantages of this centrality based scheme is that each room is able to gain natural light from two directions. The second advantage is the positive spaces created in the exterior. While each arm containing the interior elements maintains flexibility in regards to length and width, in response to this, the exterior spaces change as well. Thus creating a sense of a ‘push and pull’ dynamic relationship of the interior and exterior. By placing the circulation core in the center of the scheme, there is also a minimal amount of space lost. Along with a structural core in the center containing the staircase and elevator, the structural support system is distributed throughout the perimeter walls of the house thus opening up the interior and creating free open spaces. While the exterior is painted in the color that gave its name to the villa, reflective materials are used in the extensions and terrace level.

The relationship of a programmatic unit to the center is established both in plan and in section. The rotation of a systematic section from the center creates the overall design concept for the villa. In response to the functional separation of rooms, a sense of unity is created through a collective envelope, allowing for visual and physical networks between spaces. The connections between spaces differ in a sense that while some flow into each other, some rooms completely separated. This flexibility allows the spaces to be shaped based on requests of the clients. Thus there is a co-existence of flowing spaces and separated spaces within the same system, which at any moment has the ability to interchange. In order to add an extra element of flexibility to the arms, several additional programmatic elements such as a greenhouse, sitting niche, bathrooms, and a walk-in closet are attached to spaces.

The whole system is collected vertically between a large terrace on the top floor and a wooden veranda on the ground floor. The overall landscape design is distinctly divided into a circular hardscape and vegetated landscape. The systematic section that establishes the programmatic distribution of spaces also finds its place in determining the landscape design within the site. In order to create a large veranda between the living room and dining room, the central focal point of the design is shifted in the north-east direction. This move also allows for the extension of the arm containing the living room and master bedroom to extend to the perimeter of the circular veranda. The shift in the central focal point creates a delicate balance of small, medium, and large spaces that ebb and flow while maintaining a visual relationship with the exterior landscape, ultimately finding their place in the overall design of the villa and its surroundings.