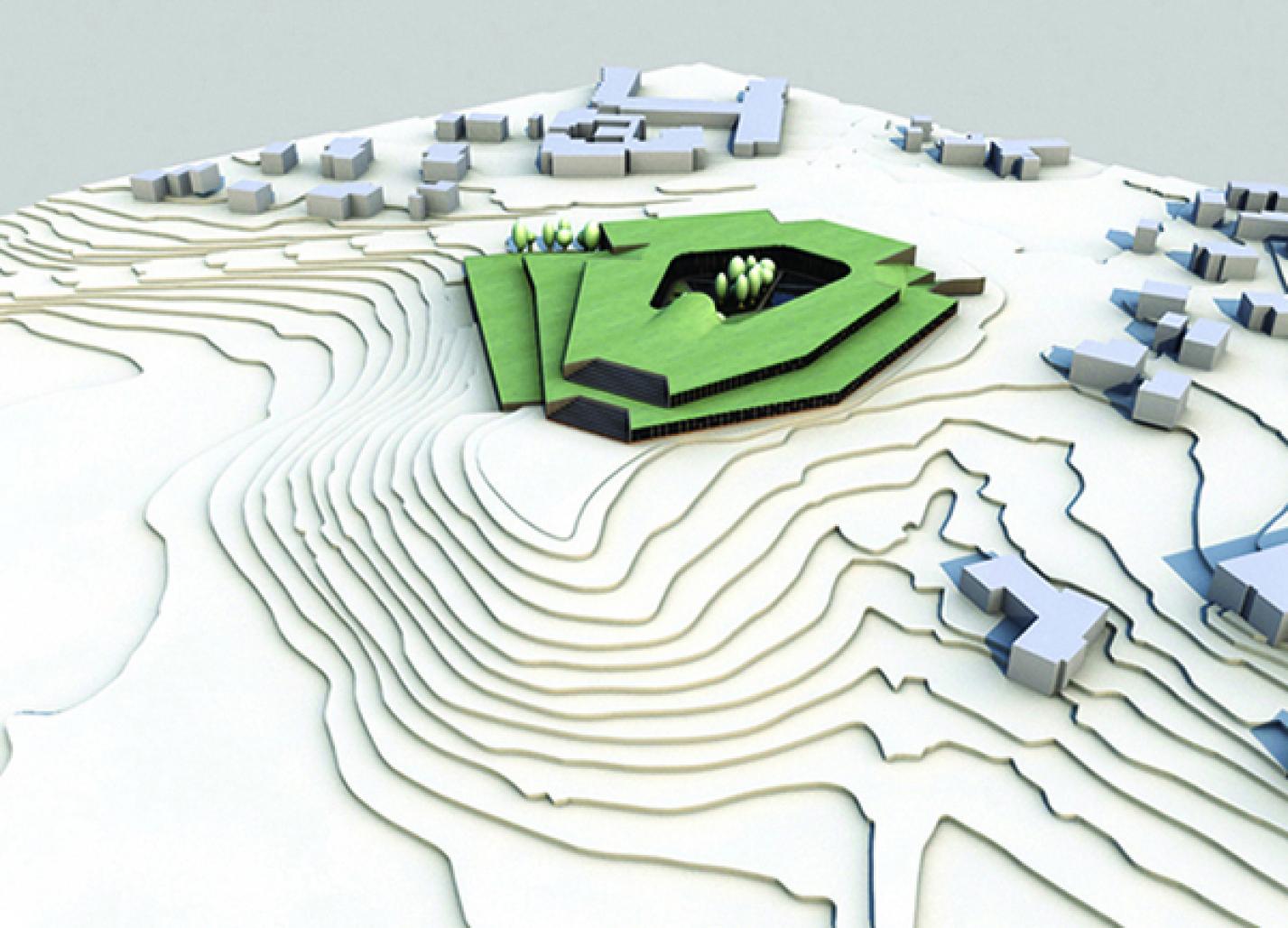 MOTTO: Learning from the park

The planning purposes the creation of an architecture closer to the nature, reducing anthropic activities impacts on the climate.
It is an idea directed towards testing the intervention on the surrounding environment so that it could be inserted and camouflaging integrated with the other buildings interested on a large scale to the project, such as the Health Hospital (Helsepark) and the sport center located in the Holmen area.
This type of planning respects mystically the environment and its implementation is divided into series of project tricks, which modify as little as possible the natural skyline, contaning energy wastes and reducing carbon dioxide emission.

The fondamental point of beginning for the concept planning was the analysis of the orographic situation of the project area, linked to the awareness of geographical orientation, climate and of those relevant elements of the relatively next context.
It has been moulded an architectural shape which reproduces the orography, without falling into pure natural formalism.
The purpose is precisely to reproduce through architectural languages an idea of natural environment like the hill ones, through the use of wood and roof garden system, which, in the last few years, is more and more adopted in bioarchitecture.
In architectural terms, the complex has been conceived with a series of glazed grass-covered terraces, maintaining continuity with the surrounding park, for thermic reason.
Those windows are punctuated by the surrounding rhythm of the carrying skeleton structure of wooden pillars of a typical local essence and are oriented towards the natural landscape and almost southerly, so that pick up the dim sunbeams to turn them into heat energy, which contributes to minimize the use of non-renewable sources.
In particular to the south on the clearing of headland there’s a greenhouse, which acts as heat generator, whose coverage of tier will be used as cavea of an open-air theatre.
So it recovers morphologically the pattern of the greek open-air theatre, surmounted by the hill and overlooking the landscape as far as the eye can see, which, in our istance, is Mt. Tron, 1660 metres high.


From the planimetric point of view, the building consists of concentric bands with distinct functions: in the peripheric areas there are classrooms and laboratories divided for didactic areas, which profit by chromatic decongestant influence of the front green roof; in the building core there is a wide garden containing internally natural elements, such as trees, sheet of water and landscape furniture’s elements.
In particular, the general planimetric design of the garden follows projection shadows on the ground in the space of a day and it exploits sunbeams, which irradiate the north surface for the most of the day. So grass lawns at lower areas and water mirrors reflecting sunbeams at upper ones have planned. Trees, instead, create a pleasant microclimate and, at the same time, filter sunbeams because they are a deciduous species.
The library, which is distinguished as the most public and hierarchically important fruition place, is located in a privileged position, exalted by the cover with the emergent section and which acts as sundial.

At the time of the approving executive project, the concentric composition of the plan and the didactic sectorization let start its fulfillment in three different temporal phases: the first step consists of the restructuring of the existent building (theory-block) and the southwest classrooms realization; afterwards it carries on with greenhouse-theatre, library and southwest classrooms series building; in the end the auditorium, internal and external green areas will be built.

In regard to accessibility organization, it has been decided on keeping the school main entrance on the council way, from where it’s visually distinguishable the internal direct access and the pedestrian climb level with<