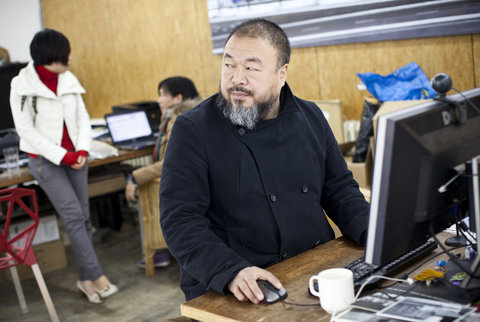 Shiho Fukada for The New York Times/Ai Weiwei at his studio in Beijing in 2011.

The name and works of Ai Weiwei have been removed from a show in Shanghai about the history of Chinese contemporary art because of pressure from local government cultural officials, according to Mr. Ai and Uli Sigg, a Swiss art collector who helped organize the exhibition. Mr. Ai said he thought the move was in response to his vocal criticism of the Chinese government.

The exhibition, “15 Years Chinese Contemporary Art Award,” chronicles the history of the art prize that Mr. Sigg, a former Swiss ambassador to China, created in 1998 to help foster the Chinese art scene. It includes about 50 works from more than a dozen award winners.

Mr. Ai won the award for lifetime contribution in 2008 and served on the jury the first three times the awards were granted. Two of his works, a wooden stool and porcelain sunflower seeds, were to be included in the show at the Power Station of Art, Mr. Ai said.

The state-owned museum negotiated with cultural officials over whether Mr. Ai’s works could be included, Mr. Sigg said. A few days before the April 26 opening, Mr. Sigg said, he was told that they could not.

“We were not really a party to this,” Mr. Sigg said. “In the end it was the Power Station and the cultural bureau. In the end we said we must accept. We don’t understand but we must accept that his works will not be in there.”

Mr. Ai posted a photo on his Instagram account of two taped boxes that he said contained the seeds, which had been left in a museum office. Power Station of Art officials could not be reached for comment Tuesday evening.

Mr. Sigg said he was angered to learn minutes before the opening of the show that museum workers had removed Mr. Ai’s name from the lists of winners and jury members painted on a wall.

He said he had considered stopping the show, but without any way to negotiate with Shanghai Municipal Bureau of Culture officials and minutes to go before the start, he instead chose to register his complaints in his opening comments. His mention that one artist couldn’t be included was not translated, he said.

Mr. Ai said he believes he was targeted because of his political views. He has been an outspoken critic of the government on several issues including censorship and the death of schoolchildren in the 2008 Sichuan earthquake.

The Beijing-based artist also has had previous conflicts with Shanghai officials. In 2011 municipal officials ordered the demolition of a studio he had built in Shanghai, which he called retaliation for his activism.

Mr. Ai’s absence from the show comes as he has engaged in a separate dispute with the makers of a 10-minute science-fiction film shot in Beijing.

The artist said he was upset that he was given prominent billing in the film and that his name was used to promote a Kickstarter funding campaign for that movie, “The Sand Storm,” despite his small role as a smuggler. “I think they should not use my name to raise money and explain to the public that I’m not a main character,” he said.

The director of the film, Jason Wishnow, could not be reached Tuesday for comment. The film’s Kickstarter page now carries a message that says it is “the subject of an intellectual property dispute and is currently unavailable.”

Mr. Ai said in the two disputes he saw the distinct difference between his image in China and outside of the country.

“I’ve been very involved in Chinese contemporary art, one of the first to make a gallery, make a studio, make underground books,” he said. “And here my name is erased. On the other hand you have a movie done by a Western person, that I was not so involved in, and they use my name like this. It’s funny when you put these things together.”