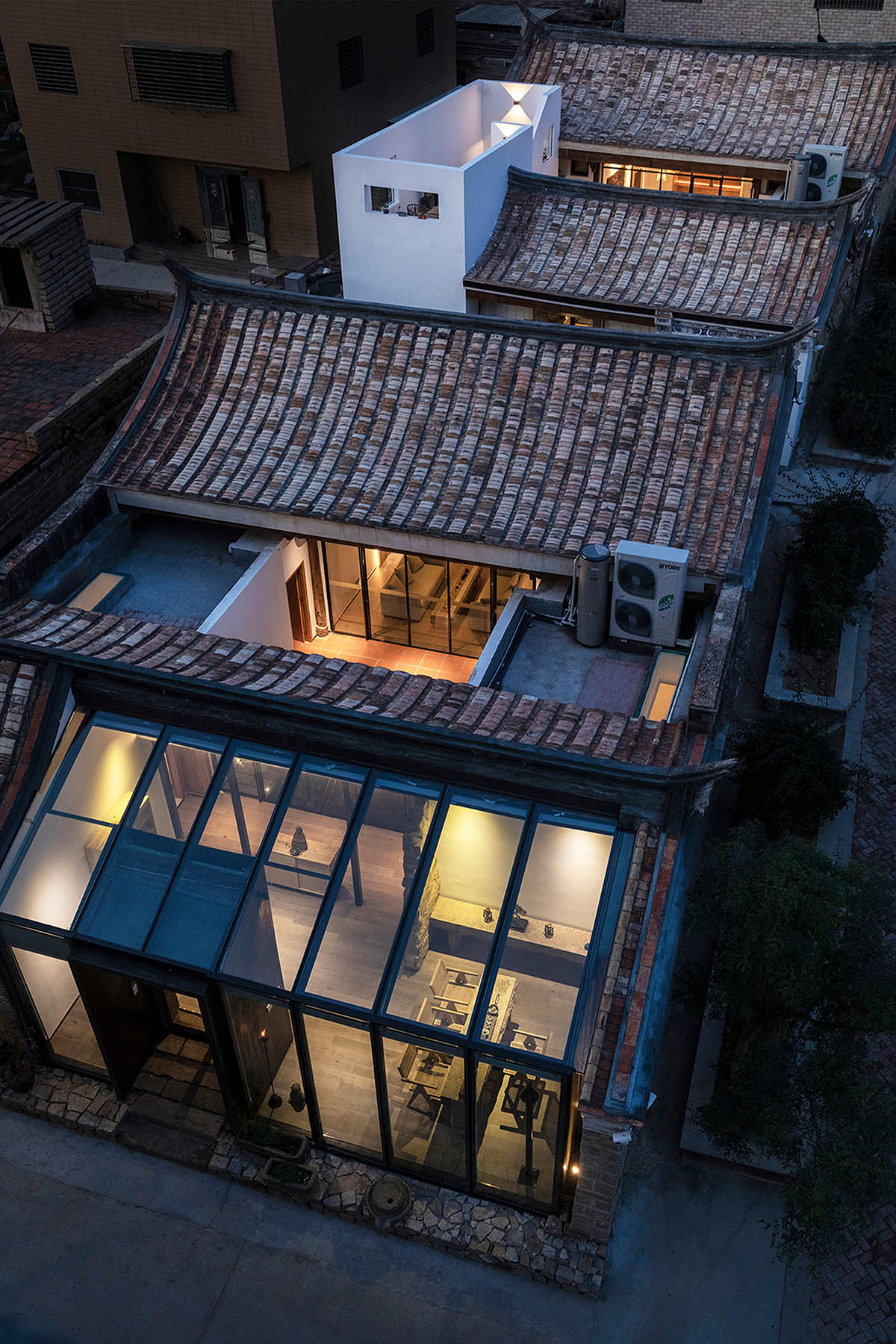 Southern Fujian, located on the southeast coast of China, is the beginning of the "Maritime Silk Road" in history, and has been an important maritime transportation hub since ancient times. Convenient geographical location is conducive to business exchanges with many surrounding regions and countries, so it has accumulated a strong economic foundation and is deeply influenced by foreign cultures. Accordingly, Southern Fujian culture is a mix of traditional Chinese farming culture and foreign cultural influences. This rich and diverse cultural connotation is also fully reflected in its architecture, with very distinctive regional characteristics. 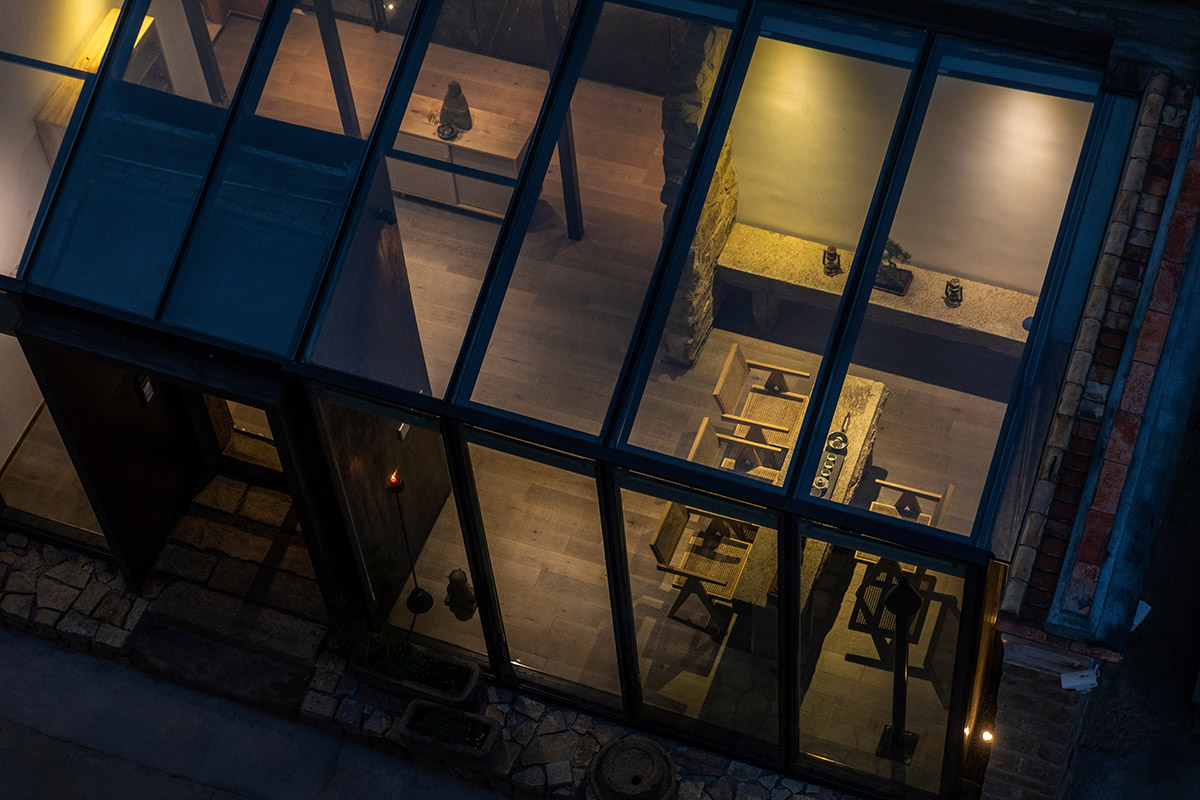 In response, the question of how to use traditional old buildings as carriers for retaining the rural memories of Southern Fujian, while reactivating its quaint villages through the power of design, has become a topic of time and locality. 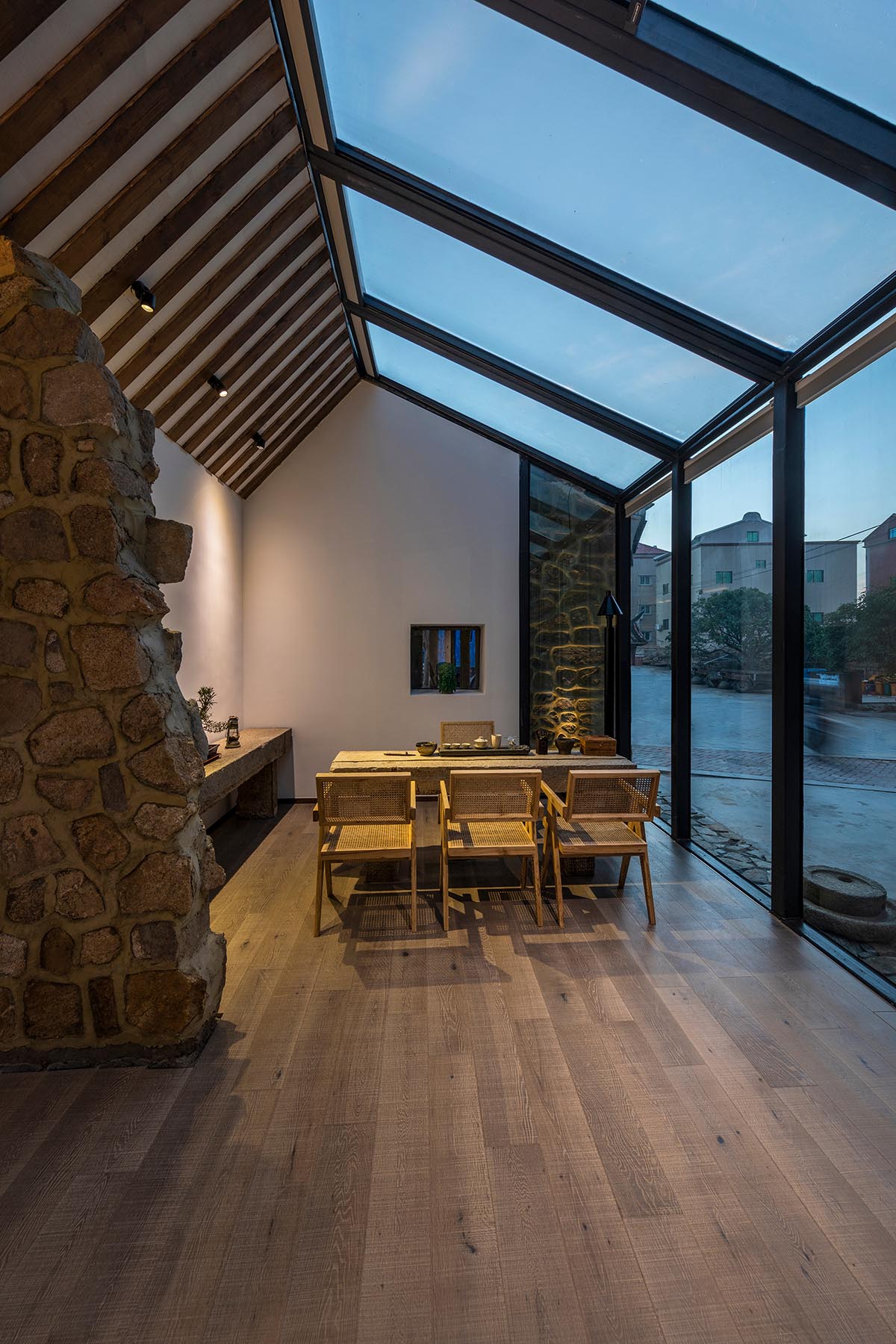 The tea table behind the stone wall. Image © AOGVISION

Xiangyu Xiangyuan B&B is composed of two parts, the old and the new. The old part is a traditional house with a century-old history that has been carefully transformed into the core space of the entire building. The new part is a contemporary architectural style composed of steel, glass, and brick. The new and old parts collide and blend, revealing the designer's thoughts on the transformation of rural old buildings and the regeneration of abandoned resources. 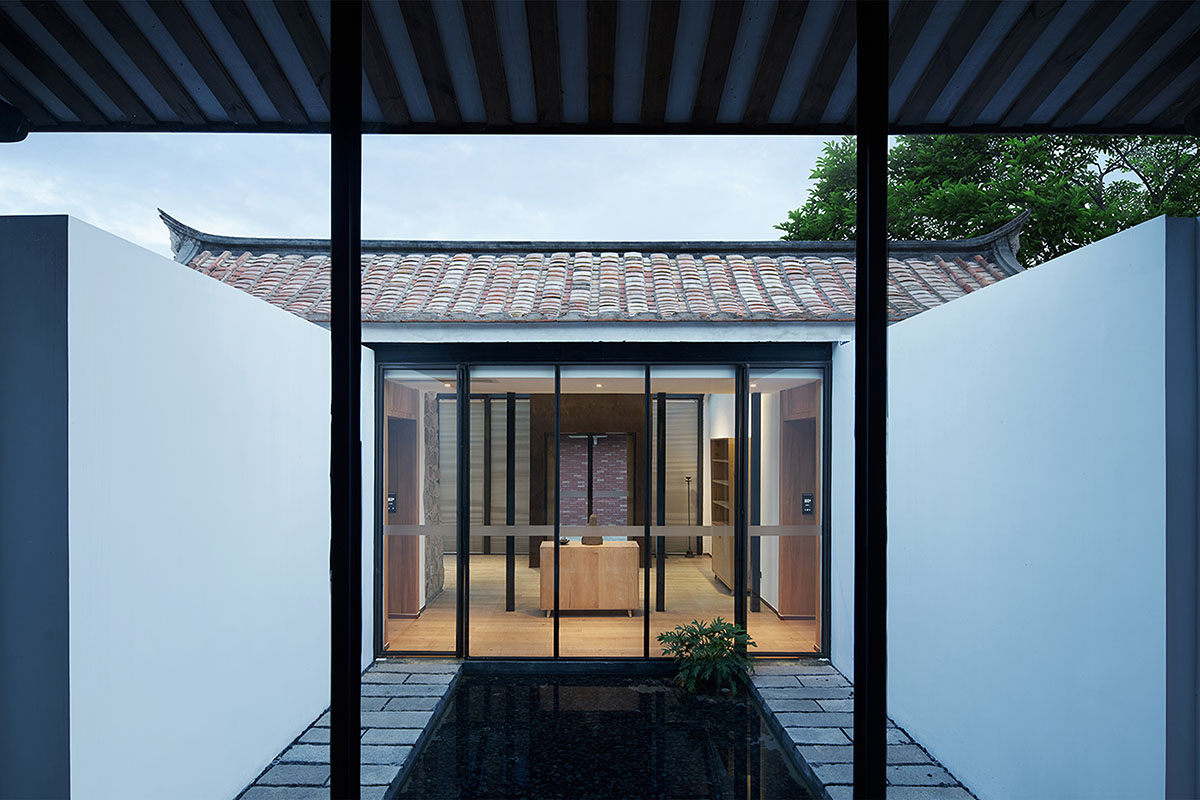 These traditional buildings are a typical representative of traditional dwellings in Southern Fujian. The main structures of the buildings are mostly Chinese traditional wooden frames, with building facades made of red bricks and red tiles, and “Yingshan” style roofs (a traditional Chinese building type for roofs). Both ends of the roof curve slightly upward, using light and flexible "swallowtail" methods. 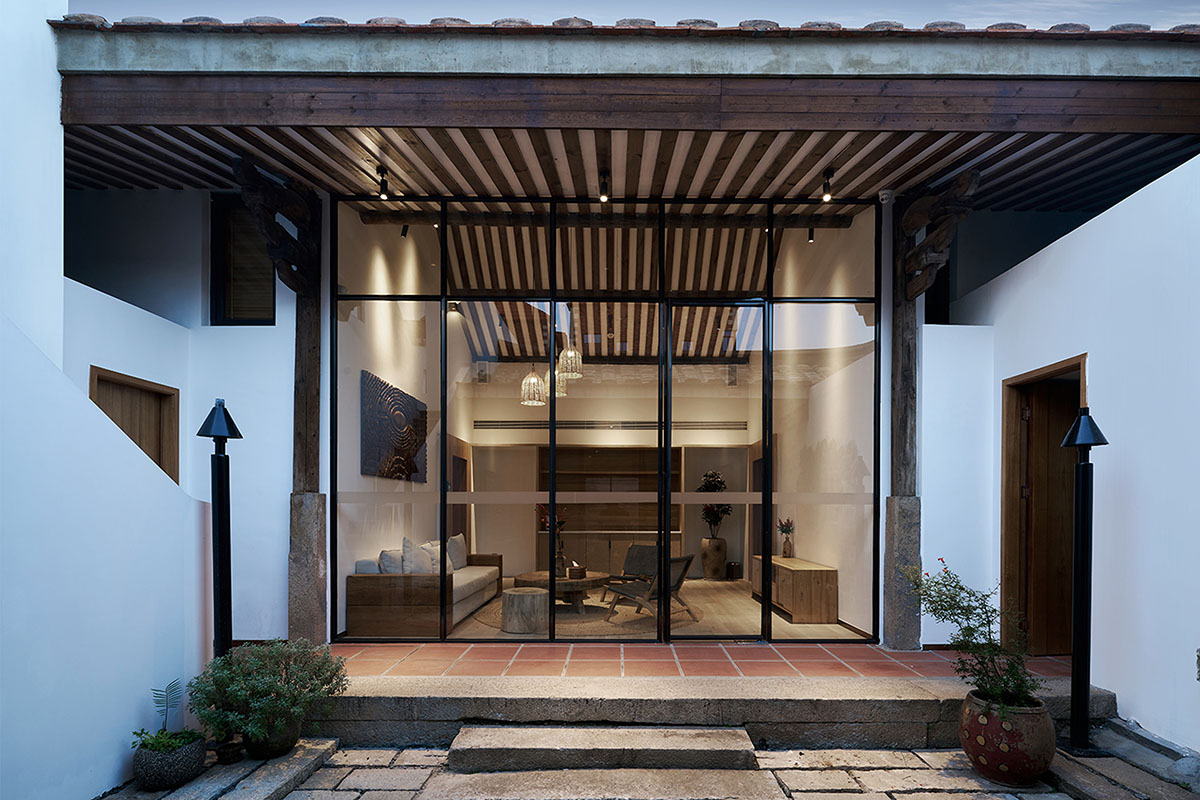 These original traditional buildings have collapsed to varying degrees. The collapsed part of building No. 1 is the first half of the building and the west side room of the atrium. The cornerstone on the west side is irregular. The designer uses a compromise design in the collapsed area.

A simple geometric building was built at the collapsed place to form a fusion with traditional architecture. The simple and pure geometry endows the old building with enough support and also highlights the readability of the traditional building. 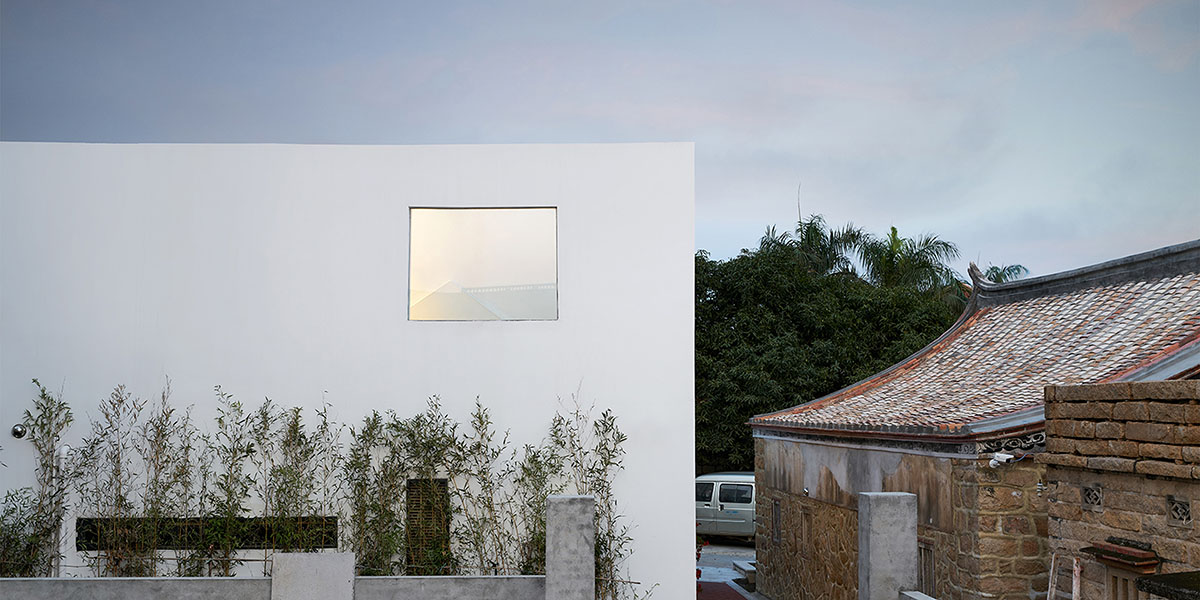 The collapsed location of building No. 2 is the hall and the front half of the kitchen. The original wooden roof frame is almost collapsed, and there is a nearly collapsed gate. The two side rooms in the middle have also collapsed.

The designer directly used steel structures in the hall and the left room to support the original wooden structure. The facade adopts a large area of floor-to-ceiling windows to meet the light quality requirements of the indoor space. The traditional roof is in sharp contrast with the transparent glass, which gives the traditional house a lighter expression. 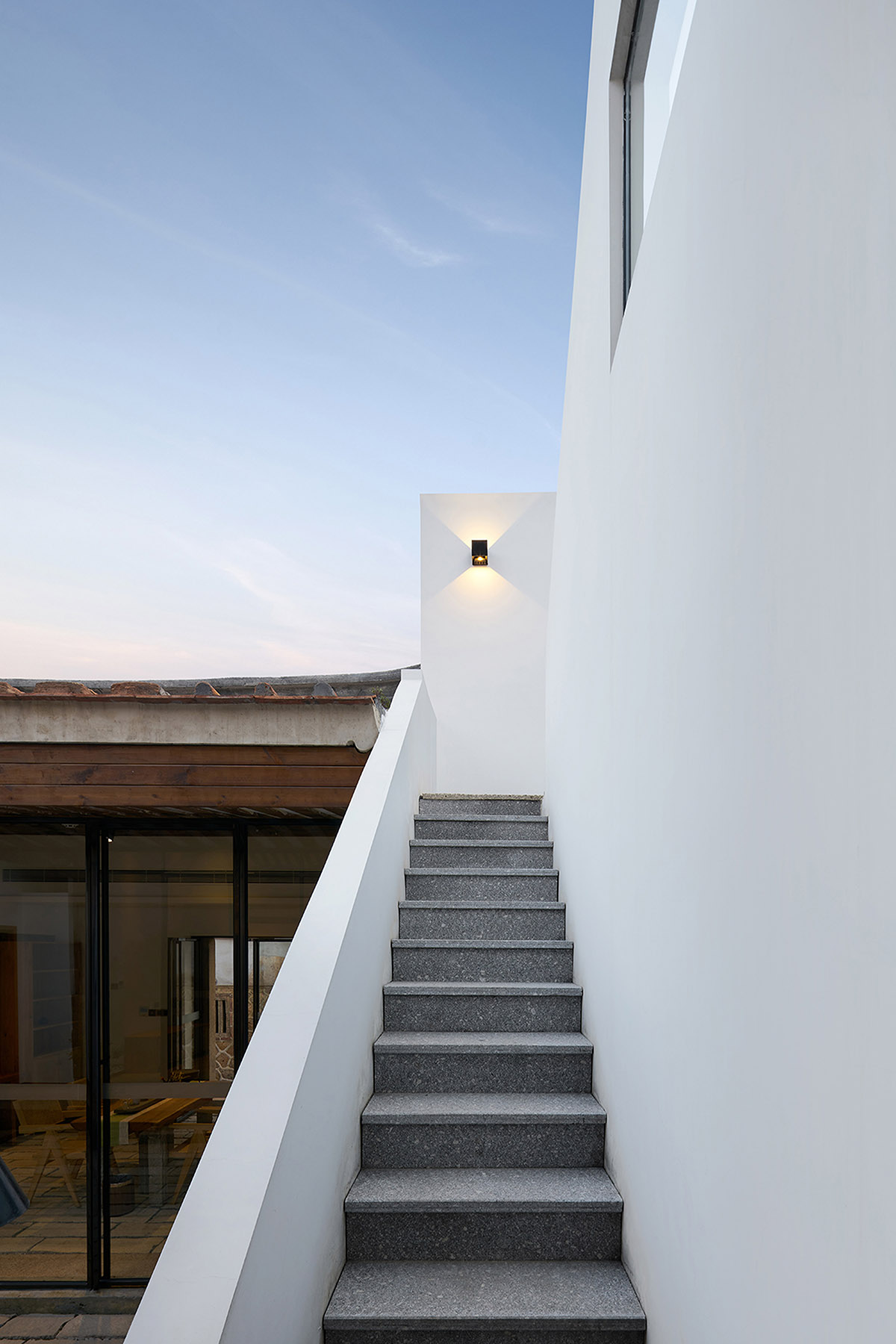 Building No. 3 is mainly constructed of strips and blocks of stone, so it is still very stable after a hundred years, revealing no particularly serious damage. It has been evaluated by professional organizations and meets the reliability requirements of current national standards, but it still needs to be reinforced to avoid future troubles.

To address that issue, the designer adopted an inner steel structure method for partial treatment and repair. In terms of interior design, the designer draws upon a modern interpretation of traditional Chinese architectural materials at the core, and carries out the interior design of three century-old buildings from the three directions of wood, stone, and porcelain. 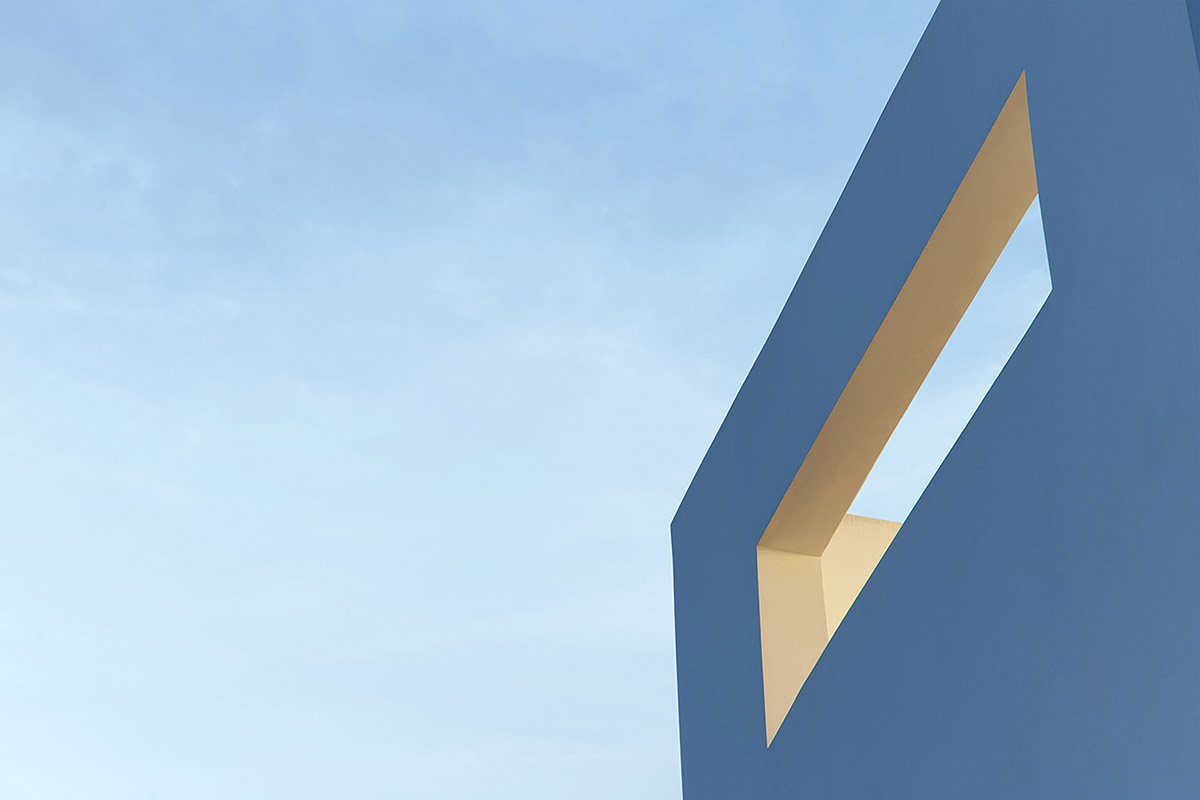 Wood, throughout the history of human construction, was a renewable material obtained from a wide range of sources. Wood is the most widely used material in the Xiangyu Xiangyuan B&B space for various presentations such as furniture, flooring, and installations.

It reflects the strong plasticity and artistic sense of wood, and it reflects the designer's sustainable design idea. As a natural construction material, stone has solid and natural characteristics. The overall space atmosphere of Xiangyu Xiangyuan B&B is highlighted through the redesign and application of stone. Porcelain is the most low-key material in the entire space, hidden within a modern form, expressing respect for the century-old buildings. 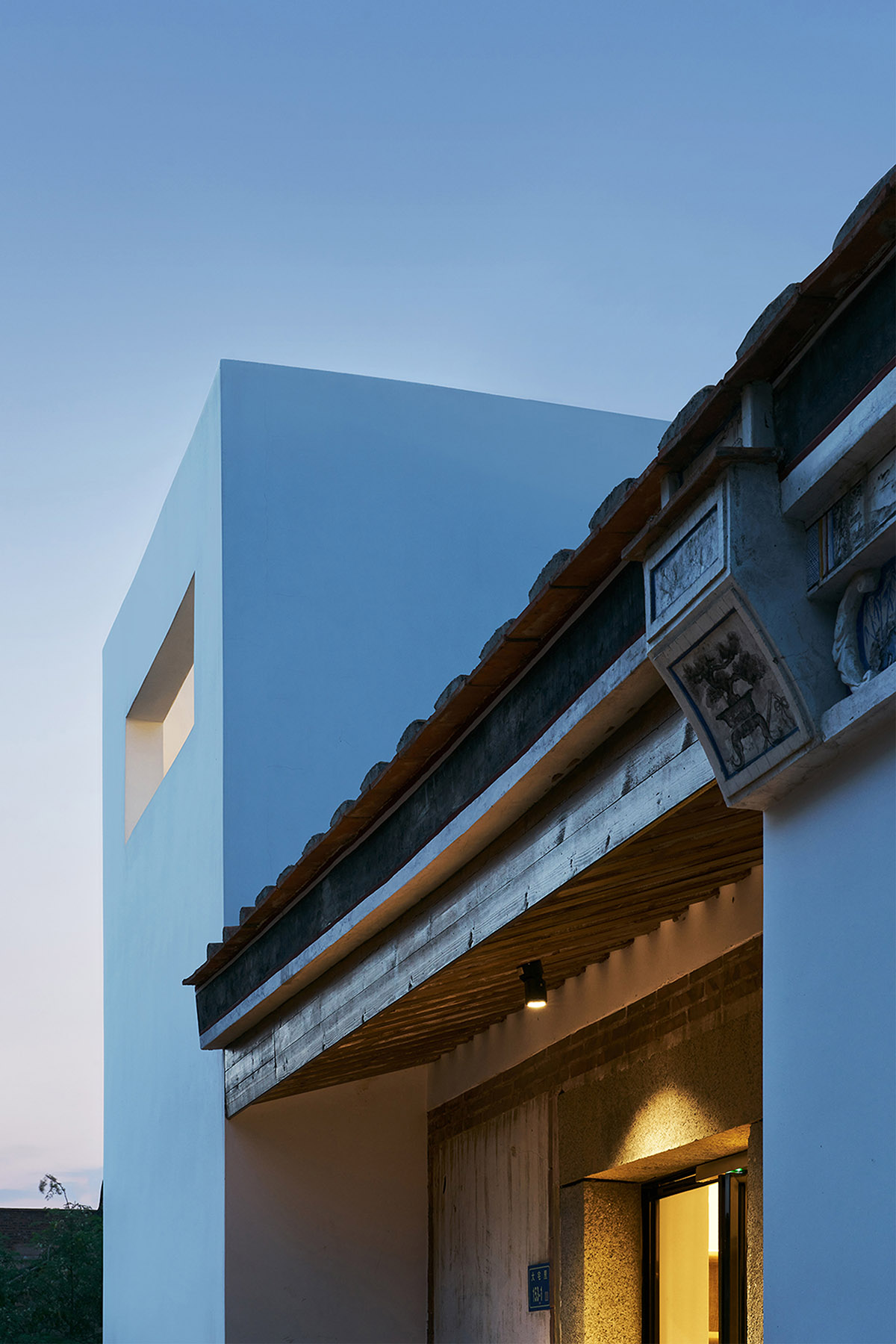 Whether it is architectural design or interior design, designers focus on traditional buildings, and modernize them through repairs and additions, and edit Southern Fujian traditional houses.

Let residents and foreign tourists experience the agile changes brought about by the design concept infused with contemporary sustainability, and further understand the Southern Fujian culture. 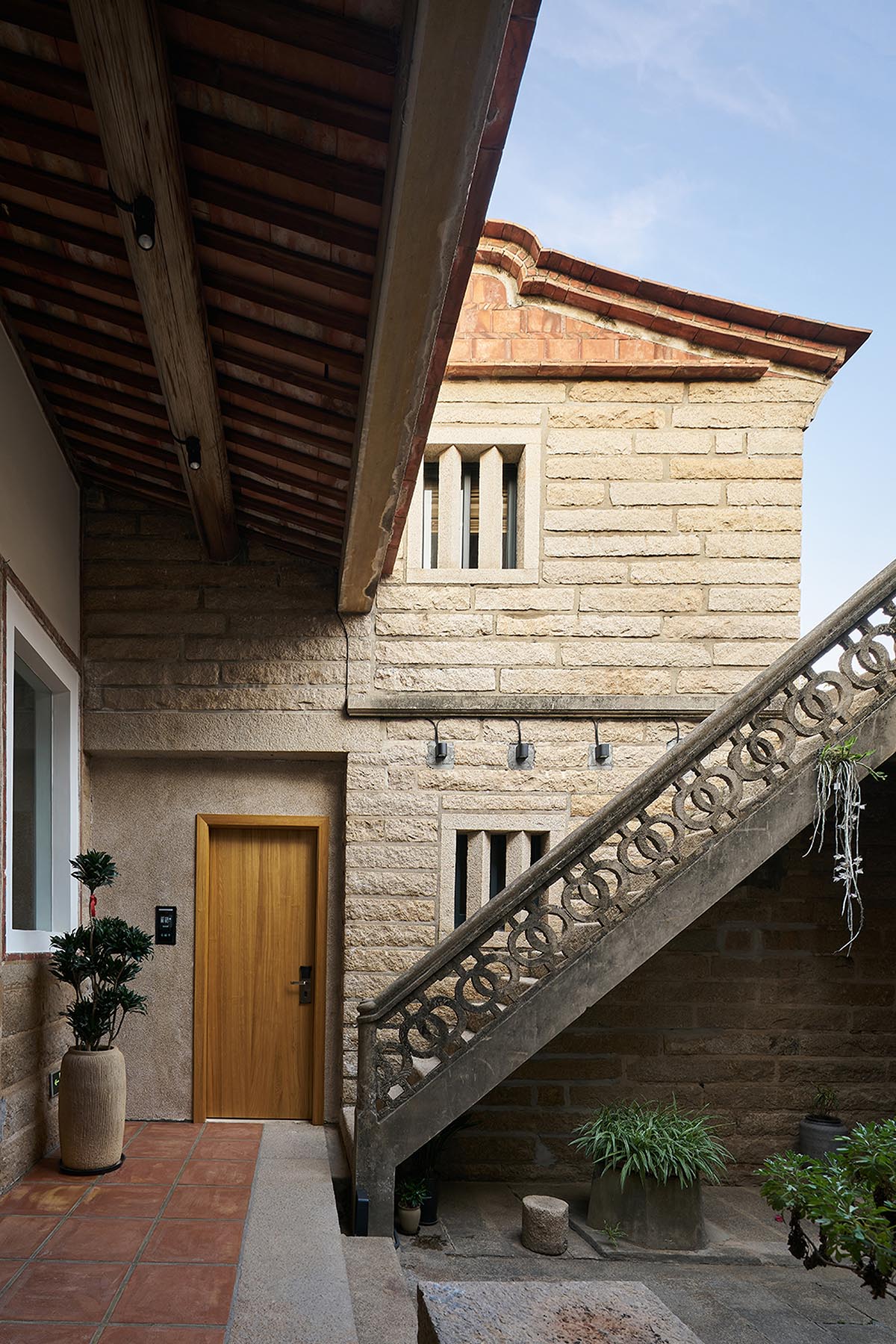 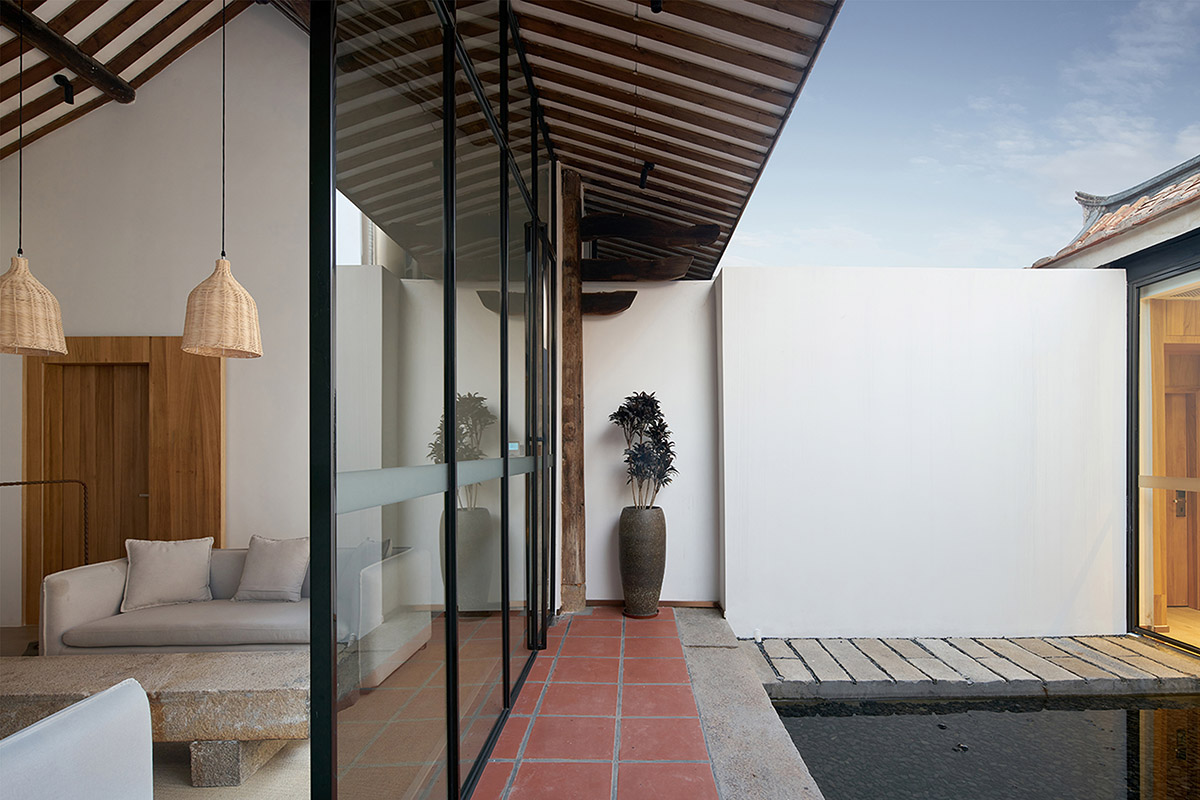 Between inside and outside. Image © k·bphoto 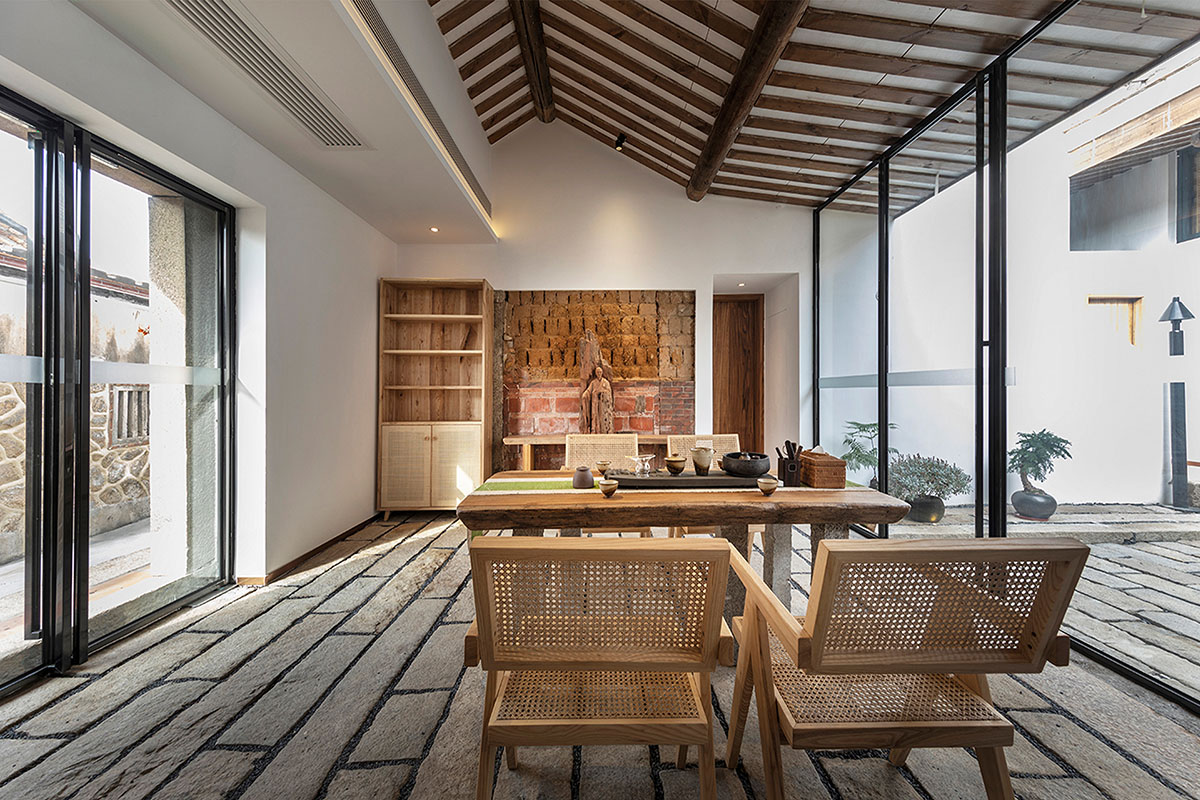 The reused stone is used as the floor. Image © k·bphoto 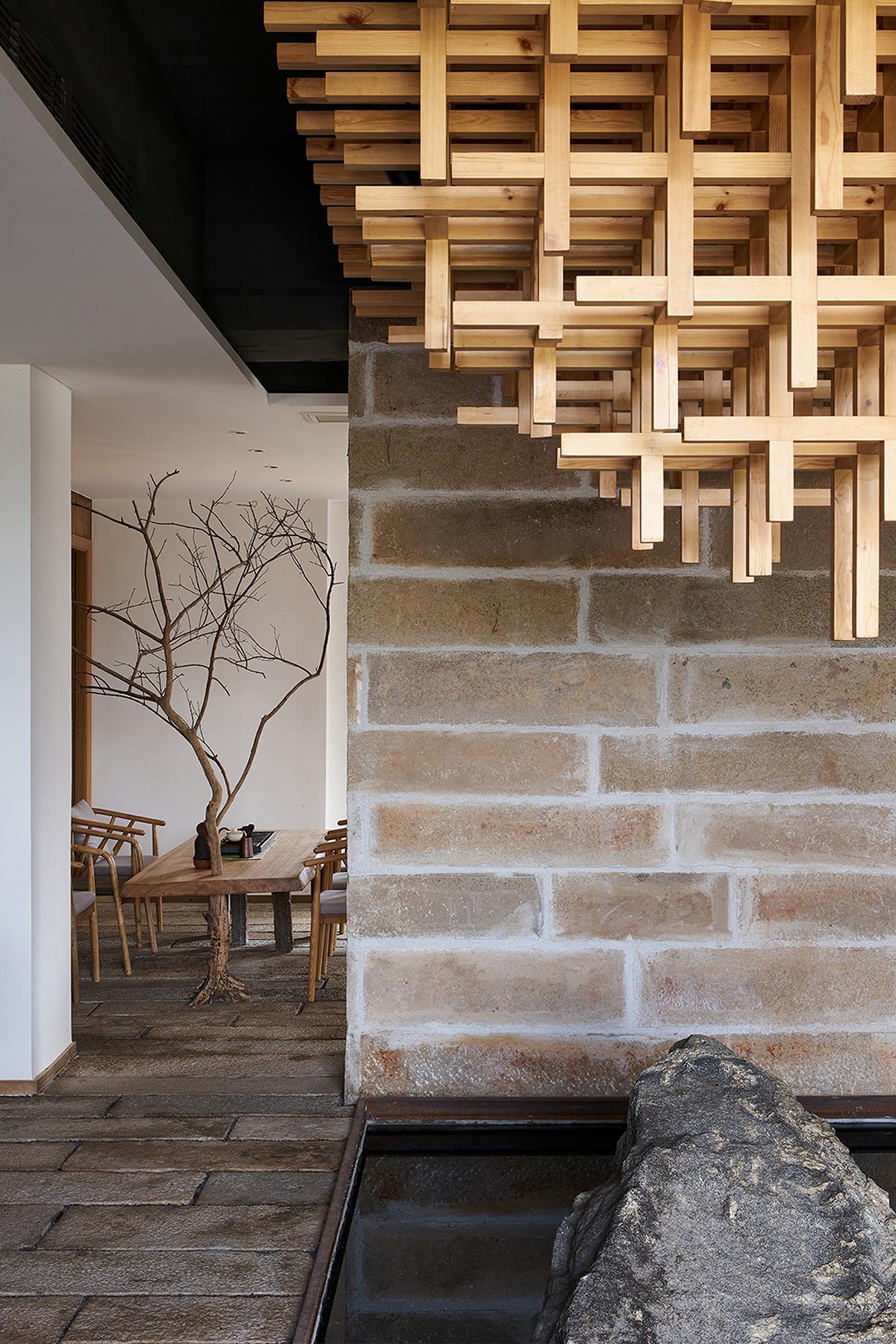 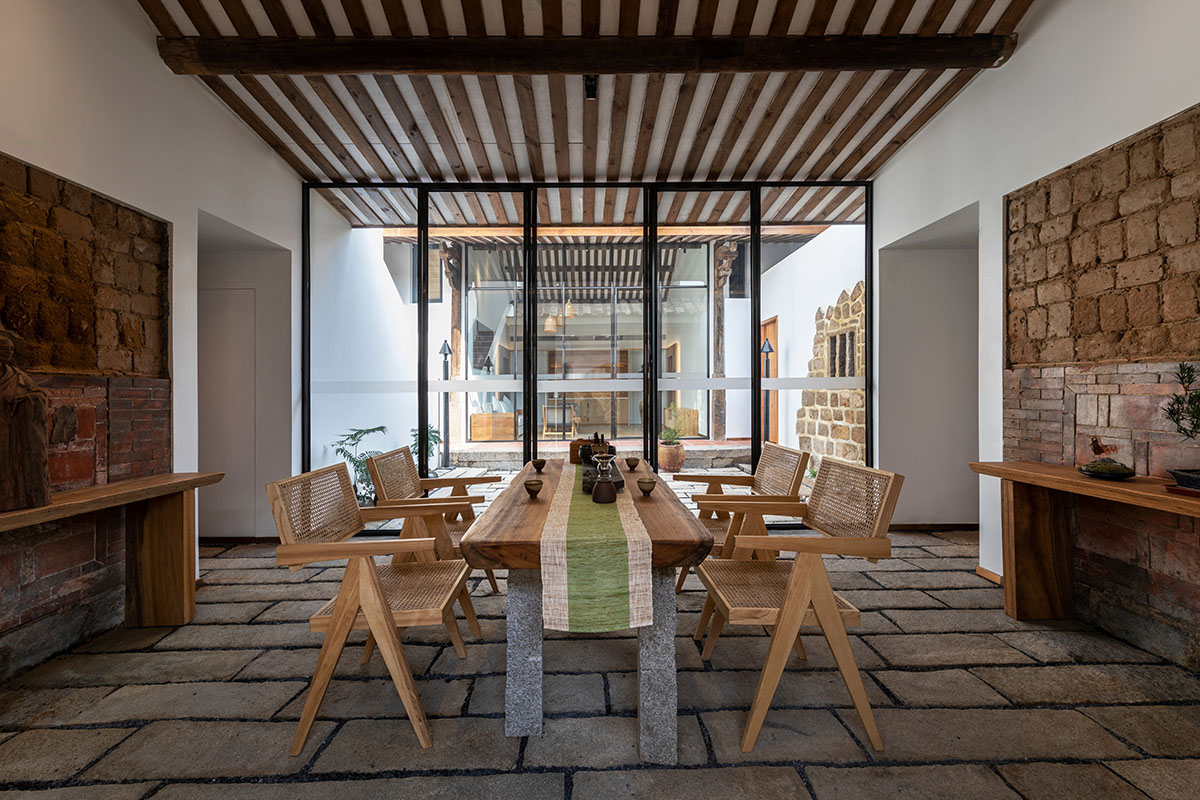 The stone bricks of the old building are embedded in the new wall. Image © AOGVISION 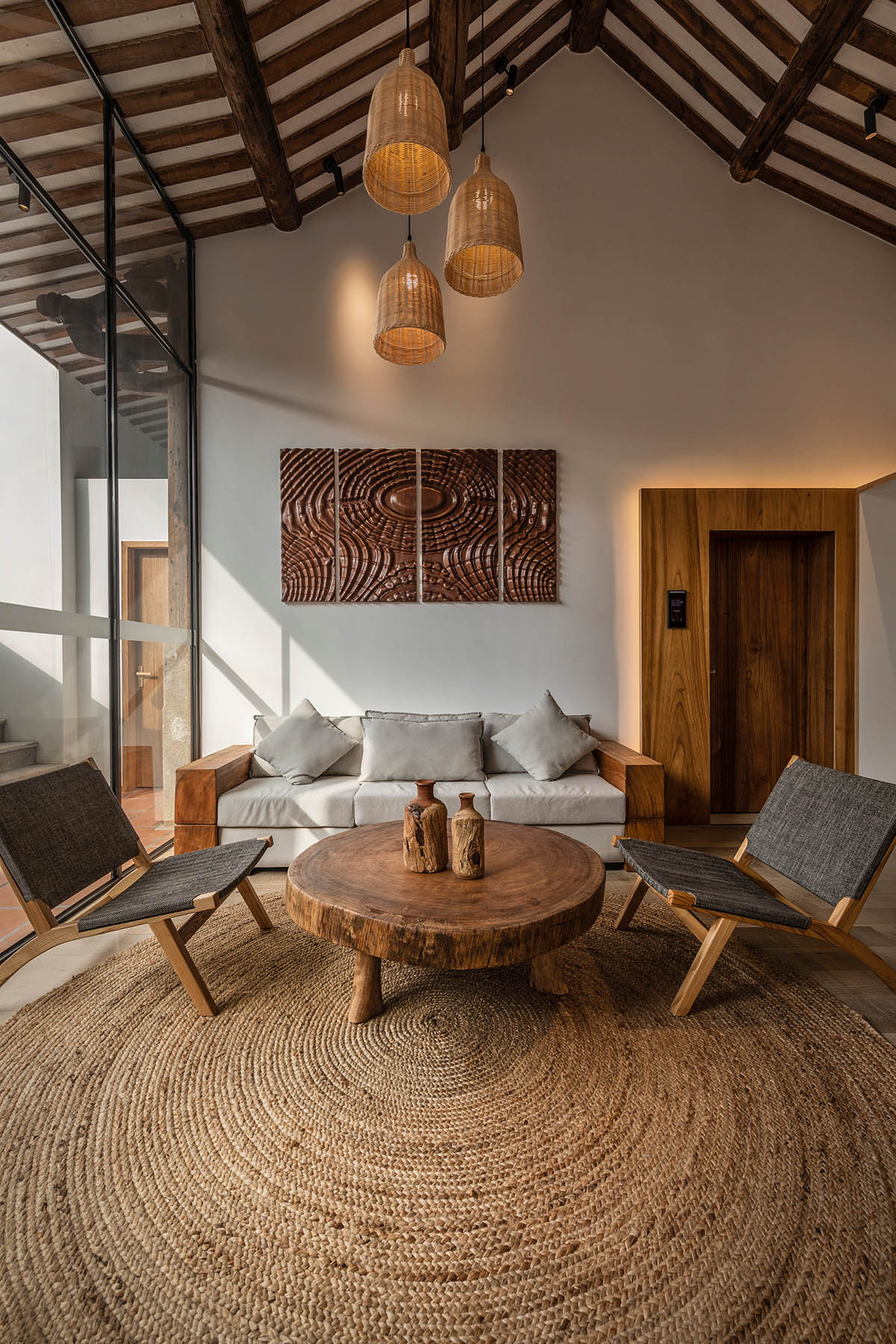 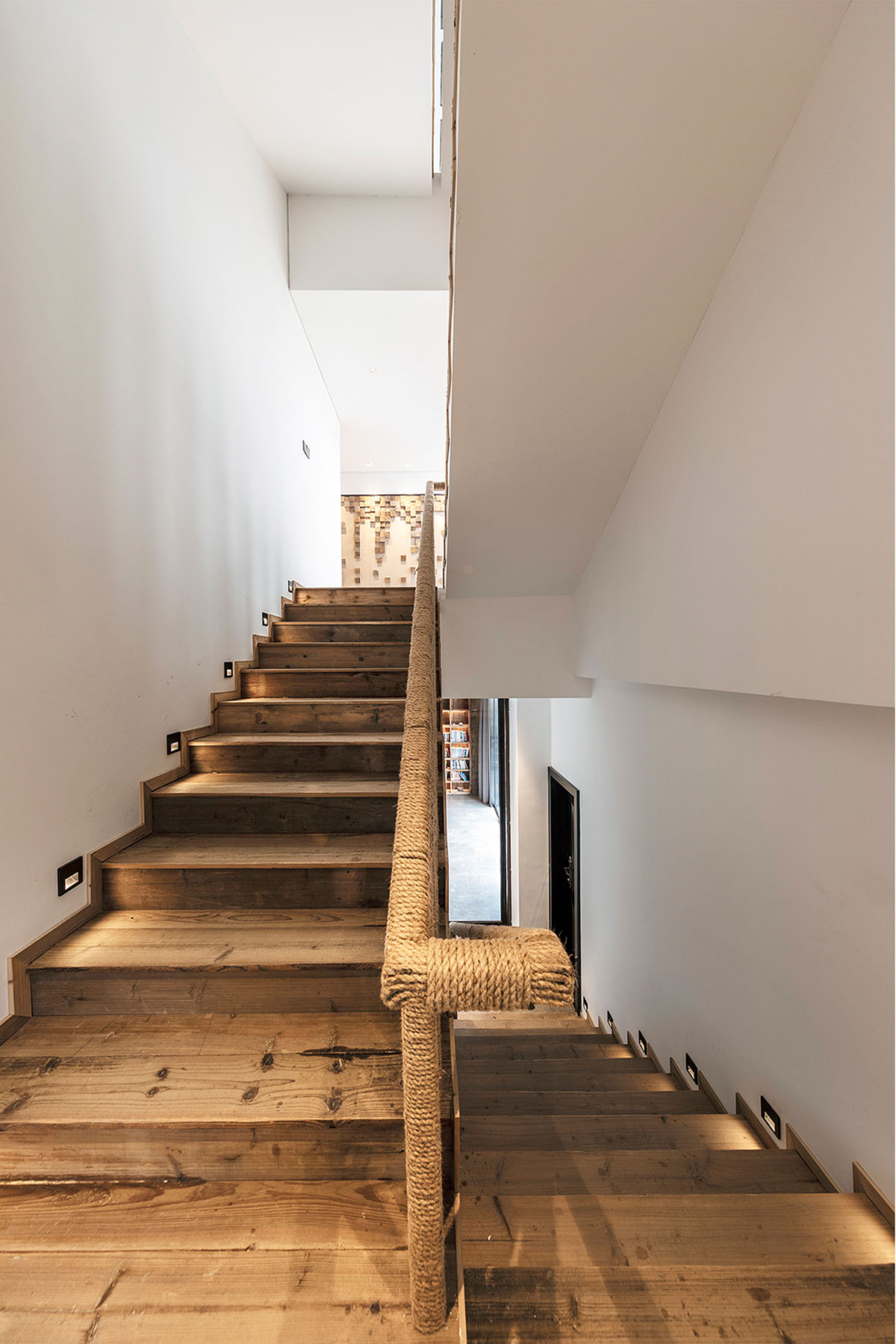 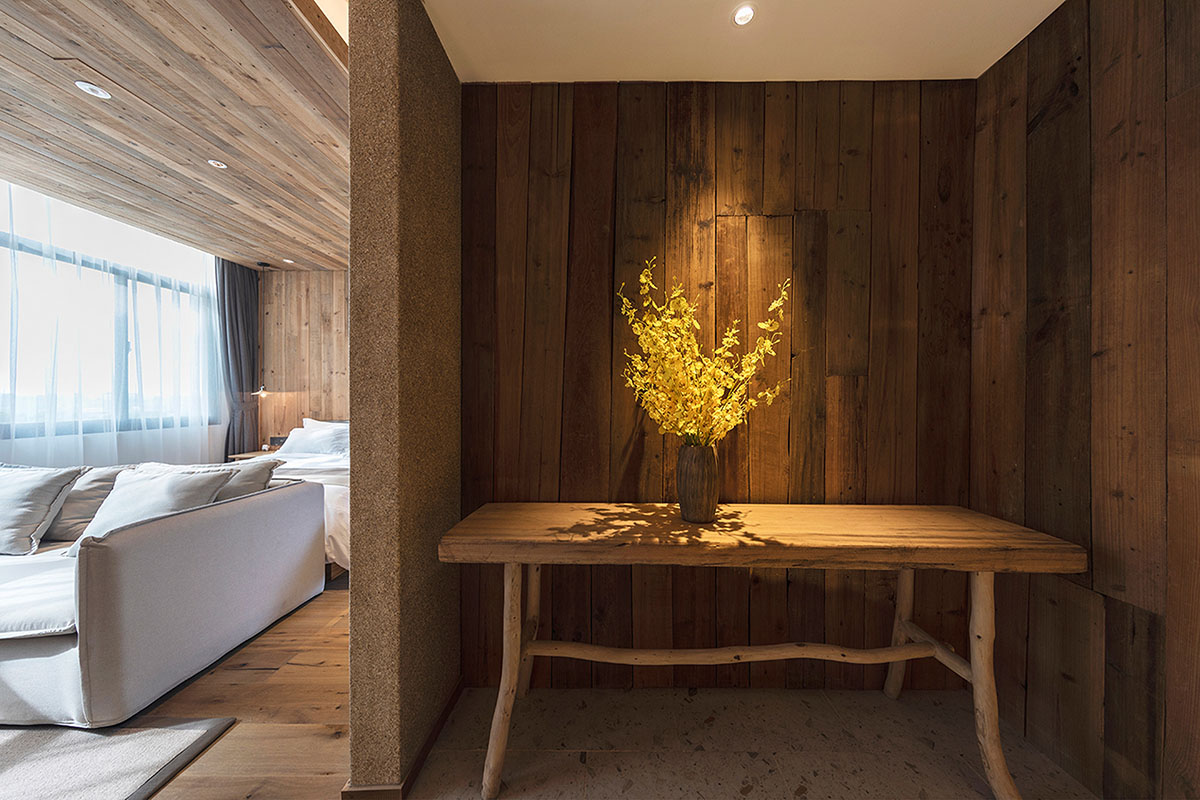 Old wood is made into wall panels. Image © k·bphoto 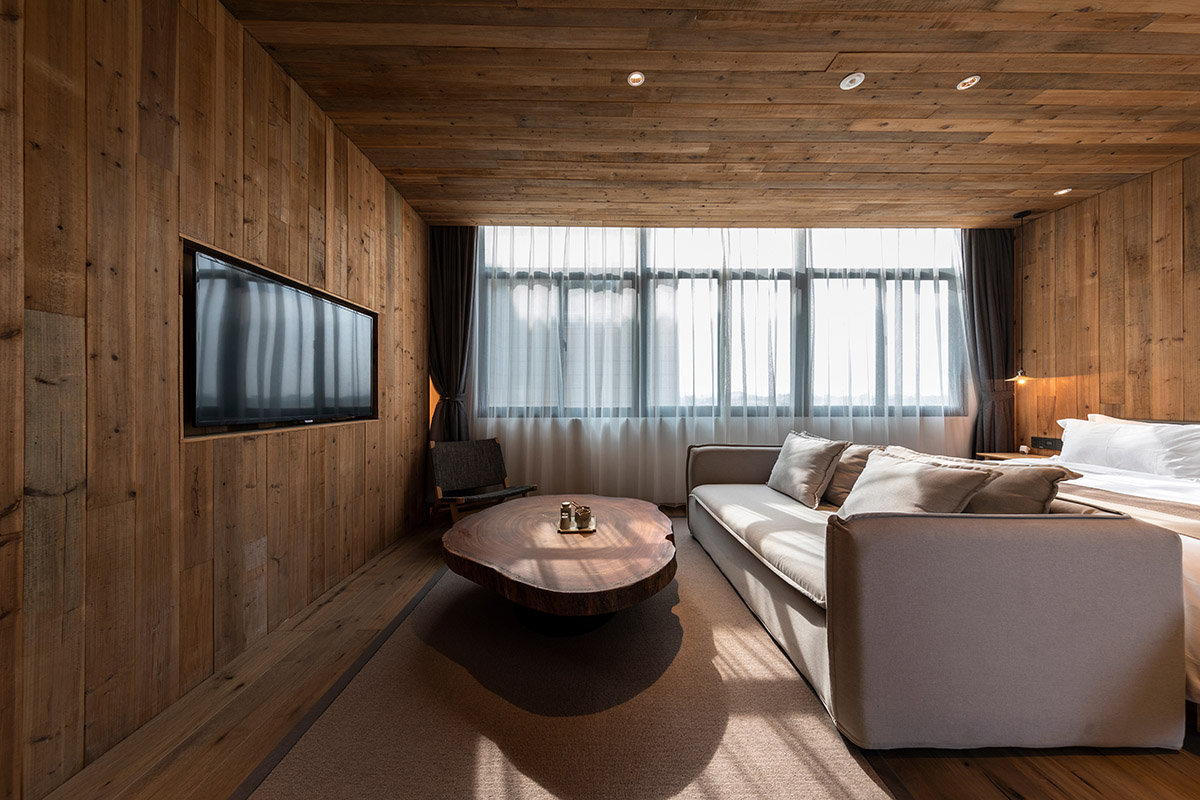 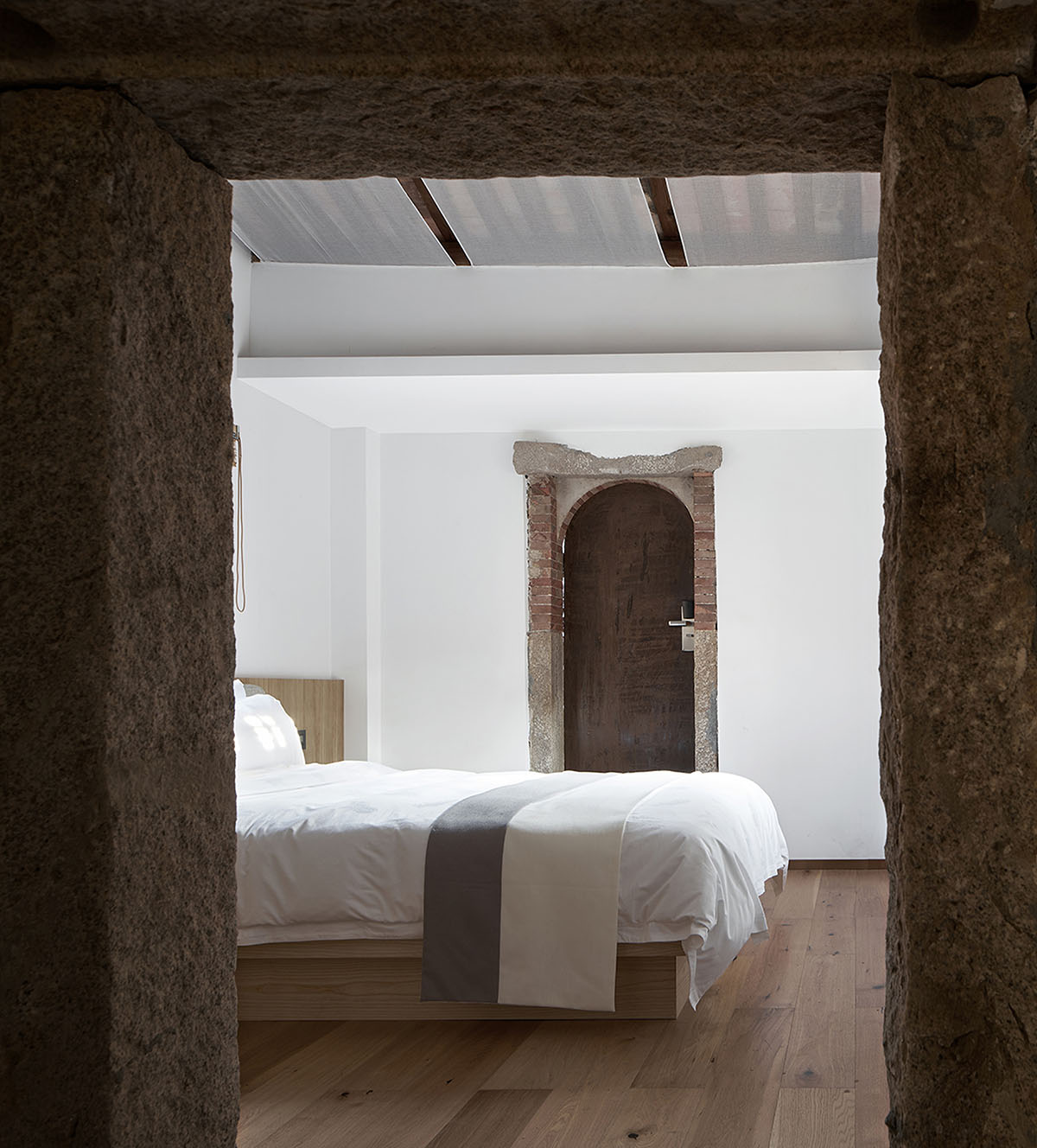