TACO converts small rural house into a restaurant on a corner plot in Mérida, Mexico 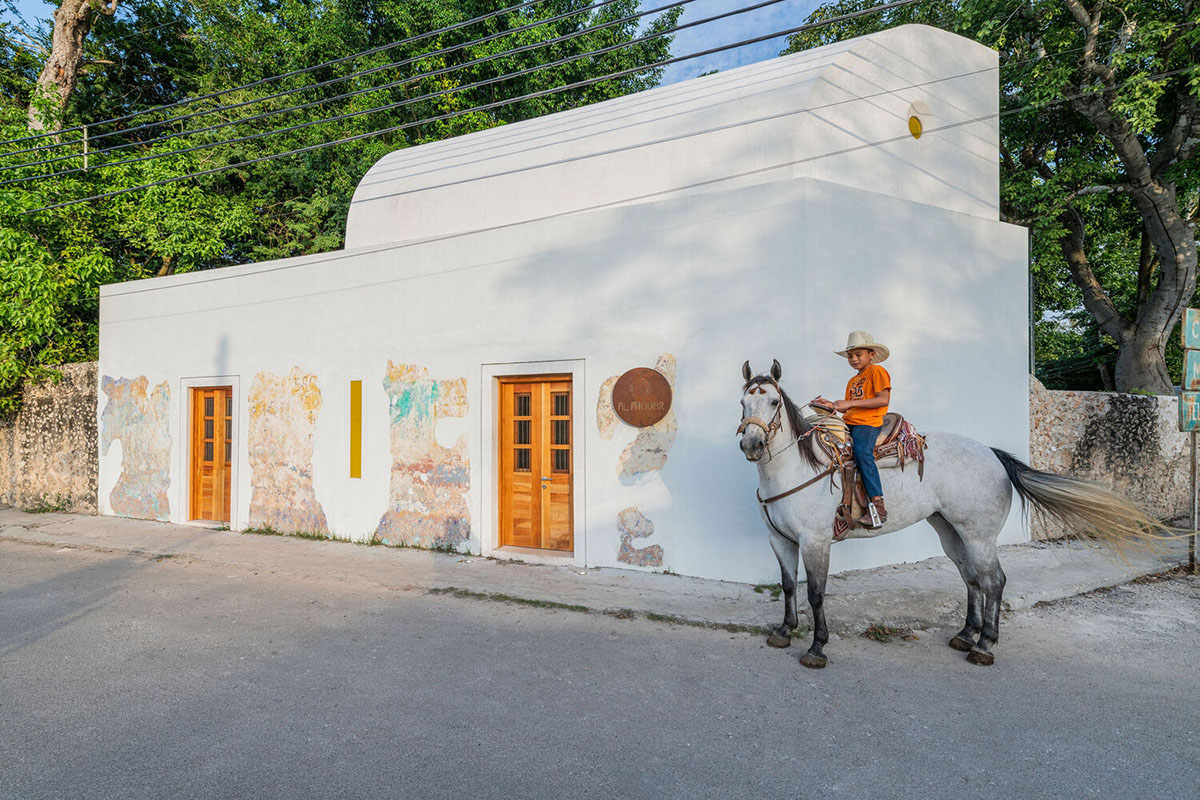 Mexican architecture firm TACO taller de arquitectura contextual has converted a small rural house into a restaurant and place that can serve for multi-use facilities for the local community in Mérida, Mexico.

Named Al Modar Founders Pavilion, the 75-square-metre building, which is also described as a pavilion, is located in one of the corners that contain the foundational square of Cholul, a community of pre-Hispanic origin belonging to the city of Mérida, southeast of Mexico. 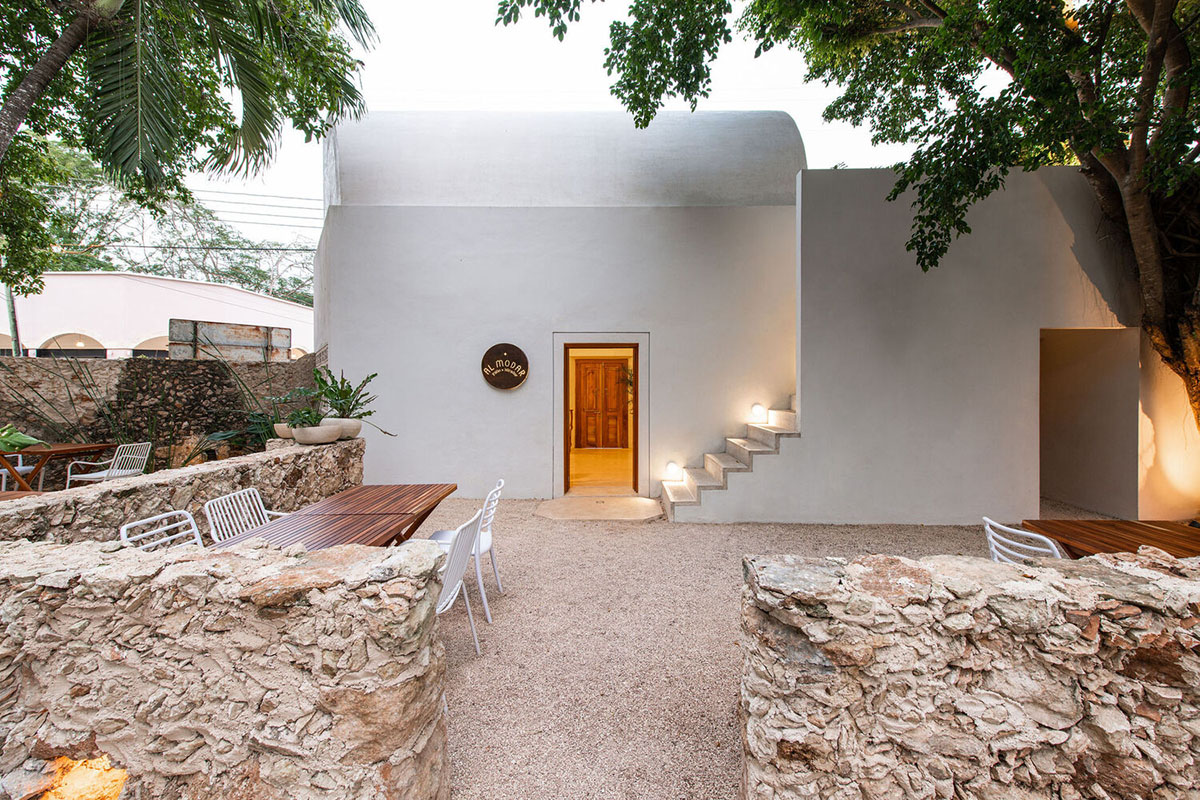 The goal of the project was to create "a casual, cool and relaxed meeting place where users could live a sensory experience through coffee, food, nature, the built environment and social interaction," as the studio highlighted.

"This received a modification 25 years before, in which the original roof and openings were lost."

The architects demolished the added covers and recovered the original structure of the stone masonry walls, which were prepared to support a double-height reinforced concrete barrel vault over the main access. 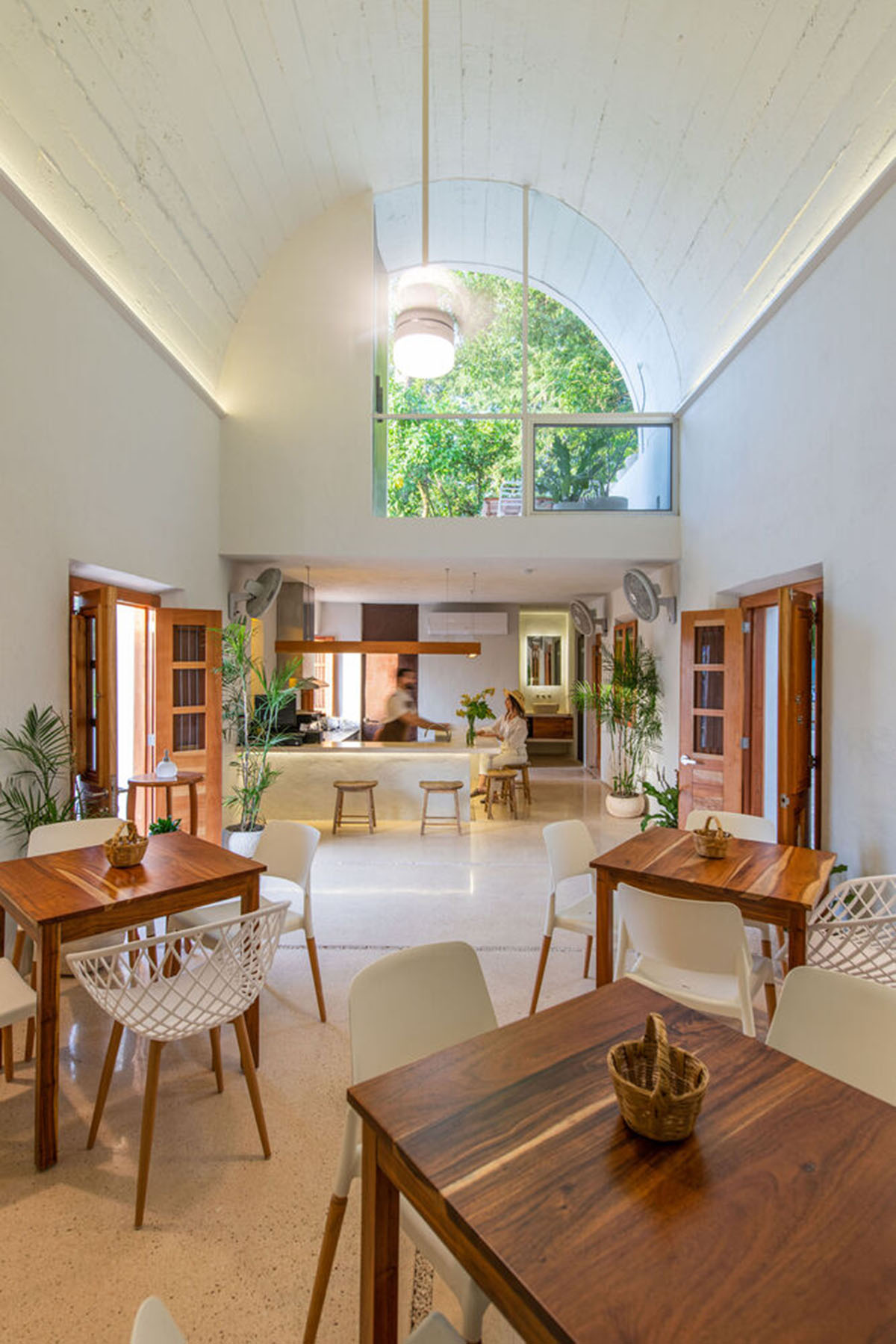 The main access is extended to the covered area as well as a flat slab over the service area that supports an open terrace at the top, from which a new way of appreciating the public square is generated.

The two-storey house contains a small secondary floor and an outdoor stair climbing up to a small terrace. The terrace also includes service tables for customers. Inside of the restaurant, guests can see a large clerestory which has a double height with vaulted part. 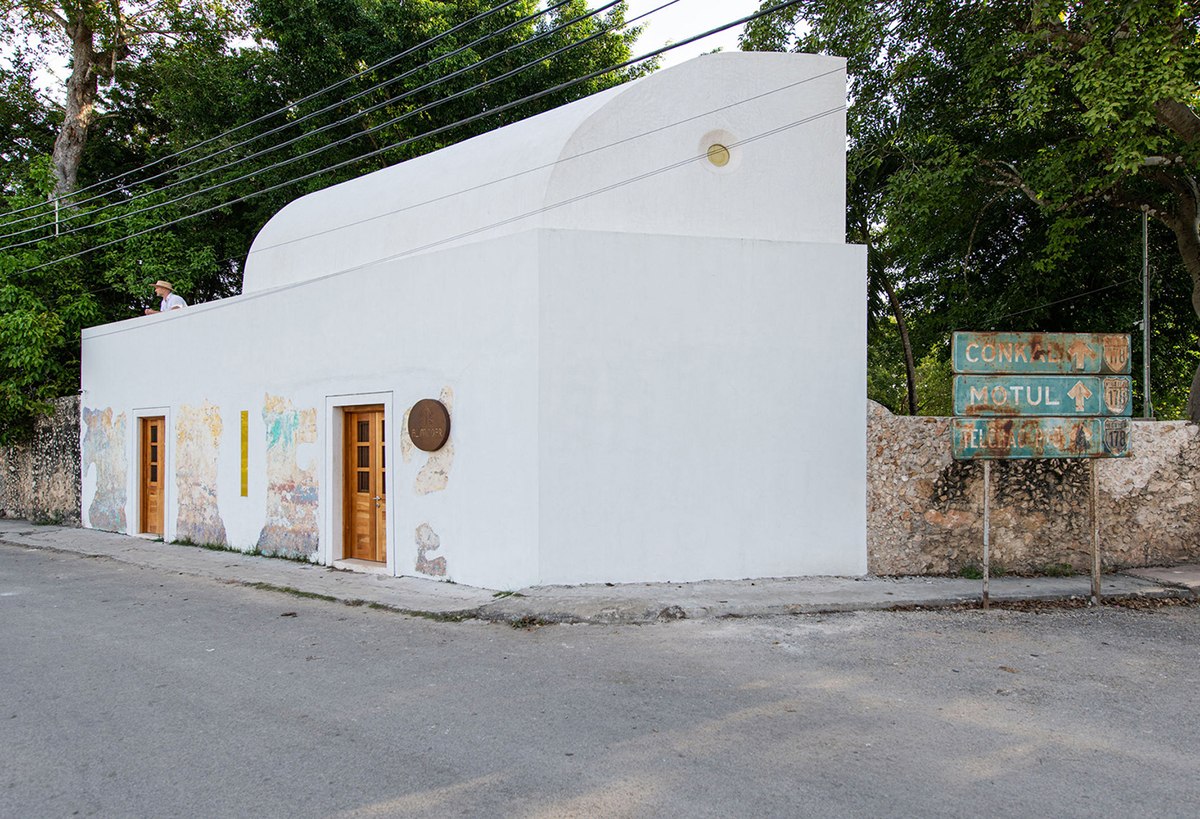 "In the overlapping of the slabs, a north-facing window is created that evacuates the hot air, introduces light and frames views towards the treetops," added the firm.

"Both the vault and the murals on the façade, made from the scraping of layers of paint that it has received during its history, refer to the vault and characteristic murals of the 16th century Church, cataloged as a Historical Monument, that is located in front of the building."

"85% of the tables are outdoors due to sanitary dispositions." 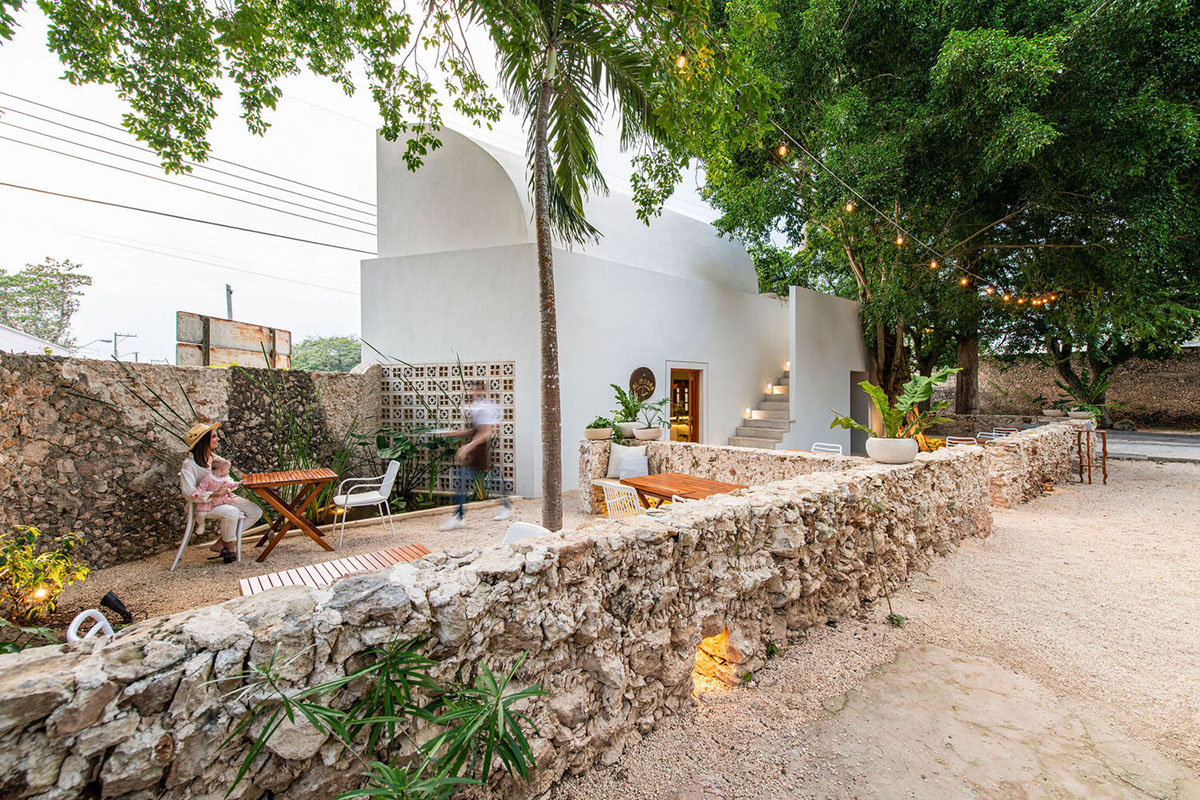 "These are divided between the backyard and the raised terrace. The interior space works with cross ventilation and is made up of a small area for diners, the service bar, the toilets and the storage and support areas," added the studio.

For material choice, the studio used materials that are warm and simple referring to the character of rural Yucatecan architecture. The studio preserved and restored the stucco paintings of the original walls. 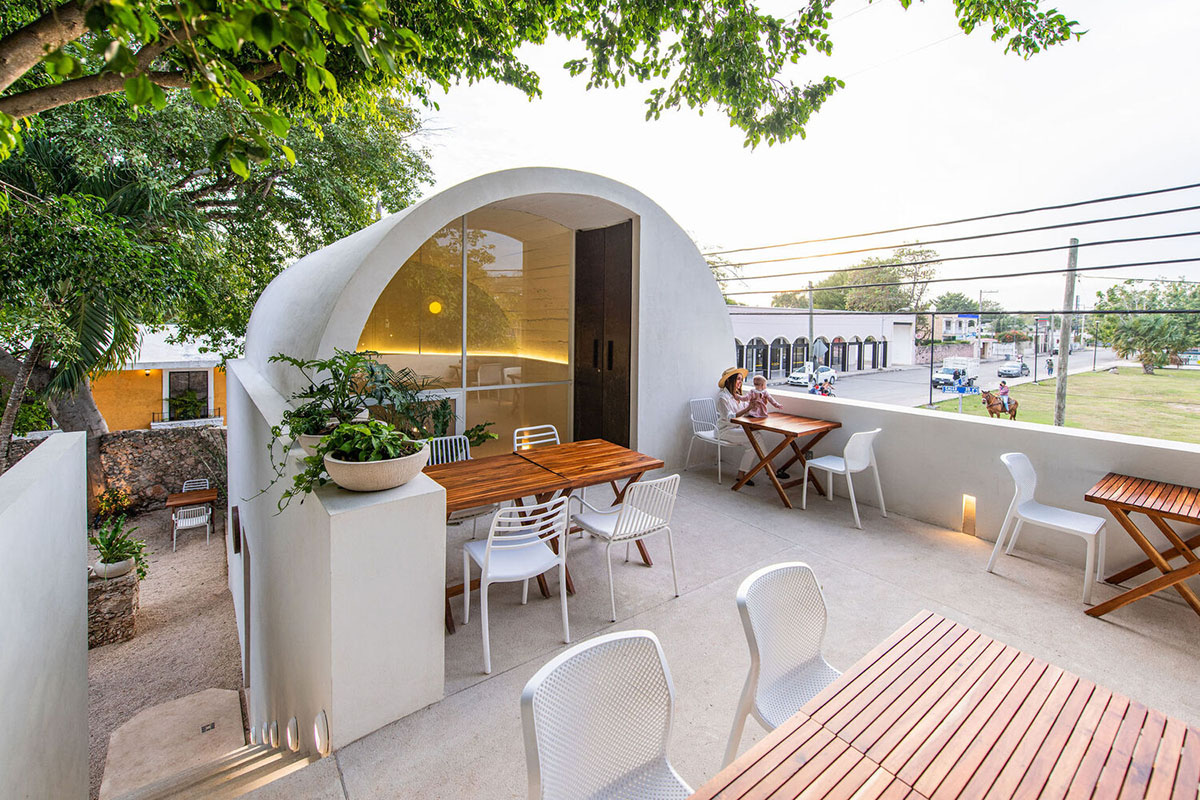 "The lower bed of the vault exhibits the concrete of its structure, colored with the same paint as the rest of the building, while on the outside of it a burnished stucco with integrated pigment in the same tone was applied, as well as in the frames of the recovered openings," added he studio. 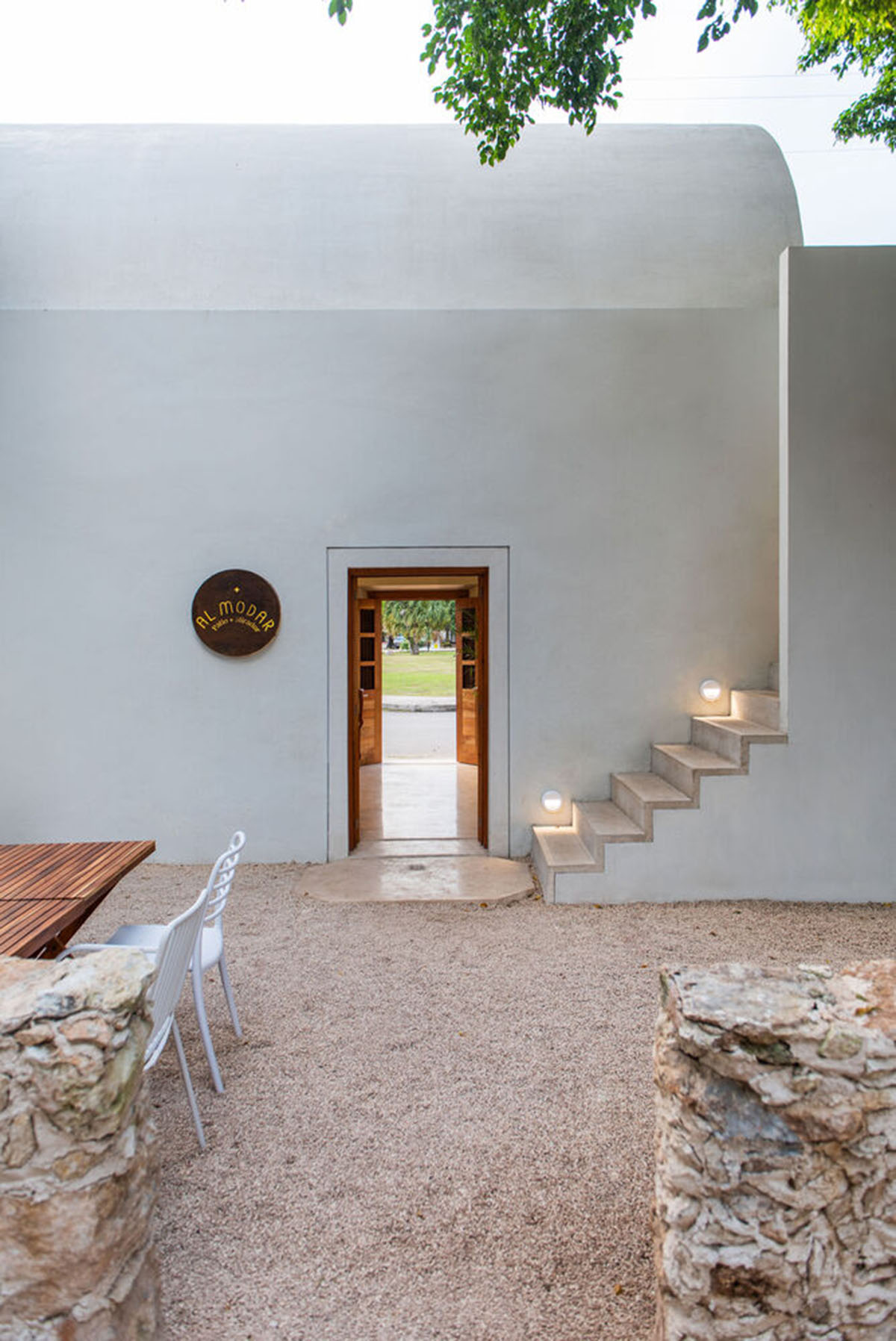 The interior floors are made of devastated white concrete with ecocrete joints to release moisture from the floor. Non-slip hammered concrete floor was laid on the raised terrace and staircase. The architects created a leveling for the backyard with local walkable and permeable gravel. "In the same way, blacksmithing elements with encapsulated oxide, stainless steel, apparent concrete lattice, stone blocks from the region, transparent glass and yellow screen-printed glass were used," the team added. 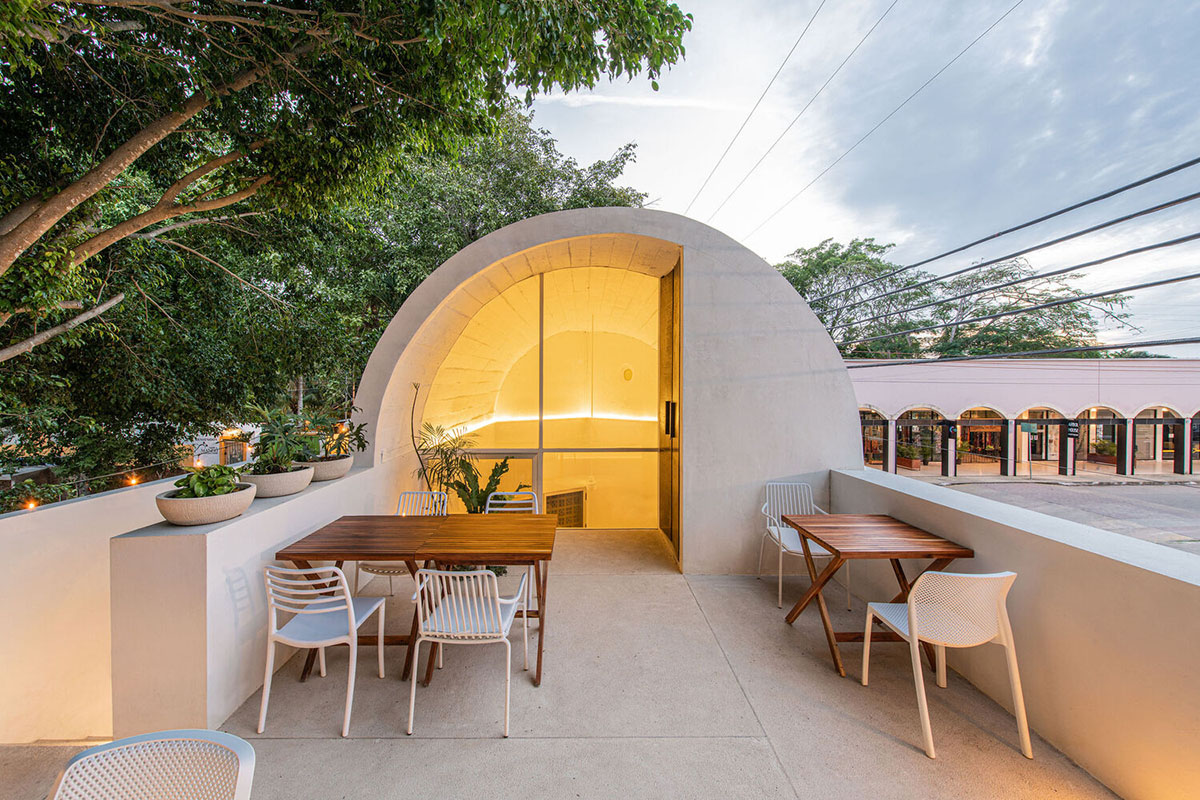 The studio used cedar hardwood and regional Tzalam for doors and tables (respectively) while the chairs were made of white plastic. The landscaping takes cues from the aesthetics of Mayan plots that stimulates the senses. 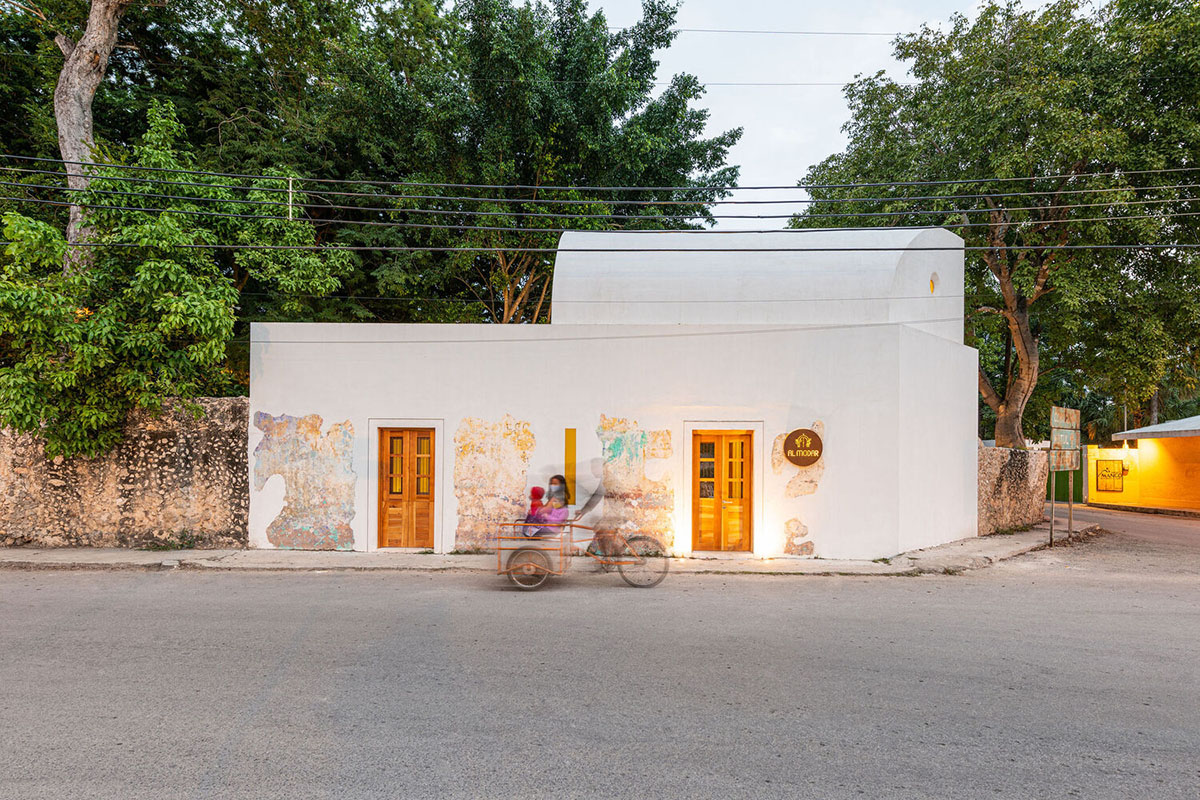 "The plant proposal dignifies the pre-existing trees and is consolidated by means of concrete pots, produced in the locality with endemic vegetation, concrete benches attached to the stone low walls and a water garden with a recirculation fountain," added the architects. 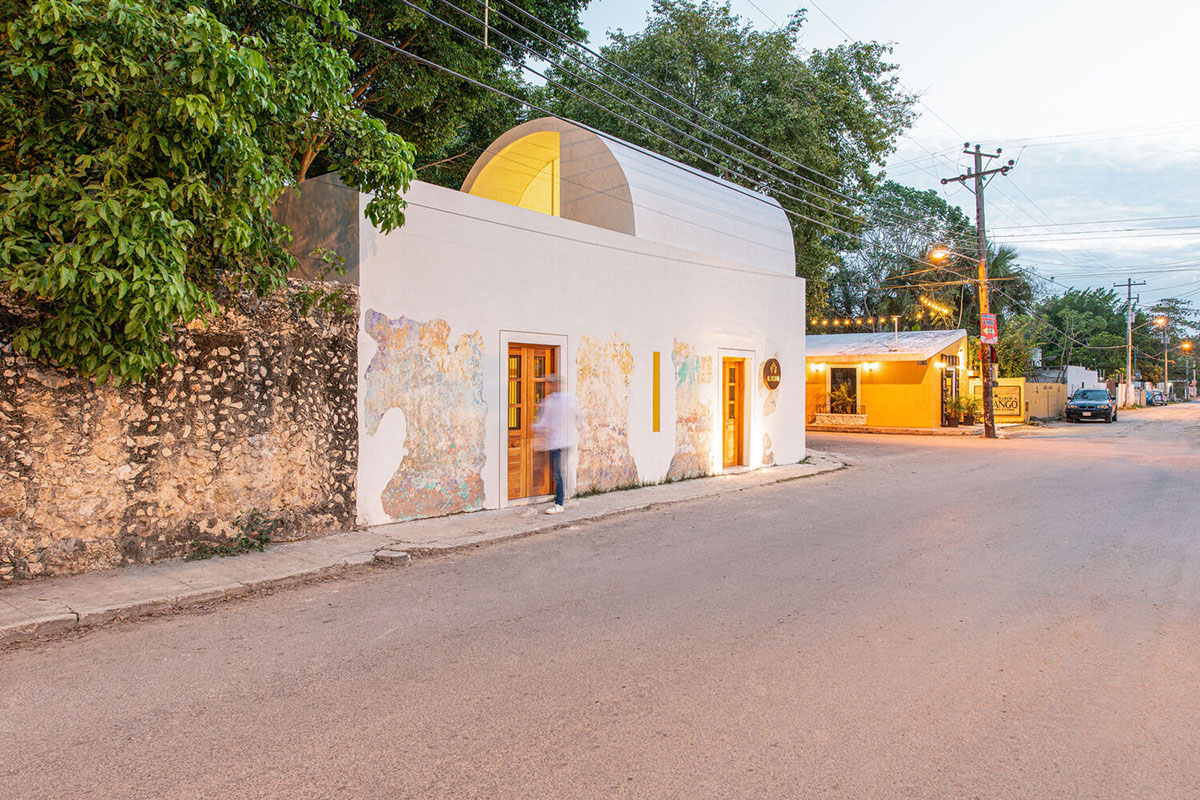 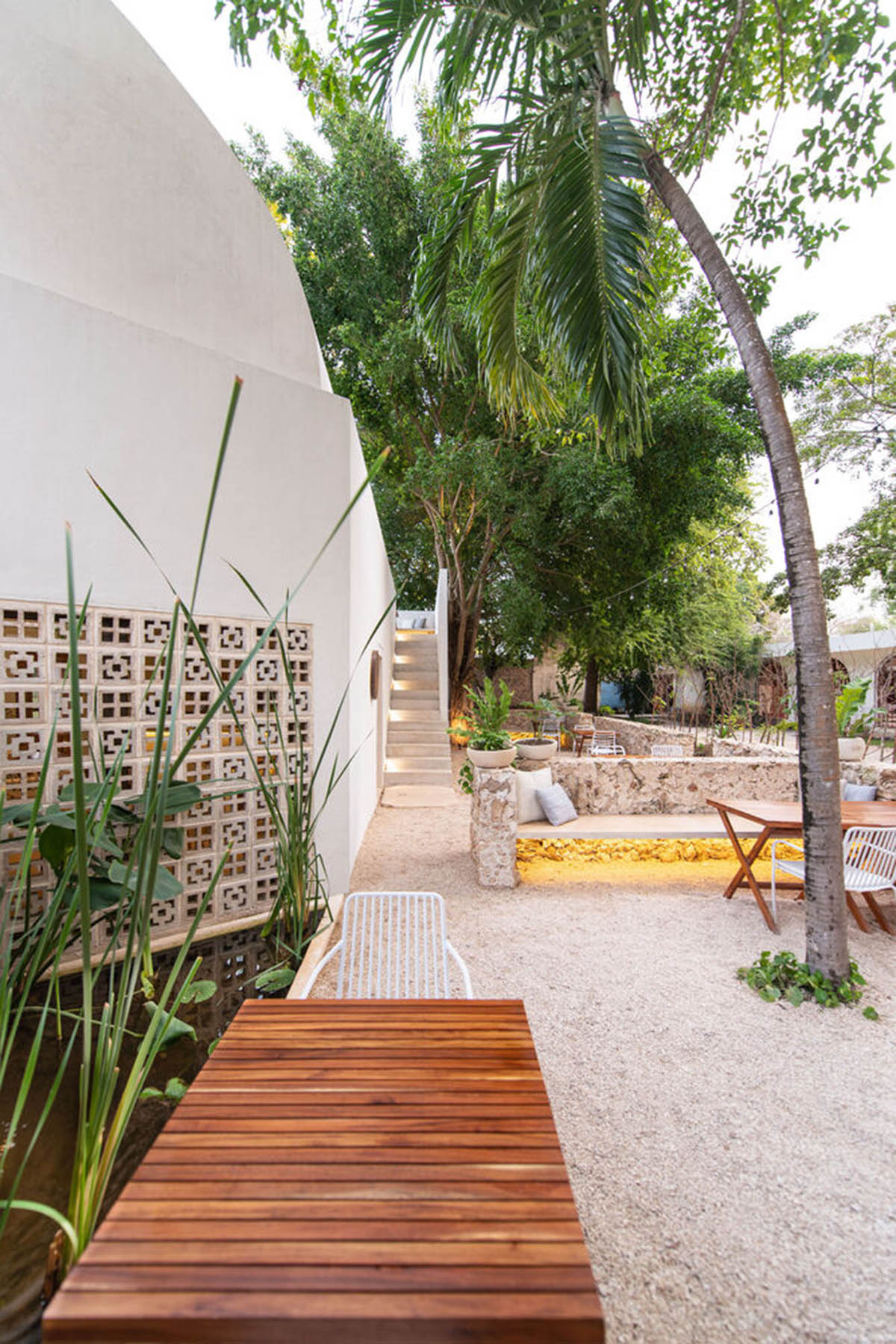 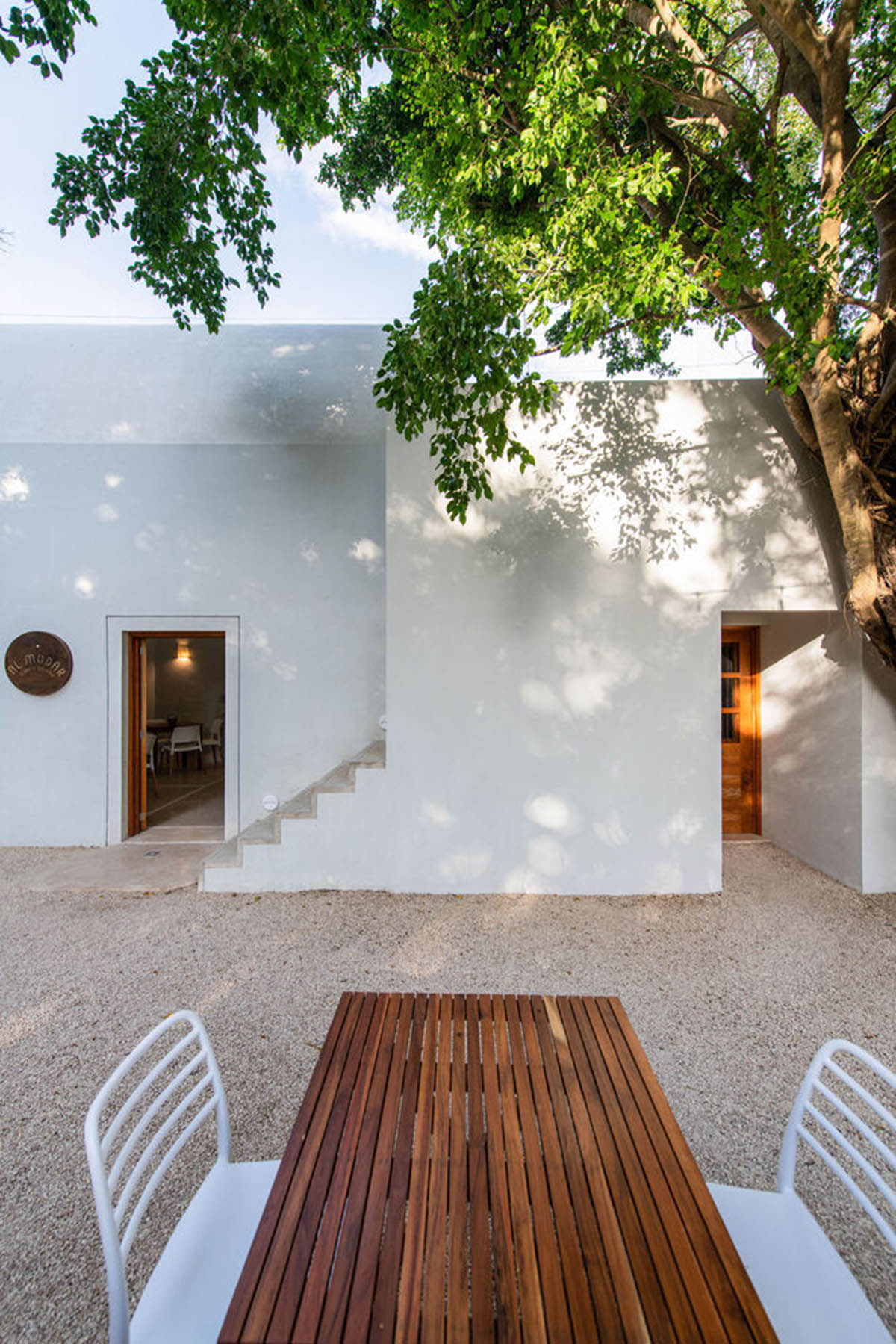 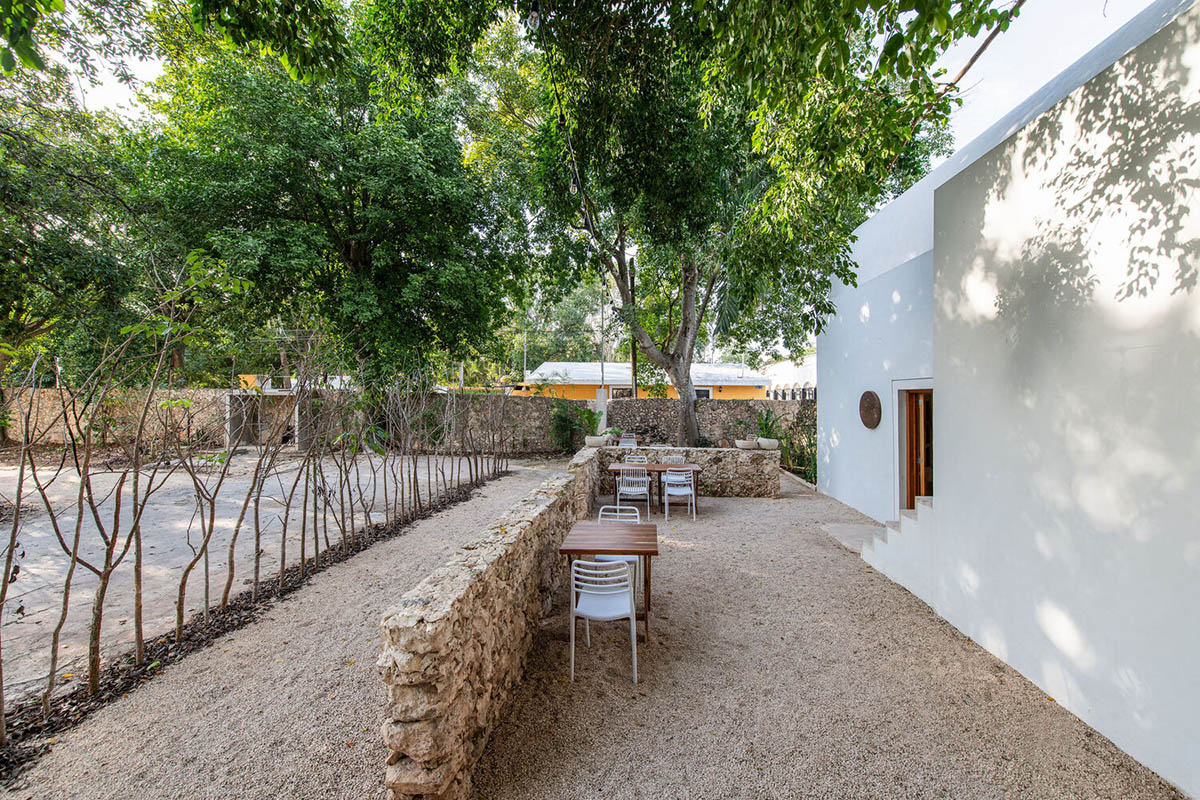 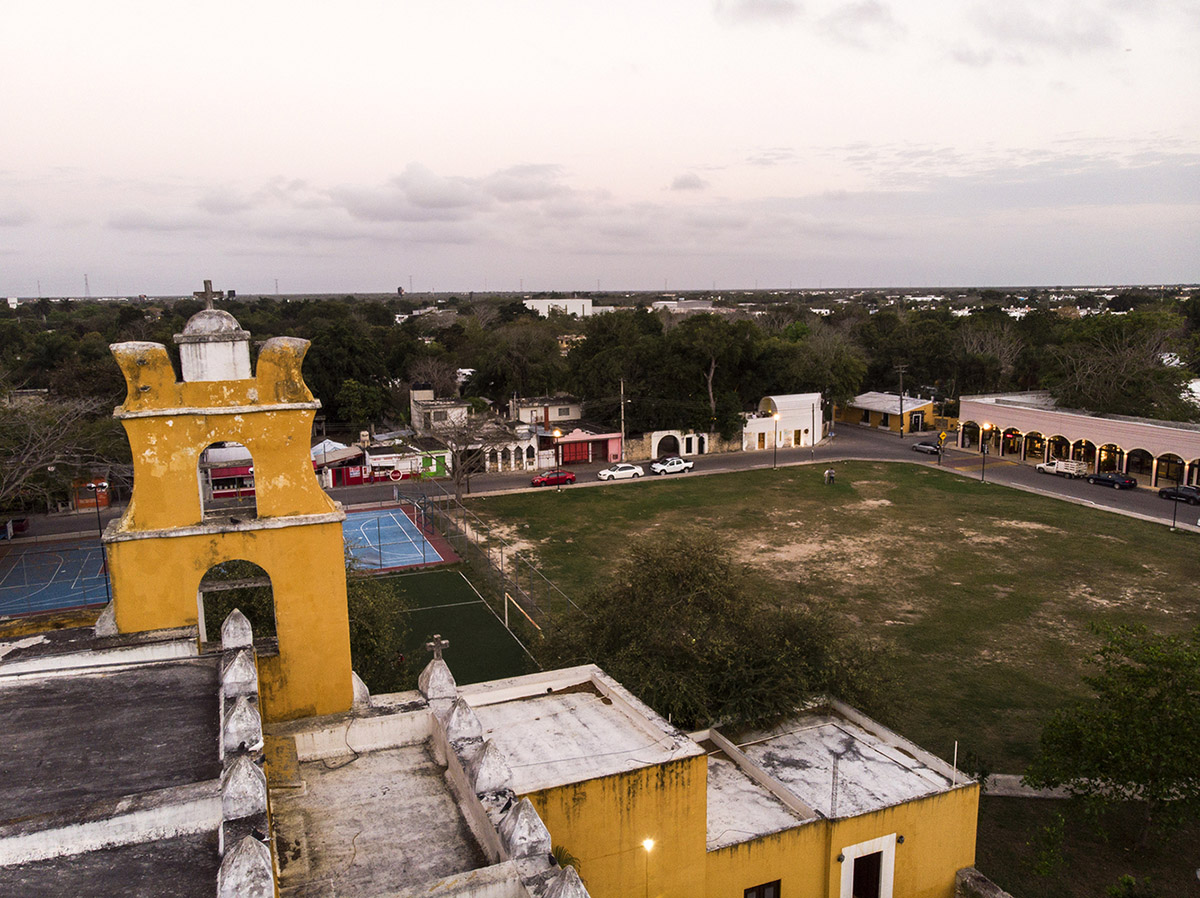 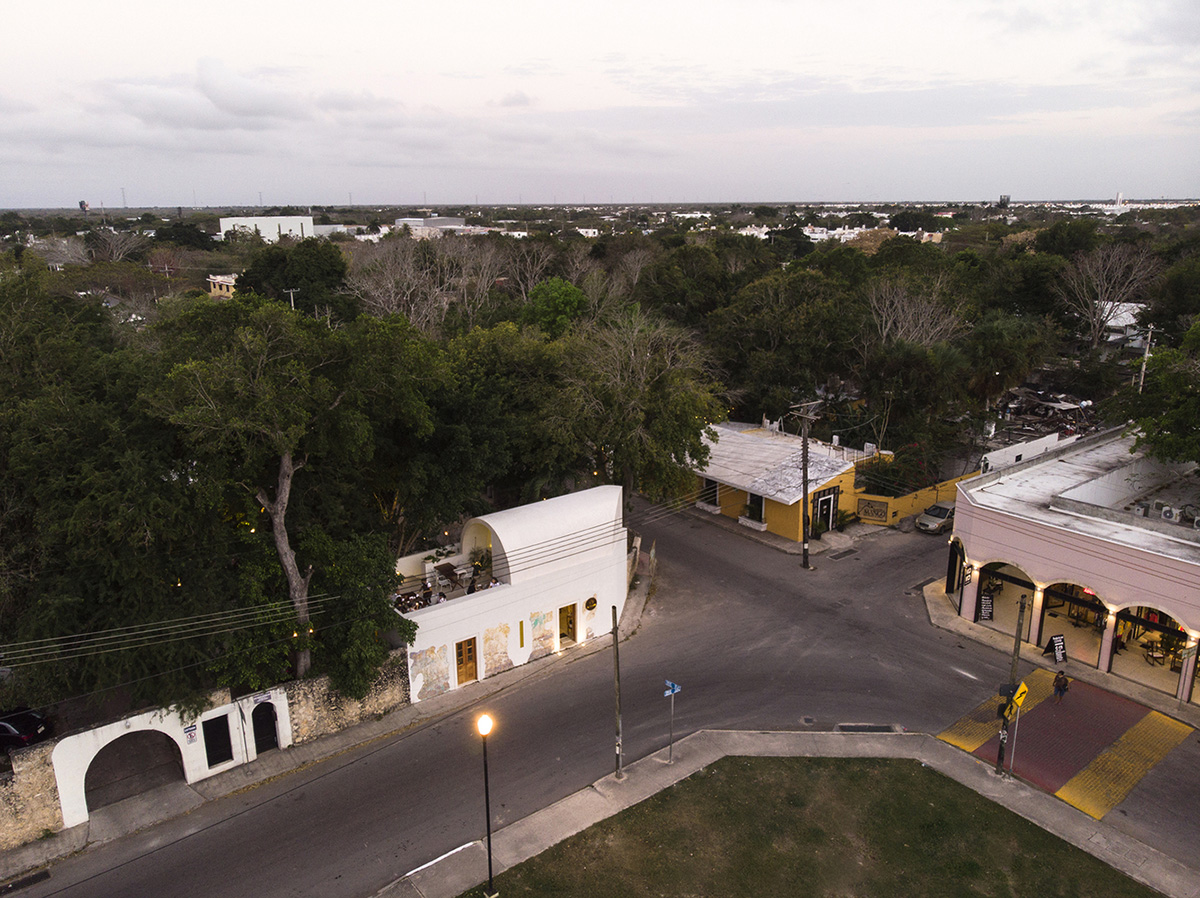 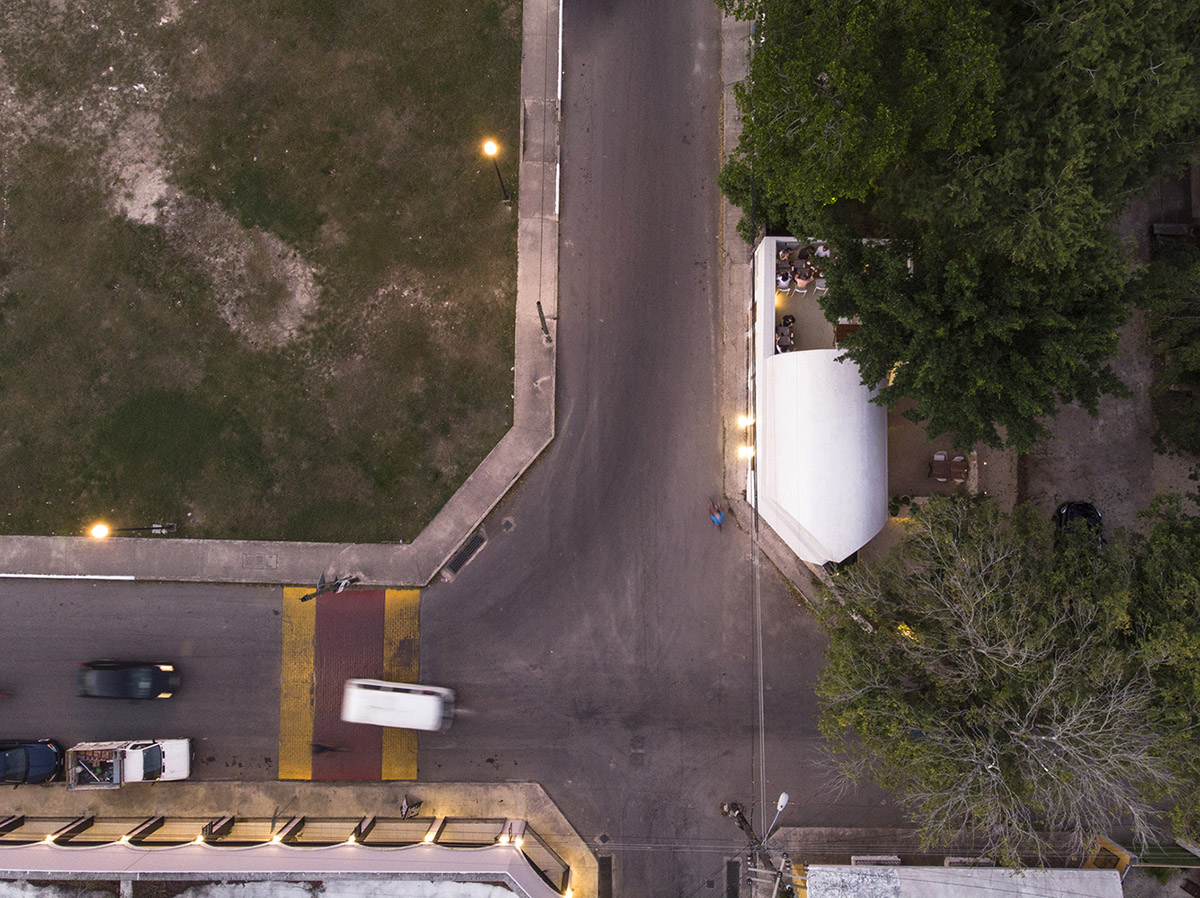 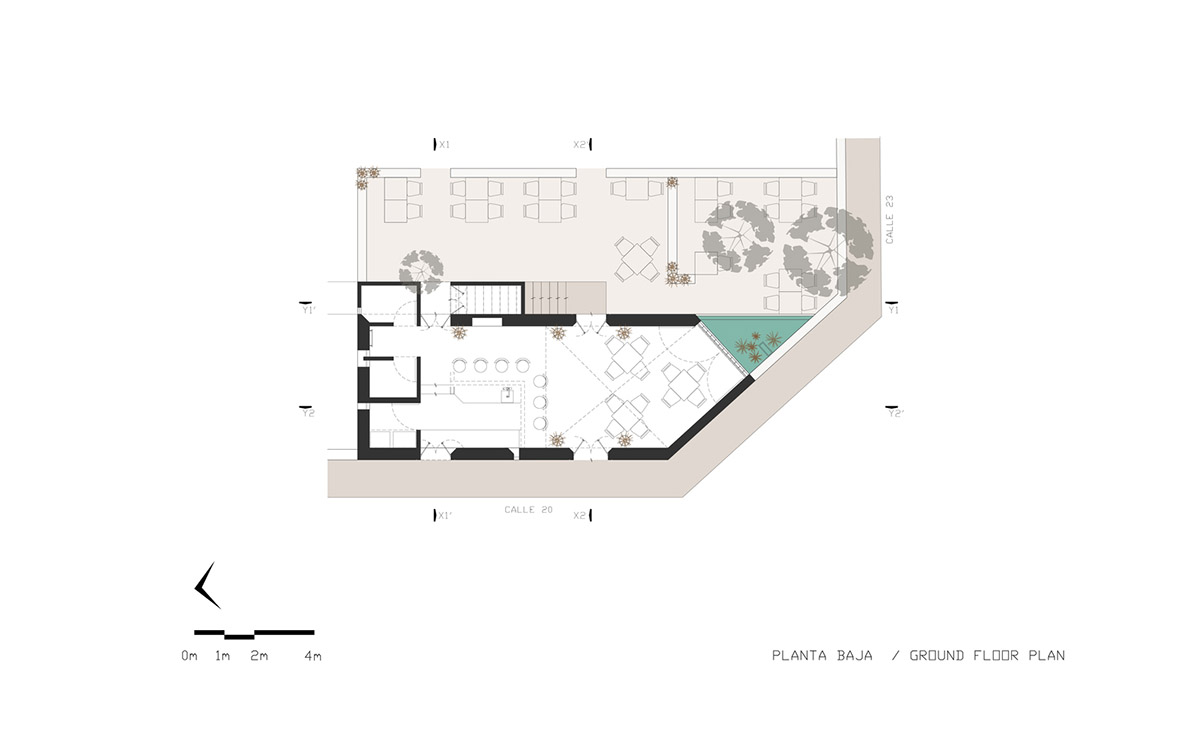 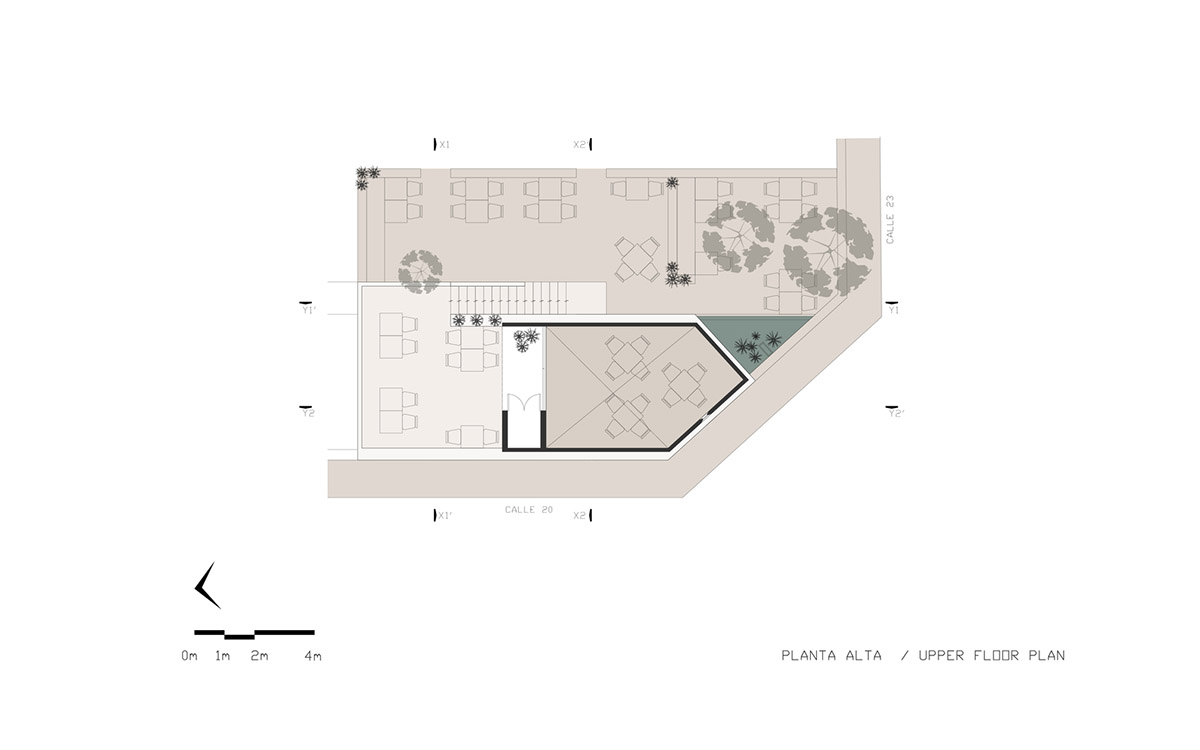 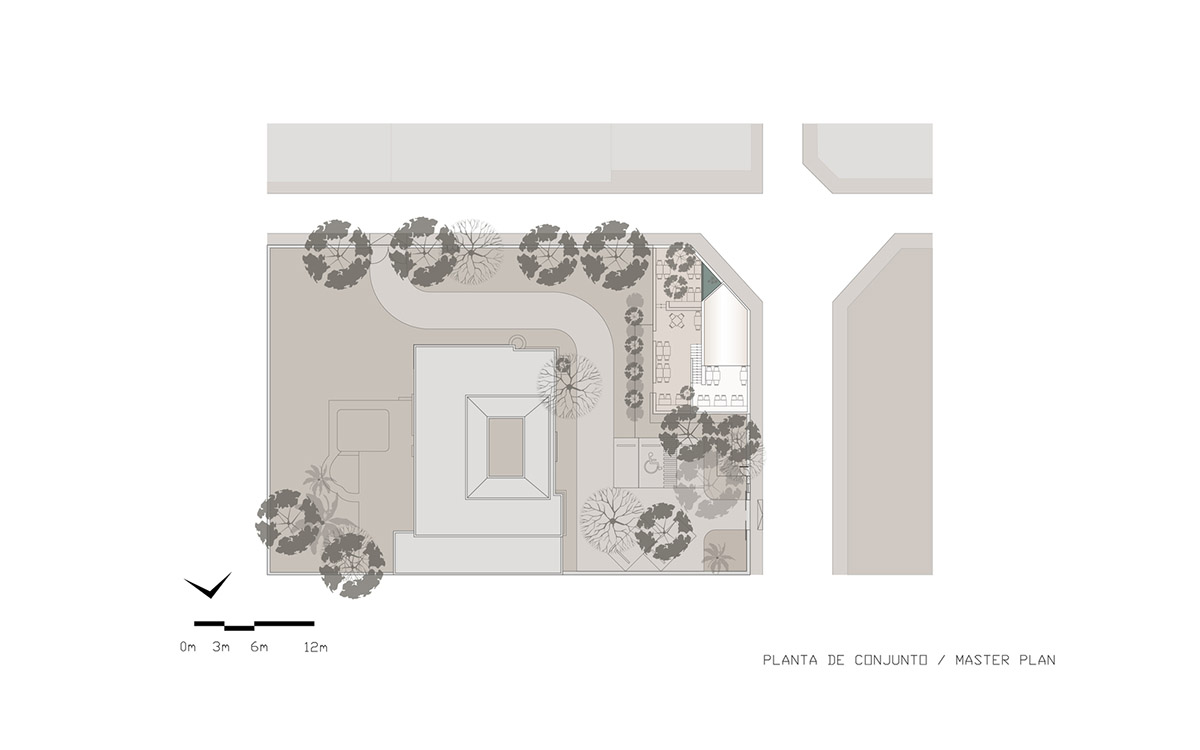 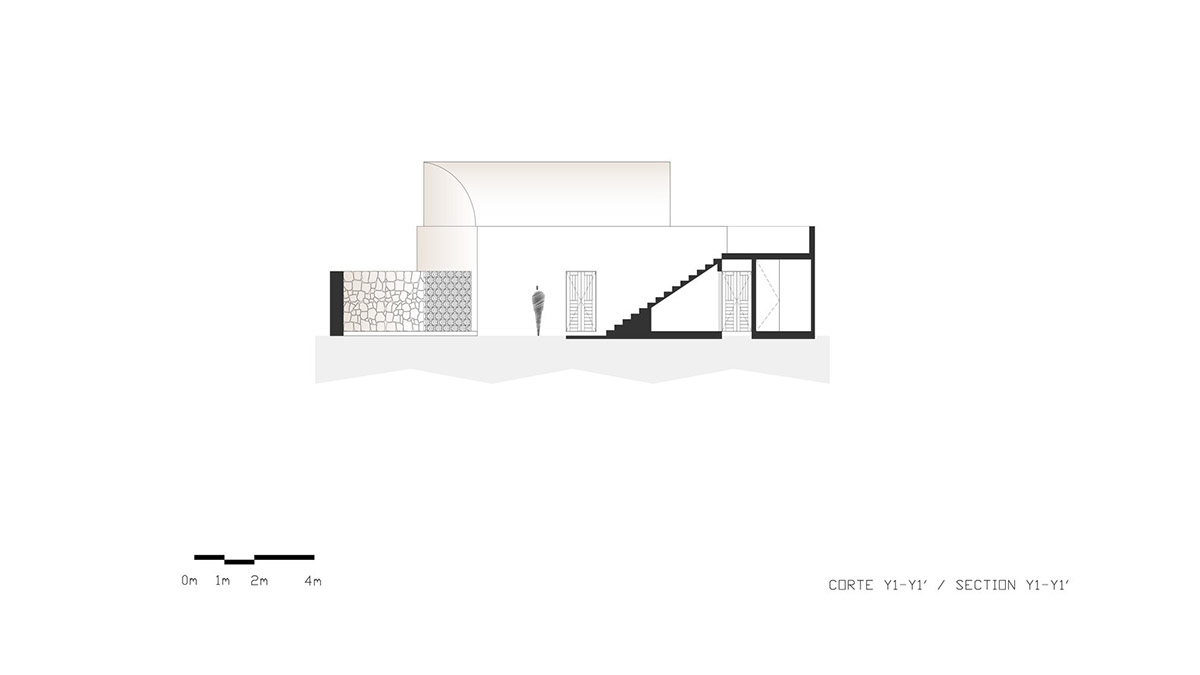 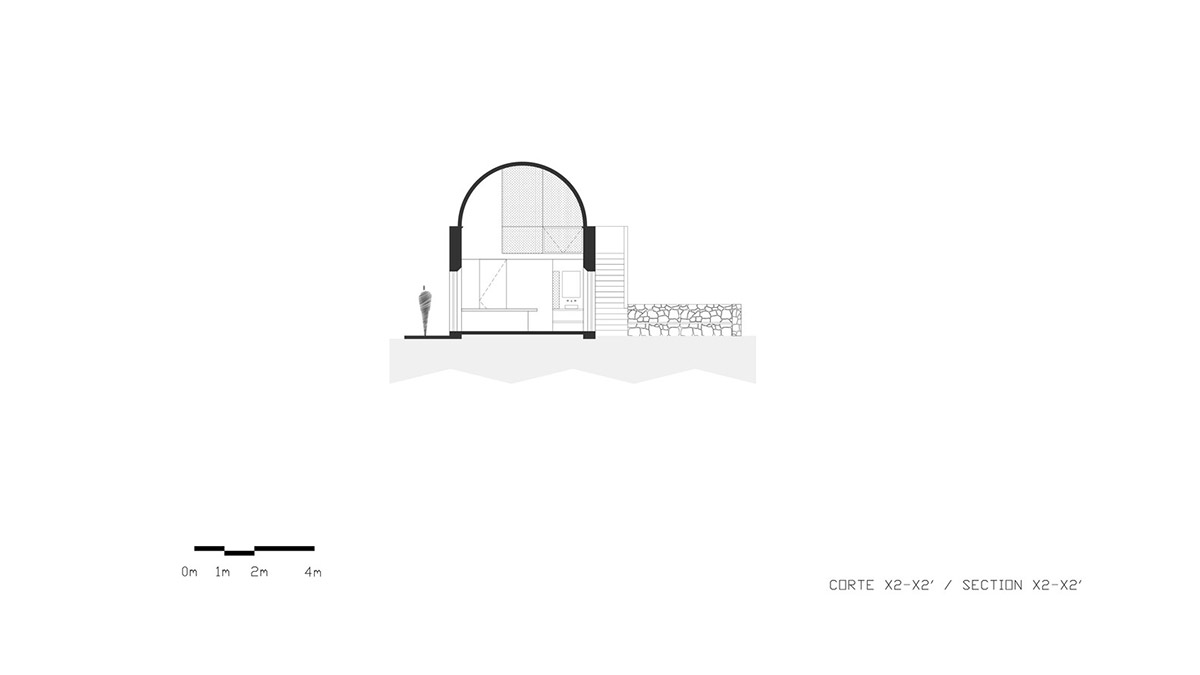 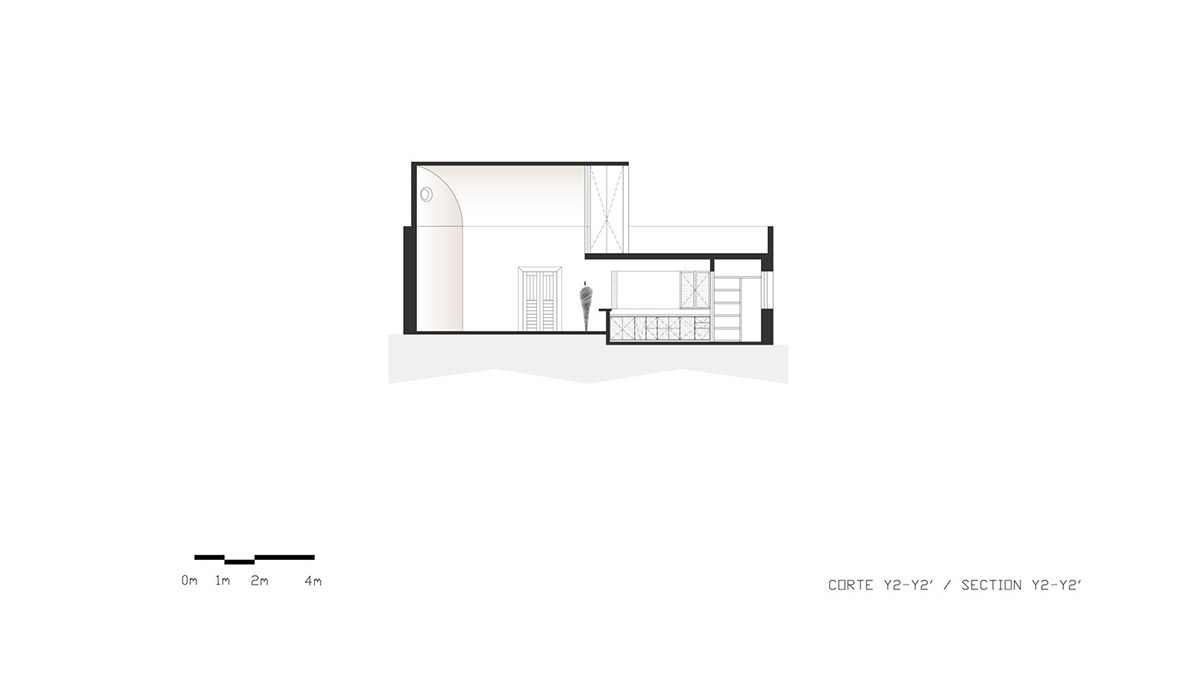 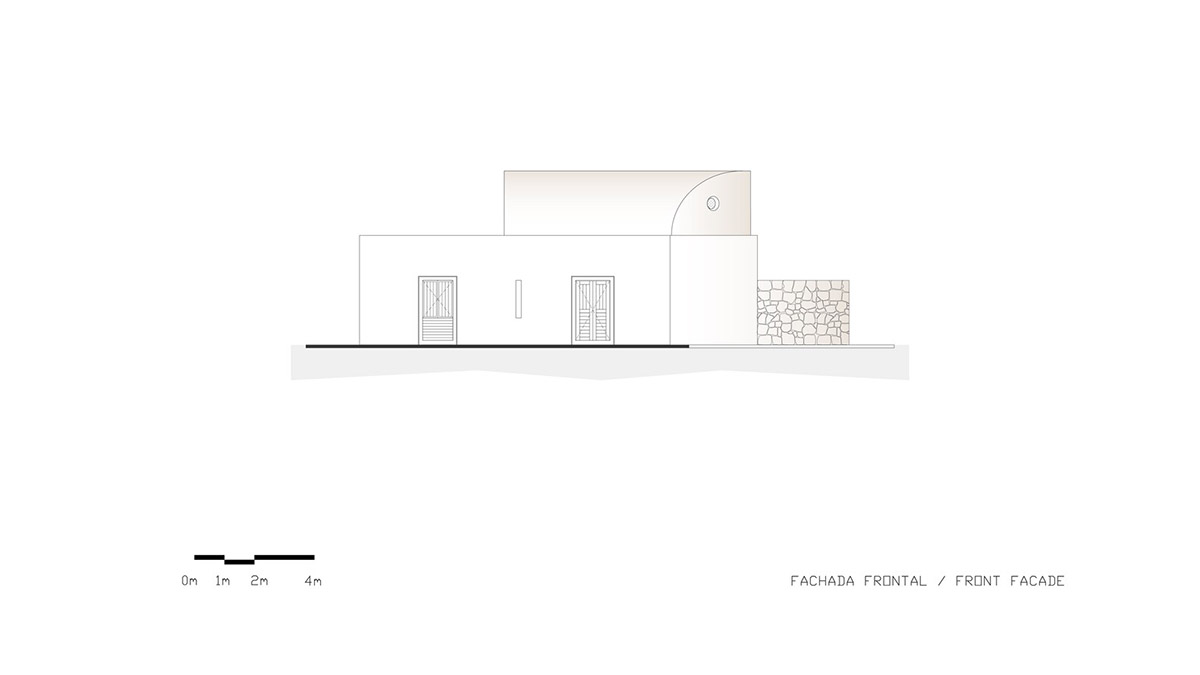 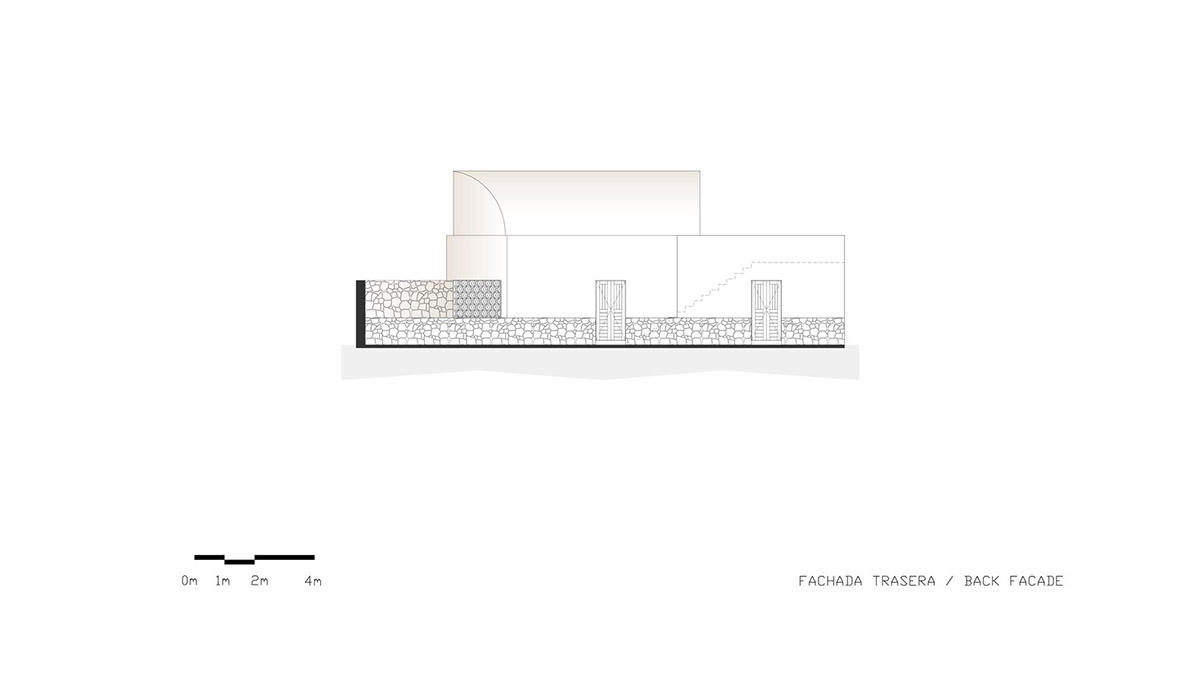 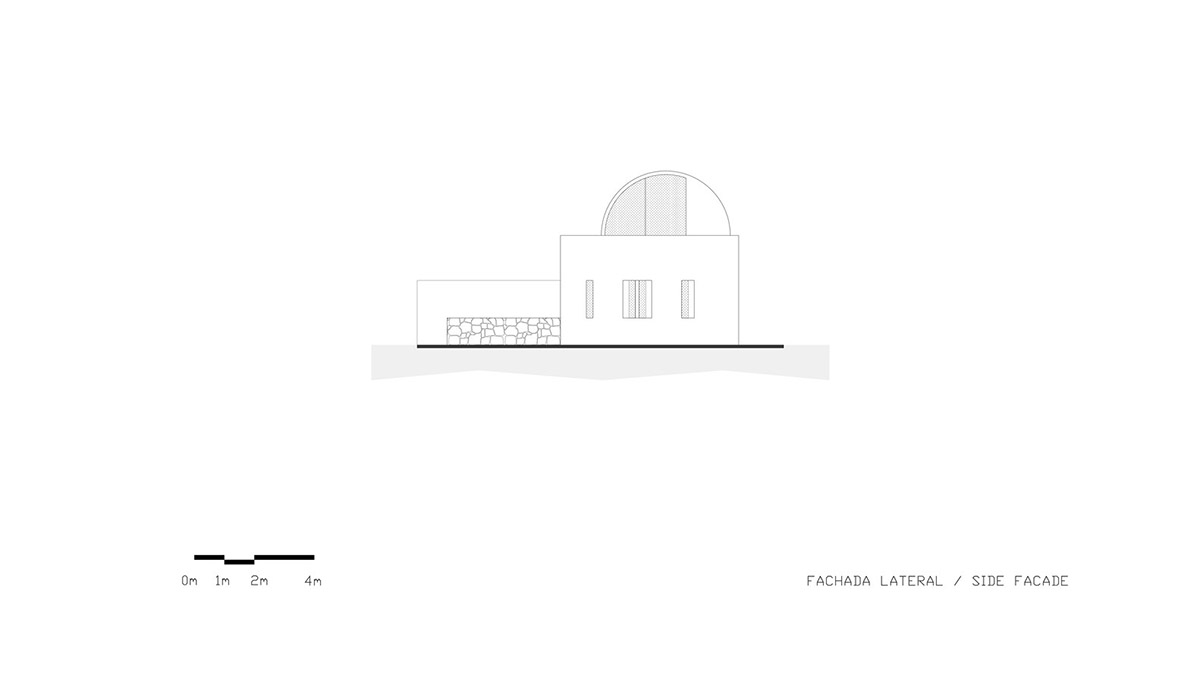 TACO previously completed Lake House (or Casa del Lago) in Merida, Mexico and completed a vacation house in the middle of a wild nature of Mexico.