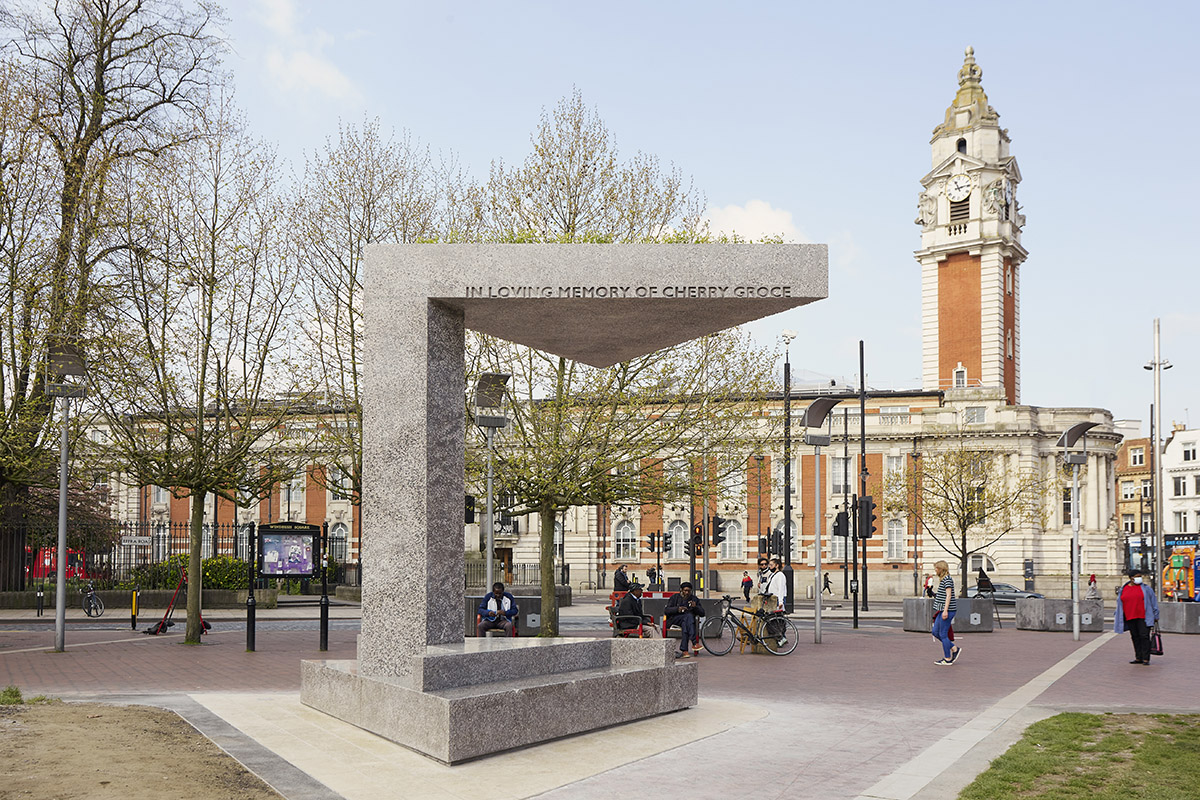 Adjaye Associates has completed a triangular memorial honouring Cherry Groce, who was shot in her home by the Metropolitan Police in front of her children on September 28, 1985.

Named Cherry Groce Memorial Pavilion, the memorial was officially opened to the public on 25th April 2021 at a ribbon cutting ceremony in Windrush Square, Brixton.

Adjaye Associates revealed its preliminary design in 2020 and the memorial, also conceived as a pavilion, was completed in less than a year. Adjaye's design is comprised of triangular elements: a triangular roof and triangular plinth for seating - which provides a small-scale shelter for the community. 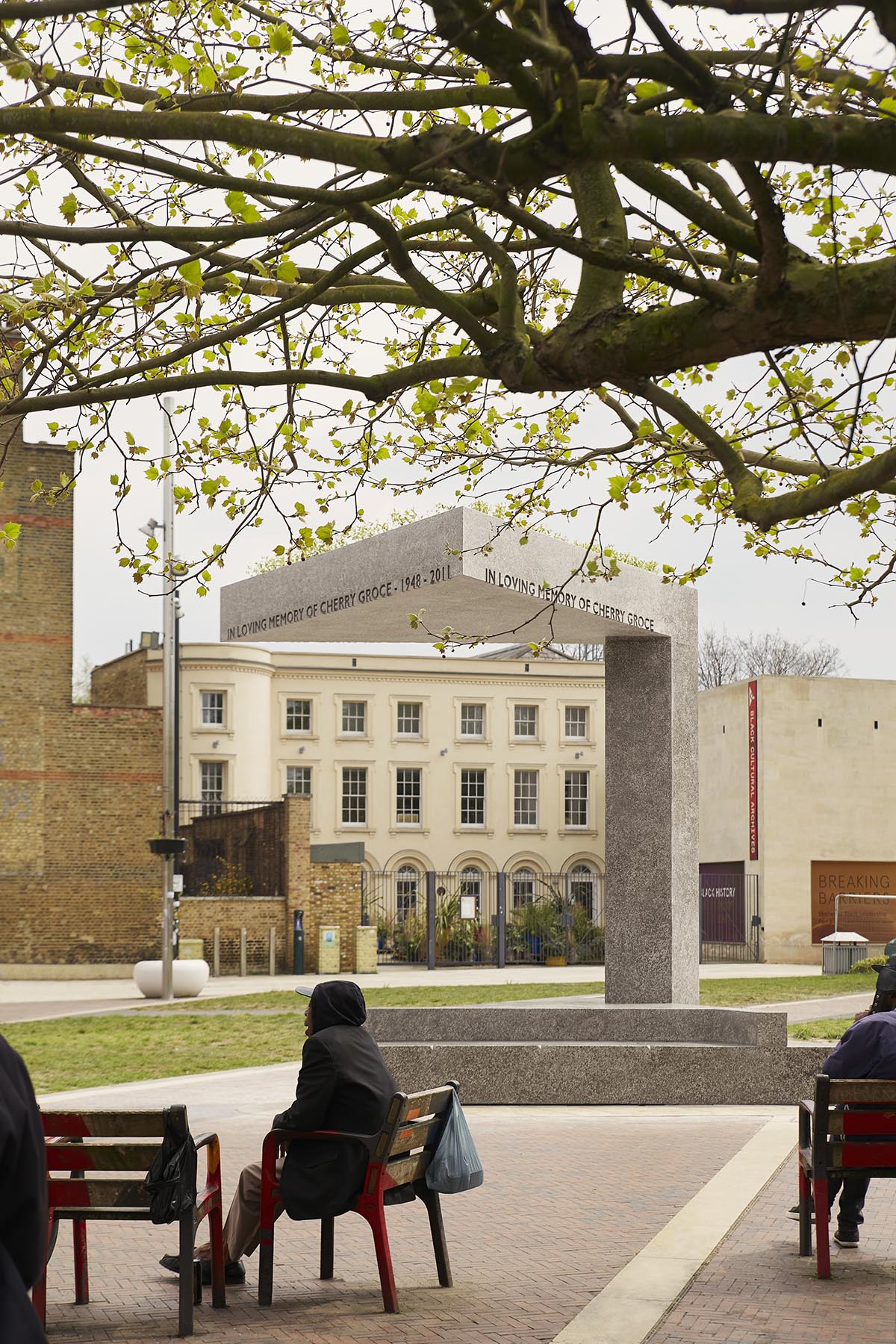 "I am honoured to celebrate the unveiling of this project and the representation it brings to the black community for Brixton, London, and the UK at large," said David Adjaye, founder of Adjaye Associates.

"It is my sincere hope that the restorative justice that is borne from the making of this pavilion can help us all learn from and be better neighbors to each other in the city that we live in."

Paralyzed by the shooting, Cherry passed away as a direct result of her injuries in 2011. The 35 years since the shooting is a story
of a family and community working together in the pursuit of truth and justice, refusing to accept that this is simply how our society works. 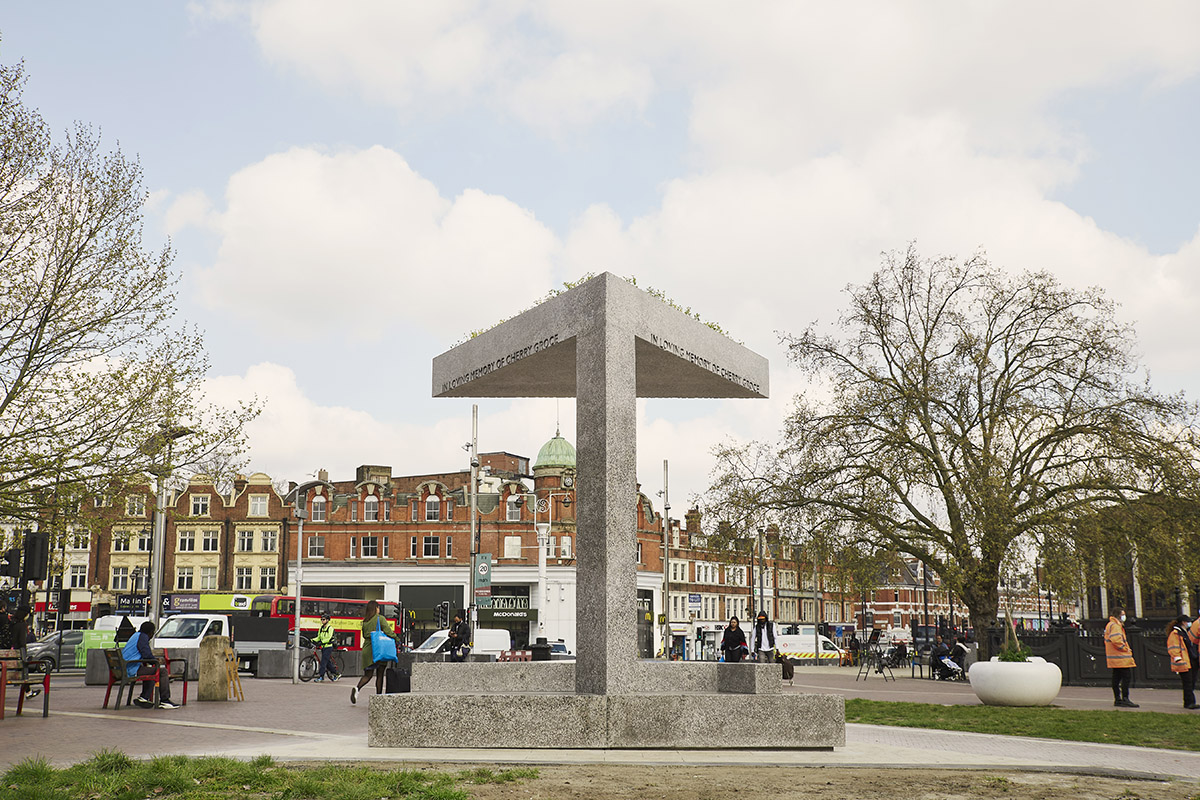 Commissioned by the Cherry Groce Foundation, in this project David Adjaye aimed "to create awareness and understanding of the life, strength, and experience of Cherry Groce and her family."

"It’s been a long time coming and happy to see all the hard work, dedication and commitment from all involved including donors, come together. It’s a wonderful feeling and a honour to have such a significant memorial embedded in Brixton where we and many other black people called home, as well as the place where we experienced so much of our struggles," said Cherry’s son, Lee Lawrence.

"So to have this Memorial dedicated to my mother Cherry Groce and a community who rose up for the terrible injustice which happened to her and subsequently us is the greatest gift I could give to her in her absence." 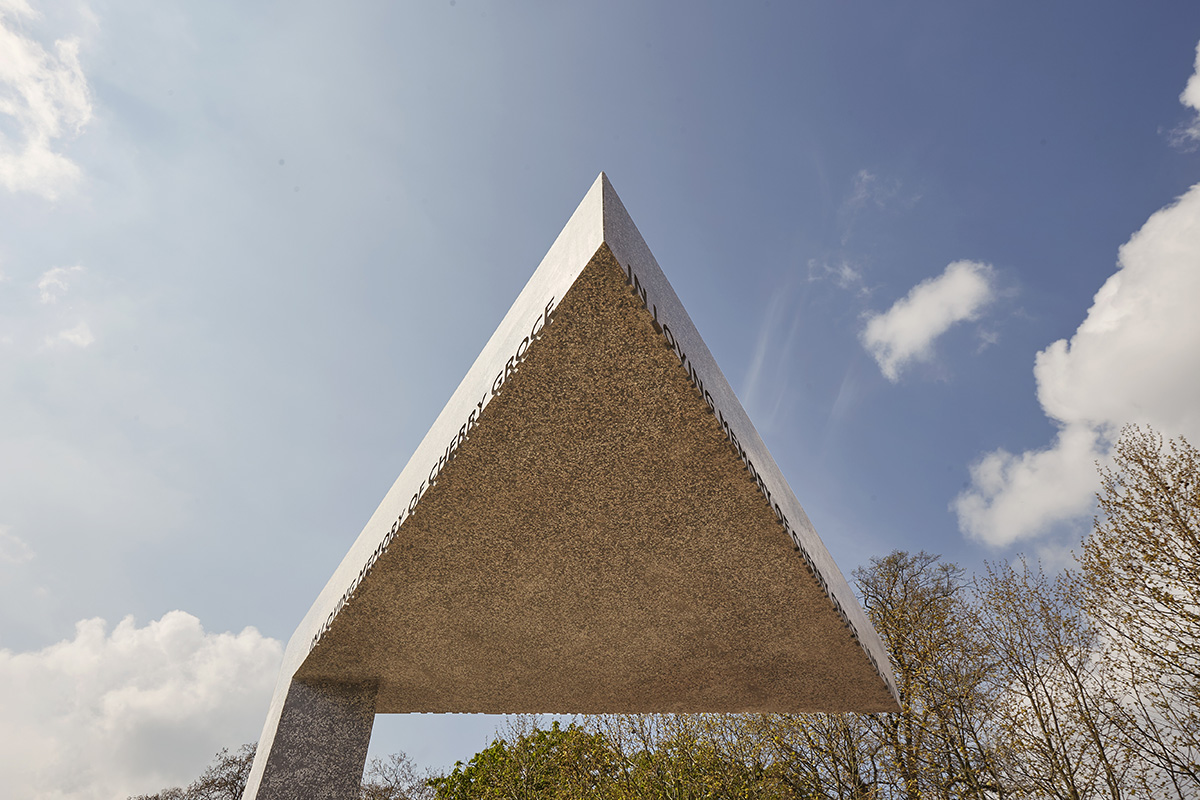 "I am honoured to celebrate the unveiling of this project and the representation it brings to the black community for Brixton, London, and the UK at large, added David Adjaye.

"It is my sincere hope that the restorative justice that is borne from the making of this pavilion can help us all learn from and be better neighbours to each other in the city that we live in." 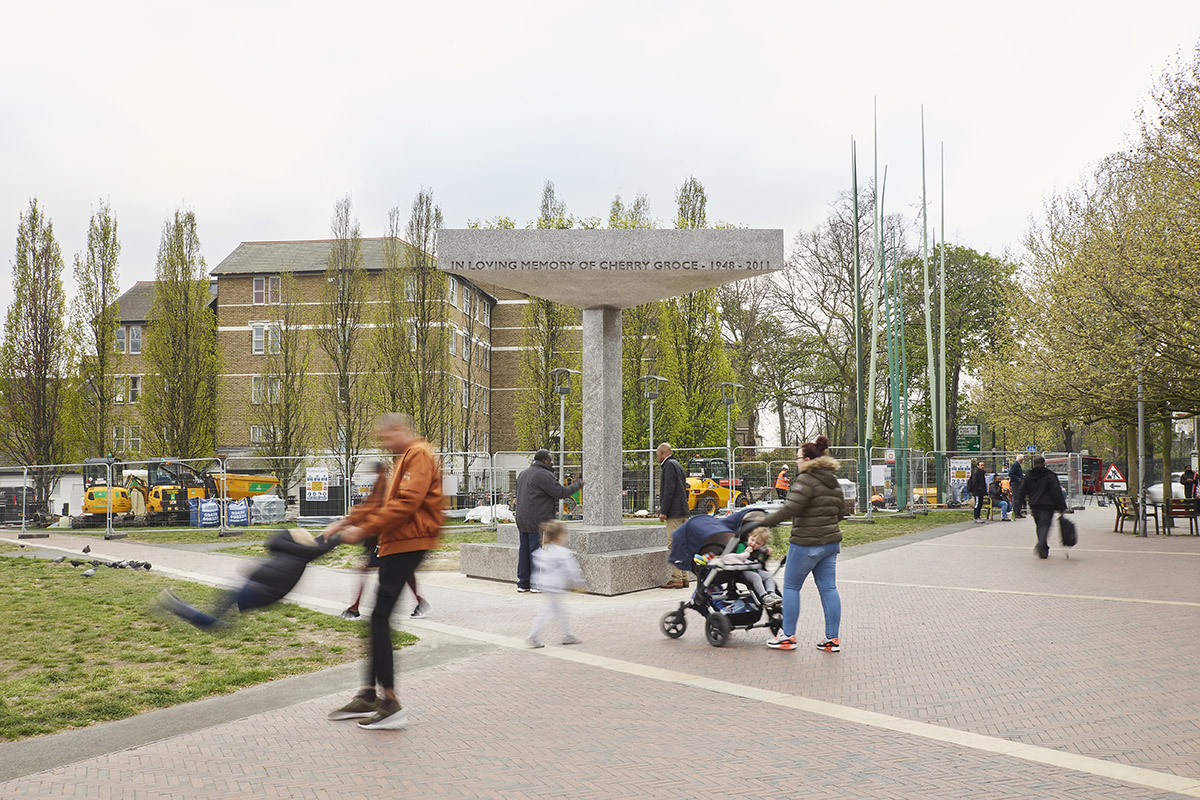 Adjaye envisioned the structure not only as a memorial but as a pavilion for the community, the design complements the existing features of Windrush Square, the angular forms of the landscaping and lawn areas and the neighbouring Memorial to African and Caribbean soldiers.

The use of a single column represents Cherry’s strength and support of her community. Integrated benches enhance the functionality allowing the community to engage with and benefit from the memorial pavilion. 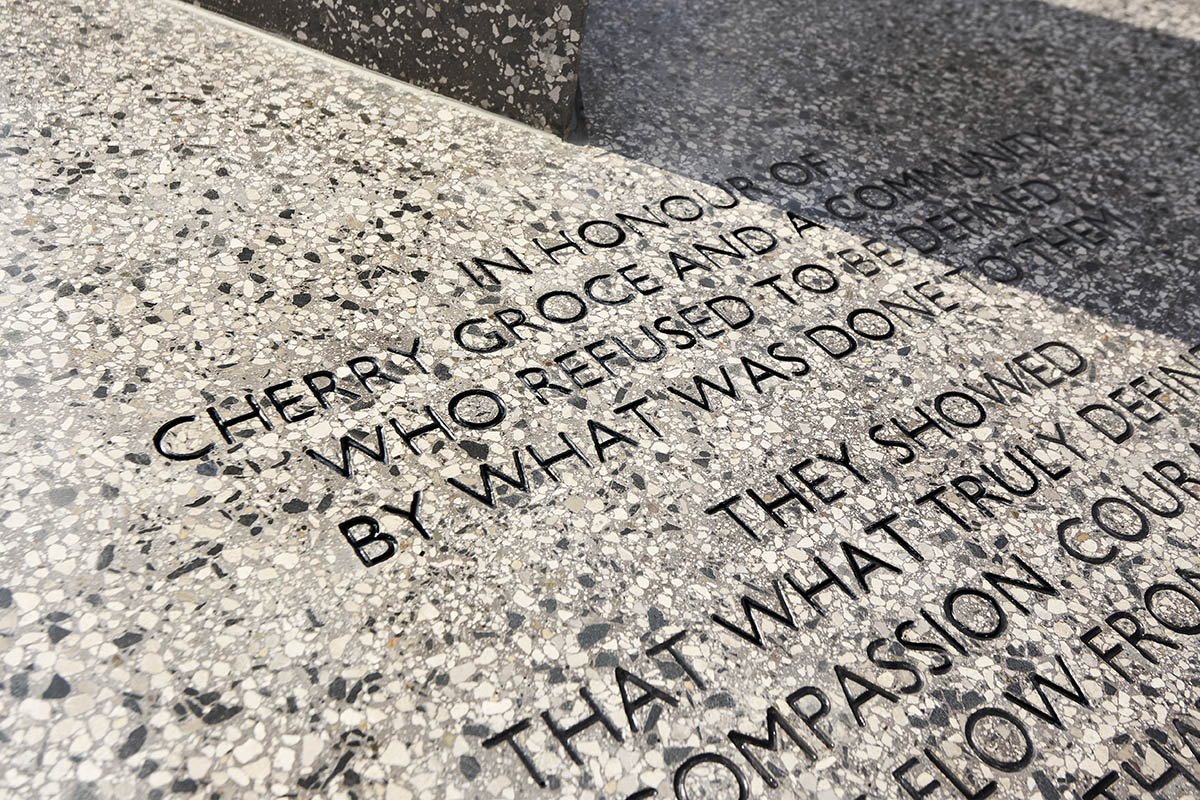 "The roof speaks to the protection and shelter of the Brixton community while its planting serves as a reminder of change, growth and optimism," said Adjaye Associates. 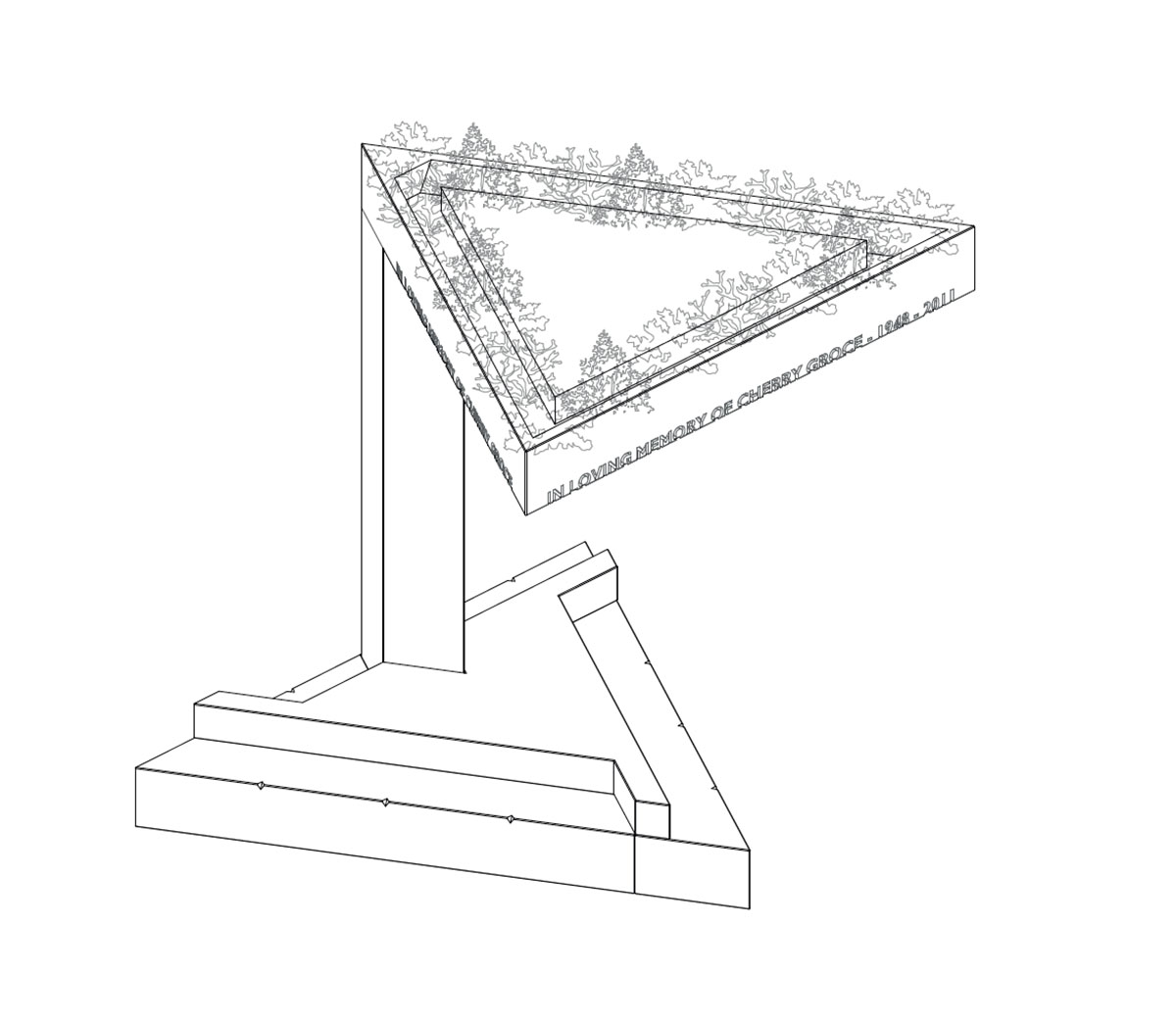 Adjaye Associates is currently working on the Edo Museum of West African Art in Nigeria and a new memorial in Niamey, Niger.